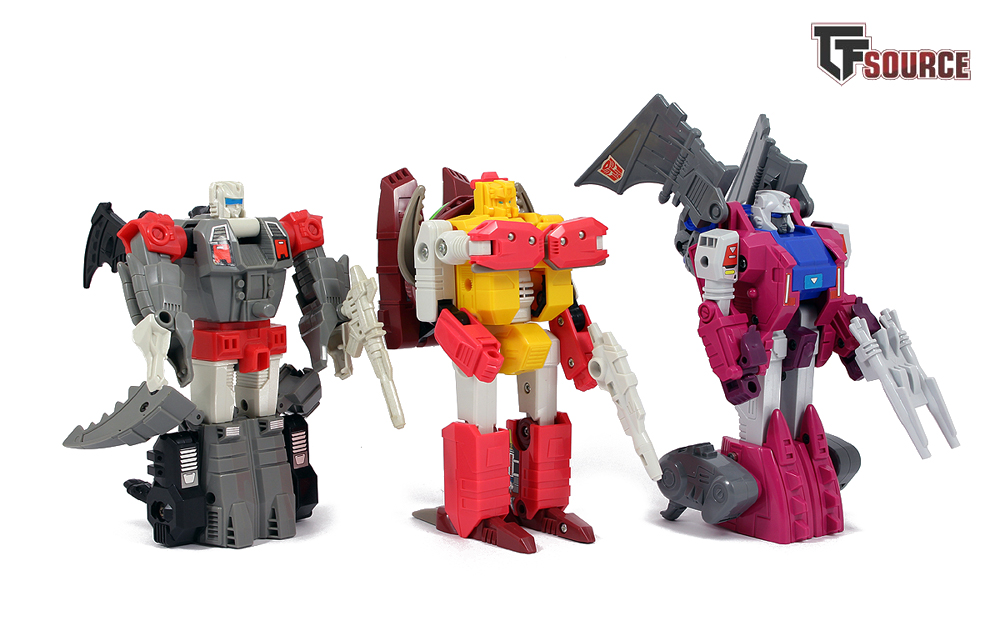 Discovering overlooked parts of Generation 1 is a finite experience for me, but one that I treasure and value, because of how quickly it can be over forever. The 1987 Autobot Monsterbots are one of the most bewilderingly pleasurable discoveries I have made in the last year, toys that I had mentally written off as not for me, and mistakenly believed to be 1988. It turns out I had even once owned a complete set of the Monsterbots over a decade ago and had completely forgotten about until I dug up photos last week. The Monsterbots – made up of Doublecross, Repugnus and Grotusque – are gems from 1987, the start of the gimmick era and possibly the best year for vintage Transformers ever. 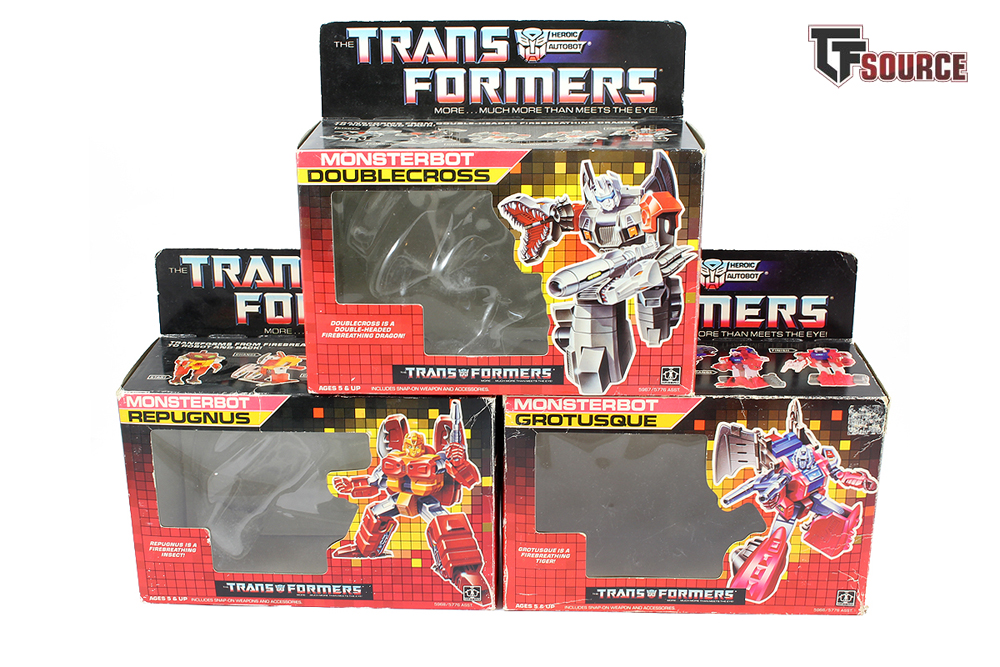 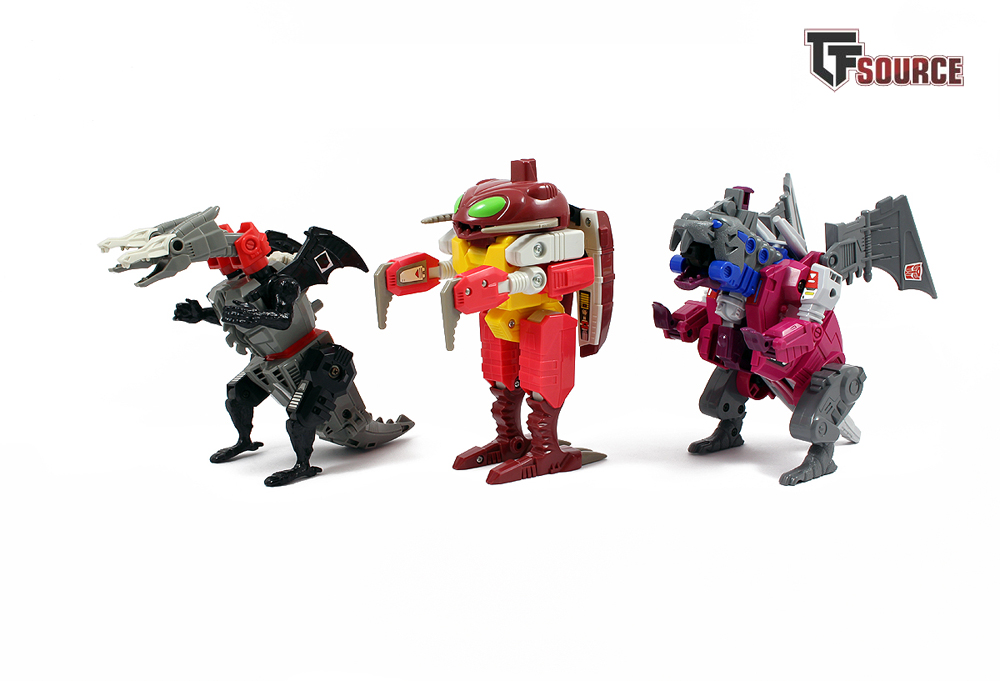 Clearly intended to be vile creatures, or accidents as the TV commercial described them, these are some of the most bizarre looking Transformers that had come out to date. In 1988, things post-Movie got even stranger with the Decepticon Headmaster Juniors, but for 1987 the Monsterbots are right up there with the Terrorcons. They are of course separated from the whole Binary Bonding feature of the Headmasters and Targetmasters of 1987, so the boxes do not have an extra window or graphics for a partner, but they do have the digital sunburst grid pattern box, commonly seen in the immediately post movie era. They also had no real representation in the season 4 “Rebirth” cartoon, or the comics to any appreciable degree. I think IDW’s Maximum Dinobots allowed Furman, Roche and Raiz to finally give them some spotlight. Their tech specs allude to the fact that they are unreliable and uncontrollable Autobots, and in the case of Repugnus, have been kicked out more than once. They are, however, portrayed as deadly and capable. 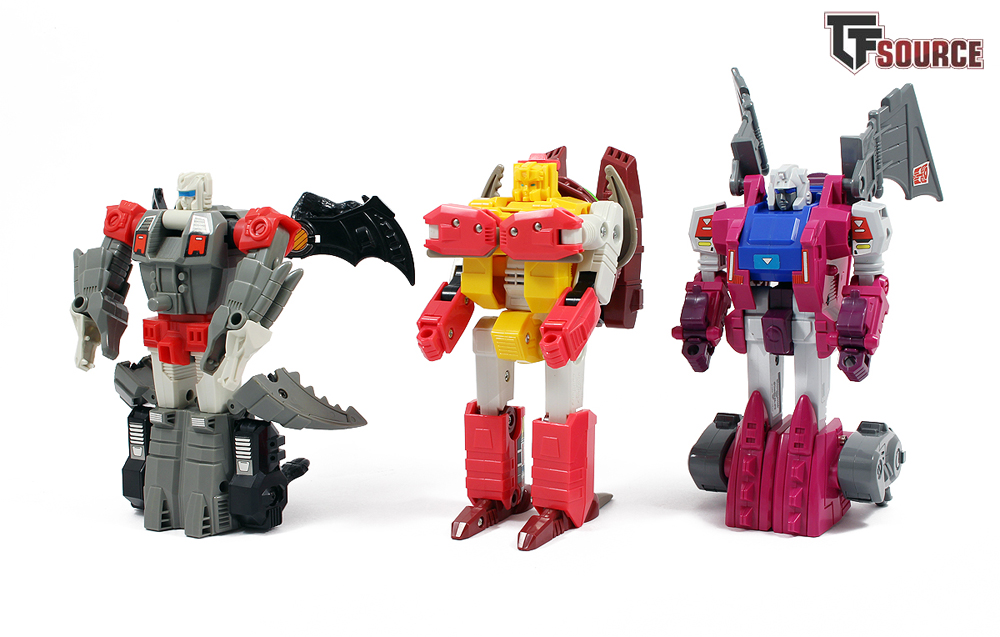 One gimmick the Monsterbots did introduce to Transformers was the use of the cold spark feature using a bit of flint and a wheel, activated by a button on the figures. You can read more on the history of this kind of addition to 1980s toys here. Sparks would fly from the figures in beast mode when the button was repeatedly pressed. I was lucky in that all the Monsterbot specimens I was able to find were in good working order with functioning spark mechanism. For a sub-group so dismissed by me as below my level of interest in Transformers, I’ve found these figures fascinating, and it was all triggered by the handling of a MIB unused Grotusque that a friend brought to a pub meet. I was already knee deep in post movie G1 appreciation articles, but that put the Monsterbots firmly on my wants list. Other than a faulty sparking mechanism, the main wear issue or loss of value on these figures seems to stem from yellowing of white, grey or cream plastic, sticker deterioration and missing accessories. 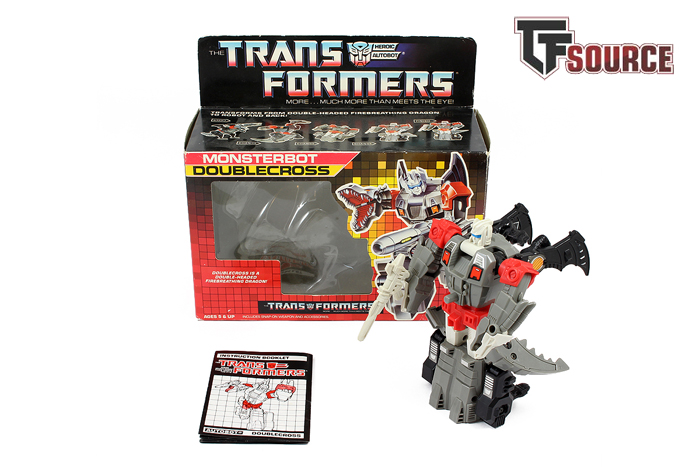 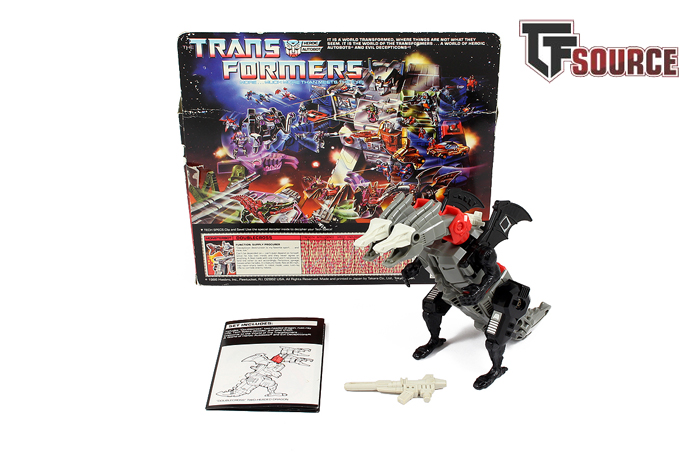 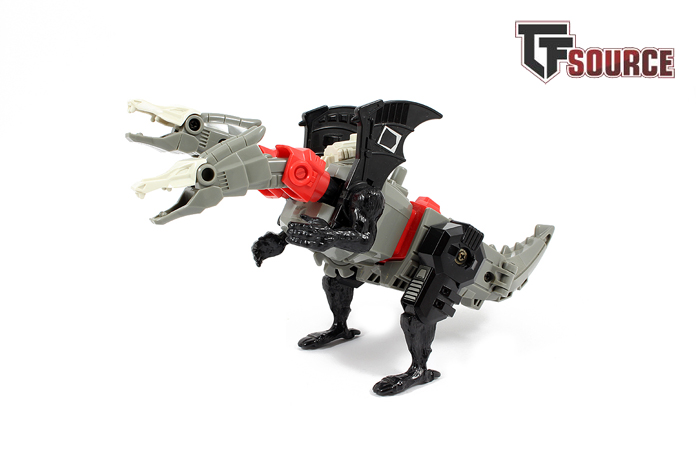 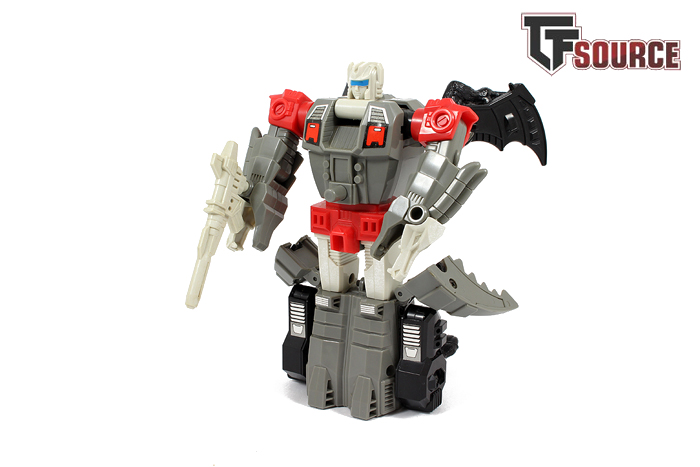 Doublecross, the two-headed fire-breathing dragon, seems to be something of a collectors’ favourite. This is a discovery I’ve made after paying more attention to how G1 collectors feel about Monsterbots. I’ve found it really hard to find one with perfect stickers (or even all of them) and complete for a decent price, so I ended up paying way too much for this one due to the box and inserts – then it ended up coming with a 1987 Cerebros gun instead of Doublecross’s one. This is partially understandable because Doublecross’s instructions do not show him with the right handgun that he actually came packaged with in 1987!

This figure is highly distinctive, having the two dragon heads as his hands and organic-style beast limbs instead of the more techno-organic limbs of the Decepticon Headmasters. There are ratchets everywhere and while the robot head does not fully conceal, it never adversely affects the beast mode. There’s a lot of articulation in those beast heads too (neck and jaw) for G1, and while they’re highly novel as heads & hands, he never quite looks as though he’s holding his gun! Doublecross was available in Canada distributed by Hasbro Canada, in Japan as C-100 from Takara and also from GiG in Italy. Doublecross’s boxart is fantastic, really bringing his distinguishing features – dragon heads and a beautiful robot head sculpt – into focus. 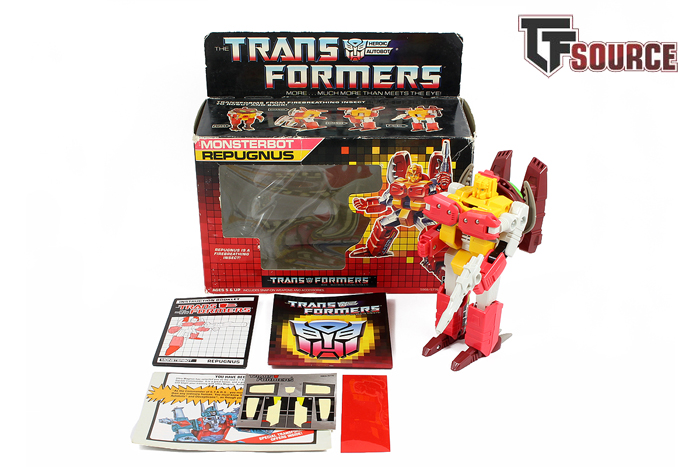 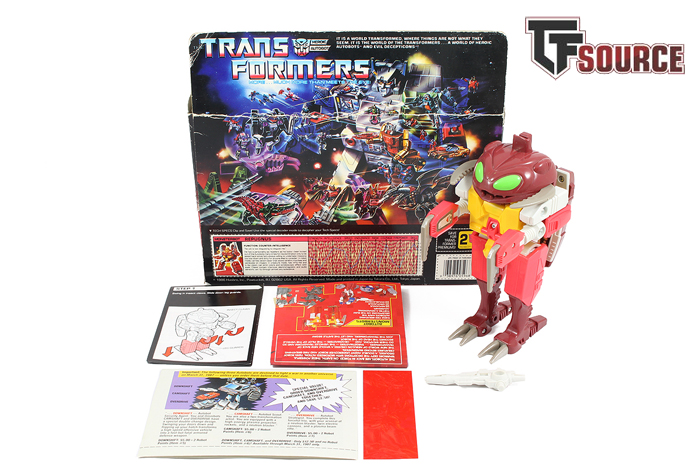 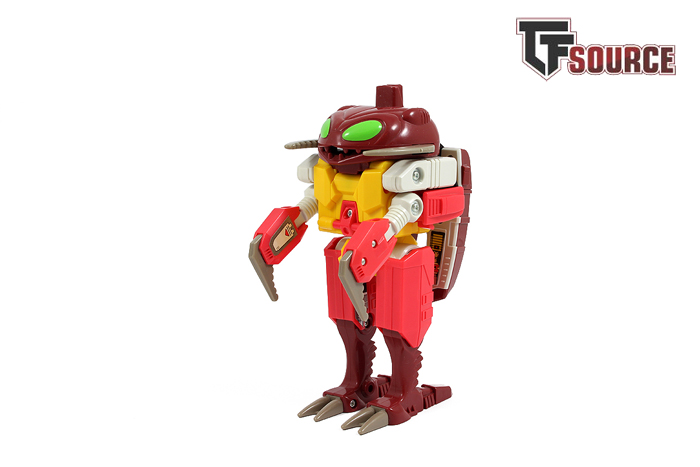 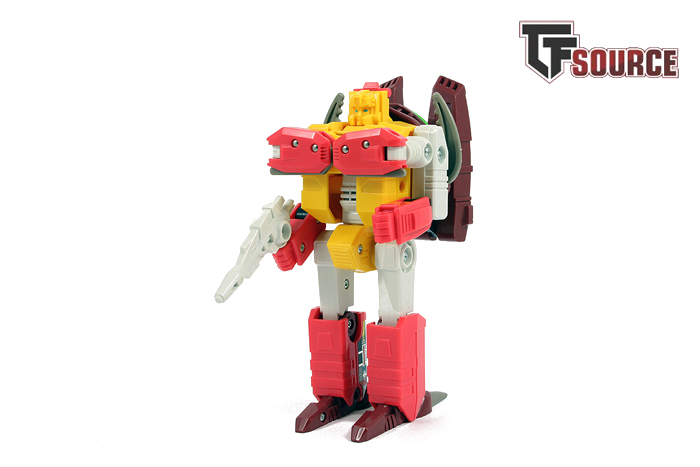 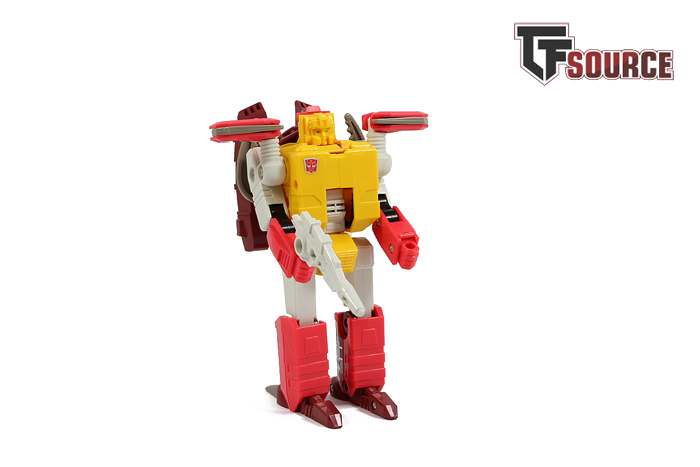 Goodness me, what a thing this is. I expected to dislike Repugnus as the weakest link of the three – even his techspec talks about how hideous he is – and the alt mode of a standing frog (or “fire-breathing insect” as his box calls him) wasn’t filling me with much anticipation. Now, I don’t know whether it is the strength of the mould or the fact that I got a virtually perfect mint specimen, but this is a tremendous figure. The transformation is enjoyable and the solid quality feel of all the parts makes them a joy to manipulate. There appear to be two official (but probably unintended) configurations for his robot mode, one with the bug claws as his breasts as per the boxart, or as wings like the stock photography. 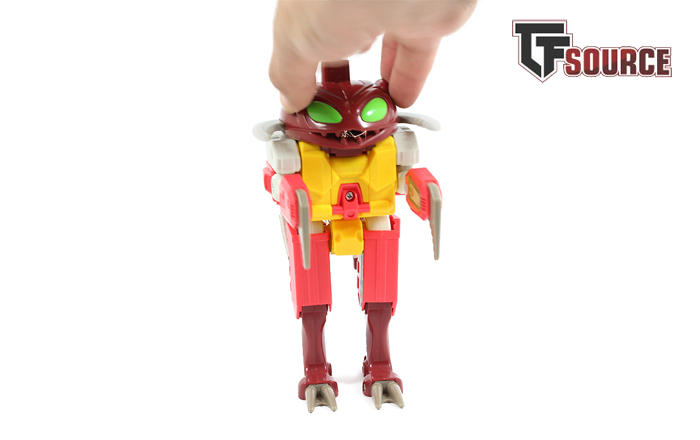 Interestingly, Repugnus’s instructions show him holding Doublecross’s gun, so a clear case of confusion permeating through a significant degree of the Monsterbot paperwork and stock photography. The sparking trigger is on top of the bug head, a bizarre cuboid block on top of a giant bizarre bug head, but at least the mandible-type things move when you press the trigger! This is one of the strangest G1 Transformers I’ve ever owned, but there is something charming about the way he transforms and how it ‘feels’ that I don’t get from modern Transformers. I’m sure a lot of that is the novel appearance and appeal of such a figure from 1987 and what good condition it’s in, but the monochromatic chest and robot head, with that gigantic inexplicably-shaped backpack make Repugnus every bit as quality as the other Monsterbots. The transformation is more interesting than appearance suggests too. Repugnus was actually not released at retail in Japan, C-99 “Repug” being something I have never actually seen. Turns out it was available as a mail-away, but in Hasbro packaging. 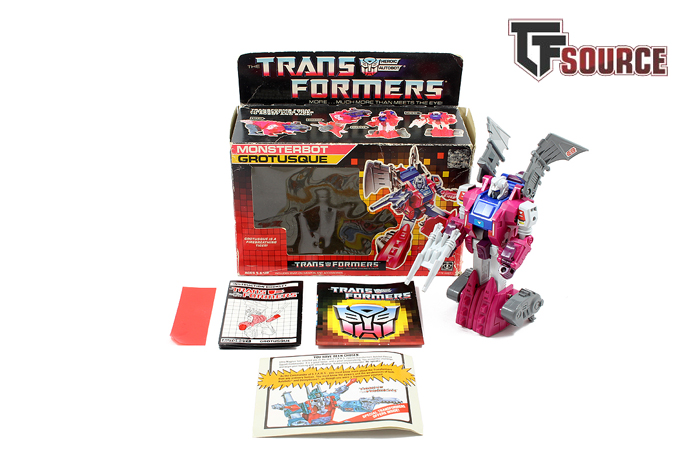 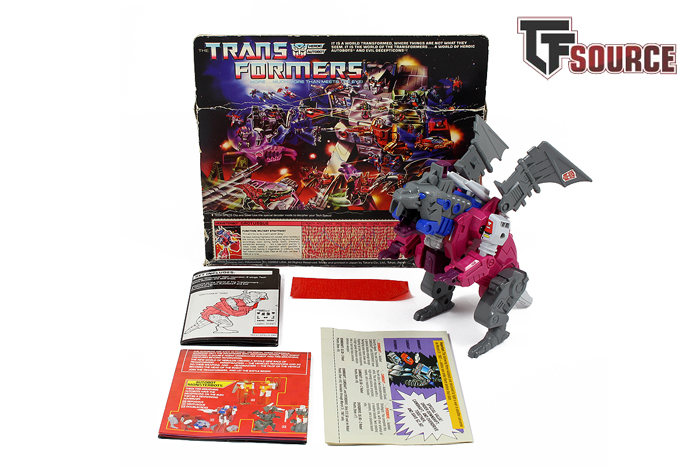 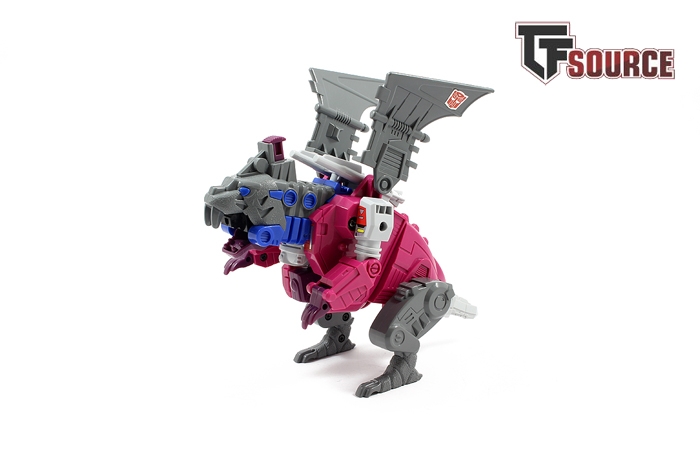 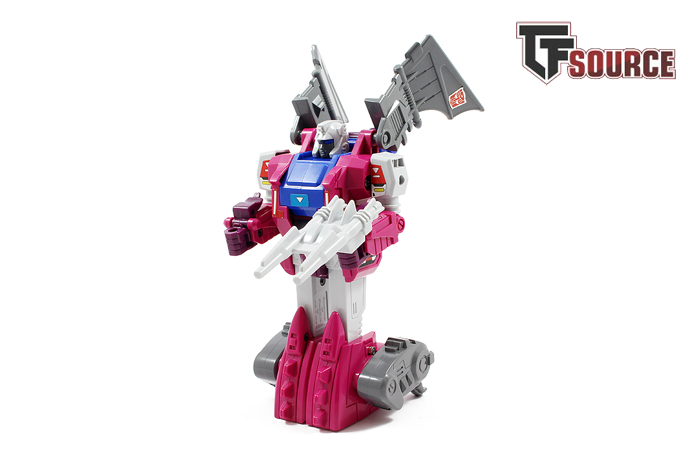 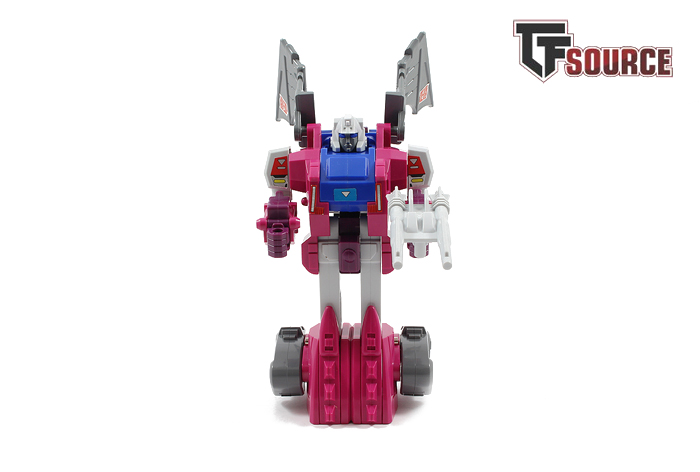 Finally, Grotusque. What a misleading name, this is one of the most spellbinding G1 Transformers I have ever owned. Sure, the “Flying tiger monster” beast mode is deliberately gross but how about those colours! A very involved and genuinely excellent transformation later and you have a majestic, perfect G1 robot mode. It’s part Dinobot, part Headmaster, part pre-transformer! Like Doublecross, Grotusque has wings but they’re removable, and they make him look like Venger from Dungeons & Dragons (voiced by Peter Cullen!). Unlike the other two Monsterbots, Grotusque’s weapon has a specific monster mode connection point which nicely helps in closing up a gaping hole in the mould. And not to short-change the beast mode, it is every ounce of horrible you’d want from something called a Monsterbot, and it can be posed standing on its hind legs or on all fours.

The sparking feature shoots “fire” out of a droopy jaw, which I must admit had me worried about the condition of my Grotusque specimen, but it seems to be part of the design. The beast legs are equally as organic as those on Doublecross, and although they don’t ratchet away as satisfyingly, and the robot head just partway hides itself in alt mode, the charm of this figure is irresistible. The robot head sculpt is decidedly surly, but what a beautiful sculpt it is. Without a doubt, Grotusque is the best of the bunch for me, and very high on the list of best figure of 1987. The fact that it had remained invisible to me for so many decades just adds to how much I love it. What a success. This success was also available in Japan as C-98 “Grotus”. 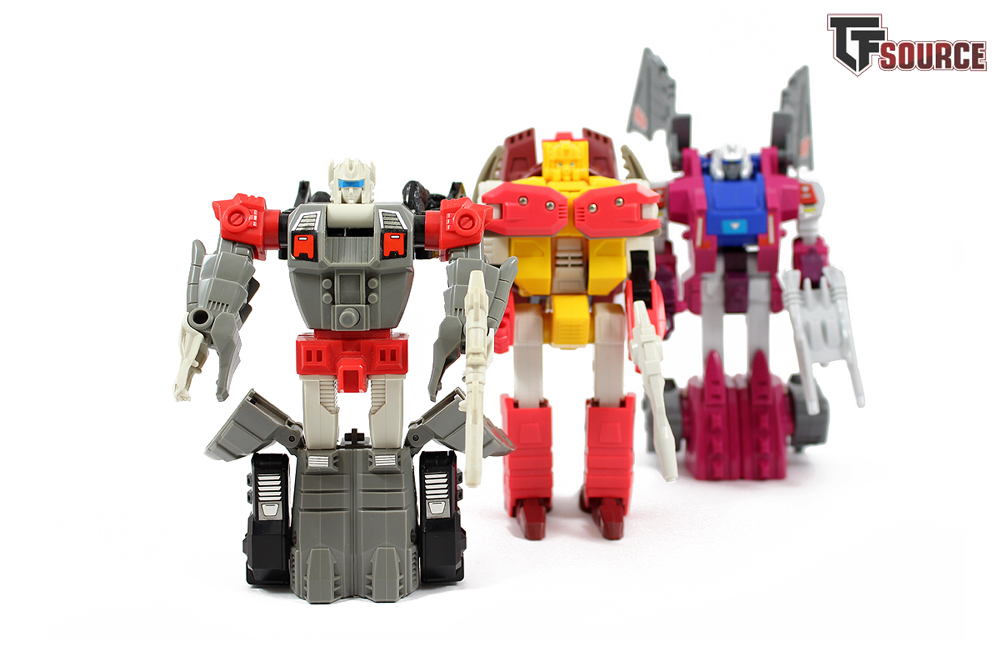 As strong and distinct as each Monsterbot is, with nothing beyond a sparking feature and repugnant looks in common, they make a hell of a team. The twin dragons of Doublecross, the massive bug head of Repugnus and the regal wings of Grotusque mark out the beastly Monsterbots as a truly unique bunch of characters and toys. They have the very specific post-1986 Transformers look, but none of that futuristic styling of the Headmasters. They are sturdy and have great transformations, the enjoyment of which is massively augmented by having mint specimens, admittedly. Because their heads or weapons do not need to become a robot, the designers have had the freedom to craft stunning head sculpts and truly distinctive features into these figures. Unlike the Autobot Targetmasters and some of the Headmasters from 1987, the Monsterbots have painted blue eyes among other details. They are such good Transformers as is, but I suppose the spark feature gave them just that extra bit of novelty at the time. I would say they are one of the groups of Transformers that would be amazing to see in a modern-day guise, official or otherwise, but why mess with perfection? Despite a lack of obvious Nebulan gimmick on the boxes, a lack of proper cartoon or comic representation on release, the Monsterbots seem to be well-loved by most vintage collectors I speak to. They are one more pocket of releases that cement 1987’s place as a truly vintage year. 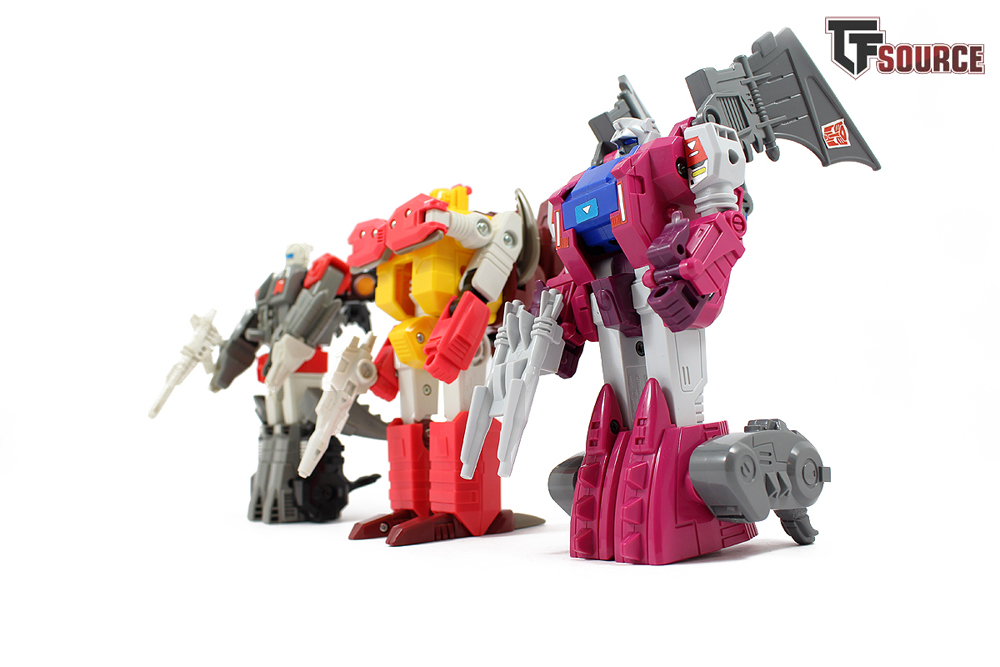