Without any sort of hesitation or doubt, I can gladly cite 2015 as the year with the most impressive official and unofficial Transformers releases that I have ever experienced. In previous years for my Top 5 of the year article, I have not just included purchases of toys released in that year, but also vintage figures that I may have purchased, but I just cannot afford to do that this year if I want to stick to any semblance of a top 5. TakaraTomy, Hasbro, FansToys, MakeToys, MMC, BadCube, DX9, Unique Toys and co have put out a quite unbelievable range of figures in 2015.

In many ways I’ve actually cheated with the above image and squeezed in what amounts to my top 10 (if you don’t count the smokey one who cannot be mentioned), but when figures like FansToys Tesla and Grenadier, TakaraTomy Masterpiece Bluestreak and Skywarp, MakeToys Dystopia, MMC Cynicus, Anarchus and Spartan, DX9 Carry, Chigurh and UT Provider and so on do not even make my top 10 list, you can tell this has been a very special and unforgettable year for new toys. And MP-26 Road Rage as well as BadCube Sunsurge are too new to rate, released within the last week! As with previous years, I must re-iterate the disclaimer that this is PURELY about my own tastes and an evaluation of the top purchases I made this year, not every toy that was released. I bought no Combiner Wars toys, I bought no TFC, no Warbotron, no Iron Factory, no Planet X, no FansProject etc, so I simply cannot pass judgement on them. This article and top 5 is about my personal purchases in 2015 and my opinions therein. 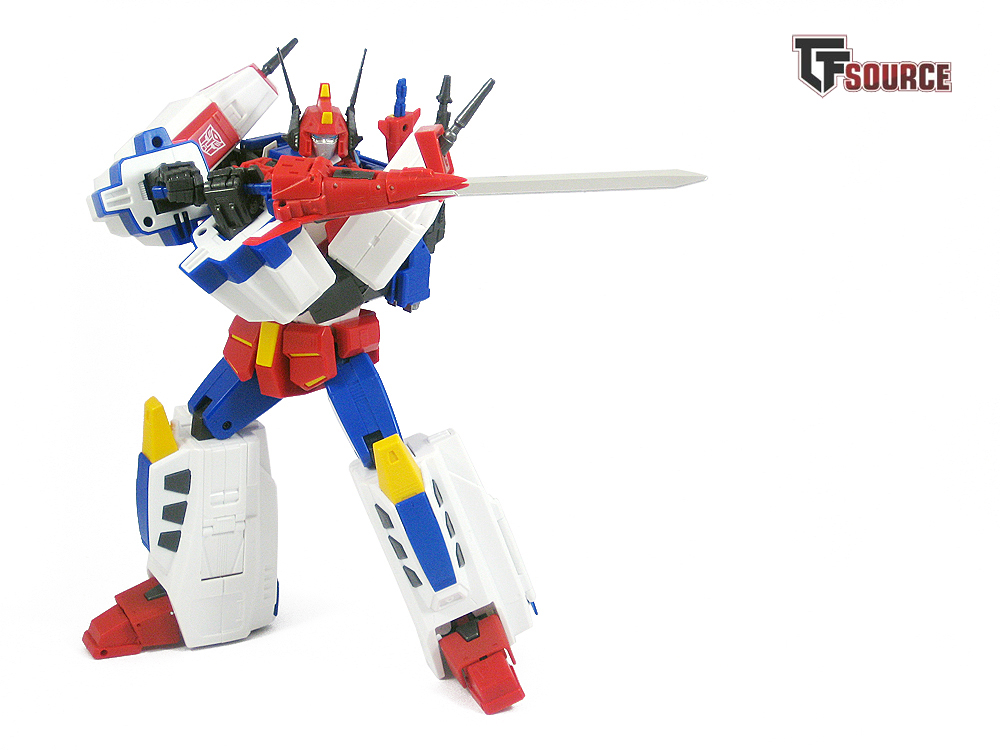 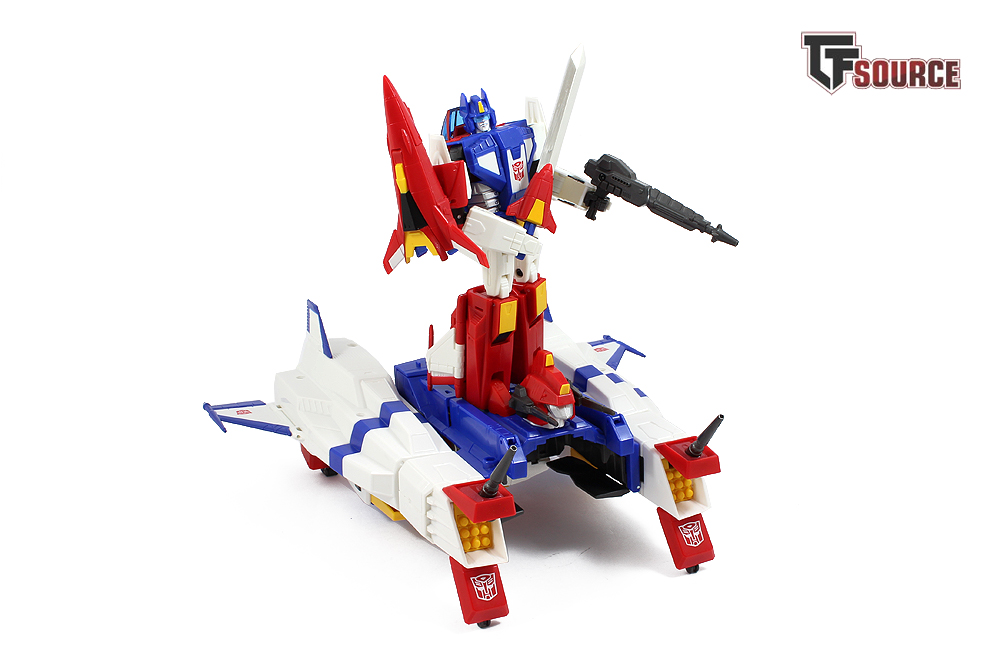 I didn’t even pre-order this as I expected to skip it, but when TF Yuki continued to pepper Twitter with teaser pic after teaser pic of the glorious fan-poll winning MP-24 Masterpiece Star Saber, the die was cast. I do love the toys from Transformers Victory, but in terms of what appeals to me more, MakeToys Gundog, Masterpiece Tracks, FansToys Soar and Sever could have been more up my street and should have had a greater effect on me. Credit to Star Saber and TakaraTomy for making sure that did not happen. 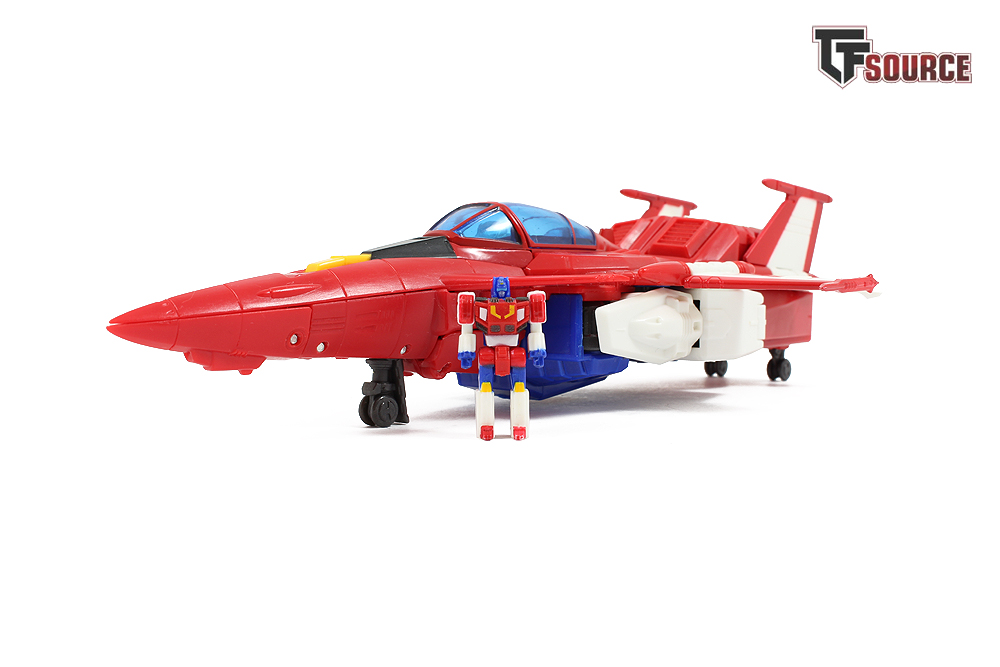 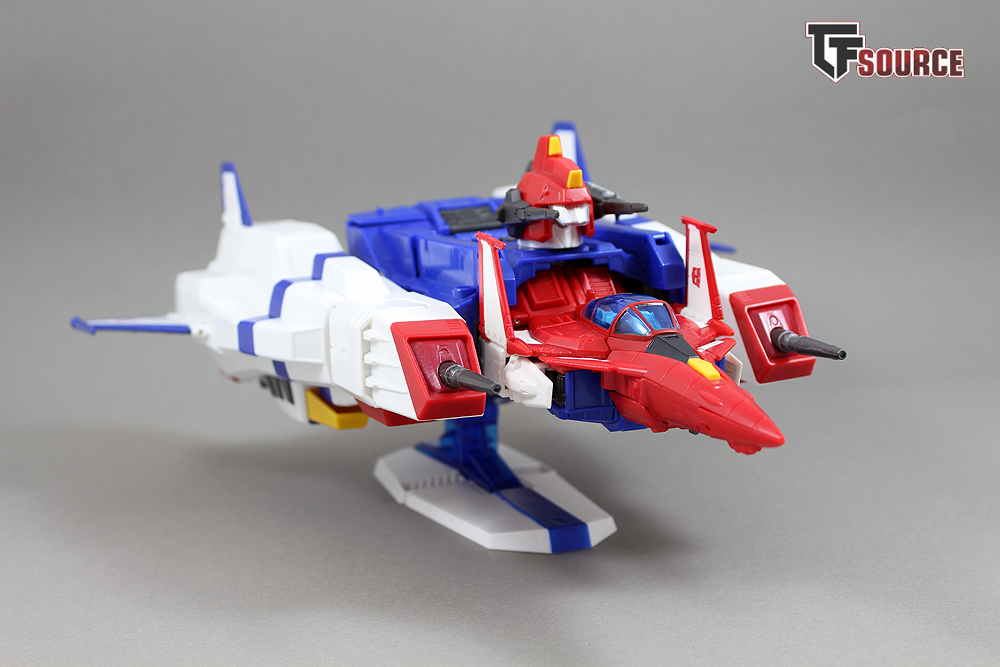 As it was, Star Saber blew me away. The size and feel of the figure were amazing. The sheer play value of having multiple modes and quality robots – not to mention the gloriously painted microscopic Brain of Courage – as well as a ton of accessories and configurations – mean that MP-24 felt like the proper luxury product a Masterpiece once was and ought to be. The lovely combining of parts to create different looks, the exceptionally playable Saber figure within, the mad fully combined alternate mode, there was a lot to enjoy. It was also a tremendous love letter to the original toy and the animation model, so it was a job phenomenally well done. The reason he isn’t higher on the list is due to a lack of proper weapon grip on the large sword and some lack of articulation in the lower half. The way he looks though, I can, and have, stared at him for hours. I couldn’t be more grateful that the Masterpiece line took this deviation from the expected release roster. More of this, please! 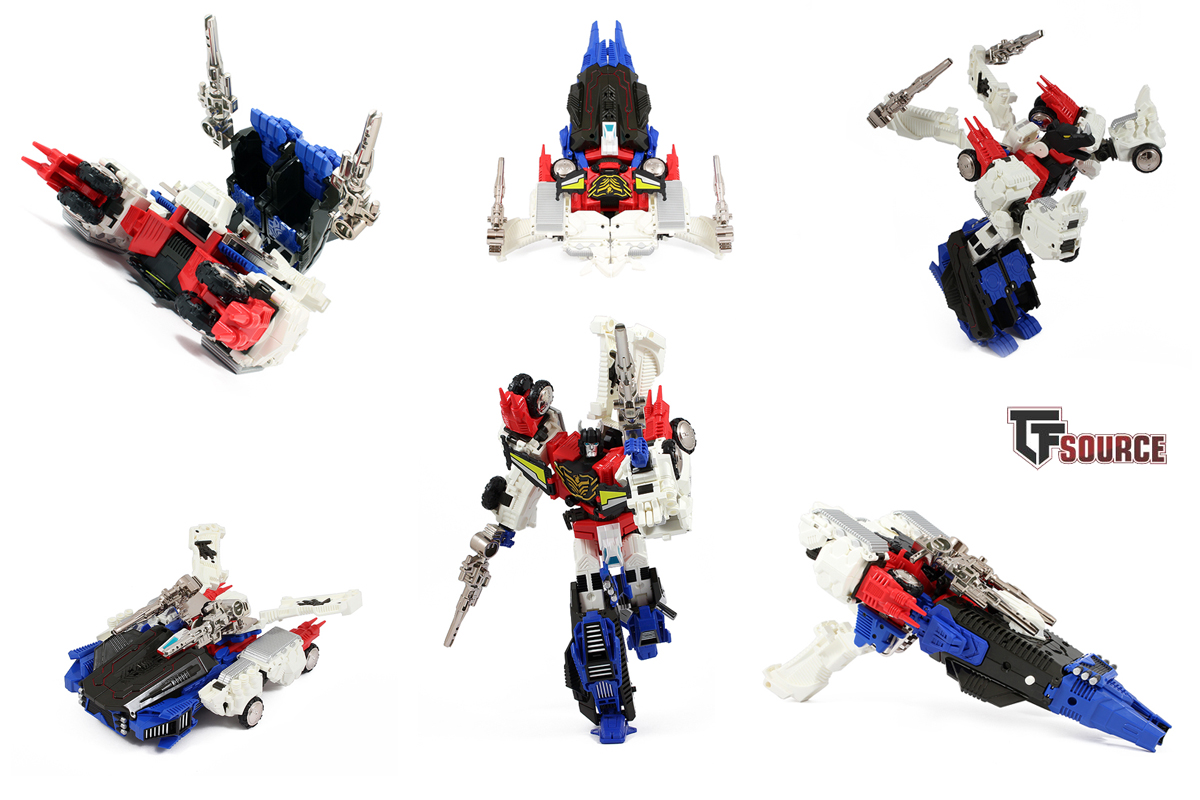 More Transformers Victory – sort of! I waited what felt like a lifetime to add the vintage version of this toy to my collection at the start of 2015, and finally MMC got around to producing and releasing Grandus Hexatron, the heroic repaint of Terminus Hexatron. I’d been excited for this since 2013 and had expected to see it in 2014, so it is no surprise to find Grandus Hex on my list for 2015. This is a combination of just how stellar a job they did with the repaint and remould, as well as my first experience of the Hexatron mould at the start of 2015 with Terminus Continuum. 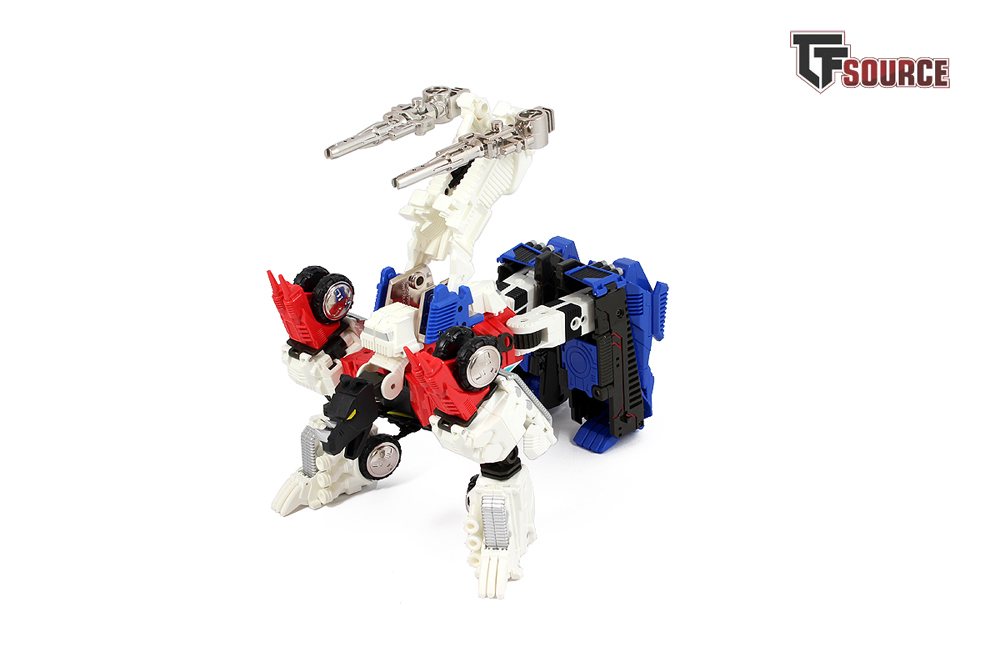 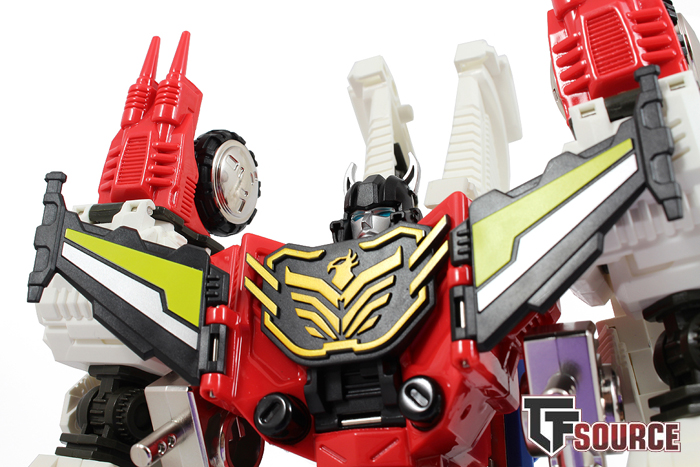 MMC not only captured the exact right feel for a six-changing toy (non-complicated transformation, pick up and play value, reasonably convincing modes), but they included every drop of appeal from the vintage version of the figure within Grandus Hexatron. The phoenix on the chest, the colours and moulding, the beautiful head sculpt and the majesty, it’s all there. The Hexatron base mould is a tremendous thing anyway, superb posability and durability, incredible proportions and quality. Grandus Hexatron has quite an arsenal on board, too. The added chrome, painted glossy surfaces and cleavers make Grandus Hexatron stand above the regular Terminus Hexatron, and level with the Continuum re-release, even if the original great swords and shurikens are gone. Drawbacks include a head that’s a tad too small and some fit issues with the jet nosecone halves due to an added layer of paint (same with Terminus Continuum), but the packaging is gorgeous and so is the figure. Stand him next to the vintage figure and they just sing in perfect harmony. A dream come true. 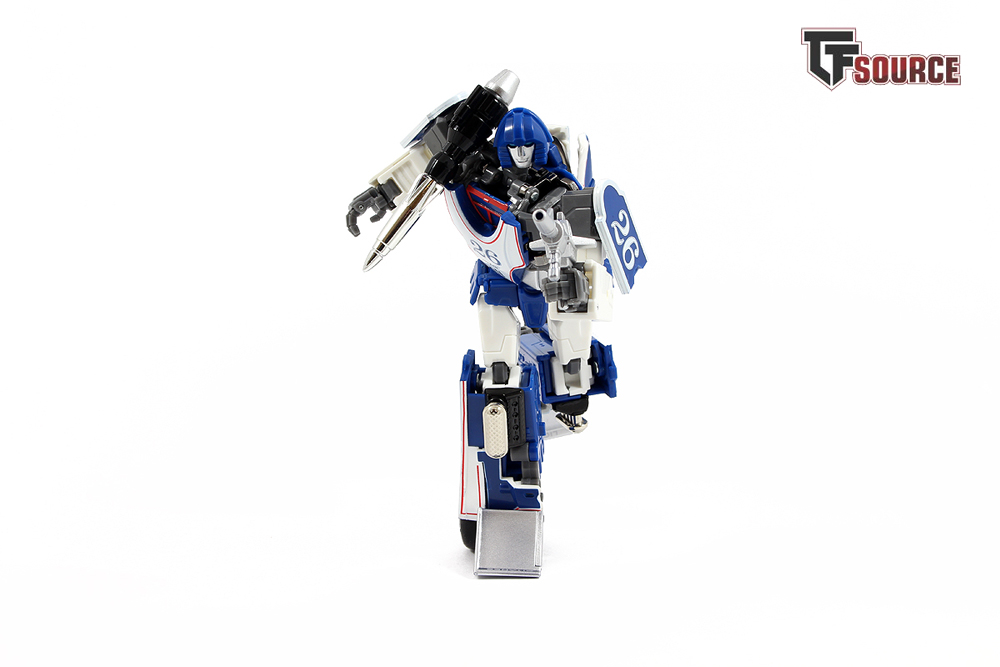 Ocular Max (read: MMC) set out to improve upon the Masterpiece style figures we were receiving and fill gaps in the official line-up. They started with a character that could not be closer to my heart, so my expectations were stratospheric, especially as DX9 had produced the very good “Invisible” not a year earlier. With rumblings of an official representation on the horizon, Sphinx really needed to be good. And, my God, was it good. There does not exist a toy with a more delicious alternate mode than Sphinx and his original inspiration, something that Ocular Max emphatically nailed. The robot mode was a perfect fit for the desired niche in terms of aesthetic and scale, and although a lot of people didn’t like the head sculpt, I found it perfect and reminiscent of everything I love about this character. 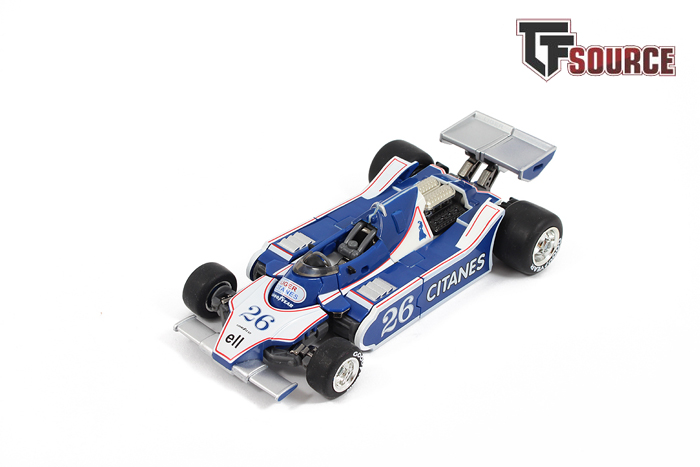 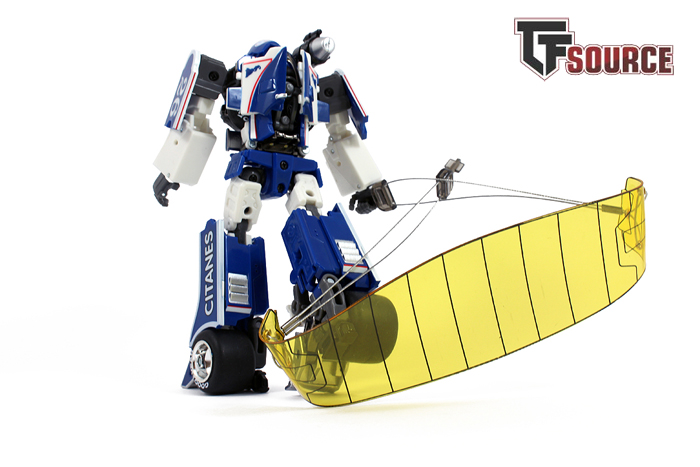 Add to the above an array of cool and relevant accessories (although the replacement heads were of questionable quality and the shoulder launcher attachment was pants) like that signature parachute, a simply FANTASTIC transformation that beats out almost every other figure of the year, smartly used die cast, rubber tyres, spot-on accurate paint and marginally (but noticeably) mis-spelled sponsor logos and you have yet another dream realised for my collection in 2015. It’s a crying shame that a number of collectors got dud versions with sagging wheels and a few bad spots, but all I can say on that is that my specimen is perfect and many have been. If this is what Ocular Max are offering going forward, I will not be able to contain my excitement. Did I ever mention that I love Formula 1 and that this character saved the universe?

This could easily have been #1, but 2015 contained two enormous surprises for me, figures I would never have imagined putting above the likes of Sphinx, Grandus Hexatron, MP Tracks, FT Soar and Sever. 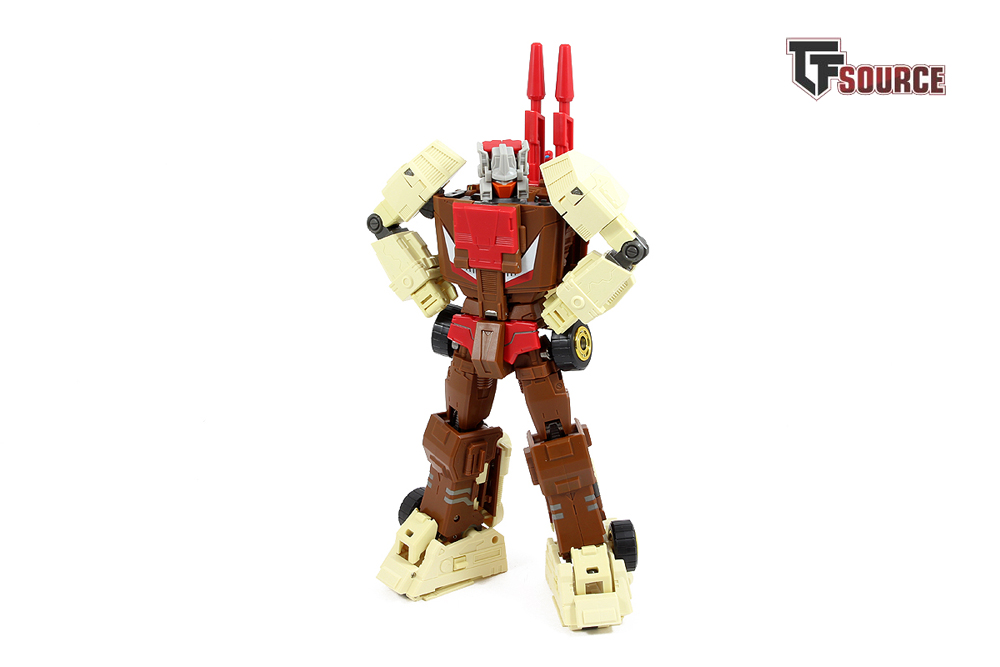 I will never forget my reaction to seeing MakeToys Re:Master “Cupola” in the flesh for the first time. Neither will those around me, I was basically lost to them for the remainder of the night and became obsessed and enthralled by this delightful creation. The original toy and character upon which Cupola is based never interested me. His appearance in modern comics helps, but it was the teaser images from MT pre-release that made me think this could easily be the best incarnation of the character, but other releases in the Re:Master range interested me more. Cupola’s size is what got me first, then the weight, then the absolutely perfect looks and presentation, followed by the superb quality and feel of the figure. The final touch was the wicked “Headwarrior” and the dynamic proportions of the combined creation. 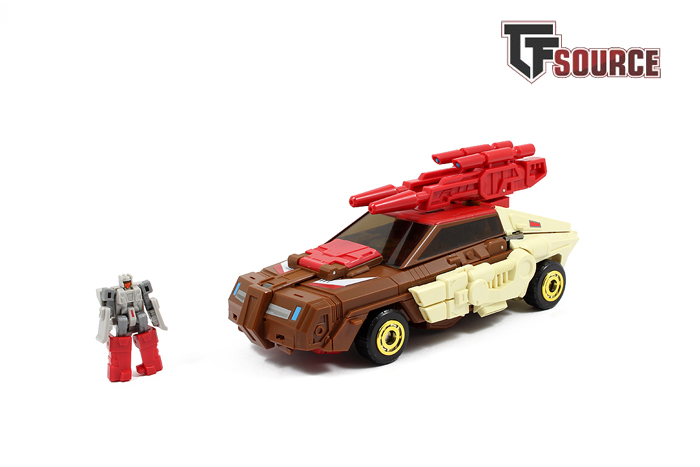 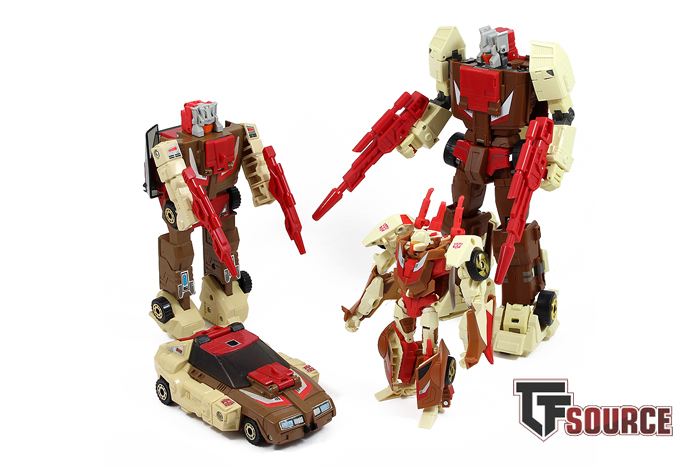 Based heavily on the toy but with heroic dimensions and added (but in some places limited) posability, Cupola is pretty much the pinnacle of 3rd party releases for me thus far. I love how complex yet accessible the transformation is, I love how perfect the weapon grip is. I love how everything seems soaked in adoration for the source material and how a character and toy that never registered with me could suddenly capture my heart so vigorously. I recall clearly being gradually worn down and enabled by others online, eventually capitulating on first actual handling of the figure. I was already introduced to the brilliance of MakeToys through Utopia this year, but Cupola still impressed me deeply. One reason he doesn’t make #1 on the list is the popping off of the wheel and pin on the waist, a widespread issue that my own first specimen suffered from. The associated limitation in posability at the waist was also a factor. Very few things draw my eye now like MTRM-01 Cupola, what a surprise and what a success. 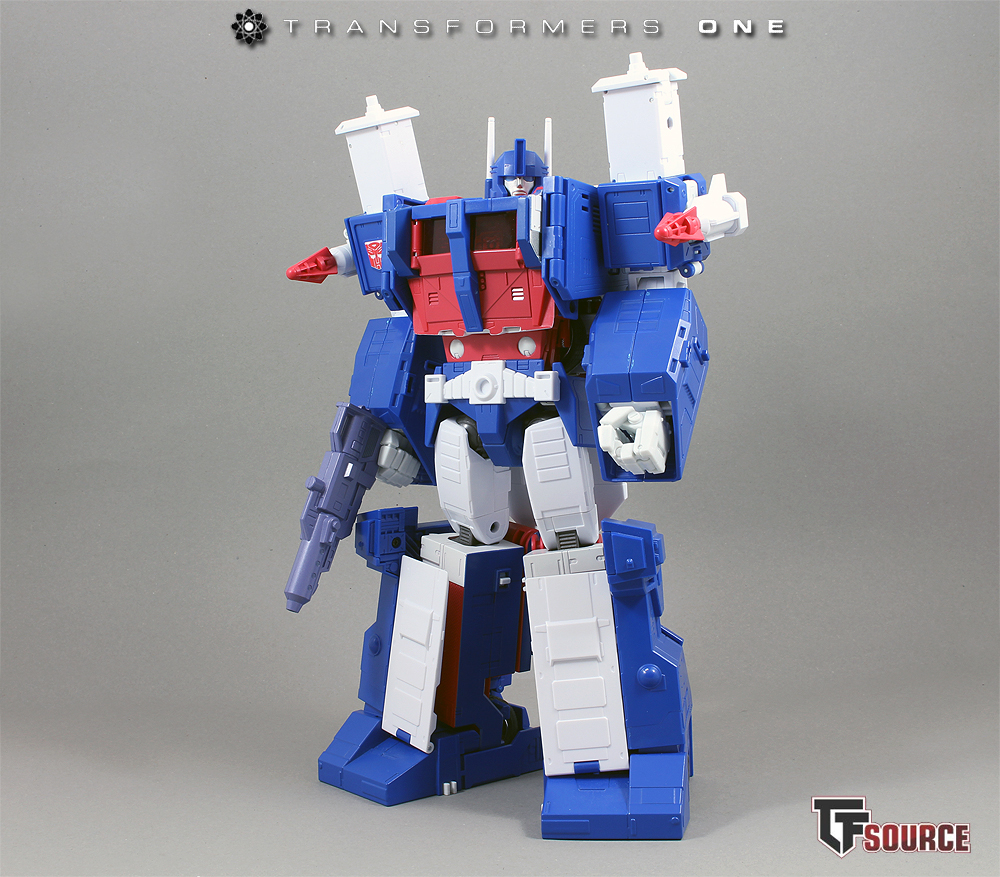 Here we are, not just the best Transformers purchase of 2015, but I would controversially say better than the best of 2014, 2013, 2012 and much before. Masterpiece Ultra Magnus is one of the best transforming toys I have ever seen, held, transformed and played with in my life. I’m not a Magnus fan, I didn’t even pre-order this thing. Who could forget Buttflapgate? Who didn’t whine about no proper white transforming MP-10 cab? Many questioned the slightly worrying looking prototype images and the red in-your-face screen accurate front bumper. So how did it end up at #1 on my list? 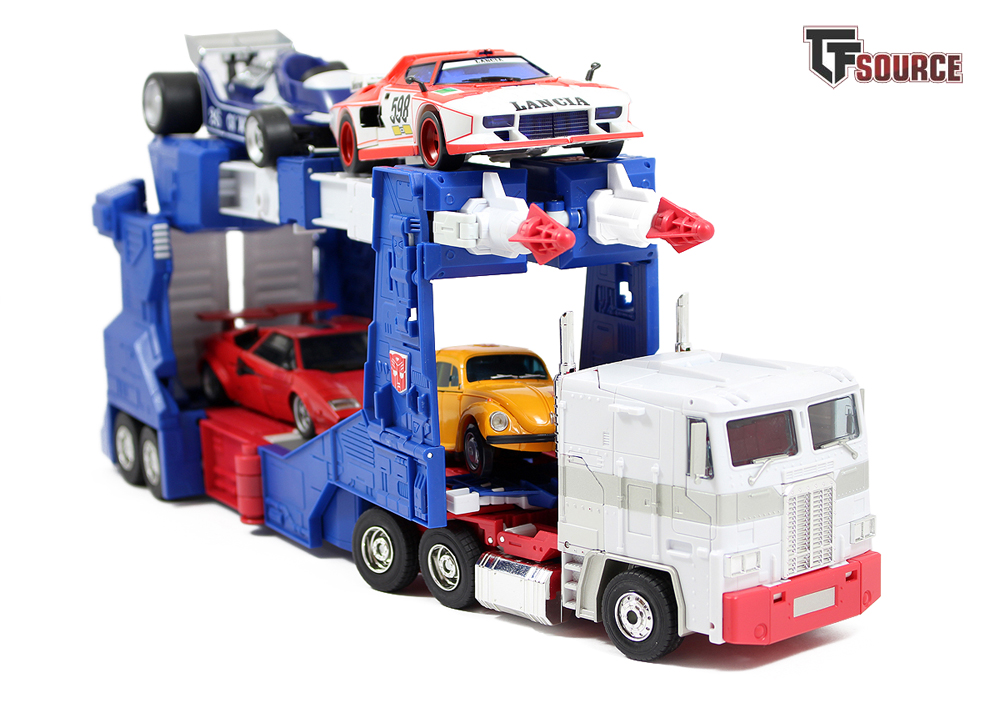 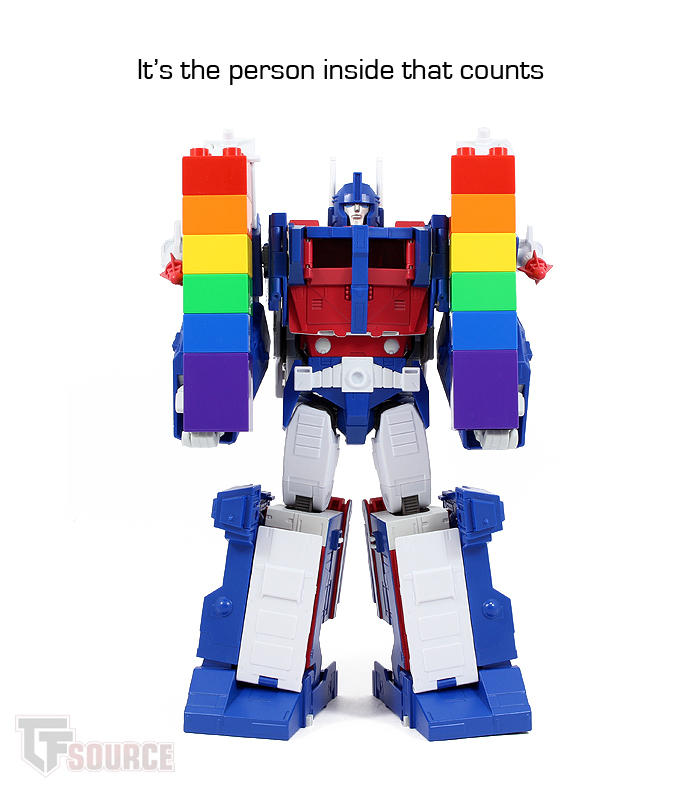 MP-22 Magnus got to #1 by having the best transformation sequence on a post-vintage Transformer. It took top spot by having the kind of presence that dominates a shelf, display and collection. The significant amount of die cast metal in the figure adds ridiculous heft, and he has far more screen accuracy than most give him credit for. I don’t even care that his posability is limited because once the figure is in my hands, I’m in another world. He contains steps in his transformation that are engineering genius, and for a figure to be this large, this complex, and still so attractive to pick up and transform the way deluxes, legends and some voyager toys are, is a remarkable achievement. The stunning transporter alt mode and its interactivity just puts the polish on a flagship Masterpiece release. MP-22 came out in the last moments of 2014 but most of us grabbed him at the very start of 2015, and nothing else released all year has come close. An instant classic and now a lifetime favourite, I’m sure. Well done to TakaraTomy for reminding the rest of the transforming toy-making companies in the world precisely how it’s done. 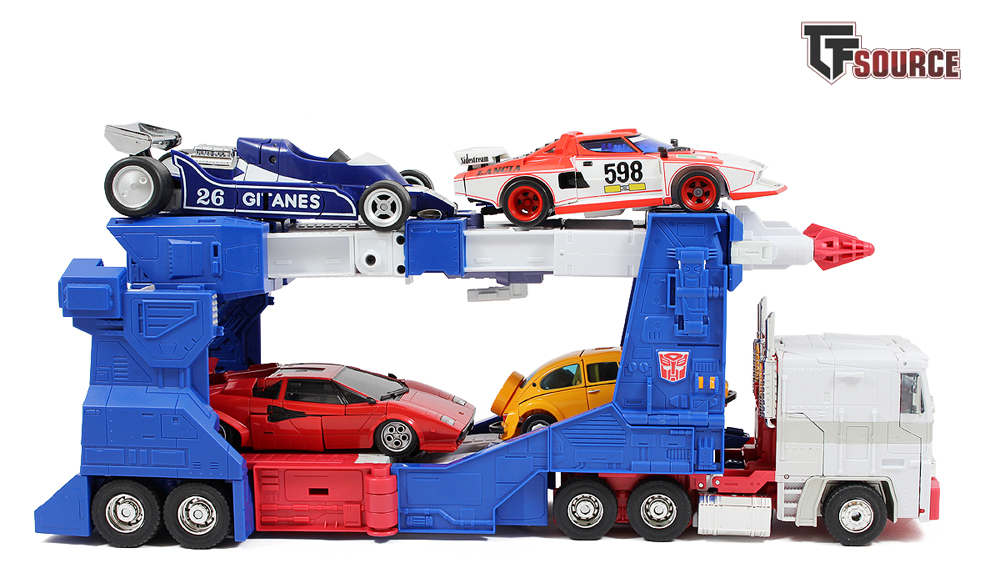 More than any other year, the toys I had to leave off the list caused me pain. Masterpiece MP-25 Tracks, MakeToys Gundog, FansToys Soar & Sever, Unique Toys Ordin, DX9 Carry, Takara Transformers Legends Jetfire even Robots In Disguise Legion Class Fixit brought me an immense amount of pleasure, excitement and thrills in the last 12 months. Any other year and most of those toys would have found themselves in the top 5 with ease, such has been the depth of quality seen in Transformers official and unofficial products in 2015. I think had I bought a Unite Warriors Devastator, or had MP-26 Road Rage or MP-11T Thundercracker been in hand by now (the former originally planned for November delayed to late December, the latter not yet delivered), the list may have looked different. The good thing is, no matter what path you went down with new purchases this year, there was quality, wonder and high standards to enjoy everywhere from the smallest Transformers to the titans. We have – genuinely – never had it so good. 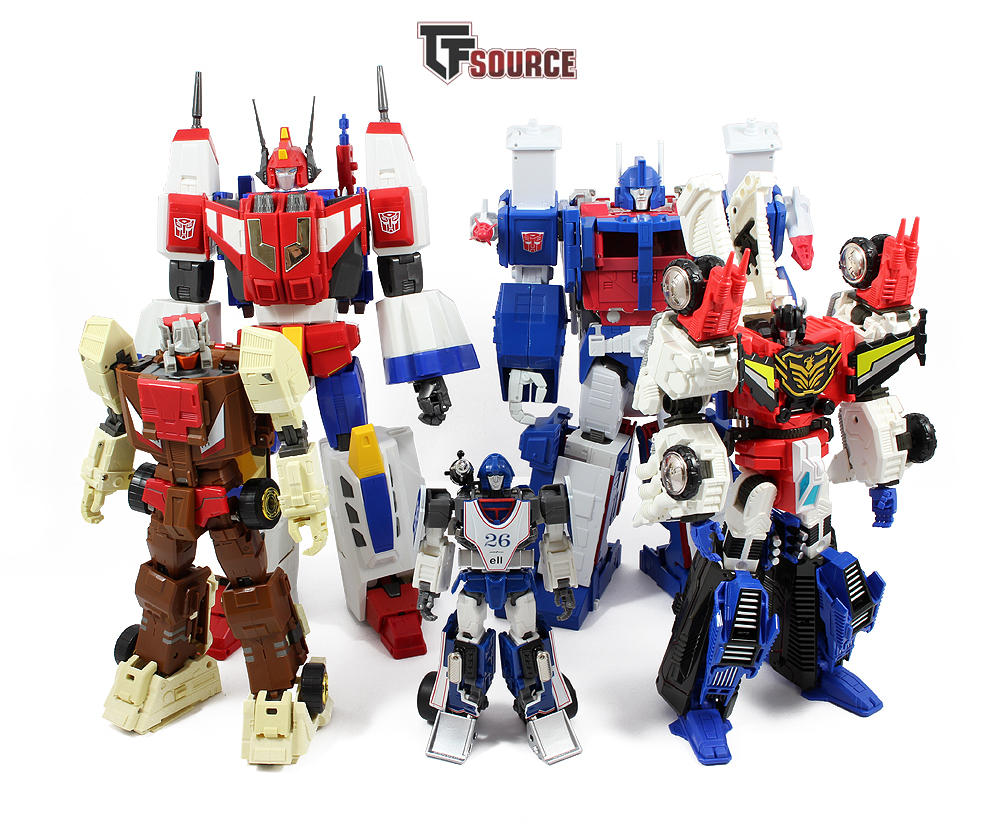