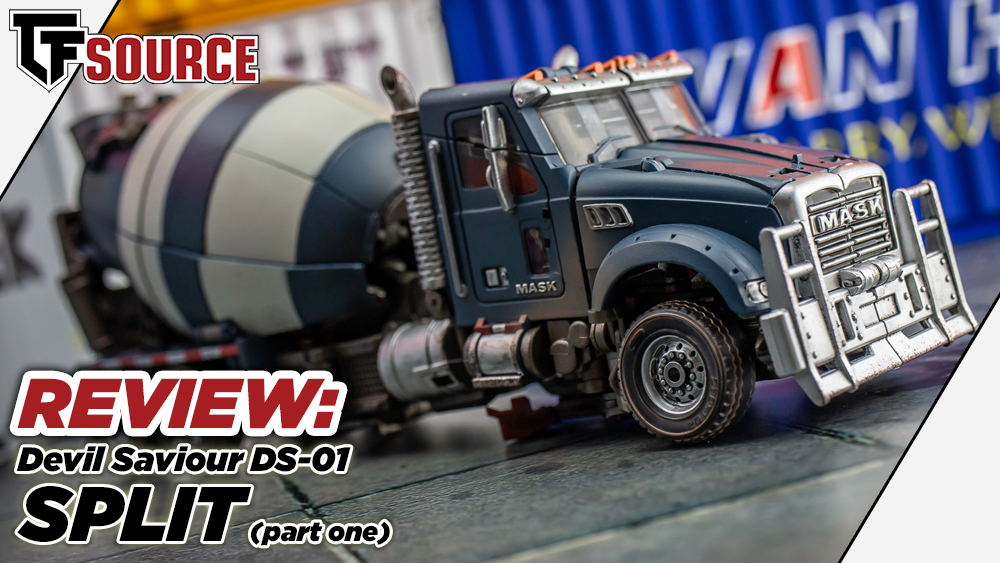 I can honestly say I’ve been relishing this one, foolishly or not. Ever since Devil Saviour Split first made it into people’s hands it’s only fair to say that opinions on him have been decidedly mixed (pun very much intended), so I was keen to have a crack myself and see what all the fuss was about. Is he a bold new frontier, taking us on the first step toward high-end third party Bay-combiner bliss, or he it the end of days, an unofficial toy so helplessly and hopelessly fiddly that it makes us want to rage-quit the entire hobby. Judging by what I’ve seen online whichever assessment I agree with it’s unlikely to be a split decision (OK I’ll stop now). 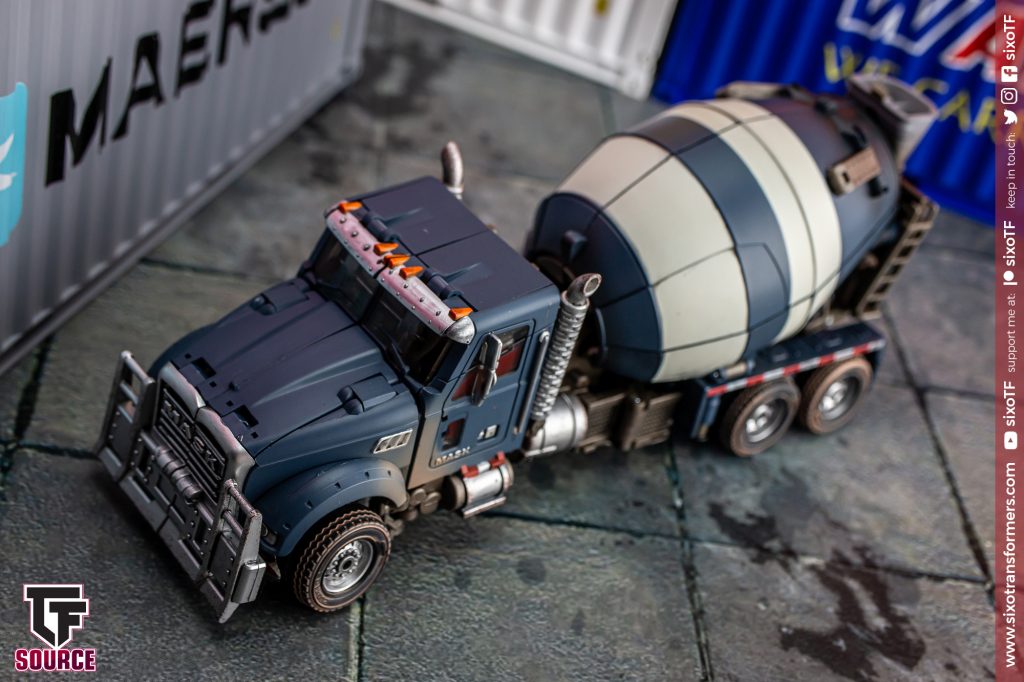 If you’ve already watched my unboxing video (which you really should do, like right now) then you’ll know that I had a bit of an awkward time with this toy right out of the packaging. In fact by the end of that experience I can’t say that I was entirely enamoured with him based on my first impressions, as the transformation seemed to be hugely awkward and the toy itself had a few issues that I uncovered as I went. Oh, and then of course there’s the fact that it broke on me, right on camera. So, yeah, not the best first impression. 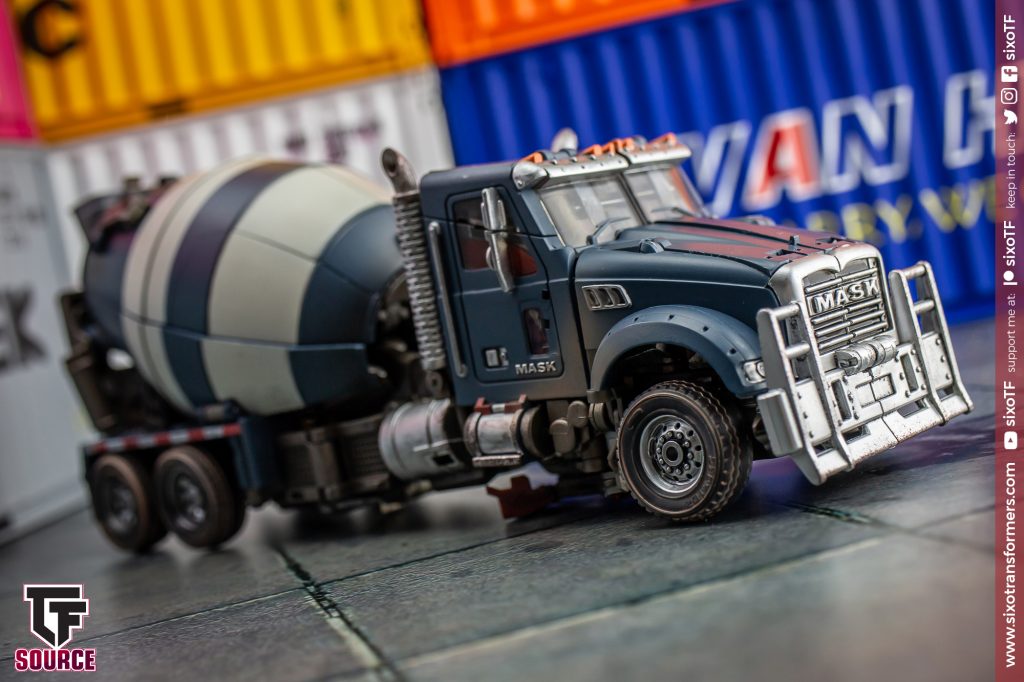 But hey, I can honestly say that like always I’ve done my very best to put those initial concerns to one side and give this figure a fair shake whilst putting this review together. Not every toy starts off as a winner, so maybe this was just one that I needed to spend a bit of time with and get to know, right? Well, let’s see! 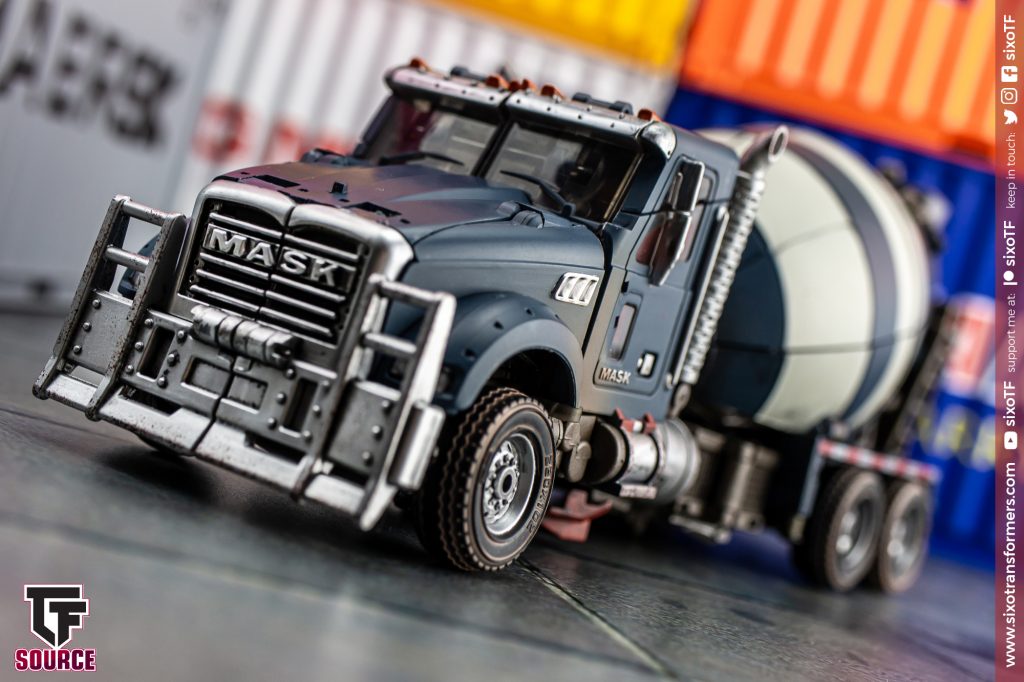 Split comes packaged in his robot mode although I’ve decided we’re gonna kick this off by taking a look at the vehicle form. Call me traditional if you want, but I just prefer things that way, and you know what? For as much as it was not fun getting this guy into this mode I can’t help but think that he shows a lot of promise here. A cursory view will show you what I mean, with some really nice moulded detail and attractive features that we’ll look at in just a moment. It’s a strong statement and has the potential for looking pretty fabulous. 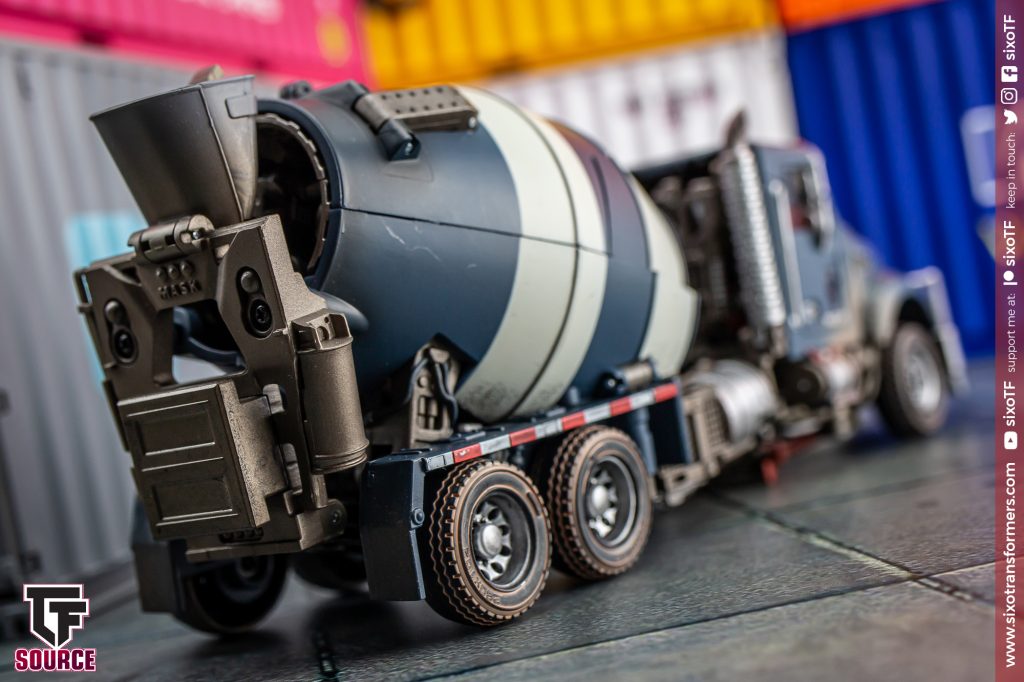 I say “has the potential to” quite pointedly as I’m afraid to report that despite my best efforts I’ve been unable to get this thing completely tabbed-in and flush. I have tried – oh, how I have tried – but it’s an exercise in frustration just to cram it together as best you can into vehicle mode, let alone have it looking perfect. It’s more obvious in-hand but a side view is perhaps the best demonstration I can provide here for how wonky certain parts of this are on my copy, with the main body refusing to sit straight and a couple of the wheels looking decidedly skew-whiff. 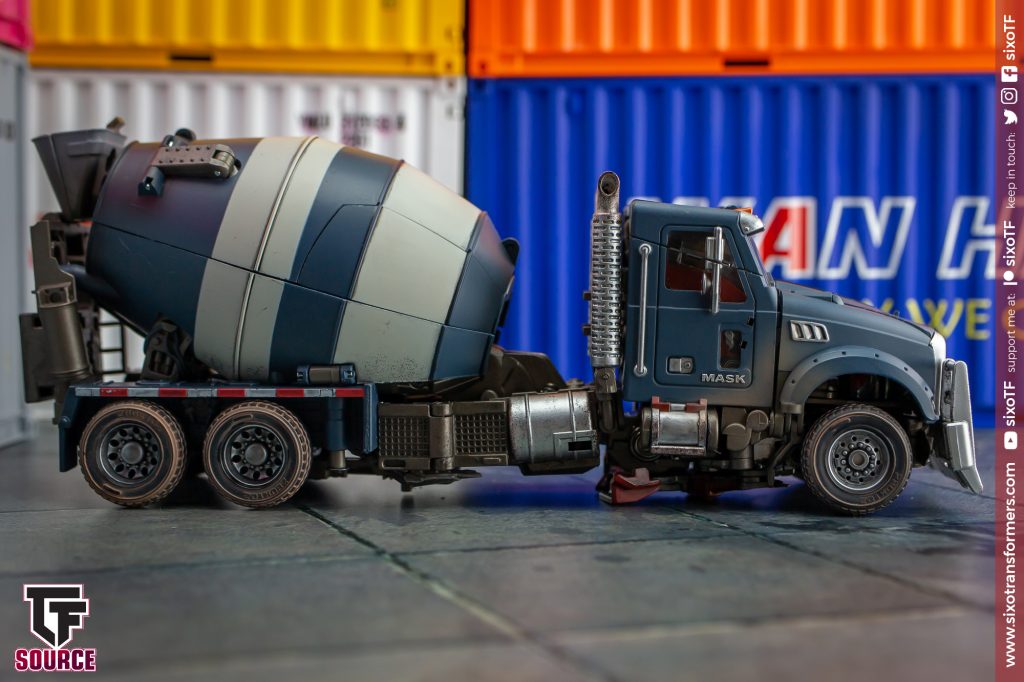 Perhaps the worst offender here is the truck cab, which seemingly *cannot* be configured to tab in altogether at once (or certainly not in any way that I’ve successfully managed). I mentioned this in my video but the experience of trying to assemble it reminds me very much of MPM Ironhide, where when you apply pressure to one part, another previously-tabbed part pops out again. And so on, and so on, until suddenly you’ve eaten your own fingers out of frustration. Ahem. 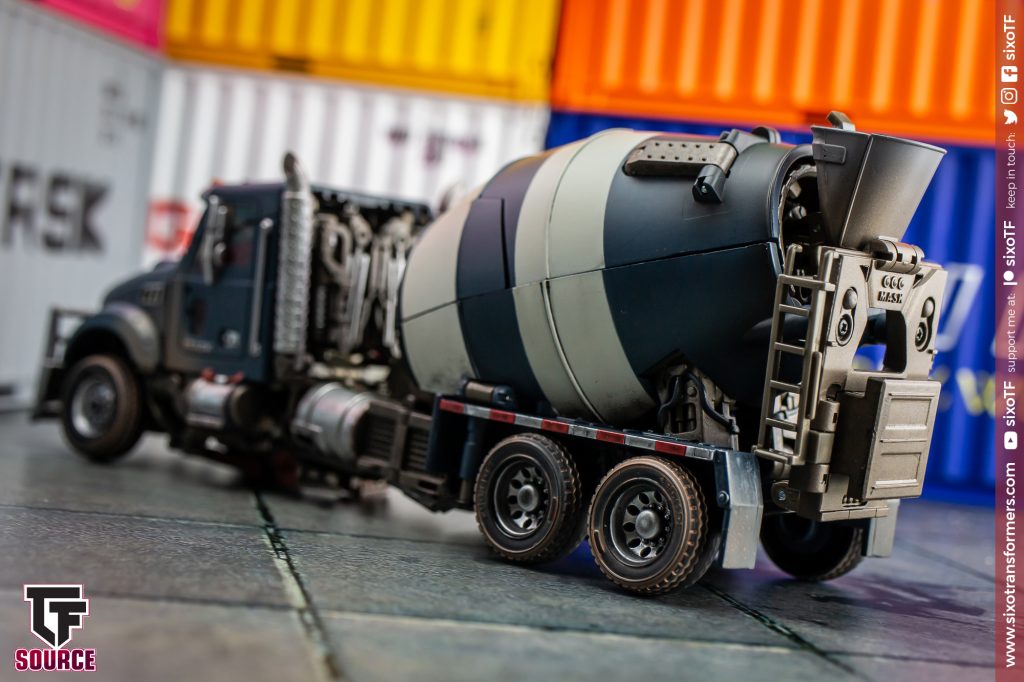 More curiously I couldn’t get the back section to tab in flush at part either, and there are even elements in the middle that I think are definitely tabbed as they’re supposed to be, but somehow their “correct” positioning leaves everything else looking decidedly wonky. The tanks on the side of the main body of the truck are pegged in place, for example, but don’t sit straight versus the cab section… so who knows? The whole experience was a bit of an exercise in frustration. 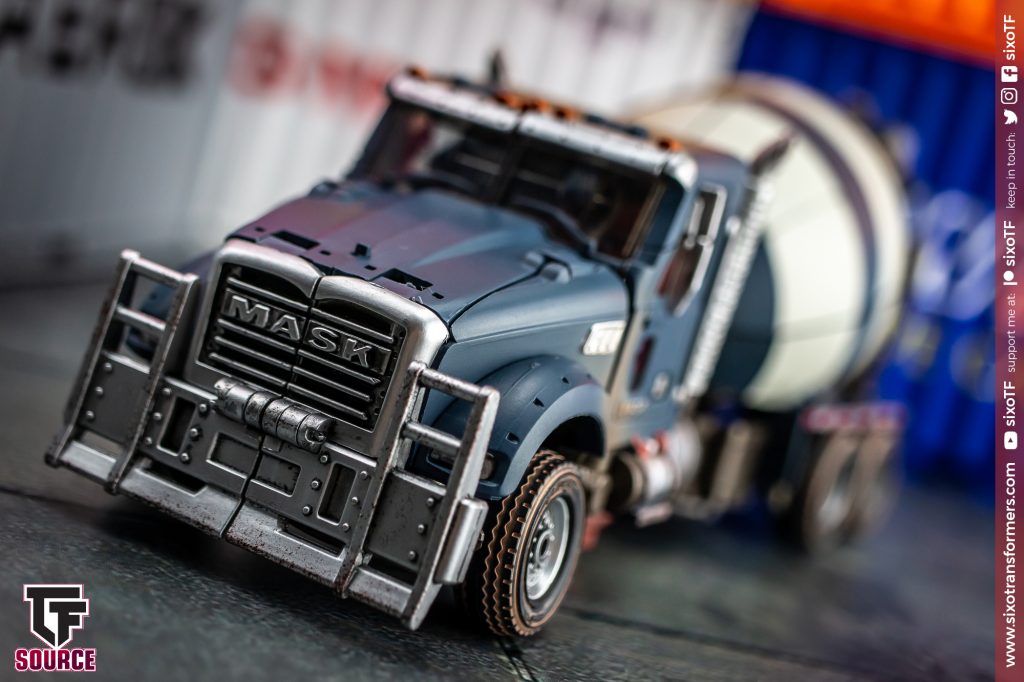 If you can look past those concerns then there are definitely elements to be admired here, most notably the attractive “weathered” paint scheme that does a lot of the heavy lifting in making this look like a premium figure. The moulded design is also really something, with lots of gorgeous detail and nice little touches such as the “Mask” logo on the front bumper (in place of real world branding, “Mack”, although one suspects it’s a fortuitous nod to the toyline of old at the same time). 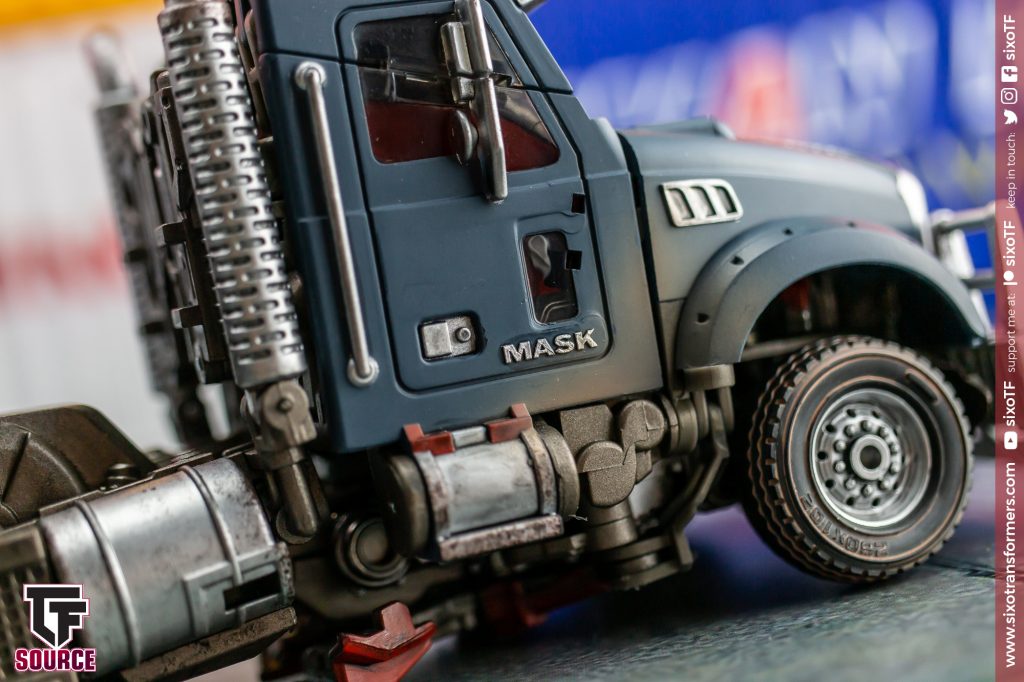 In fact this mode is so replete with detail that if it tabbed together properly it would do an exceptional job at convincing as an actual scale mode cement truck, as opposed to a transforming robot toy of any kind. The weathered detail again makes the most of sections such as the undercarriage and wheels, but even the doors and flat blue surfaces look really fabulous here. 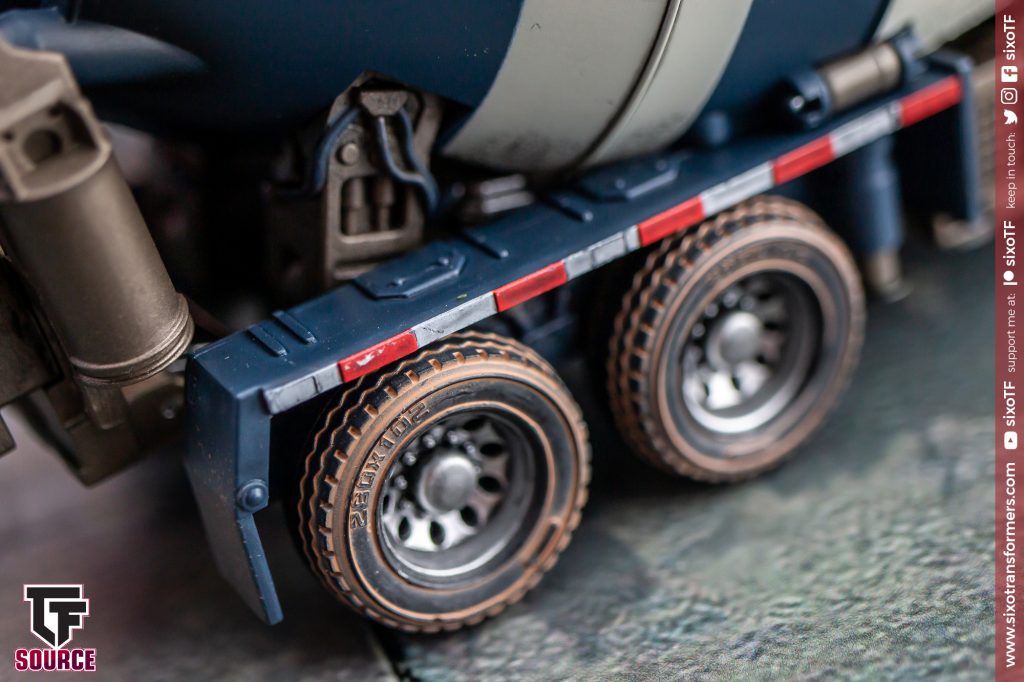 For the most part the paint applications are also very well-applied, and there are a lot of them too. Plenty of toys would have scrimped on areas such as the red and white hazard portions along the back wheel arches, but Split has that kind of attention-to-detail in spades. 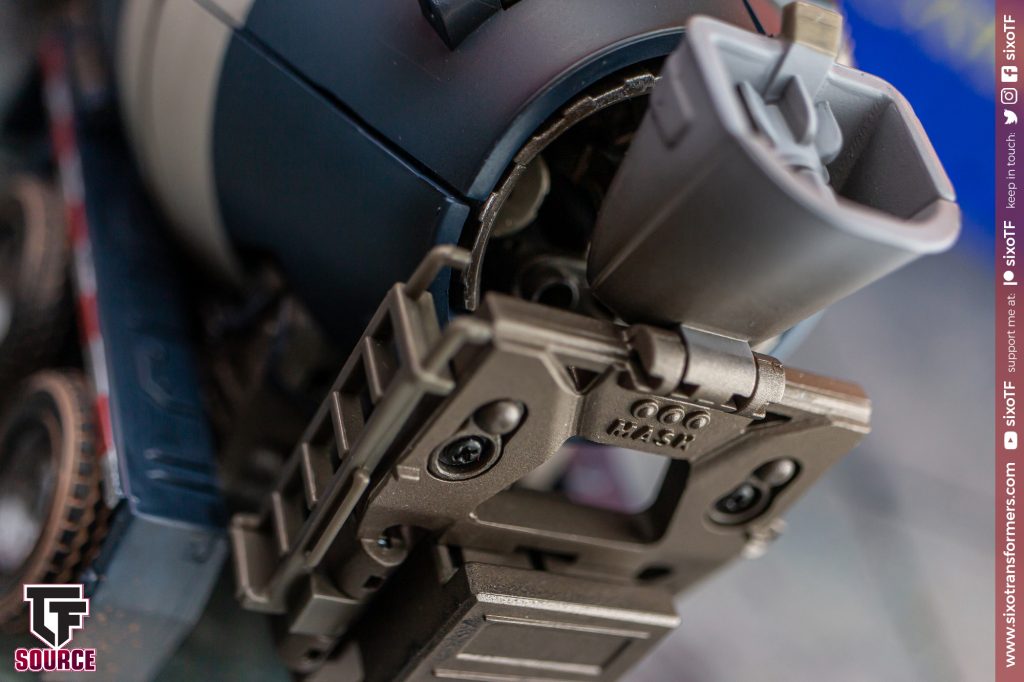 Even sections such as the rear cement barrel get a lot of focus, with more “Mask” branding and a tiny little ladder helping to really sell the real-world detailing going on here. 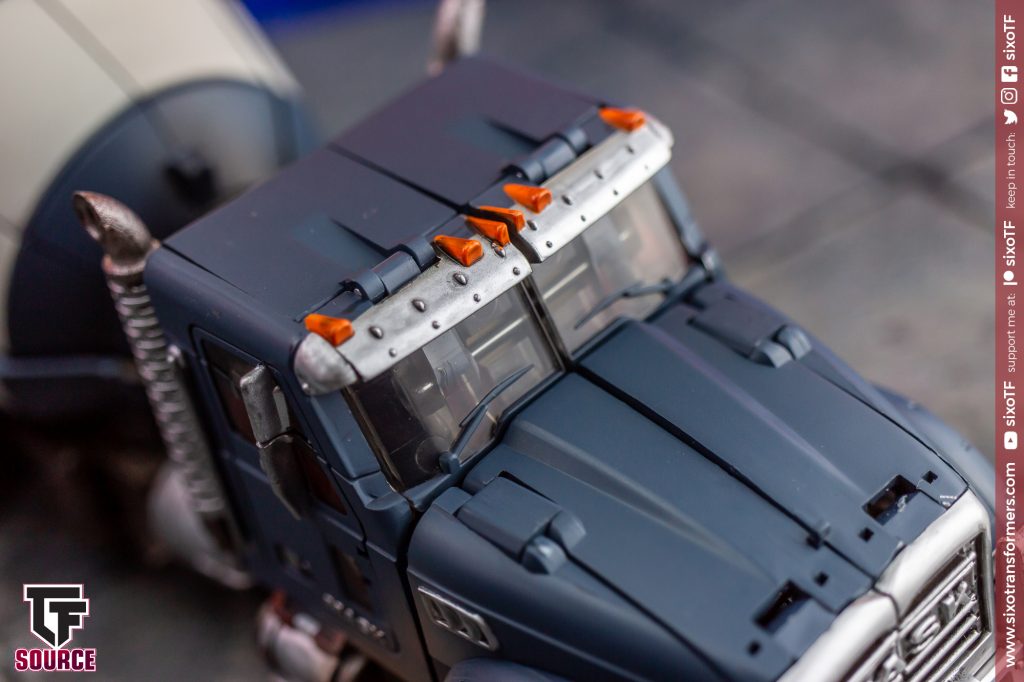 I’m also a big fan of the number of little highlights applied to help break up what is otherwise a fairly dull colour scheme on this character. Little pops of orange and red really make the design come alive a bit, and look fab. 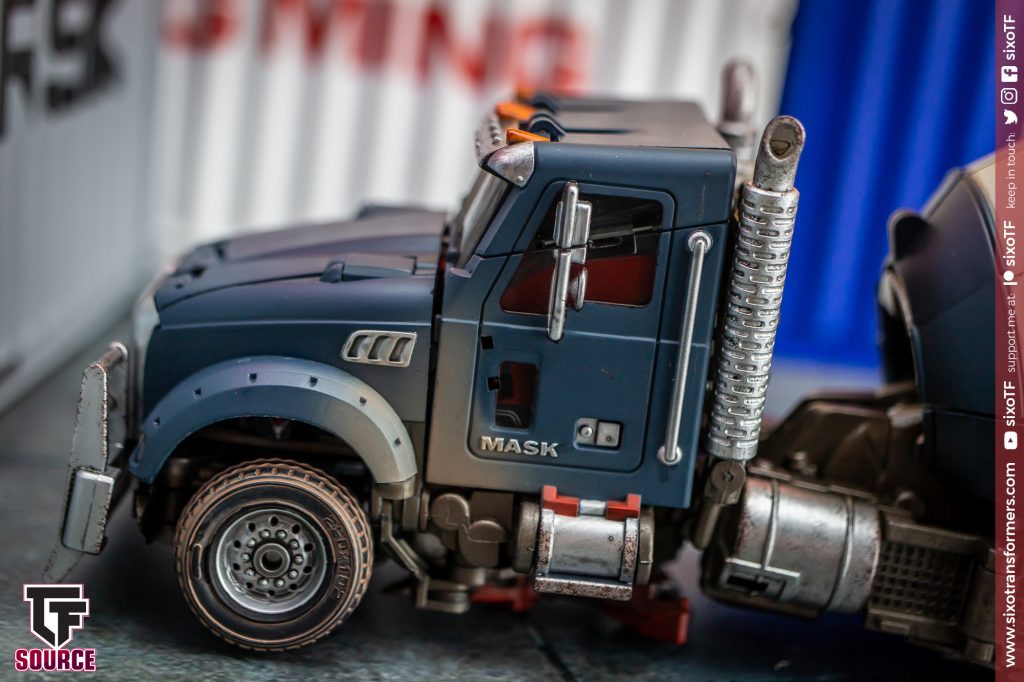 It’s just a shame then that there is seemingly no way to get the truck mode as a whole looking in any way cohesive or properly set in position. The transformation may have been beyond arduous, but somehow if the result was a complete knockout it could have almost been worth it. However, when you end up having to constantly fiddle with the final form in a desperate attempt to trying and get it all sitting flush, it doesn’t exactly inspire you to keep having a go. 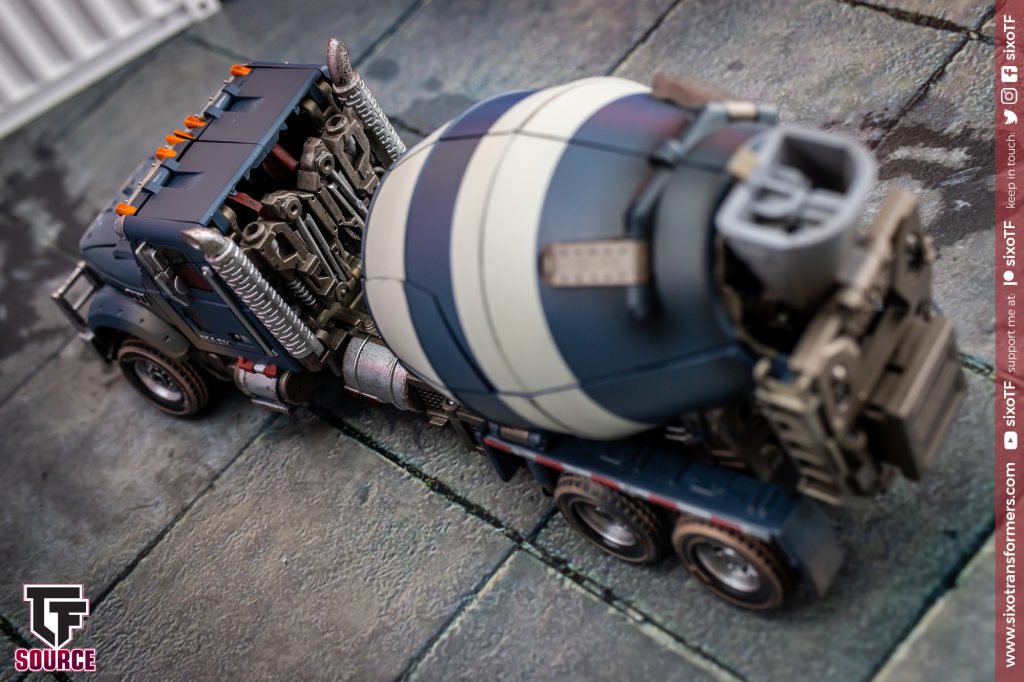 In a fairly nifty twist the small guns that come with this figure can be folded up and stored on the back of the cab section in an attempt to hide the combined mode head parts that would be sticking out otherwise. It’s not an entirely tidy solution and is probably the one obvious break from an otherwise kibble-free vehicle mode, but I dread to think what adding yet-more complexity to the transformation in order to house a rear panel section for this part would do, so perhaps it’s best! 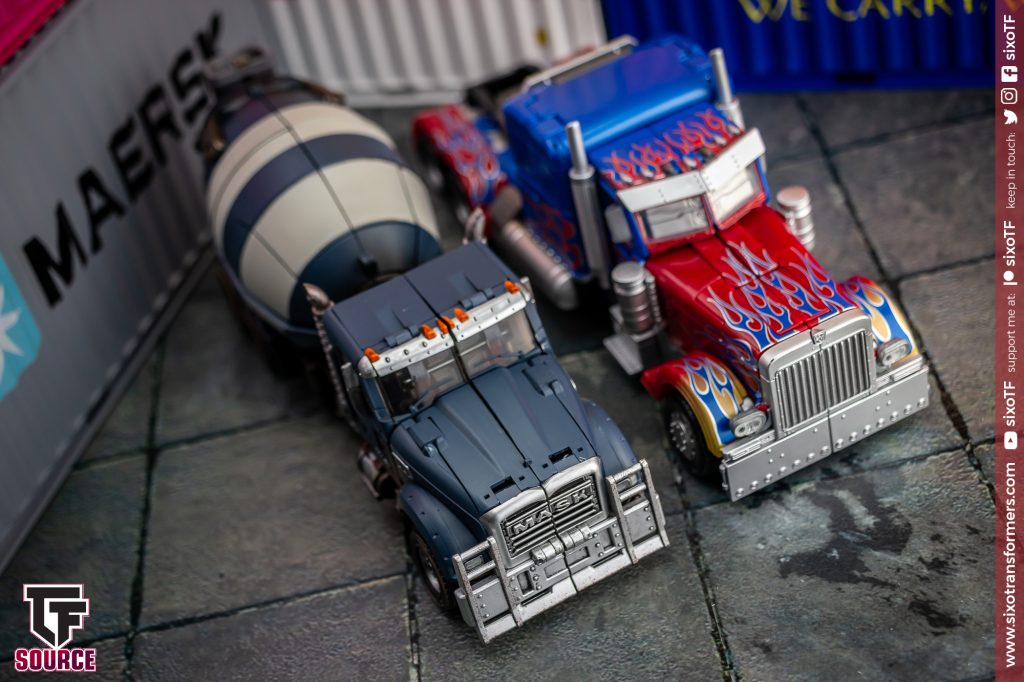 In terms of size, Split shapes up well next to the likes of MPM-4 Optimus Prime, with both cab sections looking about the same real world scale (at least to my eye!). 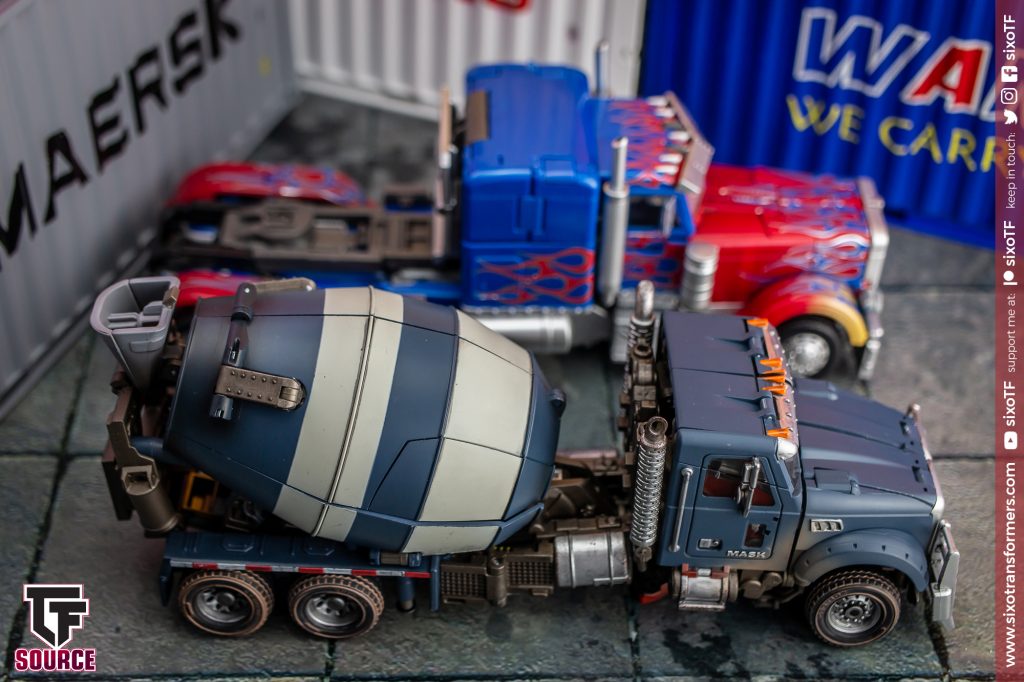 I will say that it will be an impressive sight to see the whole team of construction vehicles lined up when this set is complete, although the prospect of transforming them all one-by-one if they’re on the same level as this fella is rather wince-inducing! Let’s hope that Devil Saviour are taking notes and learning lessons as they go. 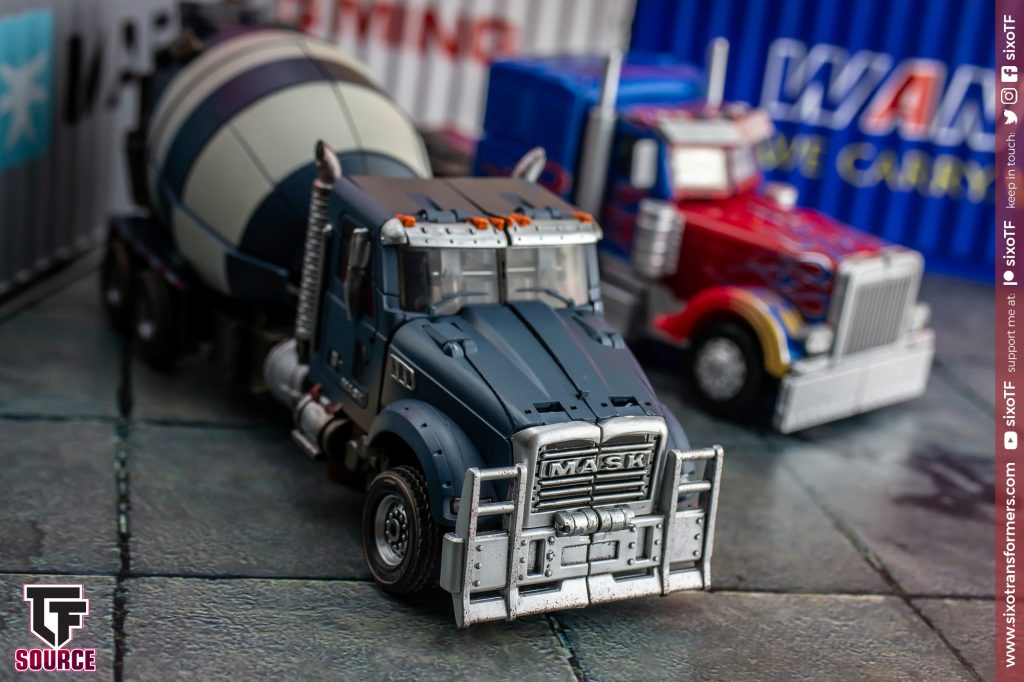 For now we can only judge on this one specimen alone, which as I say has all the right potential to be something entirely awesome but falls drastically short in terms of execution in this mode. The funny thing is that I could actually forgive a bit of messy tabbing if that were the only problem, especially as it’s not like the official line MPM toys are well-executed in this department, with Optimus himself being somewhat impossible to tab in correctly in parts. 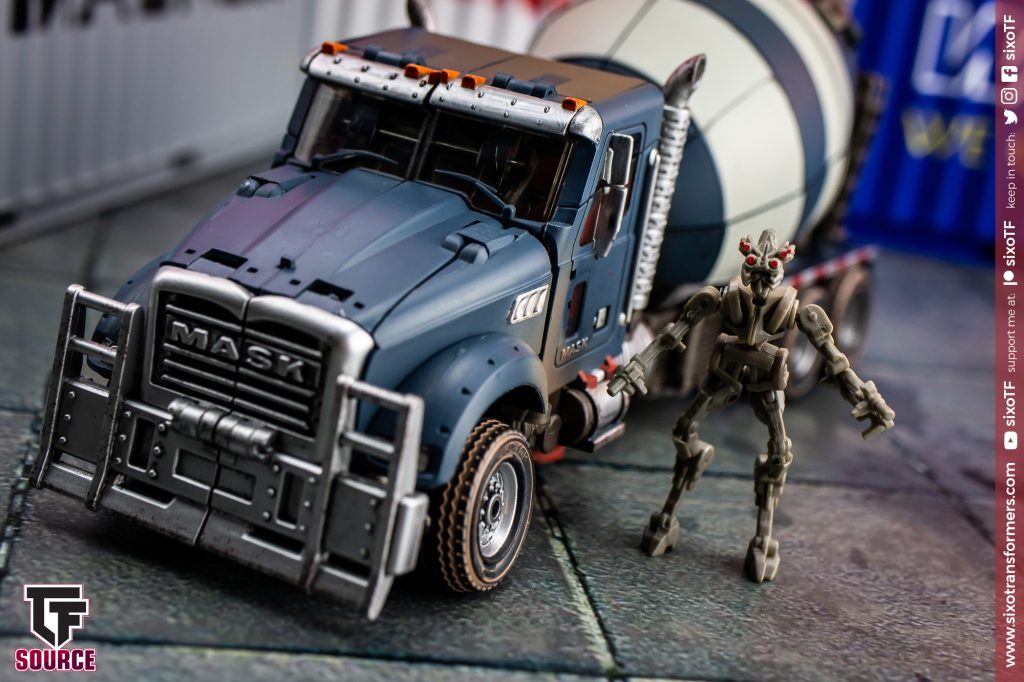 Sadly the wonkiness is all-too-evident in the finish product, and I’ve kind of reached the conclusion that I’ll just never be able to get this vehicle mode looking “just so”. Perhaps that’s compounded by me just not wanting to try too much on account of that laborious transformation scheme, but hey. 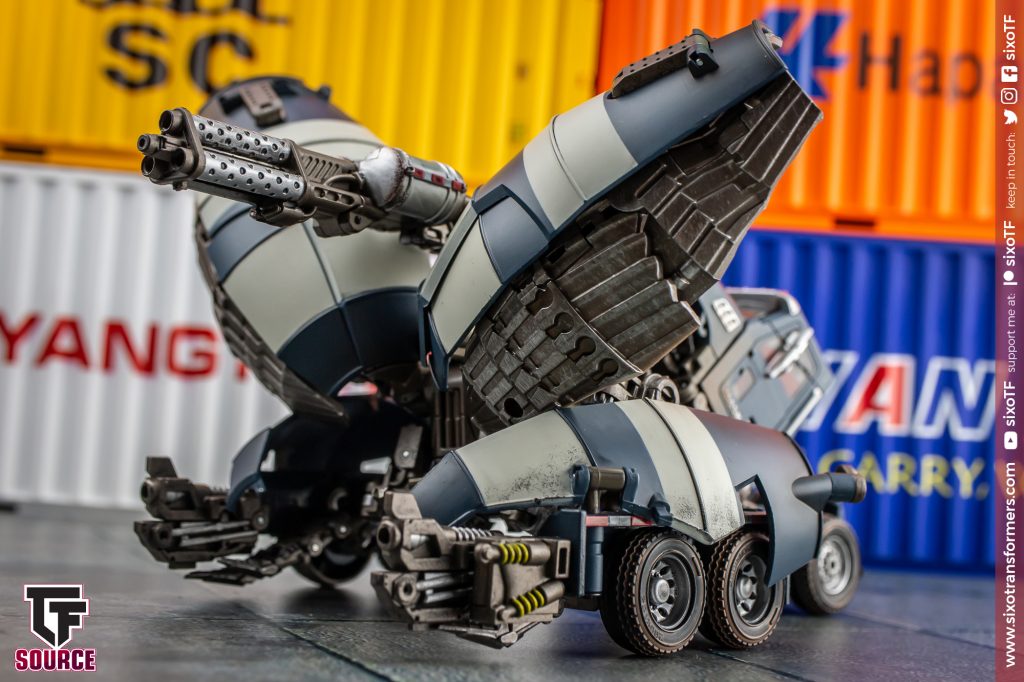 In fact I’ve come to the conclusion that Devil Saviour missed a trick by not packaging this chap in truck mode, as the process of converting him from that to his armoured cannon form is not nearly as taxing (nor as much as it is to get him from robot mode into this configuration), so they could have provided you with a perfect truck out of the box before easing you in gently with the first part of the transformation! 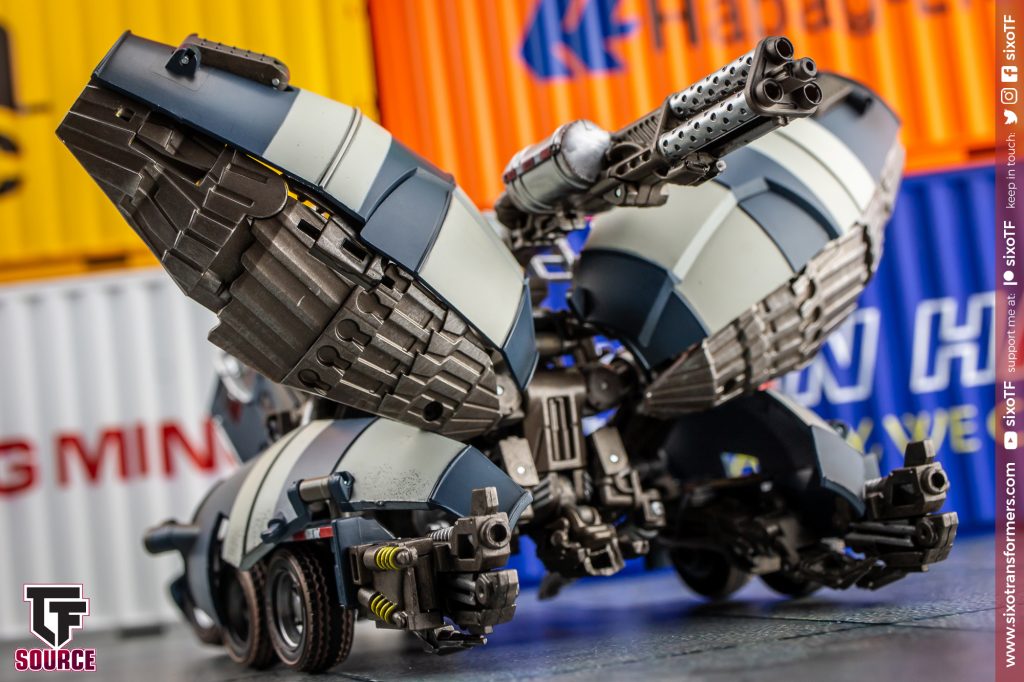 The cannon mode itself is a weird affair, although it does work surprisingly well in looking like something that could convincingly be useful on an alien battlefield, only betrayed slightly by the rather odd placement of the truck cab on its rear section. 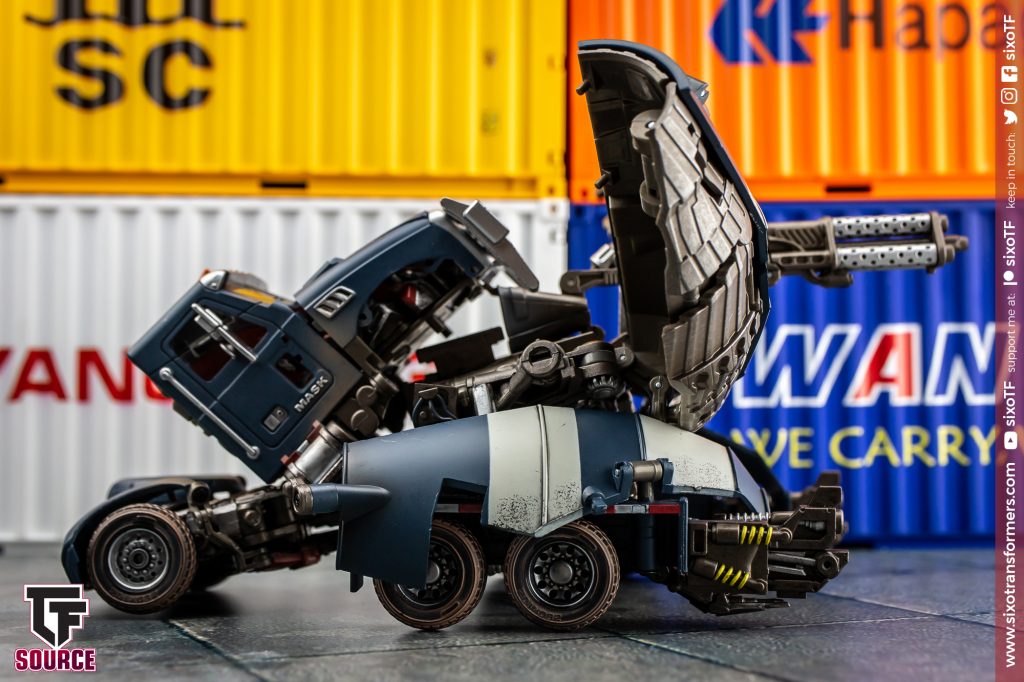 Overall though I like what they’ve tried to do with this form far more than I thought I would from the pics I’d seen, even if it’s not something I’m likely to use a whole lot moving forward. 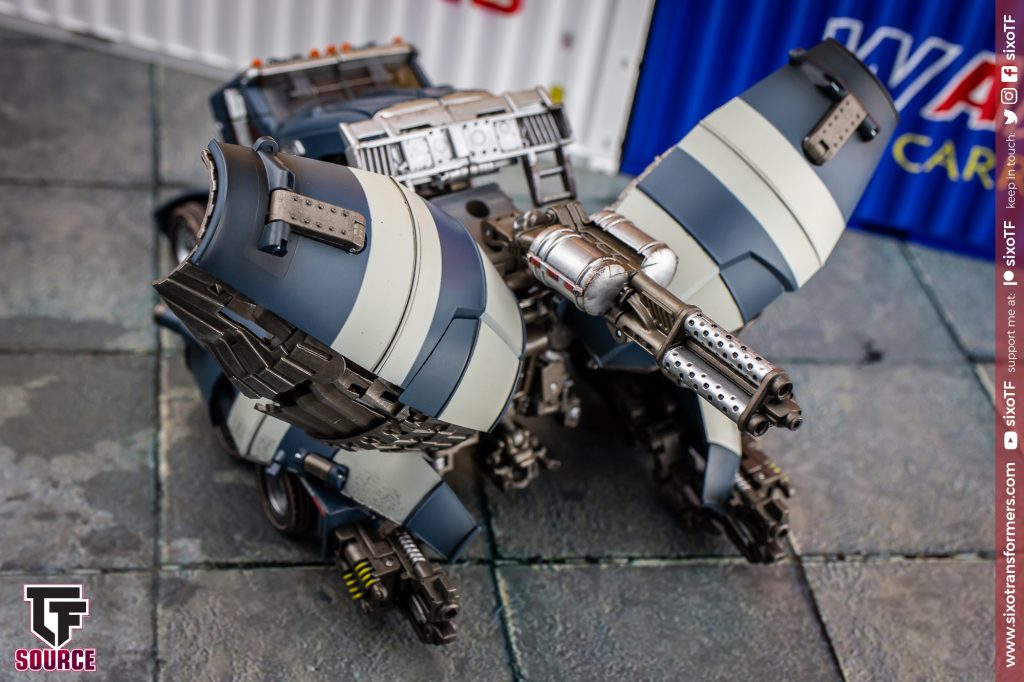 Annoyingly, the tabbing issues continue to be a problem here though, as despite my best efforts I just couldn’t get the butterflied sections of the cement mixer to tab together in the middle as they’re supposed to. Between the arms they’re tabbed onto and various other moving parts the whole thing is rather perplexing in terms of how it’s supposed to be accutely configured, although I didn’t find that to be a major problem as everything sort of sits where it’s supposed to anyway. 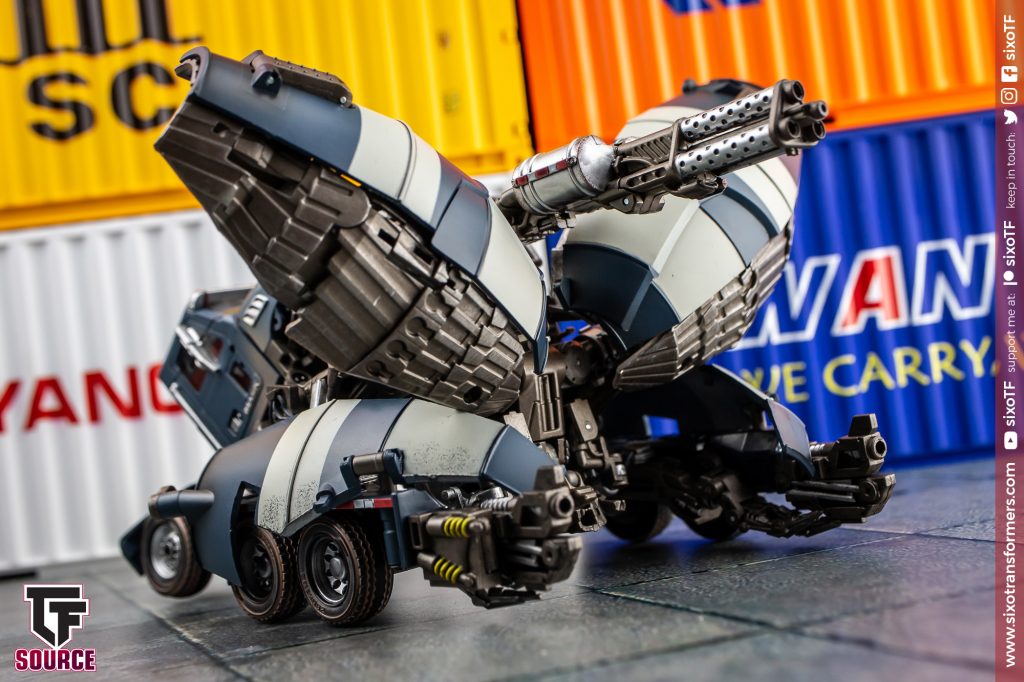 It’s also worth noting that the gun accessories here will not stay properly tabbed in to the slots at the front, and so having them in place is a sort of exercise in hope more than anything. 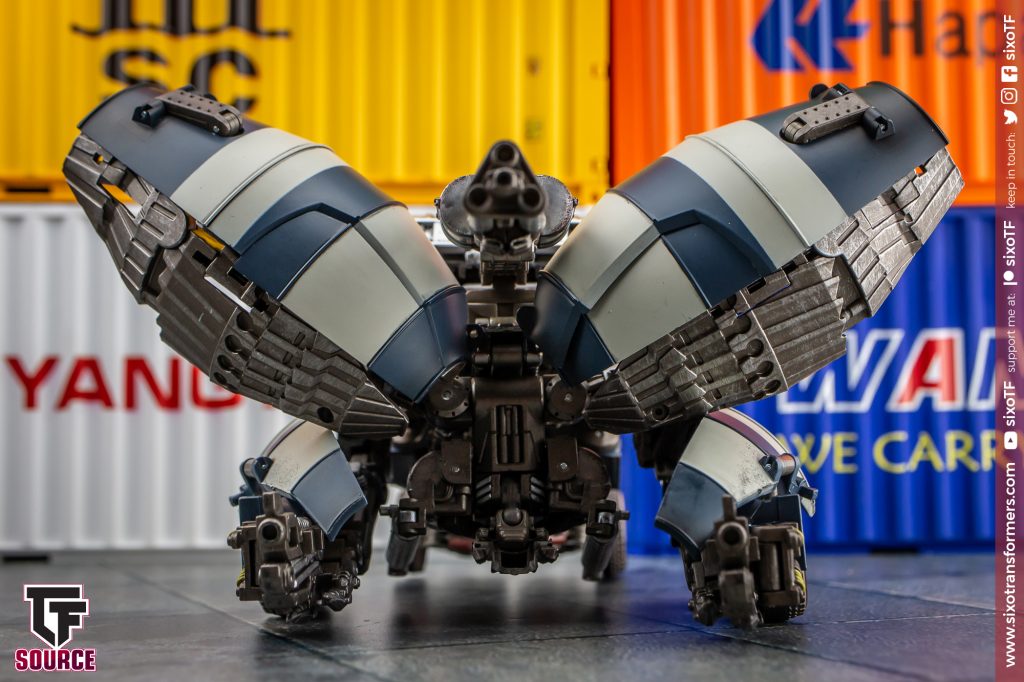 Right, it’s probably time to properly address the elephant in the room, which is that unfortunate breakage that happened during the transformation in my unboxing video. One of the “wing” sections broke off entirely, snapping at the small joint that holds it to the arm. It was as a result of that joint having to deal with a lot of stress whilst the wing sections are being contorted back and forth during conversion, so whilst I reiterate that I’m fairly certain there was a degree of user error on my part I don’t think I’m entirely to blame! Fortunately it seems to have been a relatively clean break and I have since glued everything back together, although I’m still really nervous about it and am having to be extraordinarily careful with how I manipulate that section. 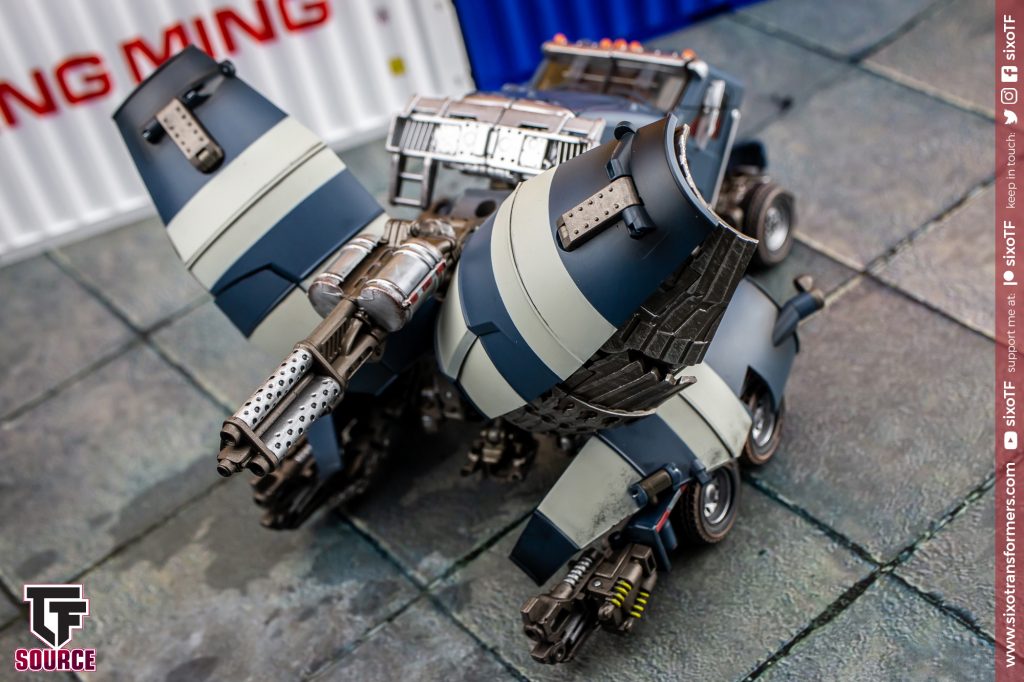 Ultimately we’ll have to see how it holds up, but really it’s not a great indictment for this figure when you consider it on top of the transformation woes and tabbing problems and it has definitely left me with a bit of a sour taste in regards handling this toy too much. 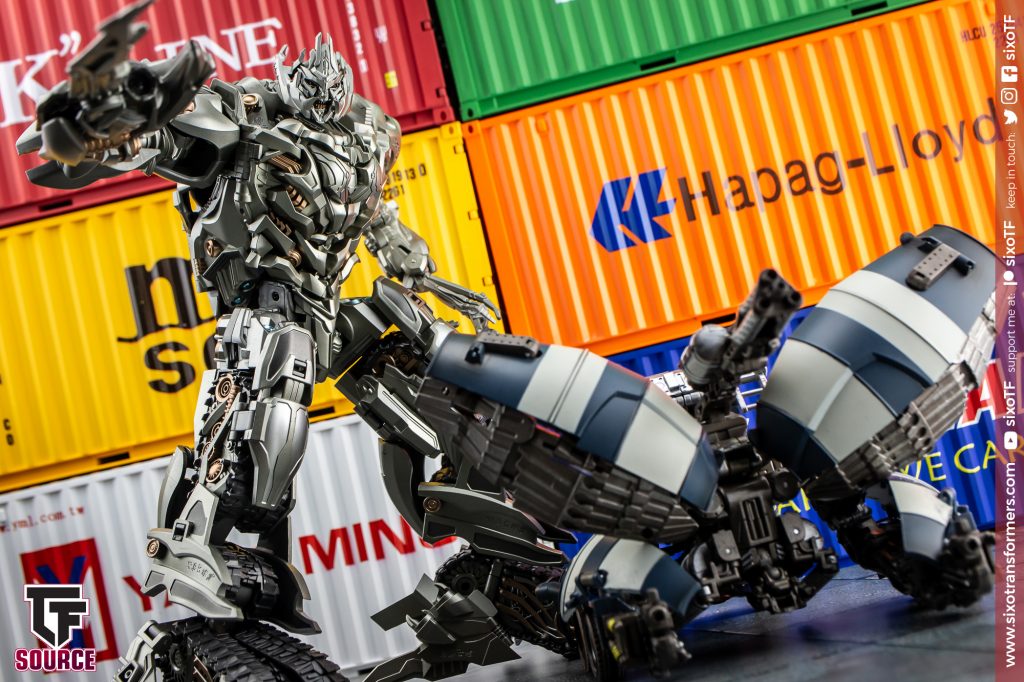 So anyway, that’s the first two modes done! Next time we’ll be taking a look at the robot and combined forms to see how we get on with those. Let’s see if he can win me over yet!

This entry was posted in Source Reviews Tagged with Bayformers, Devil Saviour