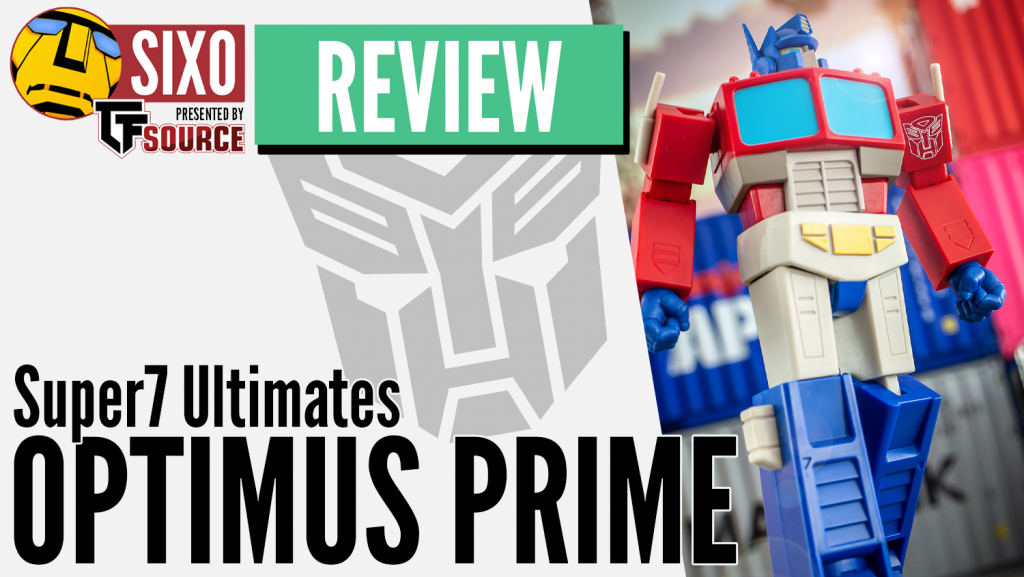 I mean, there are more than a few of them now. In recent memory alone, we’ve had various threezero efforts, a non-realised Kickstarter chess piece and the R.E.D. version from not so long ago. Oh, and just yesterday, I reviewed a somewhat fruity third-party specimen, too. 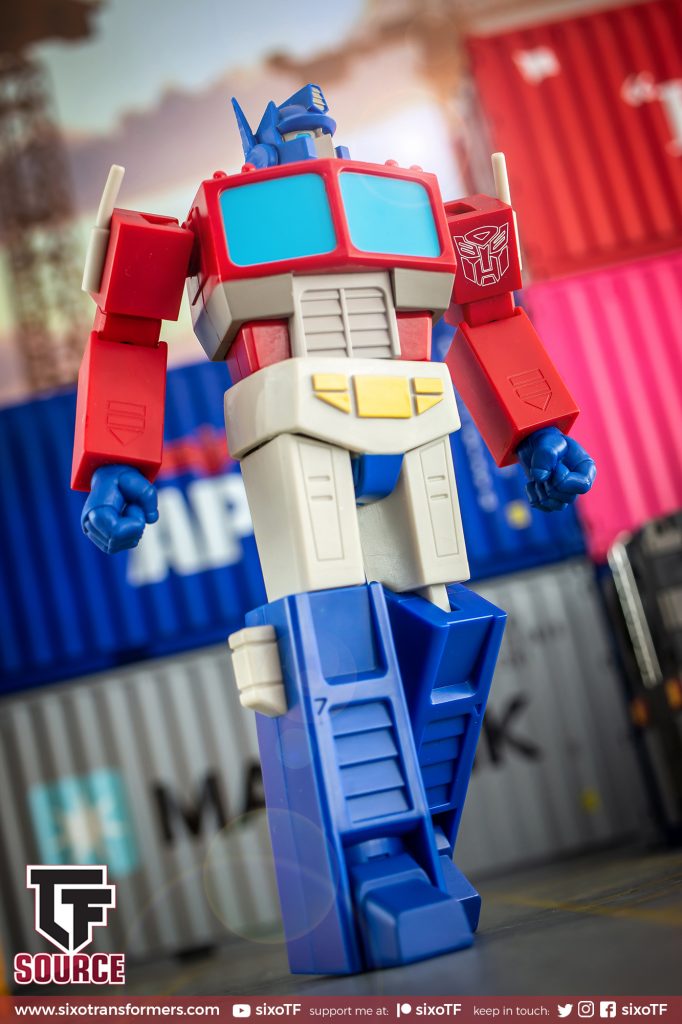 Not that the idea is anything new, mind; we’ve been accustomed to non-transforming Optimus attempts for years. Yet here we go again with this official attempt from Super7, a well-known toy manufacturer with licenses for pretty much every popular franchise under the sun. Even Voltron! 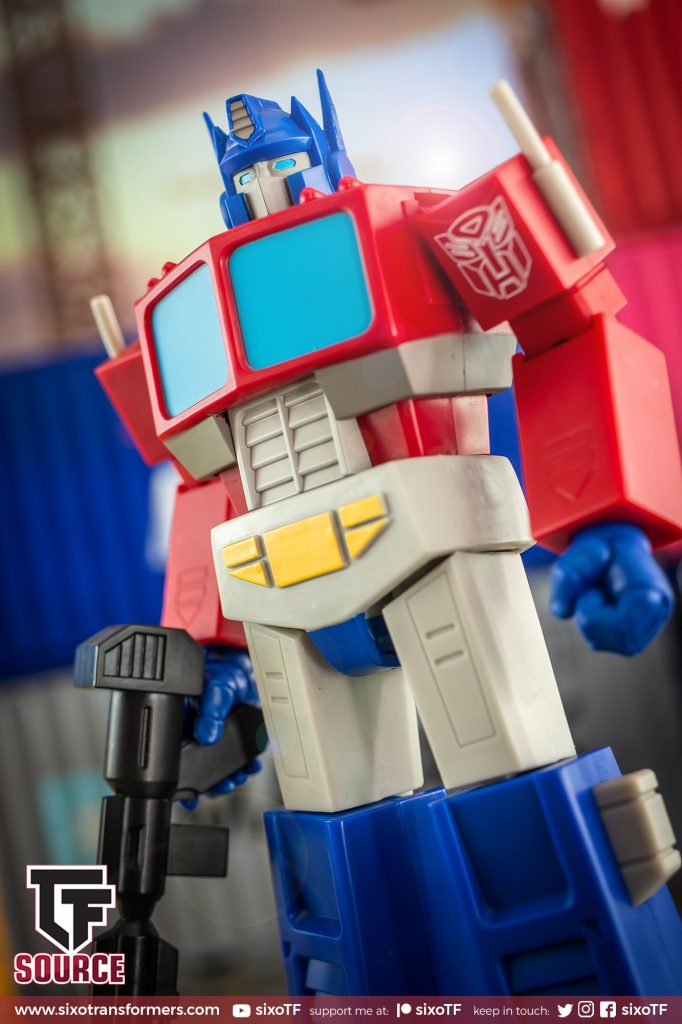 I kid, I kid. Although that does give some indication of the depths Super7 has already plunged in bringing such properties to life. So why has it taken this long to get to Transformers? No idea, to be honest, but it’s tremendously exciting now that they have! 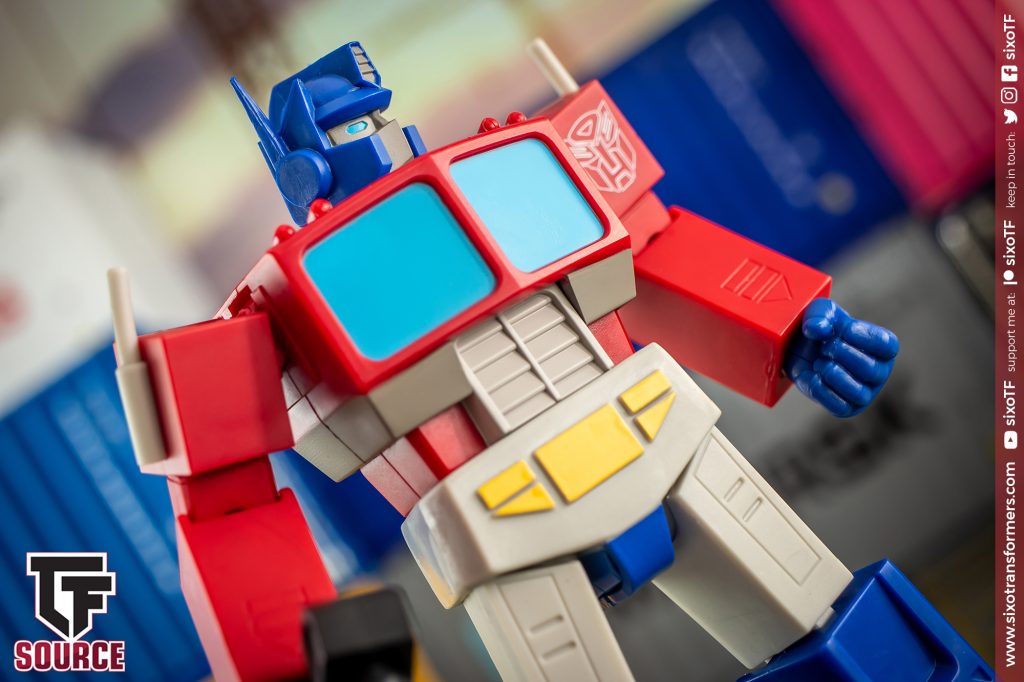 Their ‘Ultimates’ range is already well-established and includes stylised renditions of characters from Thundercats, TMNT, and G.I. Joe, amongst many others, so it seems like the robots in disguise are a very natural fit at first glance. Oh, and of course, we’re kicking off with the big dog himself because who doesn’t love a good Optimus Prime? 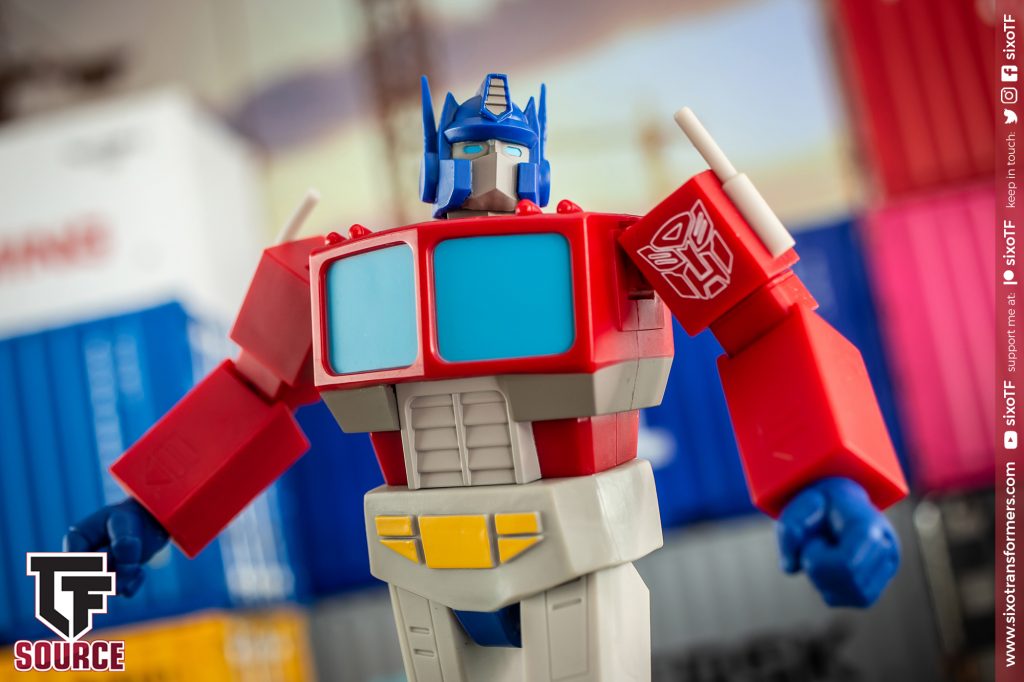 In this case, the Autobot leader has been made to resemble his famed cartoon model from the 1980s Sunbow cartoon, which in many minds is undoubtedly the ultimate (eh?) rendition of him. It also plays nicely into Super7’s core style, with softer edges, a ‘flat’, simple finish and lots of block colours. To say it looks like an animation cel is almost an understatement. 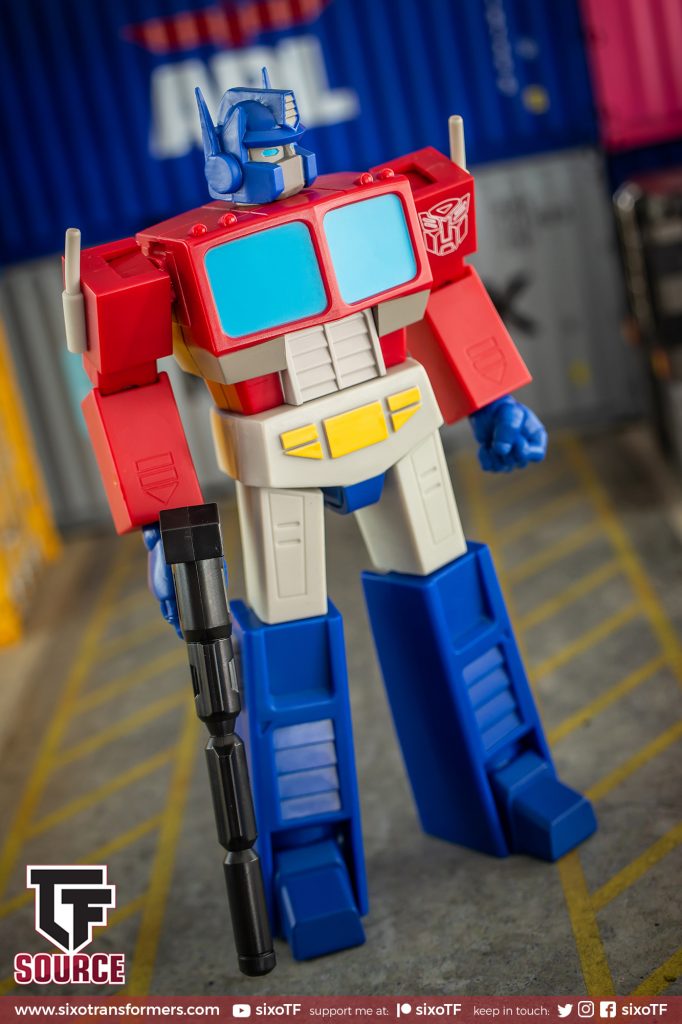 In truth, I’d argue the result is still slightly stylised, despite hitting those Sunbow notes pretty hard. The proportions are a little less ‘heroic’ than you might see on-screen, and somehow he almost looks more ‘simplified’ than even the cartoon itself. 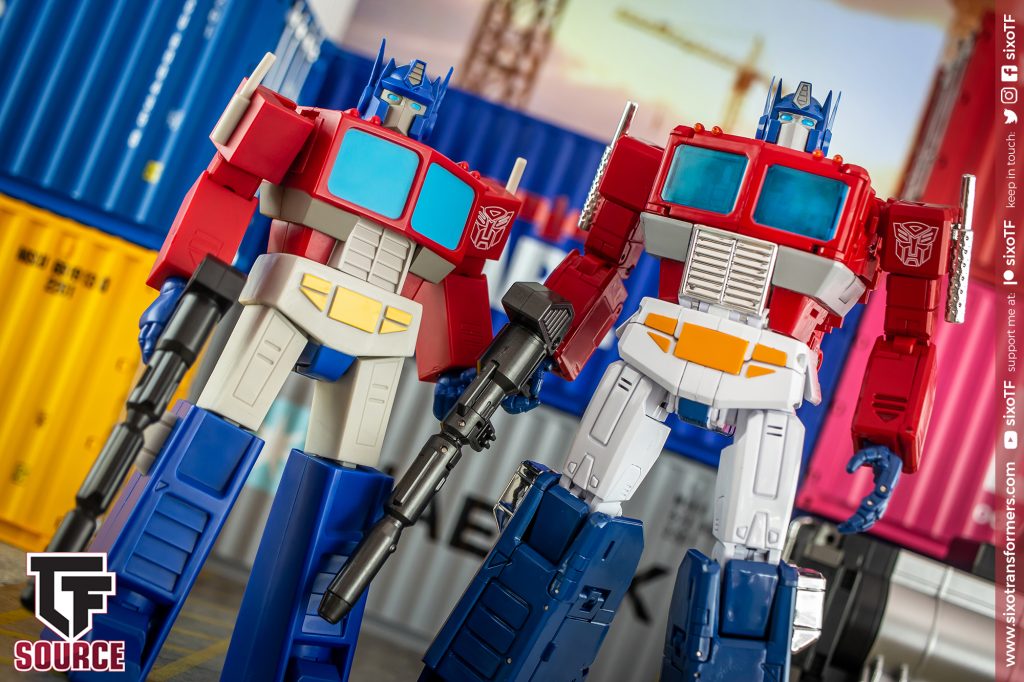 Perhaps that’s best demonstrated with a straight-up comparison to TakaraTomy’s own MP-44 Convoy, which in many ways is the most screen-accurate rendition of the character in toy form thus far. That pays slavish levels of attention to Optimus’ animation model and somehow leaves Super7’s attempt as an ‘ultra toon’ attempt of sorts. 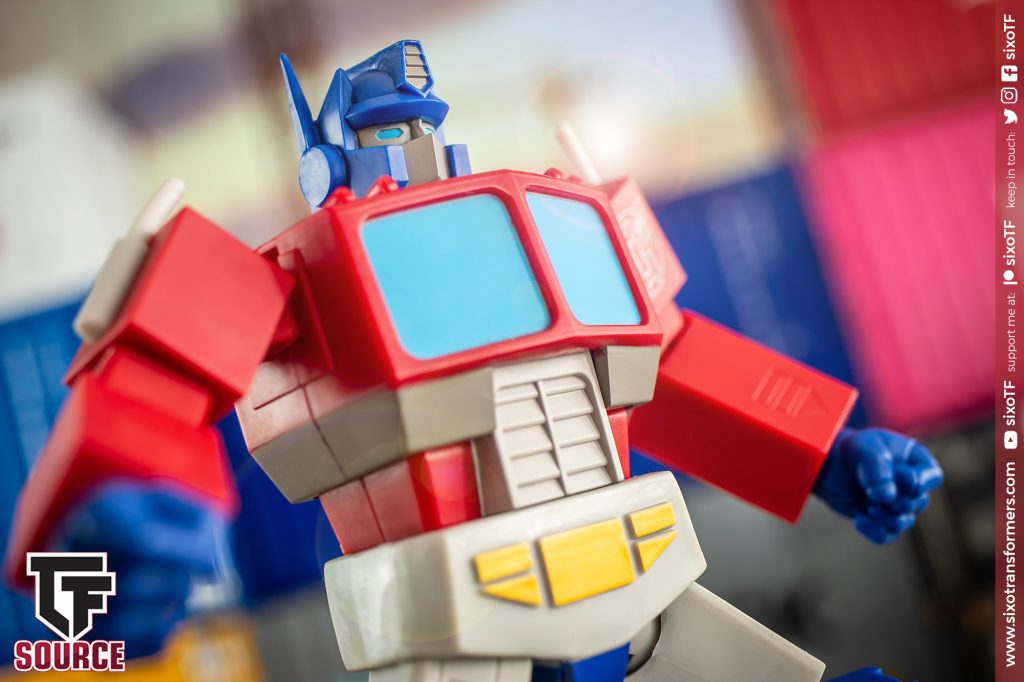 Still, it works, and considering how iconic Optimus’ original form is, it’s impossible not to get at least a little thrill from seeing him realised in such fine form here. There’s certainly an appeal to the blocky, uncomplicated style that the Ultimates line affords. 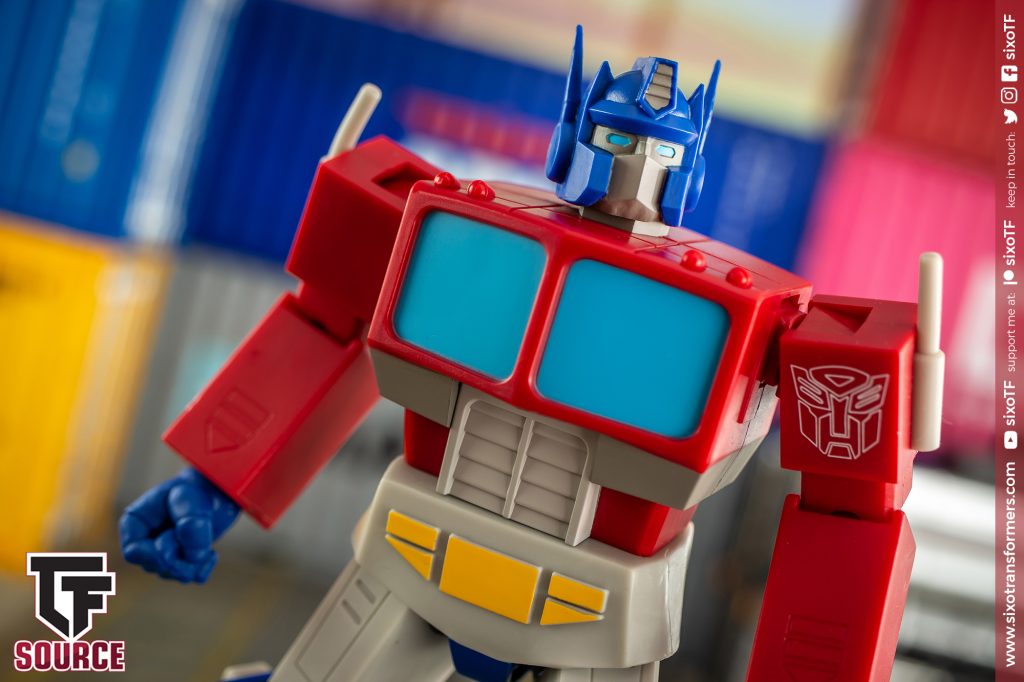 Build-wise, it all feels pretty solid, with a nice weight to the figure despite the softer plastic used for much of it. Again, the finish is quite simple, with only sparse paint application, but what there is looks mostly decent. I noted one or two small imperfections when I looked for them, and the bare plastic has the odd scuff in it too, but overall, this figure presents pretty well. 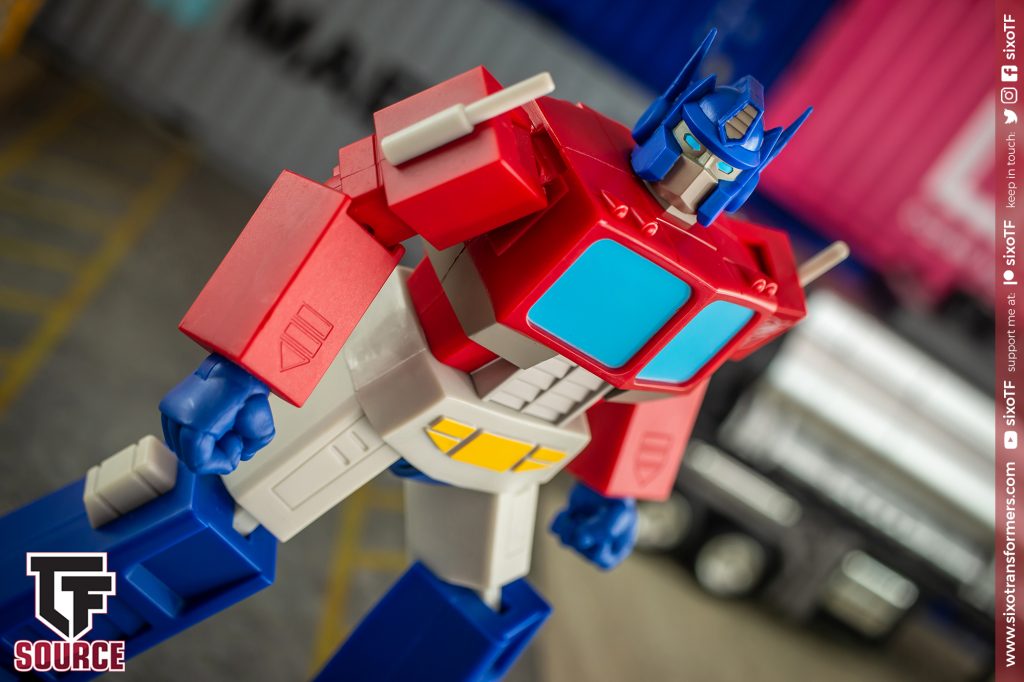 The joints also seem nice and tight, but no doubt where people will grumble about this guy is the articulation. Super7’s Ultimates have never been known for being the most poseable figures on the market, but there are at least a few points on Optimus which feel bizarrely hindered. For example, you can get a good ninety-degree bend at the knee, but the hips will only allow about forty-five degrees because the soft hip skirt impedes them any further. Similarly, the design of the ankles clearly allows for a decent tilt, but the sides of the legs make this impossible, meaning the feet are relegated to moving up and down only. Weird. 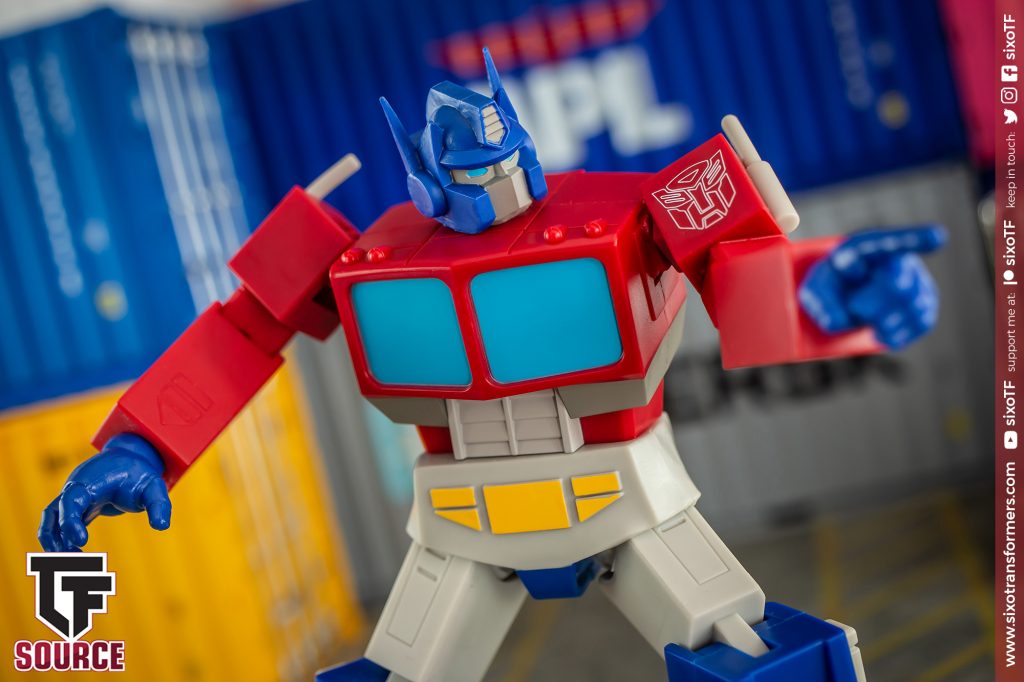 It’s a similar story in the top half, with some excellent range of motion in the multi-jointed shoulders, but then barely even forty-five degrees again at the elbows because of the forearms getting in the way. That last example is the real killer, in my opinion, as it makes the overall poseability of this figure take a definite knock. 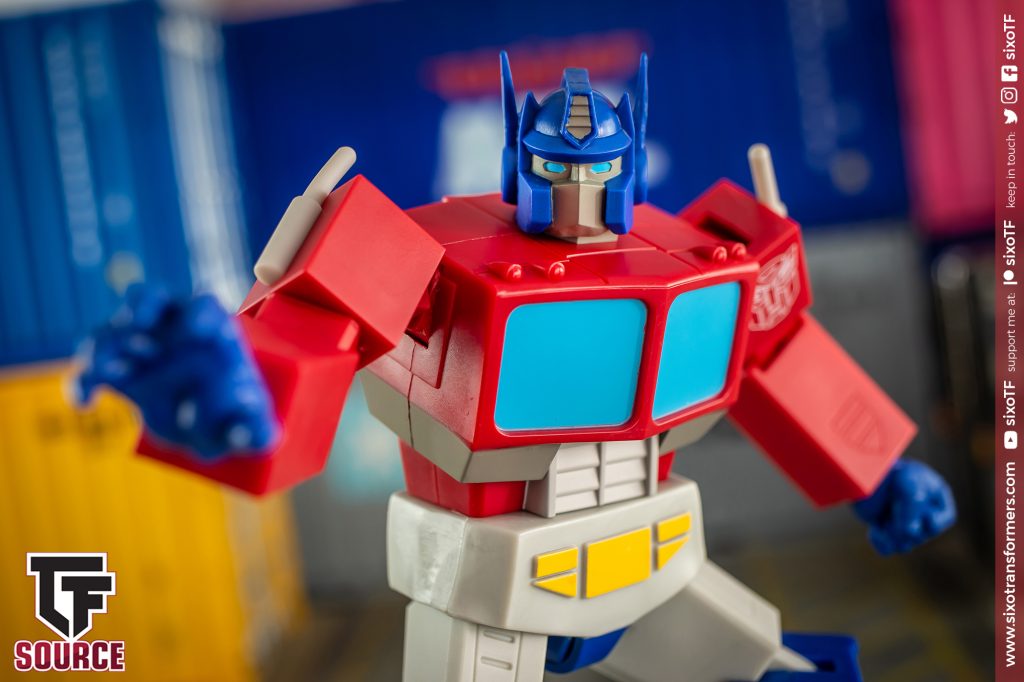 Still, the toy is expressive on the whole, not least because of the swap-out options for the hands. They’re mostly useful in terms of how they interact with the various accessories on offer, but you can get a decent point or grab out of Optimus, should you wish! 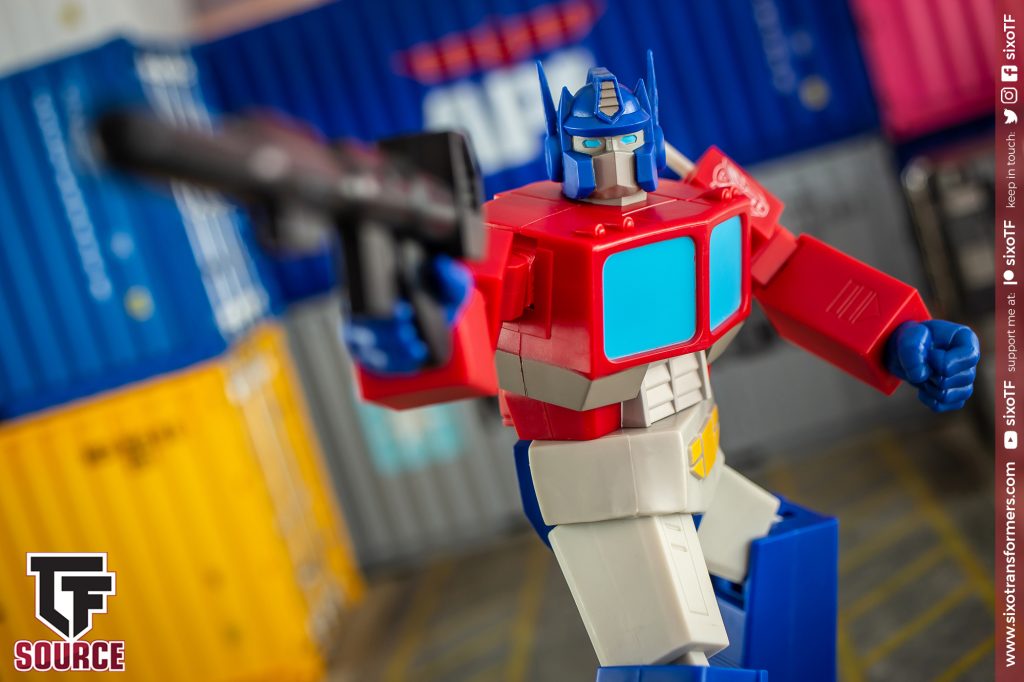 Naturally, the first accessory is Optimus’ rifle, which fits reasonably snugly into the appropriate gripped hand. It’s not an ideal fit and even requires a bit of a squeeze to get it in there, but once you’re done, the whole thing holds well and looks great, in my opinion. I can almost hear the noise of it being fired just by looking at it! 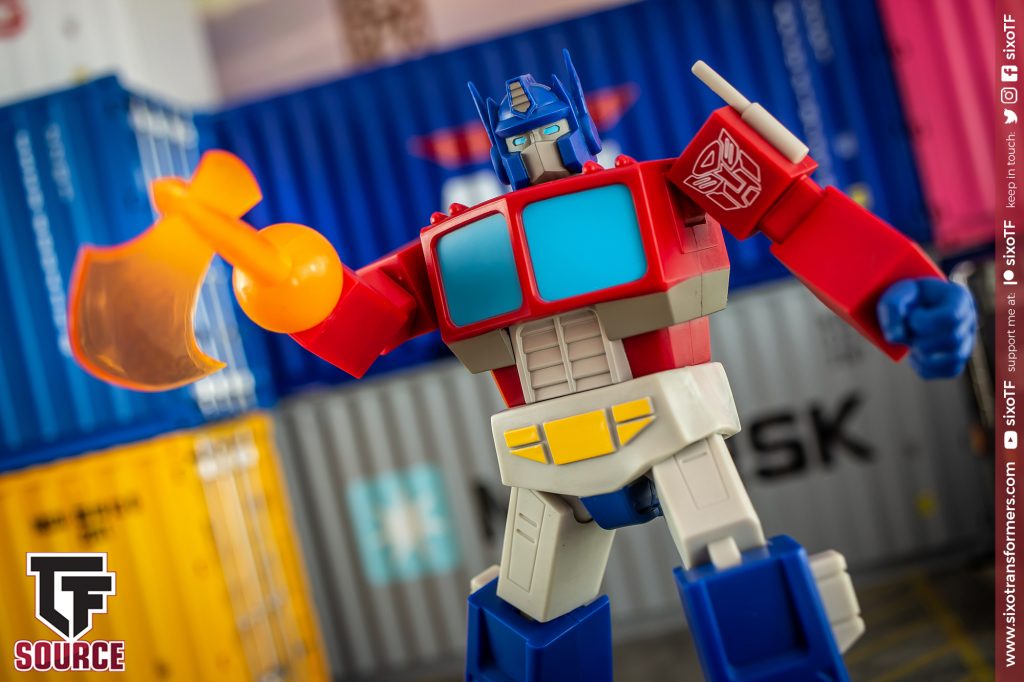 In terms of weapons, there’s also the battle axe from the cartoon’s three-part pilot episode, which anyone who’s ever collected a Masterpiece Optimus Prime figure will already be overly familiar with! Still, this option works nicely and catches the light with a pleasing shine. 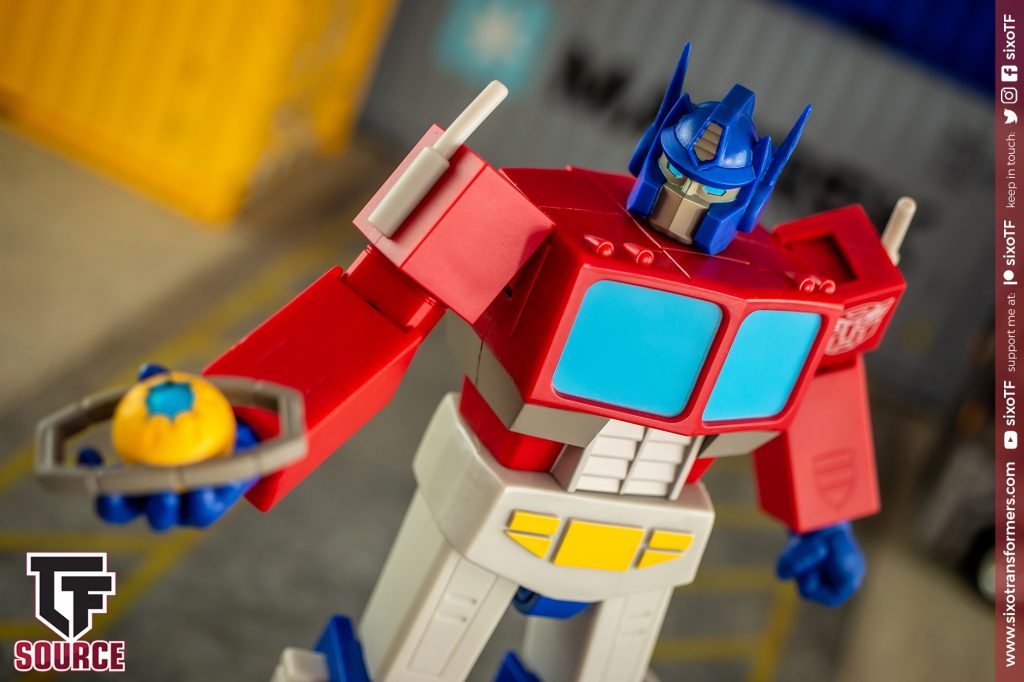 Next is a Matrix of Leadership, because of course! It can’t actually fit inside Optimus’ chest here, given it doesn’t open, but it can be held in his open palm to great visual effect. Just the thing for when it’s time to light your darkest hour or whatnot. 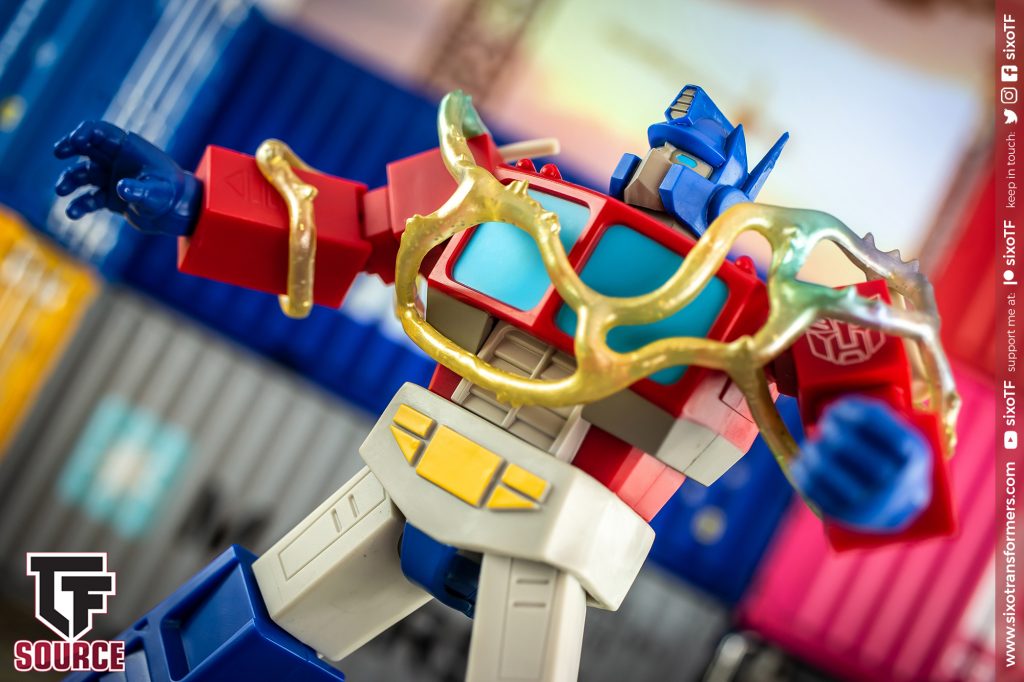 Then we have what is apparently an ‘energon net’, which essentially fits over Optimus’ main body to look like he’s been captured somehow. I must confess the reference for this accessory escapes me, but whatever the case, I think it looks neat and it’s a bit of fun. The smell of it is rather funky, however! 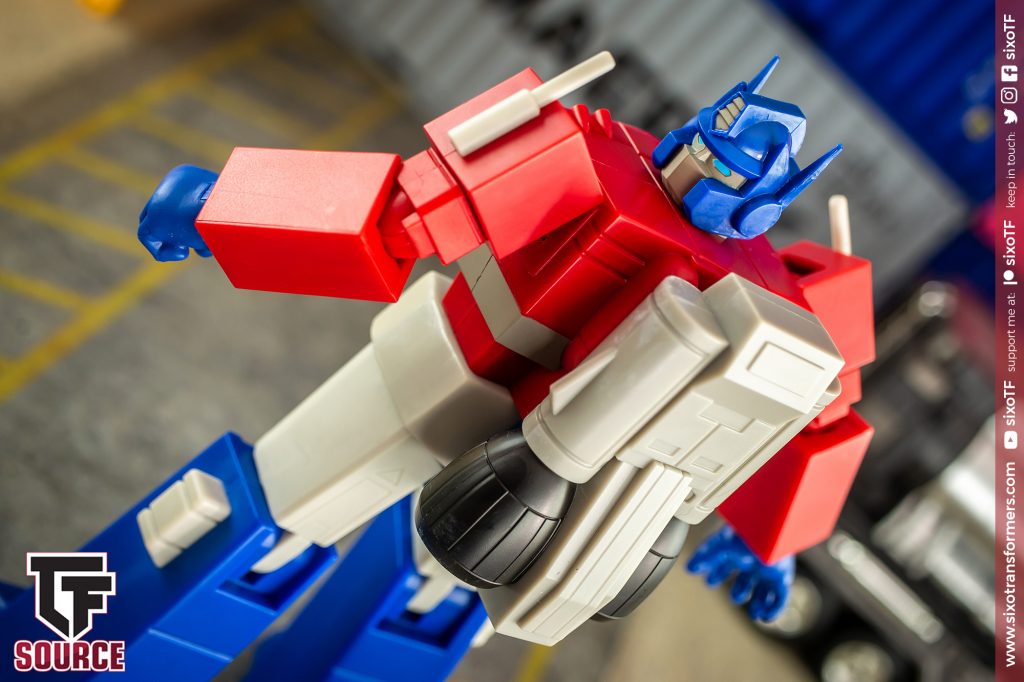 Speaking of the cartoon’s pilot episode, Optimus can also wear the jetpack he uses to chase after the Decepticons’ spaceship. It slots neatly into a groove on his back and presents nicely, despite being grey instead of the red seen in the animation. 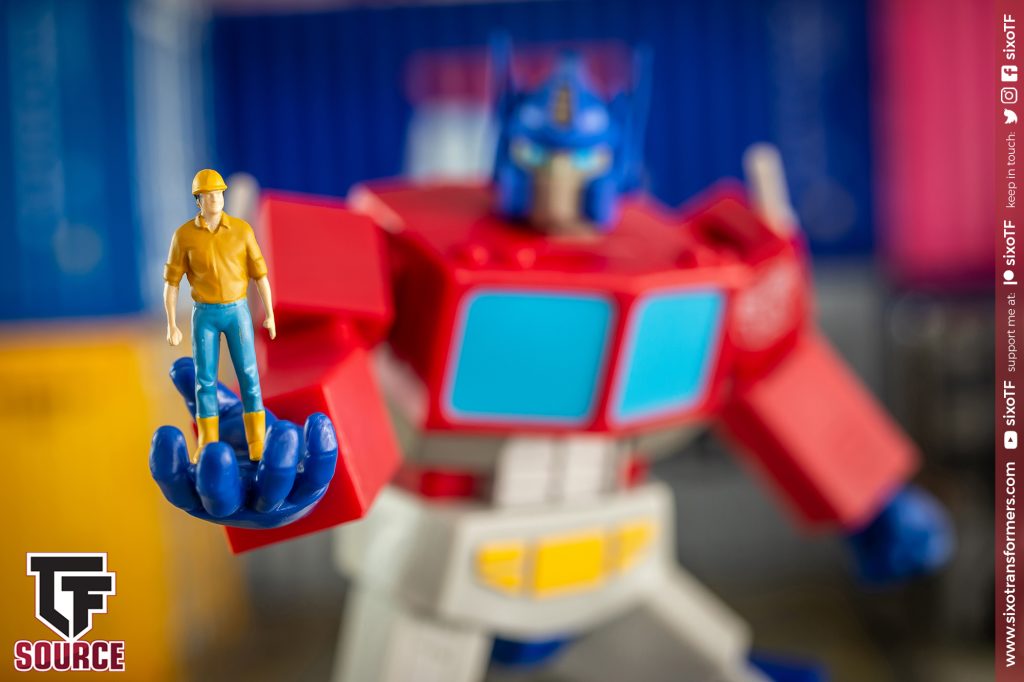 Another inclusion sure to be familiar to cartoon fans is a miniature Spike Witwicky, seen in his construction outfit from those first episodes. Well, at least I assume it’s meant to be Spike and not his father, Sparkplug, as the features are a little nondescript. He’s also sporting a weirdly-coloured brownish top instead of the more expected white, so I’m not sure what that’s about! 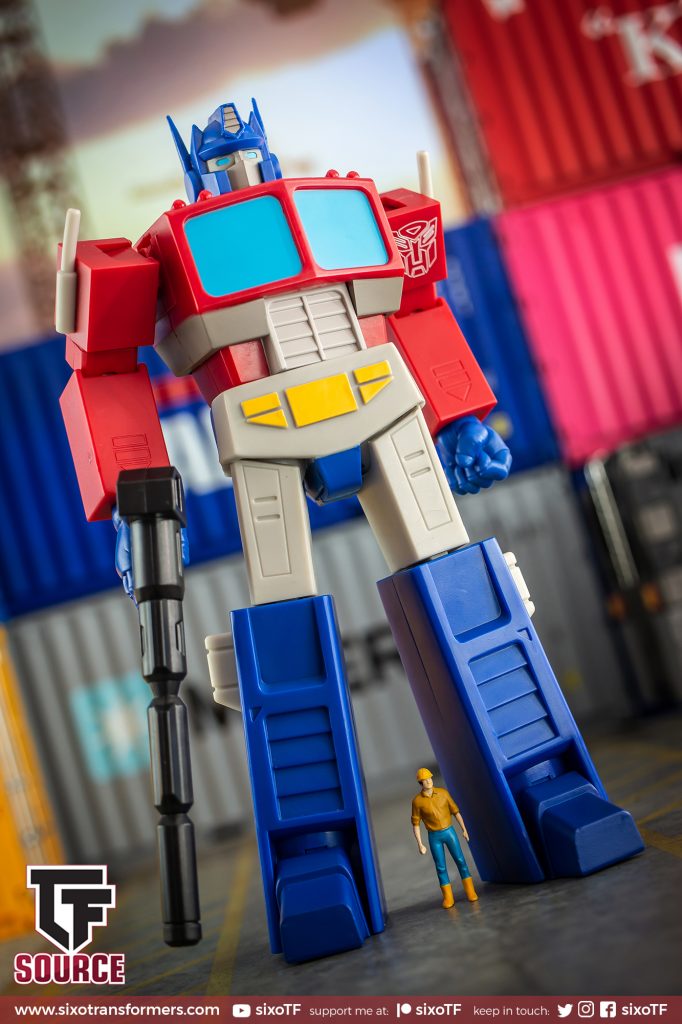 Regardless, it’s a nifty little inclusion overall, and whilst it may lack the articulation on some of the Masterpiece equivalents, represents a decent effort from Super7. Ultimately the two heroes look good alongside one another. 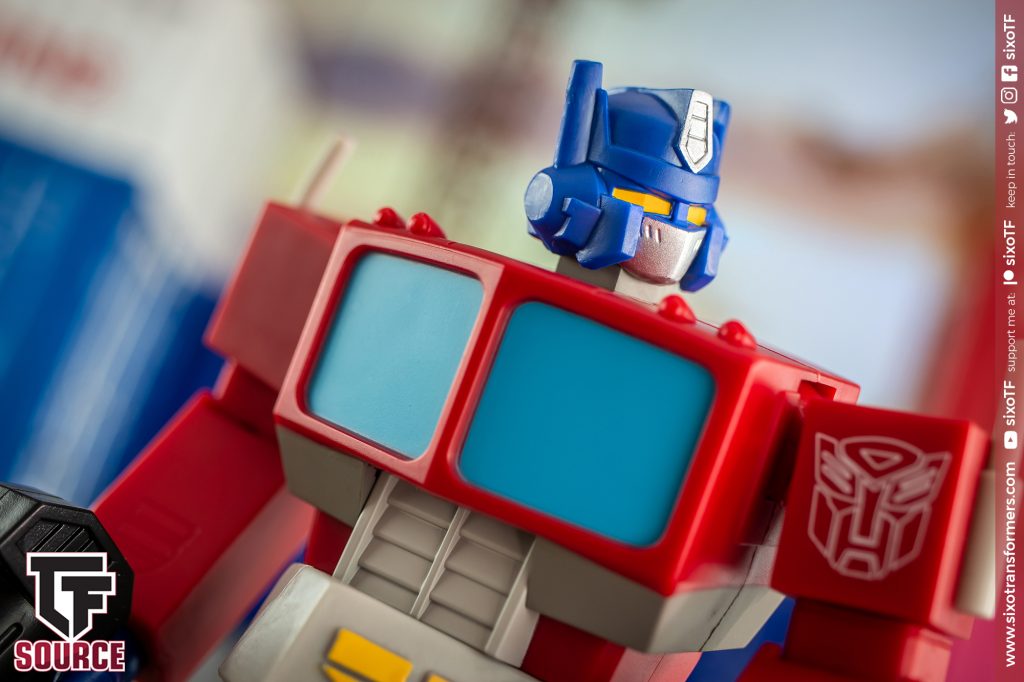 There’s more, though, as not content with bringing to life an ultra-cartoony take on Optimus, Super7 has also packed in an optional second head as a nod towards his classic 1984 G1 toy. It follows a similar style to the rest of the Ultimates figure but gives it a very different vibe! 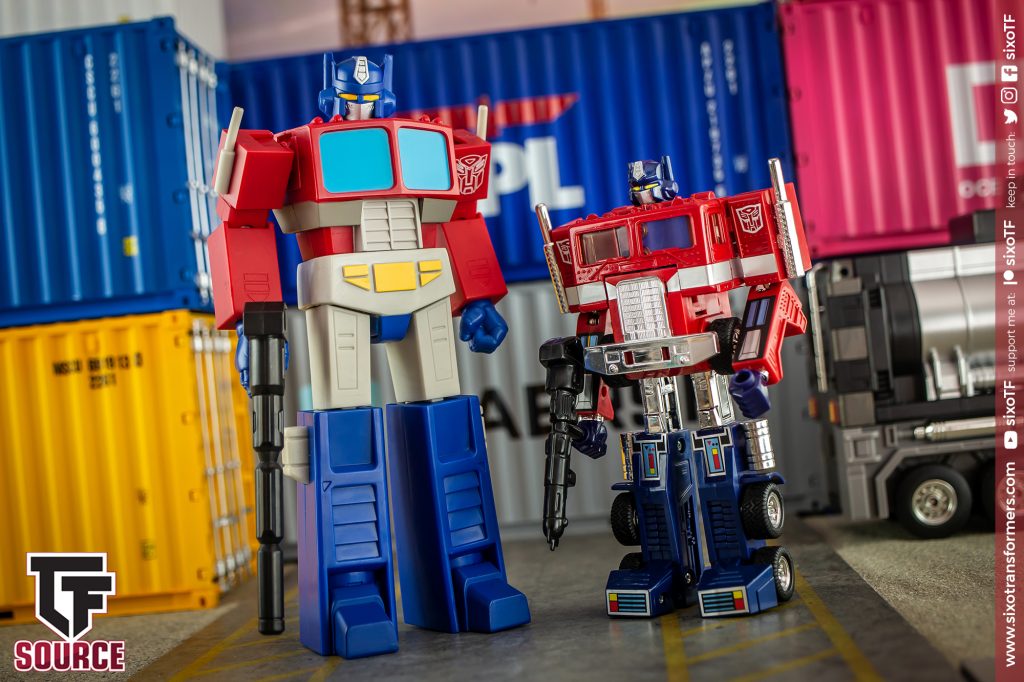 Ultimately it’s a strong attempt at calling back to the vintage figure and works amazingly well despite the colours obviously being so much brighter. Optimus’ original release is such an all-time epic that it’s terrific to see it given suitable attention here. 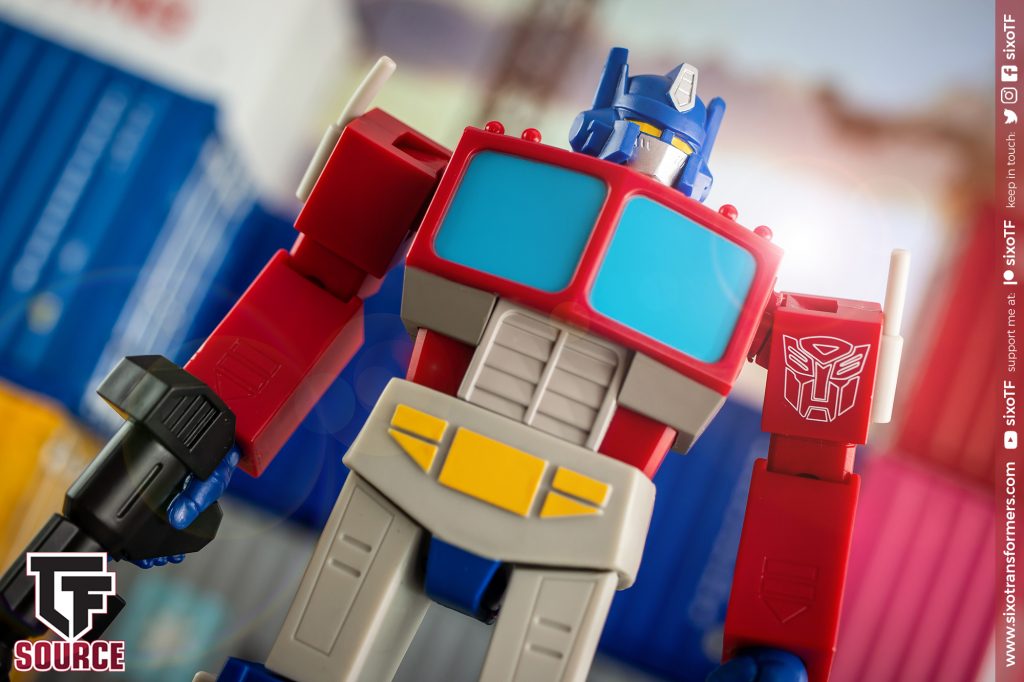 Beyond that, dare I say that I think I actually prefer this look? I like the cartoony head well enough, but I reckon this might be how my copy ends up staying at this rate. 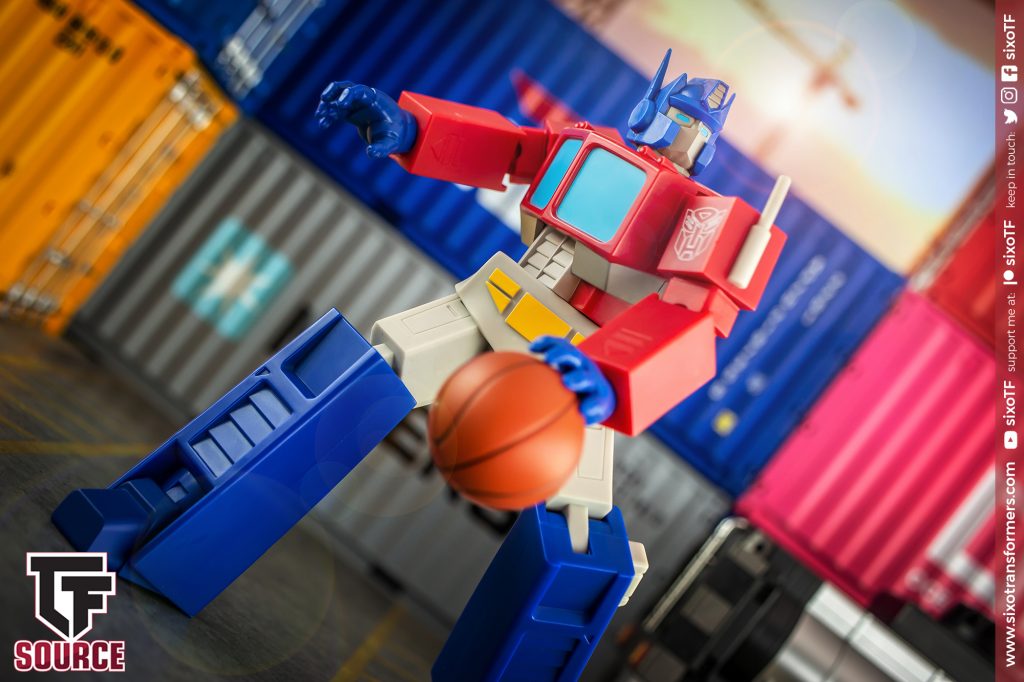 Oh, but there’s more, as Optimus also comes packaged with a basketball! This clearly refers to the episode called The Master Builders, in which the Autobot leader takes to an oversized court with his troops and learns the art of drooling– er, dribbling! 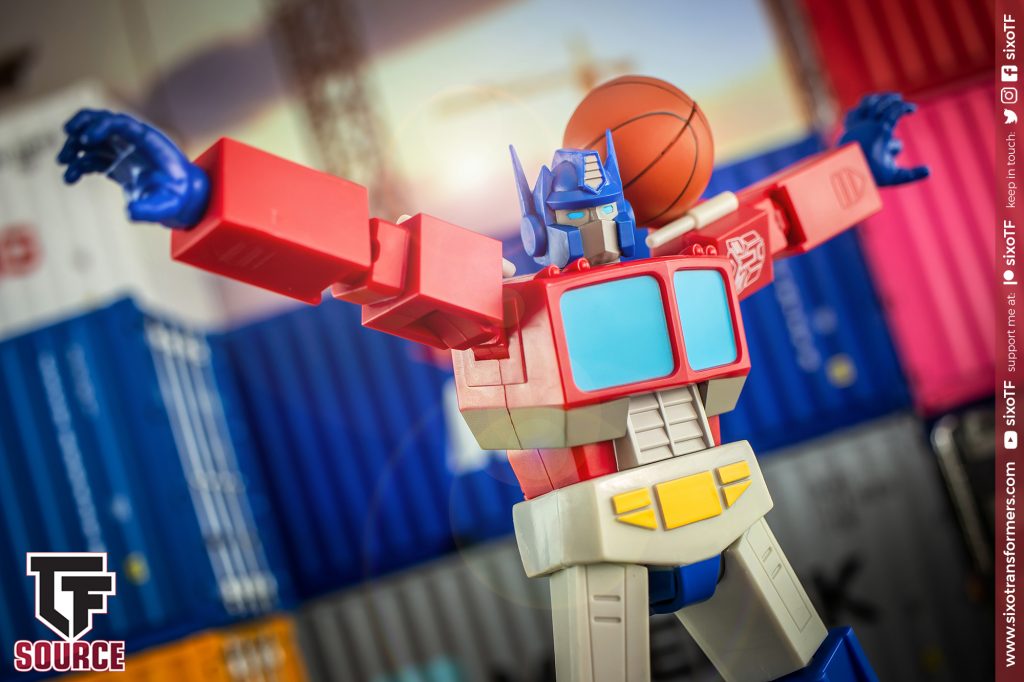 Here, the ball clips into a specific left hand with a noticeable plug in the palm, although that doesn’t stop you from using it in other creative ways! I think it looks fab, personally. 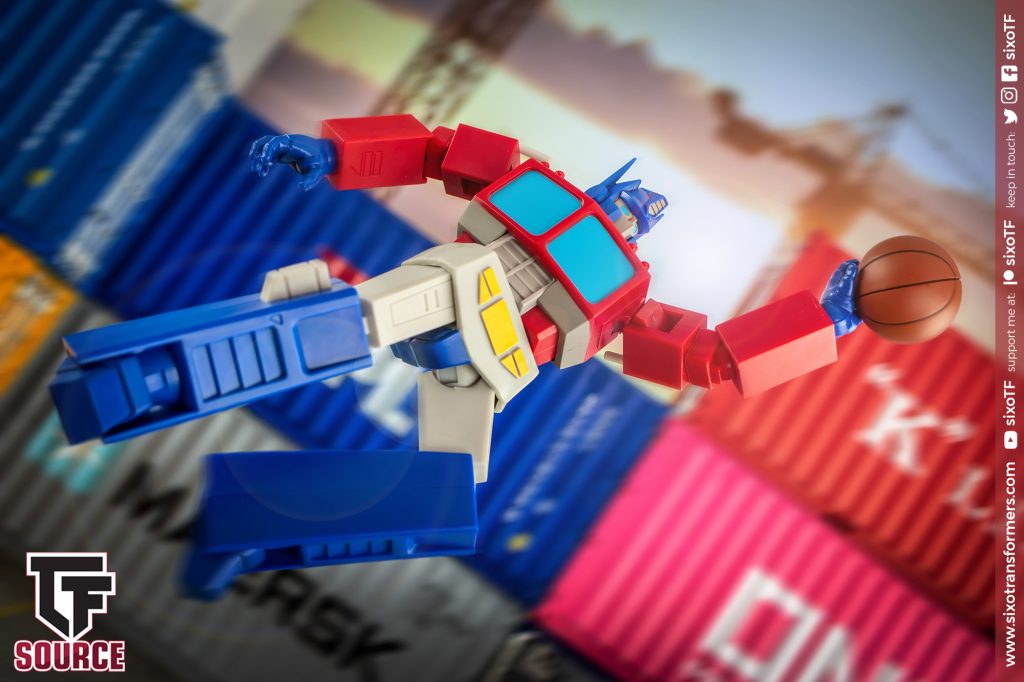 The articulation may indeed hamper the proceedings, but ultimately, there’s still tons of fun to be had with this figure due to these sorts of inclusions. The basketball was one of the features I was weirdly most excited about, and it hasn’t disappointed! I just wish more Optimus figures came with them. 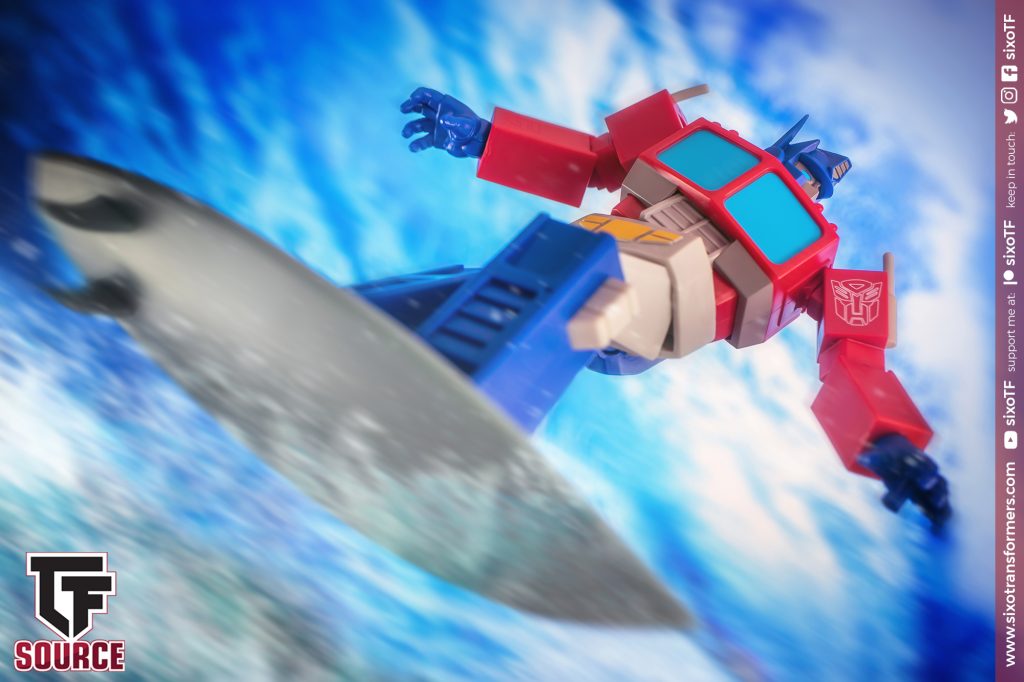 Last but not least, he also comes with a surfboard, and why not? This is a reference to The Ultimate Doom and honestly, it’s as much fun as it looks! You don’t see that on any Masterpiece Primes! 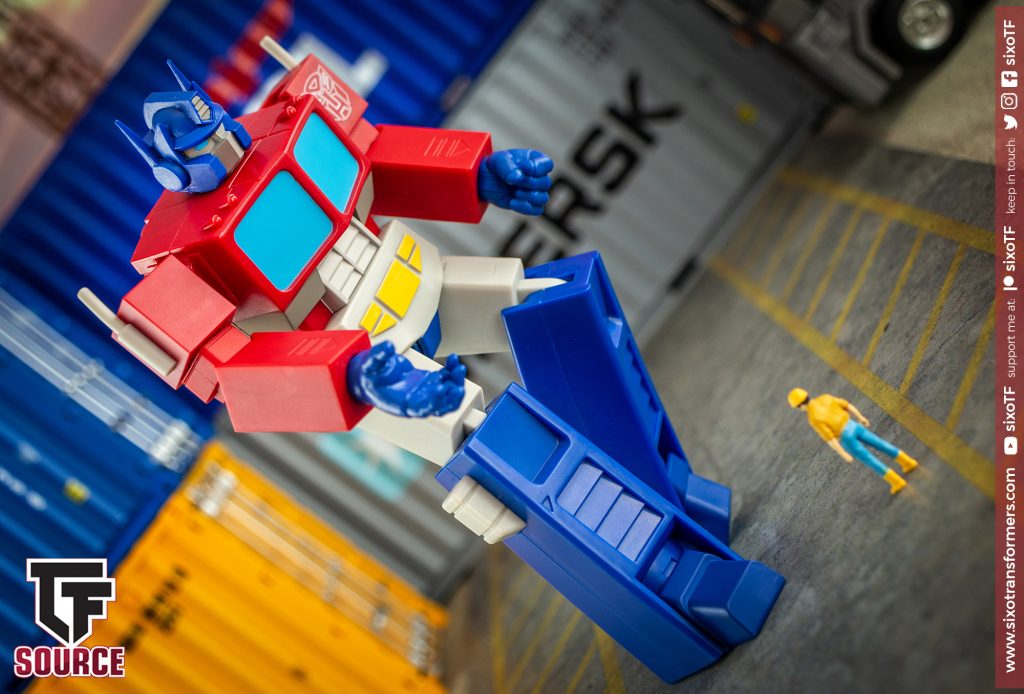 Overall, I think there’s enough going on in the package here to keep many fans interested, even if there are some nitpicks to be had, too. I know that the range of posing will be an area that many will grumble about but even taking that into account, there is enjoyment to find. 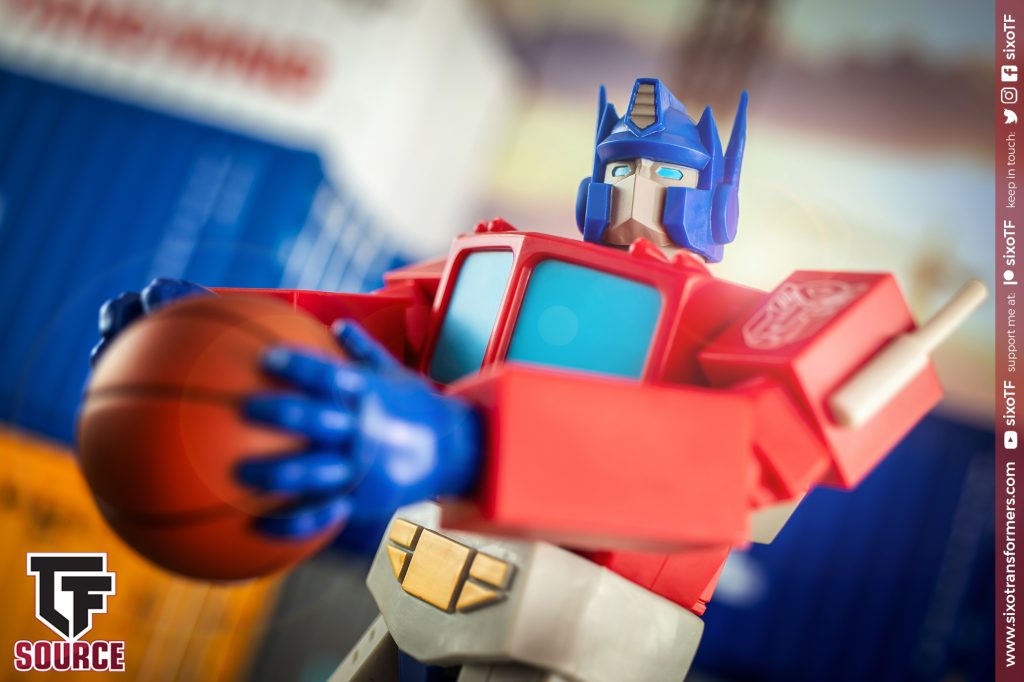 The core strength of this package is undoubtedly some of the accessories, but even putting those aside, it’s still a thrill to see a cartoon-styled Optimus done this nicely. Yes, I wish it was super-posable, but I still think Super7 has done a great job overall. 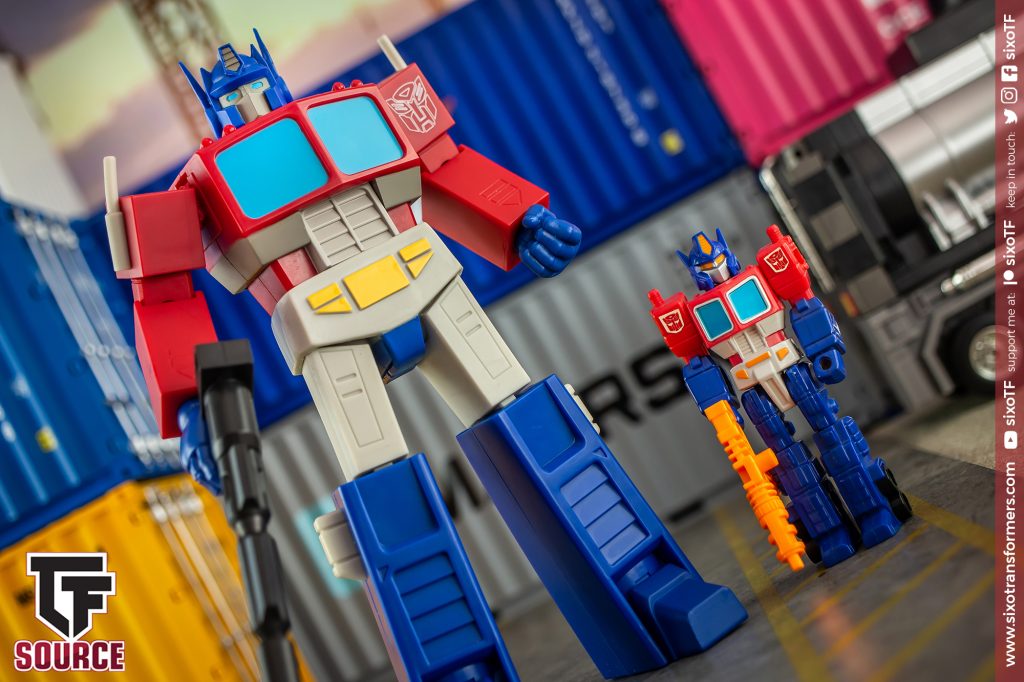 I’d also argue that considering everything in the box, the pricing on this guy is pretty decent too. I was likely in the crowd of thinking it was a little on the expensive side at first but having it in hand now, I get it. Purely in terms of fun and enjoyment, I feel like I’ve had my money’s worth. 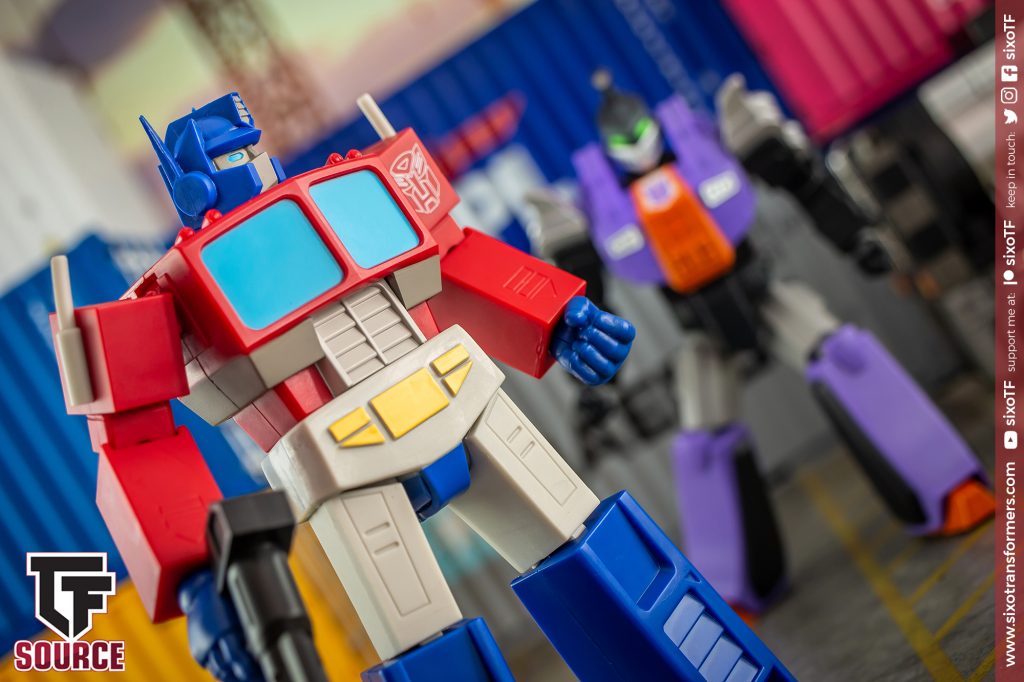 All of this leaves me excited to see what else Super7 has on the horizon. This may be a prime place to start, but it’s those Action Master homages I’m most excited about, personally. Next time, eh?

WHAT’S HOT? Overall a neat design with plenty of fun inclusions in the box. It’s a well-put-together product with a lot of nifty accessories.

WHAT’S NOT? The articulation is a downer, especially the limited elbows. Some might baulk a little at the price tag too.