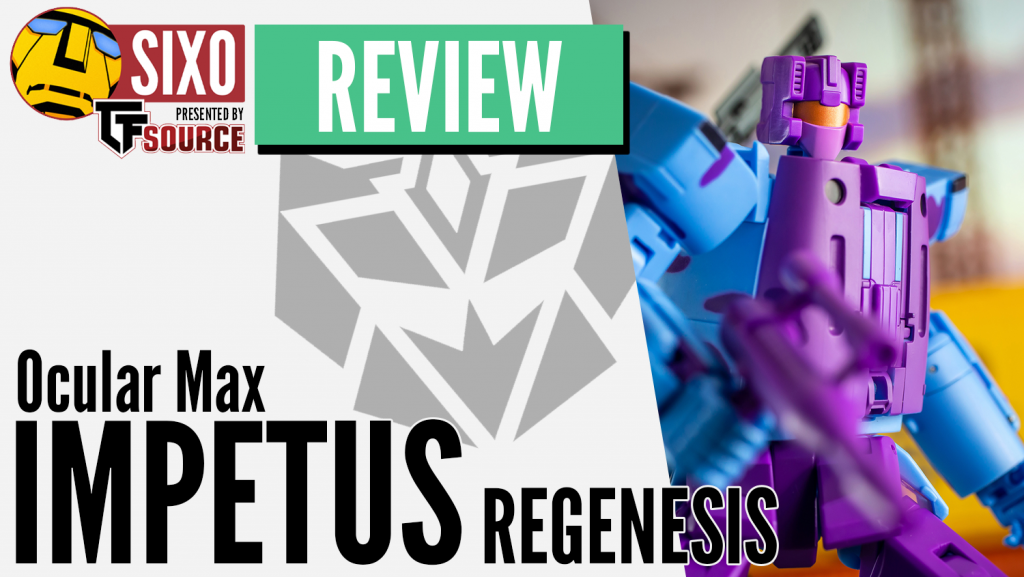 Looking back, I honestly feel like the Ocular Max Assaultus team has been one of my favourite third party line-ups to assemble in recent memory.

There have been various other standout examples from over the years, but this lot just dominated the proceedings last year. Despite the combined mode having a few quirks, the overall team was so strong that it was impossible not to be enamoured with each toy. 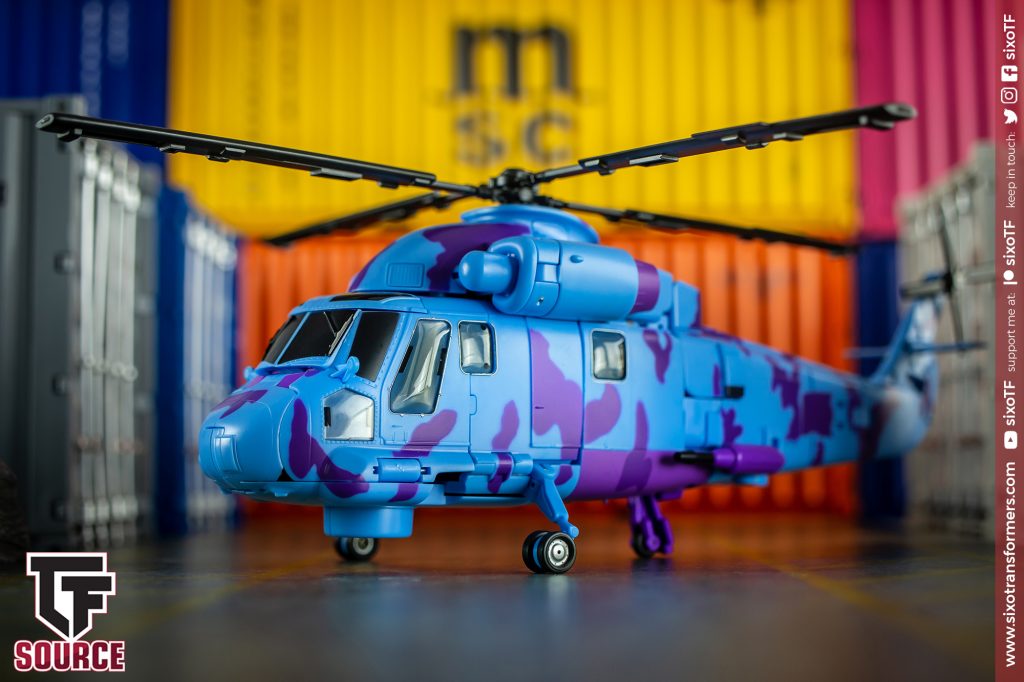 If nothing else, it was fantastic to see the individual Combaticons brought to life in proper Masterpiece-style, after previous 3P attempts were either more stylised or just not entirely on the money for my liking. Now that this same set is being repainted and re-released in Generation 2 colours? Well, consider me a happy camper. 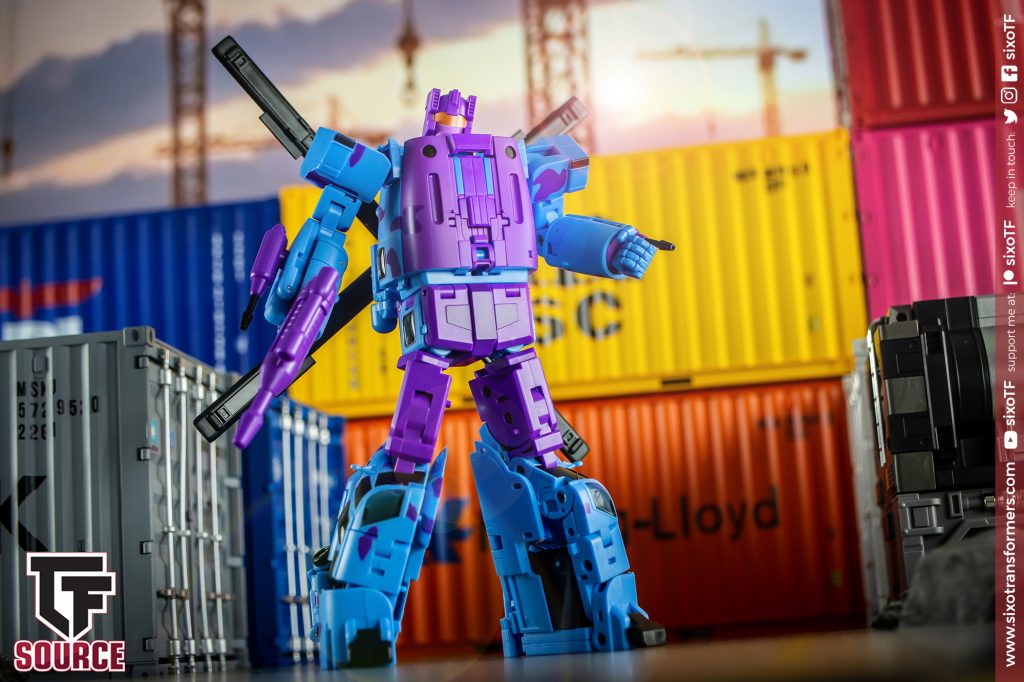 After all, who else has the gumption to whack out a camo-patterned baby blue military helicopter, eh? The very thought of it is so ridiculous that it can only have originated in the 1990s, an era that so much of Transformers seems to want to forget whenever it can. Yet here we are! 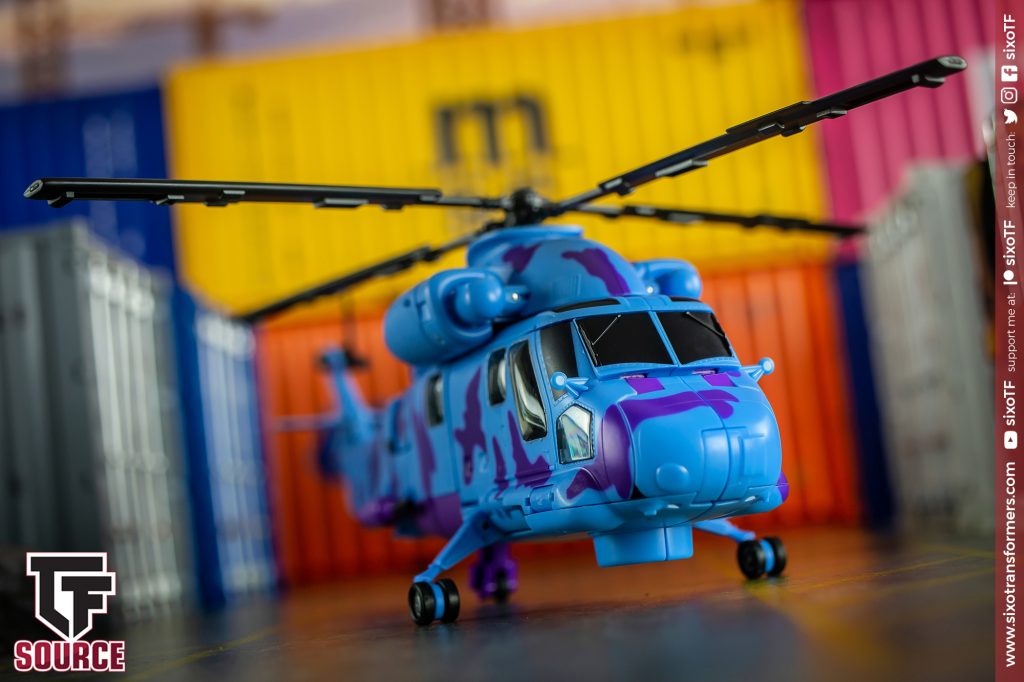 Now full disclosure, as much as I say I loved each of the crew, the original Impetus was certainly one with which I had a couple of quibbles. Nothing major, mind, especially as the overall figure is solid as anything. However, at least a few QC issues slightly let the side down, including windows that needed to be glued back in and a robot mode head that continues to pop off with even the slightest of prompts. 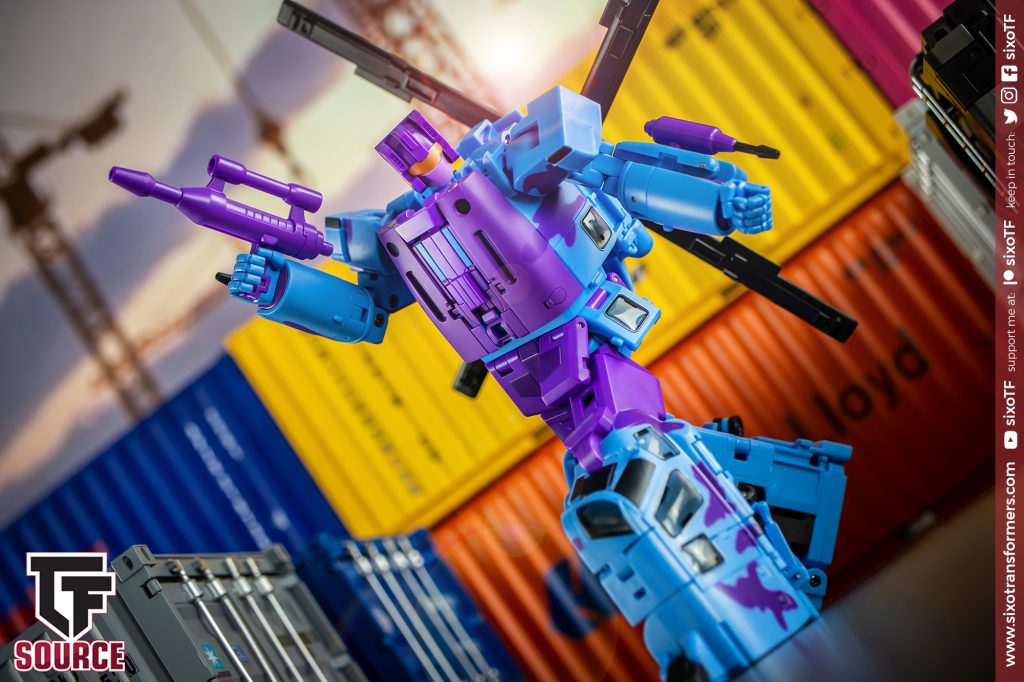 As for the design itself, there’s an argument that the robot mode is marginally let down by accommodating a whopping Big Man hand in its lower half. To their credit, Ocular Max does it as well as I can probably imagine it happening, but still, it leads to slightly strange proportions and rather fiddly legs. 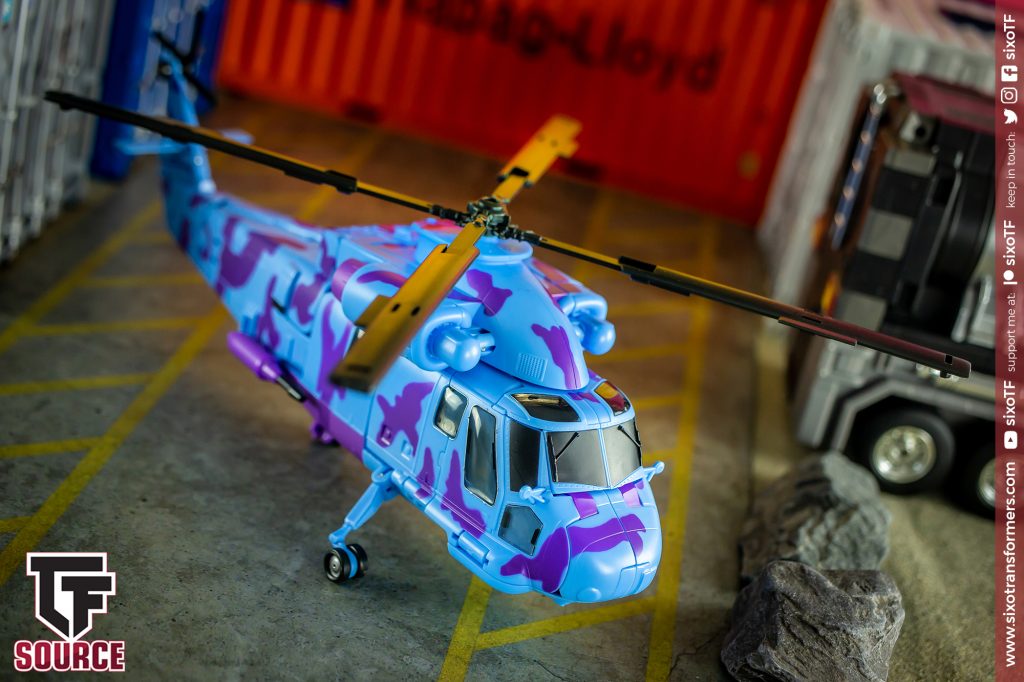 The good news for the ‘Regenesis’ version is that it improves dramatically on the slight quality snafus of the original, noticeably presenting with tighter joints and an overall more polished finish than its forbear. I’d also state that it’s more visually attractive, as that vibrant new colour scheme is a real showstopper in hand! 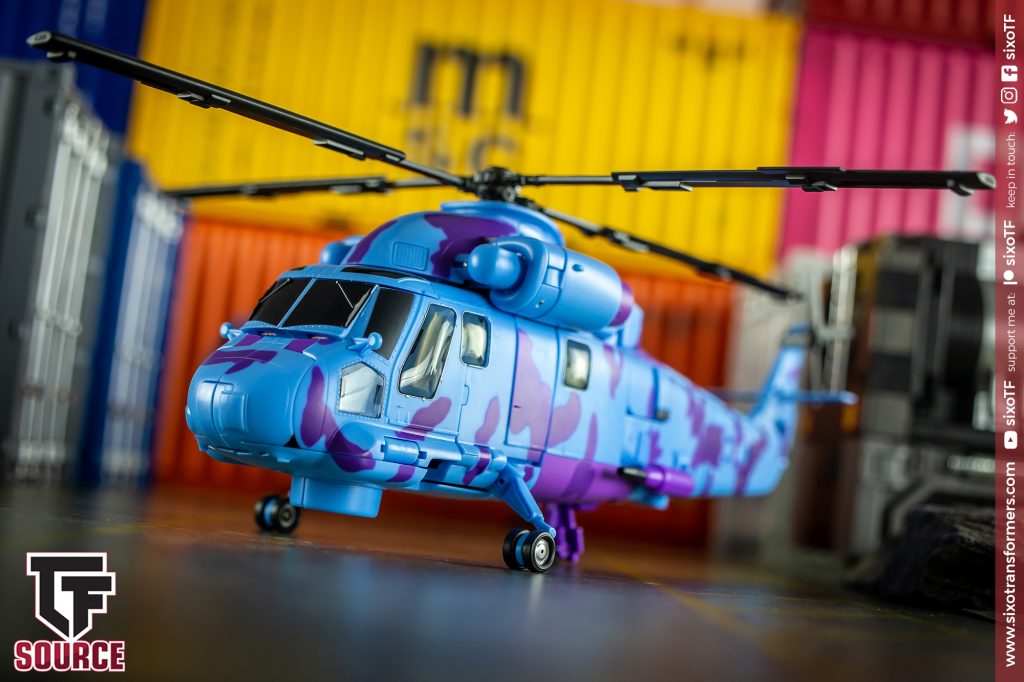 Seriously, as much as it was cartoon accurate, there’s only so excited one can get about a flat grey finish on an alternate mode like this (especially in a world where it’s competing with hot pink copters like Spinister and the like!). The blue and purple may not be to everyone’s tastes, but c’mon, you have to admit it’s eye-catching, no? 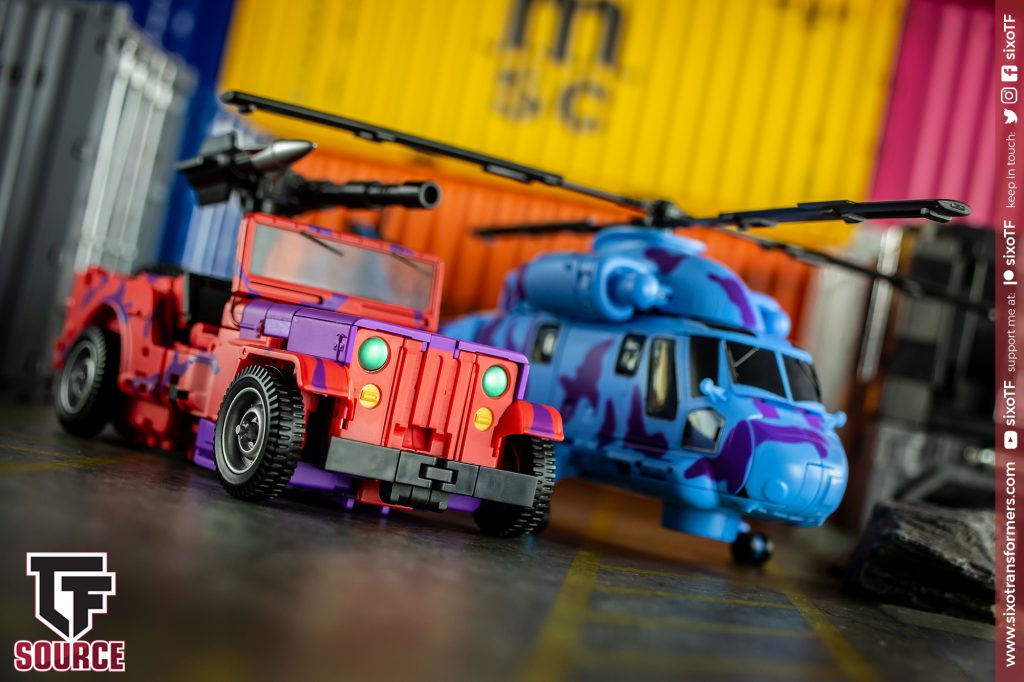 It’s also superbly finished, with crisp detailing all over, putting it well in line with what we recently observed from Fraudo Regenesis. With the team shaping up this well, it makes me very excited for the likes of Probus and Incursus! 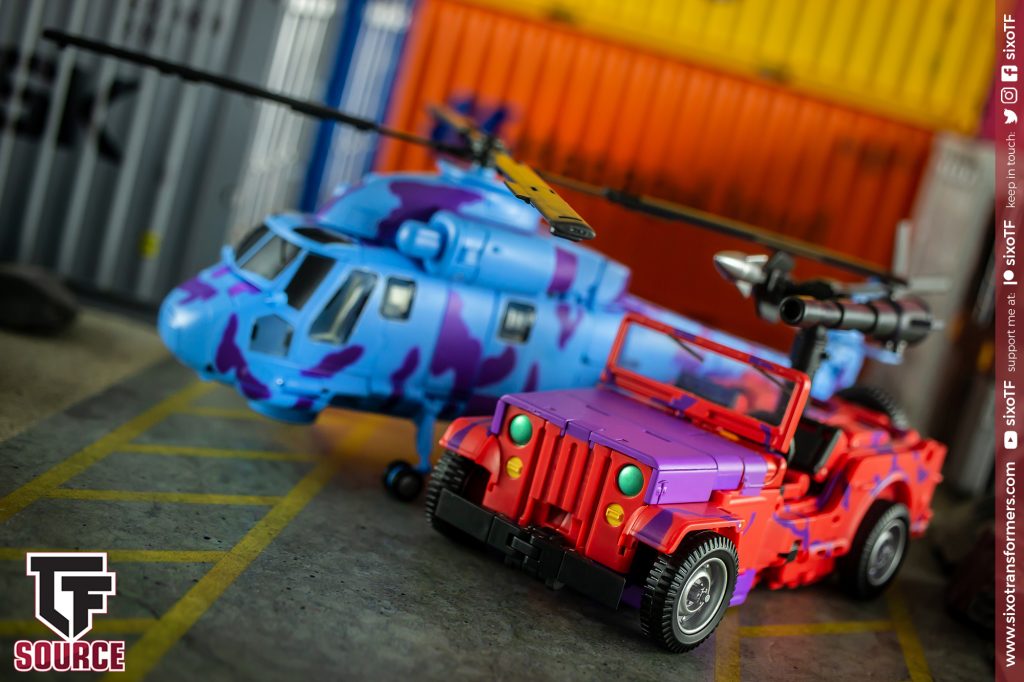 True, they may not scale worth a damn in this configuration, but if that kind of thing bothers you, then I feel like you missed the warning sign at the Transformers gate some miles back! The Combaticons have always been the go-to example of things that are the wrong size in the ‘robots in disguise’ franchise, and Ocular Max has simply maintained that trend. 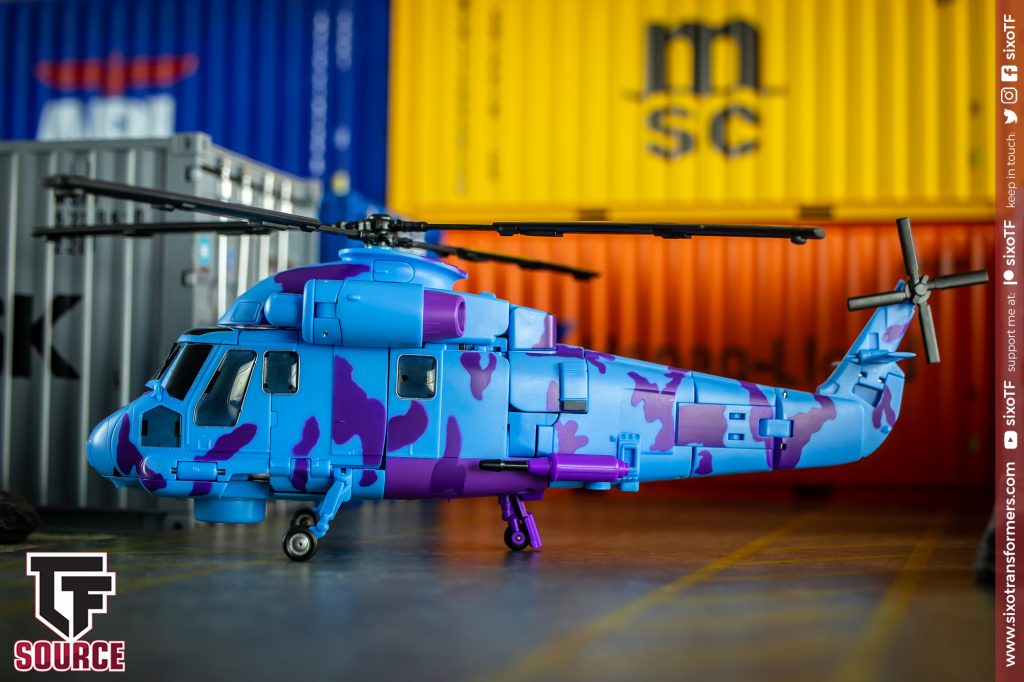 Anyway, blue camo’ pattern aside, this is a remarkably real-world accurate (at least by my estimation) depiction of the helicopter mode, complete with all kinds of stunning detail and some decent proportions. There are three flip-out wheels which help it to stand stably as you admire it. 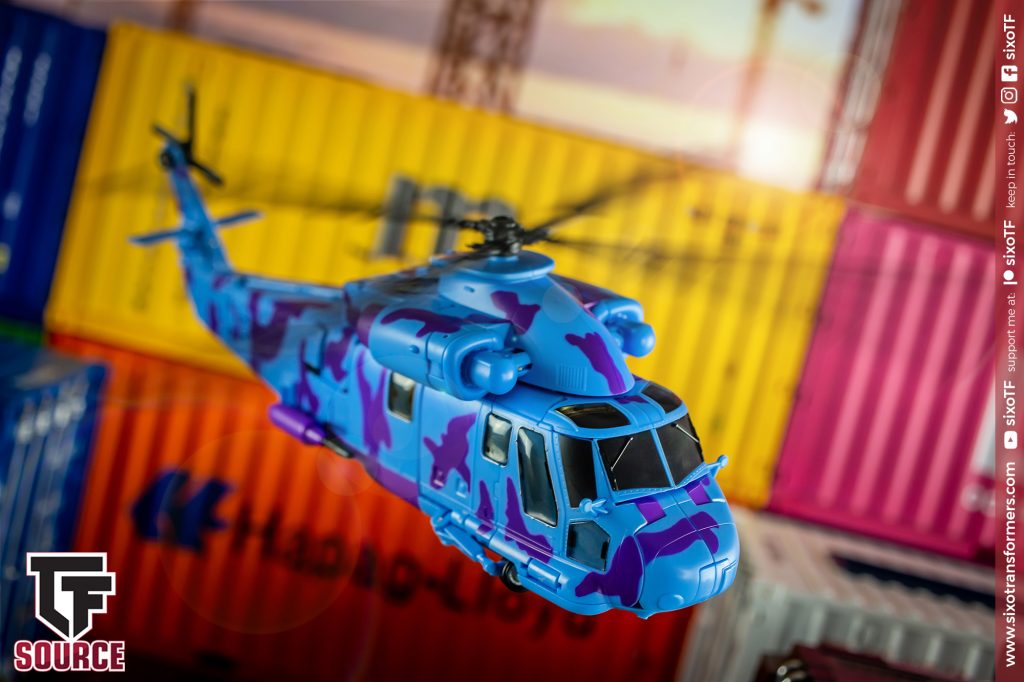 Should you prefer, then naturally, you can give the rotors a good swish, although as on the original, I found that they don’t rotate freely for very long (which is always something I enjoy!). The tail rotor is sadly too impeded to really move because of how it clips together out of two halves. It will turn slightly, but unless you’re pushing it, it’ll stand statically in place. 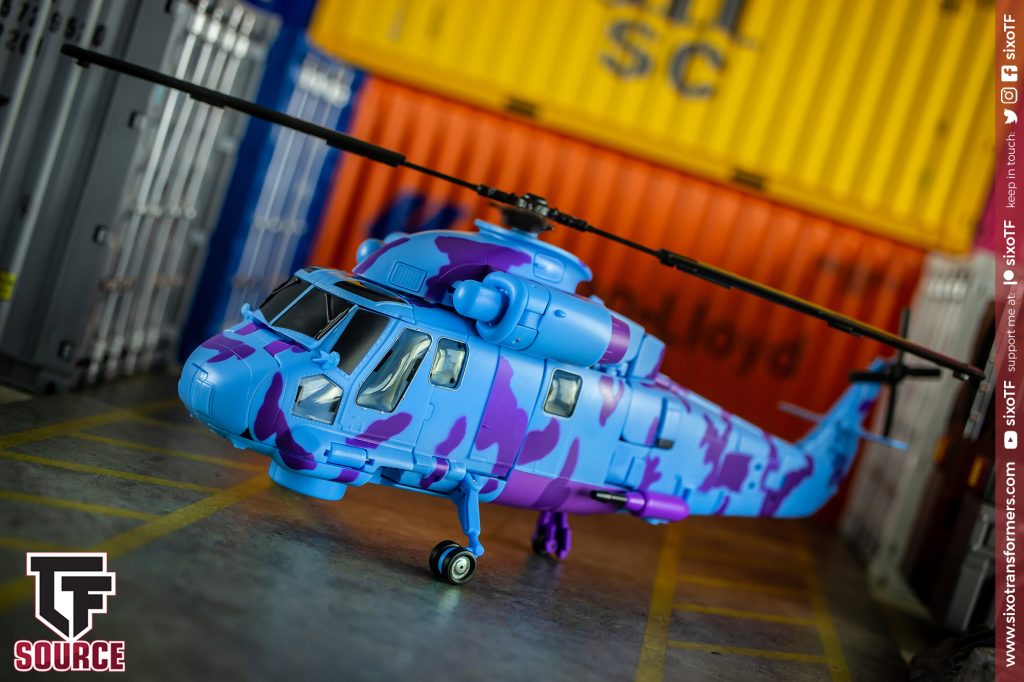 You can also arm this chopper with various weapons, including the two side guns that clip easily into place (and sit more snugly than on the original figure). It’s possible to add Impetus’ hand blaster on the front of the vehicle mode, although frankly, doing so is such a faff that I simply have no appetite to even give it a go! 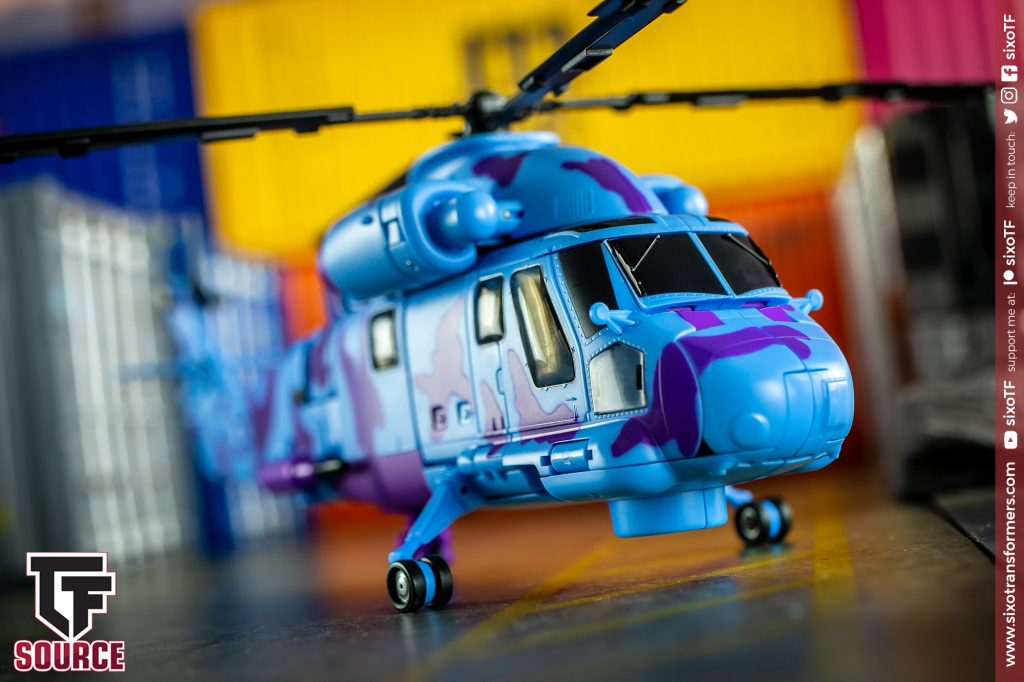 No matter, as overall, this is top-tier vehicle mode stuff, with some exceptional detailing and a gorgeous finish. The paint job adding that extra layer of zing is all the more welcome in the case of this Regenesis release! 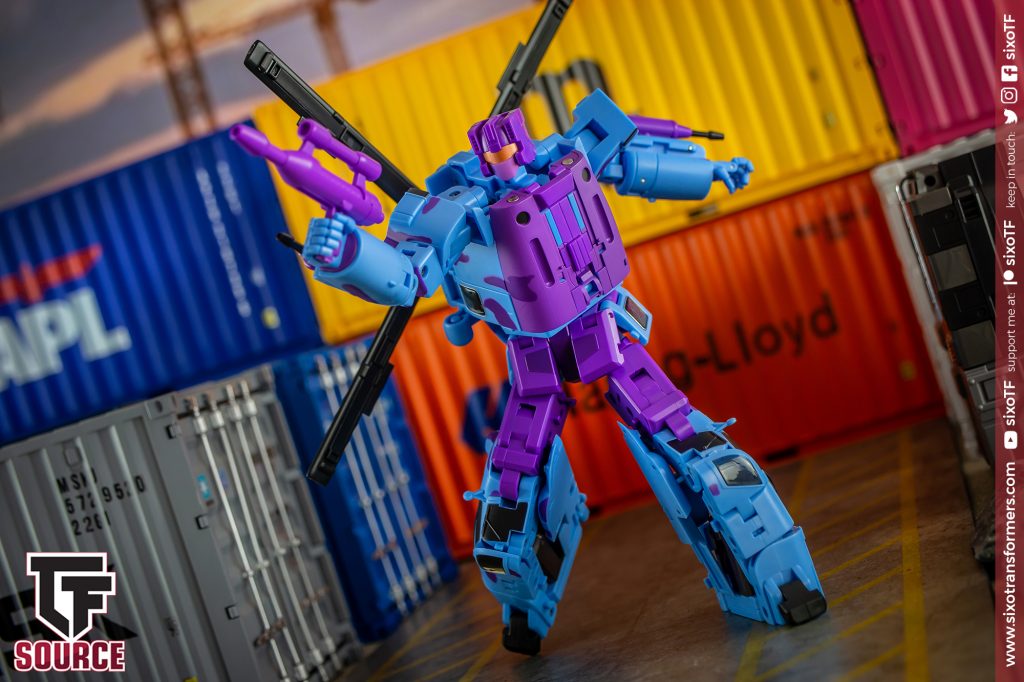 As far as transformation to robot mode goes, it’s amongst the most fiddly effort in the Ocular Max team, although still, it’s all reasonably straightforward once you know what you’re doing. The most intricate bit is the vehicle mode’s rear tail, which folds into smaller panels and collapses inside the back of the main robot body. It’s a very clever solution that is slightly cumbersome for how little clearance there is, but once you’ve got it sussed, you should be ok. 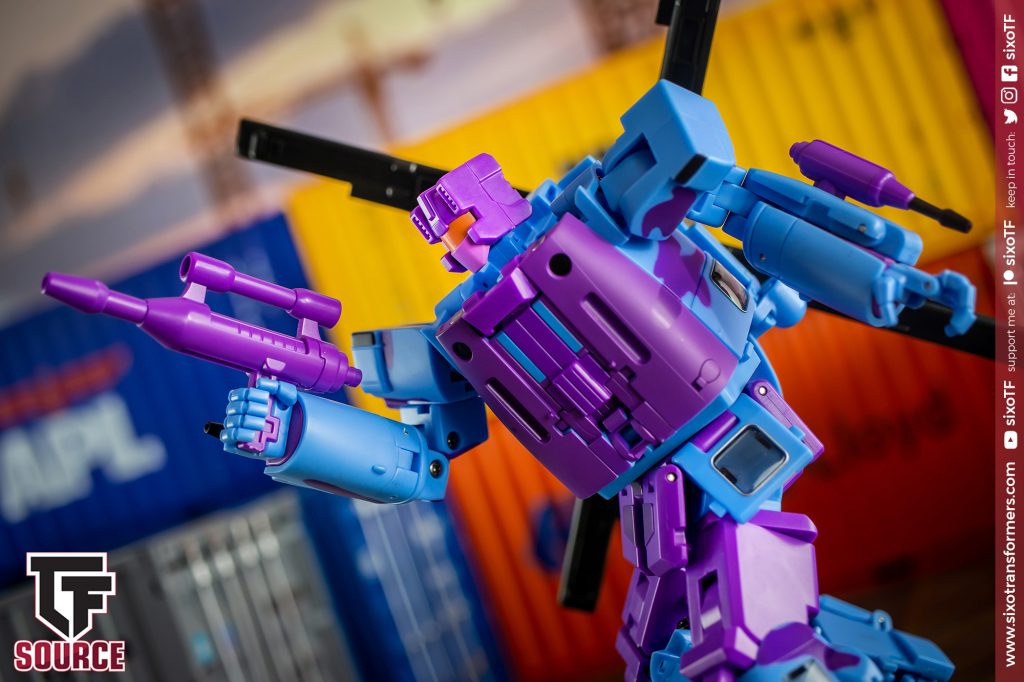 Besides, the result looks fabulous and remarkably tidy for the most part. Helicopter designs often want to leave all kinds of kibble behind, and this is no exception, but at least you could argue that it’s all meant to be there, in this case! 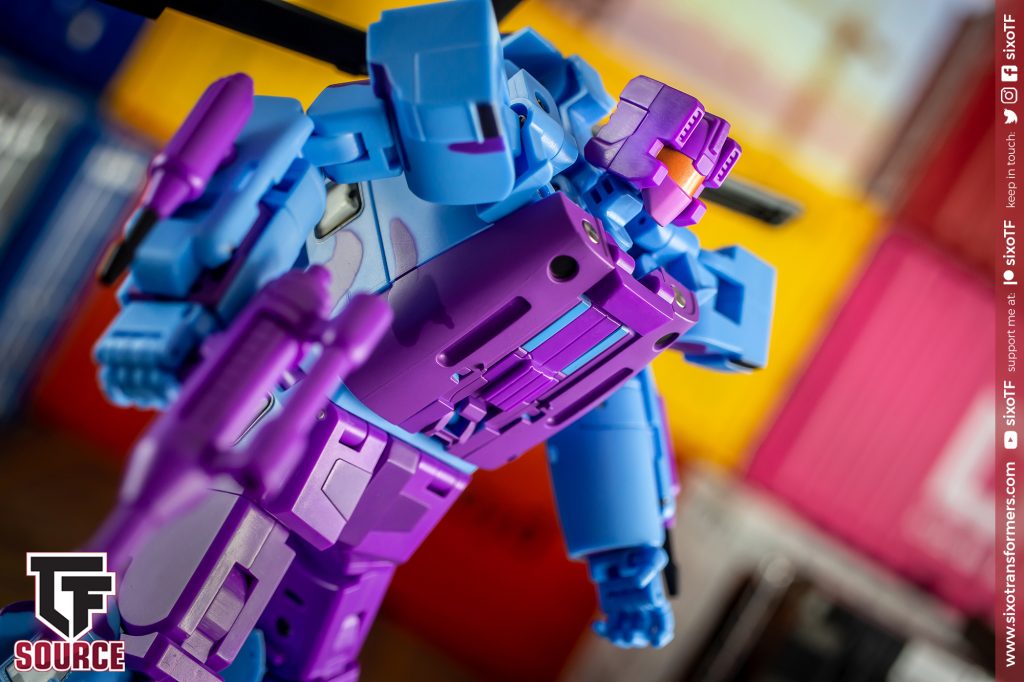 Yes, as before, this is a stunning recreation of Vortex’s on-screen likeness, bringing the character to life with a level of accuracy previously unseen in the 3PMP arena. The sculpt also follows the more recent Masterpiece trend of smooth lines and minimal moulded detailing, allowing it to hit all the right anime notes. 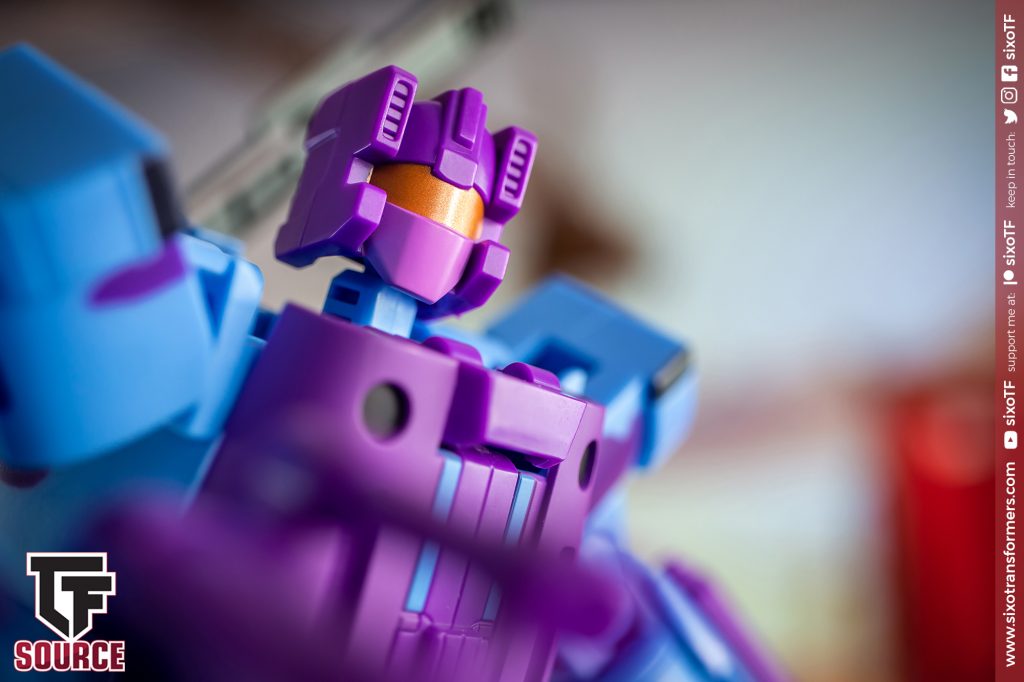 That carries through to the head sculpt, which, my word, is utter perfection. I’ve mentioned before what a great job Ocular Max often does with their faces, and on this team in particular, but I don’t see how this could be easily bettered. It was already striking, but that new colour job is just out of this world! 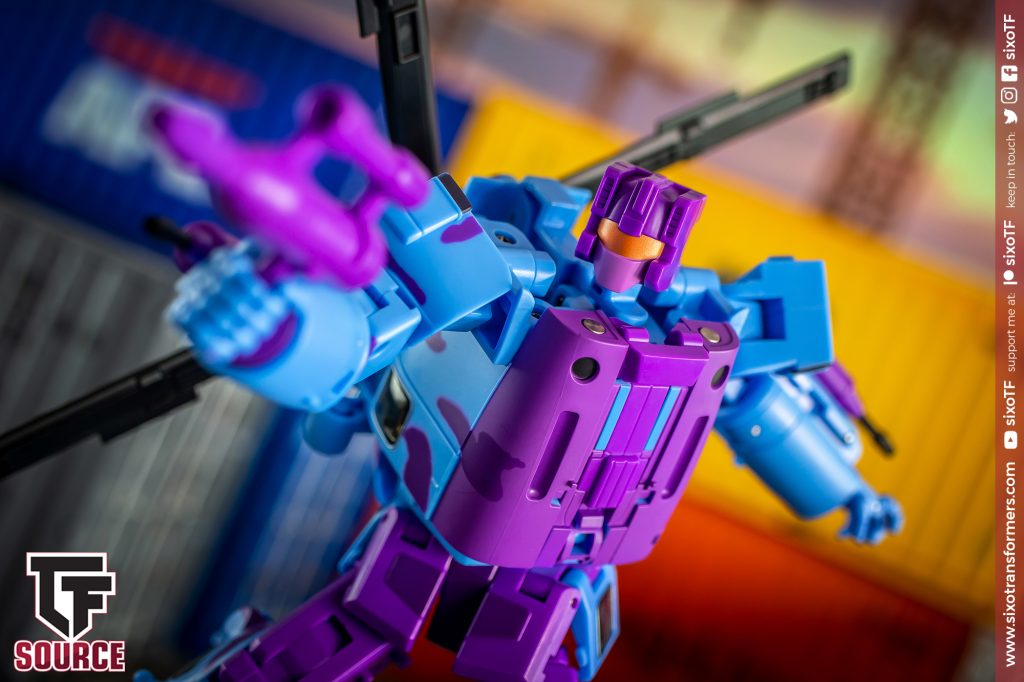 Of course, the same can be said in general here, with the robot mode hugely benefitting from the new look, in my opinion. I mentioned some of the oddities of this design earlier, but somehow the new take seems to wear most of it quite well and looks exceptional as a consequence. 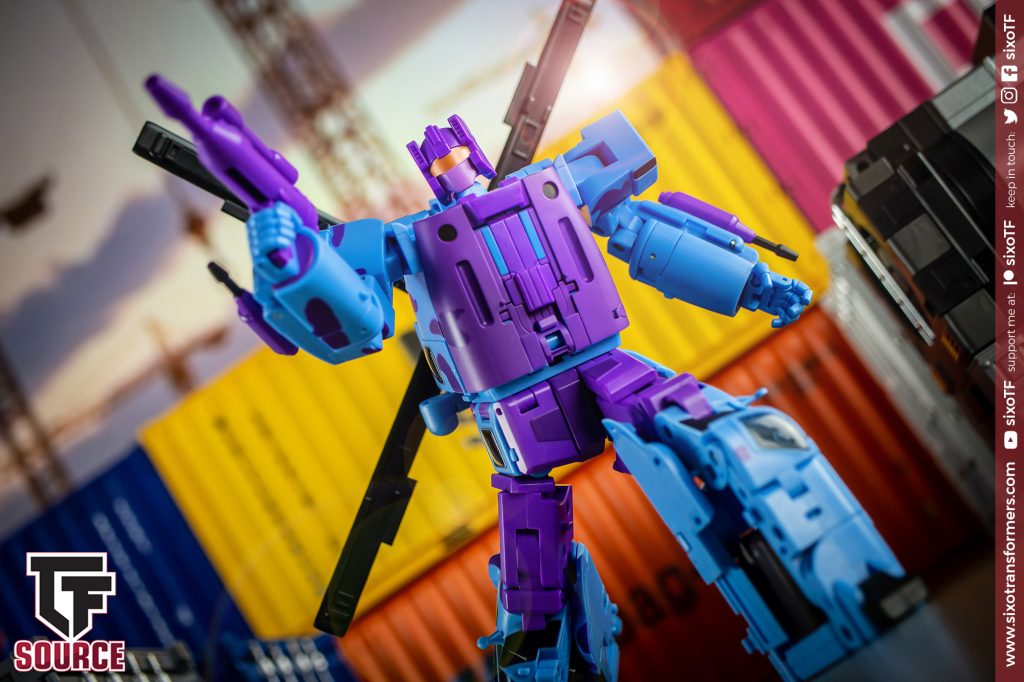 Perhaps my only slight grumble remains the all-too-obvious combined mode hands inside the legs. These weren’t particularly well hidden on the original, but given they were light grey inside a dark grey body, they managed to blend in better. Here, it’s black hands stuffed inside bright blue legs, so you will spot them a little more! 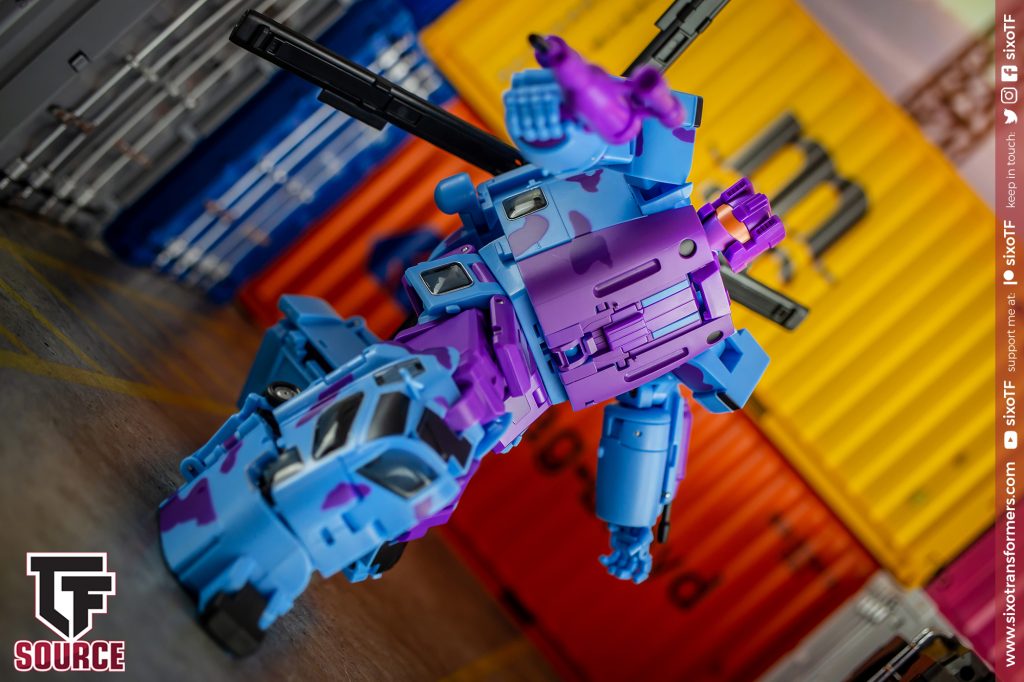 And as I say, including the big hands does mean that the legs are a little funky in places and perhaps not quite as naturally articulated as I might prefer. No matter, though, as Impetus can still pull off plenty of fantastic poses and is great fun to mess around with overall. 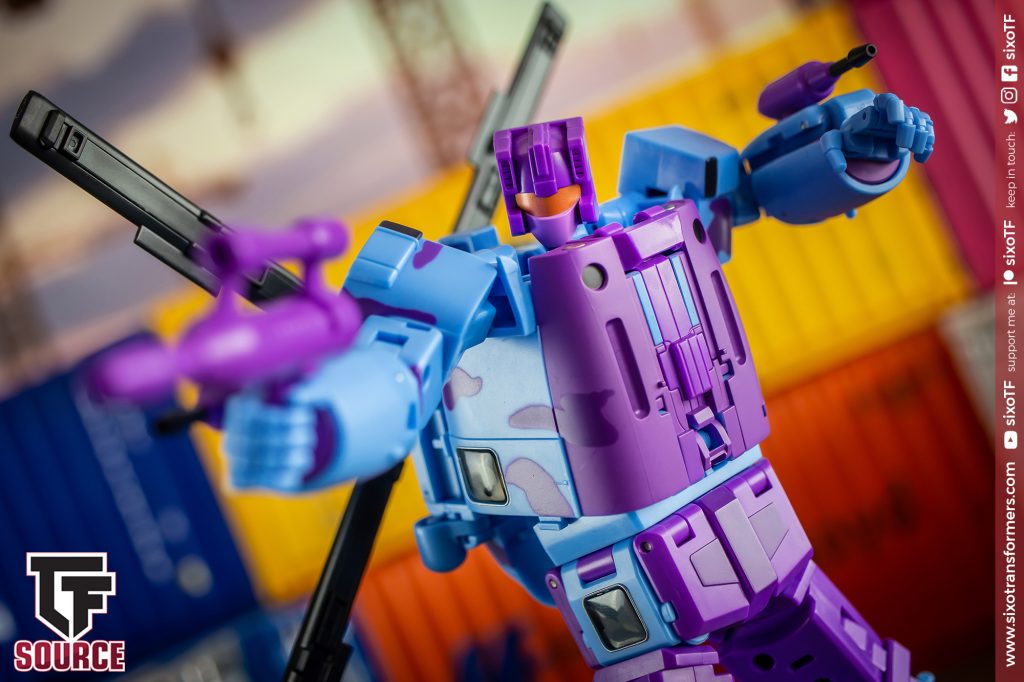 As before, you can arm him up nicely, too, with twin guns on the forearms and the hand blaster pegged securely in his palm. It means he rarely fails to look great on display despite the odd legs. 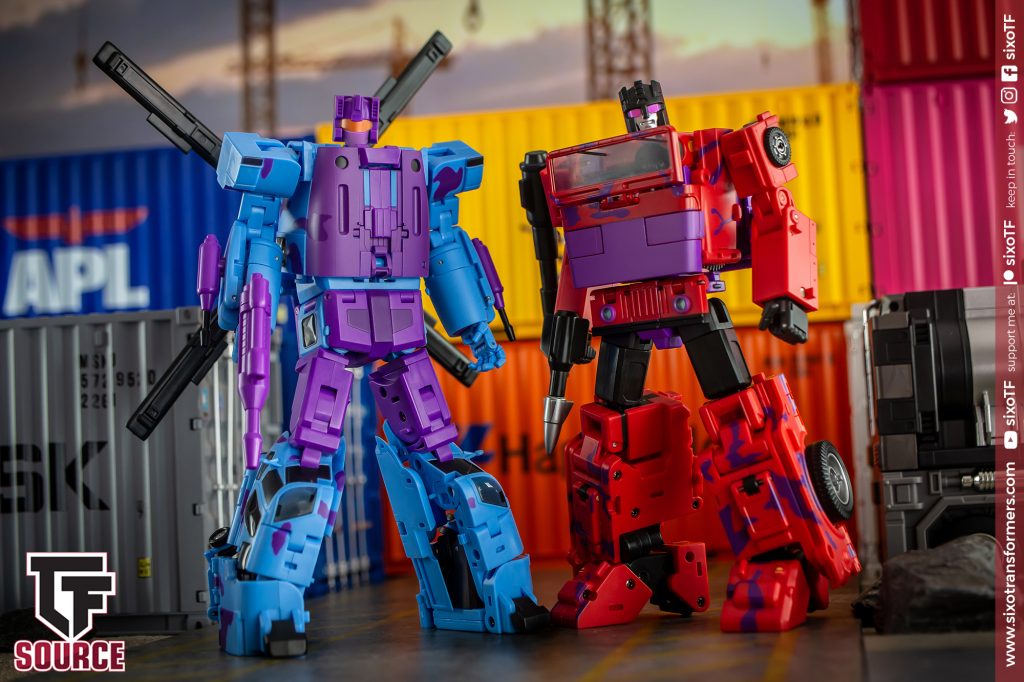 Overall, we’re two for two on the Regenesis Combaticons, with this team shaping up well so far. Despite it only being last year that I got my hands on the originals, I’ve hugely enjoyed these G2-themed re-releases so far. 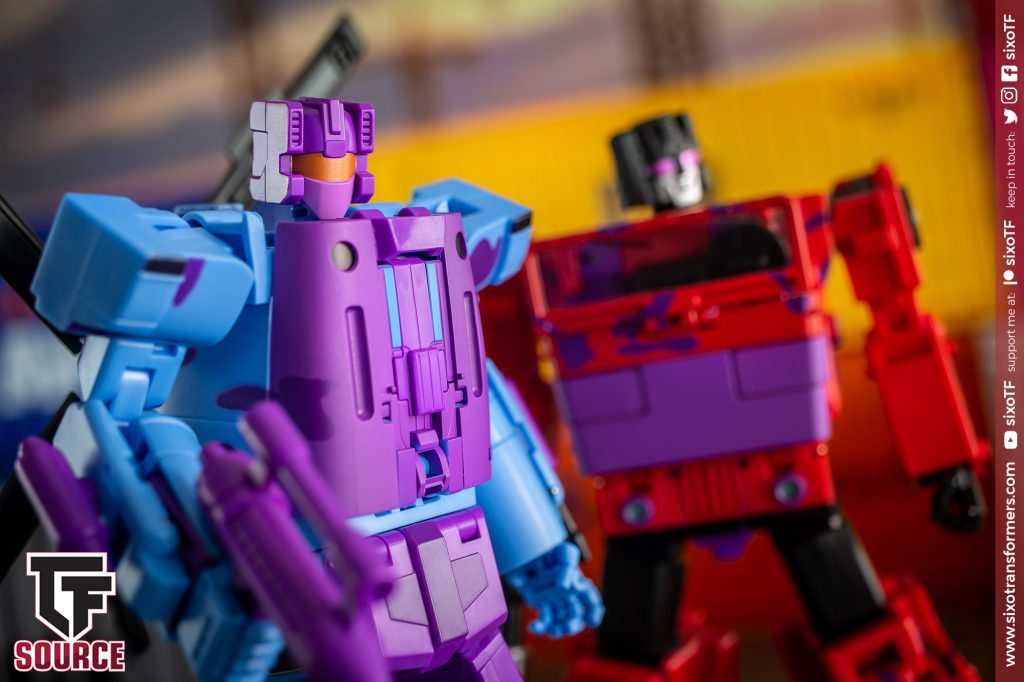 If anything, Impetus is even more striking than the already gaudy Fraudo, if only because this new take is supremely different from the original! Still, their colours work exceptionally well together. 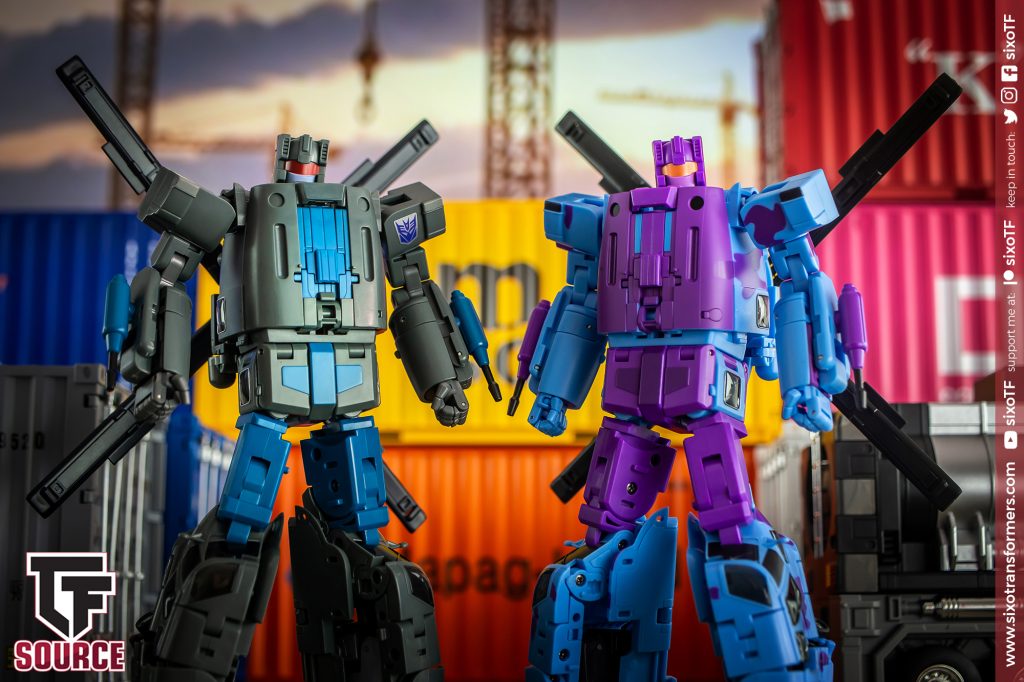 As I’ve said, the first version of Impetus is a great toy, and I like the ‘warm’ grey Ocular Max went with for the main body. However, seeing it souped up in eye-popping camo’ blue? No contest, in my opinion. 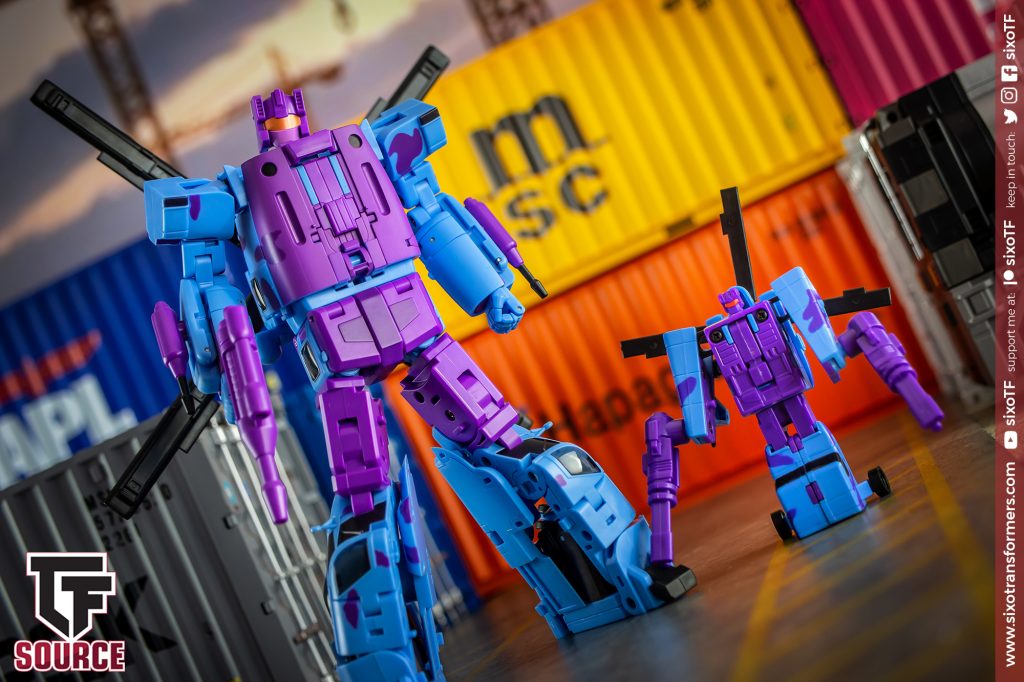 In fact, it’s remarkable to me just how well they’ve captured the tones of the original Generation 2 toy. I mentioned the same with Fraudo, but all too often, 3P attempts at this sort of thing can look a little muted by comparison, so I’m thrilled to see Ocular Max dialling up the saturation for this effort. 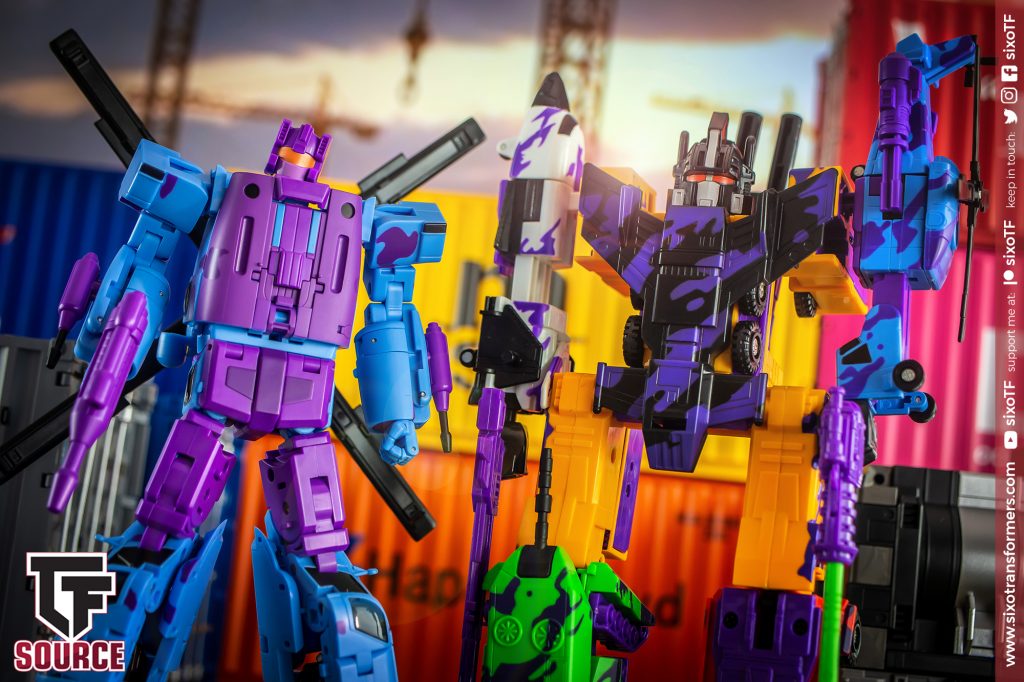 It bodes well for the rest of the team, especially as we have some of the most vibrant examples still to come! I simply cannot wait to see that full 1990s-inspired combined mode. 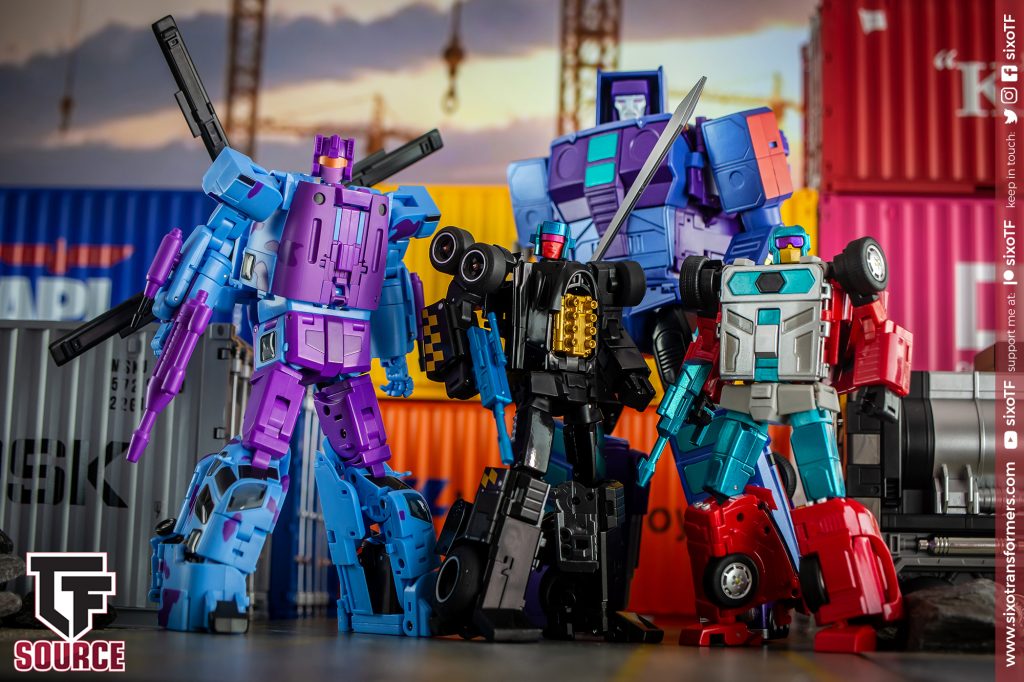 For now, Impetus looks fantastic next to other G2 3PMP efforts, not least of which is the X-Transbots Stunticons. Amazing to think that I’ll soon have both teams covered (and the Constructicons too)! 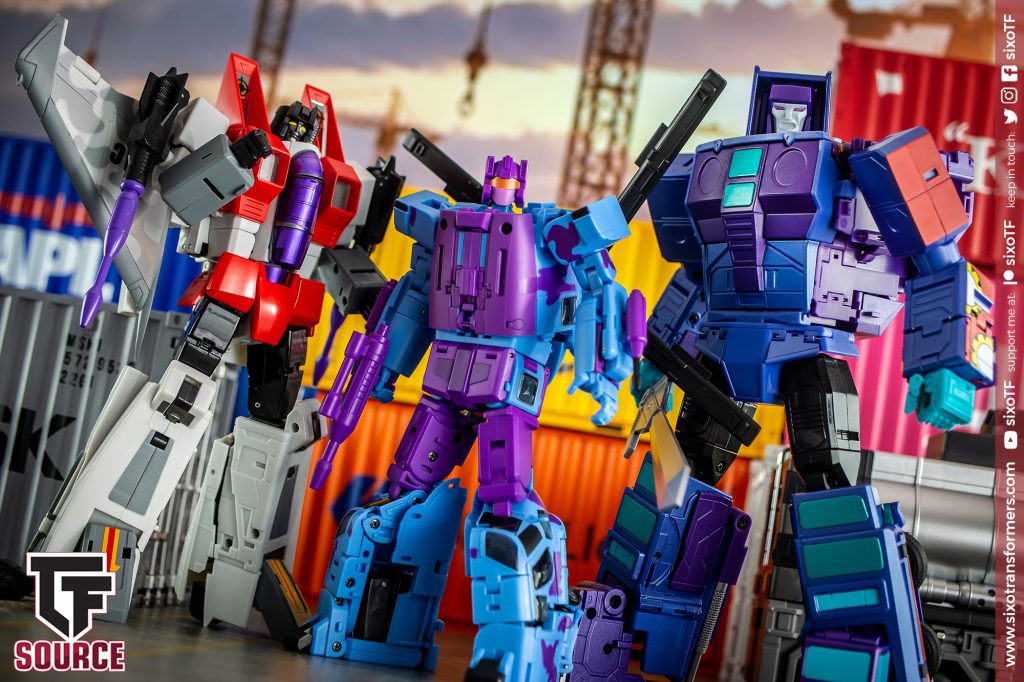 Even beyond that, I can’t believe how much of this stuff is out there now! Perhaps I was wrong to say that this was an era people wanted to forget about after all… 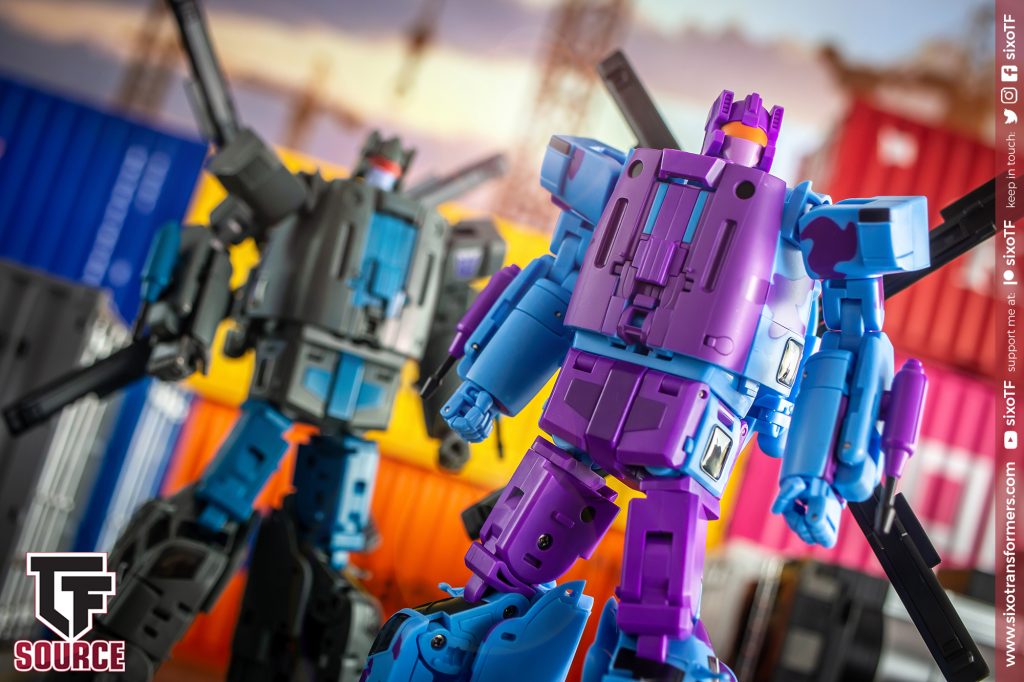 Anyway, for today it’s a solid outing for Impetus 2.0, which manages to up the quality on offer from the original and does it in style too!

WHAT’S HOT? It’s a great design to begin with, but my copy is noticeably better put together than the original release. Oh, and the colours!

WHAT’S NOT? The legs are still a bit funky in places, mostly because of the combined mode hand being integrated.