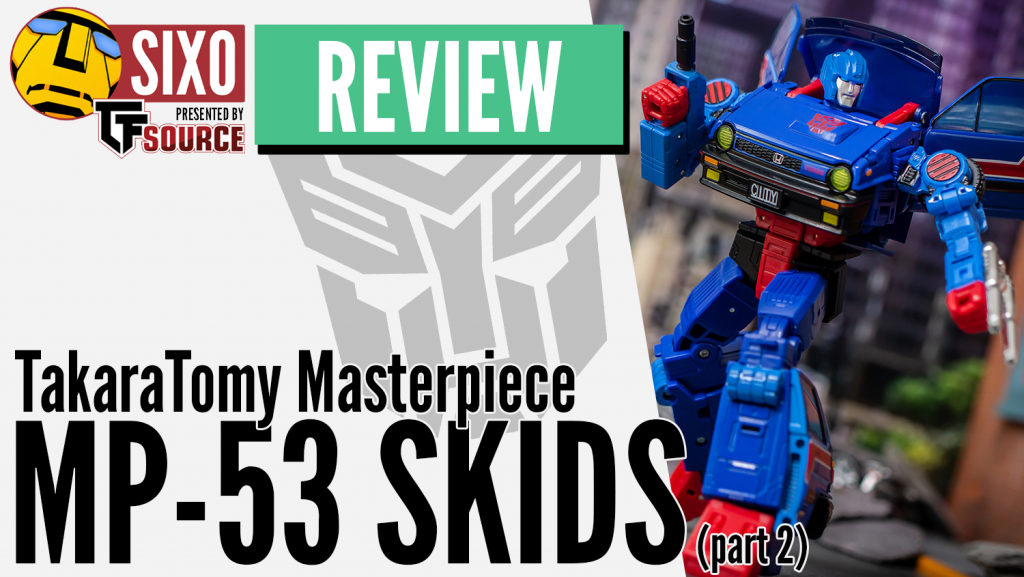 We’re back for the second part of our extended look at one of the more-recent Masterpiece releases with MP-53 Skids! Last time, we covered what makes this particular release so unique and took a gander at that rather spectacular vehicular form, too. 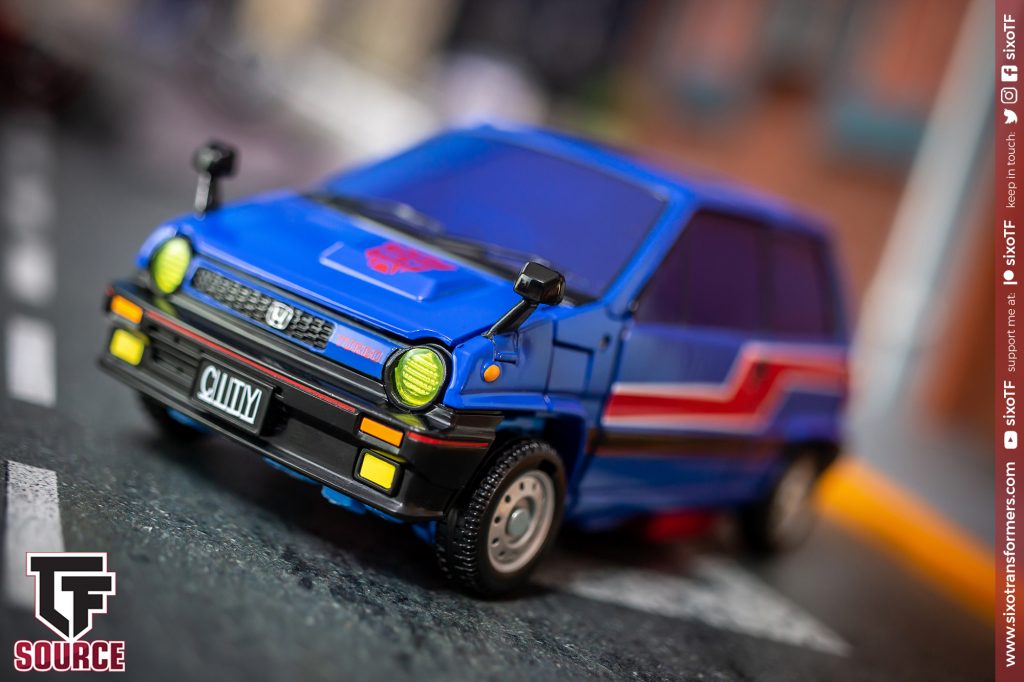 Now it’s time to get the toy contorted into robot mode, which is usually when some collectors start fearing the worst regarding Masterpiece-level transformations! With experiences of complicated conversions on toys such as MP-52 Starscream not too far from memory, perhaps that’s understandable. 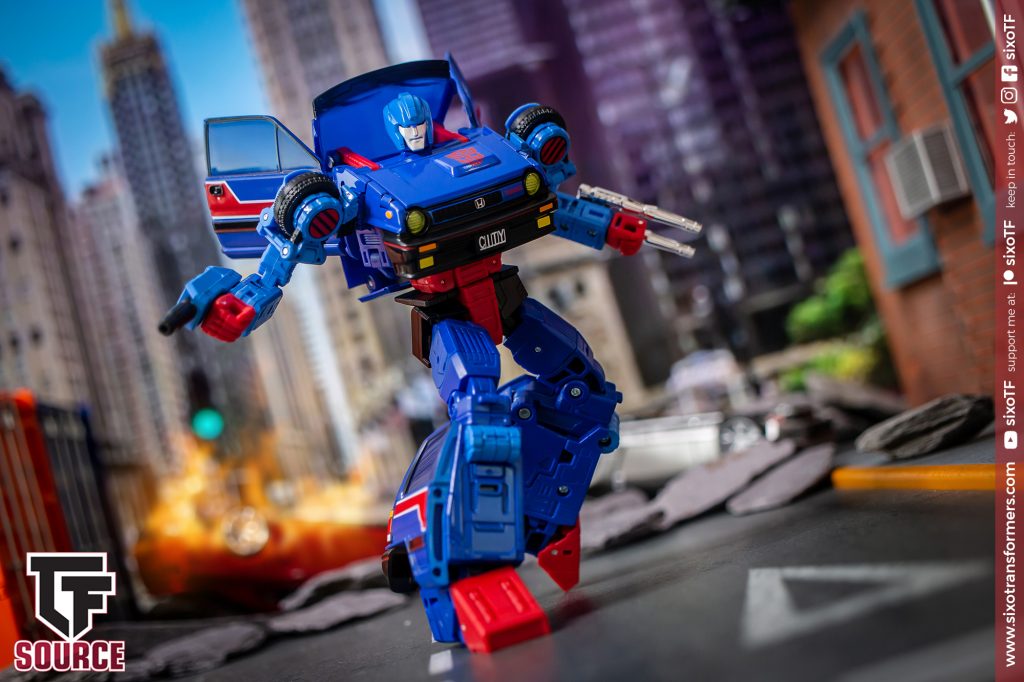 Except here’s the thing – Skids is about as simple as they come and arguably possesses the most straightforward transformation we’ve seen in the ‘post-Hasui’ era of Masterpiece. In truth, I love the intricate puzzles of the new Seekers and the like, but there’s little doubt this release has represented the most considerable helping of ‘pick up and play’ value I’ve personally encountered on one of these toys of late. 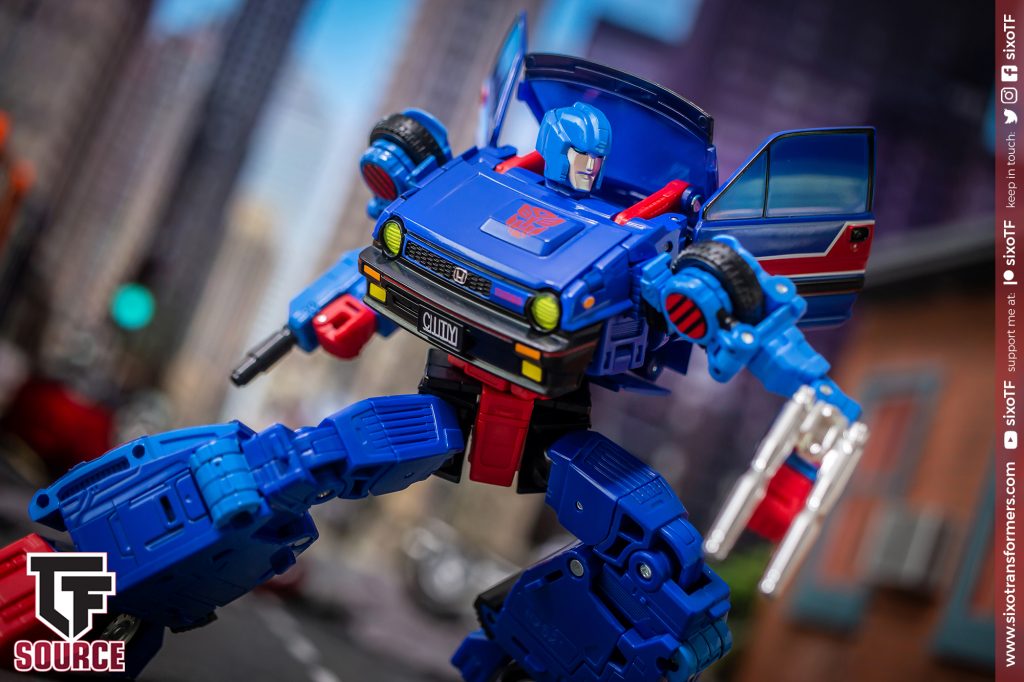 And look, it’s not like it strips out all the clever stuff, either. MP-52 may boast a level of engineering prowess that is honestly hard to fully comprehend even whilst you’re undertaking the process, but that’s not to say its follow-up is a slouch when it comes to knocking your socks off. In fact, this conversion’s more undemanding, almost elementary nature is itself a marvel of manoeuvrability, given how graceful it is at every stage. 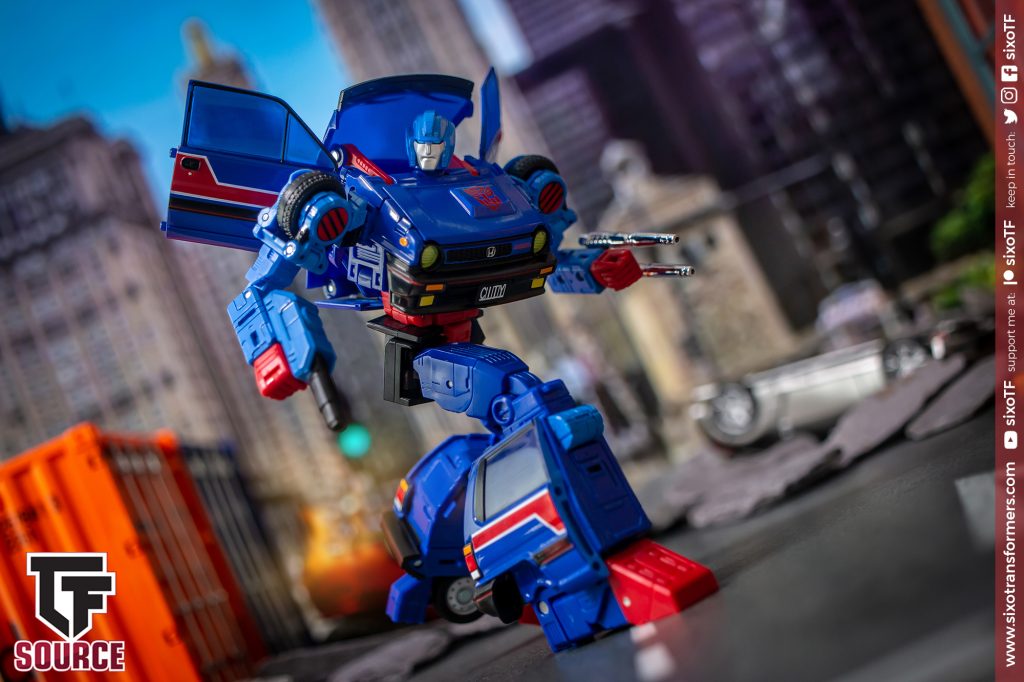 Joints glide with effortless elegance, panels click together with perfect precision, and ultimately, it all culminates in an operation so enjoyable that you’re immediately wanting to try it again and again. I have transformed my copy of MP-53 countless times already, yet still find it to be a thoroughly captivating activity every time. That it can be achieved in a mere matter of minutes is all the more satisfying. 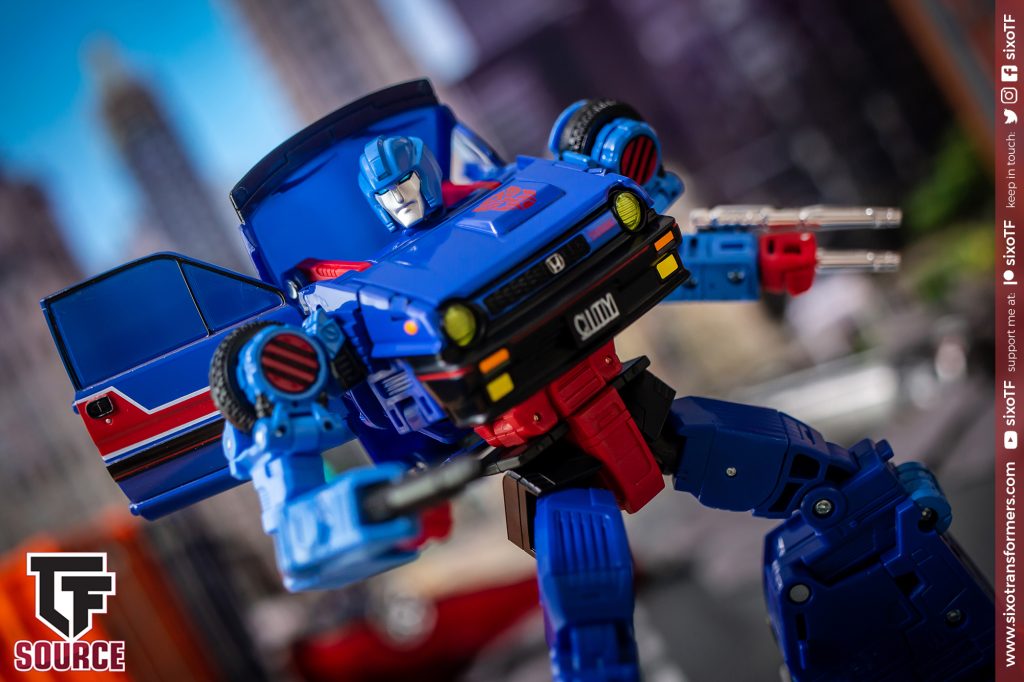 In many ways, it’s just another example of how MP-53 harkens back to what some consider the ‘golden age’ of Masterpiece, that being when designer Shogo Hasui was running the show. Less-taxing transformations were undoubtedly a feature of that time, alongside the kind of fluidity of design seen on Skids here. As established last time, you could almost fool yourself that this is a leftover product of the period. 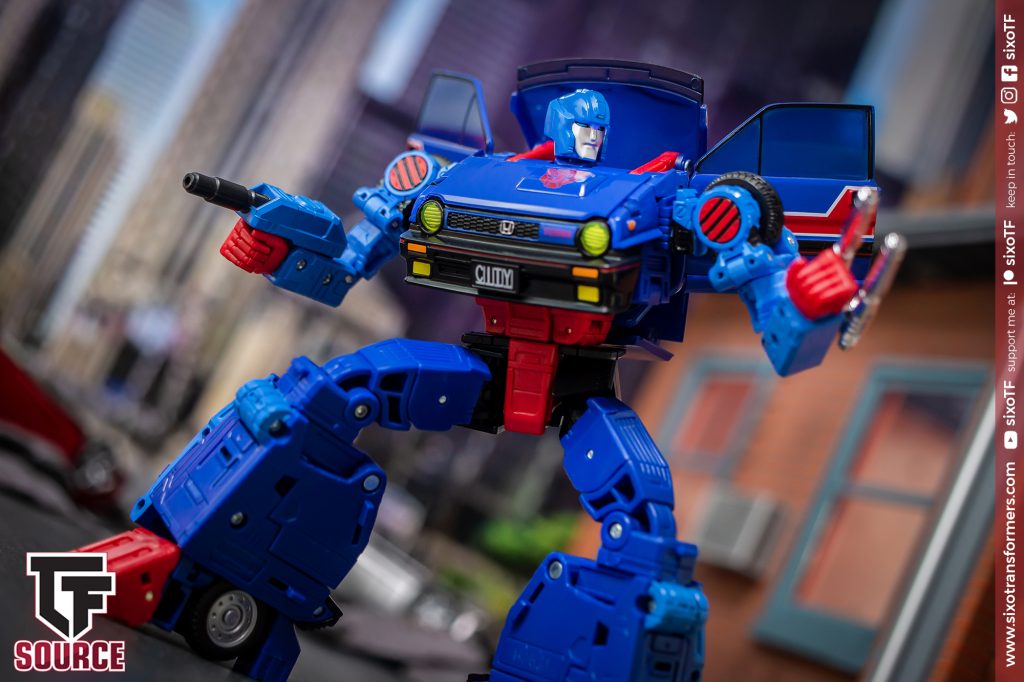 We’ve yet to gauge where the line’s future is heading at this point, especially with Kōjin Ōno now on board. However, it seems as though the upcoming MP-57 Skyfire follows a similar trend of uncomplicated conversions, so perhaps there’s hope yet for collectors who found MP-52 to be a step too far. Even if we’re seeing one or two isolated examples only to return to mega-elaborate transformation schemes once more, at least Skids should represent a tantalising prospect for those same fans. 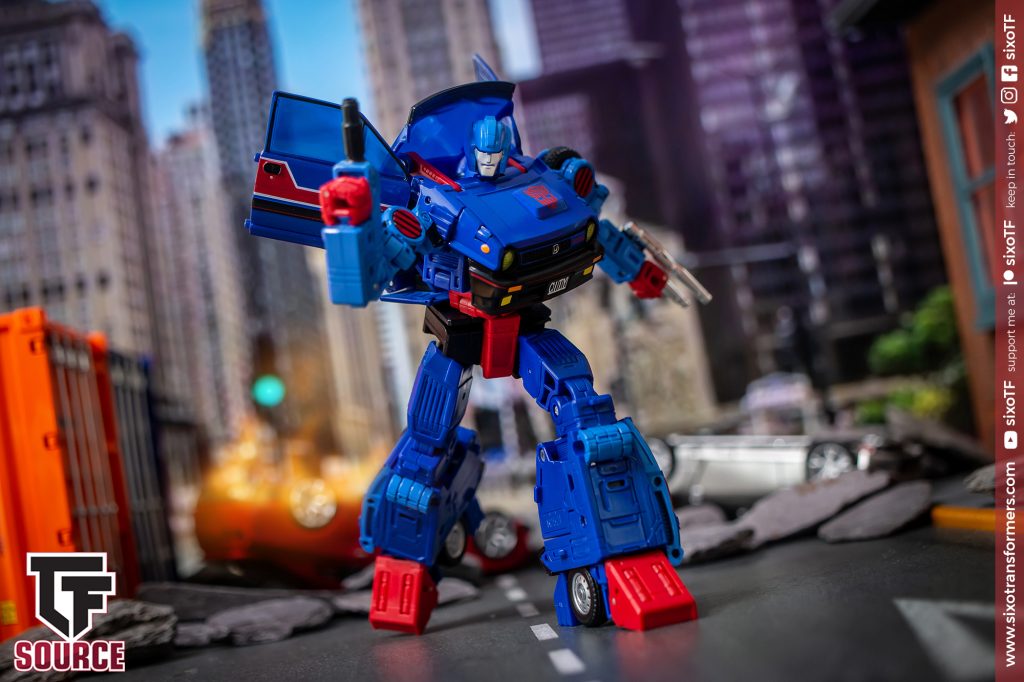 As for where it all ends up, it’s about as fine a representation of Skids as I think I ever did see, bringing the character to life in exceptional detail. We talked in part one about how the Autobot had ‘fallen through the cracks’ since the first days of the original figure in 1984. Still, you could say that this is finally his time to shine, with a souped-up Masterpiece effort that at least helps to make up for being so overlooked all these years. 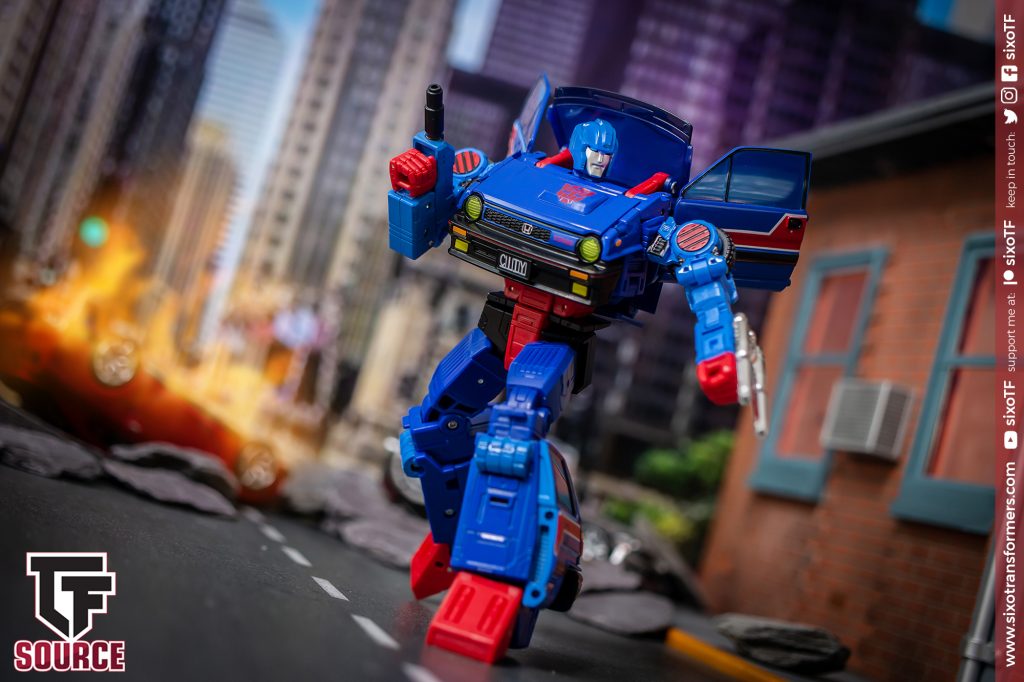 The design itself is a curiosity, not quite one thing or another in some ways. It doesn’t outright play into the current swing towards uber cartoon accuracy, yet at the same time, it’s not especially styled after the G1 toy, either. If anything, it falls somewhere in between, another element that brings it more in line with Hasui-originated releases, as though there’s an attempt to somehow make this the ‘perfect realisation’ of the character. 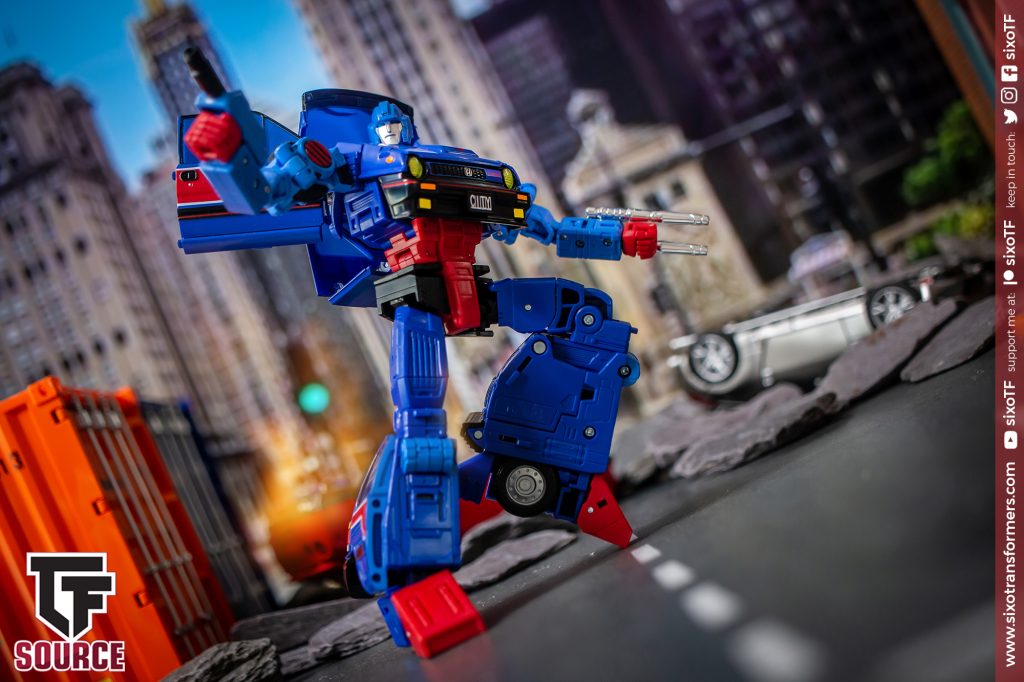 Consider that it clearly takes some inspiration from the animation, and certainly in terms of the colour scheme. The vibrant two-tone blues are unmistakably a nod towards how Skids was portrayed on-screen, as is the somewhat stylised interpretation of his classic head design. Yet the robot mode is flooded with a lot more greebles and moulded detailing than we’re used to seeing on modern Masterpiece releases, with much of it riffing on equivalent elements of the 1984 figure. 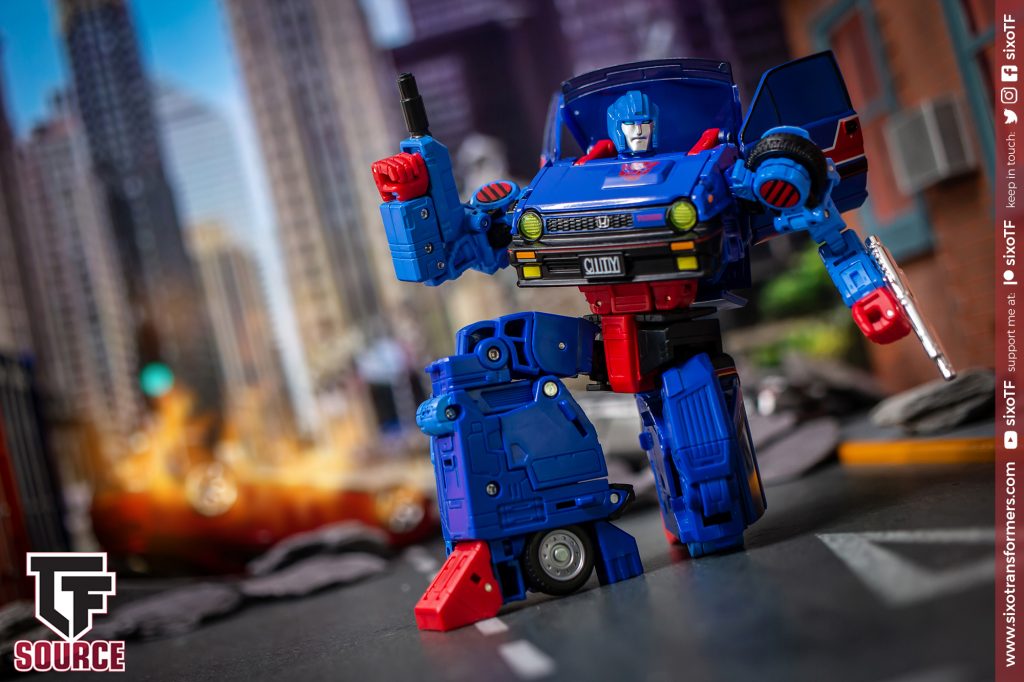 The thighs are perhaps the most obvious example, with striped detailing that instantly evokes the shiny silver stickers found on Skids’ classic counterpart, yet here finished in the same thick layer of blue paint as the rest of the body. The same is true all over, leaving you with a result that very much wants to have its cake and eat it. Some may be disappointed that it doesn’t steer harder into one camp or the other, but again, for Hasui enthusiasts, no doubt it will strike the right balance. 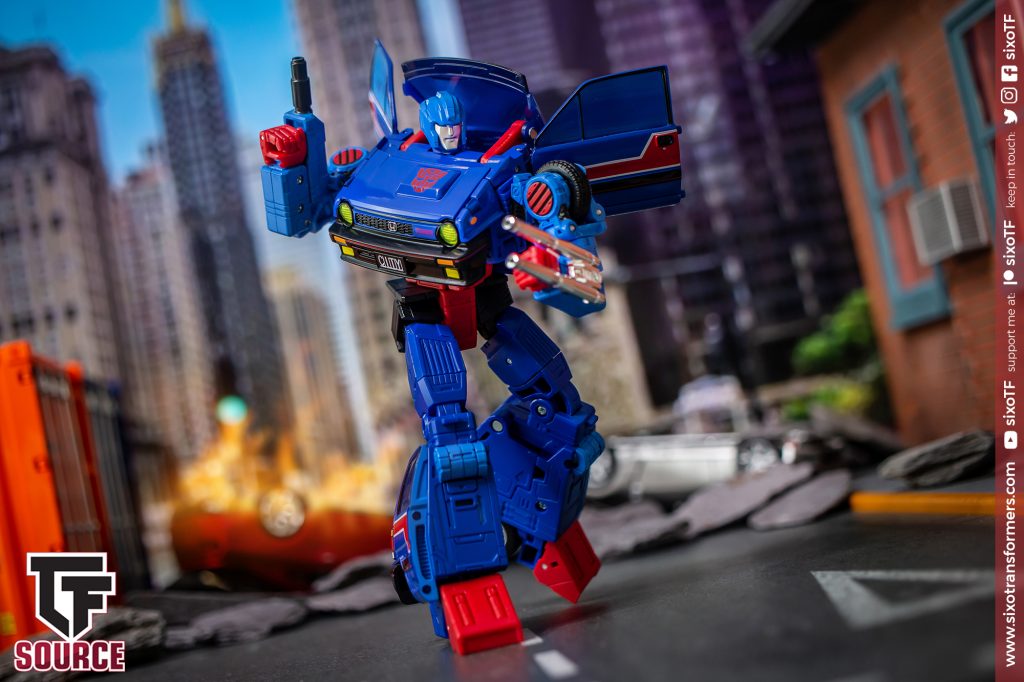 The other significant departure from the cartoon is the arms, or more specifically, the shoulders. The animation features a solution for this part of Skids’ frame that, honestly, is difficult to accurately describe, let alone translate into toy form somehow. Yet MP-53 has opted for more traditional appendages, no doubt to the preference of most collectors. Whilst it could have been hilarious to see the awkward, ungainly stylings of the character’s on-screen appearance made real, I’m sure this is the better solution all round, realistically speaking. 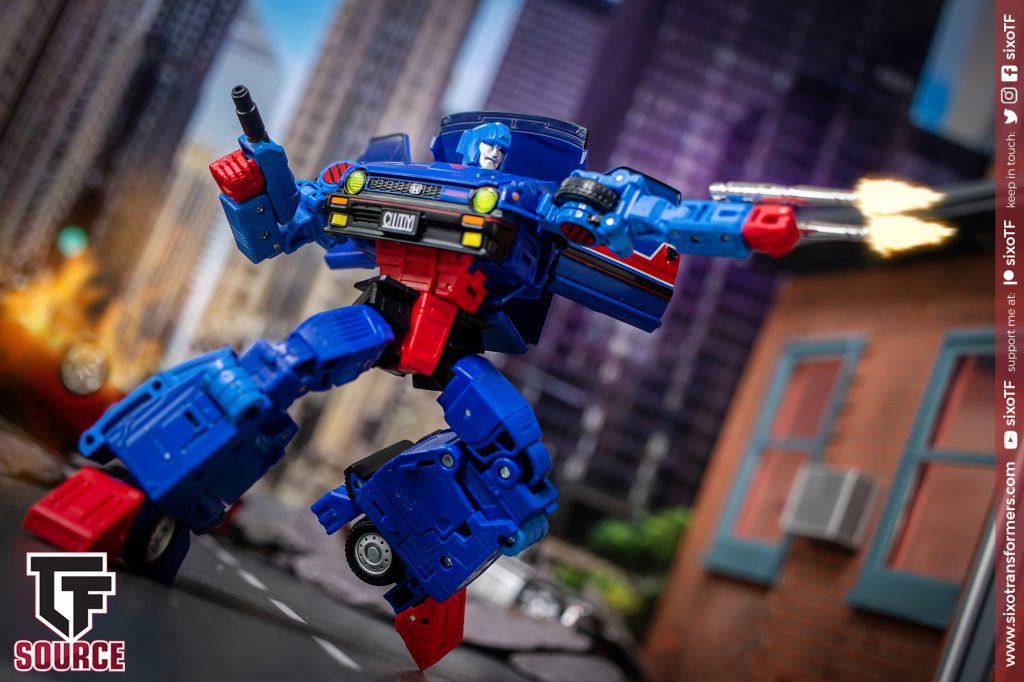 Besides, it allows for Skids to rock a superb level of articulation, to the degree that his G1 toy could only dream of. True, it may stop short of the giddy heights seen on the likes of MP-39 Sunstreaker, eschewing flourishes such as an ab crunch or butterfly hinges, but there’s still more than enough happening here to have you twisting and posing MP-53 for days. It’s not even the range of movement or the number of joints on offer that works so well, but more the simple poise and finesse with which the mould presents itself. You can’t help but want to pose it. 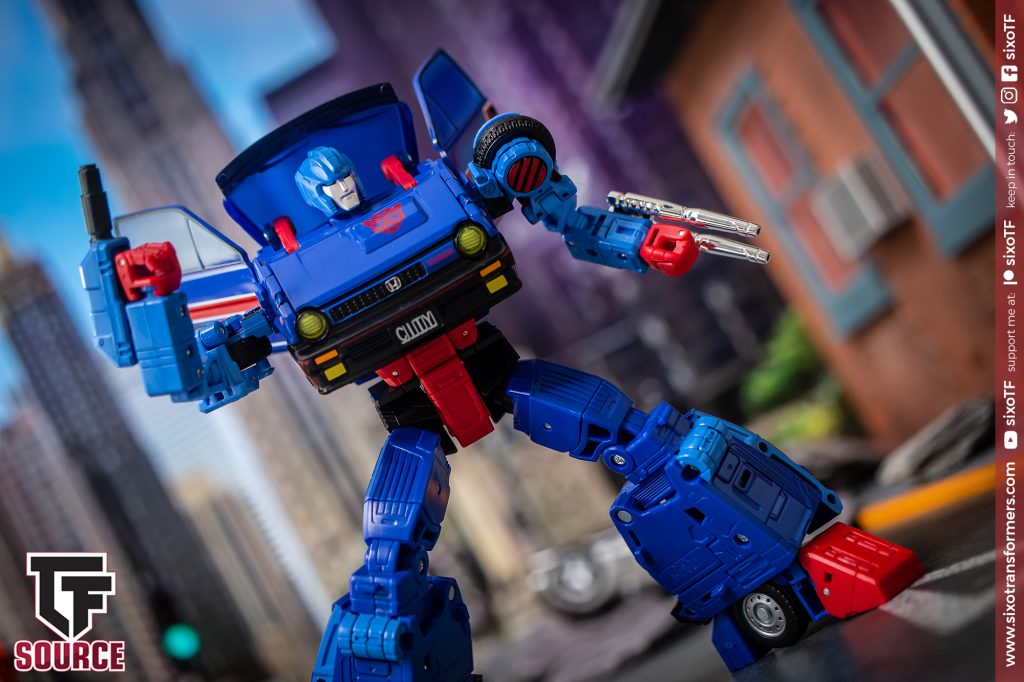 Naturally, that’s aided by the two accessories on offer, both of which represent Skids’ classic weapons as seen in the cartoon. That MP-53 is somewhat under-equipped versus the G1 toy is slightly noticeable, but it’s perhaps just another way this figure seeks to reference the animation to some degree. Besides, both guns look fab, with the liquid nitrogen rifle sporting the same gorgeously-painted finish as the toy itself and the twin electron blaster all stunningly sparkly in chrome. 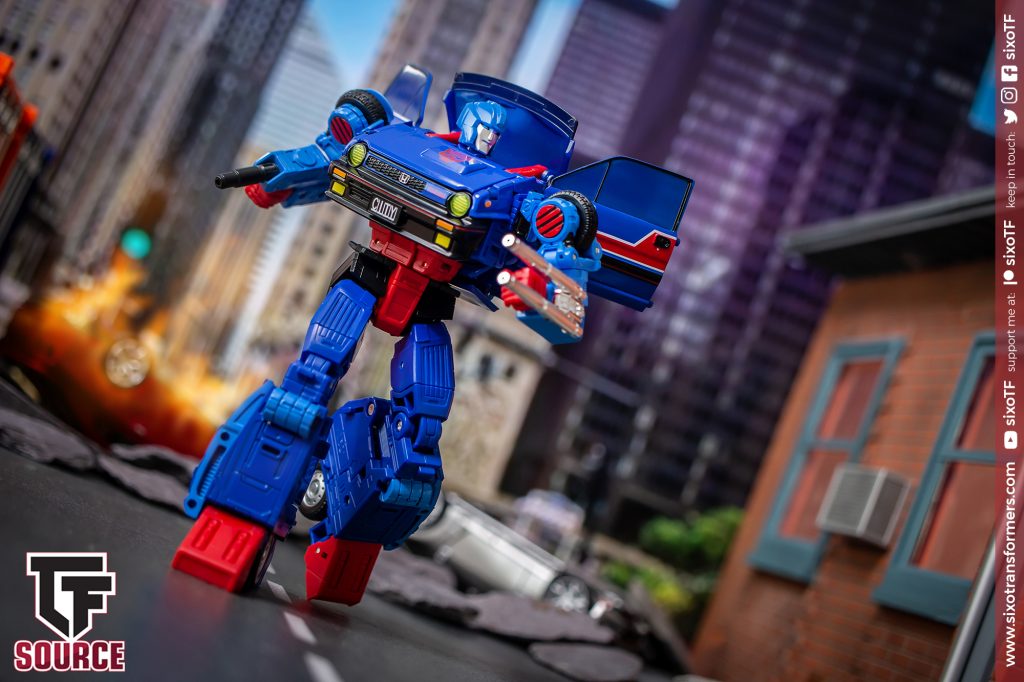 It’s a simple lot for a new Masterpiece ‘bot, but again, this is just another way that Skids feels like a real classic of the line. Think back to the days of MP-17 Prowl, when you’d open the box to see a phenomenal car mode and one single blaster taking up residence in the clamshell, and you’ll be prepared for what awaits you here. No fuss, no mess, just good, honest robot done well and served with a smile. 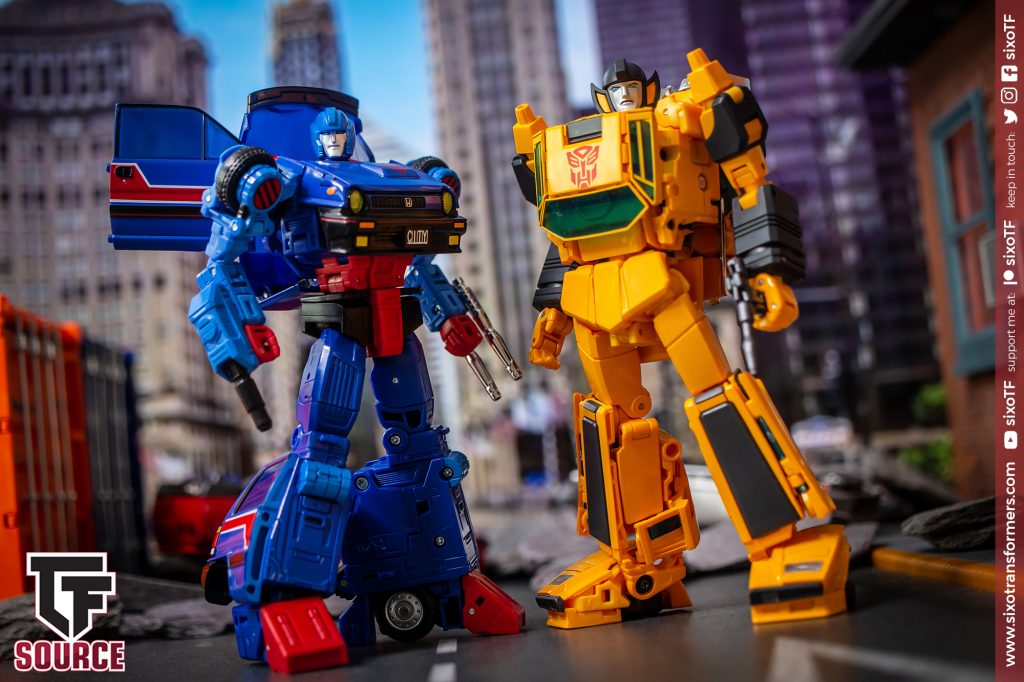 That’s not me saying that Skids is superior to the more intricate designs of late. I remain a massive fan of stuff like MP-39 Sunstreaker and just about everything else we’ve experienced since (with perhaps the odd exception). Furthermore, I maintain those puzzle-like transformations are enjoyable in their own right, not least for their exceptional cleverness. Yet there’s no denying that there’s a sense of ease and refinement found in MP-53 that is quite alluring, to the point where I’m all but certain it’s the most fun I’ve had with an MP mould for a minute. Certainly, if we were to get more of this sort of thing, I wouldn’t be complaining. 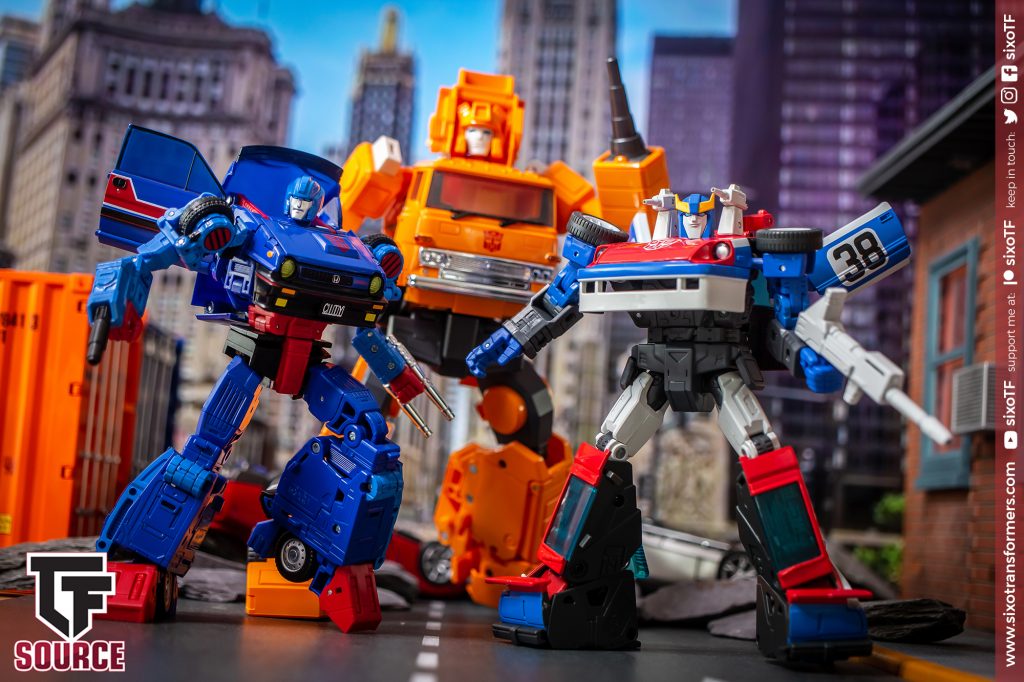 It also means that Skids fits in rather seamlessly alongside a large share of other Masterpiece toys. The more blended influences allow MP-53 to work with the anime trappings of more recent fare whist just as readily looking at home with earlier releases. What’s most astonishing is that of all the potential characters in the roster that I thought I’d be this happy to see done so well, I don’t think I ever imagined it being Skids. 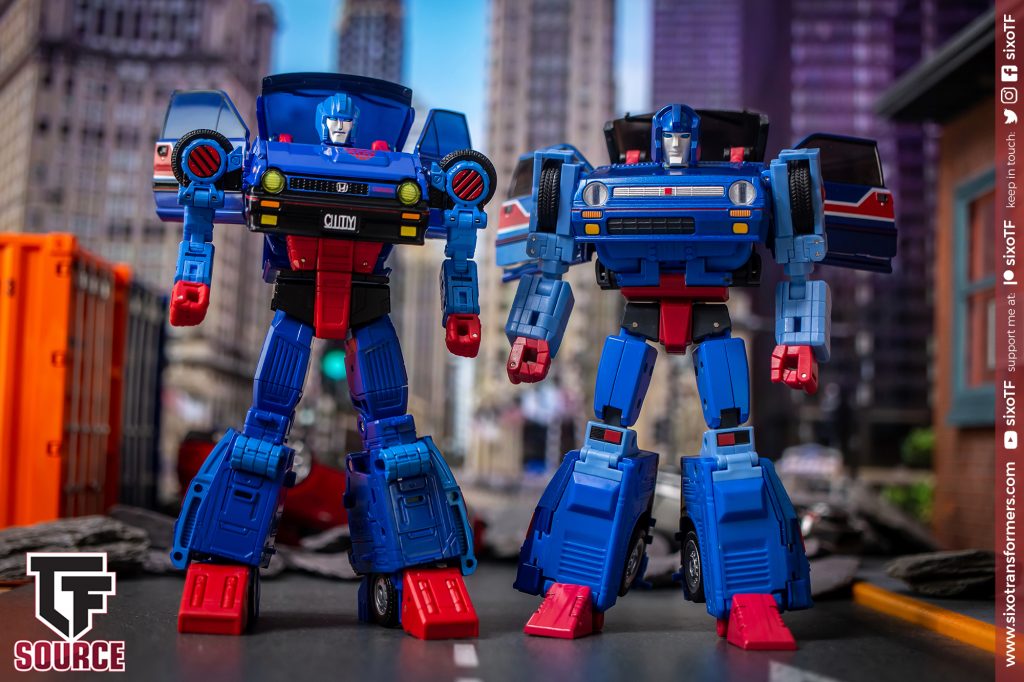 I suppose I thought of him as one of those lads who felt like they’d always be represented by a third party effort, as though he was never quite big league enough for the official line to give him his due. Now that he’s here, he easily outclasses the likes of X-Transbots Savant, by my estimation, rather effortlessly showing up the competition as a decent but ultimately quite clunky imitation versus the gold standard exhibited by TakaraTomy. I’ve said it before, but when they’re in fine form, there simply is no touching them. 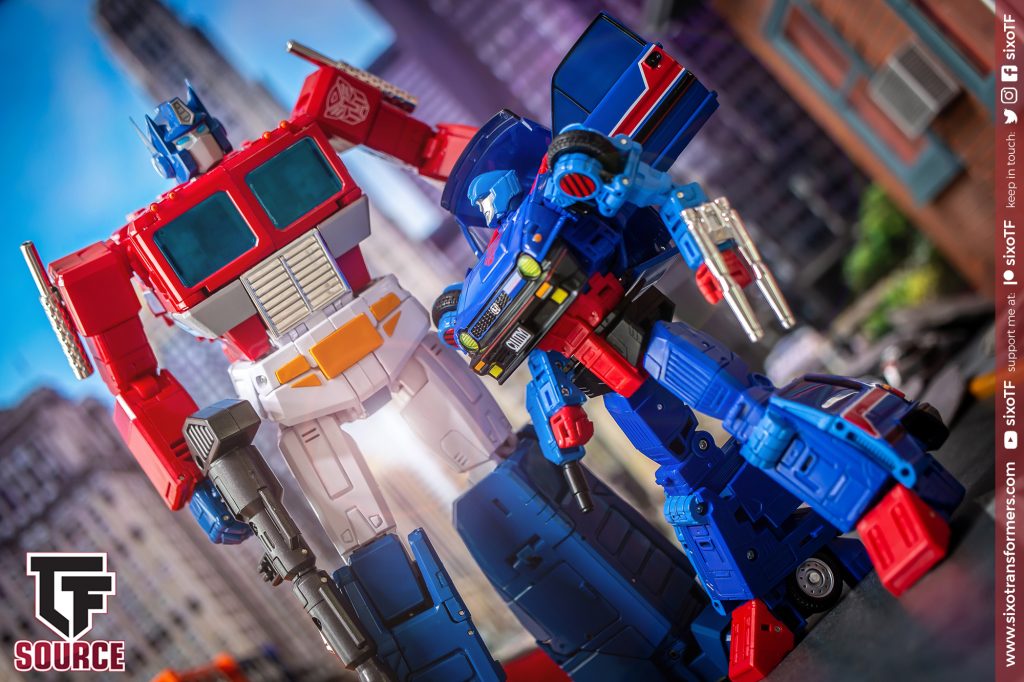 However, the real magic here is that they poured such evident love and affection into this design, especially considering the character’s former D-list status. It’s no doubt helped by a decent dollop of pride in bringing a faithful Honda City Turbo to life in connection with the car’s 40th anniversary, but even then, it feels like the designers have gone to town on what could’ve so easily been a ‘quick and dirty’ release. Seriously, who expected *Skids* to turn out this nice, eh? 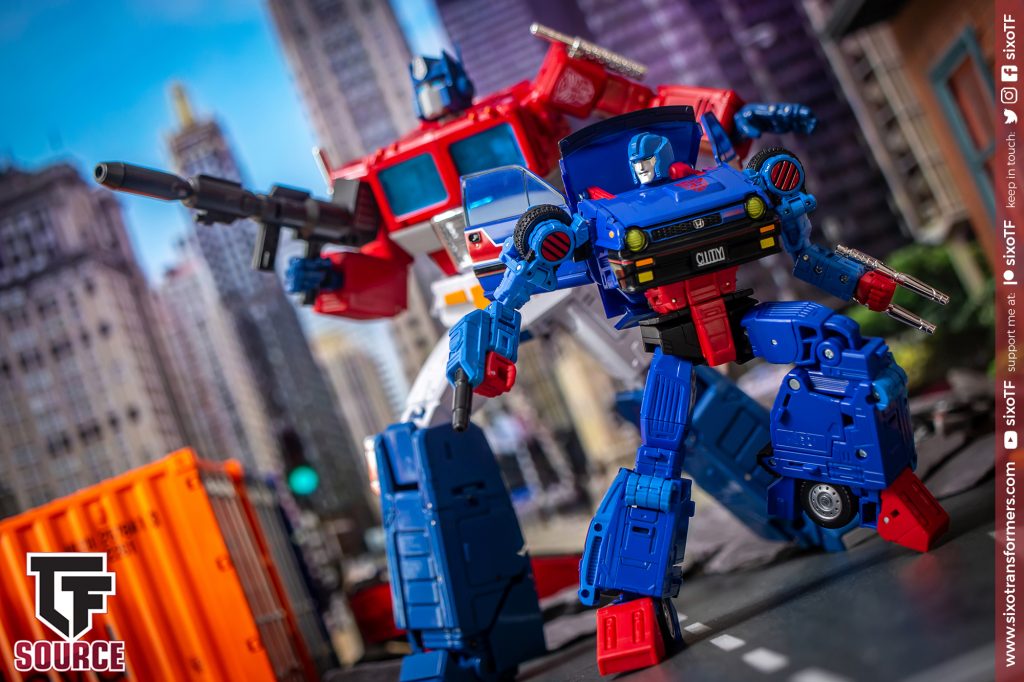 So, what else can I say? If you thought Masterpiece was ‘done’, MP-53 is here to prove you wrong. It’s an instant classic, a tour de force of the line, and a total love letter to the corresponding alternate form, all wrapped into one beautifully presented package. Skids has made his mark at long last. 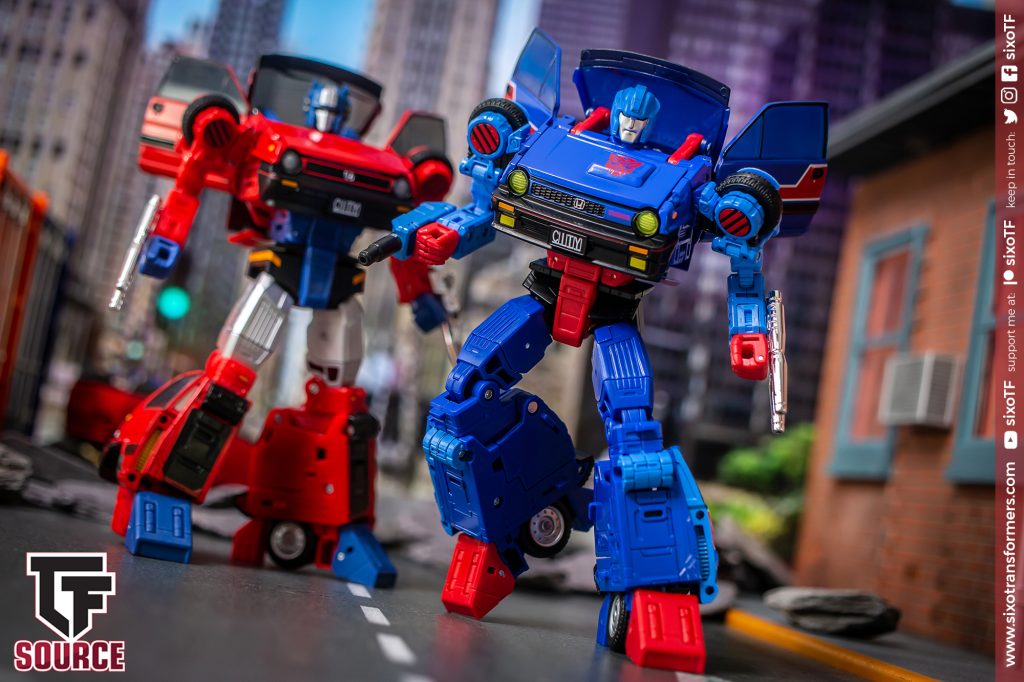 Oh, but just wait, as it’s about to get even better…

WHAT’S HOT? Both modes are drop-dead gorgeous, with a fluidity of design that is top drawer.

WHAT’S NOT? There’s no Motocompo scooter, which might be a disappointment to some.