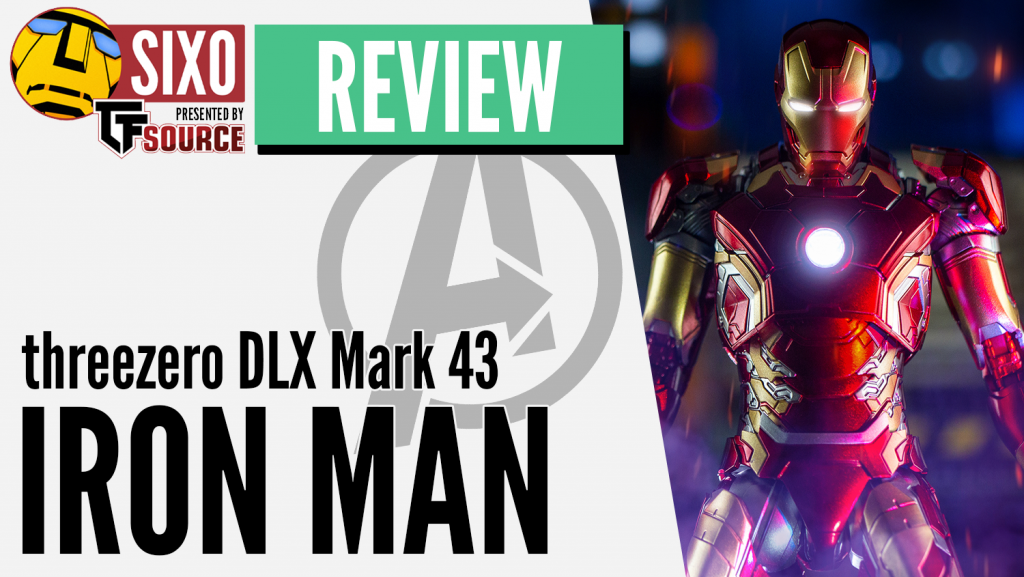 Starting on a personal note, whilst I’m generally more well-known for my love of all things robots in disguise, I am equally enthralled with other areas of geekery in my spare time. Perhaps it’s of little surprise that I’m a big MCU fan, then.

That said, my toy collecting has always been exclusively centered on Transformers, despite however attractive other lines seemed in the past. Still, having been squarely turned onto the incredible robo-related products from licensed outfit threezero, it was perhaps an inevitable leap to want to experience some of their Marvel merch too. One cheeky Iron Man couldn’t hurt, after all, could it? 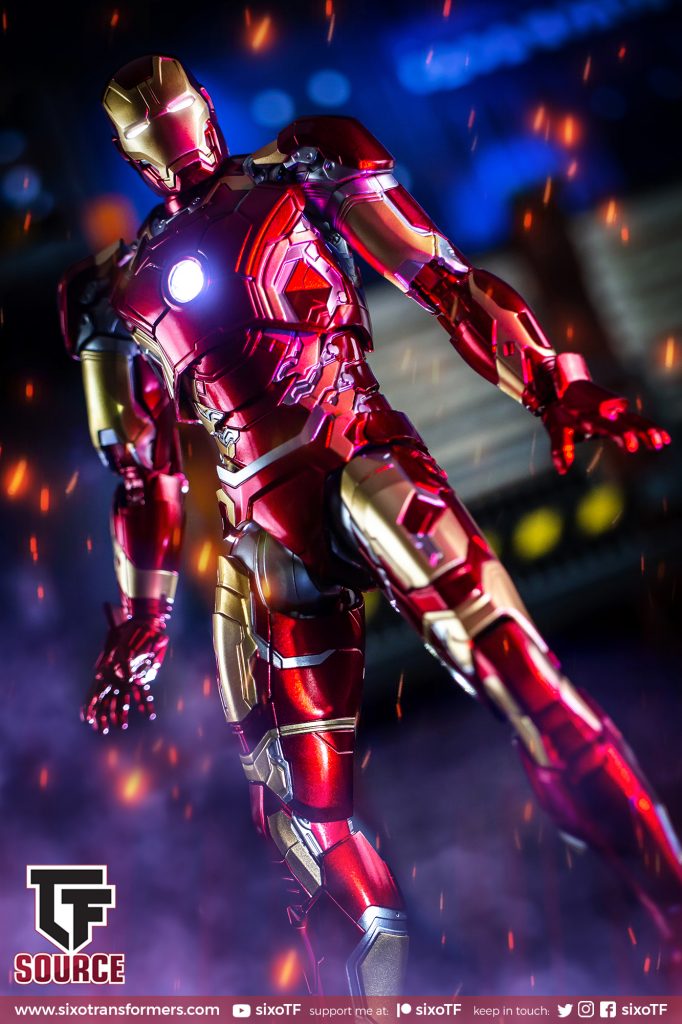 So I start this assessment with the full acknowledgement that I have no experience of any of threezero’s competitors in this sphere, be they Hot Toys or otherwise. I’m writing all this from the perspective of a complete newbie who was simply too enthralled by the idea of seeing the MCU’s poster boy done by what has already proven to be an outstanding toy producer. 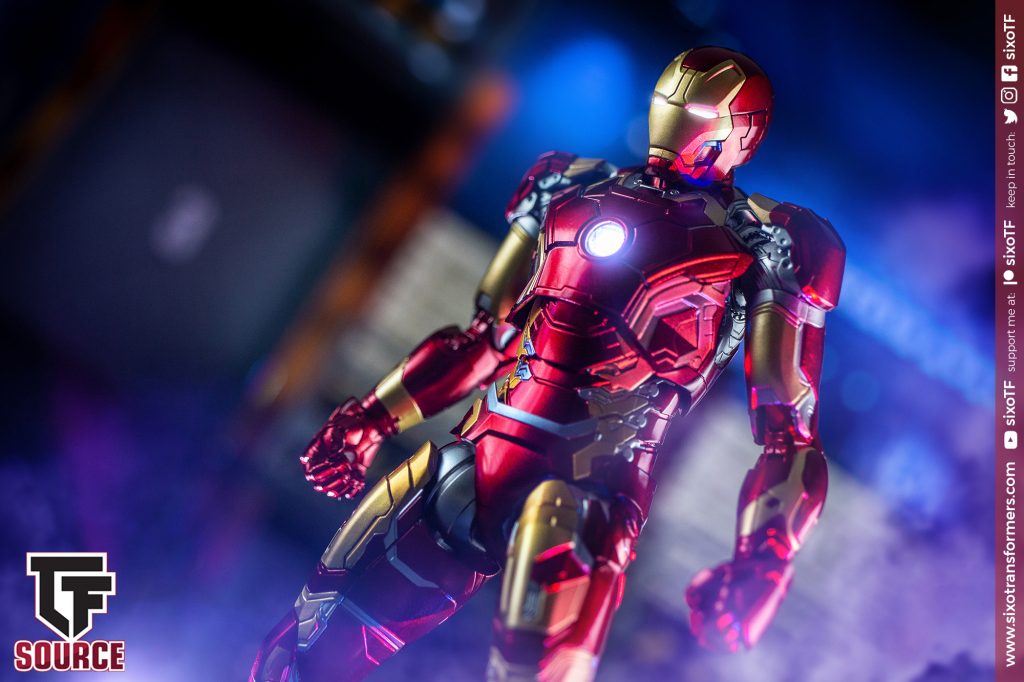 In that regard, it’s hard not to immediately be impressed here. The entire package exudes threezero’s trademark brand of quality and craftsmanship, even down to the (surprisingly compact) packaging and presentation. As soon as you get it open and hold the actual figure in your palm, it looks so superbly finished that it can’t help but dazzle you with its charms. 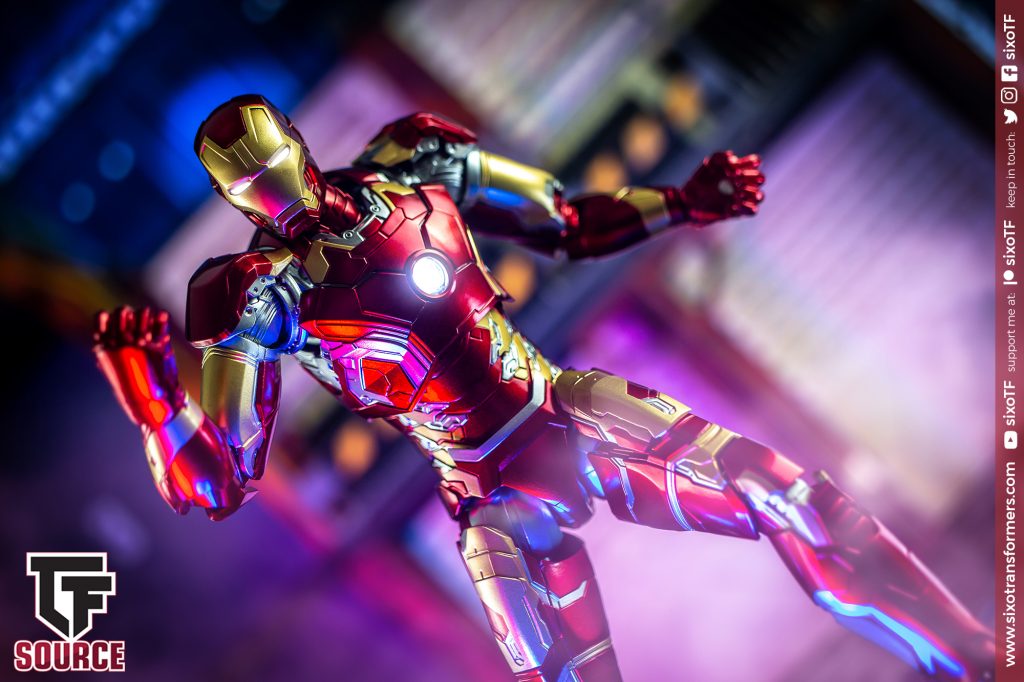 A lot of that is down to the shiny metallic finish on offer, with every lick of paint working overtime to make the toy look as premium as possible (to the point where it really does resemble a miniaturised Iron Man suit). The colours are a knockout, too, with the so-called ‘hot rod red’ just begging to capture your attention, especially given how it glistens against the light. 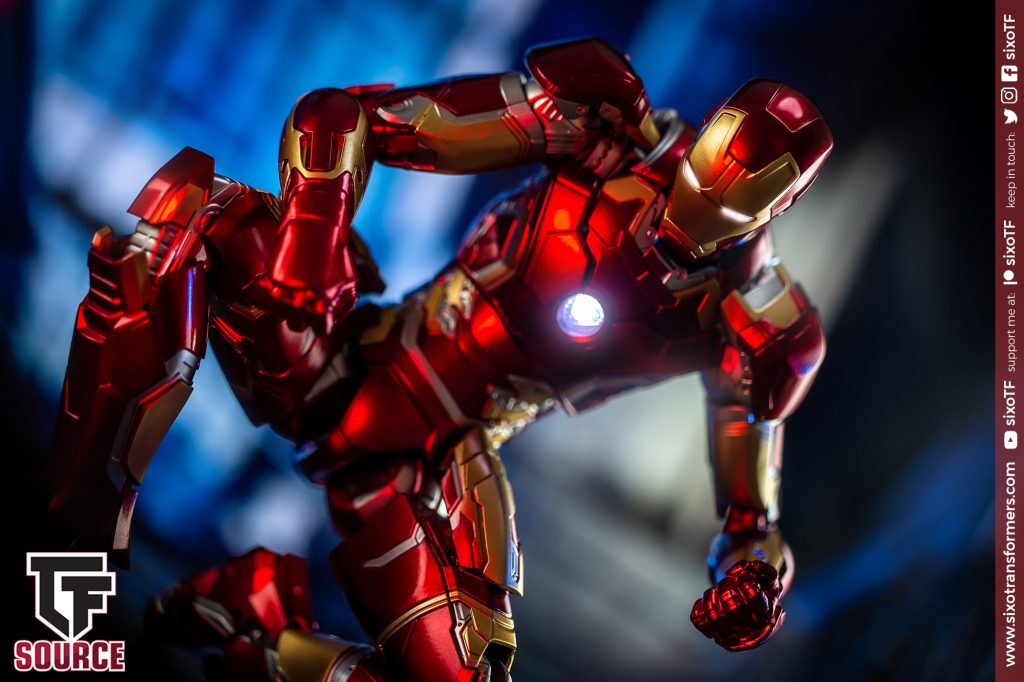 The sculpt is equally stunning, of course, with every line, angle and curve incredibly crisp and well-defined. Again, at only 6.5 inches tall, this figure likely stands a bit smaller than many might be expecting. Yet, the intricate level of detailing is rather remarkable up close and holds up to an intense amount of scrutiny. 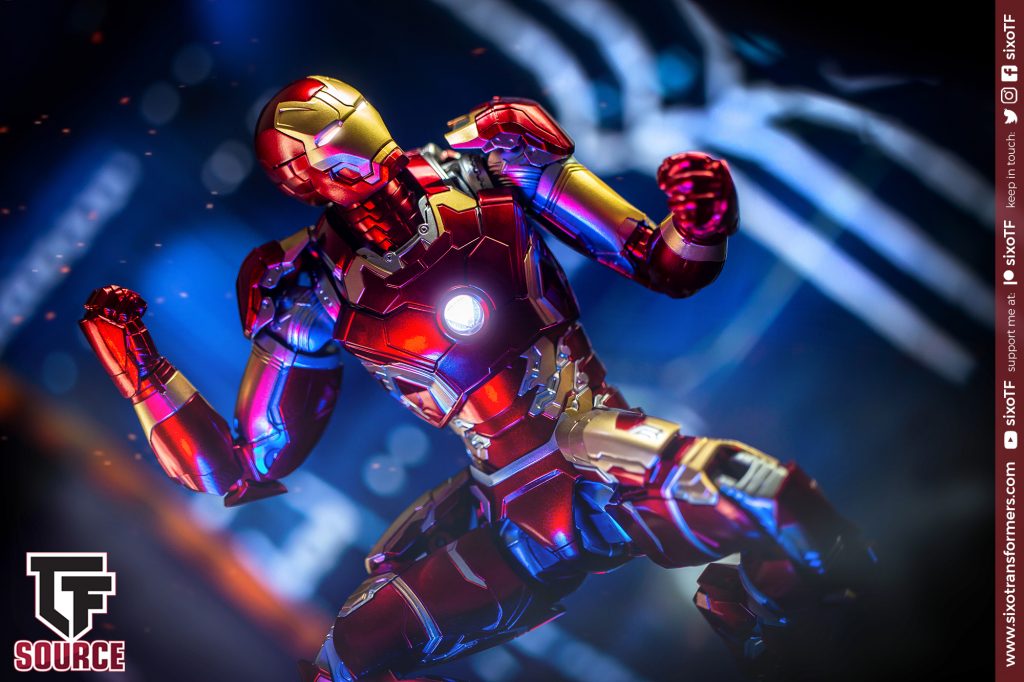 On first pass, this is just about everything I wanted it to be: a beautiful and exceptionally faithful recreation of the Iron Man armour as seen on the big screen, shrunken down to a size that doesn’t feel entirely cumbersome. I already have enough BIG Transformers toys; I certainly do not need to entertain anything so large in the Marvel arena that it threatens to dominate my collection. 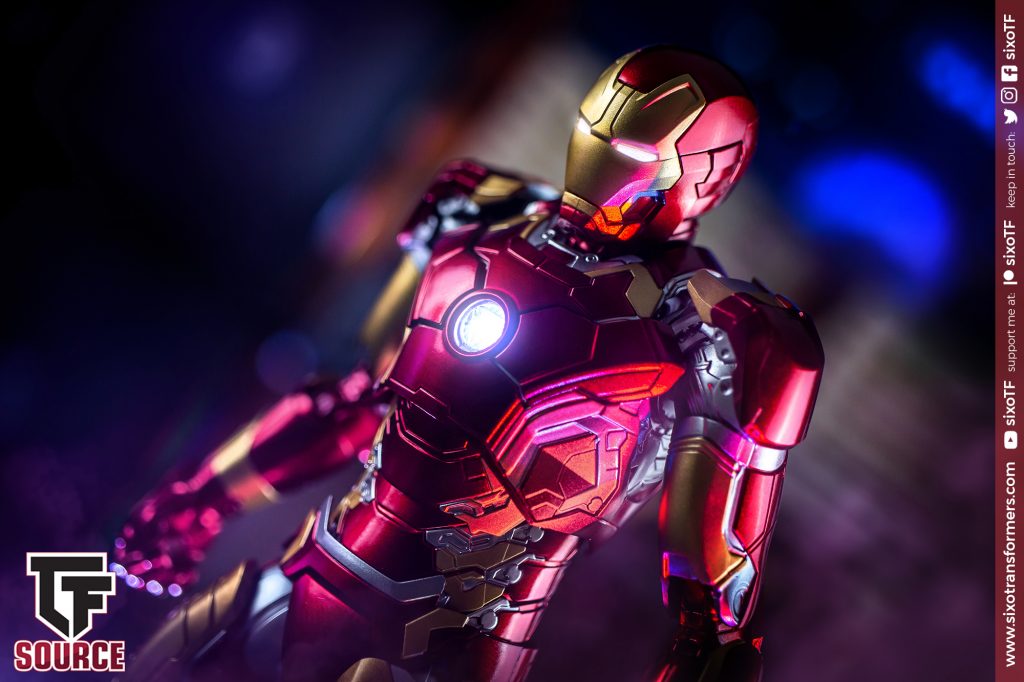 However, aside from its good looks, the toy feels fantastic to handle, too. Despite its more diminutive stature, threezero has still loaded it with its celebrated DLX diecast finish, making for a solid, weighty and robust-feeling action figure. It has the kind of heft that screams ‘premium collectable” and a super satisfying presence to boot, all packed into a less ungainly frame. 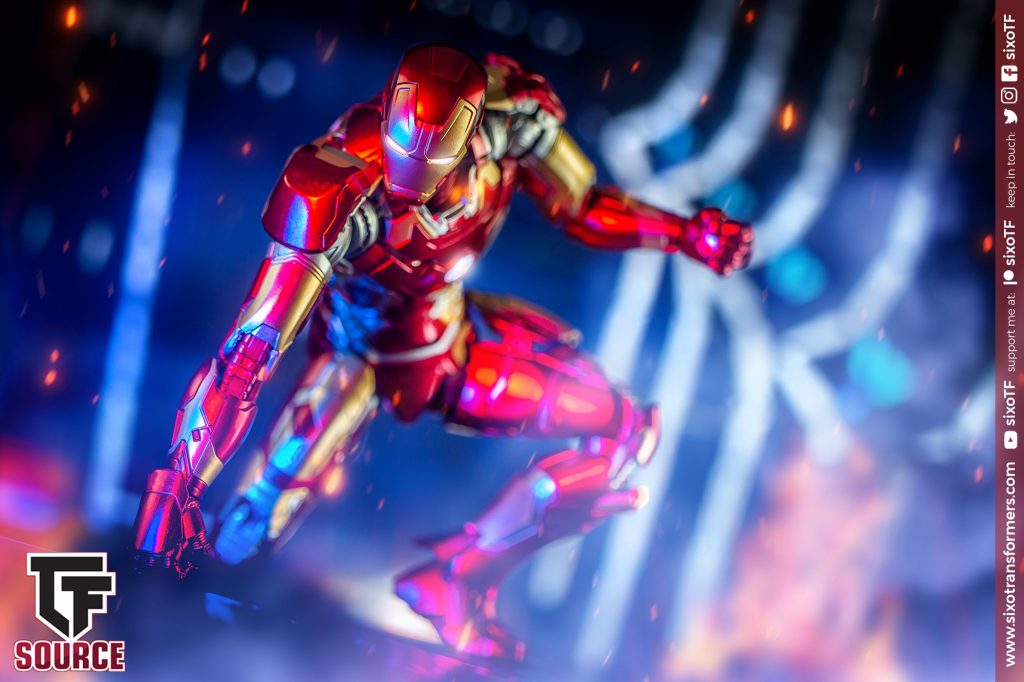 Make no mistake, though, it still has articulation aplenty, with a ridiculous number of joints loaded throughout. Anyone accustomed to threezero’s Transformers figures won’t be surprised about this, but it’s a delight to behold each and every time they put out something new. 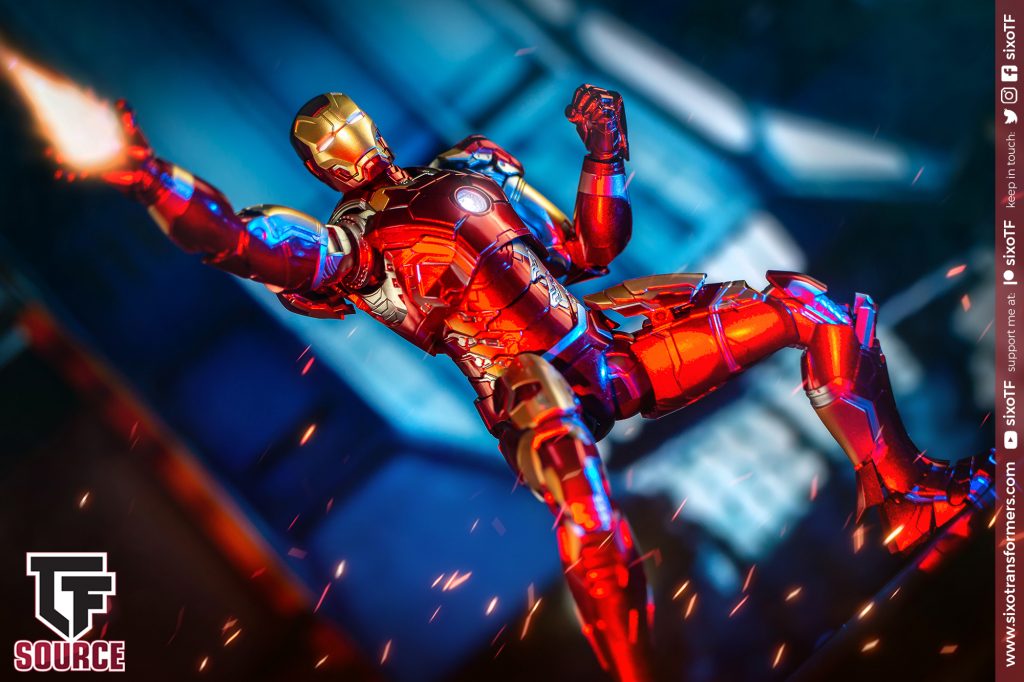 In Iron Man’s case, the articulation extends beyond just the obvious knee and elbow joints and the like. There’s a stellar ab crunch contorting the figure in at least several places to seem about as natural as possible and various other panels that all shift in an attempt to bring the screen representation of the character to life. There are moveable plates on areas such as the shins and shoulders, which all work independently, sometimes for the sake of clearance, and other times just because it looks cool. 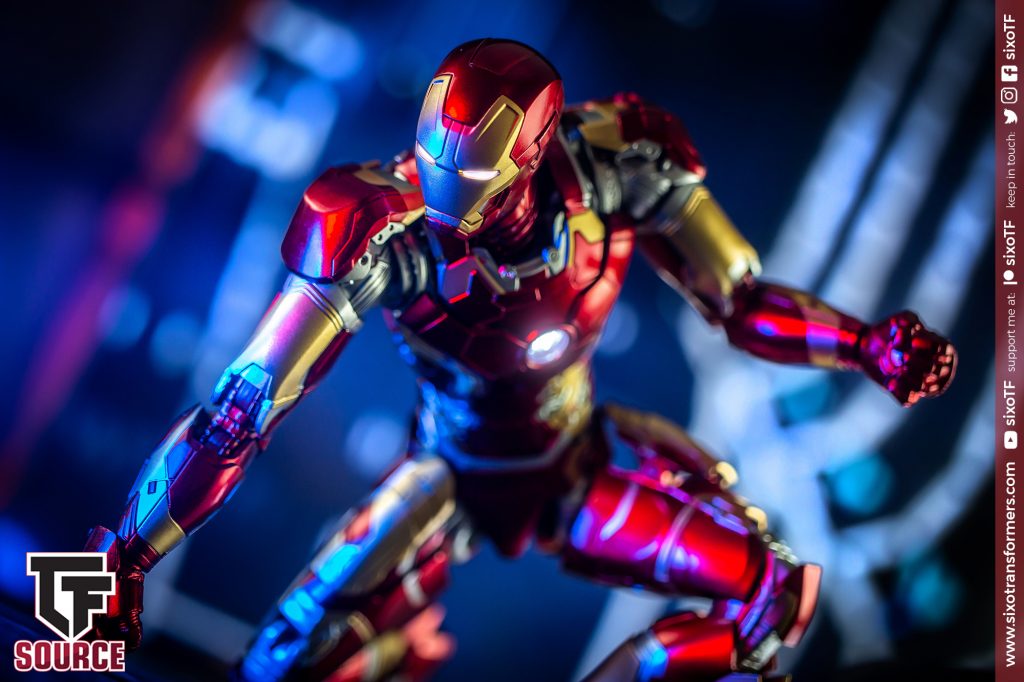 Added up, it allows for an expressive range of poseability, meaning that you should be able to manipulate the toy to your heart’s content and recreate some of his classic looks from the films. Iron Man pose, anyone? Well yeah, he can actually do it! 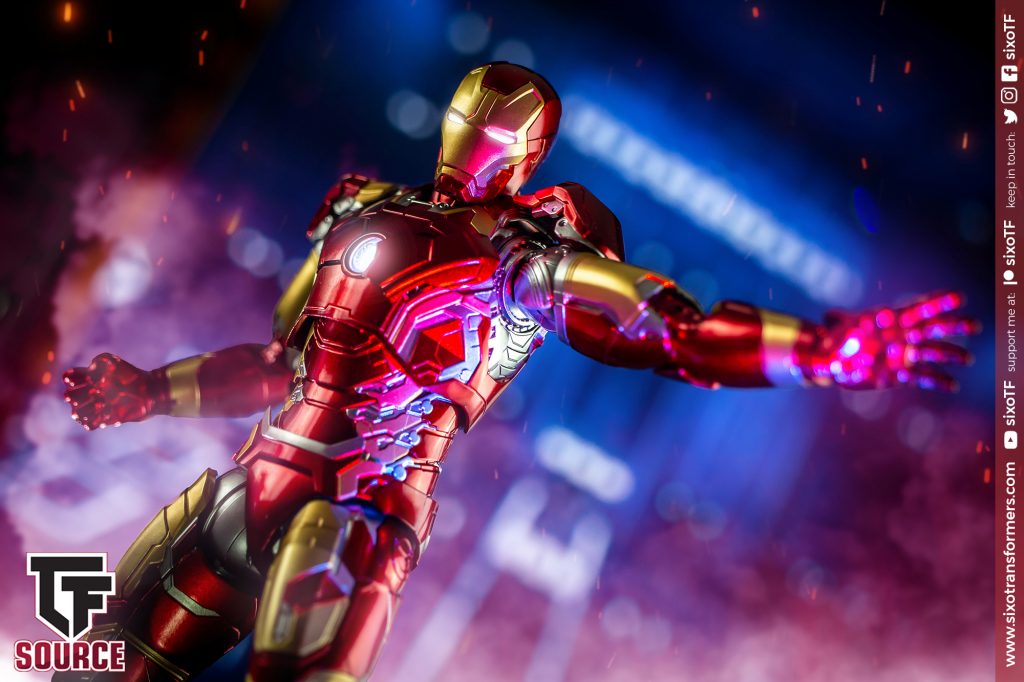 I’ve also become accustomed to the swap-out hands on threezero releases, but they might not be for everyone. It’s a solution I’m still slightly unsure of myself in some ways, not least because it requires storing all of the extra parts somewhere accessible for regular posing and play. Part of me would prefer the hands to be traditionally articulated, but given how good they look once in place, it’s hard to argue too much against what threezero has opted for here. 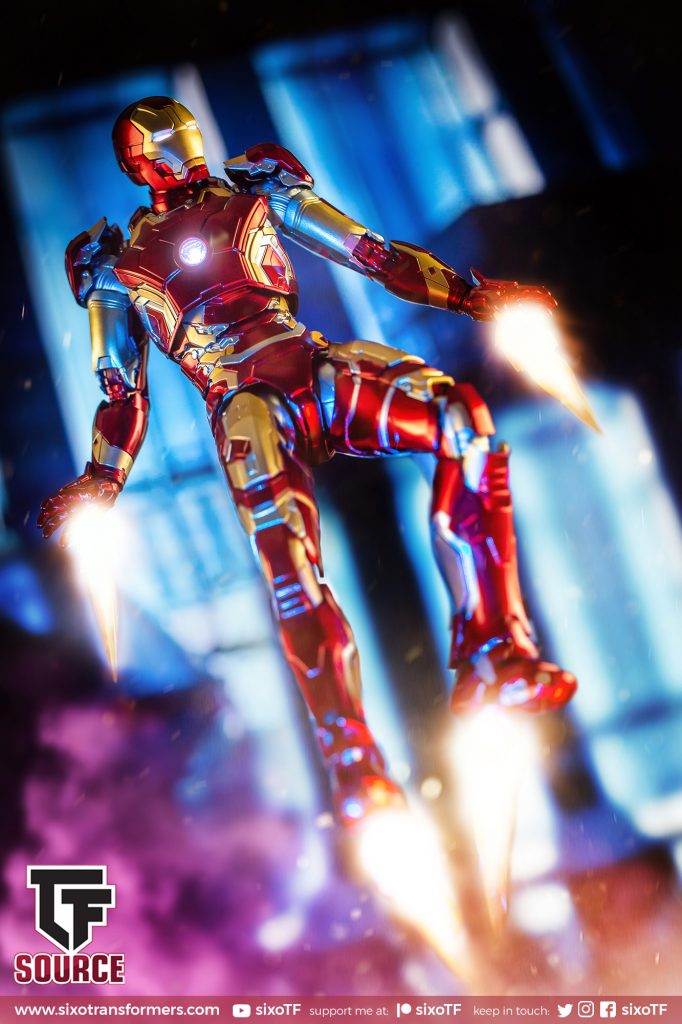 And, of course, there are blast effect pieces – Iron Man wouldn’t feel quite complete without them! They can be attached at the palms and on the bottom of the feet, allowing you to recreate Stark’s infamous repulsor attack or making him look like he’s in flight, especially once attached to the included stand. Overall, they all look excellent and add a little something to the package here. 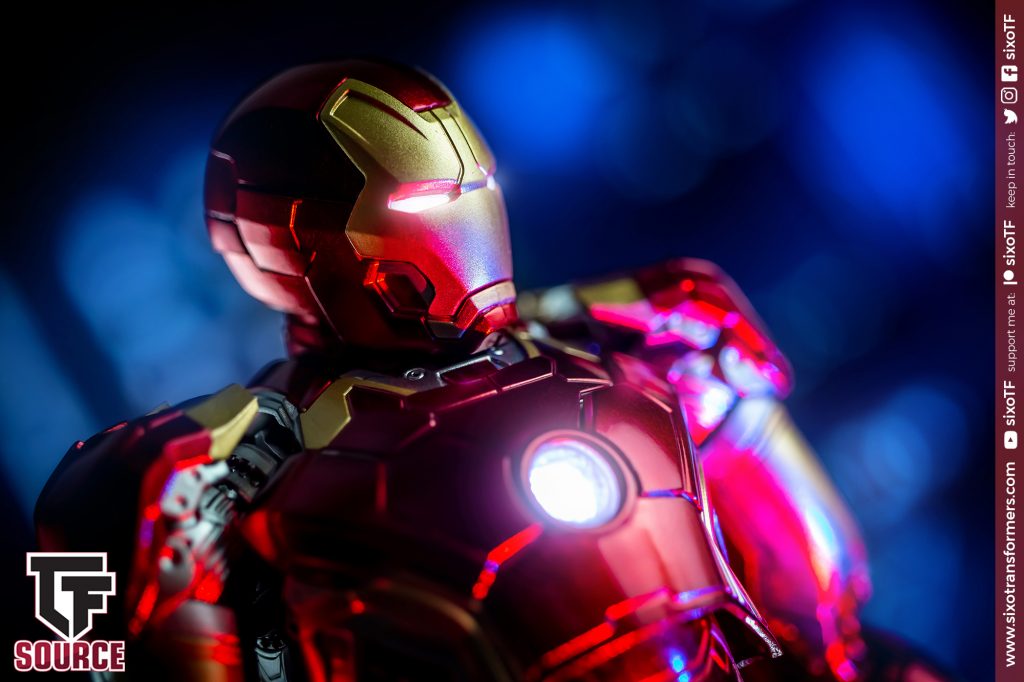 I suppose one area that some collectors may have liked to have seen would be swap-out options for the head design too, but it was not to be. I know that sort of thing is commonplace on Hot Toys and the like, even with representations of the man beneath the mask, but that’s clearly not what threezero are going for here. They’ve built a background on outstanding robotic designs, and so this suits them well. I can’t see them branching out to the more human-looking MCU characters anytime soon, either, but I guess you never know. 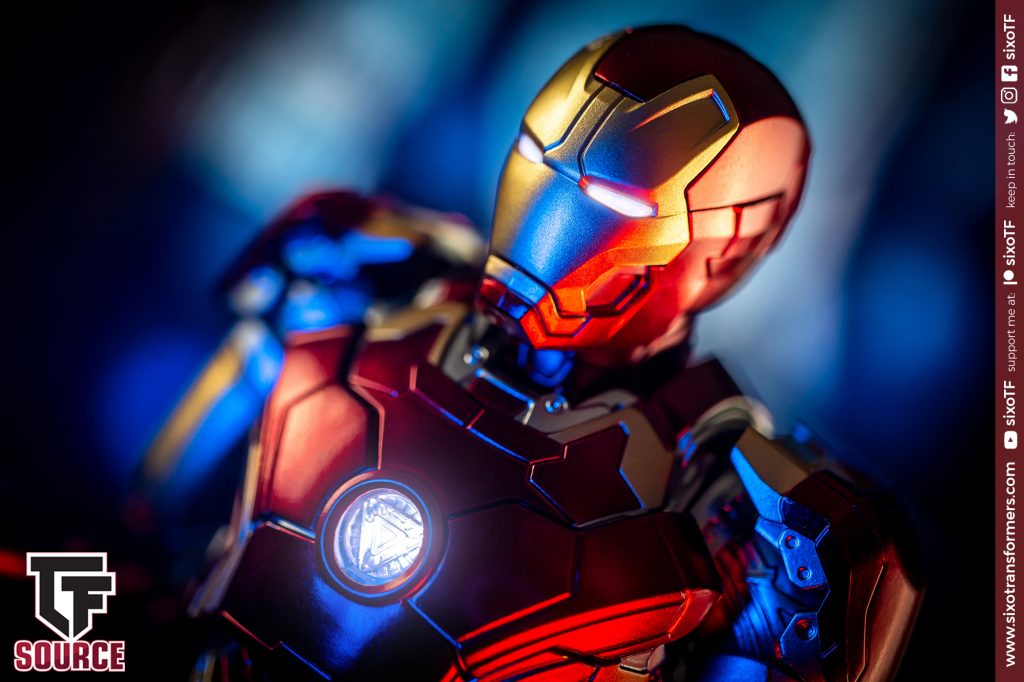 Still, there is plenty of expressiveness in the helmet design, faithfully bringing the Mark 43 helmet to life with aplomb. It’s a fairly ‘classic’ MCU Iron Man look, and unsurprisingly, threezero has nailed it here, expertly recreating it from every angle. It’s a joy to behold. 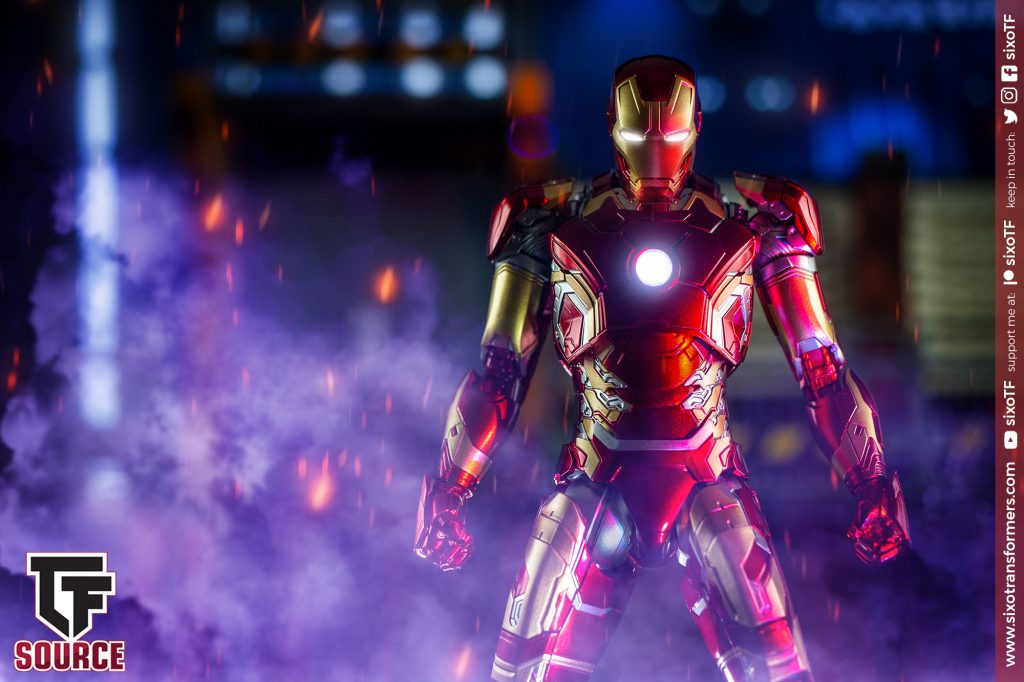 There are then some outstanding light-up gimmicks which bring the whole thing to life, both of which are easy to execute. For the head, you will need to remove part of the helmet and flick a switch, which is all a bit intricate but still relatively straightforward. The chest is even better – simply press on the arc reactor, and it lights up. Neat touch. 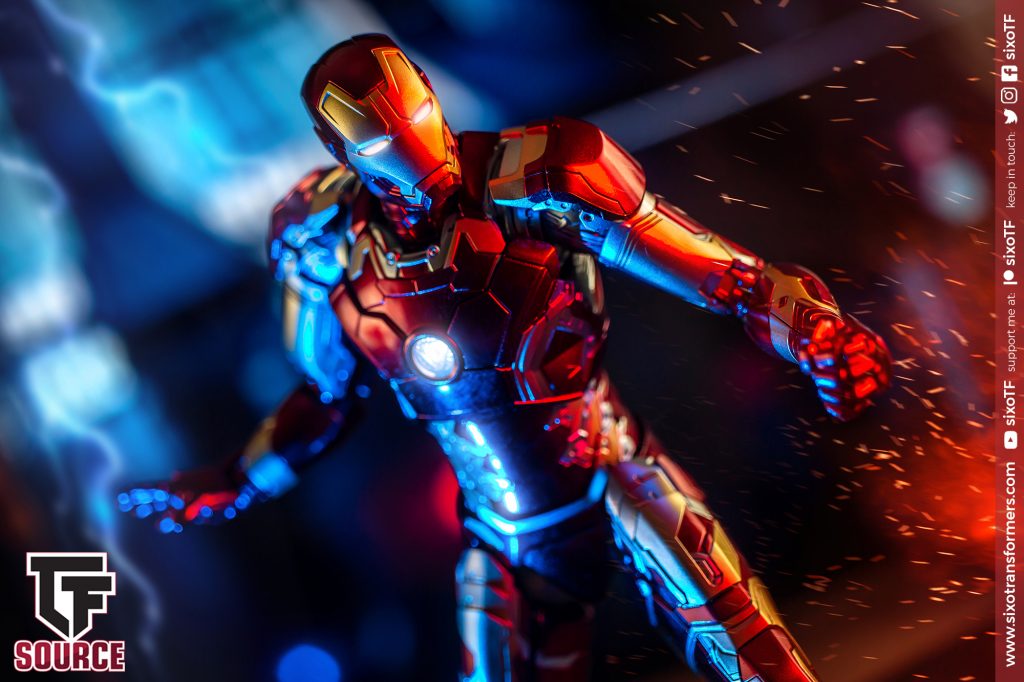 Once in play, the lights look nothing shy of show-stoppingly good, elevating this release beyond some simple plaything to all-around flawless recreation. I honestly cannot get enough of how good it looks up close, nor what a pleasure it has been to photograph! 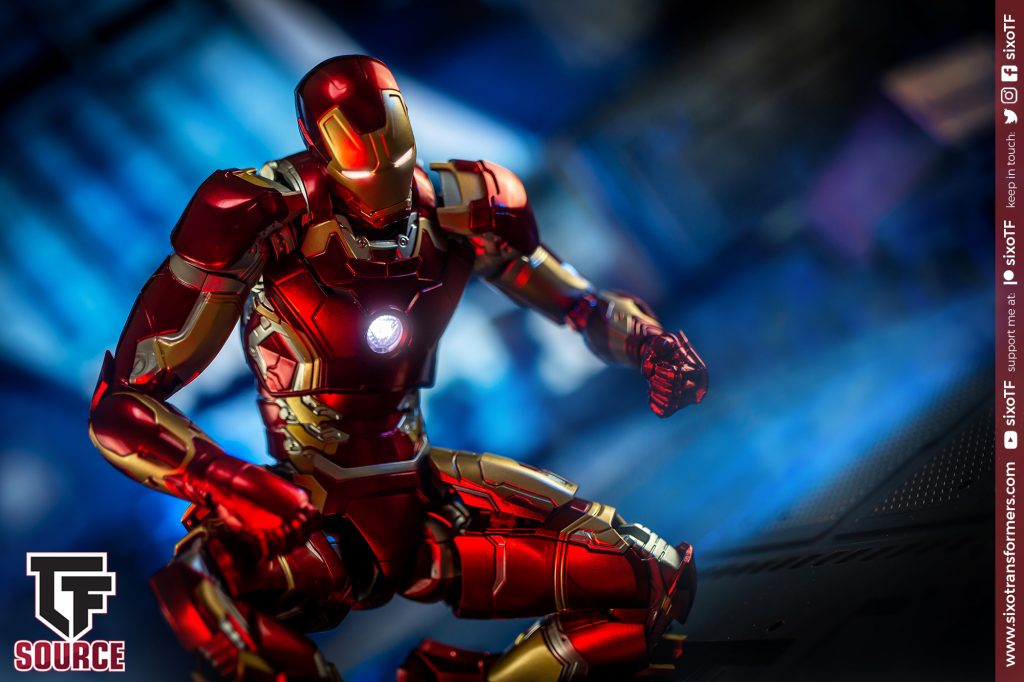 Perhaps my only slight pause here is some reasonably delicate parts in some areas, particularly some of the small moving panels on areas such as the shins. I would certainly advise some caution when articulating the toy, as even the instructions go to great lengths to warn about potential damage and paint scrape if you’re too rough and ready with it. 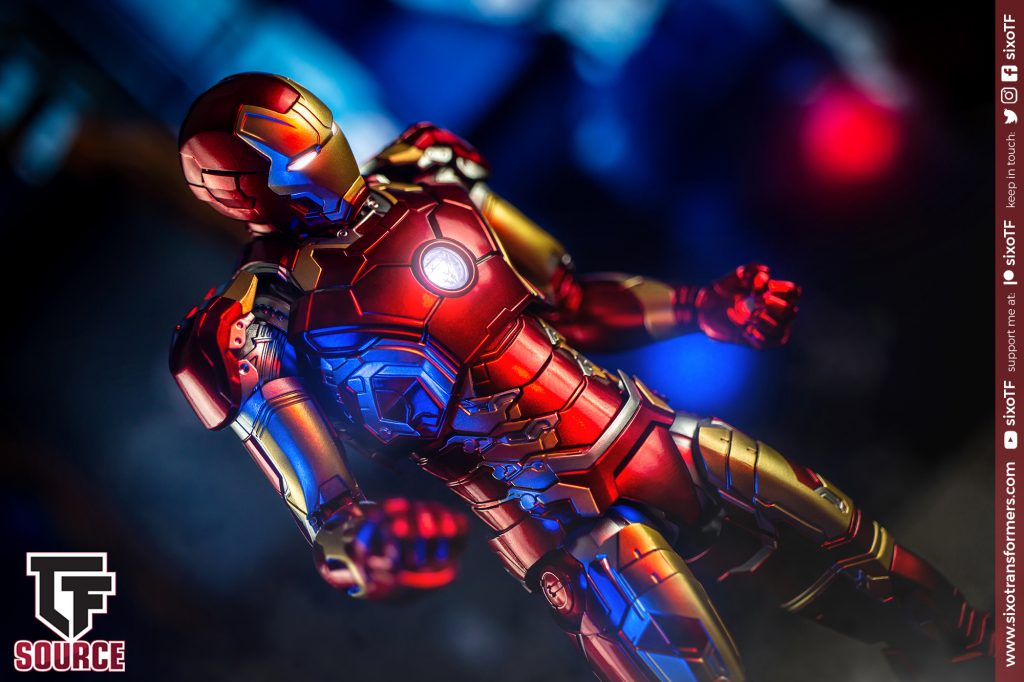 Still, there’s no doubt it’s a fabulous representation of the MCU’s most famous face, now brought to life in incredible detail. I may not have many frames for reference from competing toylines, but this is all the Iron Man I could want for my money. 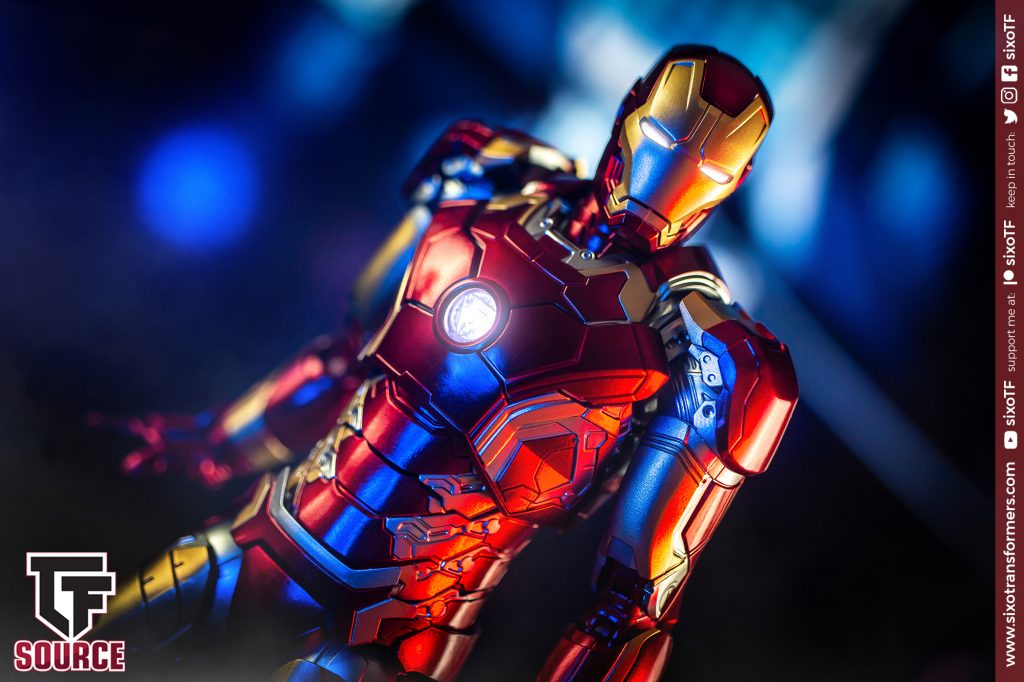 Well, I say that, but I’m now eyeing up the various other versions that threezero have in the pipeline, aren’t I? Mark 3, Mark 46, Mark 50, Iron Patriot… surely there’ll be more on the way, too… heaven help me, but I think I’ve opened a floodgate with this thing somehow. Turns out that one was a danger, to begin with! 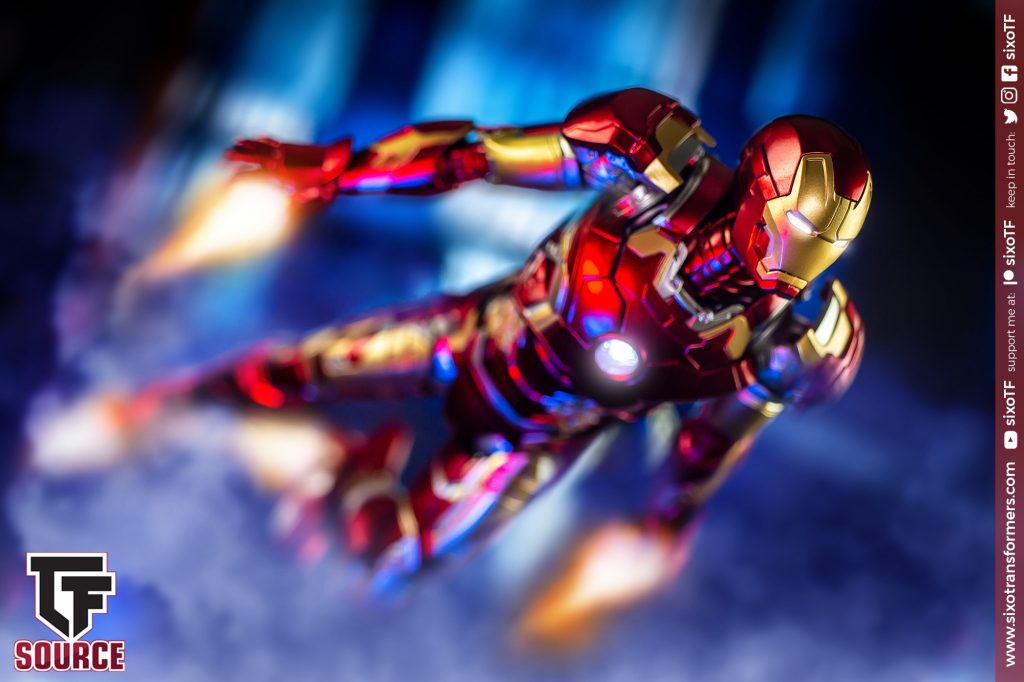 Tony Stark once said that part of the journey is the end. That may be true, but I can guarantee it’s not the case just yet if threezero keeps making them as good as this.

WHAT’S HOT? Stunning to look at, fabulous to hold and with a top-notch quality finish. What’s not to like?

WHAT’S NOT? Some of the panels need due care and attention to avoid damage.