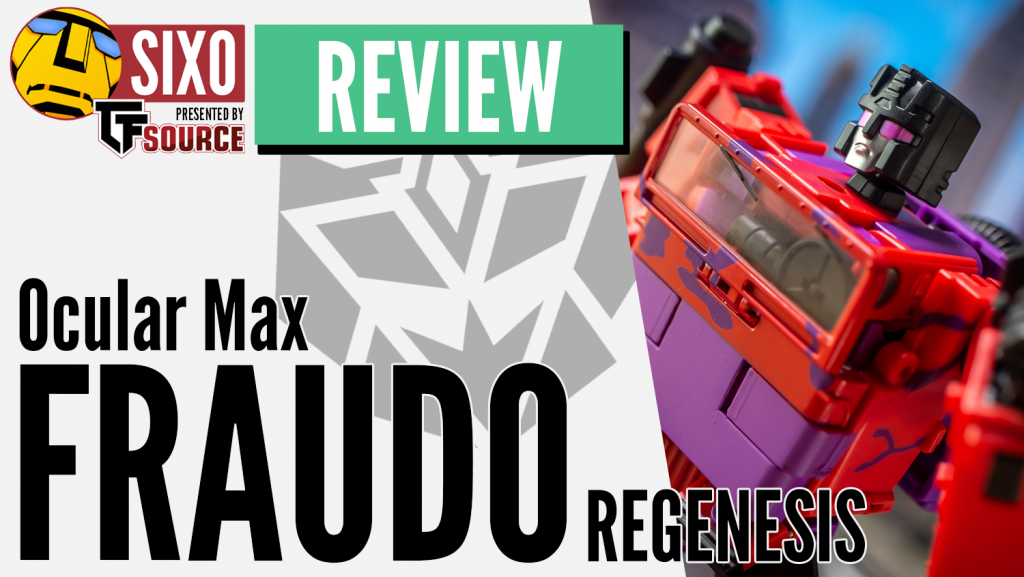 For a while now, we’ve been treated to a steady drip of G2-styled stuff from various third-party manufacturers, which has been a much-needed tonic considering the scarcity of it in the official Masterpiece line in recent years. There are several sets of Stunticons in suitably garish colours already, along with Consturcticons in both yellow and orange flavours too. 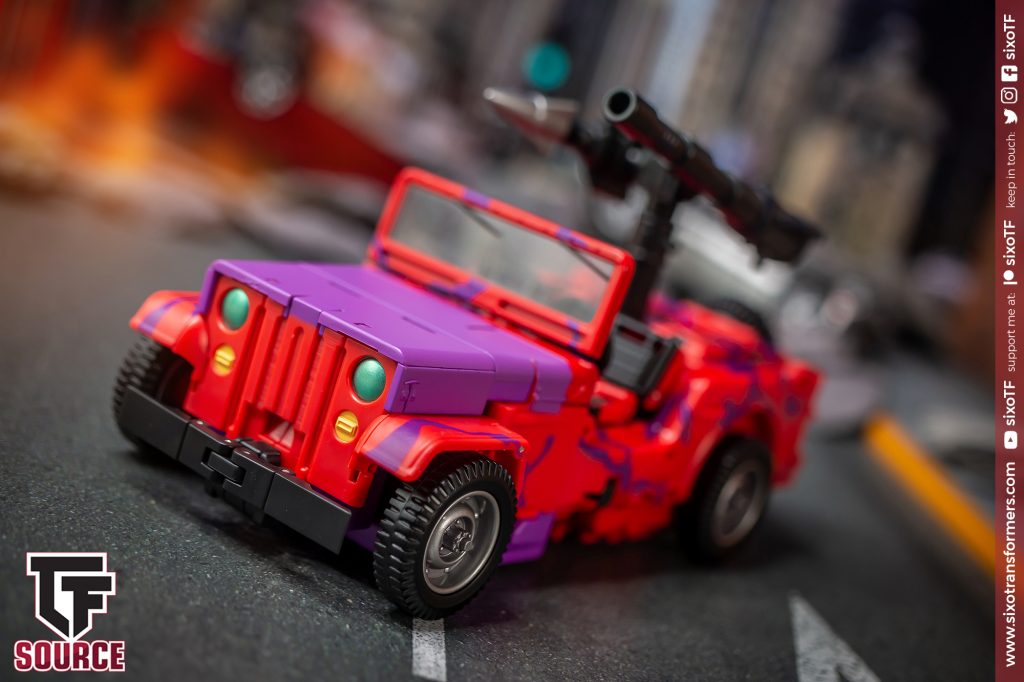 So it was high time that someone tackled the Combaticons then, and who better than Ocular Max? After all, their take on the team proved to be one of the major highlights of last year’s collecting. That the combined mode had its quirks is almost a moot point, given how great each of the five individual releases proved to be. 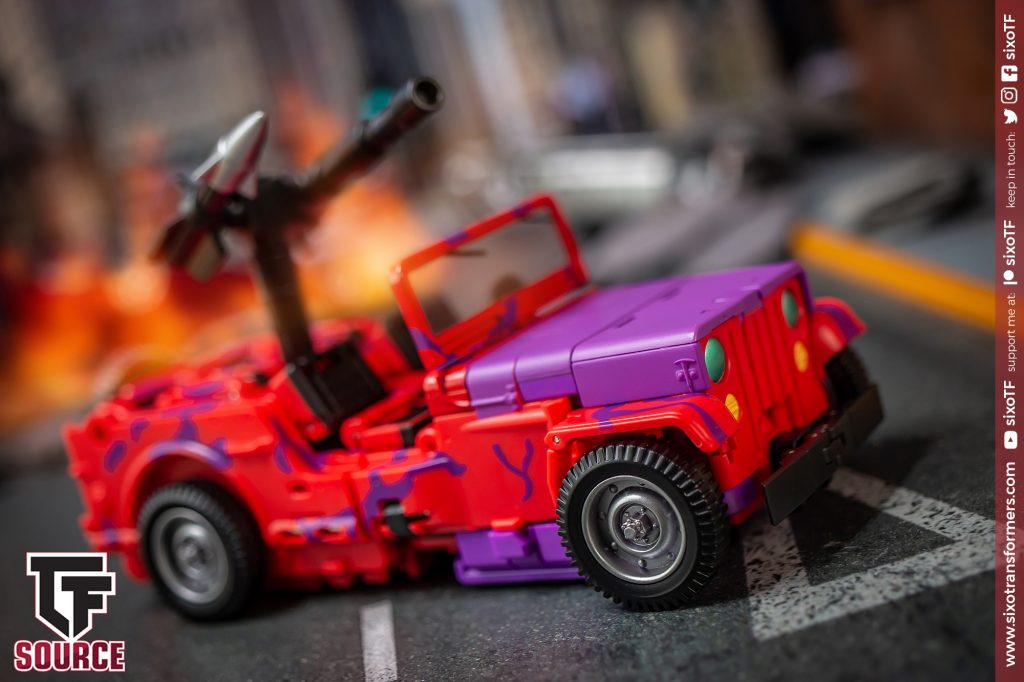 This brings us to the new and extra colourful Fraudo, seen here in eye-searing orange and a ridiculous camouflage finish that makes him look as 1990s as a Backstreet Boys promo shoot. It’s quite the makeover and had all the potential for looking rather absurd, yet my real fear was that Ocular Max might not go far enough with it! I was nervous they would somehow fail to dial up the saturation enough to make this offering work. Not so. 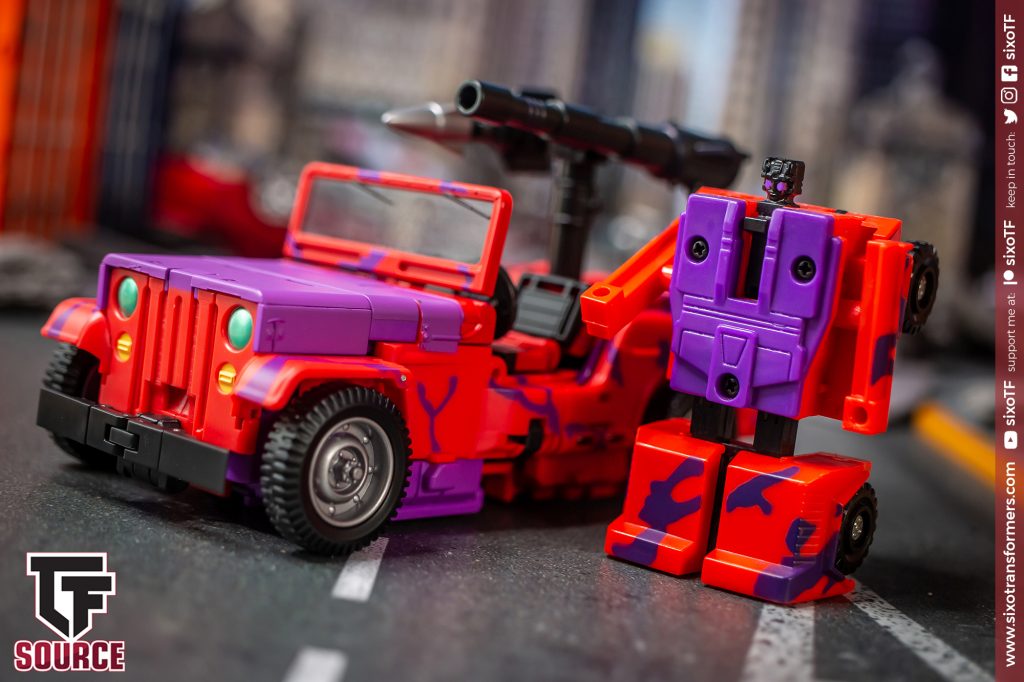 If anything, I’m astonished by the superb colour match to the original G2 Swindle toy, with orange and purple being a near-perfect approximation of what we saw back in the day. All too often, 3P stuff looks a little pale compared to the vintage specimens it seeks to imitate, but that’s not the case here, and I love it. 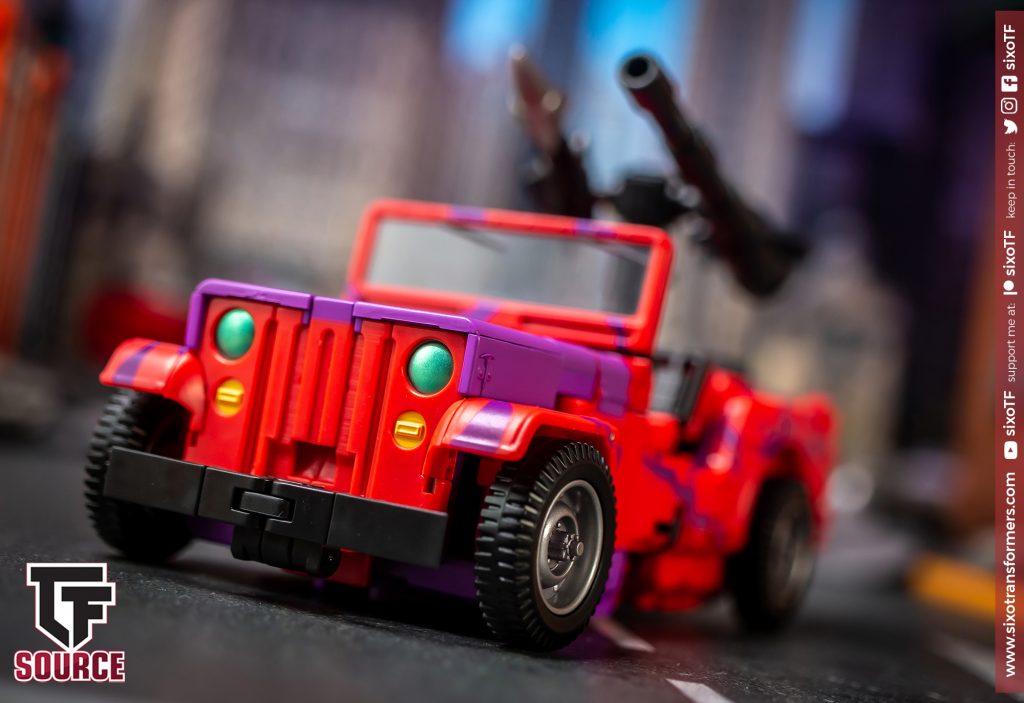 Whilst bold colours aren’t the only signature of the G2 line, it’s undoubtedly the most thought of amongst the fandom, so here’s hoping collectors won’t be disappointed with what they see here. We’re also treated to some popping green headlights and yellow touches, all of which look gorgeous. 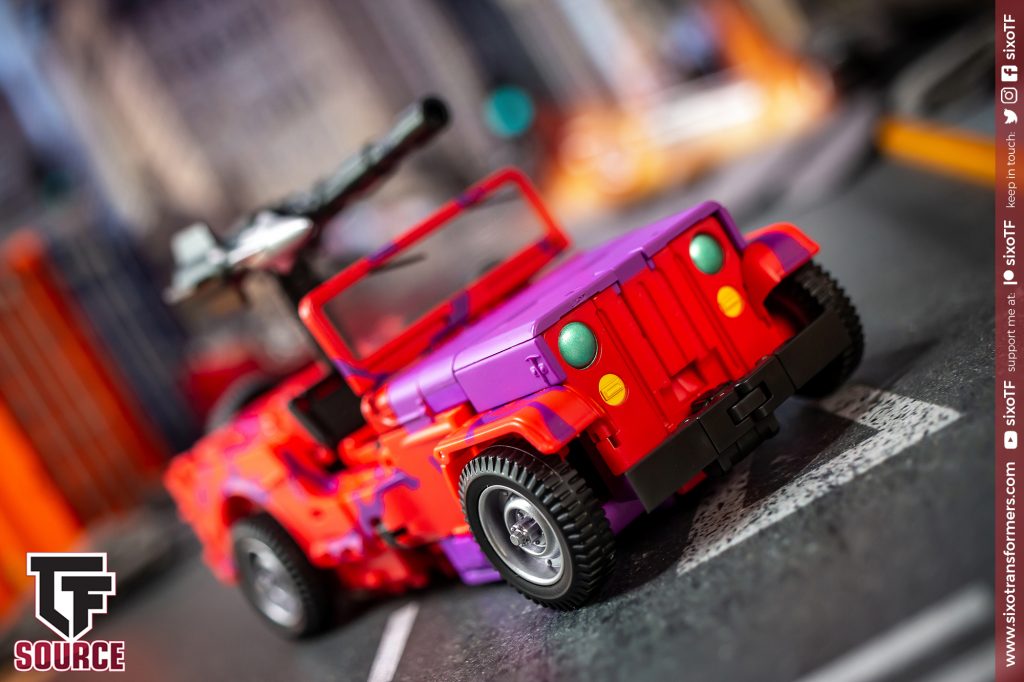 The vehicle mode remains as clean as ever, as you would expect, considering this is a straight-up repaint of the original Fraudo. Everything tabs together remarkably well and feels solid as a result, allowing all four wheels to rest stably on a flat surface and roll as they should. 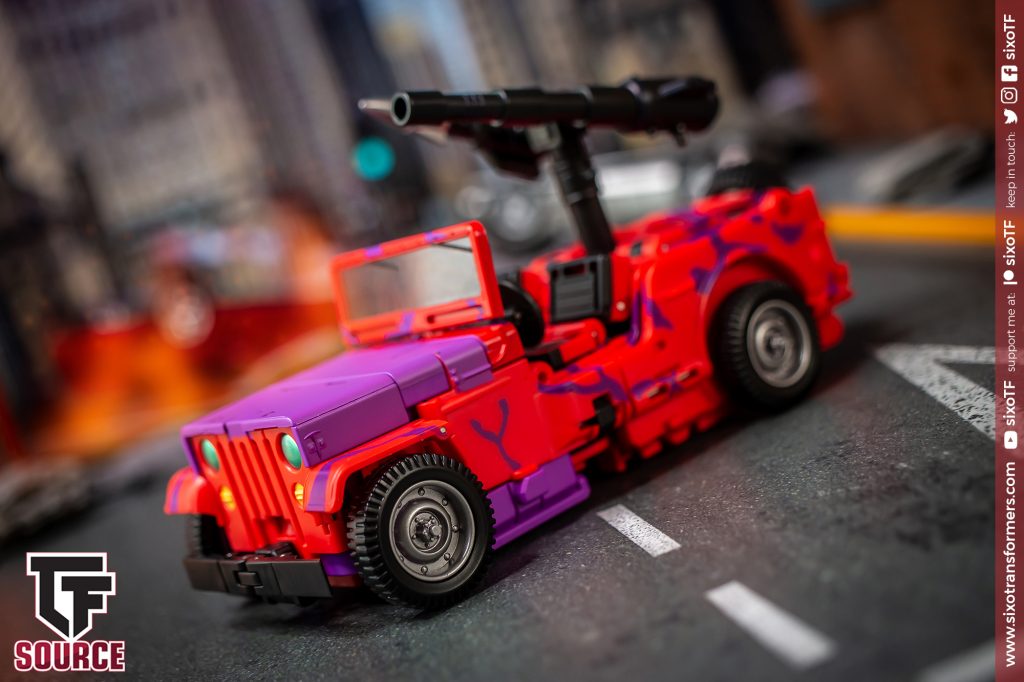 There’s a tiny bit of underslung kibble going on and a few noticeable panel seams here and there, but overall this remains the definitive take on Swindle’s alternate form in MP-style so far. I’m a big fan of the attention to detail on areas such as the seats and the steering wheel, whilst the spare tyre at the rear is the finishing touch. 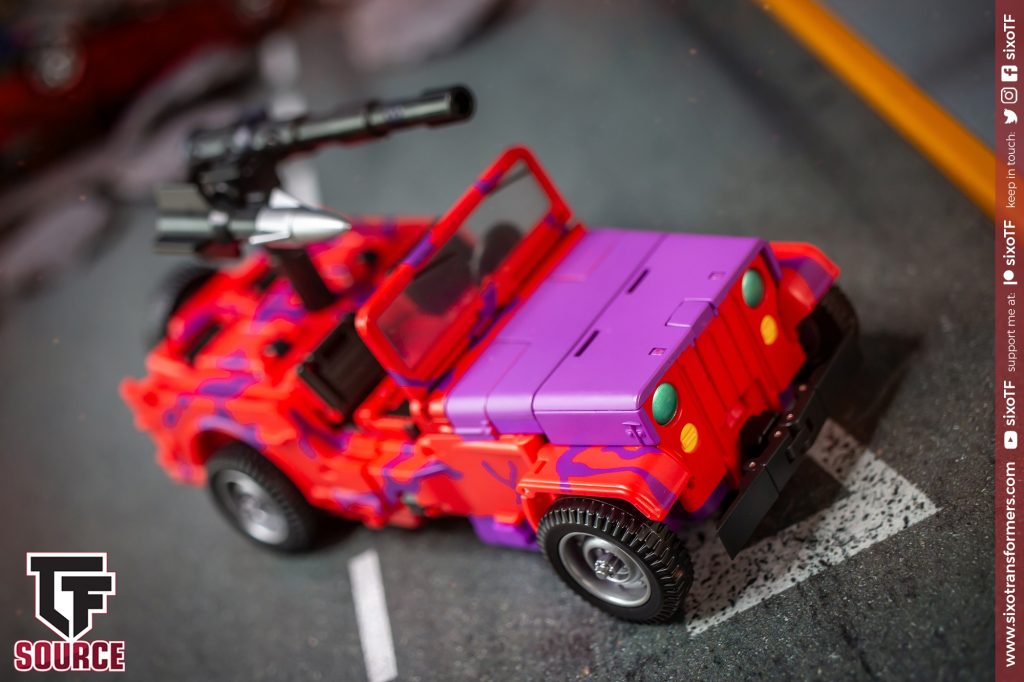 Then there’s the weapons assembly, which combines three accessory pieces and allows for a decent bit of play value. You can swivel and pose the weapons as you wish, allowing Fraudo to look suitably imposing as a combat-ready vehicle. 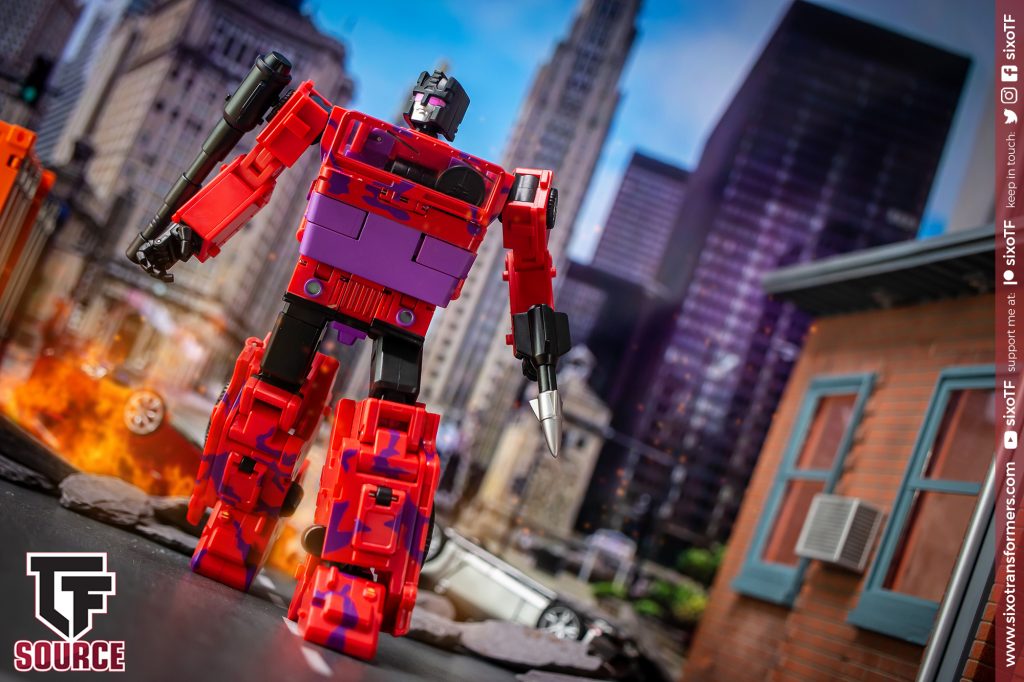 I’m a big fan of repainted toys, if only because it always gives another opportunity to appreciate a design that’s exceptionally well done, so I was intrigued to see what I would make of converting this new Fraudo between modes. Needless to say, it remains as clever as ever. 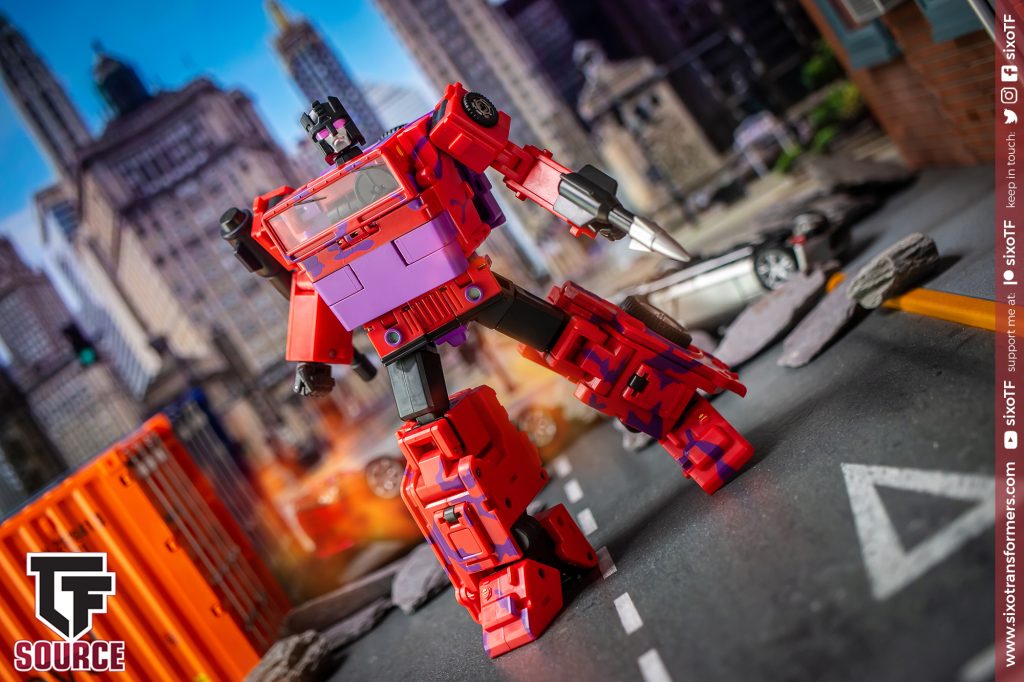 The main area of complexity is the upper body, which I must admit I still have to puzzle over, considering that some of the elements go a different way if you’re trying to make it to his combined leg form. Still, I adore how the whole thing essentially splits apart to be reassembled, mainly because it all glides together with the kind of grace and precision that some third-party companies still struggle to attain. 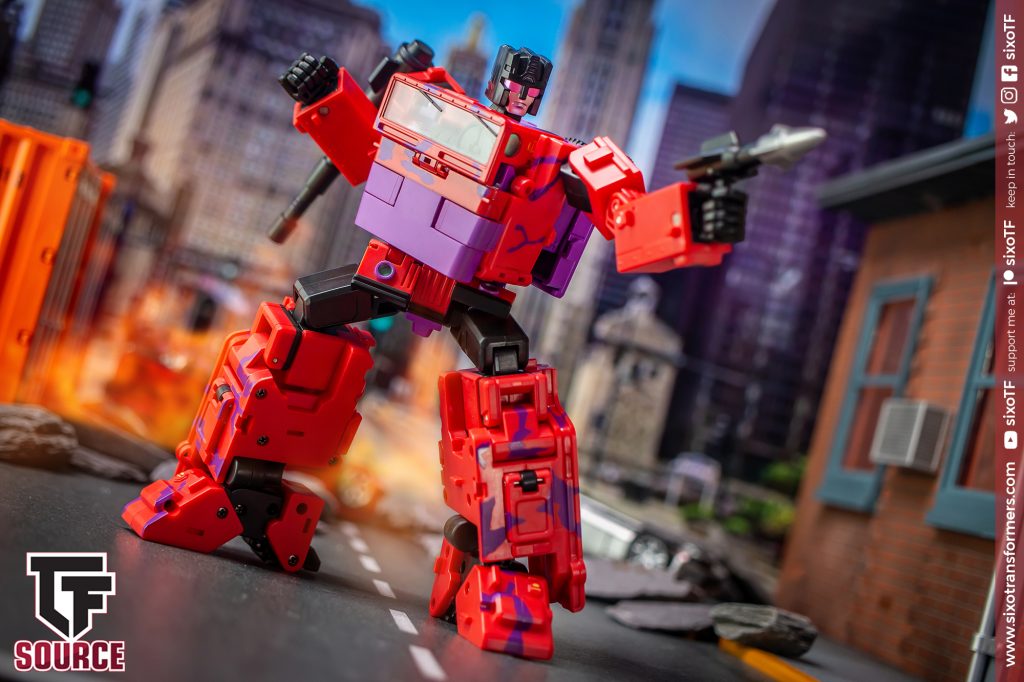 Seriously, I transformed both this and another current review effort in the same evening, and to say it was night and day in terms of how enjoyable the experience was is an understatement. True, I knew what to expect from the original Fraudo in this case, but that doesn’t take away that everything works precisely as it should on Ocular Max’s effort, showing that even complexity can be fun when it’s done right. 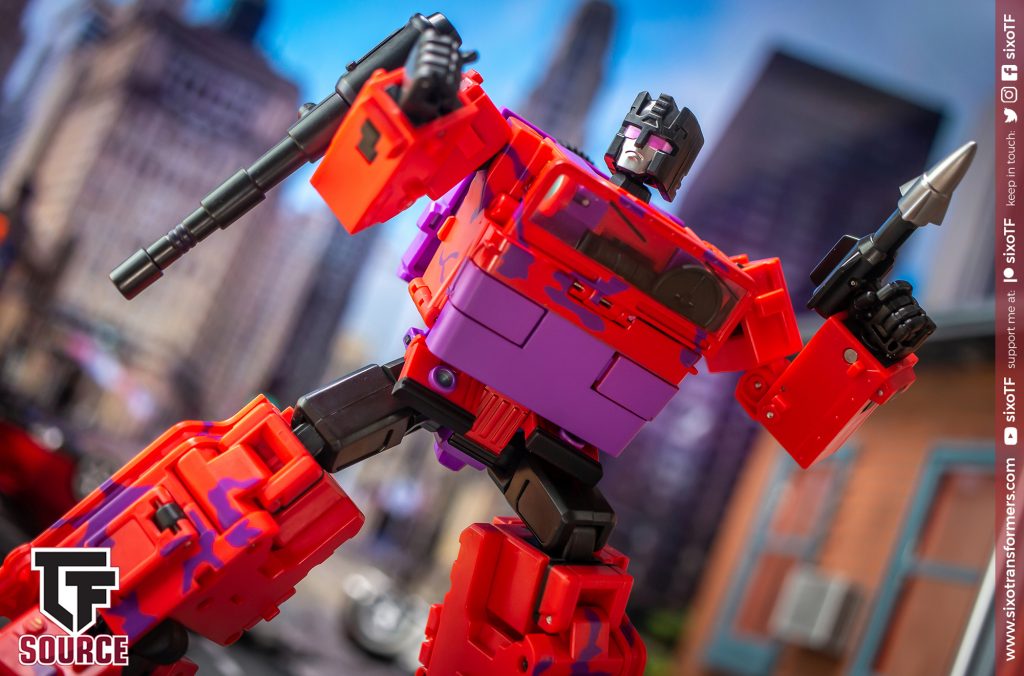 As with the vehicle mode, everything tabs together brilliantly, leaving you with a very tidy robot form indeed. Oh, and one that is simply chock full of personality! 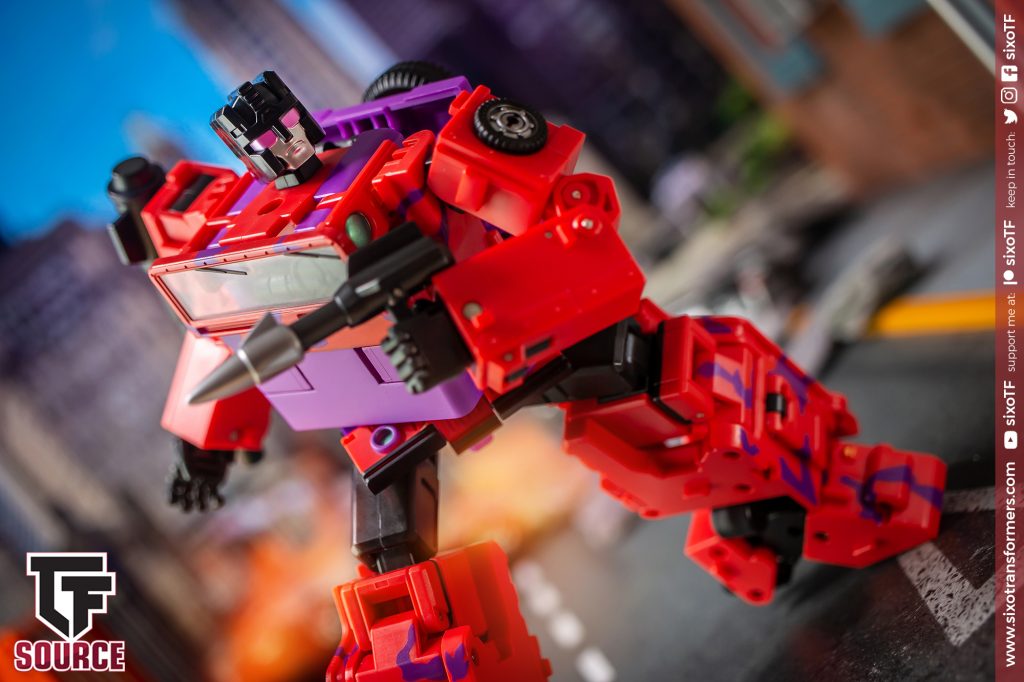 The character of Swindle is arguably one of the more memorable Decepticons from the original Transformers fiction. He surpasses most other combiner limbs of the era to forever stick in the minds of fans as the wheeler-dealer who would just as soon sell you for spare parts as he would look at you. Somehow, Ocular Max has managed to cram all that personality into this plastic representation, I swear. 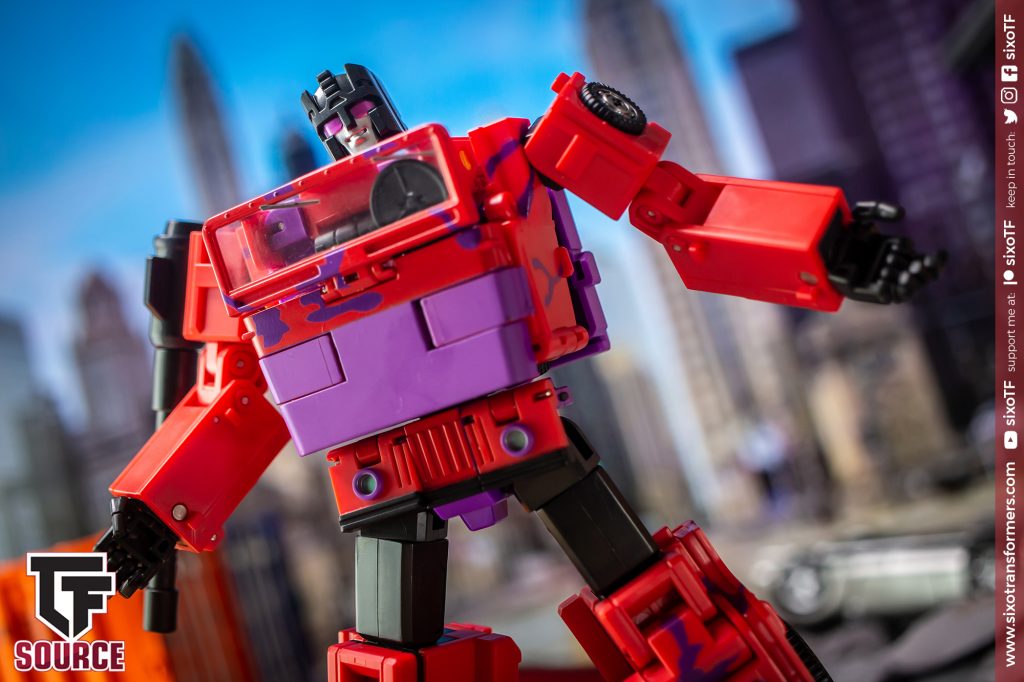 That’s especially true once you equip Fraudo with the alternate head included in the package, as it brings his devious, underhanded nature to life in one succinctly perfect smirk. There are a few 3PMP head sculpts that I would say can legitimately claim to rival some of their official counterparts, and this is most definitely one of them. 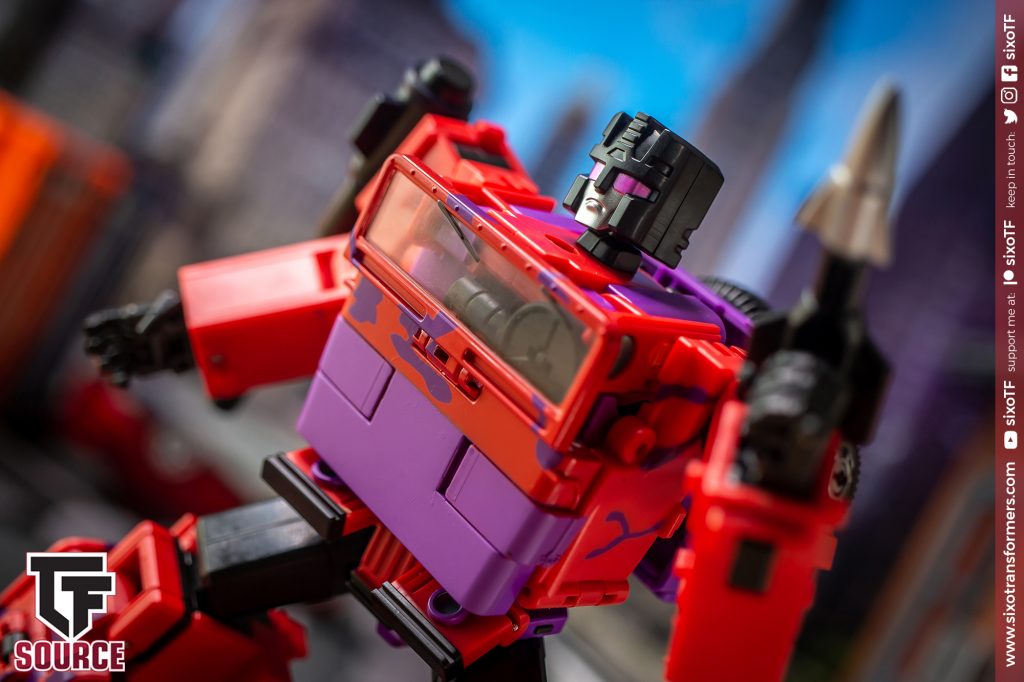 Not that the regular face is a slouch either, mind. It looks terrific with well-defined features and stunning purple eyes. Perhaps my only slight grumble here is the need for a screwdriver to switch between them, but otherwise, it’s all good stuff. 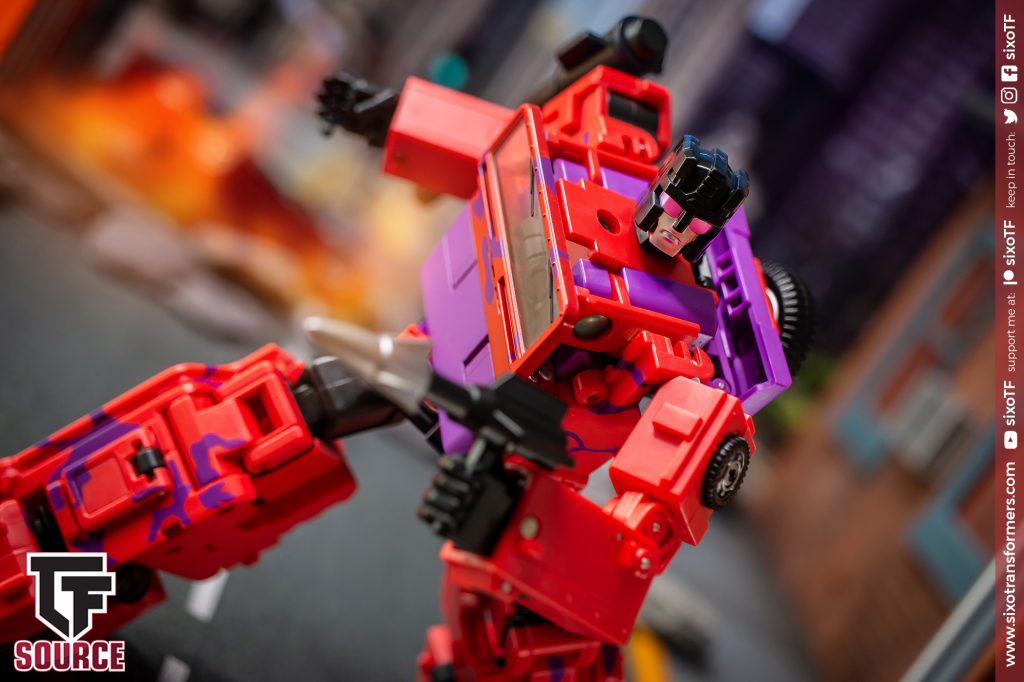 Elsewhere it’s more good news, with articulation aplenty and tight, solid joints. Ocular Max has seemingly nailed their output in this regard nowadays, putting some minor concerns of the past well and truly to bed. This is genuinely a flawless release in terms of quality. 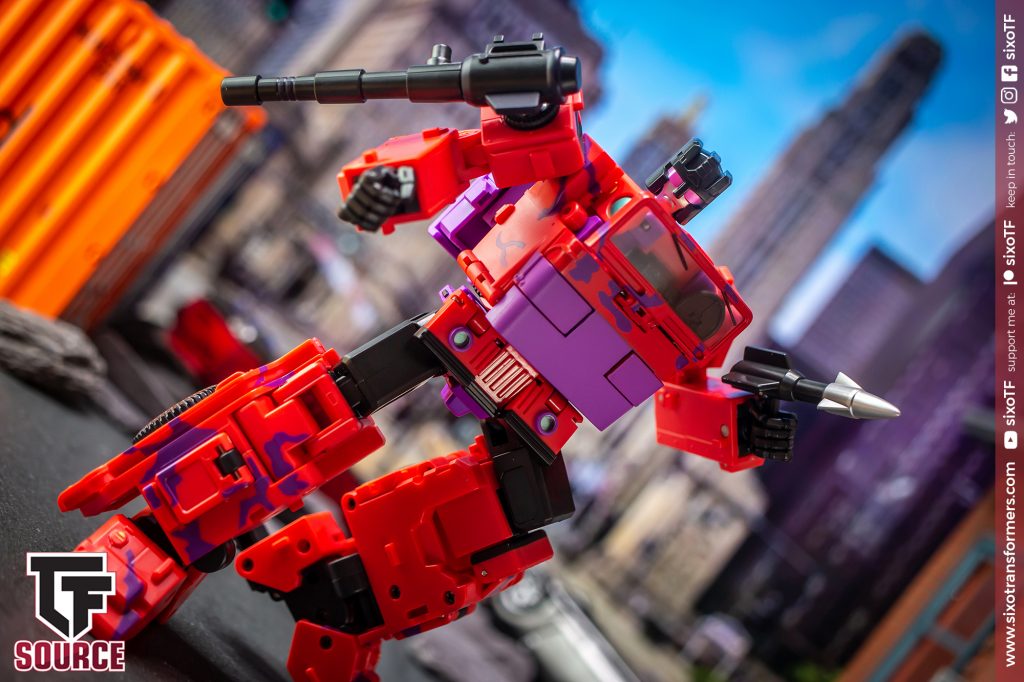 True, I’m never usually a fan of hip flaps, but here they work well enough and allow for a decent range of motion in that part of the legs. Some may find everything below the knees more limited, with the feet being slightly cumbersome to allow for the non-partsforming combined mode gimmick this set often wears as its main selling point and the ankle tilt a little lacking. 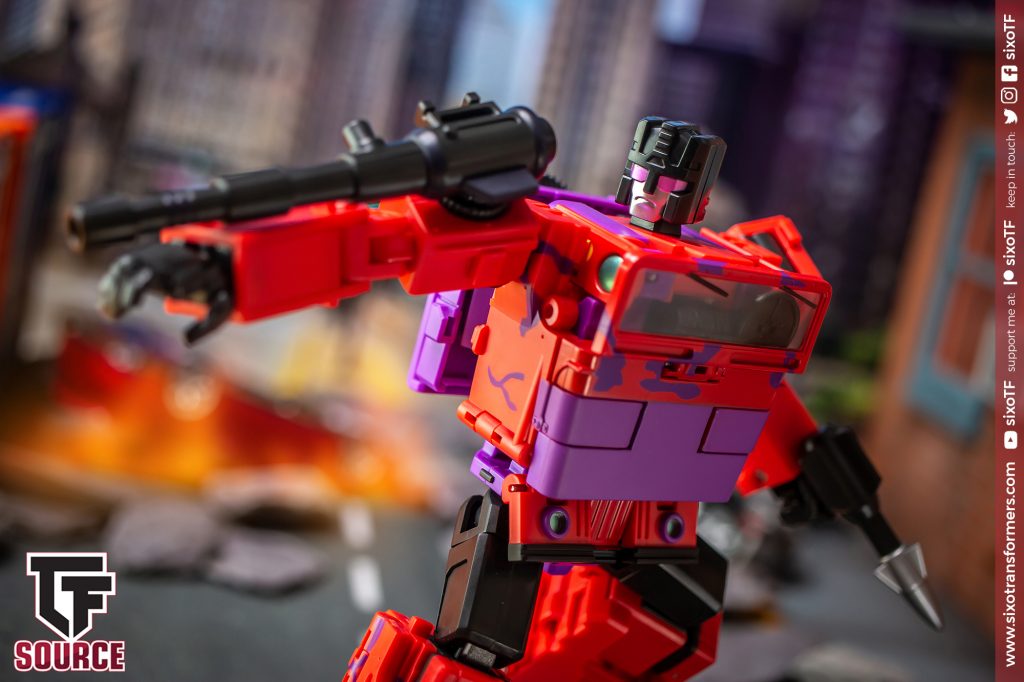 No matter, as the arms more than make up for it, allowing for many expressive poses, especially once you equip Fraudo with his weapons. Naturally, he can wear his signature arm cannon in pride of place like some wannabe Megatron, whilst the rocket launcher plugs firmly into his palm. 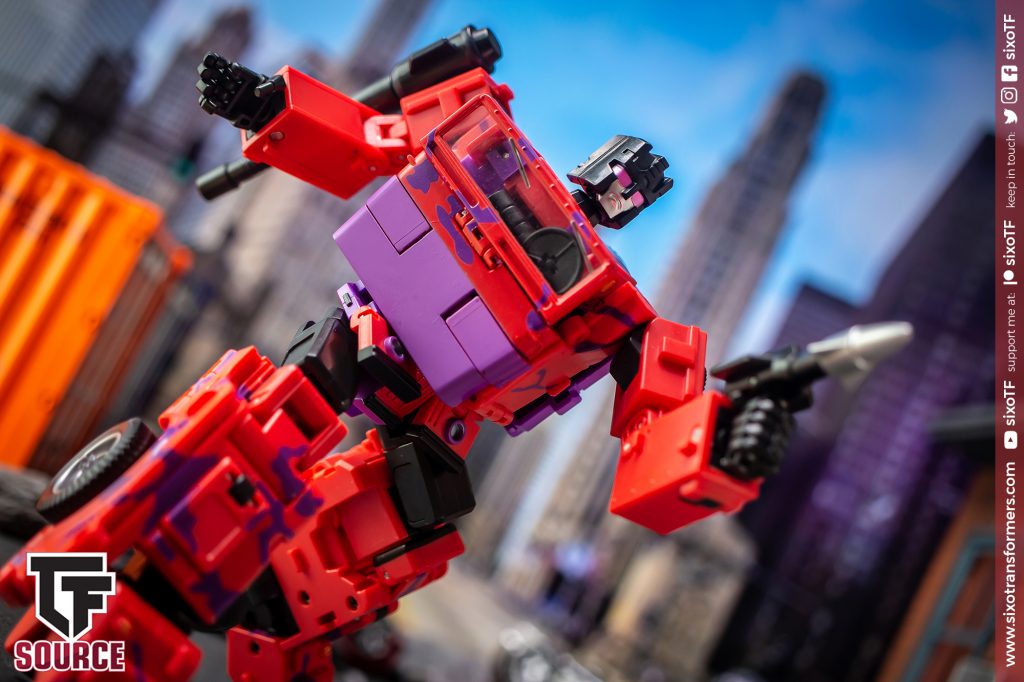 I find that the arm cannon has a slight hopping of popping out of place just a bit too easily, but who’s grumbling all that much when this lad is that much fun to pick up, play with and pose, eh? Overall, this is top-tier third-party fare and no mistake. 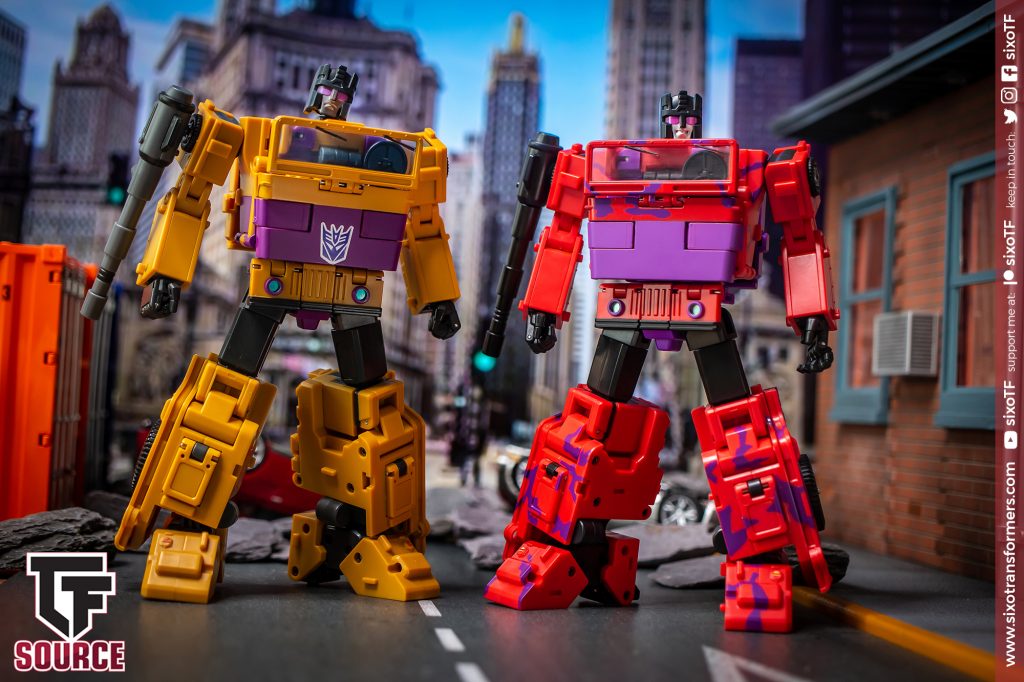 I love that it’s given me that chance to re-appreciate such an incredible design, too, especially with how dialled up the colour scheme is. Once you stand him next to the first release, you suddenly realise just how bonkers the G2 colour scheme really is. It makes his original mustard tones look almost conservative by comparison. 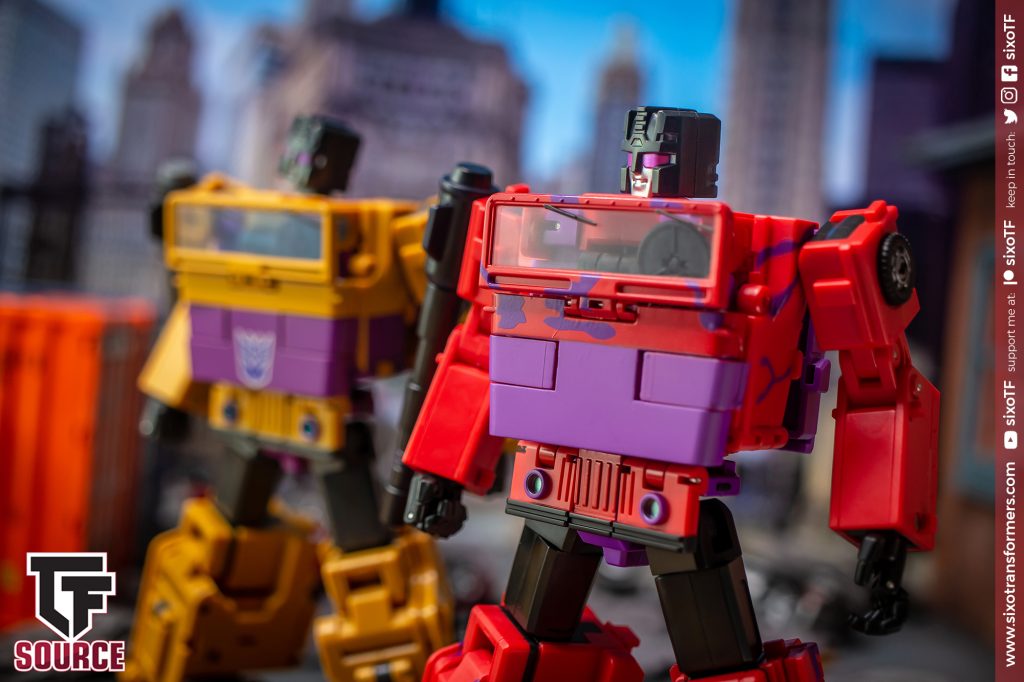 It leaves me thinking that the crowning glory here will surely be a Generation 2 Decepticon emblem plonked in pride of place on his chest, which will no doubt have as significant an impact as the G1 equivalent did on the first version. 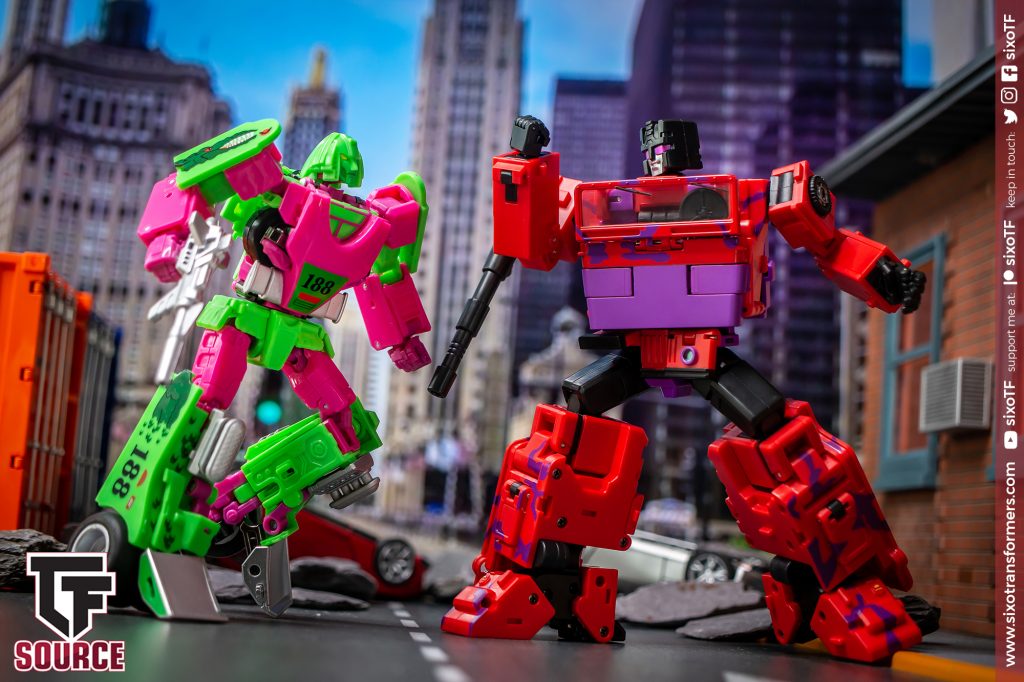 In the meantime, he takes a place with the rest of my G2-styled 3PMP collection, which has been steadily growing for several years. For someone whose formative years coincided with the original G2 line back in the day, it’s a dream come true to see such weird and wonderful toys being pumped out now. 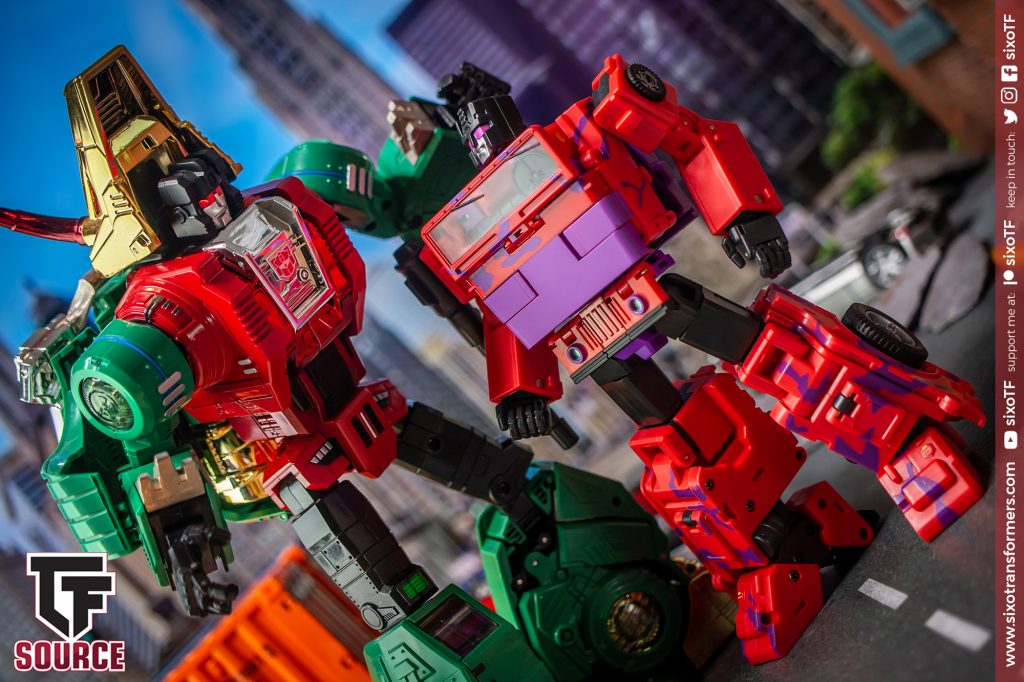 It also makes me tremendously excited for the rest of Ocular Max’s set, as if they continue to do such a great job on these colour schemes, it’s going to be one almighty payoff by the time it comes to combining them into their Big Man mode. Can’t wait. 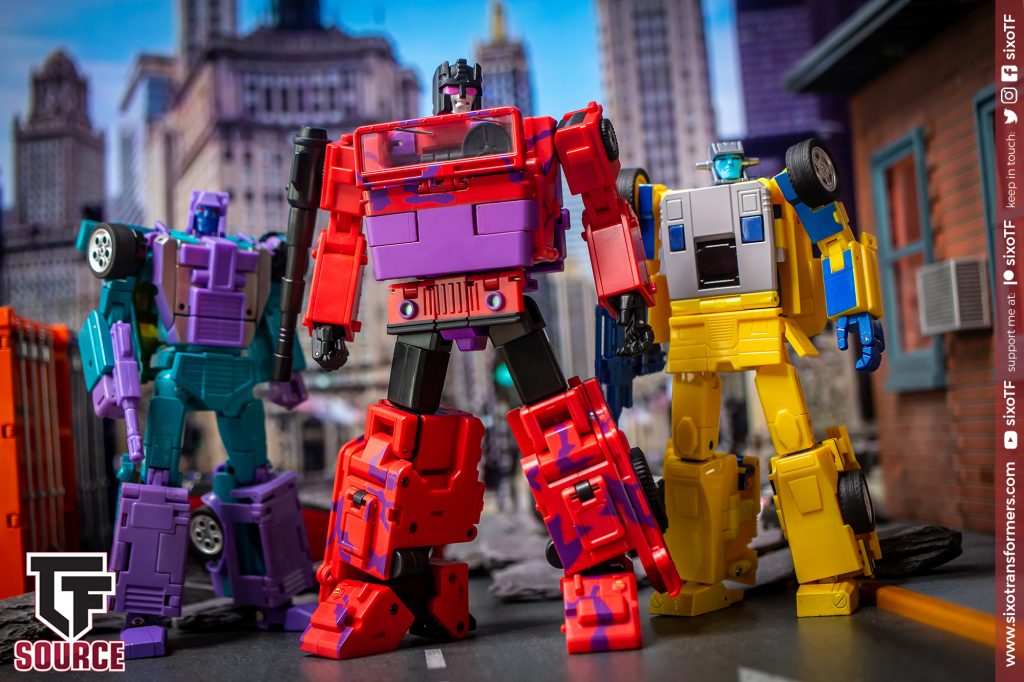 For now, I’m simply enjoying one of the best designs of last year brought back in such unapologetically OTT style. If I didn’t know better, I’d swear they did this one for me, personally.

WHAT’S HOT? Those COLOURS. Oh yeah, and the design itself is really good, too!

WHAT’S NOT? The lower half of the robot mode has its odd moments, mostly to allow for the combined mode transformation.