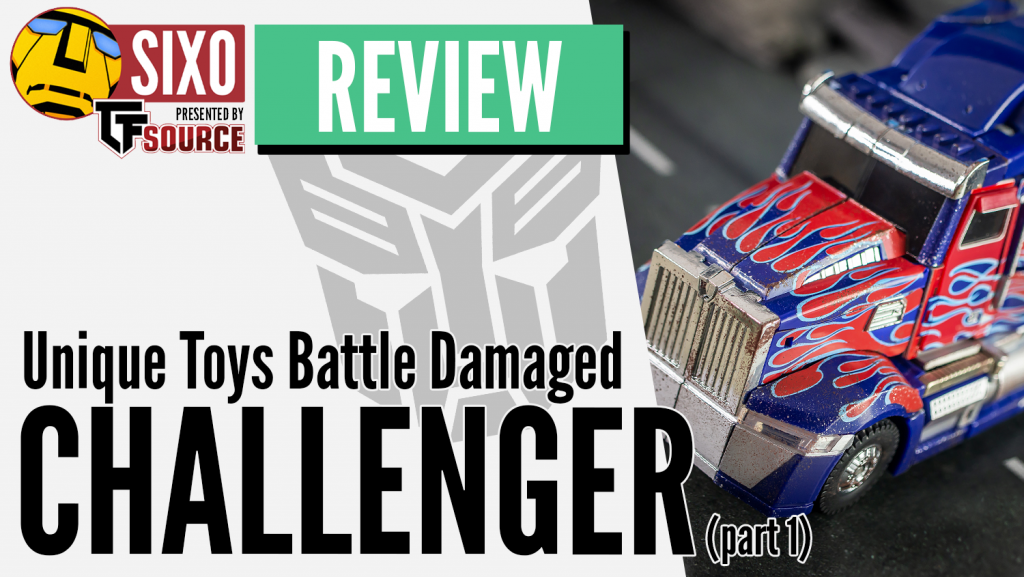 Funny story: I was convinced I had already reviewed this toy in its original form, but, as it turns out, I never have.

Alright, I didn’t say it was *hilarious*, but it is strange, as in many ways, the first release of Unique Toys Challenger kind of set the template for a lot of the third party Masterpiece-styled Bayformer figures we now know and love. Sure there had been attempts before, including from the same company, but Challenger seemed to be the breakthrough release that caught many people’s attention at the time. 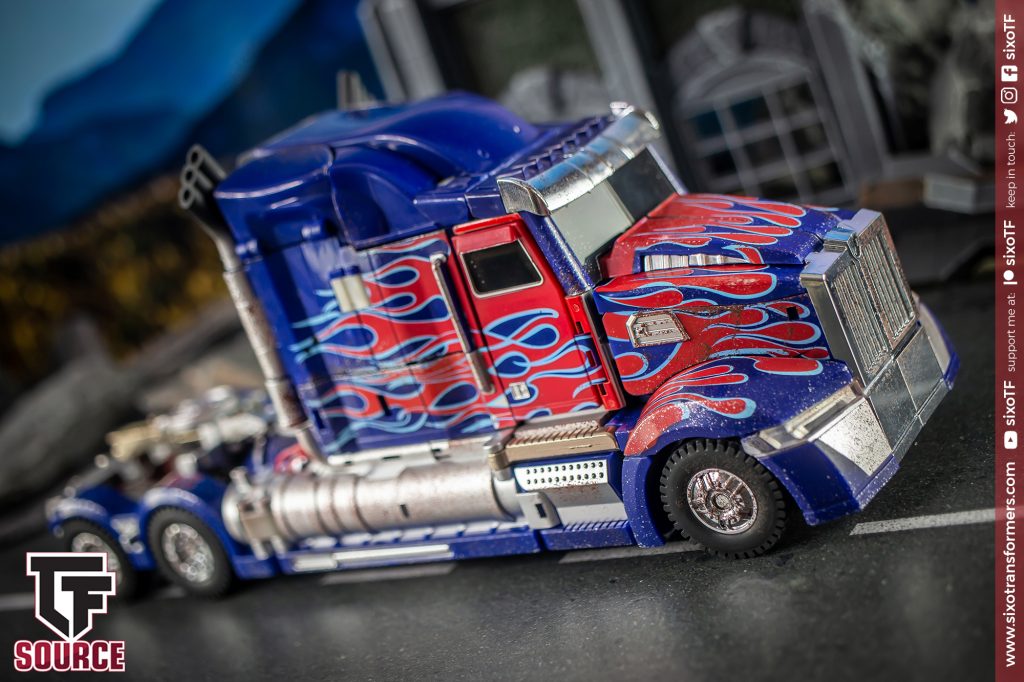 Since then, we’ve had all manner of unofficial products trying to replicate that success, to the point where we now have five (or at least it was at last count) different companies working on Dark of the Moon Megatron. Unique Toys themselves have also gone from strength to strength in this arena, with their recent new Nero design showing that they’re still the ones to beat, realistically speaking. 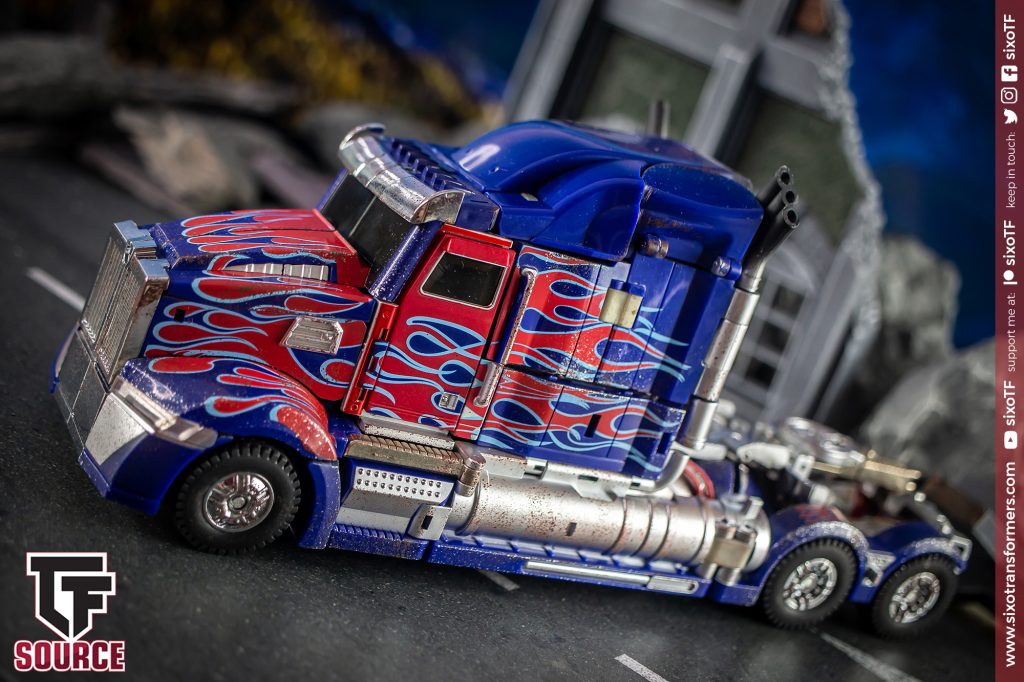 So with all that in mind, I was actually quite excited to return and appreciate Challenger all over again, especially with this new “battle damaged version” having just landed. Besides, as sleek as this design for Optimus Prime is, there’s something about a grungey, worn finish that suits the big-screen robodad. 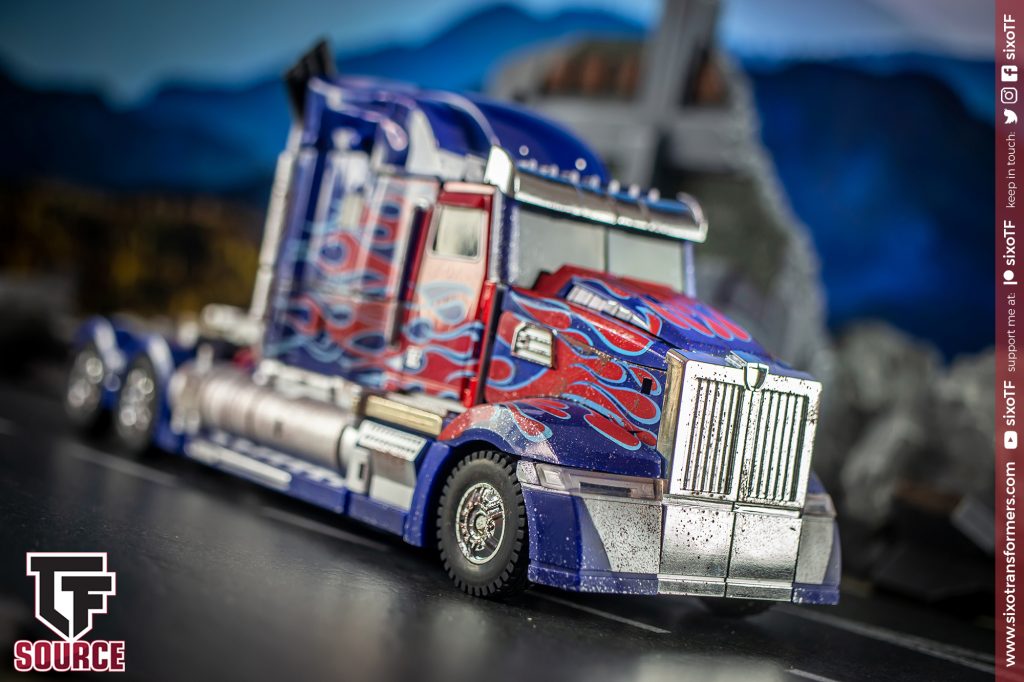 As with many UT products, Challenger arrives in robot mode, but we’d be remiss if we didn’t give his truck form the correct time and attention to begin with. It is, after all, a very stylish thing to behold, and especially so now with the new weathered look rather bizarrely adding a more premium feel to the proceedings. 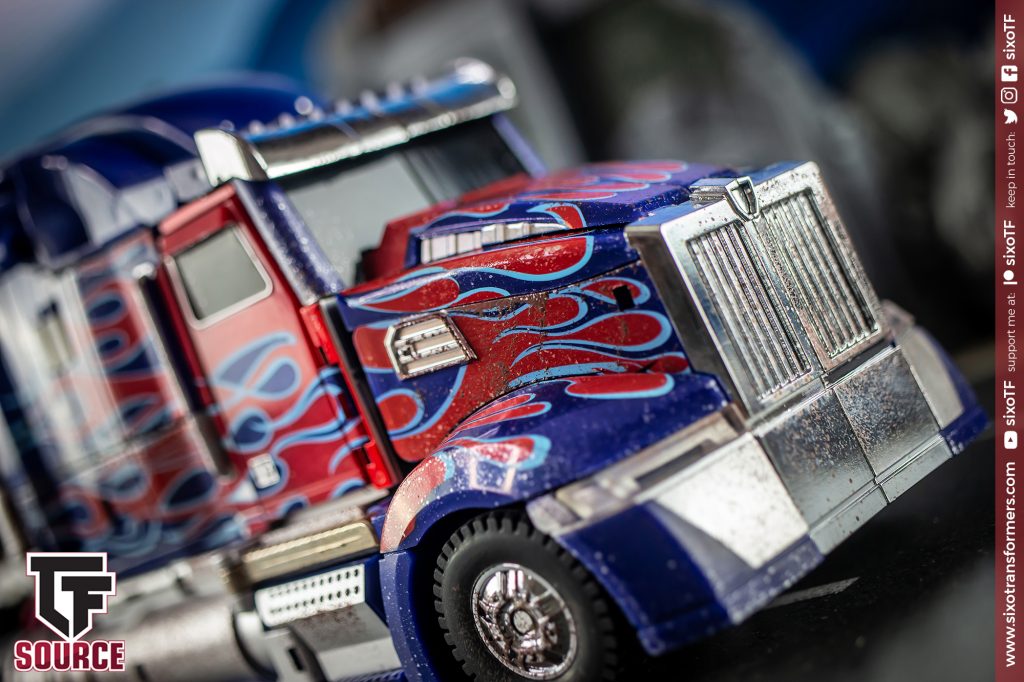 I say that cautiously, but there is something about all the grit and grime that looks rather spectacular, even up close, and somehow elevates the look of this toy quite a bit over the clean original version, in my opinion. I’m sure it won’t be to everyone’s tastes, but it’s well done, nonetheless (and even does a cracking job at hiding any possible dust in a photoshoot – major bonus!). 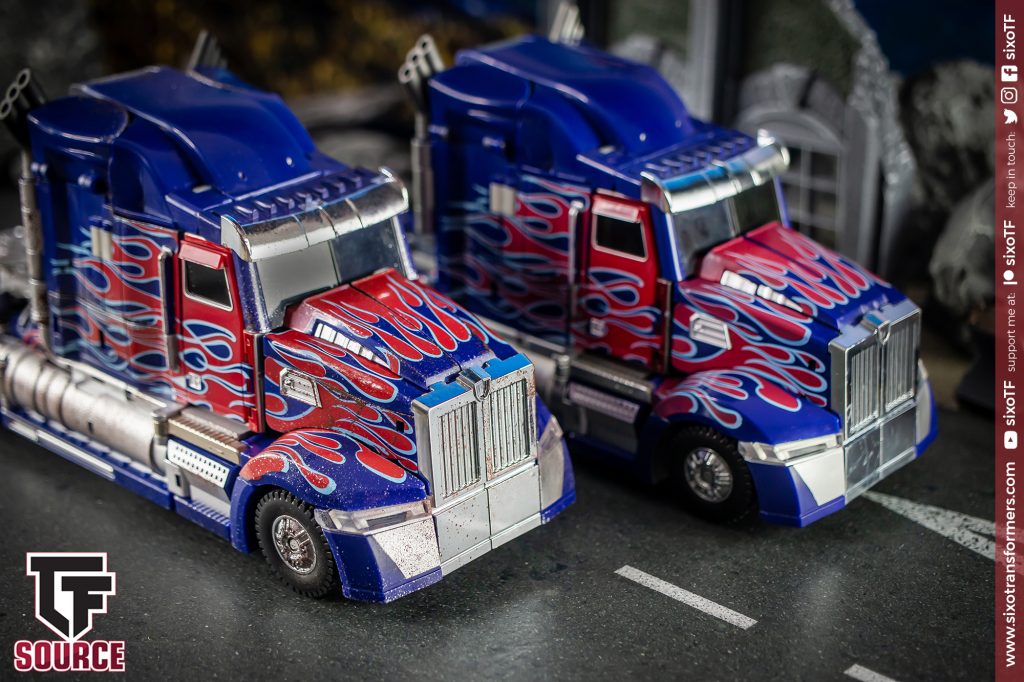 Don’t get me wrong, the original Challenger looked great as it was, and if you already have that first 2018 release, then there isn’t necessarily enough of a difference between these two to really say that the battle damaged version is worth getting too. However, if you’re new to the proceedings, I think this would be the one I’d opt for, given the choice. 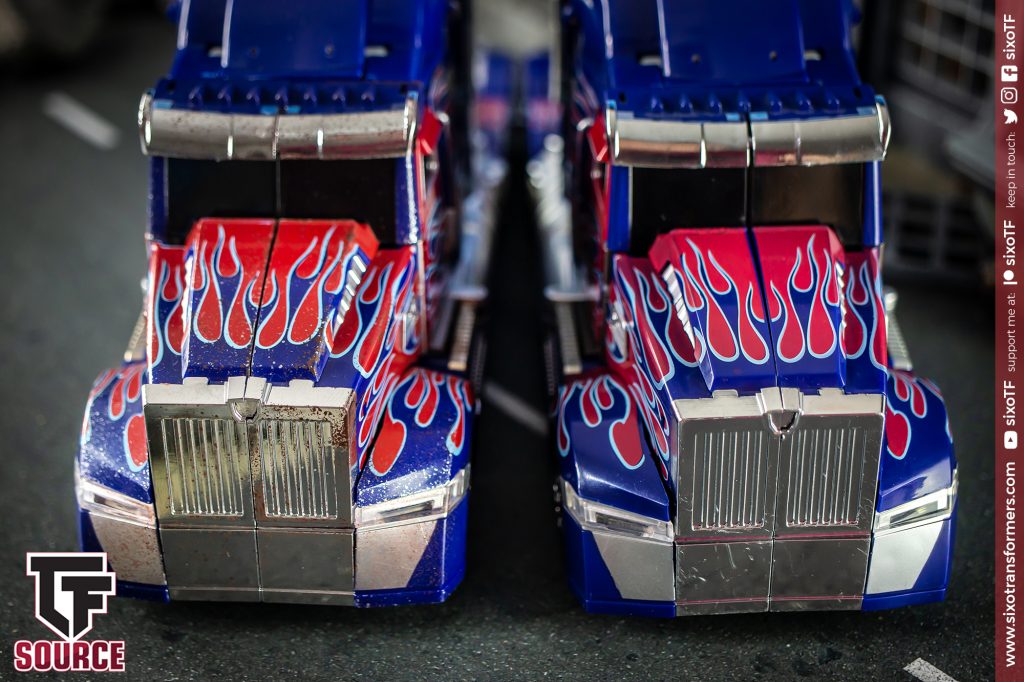 In my case, it’s probably fair to clarify that my first Challenger has a few scuffs and scrapes (and at least one obvious break, but that’s more of a thing in robot mode and was partly a result of user error!). Perhaps ironically, those blemishes would be a lot less noticeable when mingled in with the weathered finish on the new version, but still, the purposefully blemished look does make a very subtle albeit worthwhile difference. 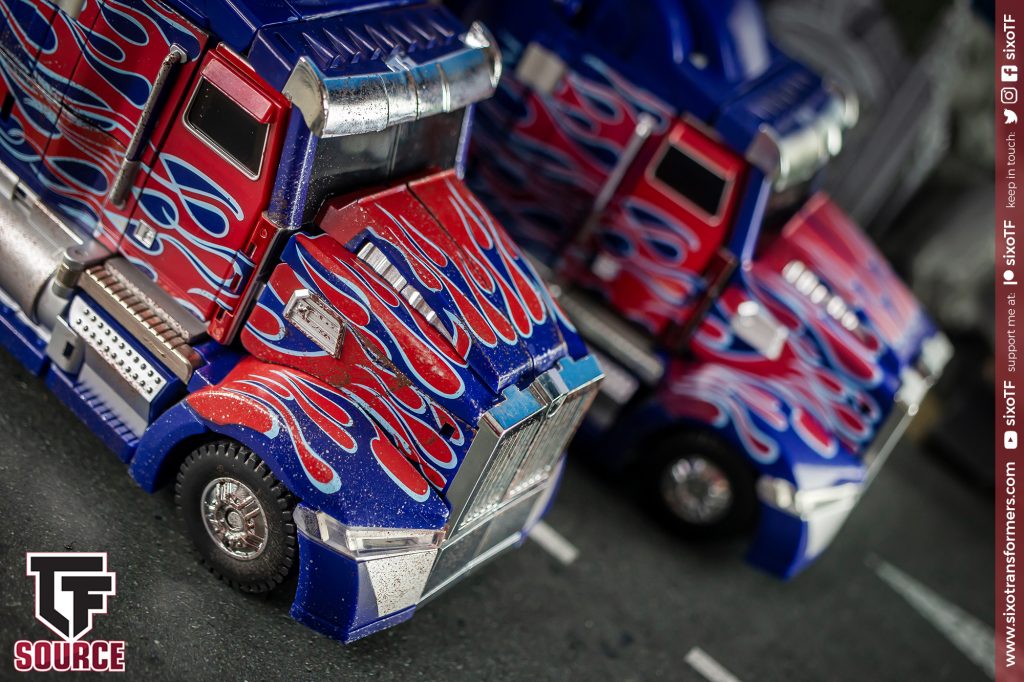 There are also a few colour changes too, especially as the blue and red are a touch brighter on the new release. It’s not something you would spot until you have them both side-by-side, but it’s worth mentioning nonetheless. 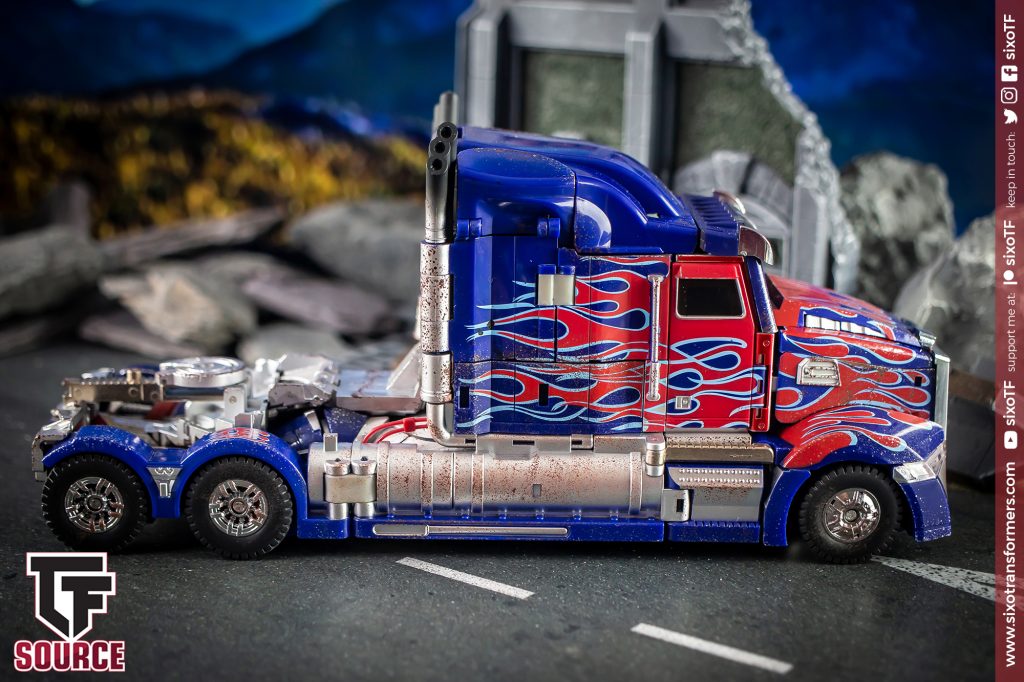 Whichever way you choose to roll, though, there’s little doubt this is a pretty sexy vehicle form all told, and surprisingly clean too. Considering everything it needs to go through to get to a remarkably kibble-free robot form, there are precious little signs of this thing even being able to transform at this stage. Even the rear truck bed looks tidy, something that many Optimus Prime designs stumble on. 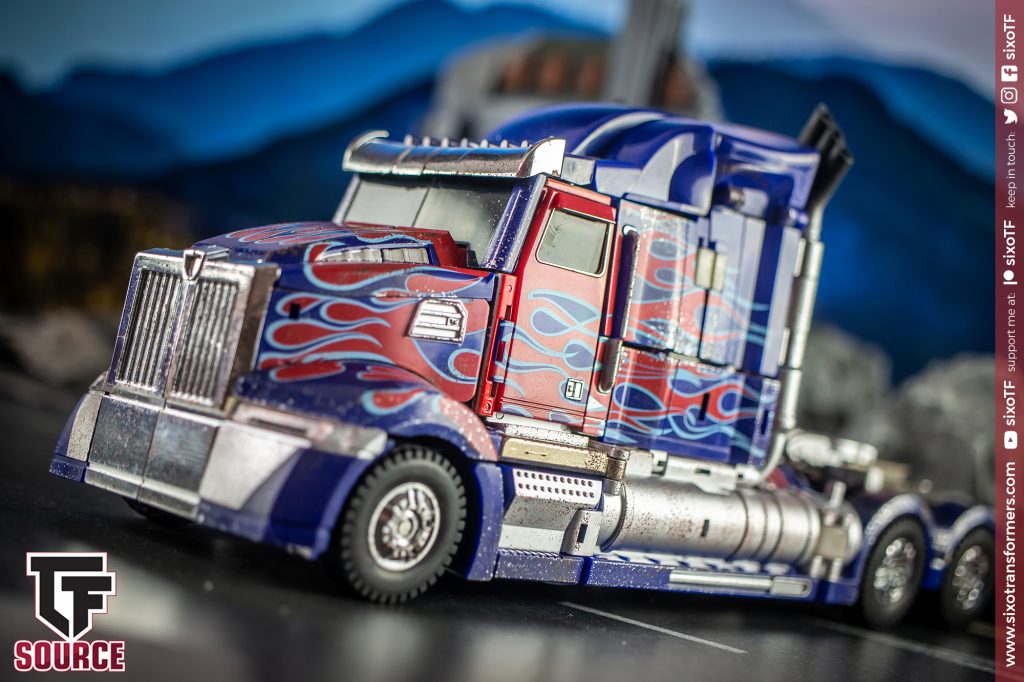 The front of the truck looks equally good, with most of the panels presenting fairly seamlessly overall. There’s a smoothness that really aids this toy and makes it feel cohesive, as just about everything clips together solidly and stably too. The only bit I struggled with even a smidge was the bottom panels just behind the doors, though it is possible to get them flush with a bit of fiddling. 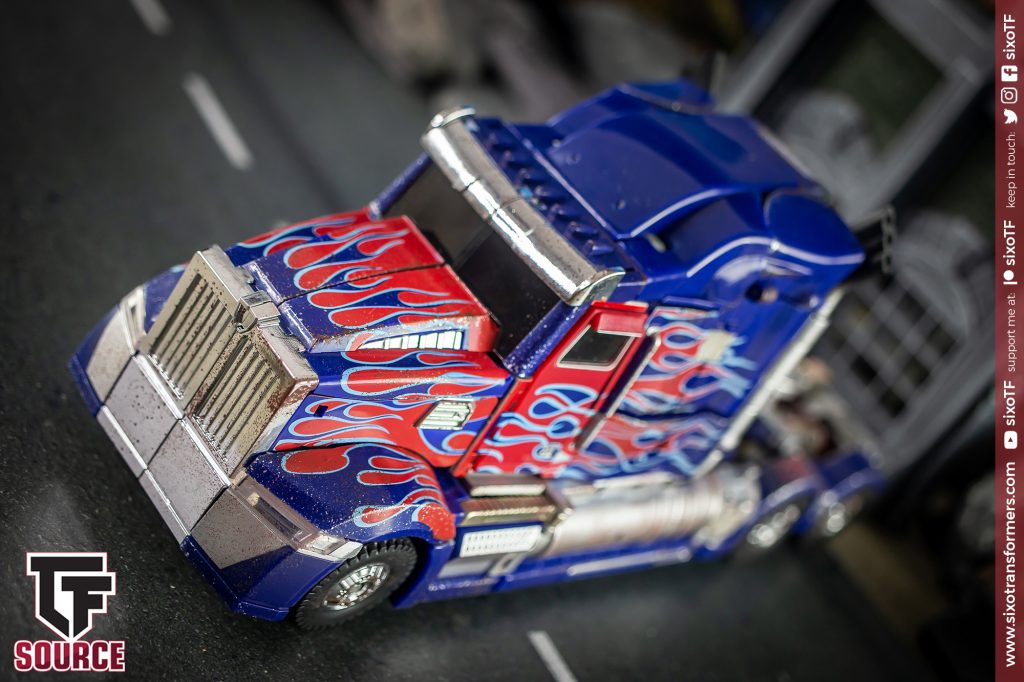 Meanwhile, the bonnet and roof of this mode are entirely spot on, to the point where they put the official MPM-4 take on the first big-screen Optimus Prime design to shame. I’ve enjoyed the Masterpiece Movie line, but there’s little doubt this unofficial effort goes toe-to-toe with a lot of it in terms of design and even surpasses some of it on the grounds of presentation and finish. 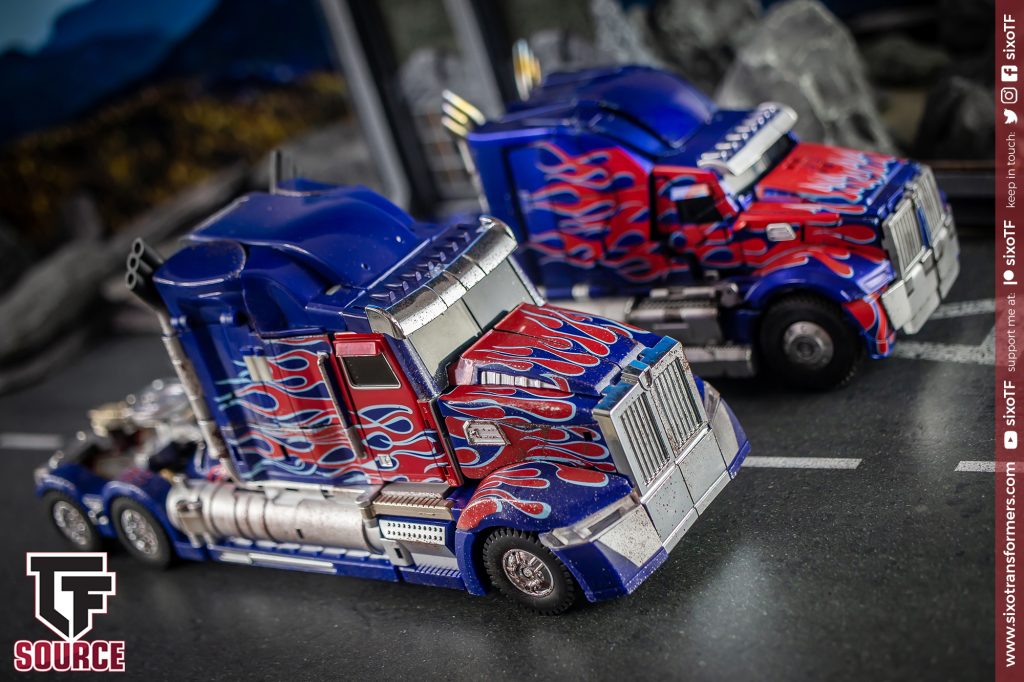 It’s not the only competition out there, mind, as whilst Challenger may have paved the way four years ago, now the playing field has become a lot more populated. Step forward Toyworld with their Knight Orion attempt at this exact version of the character, giving collectors a choice as to which figure they’d rather see on their shelf. 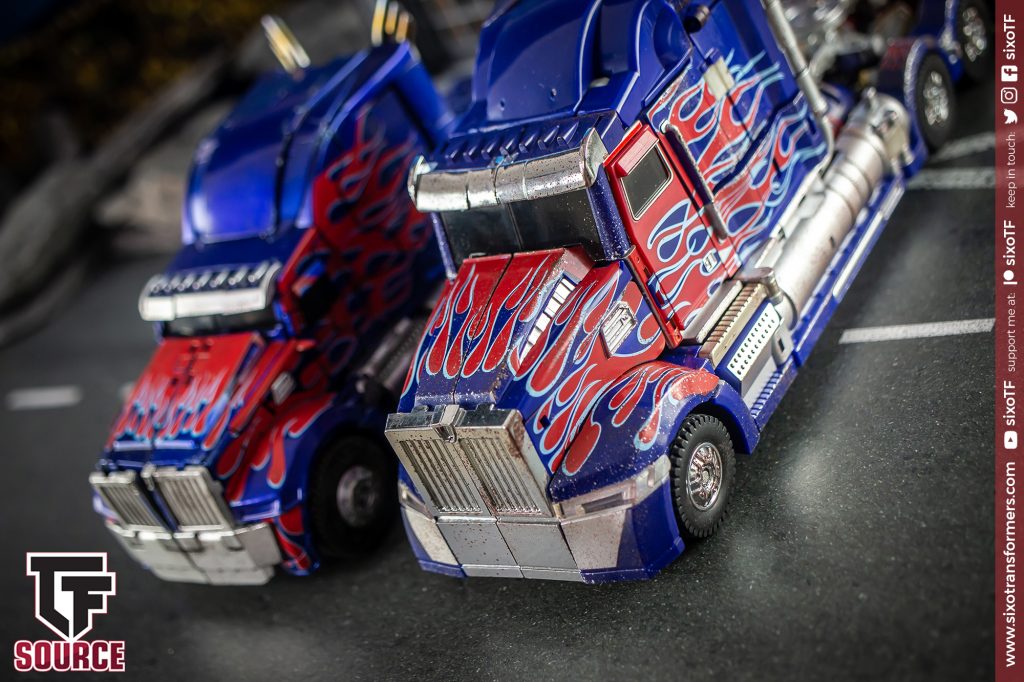 At first glance, the Toyworld release makes a compelling case, too, presenting with a very similar weathered finish to Unique Toys’ re-release, to the point where you could easily confuse the two of them at a moment’s notice. The most apparent visual difference is Knight Orion’s more squat proportions versus Challenger’s streamlined, leaner look. 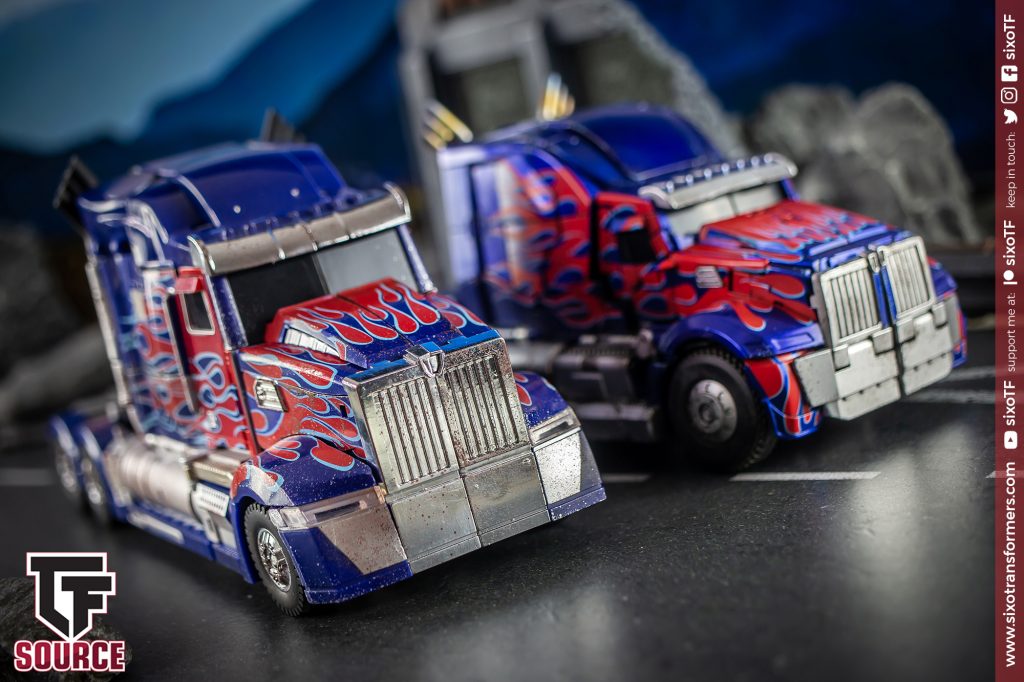 I have to admit the curvier style of Toyworld’s effort looks more indicative of the vehicle seen on screen, to my eye. However, Challenger is bizarrely more accurate to other versions of the 2014 Western Star 5700 XE truck on which Optimus was modelled. In reality, I think the ideal solution is probably somewhere between these two, so it really comes down to whichever catches your eye more. 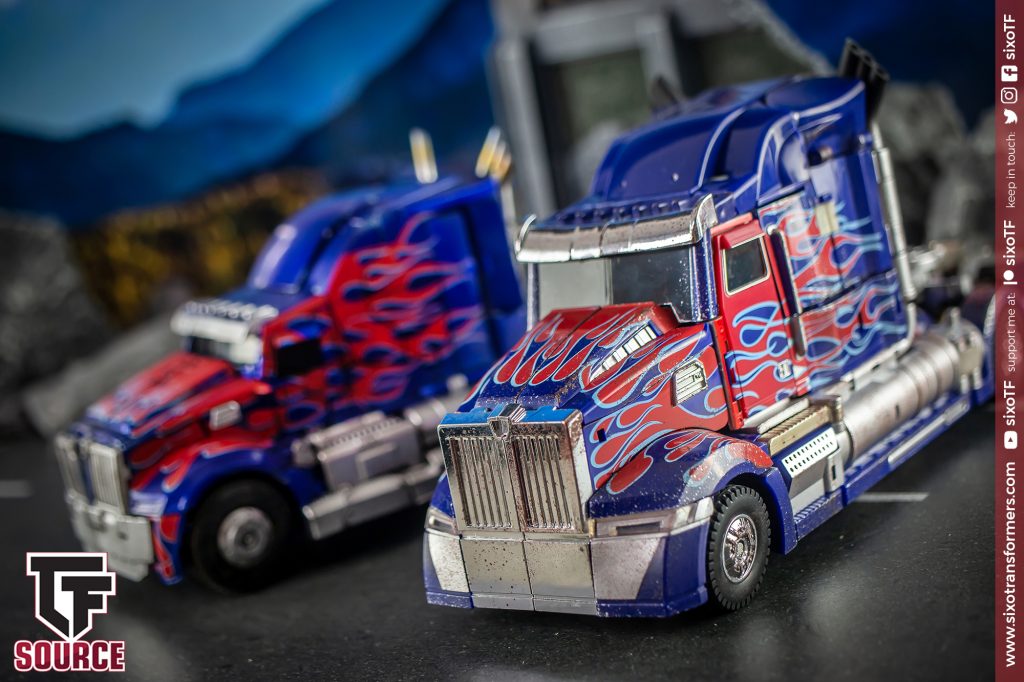 Still, there’s little doubt for me that Challenger presents better in terms of fit and finish, with the Toyworld figure being the real challenge (again, rather ironically) when it comes to keeping it tabbed together properly and sitting cohesively in truck mode. It looks nice, but if you’ve ever heard people talk about how frustrating their Freedom Leader figure can be, that might clue you into the experience you can expect with this release. 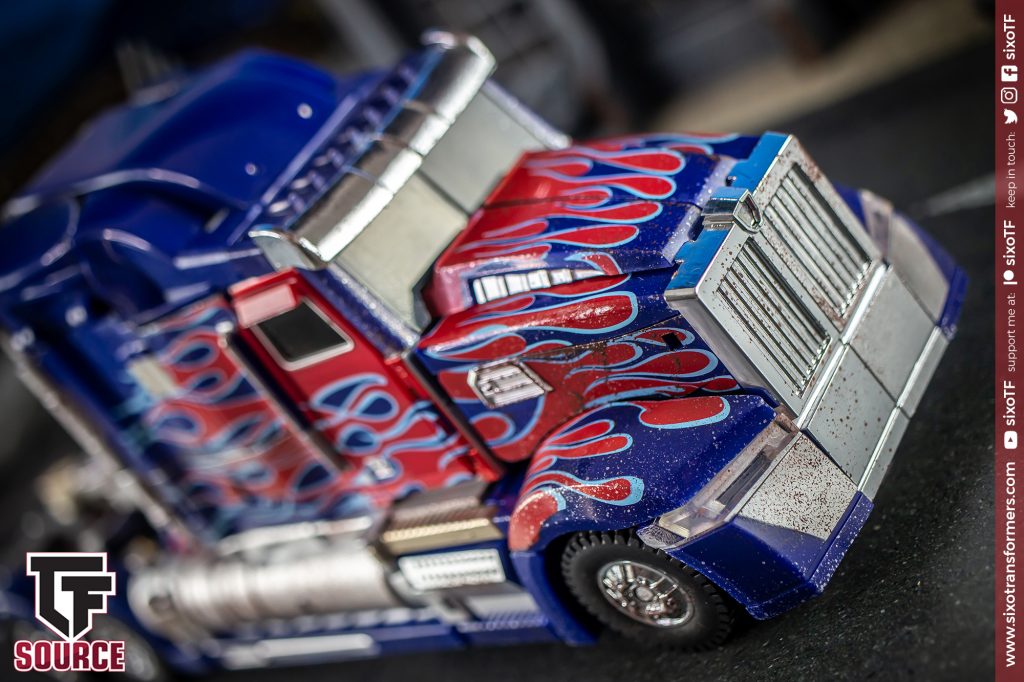 By comparison, Unique Toys’ design feels like a polished, sturdy effort, easily surpassing its competitor when it comes to ease of handling and transformation, too! We’ll look at their respective robot modes another time, but if you like converting your toys between modes without too much frustration, it’s not hard to see which of them understands the assignment better. 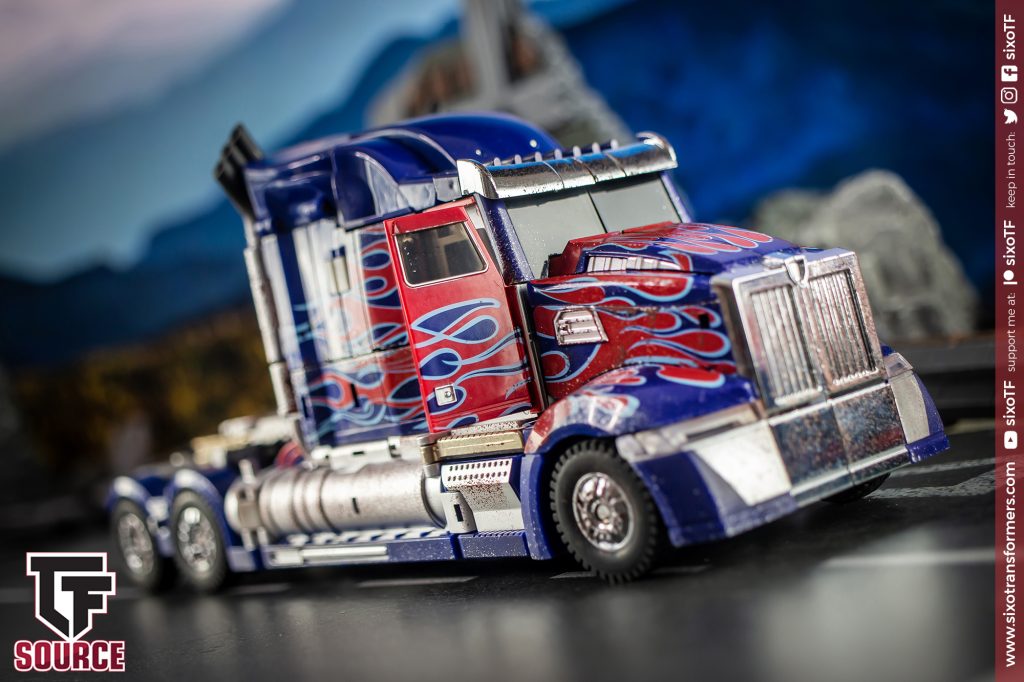 There is a bit of interactivity on Challenger, too, most notably a set of opening doors on the sides of the cab. The interior isn’t really worth much at all, but it’s a neat touch, all the same. 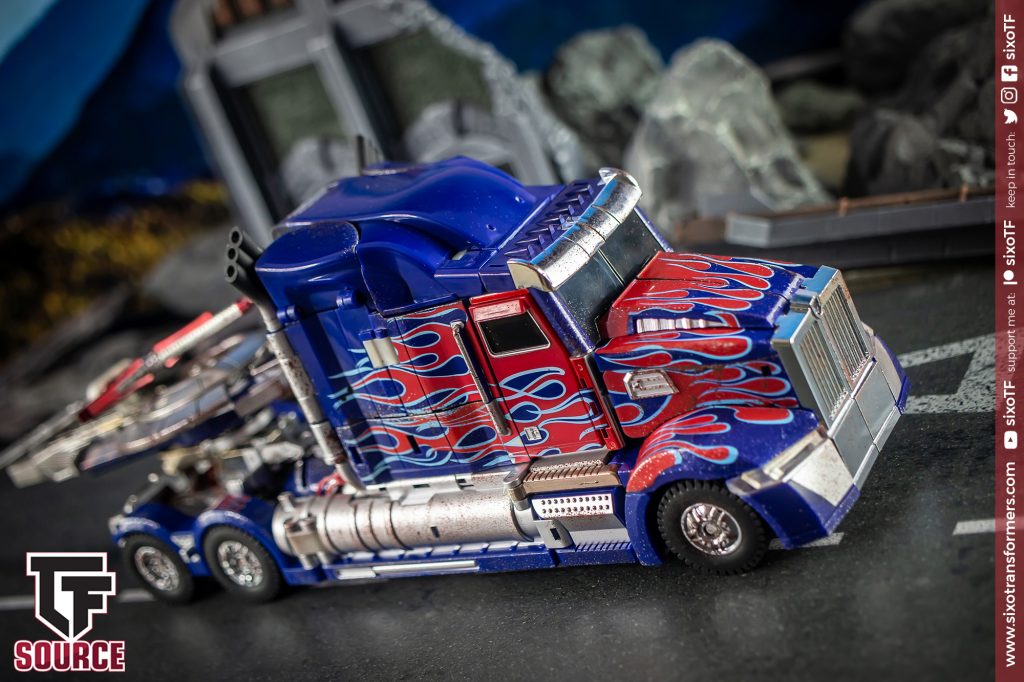 You can then add some of his accessories to the rear truck bed in a spot of highly dubious weapons storage. It doesn’t really work, especially as the weight of the combined sword and shield makes them sag down a bit, but still, it’s an option. 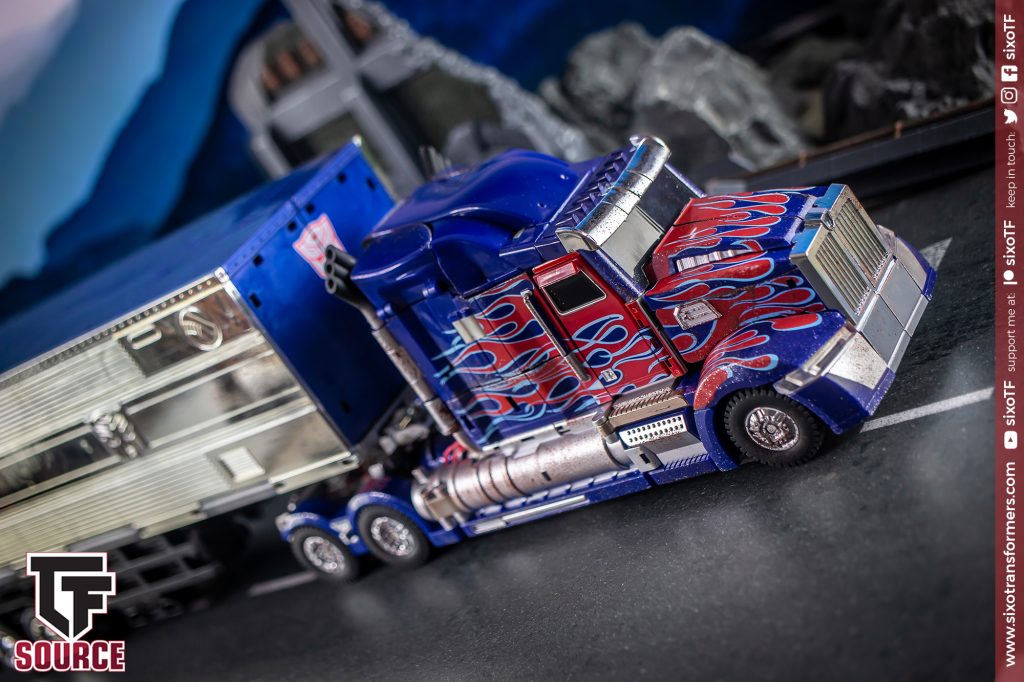 Then I’d be remiss if I didn’t mention how wonderful this figure looks when coupled with the repainted Masterpiece MP-10 trailer released with the Platinum Edition Leader Class Age of Extinction Optimus Prime figure a few years back. Sadly, that version had the hitch modified a little, so it’s not an ideal fit, but it still presents beautifully and is superbly shiny too! 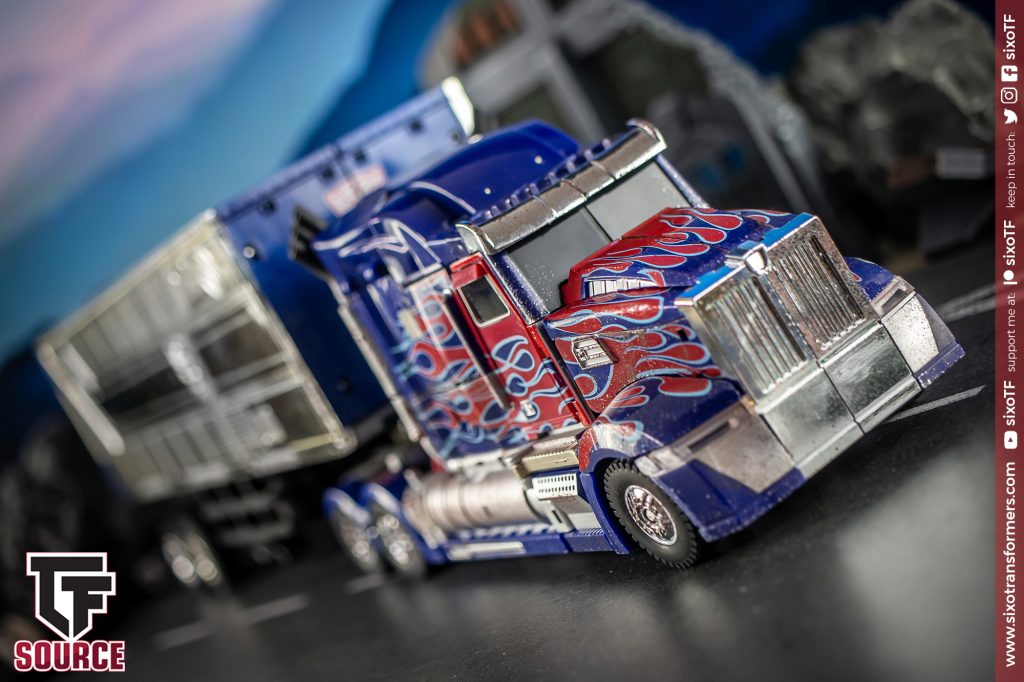 True, the non-weathered finish on the trailer arguably makes it a better match for the original Challenger release, but either way, just look at how beautifully that presents, eh? Bling! 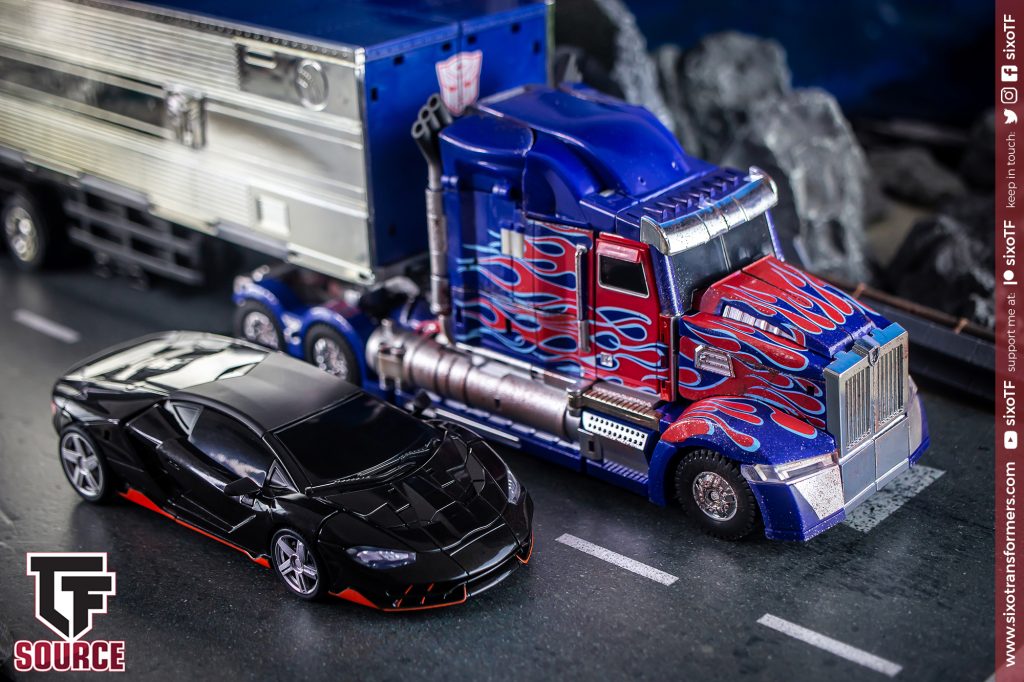 Anyway, a top effort from Unique Toys so far, as they take one of their most celebrated designs and give it a decent polish. I’m sure some might view the idea of a battle-damaged release with cynical eyes but honestly, it’s all so well done that I end up thinking, “why not?” 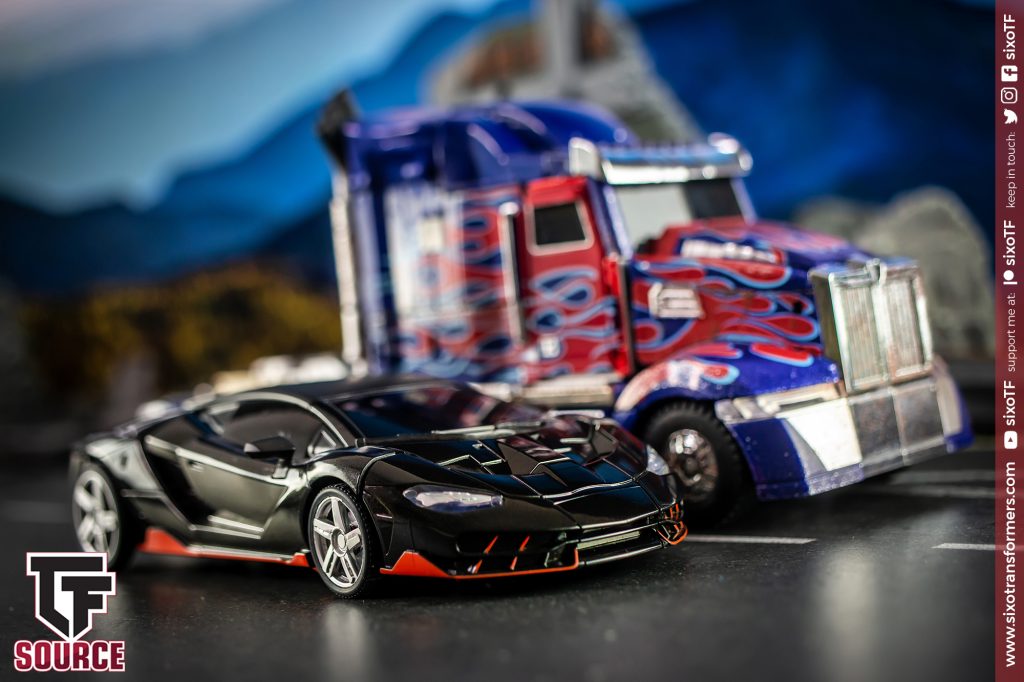 After all, if you’d designed something as nice as this, you’d probably want to take it out for a victory lap, too! 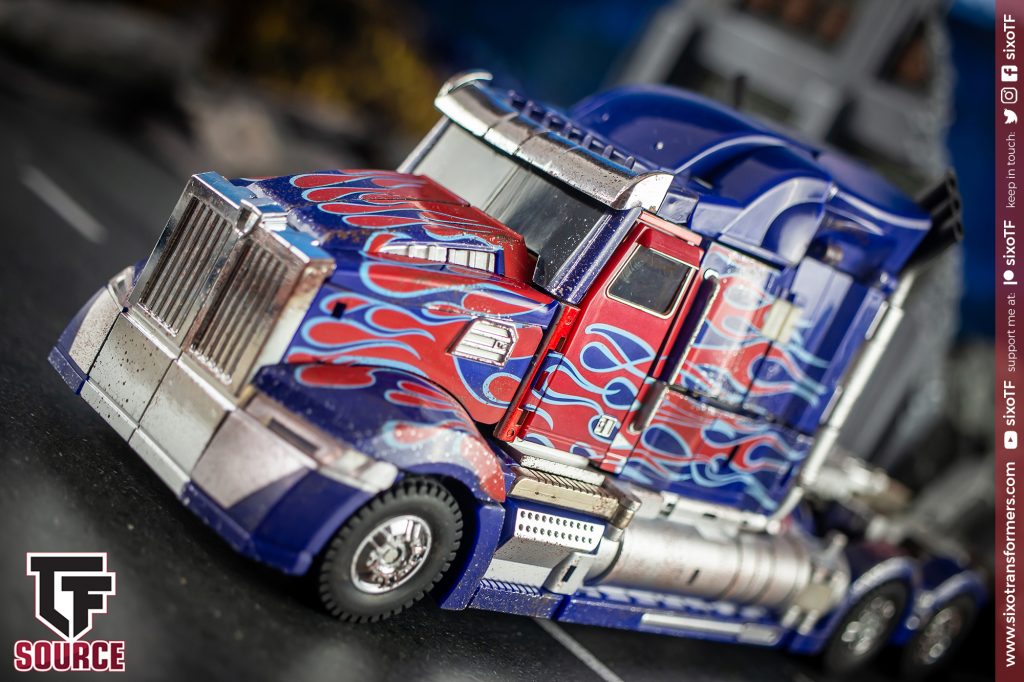 Join us for the next part when we’ll get Challenger transformed into robot mode!