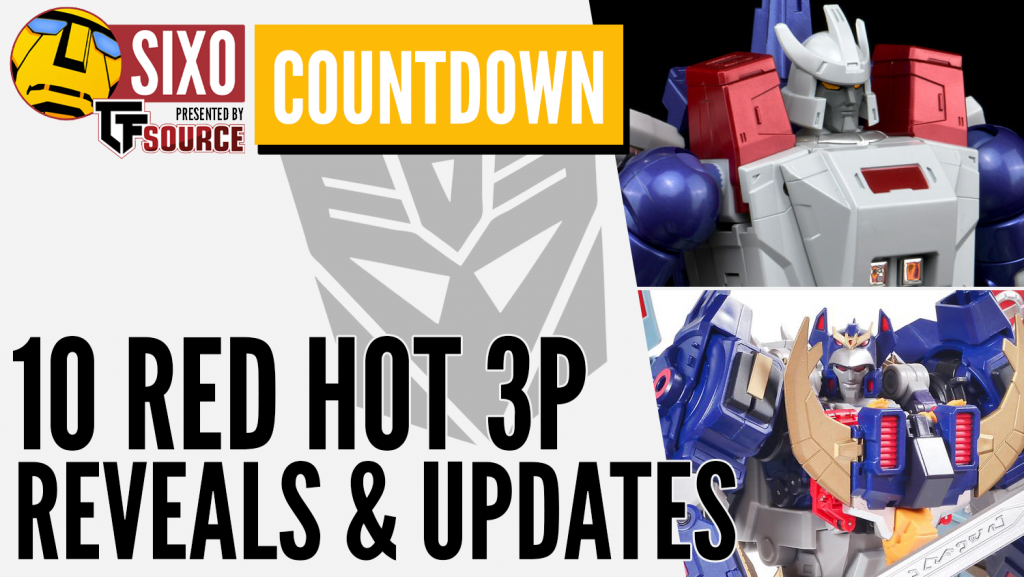 It’s been another action-packed few weeks in the world of third party transforming toys, with plenty of hot new reveals and updates relating to the robots in disguise! It can be hard to keep up with so much great stuff emerging, so here are ten examples of toys that have either just been unveiled or have had significant progress updates that caught our attention! 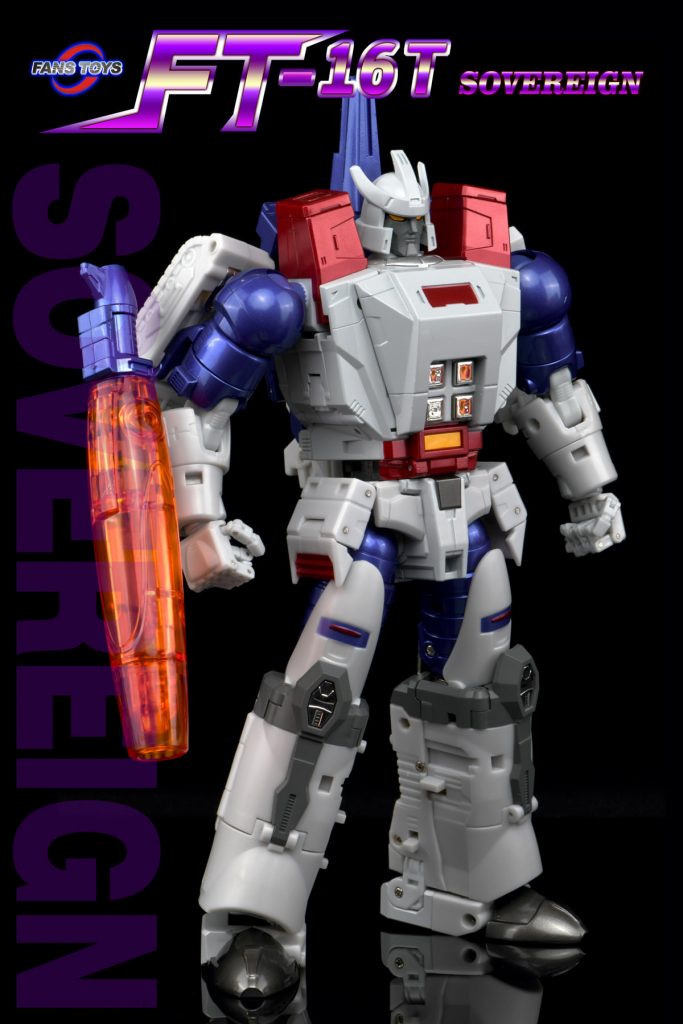 A new FansToys reveal always gets the internet shaking, and so it was on Friday when they unveiled a new repaint of their popular Sovereign figure in classic G1 toy colours! I awoke to the news first thing; by lunchtime, pre-orders had already started, and by the end of the working day, it seemed like the figure was already sold out everywhere.

Still, it’s easy to see why there’s so much excitement, especially considering it’s been three years since FansToys unveiled the last use of this mould (their ‘M’ version, in slightly different purple), and collectors were already clamouring for a grey repaint at that point. Frankly, I think most of us just assumed it would never happen by this point, but now, at long last, here we are. 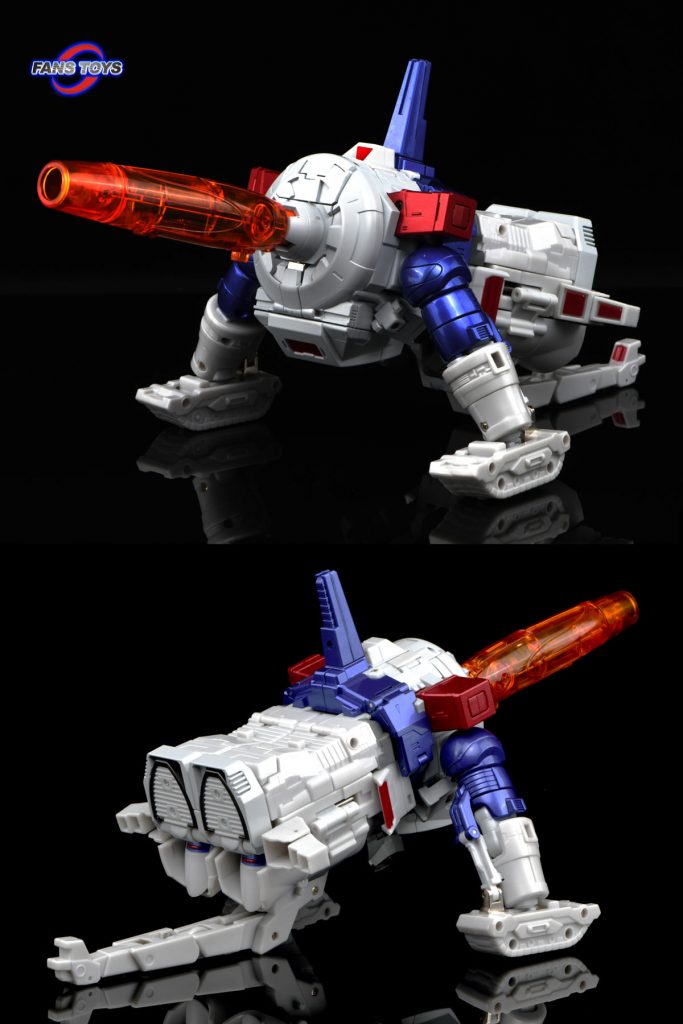 I’ve seen some suggestion that maybe FansToys have been spurred on by the recent official take on this colour scheme with the Generations Selects figure. Either way, it’s an unprecedented step for a company that seemed to be moving away from such releases in more recent years, but whatever the motivation, I couldn’t be happier with the results, as this thing looks *stunning*. 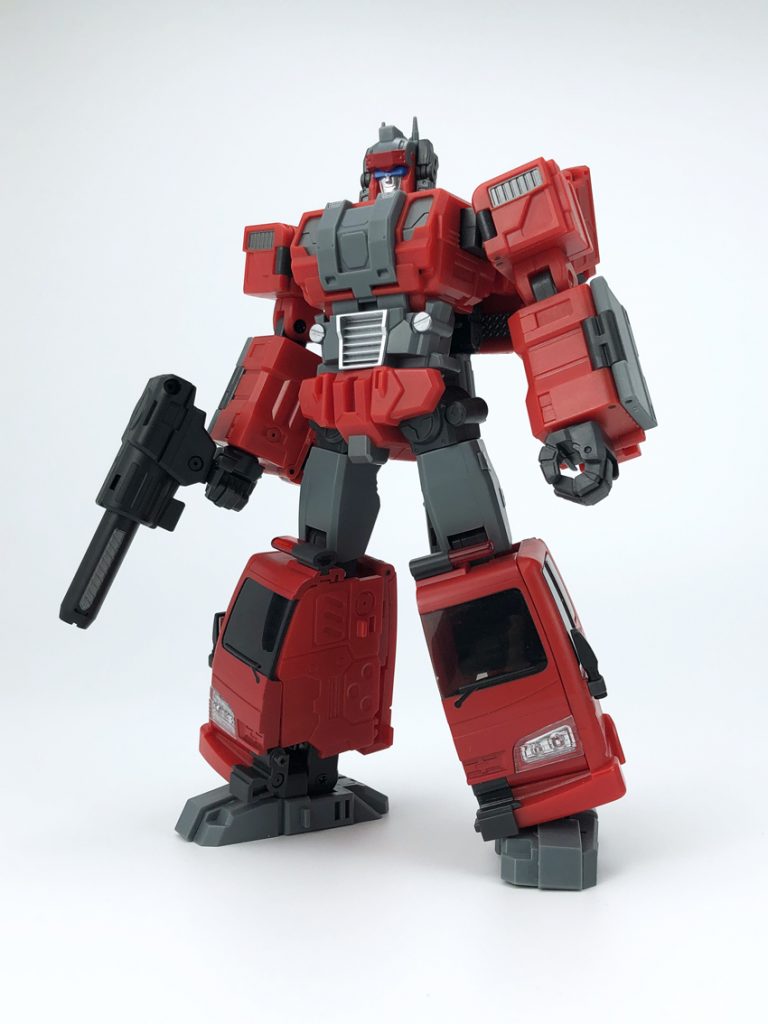 We knew it was coming, right? Yes, Fans Hobby is giving their Kap design another dusting off after making it over for a recent TFcon exclusive! Now they’re putting out a version more in line with the G1 Hosehead toy, as opposed to the Masterforce cartoon stylings of the original release. What does that mean in practicality? Well, the white bits on the first toy are now dark grey. It’s hardly the biggest difference ever seen, but I suppose it’s a fun design, and at least it means a complete set of Autobot 1988 Headmasters. 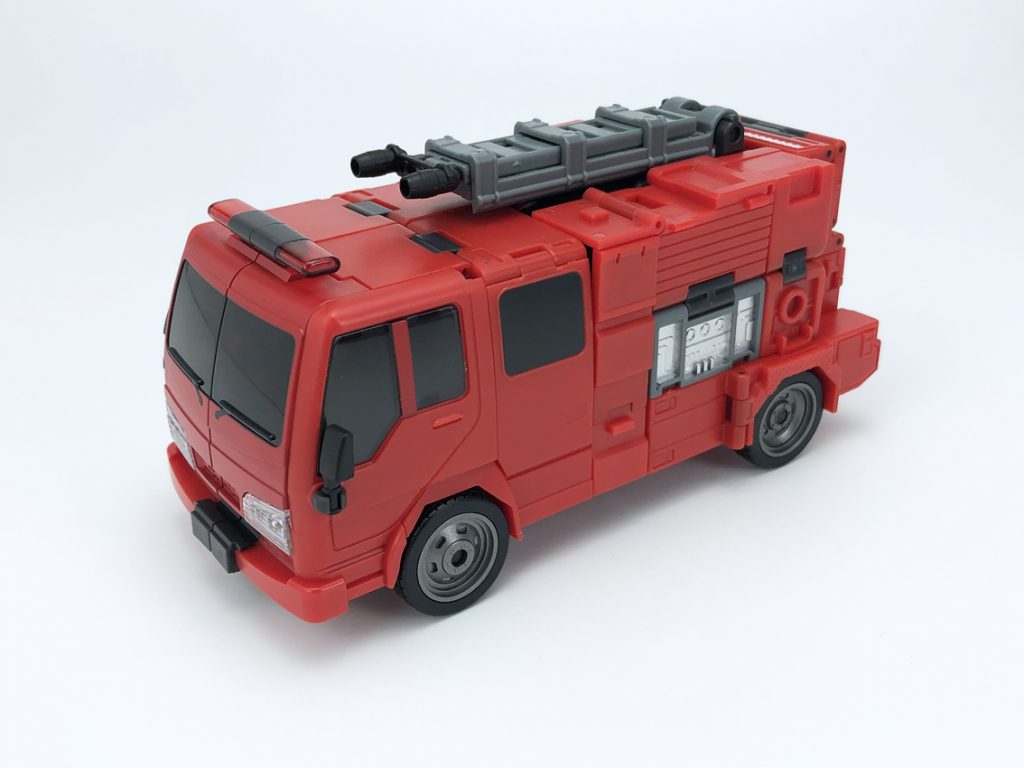 And besides, that fire engine alternate mode is still as cute as a button, right? 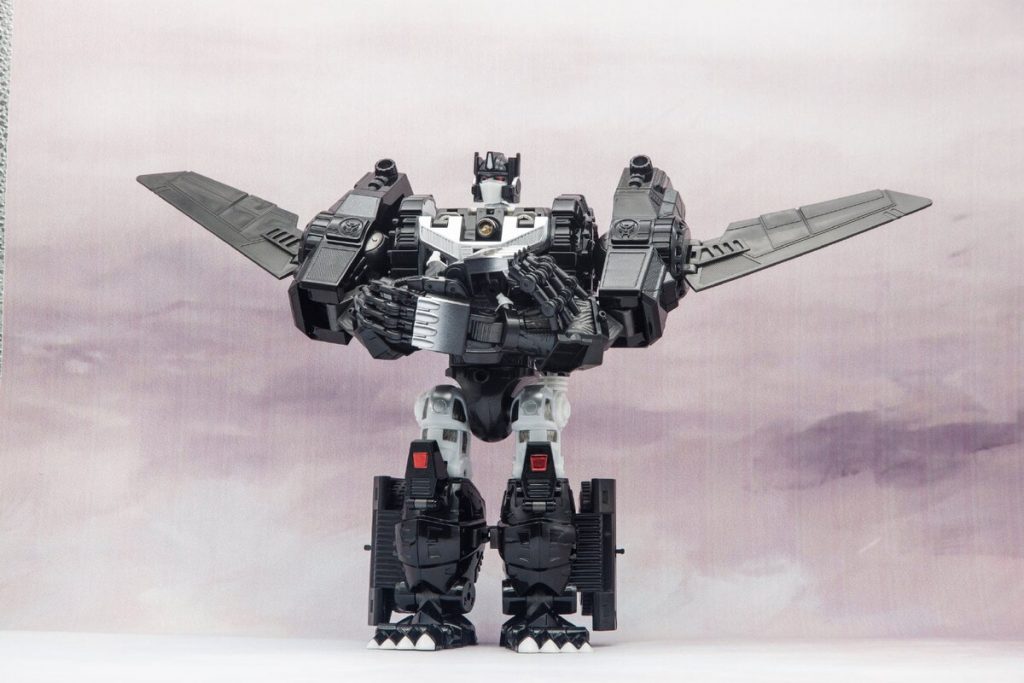 It’s always a bit of a funny situation when a toy hasn’t even been released, yet it’s already clocking up the revealed repaints! Take this lad from TransArt, for example. Their initial Beast Wars Optimal Optimus figure has yet to take flight, but already, this is the third version we’ve seen from them (after a red and blue ‘Primal Prime’ recolour too). This new reveal keeps the latter’s mouthless faceplate look but swaps out the more colourful palette for a predominantly monochrome vibe that is sure to please fans of Nemesis Prime repaints! 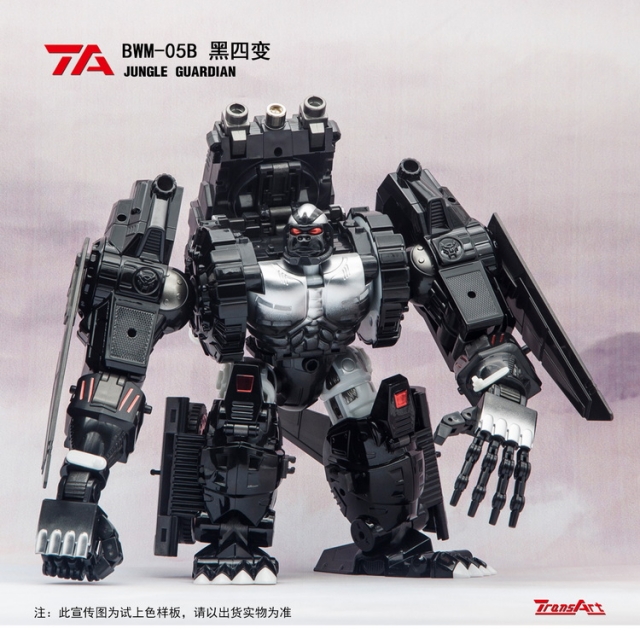 It looks rather swish, too, with perhaps my only remaining quibble being that it isn’t bigger. At a little under nine-and-a-half inches tall in robot mode, this design definitely isn’t Masterpiece scale, after all. Well, unless you want it to scale with MP-44 Convoy, I suppose! 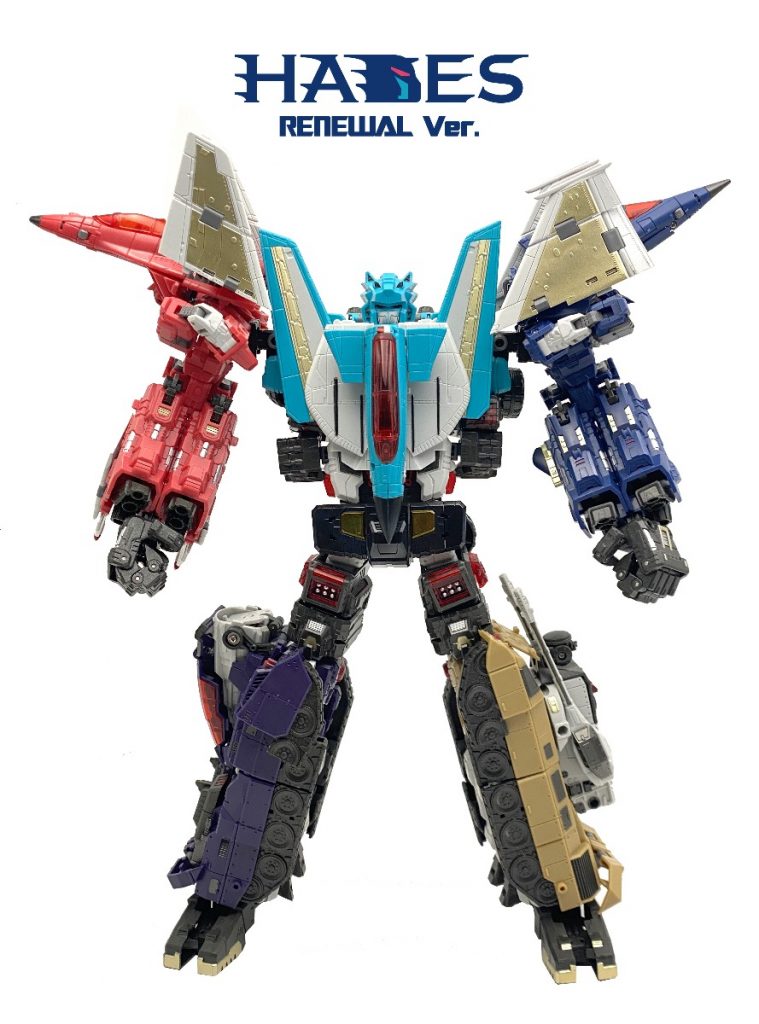 Full disclosure: I’ve never even handled TFC Hades myself before, but it’s always been one that has intrigued me since it was first released back in 2016, despite the mixed reception it received. Collectors were keen to praise its looks, but less so some of the wonky joints in combined mode. Fortunately, things seem to have improved since then, with their subsequent Trinity Force combiner being much more stable (something I can personally attest to!), so perhaps it all bodes well for a current reissue, eh? 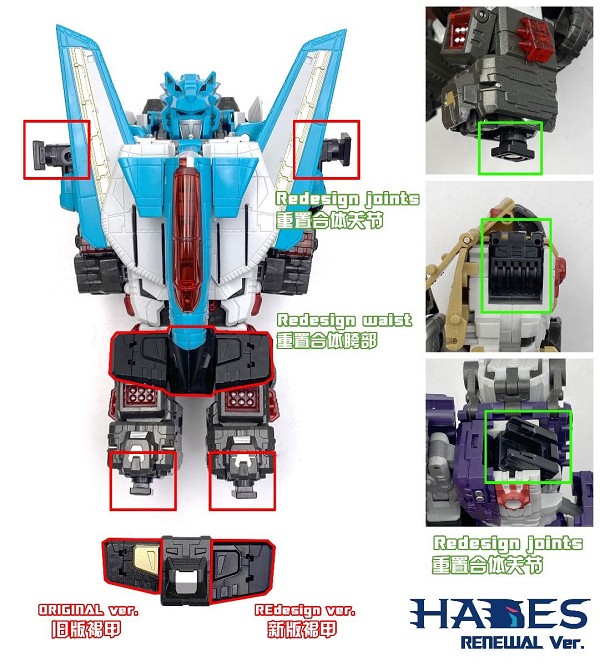 Besides, there is also a set of replacement joints alongside the new release, featuring various redesigned parts for extra combined mode solidity and improved tolerances. Fingers crossed on this one, as it could be the answer many people have been looking for!

Rising Force first teased a Stunticon line-up back in 2015, revealing a very different-looking Motormaster figure. Since then, the project has undergone many changes and was even set to be a Masterpiece-style release at one point. With this latest reveal, we now have a good look at the crew in the Legends-scale form the company has finally opted for, and they’re pretty hot! 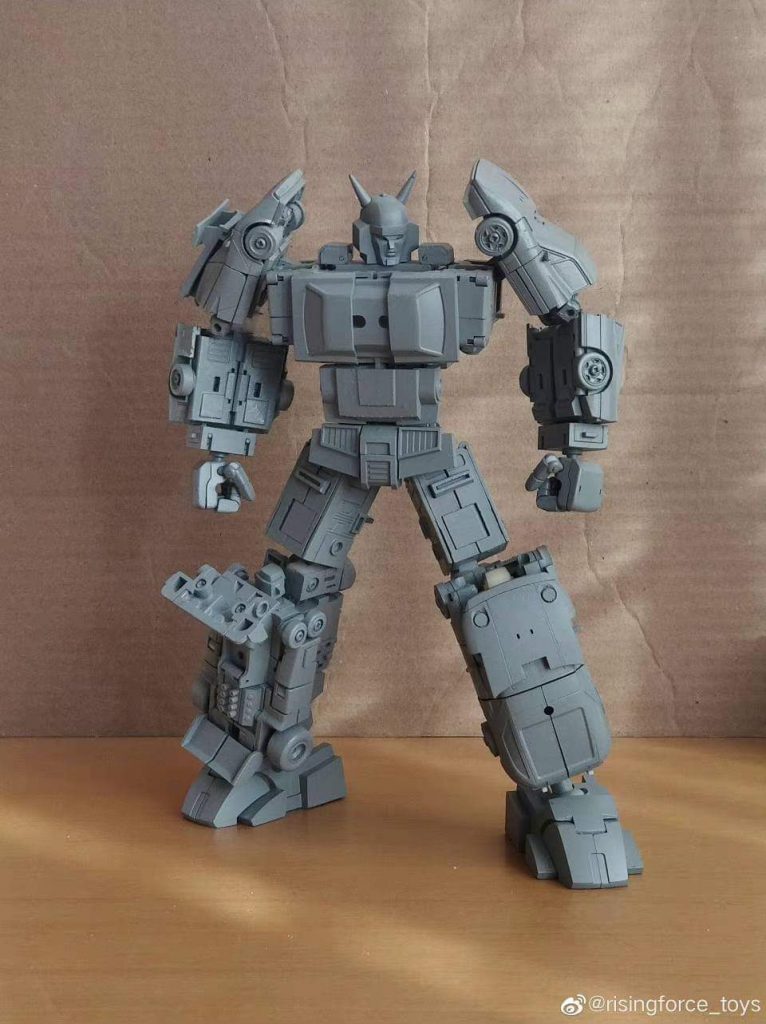 As if that wasn’t enough, the combined mode is shaping up nicely, too, with what looks to be some impressive articulation and the ability to swap the limbs around in a fashion akin to the original Scramble City gimmick. It’s set to be roughly 23cm in height, so it might be the pint-sized Menasor of your dreams! 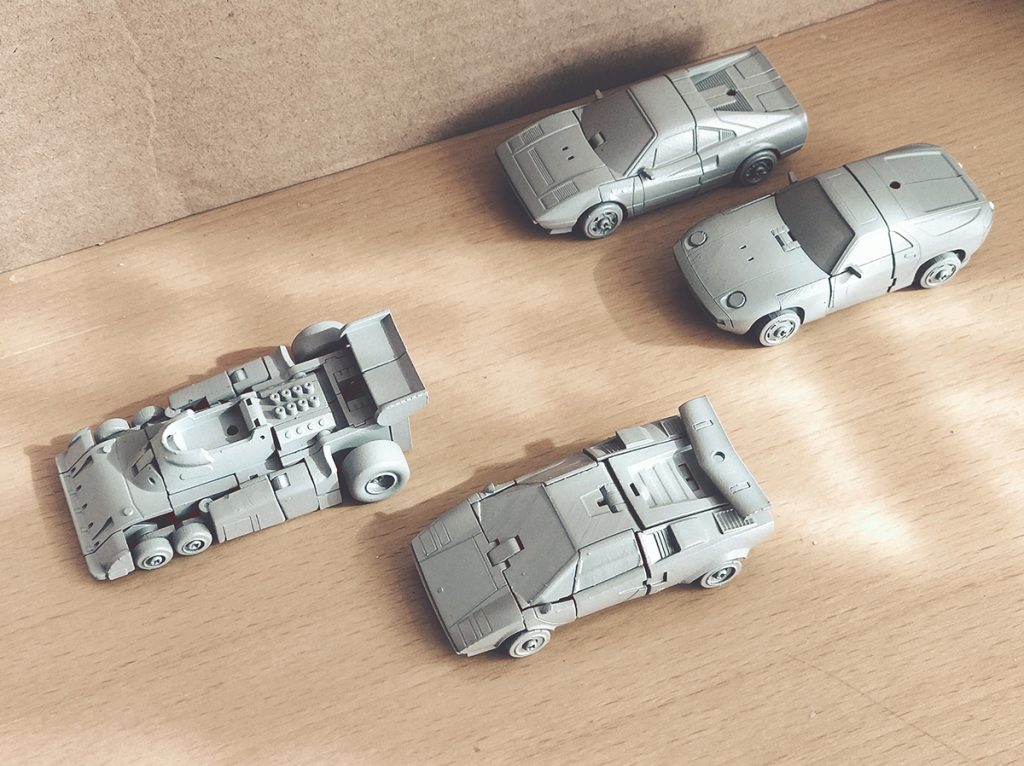 Credit to Rising Force for trucking on with this one; those car modes are looking so swish, I can’t wait to see how it pans out! 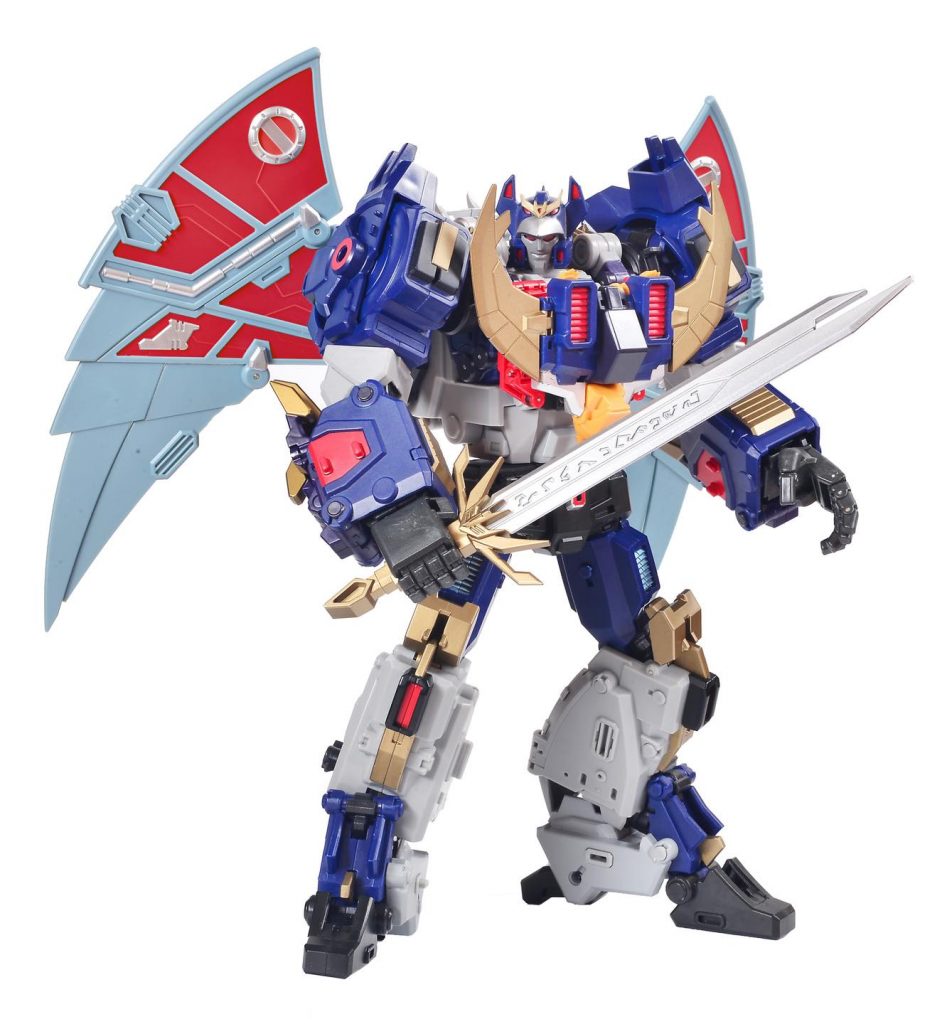 Maybe one day we’ll make a list of the longest-gestating third party products ever, and perhaps D-Zef here might well feature on it, especially as many people have had this guy on pre-order now for well over three years or so! But hey, they say the best things come to those who wait, and it seems like that may prove to be true here, as, despite his somewhat overdue appearance, few could deny that D-Zef is looking on fine form now he’s approaching the finish line! 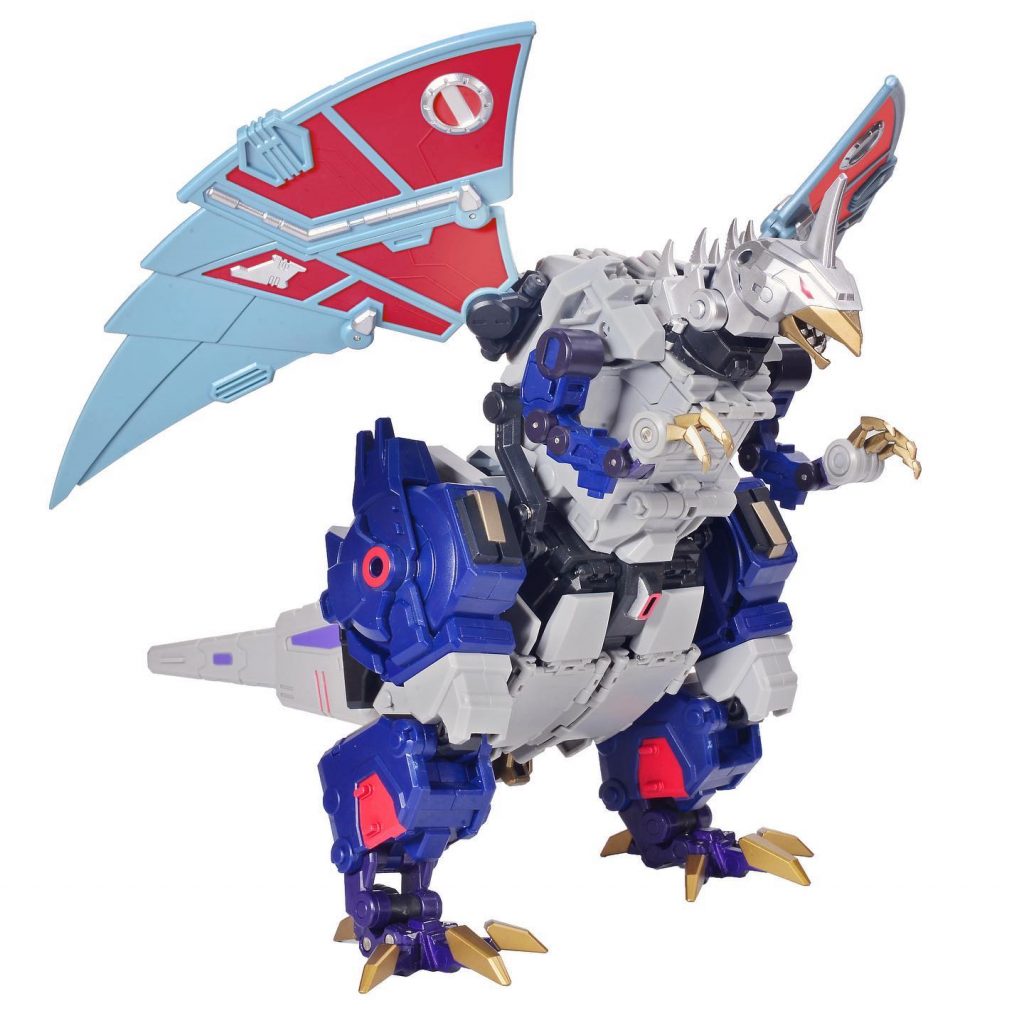 Those colours are especially noteworthy, with the eye-popping red wings and highlights on the body all doing wonders for the design overall. Supposedly the first version of D-Zef is set to drop in May (as per MMC’s own Twitter account), with a firm ‘TBA’ still on this retooled version, but whatever the case, here’s hoping the long wait will prove worth it in the end. 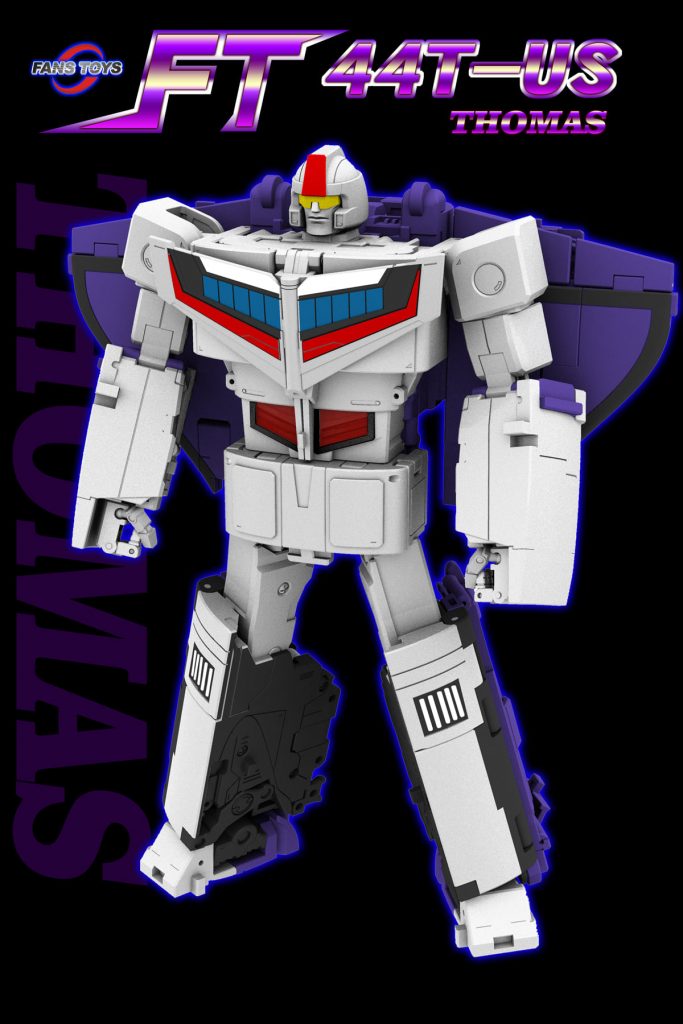 As if one new FansToys reveal wasn’t enough, they only went and doubled (or should that be tripled?) the surprise with this pair of rather unexpected Thomas repaints. Yes, that’s their Astrotrain design, and yes, it’s the one with the rather chucklesome name. However, this new G1 toy-styled makeover is no laughing matter! 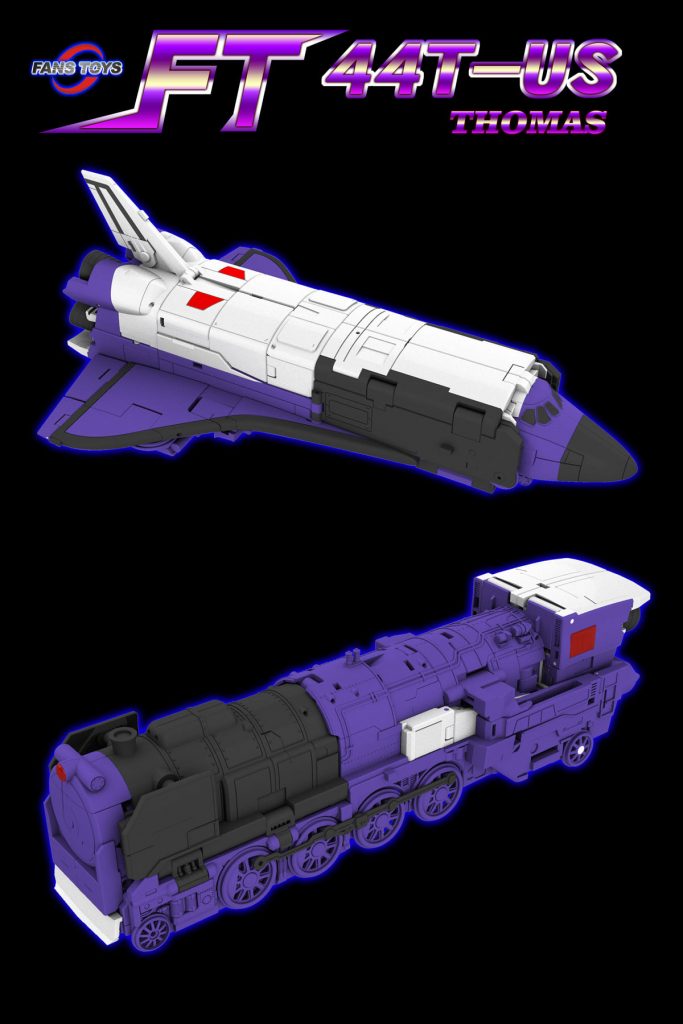 Thomas proved to be a big hit with most collectors when it landed two years ago, so a re-do is excellent news. As with Sovereign, it’s also interesting to see FT getting back into this style of repaint after it seemed like it may not happen anymore (outside of swappable parts on releases such as Robot Paradise Acoustic Wave). 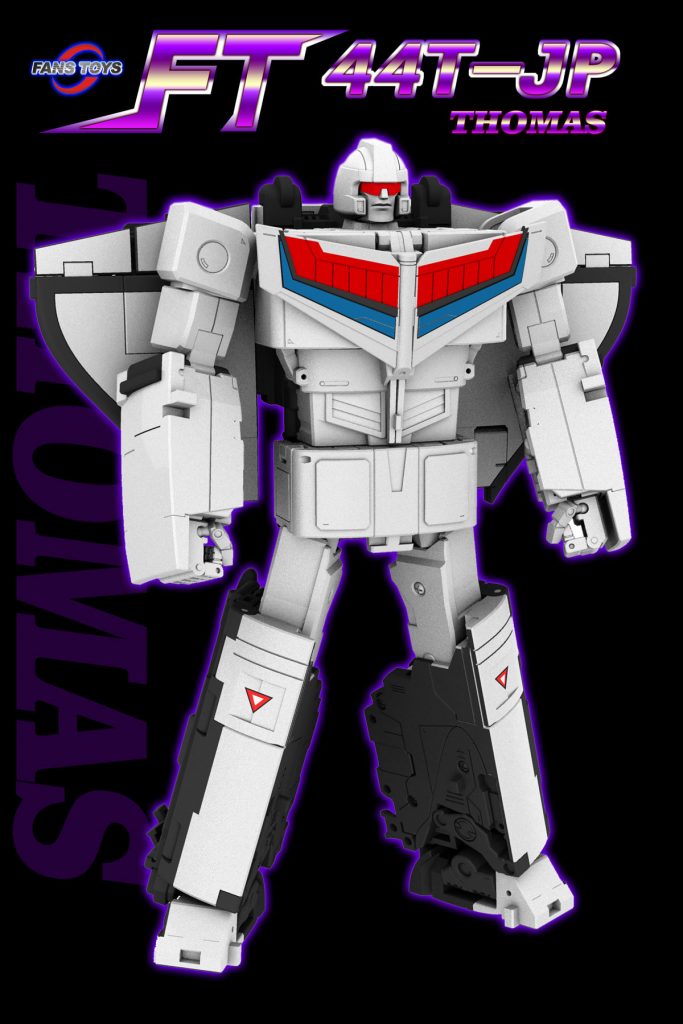 The real unprecedented news here is that there’s not just one but *two* toy-versions of Thomas on the way! As well as the 1985 Hasbro look seen above, FT-44T-JP will feature a stab at the equivalent Takara design from back in the day, meaning that regardless of where you grew up, your nostalgic Astrotrain dreams are more than being catered for. 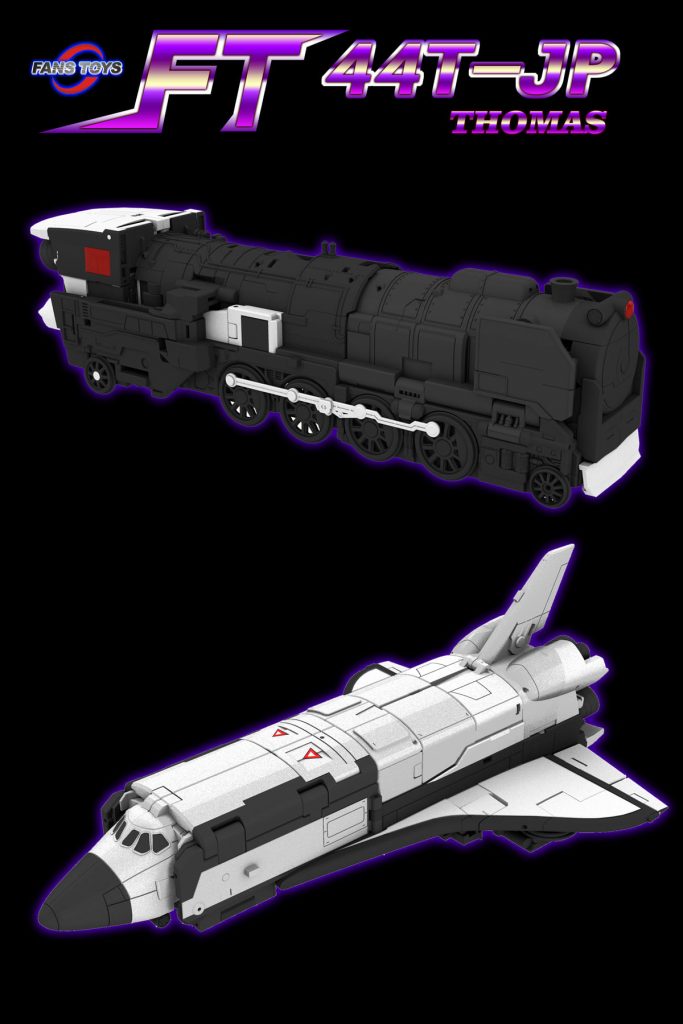 I was personally always a fan of the black and white style of the alternate modes on the Japanese version, so it will be intriguing to see how that translates to FansToys’ more intricate design. Can’t wait! 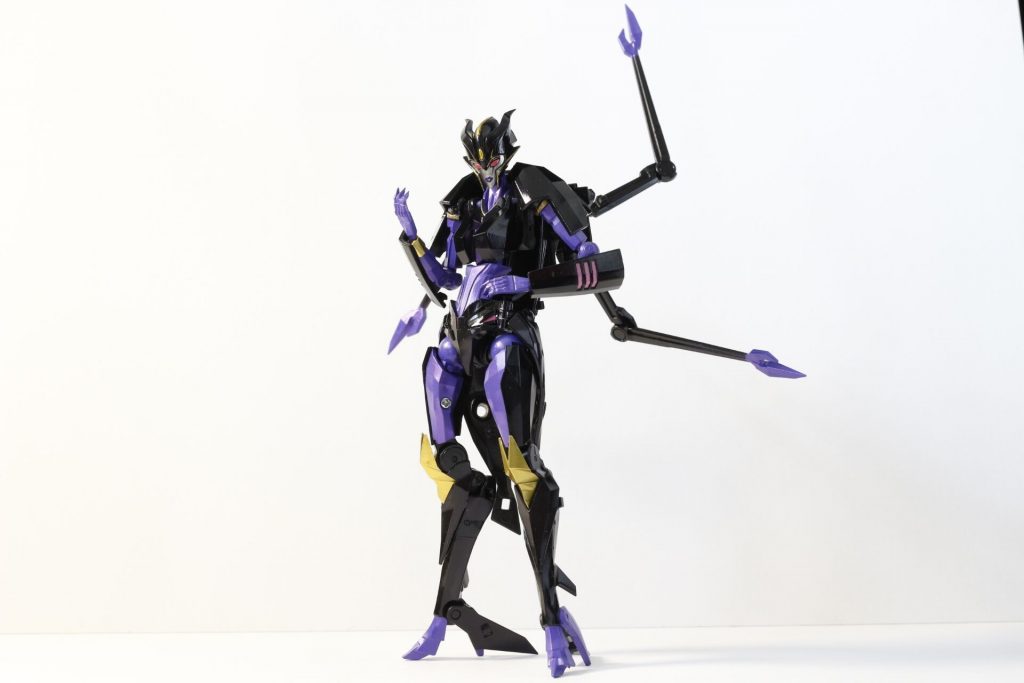 Hey, remember Transformers: Prime? While sometimes it seems like the series that began in 2010 is often forgotten about these days, there are still plenty of fans. Just as well that APC Toys have this rather attractive offering on the way! 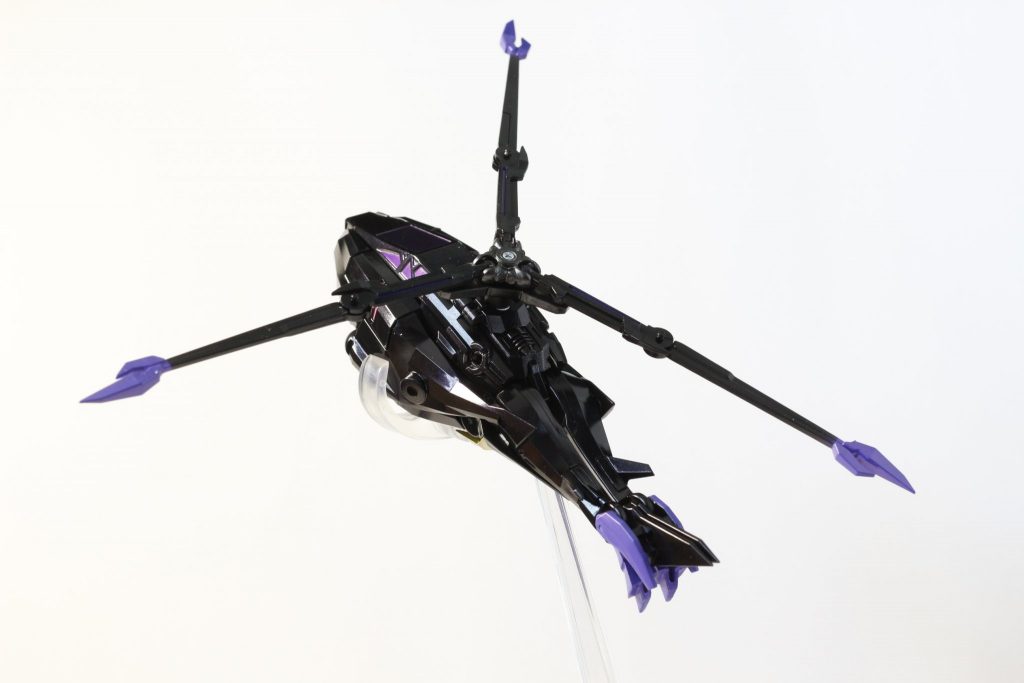 This isn’t the first we’ve seen of their Airachnid design, although it confirms the colour scheme and gives us a much better idea of the final product. It’s certainly way more cartoon accurate than anything we’ve seen for the character in toy form before and looks to faithfully recreate her quasi-spider form seen in the show, too! 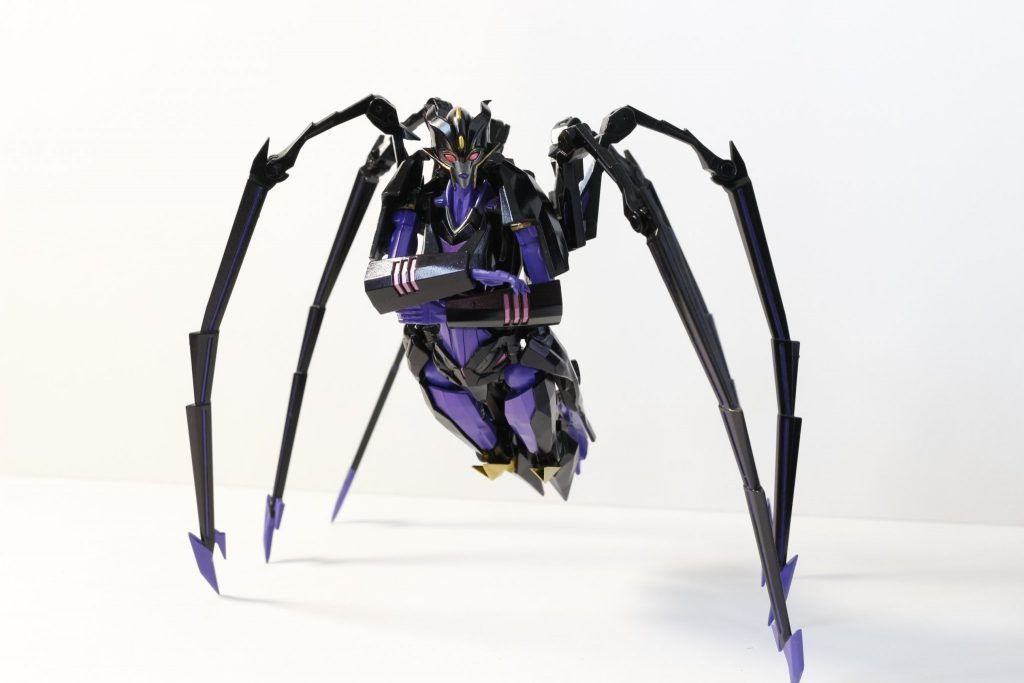 Looking forward to seeing how this one pans out! 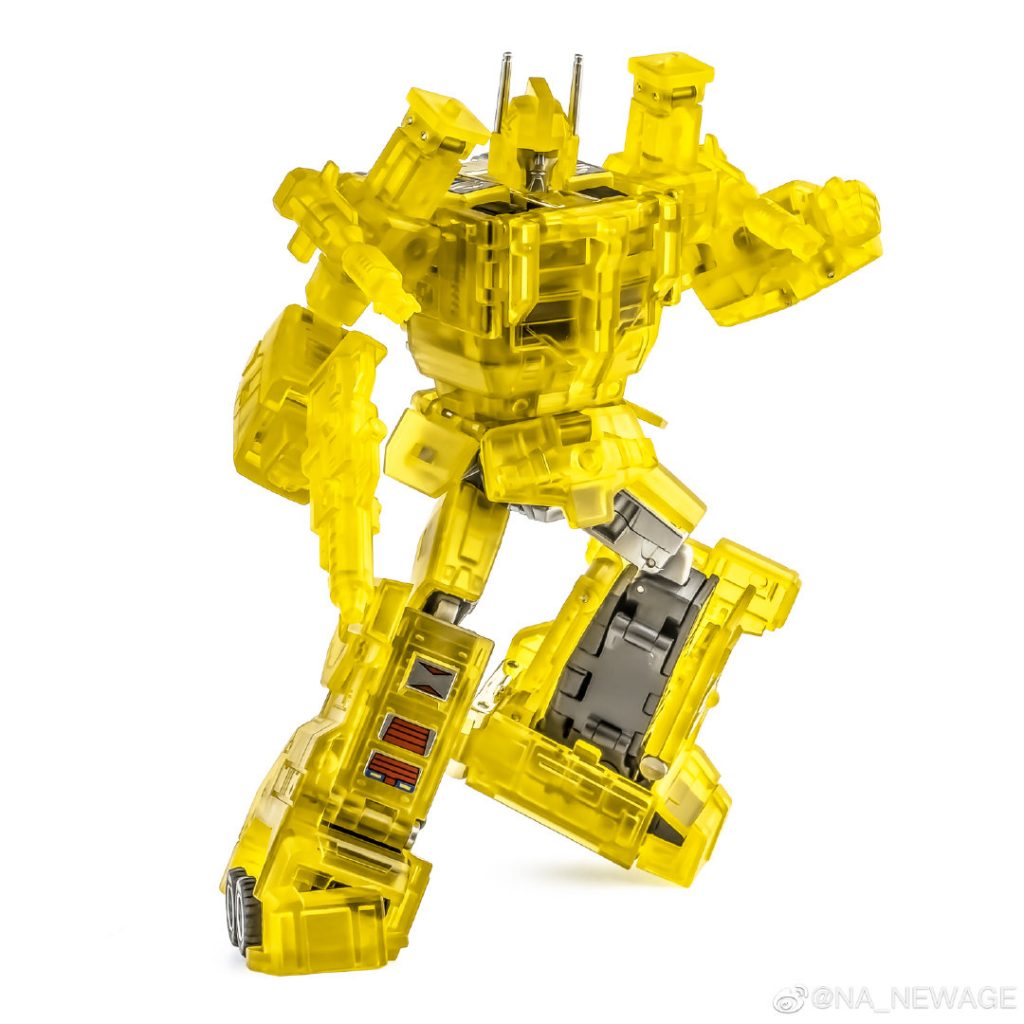 Of all the guarantees in the Transformers fandom, the reaction to a clear yellow version of Ultra Magnus is undoubtedly one of the strongest. Despite officially being known as ‘Shining Magnus’ or ‘Matrix Glow Magnus’, there really is only one name fans tend to use for this colour scheme. If you don’t know it yet, I won’t repeat it here, but… well, I think you can guess! 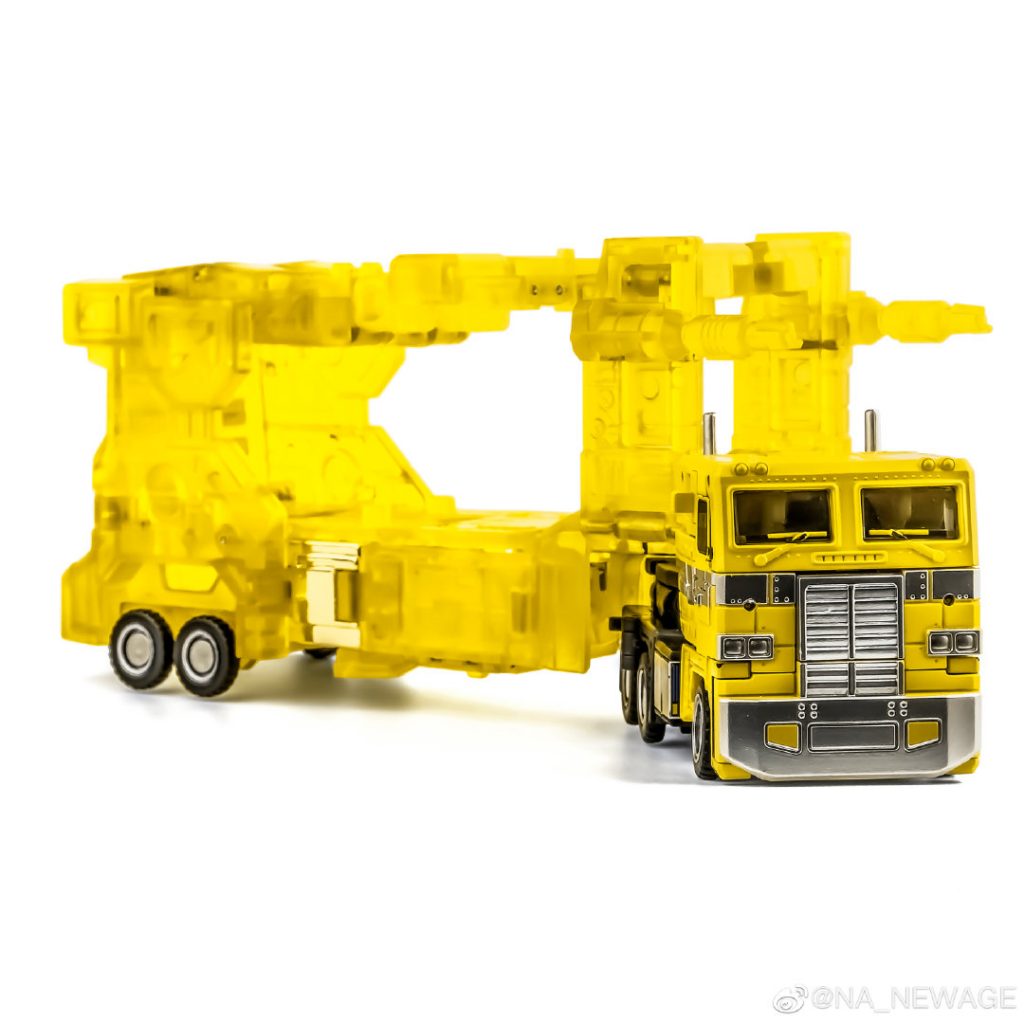 In any case, this Legends-scale release looks nothing shy of spectacular and perfectly recreates the look and feel of the G1 original toy. However, this version even comes with an added bonus – it glows in the dark! This one might just be a must-buy for Shining Magnus fans (there are DOZENS of us!). 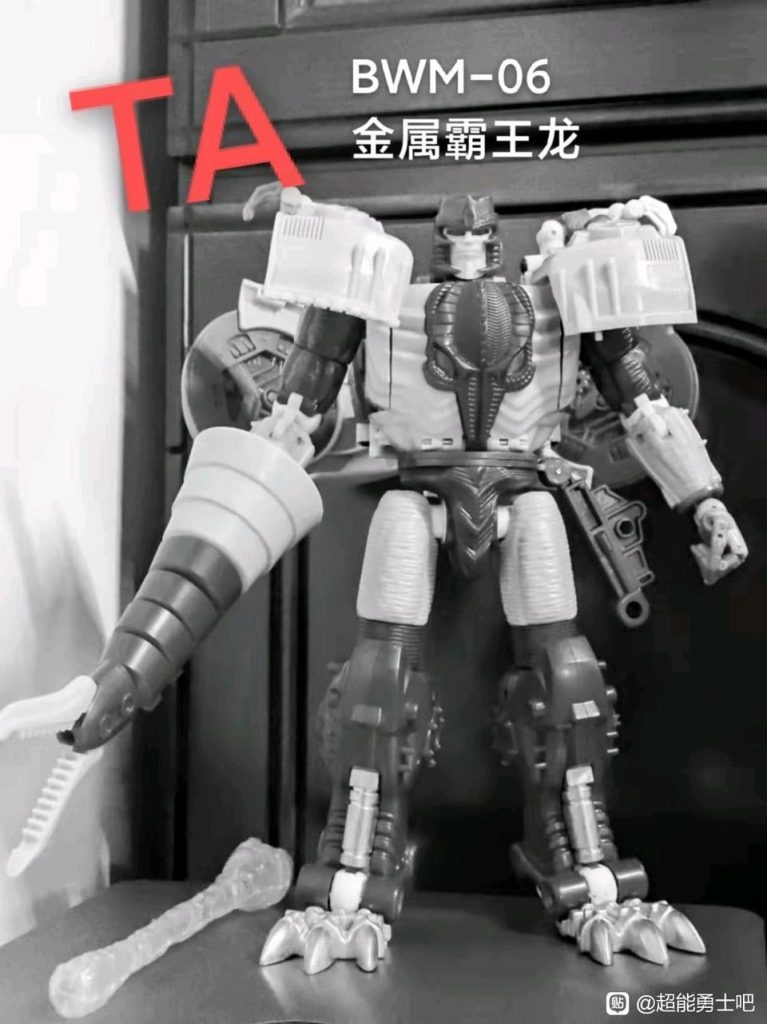 It can’t just be me who is even more excited for Masterpiece Beast Wars toys than I am for Generation 1 stuff, right? That’s especially true now that the third party world is slowly waking up to this roster of characters, with TransArt very capably leading the charge! I’ve enjoyed their Optimus Primal, Cheetor and Ravage designs thus far (to say nothing of their fantastic Transmutate attempt!). Still, all along, the idea of a Masterpiece-Styled Transmetal Megatron was the thing that really thrilled me. 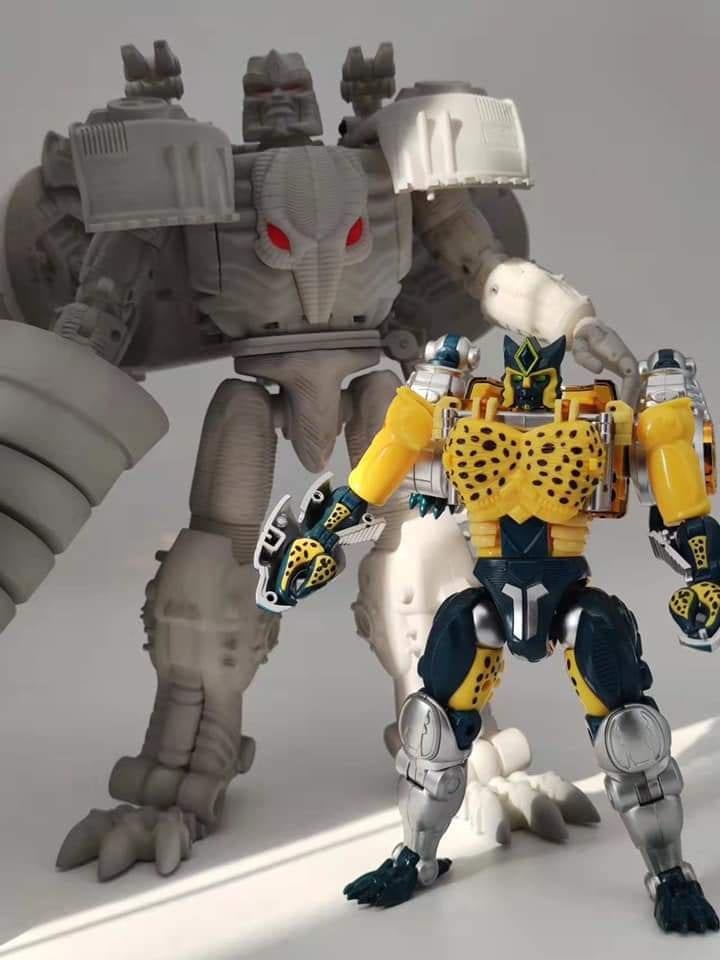 And now it’s here? Well, there are some out there who have quibbled the proportions or other aspects of this prototype, but to my eye, it looks pretty spot-on, all things considered! The design of the thing seems every bit accurate to the CGI animation and really captures the character’s likeness to a tee. Here’s hoping we get to see it in colour before too long! Yesss.

So, that’s our list! Which of the various releases are you most excited about?