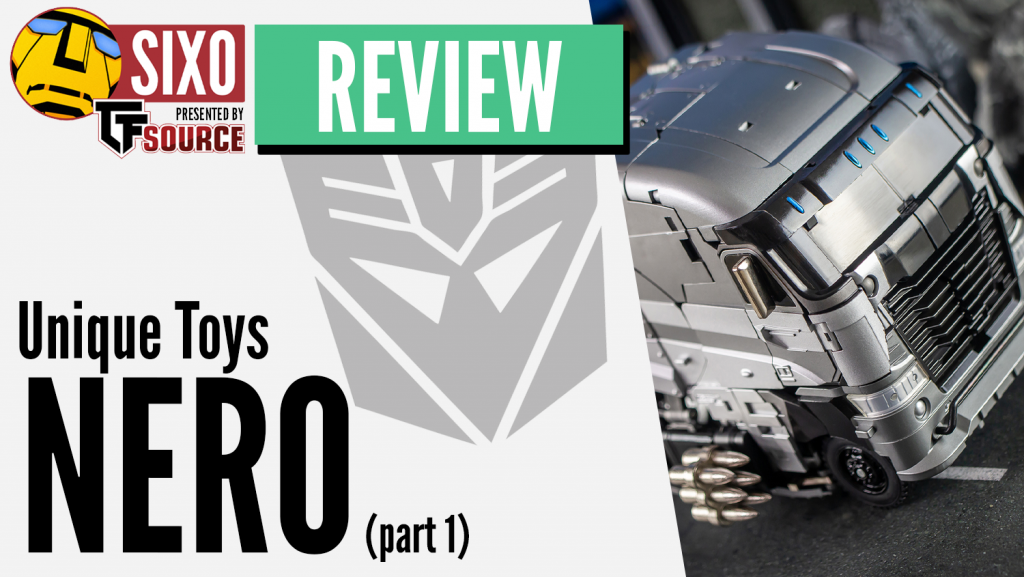 Ah, the live-action Transformers films. There’s no denying their positive financial impact on the franchise, yet I think even their most hardened fans would agree that they’re full of some bizarre decisions at times, and one of the most obvious examples of that is Age of Extinction.

That’s the fourth one, in case you can’t quite remember. Y’know, the one where Optimus threatens to kill humans, Mark Wahlberg claims to have invented some of the most pointless contraptions known to humanity, the Dinobots show up for a brief sweet spot at the end, humans discover a programmable metal named ‘transformium’ (seriously), and we get to learn far, far more about American legislation on relationships with minors than should have ever been committed to film. Oh, and that’s not even half of it.

It’s a peculiar overstuffed mix of both cool ideas executed questionably and incredibly poor ideas given way too much focus. Even as I sit here now trying to convey what a curious and outlandish final product it is, it’s hard to capture it all in a way that truly takes account of everything in its preposterously long runtime. 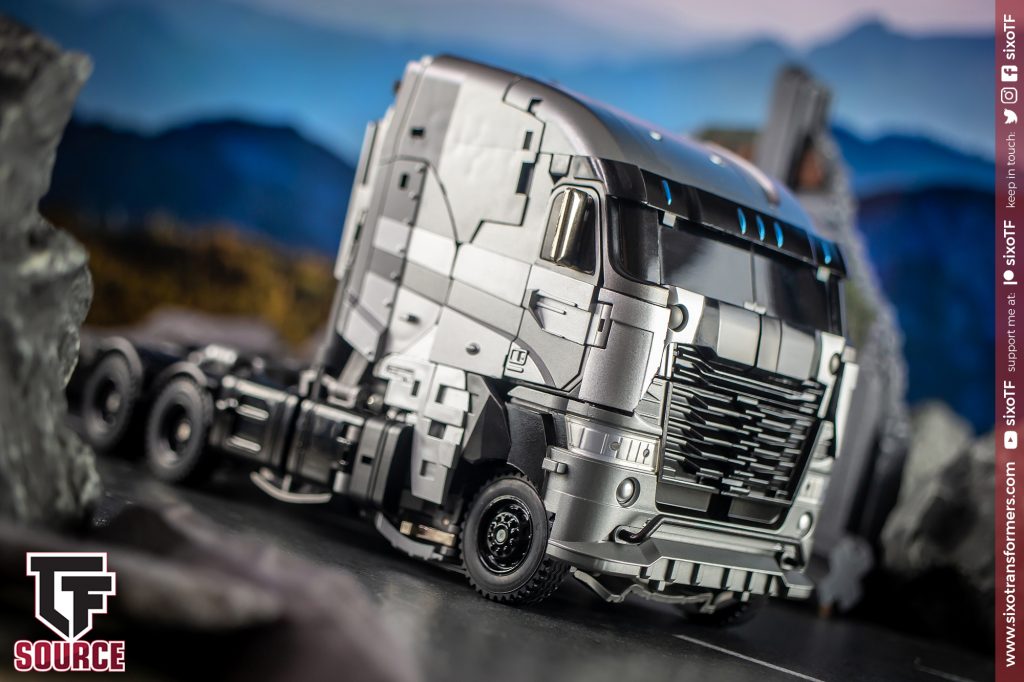 Yet perhaps one of the more befuddling elements is the treatment of Galvatron, a character brought back from the dead in a manner that could have been genuinely intriguing if handled well, especially as it’s a unique spin on a classic bit of franchise lore. Unfortunately, he ends up with just a smidge over four minutes of screentime (I checked), and most of that is him either being built or simply hanging around in the background in truck mode whilst Stanley Tucci hams it up. Put it this way, once Galvatron ‘comes alive’ at what I want to say must be around the film’s second act (if such a thing exists), he’s left with under a minute and a half of appearance left. Gone in ninety seconds, you might say. 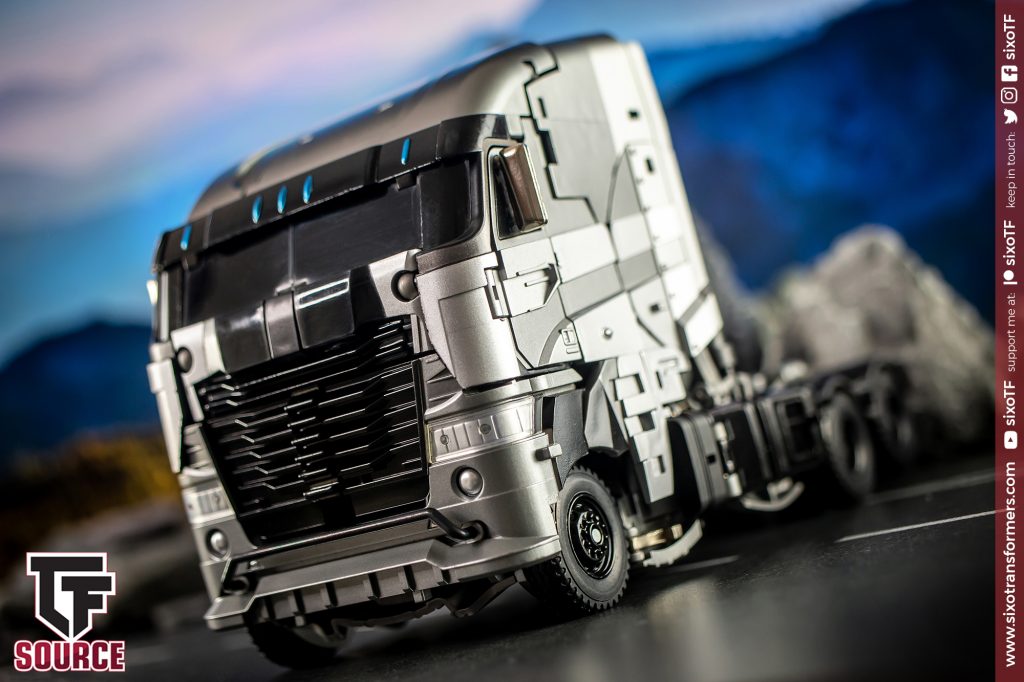 Anyway, the crucial thing to clarify here is that it’s perfectly possible to critique the Transformers films for all their worth and yet still appreciate and enjoy some of the unique ideas or concepts they present, with one of those being the designs of the robots themselves. Sure, they’re not to everyone’s tastes (and some of it is still too much, even for me), but despite his limited presence in the story, I can’t deny that I think Galvatron looks pretty epic when he actually is on screen.

So it’s been with great excitement that I’ve watched Unique Toys stepping up to the plate with their Nero design, as they once again look to recreate one of the characters in a way previously not thought possible in toy form. They’ve built themselves a strong reputation for success in this field by now, with figures such as Peru Kill, Challenger, Dragoon and La Hire all hitting the mark. 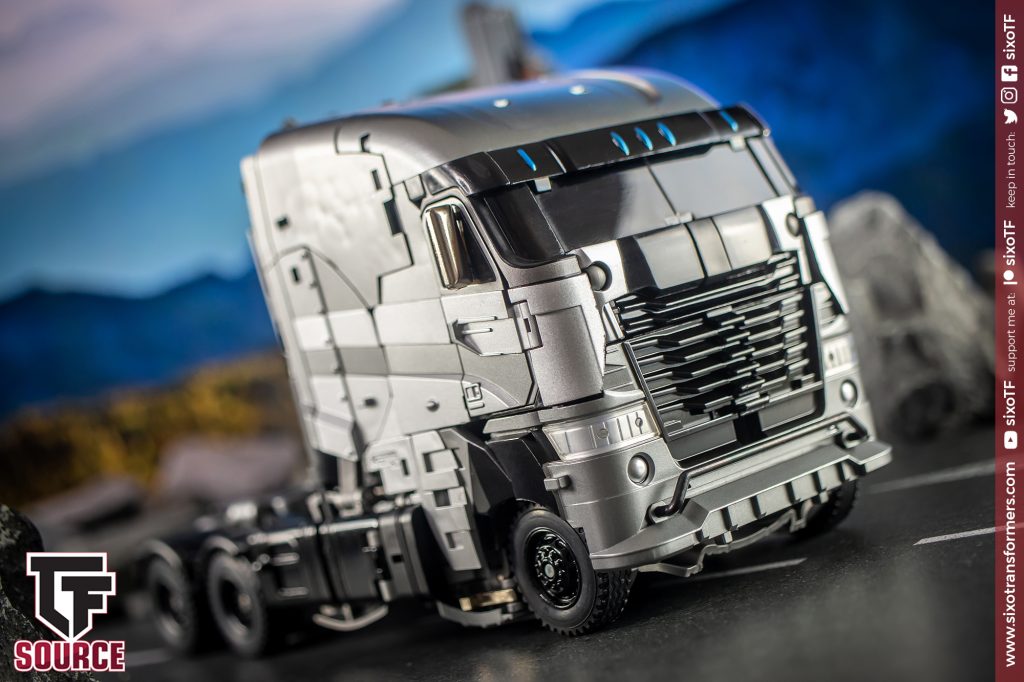 Nero strikes me as a particularly ambitious project, though, if only because of how Galvatron transforms during the movie (or rather… doesn’t?). Yet they’ve managed it somehow, as I can personally attest by having crammed this thing through the various steps required to present it in truck mode. And you know what? It was actually kind of fun!

Don’t get me wrong, it’s a process! There’s an incredible number of parts all need to be contorted, often in a manner that seems surprising or even somewhat logic-defying at times. Yet throughout all of it, I have to credit Unique Toys for keeping it on the right side of achievable, if only because everything moves in the way it should, with suitable clearances and precise results. Panels clip together solidly, tabs fit neatly as they’re supposed to, and overall, it manages to suitably avoid the ‘squishy’ uncertain feel that can be frustrating on so many other unofficial examples of this kind. 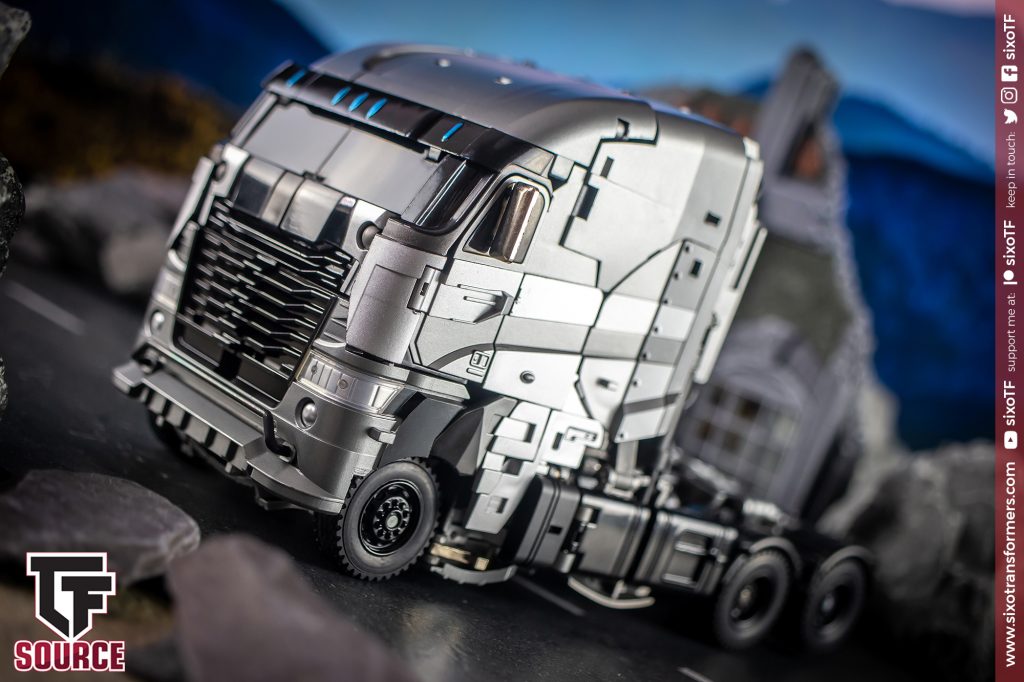 Again, that’s not to say it’s without complication, especially as I’m sure this might still seem like a daunting prospect for anyone unfamiliar with these sorts of toys. Yet of everyone attempting to craft Masterpiece-styled Bayformers right now, I’ve come to trust Unique Toys more than most in making a transformation that delivers the right results but still remains acceptable if you’re willing to go through the motions with it. 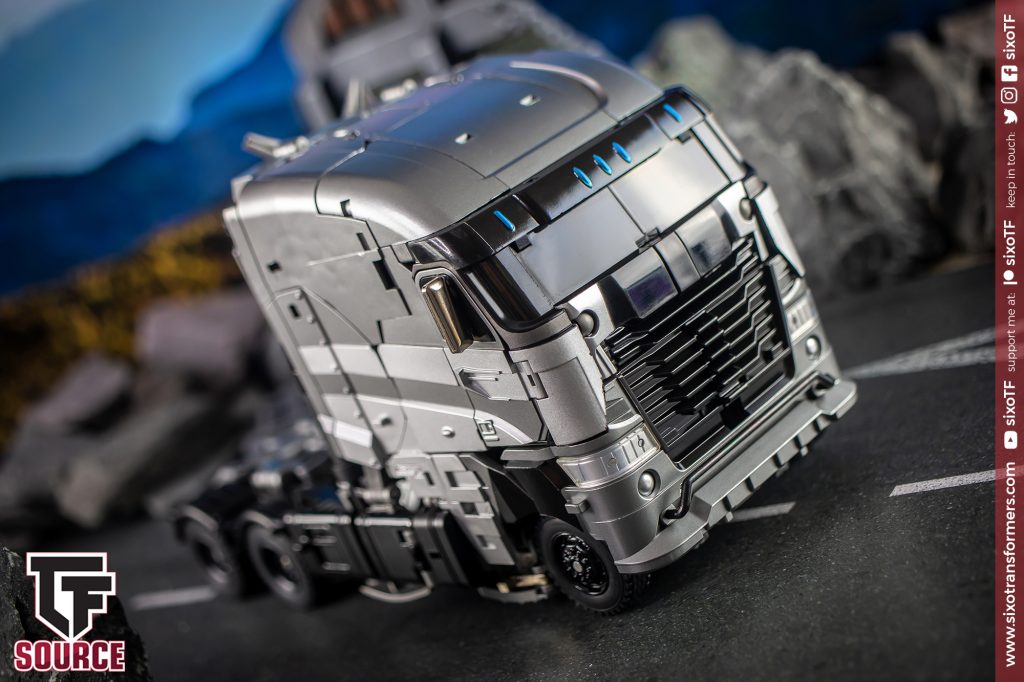 The other plus point here is that I think the effort is worth it, as the truck mode you end up with looks pretty great! It’s a primarily accurate take on the 2014 custom Freightliner Argosy seen in the film, capturing the unusual proportions and smooth rounded shape of the design in a very pleasing fashion. 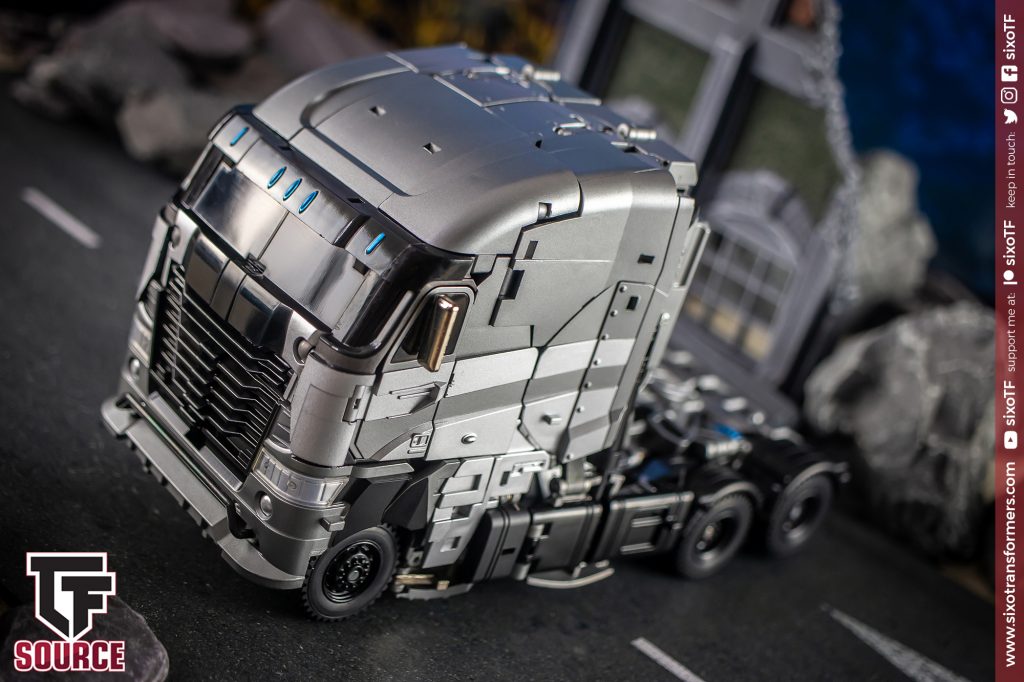 Even if faithful representation isn’t a point you’re particularly worried about, there’s no denying that big trucks are always fun for Transformers alternate forms, and this one delivers on that purely instinctive level too. It’s sizeable, chunky, well put together, and quite frankly, looks badass. 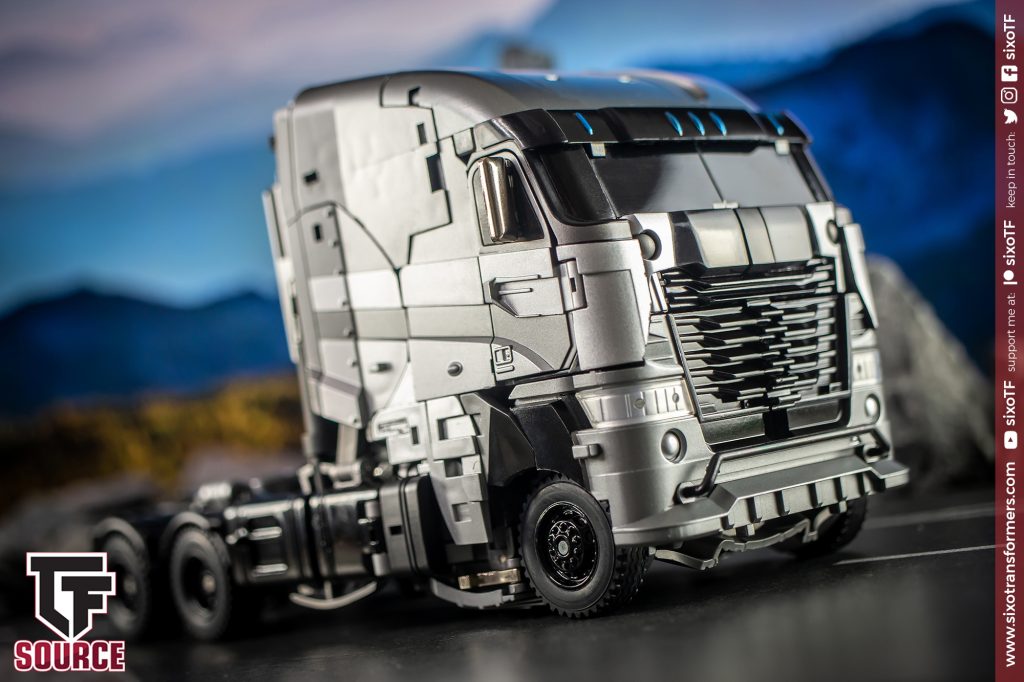 It’s perhaps a little panel heavy in places, which is a critique I make lightly given how much contorting the toy needs to go through to actually pull off an alternate mode like this. However, I feel justified mentioning it more because of how noticeable some of the seams are on the truck’s sides. It doesn’t look bad by any means, but they’re there. 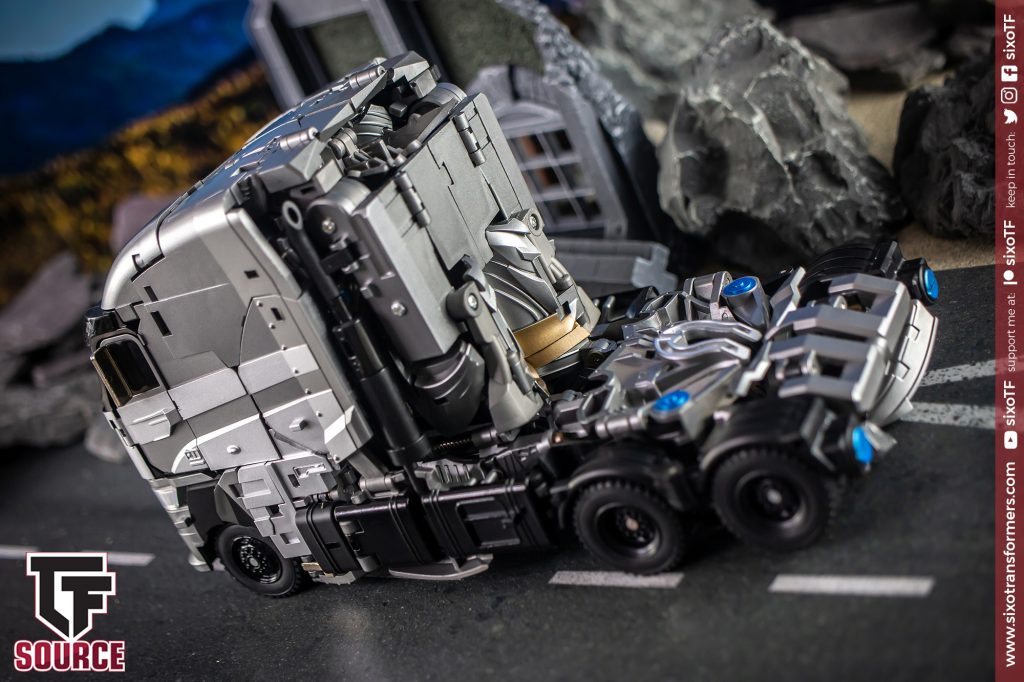 There is also the usual bit of folded up kibble going on towards the rear (something we’ve undoubtedly become accustomed to over decades of Optimus Prime toys, no?), although I think it falls well within the allowance of acceptable compromise. Overall, Unique Toys has really delivered an exceptionally tidy result, in my opinion. 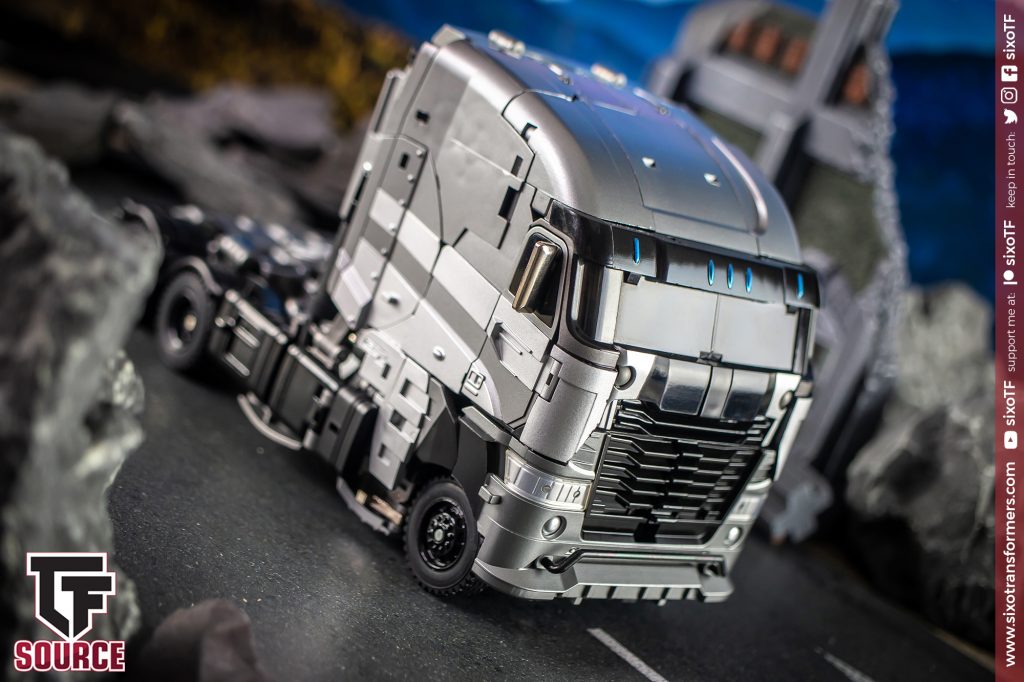 It presents well visually, too, with a thoroughly detailed sculpt. That includes many intricate moulded details where they’re needed to make it feel like a credible representation of the truck from the film, most notably on the front with the grill and bumper section looking fantastic especially. 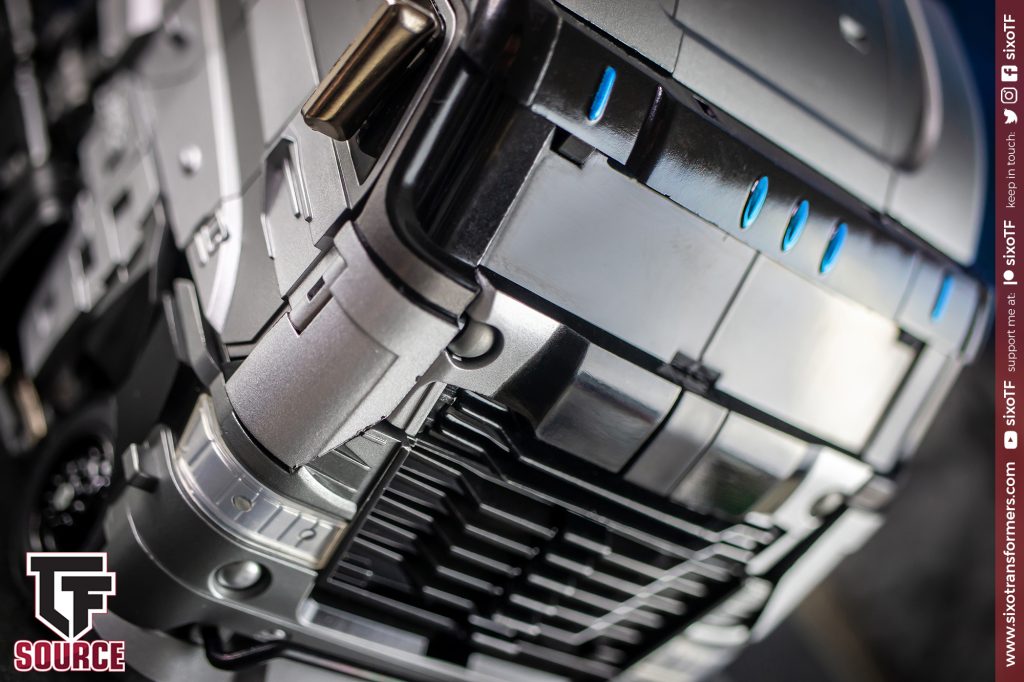 Of course, it’s naturally quite a monotone colour scheme on offer, although the little spots of painted blue above the windshield do help to offer a slight reprieve, and at least the predominate sparkly silver looks decent. I would have loved to have seen a few extra highlights somehow, especially as the real world truck has additional blue lights on the bumper and sides, but ultimately, perhaps Unique Toys didn’t have much to work with overall. 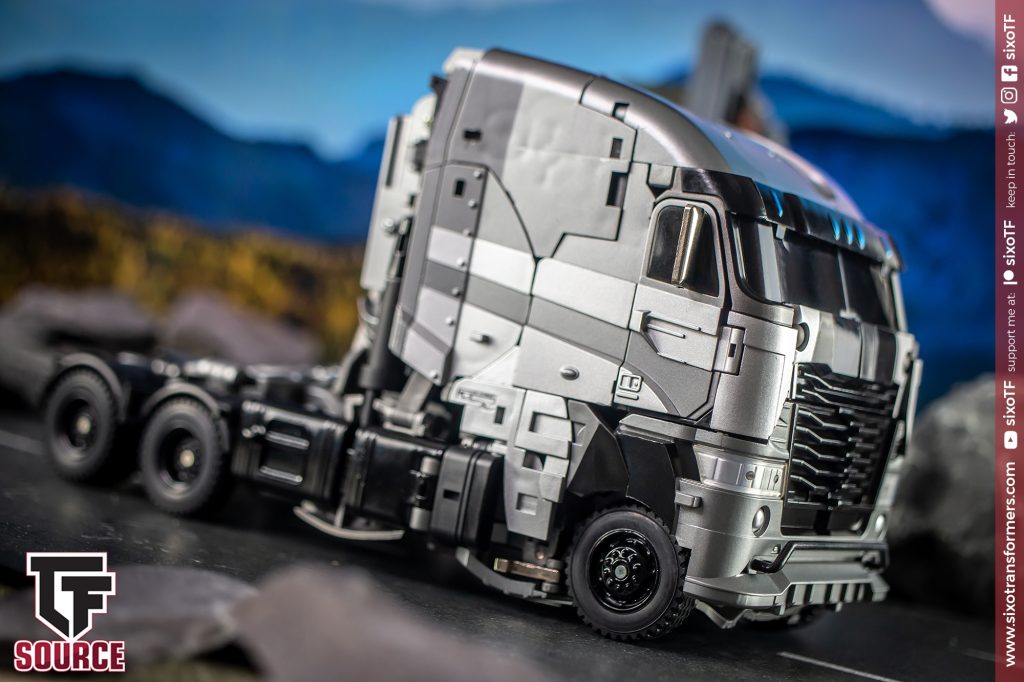 There are a couple of more genuine nitpicks to be had, though. I found that my copy is oddly ‘lumpy’ on the truck’s sides with some shallow bumps in the plastic that become more obvious when the light bounces off the silver finish. It’s by no means the end of the world, but it detracts slightly from the general look. 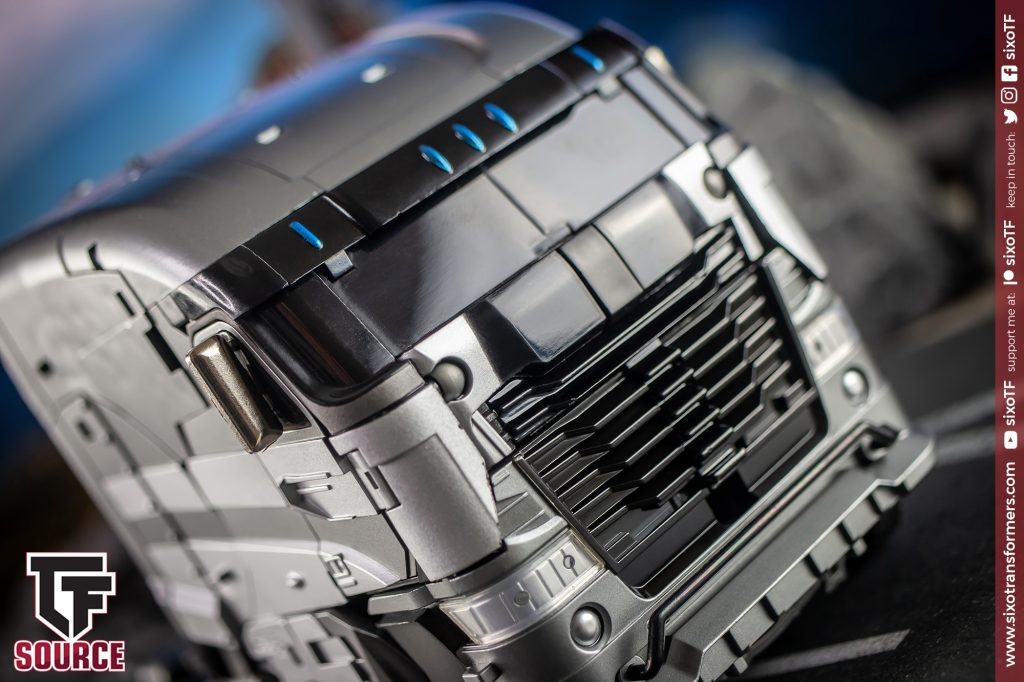 I’ve also had a few bits popping off in various places, particularly during transformation. That includes one of the translucent plastic headlights, which I suspect will need to be glued back in place, and both windows in the doors. It’s all stuff that can be remedied with ease, but still, it would be nice if things like this didn’t happen on a high-end toy right out of the box. 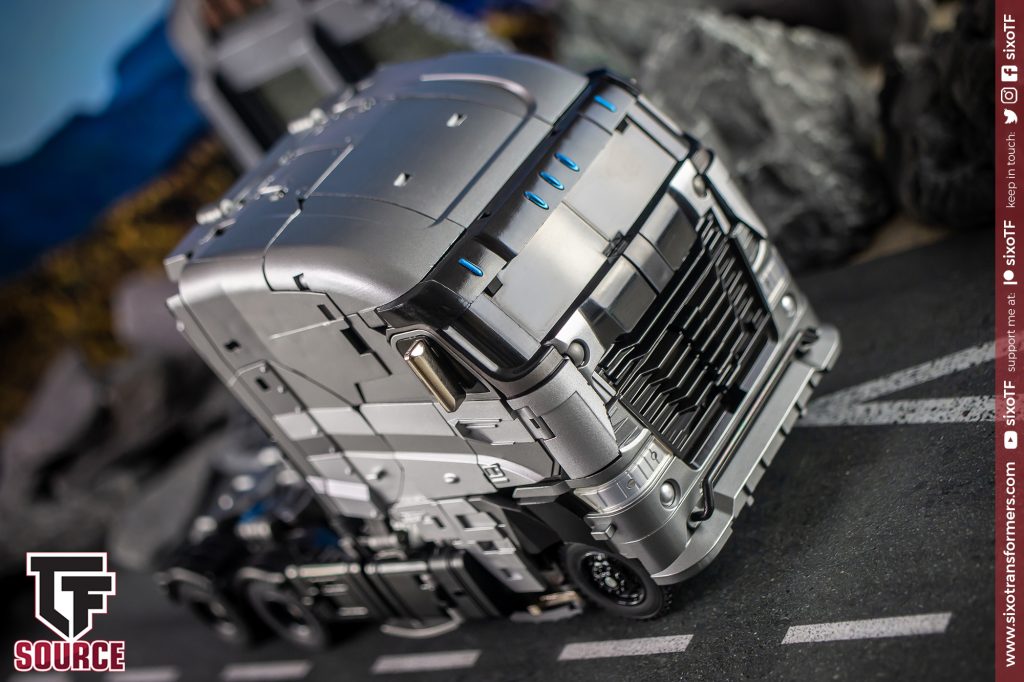 On the whole, though, this lad has a strong look and a sturdy feel, so I’d say it’s job done for the most part. There’s also some interactivity, as the doors do open, although the interior they reveal is little more than a mess of robot parts, so it’s purely for effect. 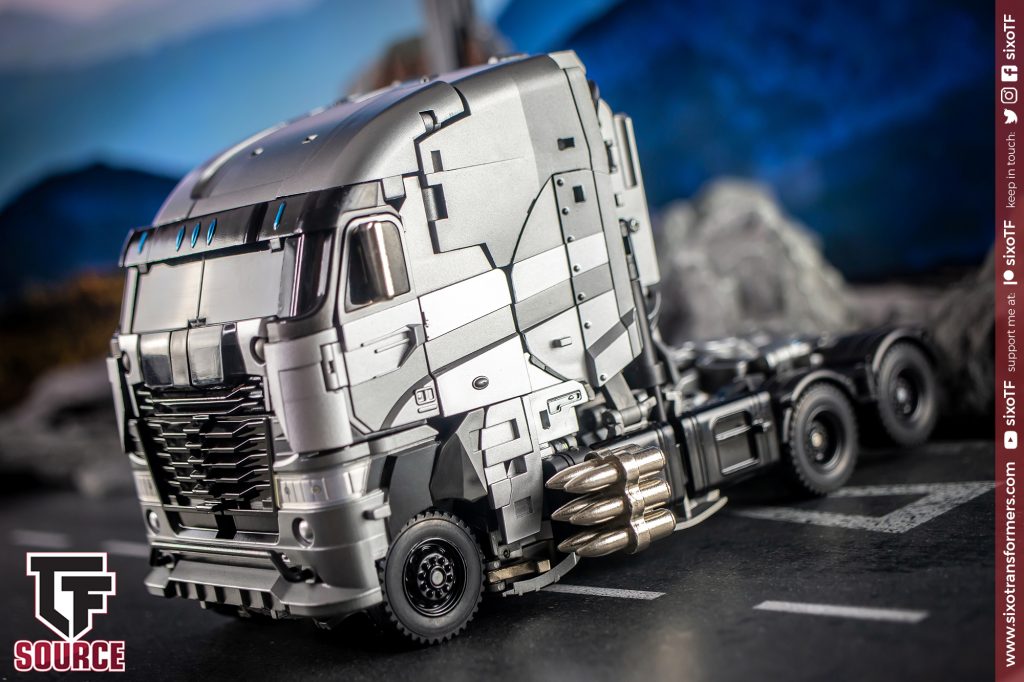 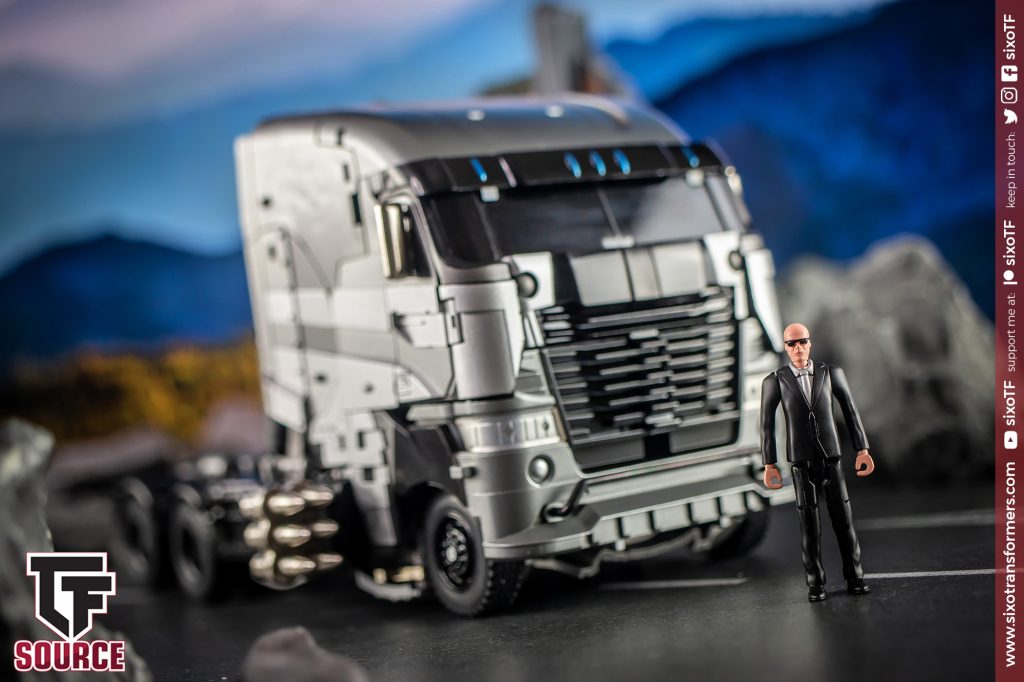 Then you have a more curious inclusion here – a human minifigure that is clearly meant to represent Stanley Tucci’s character, except honestly, it’s hilarious. By this point, I can only say that Unique Toys knows how to craft a ludicrously complicated transforming robot in their sleep but ask them to produce a non-terrifying flesh and blood character? Nah. 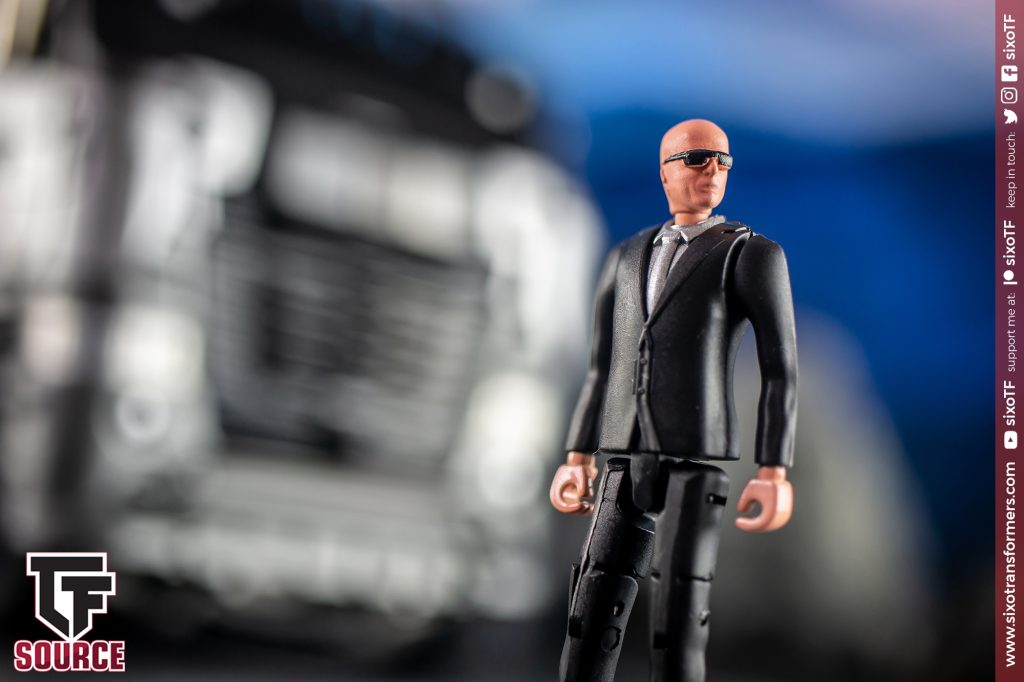 Let’s put aside that it doesn’t even resemble Mr Tucci in any way (if anything, I get serious Peter Weller’s Robocop without the helmet vibes…) and acknowledge that everything about it just a bit naff, from the weird proportions to the awkward sculpt to… those… hands… Overall, it’s best left in the box, in my opinion. 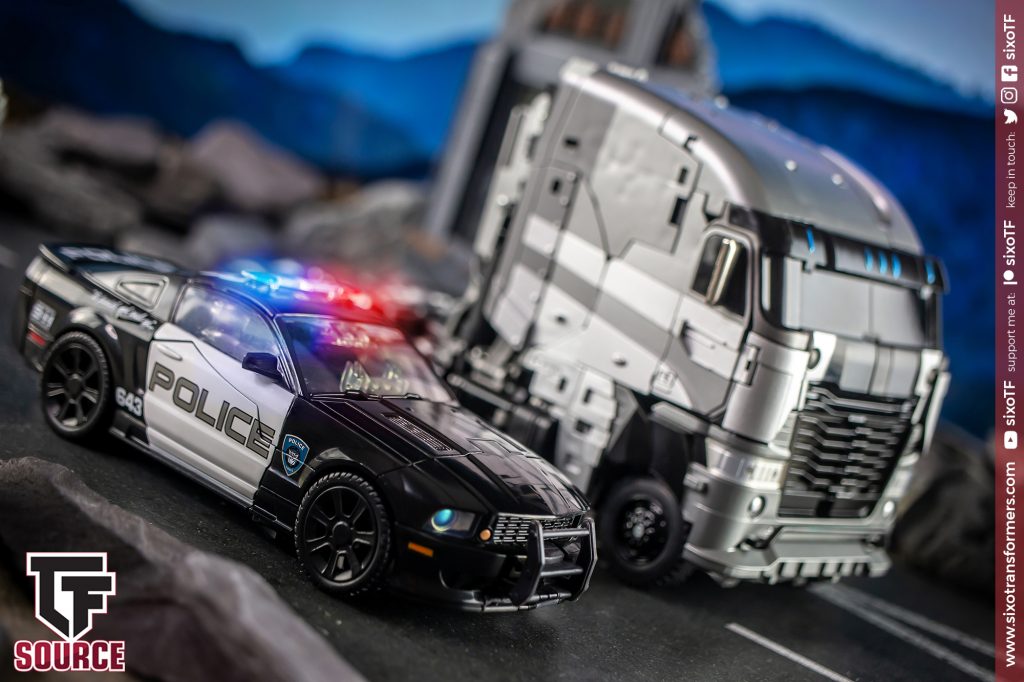 Never mind, though; it’s one slightly humourous piece in an otherwise exceptionally well-executed puzzle, with Nero presenting very strongly in his vehicle form for now. Sadly the rest of the Age of Extinction Decepticons (such as they are) are rather underrepresented for the moment, but he makes a fitting accompaniment for the few official MPM examples we’ve had thus far. 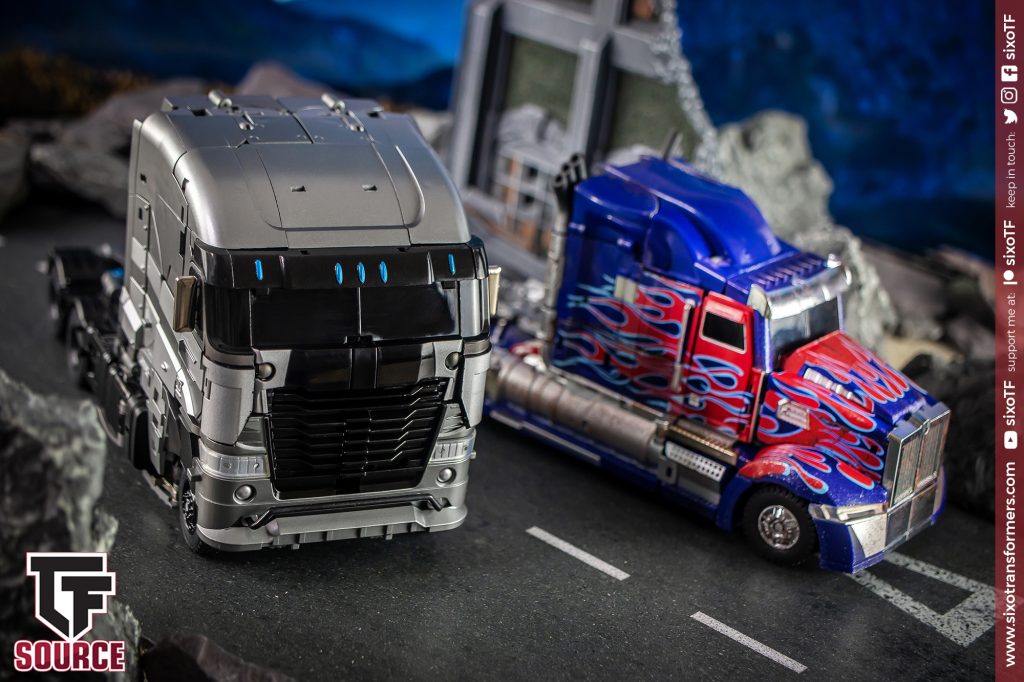 By my estimation, he’s also a fantastic counterpart to Unique Toys’ own Optimus Prime effort, Challenger, and the two line up exceptionally well together. Again, the company has capably demonstrated that they have a firm handle on designs like this, but it’s still enjoyable to see this pair of characters realised so well. 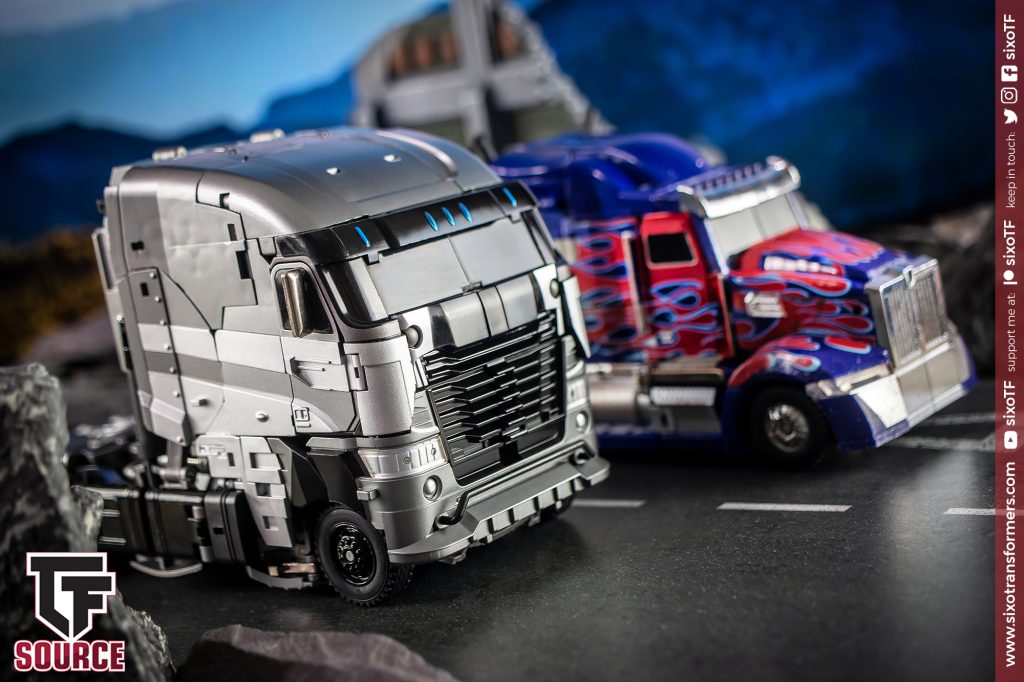 Galvatron may not have amounted to much in the film itself, but hey, at least now you can craft your own adventures, I suppose! It’s hard to imagine that anyone else will top this double-act any time soon. 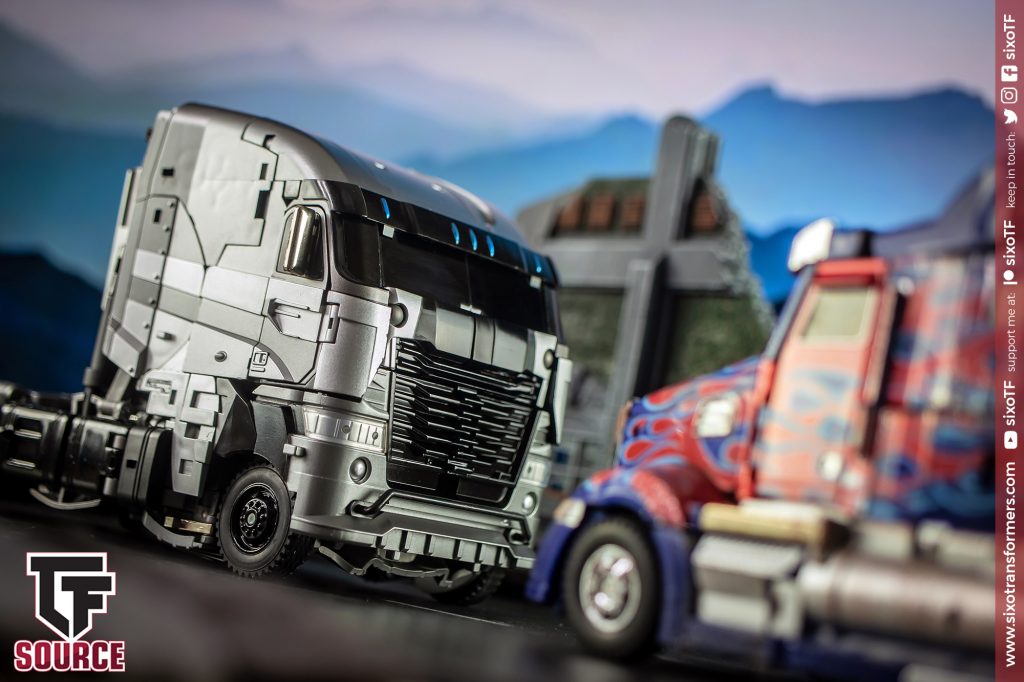 It’s another solid first impression from Unique Toys, then, with a vehicle form that arguably does this particular character more justice than even the film we first saw him in. I love a good truck and this does not disappoint. 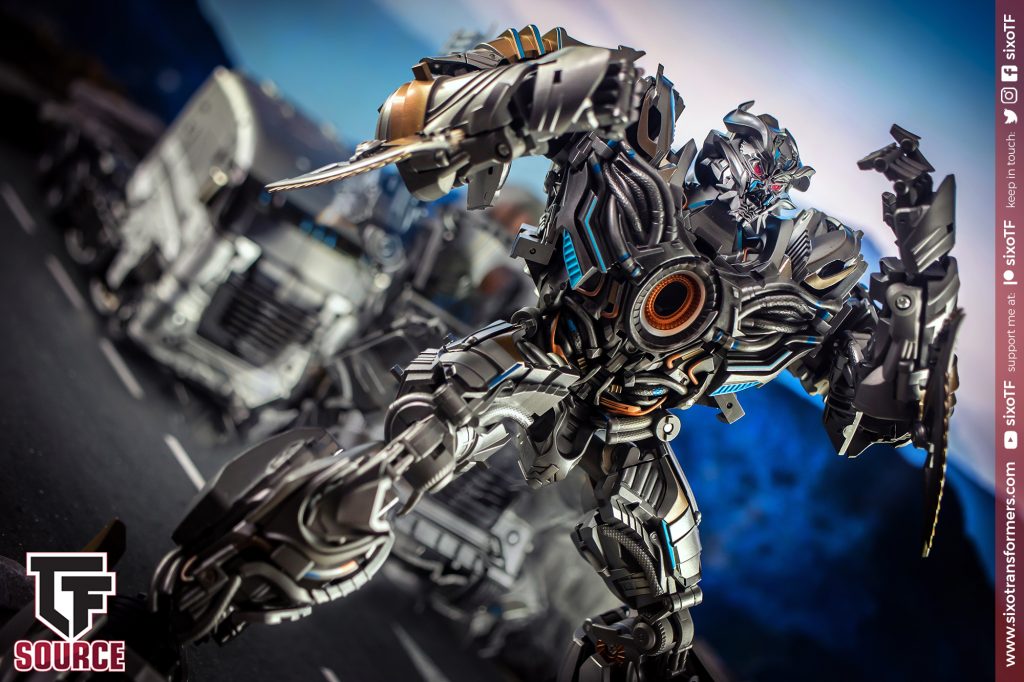 Join us for the next part when we’ll get Nero transformed into robot mode!