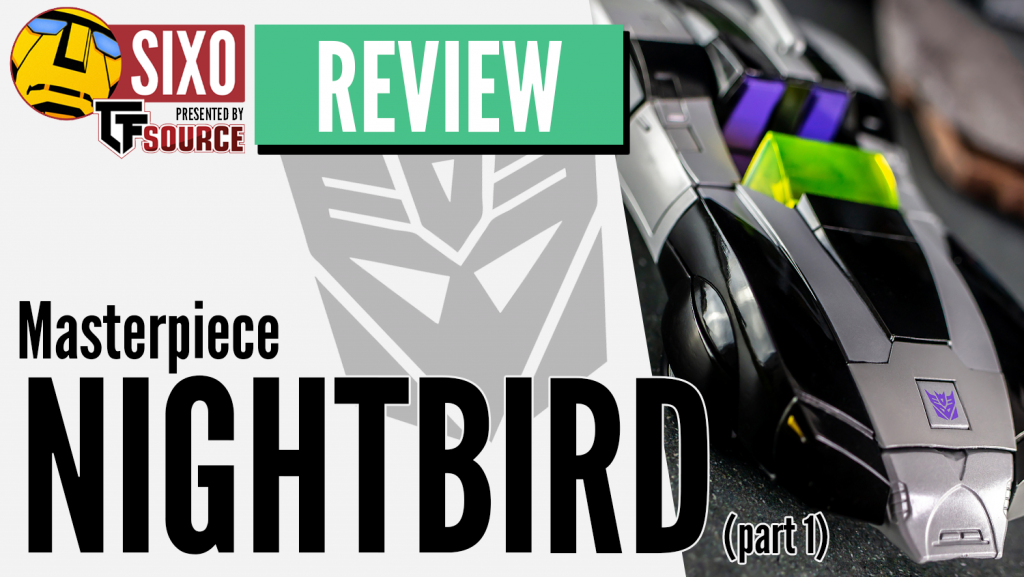 I love Transformers toys of all different kinds but let me be honest, nothing gets my motor running quite like a new TakaraTomy Masterpiece release. Yes, they sometimes have their quirks, but by and large, there always seems to be something to marvel at whenever they arrive in hand.

The subject up for perusal today is a little different, however. MP-55 ‘Nightbirdshadow’ (to use the toy’s full name) represents a character originating from the 1980s Transformers cartoon. This sets it apart from your typical Masterpiece fare, which might ape the animation in terms of aesthetic but always has some sort of original toy to back it up. By taking this step, TakaraTomy has entered a world more commonly explored by third party designers and has produced what is potentially one of the more unusual repaints of the line thus far (outside of some of the Atmos MP-10 repaints and the like, perhaps).

I am going to photograph the shit out of this. pic.twitter.com/9BMXnlwblh

In contrast to how Nightbird was initially portrayed, this toy is a bit of a departure, especially given she was a human-created non-transforming ninja robot in the cartoon. Still, I’m always up for something a bit different and besides, I was a major fan of the Masterpiece Arcee design, so why not give it another go, eh? 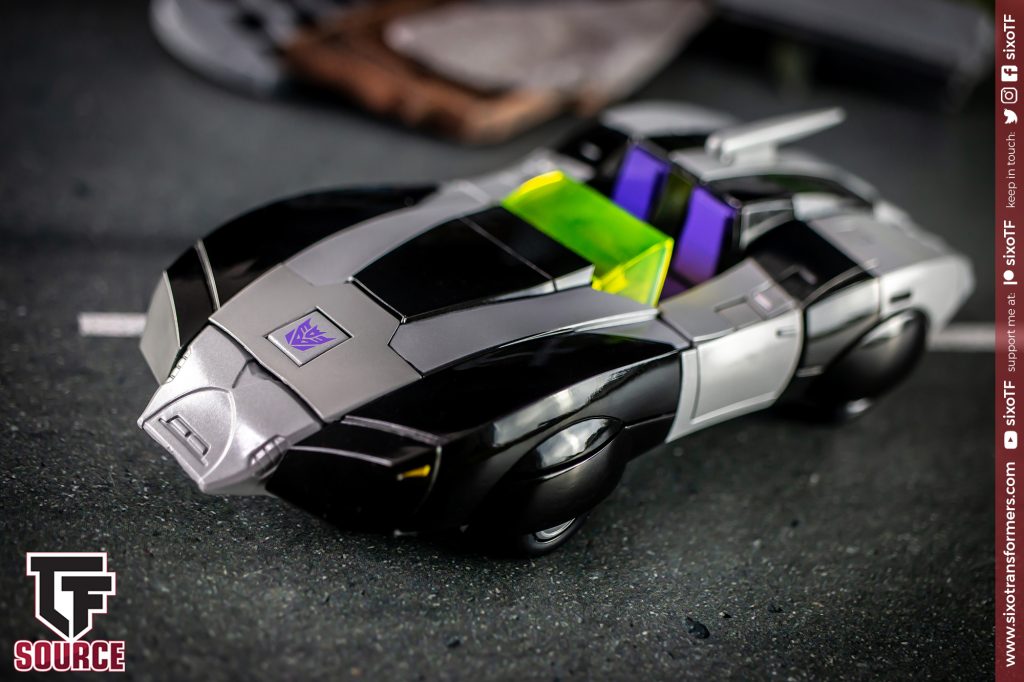 Of course, we start off in the car mode, which may not be the most familiar aspect of this figure in terms of portraying the character in question, but it is still a wonderful sight to greet you out of the box! Of all the many criticisms that MP-51 came in for from collectors, I don’t believe the vehicular form was one of them, and needless to say, it looks nothing shy of sublime here with a sultry black and grey makeover. 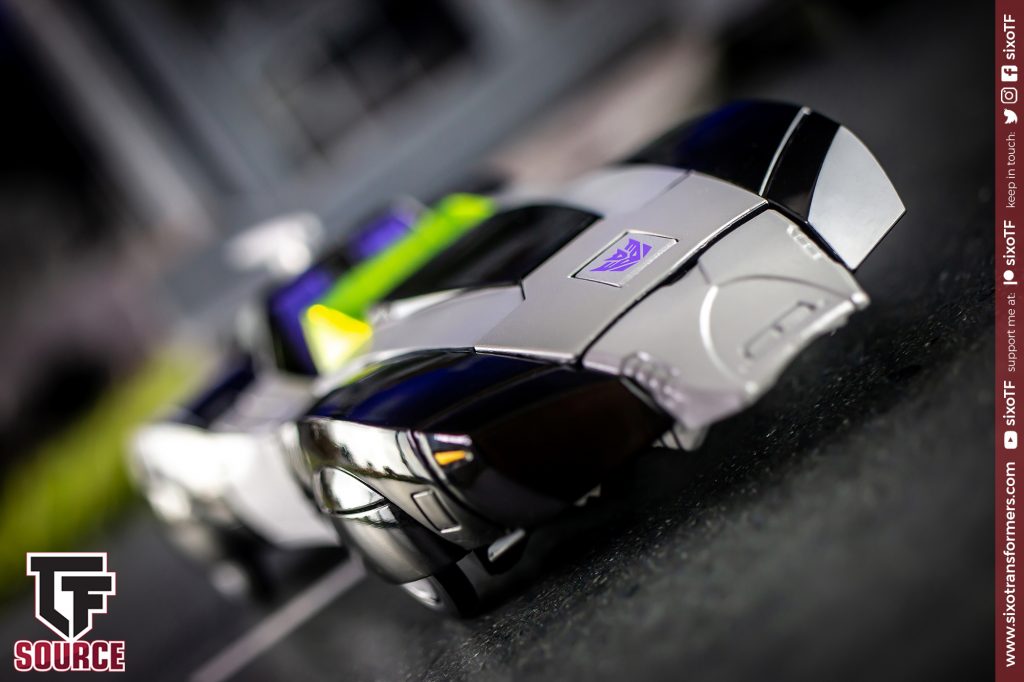 This mode does have precedent, mind, with the Legends version of Nightbird already having been cribbed off the equivalent Arcee figure. Still, it’s a treat to see it realised in full-on Masterpiece form and, just as with Arcee, the car is exceptionally sleek and well put-together, boasting smooth lines and all the various panels clipped together nice and flush overall. 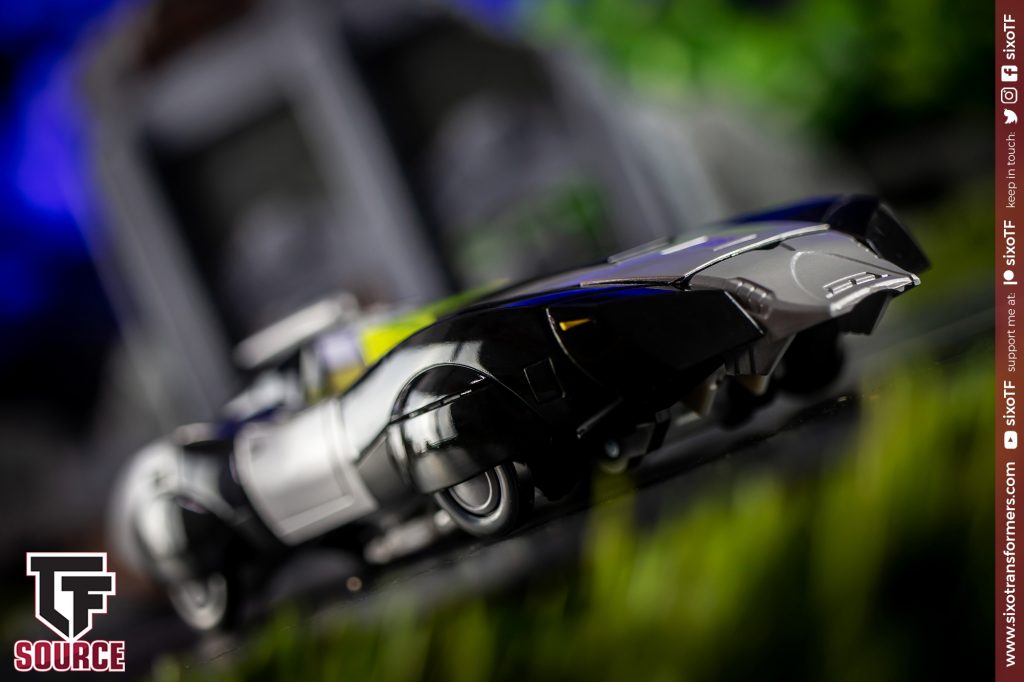 I found that my copy needed a fair bit of readjustment right out of the box, though, with some of the under-car robo-kibble being assembled in a fashion not entirely conducive to allowing the four wheels to sit stably on a flat surface. Still, after a quick fiddle, Nightbird is ready to win me over. 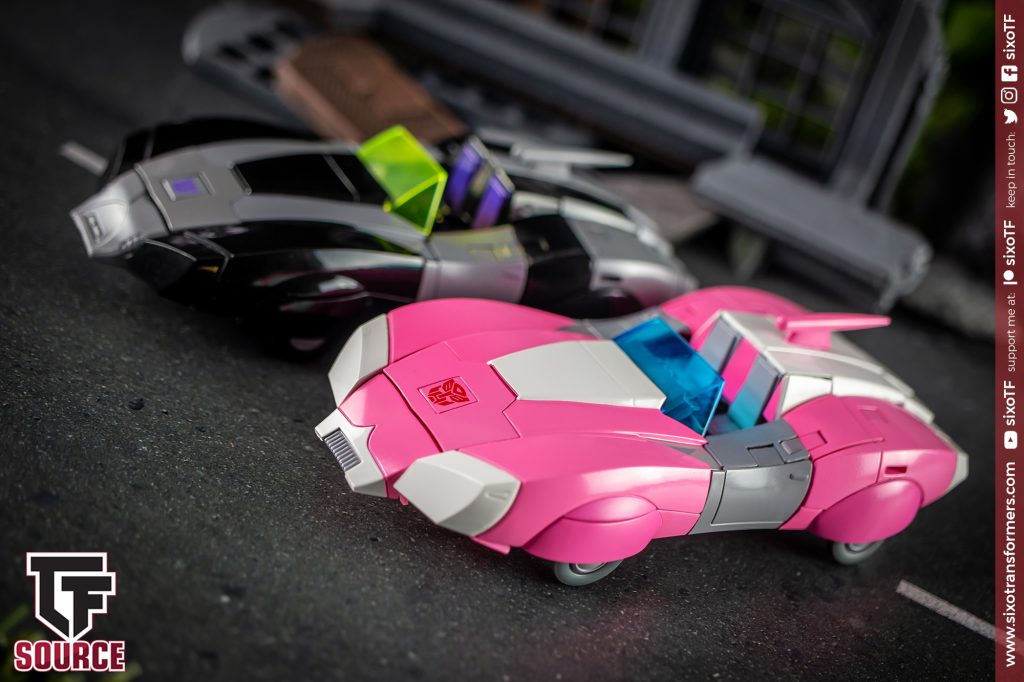 There’s something about this new paint job that just works, in my opinion, and I especially like that it’s not a straightforward colour swap from MP-51. The grey ‘stripe’ down the middle of the car adds quite a different feel and sets MP-55 apart a bit, to the point where you may even not clock this as a simple repaint straight off the bat. 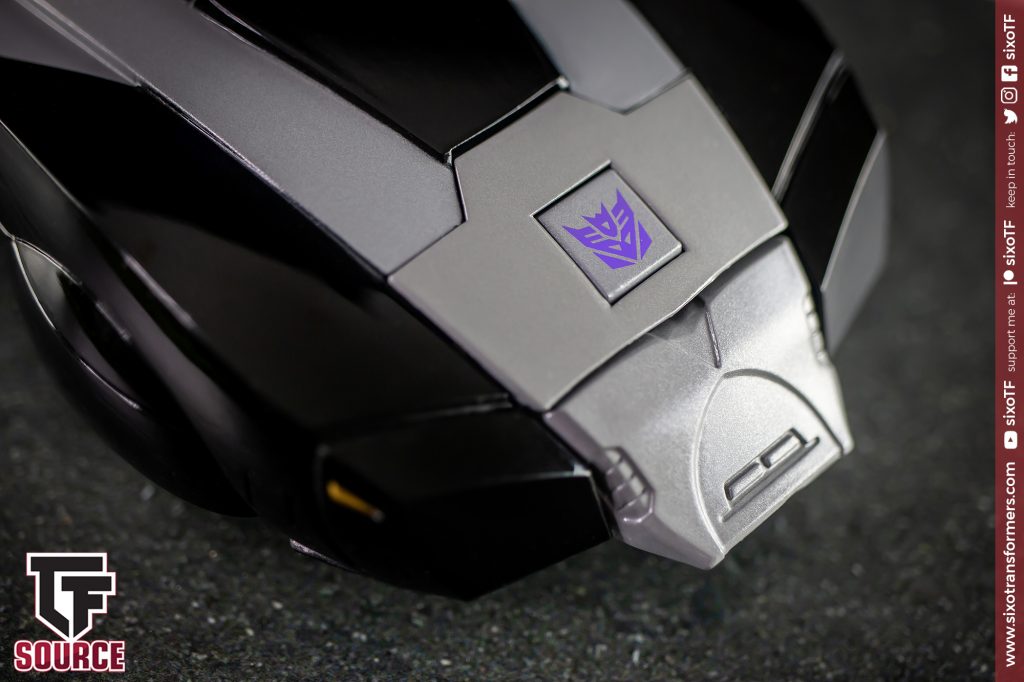 That said, there are some newly-moulded parts in action, although that front panel is the only real indication here of more being revealed later on in the robot mode. This part represents perhaps the most apparent break in the cohesiveness of this mode, but even then, it all works well, visually speaking. 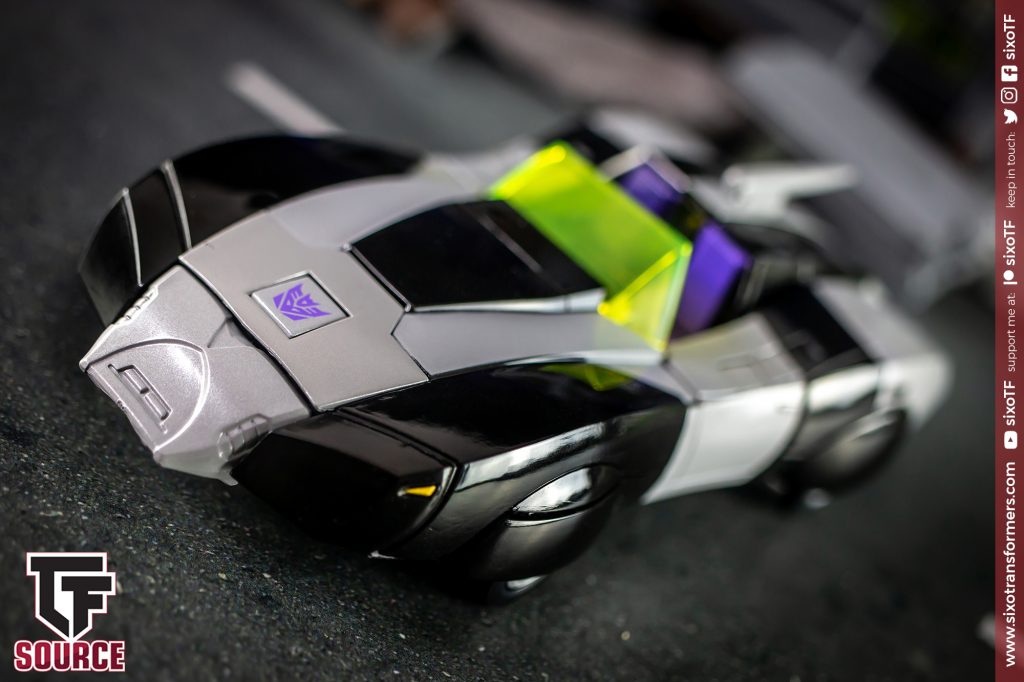 Naturally, one of the most significant points to discuss here is the neon green windshield and the accompanying bright purple seats, which do the heavy lifting in breaking up the otherwise fairly monotone colour scheme. It’s an inspired choice for something not found on the cartoon Nightbird design, especially as the Legends toy opted for a reasonably dull yellow by comparison. To my eye, the green brings the necessary zing. 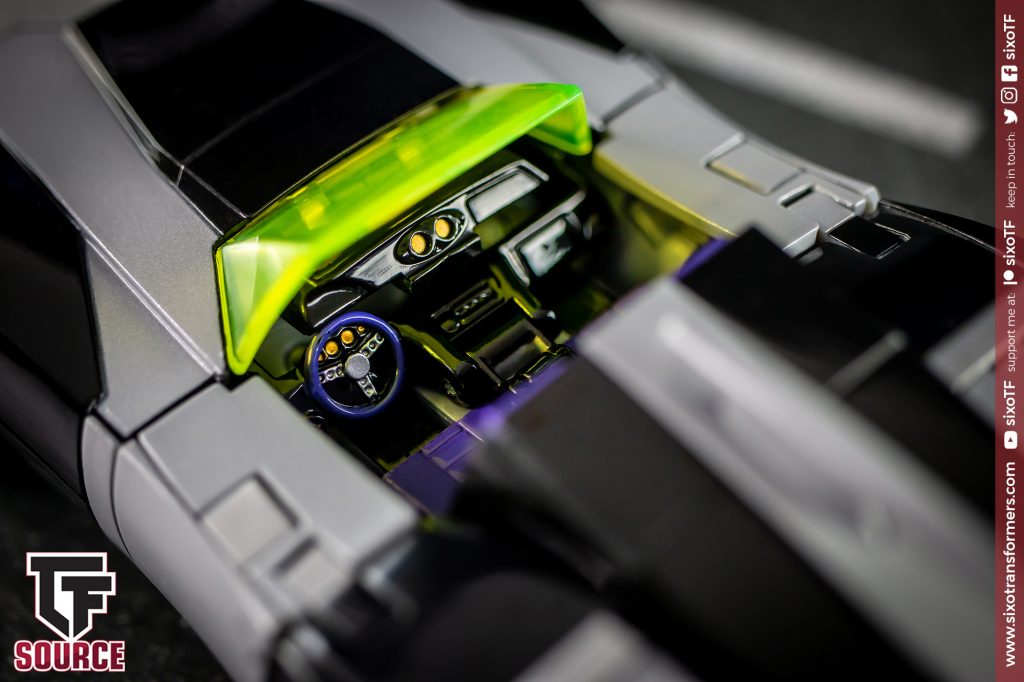 There’s also quite a bit of detail and some excellent paint applications to behold once you look inside the little interior section, with yellow, silver and purple highlights used to pick out the moulded intricacies. I love how the green of the windshield shines through and illuminates everything, reflecting on the black and grey sections rather beautifully. 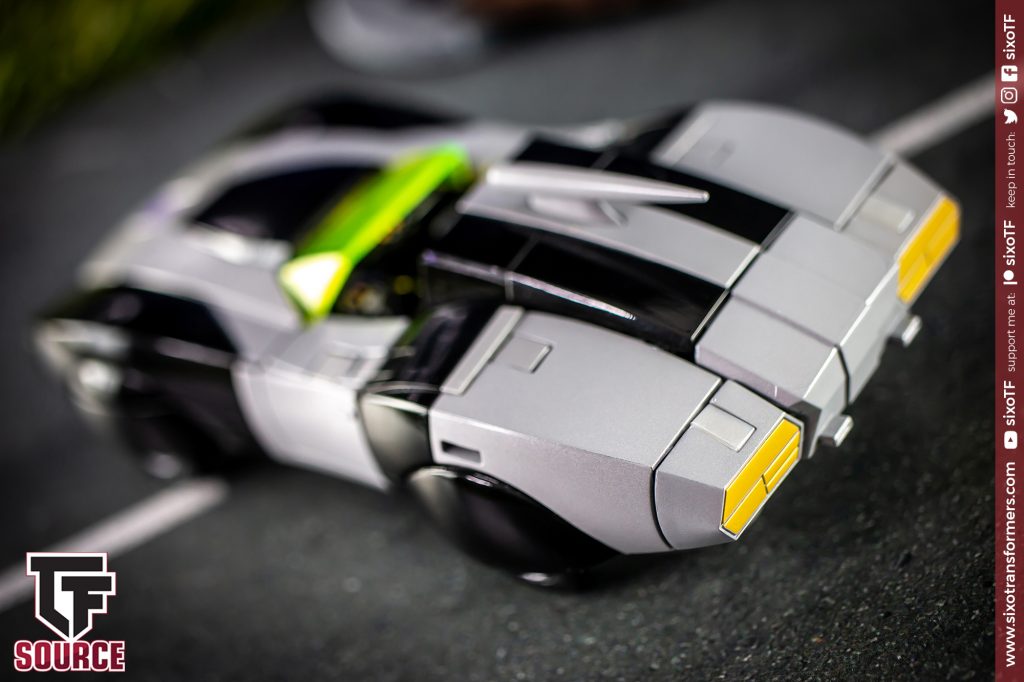 There’s more colour to the rear, with some popping painted yellow taillights capping off a striking colour scheme overall. There may be little here to tie this design to the original character thus far, but damn, it looks exceptional all the same! 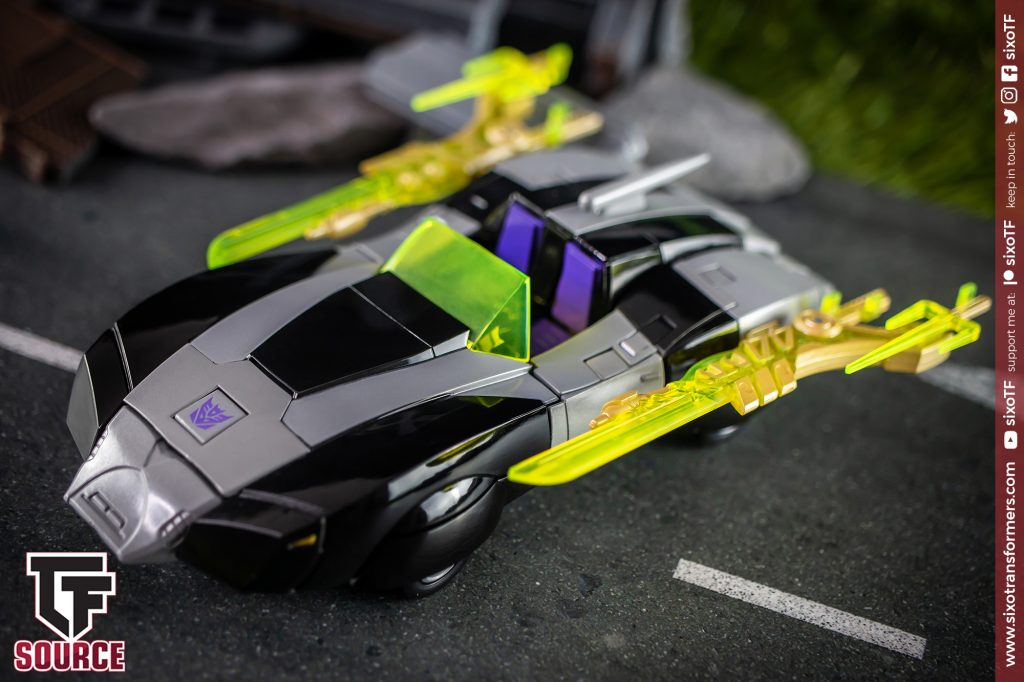 Still, whatever the case, it does look kind of neat and at least creates a bit of visual interest! Should you prefer, you can equally add the ‘lightsaber’ weapons included in the box to the same spots, although this feature isn’t actually mentioned in the instructions. 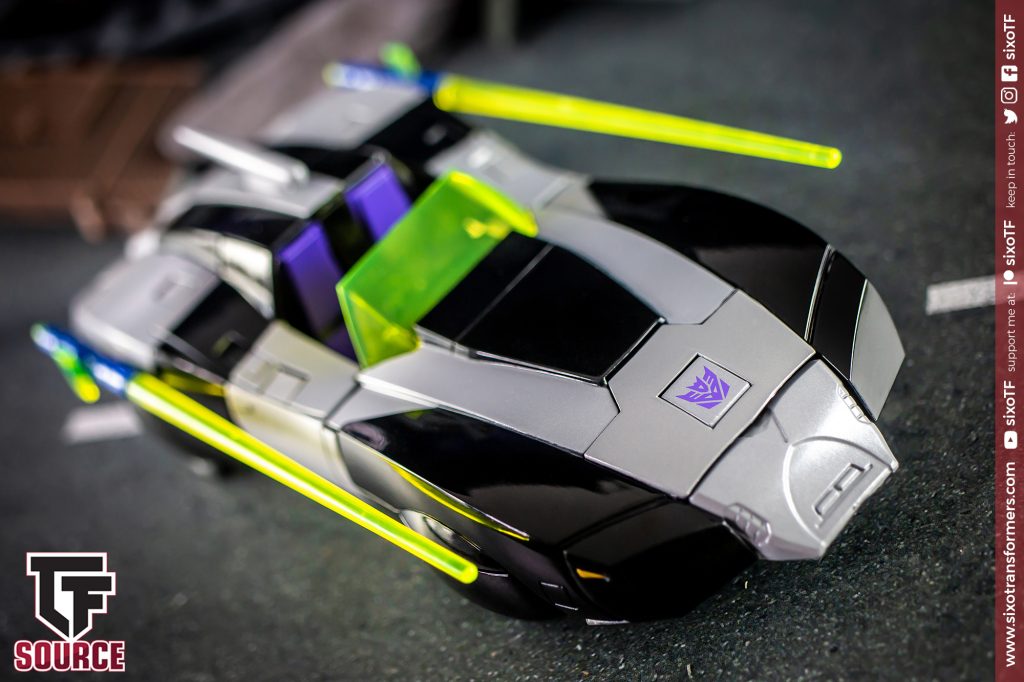 Overall then, this car mode is all win, in my opinion. I was already well enamoured with its design from Masterpiece Arcee, yet there’s nothing like a sleek and sexy black makeover to impress, is there? 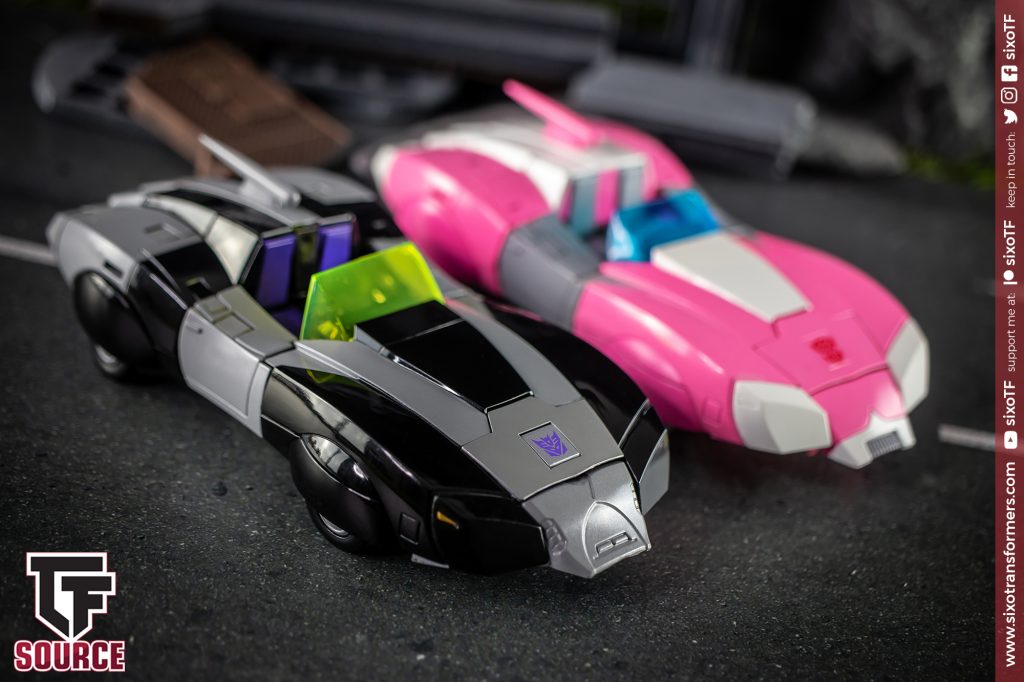 Again, it’s quite amazing how distinct the two of them feel, even if logically, there aren’t many moulded changes to note thus far. Those differences will only become more apparent as our assessment continues but for now, I think the designers have done a brilliant job at interpreting a suitable car form for this character. 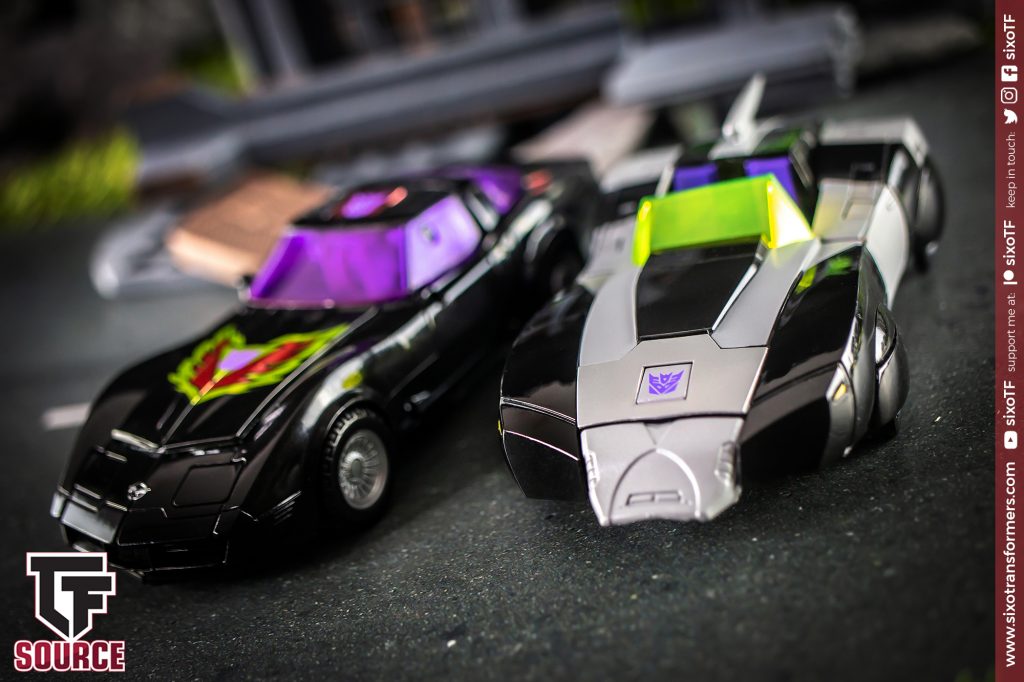 Dare I say, she also makes an incredibly fitting accompaniment for MP-25L Loudpedal. That toy’s own purple windshield and greenish-yellow bonnet decal make the perfect counterpoint to Nightbird’s appearance. These characters have both been reinterpreted for the Masterpiece line in their own way, and somehow, I can’t help but see them as a very fitting double-act of sorts, despite no real indication that should be the case! 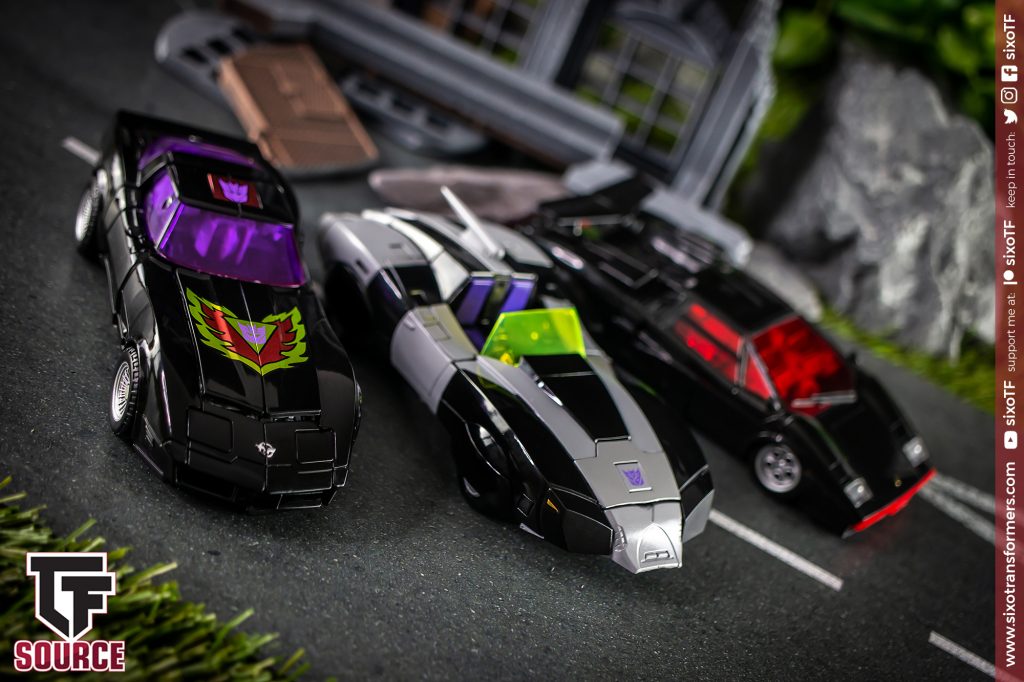 And hey, while we’re at it, why not throw in MP-12G G2 Lambor for comparison too? Something about black repaints with brightly-coloured translucent windshields obviously appeals, I think. All of these have precedent in different ways, of course, but it does make me wish we’d see more of this sort of thing! 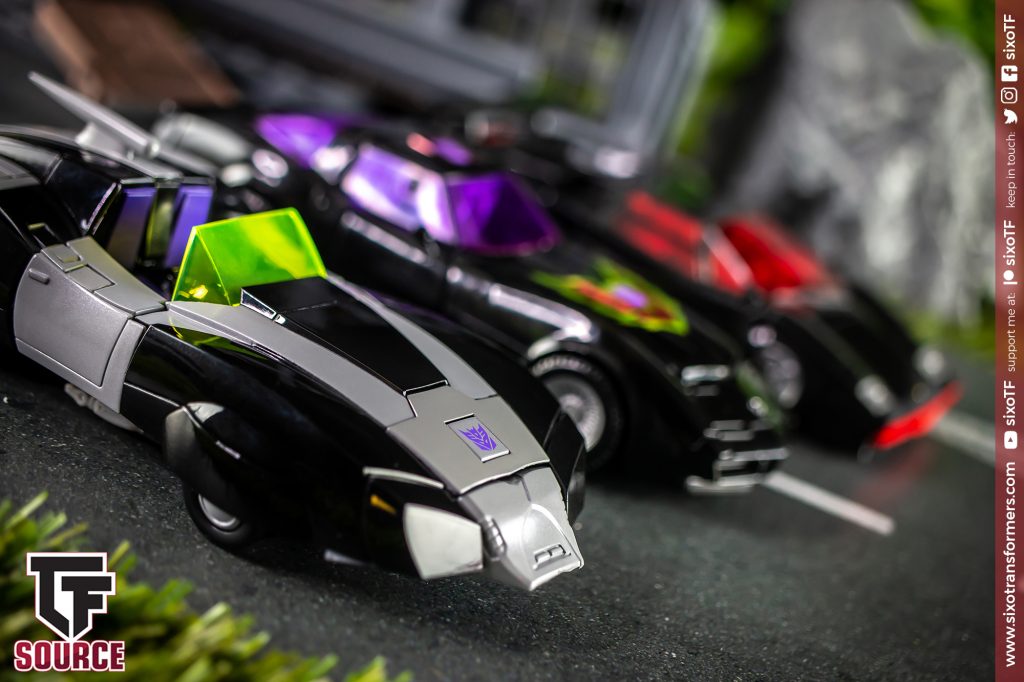 Anyway, if you were worried about giving Nightbird a vehicle mode, rest assured MP-55 presents so wonderfully that I don’t believe you’ll be quibbling the premise for too long. If anything, she’s here to show you just how repaints of this kind should be done. 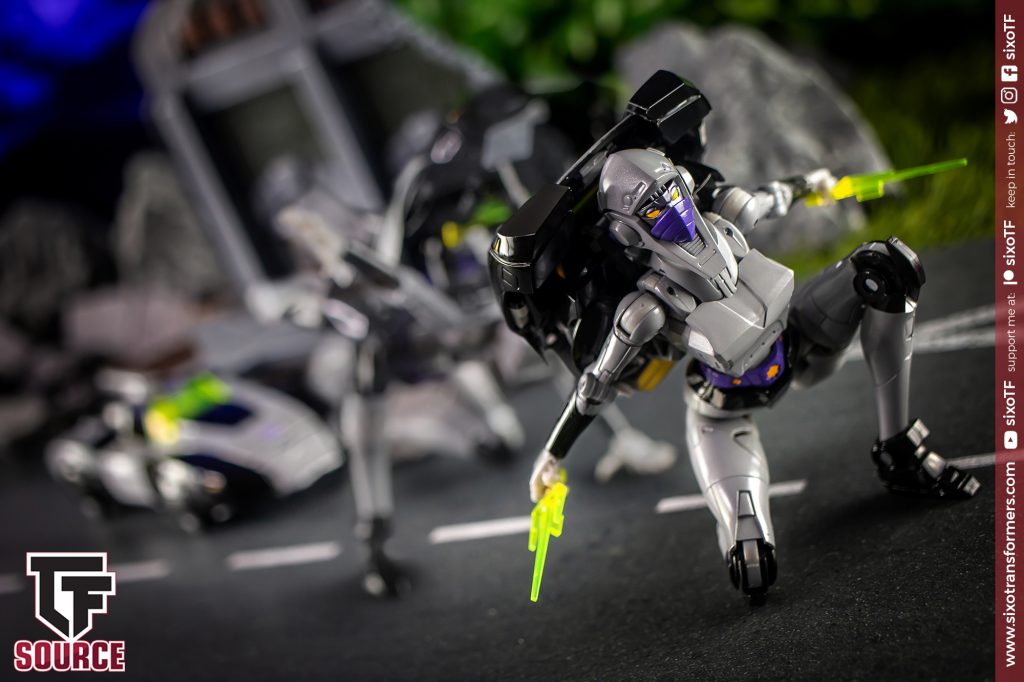 Join us for the next part when we’ll get her transformed into robot mode!