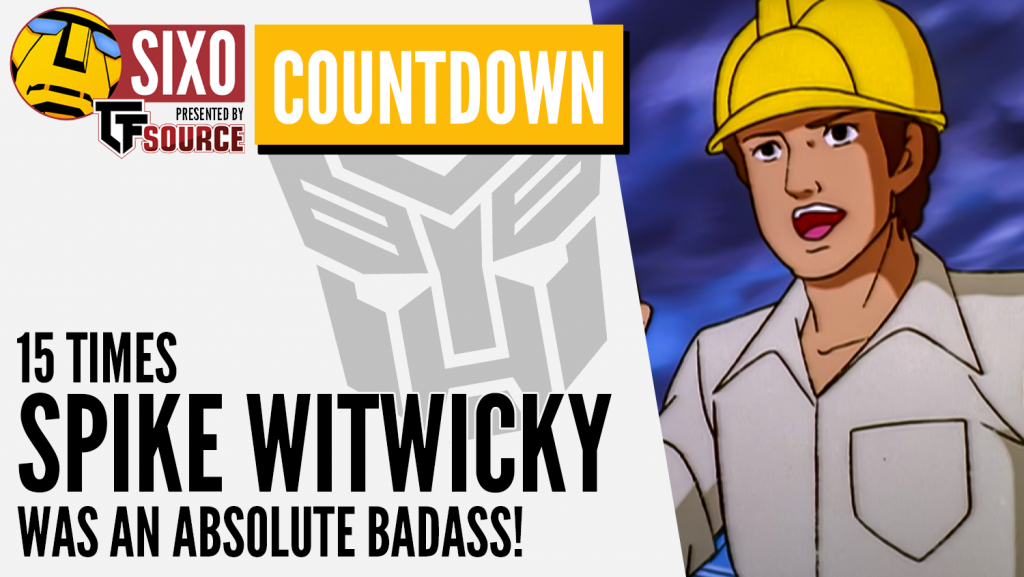 Human characters in Transformers are often remembered in less than favourable terms. There are plenty of fans who would rather the robots in disguise had adventures without the need for Earthern allies to accompany them in every cartoon or other piece of media!

Whilst sometimes that’s fair, there are also plenty of examples of fantastic (and very helpful!) human characters from the franchise’s fiction over the years, and as one of the first examples, Spike Witwicky is also the real essence of that. To prove it, here are 15 moments from the Generation 1 Sunbow cartoon where Spike was an absolute badass (presented in order of badassery)!

#15: Repairing Skyfire (Fire on the Mountain) 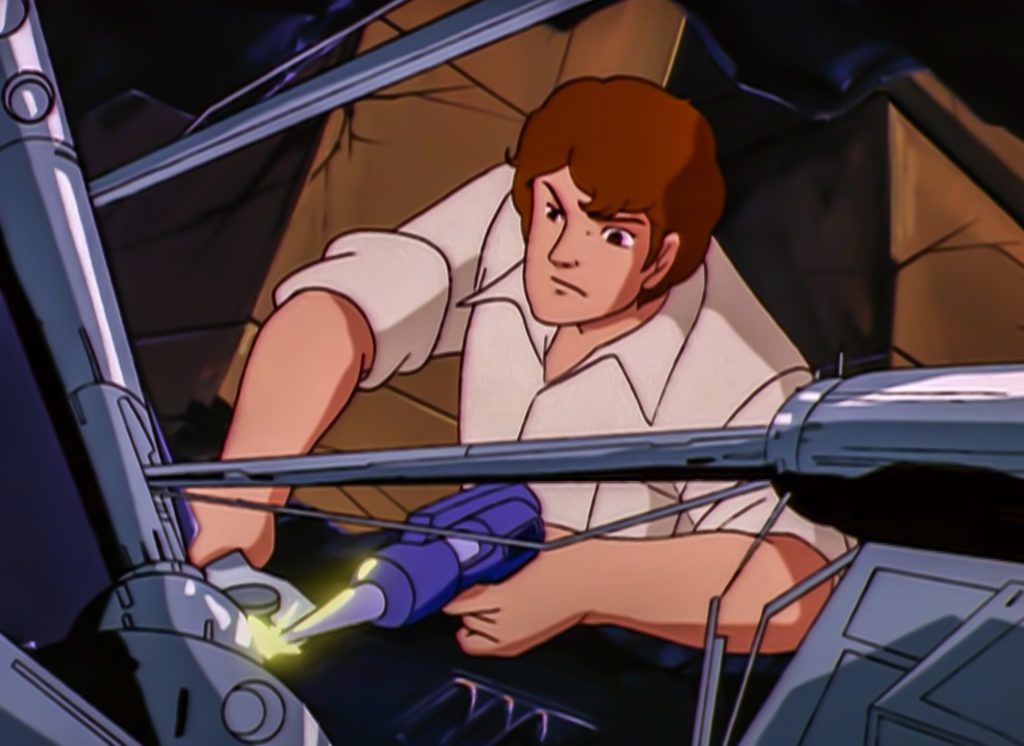 After Skyfire is incapacitated by Starscream, it looks as though the Decepticons are set to win the day, but Spike is having none of it! Despite Ravage bearing down on them, he calmly sets about repairing his fallen Autobot comrade whilst Bumblebee keeps the cassettebot busy. He mentions the repairs might be beyond his ability but that doesn’t stop Spike, as he brings Skyfire back online just in the nick of time. 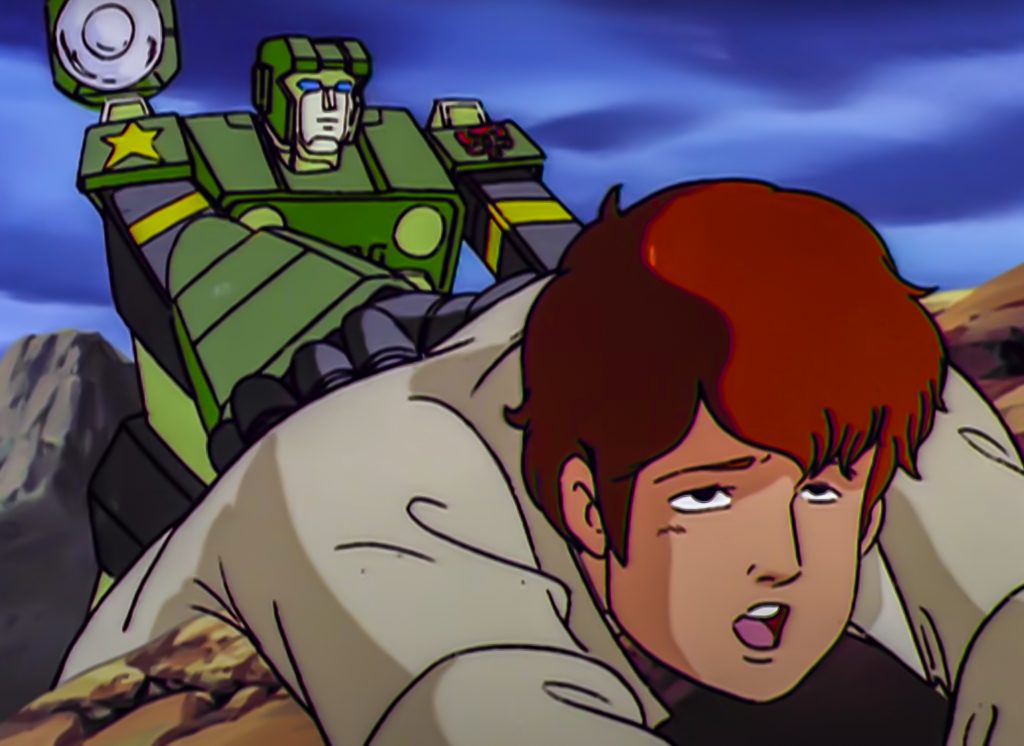 Though still in his early days hanging out with Autobots, Spike quickly proves to be a valuable asset. When Hound is trapped at the bottom of a river following a battle with Rumble at Sherman Dam, the boy dives into the choppy waters without a second’s thought and manages to free his friend. True, he needs a bit of help from Hound afterwards but hey, that led to one of the most memorable (and memeable!) images in Transformers history…

#13: Hurling the grenade (The Autobot Run) 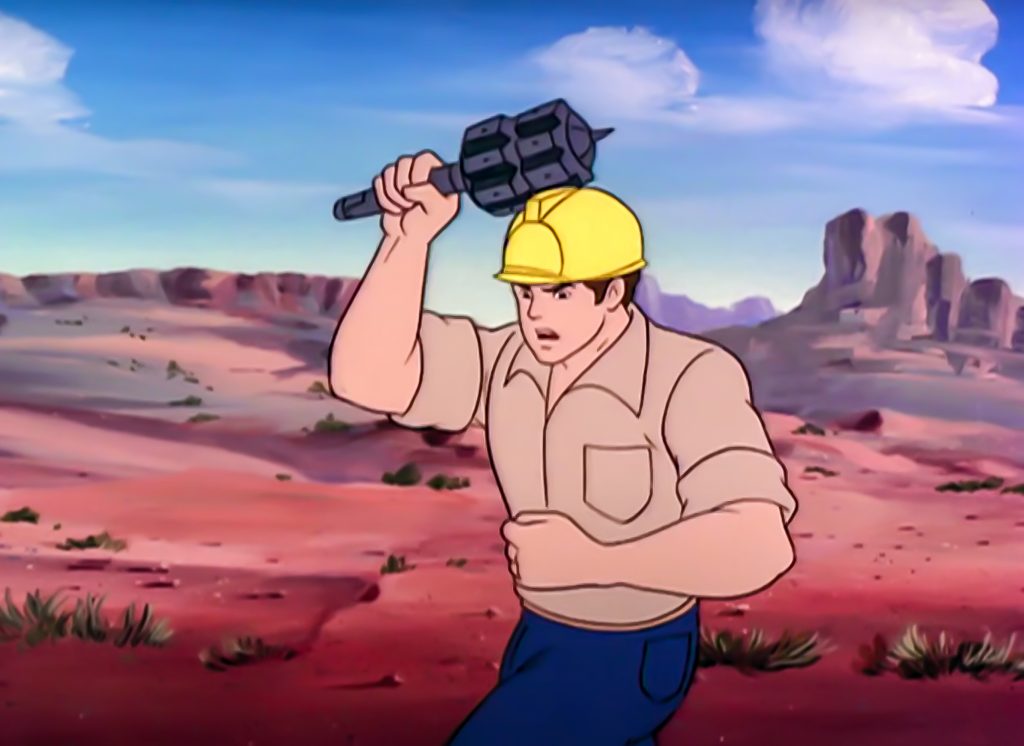 With the Autobots all stuck in their vehicle modes thanks to a Decepticon plot, it seems like a solution may be on hand after Wheeljack and Ratchet create a grenade that will counteract the effect. Spike and Chip arrive to get it working but there’s just one problem… Soundwave it swiftly chasing after them! Never one to be intimidated, Spike stands his ground and initiates a game of ‘keep away’, the daring young sod. 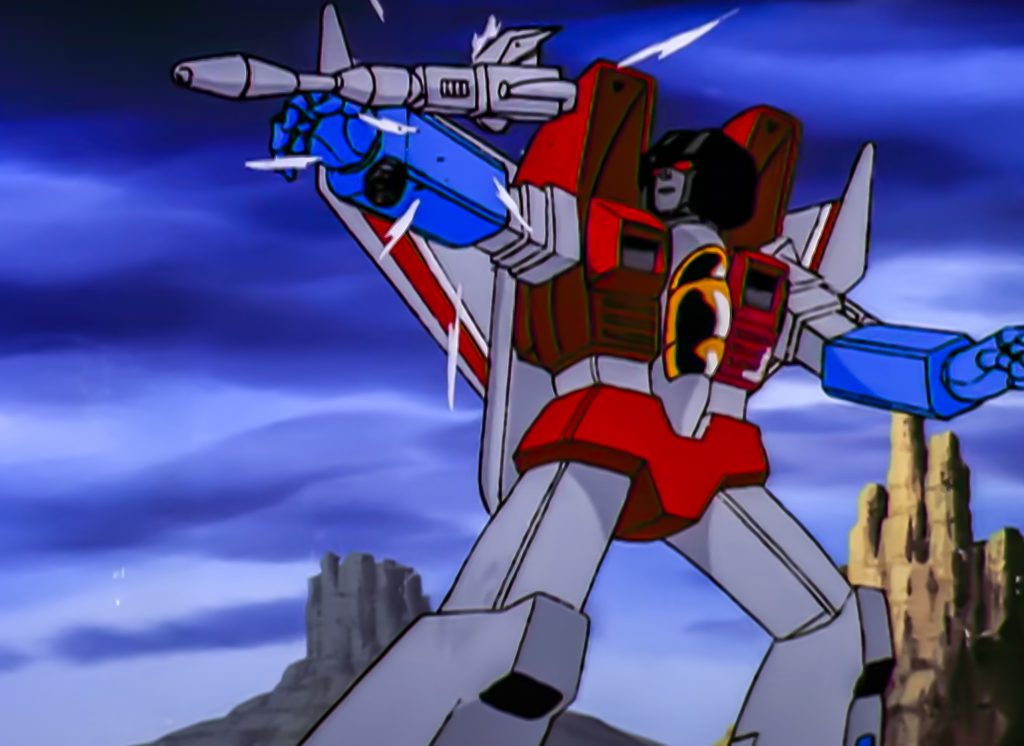 It isn’t long into the cartoon before Spike is getting embroiled with full-scale Autobot battles, such as when he volunteers to take part in stopping the Decepticons from boarding a spaceship and winning the day. Optimus Prime and Megatron come head-to-dead during the fight whilst Starscream seeks to take advantage and shoot the Autobot leader in the back… before Spike swiftly stops him by throwing an expertly-pitched rock in his direction! What an arm. 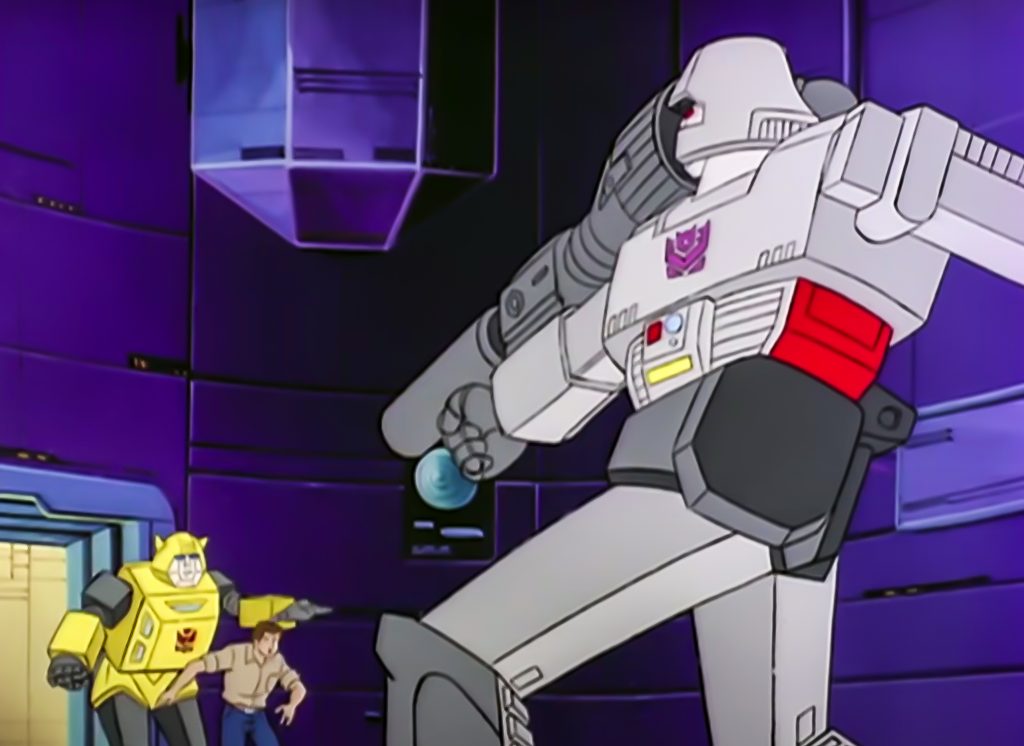 In one of the episodes where the Decepticons came closer to victory than ever, they conquer New York City and turn it into a new fortress. Spike and Bumblebee are instrumental in saving the day after they creep inside Megatron’s command tower and goad the Decepticon into repeatedly firing on them, destroying his own controls in the process. What a dummy!

#10: Rescuing his dad from Cybertron (The Ultimate Doom part 2) 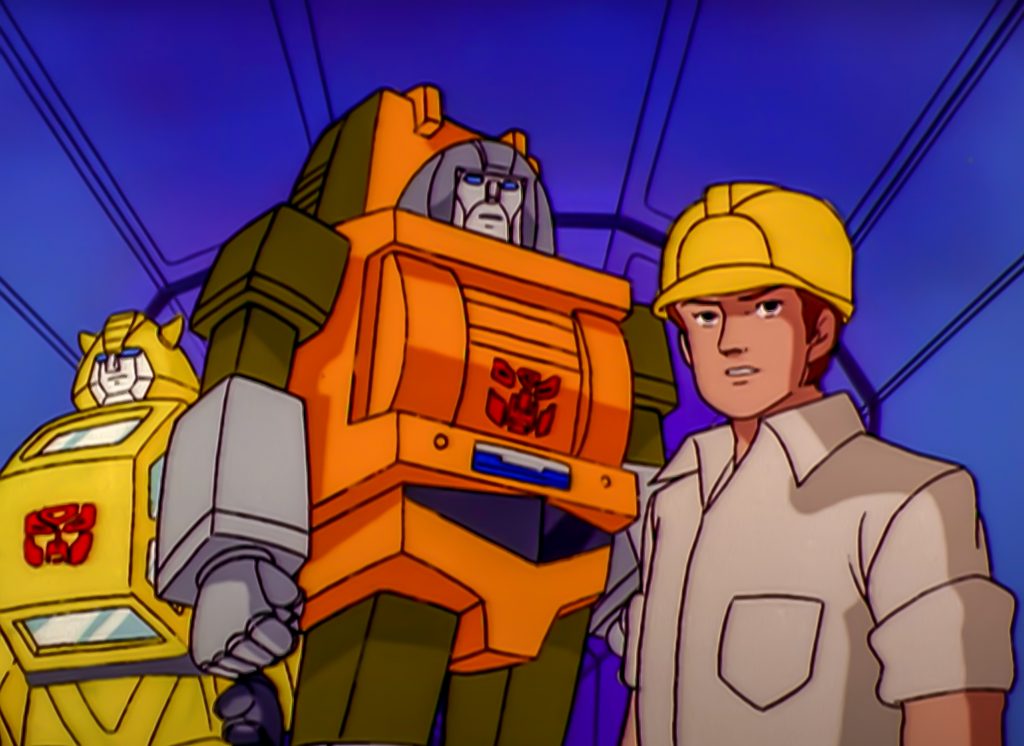 Spike would travel to Cybertron many times during his adventures alongside the Autobots but the first instance was certainly one of his most heroic. With his father, Sparkplug having been mind-controlled by the Decepticons, Spike pleads with Optimus Prime to let him travel to the alien world to rescue him. Optimus reluctantly agrees and sends an Autobot strike team along for the ride, as Spike proves once again that nothing will stop him from protecting those he cares about. 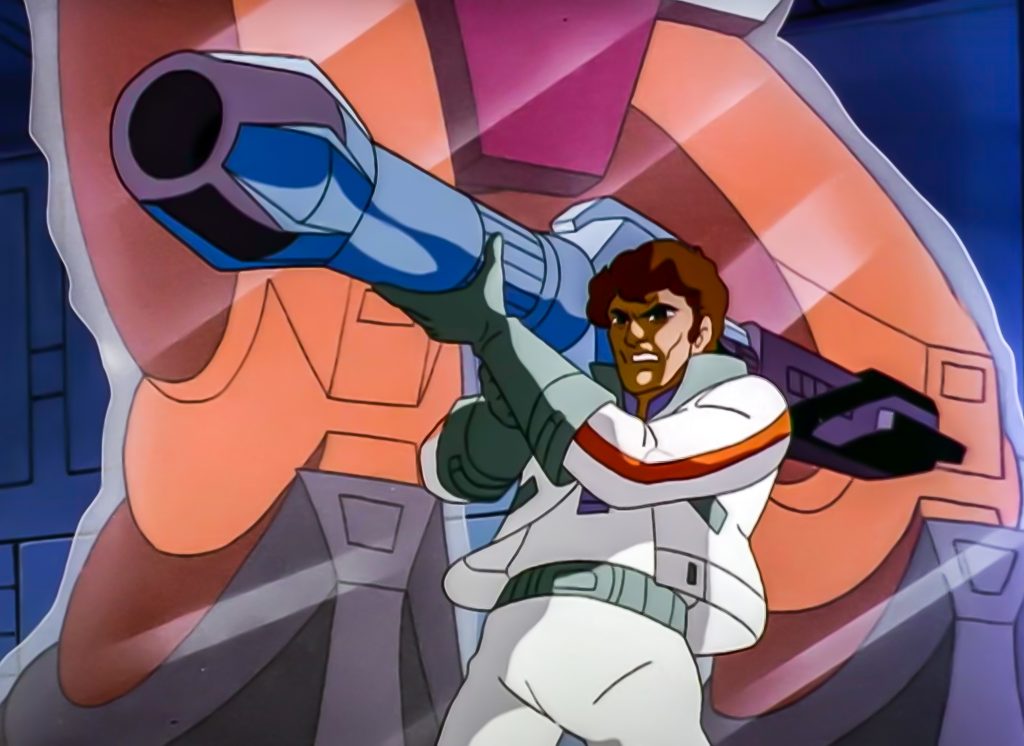 By season three, the future timeline of, ahem, 2005 sees Spike having grown up and become a dedicated part of the Autobot’s intergalactic operation. This means he’s more regularly getting into all kinds of dangerous situations, yet his heroism is exemplified when it seems the Quintessons have retaken Cybertron in a surprise victory. With Rodimus Prime and Galvatron incapacitated, it’s down to Spike to save the day once again as he grabs Rodimus’ weapon from his hands and manages to free them both.

#8: Standing up to Unicron (The Transformers: The Movie) 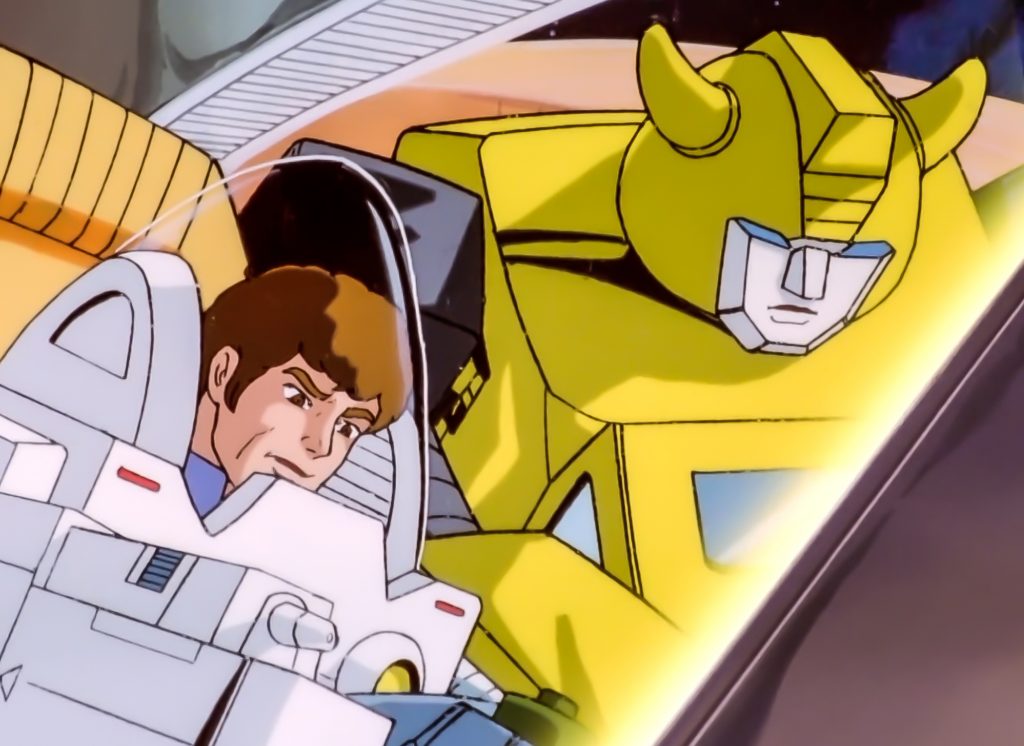 Spike wasn’t present throughout everything happening in the 1986 movie but his scenes all carry a lot of weight and showcase how much he’s grown since season two. With Unicron having just devoured Moonbase One (and seemingly Jazz and Cliffjumper), he was now heading directly for his second course with Moonbase Two. Spike and Bumblebee staged a daring escape plan by blowing the entire moon up in the Chaos Bringer’s face which, whilst it turned out to be unsuccessful, you have to admit is incredibly bold. Oh, and Spike delivers the series’ one-and-only s-bomb, the naughty devil. 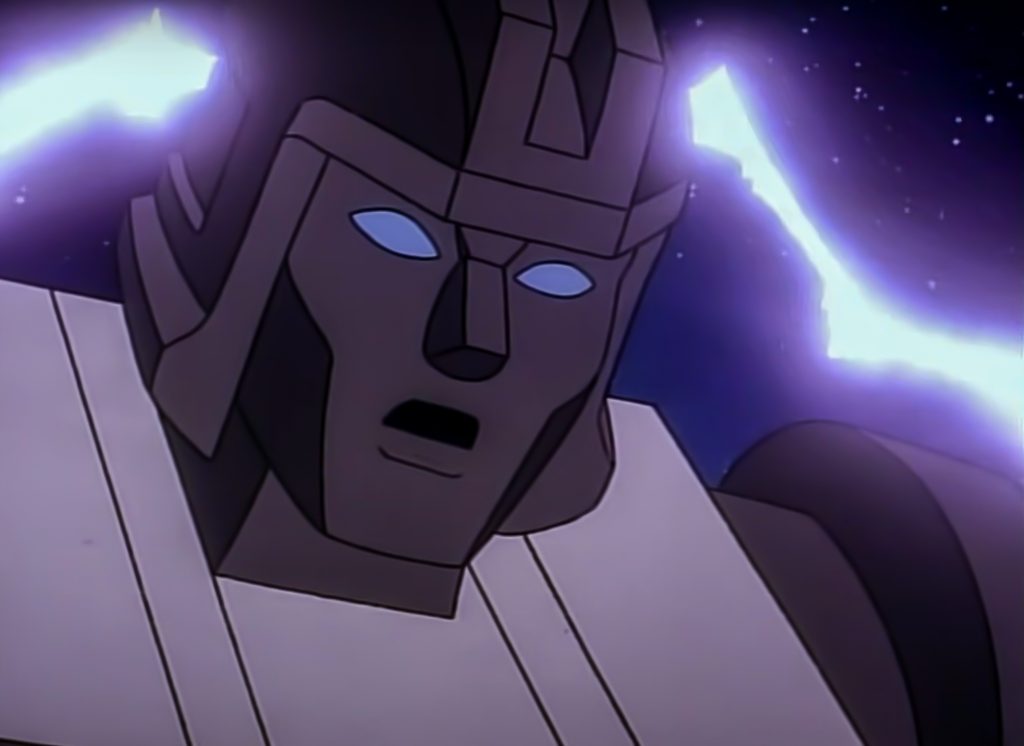 The stakes are rarely higher than the end of The Rebirth three-part finale, with every Autobot on Cybertron out for the count and close to destruction thanks to an overloading plasma energy chamber. With no robotic help left and the sun about to go supernova, it’s down to Spike and his new Nebulan allies to save the day, enacting his plan to convert a giant rocket into a syphon for the excess solar energy. Oh and bonus points for ushering in the next Golden Age of Cybertron. Y’know, no big. 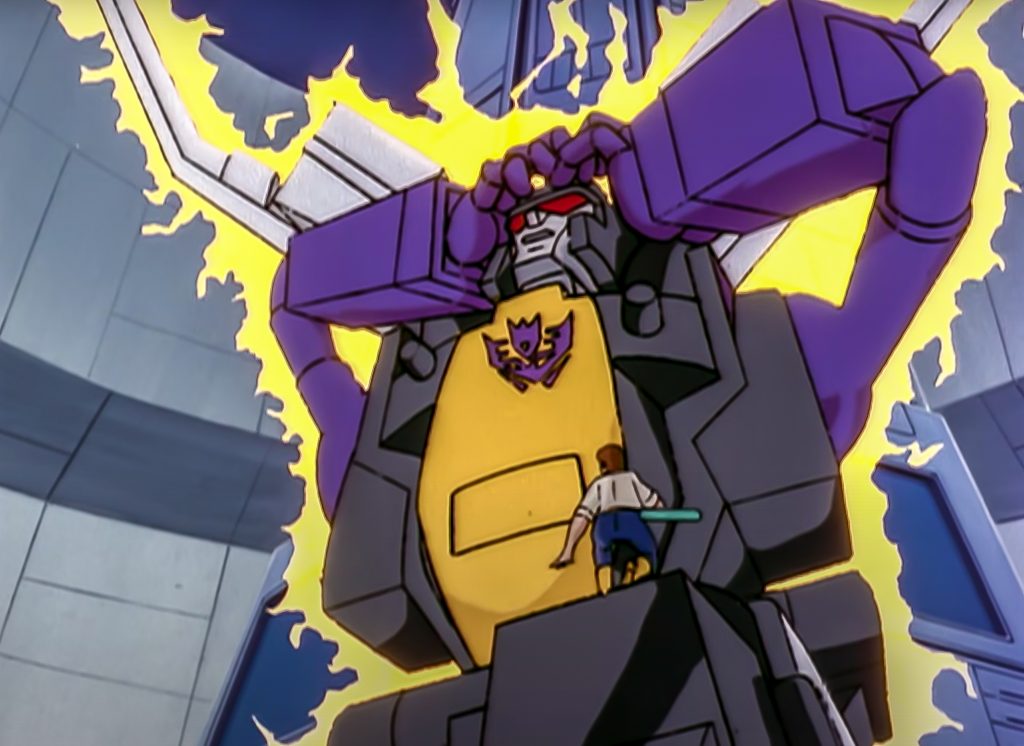 Spike’s sense of self-sacrifice is evident when the Insecticons overpower themselves and are set to blow up. Despite Autobot and Decepticon alike sitting on the sidelines, Spike takes it on himself to grab the antidote and climb up Sharpnel’s legs before hurling the cure inside his chest and jumping out of the way of the oncoming explosion. What a guy.

#5: Going one-on-one with Skywarp (Roll For It) 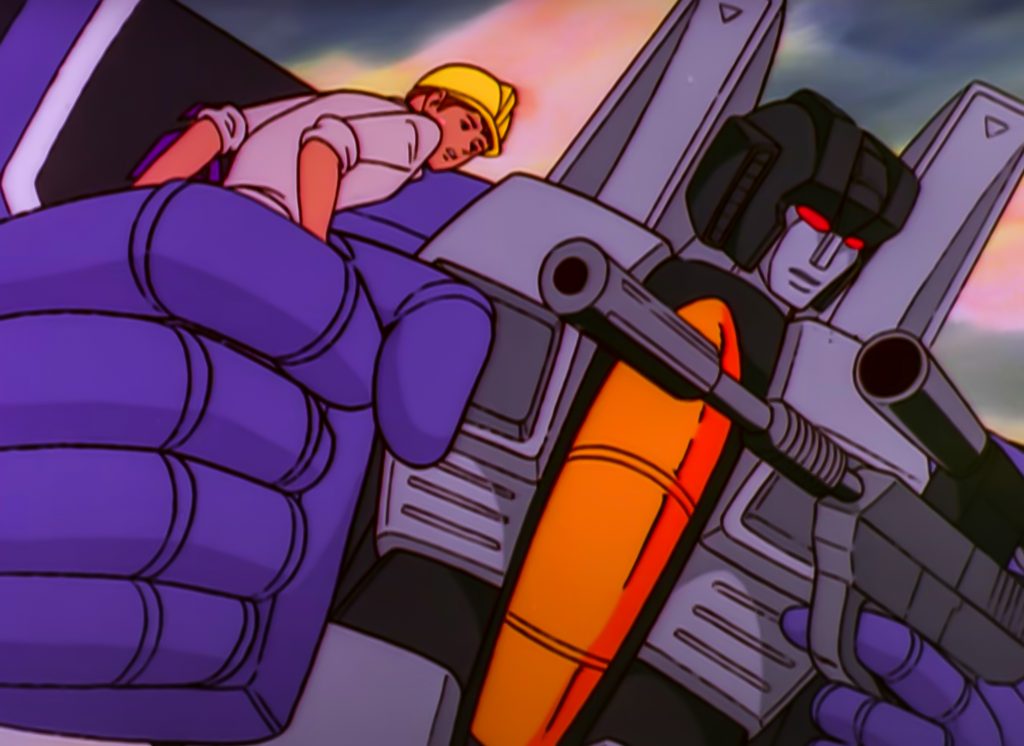 Never one to back down from a fight, Spike single-handedly takes on Skywarp and a souped-up Megatron here, charging into battle with nothing more than a pneumatic drill. After bravely trying to attack the Seeker’s leg, he soon finds himself about to be shot in the face but it’s ok, as it’s all a ruse to give Chip enough time to enact a plan to claim victory. Seeing Spike going at a Decepticon with a simple building tool is quite something!

#4: Protecting Carly on Cybertron (Desertion of the Dinobots part 2) 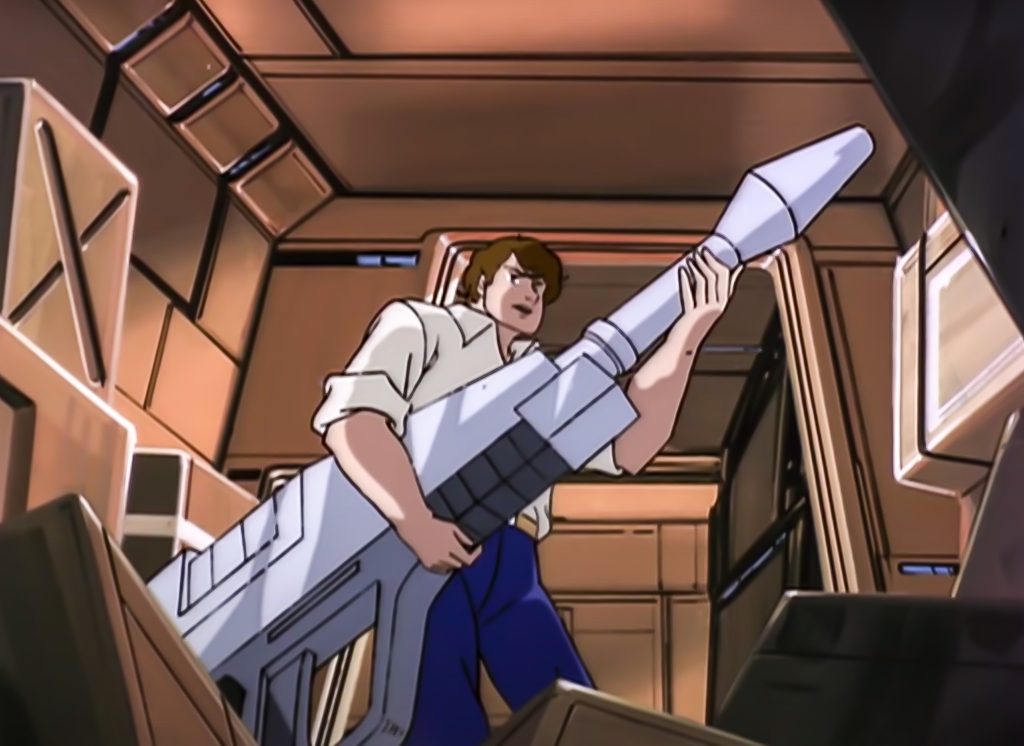 On another visit to Cybertron, Spike and Carly go looking for supplies of Cybertronium (yep, I know), a vital element needed to keep the Transformers on Earth functioning. They encounter numerous hostilities on the way but Spike’s big moment is surely when he rushes to find a way to protect Carly from an unidentified robotic assailant. He grabs a gun more than twice his size and blasts away! True, it ends up being Swoop but he didn’t know that at the time. His and Carly’s heroism would see them appointed Honourary Autobots.

#3: Leading the charge (Divide and Conquer) 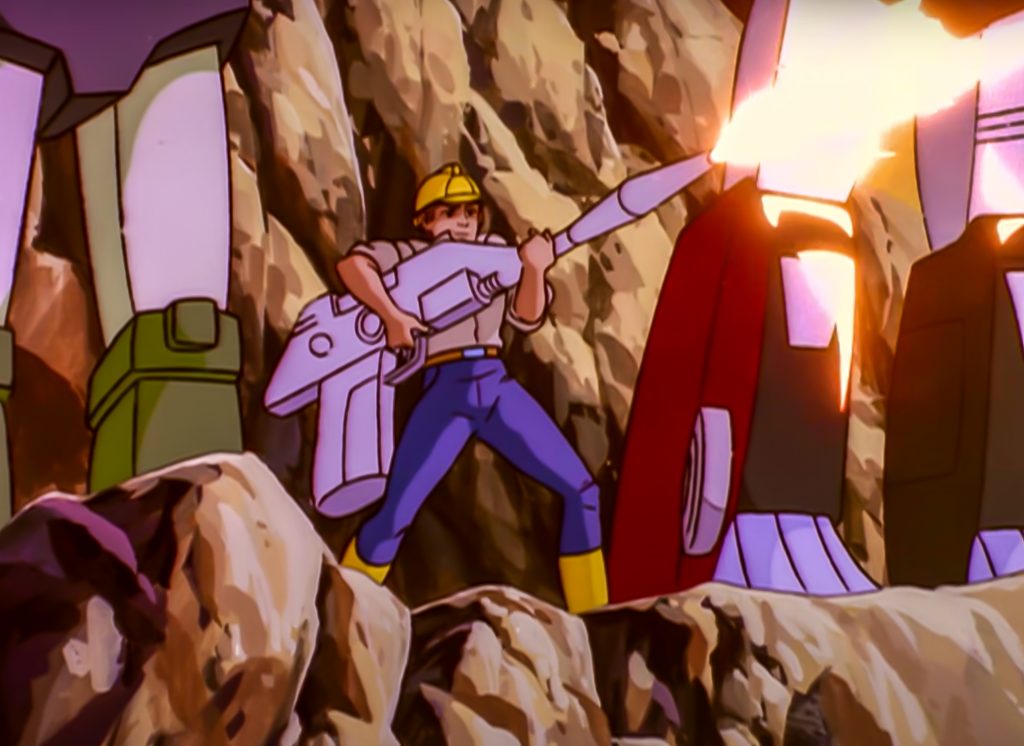 Optimus Prime is out of action and the Decepticons are approaching en masse to destroy the Autobots. It all looks hopeless and the good guys have just about given up. What chance is there? Leave it to Spike to get the crowd rallied, as he grabs Jazz’s blaster from his hand and says he’ll fight the Decepticons alone if he has to. Fortunately, the moment is heeded and the Autobots march into battle, Spike’s inspiring words ringing in their ears, and he’s right there on the frontlines with them. 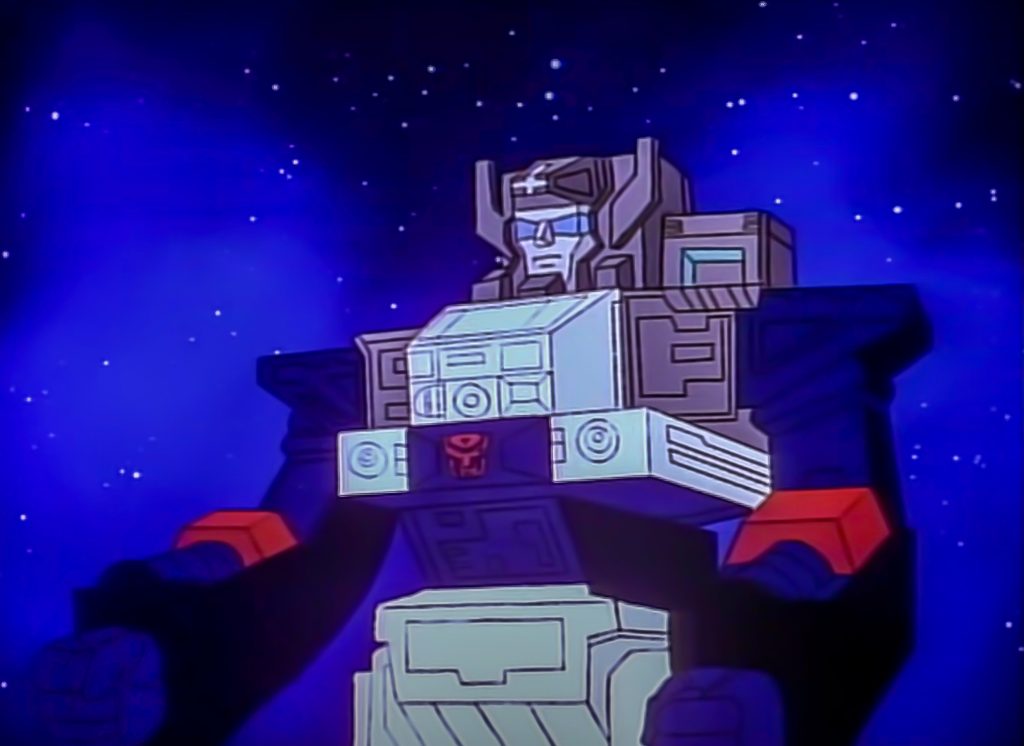 If there was any limit to Spike’s abilities, it wasn’t evident here. For him, the stakes are massive, as the Decepticons have captured his son, Daniel. However, he proves you should never underestimate a father’s desire to protect his own as he sets about creating one of the largest Transformers of all time and returns to the battlefield ready to go, now in the guise of Fortress Maximus! Not even the might of Scorponok is enough to defeat Spike’s creation, as he yells, “Kiss your afterburners goodbye, Decepticon slime!”  and unloads the full might of this awesome weapon upon them. That’s a good dad.

#1: Standing up to the Decepticons (More Than Meets the Eye part 1) 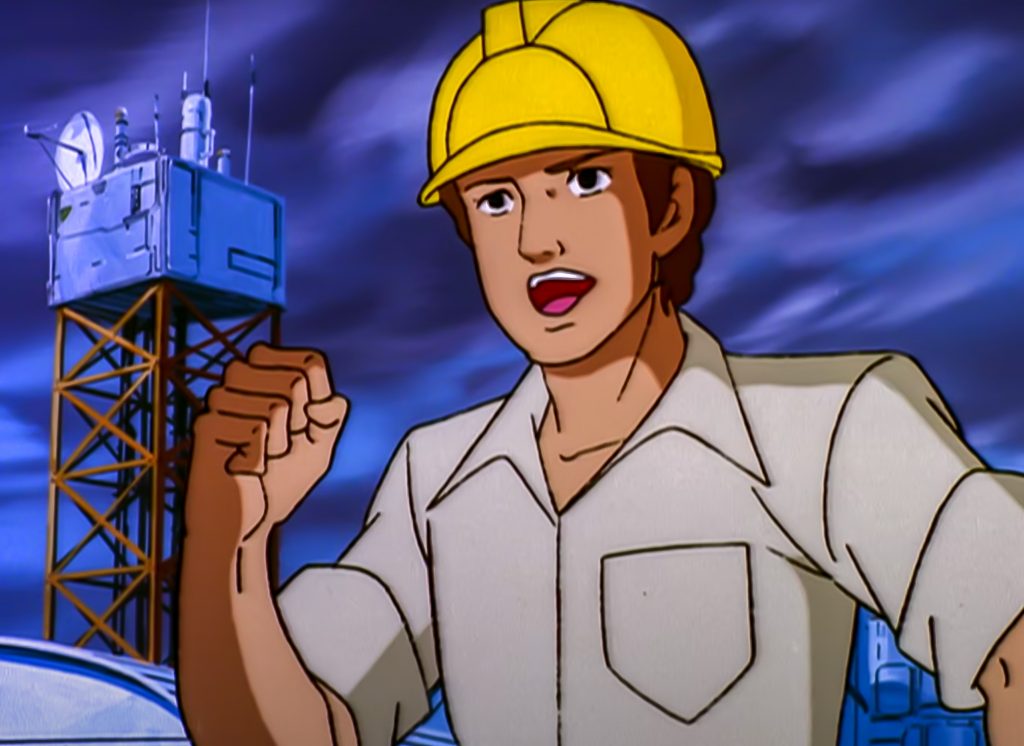 Our top entry is Spike’s first-ever appearance in the pilot episode of the cartoon, which might seem simple compared to some of the others but still, there’s no better demonstration of the kind of person Spike is at his core. When only fourteen years old, Spike meets the Decepticons for the first time when they arrive to start attacking the oil rig he’s working on with Sparkplug. Rumble has his father pinned against the wall but Spike wastes no time in stepping up and ordering the robotic alien to “let go of my Dad!” before attempting to thump him one with his bare hand. It’s all for nought as Rumble easily smacks him to one side but still, it’s an exceptionally brave moment and shows just how admirable Spike is. The absolute lad.

So that’s our list for today! Did we miss any other great moments?

This entry was posted in Source Articles Tagged with Countdown, Generation 1, Sunbow cartoon