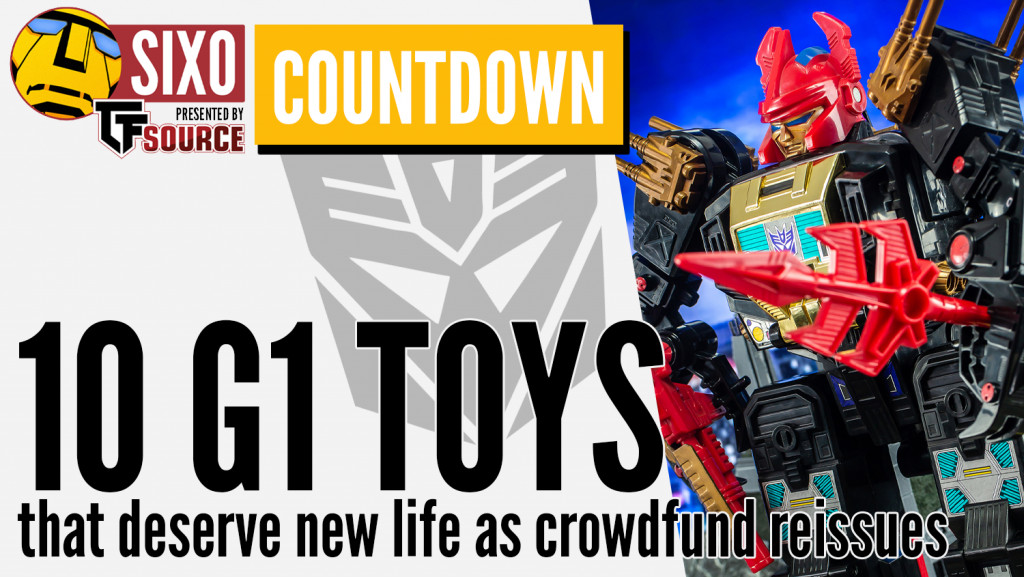 It’s funny the thoughts we conjure up chatting on social media. After all, a recent scroll through my Twitter timeline ended up with me thinking back yet again on one of the most awe-inspiring pieces of Generation 1 Transformers history that ultimately never was – the grand poobah himself, Unicron! 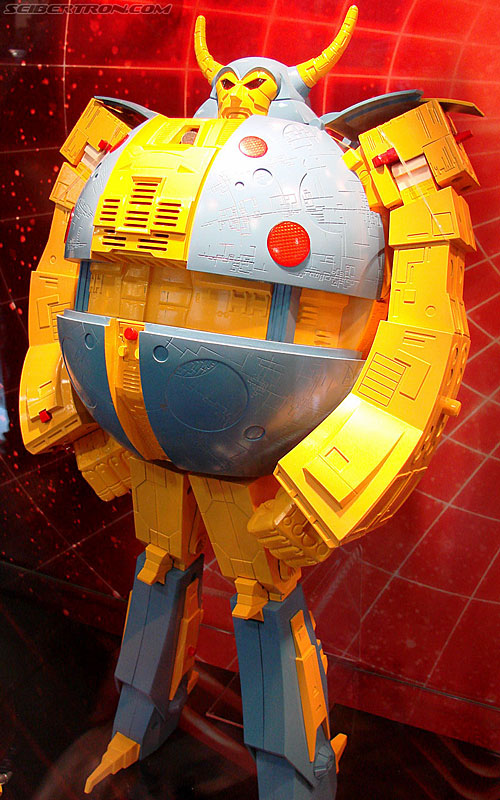 Unreleased at the time, I’ve little doubt this prototype won’t win a lot of fans over by today’s aesthetic standards, yet for those of us who continue to take delight from analysing the franchise’s roots, this is pretty much the poster boy of unobtainable grails. Quirky and bizarre and perhaps even a smidge unfortunate as it might be, it remains the ultimate symbol of something we never knew existed back in the franchise’s heydey, yet desperately wanted all the same. Well, apart from that one kid at school who absolutely definitely owned it, obvs. 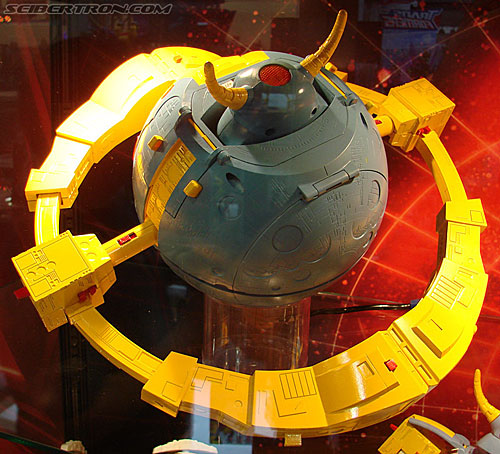 In some ways, time has only made this 1986 prototype seem more unusual today, especially as we now have an incredibly impressive new Unicron toy thanks to the recent Haslab crowdfund release, and one that perhaps obviously outshines this original effort in so many objective ways. However, to some of us there’s still an intrigue to the vintage specimen, an allure even the WFC effort can’t quite claim somehow. I know I would simply love to add such a thing to my own collection, and although I’m well aware of how unlikely it is to ever happen, I decided to ponder this particular pipe dream via a Twitter poll to see if others shared such an interest.

OK, I have to ask – if @HasbroPulse were to crowdfund a G1 Unicron toy (based on the unreleased 1986 prototype), would you be interested?

(Not saying would you definitely back it, as ofc there would be cost and other questions to consider)

As it turns out, 645 or so people said that they too would at least be intrigued about a reissue of this figure of some kind, perhaps made real by another Haslab crowdfund. The responses were mostly positive too (apart from the one prat who totally missed the point by accusing me of ‘initiating unreasonable demands’ – never underestimate the fun police, folks), with a lot of people embracing the idea and stepping up to assert their passion for such a potential project. Go team!

Don’t get me wrong, I’m well aware that it will never happen, but still, it got me thinking… what if Hasbro Pulse used their Haslab platform to crowdfund reissues of desirable or scarce G1 toys of this kind? Would such a thing prove popular? And what other releases could be fun to see? Well, here are my thoughts, anyway… 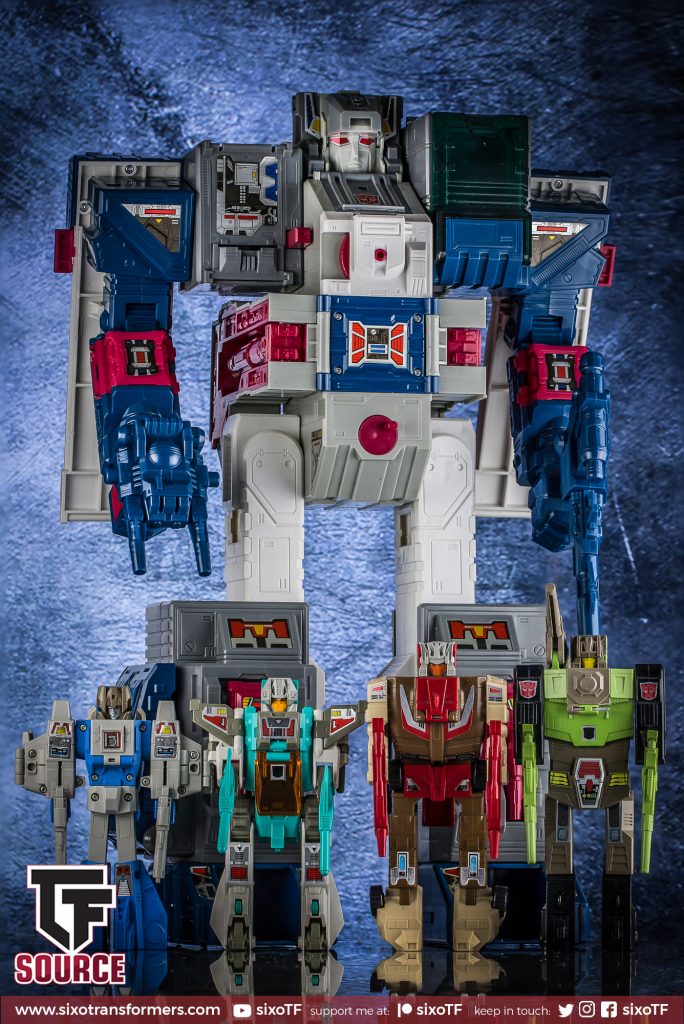 The 1987 G1 Headmasters are an incredible bunch of toys. Very much the first wave of wholly fresh designs after the mixed semi-Diaclone cocktail of 1986, they ushered in a distinct new aesthetic and also treated us to one of the longest-lasting and most embraced Transformers gimmicks of all – little men that turn into heads. It’s tempting to say Fortress Maximus would be an obvious place to start a Haslab crowdfund project but then, he’s also been reissued not that far back as part of the Encore line (and is still widely available to pick up for a surprisingly tidy sum even today). So perhaps it might actually be fun to see the more standard-sized toys offered up as new releases, especially with the ‘retro-styled’ Titans Return reissues having only recently made a splash with collectors. Or perhaps it might be impressive to see a re-release of the classic Scorponok toy, eh? After all, it remains a true highlight of the original Transformers line that continues to be beloved by collectors today! 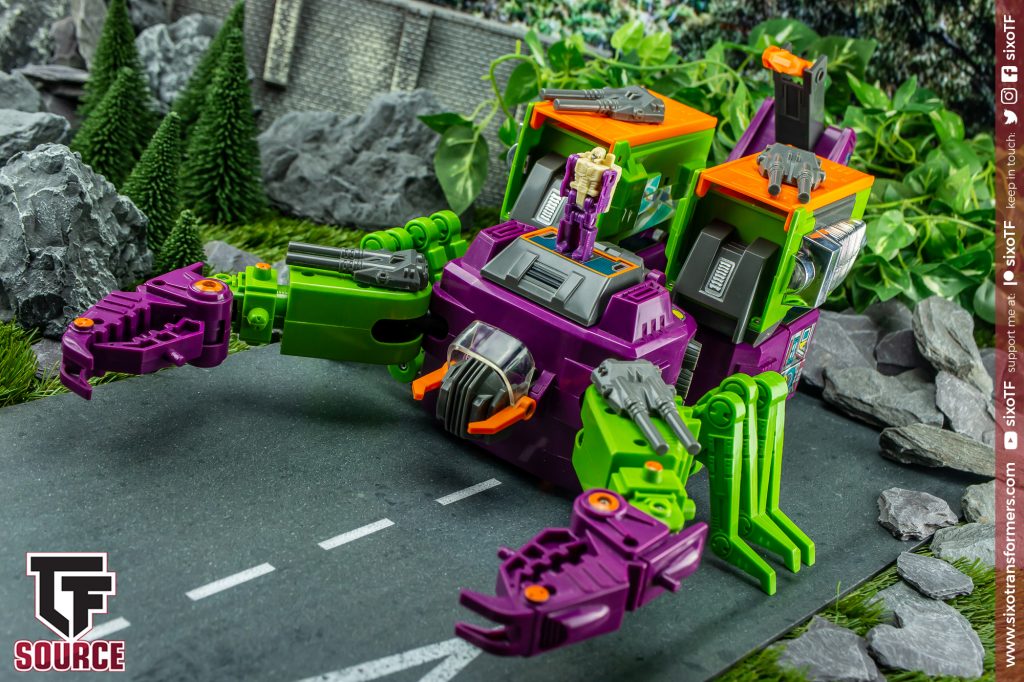 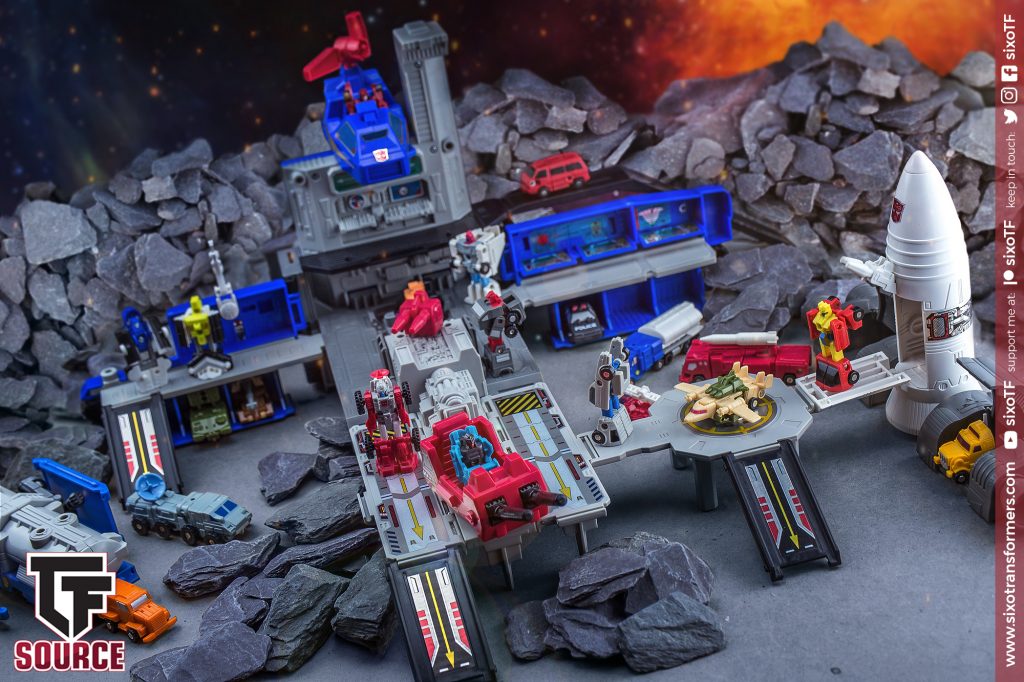 Similarly to Headmasters, Micromasters are a G1 staple that has been attempted in new toy form since, although I’d argue never anywhere near as successfully as their first outing! It seems as if someone at Hasbro agrees with me, as a recent rumour revealed the company now considers the little blighters ‘dead’ in toyline terms, which is a true shame considering what a success they really should be. How about showing everyone how it’s done by crowdfunding one of the most desirable parts of the original line, that being the largest playset of them all – Countdown! He’s so incredible, he even offered up his name to this series of articles, no less! 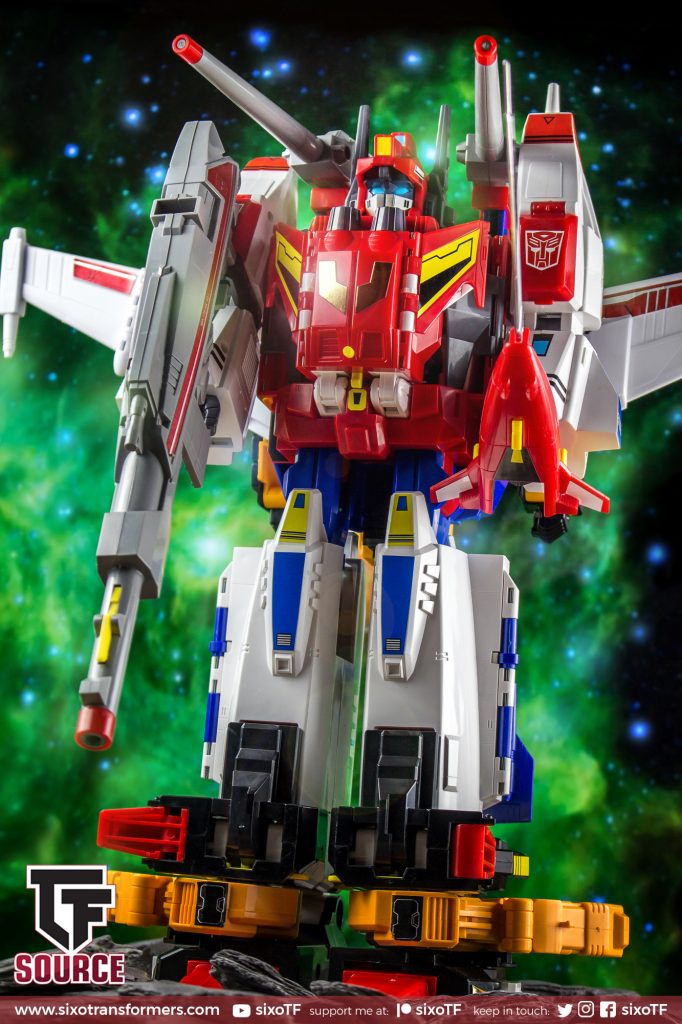 Whenever I’ve chatted with people about G1 reissues, there’s one area of toys that inevitably pops up – Takara’s 1989 Victory! line, and for good reason. After all, most of these toys are very hard to get your hands on today, if not because of rarity then certainly due to value. Whilst stuff like Deathsaurus remains surprisingly plentiful on today’s aftermarket, even that falls under an entry price likely to turn off most collectors, to say nothing of the extremes specimens like Liokaiser, Dinoking, Galaxy Shuttle, Black Shadow and Blue Bacchus can all go for. Surely any of these would be a welcome sight for a lot of collectors looking to fill a few spots on their shelves, even if they underwent some changes to distinguish them from the originals. For my money though, there’s little doubt that one of the most accessible options would be a G1 Victory Saber reissue, including both Star Saber and Victory Leo components, as a tandem release with the upcoming new Generations design. 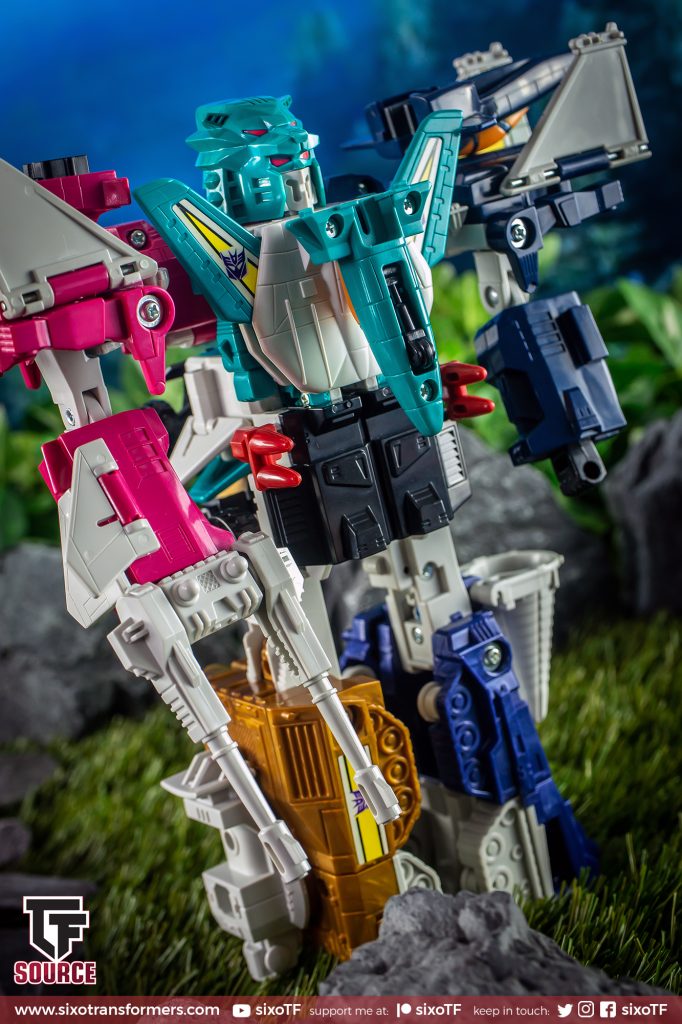 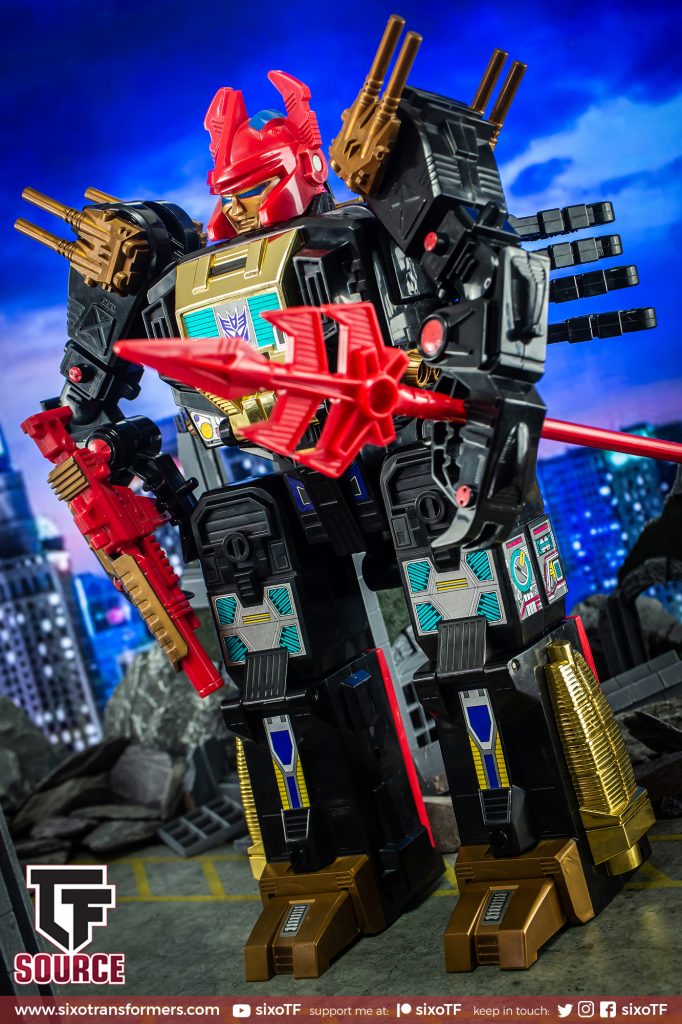 Speaking of rare Japanese G1 ‘bots, how about this classic Scorponok retool for your consideration, eh? After all, with a brand spanking new Generations Selects figure just having been released, it’s fair to say that Black Zarak’s star has never shone brighter, and with the original toy being one of the most notorious candidates for the dreaded gold plastic syndrome from back in the day, I would imagine a fair number of collectors might say a ‘fixed’ reissue is worth its actual weight in gold. Or nearly, anyway. 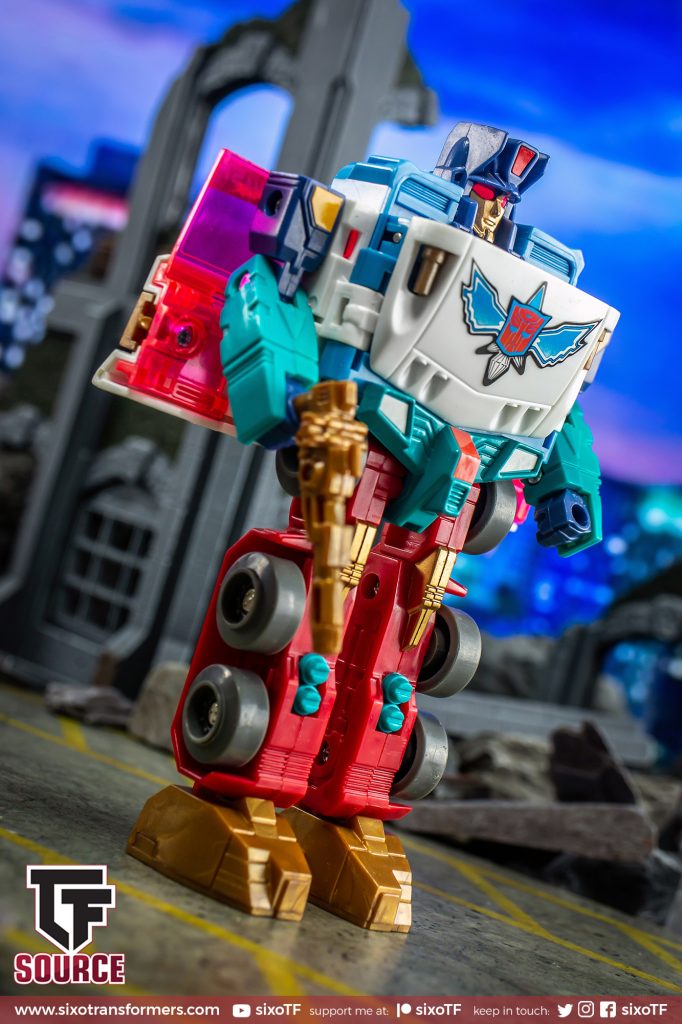 Following on from the theme of “it’s old, it’s gold, to not break it you were told!”, here’s Thunderclash for your consideration! Yes, another famous GPS victim, the character has since gone on to find new-found fame despite his obscure roots and lack of an American release at the time. I can only imagine that a lot of collectors would be keen to see this one given the reissue treatment now, potentially alongside other Turbomaster and Predator releases too. 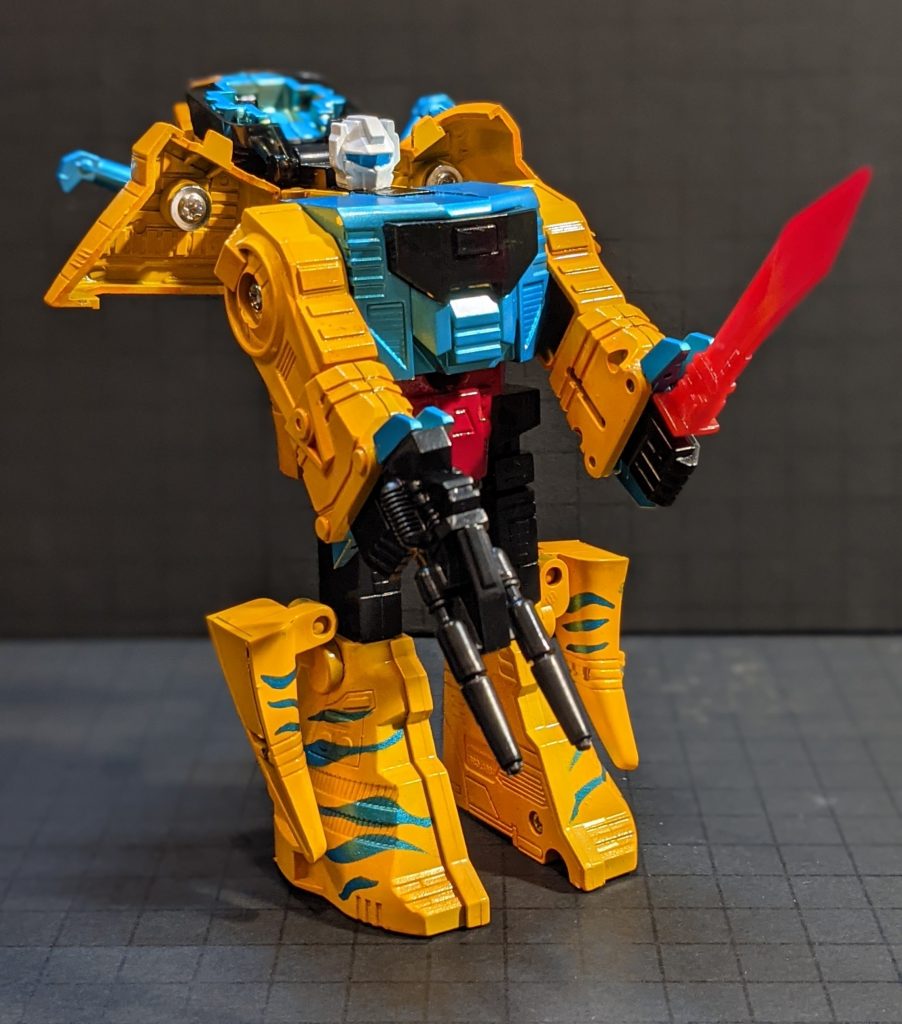 A bit of a cheat here as it’s technically Generation 2, but never mind! The original G1 Dinobot crew hasn’t been reissued since the ’90s, with the only examples of that being the ‘gold box’ Classics line from 1990/1 and the Generation 2 makeovers a few years after. It’s well-known by now that despite only three of the original five team members getting the treatment at retail, there were plans for more, including artwork depicting both Sludge and Swoop in new colour schemes, and a rather snazzy new design for their leader that has since been dubbed ‘Tiger Grimlock’! These outlandish new paint jobs have never really disappeared from collectors’ imaginations (as evidenced by the terrific custom work seen in the two photos here) and could be perfect material for crowdfund releases at long last. 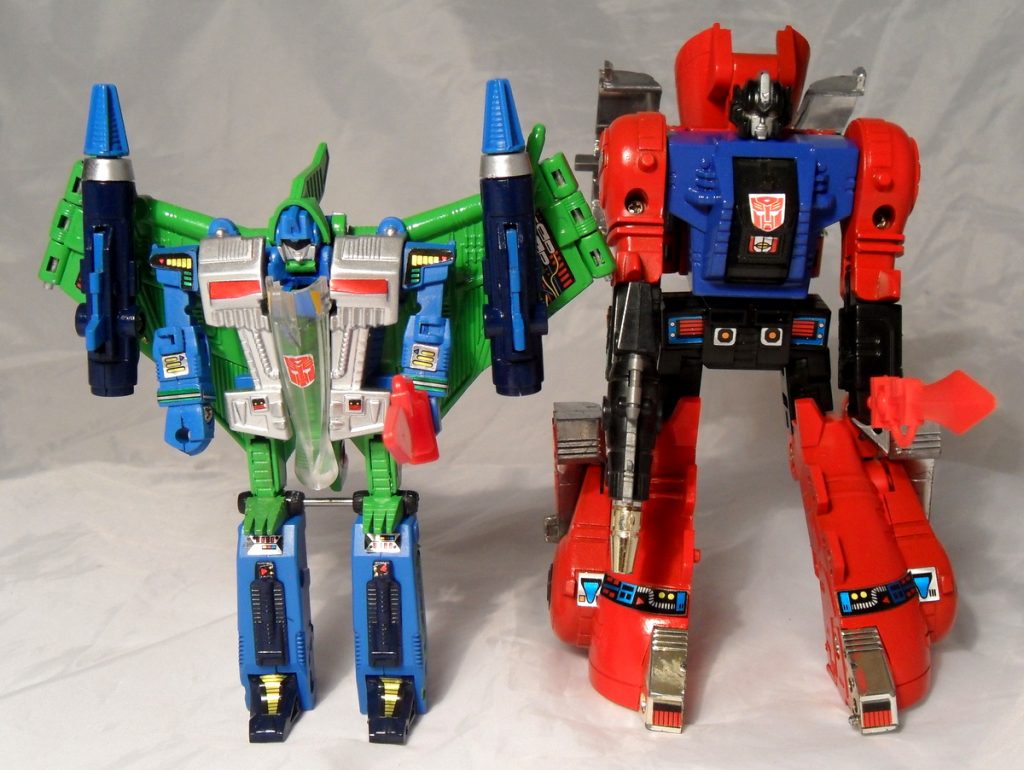 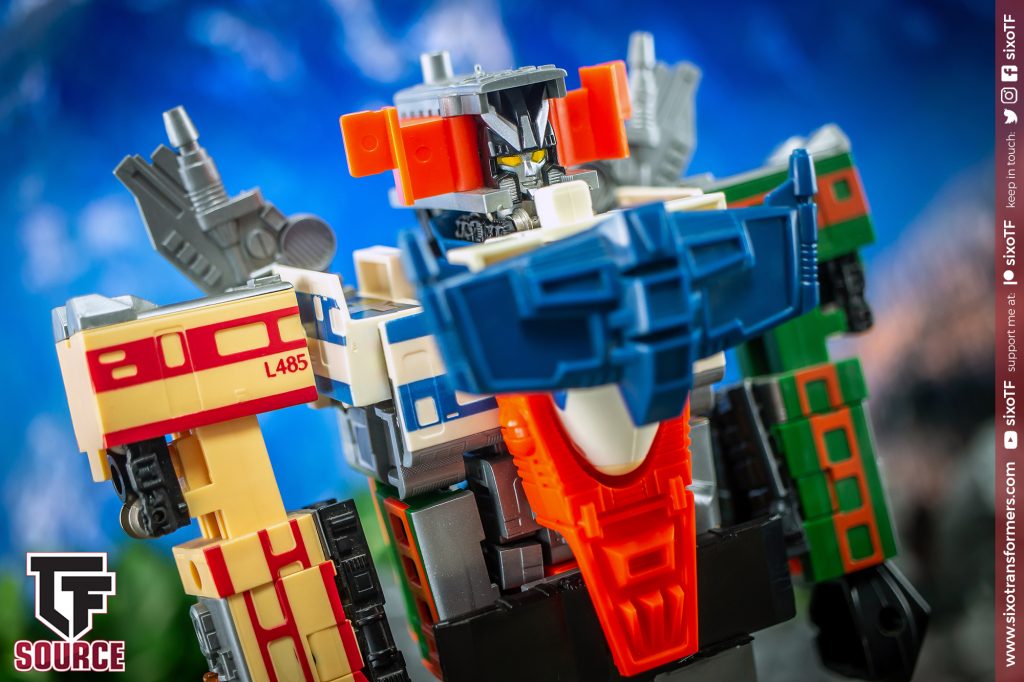 Of all the many Masterpiece projects currently on the way, a lot of fans would I’m sure tell you the upcoming MP-G Raiden set is one of the most anticipated. After all, six trains that turn into a Masterpiece-scaled Big Man? Our first MP combiner? I’m on board already. So, how about celebrating such an awesome event by reissuing the original team to go alongside it? After all, when the MP Raiden project was first announced, there was significant excitement from certain corners that this might come to pass, so I’d say at least some of the desire is already there. Full steam ahead, then! 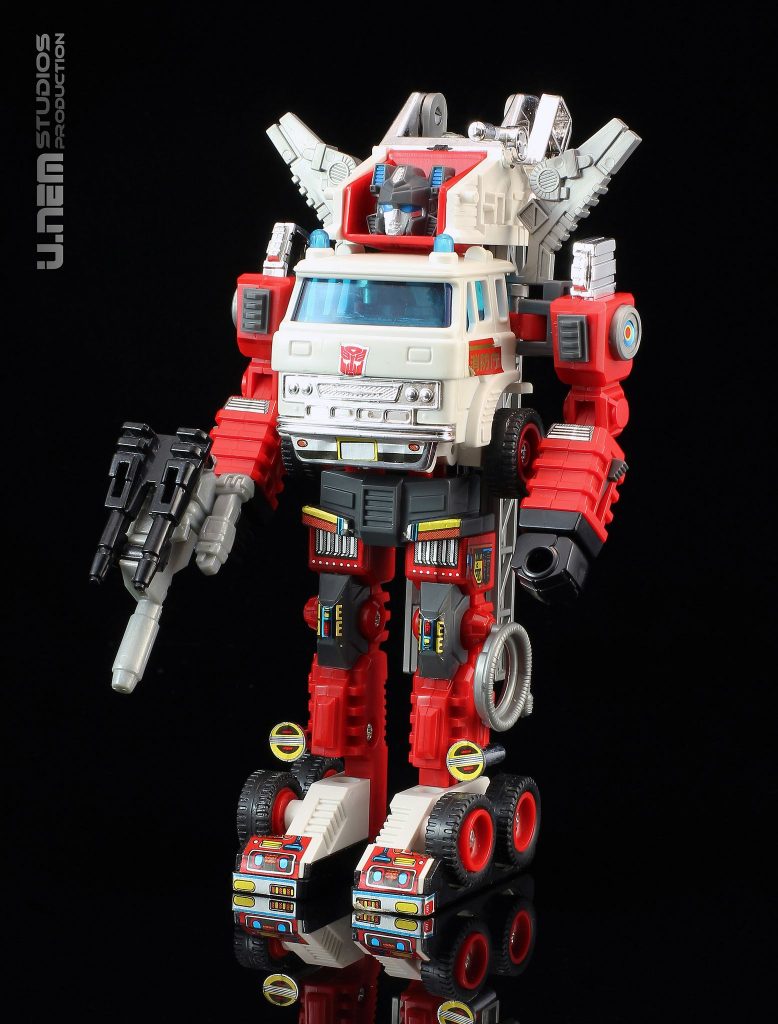 OK look, this entire list could just be “here’s a bunch of hard-to-get, ridiculously-expensive Japanese Transformers from the ’80s”, but it’s worth including just one more! Artfire may be a simple Inferno repaint (and one with only 50% repainted parts, no less!) but still, he remains an ultra-desirable part of G1 collecting and a grail that is out of sight for a fair few fans. Again, it would be fantastic to see this done with some sort of variation to the original release to help distinguish it, but otherwise, this one strikes me as hot to trot. 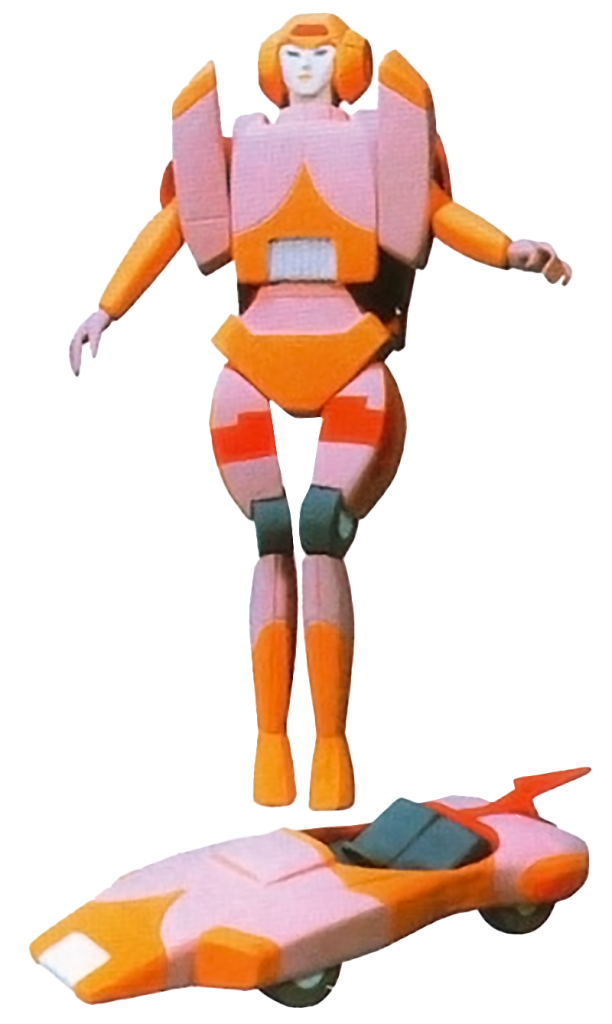 If there was one fairly consistent reply I saw when I posed the question about Unicron on Twitter, it was people saying they’d also be interested in a G1 Arcee release of some kind. But wait, she never even had a toy back then, did she? Well, no, she didn’t, but there was a very early prototype developed at the time, although unfortunately it was abandoned not far along the process. Whilst unfinished, I think there’s enough going on here to consider working it into a final product and delivering the first new G1-style Transformers toy in over three decades! It would be quite an incredible release. 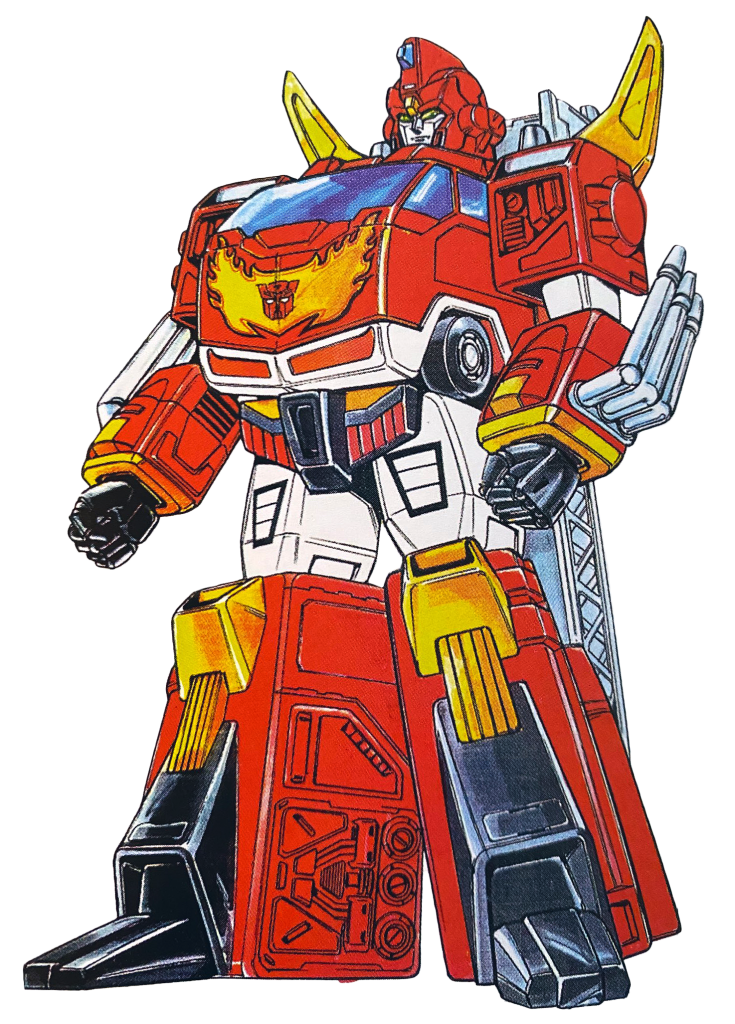 Our final entry for today is something really unusual! Only ever imagined as artwork and finally revealed in a Transformers Generations book, ‘New Rodimus’ would have been a fresh take on the Autobot’s second-most famous leader as part of the Return of Convoy line in 1991, transforming into a fire engine instead of his classic ‘space Winnebago’ mode. Legend has it this design eventually became significantly overhauled for release as part of Takara’s Brave franchise under the name of ‘Duke Fire’ but still, one can only imagine how awesome the original thing would be if it were to ever see the light of day now. We live in hope, eh?

So that’s the lot… for now! Are there any other toys from the time you would love to imagine getting a crowdfund reissue release?