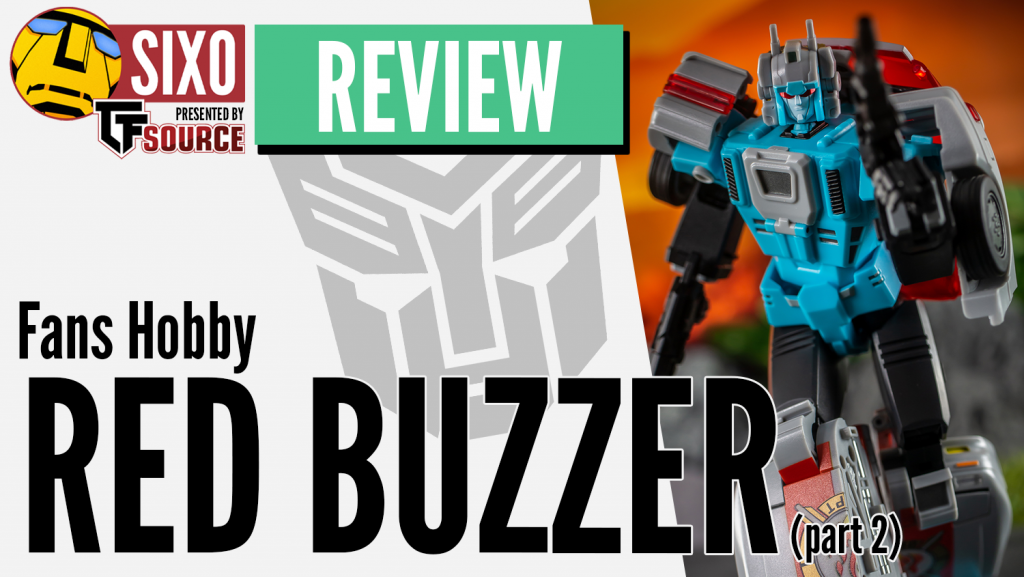 We’re back for the second part of our look at the new Fans Hobby Junior Headmaster release, which this time is the rather swish-looking Red Buzzer! In case you missed part 1, be sure to check it out first as that car mode is more than worth your attention, for starters. 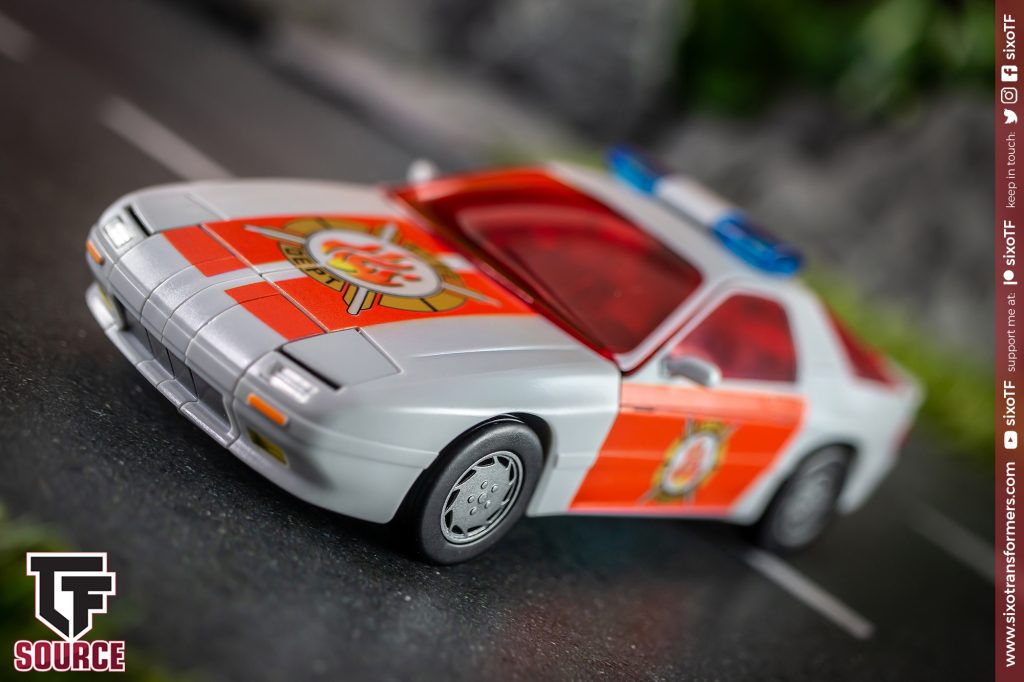 Turning towards transformation, this will of course be an entirely familiar process to anyone who already owns this figure’s mould-mate, Ace Hitter, but if you’ve never come across either toy before then there’s quite a bit to enjoy here. It’s a relatively straightforward process, taking a few pages out of the classic Transformers playbook here and there, albeit with a couple of unmistakable Fans Hobby flourishes to boot. 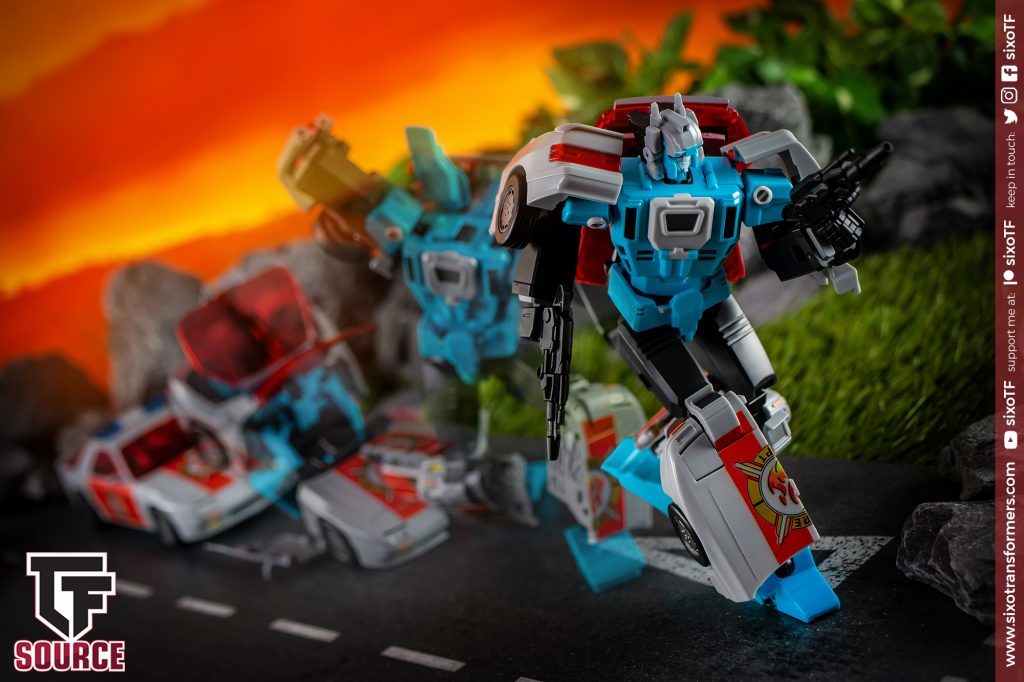 The big thing for me is that nothing feels awkward or cumbersome, with every part folding into place in a fairly forgiving manner. That alone is enough to leave this design feeling significantly more polished than its predecessor, used to make both Athena and Nite Walker, which means we’re off to a great start with robot mode already! 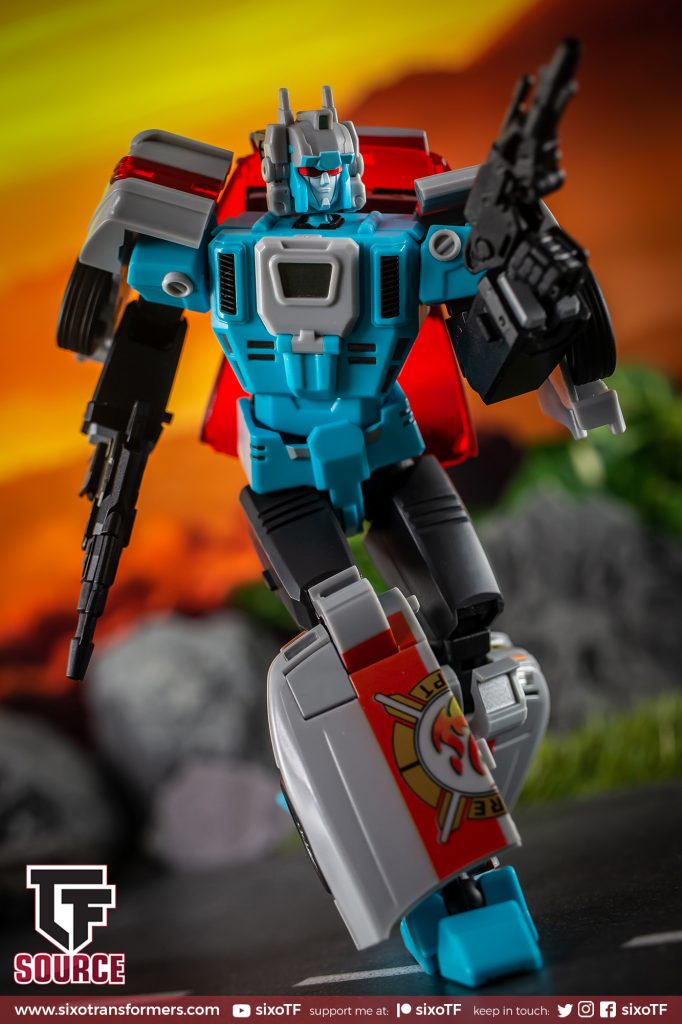 The final addition here is the Headmaster, leaving you with a very handsome humanoid form once you’re finished! Again, I may already own Ace Hitter, but there’s something about this lad that’s worthy of yet another assessment. He’s a hot ‘bot and no mistake! 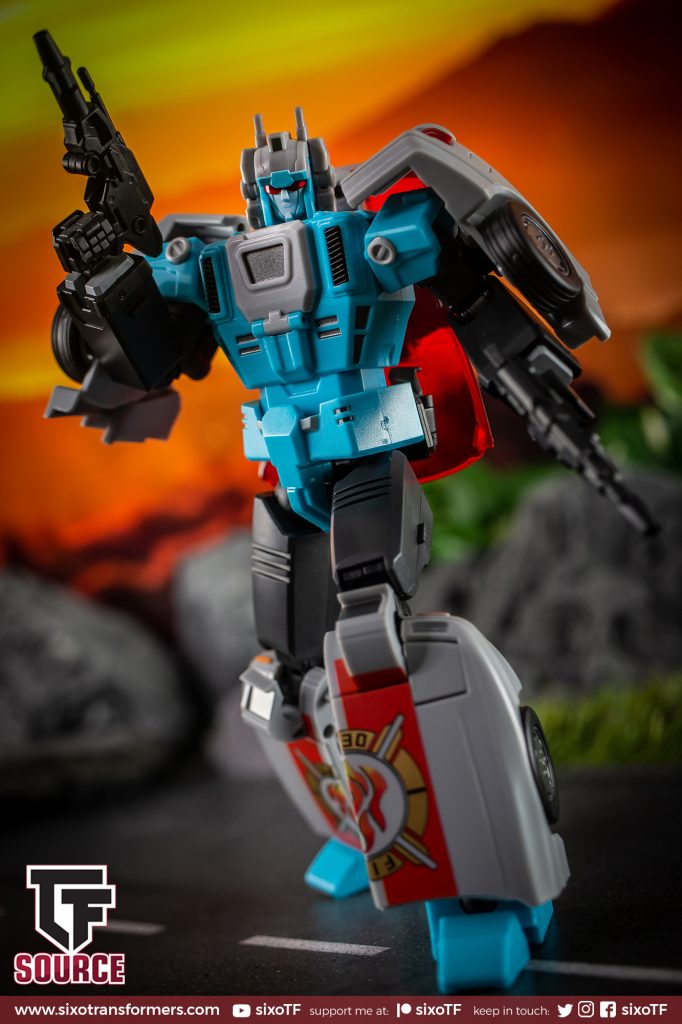 First thing to acknowledge here is the general aesthetic Fans Hobby have opted for, which is distinctly more ‘blocky’ than the likes of Nite Walker and really plays into nostalgic Generation 1 territory to my eye. Just look at those angular thighs and hard-angled upper body and your mind can’t help but travel back to the bygone era of 1980s’ robot design, making Red Buzzer feel closer to the source material than a lot of Fans Hobby releases, in my opinion. 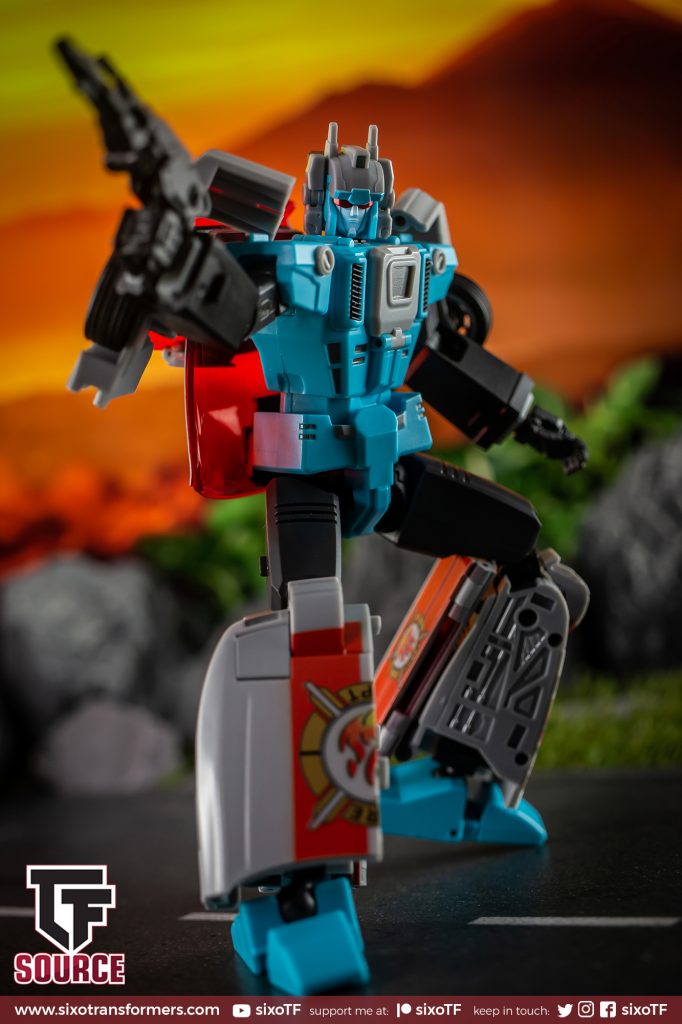 Yet he’s still unmistakably Fans Hobby in his way, with all of the usual quirks one has come to expect from their inherently stylised design. The result is a nice mix and perhaps allows Red Buzzer to bridge the gap a smidge between the likes of official Masterpiece carbots and the more distinct aesthetic you see on Nite Walker, for example. Needless to say, I like how he looks. 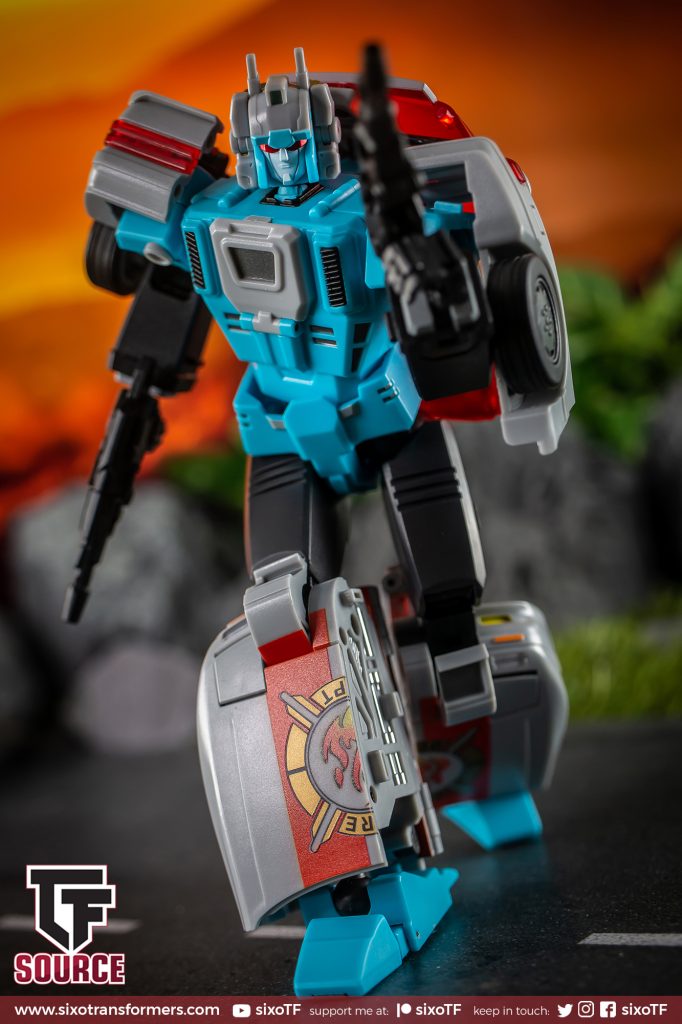 The finish is as good as what we saw in car mode too, with all of the carried-over elements still looking on fine form, not least of which are those bonnet tampos that now adorn the shins. As before, it’s a mostly bare plastic body but I don’t think that’s a bad thing, by any means. 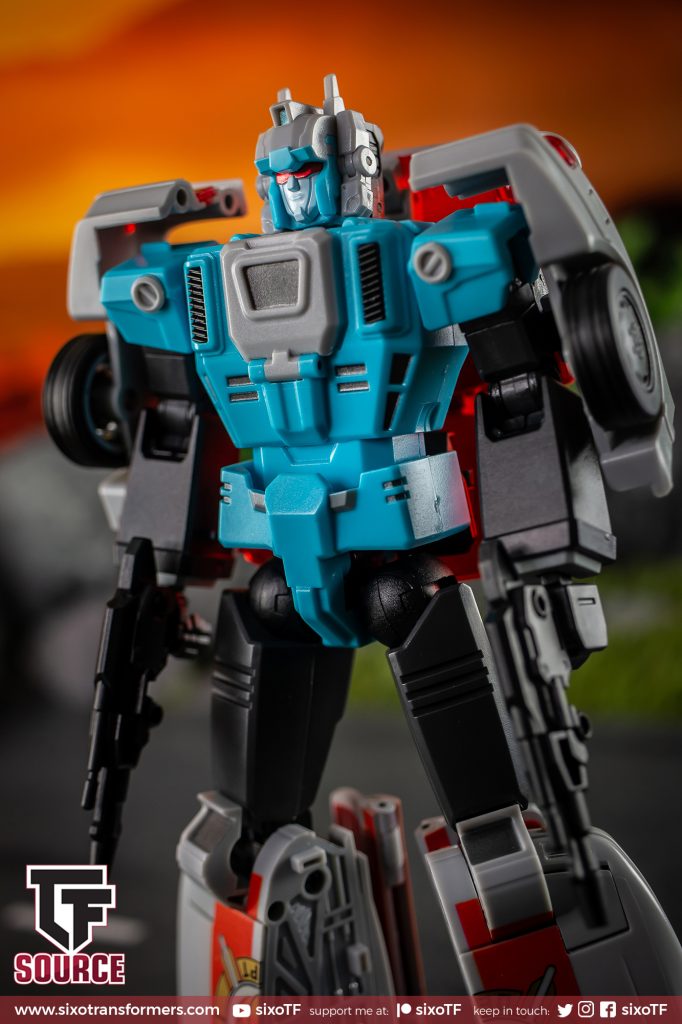 There are some paint applications to be found although you might notice they’re a bit minimal if anything, mostly being reserved for dark grey accents on the moulded sections of the main blue body and a couple of lighter grey touches on the shoulders. If I really sat and critiqued it then I might conclude that it felt a little minimal but to be honest, the overall look is strong so I’m more than happy with it all. I think he presents well. 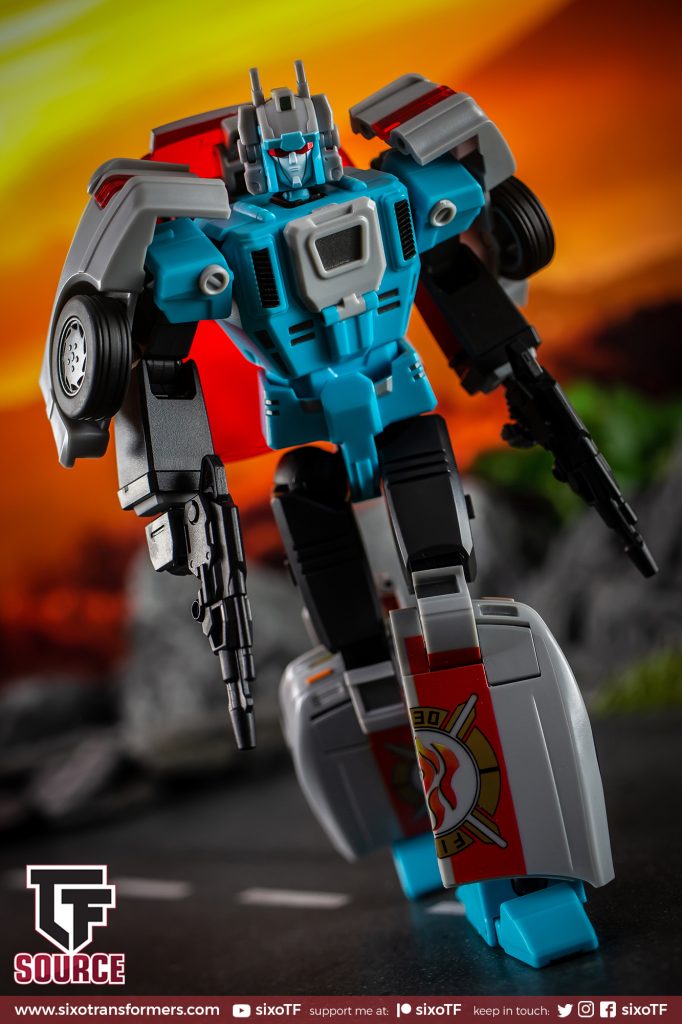 Besides, the colour scheme is also really attractive here, and whilst it’s not a million miles away from Ace Hitter, I really like how easy on the eye the soft grey is versus the brighter blue, all topped off nicely by the hints of that striking red windshield poking through from the rear. 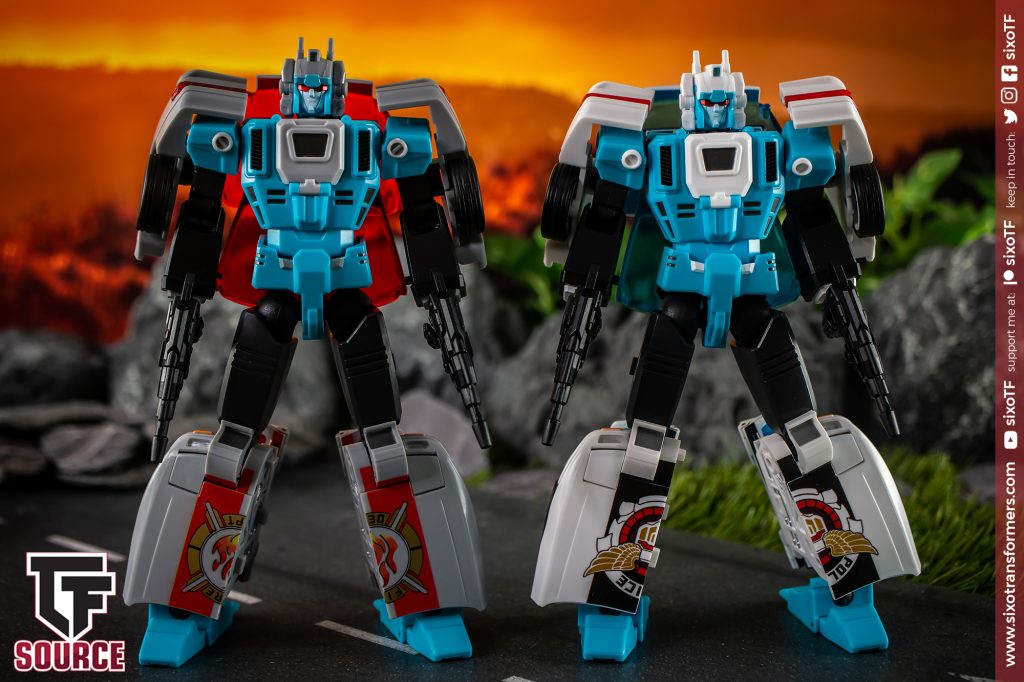 Even looking at both versions of this mould side-by-side, the differences are not necessarily night and day, although no doubt the decals on the legs separate things a touch. I’m also a big fan of the different look one gets from the red and blue windshields. They may have a bit of overlap but be fair they both do a great job at referencing their respective parts of Generation 1 in their own way. 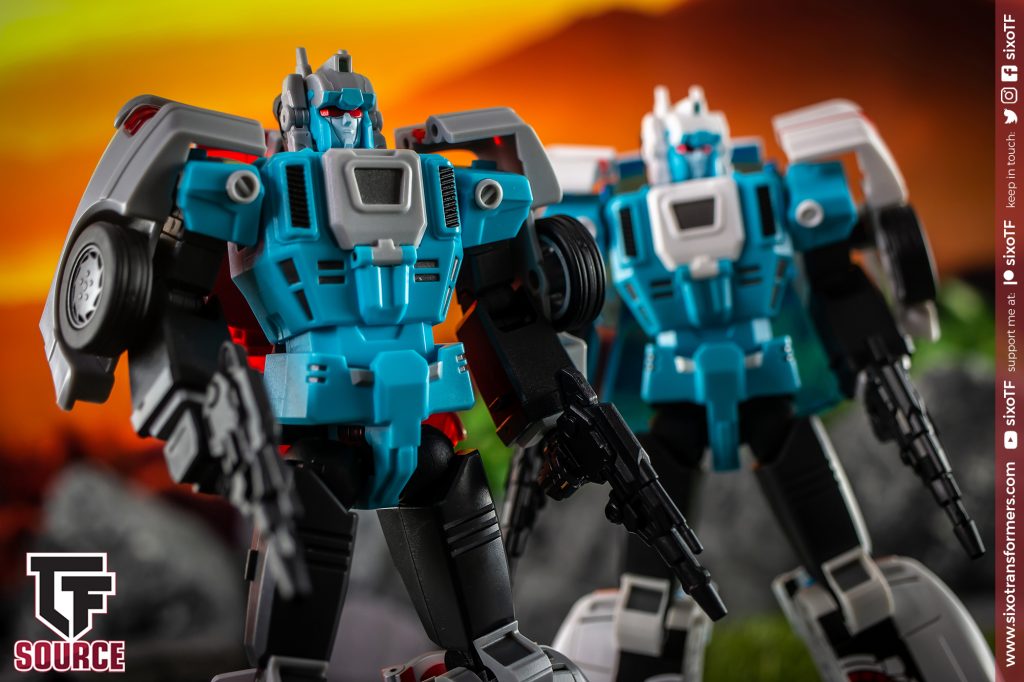 Besides, I’ve yet to track down a suitable G1 Goshooter myself so at least having a 3PMP version of the character goes a small part of the way to scratching the itch for now! I’m also very grateful to Fans Hobby for seeing fit to follow through with a Siren repaint as it’s a classic toy I love and adore, and this is a very fitting update in a number of regards. 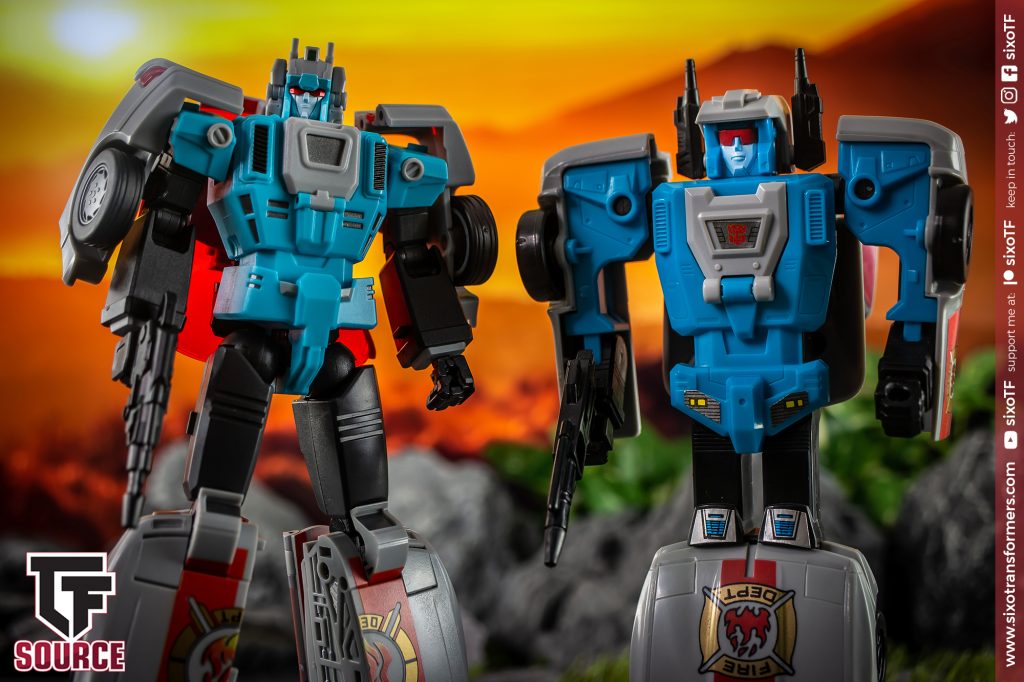 Again, it captures the chunky appeal of the vintage design and feels like something that represents the same character, despite being a bit of a departure in a few ways. All of the right elements are there to make it work though, including those distinctive shoulder panels. 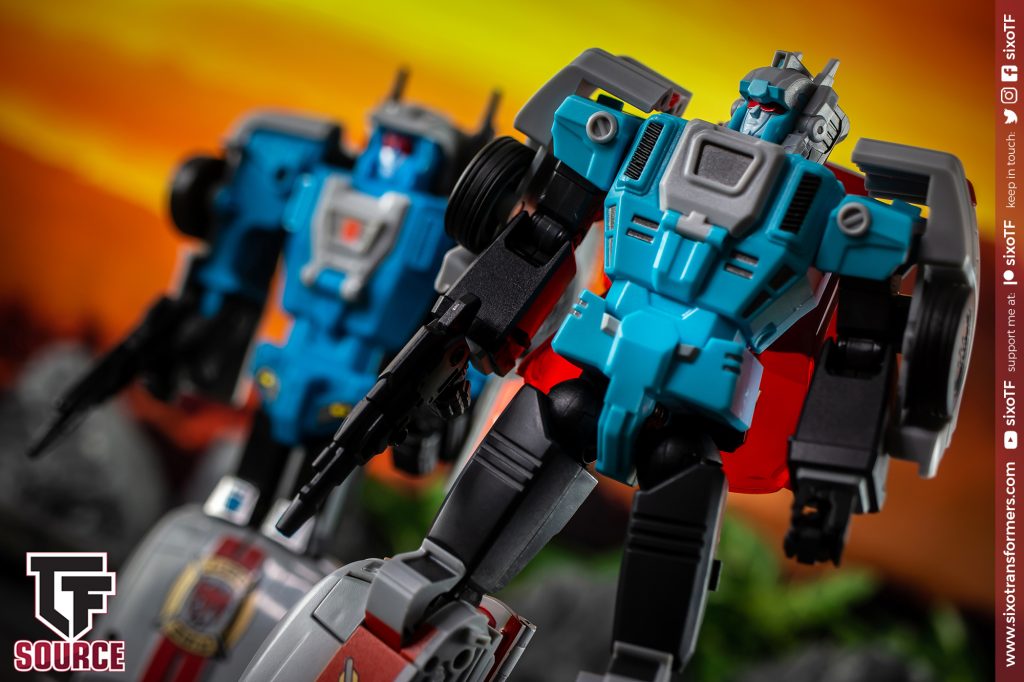 If I had one critique here, I perhaps would have liked a more vibrant or saturated baby blue to better match the G1 toy, and although this colour was identical on both the Siren and Goshooter originals, it might have been used to bring a touch more variance to the Fans Hobby updates here. Still, it all looks good. 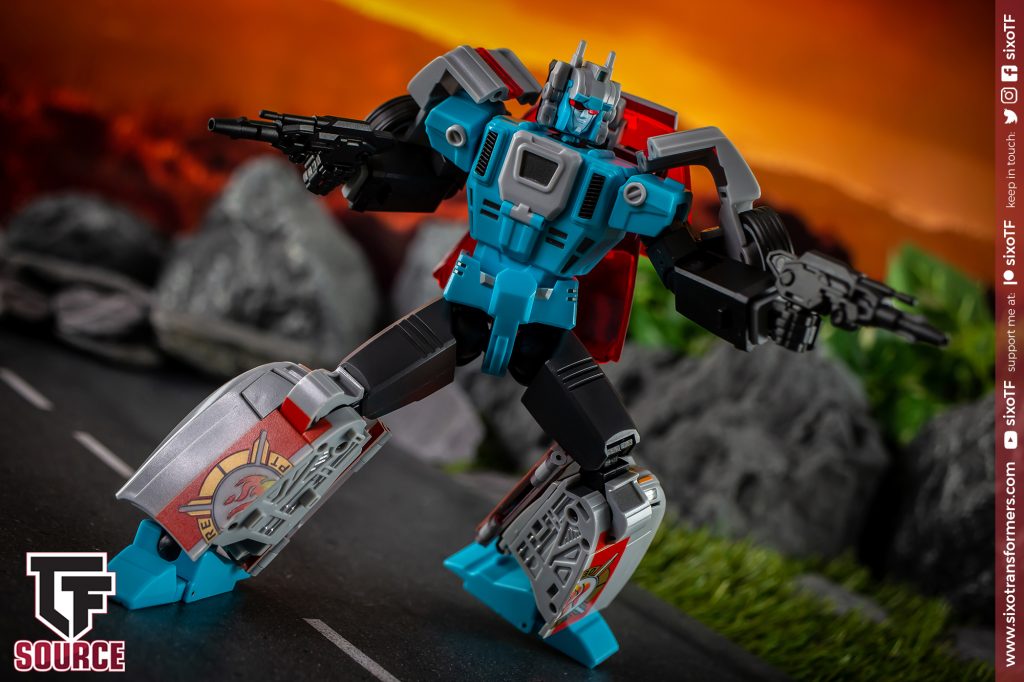 Red Buzzer also feels remarkably sturdy in hand, with nice, tight joints and a general sense of solidity to him. He comes off as altogether more stable than the likes of Nite Walker in that regard and is just generally another quality product from Fans Hobby. 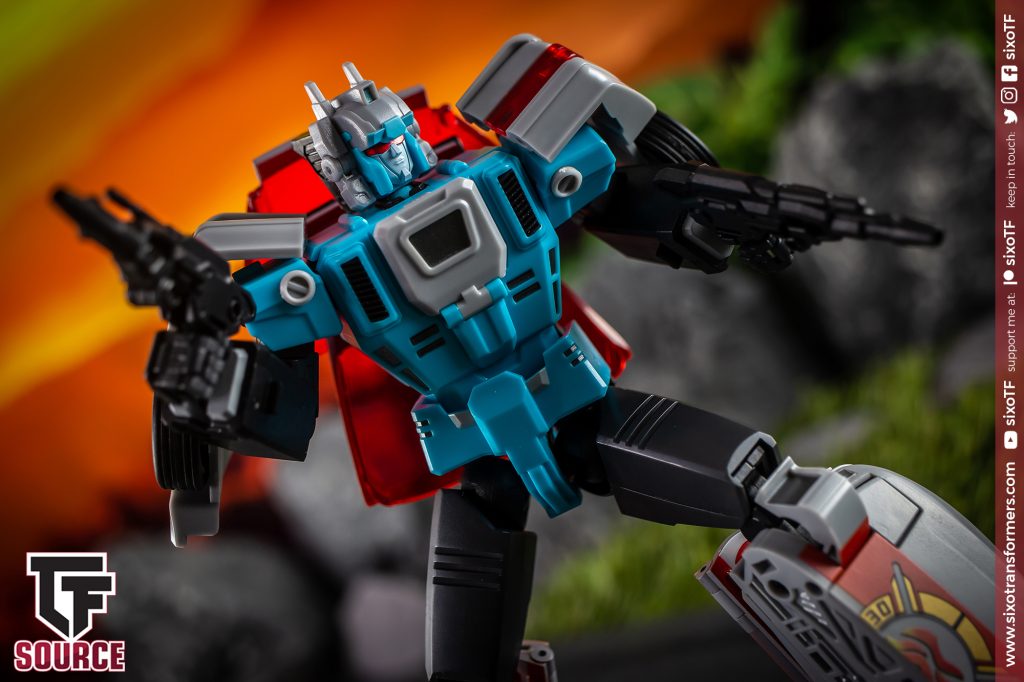 The actual range of articulation is not bad either, with legs and arms all allowing for a decent amount of poseability, all told. Those shoulder panels are a little hindering at times and will require a bit of thought with how you place them for certain poses, but on the whole, there’s enough going on here to have a bit of fun with. 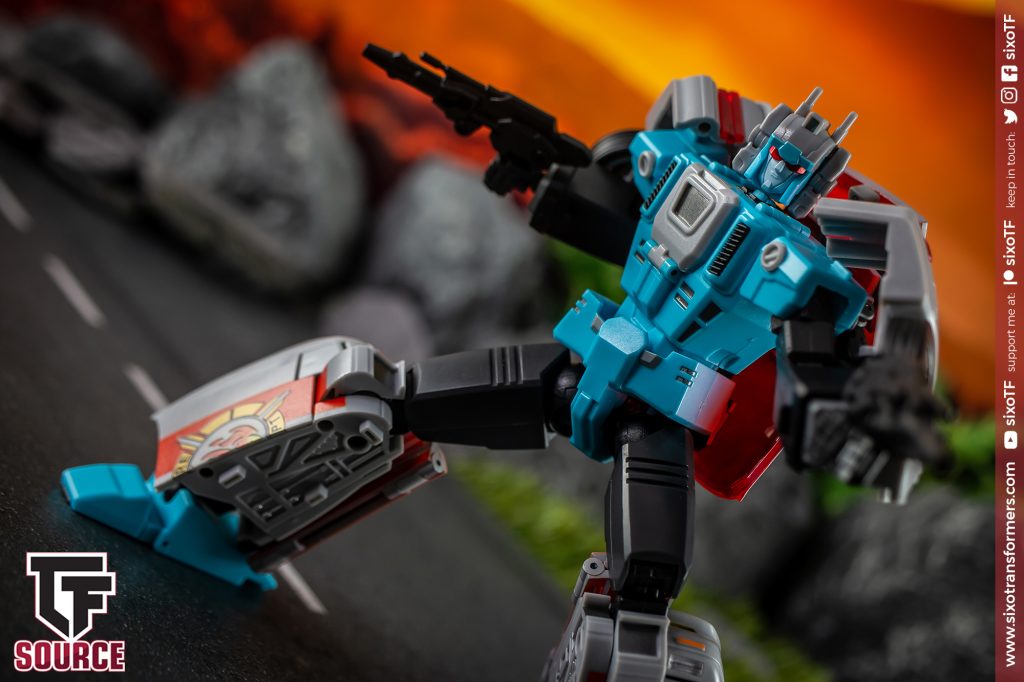 I also really appreciate the ball-jointed waist section, which sits well-hidden inside the blockier sections of the robot body. It means you get a very decent feeling of movement here and makes Red Buzzer feel a touch more dynamic and fluid in how he moves. 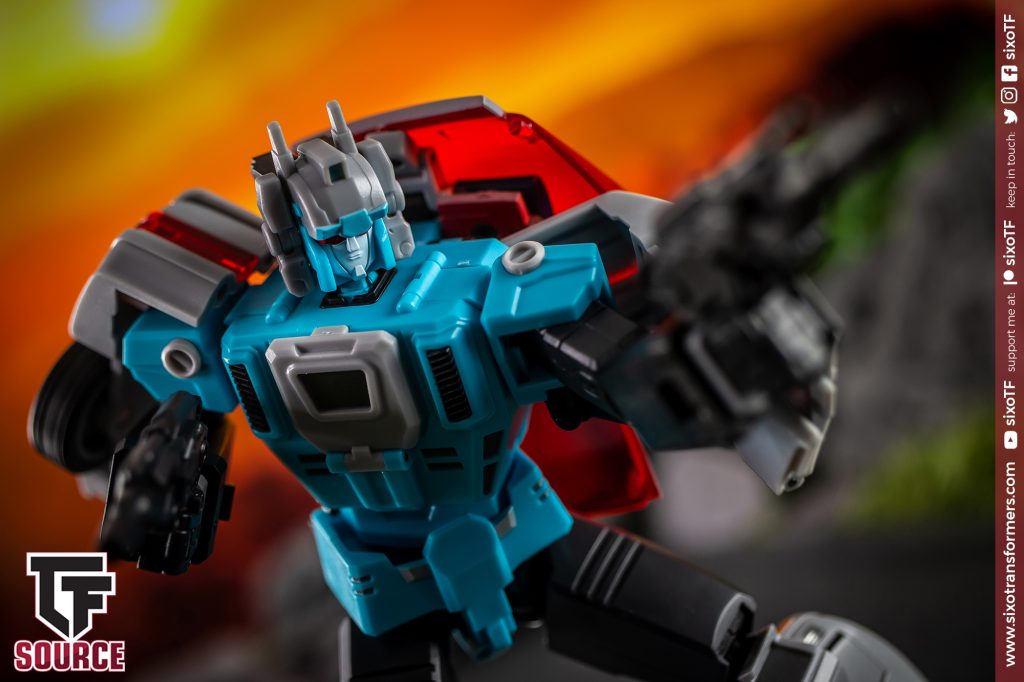 He then comes equipped with a twin pair of handheld blasters, which can be unfolded into shape if you’ve chosen to store them away inside the car mode and pegged fairly securely in his palms. They’re the finishing touch needed to make Red Buzzer look ready for action! 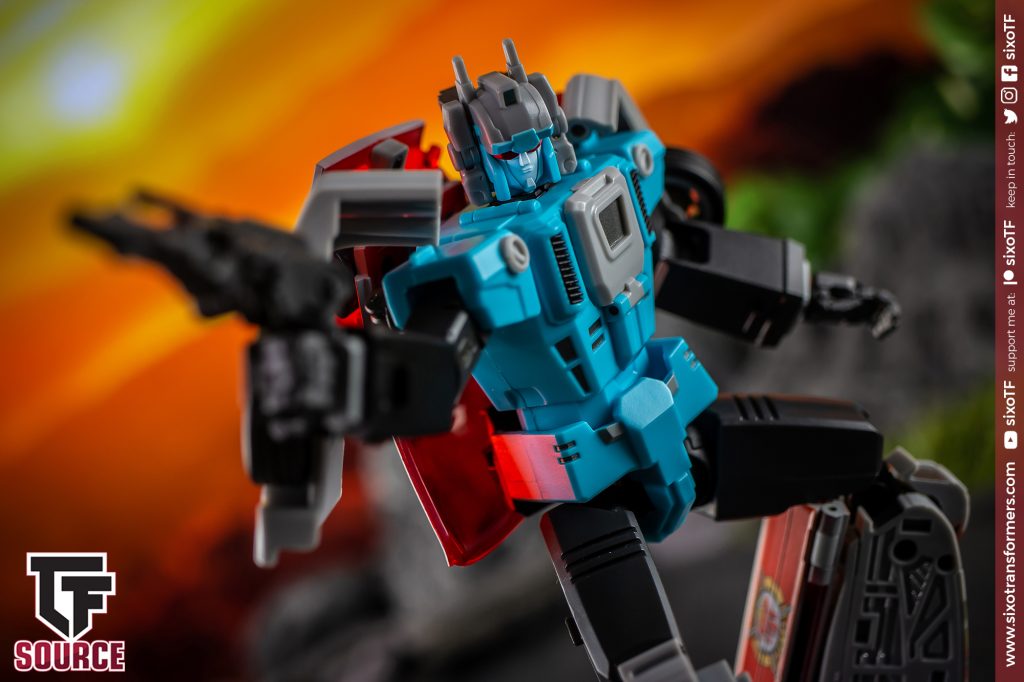 One thing I’m less keen on though is his hands, which have a good bit of movement to them but somehow never fail to look and feel just a tiny bit awkward for me. 3PMP hands are a very mixed bag at times and I have to be honest and say these are definitely not my favourite example, although they work well enough all the same and don’t detract from what a stunning lad he is overall. 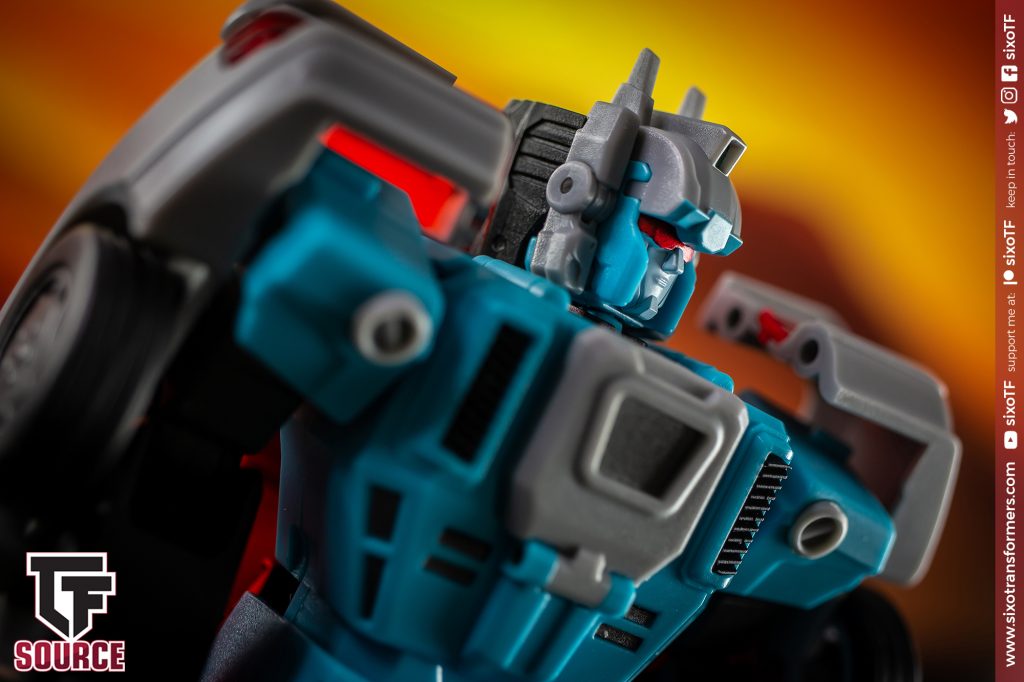 The head design is arguably the most stylised element of the robot mode on offer here and I suspect may be the bit that divides opinion on this release above all else. It’s certainly the most unmistakably Fans Hobby-esque flourish to be found here! For my money, I like how it looks and again, it feels much better defined than previous efforts such as Athena and Nite Walker. The red visor is also very striking. 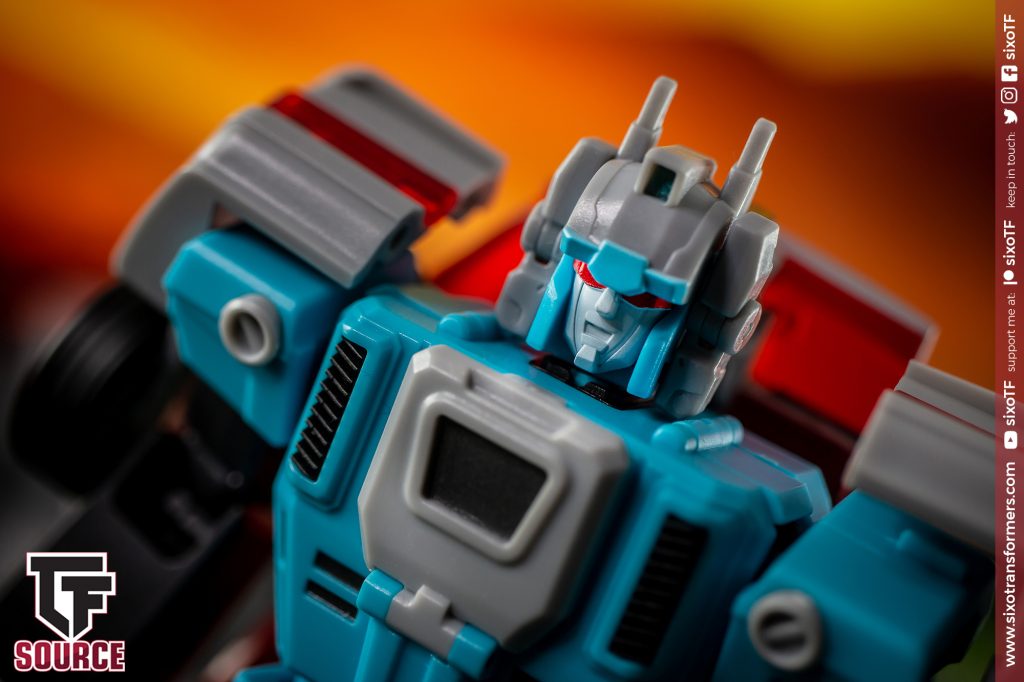 There is an alternate face option, which can be easily swapped out using a peg solution, and gives Red Buzzer an open-mouthed appearance. It’s not bad but leaves me slightly underwhelmed, such that I’m not sure I’ll be using it very much, to be honest. Still, it’s an option. 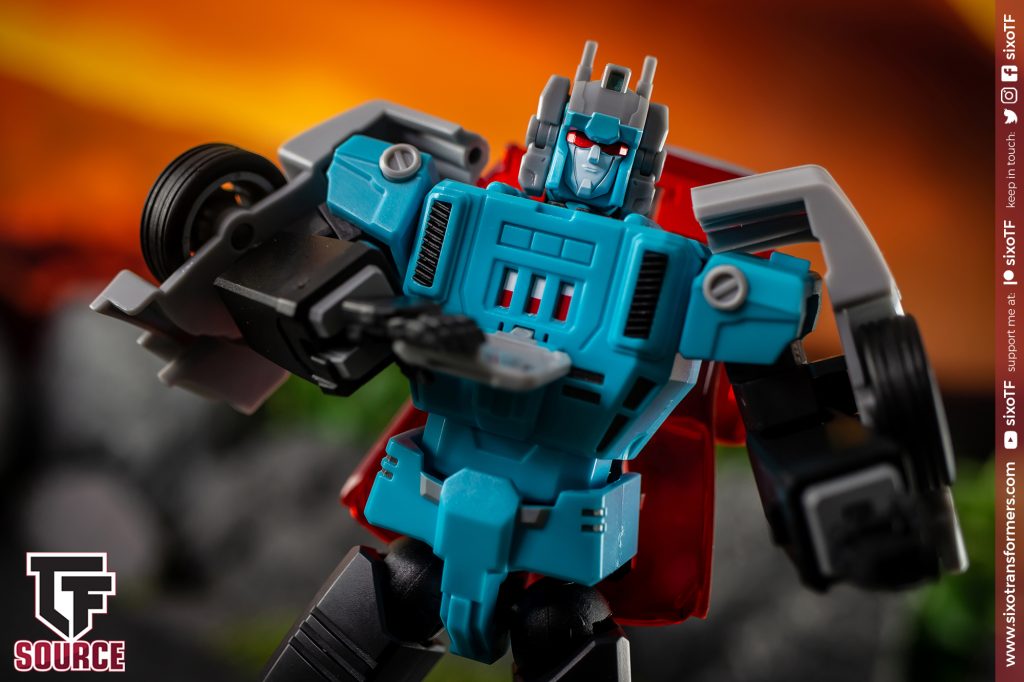 Then he naturally comes complete with a homage to the classic Headmaster tech spec gimmick, whereby folding down a panel in the chest reveals a set of stats meant to represent the character’s ‘speed’, ‘strength’ and ‘intelligence’ rankings. There is also a set of included stickers with this release (which I have opted not to apply, on this occasion), including an option to add a touch more colour here in a further nod to the gimmick’s more traditional appearance. 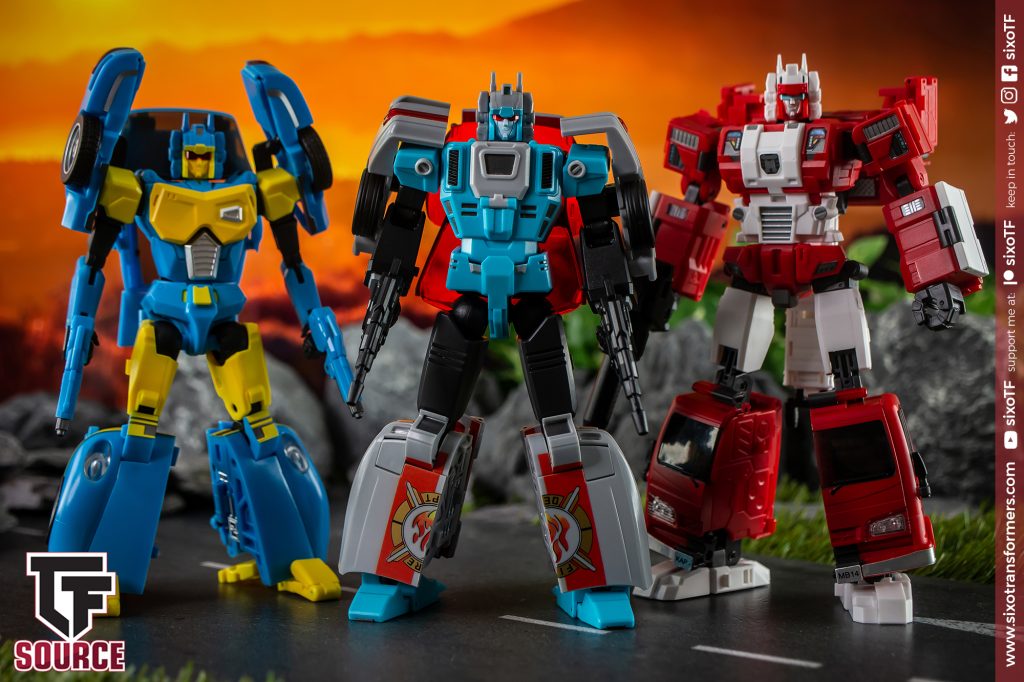 It’s just another way that Fans Hobby have paid attention to bringing these classic toys up-to-date, leading us to where we’re now able to assemble something resembling the complete 1988 Headmaster roster in new form! As I mentioned last time, I am sort of expecting them to release an alternate version of Kap to represent Hosehead, perhaps with grey parts instead of white, but for now at least, I’m very happy with how this line-up looks. 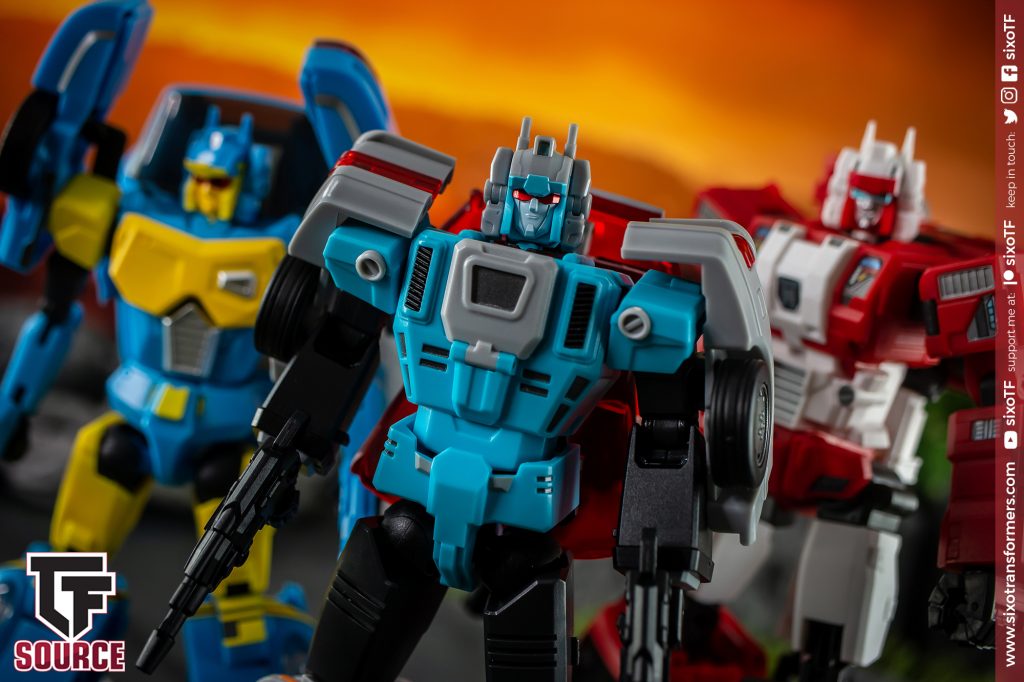 I think it’s worth acknowledging that we’re now at a point where relative C-list characters are being given 3PMP updates, and I’m saying that generously of these lads despite the fact that Siren and especially Nightbeat turned in memorable comics appearances over the years. Whatever your thoughts on these figures, you have to admit that it’s fantastic to see the characters given new life, especially as Fans Hobby could have just stuck with the Japanese equivalents and called it a day. 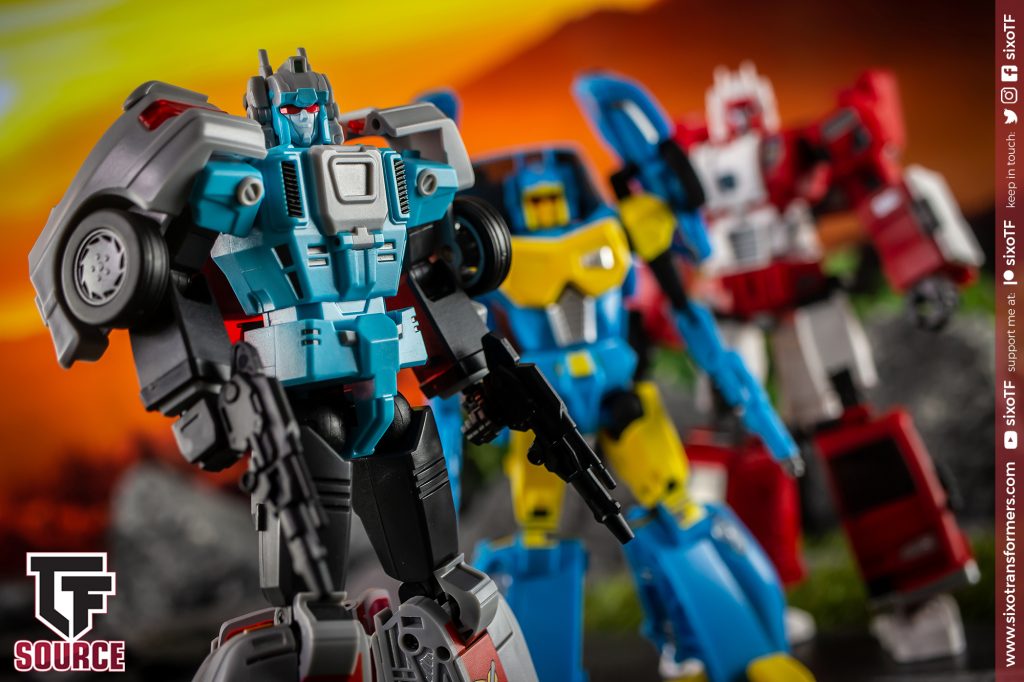 I get the strong sense that’s not who they are though, as there’s a lot of love for the franchise being poured in behind the scenes that kind of shines through in the end products too. Their designs may not be spot-on accurate to the source, but the vibe is there, regardless. 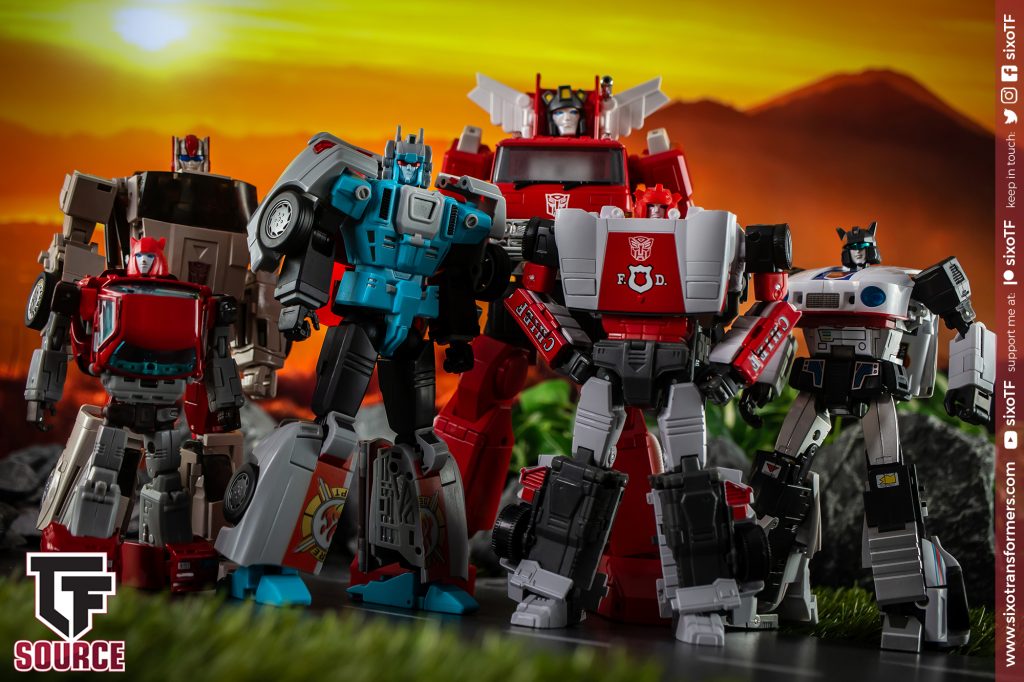 Besides, in the case of Red Buzzer, I think they have managed to craft a robot form that sits nicely enough alongside other Masterpiece-styled efforts, both official and otherwise. Their releases will always be some of the more stylised offerings on the market but I think this lad works well on a 3PMP shelf. 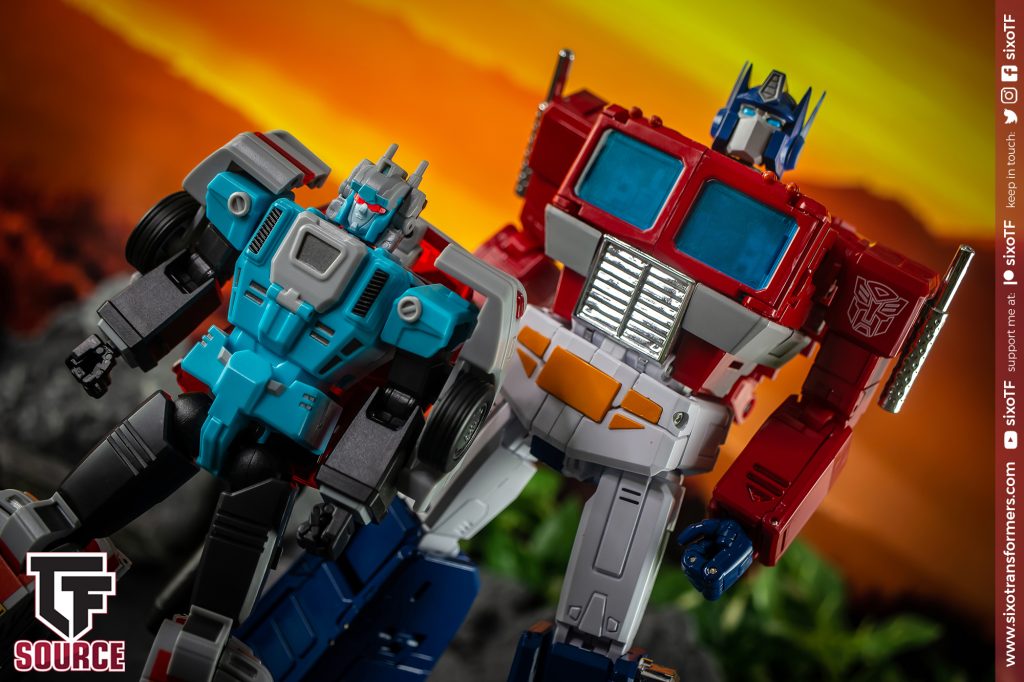 If nothing else, it’s great to have some new characters added to the proceedings, something which Fans Hobby are doing a cracking job at helping with. I only hope they continue apace and bring us yet more quirky choices outside of some of the Unicron Trilogy stuff they’re now dipping their toes into. 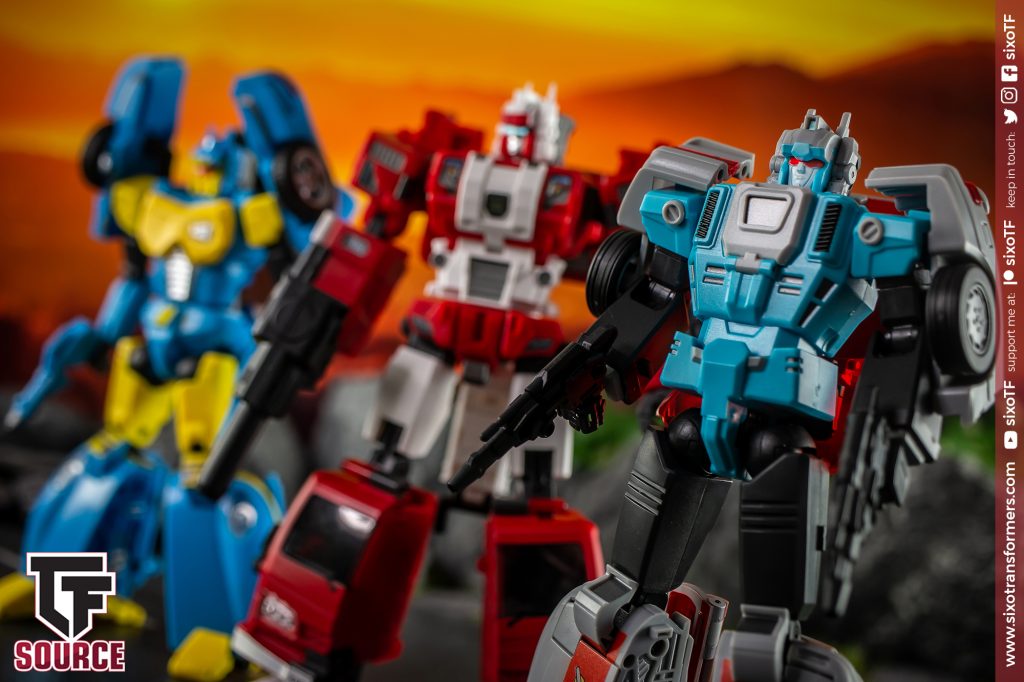 For today though, they’ve put out yet another solid release with Red Buzzer. He may be just a repaint with a funny name but I strongly recommend answering the Siren’s call.

WHAT’S NOT? I’m not majorly keen on the robot mode hands for one thing.