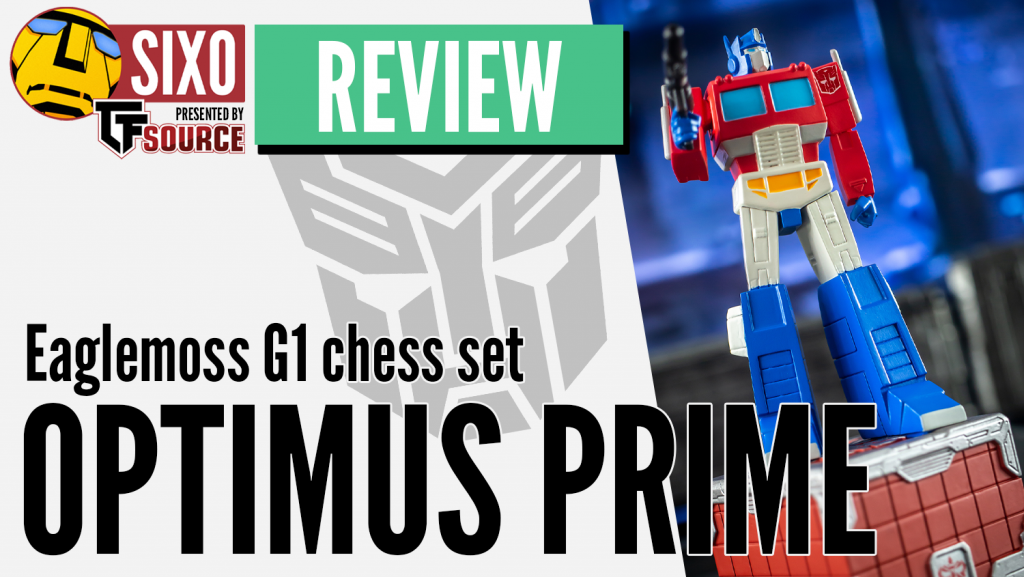 Transformers has always been a property that’s been ripe for merchandising. As far back as the early days in the 1980s, there’s been a reliable raft of related products beyond the actual toys themselves: everything from backpacks and lunchboxes to t-shirts, jigsaw puzzles and beyond. 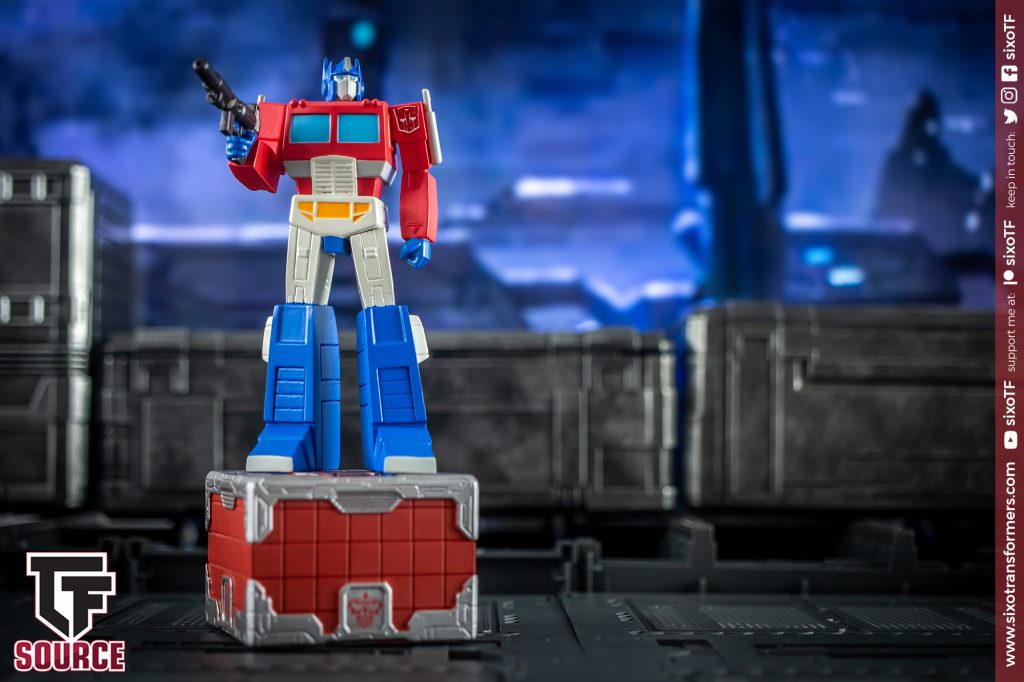 There has even been a chess set before, though one related to the big-screen live-action films (another era when merchandising of the franchise went through the roof, incidentally!). However, for the first time ever, we now have a glimpse of such a product in classic Generation 1 style, thanks to a new project from collectables manufacturer, Eaglemoss. 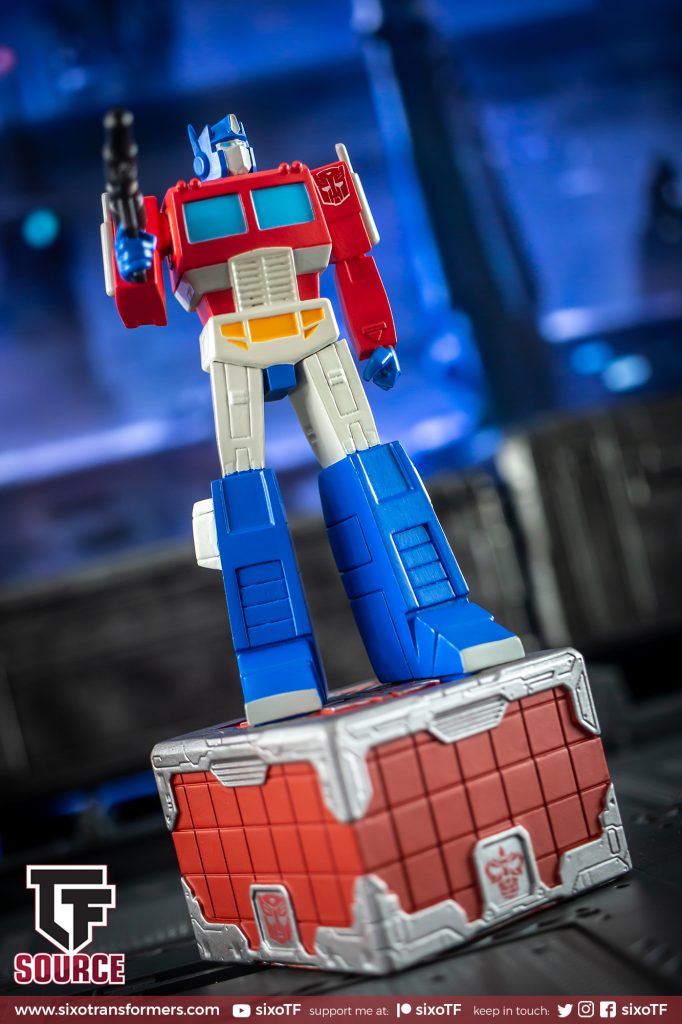 Available as a Kickstarter, this new chess set will heavily reference the style and character line-up of the original Transformers cartoon, and will feature 32 individually sculpted pieces atop a unique board and plenty of other goodies along the way (depending on how much backing the project receives anyway). 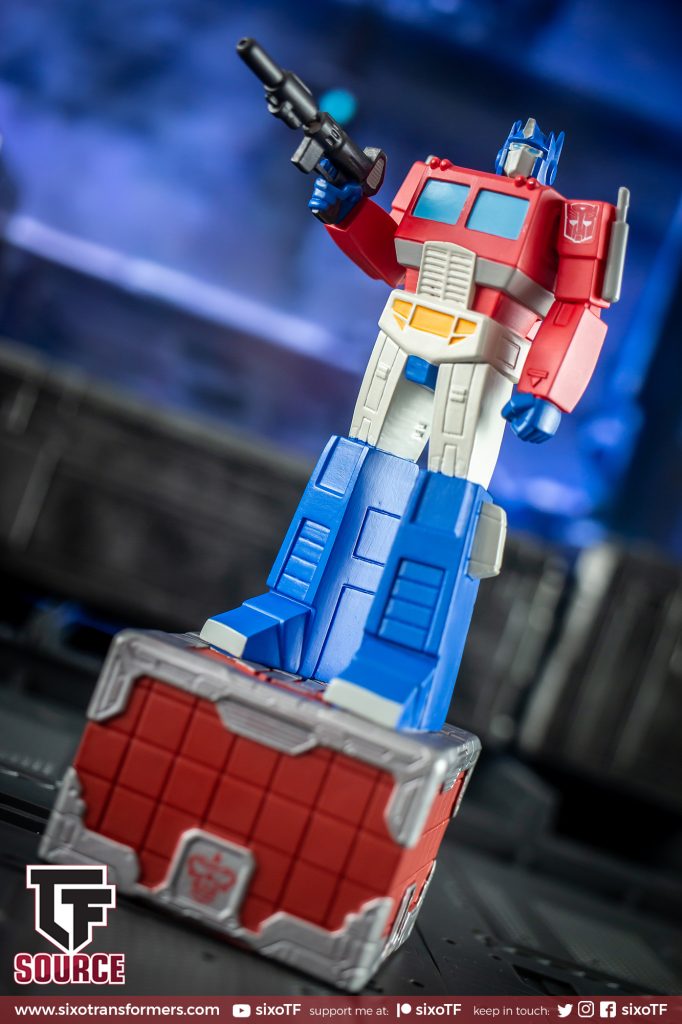 Well, today we have a bit of a sneak-peek in store as I have in hand a copy of the white king chess piece, which of course is none other than iconic Autobot leader, Optimus Prime himself! International chess Grandmaster, Savielly Tartakower once stated that “The blunders are all there on the board, waiting to be made”, but today we get to see if that’s true before the board has even been made! 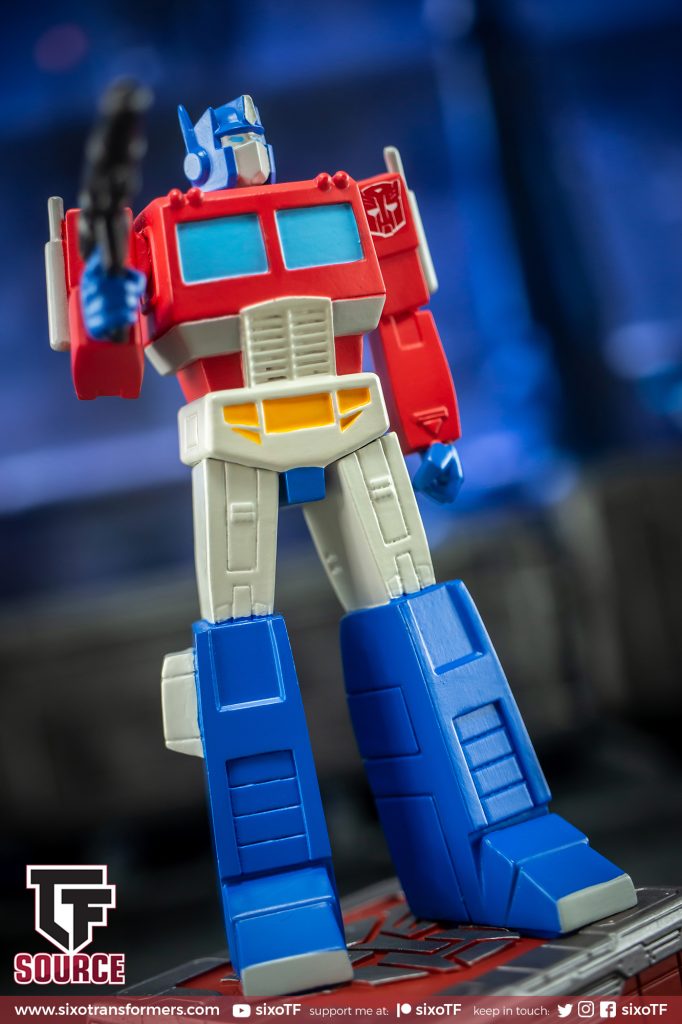 First thing to note is that it’s big! In fact, it’s a lot larger than I might have imagined at 6 inches tall, meaning that the full set assembled promises to be quite the sight, to say the least. It’s also very heavy, feeling suitably weighty in your palm like a real collectable should. 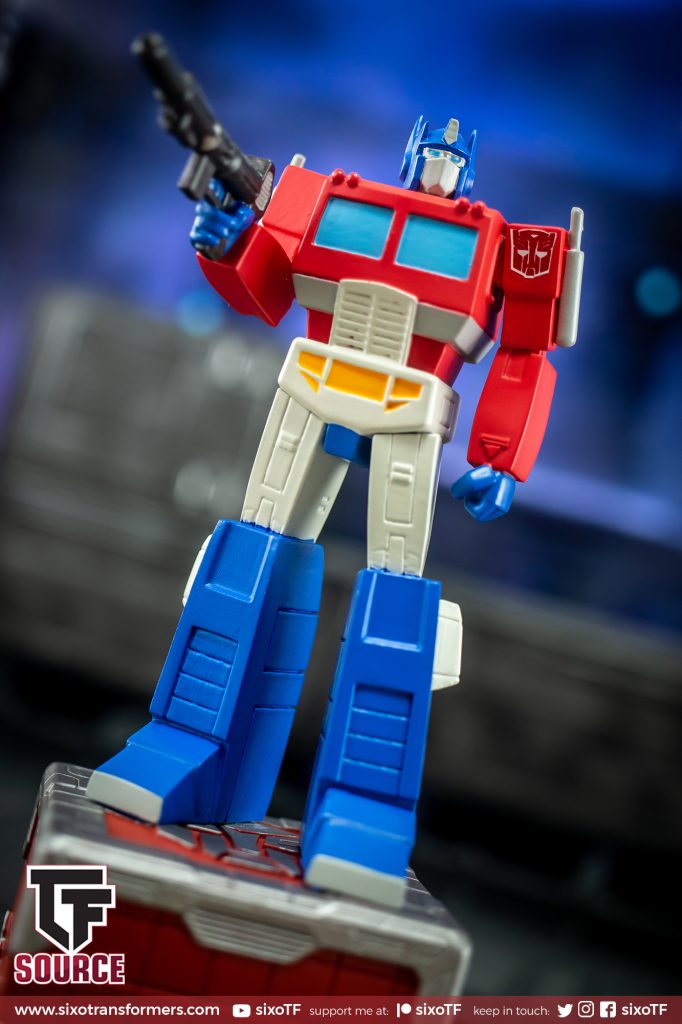 In terms of appearance, you’d be hard pushed not to recognise the character choice here, although clearly, Eaglemoss have swung hard into the animation aesthetic by keeping the sculpt very simple and cartoony overall. There’s a distinct absence of detail and plenty of flat surfaces that give off a real feeling of the TV show, whether that’s to your tastes or not. 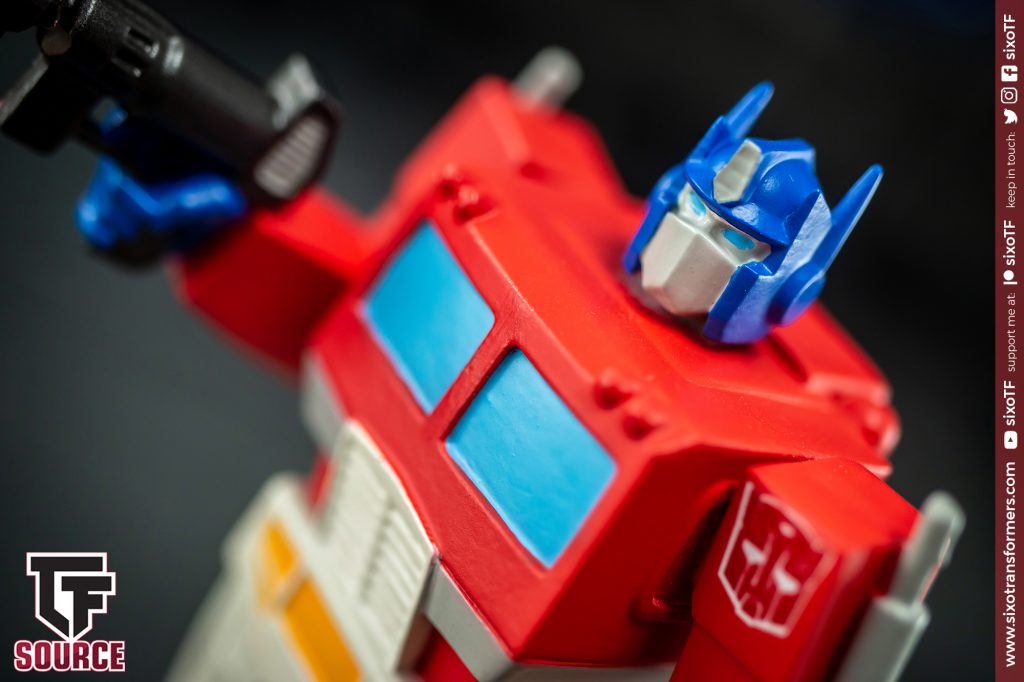 I say that because of course, recent TakaraTomy Masterpiece efforts have shot for the same goal with mixed reactions from some corners, although I suspect that something akin to this kind of curio will be seen as more acceptable in this style versus a high-end transformable toy. If anything, it looks very much akin to the aesthetic of the recent R.E.D. Optimus Prime release, albeit simplified. 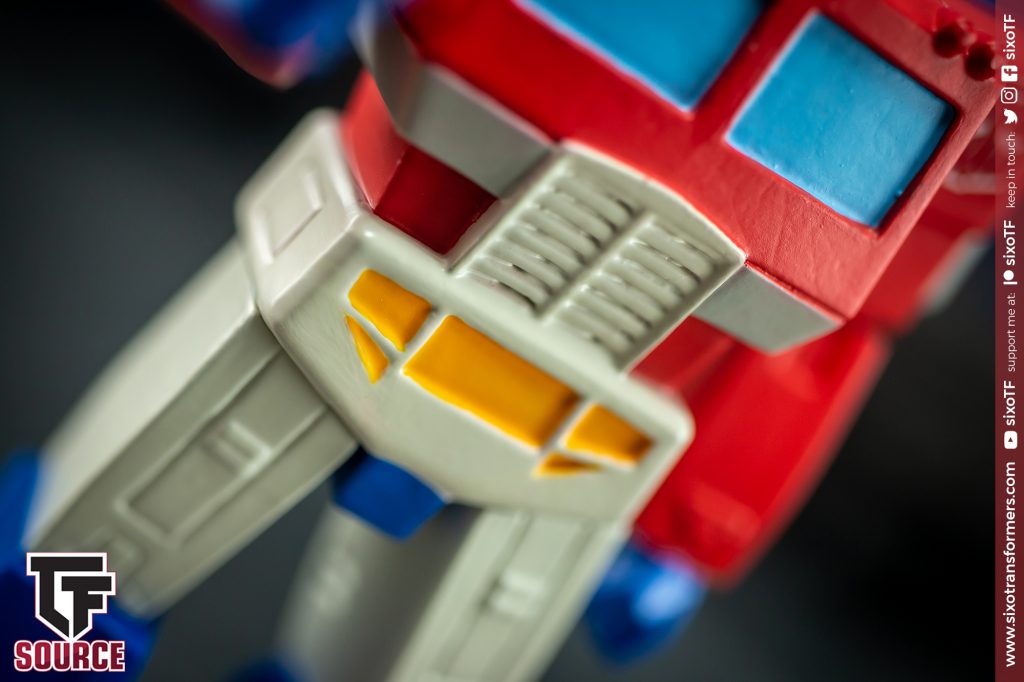 All of the key aspects of Optimus’ classic design are present and correct, mind, as noted when you compare the piece to the character animation model. Stuff like the grill on the chest and the crotch plate all look quite accurate for starters. 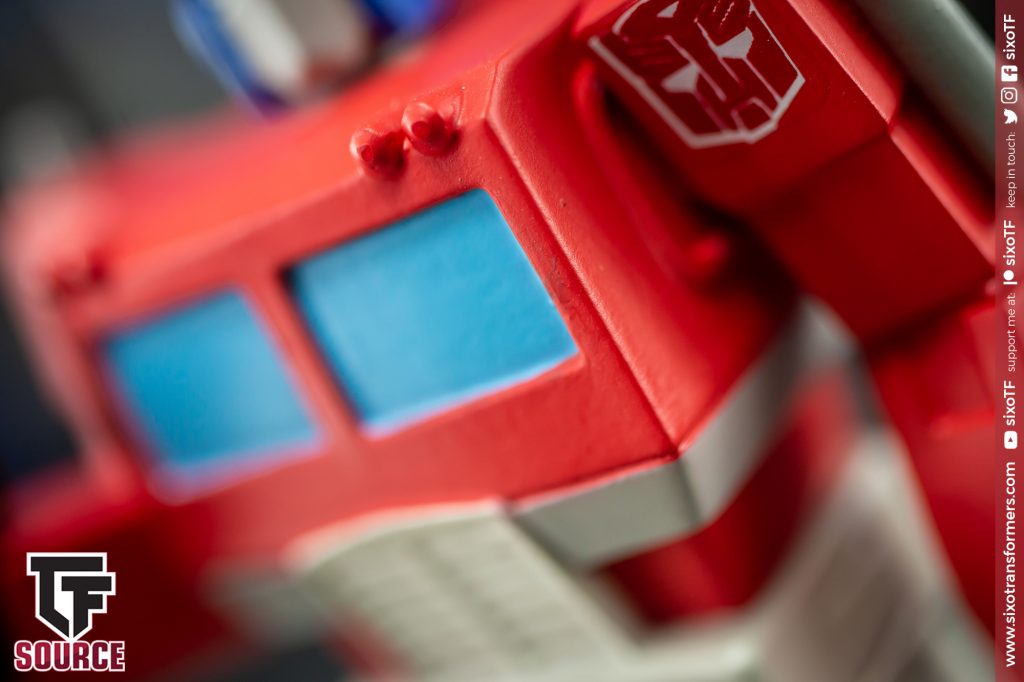 That’s also true on areas such as the chest, although here you can see just how uncomplicated the sculpt is in certain areas, with strong block colours, sparse moulded detail and a distinct absence of greebling. It works for the model and the size it’s at, though. 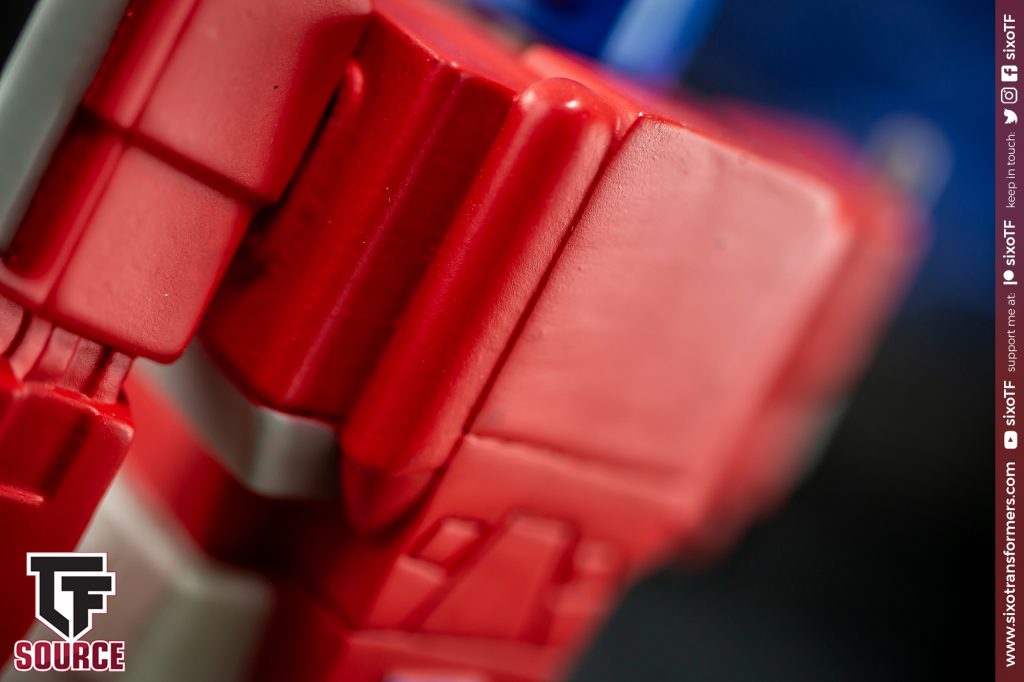 Clearly, Eaglemoss have done their homework though, as the full 360-degree view of the character feels on-point to the animation, including the backpack. 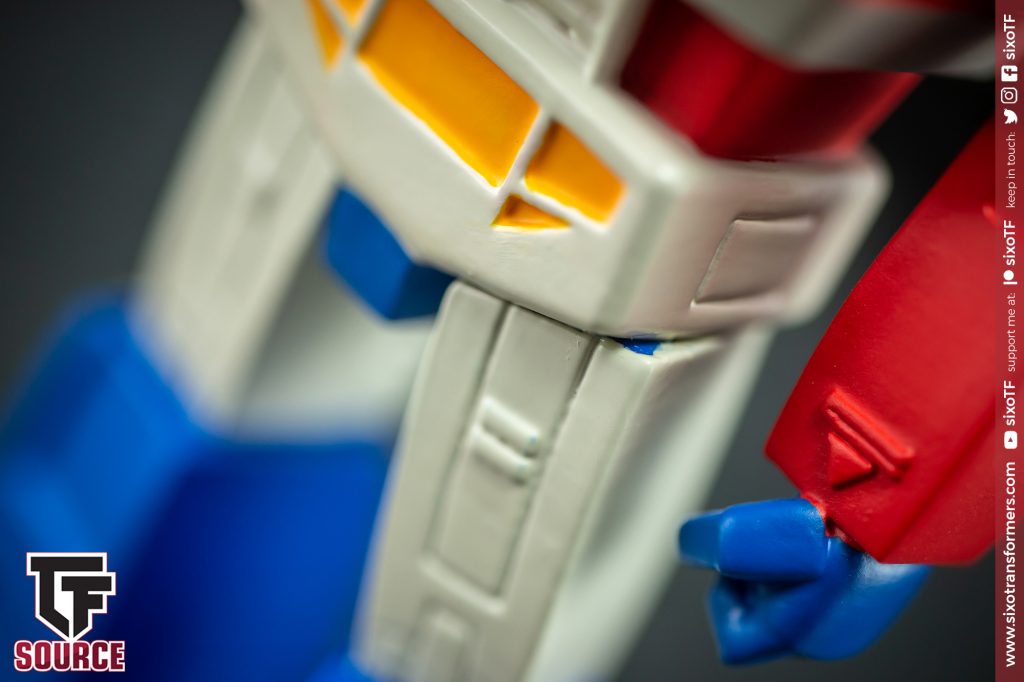 You’ll even see some accurate sculpted detail on areas such as the thighs, with all the various panel lines matching the source material, although on my copy you can also see how the left leg juts out a little at the top and seems to be missing a touch of paint to hide it. It’s not the most noticeable thing in the world, but still hard to miss once you spot it. 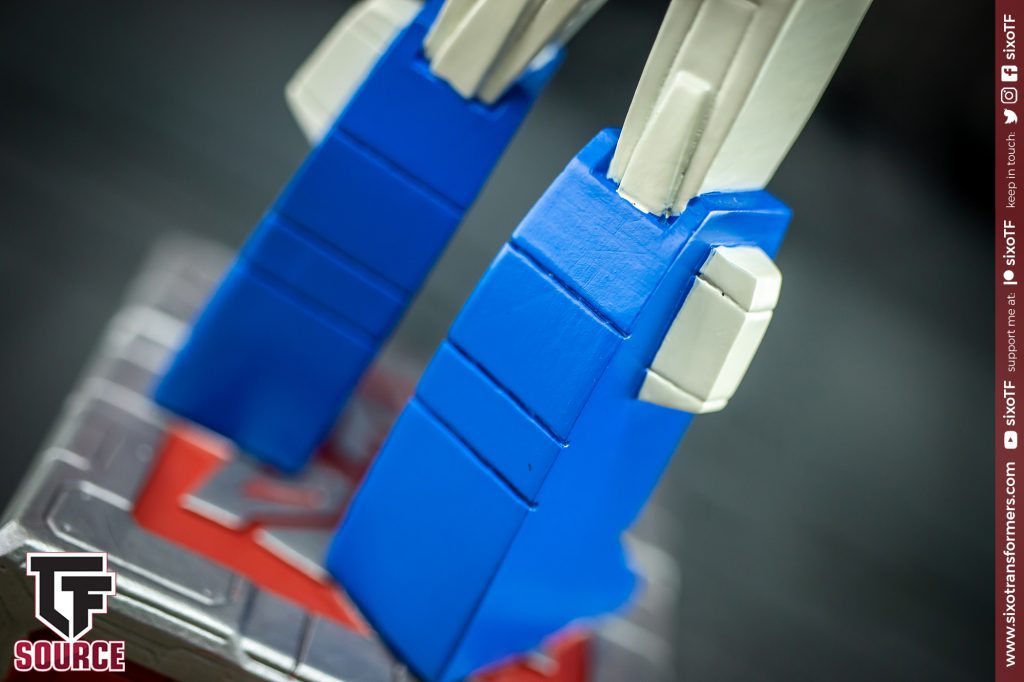 In fact, once I started pouring over the rest of the figure, I noted a couple of other areas where the painting could be considered less than stellar, with the edges of the blue on the back of the legs being a little indistinct, as one example. 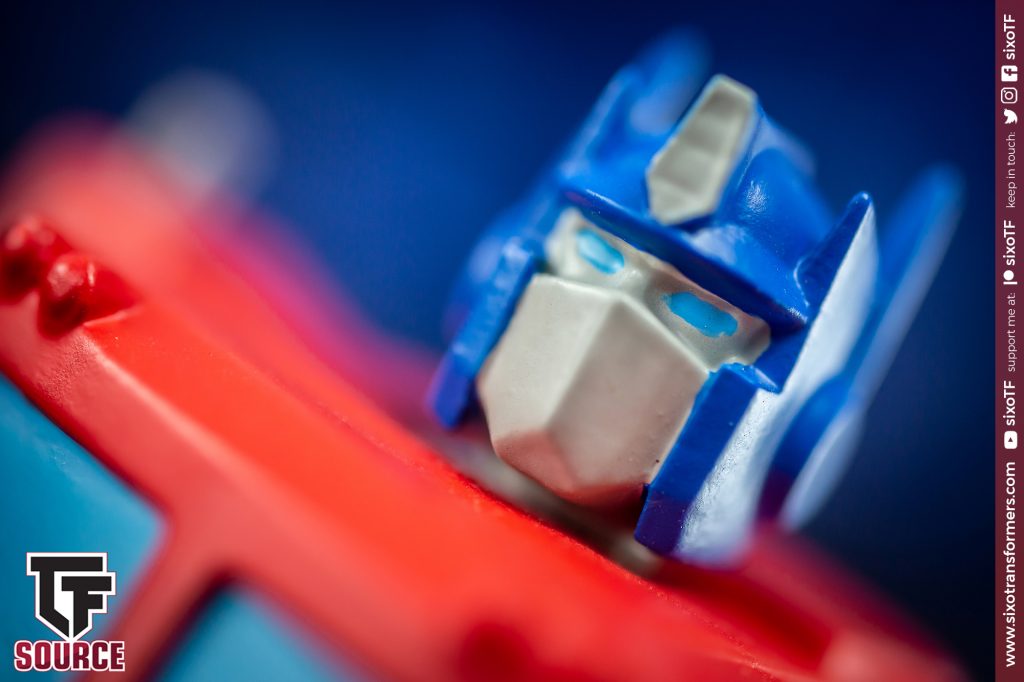 I also found the head to be a little ‘soft’ in how it’s moulded as well, as I couldn’t help but feel it might benefit from some stronger and more defined lines to really make it feel like the character in question. The eyes are a little blotchy too, in my opinion. 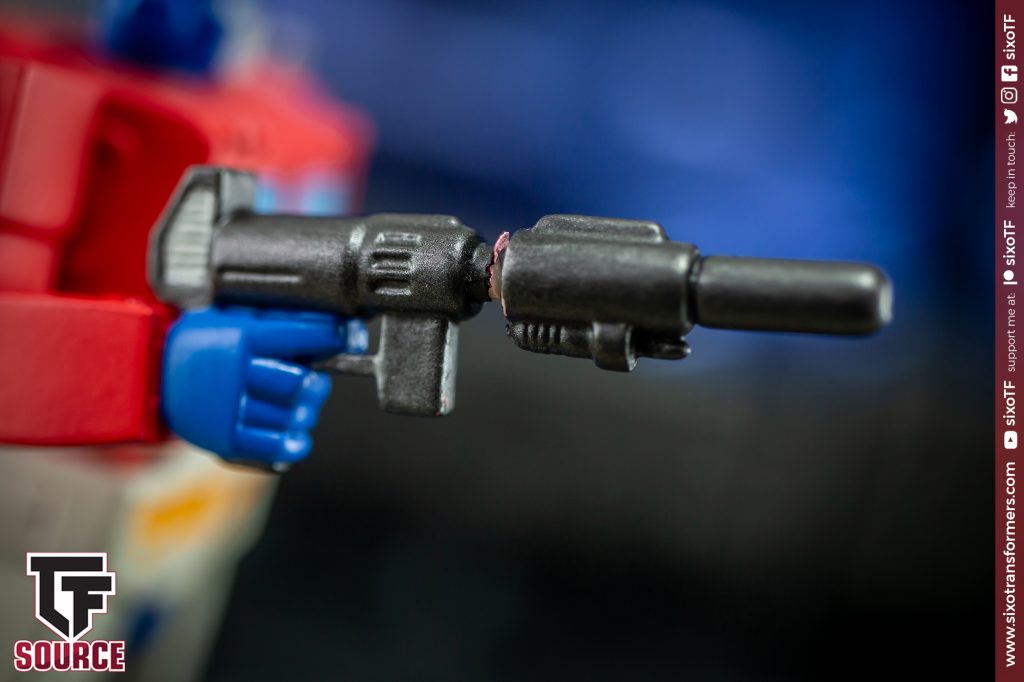 Sadly my biggest grumble is the rifle, which arrived out of the box with a noticeable break on the mid-section just before the barrel. It hasn’t snapped off at all, but I fear a bit of force would be enough to do it, so I’ve been extremely careful to avoid that! Hopefully, this is a bit of an early pre-production issue and not evident of the final product. At this stage, it strikes me that Eaglemoss still have plenty of time to ensure that’s the case. 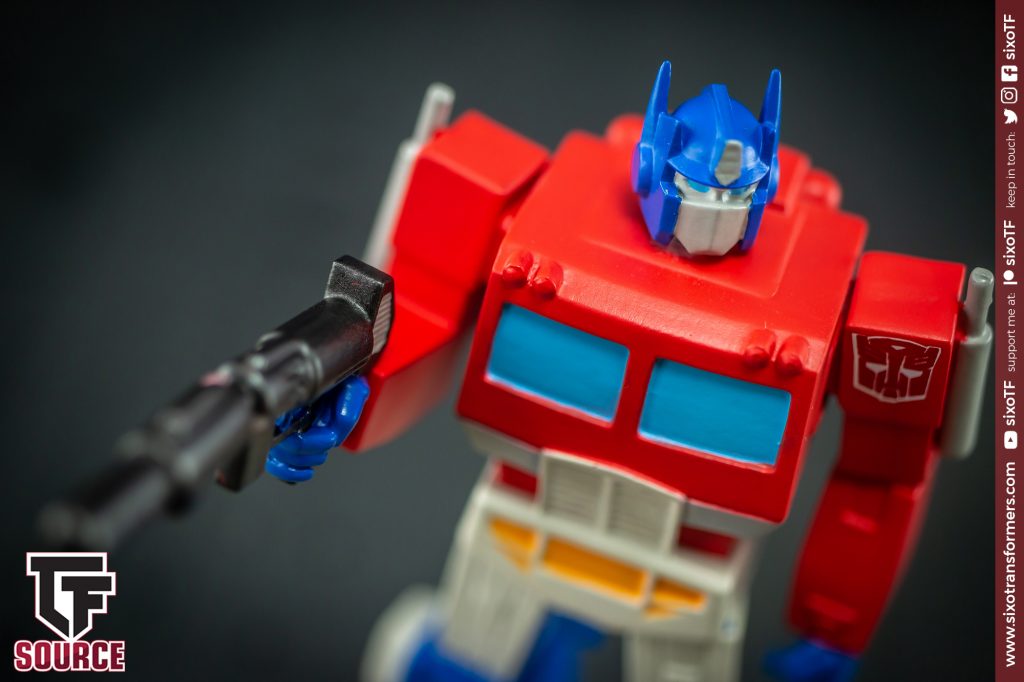 I will say that the gun problem led me to think that it’s a slightly strange pose they’ve chosen for Optimus, really, as they could have opted for him to have his rifle down at his side. This would have avoided the slightly precarious nature of the one arm sticking out and being prone to wear but also would have brought the whole thing more in line with the animation model on which this figure is clearly based. I guess the idea was to have the gun pointing forward as a sign of action, although sometimes I think simpler is better. 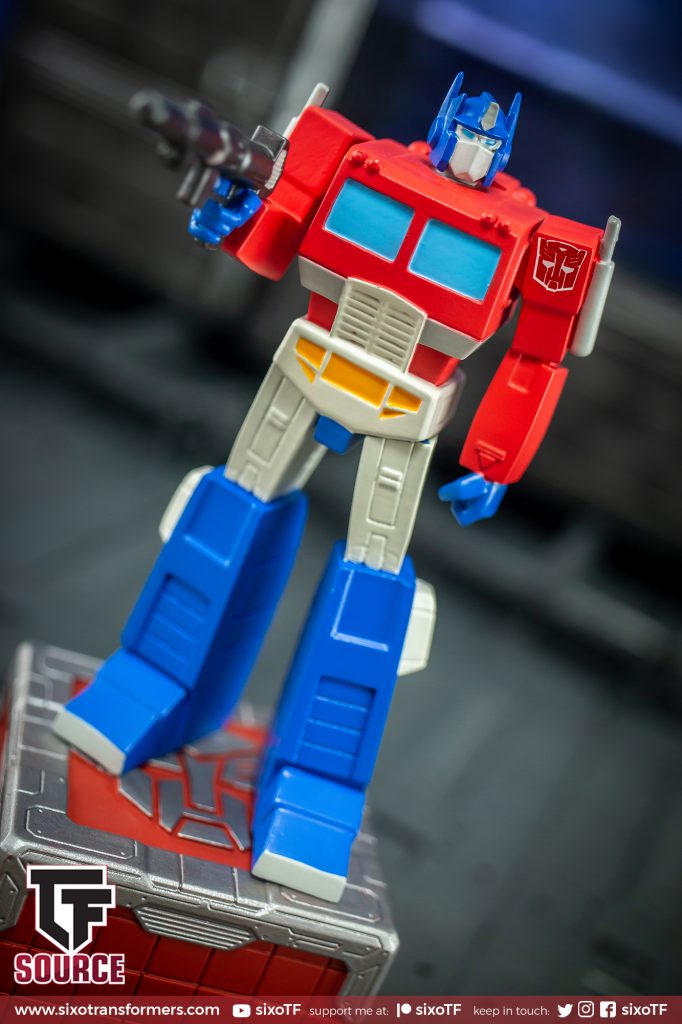 Anyway, as a representation of Optimus, I do like the overall style that they’re going for here and no doubt it comes close to being a faithful take on the character as seen in the animation. However, it stops short of being too impressive just on account of some of those finer details and the finish. 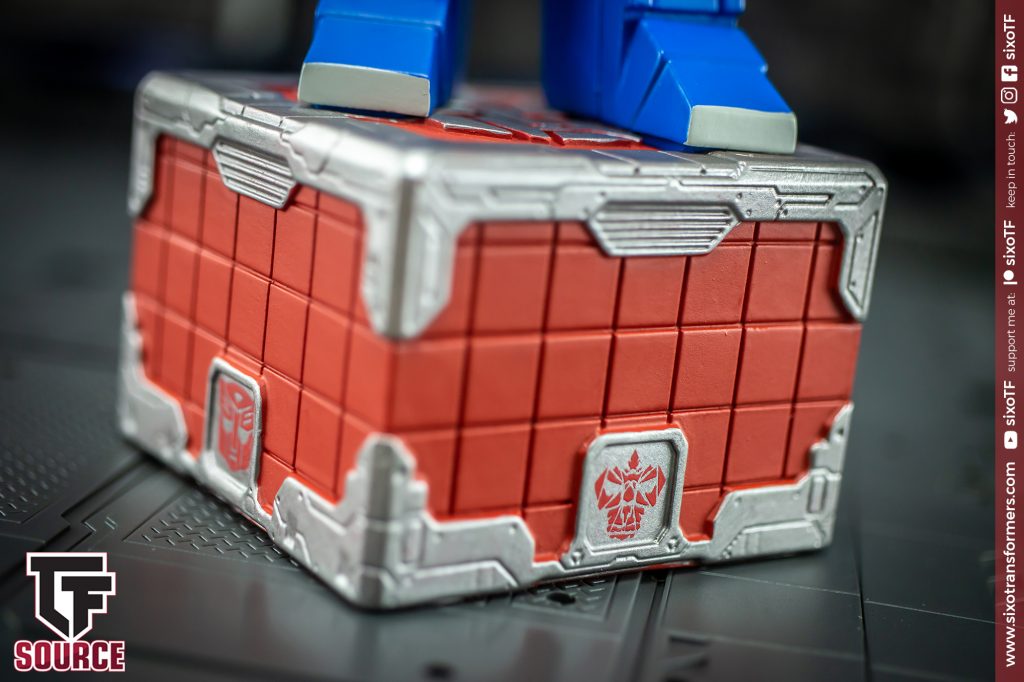 Then the whole thing is mounted atop a fairly intricate-looking box. In comparison to the character itself, this has a fair bit of moulded detail going on and looks pretty good on the whole, in my opinion. The idea here is evidently to help identify the various pieces on the board, as you’ll see the clear presence of Autobot logos on the base, but also a ‘king’ logo in the same style. It’s a neat touch and I like the whole concept quite a bit. 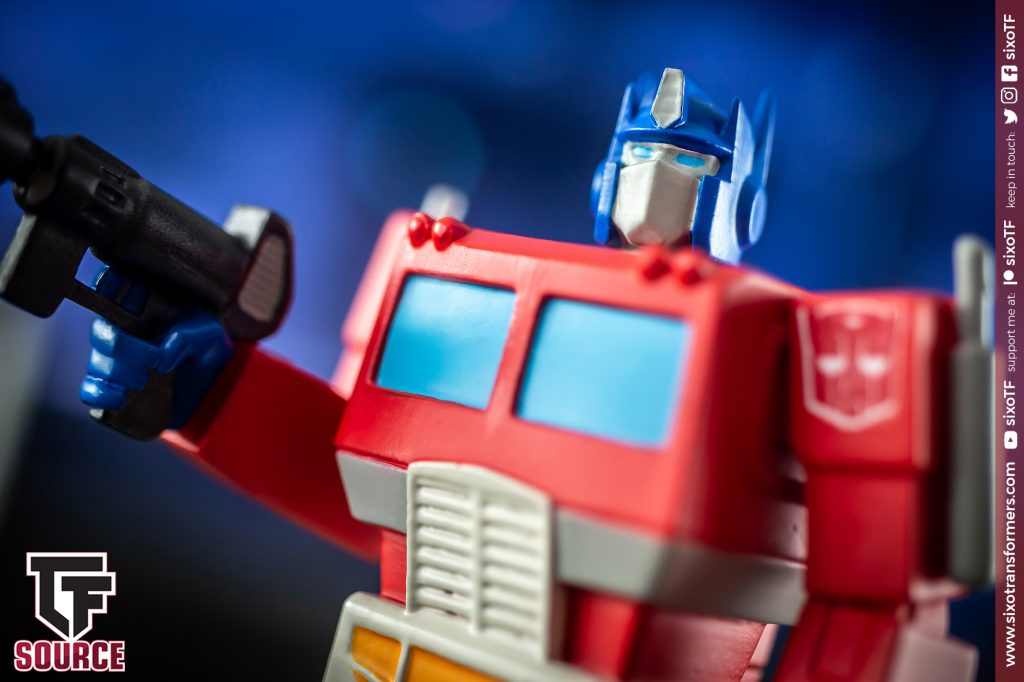 Ultimately this is just a very quick look at one piece from a much larger set that will contain thirty-one others, not to mention the board and all the other accoutrements that go with it, so it’s hard to judge as an ensemble at this stage. I have seen a lot of discourse about the price of the Kickstarter project overall, with a fair few collectors baulking at the proposed total, just as I have seen people doing the maths and breaking down what each piece would feasibly be worth to conclude that it’s not so bad. 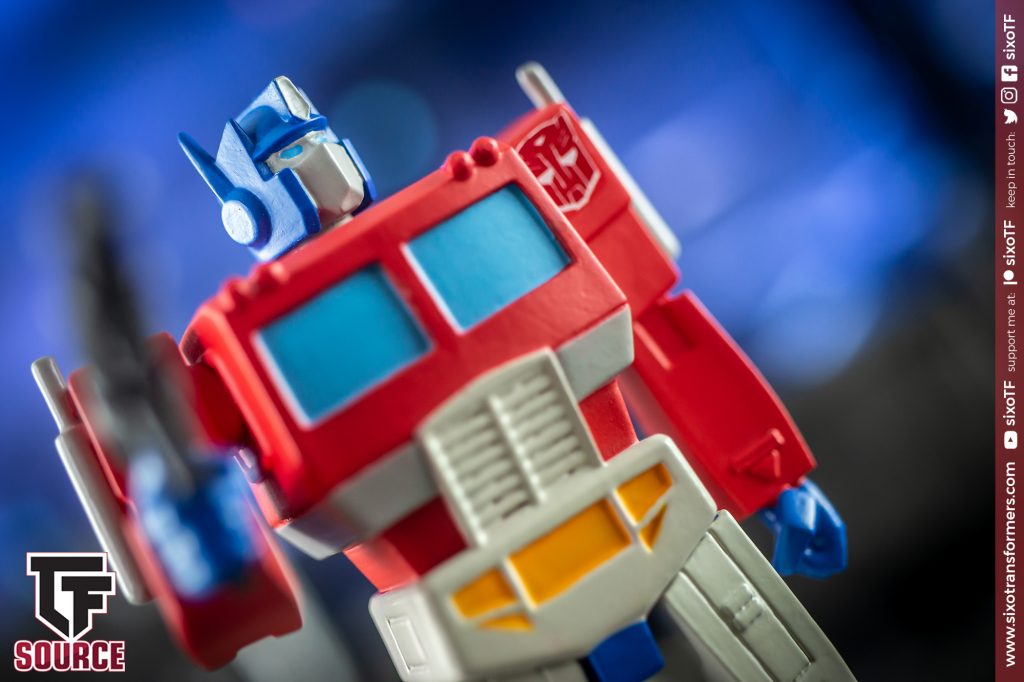 Ultimately then, is it worth it? Only you can really answer that question, although I would say that I’d at least hope to see Eaglemoss paying close attention to some of the finer points of finish here before the day is done (not to mention that broken gun situation). 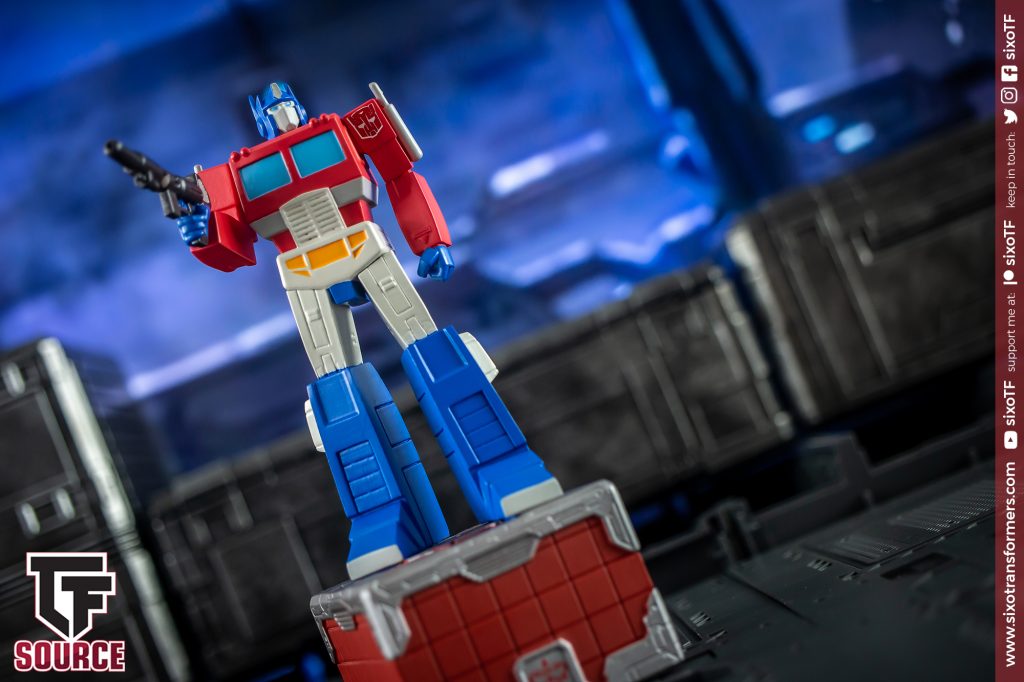 So, a preview of a potential purchase to come or simply a fun look at a project you’re happy to pass on? Your move, I suppose.

This entry was posted in Source Reviews Tagged with Eaglemoss, Optimus Prime, Review