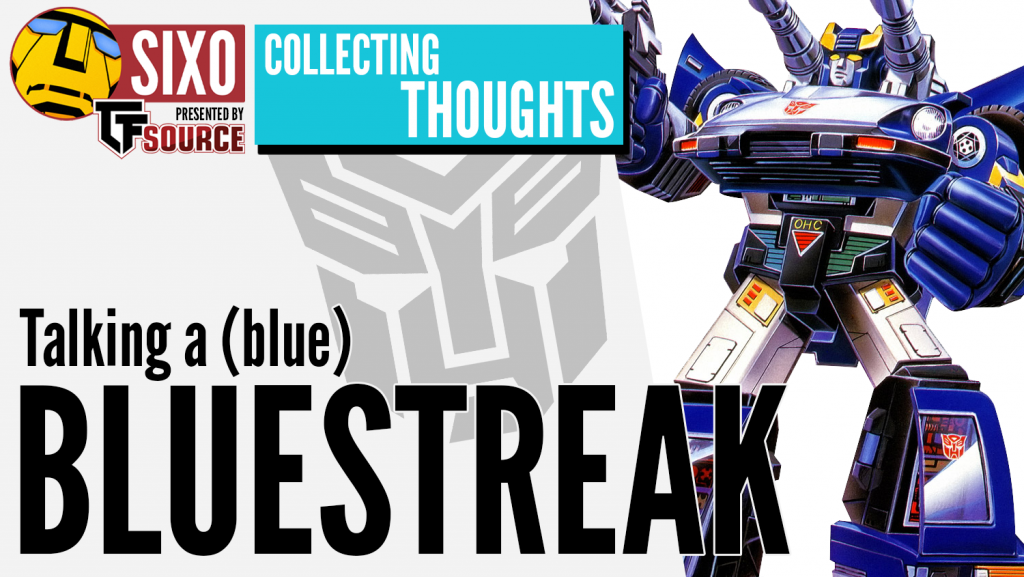 I woke up to discover one of my favourite online phenomena today – a Transformers toy ‘digibash’ causing untold mayhem.

For those not entirely au fait with my cool Internet toy collecting vernacular, a digibash is when someone takes an existing photo of a particular figure and digitally manipulates it in some way, whether to alter its appearance very slightly or to make it look completely different. They’re rarely created with the actual intent of deceiving anyone and exist more to demonstrate fan ideas in an visual manner, but that doesn’t mean they don’t cause a lot of confusion (and disappointment for those not in the know!) from time to time.

So, what was today’s main offender? 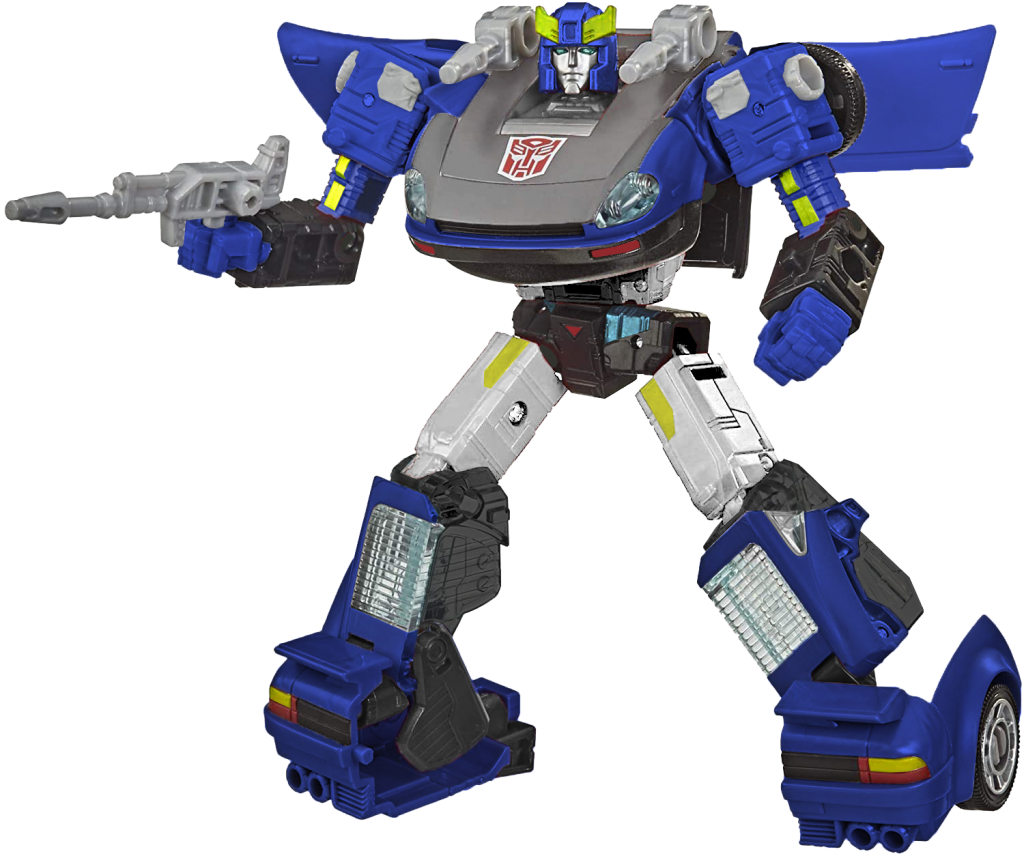 Yes, by the time I had even finished my morning coffee, I’d seen this image of an apparent ‘Generations Selects blue Bluestreak’ being shared at least a half dozen times, although fortunately the debunkers started swarming the scene just as fast. The elation to disappointment wave was particularly efficient in this instance.

However, it was telling just how excited people seemed to be for this idea in particular. New toy joy is not an uncommon occurrence on the Interwebs, but the concept of a Generations blue Bluestreak was one that people were especially keen to hop on board with, which in some ways is weird because… well, Bluestreak isn’t actually blue all that often is he? 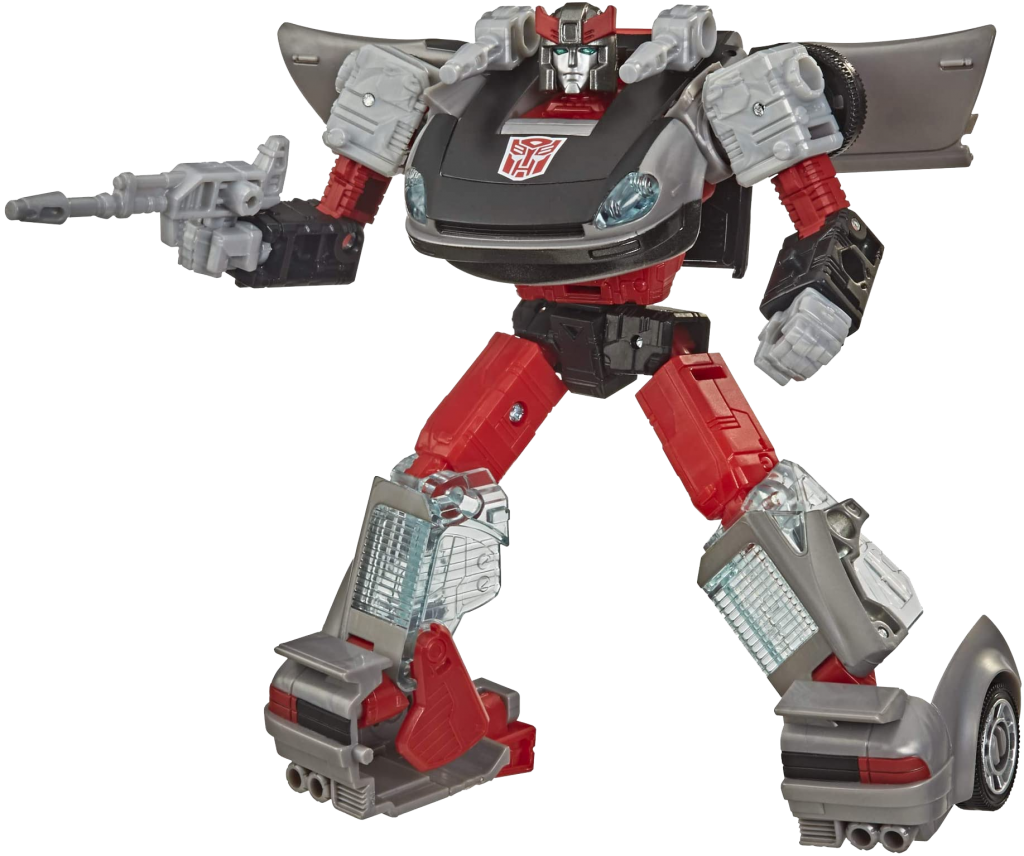 Here’s the original image, which shows the Earthrise toy in the character’s more familiar colour scheme of grey, black and red. It’s now become exceedingly common for Bluestreak to sport this look almost by default, despite his name provoking ideas to the contrary. It wasn’t always this way, although the very idea of a ‘blue Bluestreak’ remains a bit of an enigma in Transformers, even after all these years. 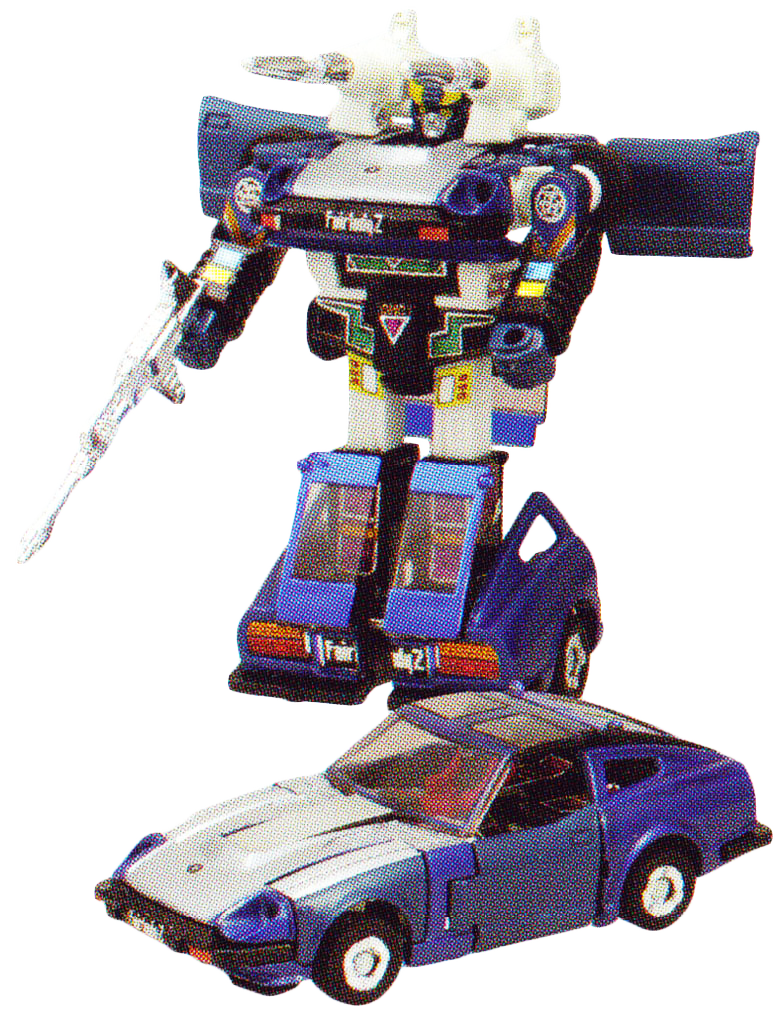 Of course, our story begins prior to that, as part of the TakaraTomy Diaclone line. There, the Fairlady Z toy was the seventh release in the Car Robots subline that would eventually serve as the inspiration for much of what became Transformers, and it was indeed released in blue first of all! It’s a sight that continues to inspire delight in collectors almost forty years later, especially as it was the last time this toy design would ever be released in the colour, despite many rumours to the contrary. 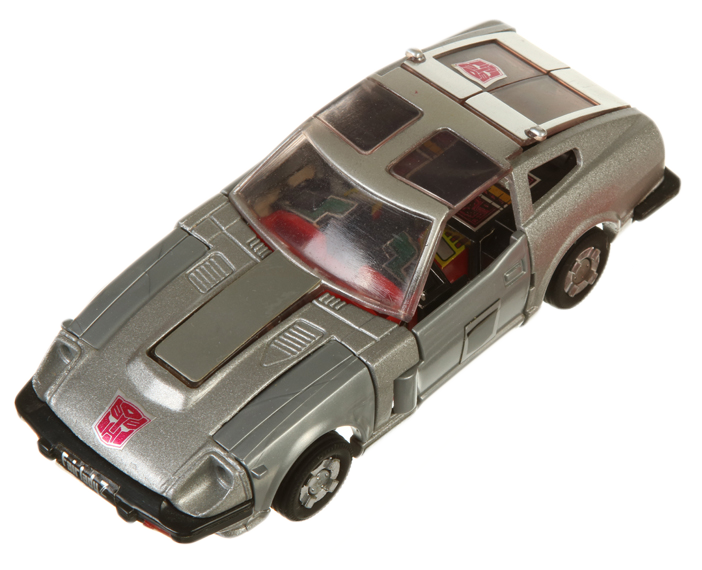 Yes, by the time the Transformers line had begun in 1984, things looked very different, as the toy now known as ‘Bluestreak’ was rather ironically no longer blue. However, it didn’t quite look like the modern colour scheme either, as it was missing the signature black bonnet section in favour of an entirely silver theme. So, what happened? 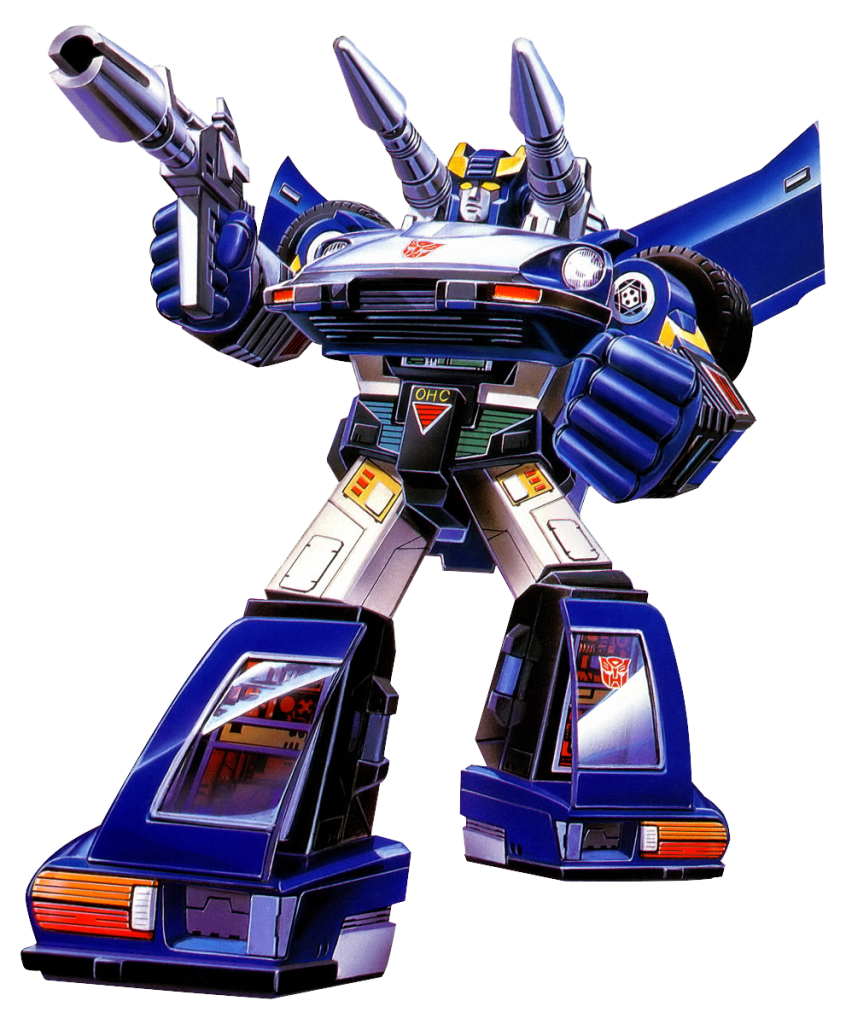 Well, the mystery is compounded by the 1984 toy being released in packaging still featuring plentiful evidence of its original colour scheme. The character artwork on the front of the box was only slightly tweaked from the Diaclone release and all of the product photography features the blue toy as well, including the instructions and both the side flaps and the transformation sequence on top of the box, which would have been incredibly misleading at the time! Perhaps it’s no surprise that rumours of a blue Bluestreak variant existing in Transformers packaging were rife for many years, with the mythic item often considered the ultimate ‘holy grail’ for many a Transformers collector. To this day there has never been any evidence of such a release actually existing, however. 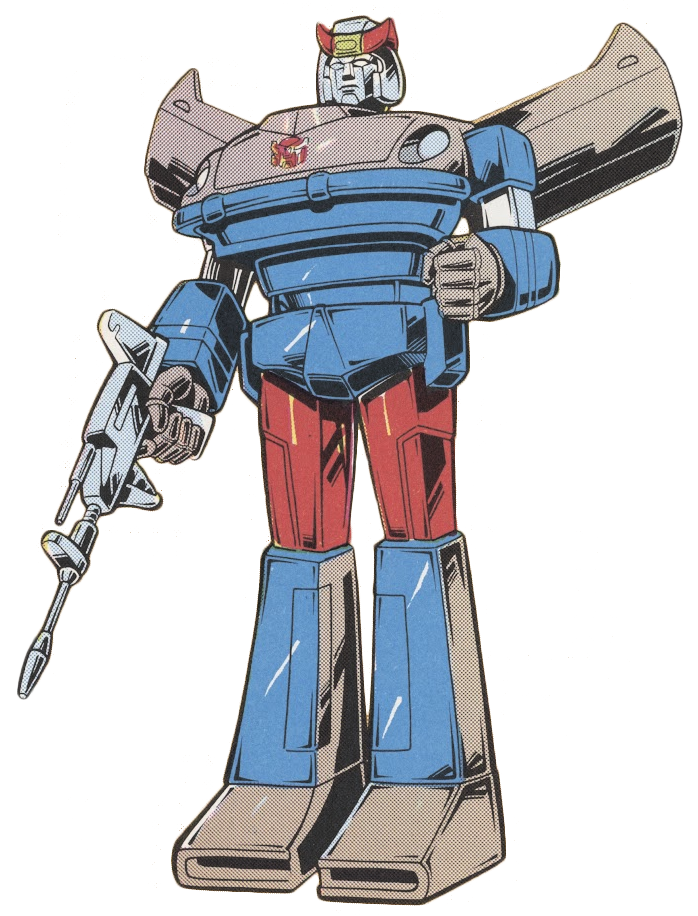 Things only became more strange when it came to Generation 1 fiction, as there were several different interpretations of Bluestreak’s colours across various media. The Marvel comic was the source that erred the closest to the toy by giving him a predominantly silver appearance, although interestingly they used a lot of blue to portray the areas that were black on the original toy. This was common for comic artwork at the time but it still added another layer of complexity to Bluestreak’s already convoluted tale.

All told though, the comic portrayal kept things surprisingly faithful, which by itself is bizarre when you consider what a departure some of the other characters from the time were versus their respective toys. 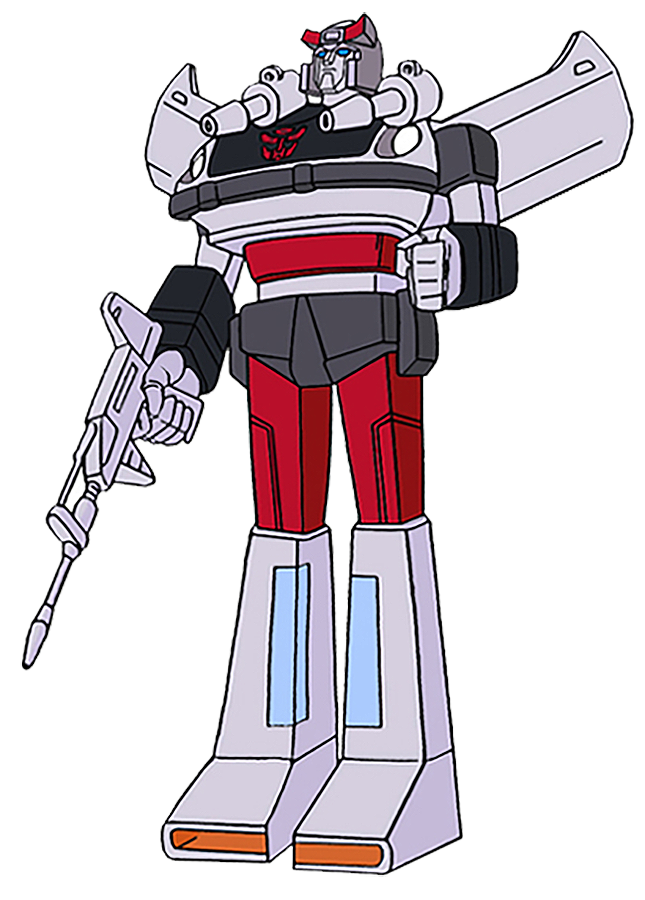 Then we come to the real fork in the road, as Bluestreak’s cartoon appearance completely mixes it up yet again by not matching either the 1984 toy or his blue Diaclone appearance. Instead, we now have the colour scheme that has become the defining take on how the character is represented even today, no doubt as a result of the cartoon’s popularity and dominance amongst Transformers media.

The black bonnet and two-tone paint job are all too evident here, creating an arguably more distinctive look beyond the pure silver of the corresponding toy. Where did the inspiration for this pain job come from, however? 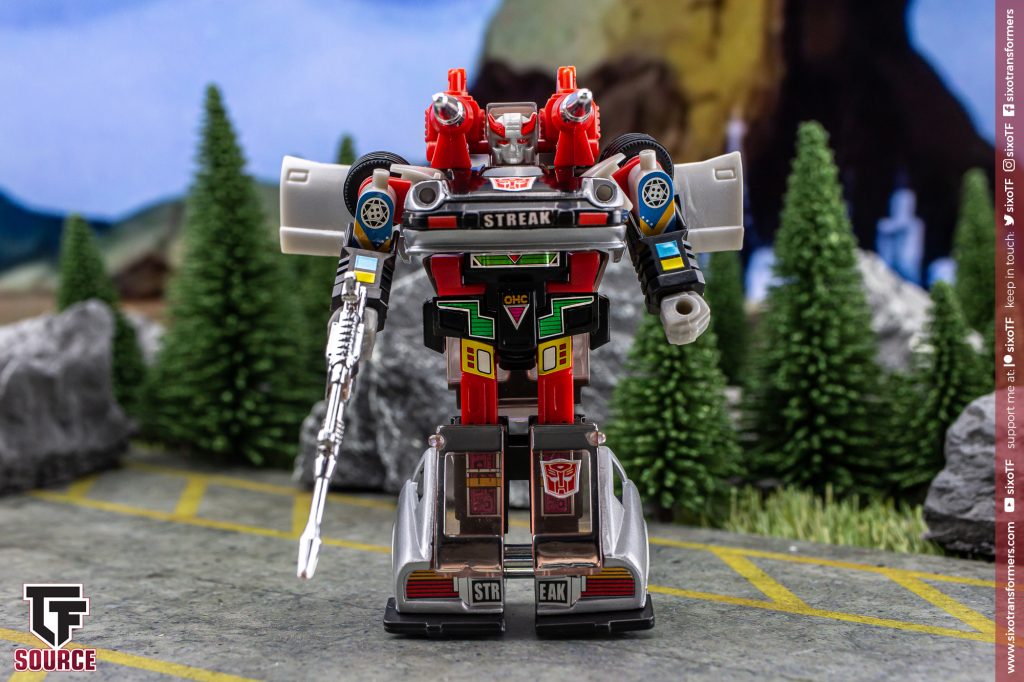 Well, the answer is simple. There was a second release of the toy in Diaclone in a variant black, silver and red colour scheme, much more in line with what we now associate with Bluestreak. It seems as though despite this deco being abandoned alongside the main blue version when the toy was repurposed for Transformers, it remained the inspiration for the cartoon during development. Thus this variant pre-Transformers toy became the canonical look for the character in the minds of many young minds. 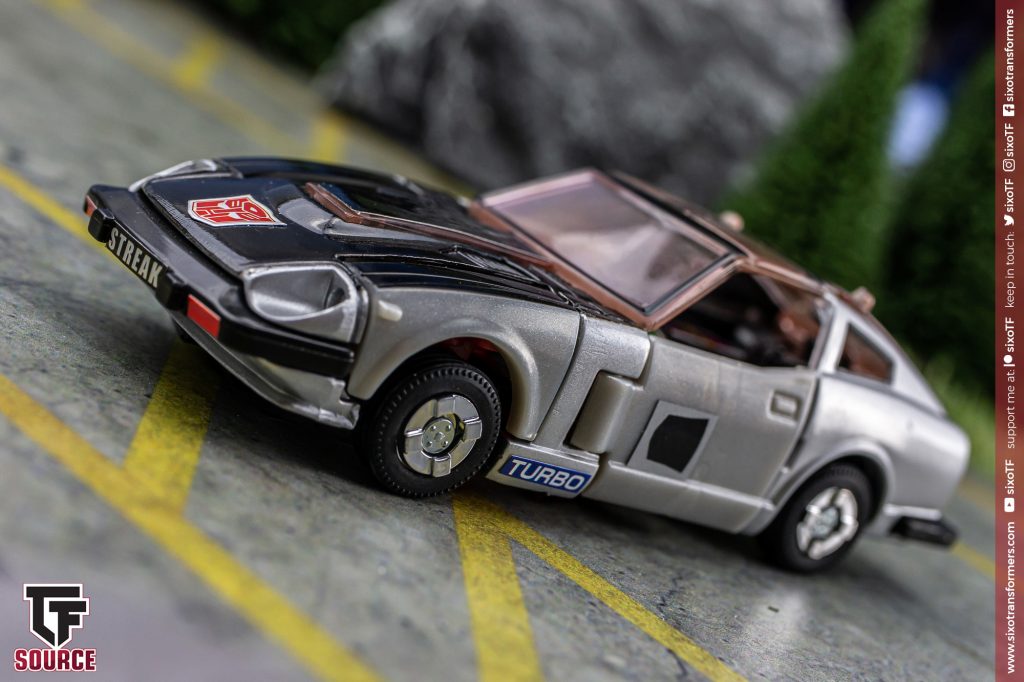 There is evidence that the cartoon’s creators considered all three options for Bluestreak’s appearance in the show, although why this choice was made above representing the actual Transformers version of the toy is unknown! A homage to that original Diaclone colour scheme would eventually make it into the Transformers toyline, although not until 2002 with the e-HOBBY-exclusive Takara Collector’s Edition release.

So, blue Bluestreak was never a thing in Generation 1, of that we can be certain. But where did the character’s name come from then, and does it imply that the colour scheme was at least considered for release at one point or another? Well, whilst in theory it’s possible that Bob Budiansky was given a blue copy of the Diaclone toy to work from when he was creating all of the original Transformers’ name and character profiles, it seems much more apparent that it was a simple reference to the colloquial American phrase, “to talk a blue streak”, implying that someone is speaking very fast. This is even supported by Bob’s original notes presenting the character’s name as two words, ‘Blue Streak’, so it may not have been a reference to the toy’s colour at all.

EDIT: Bob has since kindly commented on the subject in response to this article and it seems like he may well have had the blue version of the Diaclone toy after all!

Blue Streak must have been blue in the early stages. The painted art on the original toy box shows him as having blue components, even though the toy is grey. So I worked with whatever I was given, even though Hasbro apparently changed color scheme later. 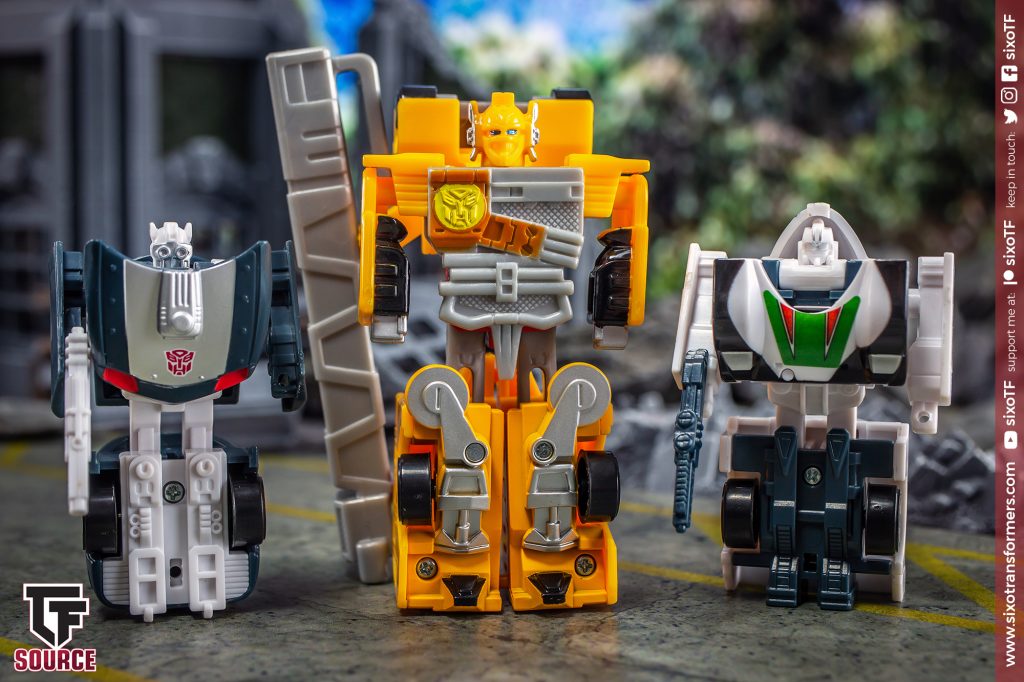 Still, the idea raged on – Transformers fans aren’t one to forget, you know! – and for many, the notion of a blue Bluestreak remained an attractive, if elusive ideal! There was a sort-of nod towards it in 2004 with the Universe line putting out a repaint of Robots in Disguise Side Swipe in a colour scheme fairly closely modelled after the Diaclone toy, even complete with the sparkly silver bonnet! However, in a somewhat cruel twist of fate, the toy was named Silverstreak (used instead to avoid trademark issues). 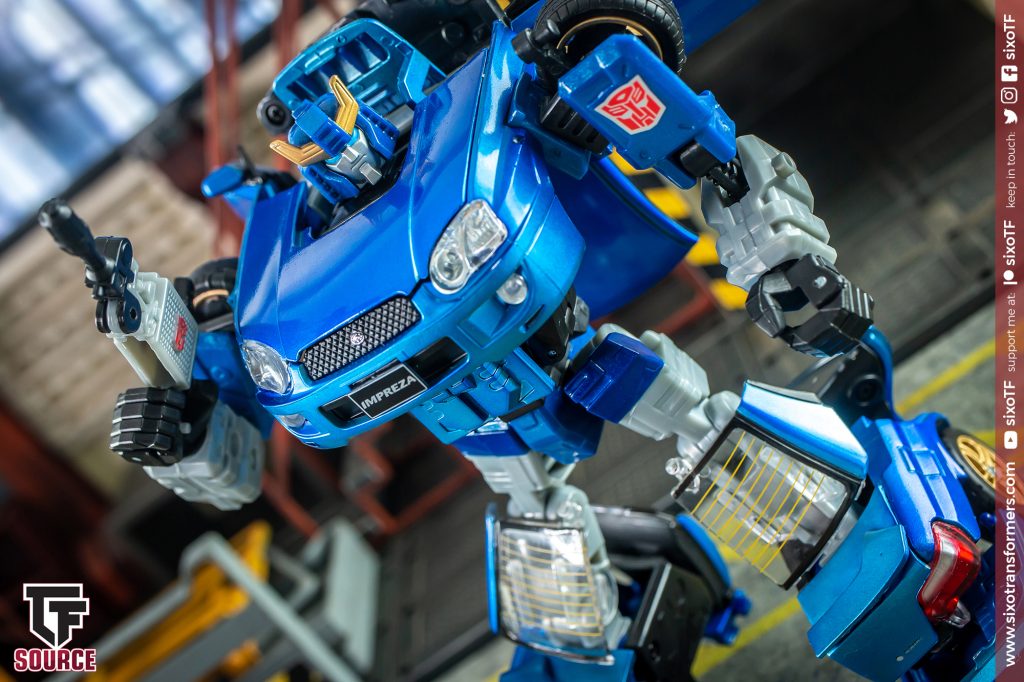 It wasn’t until 2008 that the Transformers line put out its first actual blue Bluestreak toy, during the latter days of the re-emerged Binaltech line, no less. BT-19 is weird in itself, as although it’s a straight-up repaint of the previous BT-03 Silverstreak toy, it was written off by a lot of fans as a de-sponsored version of BT-01 Smokescreen somehow, and the two have been frequently confused since. 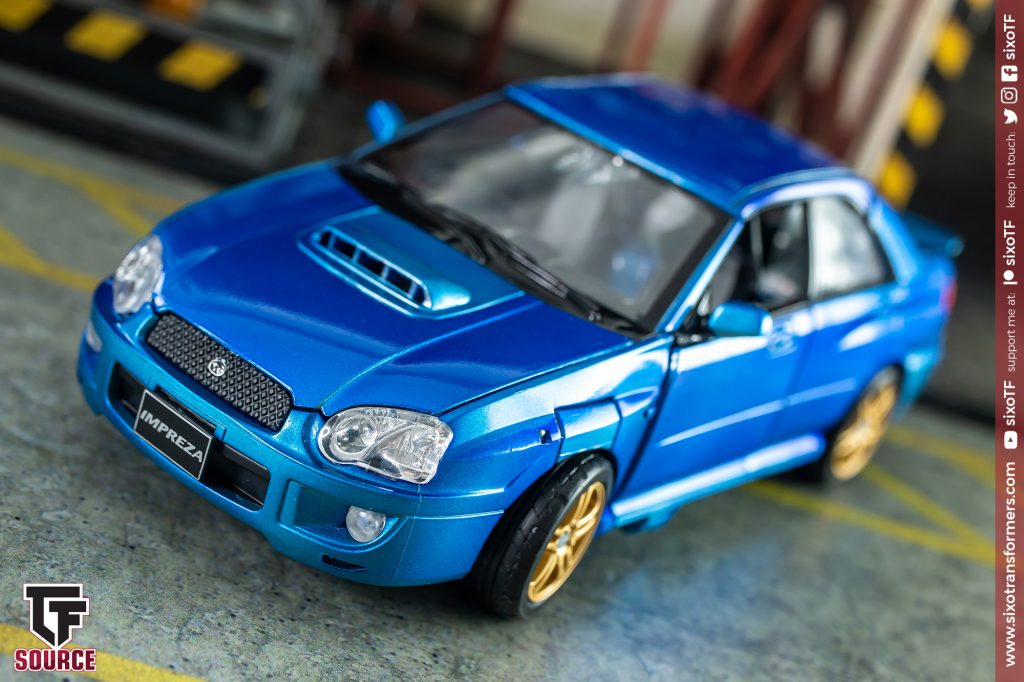 Despite often being overlooked, this landmark release still hails the first time the character’s colour scheme can be said to live up to his name and leaves the Impreza design looking really rather swish to boot (despite many copies exhibiting rather unfortunate paint fading over time). Blue Bluestreak was a thing, at long last! 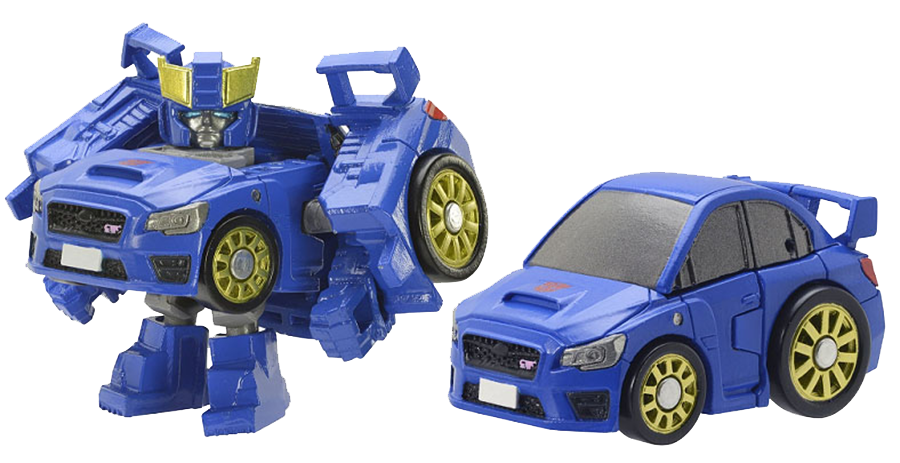 Since then, there’s been a smattering of other nods towards the paint job over the years, although most of these still fade into the background in one way or another. A 2015 Q-Transformers version of the character followed his Binaltech appearance by serving up a very squished Subaru, for starters. 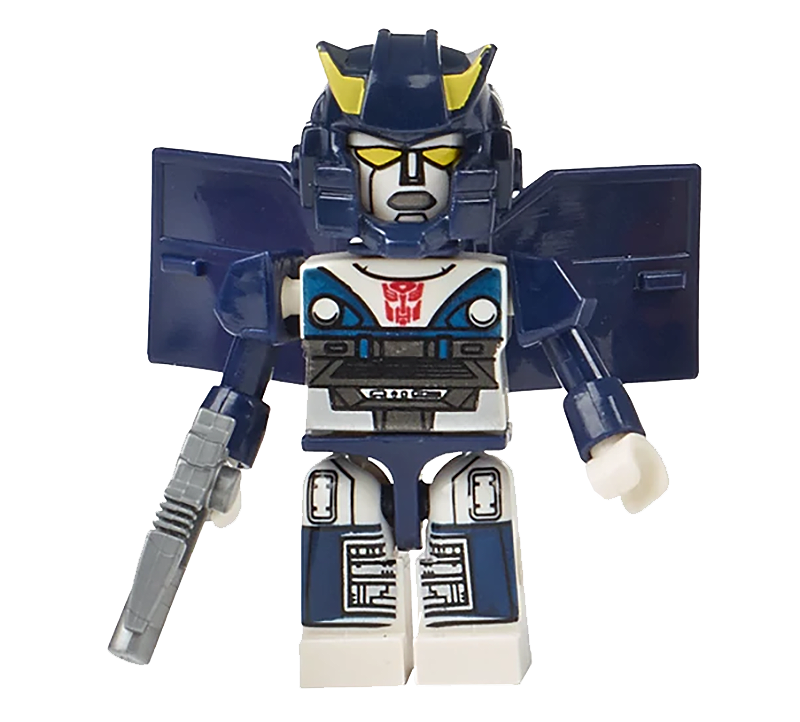 There have also been two separate Kre-O construction set figures representing the colour scheme along the way, both of which pay close homage to the vintage toy’s Diaclone appearance by including a number of obvious aesthetic nods in that direction.

More recently there has been a Transformers Figure Subscription Service repaint of Combiner Wars Smokescreen, all done up to yet again pay respects to that original pre-Transformers look. This remains the only nod towards a blue Bluestreak in the Generations arena, at present. 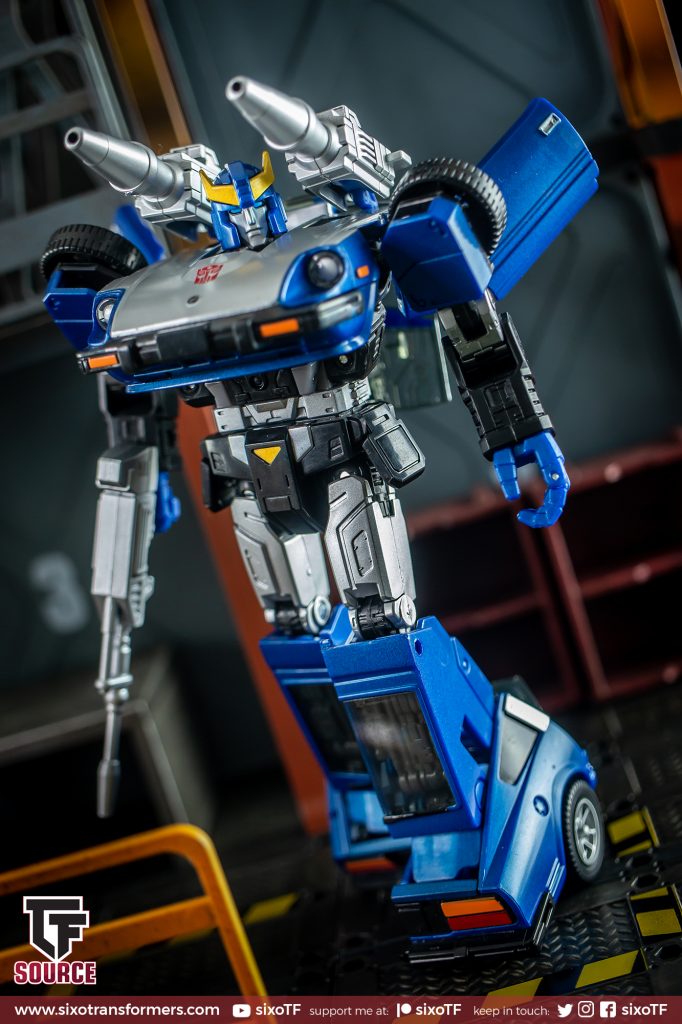 For many though, the ultimate love letter to the toy’s roots came in the form of Masterpiece MP-18B in 2015, as TakaraTomy finally realised the idea of the classic blue Bluestreak Diaclone look on a transformable figure. The attention to detail with this toy is terrific, as it even opted to make use of Masterpiece Prowl’s head sculpt as a way of ensuring the look was more in keeping with the vintage toy. It’s no surprise this figure remains a solid fan favourite, as at long last, many of us were able to own what we’d dreamt of for all those years – a blue Transformers Fairlady Z! And they say dreams don’t come true. 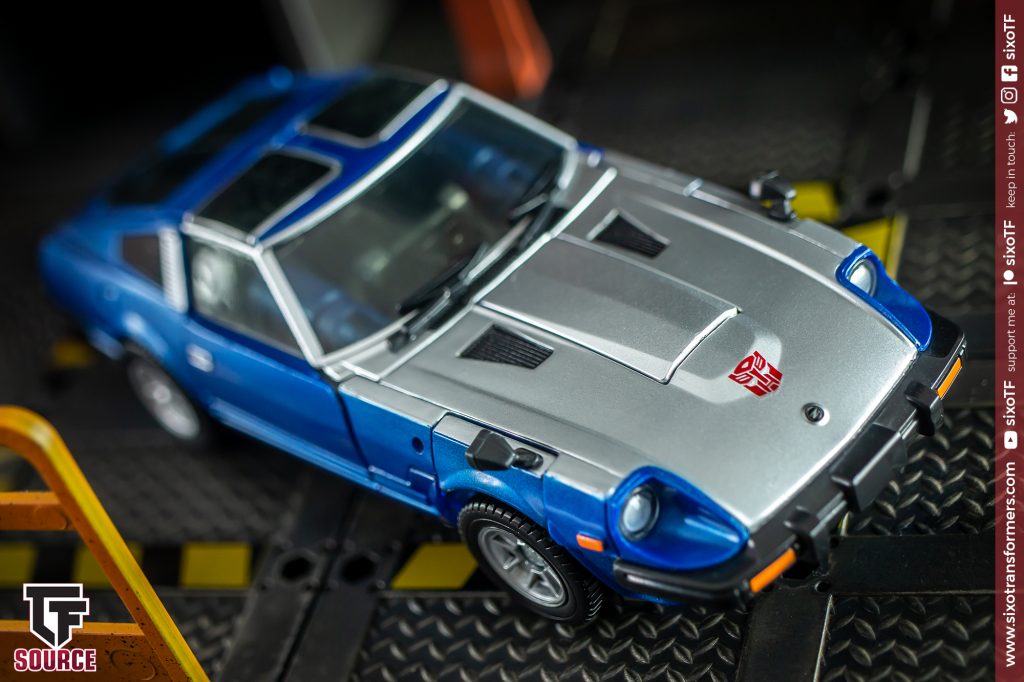 All of which leaves just one question remaining… will the idea of a Generations Selects version actually happen? I have no idea but it will be fun finding out.