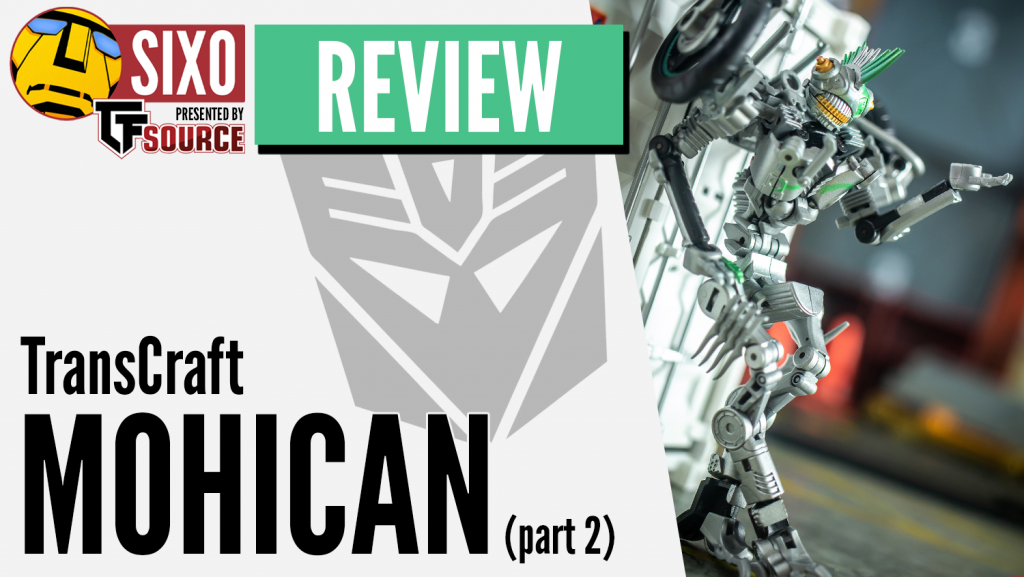 We recently took the tiny TransCraft Mohican for a spin in that rather sublime motorcycle mode and found it to be a pretty great representation of the real-world P-51 Combat Fighter. Now we’re back for part 2, so that can only mean one thing – it’s time for transformation! 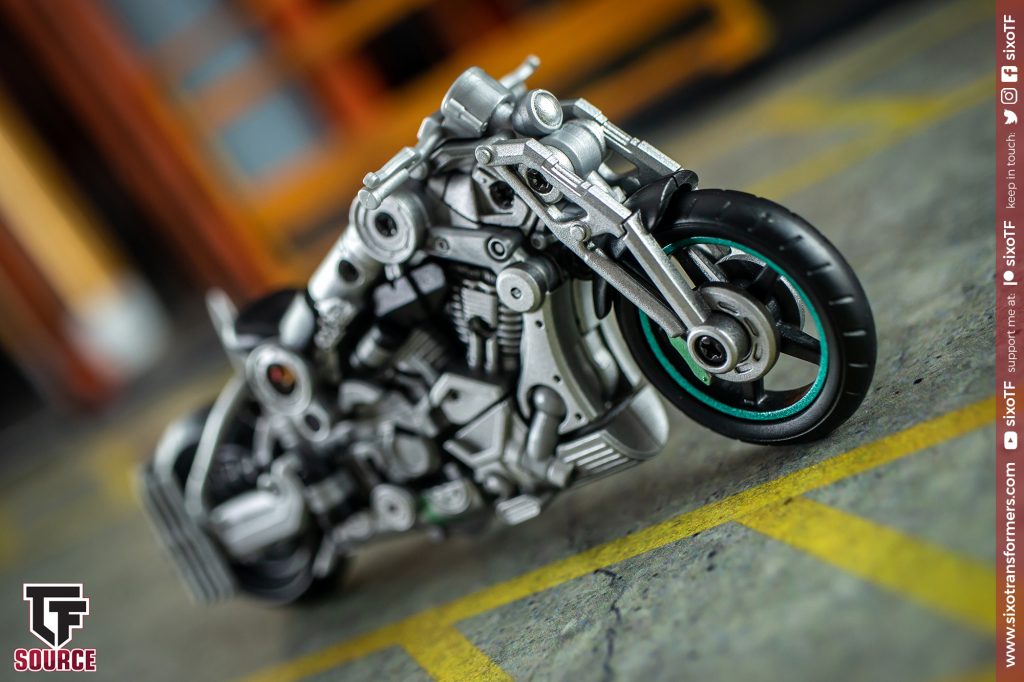 This toy’s on-screen counterpart, Mohawk from The Last Knight, transforms in all bit a blip and a flash, such is the advantage of expensive computer wizardry. However, even the twists & turns required for this plastic recreation won’t require too much of your time, as it’s very simple all told. There’s a wee bit of fiddly stuff to be done with getting the chest tabbed into place but otherwise, you’ll have him done in mere minutes with time to spare. 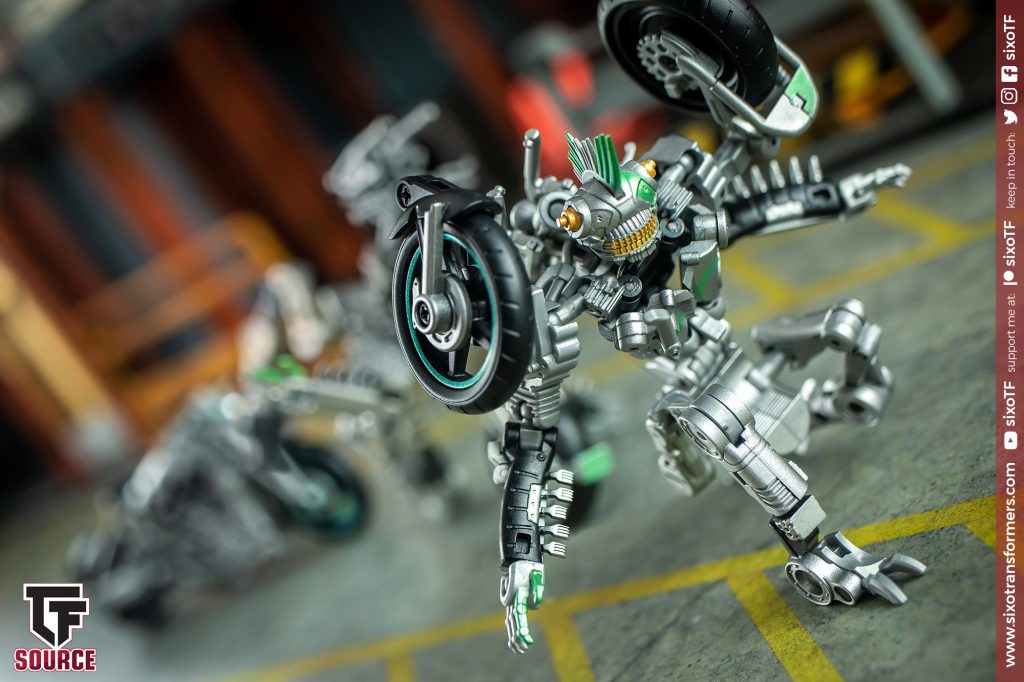 Possibly the only controversial element here at all is the inclusion of a spot of partsforming along the way, with the front wheel needing to be removed from the bike and then reattached at the robot mode’s shoulder joint to complete the look. It’s a shame this couldn’t have been worked out practically but it’s a minor point on an otherwise fun little formation. 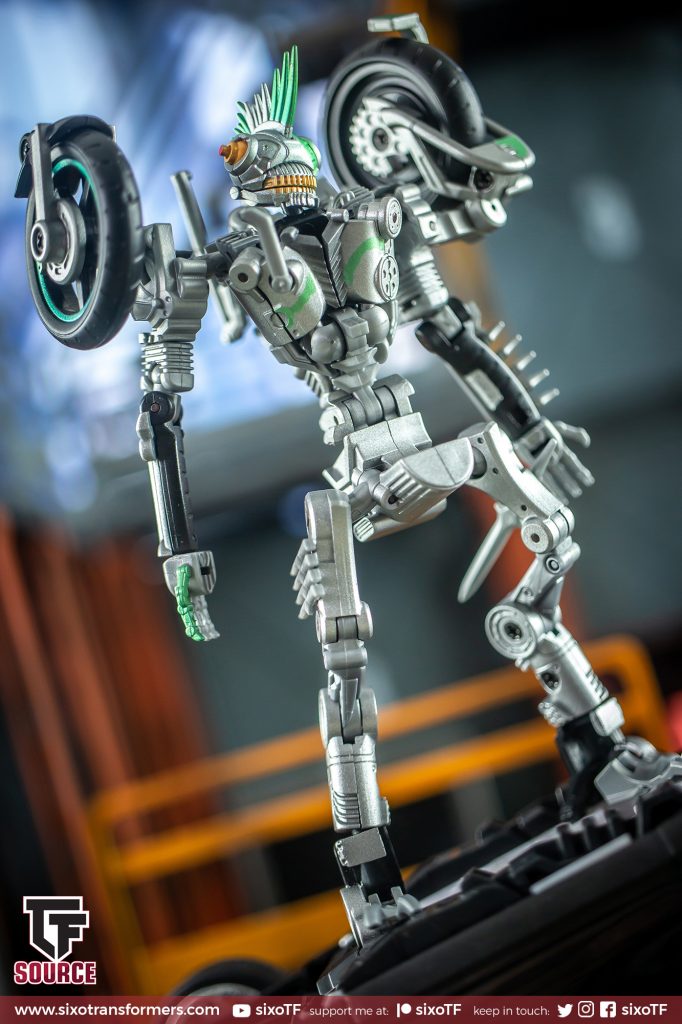 Once you’re done, Mohican (or Mohawk, if you prefer!) is left looking rather swish and surprisingly close to his appearance in fiction. Again, he’s barely standing still long enough during the actual film to get a good look, but do a straight-up comparison between this toy and the animation model and you’ll see what I’m talking about. 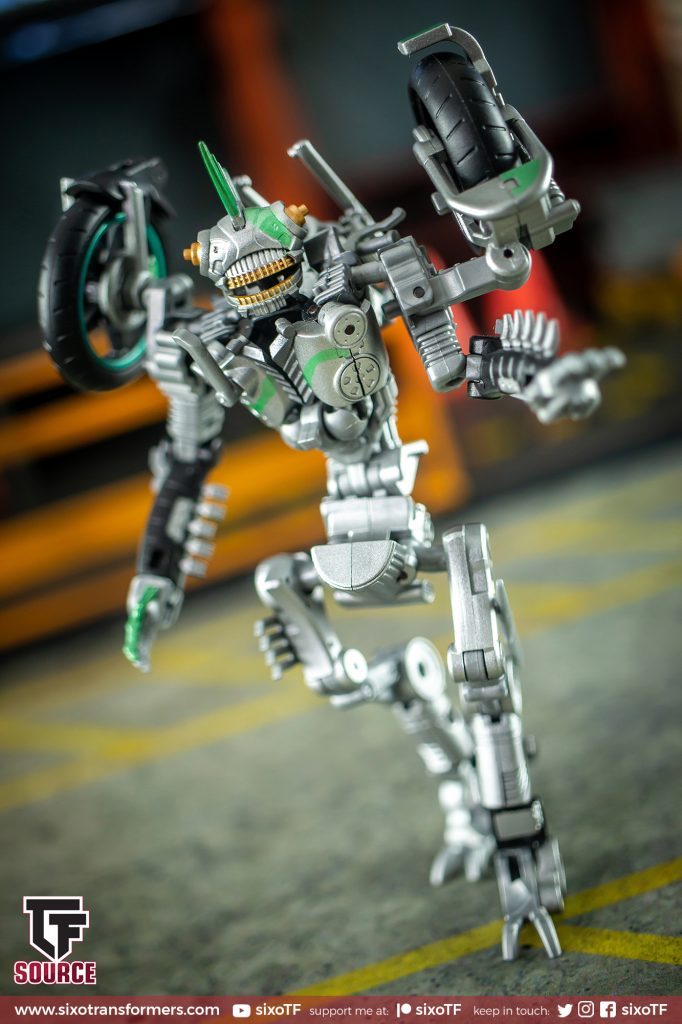 For starters, the chest area is remarkably on-point, with a lot of the engine detailing sitting in just the right place to be considered accurate. Even stuff like the vehicle mode kickstand ends up where it should! 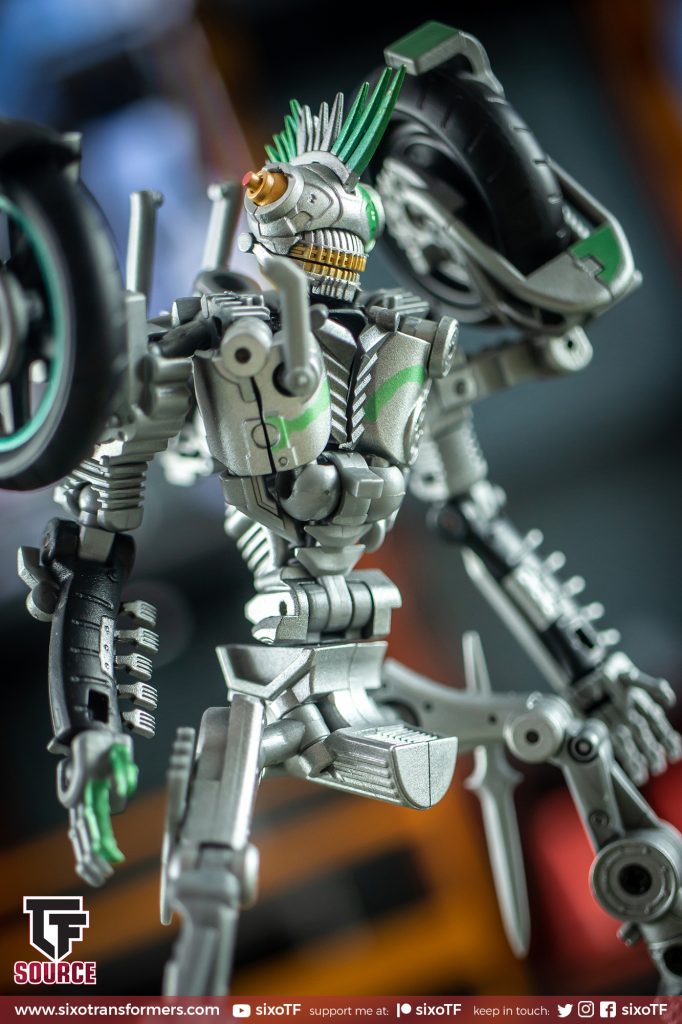 Then there are touches such as the spikes on his arms and other finer details, all of which end up where they should and help to ably recall the character to life. In fact, the more I went over this figure in detail, the more impressed I was with just how faithful a job Transcraft have done here – remarkable! 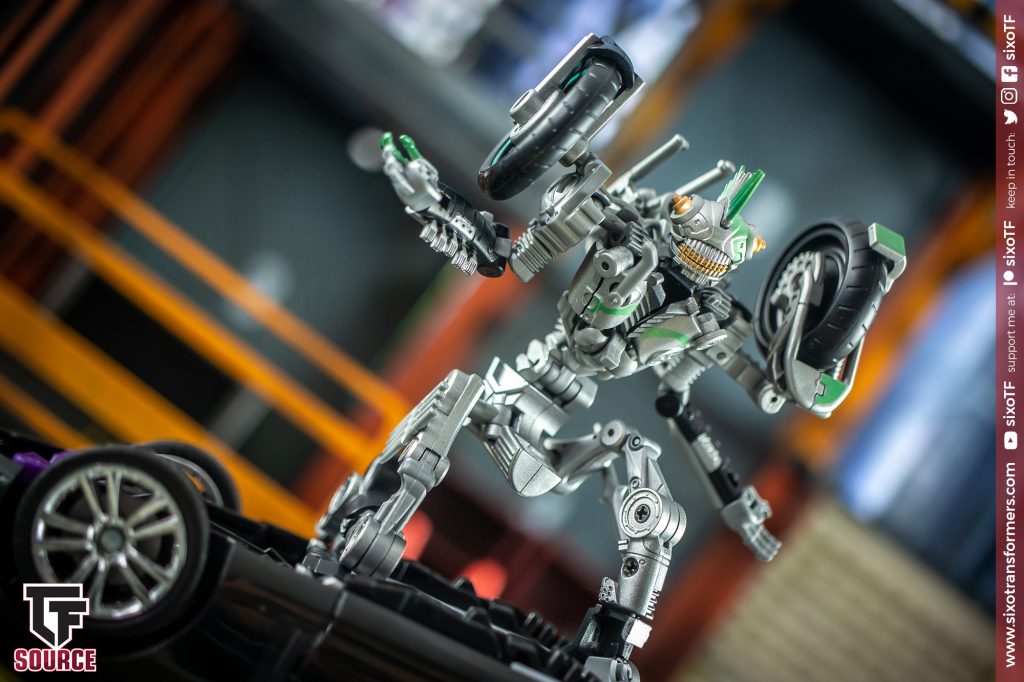 Where it also works well is in capturing the rather gangly awkwardness of the whole affair. Bayformers have been famed for their inhuman proportions and strangely-formed limbs, and Mohawk is of little exception. His lower body and legs are of particular note in this regard, but Transcraft have done a good job with translating them, I think. 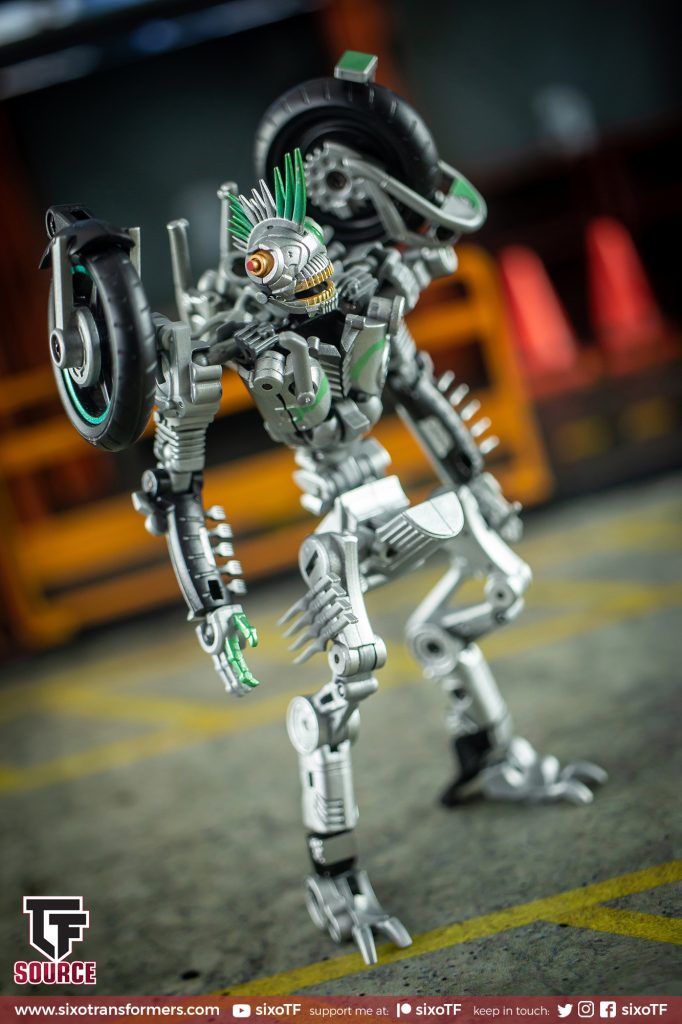 They’ve certainly got the ‘chicken legs’ aspect right, not to mention the weird pelvic thrust thing the character has going on. The arms and legs are a little more squared off here than they present on-screen but still, it’s hard to imagine coming much closer to how he’s supposed to look, in a lot of regards. 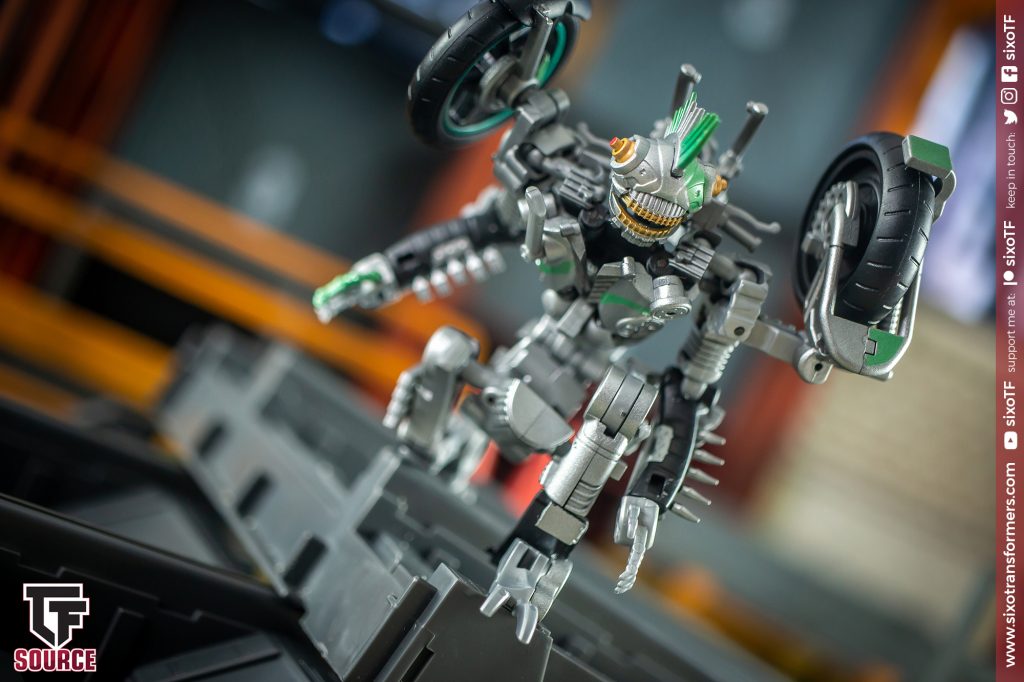 Some of that weirdness makes for a slightly awkward toy at times, mind, as it can be hard to know exactly how to pose the legs in particular, given their rather unruly nature. Still, with a bit of thought, he can do a convincing enough kneel, which is rather fun! 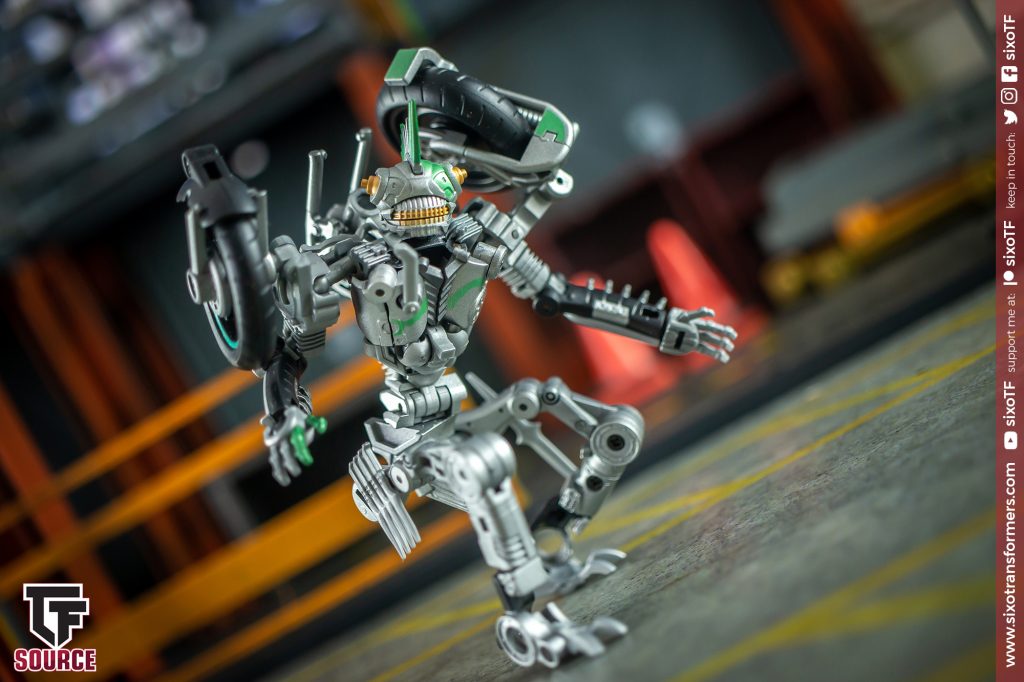 Then there are the arms, which present a bit of peculiarity in terms of how to pose them looking natural at the best of times, although I think that’s mostly on account of the hands if anything. Moulded open palms can be a bit of a killer when it comes to toys looking a little strange and so it is here, I’m afraid. 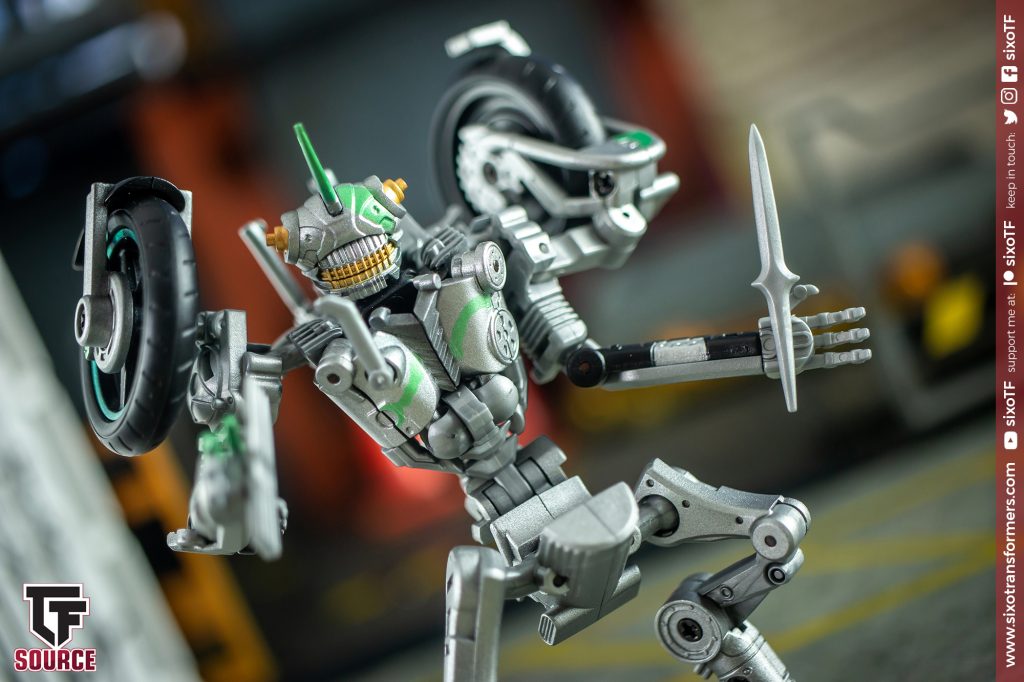 That’s especially true once you equip Mohican with either of his blade weapons, as they both tab rather unconvincingly into his open hands and never manage to pull off the effect of him actually holding them to any degree. 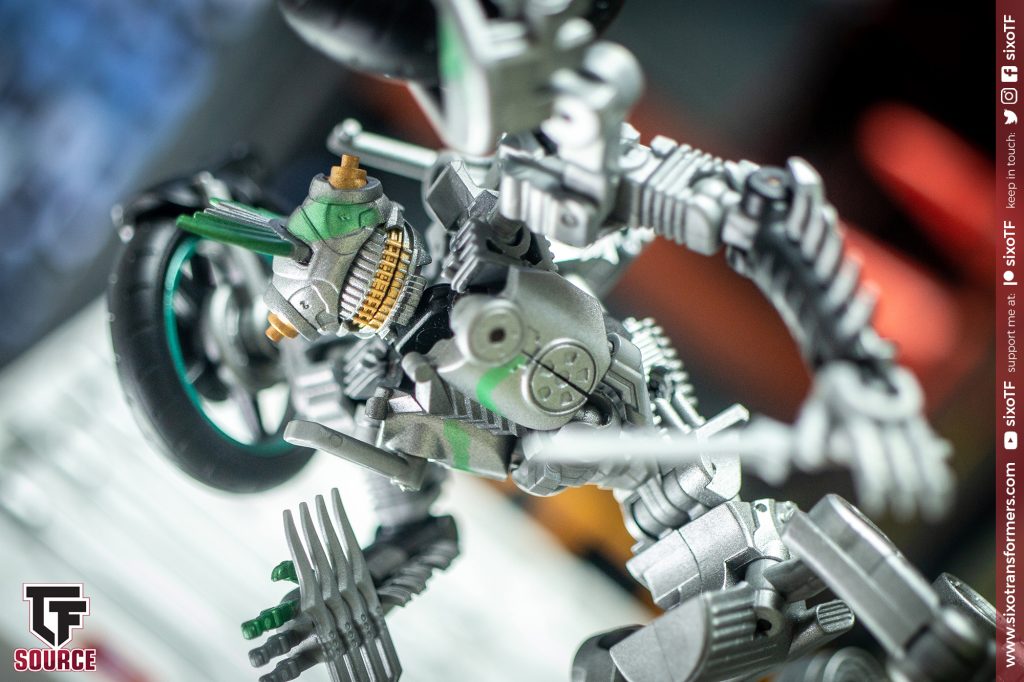 That’s not to say the weapons aren’t fun by themselves and I do like how they contribute to his signature punk rock look, but try getting him to hold them in a manner that looks deadly to any degree and I think you might be disappointed. 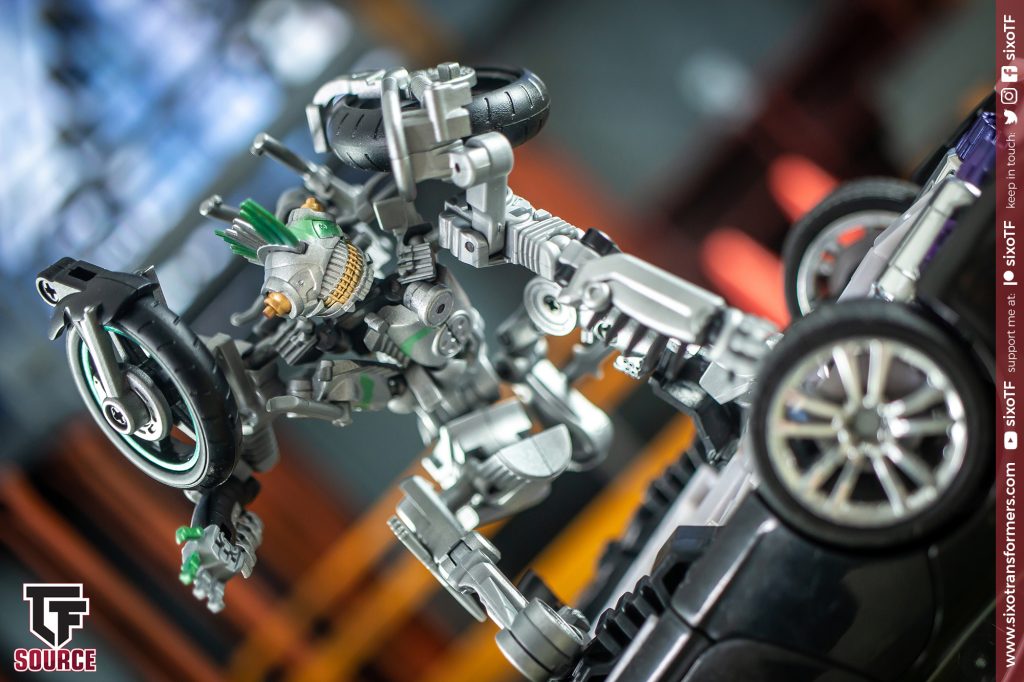 Fortunately, I think they look infinitely better when stowed away on the sides of his calves, and still manage to radiate an air of menace just by the suggestion they might end up in use. That leaves you with a few more creative options for how to best pose the hands, as well! 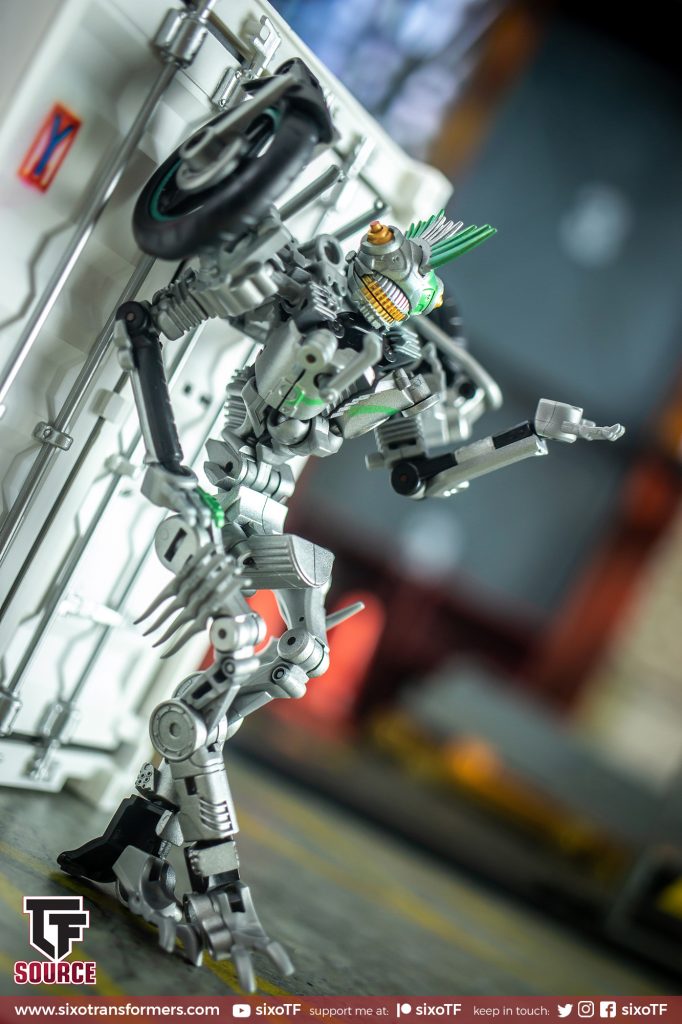 I have found that a palm-up situation works quite well, so anything including shrugging or a simple “what are you looking at?”-type pose goes down a treat. There’s no denying Mohican is full of personality, despite his quirks. 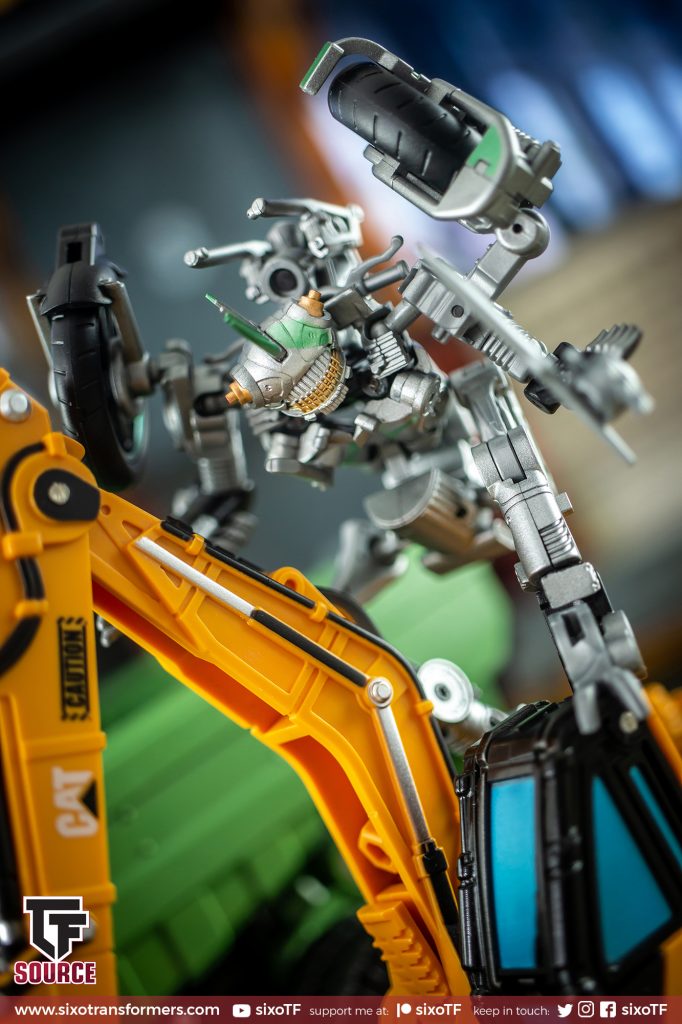 It’s that sense of devilish charm that carries this thing, in my opinion. I often find I enjoy toys that give a real feeling of the character they’re meant to represent, and Mohican does that in spades. 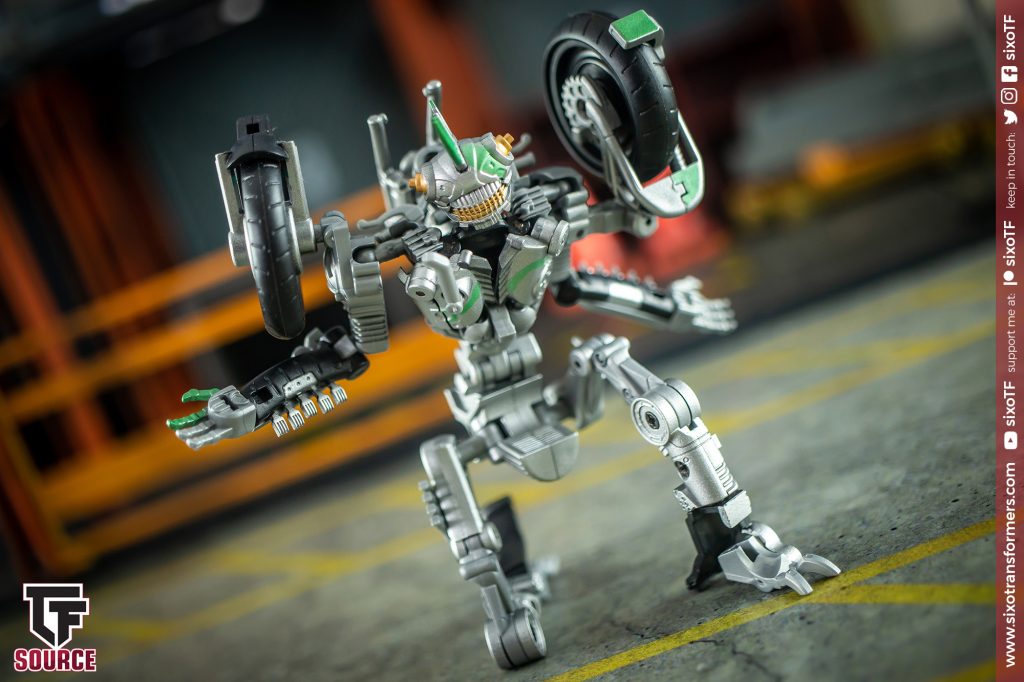 There’s just something about the design that means I hear his distinctive tones whenever I’m fiddling with it, as though TransCraft really captured the essence of what it’s all about somehow. 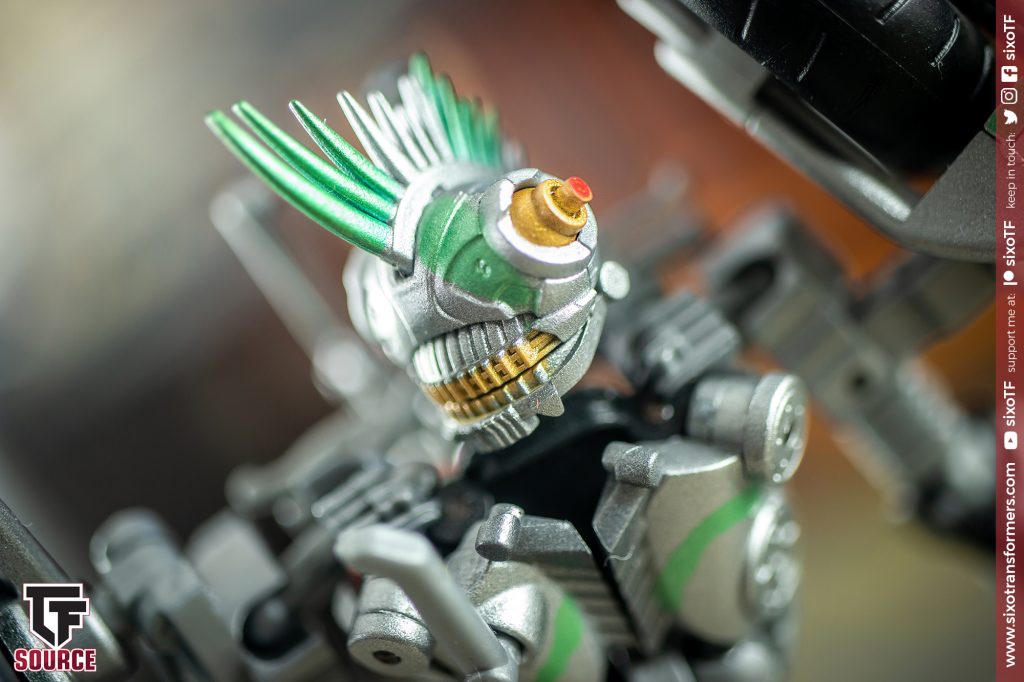 No doubt a sizeable dollop of that is the noggin on this fella. I mean, just have a gander, why don’t you? It’s a frankly bizarre affair all told, but one that strikes a note in terms of bringing the big-screen character to life. 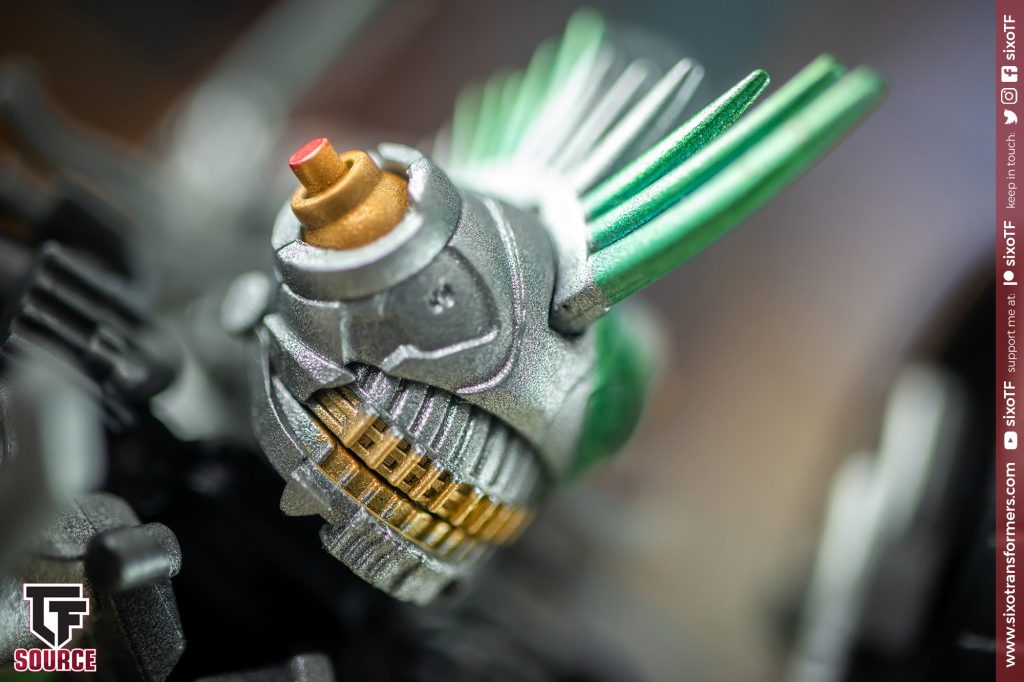 I love it all. The mohawk, the lizard-like eyes, the grill teeth, the paint applications, the moulding, the moving mouth… it’s perfection on a small scale. The hands may be weird but this face is everything. 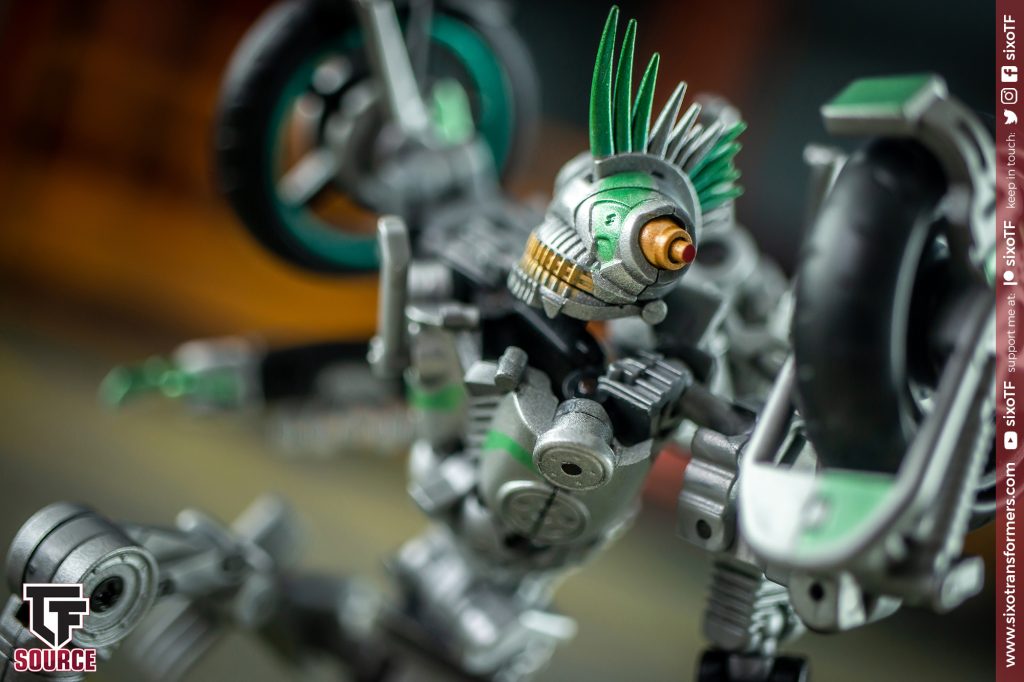 And when you’re talking toys that are this teeny, that kind of attention to detail counts for a lot. I’m willing to forgive a few details here and there, but them doing the head such justice is making Mohican work for me overall. 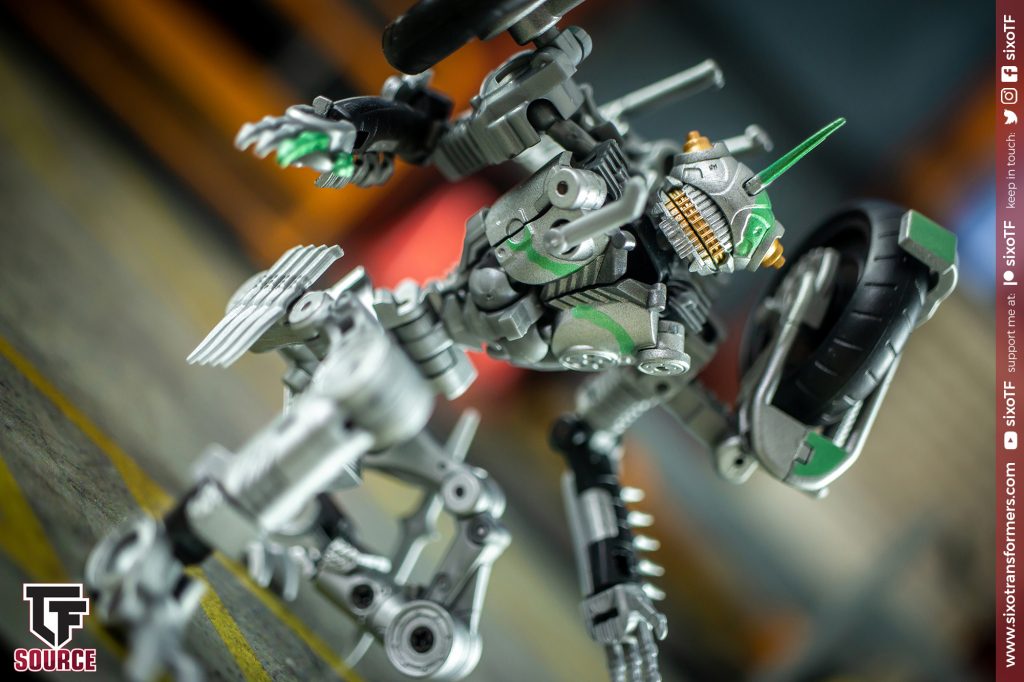 Also of note is that the toy feels relatively good quality, too, with the plastic and joints all up to snuff for the most part. The only real exception to that is the ankles, as they do have a bit of a habit of giving way somewhat and coupled with the claw-like feet that can mean he’s a trifle hard to balance stably. 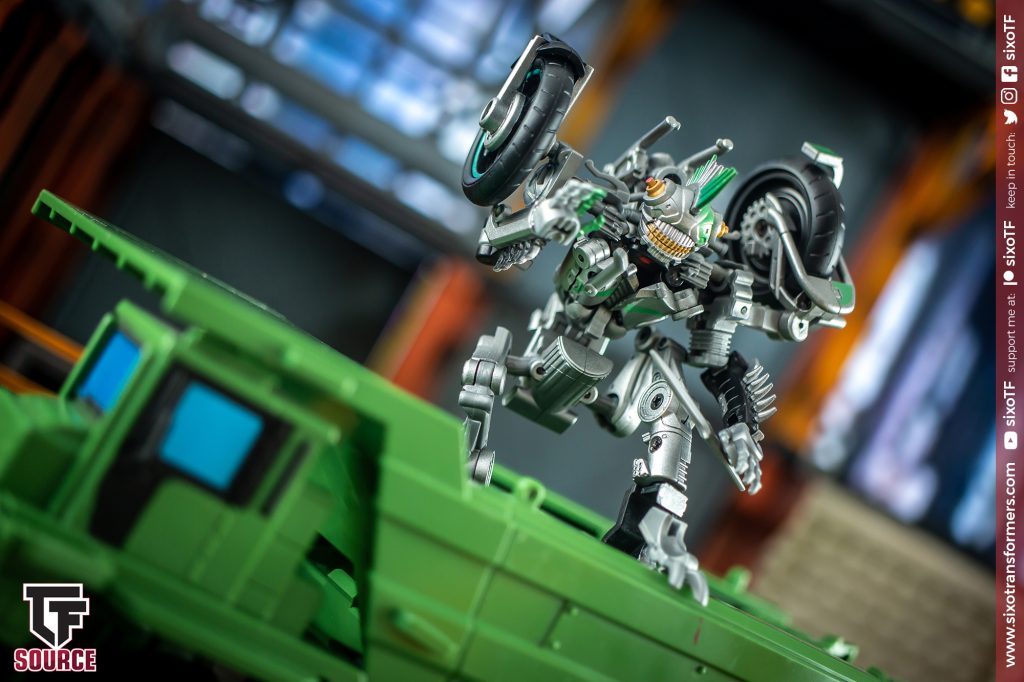 Still, once you get him into a pose, there’s little denying the sheer, unbridled cheeky charm he’s got going on, making Mohican a ton of fun overall! 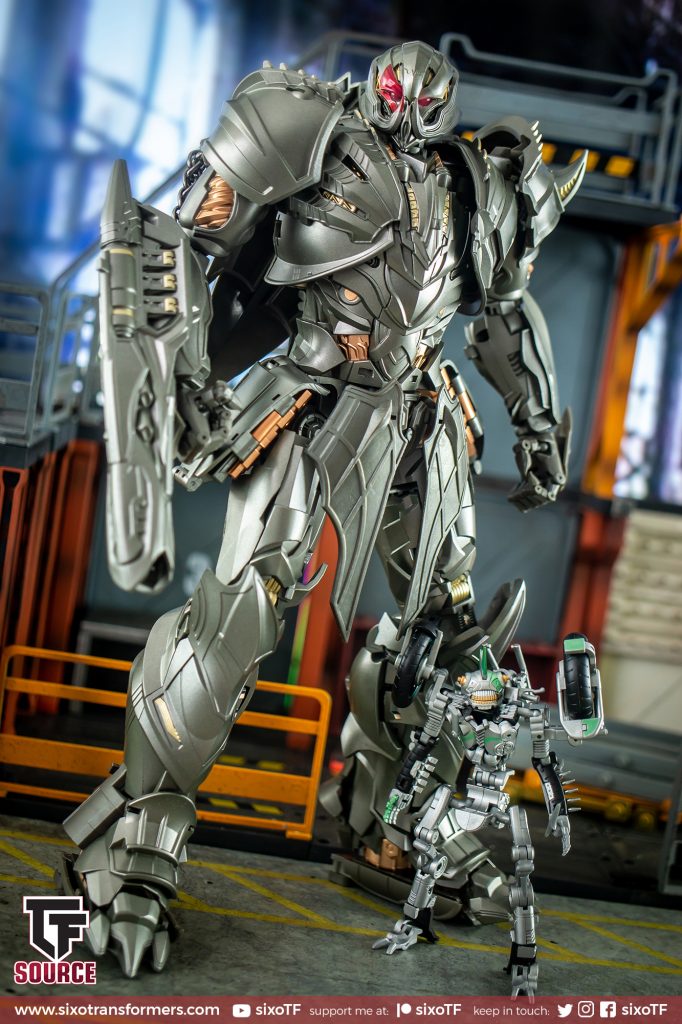 I also live his absolutely minuscule stature! One thing I always appreciate about Transformers is the relative heights they have going on and I don’t think there can be many examples quite as potent as standing this lad next to the likes of Unique Toys Dragoon. It makes that beast look even more massive than in fact he is! 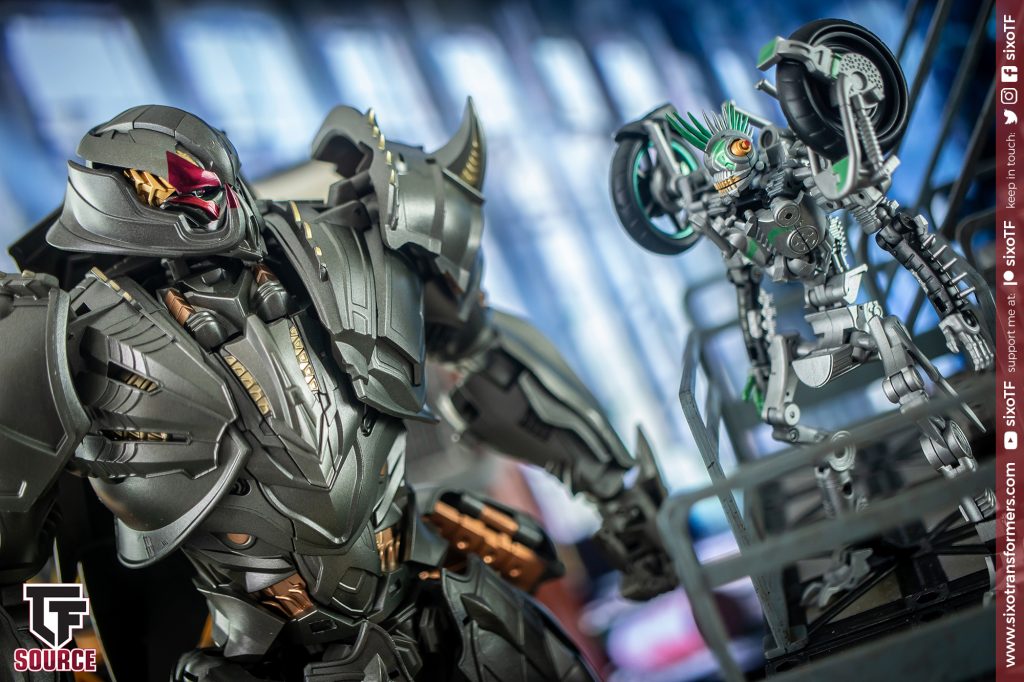 These two may be the only real 3PMP representation for Megatron’s TLK crew that we have so far, but boy, they are doing that line-up proud thus far. 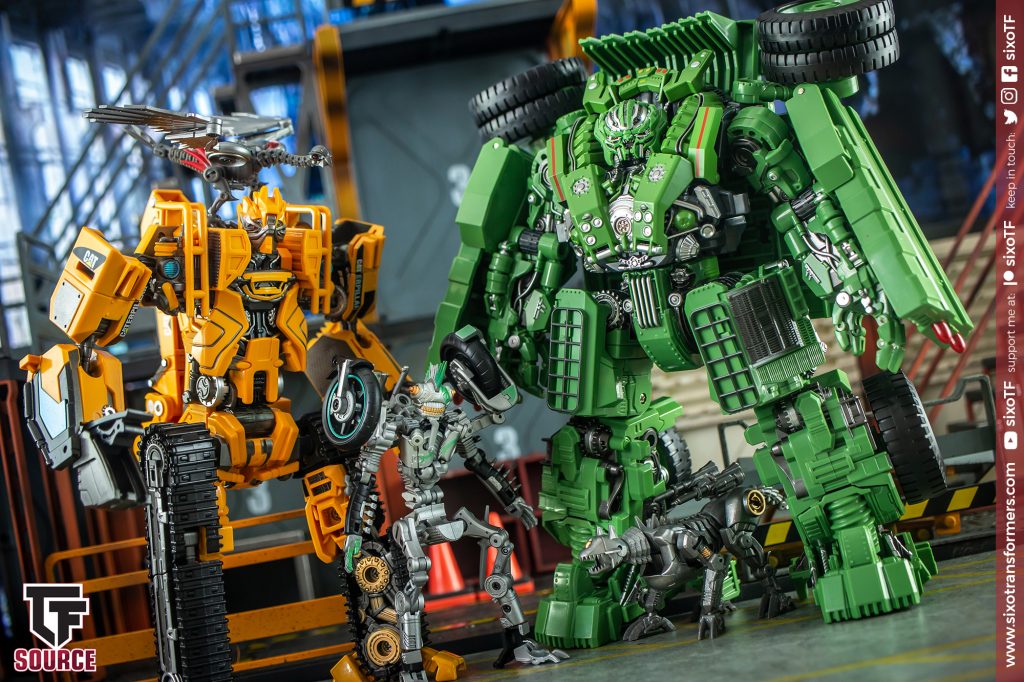 Not that it isn’t fun to mix it up a little bit and imagine Mohawk mingling with any number of Decepticons from the other films, mind. I often lament that so many of these characters were offed from one adventure to the next, and it’s great to see them lining up in toy form at least. 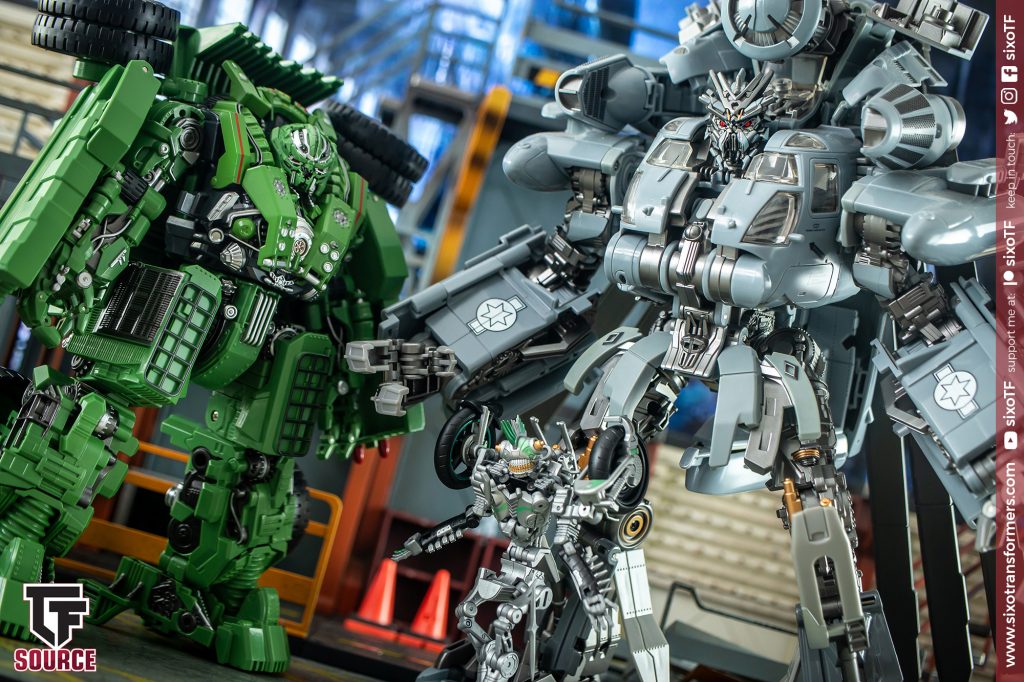 In fact, we’re remarkably well-served in the third party Bayformer stakes these days, but even then I think Transcraft have achieved something a little different with Mohican. 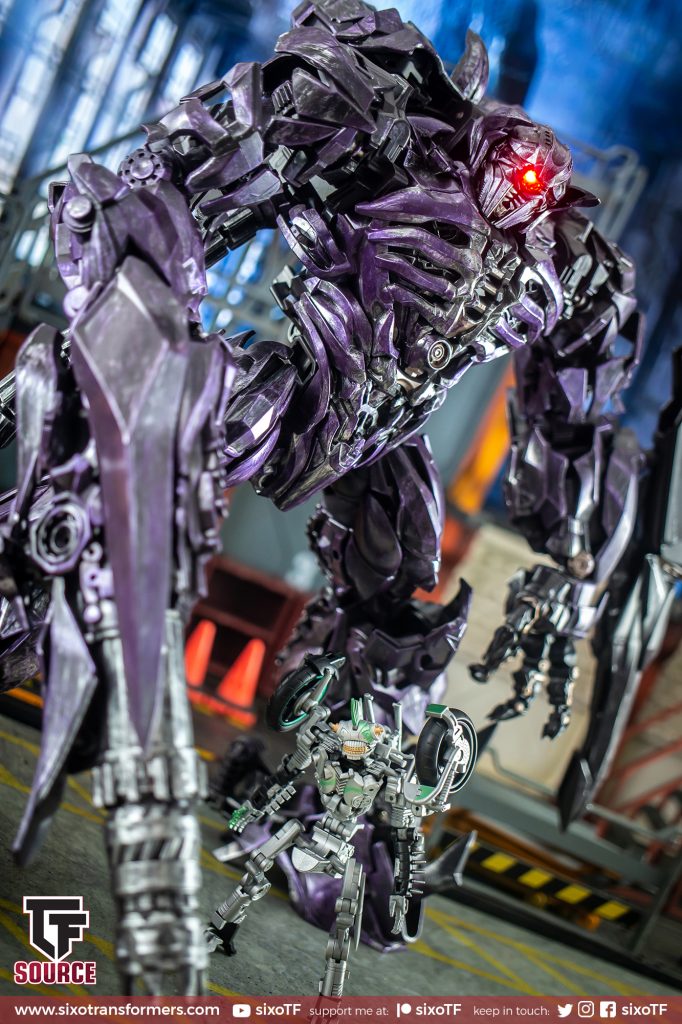 Above all else, they’ve captured my interest with this release, leaving me very interested to see more of what they’ll be doing in the future. 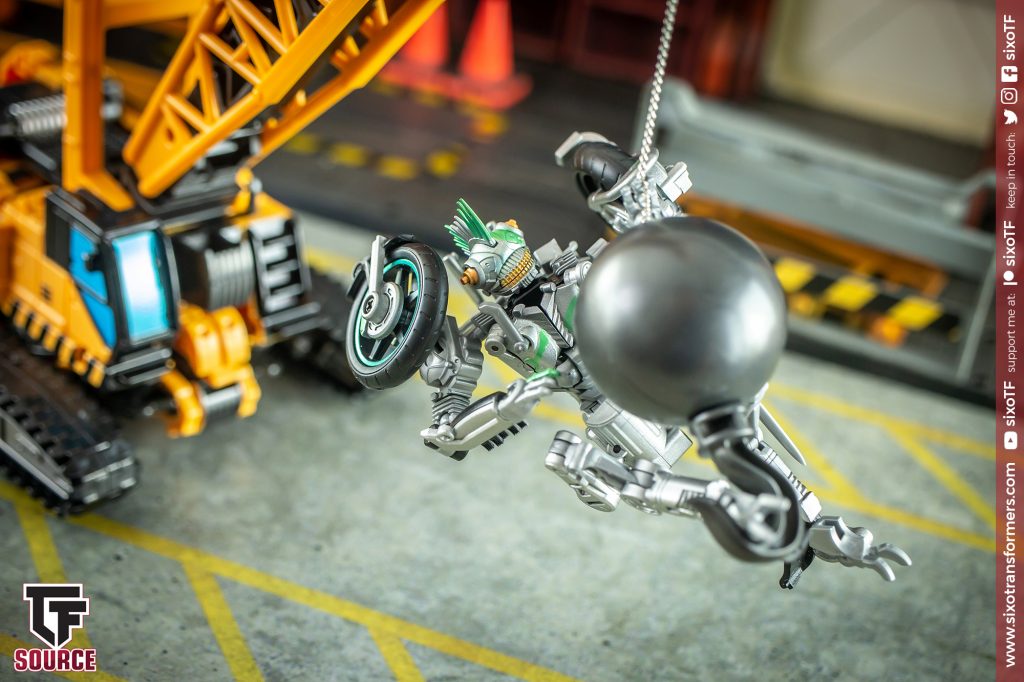 He may be ever so tiny but he still packs a considerable whallop.

WHAT’S NOT? The ankles aren’t the most stable and the chest is a bit fiddly and hard to tab in. The hands are weirdly open-palmed too.