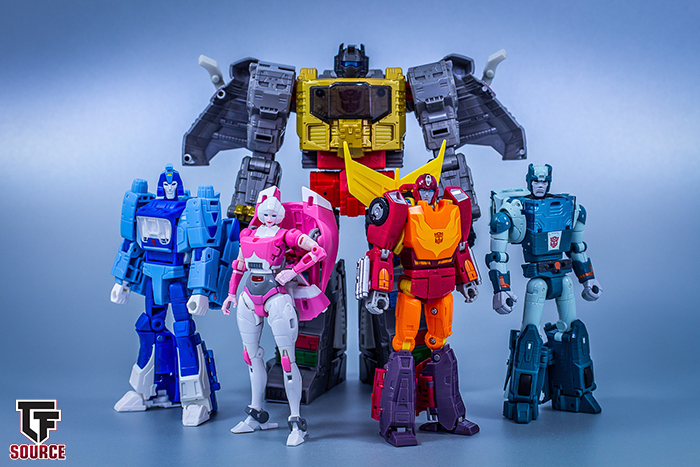 The popular Studio Series arm of the Transformers Generations-scale toy line recently expanded to include characters and toys inspired by the original 1986 Transformers: The Movie animated feature, dubbed Studio Series 86. While not a popular decision among all collectors of Studio Series toys – some would have preferred it to stay purely focused on live-action movie toys – it succeeded in drawing the likes of myself in for a first taste of Studio Series action. I’d not collected Generations class figures since Hasbro’s Titans Return, so I was definitely feeling the lack of fiddleformer style toys in my collection after an extended period of vintage-only buying. Here’s the story of my brief dip into the world of the Studio Series 86 and Generations TF:TM movie cast. 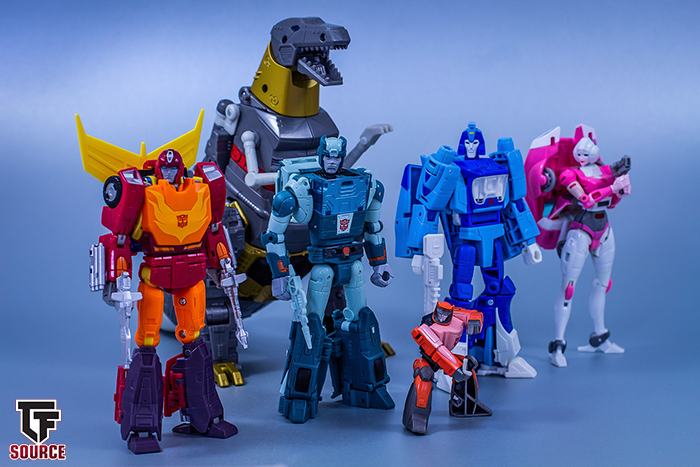 The line-up for Studio Series 86 confused me a bit, as by the time I had taken notice, there was a new deluxe Arcee toy in Transformers Earthrise, and a new voyager Cyclonus toy in Transformers Kingdom, but Hot Rod, Kup, Blurr, Scourge, Jazz and Grimlock were in the SS86 category. I guess my only complaint here would have been that the packaging and paperwork/accessories would not have been consistent across those toys, so the delightful TFTM-specific toy stands with backdrops from recognisable scenes would be limited to the SS86 guys. Then again, I pondered displaying them for a week on those stands before they proceeded on their way to cardboard oblivion. 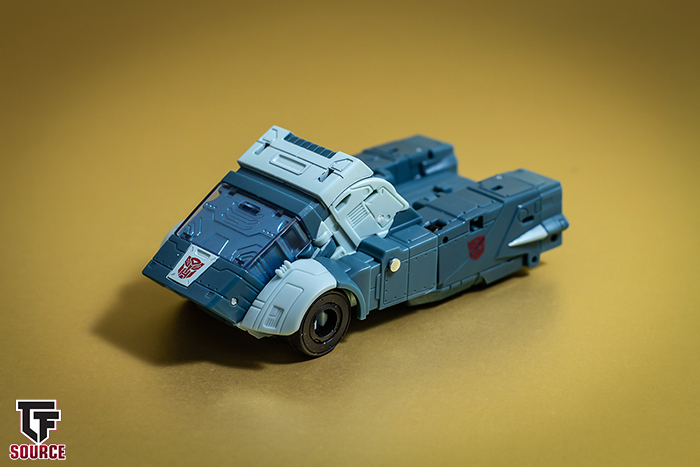 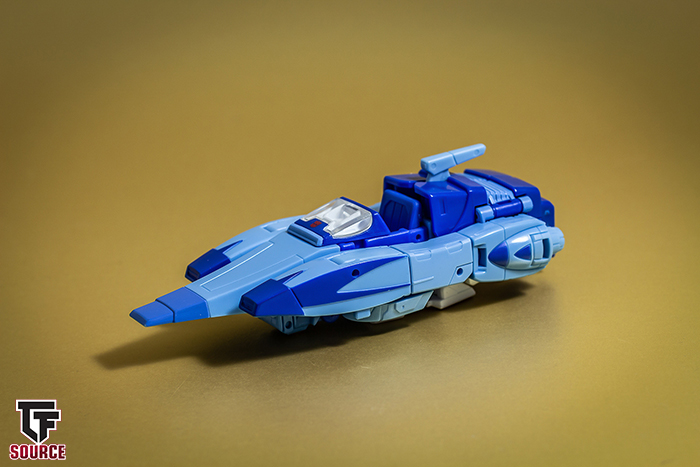 First impressions were really good, especially as I’d opened Kup before the others. There was lovely paint application, a fun accessory in the Energon goodie dispenser, and a great range of articulation on the old timer. Transforming him was an interesting experience, and I stuck to the instructions. Some of the panels felt flexible and I was surprised by the force required to clip the legs into the front wheel arches. I found that a recurring theme with these newer figures (to me) was that the more I transformed them, the better the tolerances and fits became in both modes. First time through, neither Kup nor Blurr sat right in vehicle mode, but I was grateful to see it improve with every conversion. 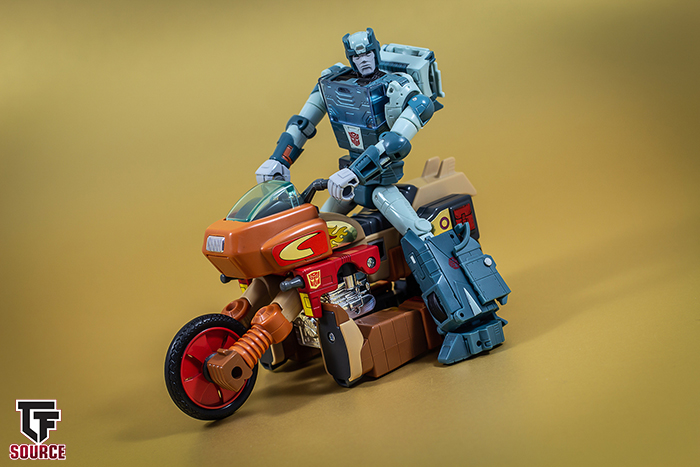 This sort of figure, quick-converting and easy-to-pose, was perfect for this new era of working long periods from home where numerous lengthy Teams or Zoom calls had to be endured! I don’t think anyone ever caught sight of me transforming my SS86 figures just off-camera, but the five cabinets of Transformers toys immediately behind me did not go unnoticed on webcam at my company! Another aspect that really attracted me to the SS86 figures was just how good their alternate modes looked when compared to the TFTM animation models. Kup was a great step up aesthetically from the Titans Return toy, but even its fun transformation can’t match the TR version. Blurr came in for some understandable criticism for its large sleeves that were not well-hidden in robot mode. Personally, I had no issue with either Kup or Blurr’s headsculpts, they worked just fine for me in person. I could easily have lived without Blurr’s can accessory, though, however well it could be stashed away inside his legs. 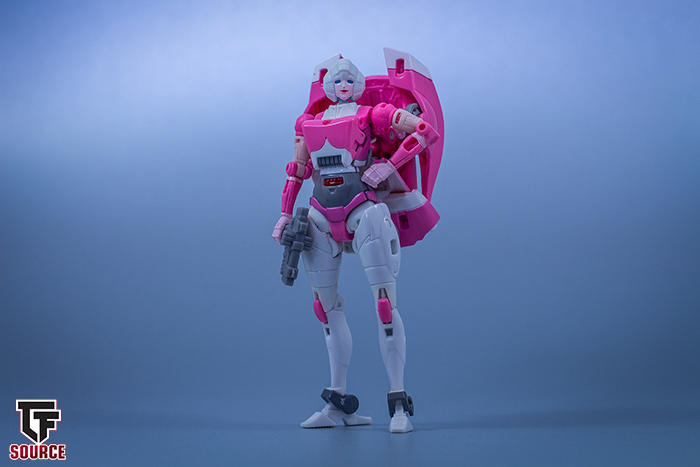 Now, seeing as how I couldn’t get on board with Earthrise Arcee, I sought out the Takara Tomy Legends Arcee (Japanese release of the Generations Arcee from years earlier), and was hugely happy with how well she slotted in next to the SS86 guys. The colours on that LG Arcee still sing today, and only the bizarre hand moulding that ensures she never really holds her guns convincingly grates. The fact that she sports some paint application really helps her integration into the Studio Series 86 group. I do wish she was a bit more stable on her feet, though, as my copy is most susceptible to toppling, and with that much paint, chips are inevitable.

You’ll also notice a picture of the War For Cybertron Allicon up there, too. An essential part of any movie collection, I couldn’t help tracking one down. Another excellent deskbot and movie cast member realised in modern form, I found him irresistible. I never did get around to picking up any Quintesson judges, but as for the Allicon, a very simple and effective design that does absolutely all you’d want him to at this scale, and with this crowd. Well, if you can get over the beast arms that hang around in robot mode like a dinner guest who’s overstayed their welcome. 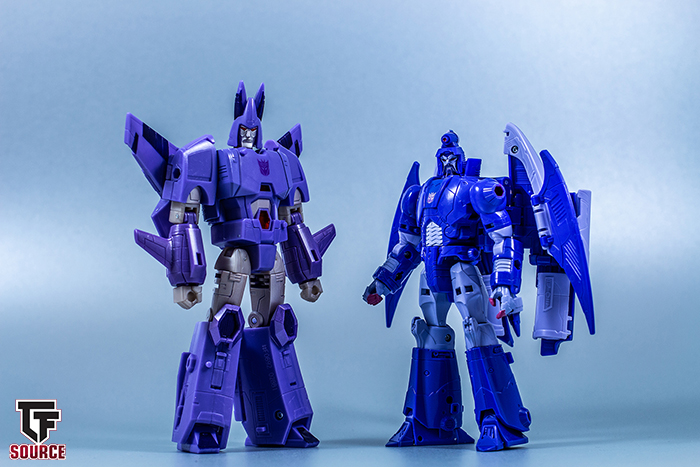 How about some Decepticons, then? Well, it was the pre-release images of voyager-class Studio Series 86 Scourge that got my attention last year, initially. I couldn’t believe just how wonderfully a Generations-class figure had captured his movie likeness and silhouette – pink nails, wings, facial hair and all. In-hand, Scourge had a few minor paint defects, but his looks totally blew me away. He suffers a little in terms of posability as his thighs do not rotate out too far to give him a more natural standing position. You can push it, but they may pop out of their sockets a little at the hip. He has one hand moulded to look open, which can aid a double-handed gun-holding pose. The transformation on Scourge is great, highly repeatable and predictably panel-driven for the wings. That said, I love how the conversion of the head assembly was designed, and it has an alternate spaceship/soap bar mode that I can totally get behind. This is a superb movie Scourge, no question. Killer headsculpt, too.

Cyclonus. Kingdom Cyclonus. Will there ever be a more perfect representation of everything this giant of a character brings to Transformers? I’ll admit I am biased as far as the character goes, but this is one absolutely resounding victory of a toy. It has a transformation that is so clever, yet so intuitive, that everyone who experiences it will be left changed. I watched a work colleague (also a collector) figure it out right in front of me, and the joy he experienced was a marvel to behold. Proportions in robot more are delectable, and that jet mode is the best I have seen on a Cyclonus toy since the vintage era. The fact that they even went so far as to allow you to fold a part of the wings up to create the perfect movie silhouette is impressive, and coupled with the jet mode spike and double fold of the wings behind the shoulders – and blazing light piping – this is a contender for toy of the year. A bit more bend in the elbows would have been great, and stress marks when connecting the legs to the torso in jet mode were downsides, but for a toy that did not end up under the SS86 banner, he sure qualifies as a figure that embodies everything that line sets out to accomplish. Killer headsculpt, too. 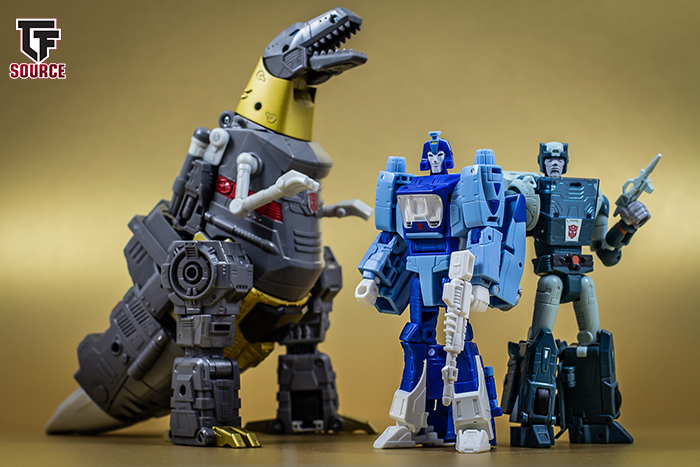 I initially regretted buying the Studio Series 86 leader-class Grimlock, because I felt I was once again slipping into subline completism, versus just picking up stuff I felt drawn to on its own merits. It’s why I skipped Jazz, I didn’t want the 84/85 cast again, I wanted the breakout movie cast. Having said that, Grimlock was a joy. Once I got over his nebulous cream-coloured dino arms that just always seemed to be in the way and visually jarring compared to the rest of him, I found a marvellous toy underneath. Great proportions in both modes, supremely fun and intuitive transformation, and a robot mode that begs you to play and pose. Another real hit for the SS86 line, in my opinion. I quite enjoyed how much he towered over the deluxes, too!

Yes, there was also the accompanying Wheelie figurine that was permafrozen in his sitting pose – which is exactly what he was designed to do, sit on Grimlock and shoot from his catapult. I tried, but just couldn’t get excited about it, overall. I would be surprised if they didn’t just release a transforming Wheelie in this line or the accompanying Kingdom line eventually, after all we are getting a Sweep (don’t get me started), a Wreck Gar and a Perceptor soon! The upcoming 3rd party ‘throne’ being designed for this Wheelie figure was revealed just a little too late for me to find a reason to keep him! 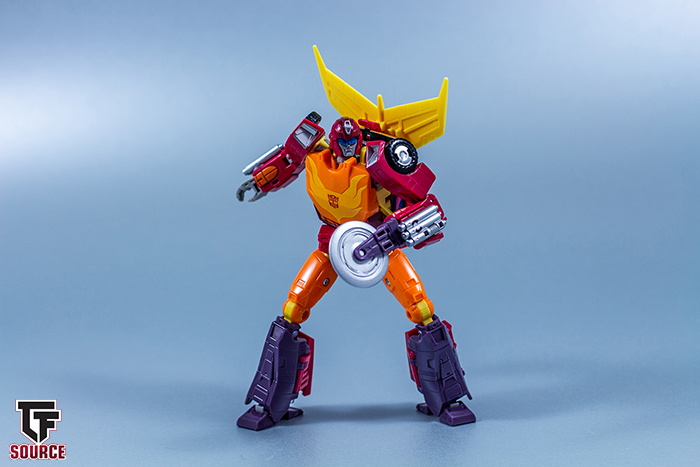 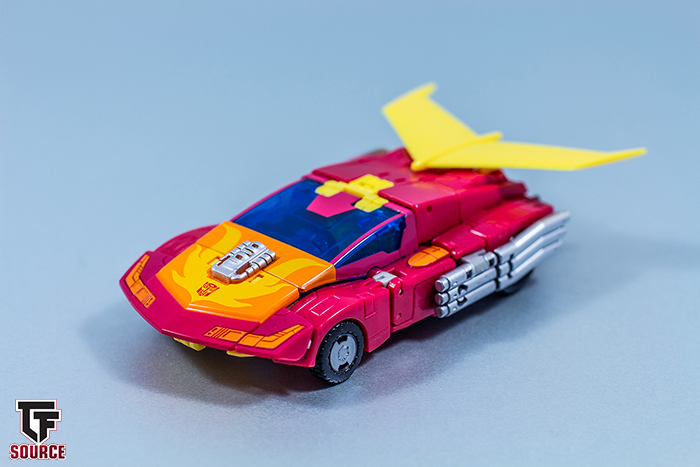 I’ve saved the best till last. Studio Series 86 Hot Rod is a revelation. Cyclonus takes some topping, but Hot Rod manages it. It is absolutely no exaggeration to label this toy as a Masterpiece at Generations level. Sure, it’s deluxe class at voyager price, but he comes with a stack of accessories that puts some MP releases to shame. The level of complexity compared to his fellow deluxe class SS86/WFC toys is also mightily impressive. He’s filled with wow moments, especially the rotation of the chest/arm assembly which evokes major Quintessa vibes. Articulation is tremendous, proportions are exceptional, transformation is out-of-this-world good for a toy of this price and scale – of ANY price and scale. He is stunning to look at and stunning to handle.

His headsculpt is glorious and so so spot-on, plus the dreamy blue visor gives you a genuine display dilemma of the best kind. He is another of those that required a few transformations for things to start fitting and clipping correctly, but he definitely struggles with all of the alignment sometimes, no matter how often you handle it. There are also areas where the paint will inevitably rub off, such as his face on repeated visor use. Some have expressed disappointment about the obvious yellow plastic section on his roof that should have been coloured similarly to the rest of his chassis, but to me this was a non-issue. There was just far too much excellence going on. There are so many elegant solutions employed everywhere on this toy during transformation and attachment of accessories to his wrists that I was disappointed in for MP-28 Masterpiece Hot Rodimus. 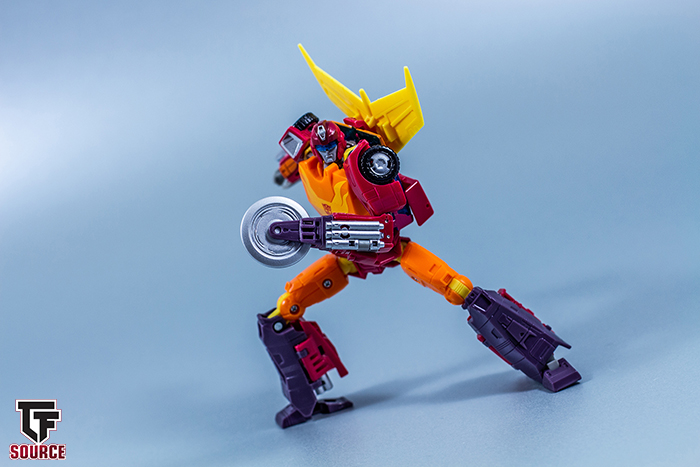 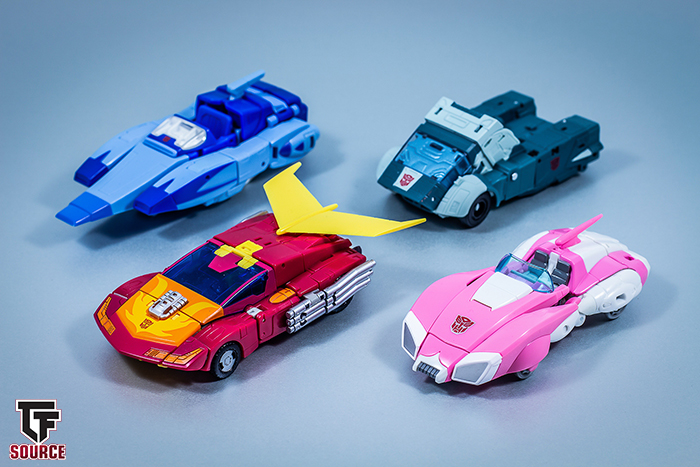 So, while Hot Rod stands out from virtually anything Generations-class that I have ever handled, credit should be given to all the figures I have featured here for allowing the assembly of such an attractive and relatively accurate TF:TM breakout cast. We are in line for a “variant” SS86 Hot Rod at some point soon, and we can but pray that we finally get a proper pink/fuchsia/magenta screen-accurate depiction of this guy, decades after his movie appearance and the original pink G1 Hot Rod toy prototypes.

As hinted at the start of this article, this has been a brief adventure and experience for me. I soon started down other paths of collecting again and decided I didn’t need to own these toys indefinitely, but Hot Rod has stayed. That decision was in some part influenced by the reveals of Kingdom Rodimus Prime and Galvatron, who clearly excited and thrilled a large part of the fandom, while absolutely not being what I was looking for at this scale – for this specific cast collection – having enjoyed the strong movie aesthetic and relative accuracy of Hot Rod, Scourge, Kup and company. The vehicle mode matters to me as much as the robot, and for a while there I was quite enchanted with what Studio Series 86 and the associated Kingdom/WFC toys were aiming for and achieving. Wreck Gar and the upcoming Sharkticon certainly look to be in the same vein!

Whichever figures I end up keeping from this adventure in the long term, I can tell you it’s been enormously enjoyable and I have nothing but great experiences and memories of these figures. I cannot recommend them heartily enough. Now give us a pink Hot Rod! 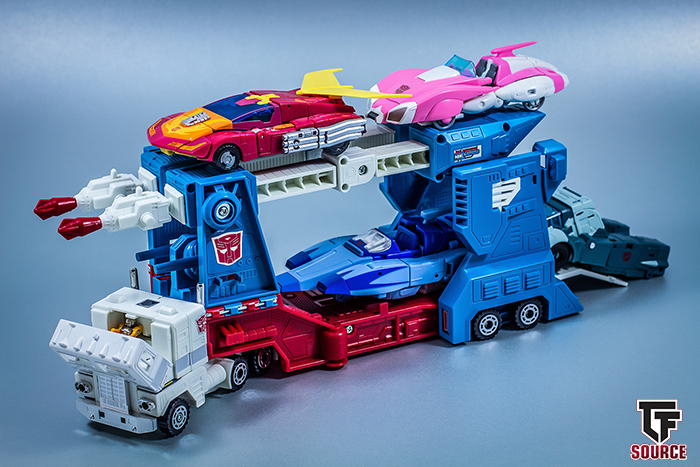