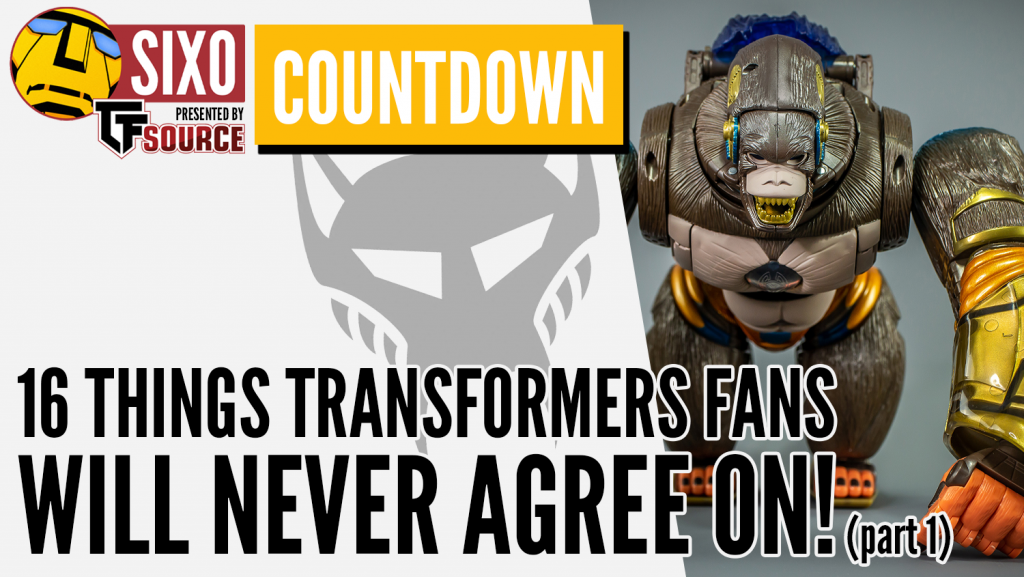 If there’s one certainty in life, it’s that Transformers fans are always going to disagree on some parts of the franchise.

There are some aspects that we can all generally find common ground on. For example, pretty much every Transformers fan can acknowledge that ‘car becomes robot is good’ or ‘mechanical dinosaurs are fun’, that kinda thing. But it’s once we get into some of the finer details that you’d best tread carefully!

This remains as true as ever. pic.twitter.com/HrlUnIxJgo

Be they small and trivial or huge and life-changing (well, as much as anything in this hobby can be), there are just some topics that will always create divide whenever they’re dropped into conversation, no matter how well-meaning. So today here are 16 examples just to show you what I mean!

WARNING: you may find you disagree with some of the points raised… 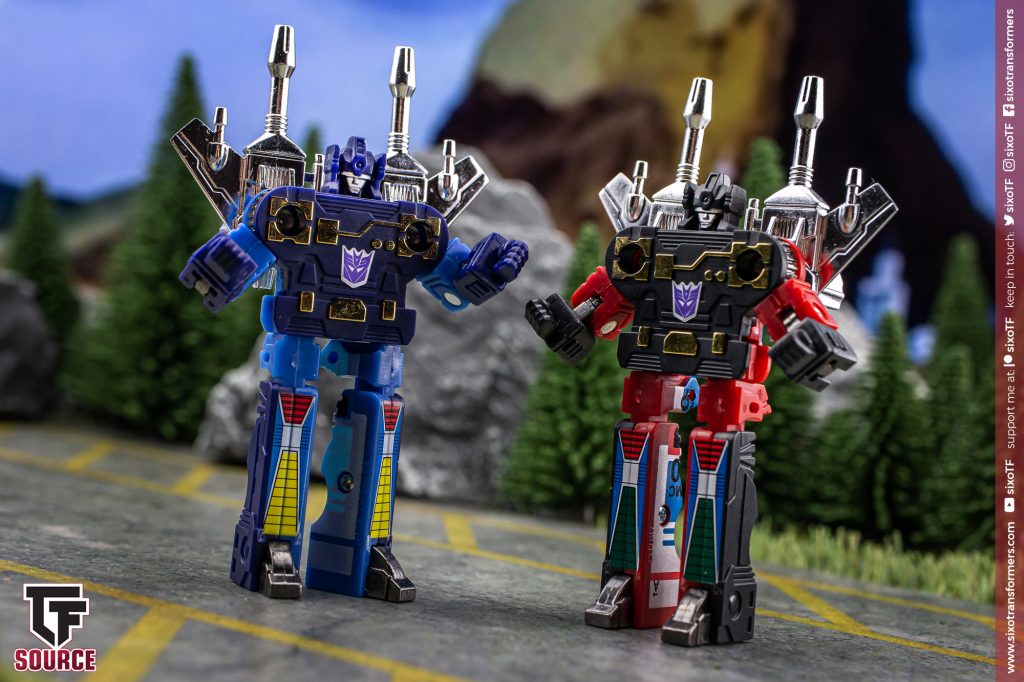 Well, let’s get this one right out of the way, shall we? Ever since the early days of the interwebs, it seems like Transformers fans have been getting into heated debates about everyone’s favourite Decepticon cassette twins and that doesn’t appear like it’s going to end any time soon! Which one is Rumble? Is Frenzy red or blue? No-one can come to a unified decision but needless to say, everyone has *strong opinions* on the matter. It’s even spawned the acronym, FIRRIB (Frenzy is red, Rumble is blue) or the alternative version, FIBRIR (and variations thereon). The main problem here is that whilst the original toys clearly had Frenzy as the blue one (with the Marvel comics and all other TF-related media following suit), the cartoon made an error in production by switching the colours round, and thus Transformers fans were doomed to disagree forevermore.

Some subsequent toys of the characters have kept the non-animated stance on their colour schemes (most notably their Masterpiece counterparts, rather interestingly!) but there have been examples that swing the other way, too! Really though, this one seems to depend on which source of G1 media you’re more of a fan of. 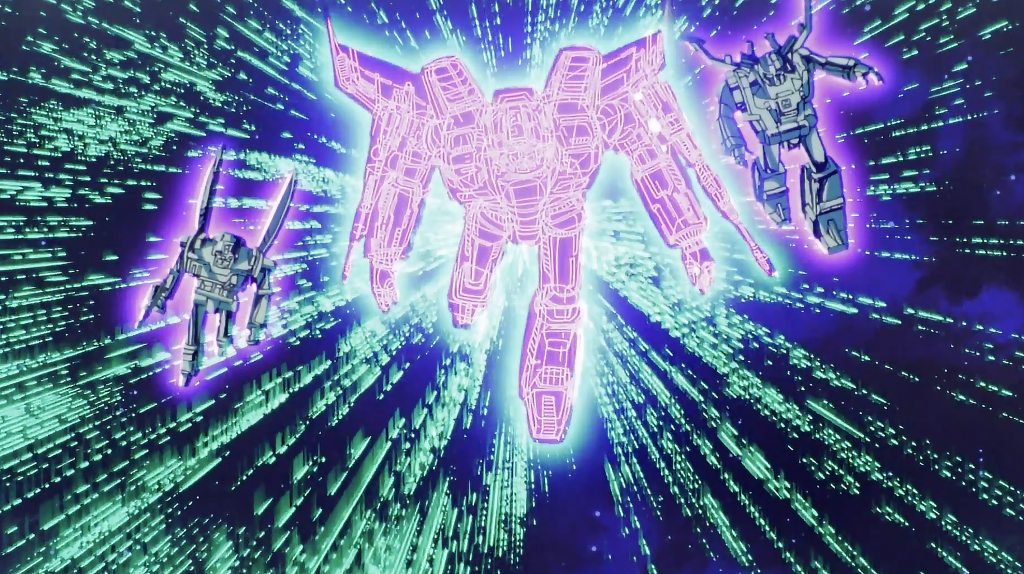 Another example from the early days of the fandom that continues to rage today, despite there seemingly being a fairly clear answer presented on-screen in the 1986 animated film itself! There we see both Cyclonus and Scourge being created by Unicron out of the remains of damaged or dead Decepticons. During the sequence, Thundercracker is presented in the middle of the frame and quite clearly appears to be the original identity of Scourge, with Kickback and Shrapnel becoming Sweeps. Then we see Bombshell in the foreground being turned into Cyclonus, with Skywarp behind him seemingly becoming a second, identical robot only referred to as his ‘armada’.

Now, the whole business with Cyclonus’ armada is confusing enough, especially as this second robot is never seen nor heard from ever again (even in the film itself), but it also pours fuel on the fire of exactly who was who to begin with! Many fans dislike the idea of Bombshell as Cyclonus, preferring the notion of the much-cooler Skywarp taking that role instead, whereas equally there are plenty of people who opine that it would make more sense for one of the Insecticons, with their cloning ability, to have become Scourge.

I’d personally argue that this one doesn’t really matter (and not just because it’s a children’s cartoon film from 35 years ago, mind!) as assuming the original Decepticons were even still alive at this point (and there’s every reason to think they may well have been dead), there’s no indication that their personalities were carried over after their reformatting anyway. It seems more likely that they were just raw materials for Unicron to create new soldiers out of, but ultimately that train of thinking is not going to stop this one being debated over and over either… 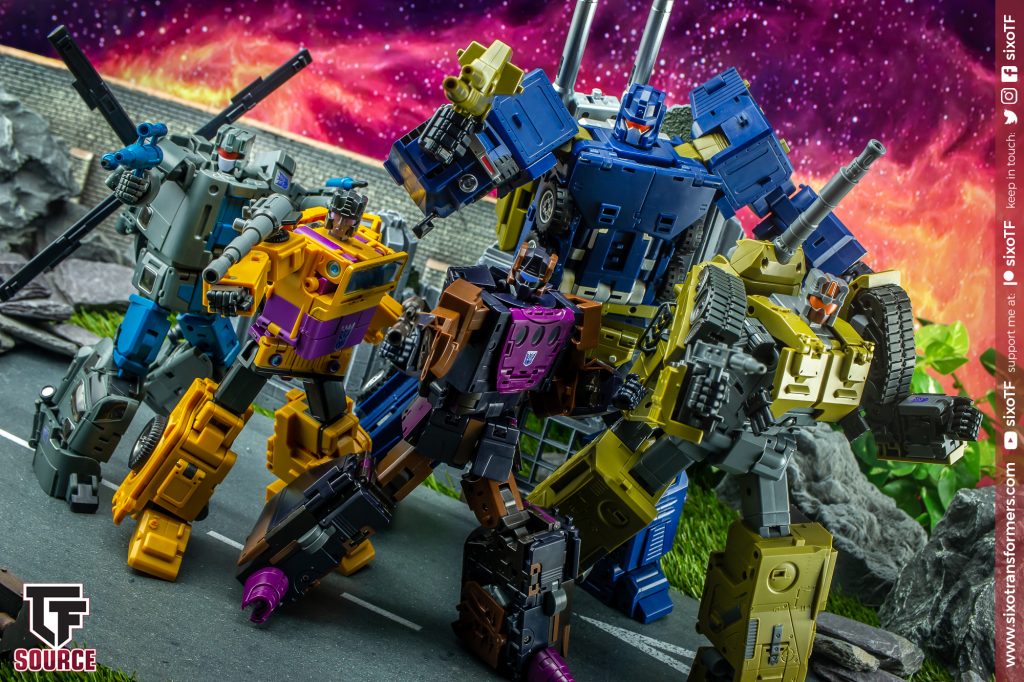 Of all the more divisive aspects of the hobby to crop up over the last ten years or so, few have created such split opinions as the so-called ‘third party’ scene. It all started innocuously enough with minor upgrade kits and additional accessories but before we knew where we were, there were unlicensed companies pumping out whole lines of toys all intended to represent characters from Transformers, but of course all without having any claim to the official IP. Many fans are absolutely fine with this or encourage it (with some even preferring what particular 3P companies are creating to HasTak’s own output), some are ambivalent, and many cannot stand the whole affair, feeling that the companies in charge of Transformers should do more to crack down on it all. It’s maybe worth also mentioning that the rise of 3P has no doubt contributed towards a lot of new collectors finding their way into the hobby as well, but this is one debate that everyone is going to continue having their own opinions about! 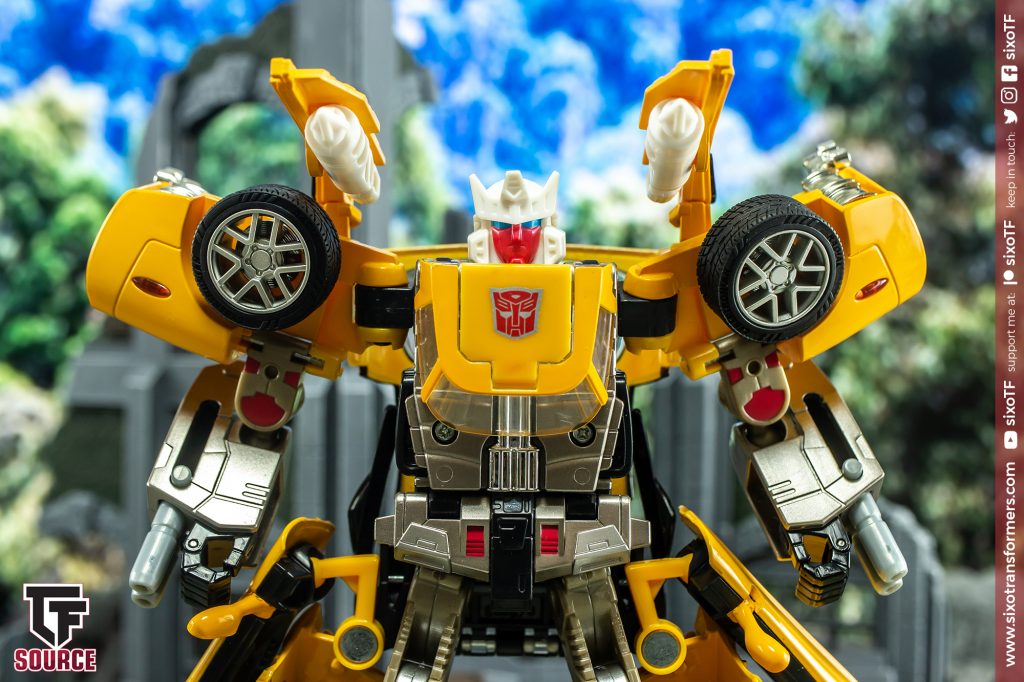 Barely a month goes by now where I don’t see this aspect of Transformers toys debated, with a lot of collectors absolutely hating the idea of so-called ‘faux’ parts being used to achieve a particular look in one or more modes (typically robot), often in an attempt to derive better accuracy to a particular source material. It’s come up again just recently with the new MP-52 Starscream, which uses a fake cockpit for the robot chest to try and appear closer to that character’s animation model, but, whilst some seem to believe this is a relatively recent phenomenon, in reality, it’s nothing new. For starters, the MP line has been doing it since the beginning (with MP-1 Convoy having a separate grill piece for both modes) and it’s been seen elsewhere too, including the likes of Binaltech Tracks’ chest as a clear nod to the original G1 toy. In fact, the first example seems to be Powermaster Optimus Prime from 1987, which uses a fake cab front for the smaller robot chest!

Still, don’t expect this long history to assuage the fears of people who simply cannot stand the solution, with complaints about it being a ‘lazy’ way to engineer such toys being all too common. Personally, I’d argue that these elements are quite often more clever than the simpler alternative in that they commonly use additional pieces and extra engineering to form the end result, but again, this is one that’s not going to be over any time soon! 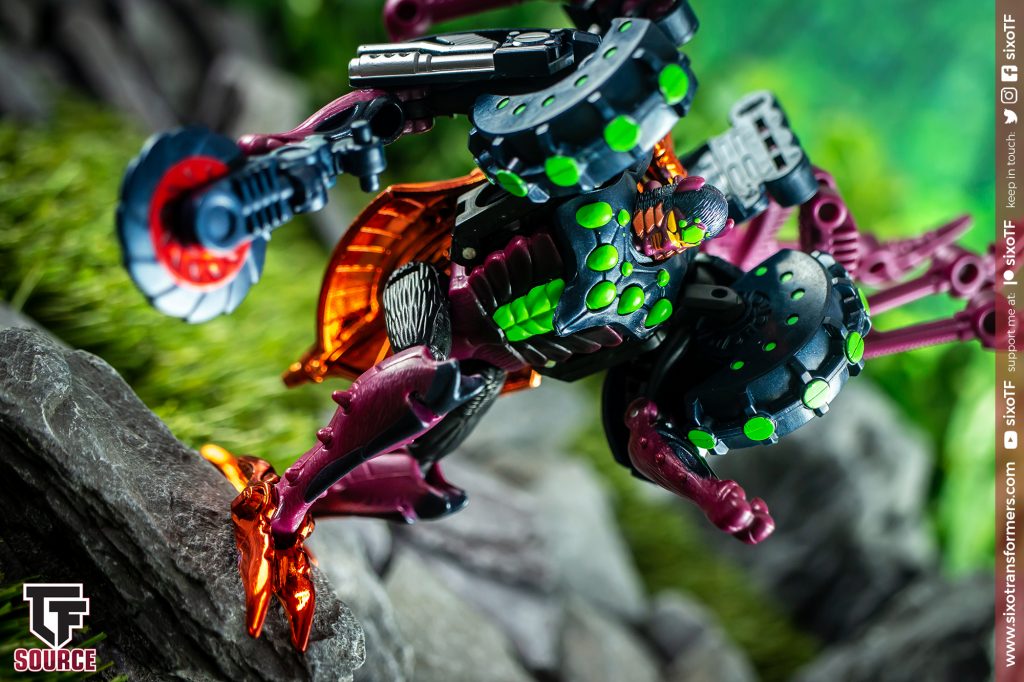 “Trukk not munky!” came the cry in 1995 when Beast Wars first debuted, and sadly it continued all the way through to 2021 and beyond. Yes, despite being the third part of a franchise that has clocked up another three decades and numerous other incarnations under its belt since, Beast Wars continues to divide fans even to today, with many simply hating the very idea of robots as animals (but presumably not the robot as animals you get in other parts of the franchise, ‘cos those are fine). The series was a huge departure from what had come before it when it first came out, although I do find it harder to understand why it creates a dichotomy for newer fans who have only more recently entered the hobby, given how well-established it is as part of Transformers history now. The debate may never go away, and especially not any time soon with so much new Beast Wars-related media on the horizon!

If Beast Wars split opinion then Beast Machines shattered it! Now it wasn’t just some G1 fans who didn’t like the new direction, but some Beast Wars fans too, especially given how it made numerous sweeping changes to the mythos and the series that preceded it. It’s unfortunate too, as the cartoon did a lot of things right and certainly took a real risk with the overarching tale it was trying to tell (seriously, give it another watch and you might be surprised by how good it is!), whereas the toyline also had some strong moments along the way. Sadly, Beast Machines is often given short shrift these days,  unfavourably (and unfairly) remembered as being a real blip in Transformers history. Let’s hope that changes one day, although I suspect not everyone will agree with that sentiment… 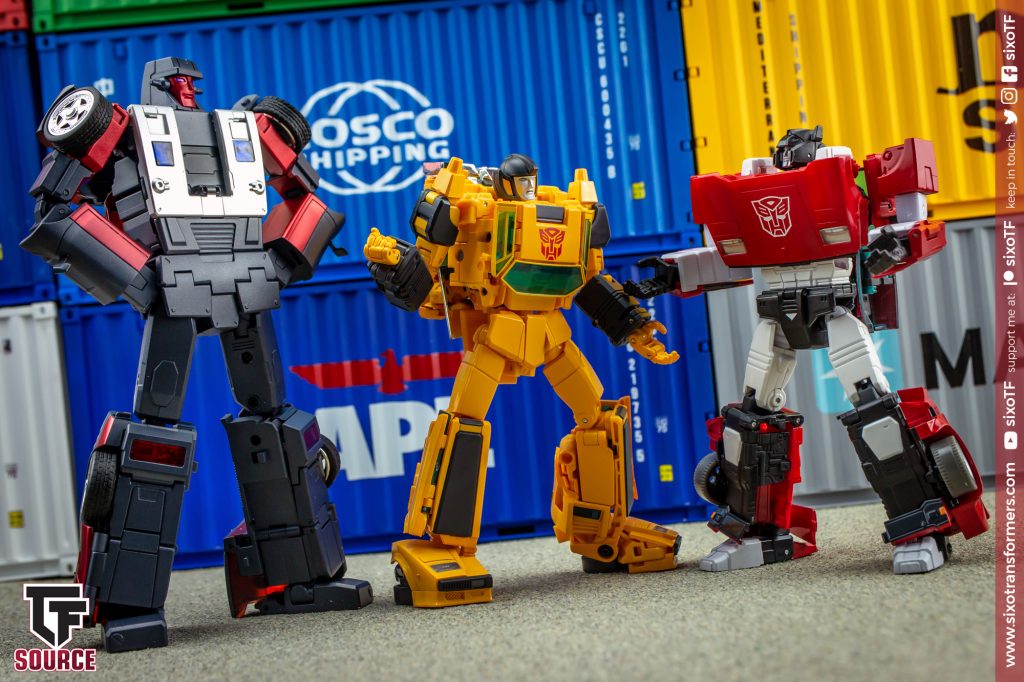 Transformers toys of yore never much cared for scale. You only have to look at examples such as G1 Bruticus to realise how far removed from realistic vehicle mode sizes many of the toys were at that time, and of course, the fiction followed suit. It’s become more of a consideration in recent times, but even then there are numerous ways that scale and Transformers continue to have a weird relationship. Just look at something like the Masterpiece line (and especially any third party elements) and see how often the ‘Holy Scale Chart’ is waved around in discussion forums and you’ll quickly catch my drift! As it turns out, people have very strong opinions on what size individual robots should be, often more so than the vehicles they turn into, although you will find that debate continuing to thrive as well! Does scale matter? I guess the answer is both no, not at all, but also, yes absolutely! 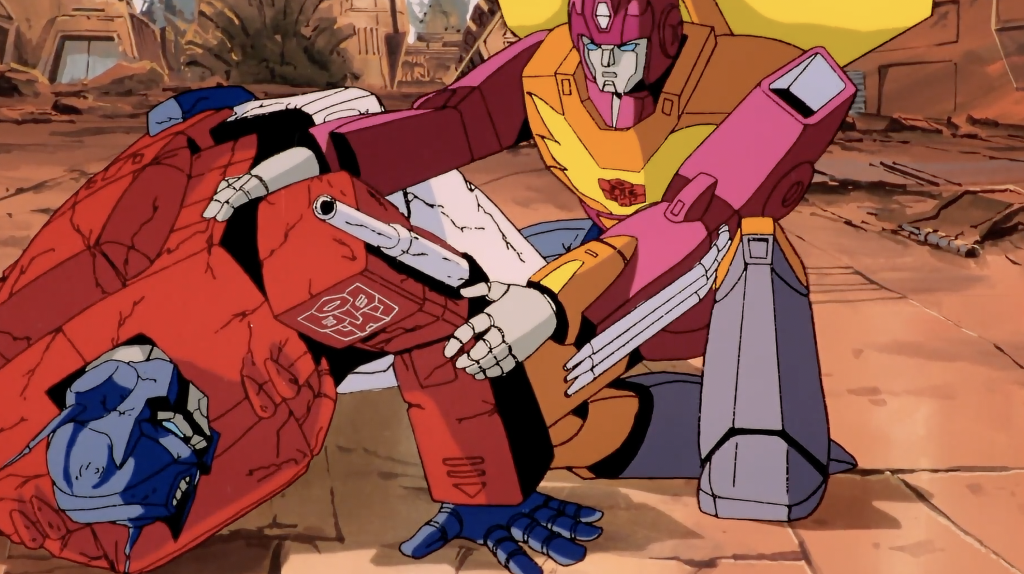 I pretty much guarantee that if you go into certain corners of the online Transformers fandom and simply mention Hot Rod’s name, you’ll get at least a few responses blaming him for being responsible for Optimus Prime’s death all the way back in the 1986 big-screen film! Optimus’ demise was kind of a big deal at the time, and unfortunately, people have very long memories it seems. However, the debate on this one is far from cut and dry, as there are many fans who believe Hot Rod’s intervention was not at fault as well. Plenty view it that he was simply trying to help, whereas there are also people who blame Kup for standing idly by and not assisting with the charge on Megatron, as it might have yielded a better result. At the end of the day, Hot Rod’s guilt was what carried him through to trying to be a good leader after Optimus but don’t expect any amount of atonement to settle this one any time within the next 35 years even.

So, that’s part 1… stay tuned for more controversial elements up soon with part 2!

This entry was posted in Source Articles Tagged with Beast Wars, Countdown, G1