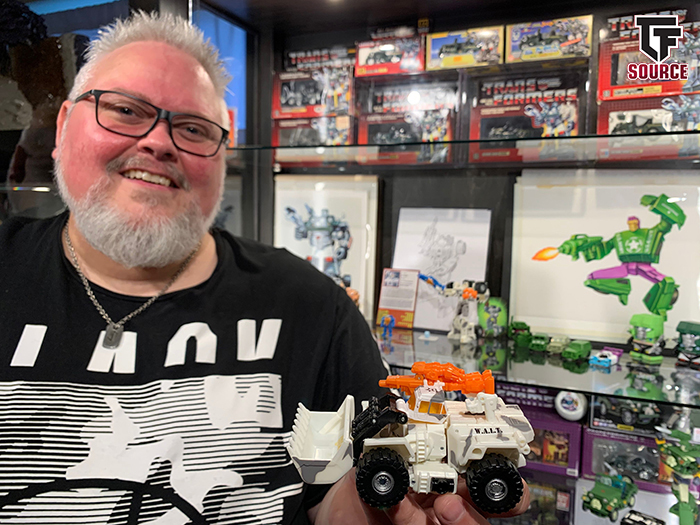 There are Transformers fans and collectors who have similar tastes to myself. Then there are others who have incredibly impressive collections of toys, art, or anything TF-related. Occasionally, you’ll come across collectors who are tremendously kind and good people, a credit to the community. Walter Mueller just happens to be all of the above, and I’m thrilled to have finally added an interview about Walt and his legendary Hound and original artwork collection to the many fine people we’ve interviewed here on TFSource Blog! I met Walt through a shared love of original IDW Transformers MTMTE comic art, and even had the privilege of spending time with him in person some years back. A man with his name on an official Transformers toy, much like his collection, he’s one of a kind. Take it away, Walt! 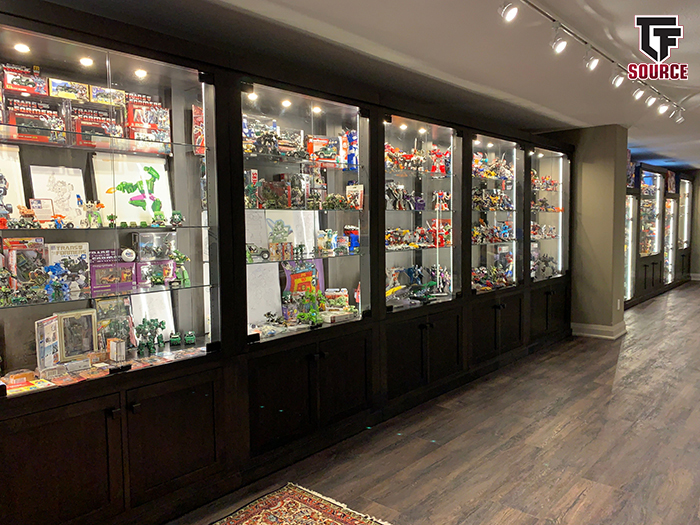 My name is Walter and I’m a Canadian Transformers art and toy collector. I was born in the late 70’s and grew up with the Transformers brand (among many other great 80’s brands). I recall running off the school bus every day to catch the epic line-up of Transformers, Voltron, Thundercats and G.I. Joe on TV.

While I consider myself to be a “lifelong” collector, I started to seriously focus on it in 1999. I began getting all the toys I missed out on as a child or ones I wasn’t allowed to get. This included any “gun” type Transformers such as Megatron and Shockwave. I was ecstatic to finally hold those G1 figures in my hand. 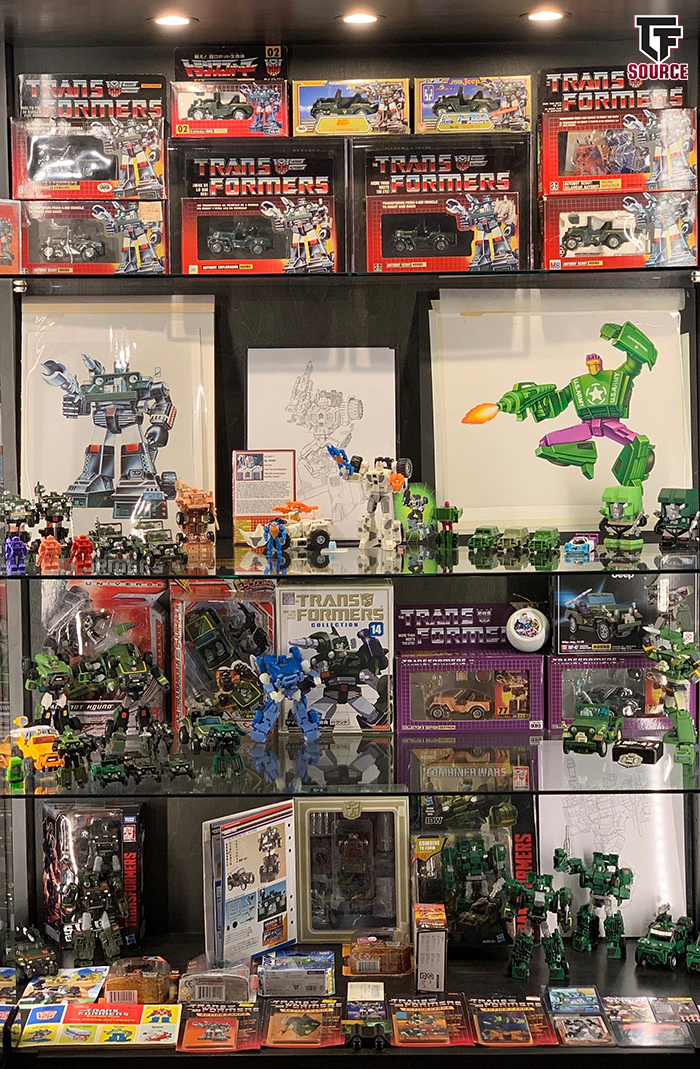 In the late summer of 2000 I found a vintage toy shop, Bounty Hunter Toys (still in operation today), near my work. I went into the store looking for a gift for my nephew and saw that they had a loose, complete G1 Hound in the display case. Hound was and still is my favourite Transformer of all time. I loved how they portrayed him in the G1 cartoon with his pleasant, curious demeanor and those amazing holograms. Since finding that figure I’ve been on a mission to collect every type of Hound toy, item and piece of art that he is featured in prominently going back to the Diaclone era. It’s been a fun adventure tracking that stuff down and thanks to my great friends I’ve added items like hardcopies, packaging and prototype art, rare releases and even some unreleased Hound items to my collection. 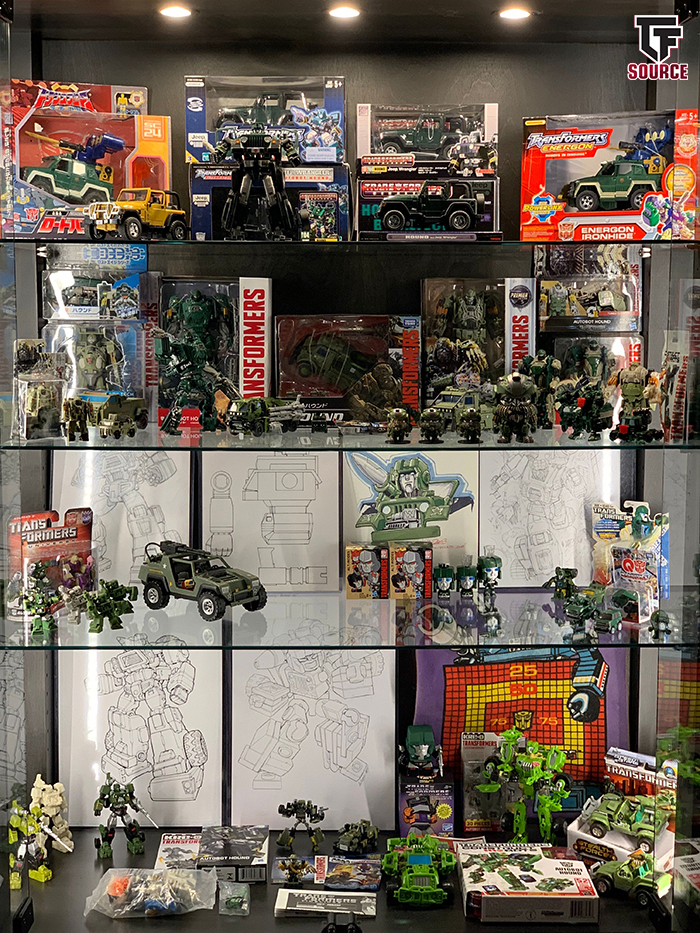 Speaking of art, that is mostly where I focus my collecting efforts nowadays. Back in 2004 when I read the Dreamwave Transformers/GI Joe crossover comic, something changed in my perception of art. The only way I can describe it, and as corny as it sounds, is that I finally saw what the artist (Jae Lee in this case) was trying to convey through their art. It was gritty, dirty and made you look for things all over the page. Expressions, movement, shadows, everything all of a sudden just popped off the pages. Since then I’ve been avidly tracking down some of my favourite comic, packaging, and promotional art pieces along with many in process, concept and unreleased items. I’ve made a lot of great friends along the way and have had the pleasure of meeting some of the biggest names in Transformers art going all the way back to the 1980s. 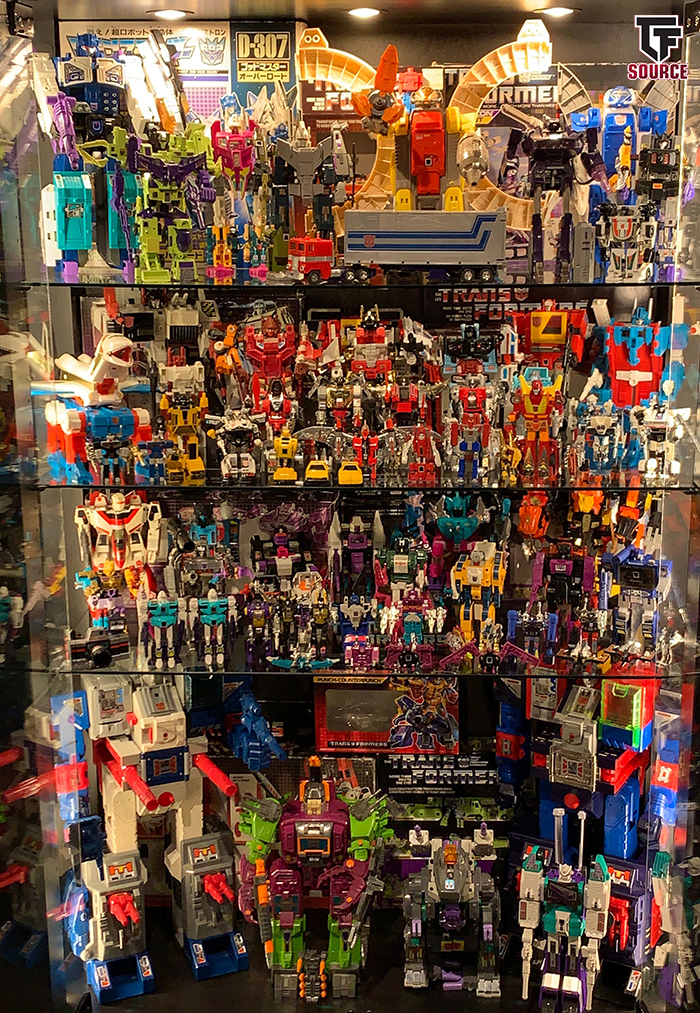 I’ve been collecting for quite some time and there’s been so many things that have changed. The introduction of Transformer internet sites, forums, conventions, eBay, Facebook groups and third party companies, to name a few. It’s been interesting to have seen the shifts in what was popular at any given time throughout the Transformer brand’s lifespan. I can’t say that I’m a fan of every iteration but the good definitely outweighs the bad.

I’ve also noticed that collections have gotten a lot bigger over time. While this might seem like a no-brainer, back in the day if you had one cabinet filled with items, it was extremely impressive. Getting your hands on items back in the 90s wasn’t quite as easy as it is today. Nowadays people have entire rooms or homes filled with collectibles. It’s quite amazing. 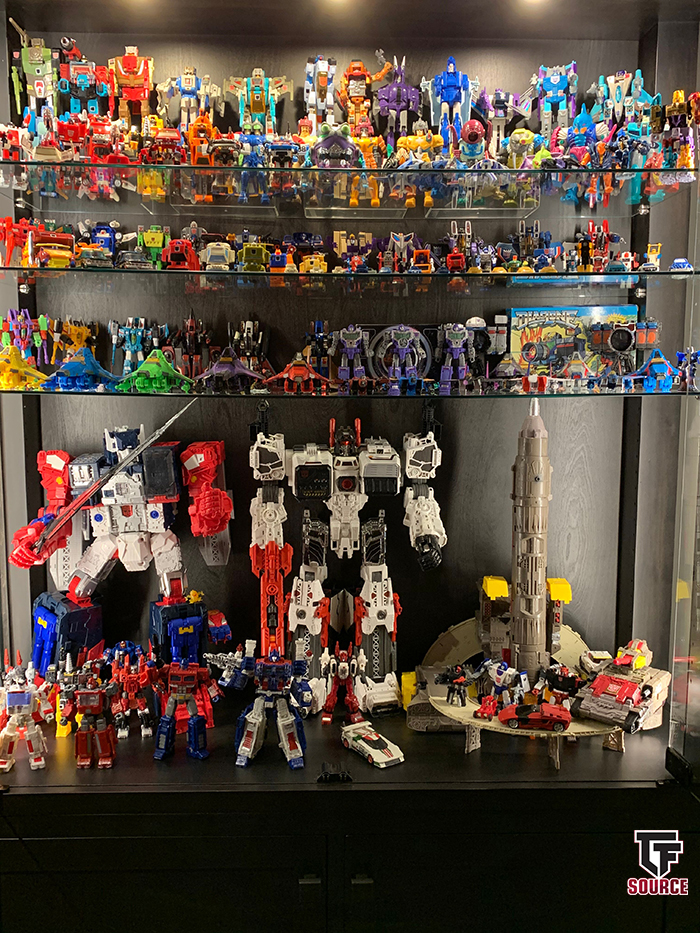 Here’s a question I’ve been looking forward to answering. I really hope that in the future, people who own very rare and unique items will be more open to sharing those items on the internet in the form of pictures and stories. There are so many great items and art pieces out there that have never seen the light of day. They are tucked safely away in people’s collections. I never really understood that mentality. If you have something of significance to the brand, wouldn’t you want to share it with the community? Personally I love seeing the process of how a toy or piece of art came to be. I have many items in my own collection that have artists’ notes or rough sketches scribbled on lay overs or in the margins of finished pieces and I find them fascinating. My friend Vance McLennan and I hope to share many of these pieces with the community in the coming months through a website so keep an eye out for that! 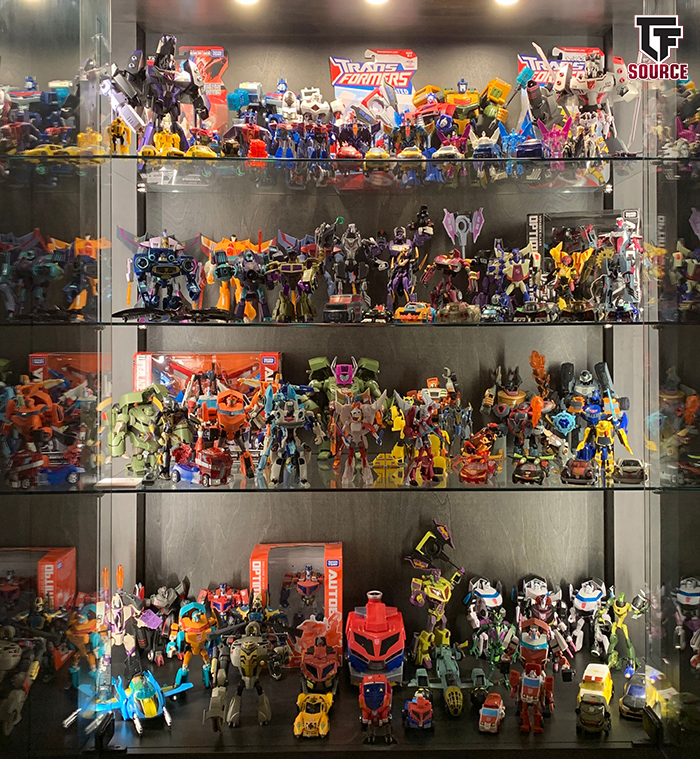 Making incredible friends would be my greatest find and/or success as a collector. Through my friends I have been able to find amazing art, such as the G1 and G2 packaging art for Hound, and many rare toys. But if I had to pick one story to tell, it would be about the events and exclusives of BotCon 2015.

I had been attending BotCon since 2008 and over the years became friends with Karl Hartman, Pete Sinclair, and Jesse Wittenrich. When my friends and I arrived in St. Charles for Botcon 2015, we checked into the hotel and I got a call from Pete Sinclair on my cell. He told me to come to his room because he had something to show us. In usual Botcon fashion, none of the add-on sets had been publicly revealed so I figured he was going to give us a sneak peak at that year’s sets. While that was technically true, I had no idea about how awesome they actually were. 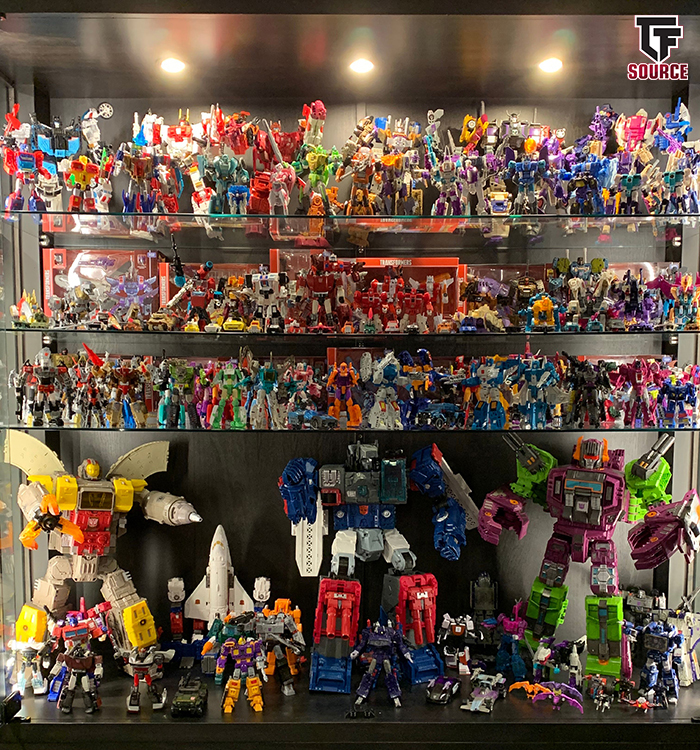 We got to Pete’s room and he welcomed us in. He then passed me what I guessed to be an updated version of the G2 Autoroller Sergeant Hound (to be fair Pete told me the year prior that they were thinking of doing the unreleased Autorollers so I kind of knew what to expect). What I didn’t realize was that when I turned the figure around it had the initials W.A.L.T. on it. At first I was stunned and thought that Pete and the guys made me a cool little custom of this figure since they knew I was a HUGE Hound fan. That was not the case. ALL of the BotCon Sergeant Hounds had my name on them! I went from being stunned to absolutely astonished. My favorite character…with my name on it…on an official Hasbro product…made by my friends, file card and all. I don’t think I spoke for a couple of minutes after realizing what was going on. I really didn’t know what to say. It was an incredible experience and a wonderful surprise.

Well in his previous collector interview, Ras told one of the best stories that I know so I don’t think I have anything that could top that. No one wants to hear my stories about twenty-five dollar Generations original packaging art, five dollar Hard Hero and Palisades statues, paying for G1 original box art and getting burnt toast in the mail, having drinks with Peter Cullen and Bob Budiansky at a Sushi Karaoke bar while Stan Bush is belting a tune out on the mic…yeah, pretty sure no one cares about those kinds of things. If for some reason you do, come find me at a TF convention, let’s share a pint and I’ll be happy to tell you all about it! 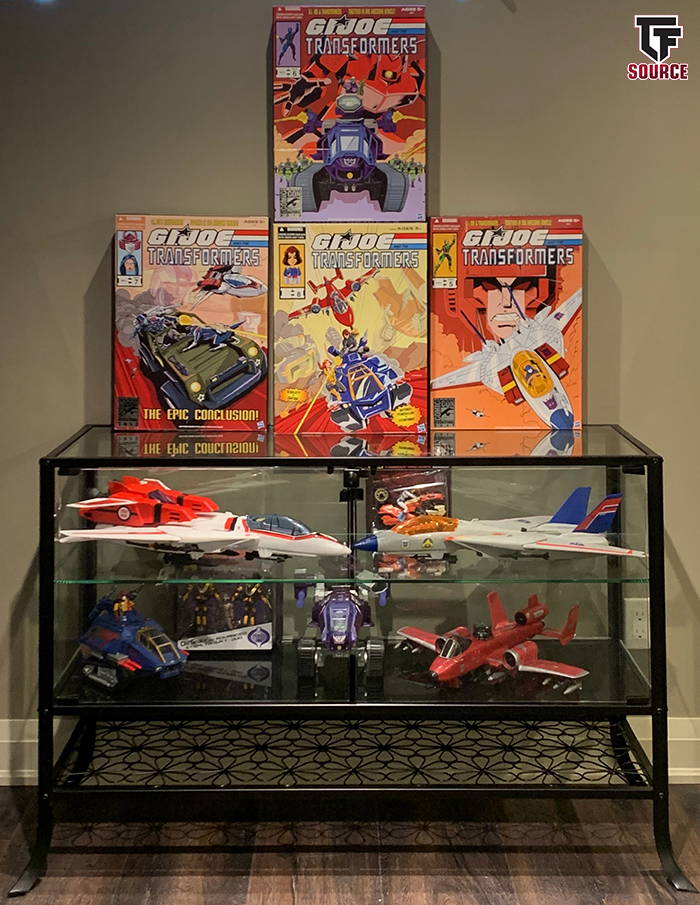 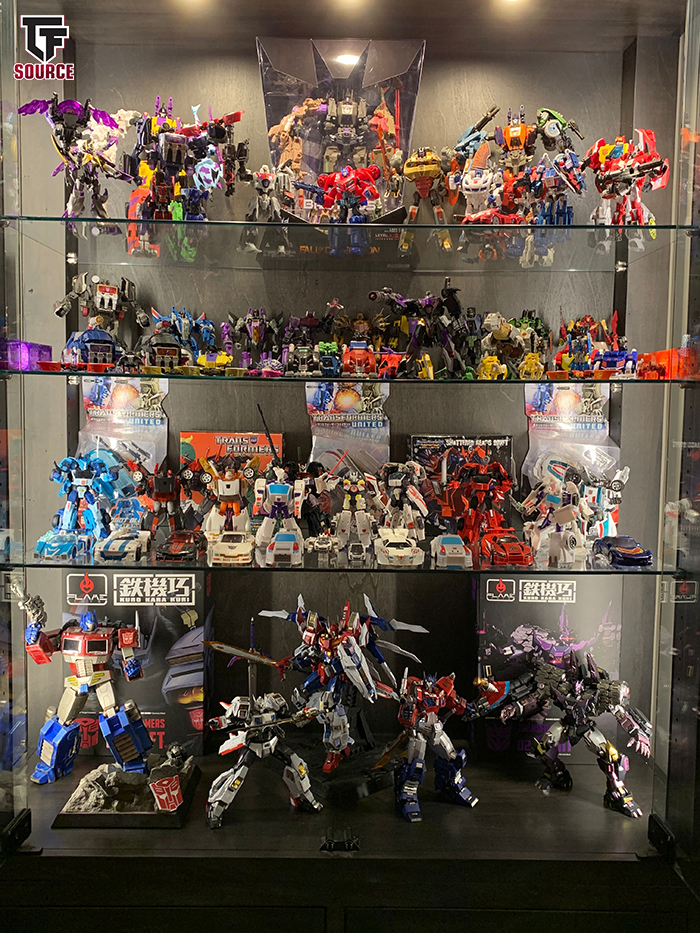 This is an extremely difficult question to answer and one that I’ve asked myself several hundred times. Should I go with a one-of-a-kind piece of packaging or comic art? A rare prototype? A limited run toy? There are so many factors to consider. But, after a significant amount of pondering, I would have to go with my very first Transformer. A G1 Minibot Windcharger, which I happen to still have. That toy is what started my fascination with the brand. I carried him around in my pocket for years. We had spent hours together in the back seat of the car, on the living room floor, at school in the dirt and in the backyard by the creek. His paint may be scratched, his rims may be rusty and his stickers are faded, but man, he’s what brought me to where I am today and for that I’ll always be thankful. 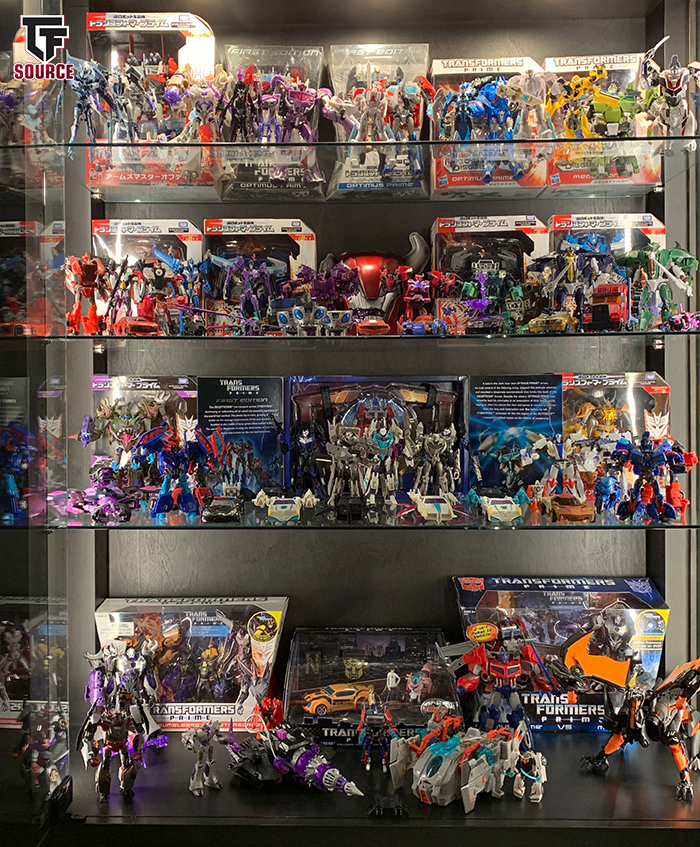 I don’t know if I could pick just one thing haha. I know a lot of people with extraordinary collections. It would likely be a toss up between your (Maz’s) Joustra Diaclone Jeep Hound, Ras’s Kabaya Hound and Vance’s original Wheeljack packaging art. They’re all beautiful and extremely rare pieces so I’d be happy with any one of those! 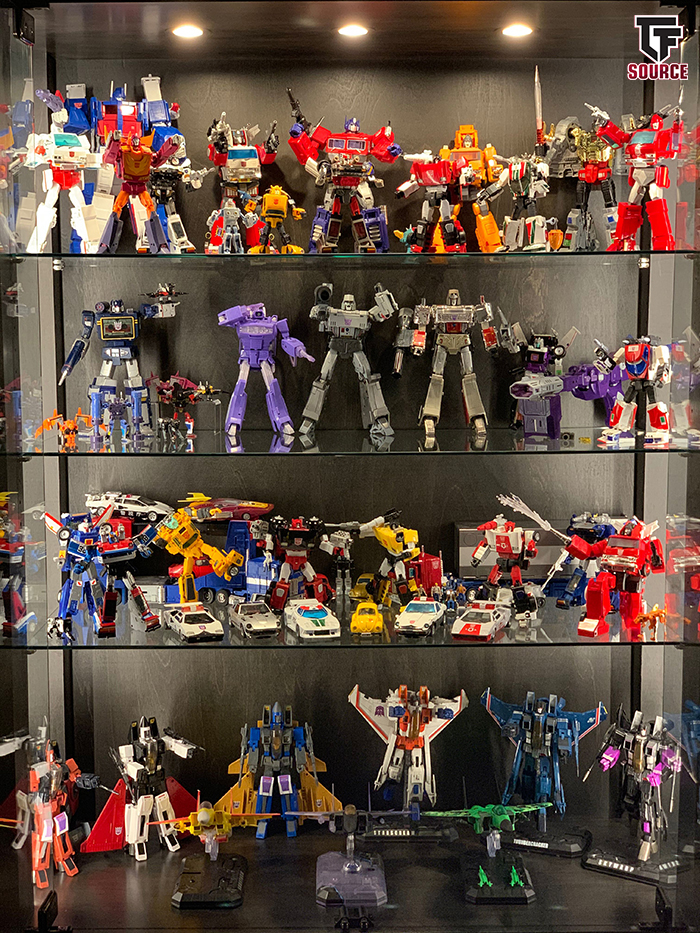 I’m sure its been said before, but collect what makes you happy. Don’t collect things other people collect just because you think that’s what you need to do. In regards to action figures, I’ve bought hundreds of them and sold even more trying to figure out what I want to have in a collection. Over the years I’ve discovered that you truly can’t appreciate something until you hold it in your hands. Watching someone’s review on YouTube or reading an article on a fan page (while extremely useful and informative) doesn’t give you a proper appreciation for a toy. That’s what makes conventions so great. Usually you can find someone who has a loose example of a figure that you may or may not be interested in. Pick it up and muck about with it, you may surprise yourself. I stopped collecting Transformer action figures for years to focus more on art, until I went to a convention and played around with a friend’s Combiner Wars figure. It took me about four seconds and I was sucked right back in. That afternoon we sat in the hotel room online ordering two years’ worth of figures that I’d missed. Alcohol may have had something to do with it, but I regret nothing.

Also, go to conventions and make some friends. Don’t just sit behind a computer screen and be afraid to get out there. This hobby is 1000 times more enjoyable when you have people to talk to about it. Everyone who attends Transformer cons are there for the same reason as you, they love robots. 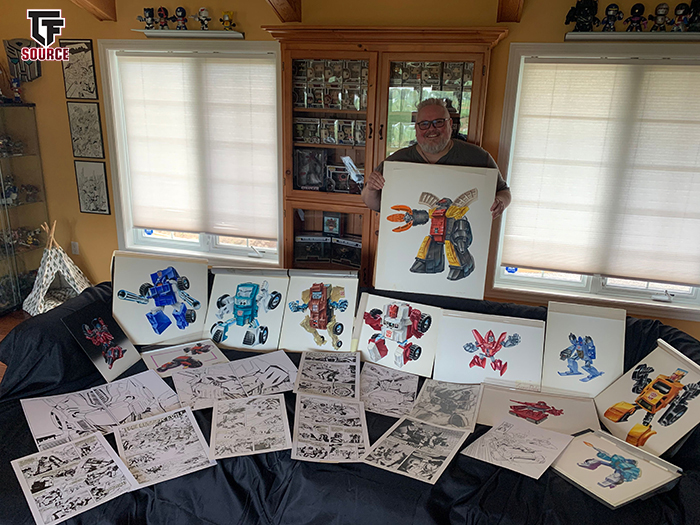 Many kind and gracious thanks to Walter Mueller for words and photographs.