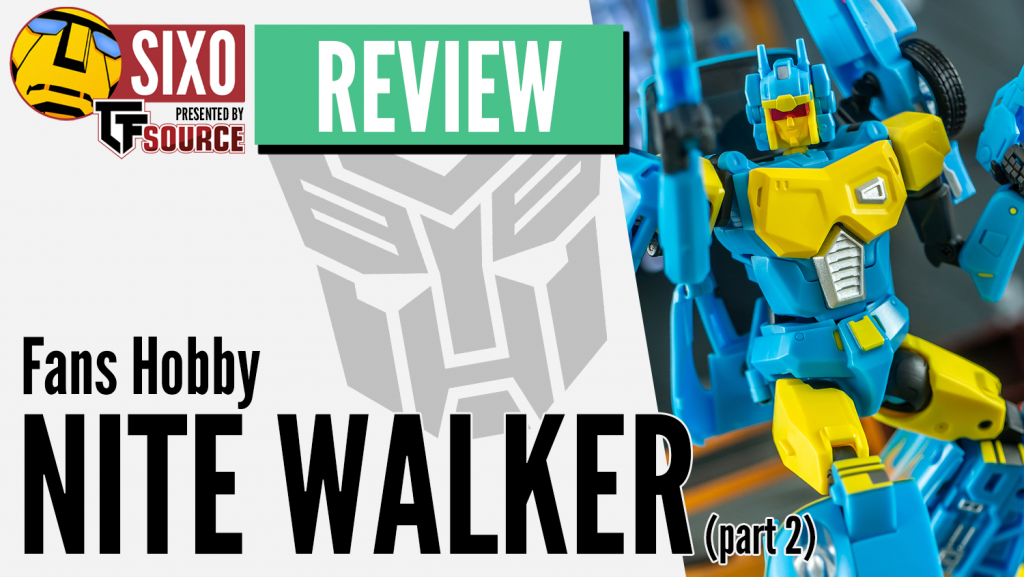 Welcome to the slightly later-than-expected second part of our extended look at Fans Hobby’s latest offering, Nite Walker! Last time, we took that vehicle mode for a spin and found it to be a fairly stunning recreation of Nightbeat’s original Porsche 959 alternate form, in all its flaming glory! 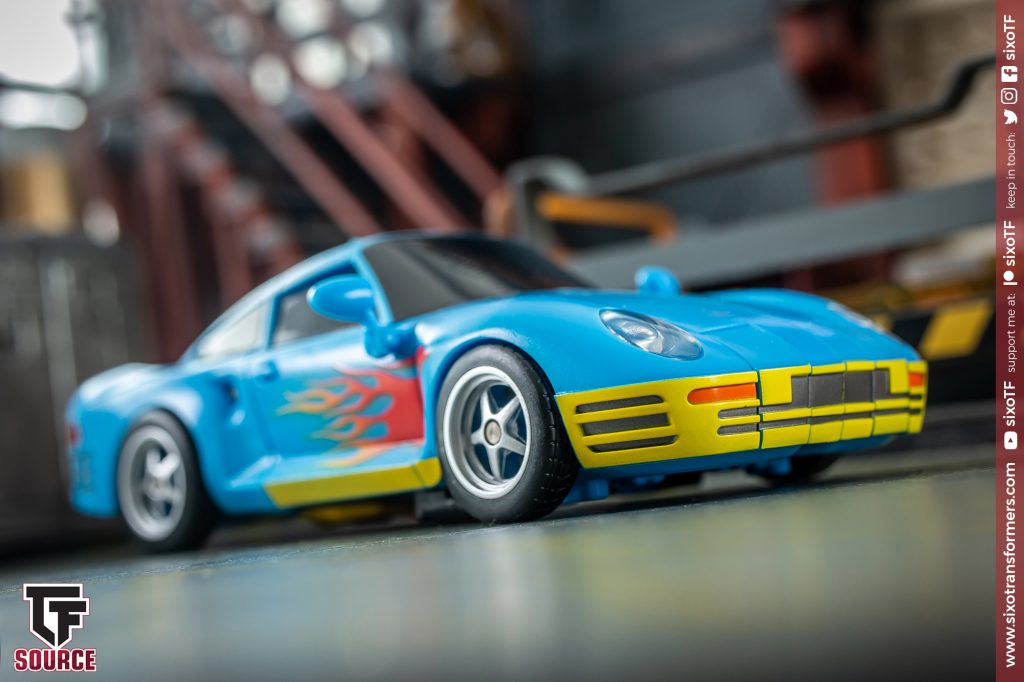 Well, now it’s time to turn our attention to the second half of this figure’s features, which means a transformation to robot mode! If you’ve handled their previous release, Athena, then it’s identical in every respect, but if not, you’ll find there’s some fun along the way here. At the very least, I think it’s a relatively simple affair, and nothing to bother anyone familiar with Masterpiece-level transformations of any kind. 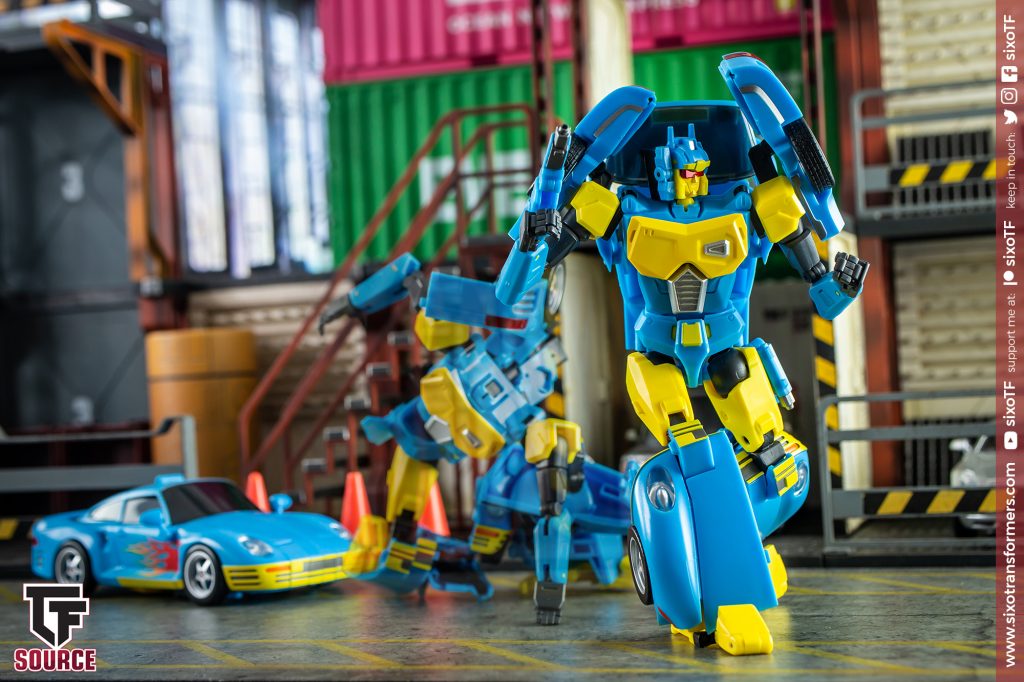 Most of the complexity is in the legs, which do take a moment to figure out if you’re not using instructions perhaps, but even then, it’s all quite straightforward. I have read a few grumbles about this design’s partsforming solution in the past, although personally, it’s not something that bothers me one bit. 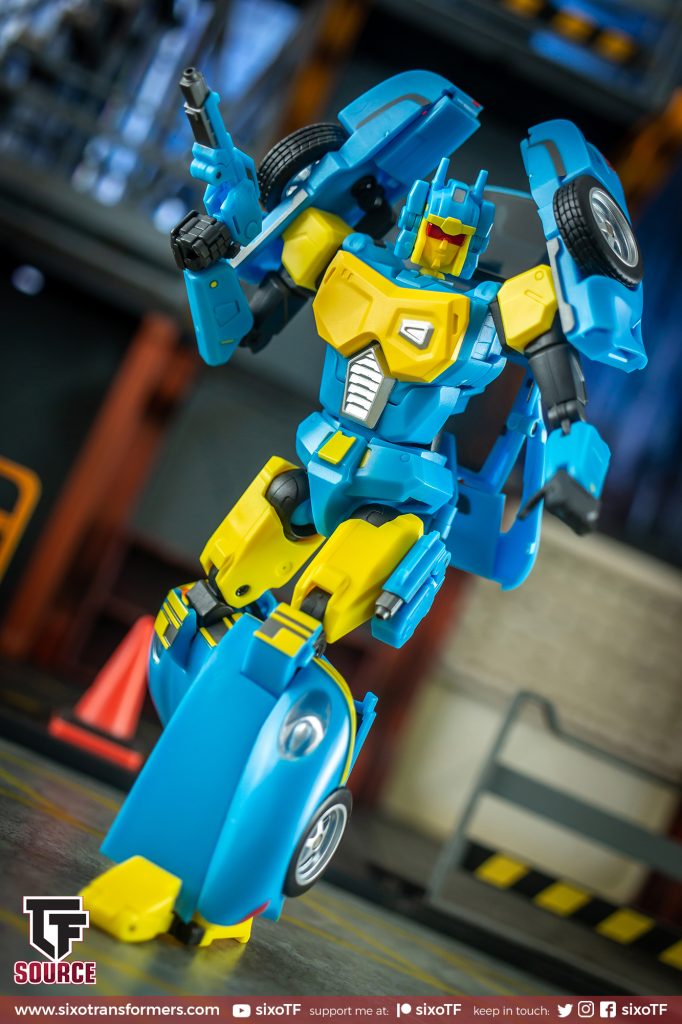 As for the result it leaves you with, well, I feel like this is one that’s going to divide opinion a bit, in many ways. Let’s first consider the robot form away from the context of the character’s traditional appearance and acknowledge that it’s a bit of a handsome beast, all things considered. 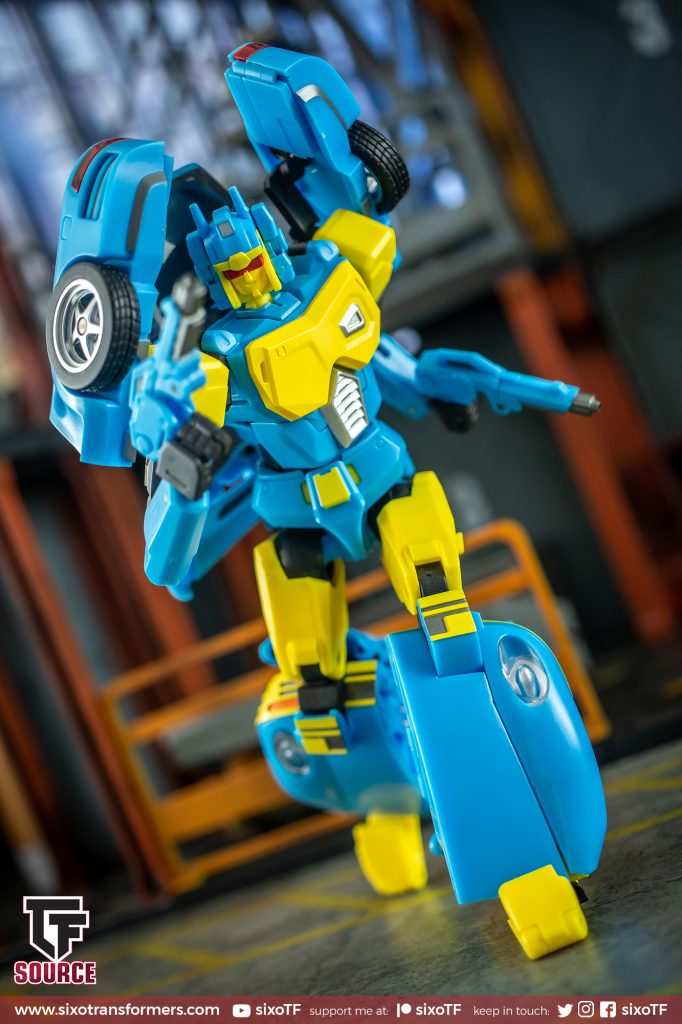 After all, the proportions are nice, the sculpt is attractive, the colours are certainly striking and overall it’s quite a pleasing toy to the eye, in my opinion. 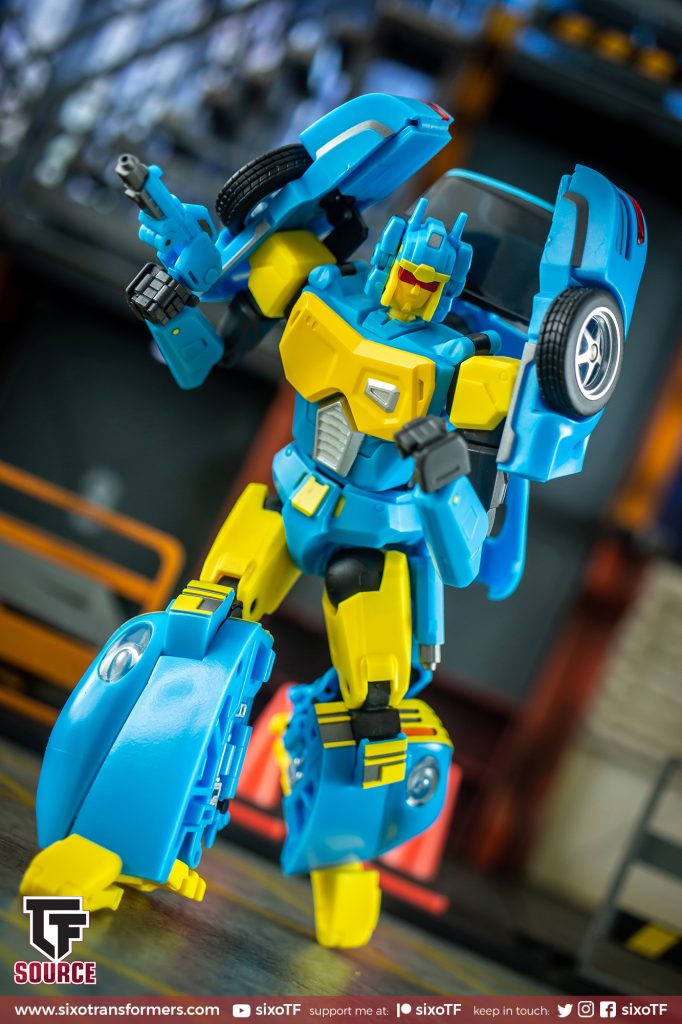 Again, almost everything you see here bar the colours is a direct hangover from Athena’s design, so much of the praise can be levied in that direction, but there’s plenty to appreciate all over again with Nite Walker too. 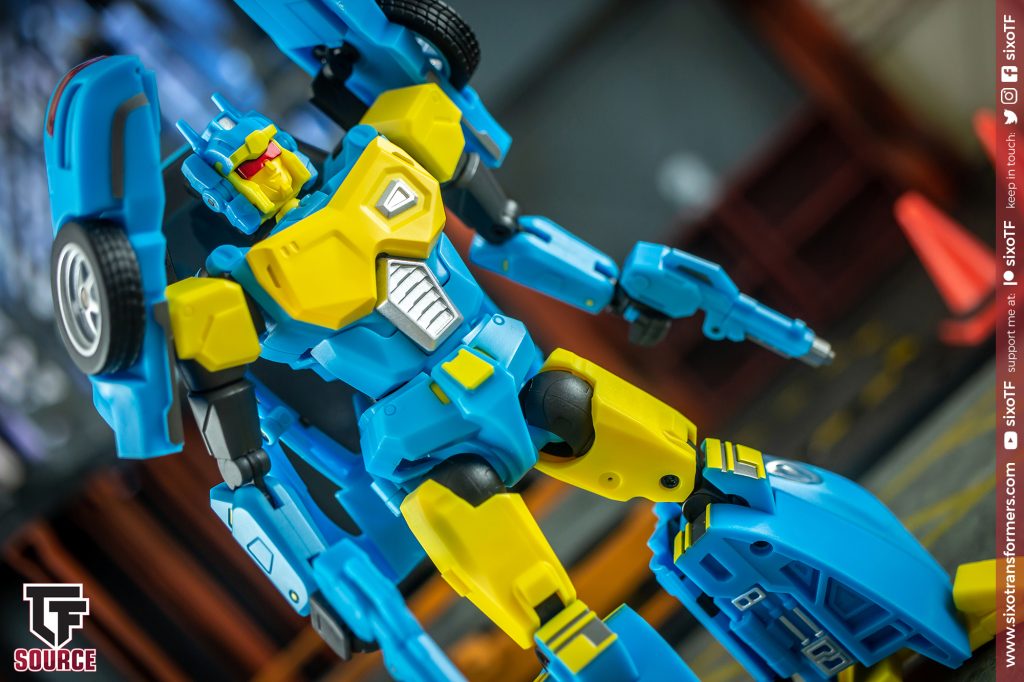 There is some remoulding going on too, and actually, more than you might first perceive, even when having them both in hand! The most obvious aspect is definitely the robot chest, with the yellow panel having been newly created to give Nite Walker more of an angular look than his mould mate. 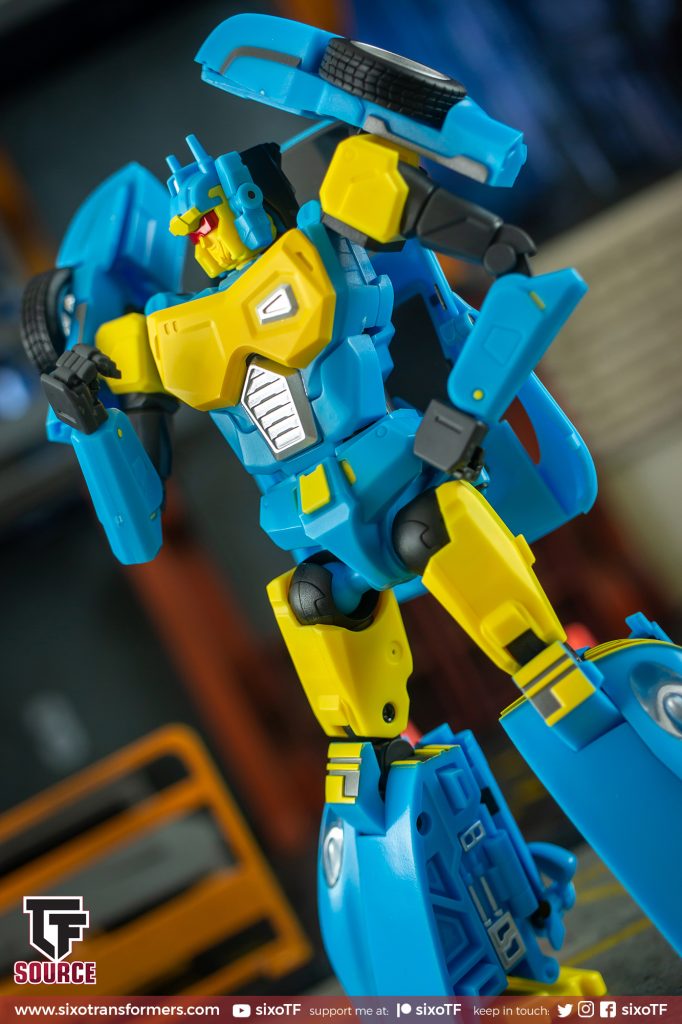 There’s more though, as various parts of the arms and legs, including most notably the blue forearms and yellow thighs, have all been redone as well. They’re still very similar in shape, hence it’s easy to miss, but again, it strives to give this version a more classicly chunky appearance. 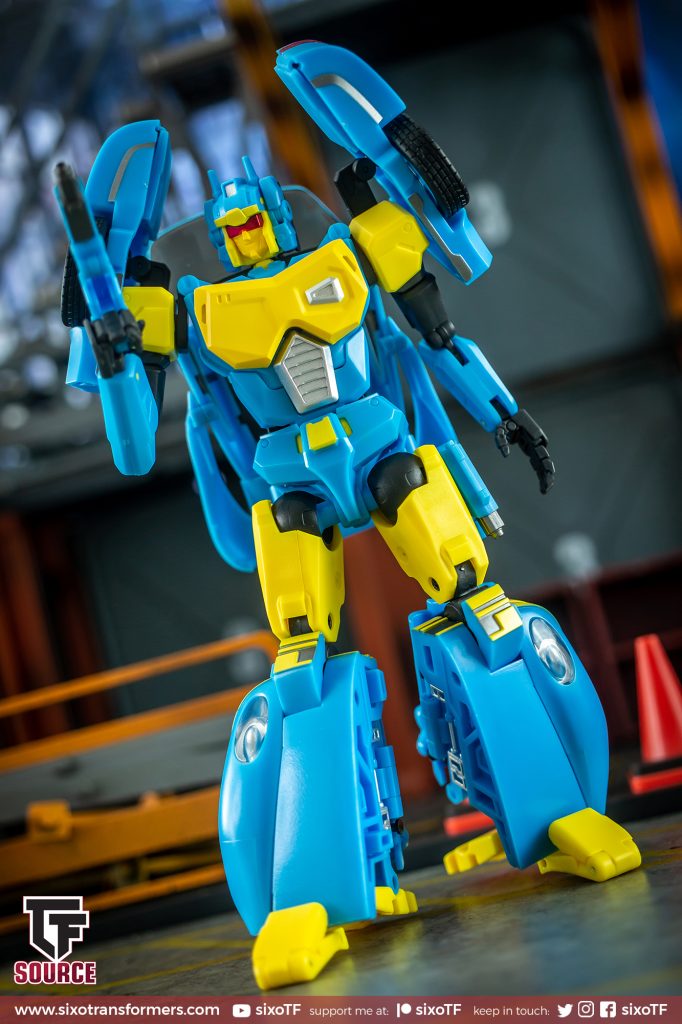 You might even notice that Fans Hobby have also added in a new part to the midriff, filling it out a fair bit and moving away from the curvier look of Athena. It’s all good attention to detail and makes Nite Walker feel fairly distinct from his predecessor. 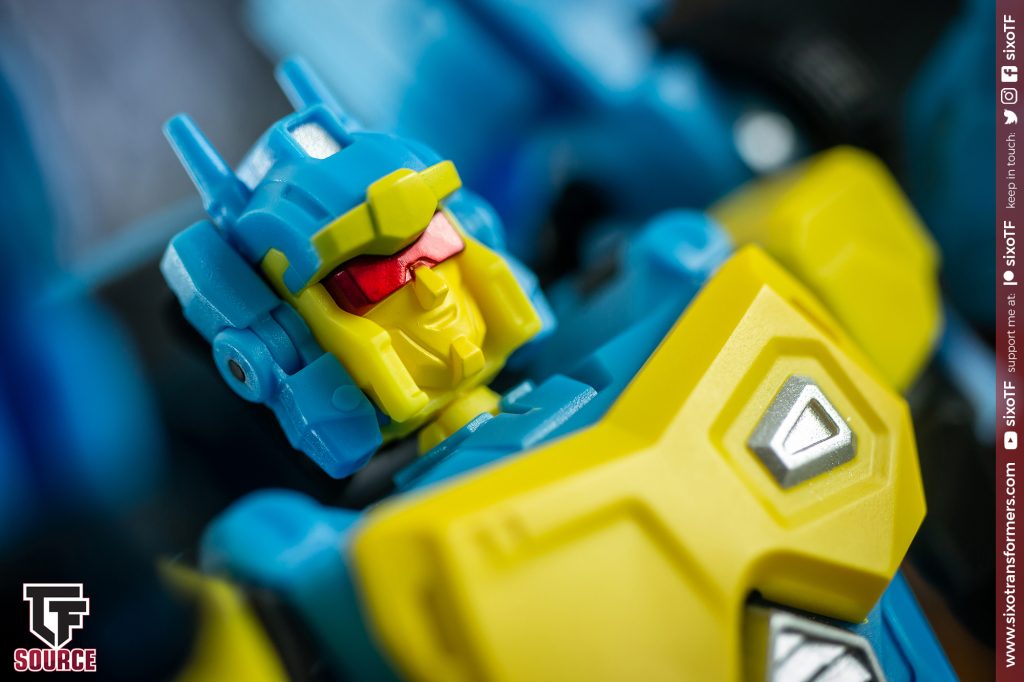 Then there’s the head, which again is mostly reused from Athena, though features an entirely new face. It’s cast in the same yellow plastic as found elsewhere, which is understandable given Nightbeat’s design, yet unfortunately, it does make some of the facial features a little hard to discern. I really like his shiny red visor (which is definitely a take on his comic persona) although I’m somewhat less keen on the forced grin going on here. Nightbeat definitely did his fair share of smirking in the comics, but this doesn’t quite get there for me. 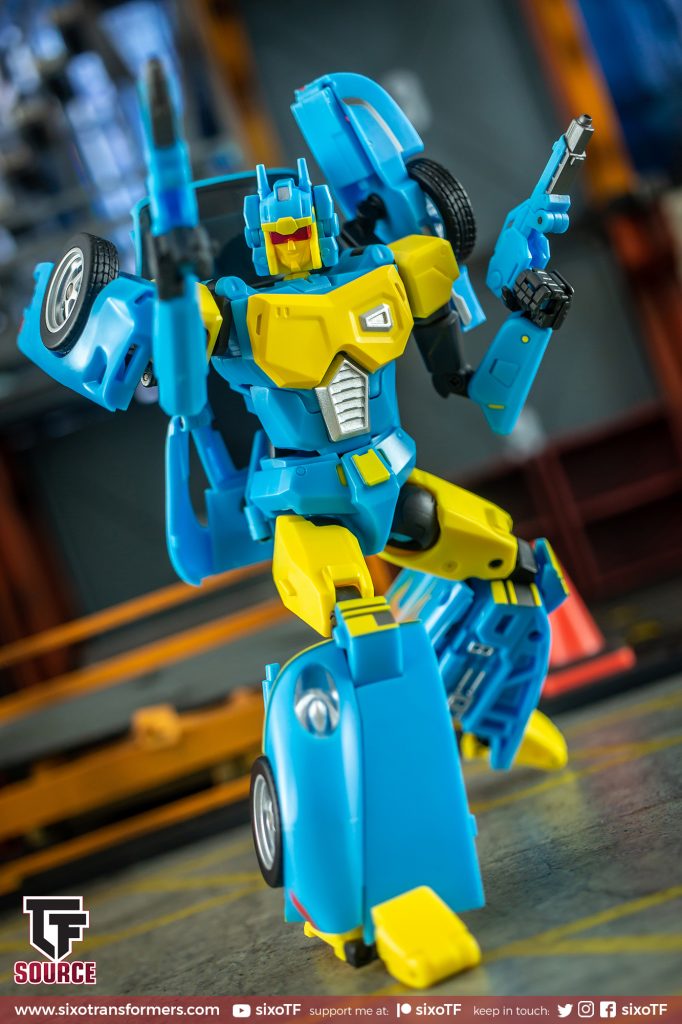 Still, the overall look is relatively on point and coupled with the colours, it’s enough to at least nudge you in the direction of the Autobot detective. Given how different Athena was to the original Minerva toy in order to better match that character’s animation model, it’s little surprise that this thing ends up taking some liberties with the source. 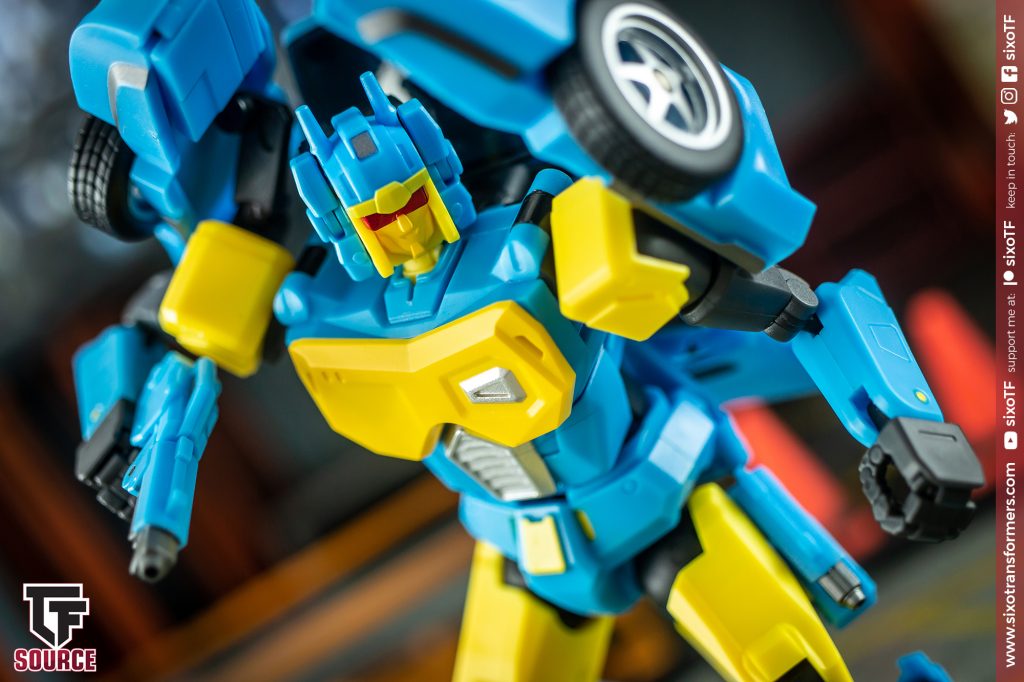 That is to say, try as he might, that Nite Walker will always be a bit of a compromise for anyone looking for a truly G1-accurate take. I’m sure that won’t be a problem for everyone, but I can well imagine it won’t be what some G1 fans had in mind, either. 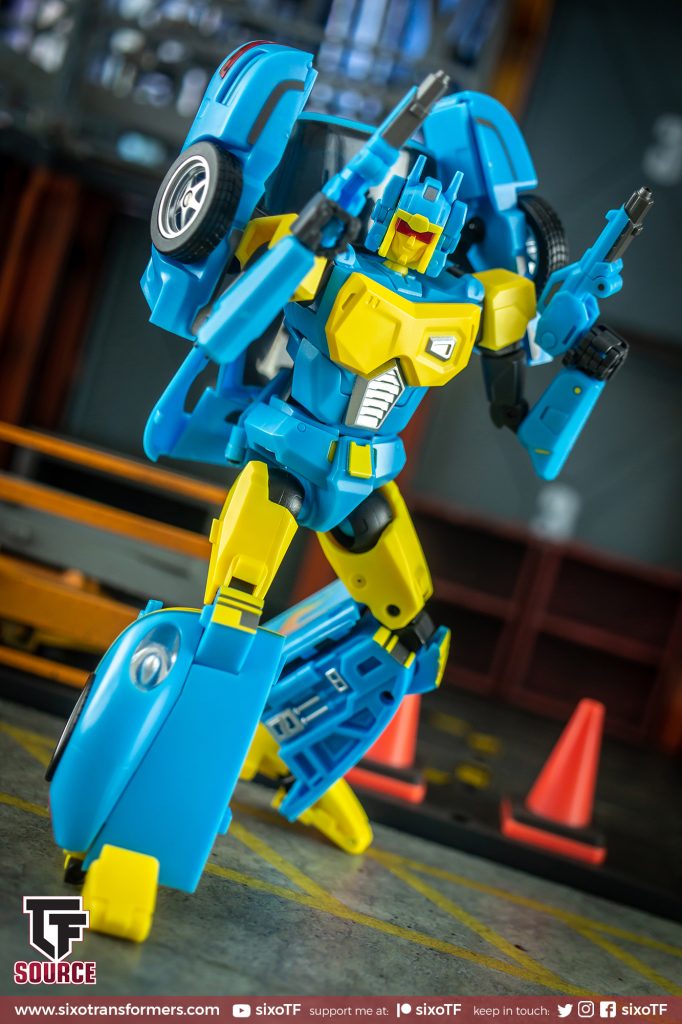 After all, I’ve already read numerous complaints about the ‘skinny’ arms and legs or the ‘feminine’ proportions on this toy, as evidently those things don’t sync up with how people imagine Nightbeat. I will say that I don’t believe the latter criticism rings true (and that’s without even addressing the erroneous notion that a more svelte frame is indicative of a toy not being ‘masculine’ somehow!), and I suspect has only happened on account of the original toy representing a female Autobot to begin with. 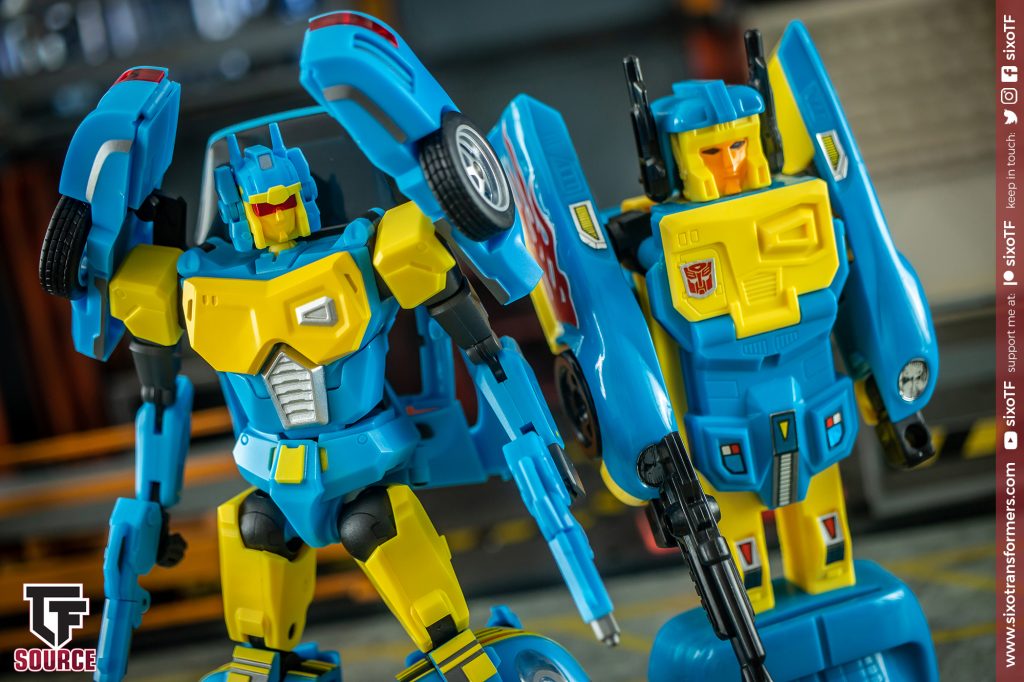 That’s even more evident when you line Nite Walker up against that same original toy, as it becomes apparent that actually a lot of the details are surprisingly on point, even in terms of proportions. Those thighs may look slim versus his chunky ‘boots’, but lo and behold, it’s not all that dissimilar on the original, either. I do think that perhaps the hips could have done with a little extra remoulding though but on the whole, I was surprised to see just how faithful some elements of Fans Hobby’s design actually are. 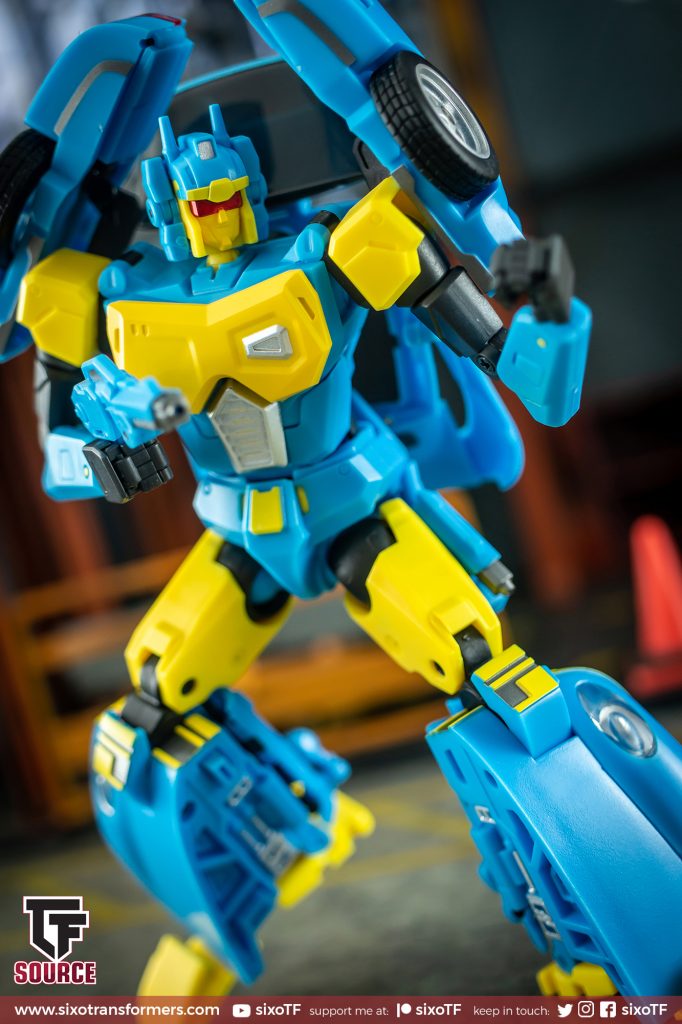 That said, he is rather stylised overall compared to how you might imagine Nightbeat in Masterpiece-style, so it’s definitely not an ultra-traditional and slavishly classic recreation either. Nite Walker is his own thing, clearly. 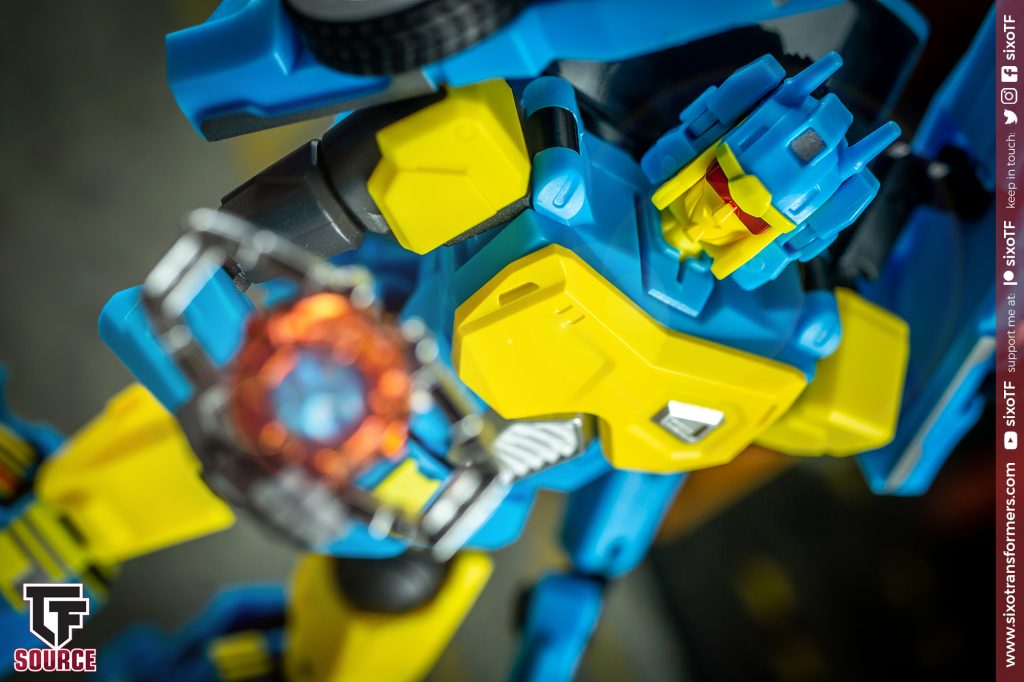 Yet still, he manages to do a good job at bringing Nightbeat to life somehow. I guess maybe I’m not looking to nitpick too much in terms of how faithful every inch of this guy is as, to be honest, I never expected to be handling a Masterpiece-styled toy of the character to begin with! Now that he’s here, there really is a lot to appreciate, despite whatever deviations from the source there may be. 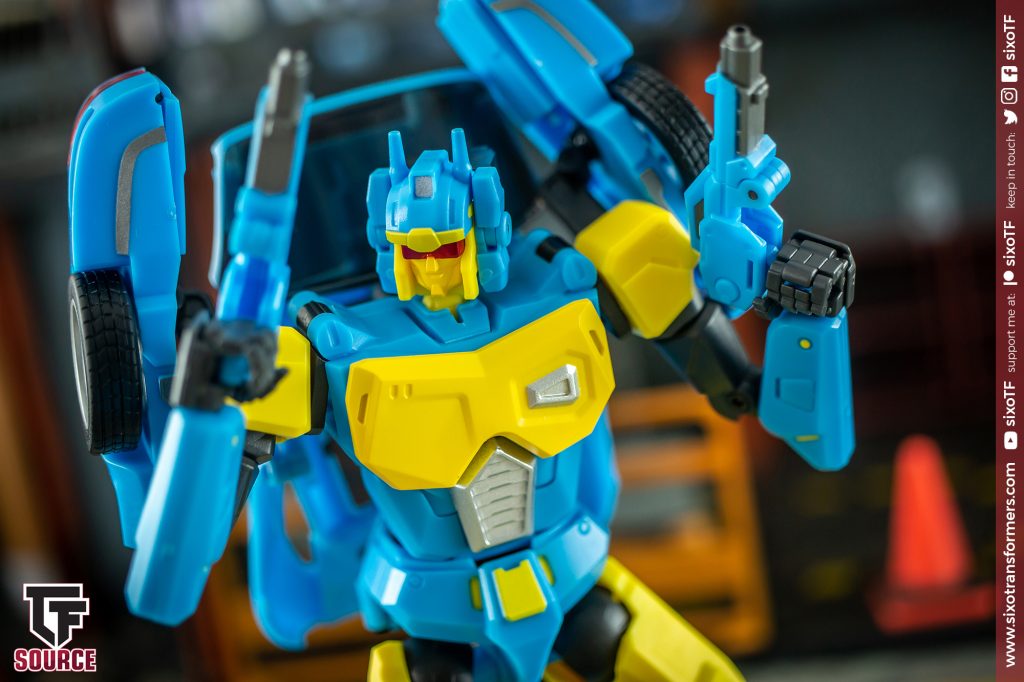 He’s also a lot of fun and carries over all of the gimmicks we’ve already seen on Athena, of course. That includes a pair of nicely-finished blasters, both of which peg fairly solidly into his hands. 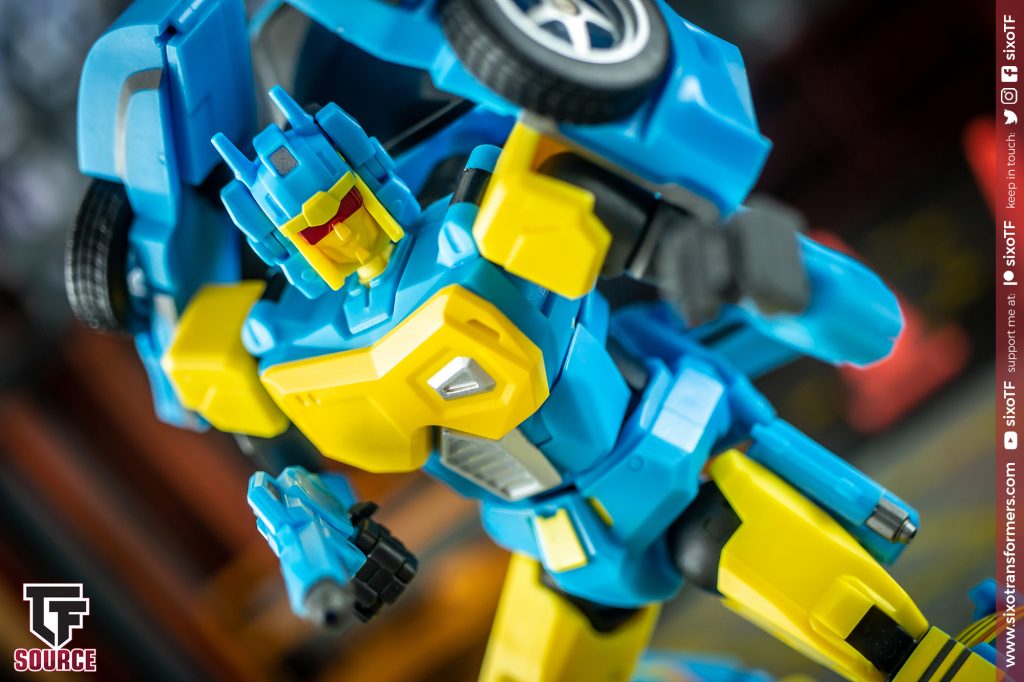 As an aside, I’m actually not too keen on the hand design itself here (especially as it can look a bit awkward in an open-palm pose),  but they do look ok with the guns in place at least. Alternatively, you can peg them onto the sides of Nite Walker’s hips for a bit of holster action. 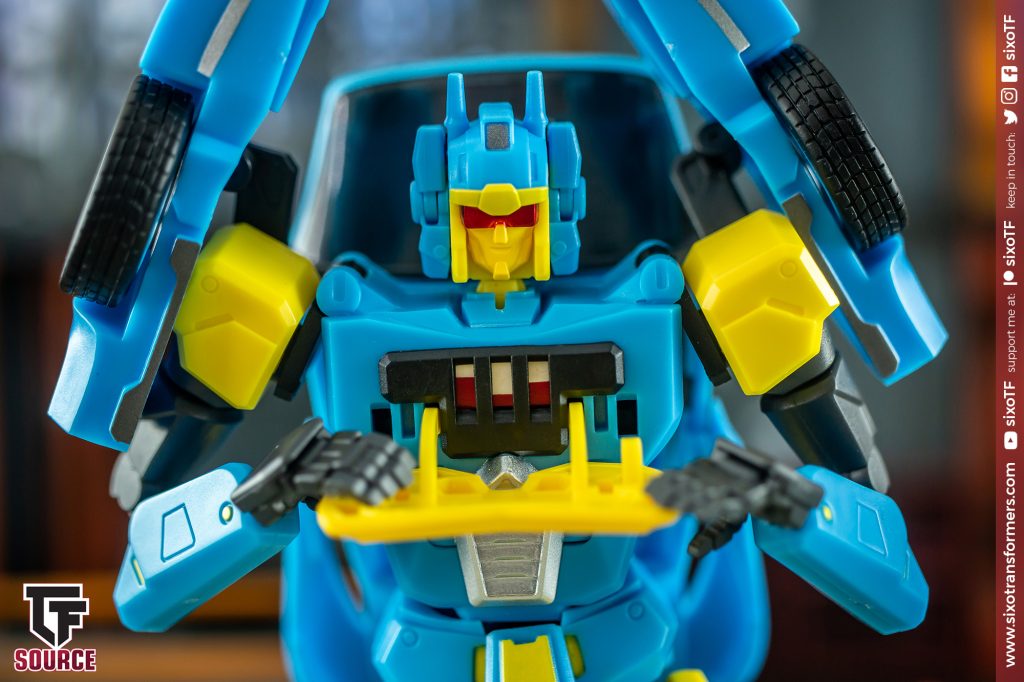 Naturally, you get all of the gimmickry involved with the Headmaster partner, too, and in this case that includes an opening chest panel as a homage to the 1980’s toy. There’s even a ‘working’ tech spec mechanism, whereby the three meters move as you open the panel, although they don’t necessarily align to any particular stats. A nice nod, all the same. 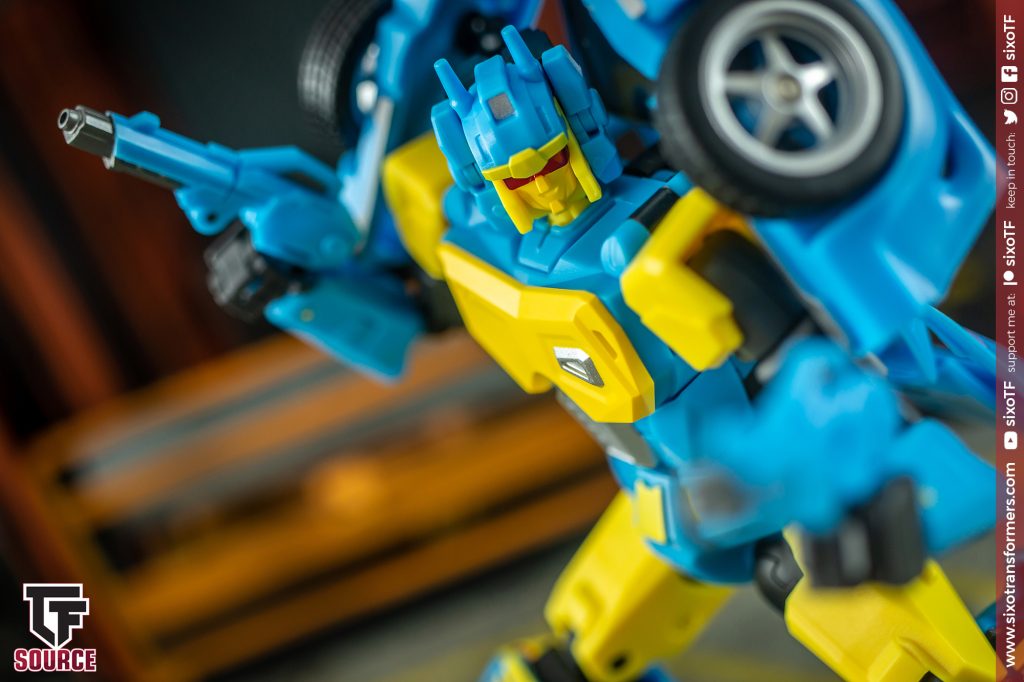 Overall then, there’s a fair bit to appreciate about Nite Walker. I think if you are looking for that ultra slavish, stepped off the page incarnation of the Marvel comics character, you may find this a beatf away from that, but if you’re willing to allow for a bit of room for interpretation, he’s a lot of fun. 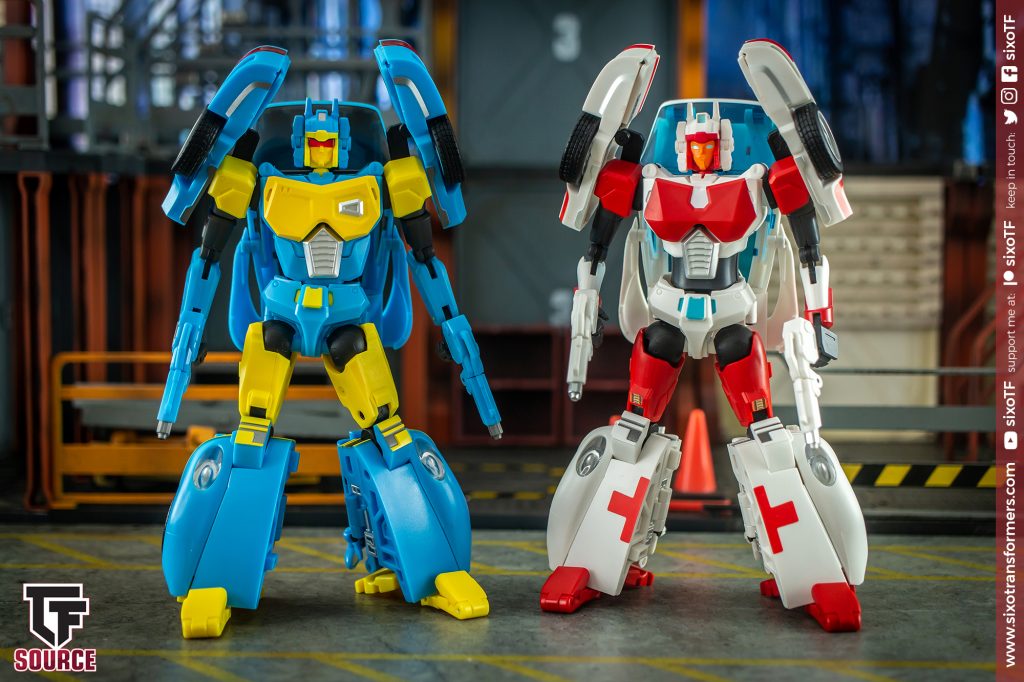 Again, I’m impressed with Fans Hobby for how much they have at least tried to make the repaint feel different to the original too, even if some of it is not necessarily obviously right away! Looking at both this guy and Athena side-by-side, I do find myself missing some of the little details like the Red Cross emblem and the red trim right the sides, but still, there’s enough going on here to warrant a second showing. 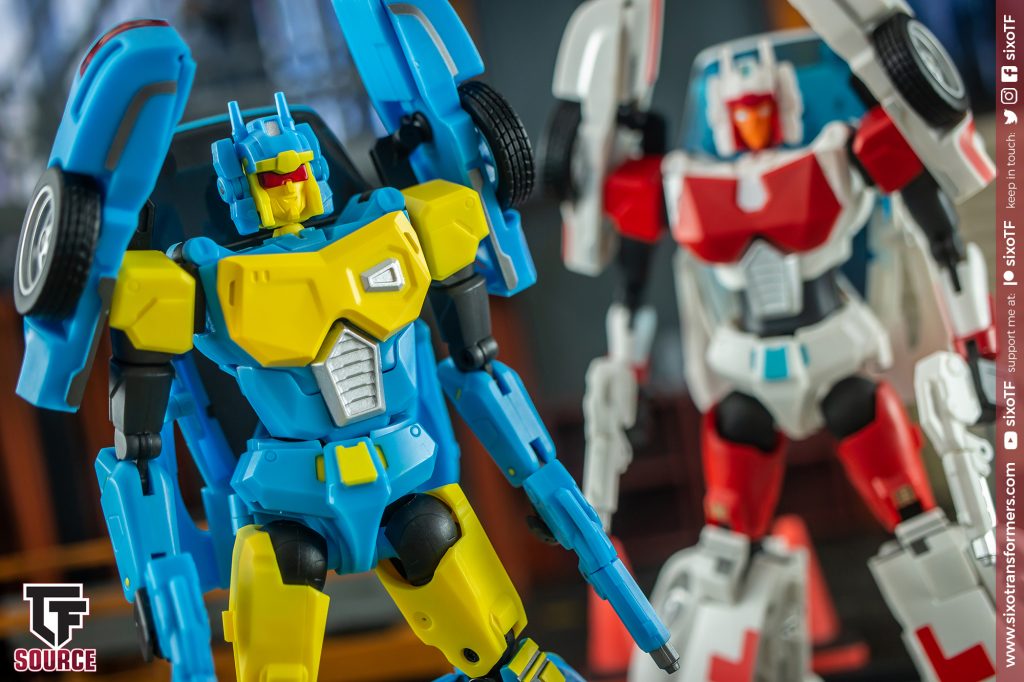 Really though, it’s just great to see a company willing to take the time on repaints like this to begin with (something I often find myself praising Fans Hobby for). Minerva was already a bit of a punt but the idea that we’re going to see complete line-ups of both the Masterforce and Hasbro second year Headmasters is very exciting indeed! 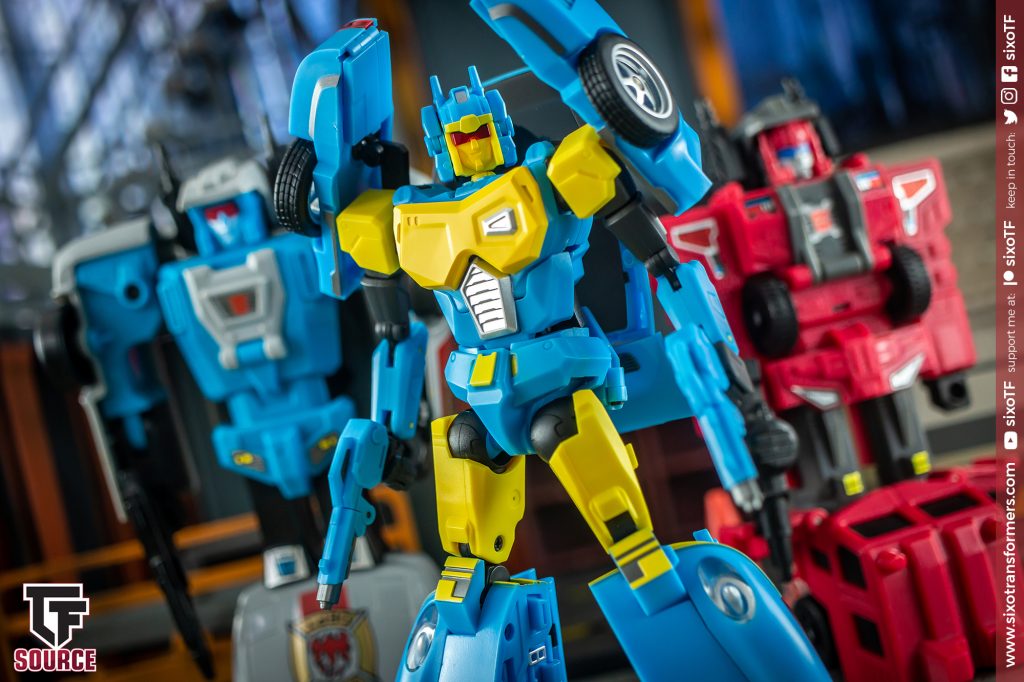 I also can’t believe the rate at which they’re cracking on with this lot! Hard to believe that Ace Hitter is on the way very soon already, hopefully with a Siren repaint of its own to boot. 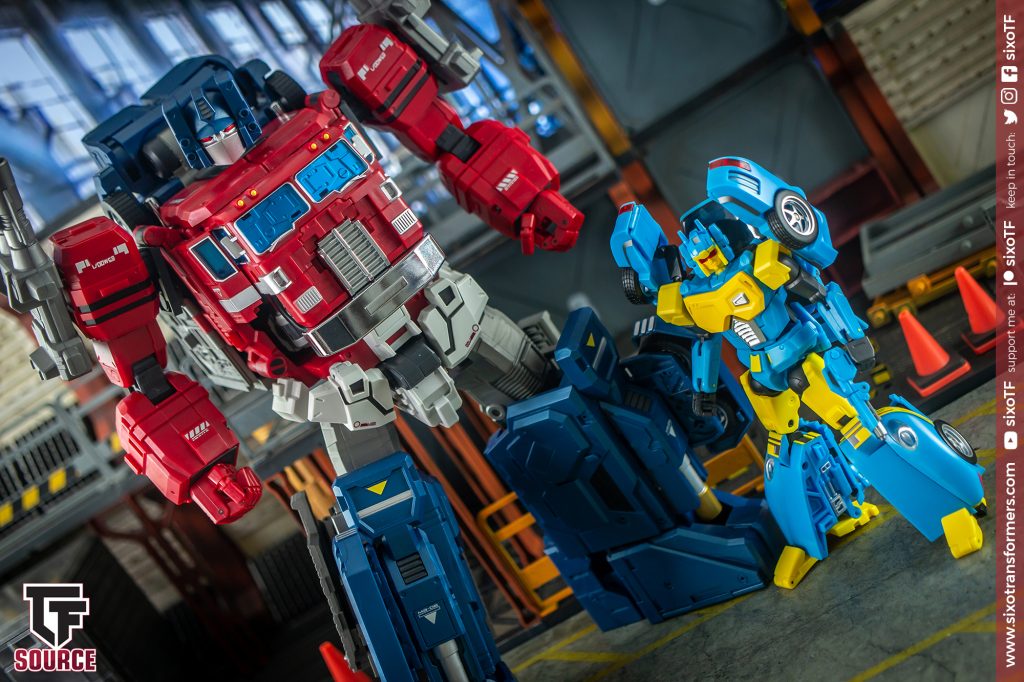 For now though, I guess you’ll have to get creative with where Nite Walker best sits in your collection, as it’s not like we’re neck-deep in Marvel comic-styled MP toys right now, is it? Fans Hobby are doing their bit on that score, at least! 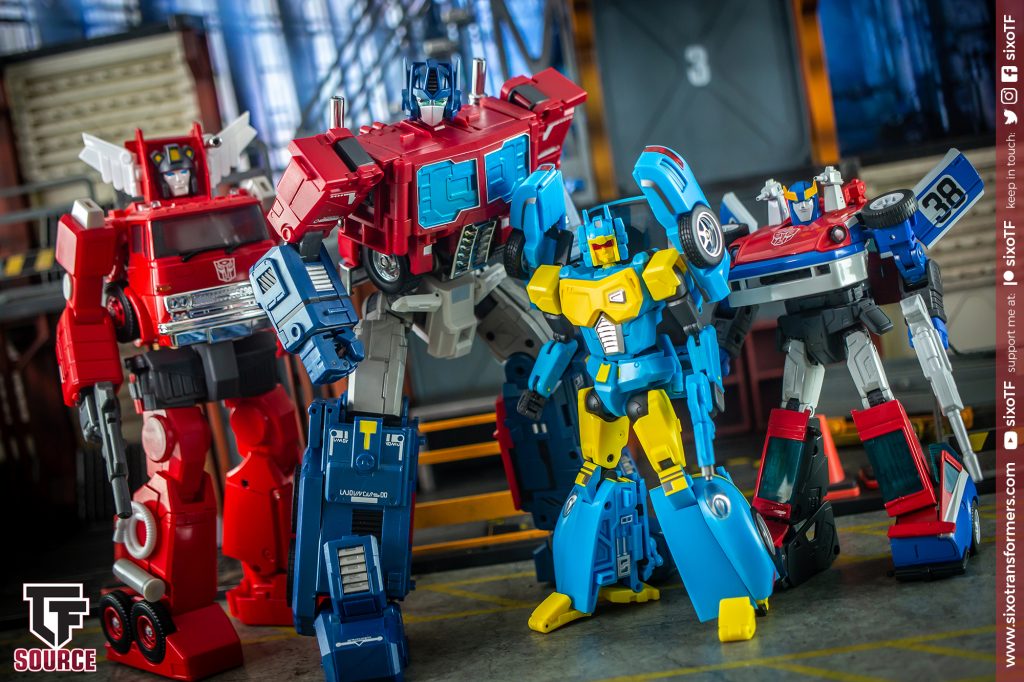 Perhaps it doesn’t really matter though, as it’s still fun to see a new character being brought to life in this manner instead of yet another attempt at the same old territory repeated ad nauseam, especially one that adds a little pop to an Autobot line-up after all! 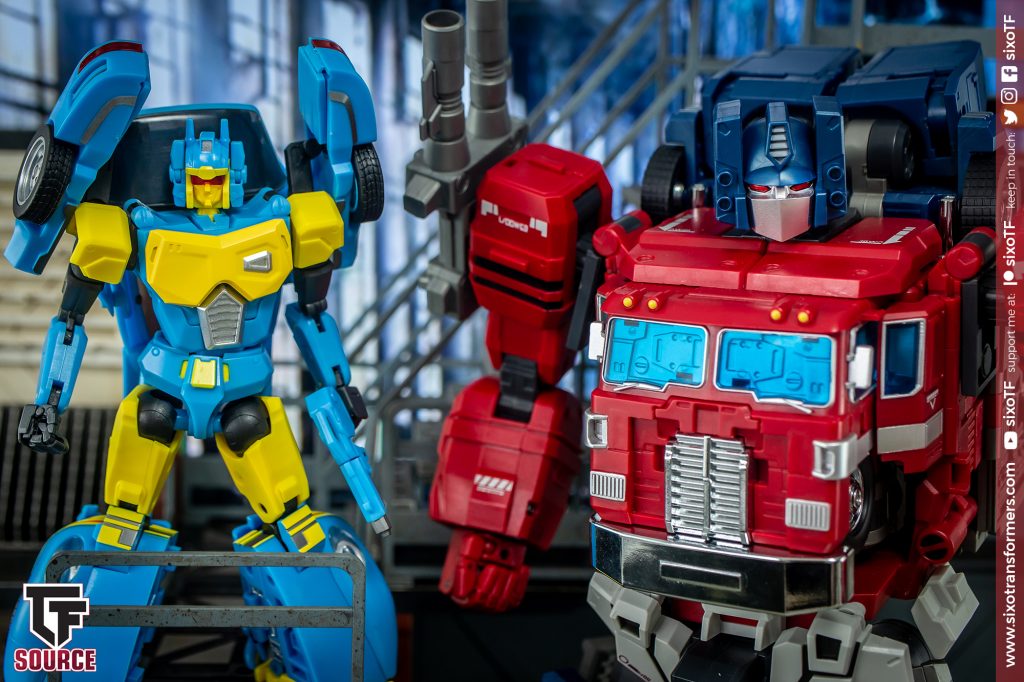 That’s not going to stop me from hoping for more toys along these lines, given how much I love that original printed G1 fiction, but Nite Walker is definitely a big step in the right direction on that path. 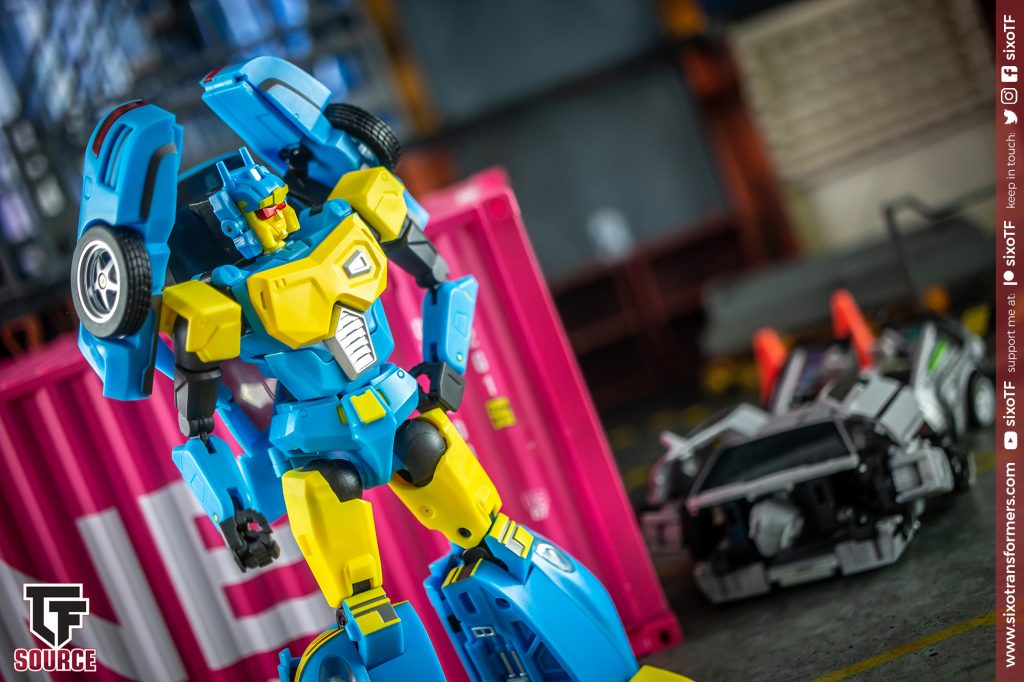 So, after all that, was he worth a look? Mystery solved, I guess.

WHAT’S NOT? Some won’t like the partsforming aspect of the transformation.