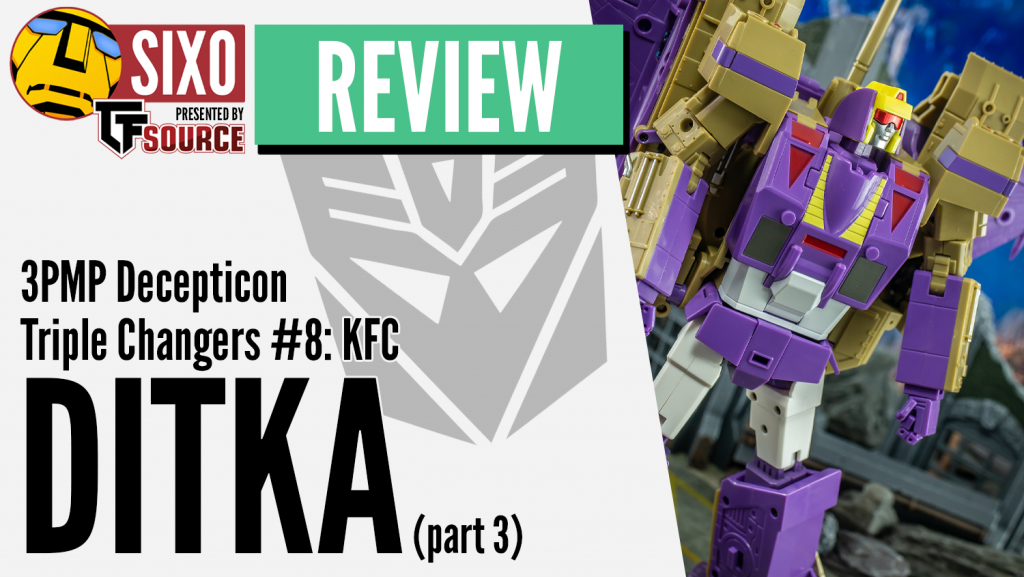 Of all the many weird and wonderful things I volunteer myself for as part of collecting Transformers toys, I don’t think I ever imagined giving something like KFC’s Ditka yet another pass on the reviewing slate. After all, this is my third attempt at assessing this toy, no less, and comes some years after I’ve already made my peace with having the darker-coloured prototype version as part of my collection. 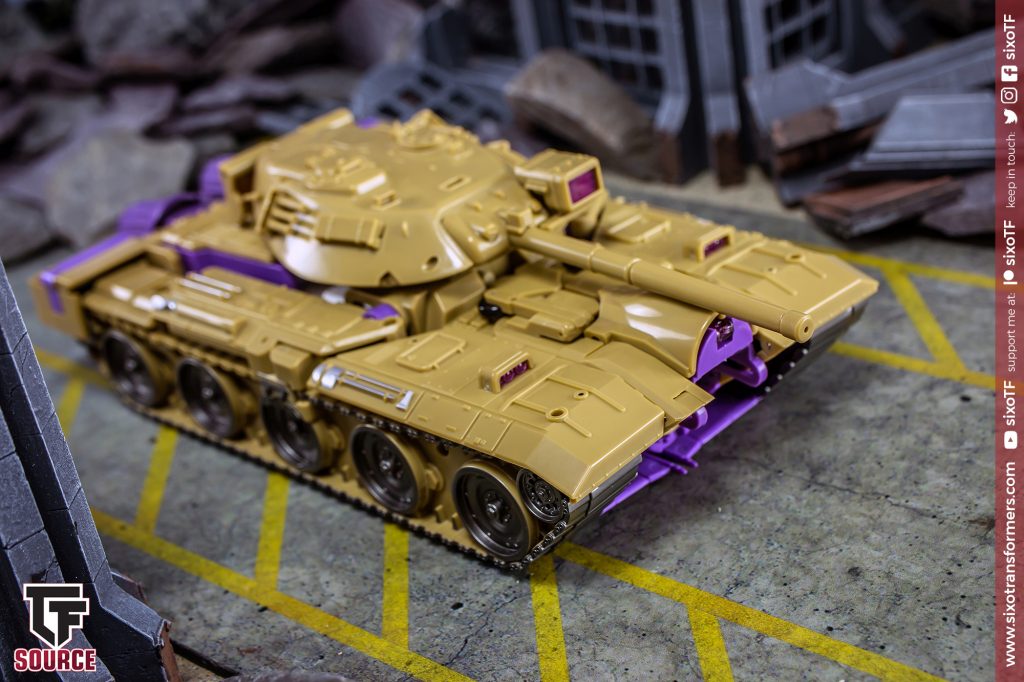 That’s all because when I was originally asked to review a second test shot of the design, now in supposedly more cartoon-accurate colours, it turned out to be a goof. Somehow the new paint job wasn’t the only update it had been through, as despite looking pleasing to the eye, it was suddenly a nightmare to handle. Tolerances were all over the shop and the robot mode could barely stand without flopping over, which was especially strange considering how comparatively solid that first attempt had been! 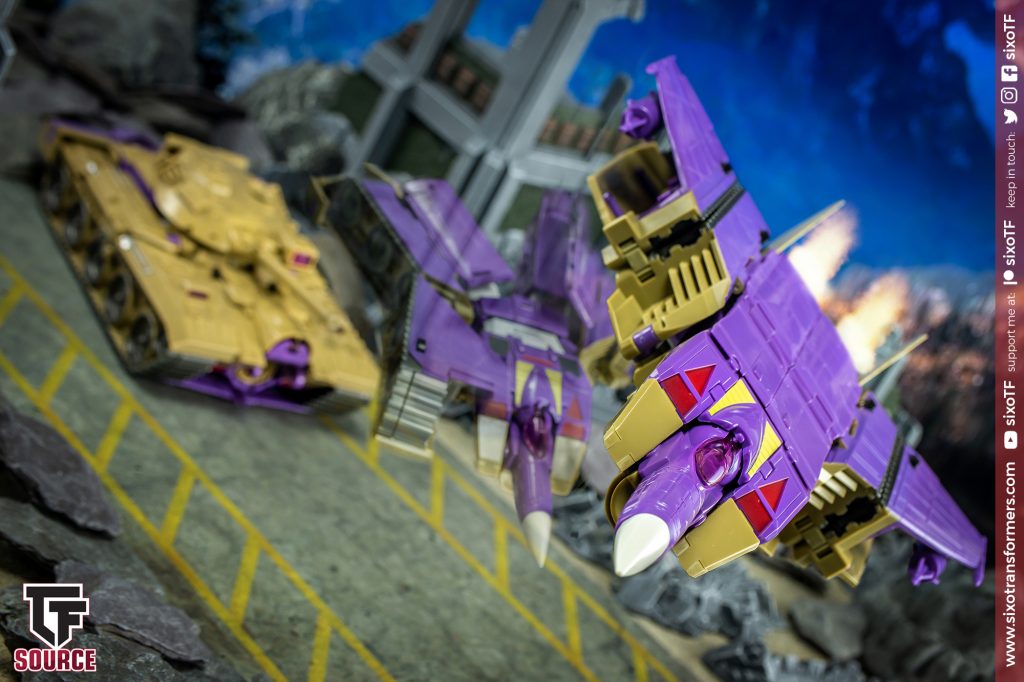 So, with the chance to check out the actual retail release in the offing, I figured why not give it a go, eh? After all, with FansToys Thomas also having not long arrived and now being due for a pictorial perusal, it could be fun to assemble a complete league of 3PMP Decepticon triple changers and assess them as a combined team. What could go wrong? And, for the first two parts of this review, it seemed like that was a relatively good strategy… but unfortunately, this is where things take a bit of a turn. 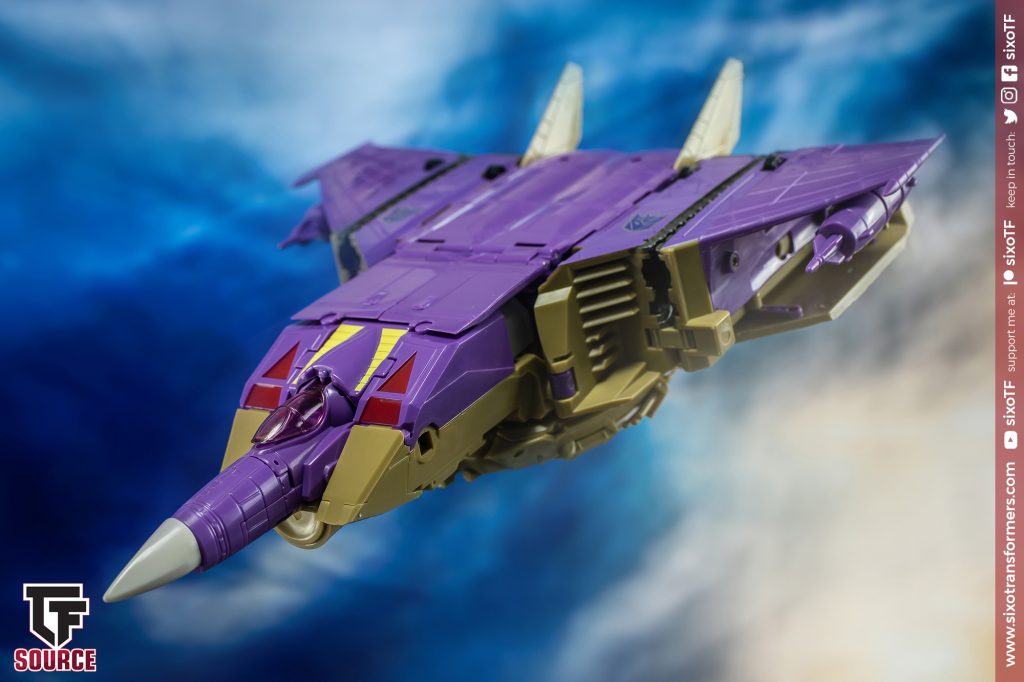 I say that because as soon as I started trying to transform Ditka into his robot mode for the photoshoot, it became quickly apparent that the second test shot I’d previously had in hand was no unhappy accident. All of the flaws I’d previously witnessed are here to see in spades. 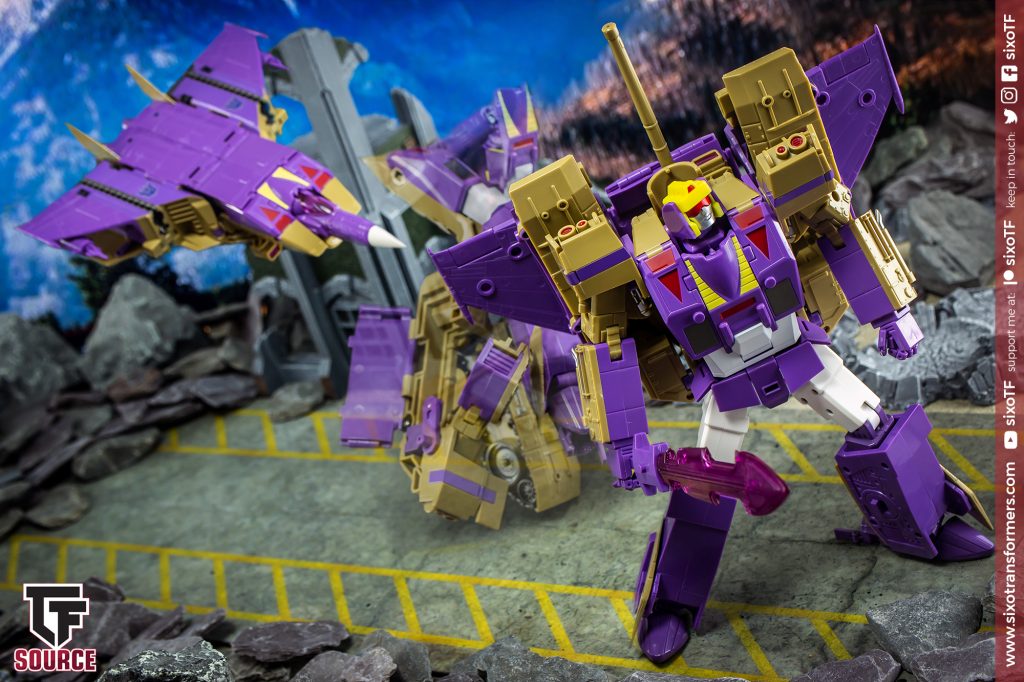 Let’s start with actually assembling the thing into its humanoid form, to begin with. Most bits all tab in very well and at least to begin with, the joints all seem like they’re going to be ok. There are certainly one or two questionable clearances in the backpack, but that aside you could be forgiven that you’re onto a winner here, to begin with anyway. However on my copy, the warning signs were already there when bits started to pop off, the most notable of which, one of the tank treads pieces on the back, required a dab of glue if it was ever going to stay put. Not a great start. 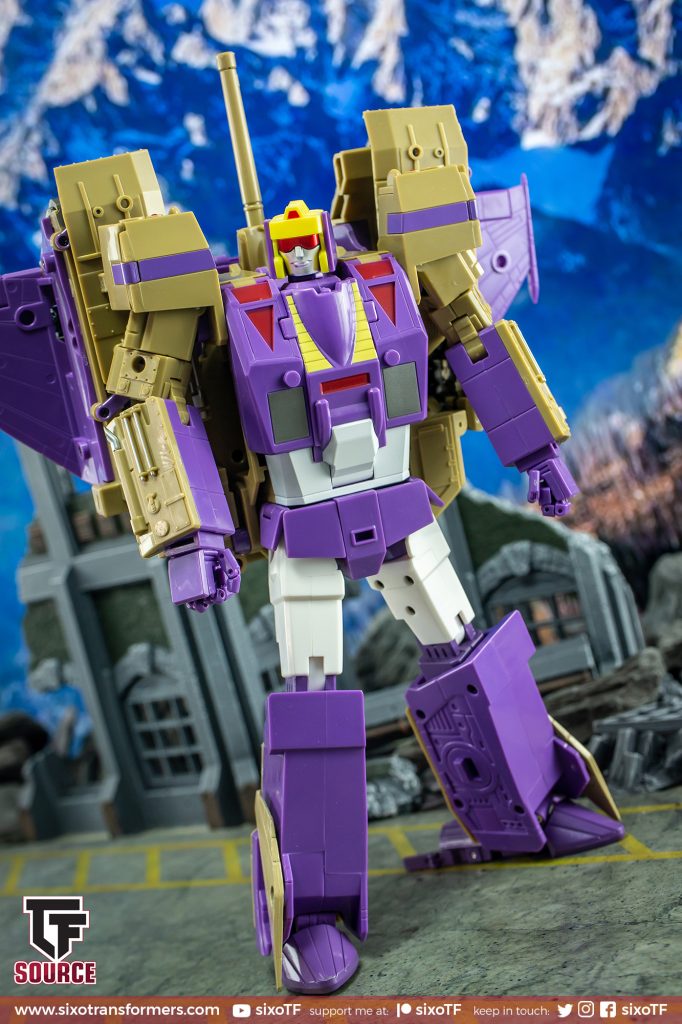 Still, the transformation itself remains exceptionally clever in theory, and to be fair, the result it achieves is very handsome to look at. That is cartoon G1 Bllitzwing to a tee and no mistake! 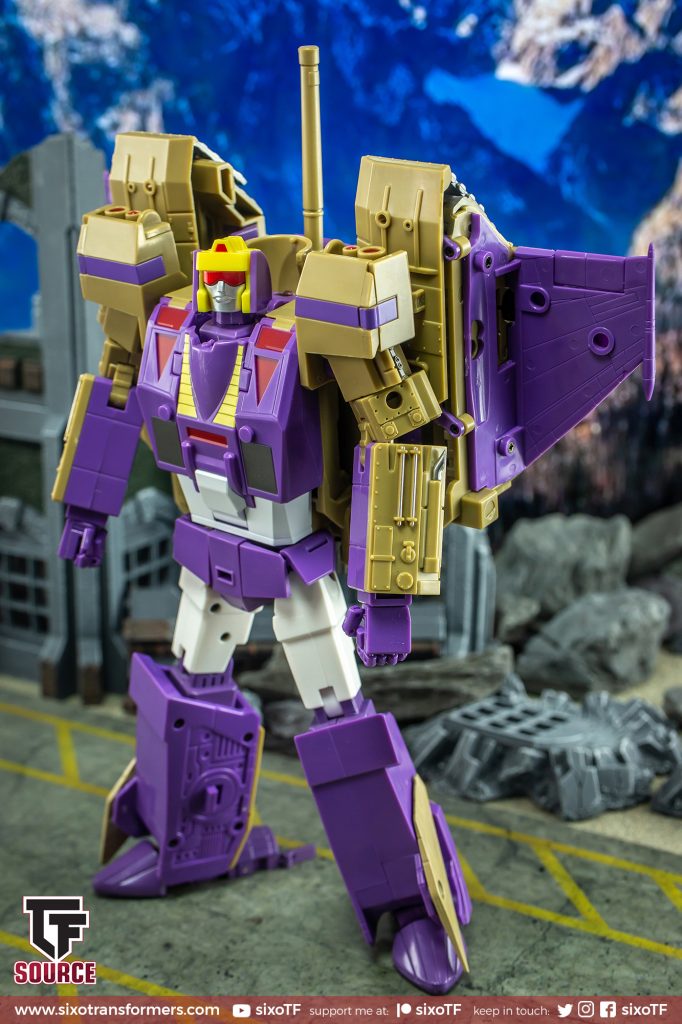 Perhaps that’s why this figure remains such a point of contention for many, as despite all its faults (which we will get to), it remains the single closest thing to recreating the character’s animation model in accurate toy form that we’ve ever seen. The nearest competitor is DX9 Gewalt and, whilst that toy has its supporters, it’s by no means as faithful to the screen look as what we see here. 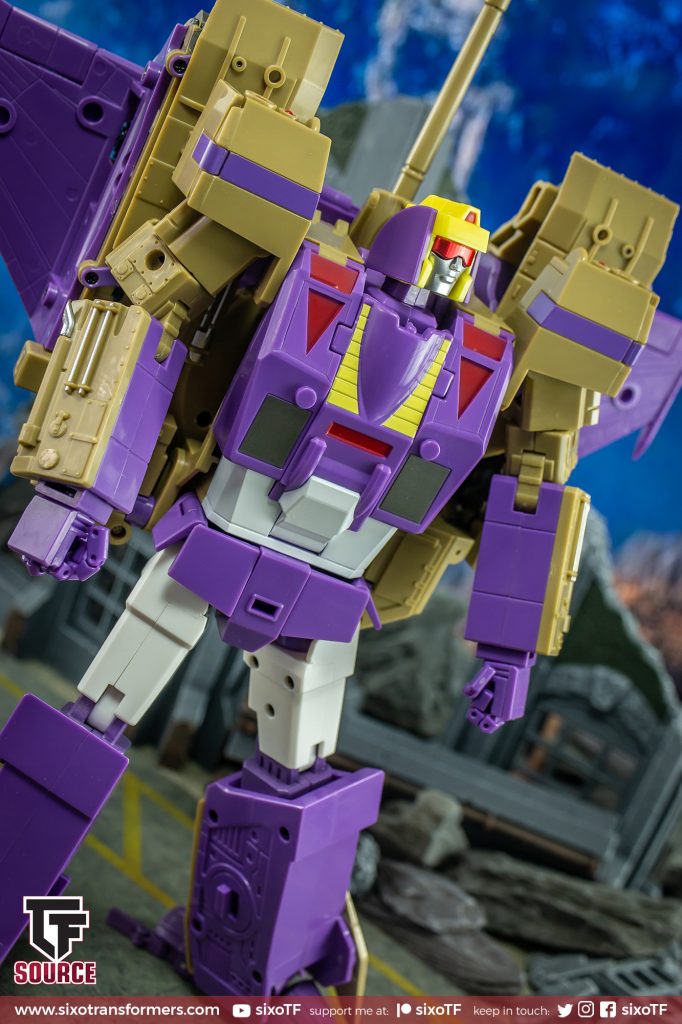 Then of course there’s the fact that FansToys have steadily been teasing their version for what seems like forever now (Berserk at one stage had the infamy of being the longest I’d ever held out waiting for a pre-order to come in, before cancelling at the 18-month mark about three-and-a-half years ago!), with a lot of collectors having naturally lost faith in that ever coming to pass and starting to eye up Ditka at one stage or another. 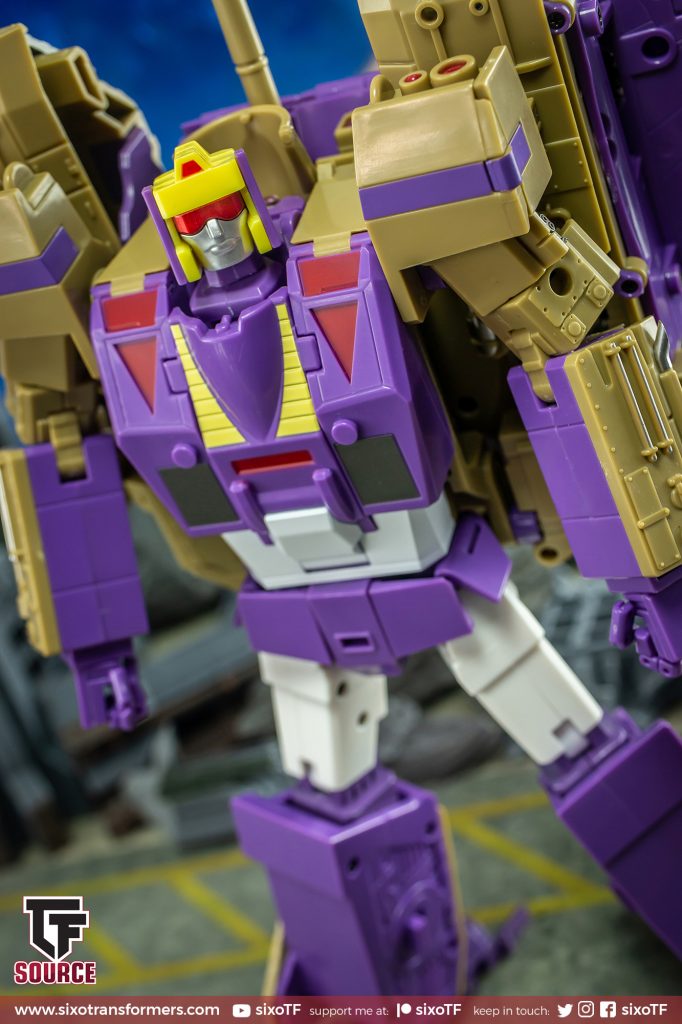 So, as the major go-to in the 3PMP arena, you’d kind of hope that this thing would knock it out of the park, wouldn’t you? Or, at the very least, be a passable representation that can stand stoically on your shelf as a bit of a placeholder, I suppose! Unfortunately, Ditka struggles a little even in that arena. 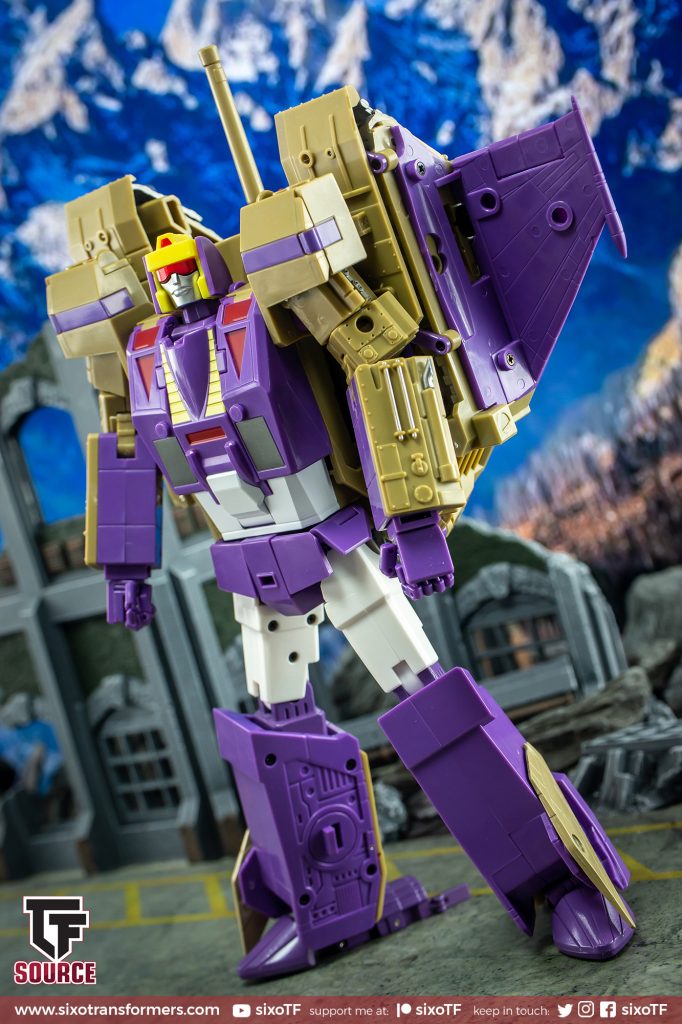 Let’s start with the major reason why and what is still the biggest thing that kills me about this robot form – the feet, or, more specifically the ankles. They’re abominable. 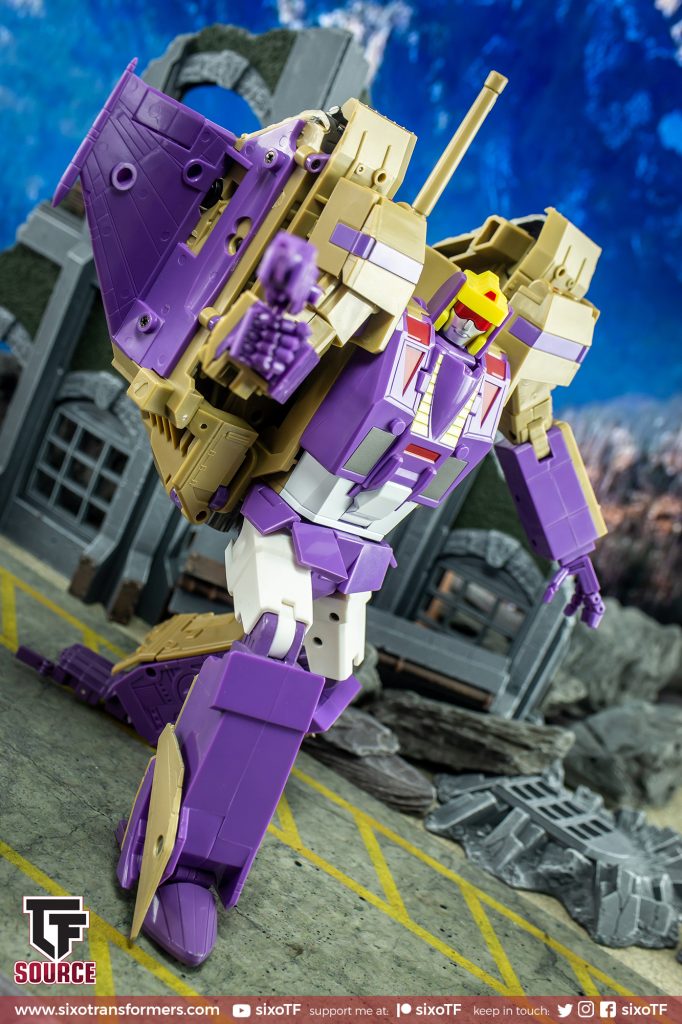 That might sound like a heavy dose of hyperbole on my part, I know. After all, how bad could it be? The toy looks nice, so can the ankles really be such a turn-off? Well yes, and here’s why – you can’t get the flipping thing to stand, at least not without considerable effort and frustration. 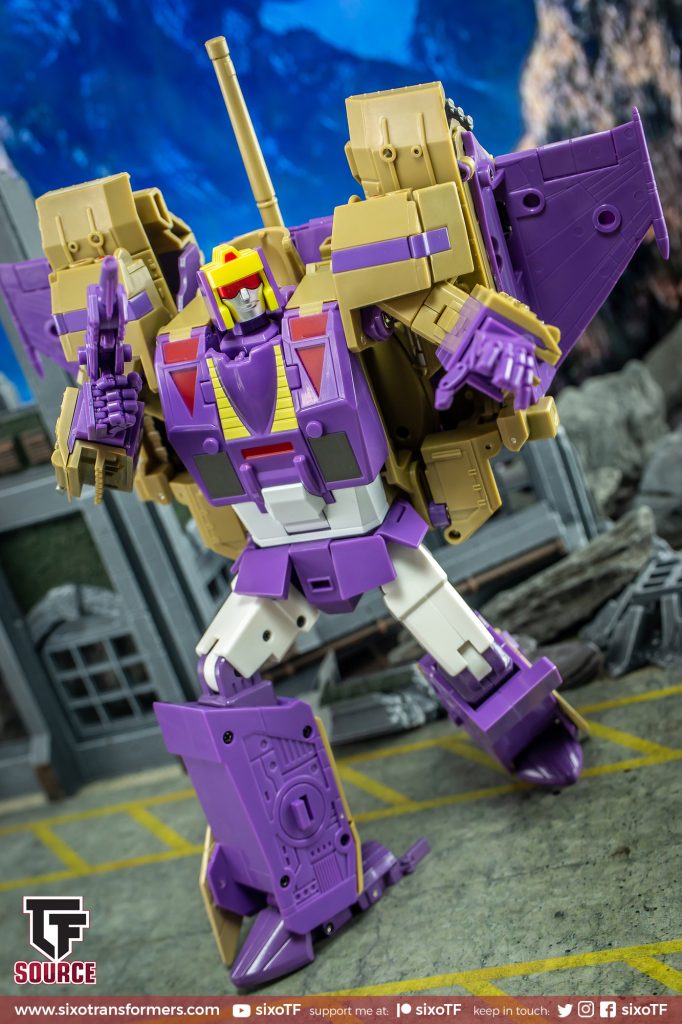 Allow me to elaborate. The joints in the ankles are so useless that they provide precisely zero about of stability whatsoever. It’s not even a problem that affects attempts at more adventurous poses – just trying to position this guy in a normal A-stance is a major pain in the wotsit. He sways back and forth like nobody’s business and feels about as floppy as a hard disk drive from the 1980s as a result. It’s the antithesis of fun. 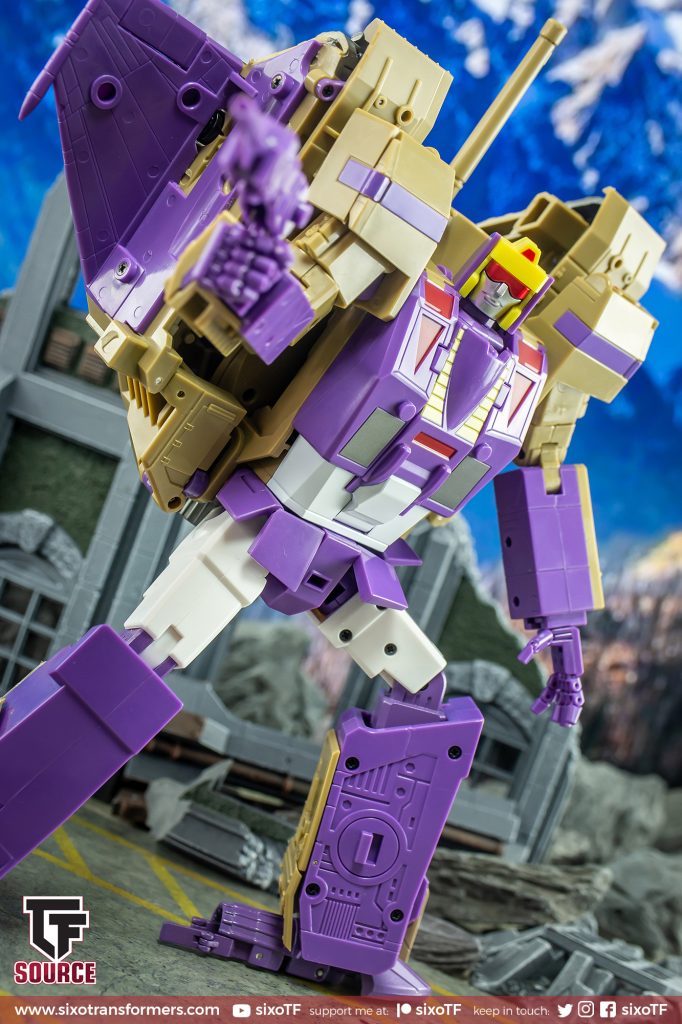 And I know what you may be thinking – I’ve taken some photos here which clearly show him standing at least semi-stably long enough for the shutter to click. Yet what you don’t see is the sheer amount of effort (not to mention sweat and swearing) involved for that to happen. It’s incredible to me that such a clear quality control error can slip through the net, especially when you consider that this isn’t specific to a small number of copies – by all accounts it’s entirely commonplace and seems to be the default experience for people owning the toy. What a shame! 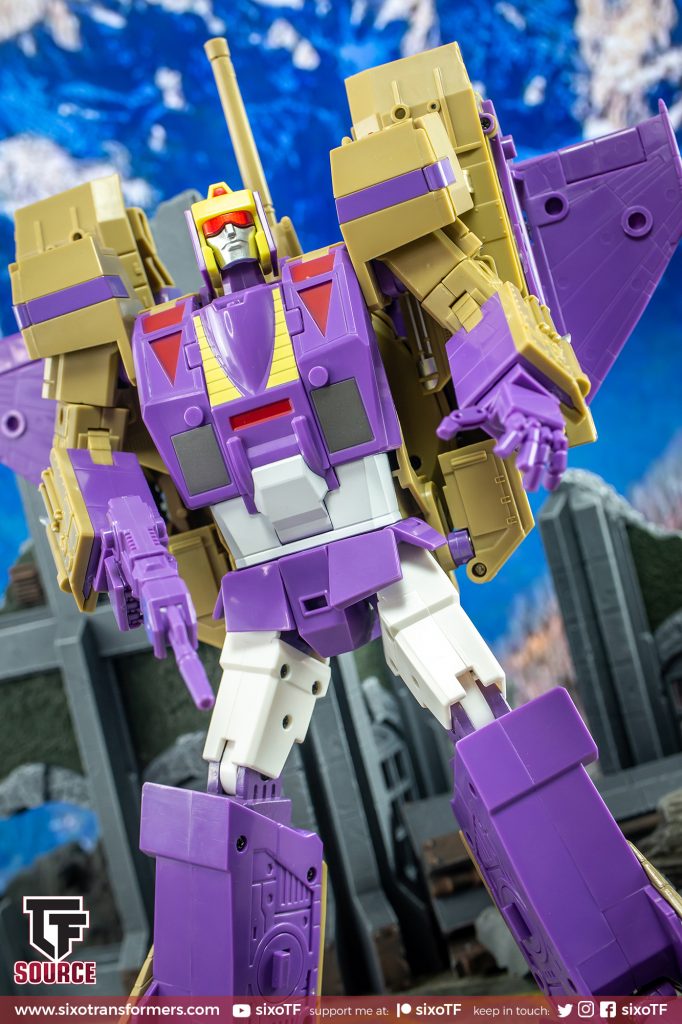 To say it’s a major buzzkill is an understatement, sincerely. I so badly wanted to get on with Ditka (I mean, this is my third pass, so that tells you something!) but the dodgy ankles genuinely make me not want to try and pose him ever again. It’s especially grating when I consider that the problem is just not there on the original test shot! 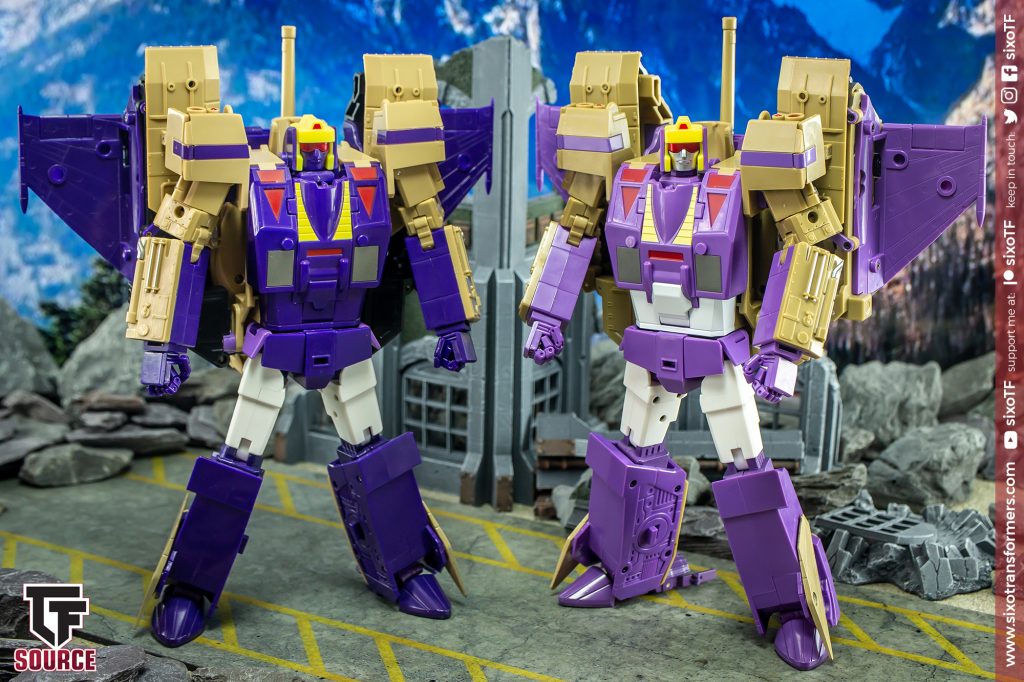 It’s long been confounding to me that KFC somehow managed to take a backwards step with the second test shot of Ditka, although it’s especially disappointing to see all of those problems manifested in the final retail version as well. The original is by no means perfect but at the very least it can stand stably and allows for a better range of motion in other joints to boot. 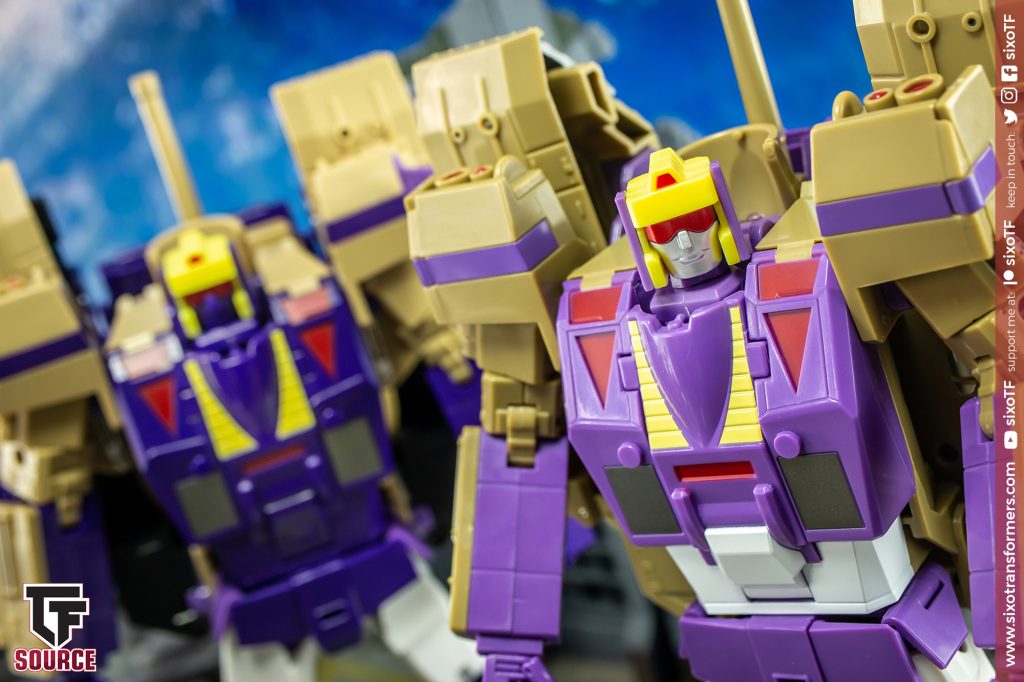 I think if the retail version had the same tolerances, the same joints and the same more solid feel as that original test shot, then Ditka could easily be considered a relative shoo-in as the go-to Blitzwing attempt in a lot of people’s collections. As it is, it feels like a major toss-up to me between wanting the more cartoonish colour scheme and wanting a toy that can actually stand up. 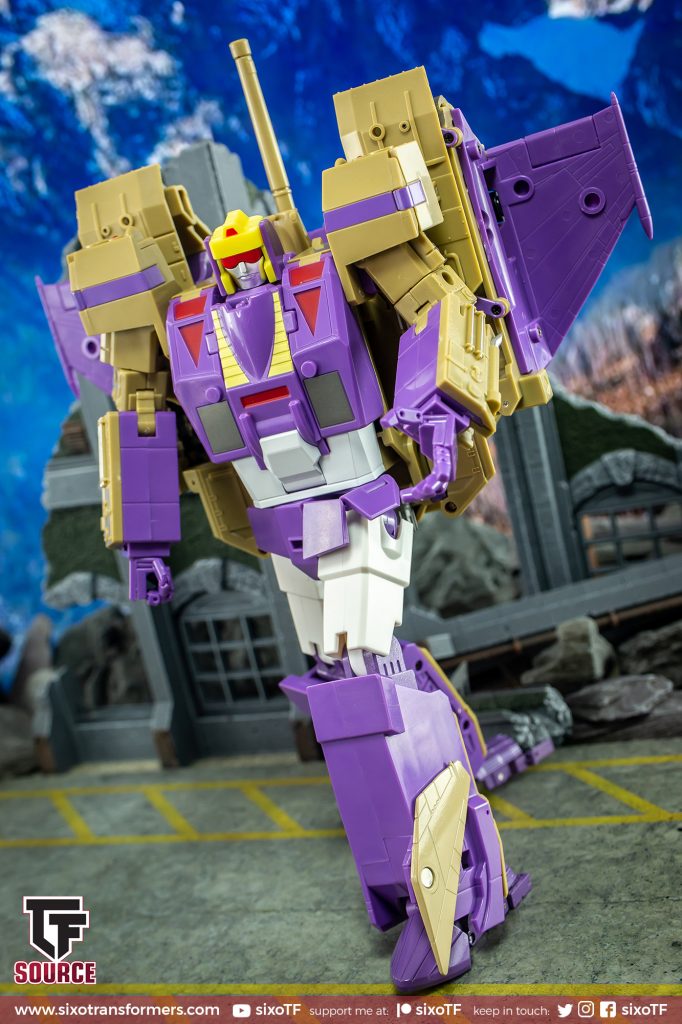 Perhaps the most perplexing bit of all is that KFC has then added additional heel extensions to the revised version, with a little flap that folds out from the thrusters at the back of the feet meant to allow for a spot of extra stability. Unfortunately, it’s completely useless in every respect, as all of the problems are within the ankle joints themselves, and not really as a result of the backpack being so heavy that the toy tends to topple backwards. The test shot copes with it all just fine as the ankles are stable, whereas all the additional heels do here is leave the new Ditka precariously positioned in a 45 degree reverse-Michael Jackson scenario whilst also looking like he’s dragging a bit of old bog roll round after stepping on it during a visit to the little bots’ room. It’s bad, and again not in the way MJ was singing about. 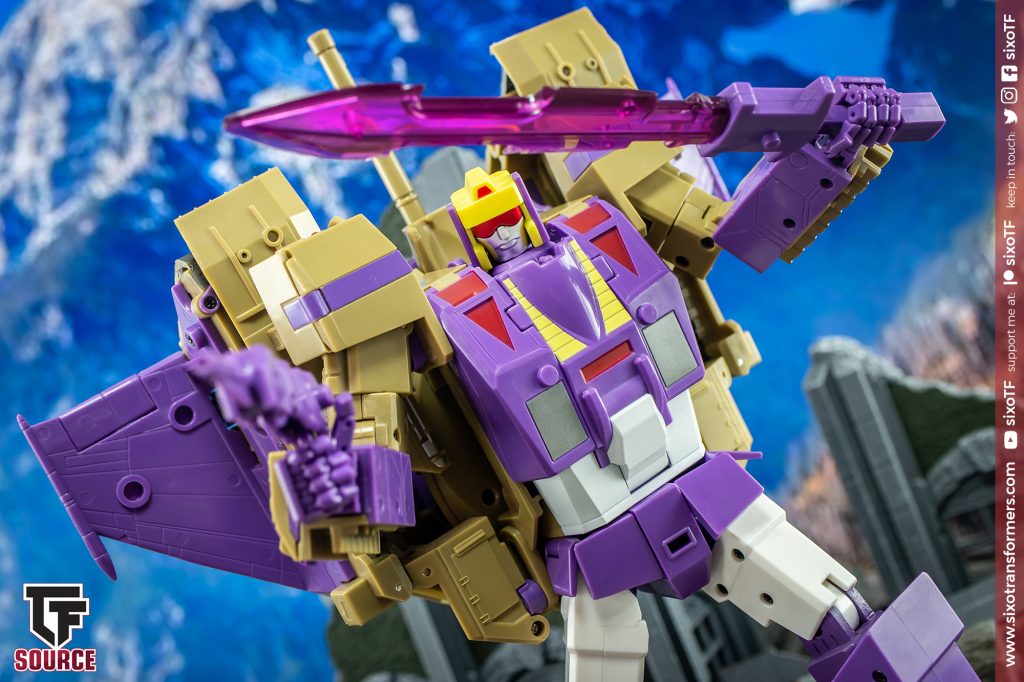 Frustratingly, the whole business with the feet very much overshadows the rest of the experience with this toy, especially given how hard it is to pose in any meaningful manner. 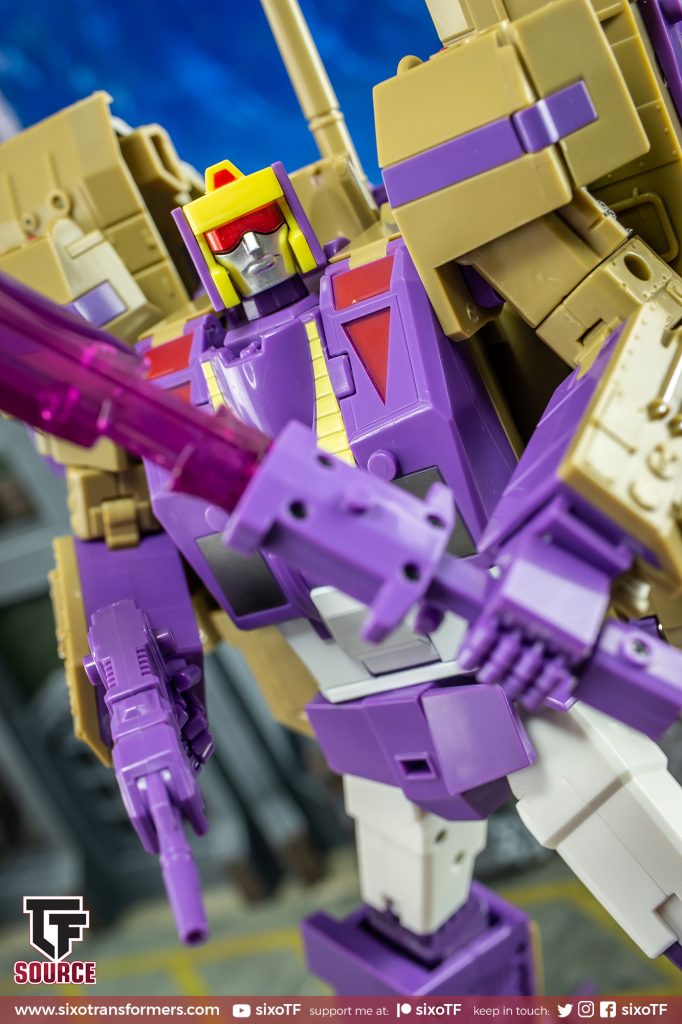 It’s a shame too, as honestly, I do think the look of this guy is spot on. KFC nearly always go good-looking robots, and Ditka is certainly no exception. He’s cartoon-accurate to a heavy degree and certainly evokes the feel of the character from the screen, too. I really like the face sculpt and if the build was indeed up to snuff I’d probably have no problem leaving him on my shelf in place of the character for the foreseeable future. 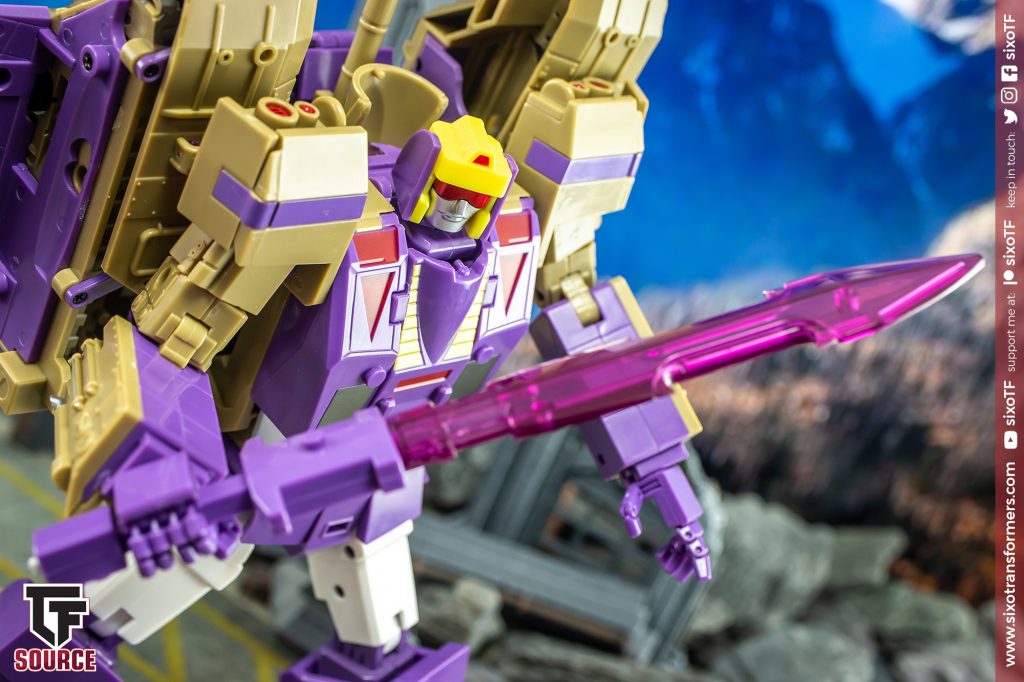 That’s not to say there aren’t a few other quirks to him, mind – I’m not a major fan of how the arms cannot move backwards at all, on account of the position of the backpack, and I still find those hands way too fiddly for my tastes – but on the whole, the look and feel of him are strong enough to be considered “a good job”. 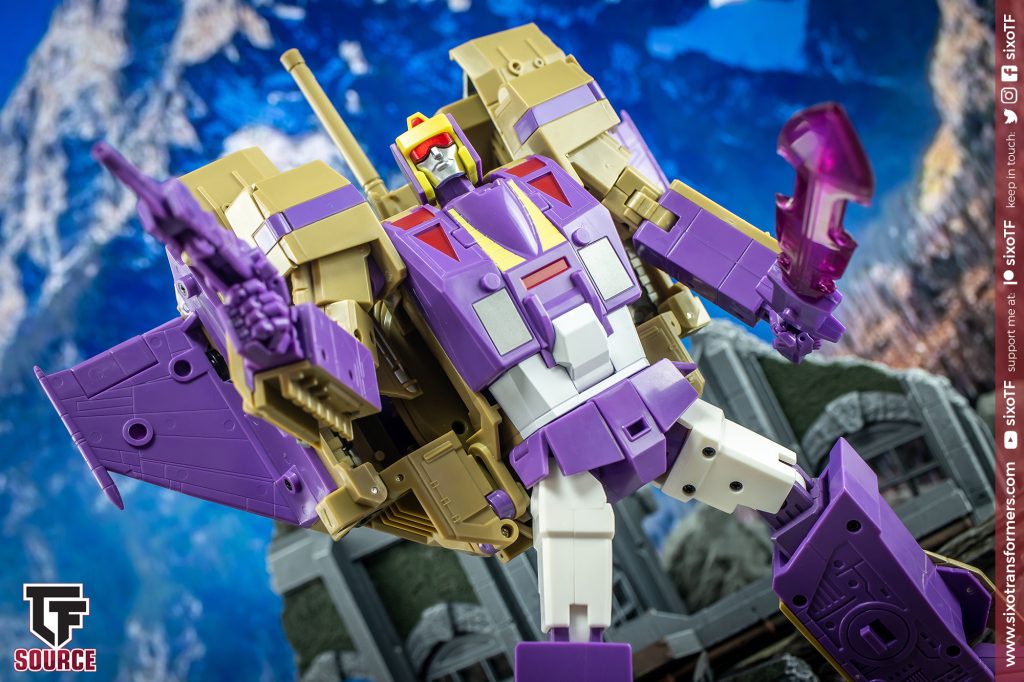 Ultimately though, it’s all a bit undone by those dodgy ankles, and so much so that I’d have to stop short of saying I think it’s something I can live with. The level of frustration involved with just trying to pose him might be too much of a turn-off, I fear. 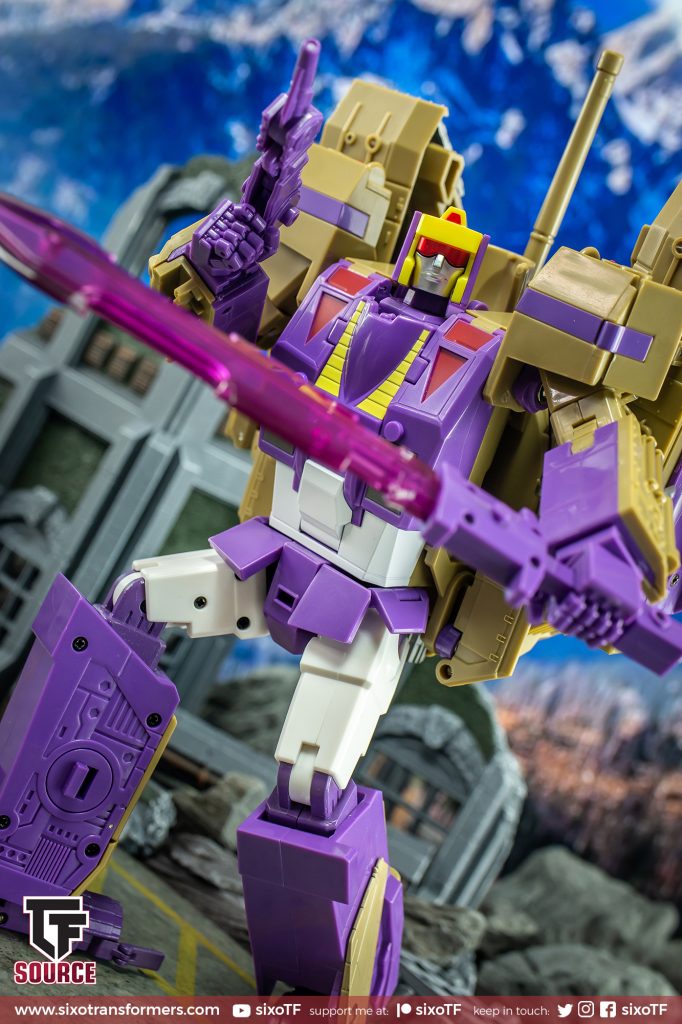 If you can get past all of that then he does have some neat accessories though. There’s a light-up sword and gun, both of which ably recall his weapons from the cartoon, and there’s even an additional head to give him more of a TF: Animated appearance (even if that does really feel like a reference from yesteryear nowadays!). 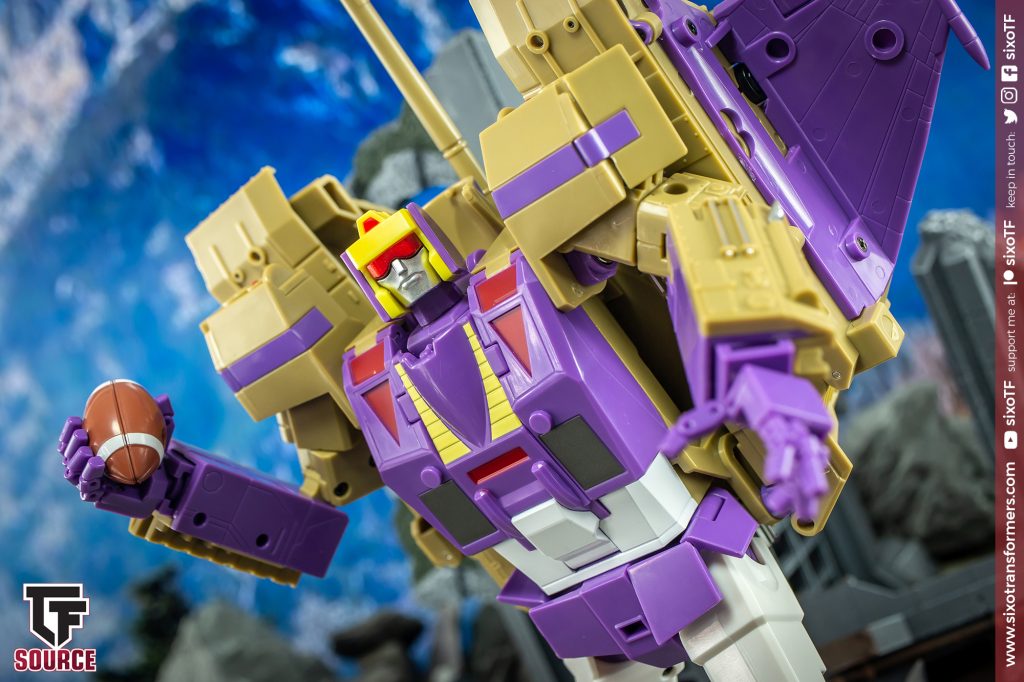 There’s even stuff like the football Blitzwing has a go with in the classic episode, Triple Takeover, so there’s more than enough to give you a bit of a laugh along the way. 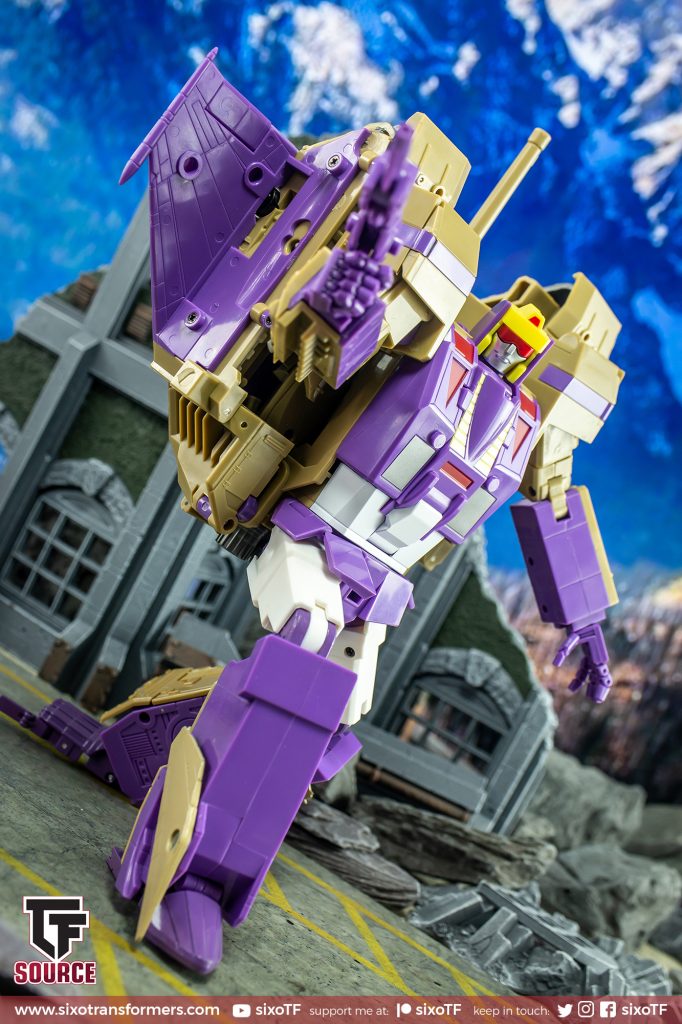 Really though, it’s not enough to take one’s mind off the problems below the waist, and as much as I hate to sound like a broken record, that really is going to be the biggest consideration when eyeing up this lad for your shelf. 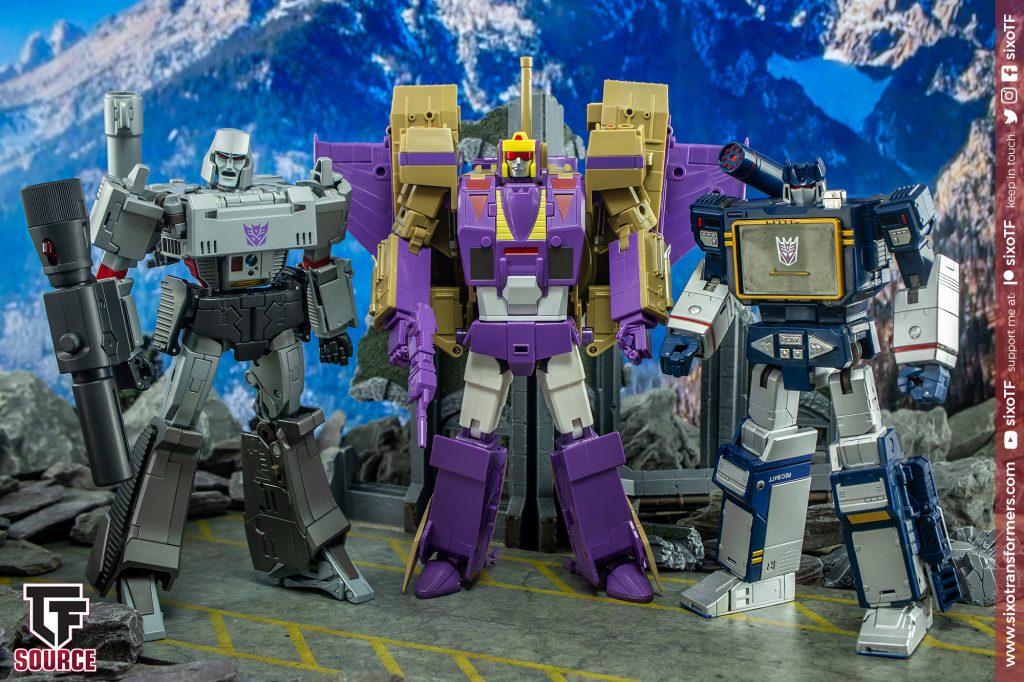 The real truth is that he does make for such a fitting stand-in alongside any number of other MP-styled Decepticons, that it’s so disappointing to have such issues. He gels pretty perfectly with official toys such as Megatron and Soundwave and definitely brings the right vibe for the character. 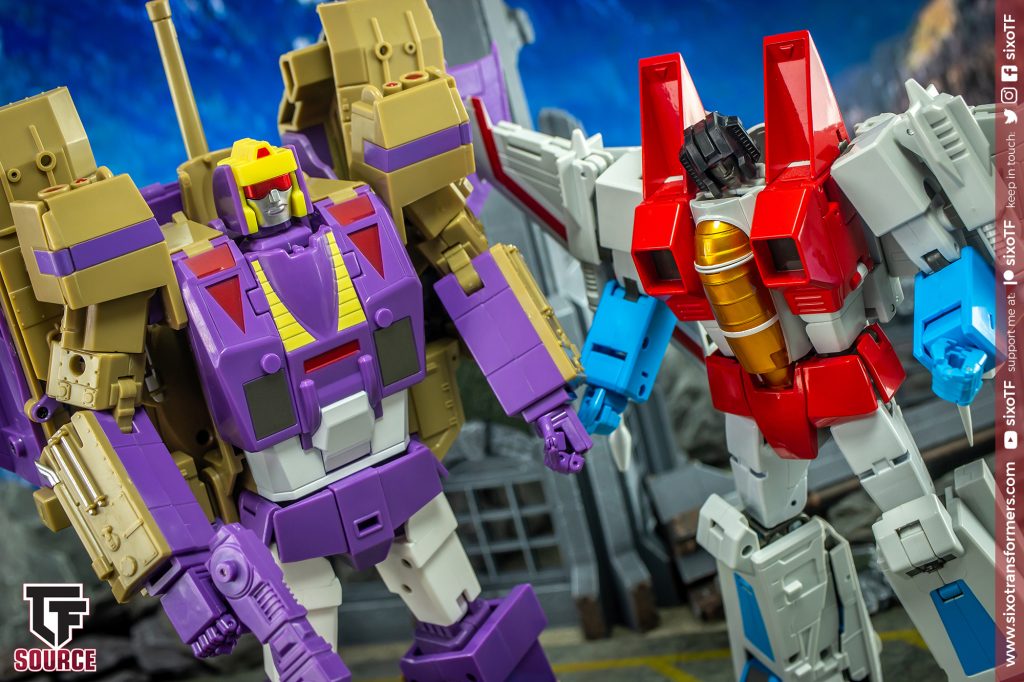 I’ve even become entirely accustomed to the darker tan colour of the retail version, and I have to say it’s more than compensated for by the vibrant other colours on display here. If I could have this version with the stability of the test shot, I’d be a happy camper! 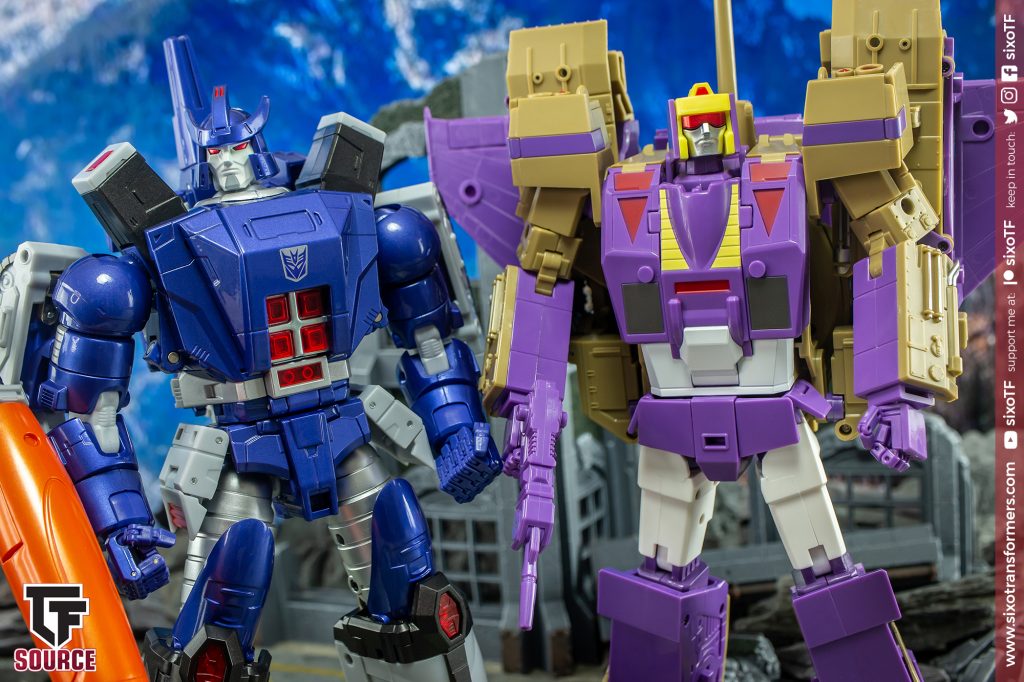 Failing that being available, perhaps it really will be a case of continuing to wait for FansToys to finally enter the fray, after all. I mean, how much longer is it likely to be? Perhaps it’s best not to contemplate… 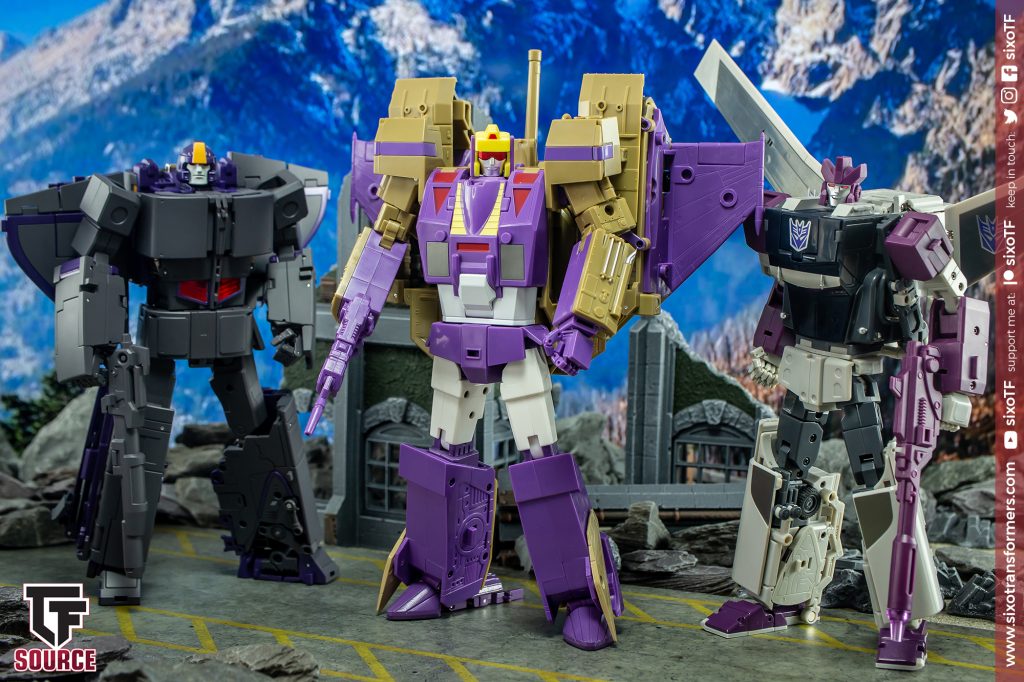 For now, at least Ditka fills the spot in our 3PMP Decepticon triple changer roster. He may be far from perfect but as I say, there’s little doubt that KFC got the look on point! 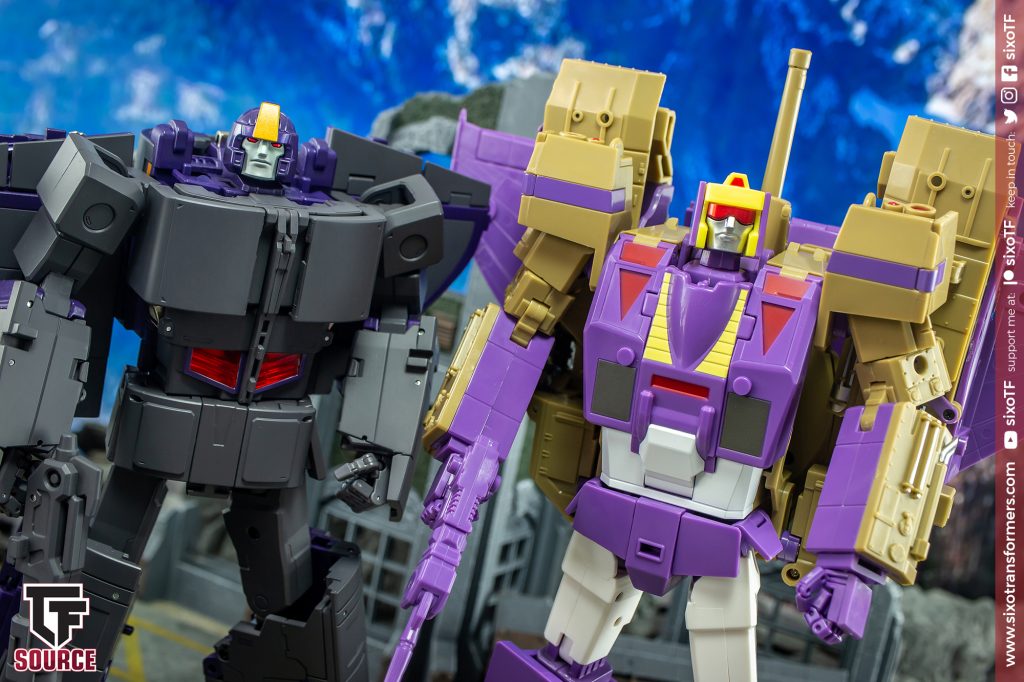 Even just seeing him and FansToys Thomas together, it’s amazing to me how well they click in terms of design and style in a lot of regards. As a big fan of the episode they share together, it’s a fun sight to behold despite all the issues with getting there! 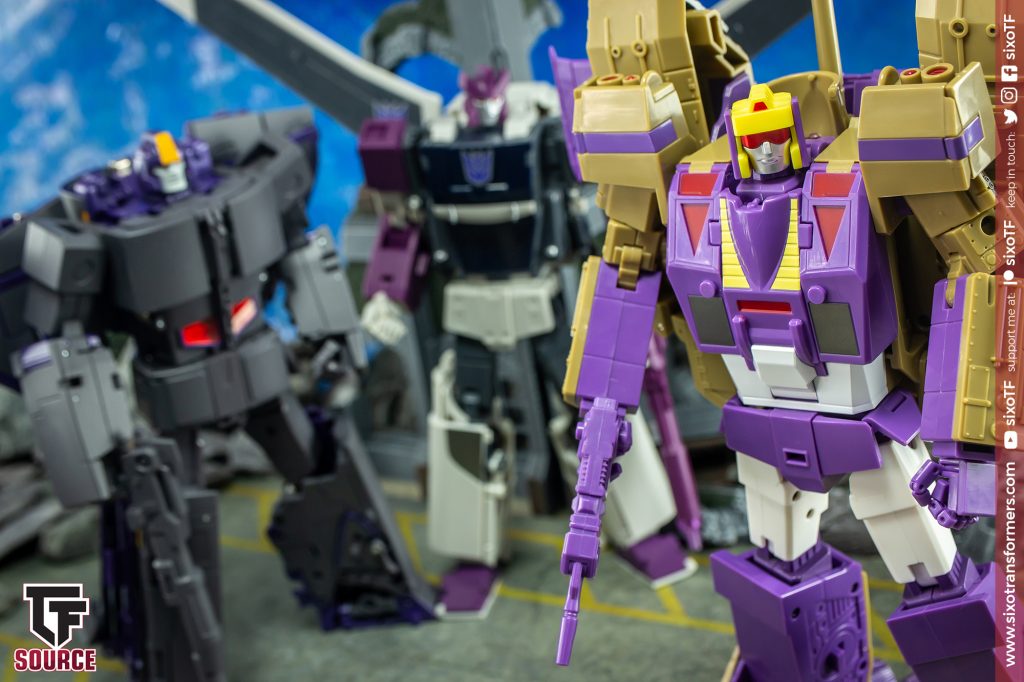 Ultimately though, Ditka remains more a point of “what could have been” as far as my estimation goes. I was really hoping that the problems with the feet weren’t going to be so bad on the final version but it looks like that was just a step too far.

WHAT’S HOT? Fab tank mode, interesting transformation and a great look to the robot mode on the whole.

WHAT’S NOT? The jet mode is a bit of an oddity but really, this is all about those ANKLES.