COUNTDOWN: 6 things to know about those new Masterpiece reveals 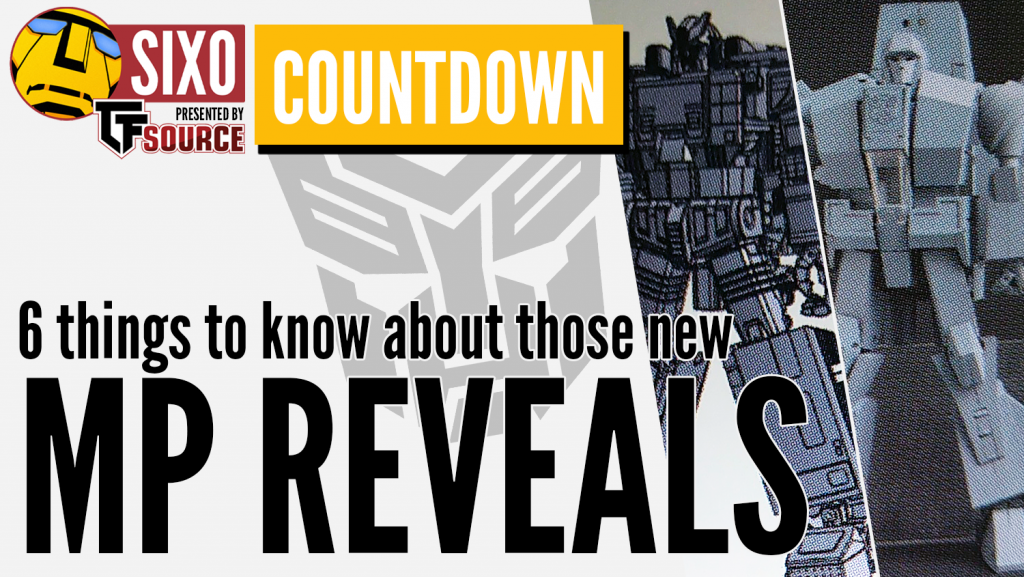 Who doesn’t love a good Transformers Masterpiece reveal, eh? Whether you collect the toyline or not, there’s always plenty to chew over, and this week we were treated to not just one, but two of them! 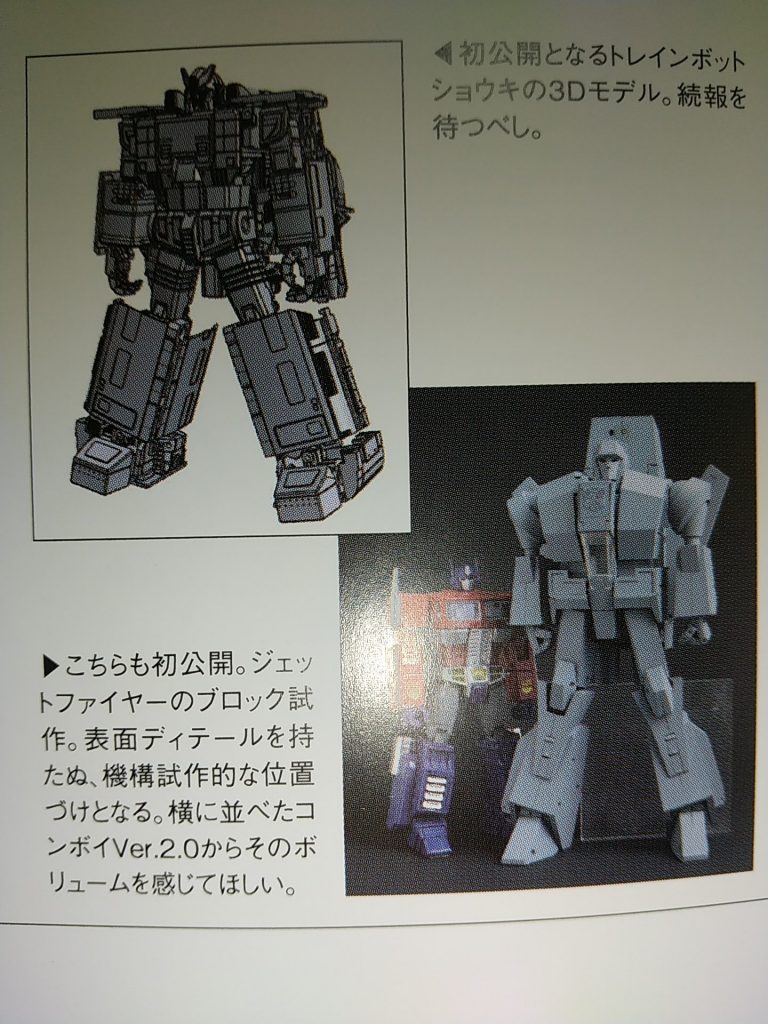 Thanks to the new Generations 2021 book, we have our first look at both Masterpiece Shouki, who is part of the Raiden combiner team that was announced in 2019 (that we discussed in a previous article, here), and Masterpiece Skyfire! They’re both in the early stages, quite clearly, but that doesn’t mean there isn’t plenty to discuss already. So here are 6 things to know about these exciting new toys!

#6: The Skyfire reveal is an early, unfinished prototype 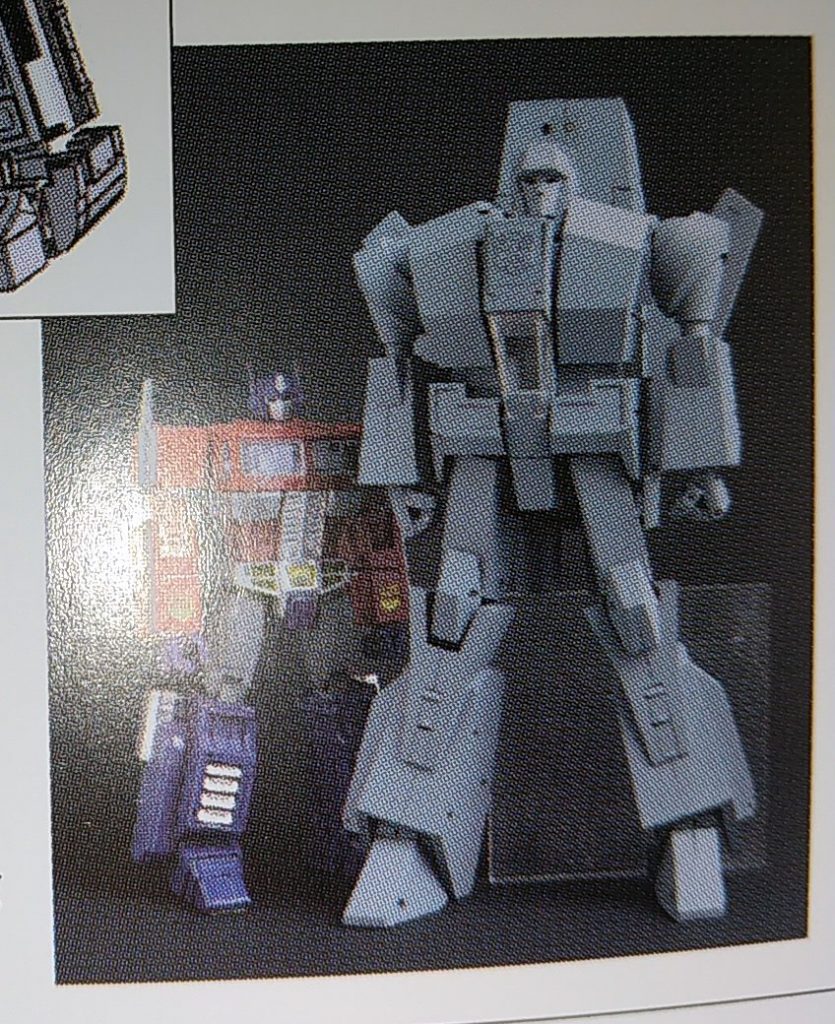 The first thing to note about Skyfire is that this is very evidently not a finished toy. If you look closely then you’ll note it’s a “block” prototype, used more as an early proof of concept in the design process than anything. It’s missing lots of the finer details that will be apparent on the final figure, including elements such as the vents that will presumably be on his chest, and it’s possible that the model in this photo doesn’t even transform. Still, it’s a fascinating first look and a welcome peek behind the curtain, even if it does make for a rather bizarre choice for a first reveal! We did however see a similar block prototype of the upcoming MP-52 Starscream prior to that being eventually revealed in full, so hopefully collectors won’t judge the detail of what they’re seeing here too harshly without taking that into context.

It’s also curious to see this prototype pictured with MP-10 Convoy (as opposed to the character’s MP-44 update), which implies that this is likely an older photo and therefore a design that TakaraTomy have had in development for some time. We first heard that it was potentially on the way in an announcement in March, so here’s hoping we get more very soon! 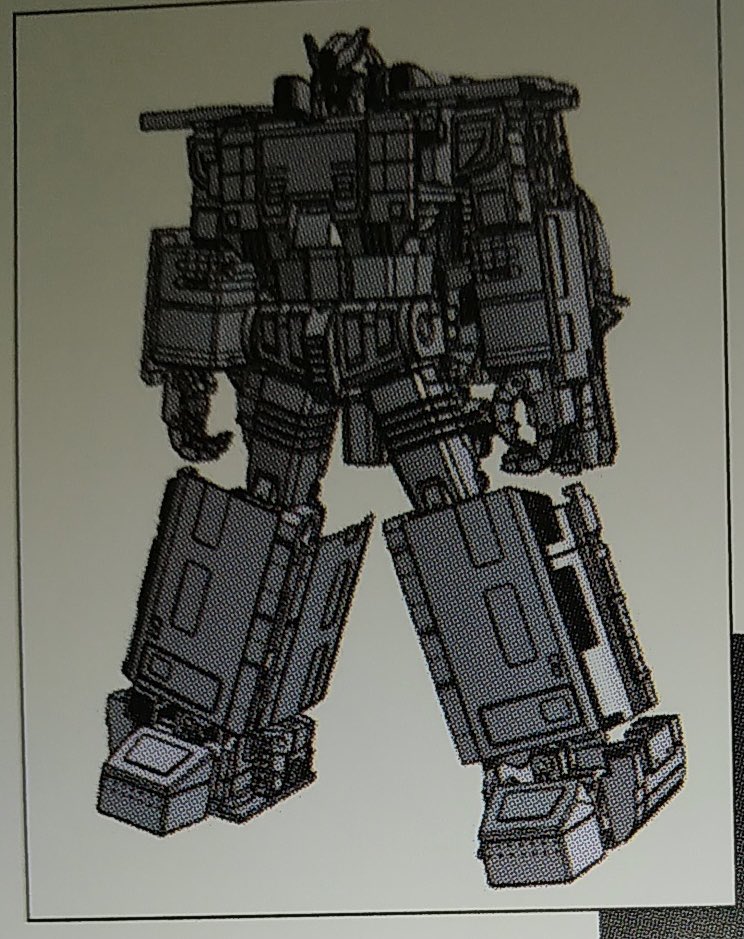 Though not evident from the actual reveal itself, it’s still interesting to note the previous information we’ve heard about the scale of the new Raiden release, as it’s already been suggested that it could be a similar size to the combiner teams we saw as part of the Unite Warriors line. This was hinted at back in March in that same announcement as Skyfire, although the details were a little unclear, to say the least!

For one thing, it’s not exactly confirmed that the scale talk was referring to the Raiden team (though it would make sense in context) and even then, it didn’t elaborate on whether it meant the full thing would be a similar size to the smaller toys from Unite Warriors, such as Menasor or Superion, or indeed the larger, 18-inch Devastator. Odds are it’s the latter though, which points to Raiden standing at a similar height and therefore potentially being able to work across Masterpiece and Generations lines alike. Could this also mean that TakaraTomy intends for UW Devastator to be seen as a sort-of Masterpiece stand-in? I guess we will have to see how the new toy is marketed, as that might give us our answer! Take all of this with a pinch of salt for now, mind you.

#4: Skyfire appears to be quite cartoon accurate 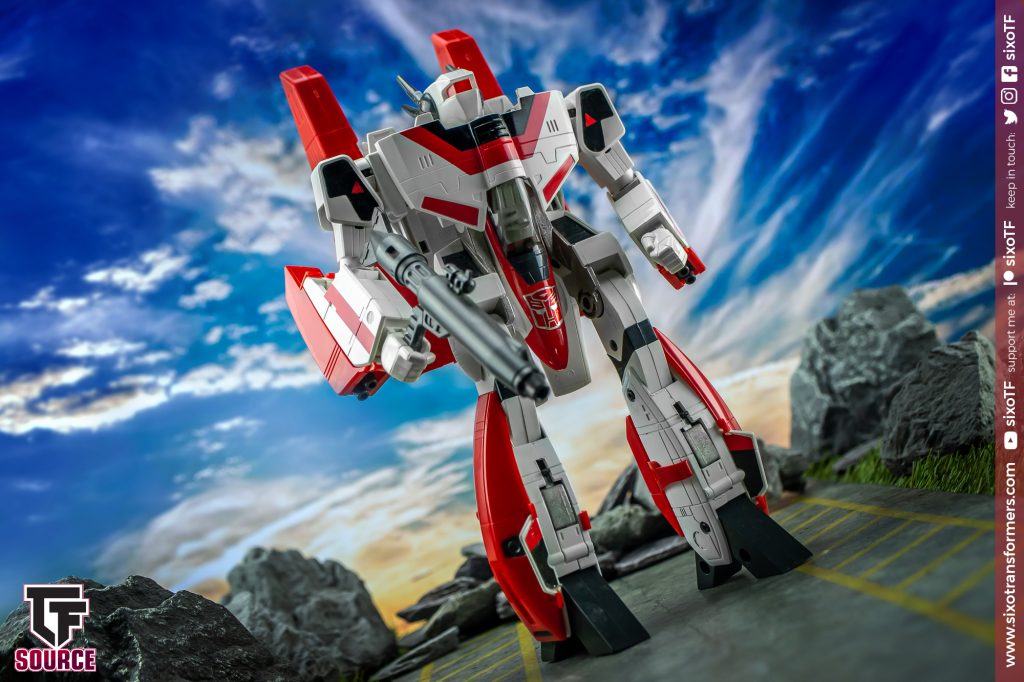 Few Generation 1 toys come with such legendary status as 1985’s Jetfire, not least because of its origins as the VF-1S Super Valkyrie design from Takatoku’s 1/55 line in support of Super Dimension Fortress Macross. We’ve already covered off all of the detail behind the convoluted saga that followed in a previous article, but the TL;DR version is that the character ended up being hugely overhauled for use in the Transformers media from the time, and was even re-named as Skyfire for his cartoon and comic appearances. 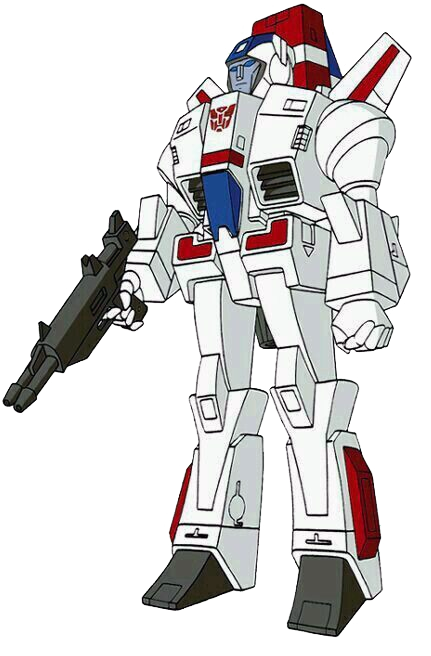 It is of course this take that is the inspiration for the new Masterpiece figure, with the design seemingly flying close to the on-screen appearance shown here. I’m sure some fans will be disappointed not to see elements from the original toy included (even if it’s hard to know how that could be achieved!) although we still have to wait on the toy’s final appearance before knowing to what extent the animation look will be adhered to and therefore being able to judge the aesthetic on offer. Will it swing into the slavish cartoony style of releases such as MP-39 Sunstreaker? Time will tell.

#3: Shouki appears to be a blended design, similar to Skids 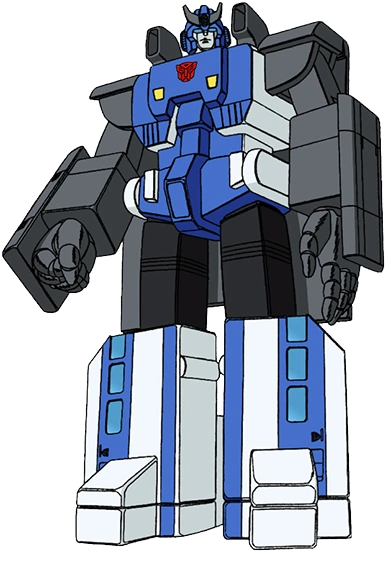 In the case of Shouki, it seems as though the aesthetic will be a little different, however. It’s again very hard to judge from the design drawing that we’ve been treated to, but it does appear to be a bit of a departure from the character’s animation appearance (as part of the Japanese Headmasters cartoon) in a few respects. For one thing, there’s a lot of extra detail quite evident all over the design, even taking into account the ‘busy’ nature of these sorts of renders. It’s early days, but at least on first impression it appears to be a world away from the heavy cartoon style of more recent Masterpiece toys, and perhaps even represents something more in line with the newly-revealed MP Skids. 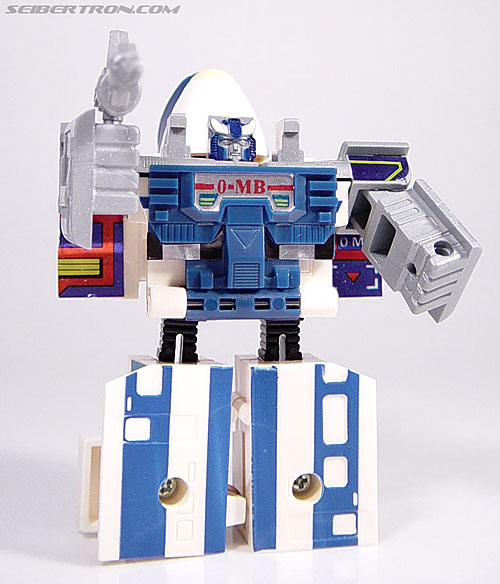 We’ve already heard talk about how Skids is a kind-of ‘hybrid’ Masterpiece design (something we discussed here), mostly on account of the car mode being prioritised as a tie-in with Honda City’s 40th anniversary. It seems that there might be something similar going on with the Raiden team too, especially with how popular trains are in this toy’s native Japan, so perhaps we can expect to see some elements from the original Shouki toy blended into the mix. Can’t wait to find out!

#2: Skyfire looks to be roughly the same height as FansToys Phoenix

Interesting to see that the new Masterpiece Skyfire appears to be a similar height to FansToys Phoenix – possibly even a tiny smidge bigger, it’s hard to say. Can’t wait to see how it develops. pic.twitter.com/YczCy5viE1

One thing I was interested to see was that the new MP Skyfire prototype looks to be very close in size to FansToys’ Phoenix figure from a few years back. Even just comparing photos of the designs stood next to MP-10 Convoy, it becomes quite apparent that both toys have interpreted the character’s ‘correct’ height in the same fashion, meaning that’s at least one way in which the official release will directly compete against the already-popular third party effort. I’m a huge fan of Phoenix myself so it’ll be great to find out what else TakaraTomy cook up to encourage collectors to choose their version, although I’m guessing it may prove superior in terms of articulation at least.

Seen a few people speculating the MP will be a similar size to Siege Jetfire as well and there’s no way.

Of course, a lot of fans have also been loving the recently-released Siege Jetfire toy – in fact, just go ahead and try and find someone who’ll say a bad word about it! In any case, the new Masterpiece release will definitely be a lot larger than its Generations equivalent, but who’s to say that will be enough to convince collectors that they need both?

#1: There’s no word yet on if Shouki will be a separate release to the rest of the team 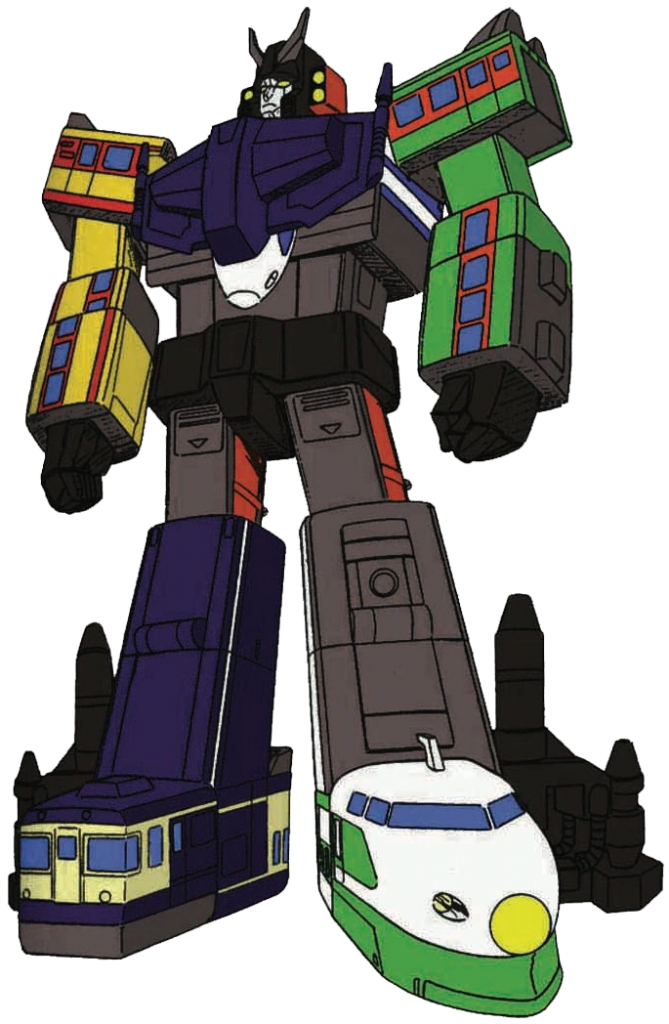 And finally, one thing that is important to note about the Shouki reveal is perhaps what it doesn’t confirm for us – the status of the rest of the Raiden team. We’ve been waiting for news on this release with bated breath for almost 18 months now, especially as its the first Masterpiece combiner team, but at least hearing about one of the six-man crew is better than nothing! Still, we don’t yet know if Shouki will be released separately first or if the whole team will be available as a giftset of some sort (in which case we can maybe expect to see more of the rest of the team soon). Here’s hoping that at the very least TakaraTomy reveal the whole thing before the first lad is released (contrary to common third party practice), but at this point, it’s anyone’s guess!

So that’s our list. Are you excited for the new Masterpiece reveals?

This entry was posted in Source Articles Tagged with Countdown, Masterpiece, Raiden, Skyfire

COUNTDOWN: 6 things to know about those new Masterpiece reveals