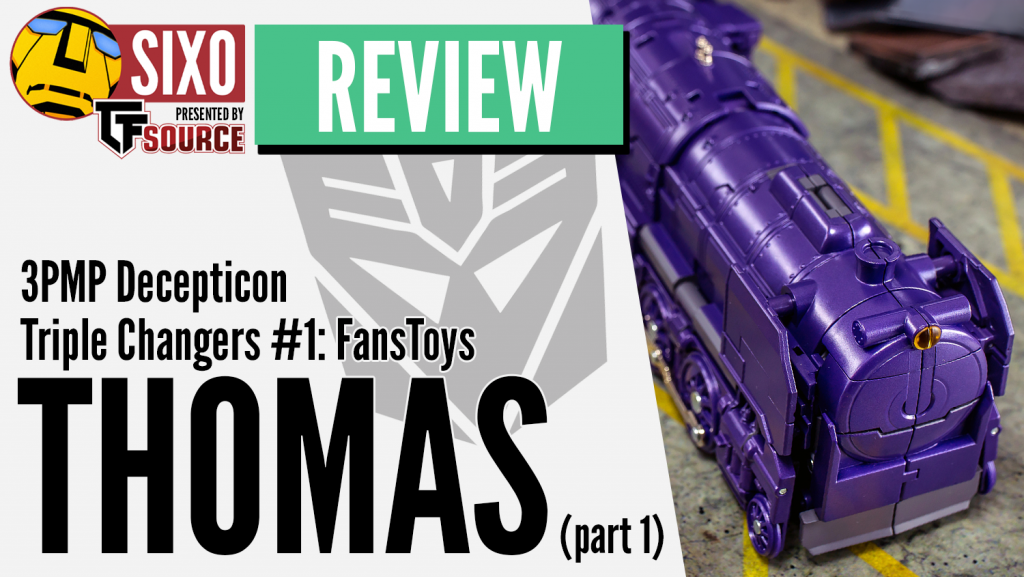 It’s funny (and also very scary) how quickly time passes, isn’t it? I’m often surprised to discover how many weeks or months have suddenly elapsed in the weird world of toy collecting, and particularly when it comes to doing reviews! It seems like I’m forever planning on doing some random project or other only to find out that I’m suddenly well behind on actually getting it done! 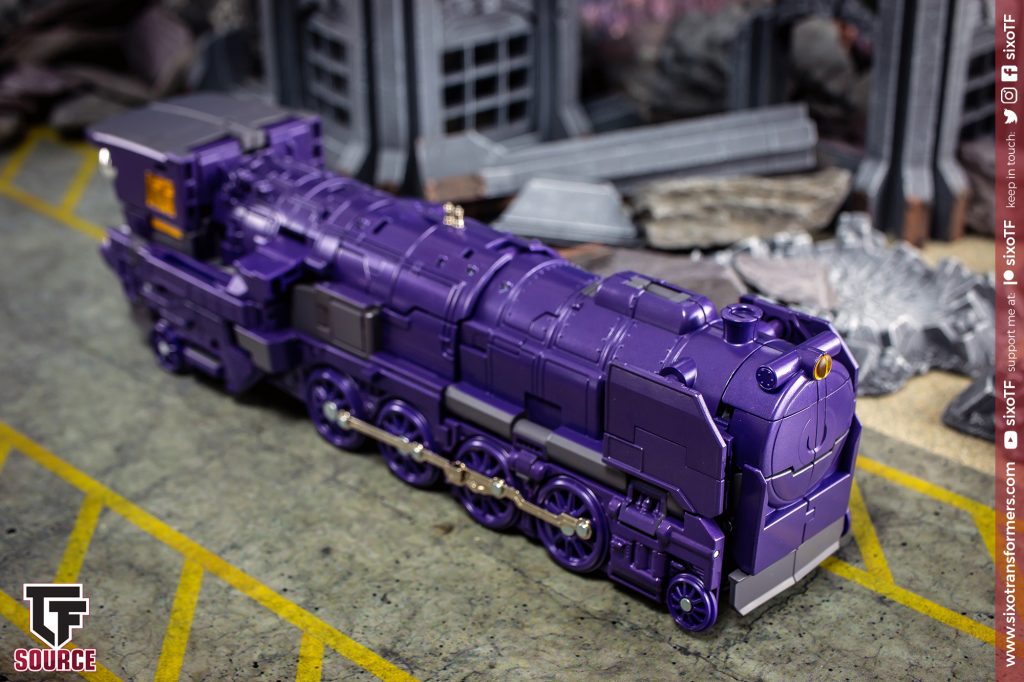 And I say that sincerely as someone who does their fair share of toy reviews! Still, despite having done an initial video on FansToys Thomas back in *checks notes* October, somehow now it’s six months later and I’ve yet to do a complete pictorial write-up on the fella. How’d that happen? 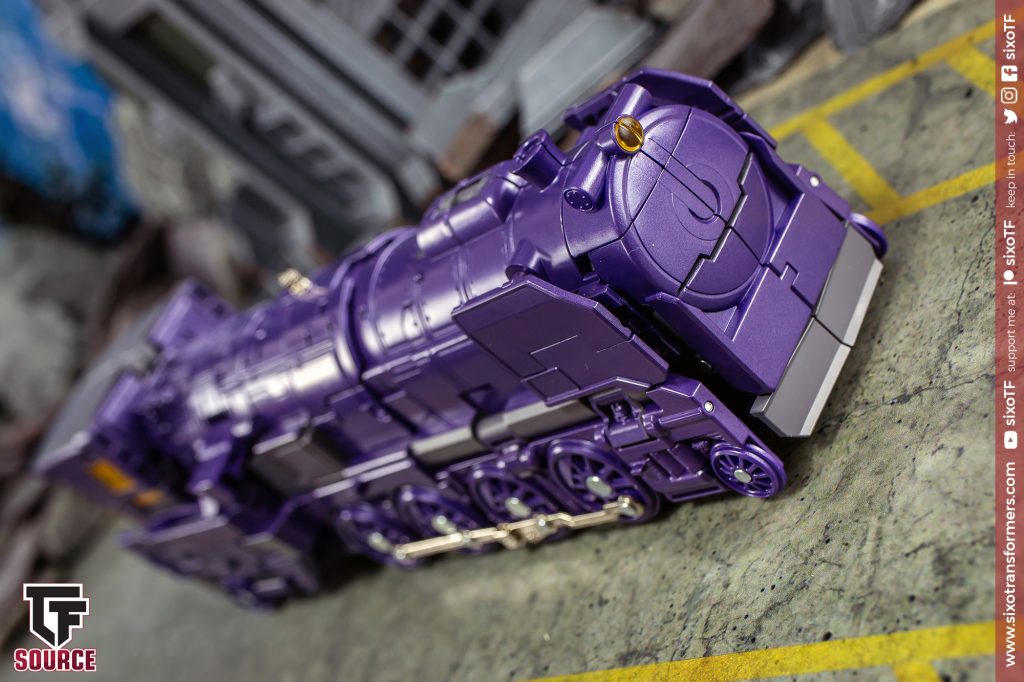 It does mean that I’ve even had the occasion to feature Thomas in my top ten of 2020 article already, which admittedly should give you some idea as to the general sentiment of this review, but still. Anyway, whoever said that trains always run on time, eh? But just like with many a morning commute I’ve had over the years, I’m happy to report we’ve made it to our destination eventually! 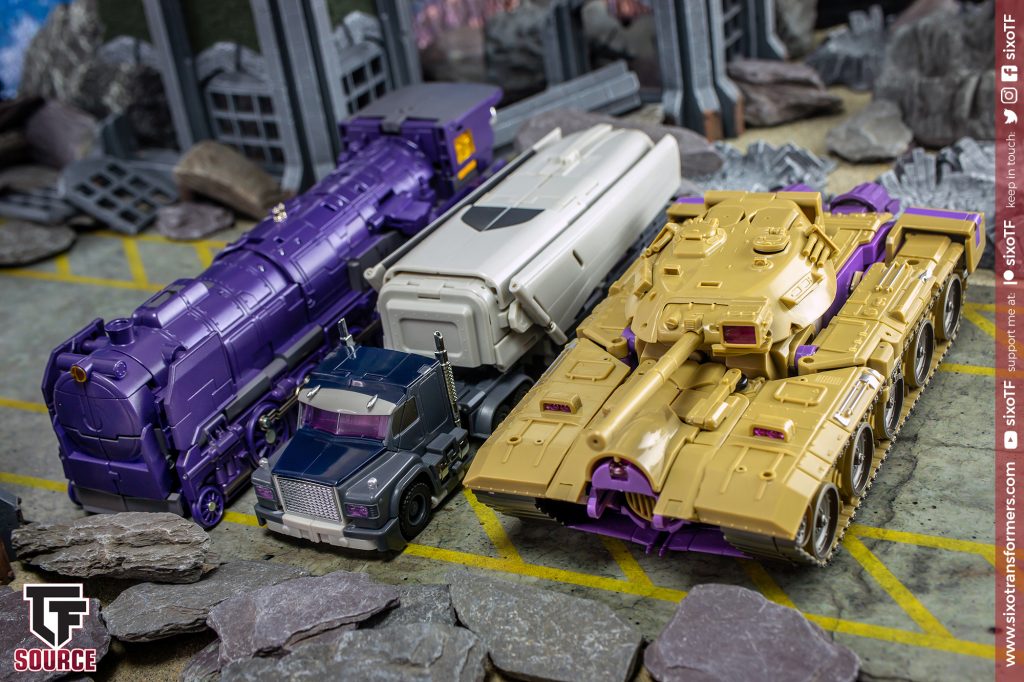 Oh, but there’s more! You see not only is it time to give FansToys’ tyrannical tank engine a tour, but I have two more tantalising triple changers to tease you with. In a bit of a mad moment I’ve volunteered to do a fresh take on both KFC’s Ditka and Stratotanker, both of which are toys I’ve reviewed previously. Come to think of it, I’ve actually reviewed Ditka twice already, but perhaps that’s a story I’ll leave till his turn, eh? 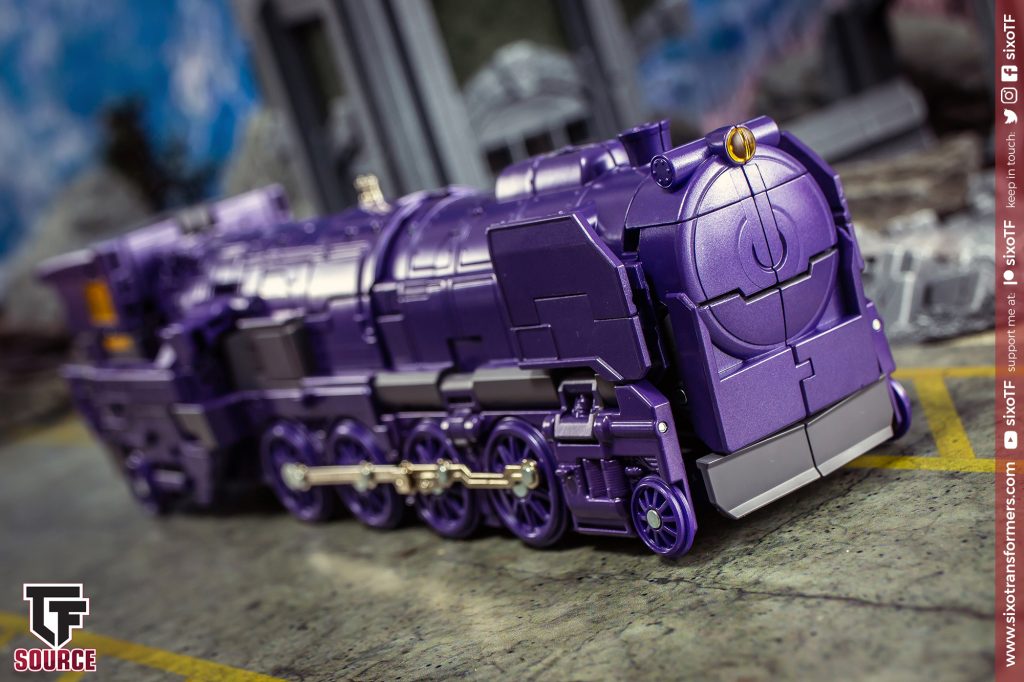 So yes, despite the delay in giving Thomas the full once-over, it seemed somehow strangely fortuitous at the same time, as the opportunity to assess all three 3PMP Decepticon triple changers as a set was too good to pass up. After all, these toys are all in their own regard the most-accurate attempts to their respective character animation models that we’ve seen in Masterpiece style, so it will be interesting to see just how well they fill out this important part of a Decepticon line-up as a trio. 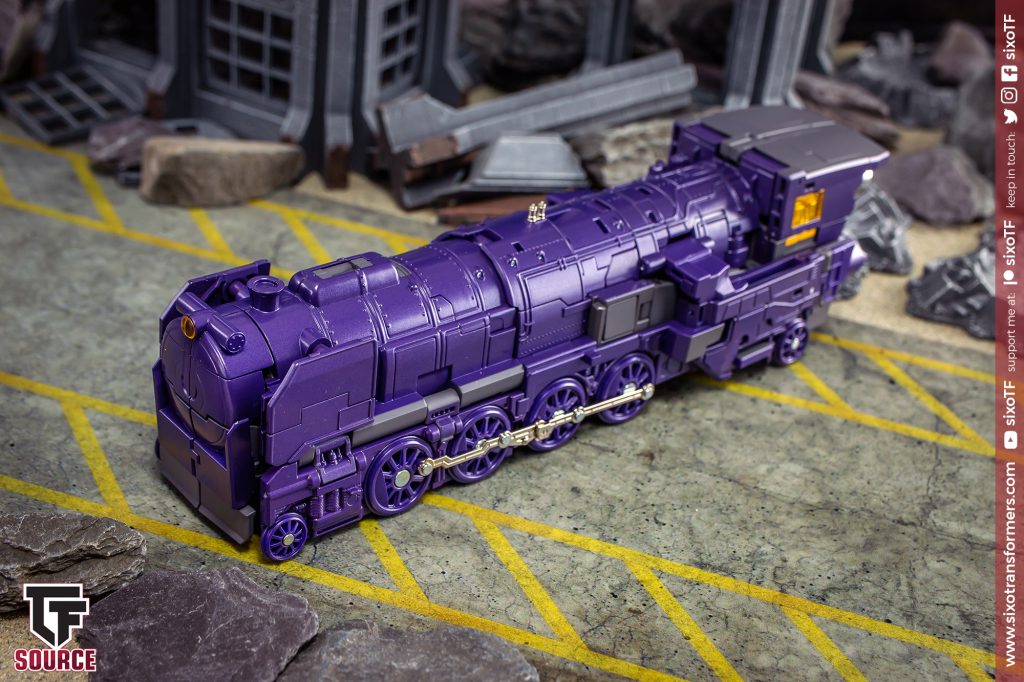 Inevitably when I say that about any of these three toys, someone will pipe up and say “what about DX9’s attempt?”, and whilst it’s true that the rival 3P outfit did put out their own Astrotrain and Blitzwing (and indeed an Octane, under the Unique Toys banner), I never found any of those to be entirely faithful to the cartoon look or style. They are all of them far too stylised for my tastes, despite whatever merits they may have otherwise (although I have to say that I was never much of a fan of DX9’s Gewalt, personally, but again that’s a story for another time). 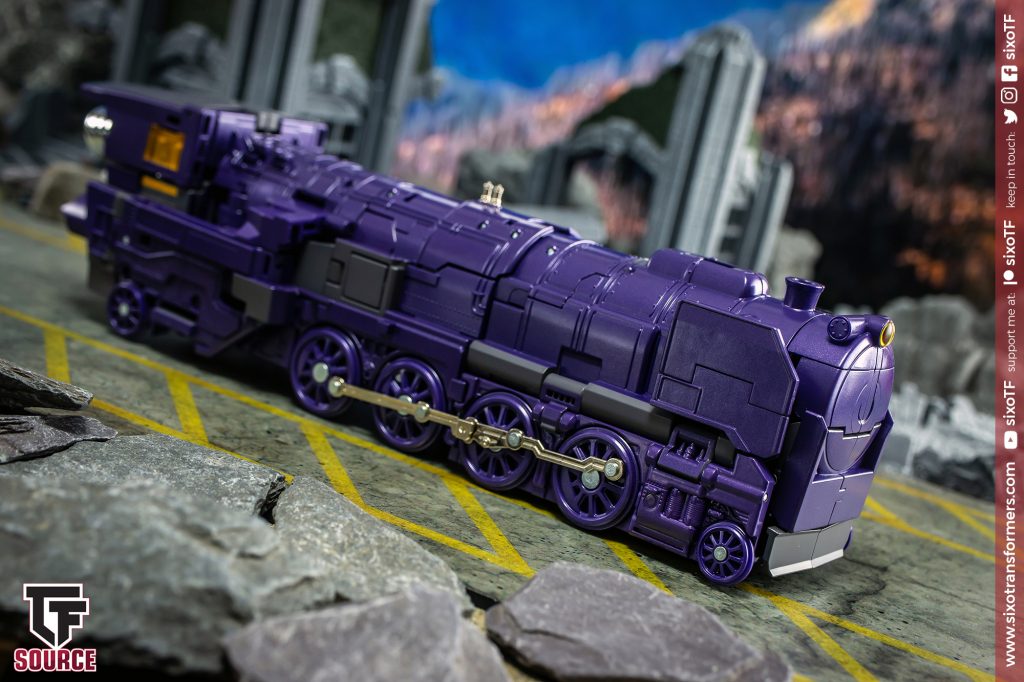 In fact, in the case of Thomas, I’d honestly say that this was a design a lot of collectors have been waiting many years to see come to fruition. Not even from FansToys, necessarily, just the notion of a cartoon-accurate take on Astrotrain full stop. After all, he’s a relative big hitter when it comes to the Decepticon ranks, so his absence from a lot of collectors’ shelves has been keenly felt until now. 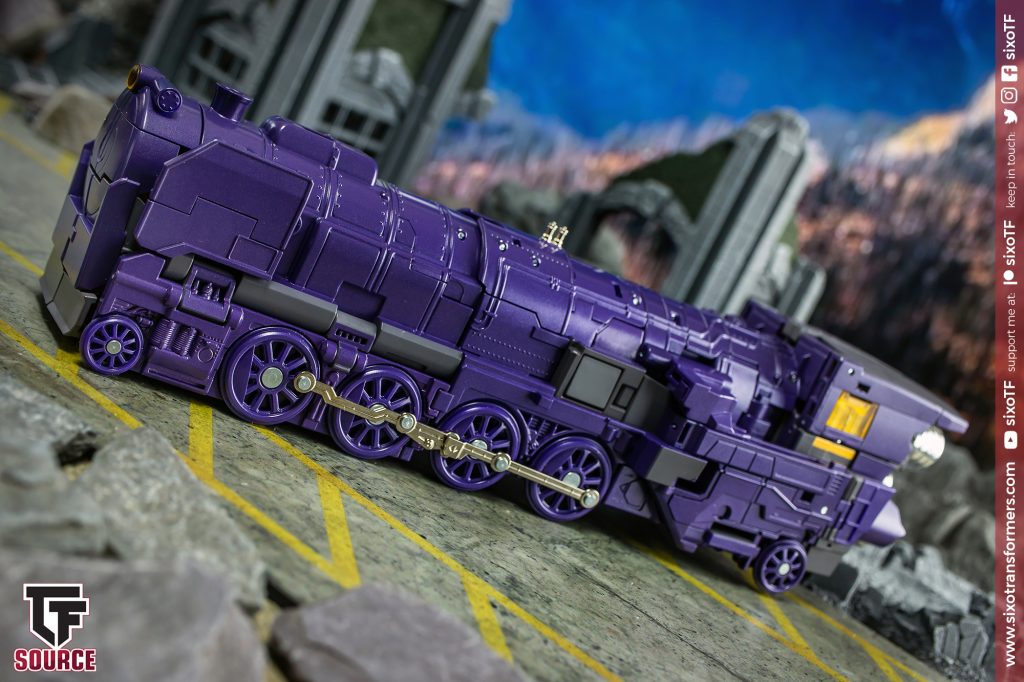 And I include myself in that! I was ecstatic when FansToys first unveiled their prototype images just a little over two years ago, and even more so when it became apparent that they weren’t going to mess around with a long gestation period on this release. It’s fantastic that Thomas turned out to be one of their quickest turnarounds. 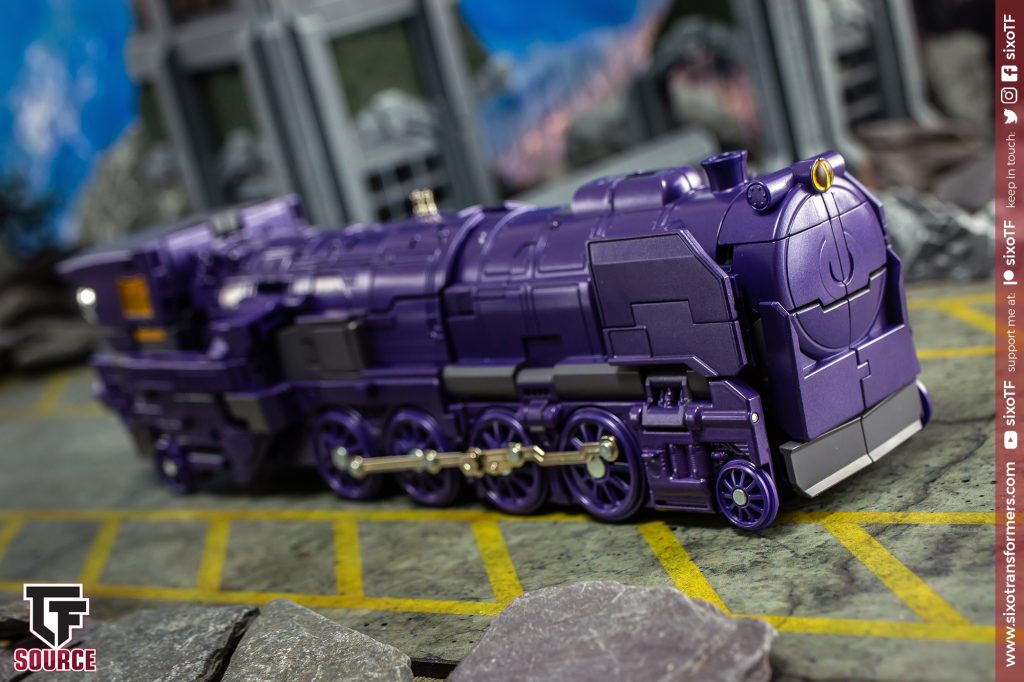 So what of the train mode, then? Is it full steam ahead or stalled at the station? This example is such an oddity of the early days of the Transformers franchise that it was always going to be interesting to see just how successfully it would translate in Masterpiece form, after all! 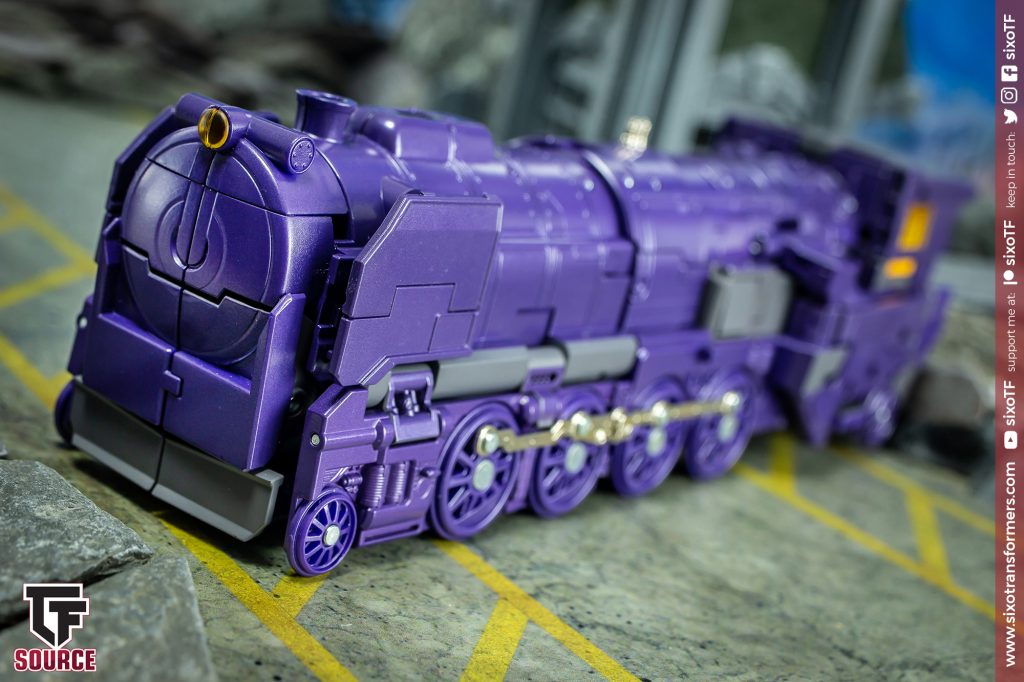 Fortunately, I honestly think FansToys have crushed it. This is everything I could have hoped for from a train mode Astrotrain and more. 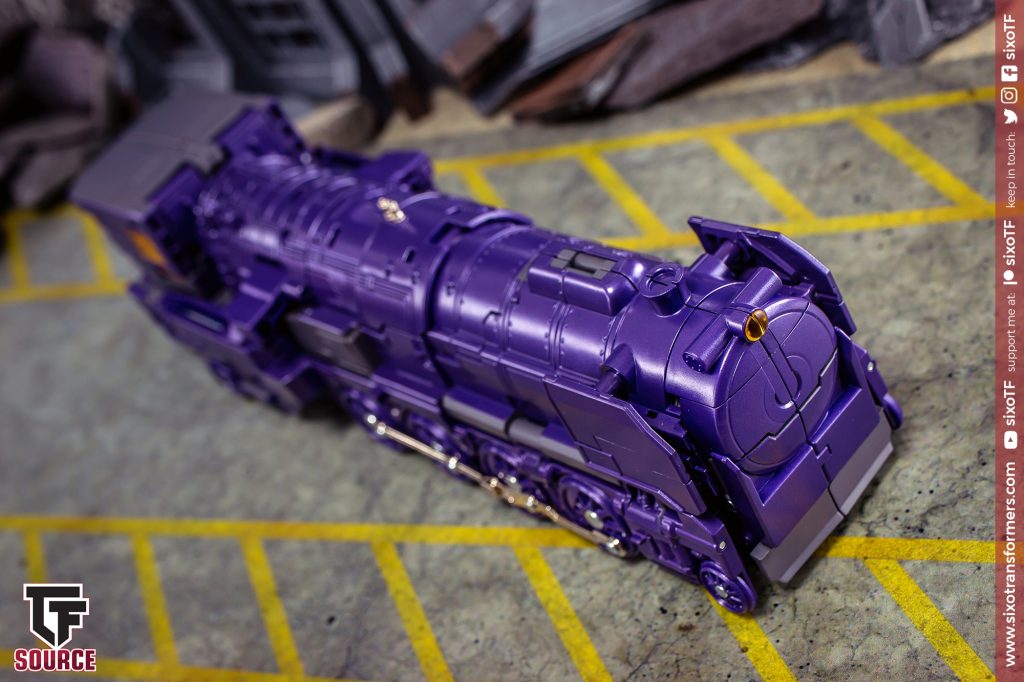 I say that without hyperbole either, as it looks exactly as it should – spot on to the animation model in just about every regard, including the overall look, proportions and even the finer details – but also presents magnificently in its own right. Too often we see examples of extreme cartoon accuracy diminishing what could arguably be done better another way, yet here the designers have swung into that goal and still managed to craft something that’s capable of being admired under its own steam, so to speak. 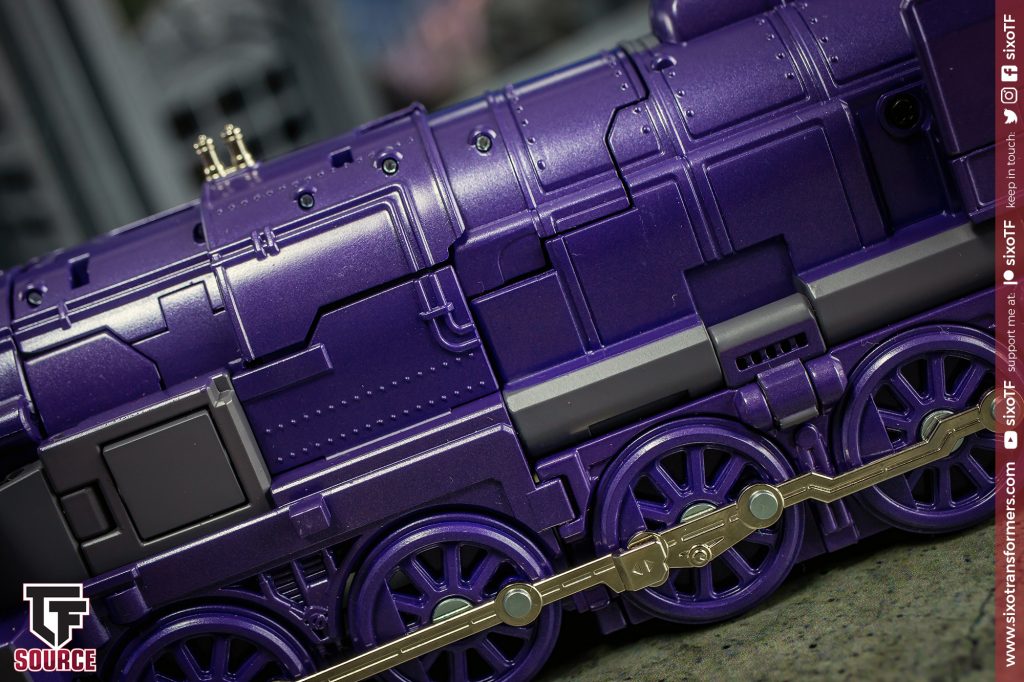 The finish is quite spectacular, for starters. I’m a huge fan of the purple they’ve chosen, which manages to still look vibrant and eye-catching despite how entirely all-encompassing it is on this toy overall. There’s a really charming sparkly quality to it, which meshes very nicely with the intricate moulded detail all over the train mode. 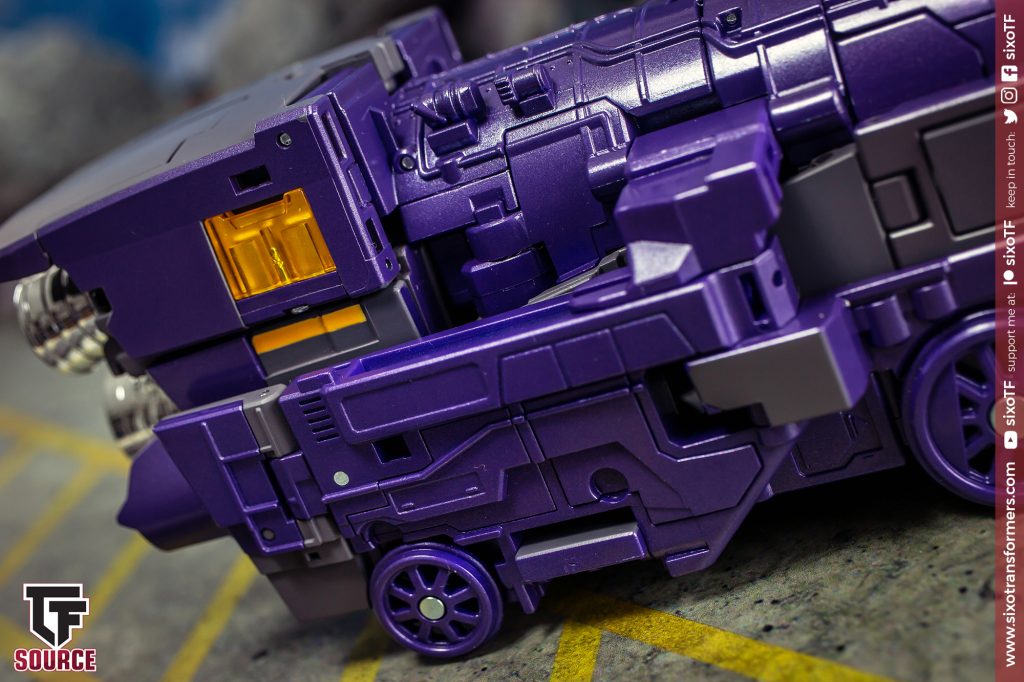 I think that detailing is a big part of what makes the train mode work, in that there’s just enough of a feeling that this thing could legitimately run on rails to be convincing, whilst still incorporating all of the absurdity of the character from the animation. Even the bizarre shuttle thrusters are present in the back! 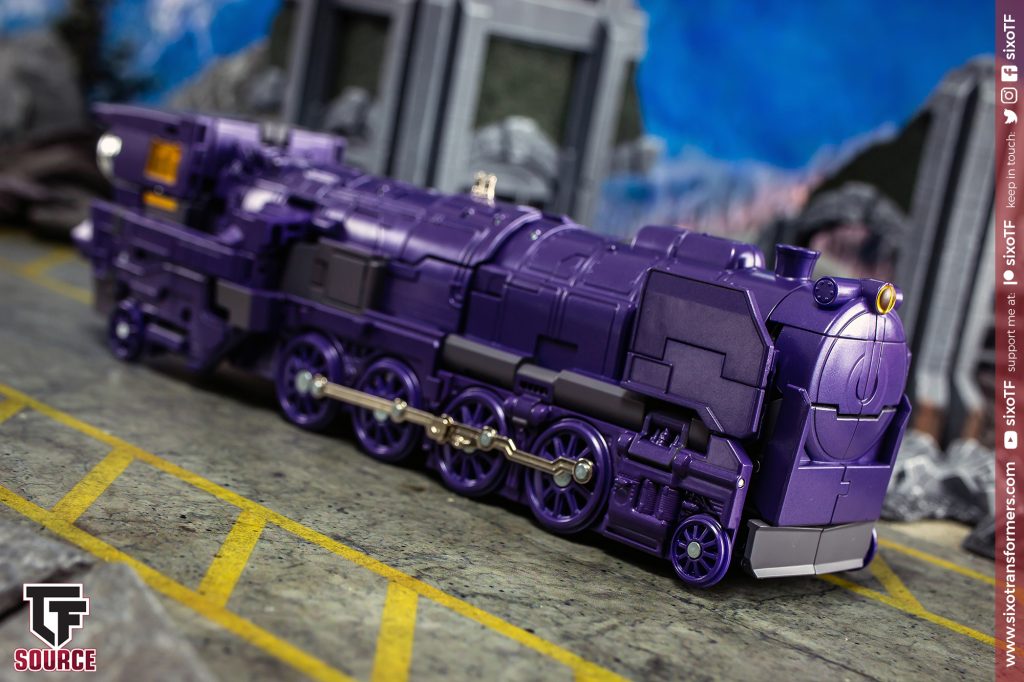 Then there are the wheels and drive rods (technical term alert!) which work surprisingly well on the whole but more than that just look really quite superb! It’s a lovingly-realised bit of work that really helps to sell the train mode quite a bit. Thomas doesn’t “roll” amazingly well, but it’s more than enough for what’s required, in my opinion. 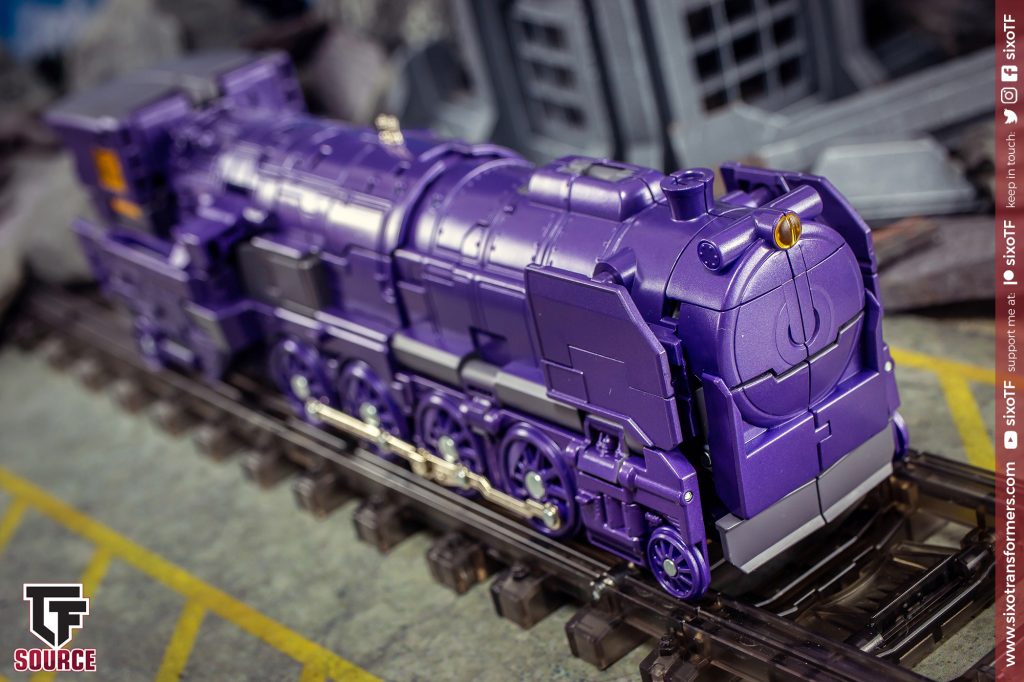 Besides, that’s especially true once you bring in one of the coolest toy accessories I have seen in forever – a set of train tracks! They look absolutely brilliant and Thomas sits atop them perfectly, immediately looking more purposeful somehow despite the character not always requiring such a thing to travel in his cartoon adventures! 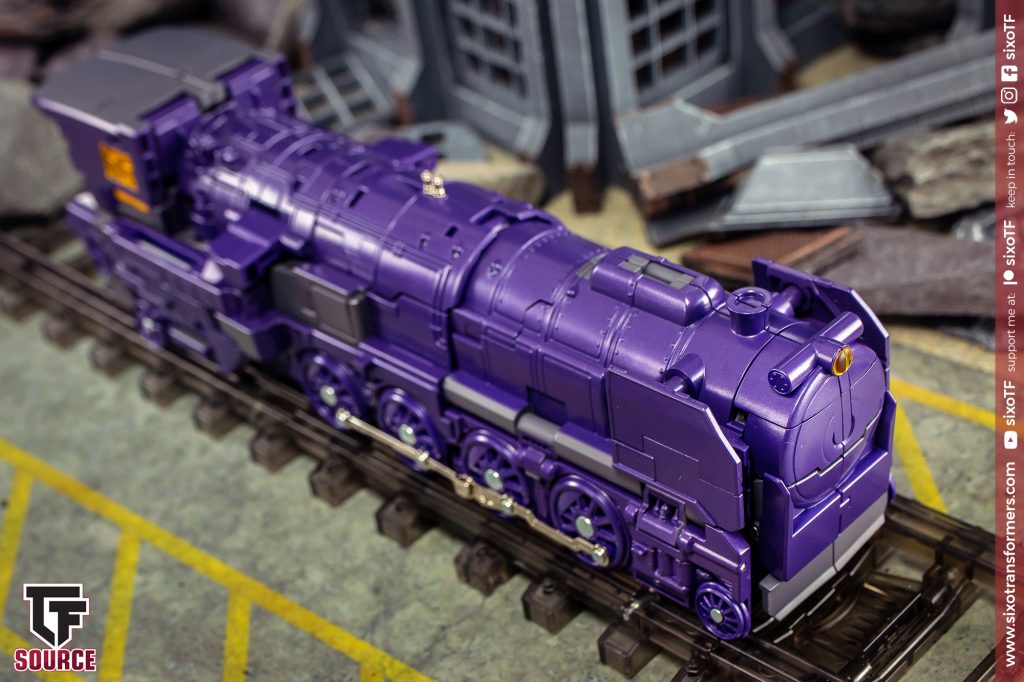 Probably my only nitpick with the rails is that I wish they were a little bit longer, although in truth that’s the photographer in me speaking, and purely because there’s not a lot of extra track to fit into the frame! In reality they make for a fabulous display piece. 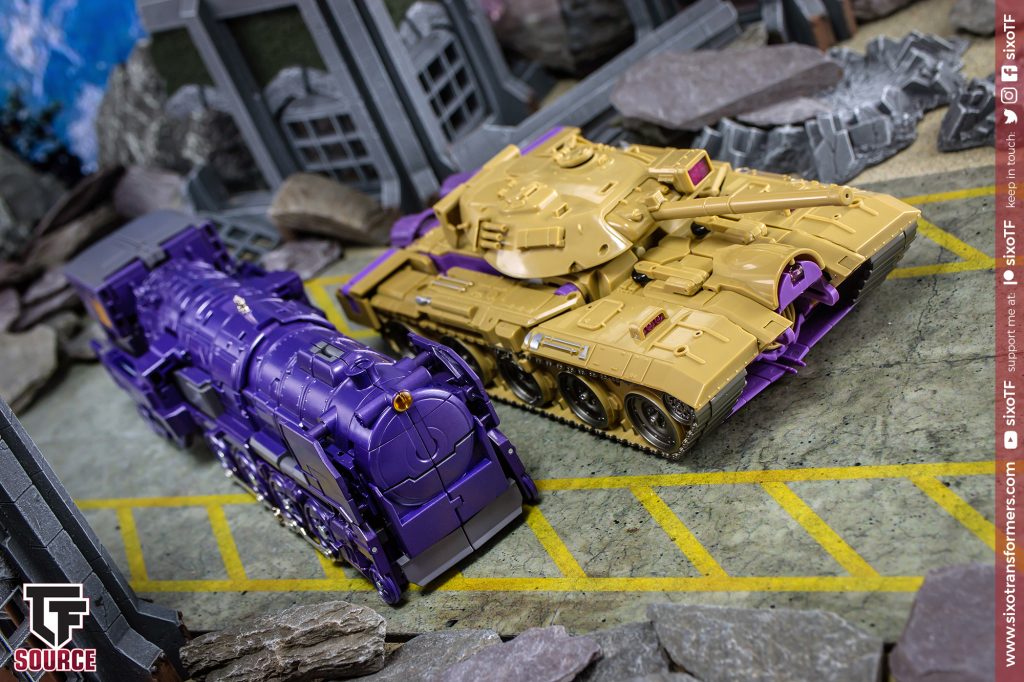 So, Thomas is pretty swish in his train mode, but how well does he gel alongside our other two Decepticon triple changers? I think perhaps the first thing you’ll note will be just how small he looks, if anything, and particularly compared to the likes of the sizeable KFC Ditka in his tank mode! 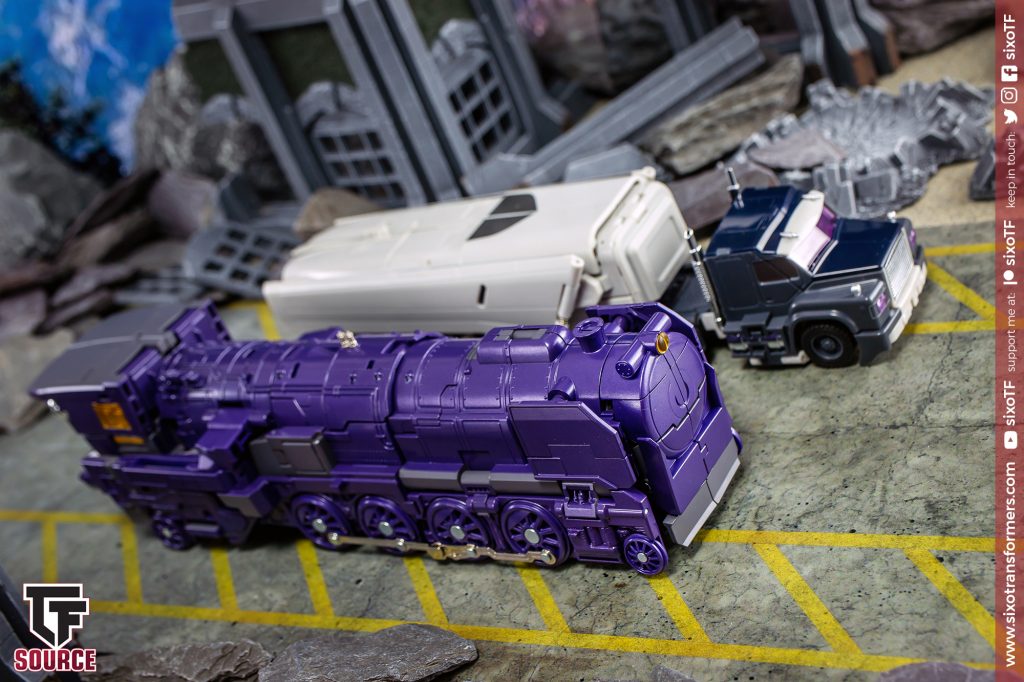 I mean look, alternate form scaling is something that rarely if ever happens in the Masterpiece line, official or otherwise, and even when it does, it’s usually only by coincidence! Besides, I don’t know if I could legitimately tell you how big this train is supposed to be versus that tank and all of that, but it does strike me that Thomas is a little teeny on the whole. For what it’s worth, I think he looks altogether more ‘correct’ versus KFC’s Stratotanker, although again, that’s just my uninformed perception at play! 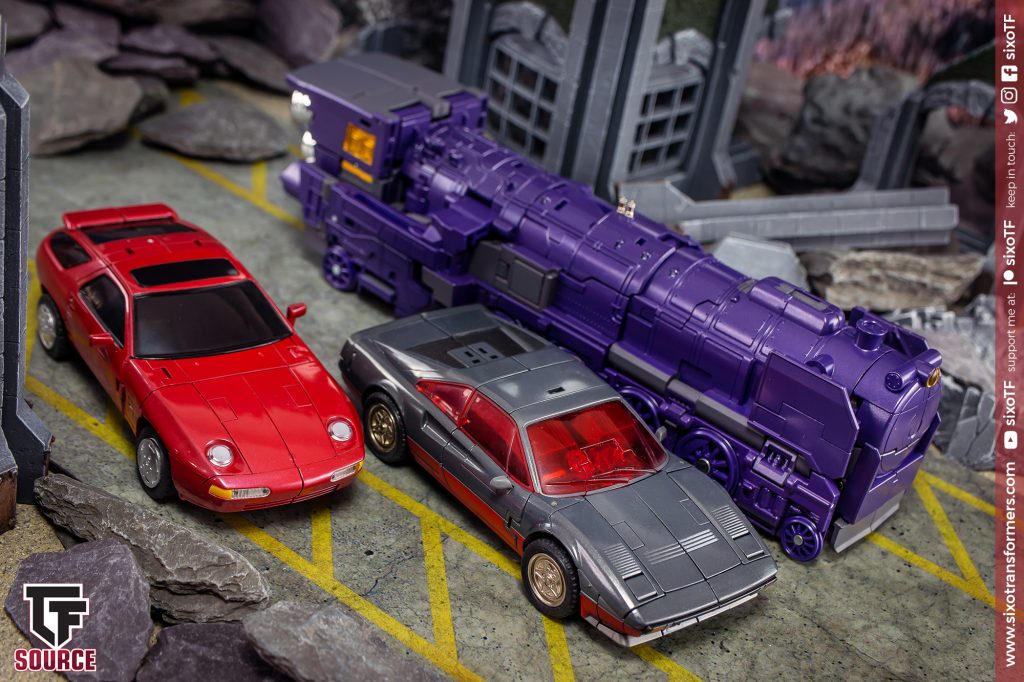 One thing I am sure of is that a number of other toys look hopelessly out of scale versus this thing, including the likes of the DX9 Stunticons in their car modes. Again though, imagine how big Thomas would need to be in robot mode for this to work properly, eh? 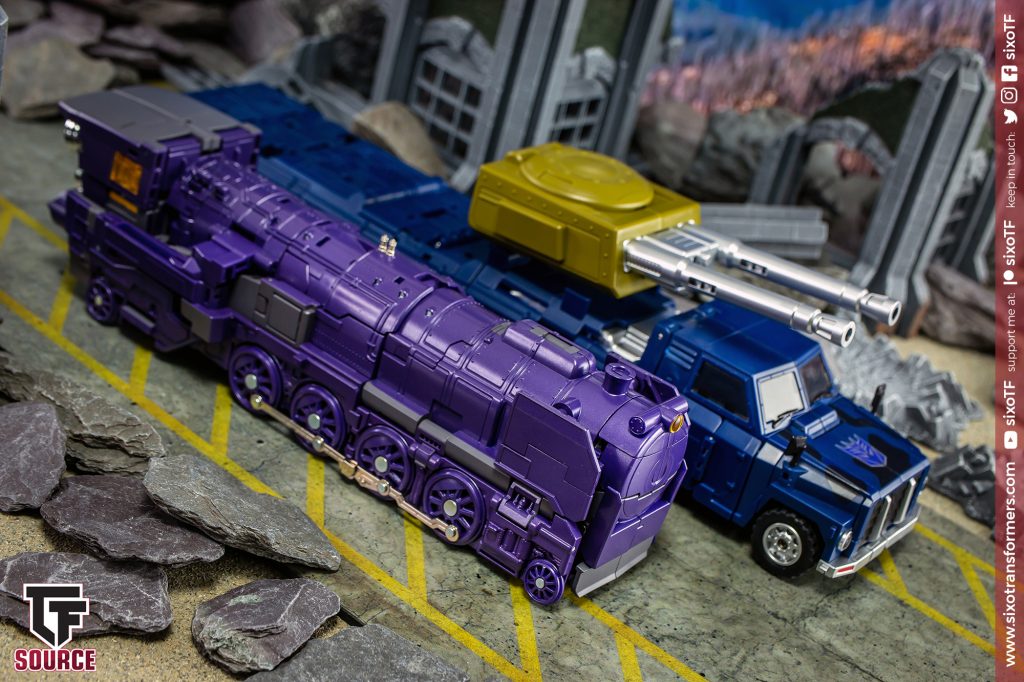 Anyways, size aside I think he looks really quite marvellous versus any number of other Decepticon stand-ins, and certainly lives up to the hype in terms of representing the character how I would have imagined it! 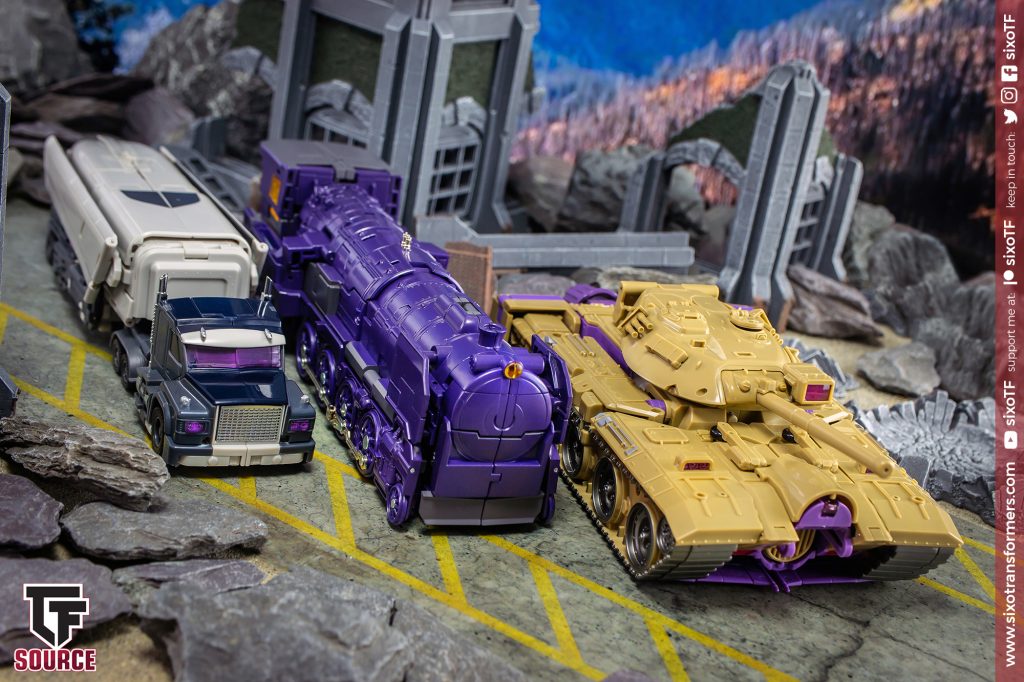 And yes, seeing all three of these lads lined up next to one another in their land-based modes is a bit of a thrill! It’s funny that it’s taken this long to achieve, but there’s definitely a kick to be had out of assembling this little lot, finally. 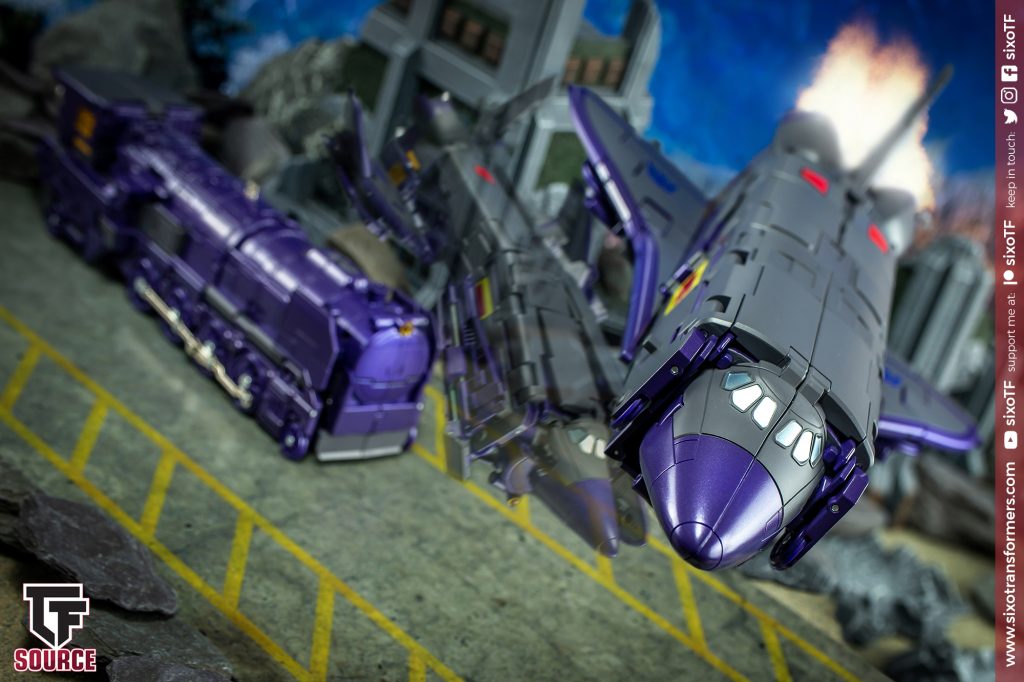 So, a very impressive start for FansToys Thomas as he more than gets us started on the right track. Let’s hope his shuttle mode proves to be as much of a blast!