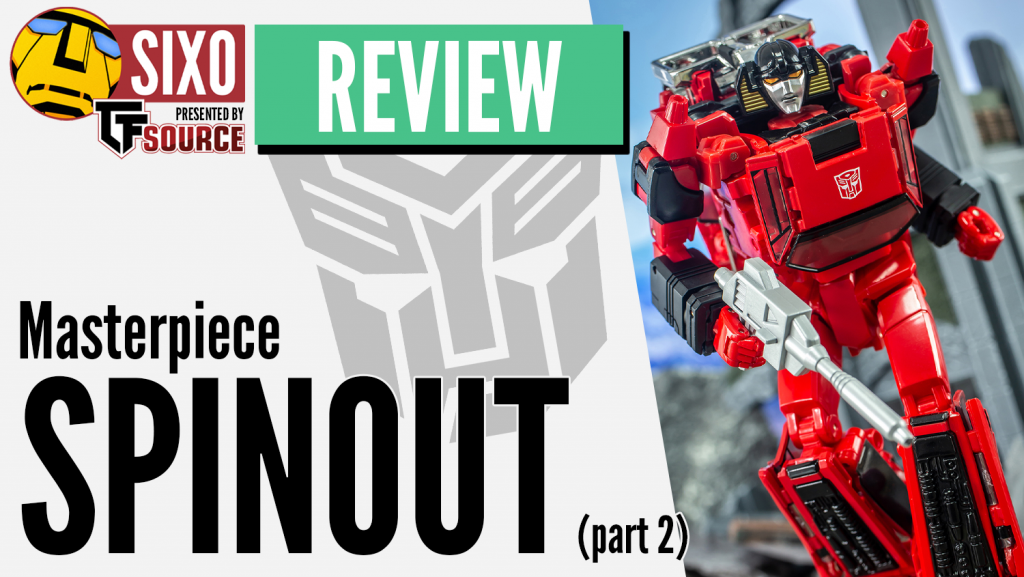 In case you missed part 1 (and why would you have done?), I can handily summarise that it was some 2,000 words of me raving on about how beautiful Masterpiece Spinout’s alternate mode is because, well, have you seen it already? 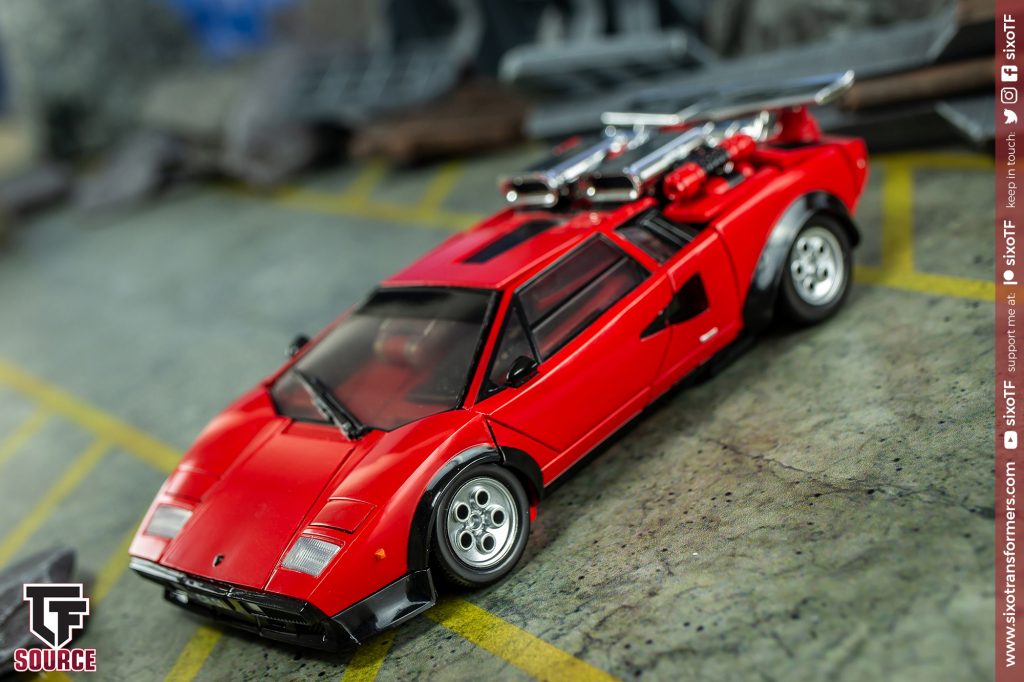 Oh mama, they don’t get much better than that! Anyway, don’t get me started all over again… let’s get this lad transformed up and take a look at the robot mode instead, shall we? The great news is that doing so is a lot of fun too! 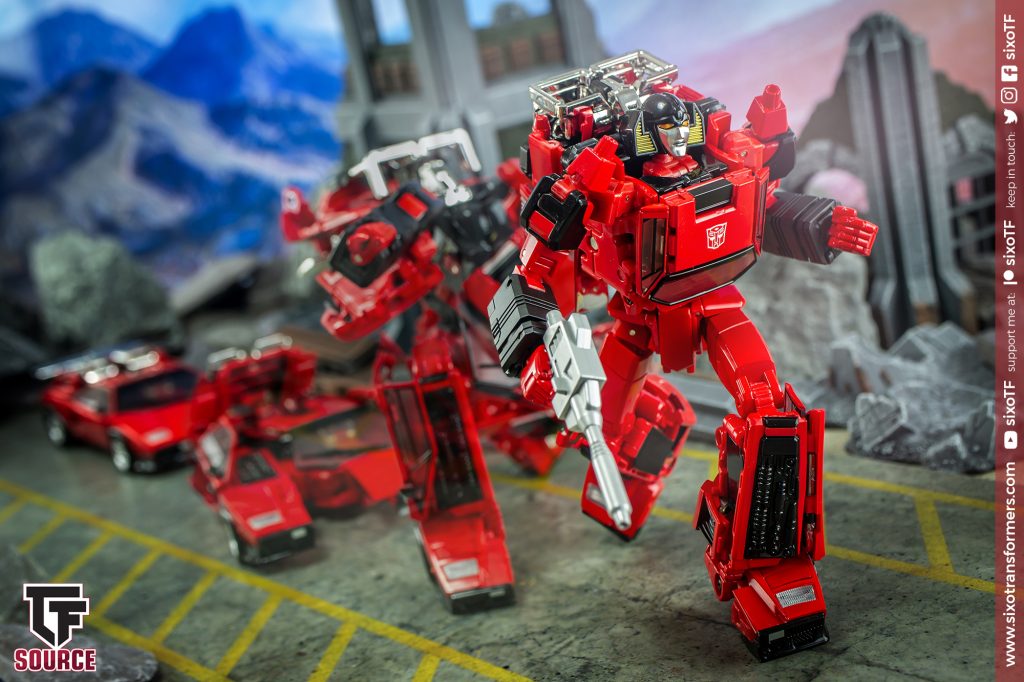 I’ve heard many people opine that this transformation is far too fiddly or complex, that there’s simply too much going on for it to be really enjoyable, but let me tell you, true believer – I steadfastly do not believe that to be the case! In fact, whilst it’s true that it is an intricate and fairly complicated process, it remains a belter from start to finish, and I say that as someone who’s giving the once over to his third version of this mould. 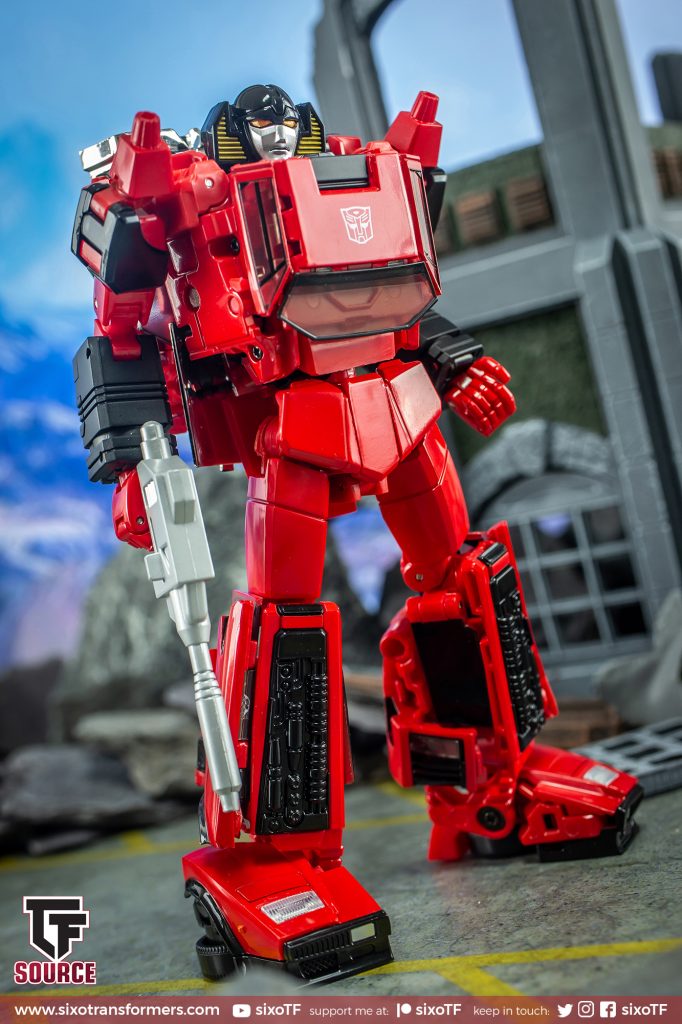 In fact I would continue to rank it as not far off being one of my all-time favourite Masterpiece transformations, almost up there with the likes of Ultra Magnus, Ironhide and Inferno. The big reason behind that is that everything snaps together so wonderfully and ends up clipping into place exactly as it should, meaning that although there are a lot of parts to move, it never feels like a chore. In fact the only bit that continues to give me a little pause is folding the door panels and making sure the wing mirrors are sitting in the right place. 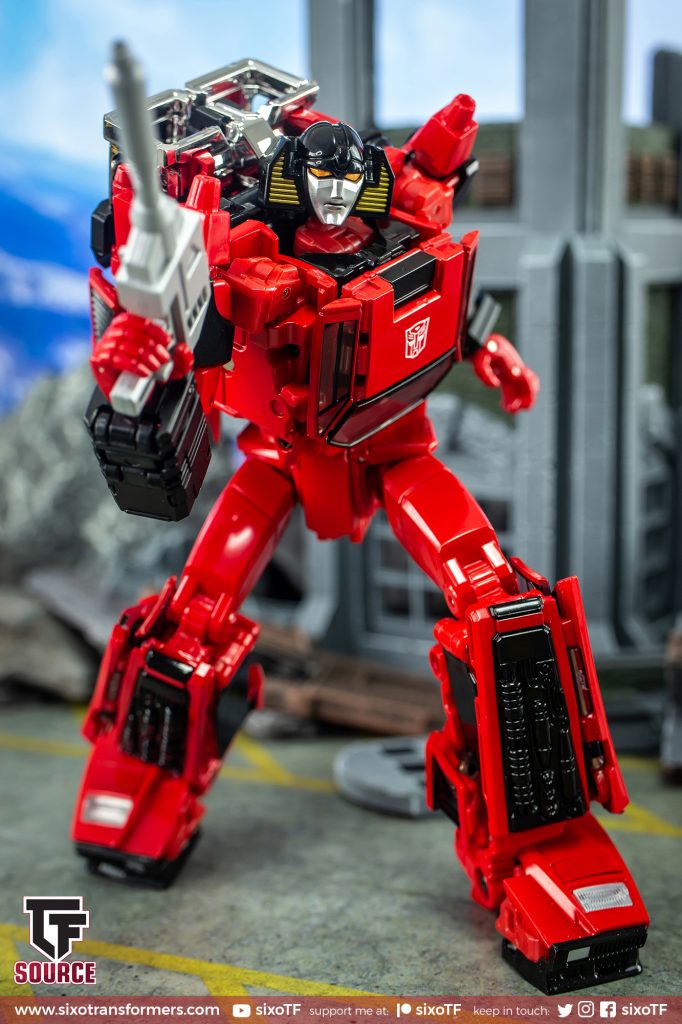 And of course it leaves you with a remarkably handsome hunk of robot too, which is always a satisfying result if you’re going to undertake such an endeavour. Of course in this case, I very much knew what I was in for, having those previous versions in hand and all, but none of that diminished the effect of seeing Spinout in all his glory for the first time. 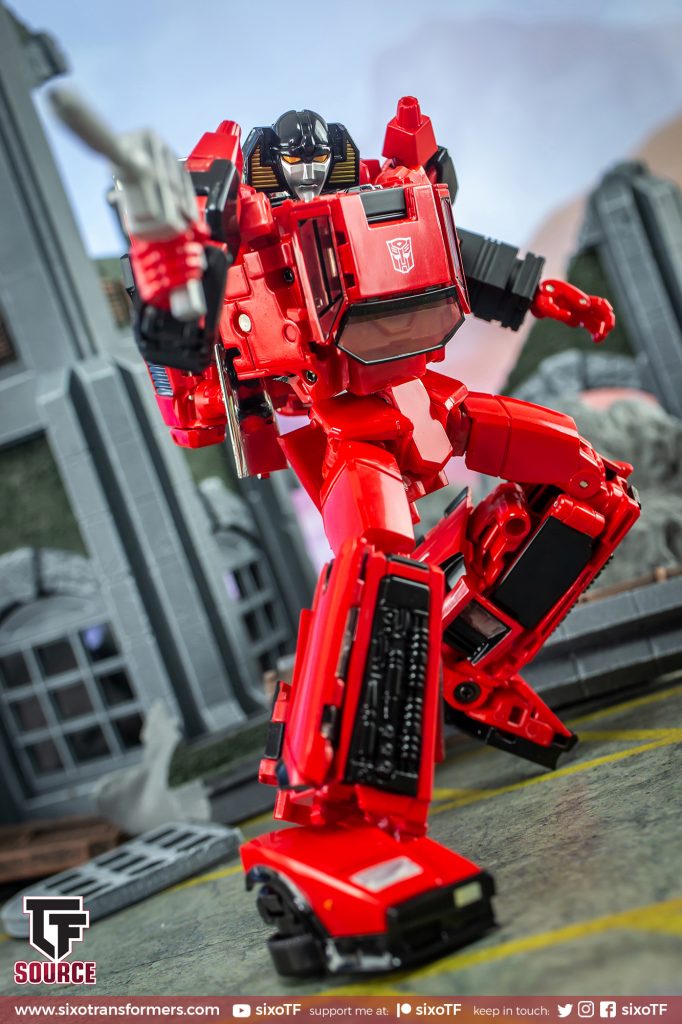 What a babe, eh? The robot mode design was already pretty tasty, but that singeing red colour scheme puts it into overdrive! Spinout is a toy that never fails to grab your attention, let’s put it that way. 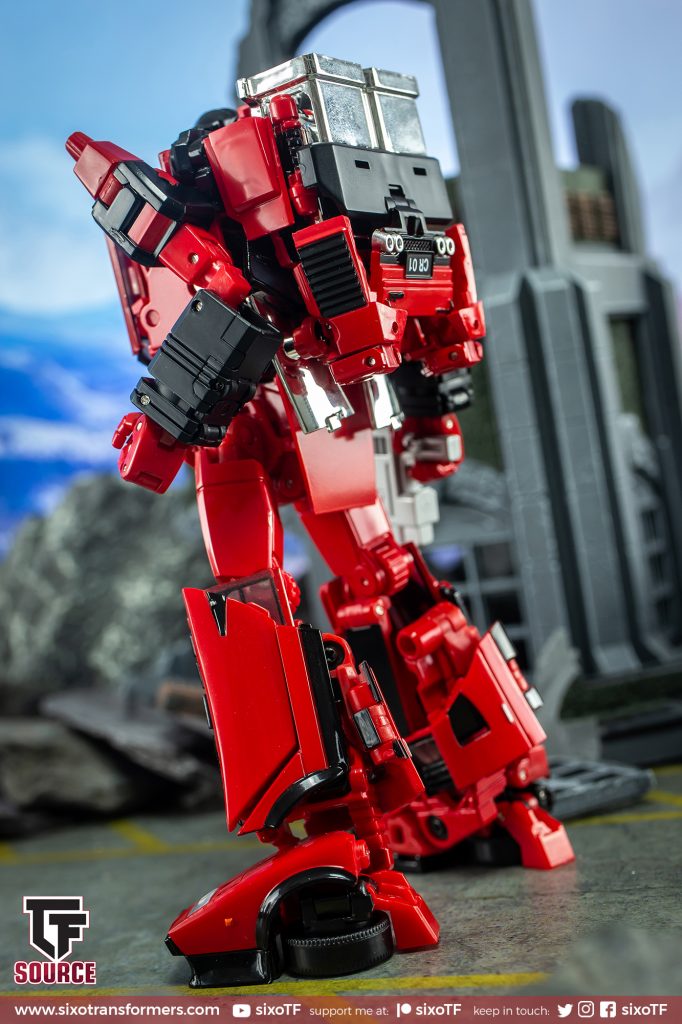 It’s also a very clean design on the whole, despite the presence of some kibble going on round the rear. Most of that is restricted to the backpack, which is something that is treated as a common complaint against the MP line these days, although in this case I’d argue it’s really not an issue in the least. Perhaps the only bit that gives me a nugget of annoyance is the way the bonnet section on his bum can catch against the backpack in some poses, but otherwise it’s very well done, in my opinion. 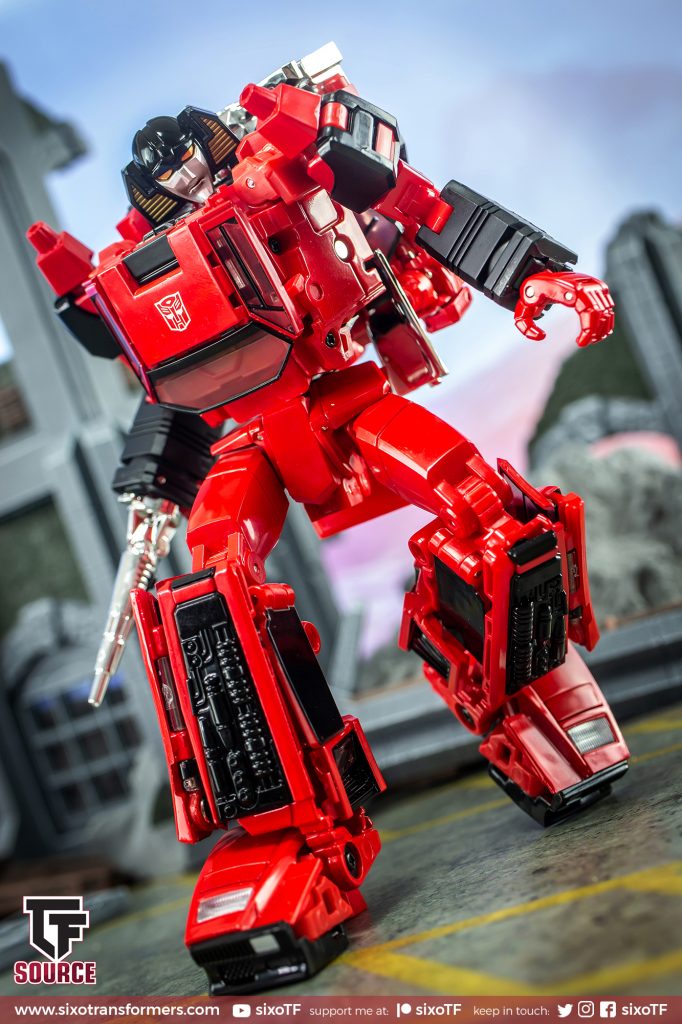 Now, Spinout is very much a straight-up copy of MP-39 Sunstreaker in many regards, though in common with fellow repaint, Cordon, there is some remoulding going on here too. The most obvious spot (other than the head) is on the shins, where you’ll find an added dab of detail in order to better recreate the look of the vintage toy in modern form. 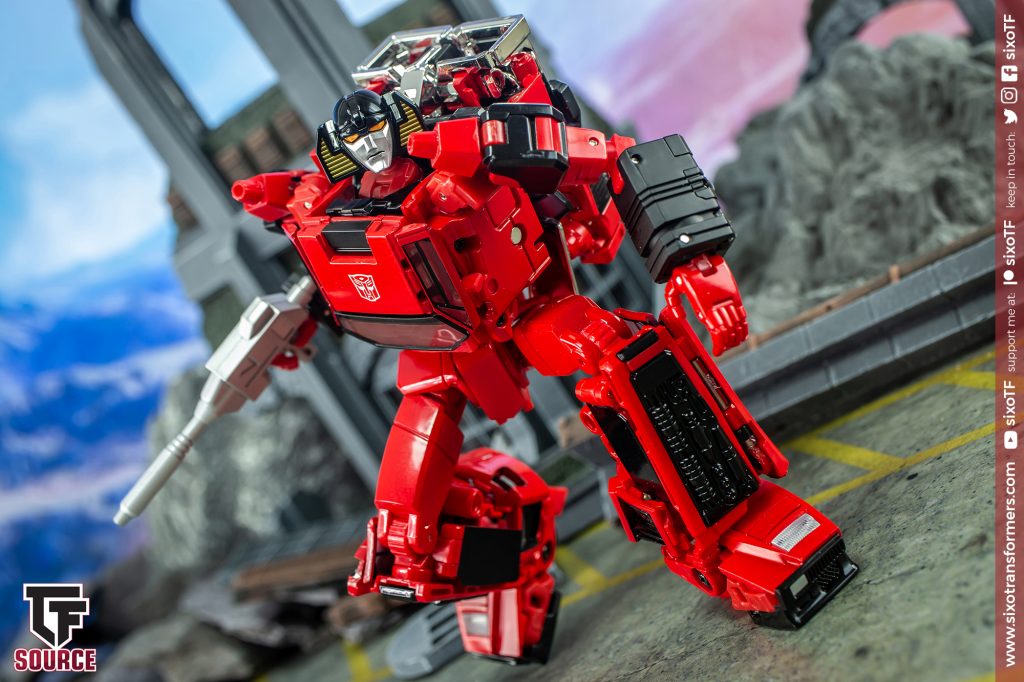 That toy was of course No. 1 Countach LP500S, the original ‘red Sunstreaker’ from the pre-Transformers era (prior to the toy being given a yellow colour scheme as part of its introduction to the first year of the robots in disguise) and the very first ‘Car Robots’ toy from the Diaclone line. That makes it an ancestor of every transforming robot toy that’s followed since, and it’s great to see such an important piece of vintage toy history being given a superior modern makeover here. 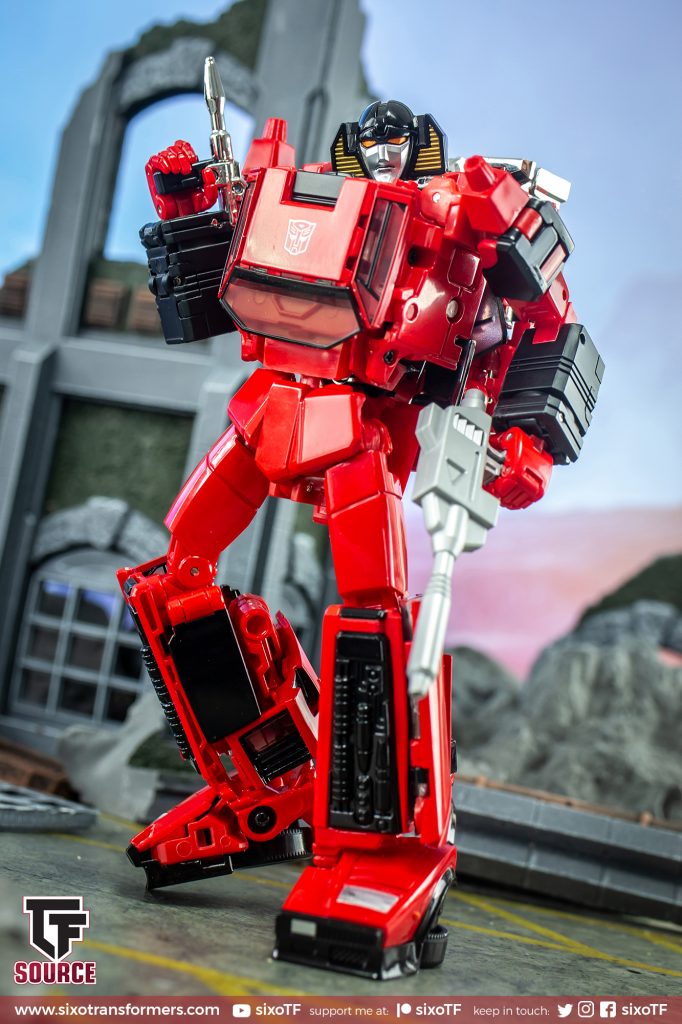 After all, although this is a Sunstreaker copy, it feels surprisingly fresh, all its own thing in many ways. The colour scheme sets it apart, sure, but there’s a very different vibe going on that I really appreciate overall. 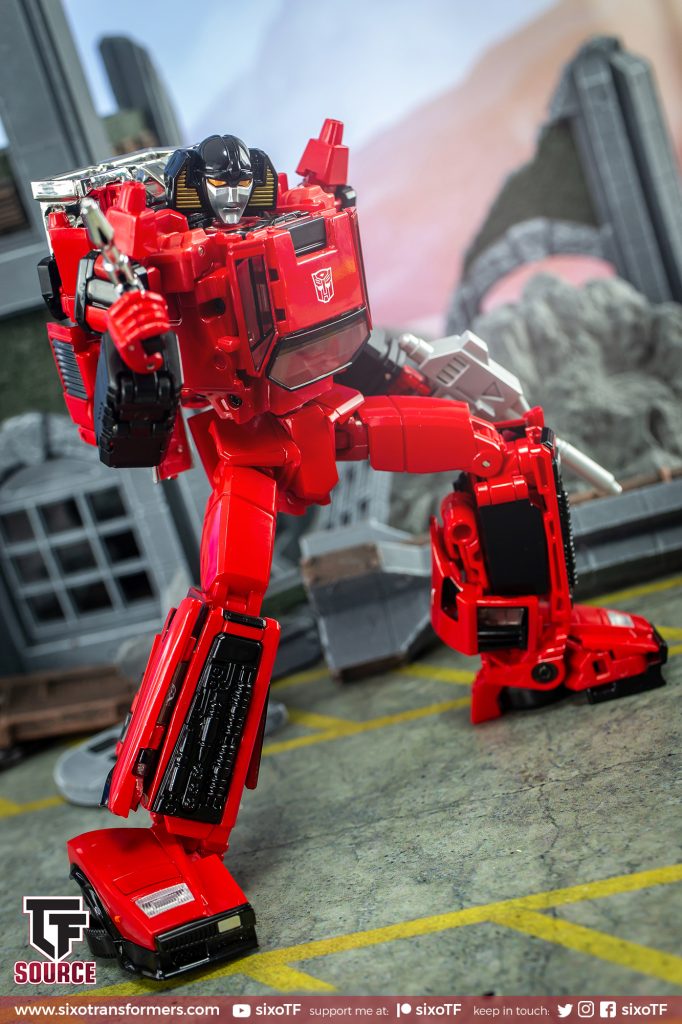 The new head is definitely a big part of that, too. Much closer in style to the vintage toy instead of the cartoony aesthetic preferred by MP-39, it looks nothing shy of fabulous, a highly worthy update on a classic original. I’ve seen a few people questioning the yellow ‘ear muffs’, but again, that’s exactly the colour scheme of the Diaclone toy being recreated here. 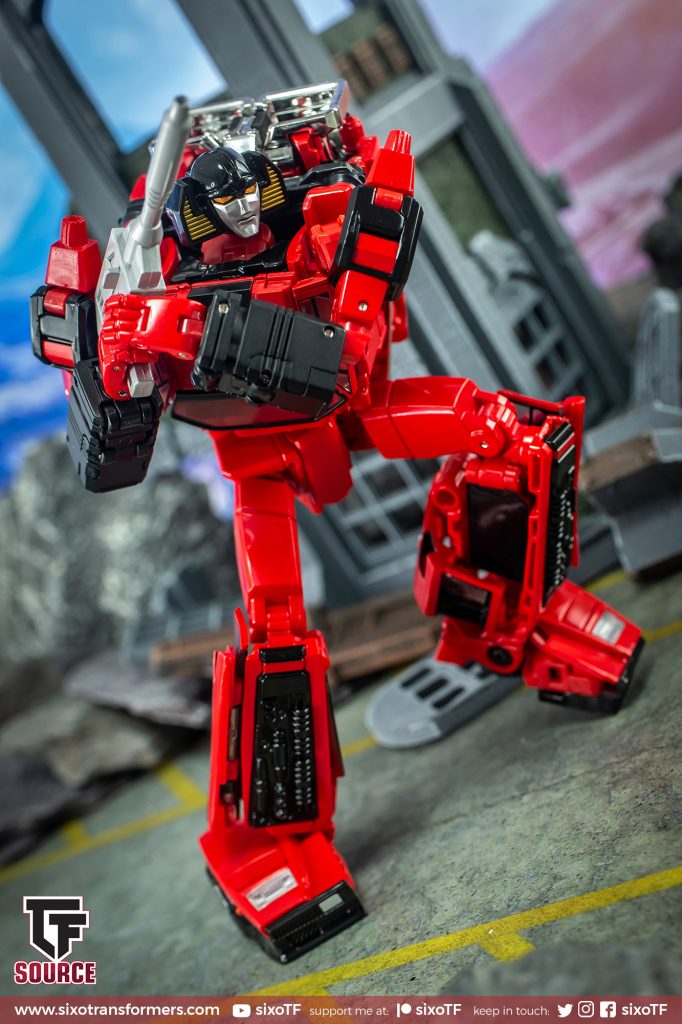 Otherwise the colours on offer here are remarkably uniform, yet surprisingly eye-catching. You might think having him all dressed up like he’s in a massive red onesie wouldn’t work, especially as otherwise it’s a few panels of black, the odd splash of white or silver, the chrome on the backpack and the yellow ears, but it’s actually quite effective! 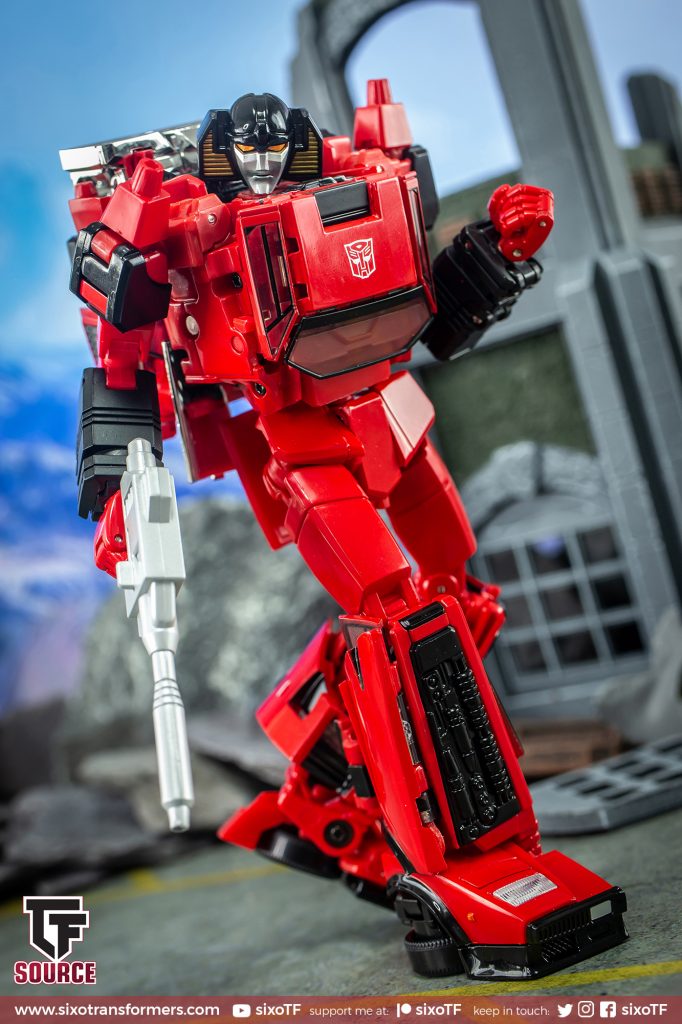 So, good looks all round, but how does he handle? Well, in case I’ve never mentioned it before in regards the original Sunstreaker version (I have, many times!), this design is a joy from start to finish. In fact it makes the previous Carbots in the Masterpiece line look very simple by comparison. 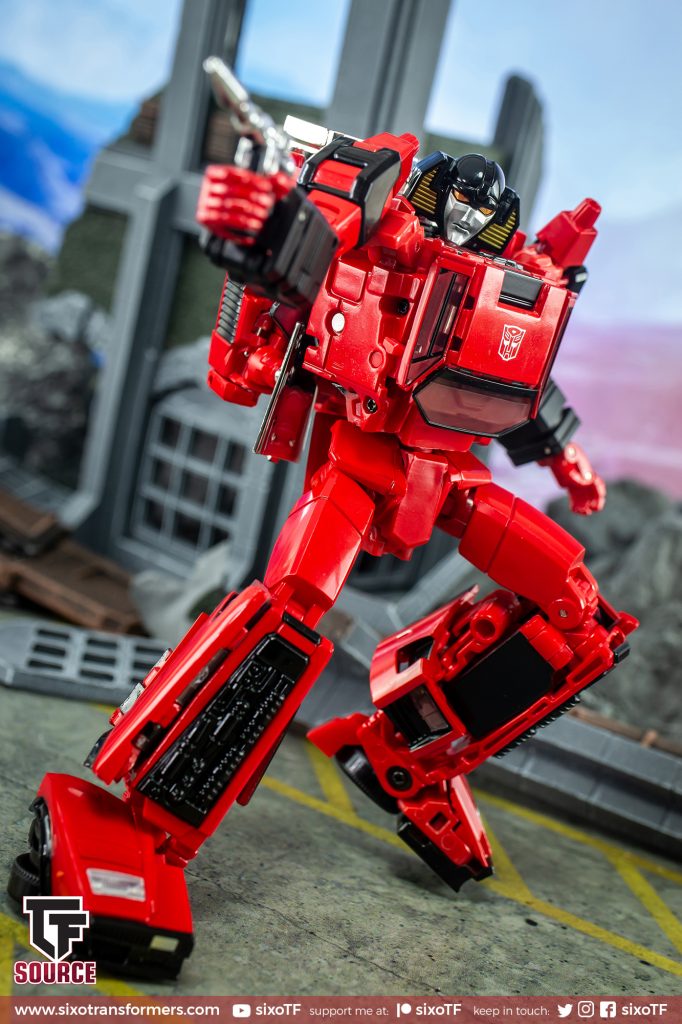 A lot of that is down to the incredible articulation on offer. Whereas examples such as MP-12 Lambor (or Sideswipe to you and me!) had all of the joints and posability you might expect, MP-39+ here pushes it all a lot further. Joints have more range and fluidity, there are extra efforts made to incorporate additional points of movement throughout, and really the weight and balance of it all comes together so beautifully that it’s just a joy to handle and pose. 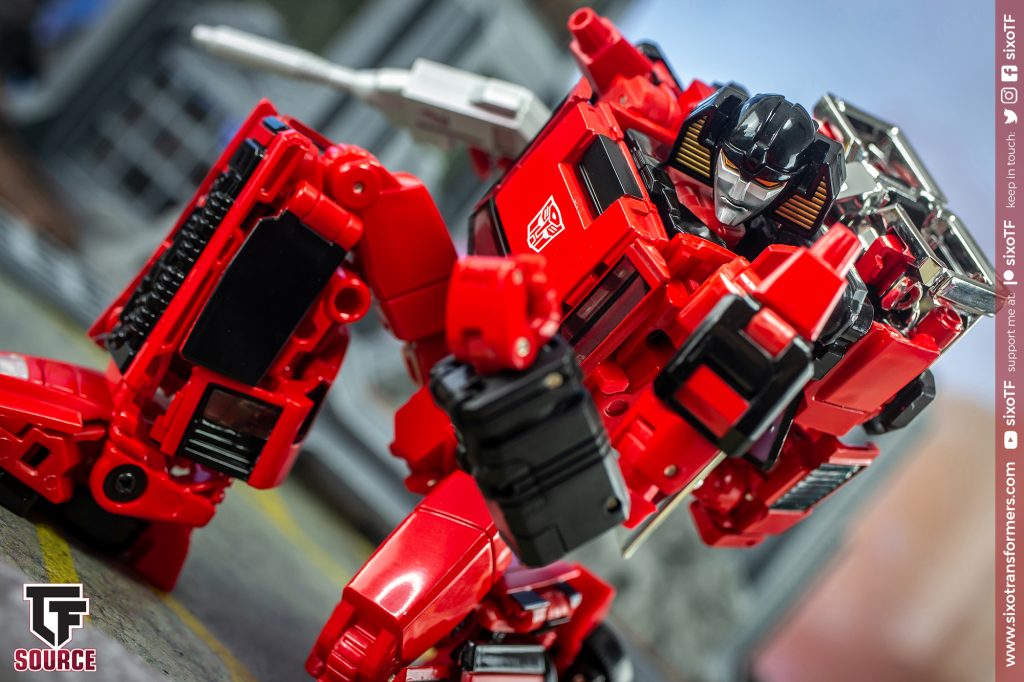 That includes points such as outward ankle tilt, a very decent range at the waist, butterfly joints in the shoulders and movable wrists, along with some nice soft clicky ratchets in areas such as the knees. It all adds up pretty quickly and makes Spinout feel like a proper posable action figure when compared to your typical Transformers toy. 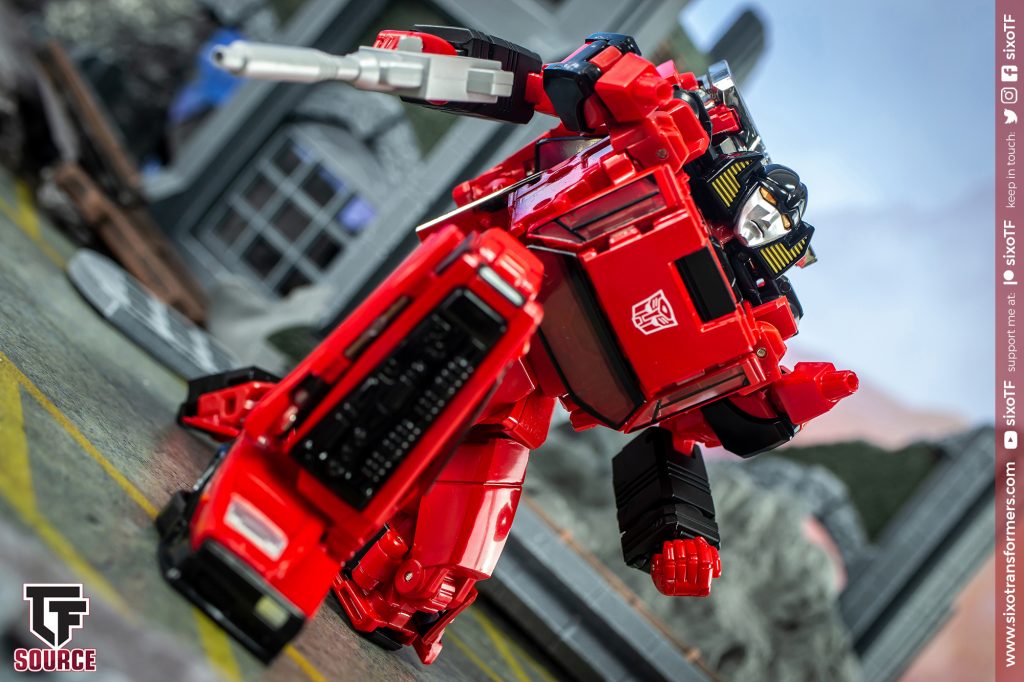 It also makes him a lot of fun to photograph, which I appreciate won’t be everyone’s requirement for a toy of this kind, but for my money it’s certainly worth the entry price. 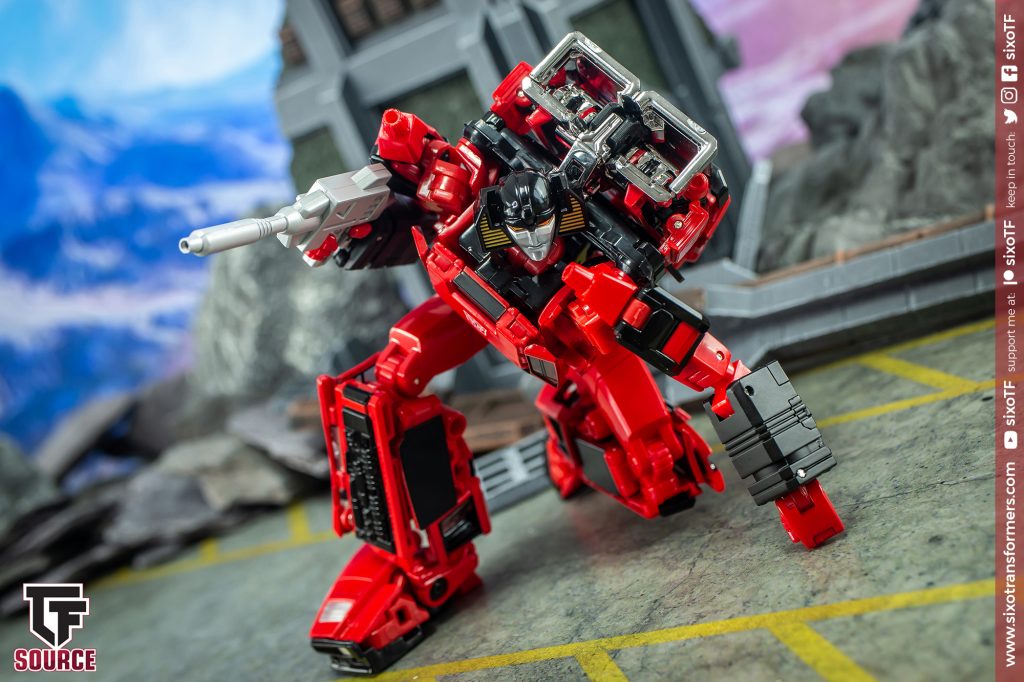 Right, let’s talk accessories, then. First up, he has his more traditional long-barrelled rifle, which pegs relatively securely into either hand and does the job nicely. 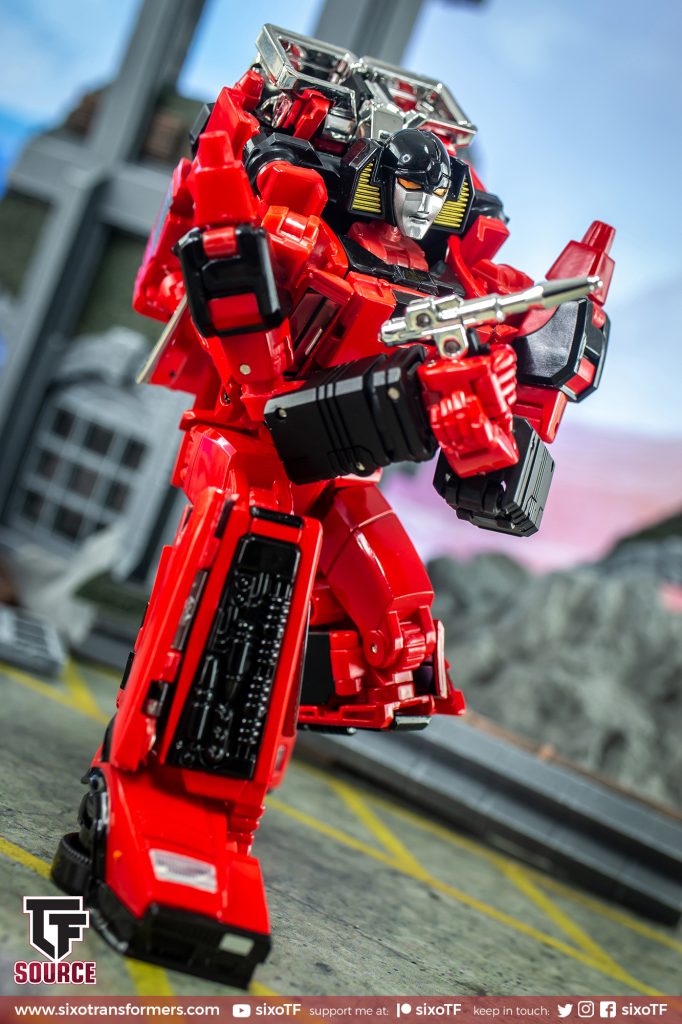 Next we have his very fetching chromed blaster, which I think on balance is my personal favourite. It also folds up and stores away very neatly inside either leg, in a neat twist. 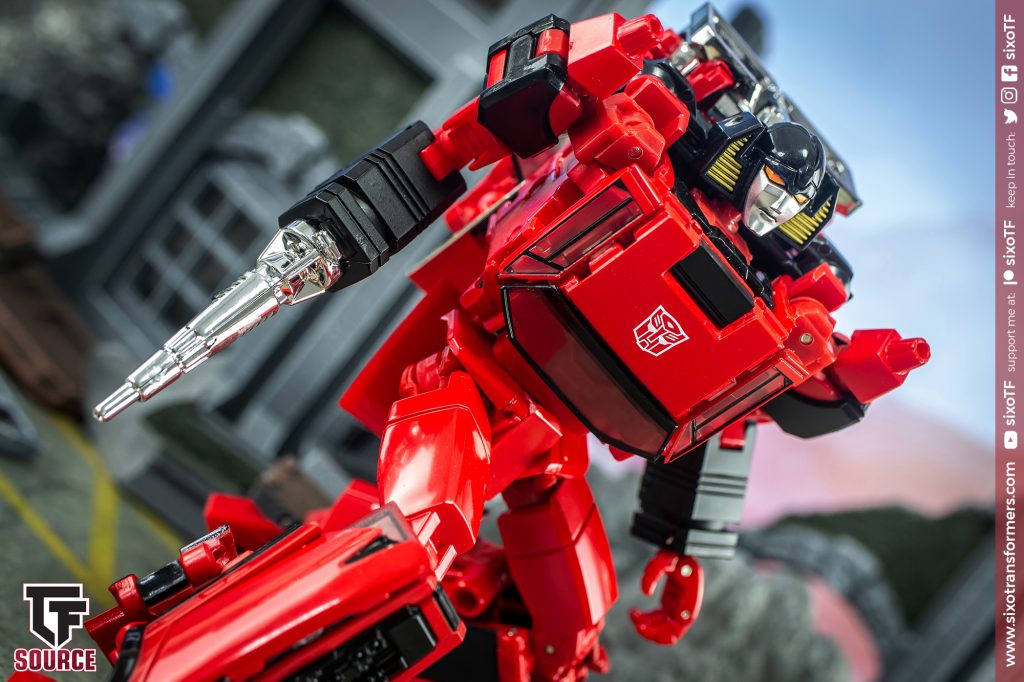 Then, just like Cordon, you have his wrist-mounted weapon, too. Simply fold away his hand and it pegs in place over the top. Overall I think it works very nicely and the chrome looks great, although I will say that his red hand looks all-too obvious from the underside of the arm, in my book. 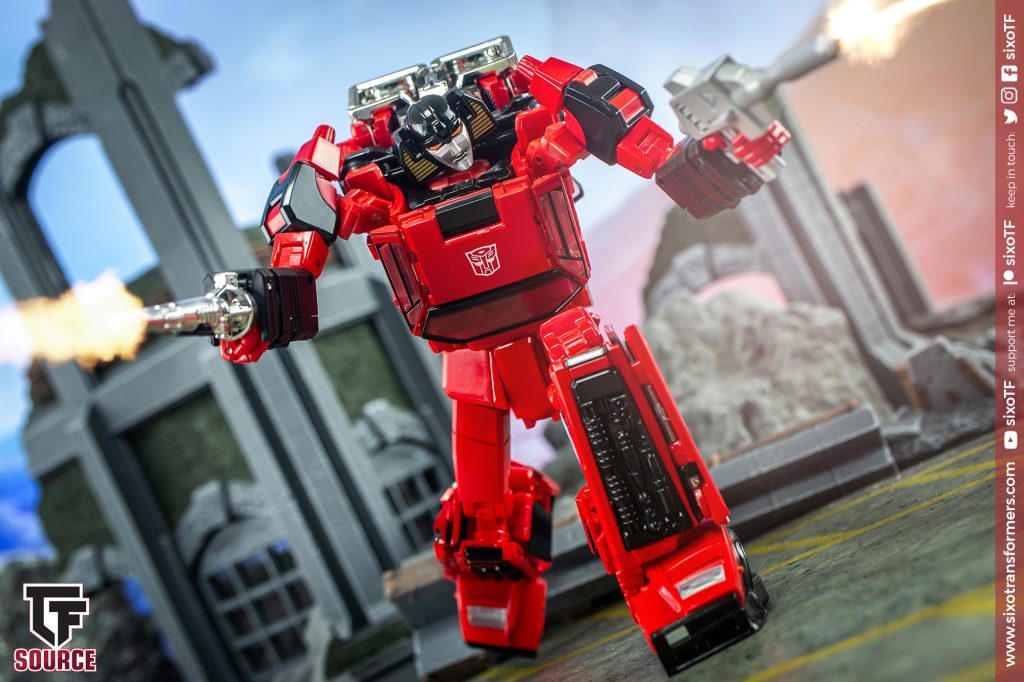 Anyway, all of this weaponry makes him great fun to play around with too, and he looks positively mean when armed up with two weapons of your choice! 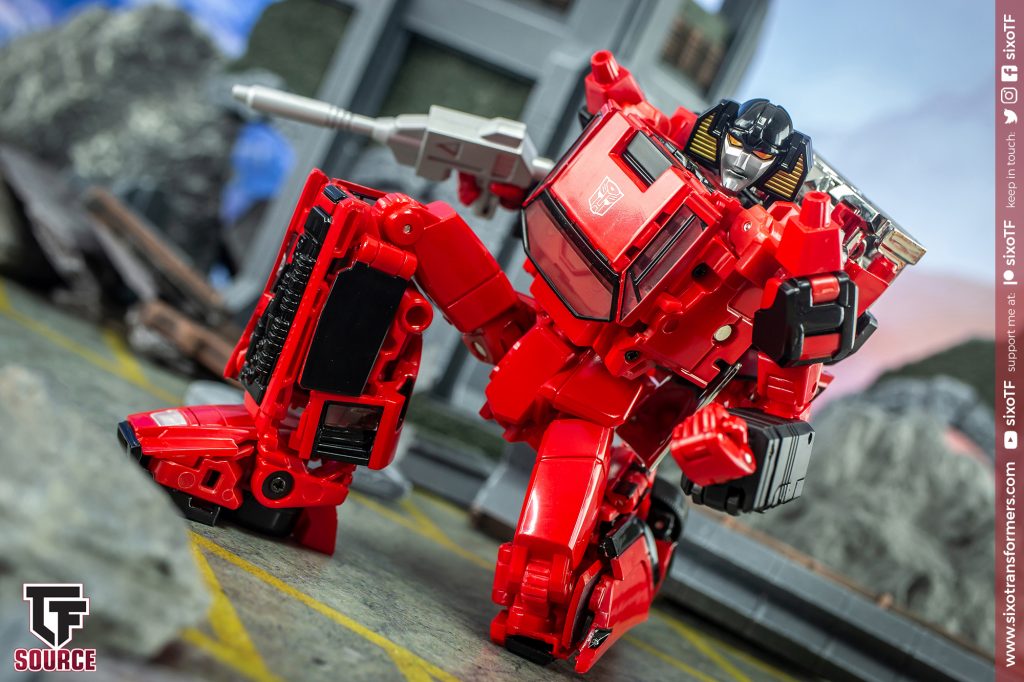 Overall then, there are plenty of nice things to say about ol’ Spinout here. He’s great to look at, very enjoyable to handle, and just generally feels like a quality purchase. Oh, and he’s a fantastic bit of representation for the very earliest toy related to the Transformers franchise, so what more could you want? 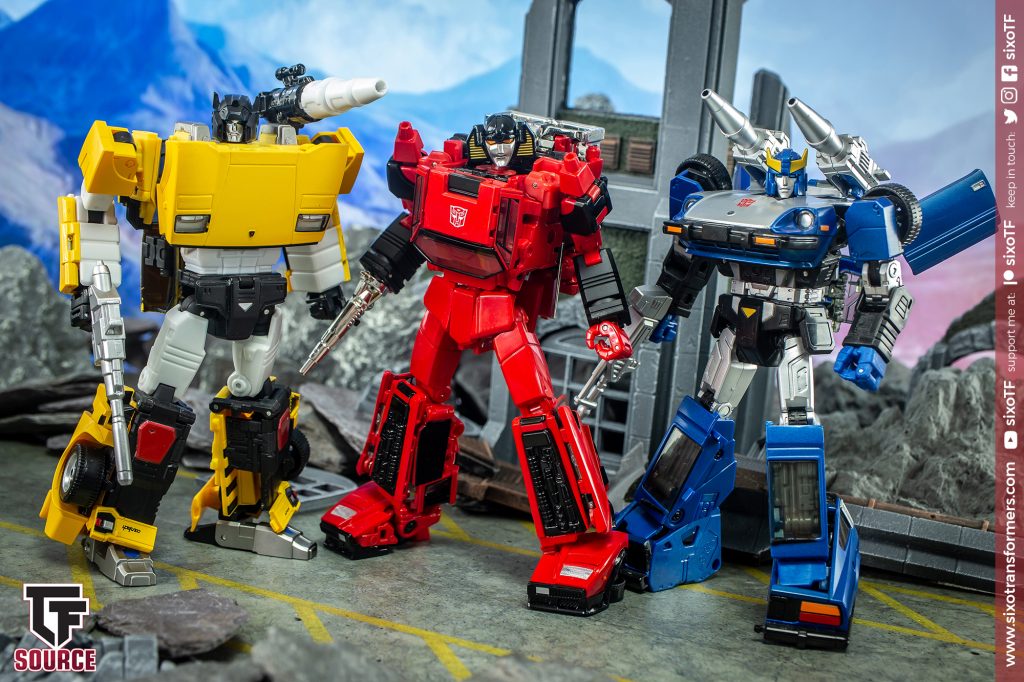 The other area where he excels is as part of a line-up of other Diaclone nods, of course. I mentioned last time how, after eight years of these releases, there are now precious few to go, meaning that the potential for a display is really quite remarkable already! 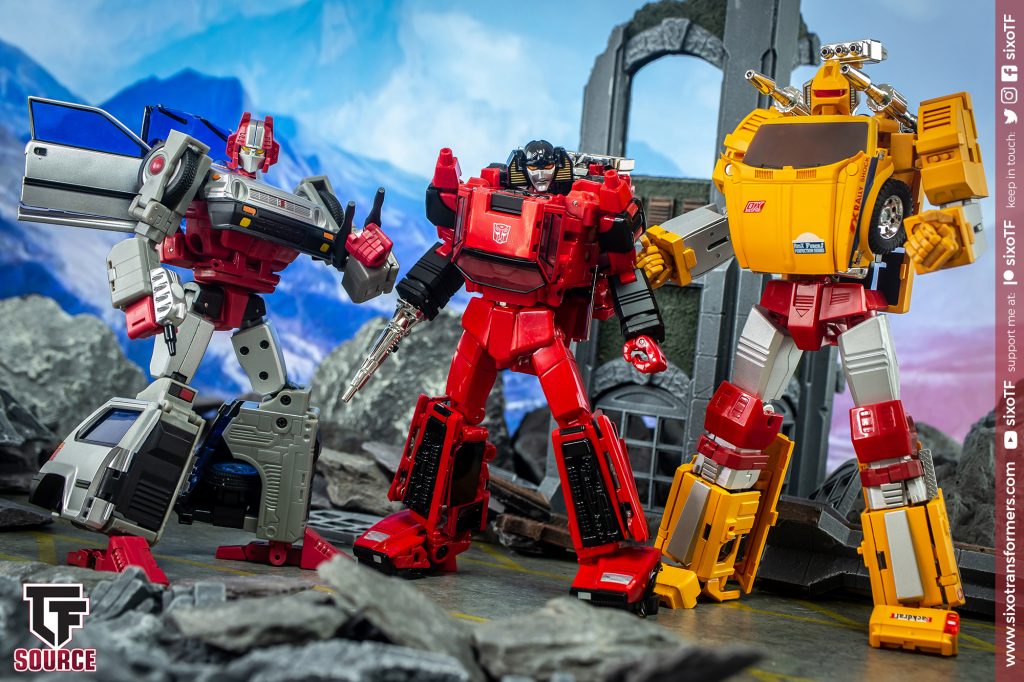 That’s not even taking into account some of the third party options out there, mind. Throw those in too and things really are coming along very well indeed. 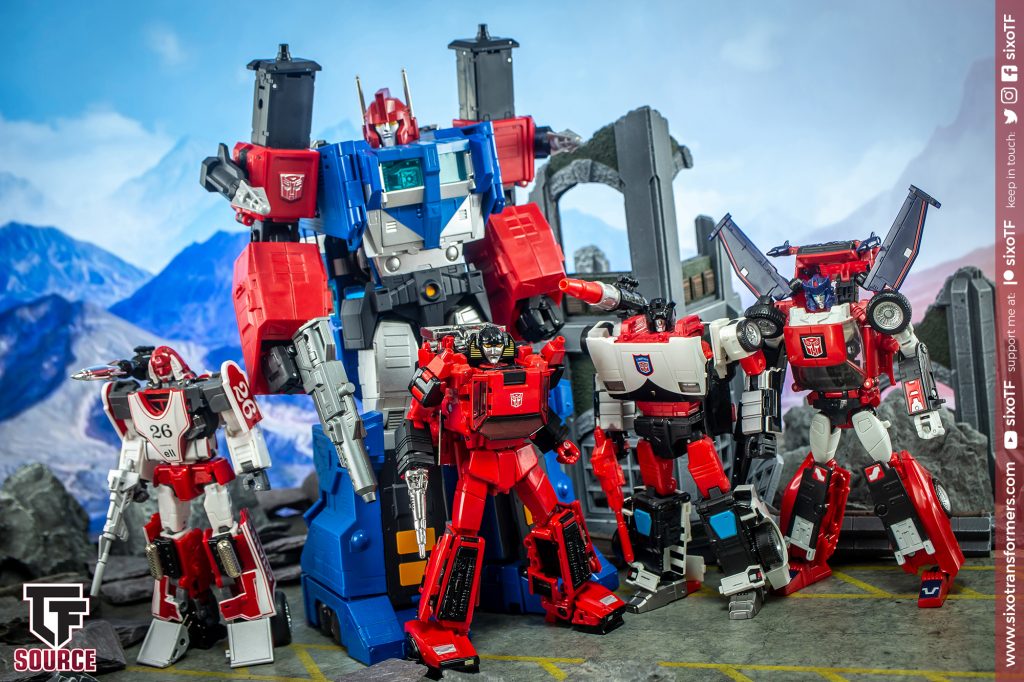 And being red, Spinout is a very welcome addition to the dominant colour scheme of such toys, too. It’s pure coincidence how it’s worked out, but it’s a nice theme all the same. 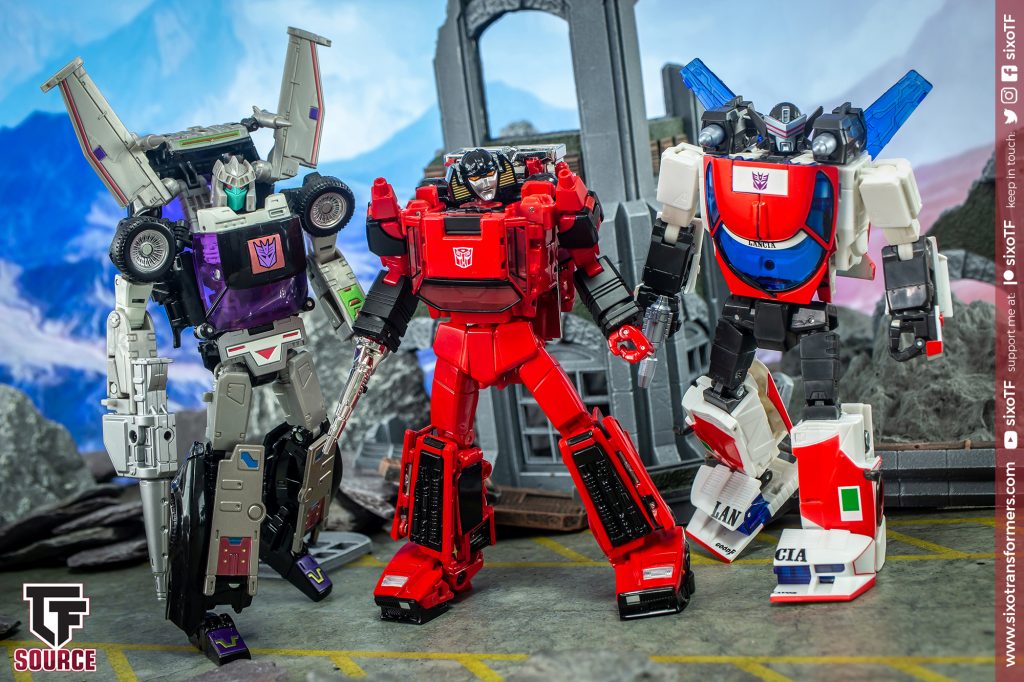 It’s great to see TakaraTomy bringing us another pre-TF nod too, especially as we’ve not had all that many of late, aside from Cordon. It was beginning to feel like the whole endeavour was slowing down somewhat, but Spinout is a strong return to form. 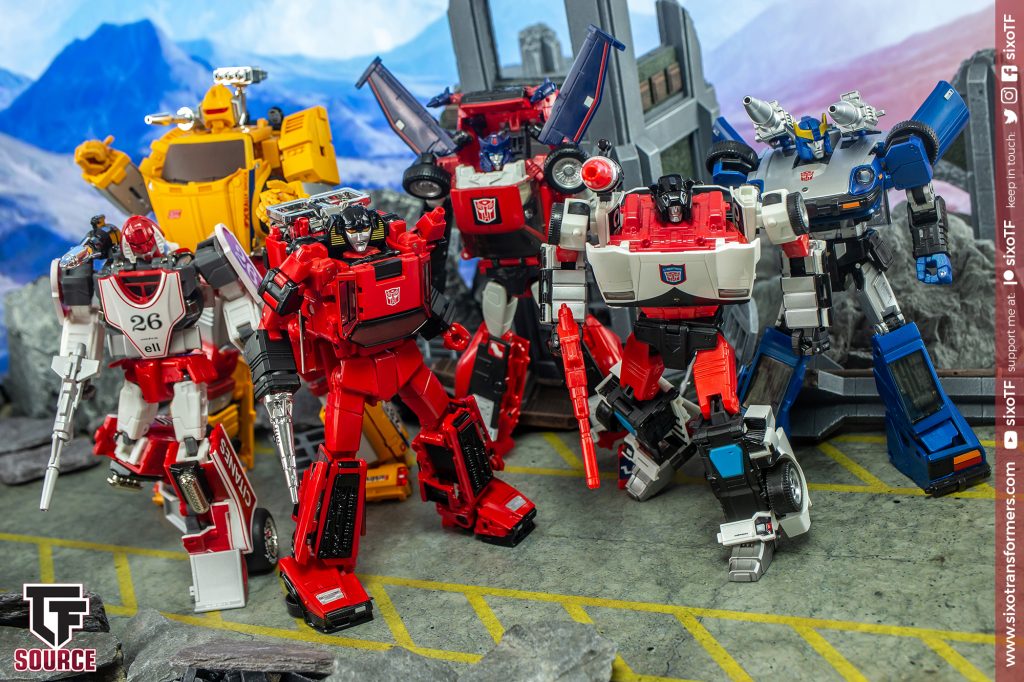 I think in a lot of ways, these have become some of my favourite and most-anticipated releases from the Masterpiece line, and it’s great to see them doing the red Countach such strong justice here. 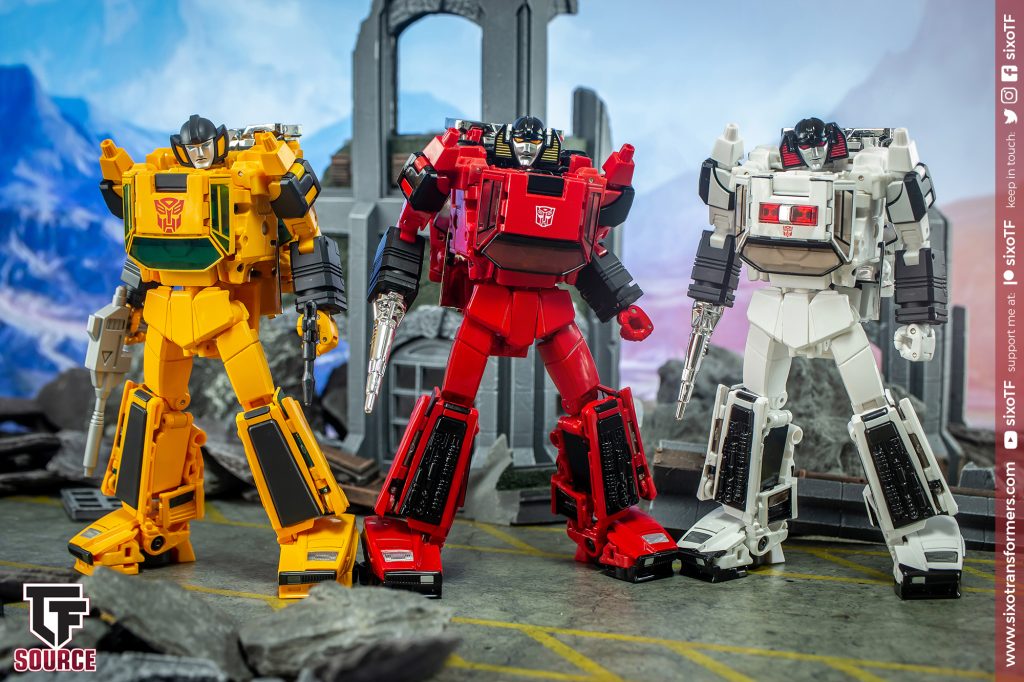 Mind you, whichever flavour of this design you decide on, there’s really no wrong way to go. It’s been fantastic stuff with each release ever since MP-39 first landed some four years ago. 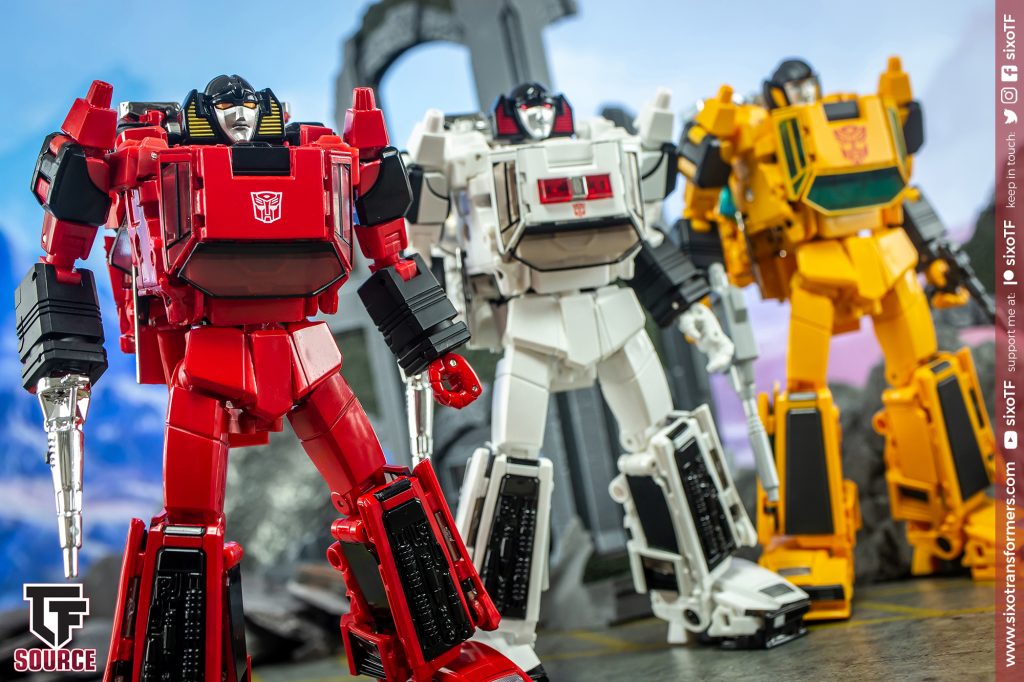 It remains perhaps my favourite of all the Masterpiece Carbot moulds overall, and it’s great to finally see all three versions realised and in hand at long last. 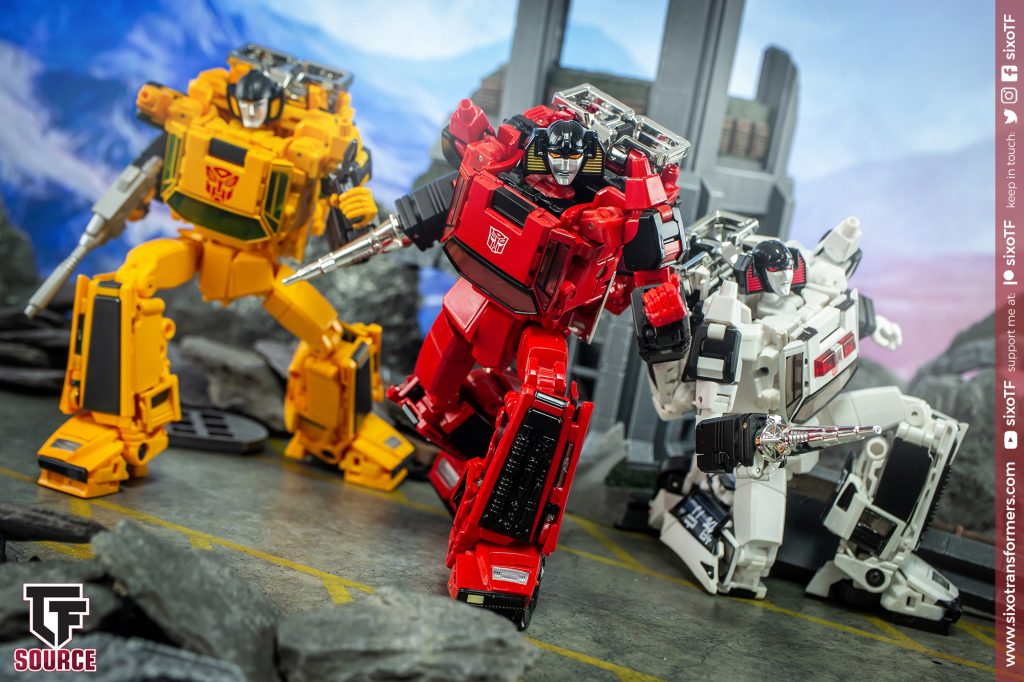 A dream come true in that respect then; it’s almost good enough to make your head spin.

WHAT’S HOT? Cracking vehicle mode, sublime robot form, fun (but fiddly) transformation between the two. A powerhouse of a design with some incredible modern engineering.

WHAT’S NOT? Not much! There’s, um… gee, there must be something… no?