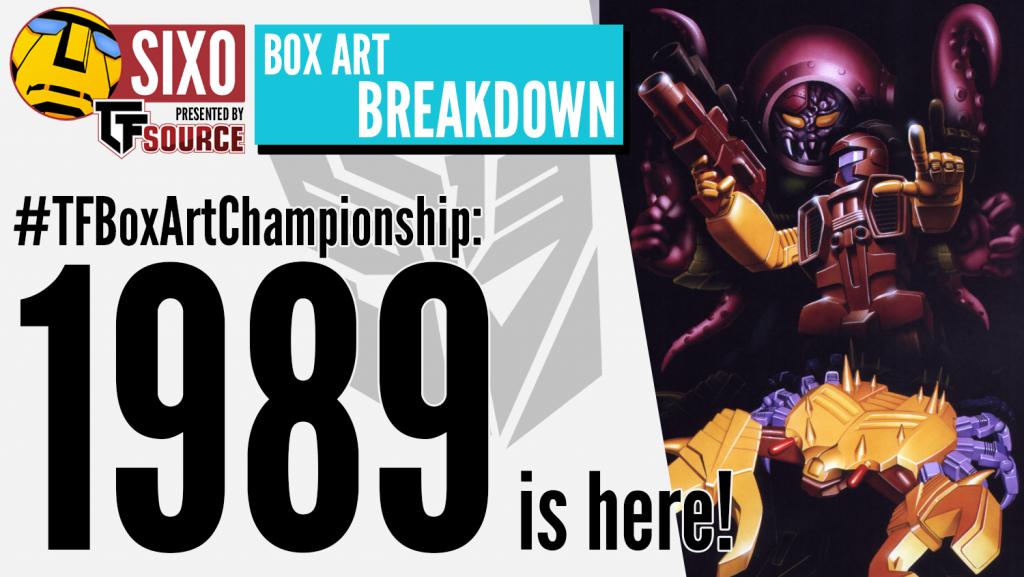 The rumours are true… the event you’ve all been waiting for has returned… yes, the Transformers Box Art Championship is finally back!

Wait, what? You mean you haven’t yet come across the best Twitter-based single-elimination tournament to use daily polls to help determine which three-decade-old Transformers toys had the best packaging artwork? Wow, it’s almost like that’s a super niche concept, or something.

Joking aside, if you really have never come across it all before then strap on in, as we’re just about to begin a whole new league, so it’s a perfect time to get acquainted. You can even read more about some of the previous leagues here, once you’re done.

So, what’s the deal?
Well, it all began as a way of having a bit of fun but also celebrating some of the wonderful packaging artwork from the Transformers toyline. Many of the character depictions found on the toy boxes represent fond memories for those of us who grew up in the 1980s with the original TF toyline, and fans who have discovered them since have found similar enjoyment. So a championship league was designed which features daily battles between two contenders in the form of a poll – simple!

The winner in each poll advances to the next round of the competition and takes on a new challenger another day. Eventually one contender beats all of the others and is crowned the winner for that year. The polls are typically run every week day (Monday to Friday) and last for 24 hours each, so there’s plenty of chance to get involved.

Who has the best box art in your opinion – HIGHBROW vs SCORPONOK? Vote using the poll in the next tweet…#TFBoxArtChampionship pic.twitter.com/rYGM6aHdWH

So I just judge each poll based on the art, or what?
A lot of people ask about the “criteria” for how they should be choosing a winner, and yes, it should primarily be based on the art. It’s natural that some characters speak to us more than others, and I do get a fair few comments asking if people are only voting for the popular characters, although the evidence doesn’t necessarily support that they are. You’ll note below that both Optimus Prime and Megatron, the two most recognisable Transformers of all time, were voted off in the second round of the 1984 competition, for example! At the end of the day though it’s supposed to be fun, so just vote however you want!

Does it ever end in a draw?
It’s seemingly impossible for it to, given the way Twitter’s poll system works, but we’ve come very close! There have been plenty of battles that could have swung either way until the last moment, and still ended almost in a dead heat!

It was intense, with a record 1.3k people voting across Twitter, FB & Insta, but in the end the big fish man claimed a narrow 54% victory!

Thanks to everyone for playing – it's been fun! pic.twitter.com/xjBD29g1VU

How long will this go on? Will you do beyond Generation 1?
It’ll carry on for as long as people enjoy it! There’s always potential to do Generation 2, Beast Wars, Machine Wars and beyond… so let’s see!

OK, I’m convinced – how do I follow the action?
You can check it out on Twitter either by following me, @SixoTF or checking out the hashtag #TFBoxArtChampionship to see the latest happenings. You will need a Twitter account to vote.

Right, now that we’ve covered off the basics, let’s have a quick reminder of all the action so far… 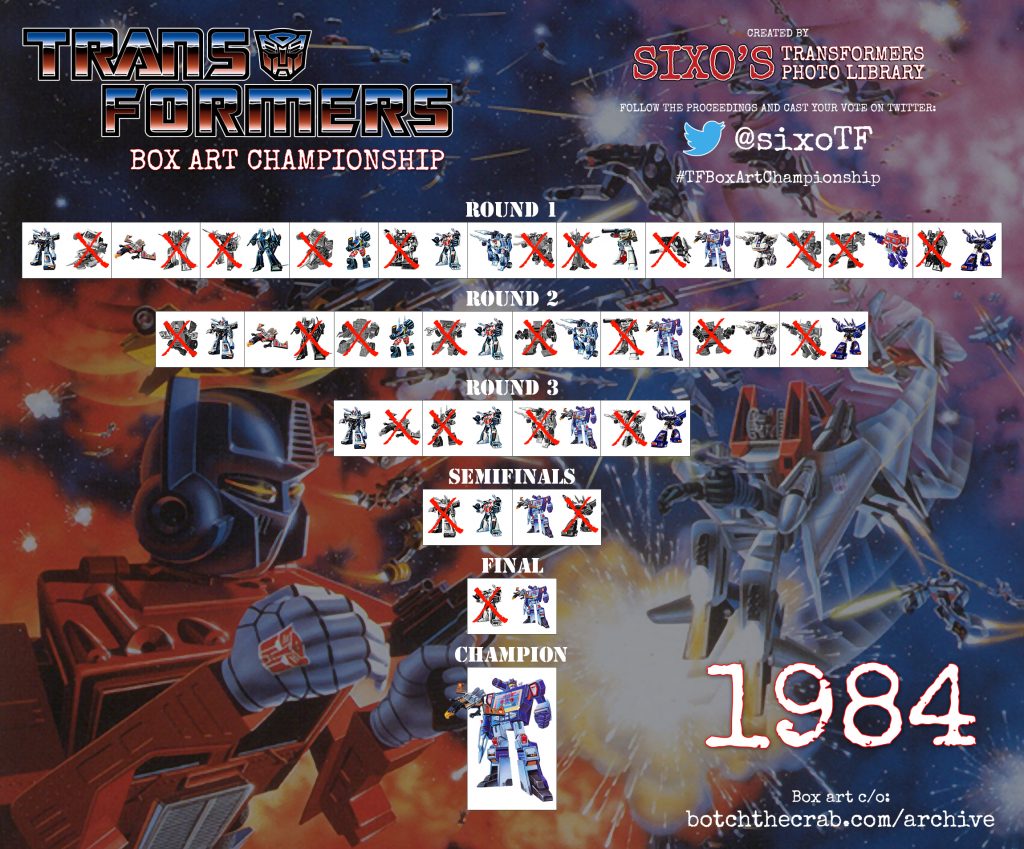 The first league of course featured some of the most iconic and recognisable names in Transformers history, so it was always going to be interesting to see who made it to the top! Soundwave was the ultimate champion, having survived five rounds against big hitters such as Ravage, Megatron, Mirage, Bluestreak and ultimately Wheeljack, in the final. That last round saw a peak in votes, with 596 people getting involved, although that number would be quickly surpassed on a regular in the subsequent league! 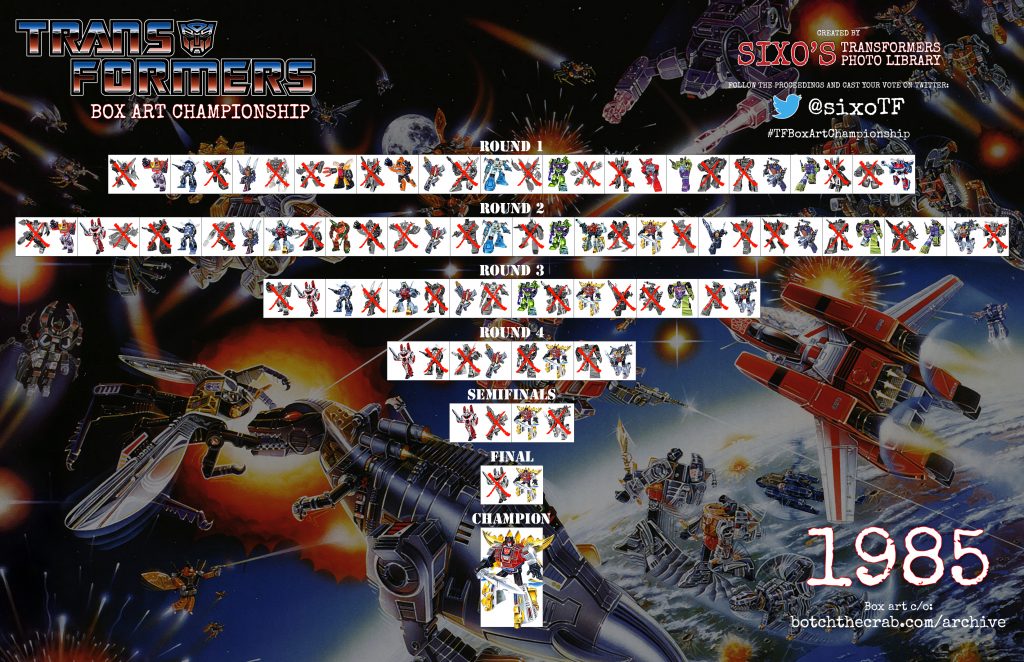 The second league brought in many more popular characters, including Dinobots and Constructicons, both of whom made a bit of an impact. However it was Jetfire’s art that really split opinion here, making it all the way through to the final despite many people rallying against it at any given opportunity (especially with a peak 721 votes in the semifinals)! It ended up being no match against Snarl though, who won the final with a decisive 64% in the end. 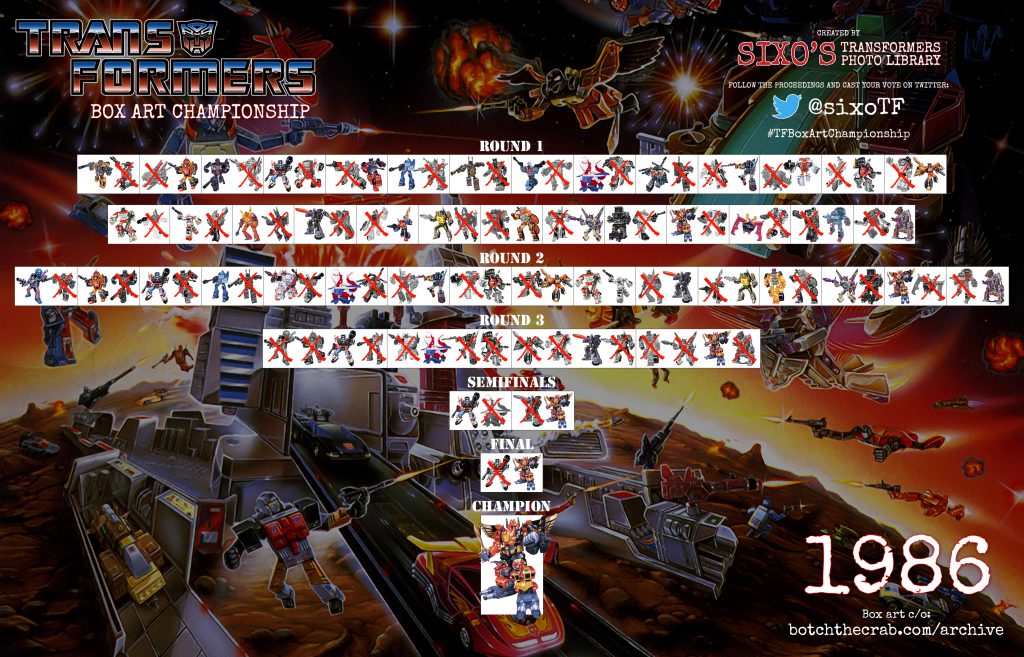 1986 was an… interesting year! Despite this league featuring numerous fan-favourite characters such as Hot Rod, Galvatron and many of the more popular combiners, the artwork itself was mixed to say the least. Chaps such as Ultra Magnus caused much hilarity for how they were so awkwardly portrayed, and to this day I still cannot tell you how it came to pass that Menasor made it into three rounds! In fact I think it says everything about the 1986 league that the voting peaked with 771 people tuning in just to vote off the decidedly dreadful Scourge artwork, which mustered just 11% of the ballot in round 1!

It all came good by the semifinals though, with four examples of incredible artwork battling it out for the top spot, and the final prize going to the impressive Predaking. 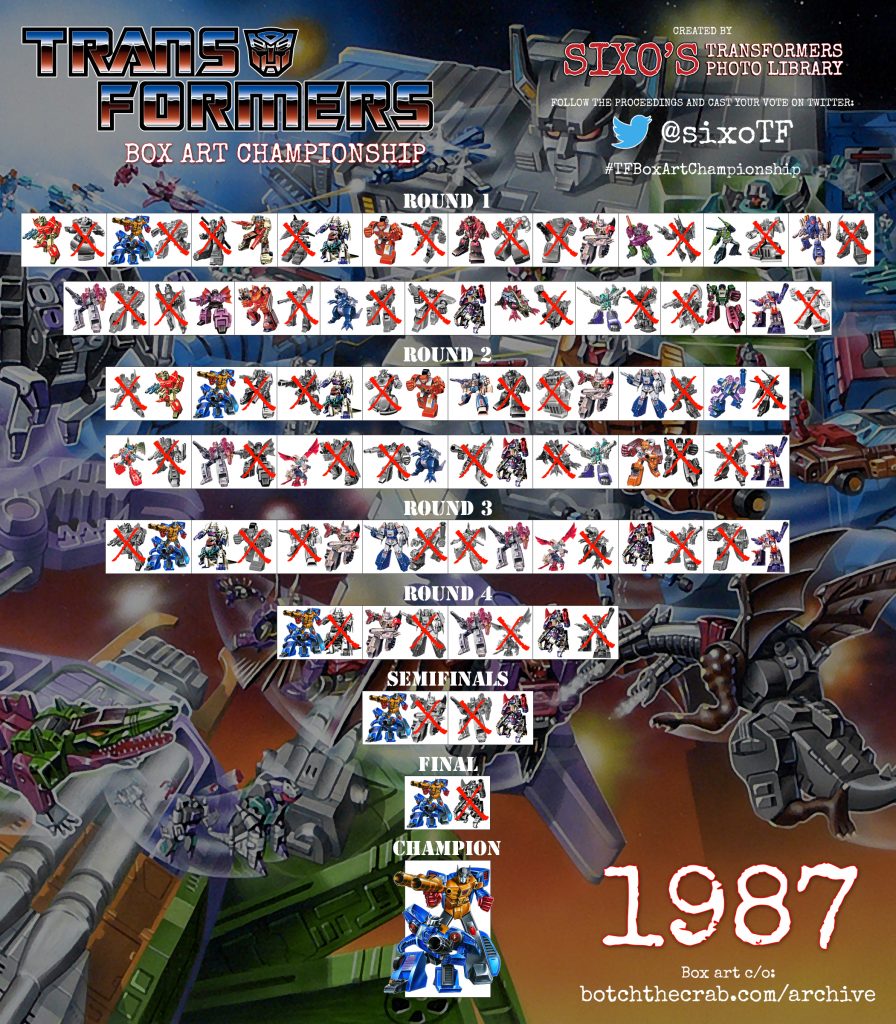 1987 was a bit of a fresh start in many regards, with an impressive new aesthetic on much of the artwork on display. Right out of the gate, the Headmasters and Targetmasters were commended for their stylish looks, which meant that there were some intense battles along the way! Despite some popular showings in Apeface, Doublecross and Hun-Gurrr, it was ultimately all about the double-whammy of Punch/ Counterpunch, who secured the title round with a definitive 62%. 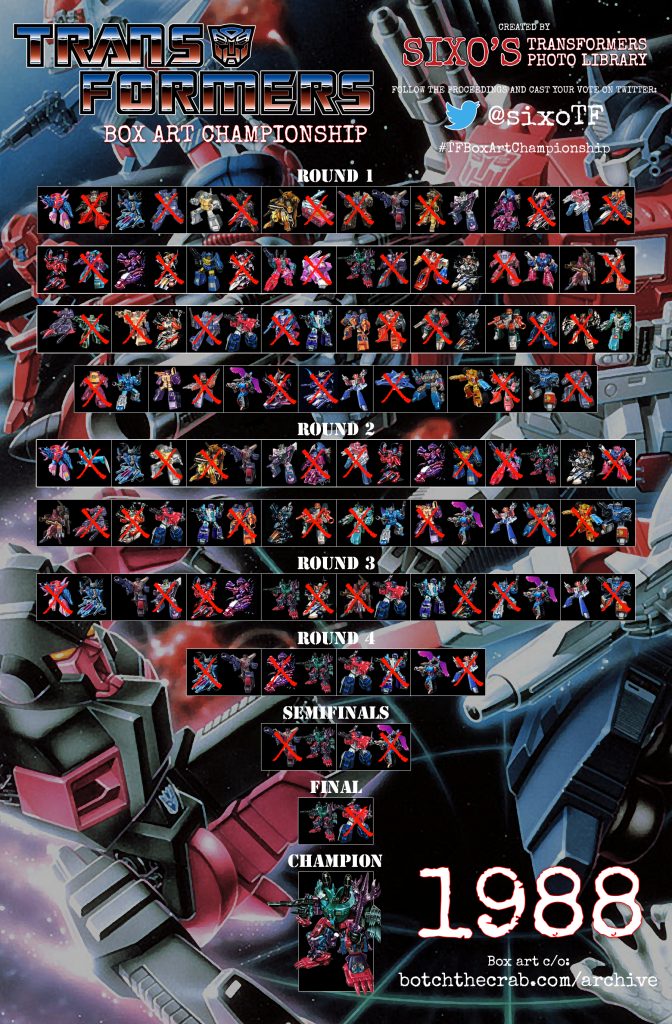 Which brings us to 1988, which I think was my personal favourite of the leagues thus far… with Pretenders and Powermasters entering the fray, there was a lot of diverse artwork on display and some really interesting mash-ups. Really though, it seemed from early on that it was always going to be about Powermaster Optimus Prime and Piranacon, as they both continued to dominate every round they featured in, before inevitably facing off in the final. With a championship record of 1330 votes, it was a close thing but the big fish man won out with 54% overall! 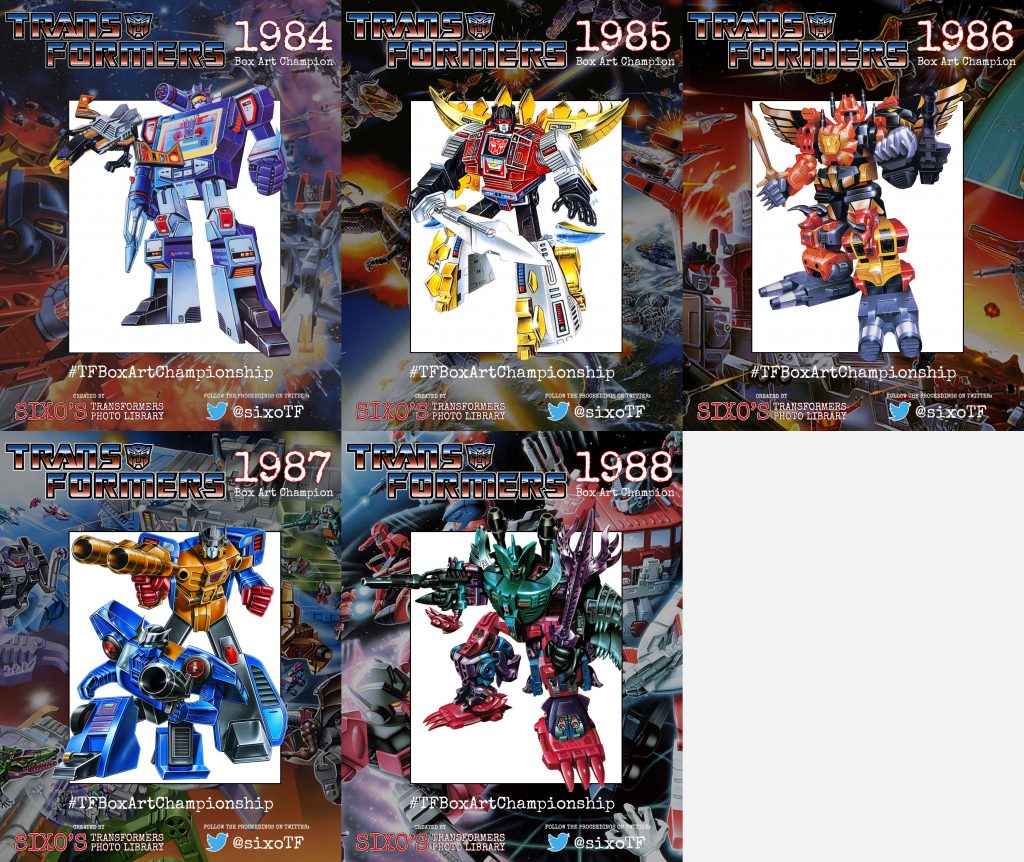 So, here are the five winners we’ve had so far! It’s fair to say it’s a relatively diverse bunch of characters, although perhaps the thing they do all have in common is clean lines, strong, definitive shapes, smooth shading and impressive colour schemes. They’re each of them worthy winners in their way, and it’ll be fascinating to see who ends up taking the sixth spot on this roster for the 1989 league…

…so let’s see who it could be!

1989 is here! Before we get to the battles themselves, we’ll be taking a quick look at each of the contenders in their respective subline categories. This year it’s all about Pretenders and Micromasters! 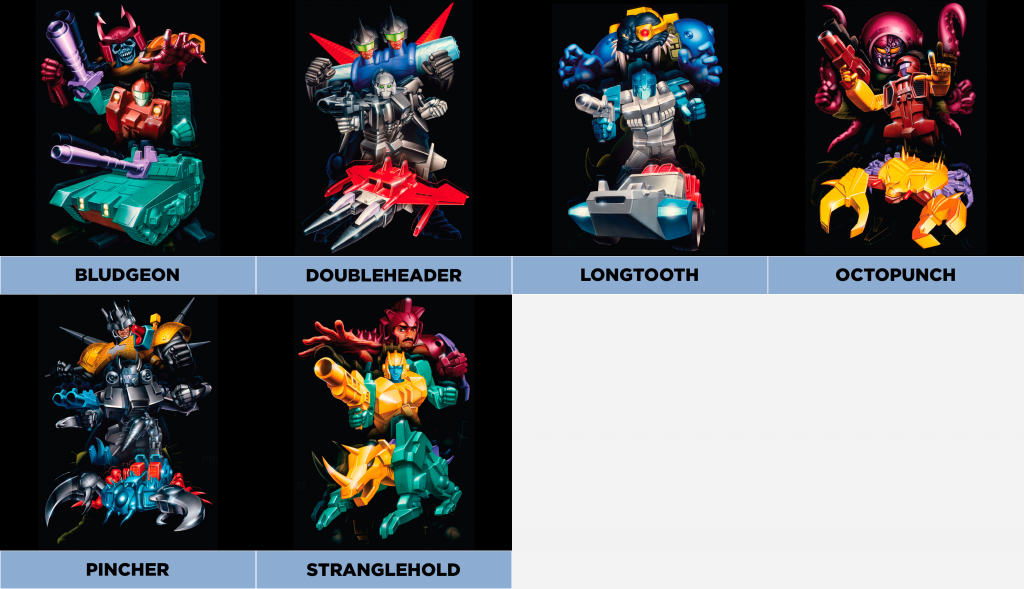 The second year of the gimmick brings some colourful characters into the mix, with recognisable names like Bludgeon potentially making for heavy hitters along the way. The Autobots are less well-known but still delightfully quirky, but for my money both Octopunch and Strangehold looks pretty swish here.

It was rare to see characters getting more than one toy in Generation 1, and these four were only the second instance of it happening after the memorable Powermaster Optimus Prime from the year prior. Will their celeb status be enough to boost their chances? Time will tell.

Mega Pretenders feature the additional gimmick of a transformable shell, meaning that there’s a lot going on in this artwork. Thunderwing is definitely the most well-known of this lot, but it will be interesting to see if that’s enough to carry him through the league.

As well as transformable shells, Ultra Pretenders also boast a larger vehicle shell too! They’re like the turduckens of Transformers. Oh, and that artwork certainly captures the attention, too, so it may just be enough to smash them through the ranks. 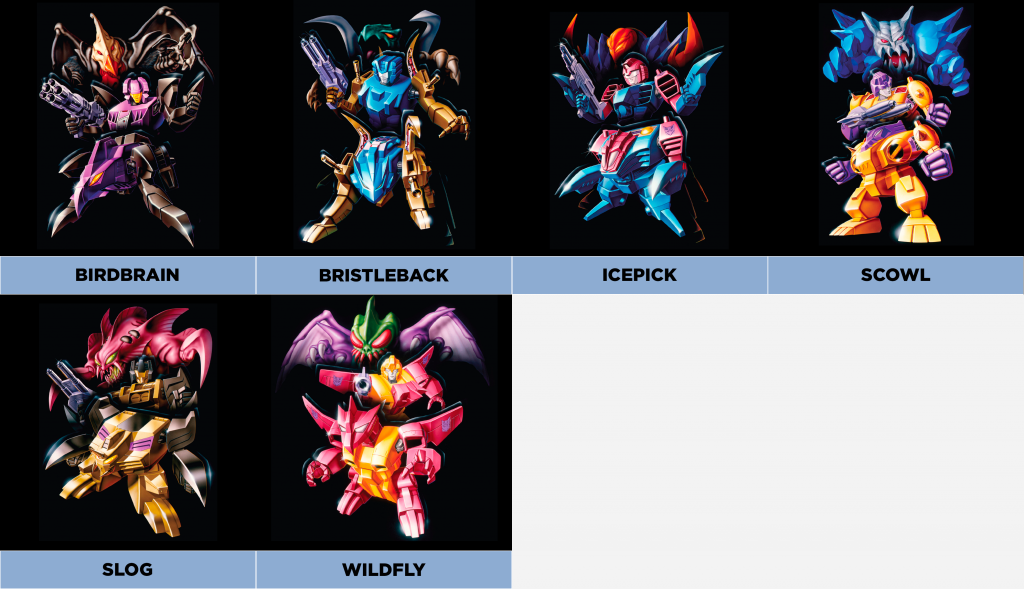 Our last category of Pretenders is also arguably the weirdest! The Pretender Monsters were tiny little toys but they certainly make a splash in illustrated form. Super colourful and with some real presence, I’d expect this lot to do pretty well this year. 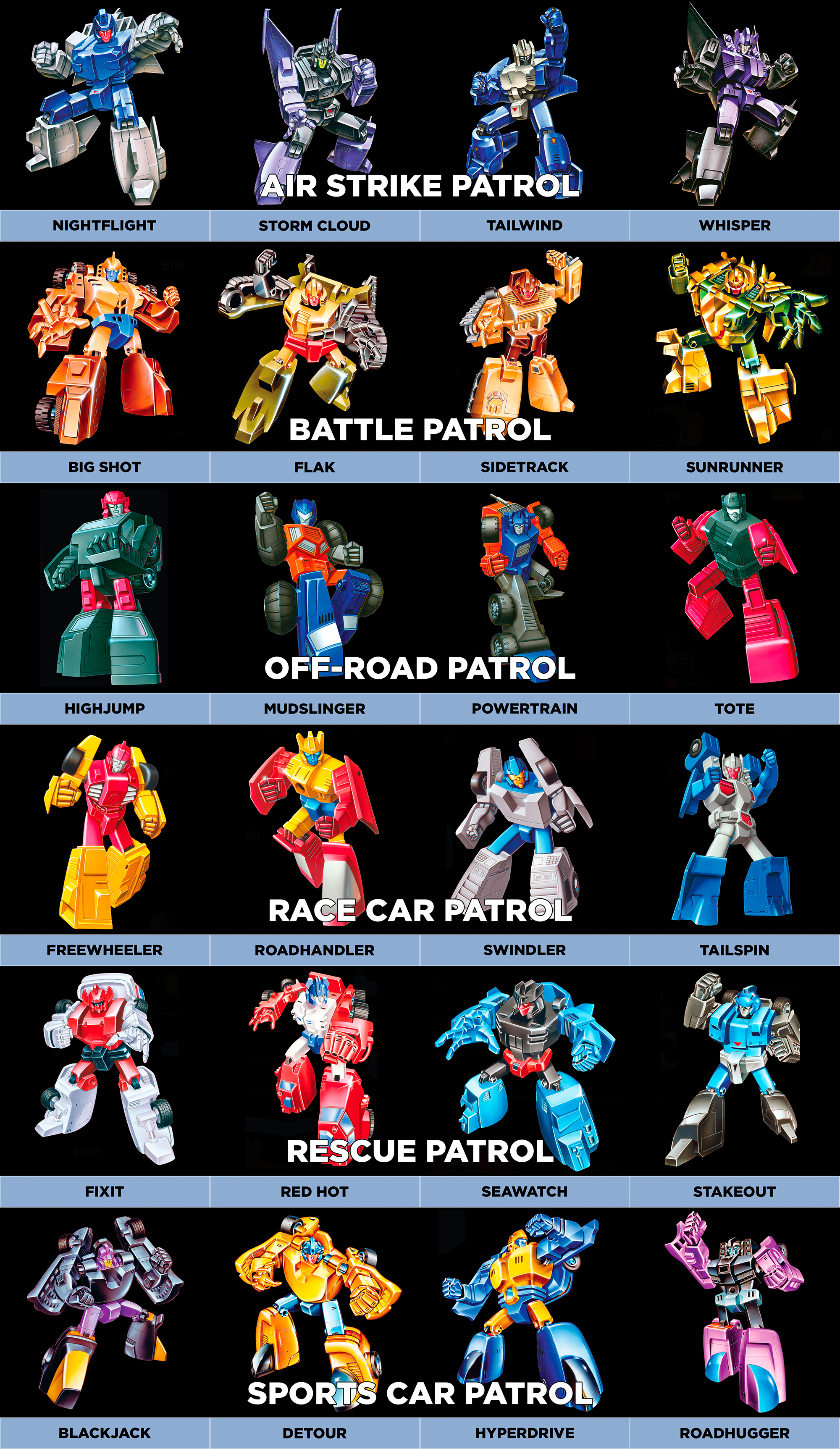 And here are the little guys! The bulk of the competition is definitely going to be dominated by Micromasters in 1989, with plenty of nostalgia on offer for fans who had these toys as kids, and some really impressive artwork to boot.

Although the Micromaster patrols are packaged together and thus feature collective box art, I’ve chosen to split them up as individuals for the sake of this competition.

Next up are the four Micromaster Stations, which are weaponised battle platforms. These have all been recently recreated in Generations Modulator form, so it’ll be fascinating to see if that helps their chances!

The Micromaster Transports may not be the most well-known as characters, although it’s fair to say that one example in this line-up has a name that at least lives on in infamy… let’s see how they fare against the rest of the ranking in 1989.

And finally, there are the big hitters of the little man world – the Micromaster Bases! These four are incredibly popular toys to this day, but will the artwork grab people’s attention?

In the case of both Countdown and Skystalker, they essentially have two pieces of artwork – the base and the Micromasters themselves, so they’ll be submitted together for the competition.

So, there we have it – the full list of 1989 contenders! At 58 characters in total that makes for a decent amount of competition. As always, the seeding has been randomly assigned using an online tournament generator (no favouritism here!), with a number of characters assigned “bye” status and automatically put into round 2 in order to make the numbers balance. 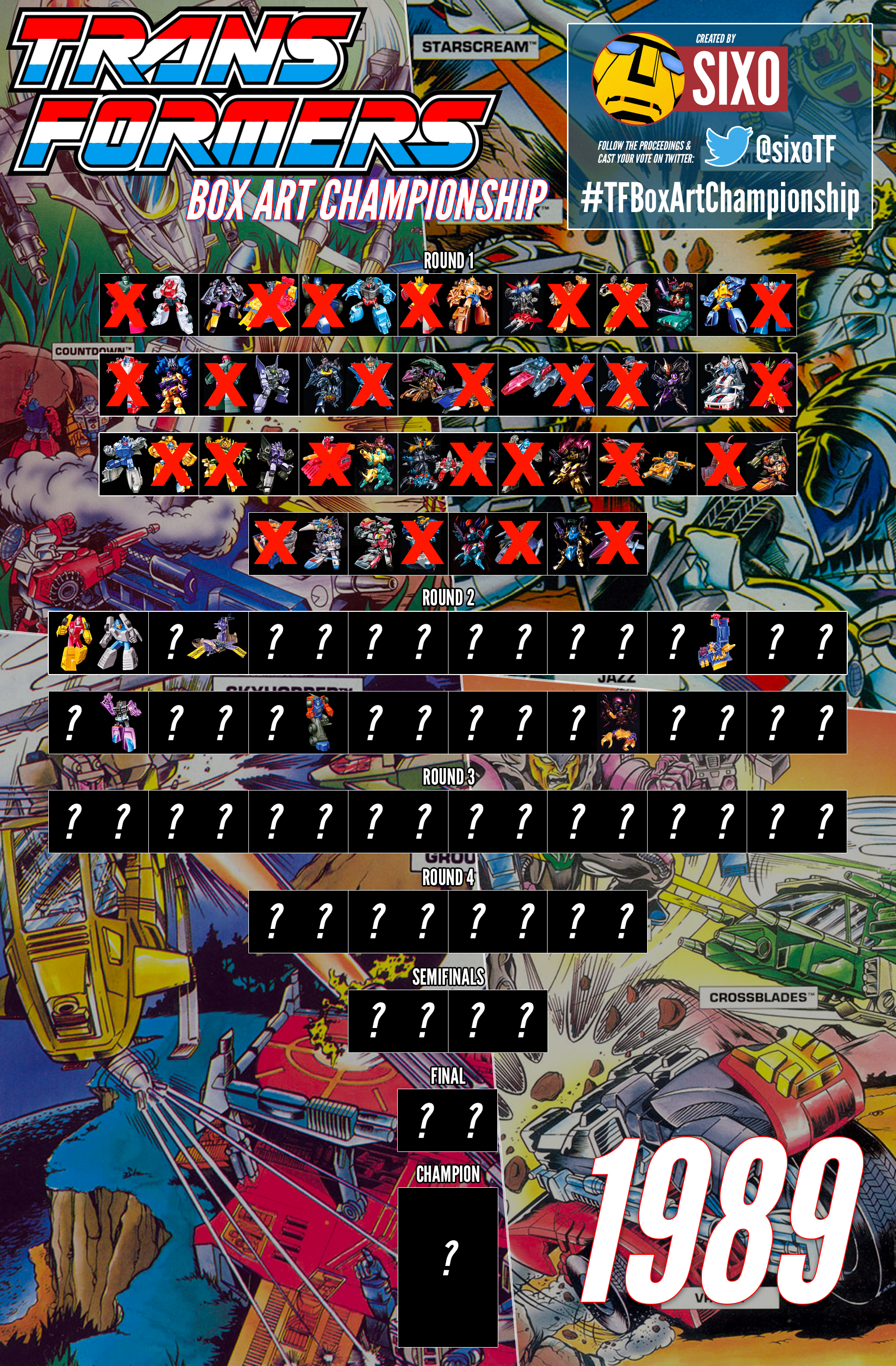 So there you have it! Start placing your bets as the first battle goes live on Twitter later today – just follow the hashtag, #TFBoxArtChampionship! Let battle commence…