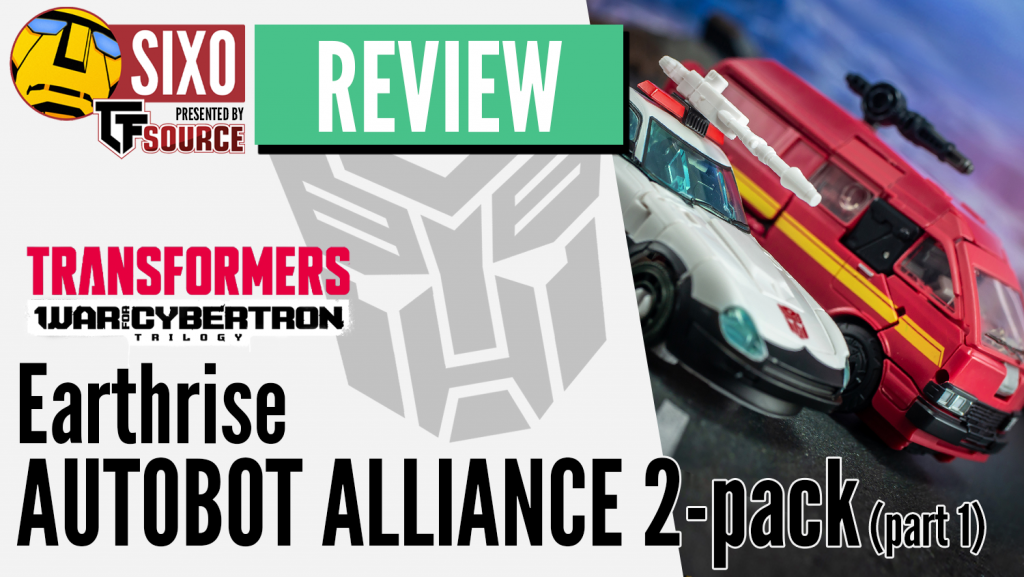 I need to reiterate something important: I don’t collect Generations toys. 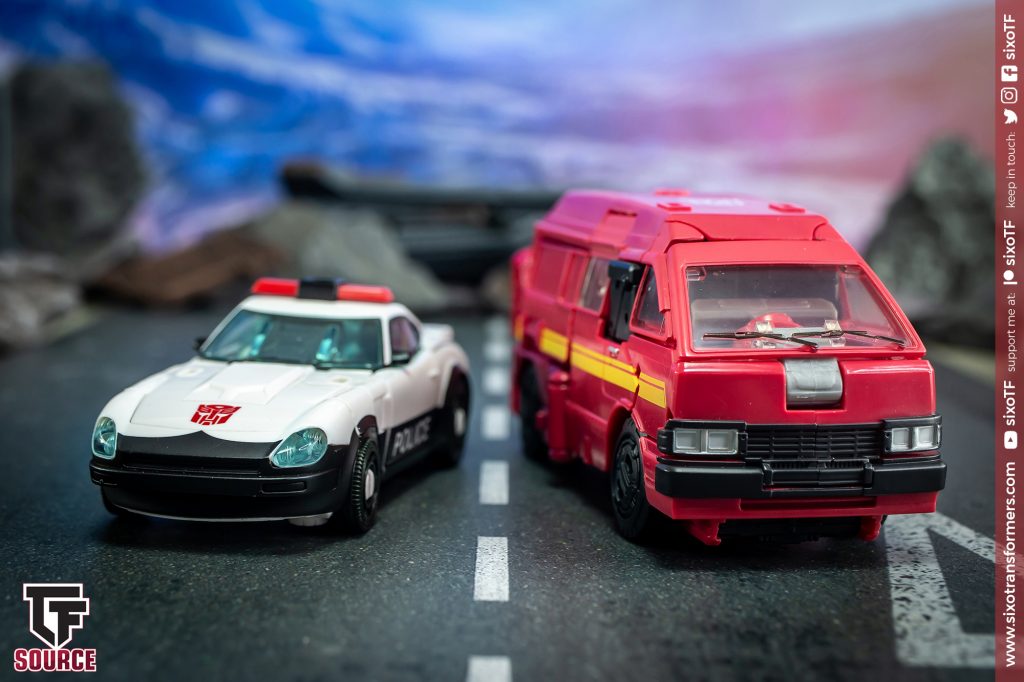 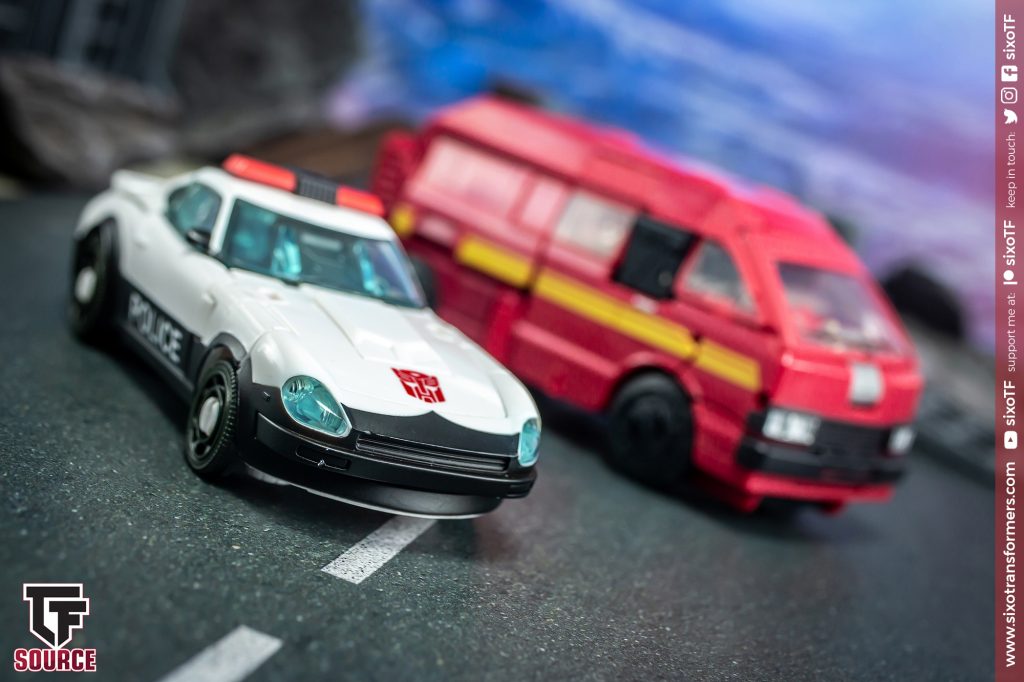 Joking aside, I’ve long been told about the wonders of modern mainline toys from folks online, so of course, at some point, I was bound to want to check what all the fuss was about, wasn’t I? That said, there is no plan to suddenly fill my home with such specimens, although I am definitely up for the idea of examining one or two of the more recent Earthrise examples. If nothing else, I was curious if they might scratch a particular type of itch. 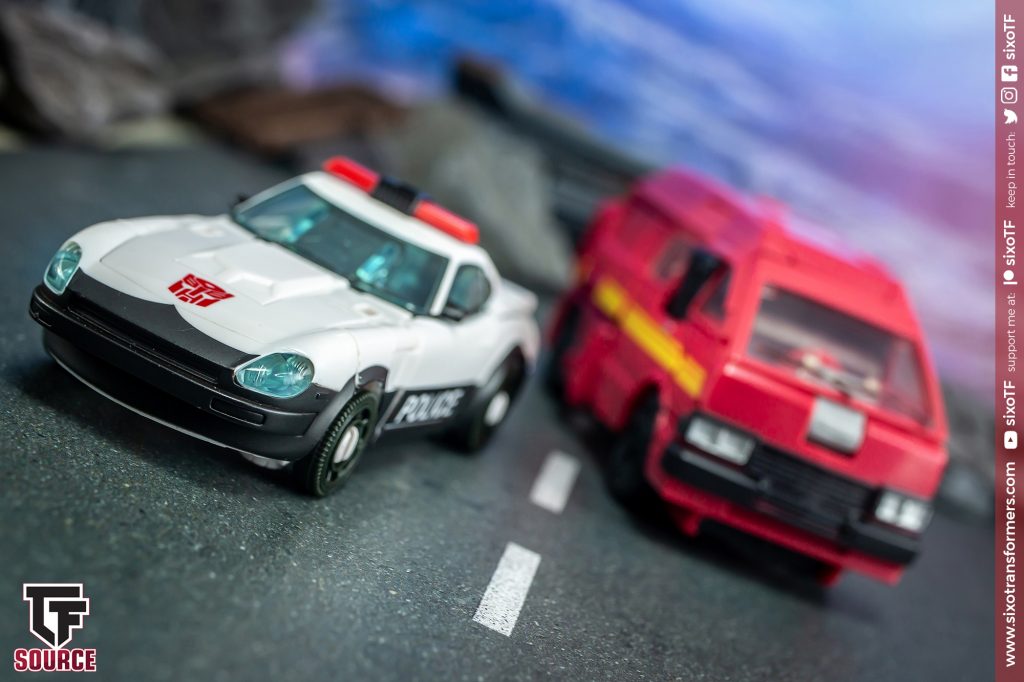 I’m talking about the joy of having nicely-designed but fun and simple toys to mess around with during a quiet moment or two. You know what I mean: so-called “fiddle-formers”. The kind of toys you can pick up at a moment’s notice, quickly concert between modes, have a little play with, then pop down again. Job done! 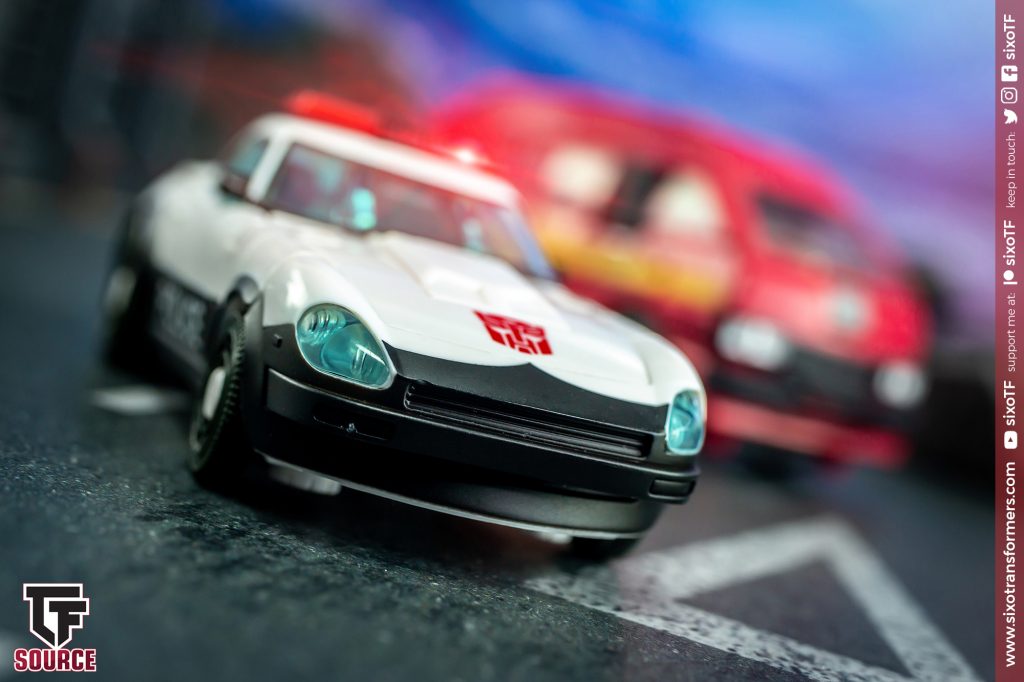 With so much of my collection being made up of Masterpiece-styled stuff (which can err on the more intricate side of things) and vintage ‘bots (which often require a bit of care to handle), I was interested to see if the Earthrise crew could bring a new kind of joy and satisfy in those moments when all you want to do is have a little fumble. I think what most intrigued me was the idea of that satisfying ‘click-clack’ of transformation without necessarily needing to puzzle over which piece goes where. Let’s see if that’s what I got! 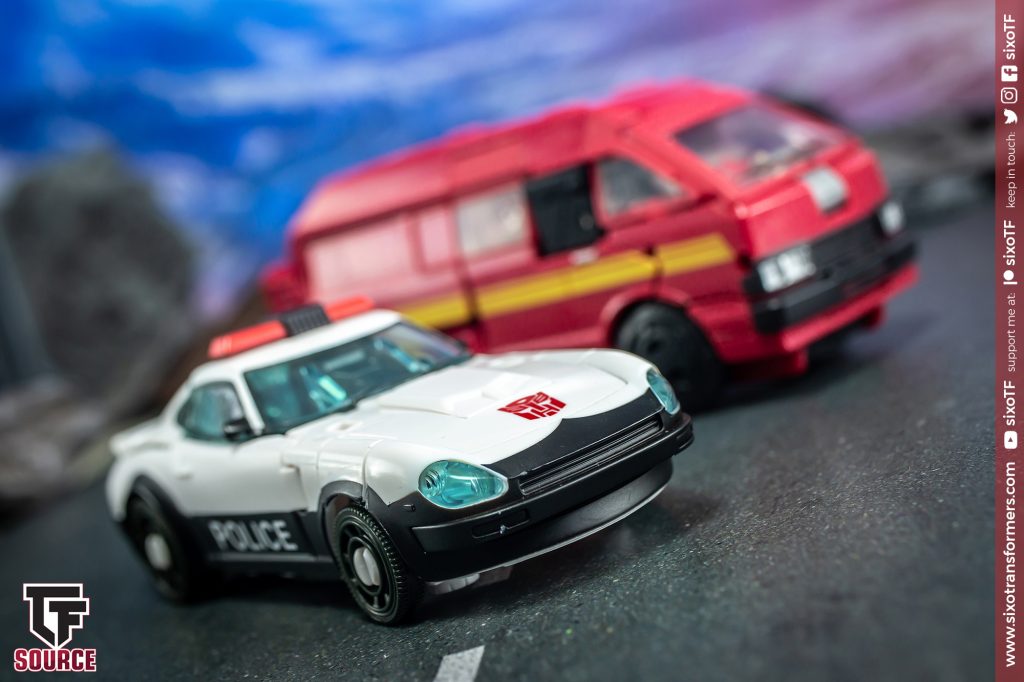 Which brings us on neatly to these two. Released as a 2-pack, this ‘Autobot Alliance’ pair have become notoriously difficult for many collectors to find, and are already fetching high prices on the aftermarket. That’s unfortunate, but given the character choices involved, it’s perhaps not surprising that people would want to have them in their collection, either. After all, both Prowl and Ironhide are franchise mainstays, and the new toys certainly do present well enough to begin with. 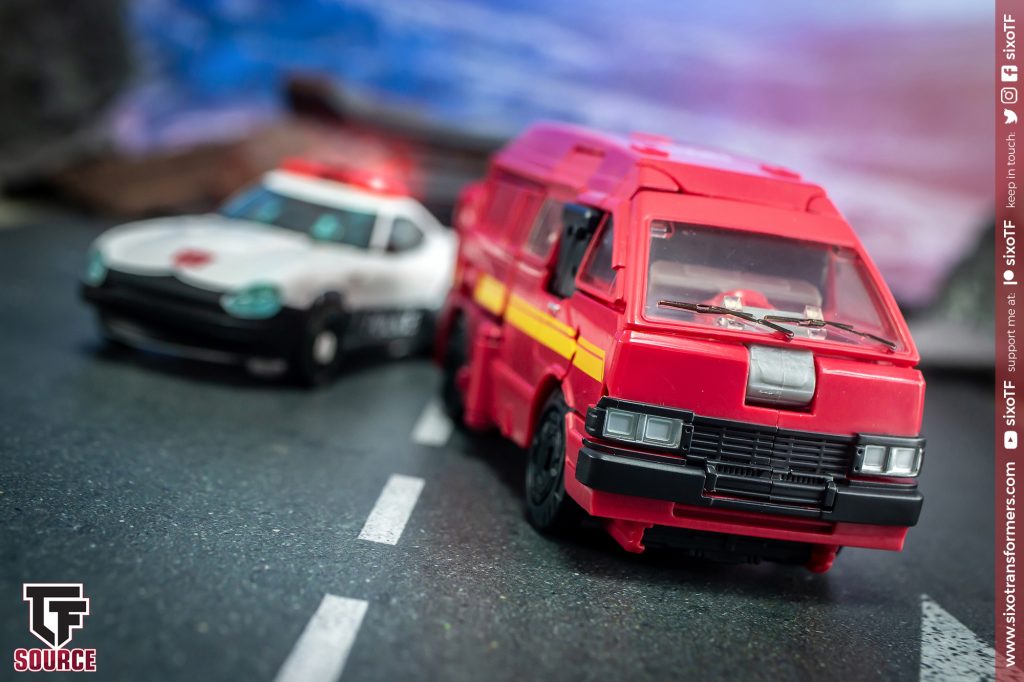 Looking at them individually in vehicle mode, they do a good job at showcasing the characters in classic form, both presenting in such familiar guise that you’re immediately in no doubt who they’re meant to be. 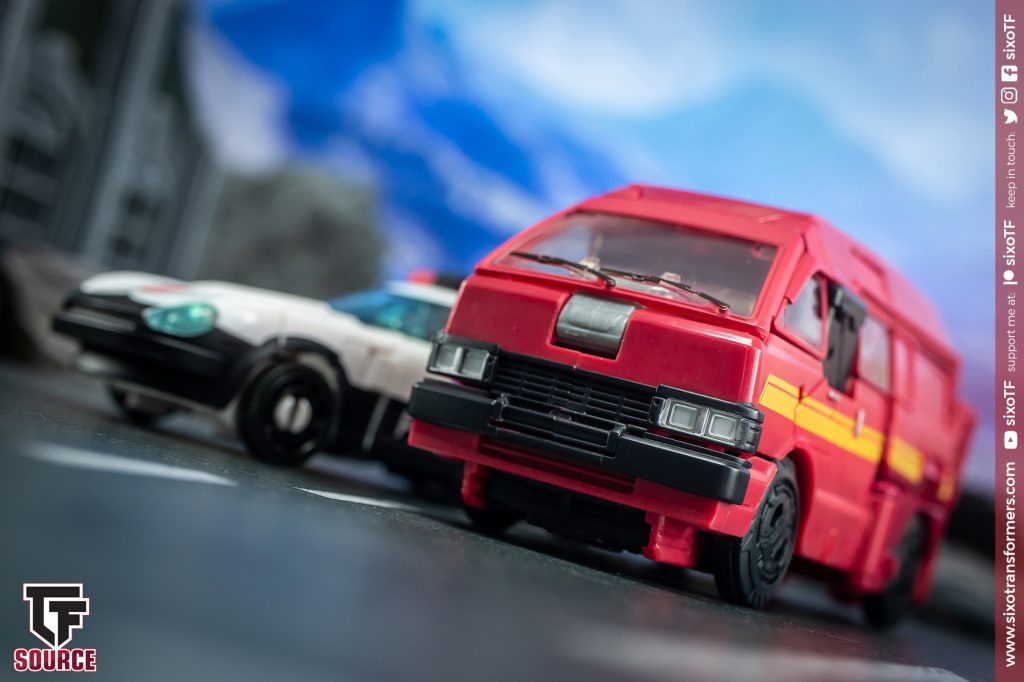 Ironhide is nicely boxy and features the requisite yellow yellow stripe down the side. The proportions of this van are a little more modern that his classic look, but it really works and I think in that regard looks good on the whole. 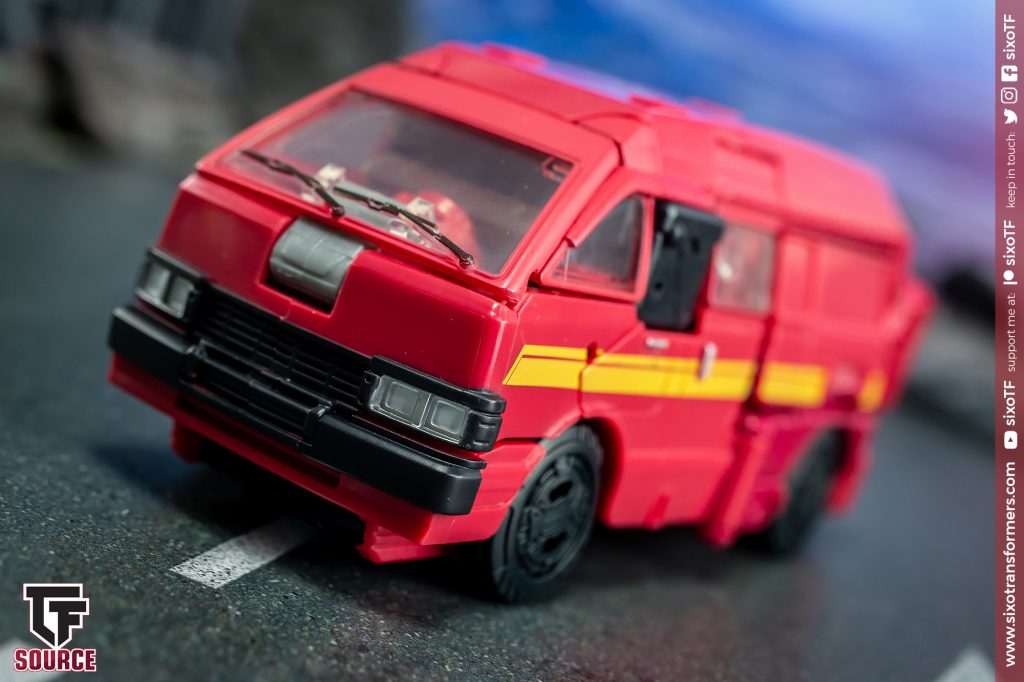 What’s slightly more unfortunate and quite immediately apparent is how poorly everything lines up. The roof section (which is formed from a separate piece here, but more on that later) seemingly never wants to sit flush and has a habit of squishing up a bit towards the back. 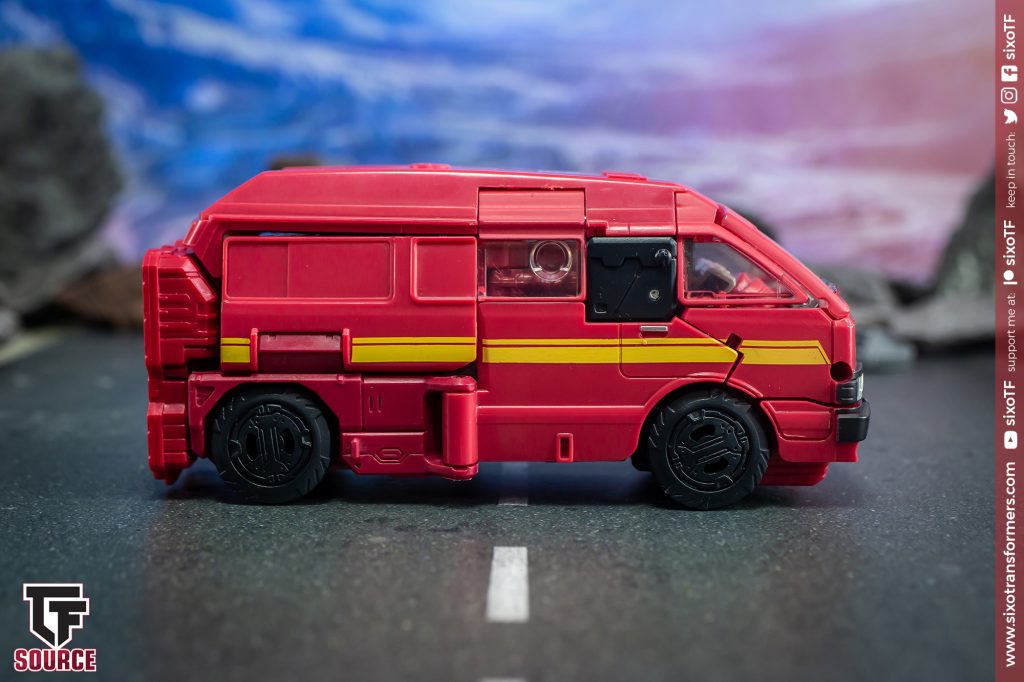 Then the whole look falls apart quite considerably once you turn your attention to the rear itself. Yep, that’s a big ol’ pair of feet just hanging off the back, there! It’s one of those oddities which I suppose needs to be hand-waved away a little, as if being able to enjoy an alternate form like this just requires you to accept this level of compromise, somehow. It’s fair to say that’s a sizeable dose of compromise though. 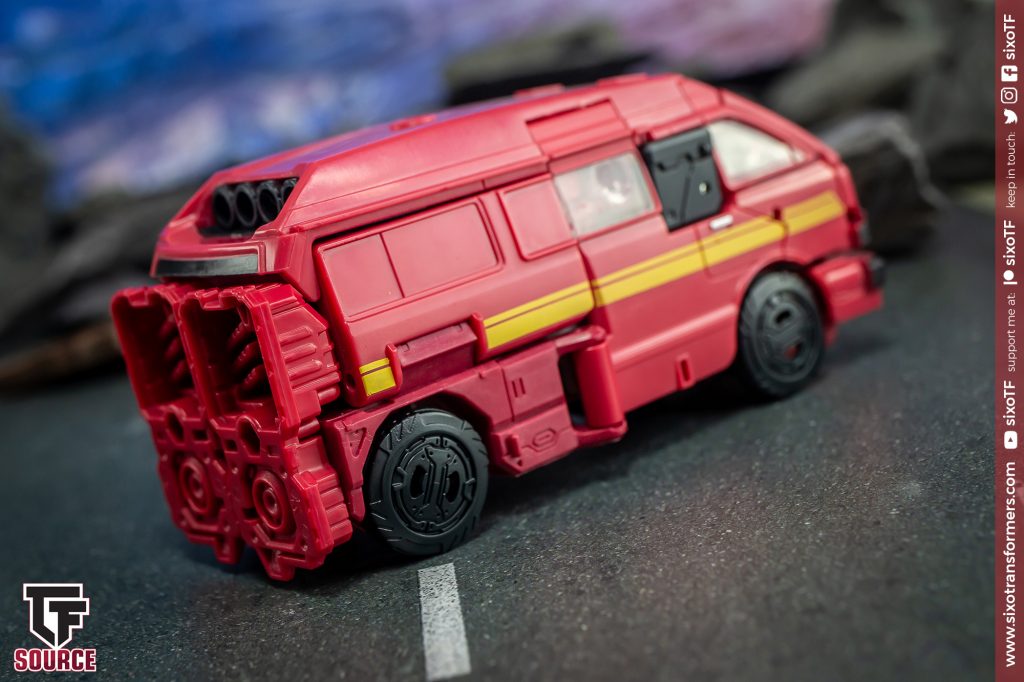 Whilst design elements such as the feet were anticipated, I’m also sad to report that the finish on Ironhide feels decidedly lacklustre, too. The unpainted red is no surprise unto itself but the look of the plastic is highly drab and comes off as painfully cheap in hand. Again, there are allowances that need to be made for the price point of toy that we’re talking about here, but even with that in mind, I don’t think this guy quite immediately presents as being up to par in many ways. 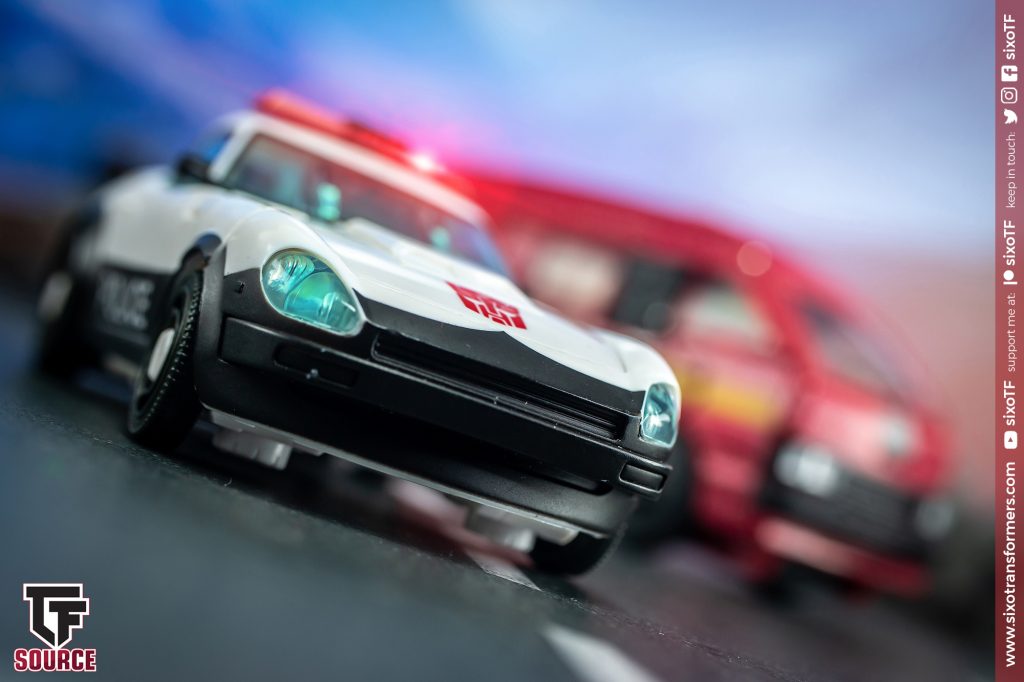 Over to Prowl, who right off the bat makes a good case for being my favourite of the too, and that’s not just on account of me being underwhelmed by his pack-in comrade. The police car form looks extremely tidy from all angles and presents well thanks to some popping red highlights and that eye-catching clear blue windshield. 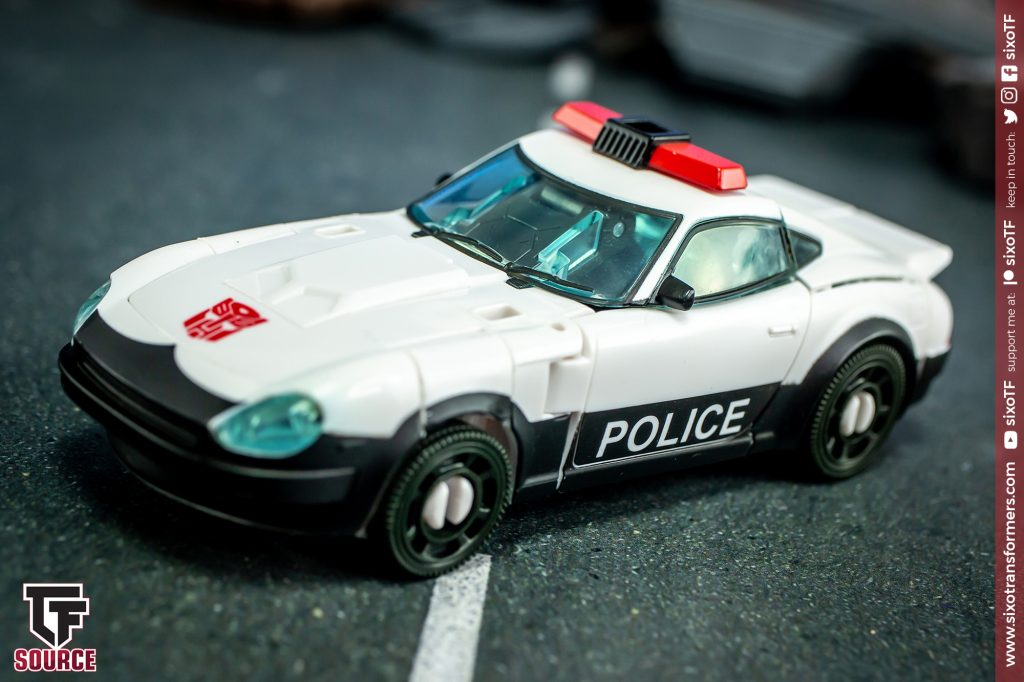 And when I talk about compromise, that’s why stuff like the peg-on wheels isn’t such a big issue for me. They don’t look great, but at least it’s the kind of thing I sort of expected. That said, it is still a shame to not see the same level of finish that adorned many of the ‘mainline’ Transformers toys from years gone by (there’s nothing here to rival the rubber tyres, stunning paint or cold diecast feel of the original releases, nor indeed the chrome and intricately-moulded detailing of latter examples from Beast Wars or Car Robots, for example), but I suppose those allowances must be made. 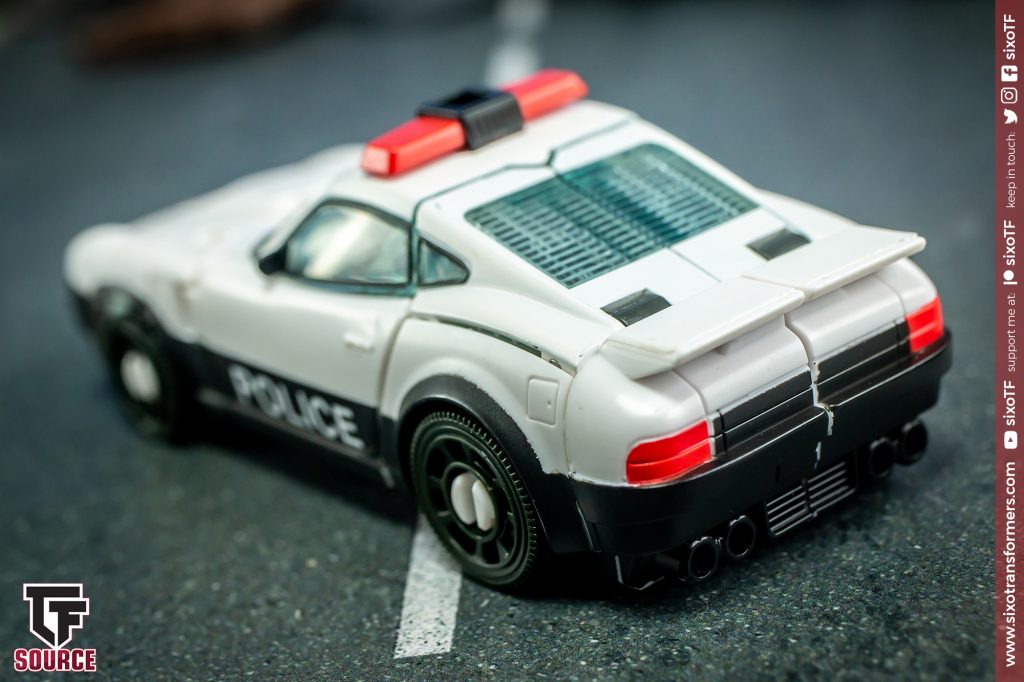 What is quite unforgivable here though is how poorly everything fits together. The car mode refuses to tab nicely and sits in a constant state of wanting to burst apart at the seams, with any given panel having the potential to pop out of place at a moment’s notice. The doors are the worst bit by far, as acutely demonstrated here…

I’ve had a couple of people suggesting hints & tips on how to achieve a better result, but needless to say this isn’t at all what I was hoping for from this delve into mainline territory. The satisfyingly simple execution I dreamt of didn’t include having to mangle these things back into a cohesive form whenever you pick them up, somehow. 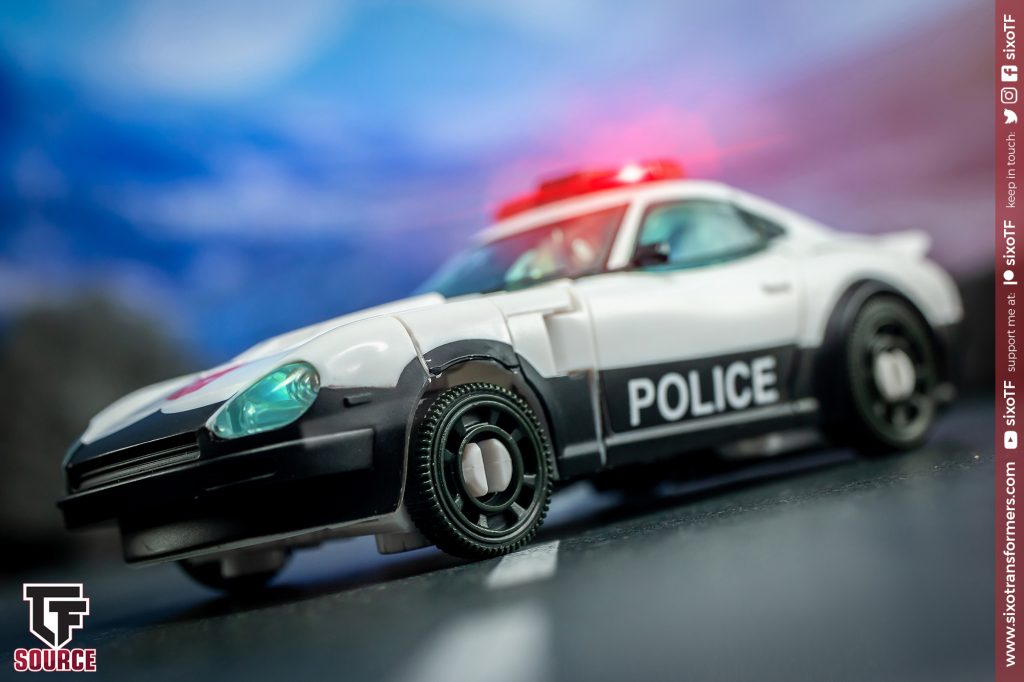 Grumbles aside, I’d be hard-pushed not to tell you that there isn’t still some charm to Prowl’s vehicle mode in terms of shape and overall presentation, although I do also have some nervousness about scuffing of paint and the sheer volume of translucent plastic that is coursing through the entire toy, but we’ll get onto that more soon enough. 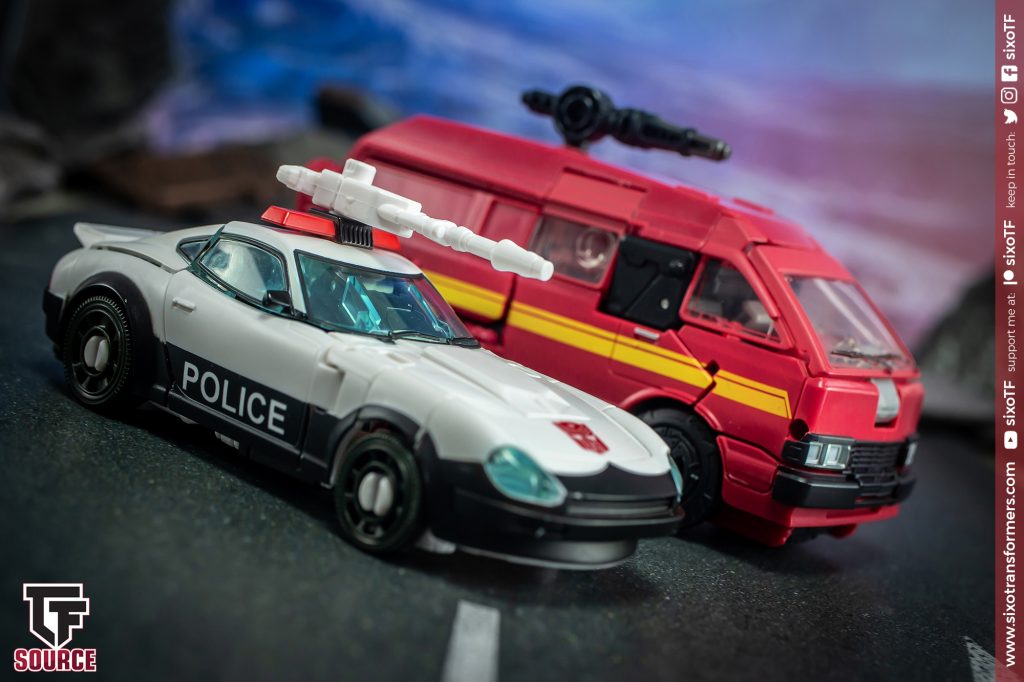 This really wasn’t meant to be a whinge-fest, mind, and none of it is to say that there aren’t some positives to be had about this set. They certainly do a good-enough job at representing both characters in many ways, but I’d be lying if I said that the overall fit and finish on both toys doesn’t feel a bit wanting, to say the least. 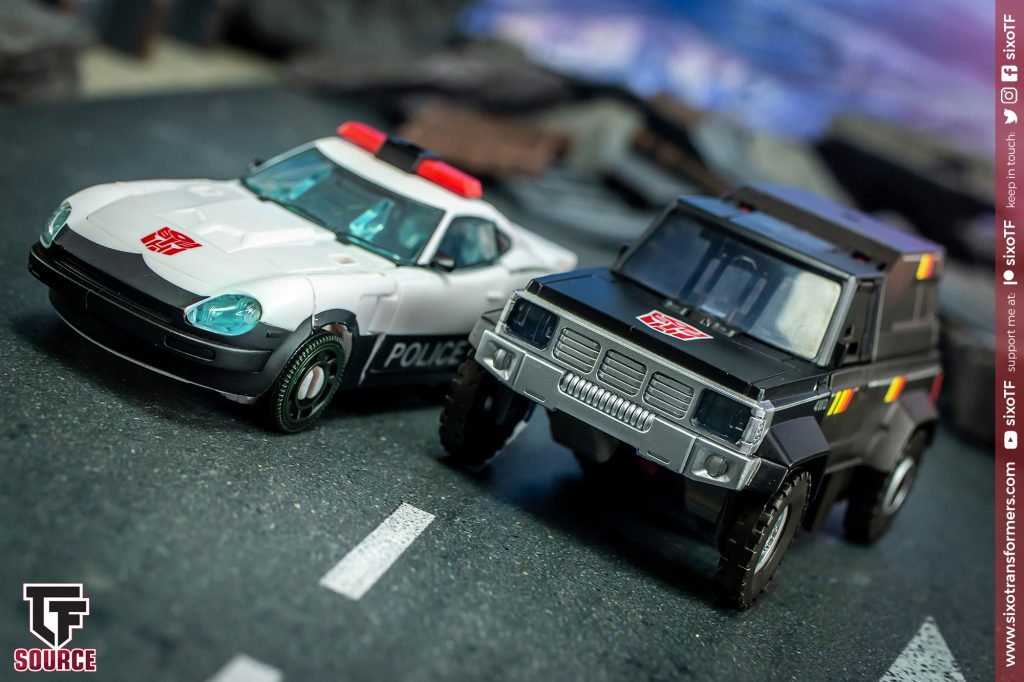 What’s especially strange is that in that regard, they don’t feel congruent with something like Earthrise Trailbreaker, which comparatively comes across very well indeed. The paint on that figure is noticeably better but it also feels more satisfying to handle and clicks together very nicely overall; it’s altogether much more in-line with my expectations for Generations toys as a whole. 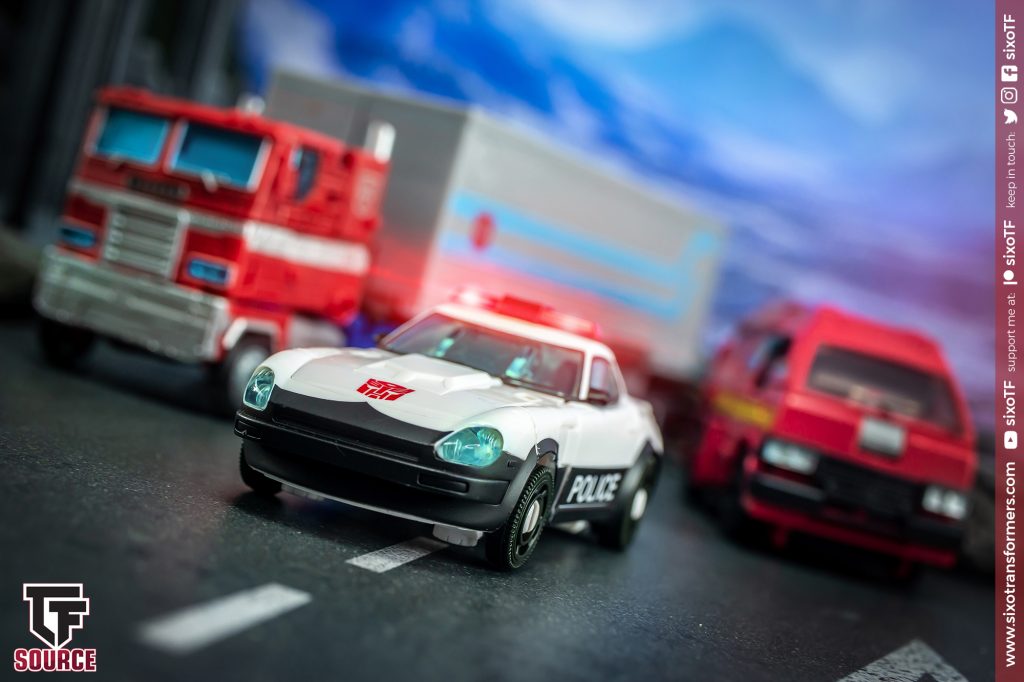 That’s also true with examples such as Earthrise Optimus Prime, who of course just made it into my “top ten” list for last year. It’s a shame to see how inconsistent these offerings feel from one another, in many ways. 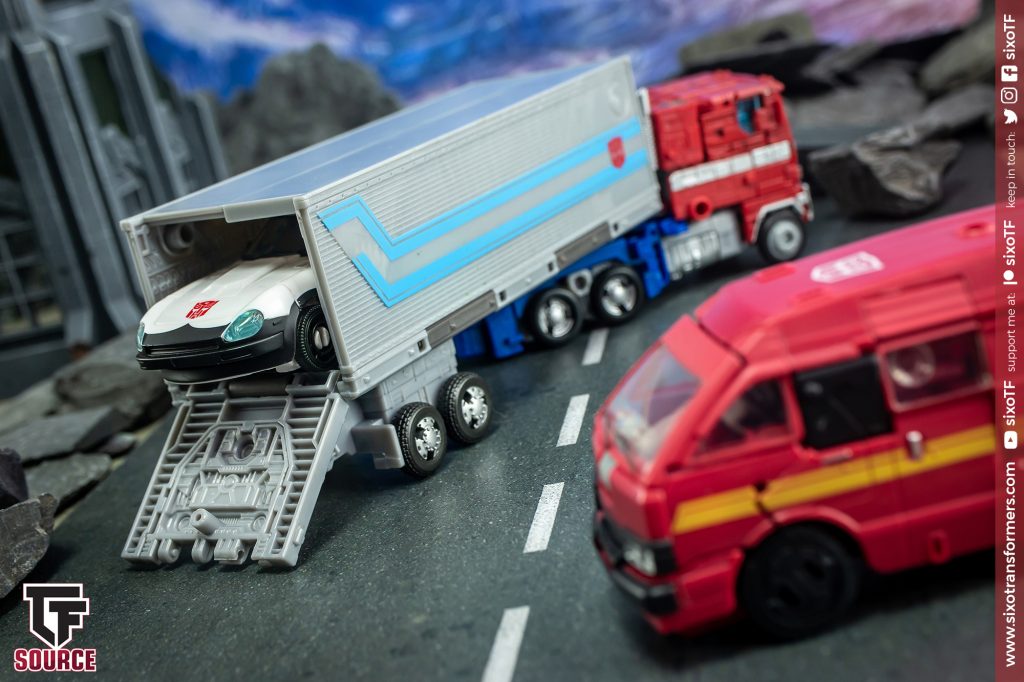 Still, there is of course fun to be had, and if nothing else a fair dose of nostalgic excitement at seeing some of the classic characters lined-up next to one another in modern form. 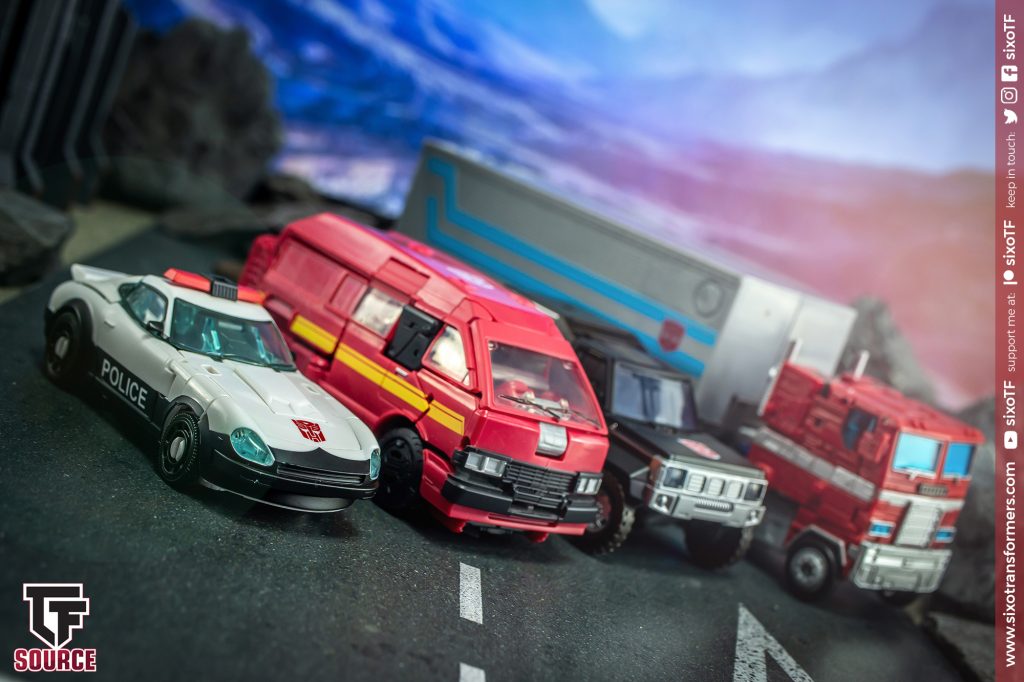 And besides, the journey into mainline territory has been interesting so far, so perhaps I can forgive a few dips in the road along the way. There is still an appeal to seeing such character represented in this fashion, even if the execution could have been more favourable. 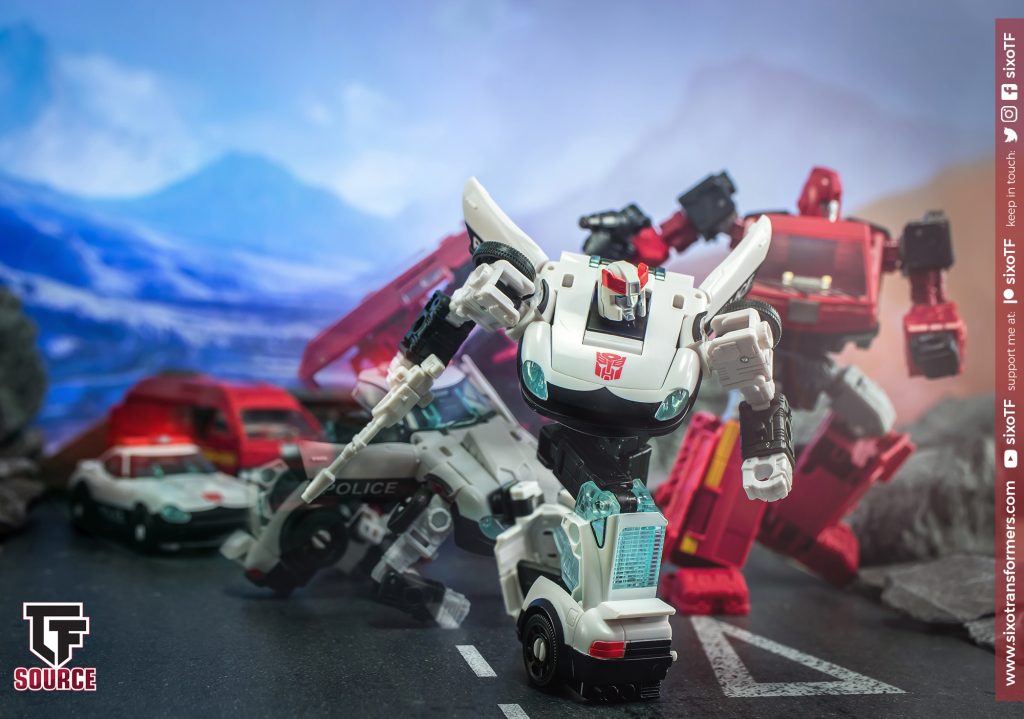 So a slightly less-than-auspicious start with this set, but next time we’ll be getting them transformed up and seeing how we fare in robot mode.