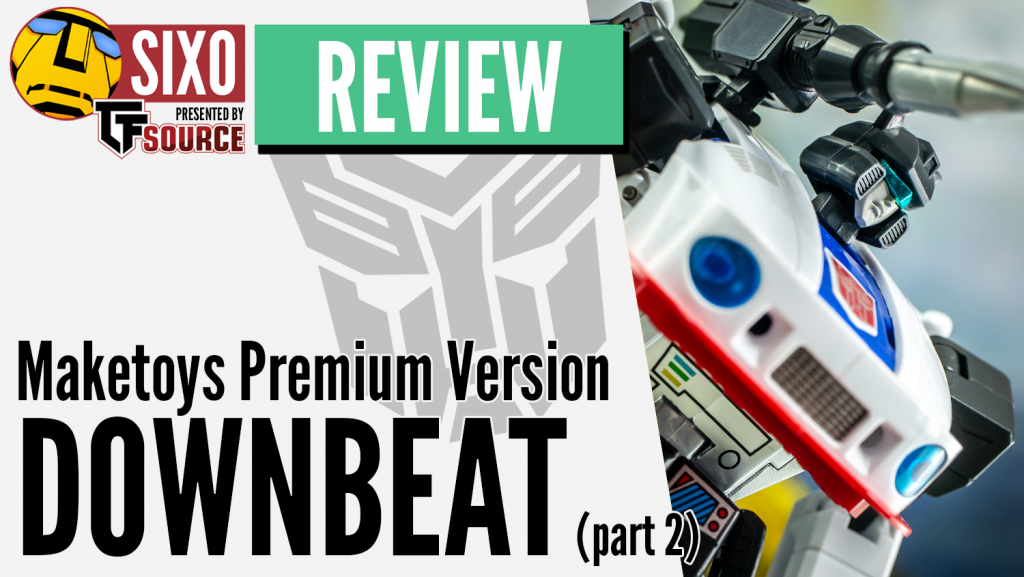 Welcome back to our extended look at the new (and improved?) Maketoys Downbeat! As we established in part 1, this is the so-called ‘Premium Edition’ re-release of the figure, and potentially represents a fantastic chance for collectors to pick it up if they missed out first time around. 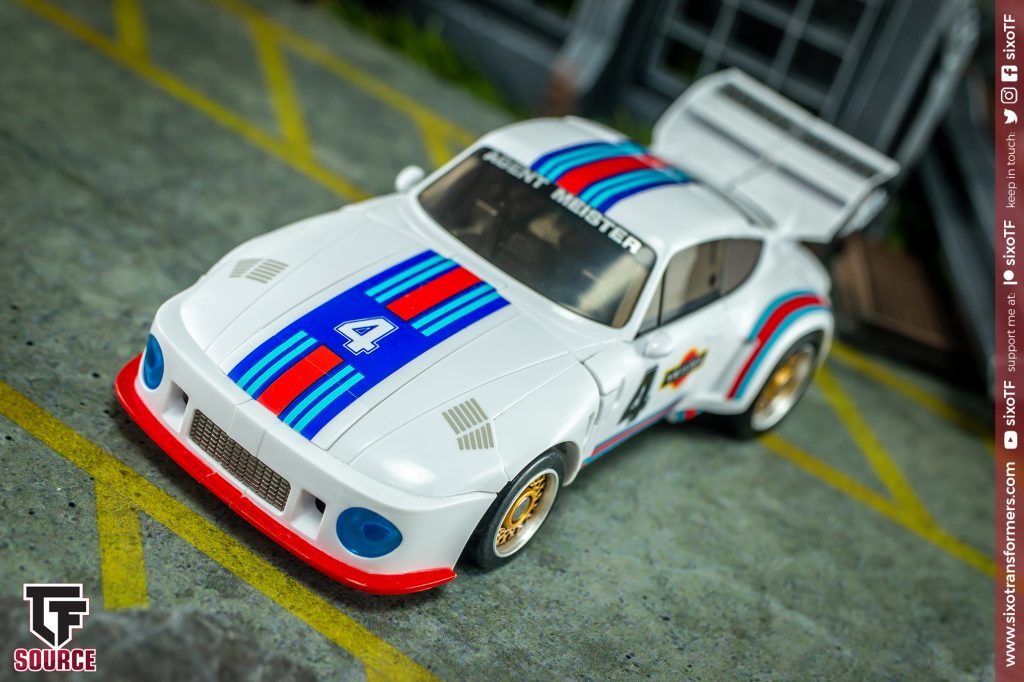 After all, that vehicle form is a bit of alright, isn’t it? About as close to perfection as I can currently imagine when representing the iconic character of Jazz (and that spectacular Porsche alt’ mode) in Masterpiece form. 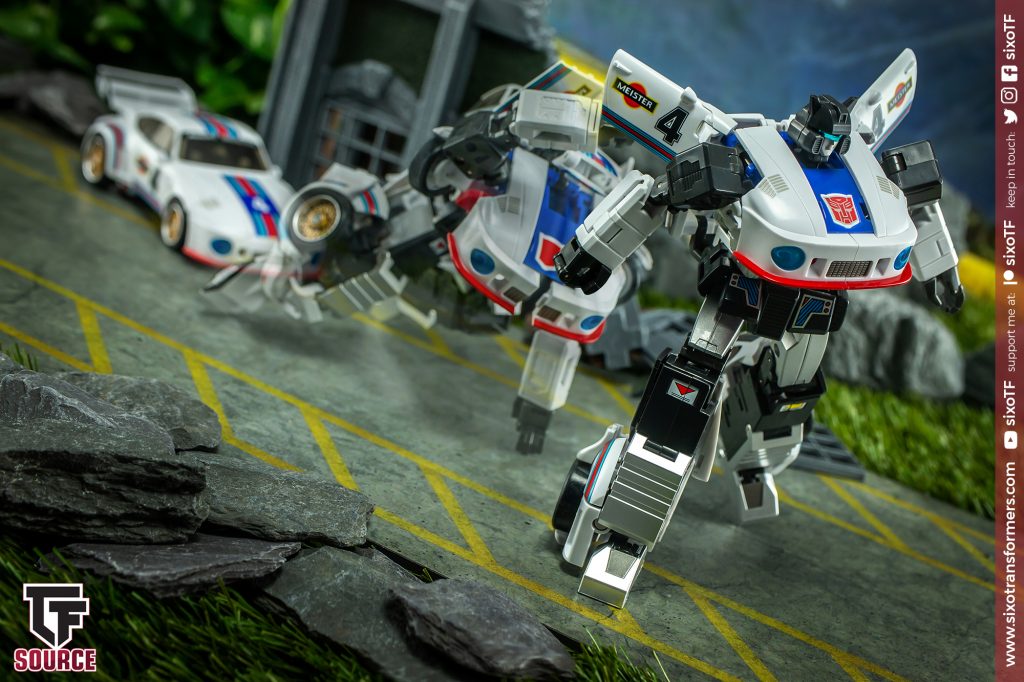 Today it’s time to talk robot mode though, with the process of getting there really being a tale of two halves. I mean that really quite literally, in that the bottom and top parts of the toy transform entirely independently of one another, with arguably most of the complexity involved being reserved for the former. 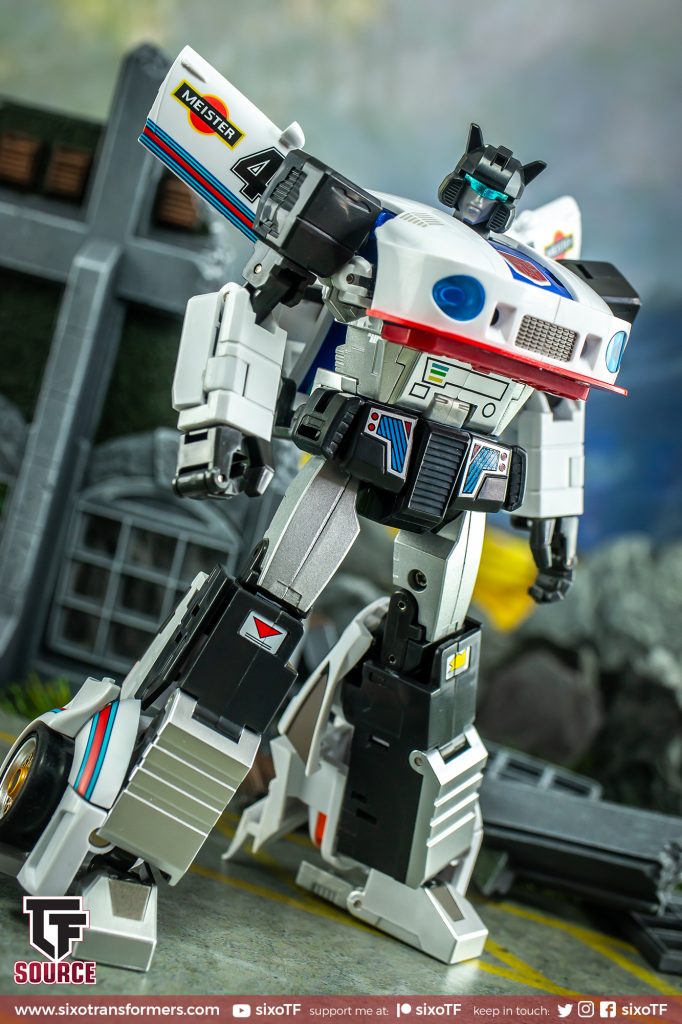 Yes, one common cause of comment on this figure is the manner in which the legs unfurl, which does take a bit of getting used to. I distinctly remember giving it a go for the first time on the original release and thinking it was all pretty confounding, but I have to say that with repeated attempts it’s actually become quite enjoyable now! It’s one of those where you just need to know the correct order to approach everything, and then you should be all ok. 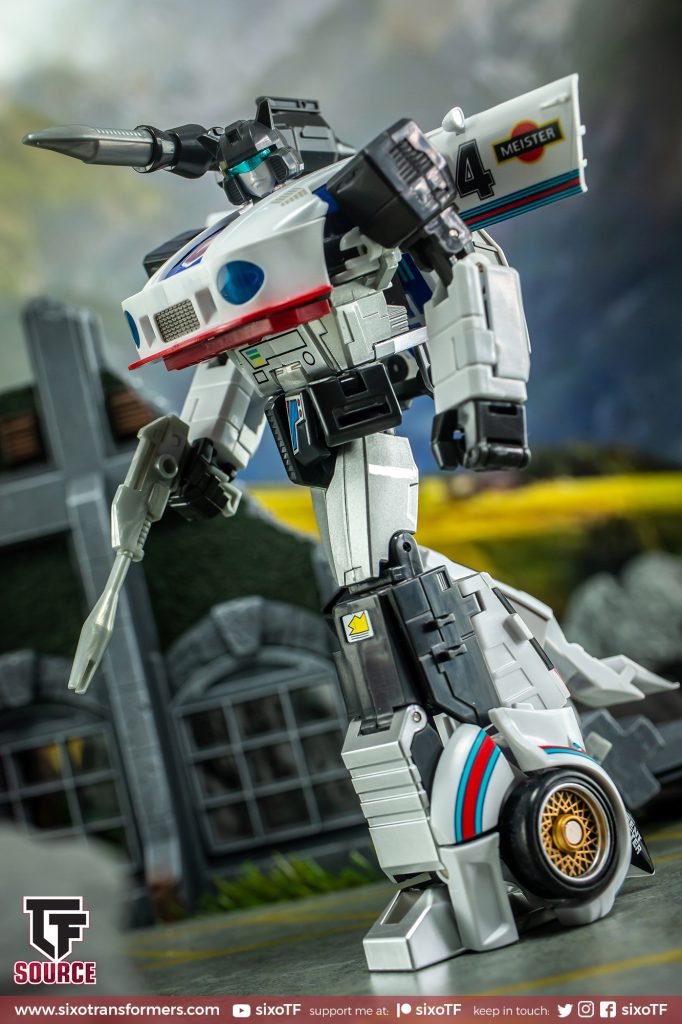 And hey, just look at what it gives you, eh? That’s an unmistakably handsome robot form and no mistake. In fact it often feels like a strange thing to say of an unofficial toy, but this is definitely the closest thing to Jazz’s animation model that I’ve ever seen in toy form. 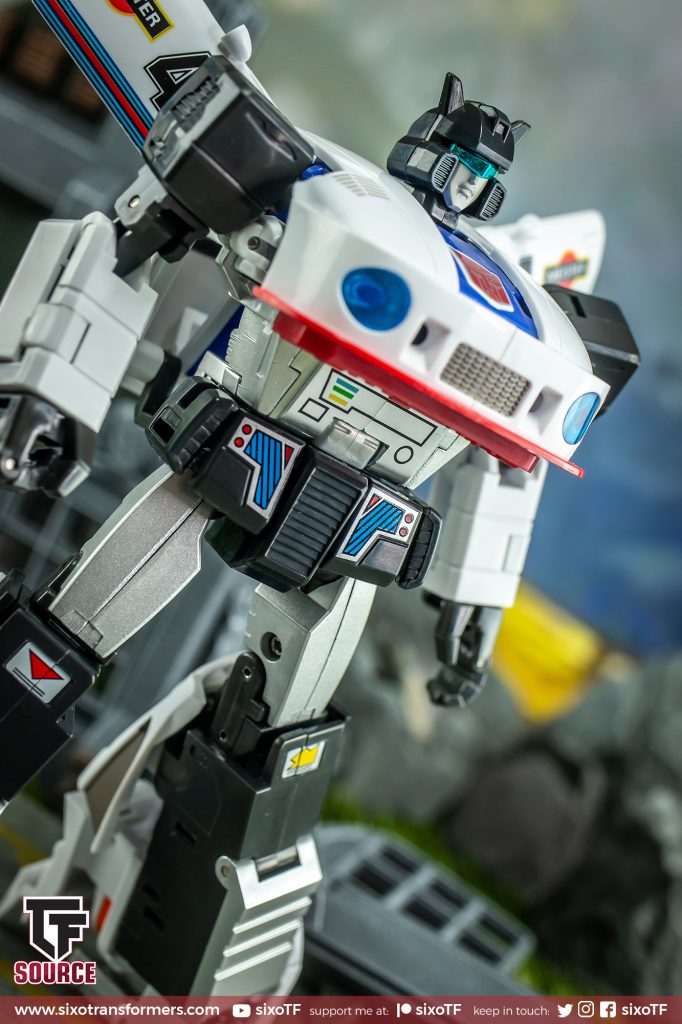 The proportions, the clean lines, the sculpt – they’re all a dead ringer for the way in which the character was portrayed on-screen, and serve to make Downbeat one of the more Masterpiece-feeling third party offerings I’ve handled in recent memory. 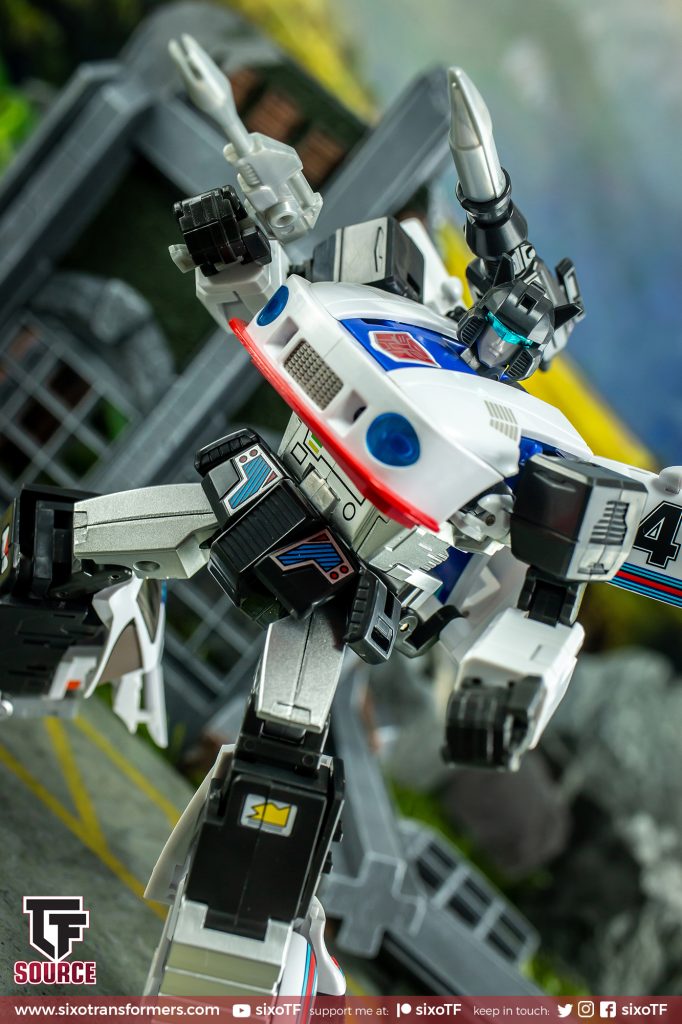 It’s no surprise that he was the subject of a Masterpiece Masterclass, then, as this is a take on the character that feels so spot-on overall that I’d honestly be happy if they never did an official Masterpiece rendition of him (although I’d obviously still be up for that, needless to say!). 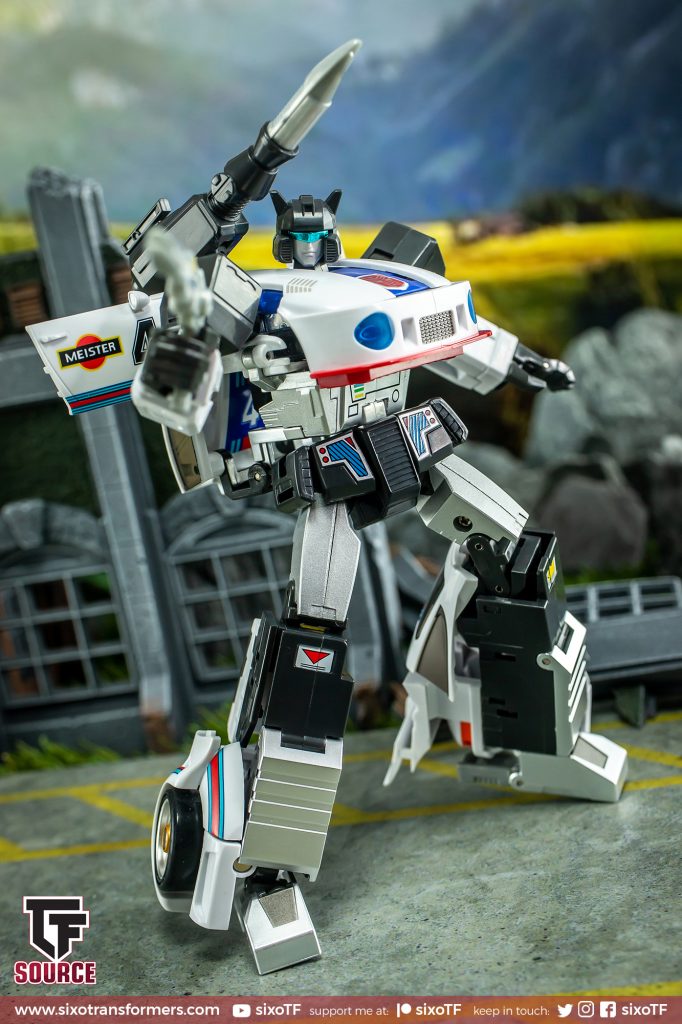 Here’s the thing though; whilst this ‘Premium Edition’ version is indeed a great chance to pick him up for the first time if indeed you never did, it’s also not truly a cartoon-accurate take in many ways. The base design might be, but as we explored in part 1, there’s definitely a dash of Generation 1 toy influence in there, too. 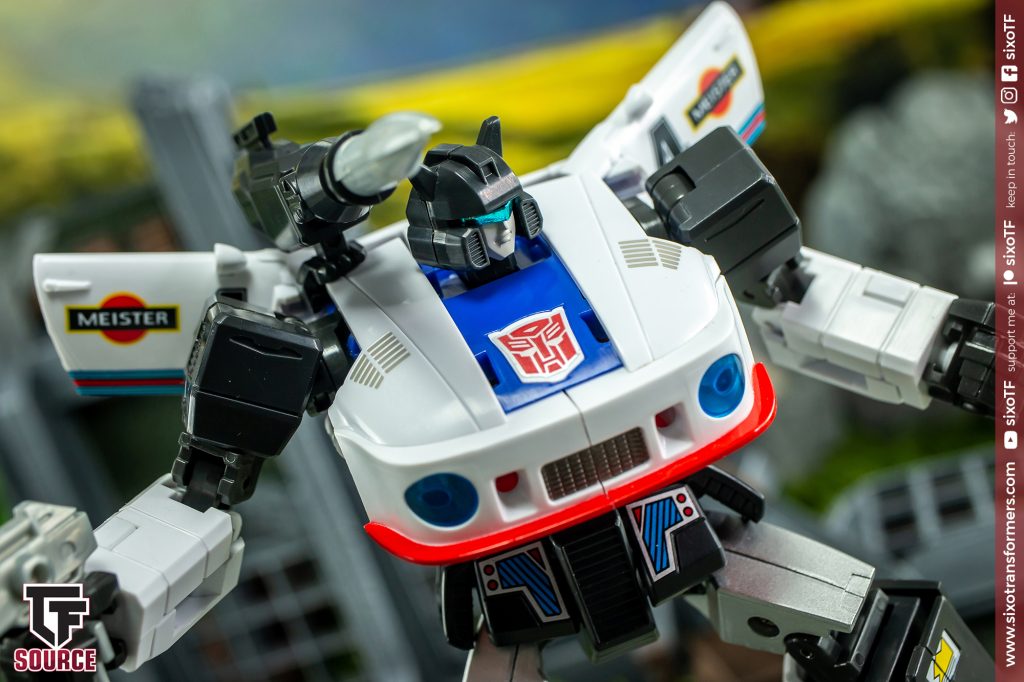 It’s much less obvious here than in his alternate mode, but it still really all boils down to those additional tampos. In robot mode they include new details on his knees, hips and abdomen, all of which recall similar details on his vintage counterpart. In truth, these elements are not even newly-designed for the Premium Edition, having been previously seen on the TFCon-exclusive Generation 2-inspired Maestro version. 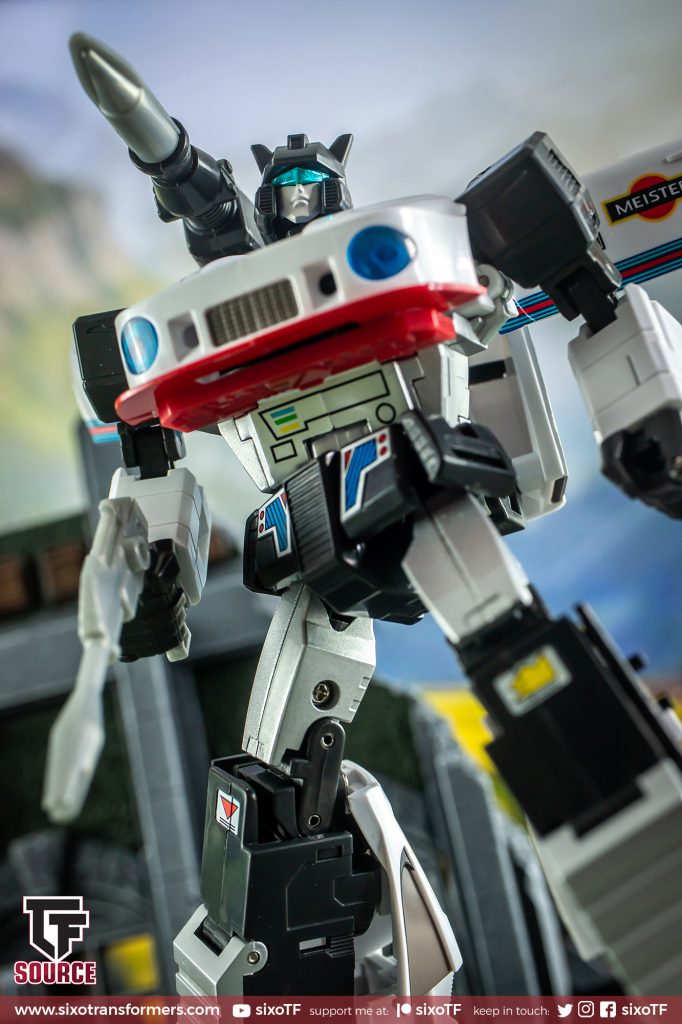 That’s even true of the natty new blue headlights, which I guess in many ways makes this new take a bit of a hodgepodge affair, taking bits from previous different versions to create a hybrid of sorts. That’s no bad thing, mind, especially as it does end up as a very pretty result, all told. 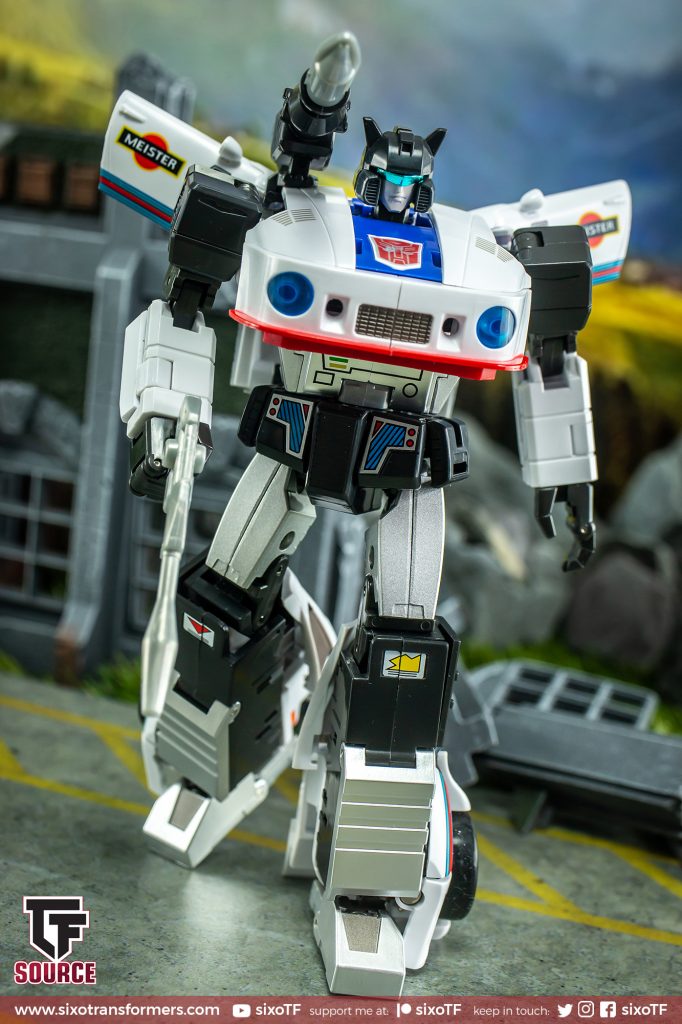 What is new here are some of the paint applications that you don’t immediately notice, particularly on areas such as the legs and feet. Where The original opted for an unpainted finish on the shins and the feet themselves, now there is a nice, shiny new coat of silver paint, and it looks really quite tremendous by comparison. 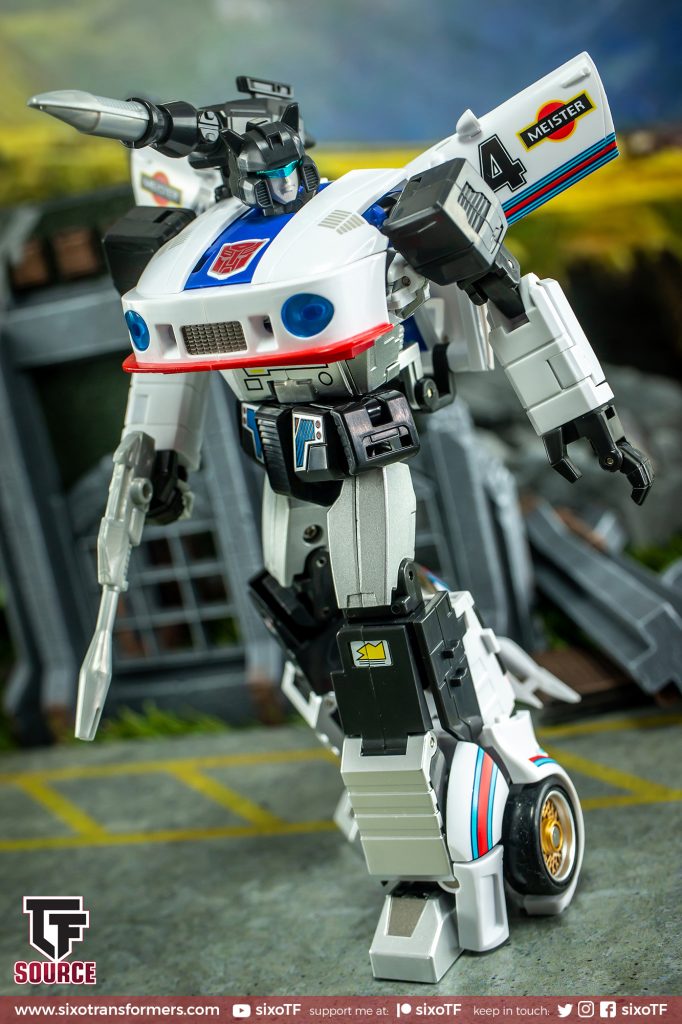 That’s especially true given that the plastic used was always a little unsightly on account of the obvious swirls on show, but still it’s good to see Maketoys stepping it up a little with the finish. Truthfully I might have expected a little more of this given the ‘premium’ title accompanying this toy, but still, what we do get is appreciated. 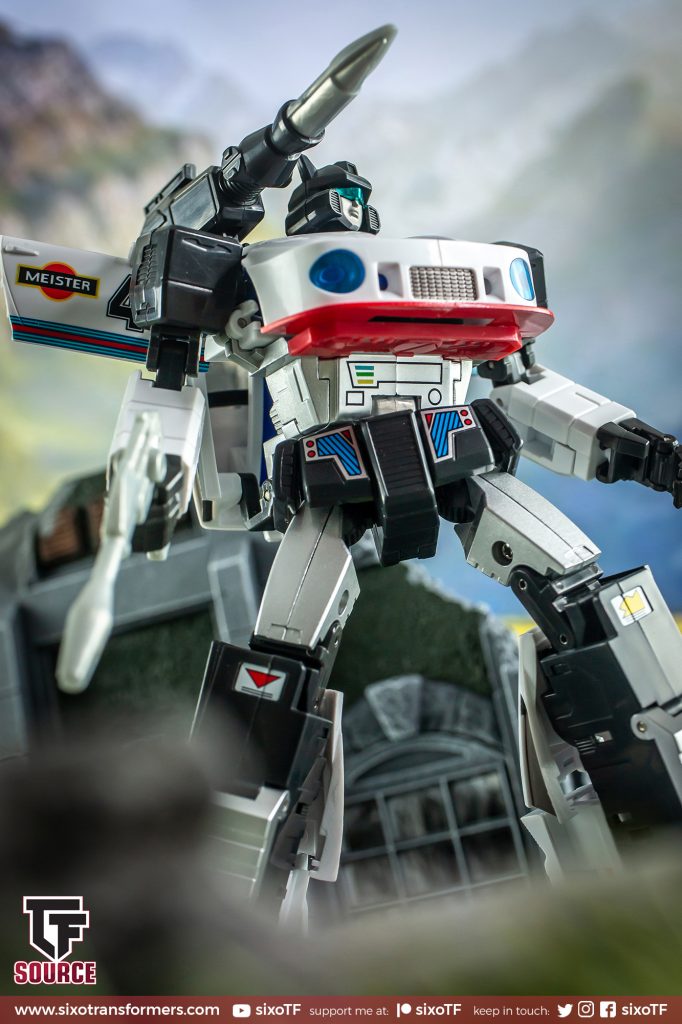 It leaves the other major new addition as the ‘Meister’ emblems on the door wings, which, as this design strikes a bit of a toyetic vibe, I’ve opted to display in their full glory! You can of course still fold them away if you so prefer, but for my part I am kind of enjoying steering into the look a little bit. 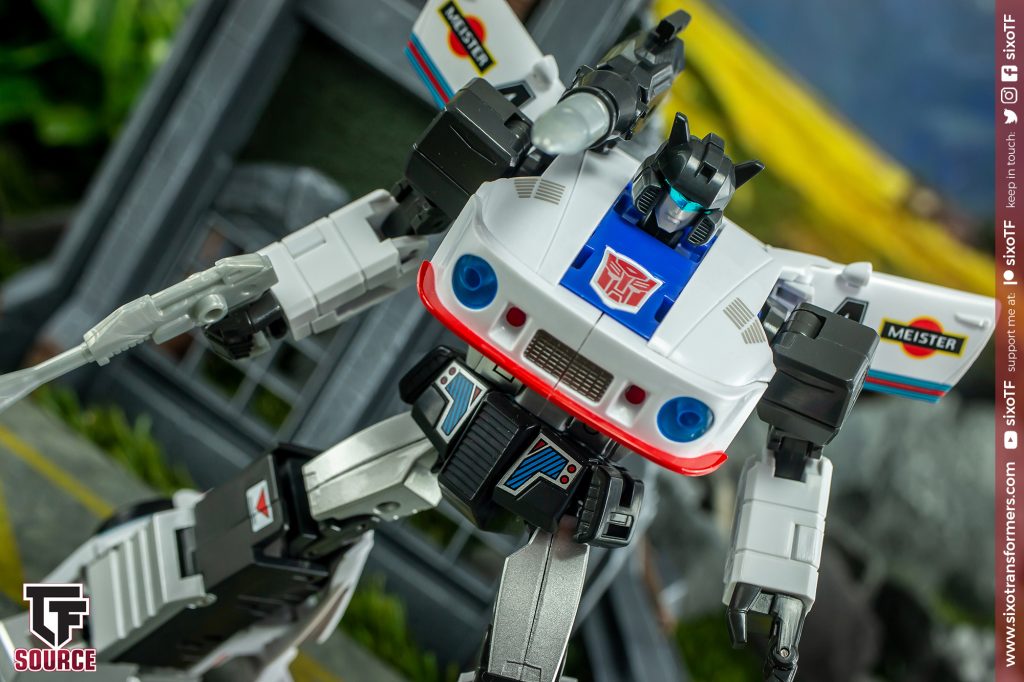 On that basis I’ve also opted to keep his shoulder-mounted missile launcher in place, which again harkens back to that original toy design. It clips on very sturdily and can be motioned up and down, too. Together with the wings, I think it all makes for a formidable silhouette. 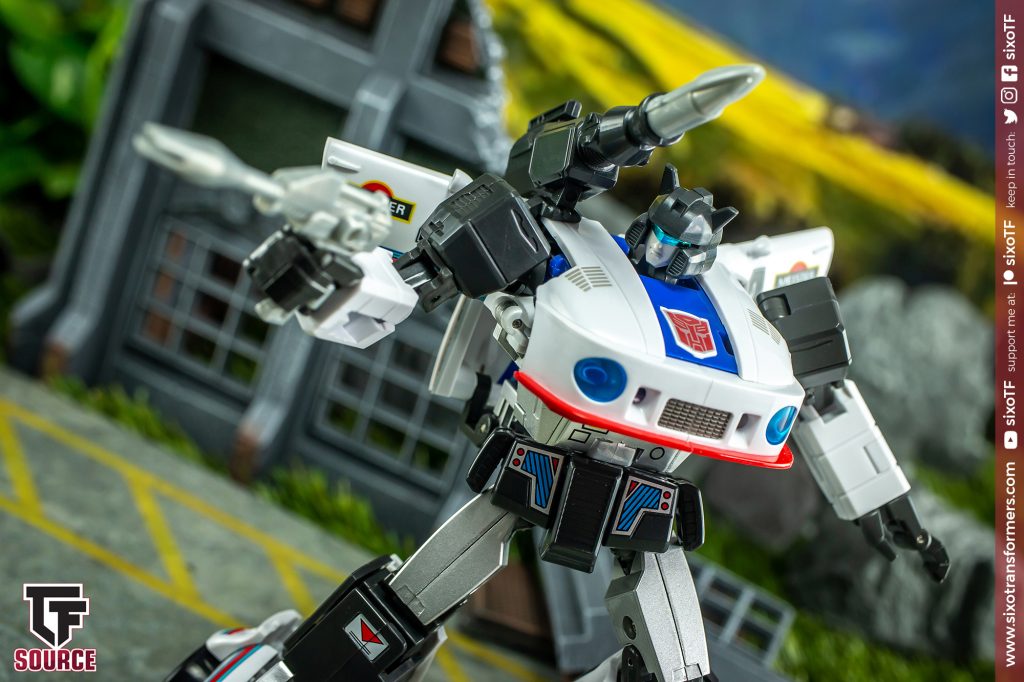 There is then the character’s signature hand-blaster also represented, which retains the swirly grey plastic seen on the original release, perhaps unfortunately. Still, it looks decent enough. 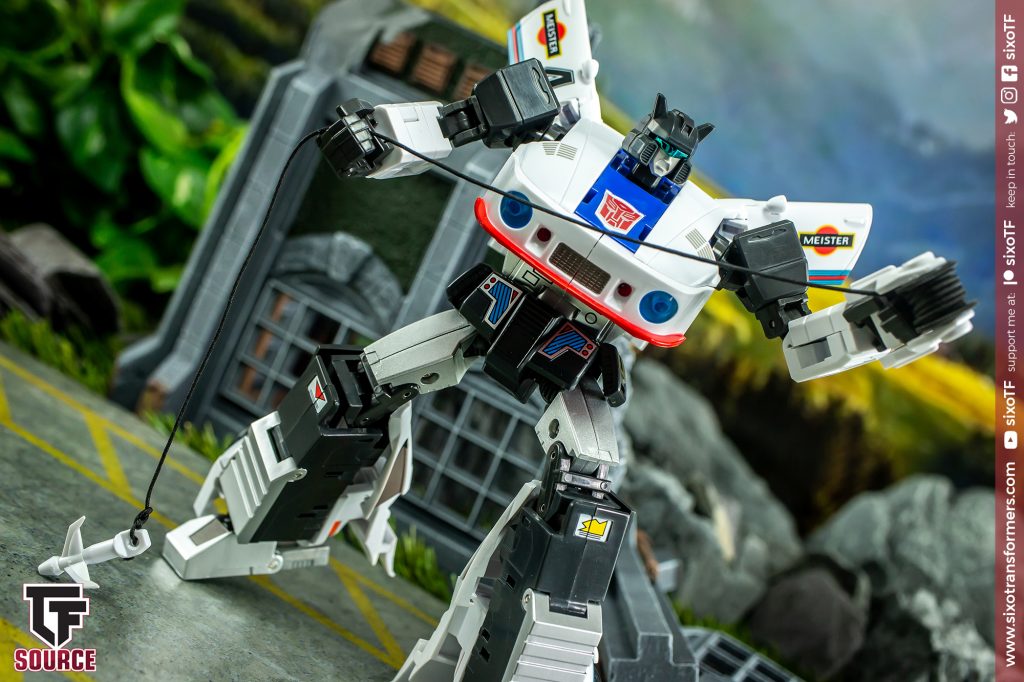 You then get the winch accessory that clips over the hand (as opposed to forming out of the wrist, as it does in the cartoon episode this references). This has always been a little bit of a pain to install properly, but unfortunately it actually suffered a bit of a break on my copy when trying to do so just recently! The small panel on the side has come away, and whilst it can be glued back on, it’s still annoying. 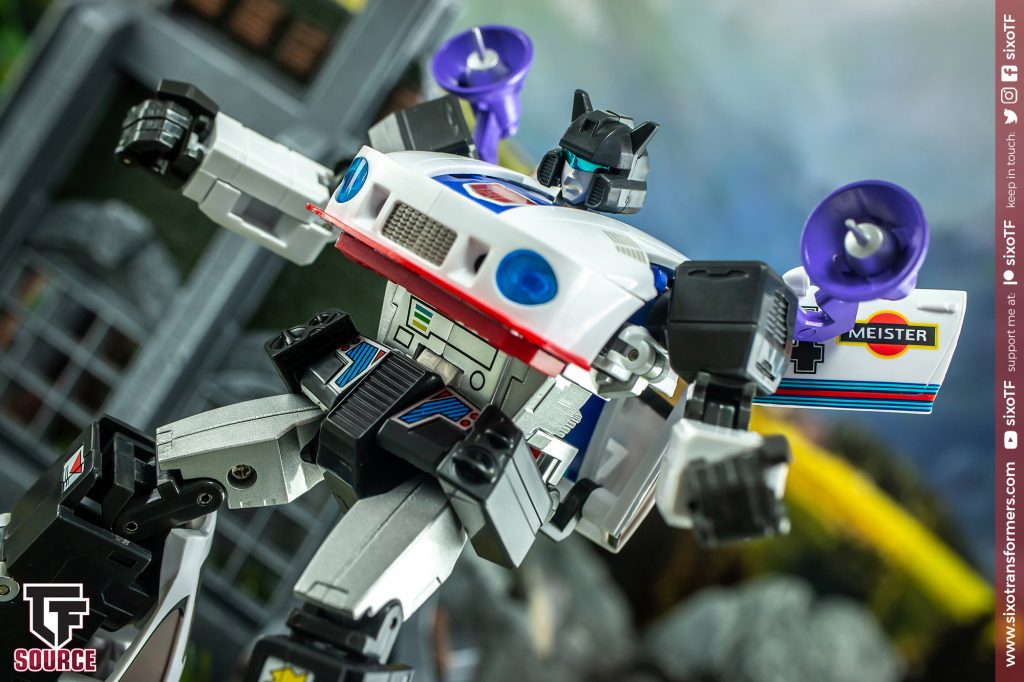 Perhaps more successful are the two sets of speaker accessories. The purple ones can also be installed in Downbeat’s vehicle mode, whilst the hip ones remain my personal favourites, if only because of how much I adore the Dinobot Island episode they reference. 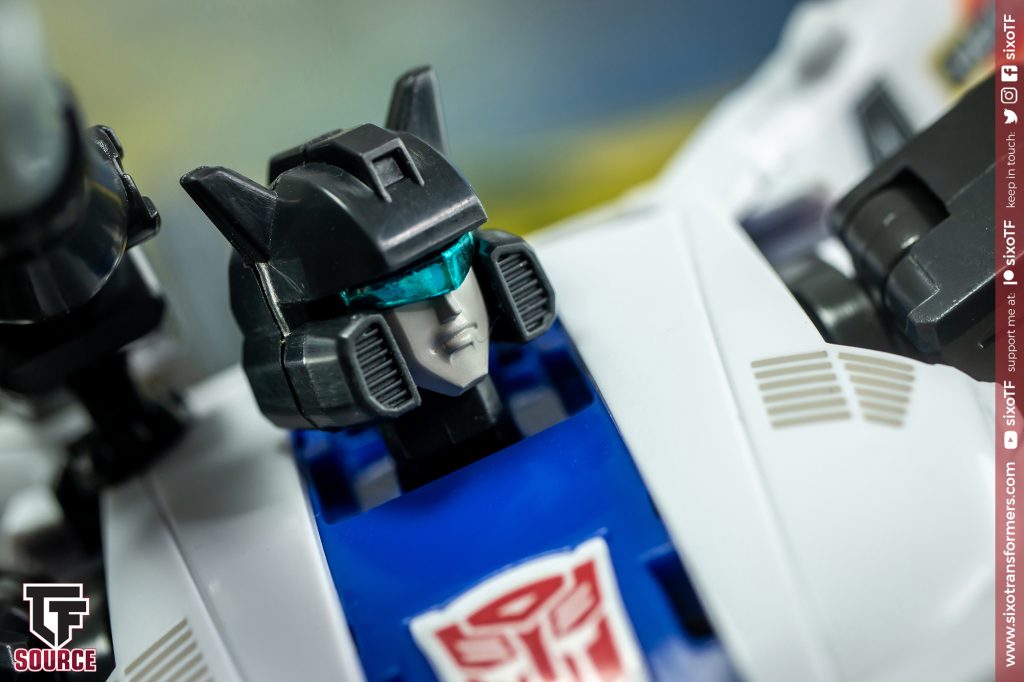 That leaves the final options for gimmicks as the additional faces that can be swapped out with ease by removing the helmet. I really love the default face, which I think does a brilliant job at representing the character, too, but it’s always good to have options. 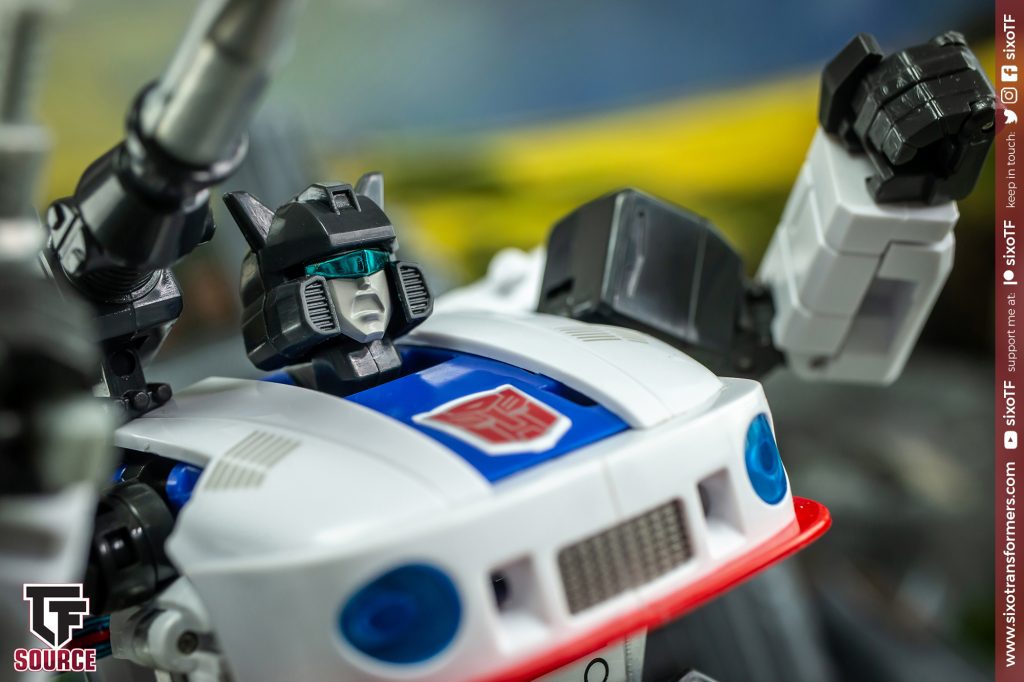 Of the two alternate choices, I definitely rate the shouting face a lot more, as I think it truly captures the vibe we get from how Jazz is portrayed on-screen. I’m not always convinced by how Maketoys do their faces, but here they’ve entirely won me over. 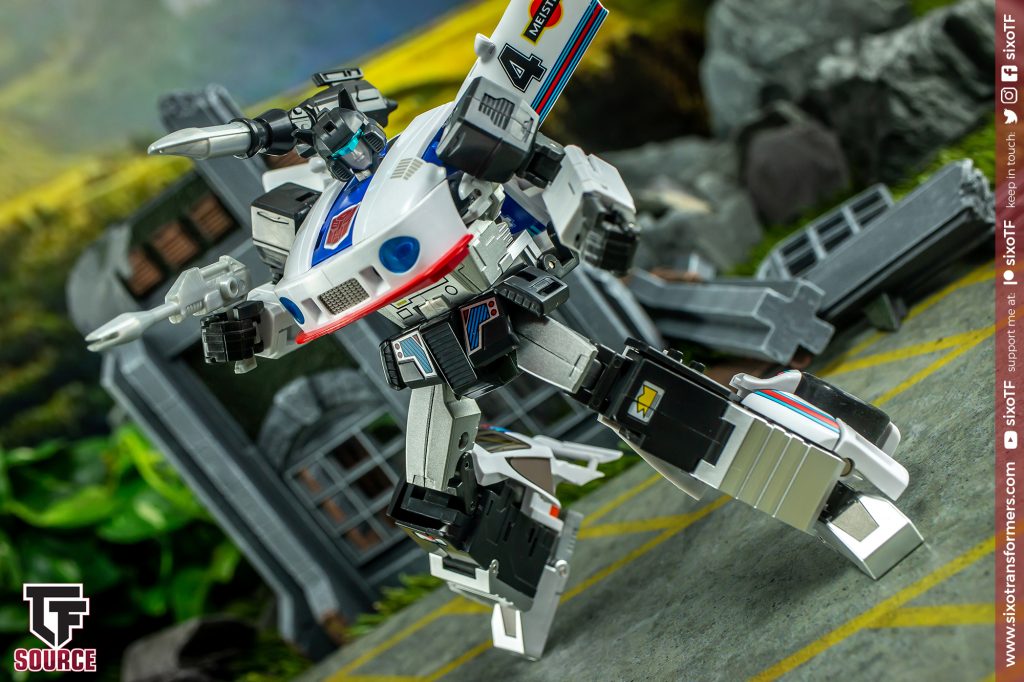 And really, that’s your lot! It’s not so stunningly different to the original release that I’d say it’s necessarily worth “upgrading” to, but as I already mentioned I do think it represents a fantastic opportunity for anyone who hasn’t yet picked this guy up to now do so. 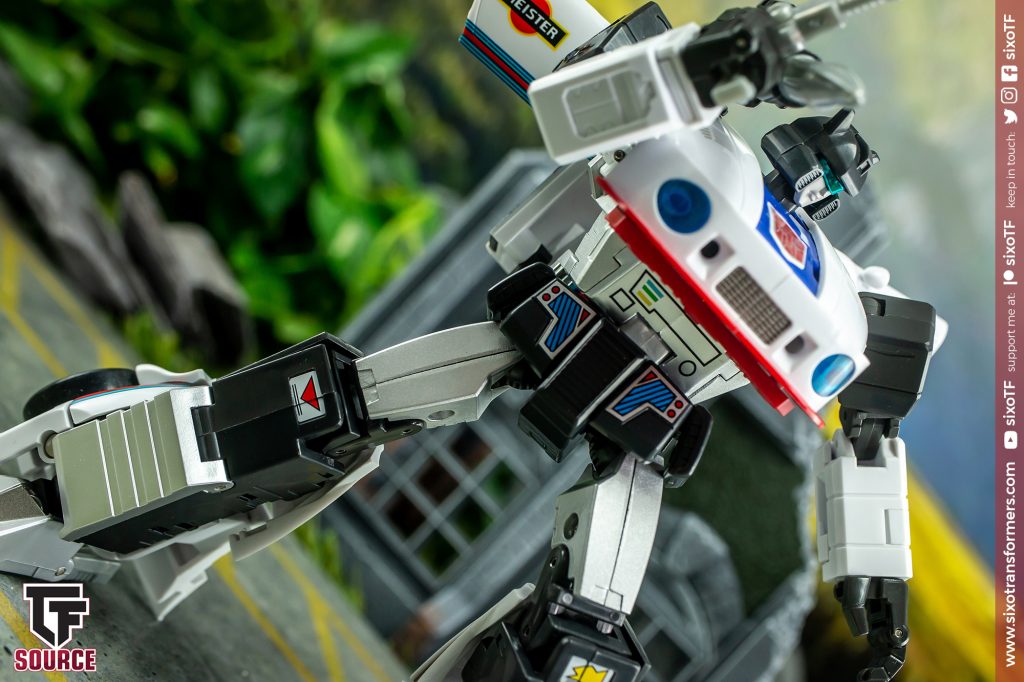 In truth, it might have been nice to see Maketoys producing a few extra accessories for this set (as apparently will be the norm for their new ‘EX’ reissues moving forward), but I’m sure it will be a complete enough package for anyone who’s new to the design nonetheless. 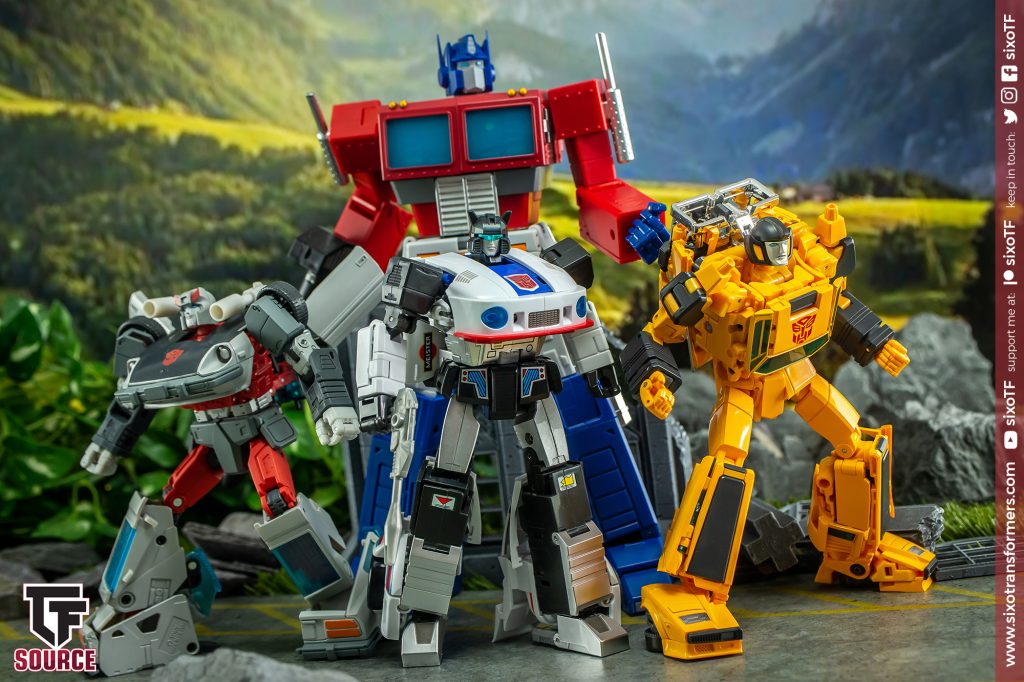 The question then becomes of how best to display him, as this mould was definitely designed with a more cartoony presence in mind, no doubt. On that basis I still think he looks excellent with any of the more recent official Masterpiece releases (or indeed some of the third party equivalents meant to work alongside them). The additional tampos don’t feel like too much of a departure that it can’t still work. 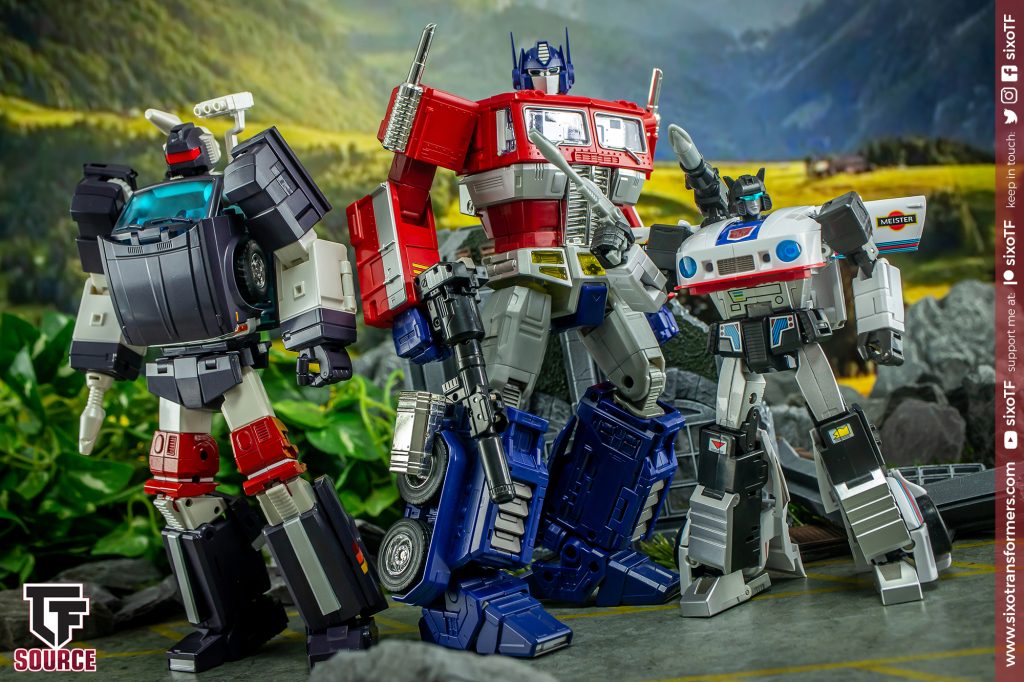 That said, if you are looking to build some sort of toy-inspired MP collection, all representing the original, vintage toys in new souped-up glory, then this could be a fantastic addition too. 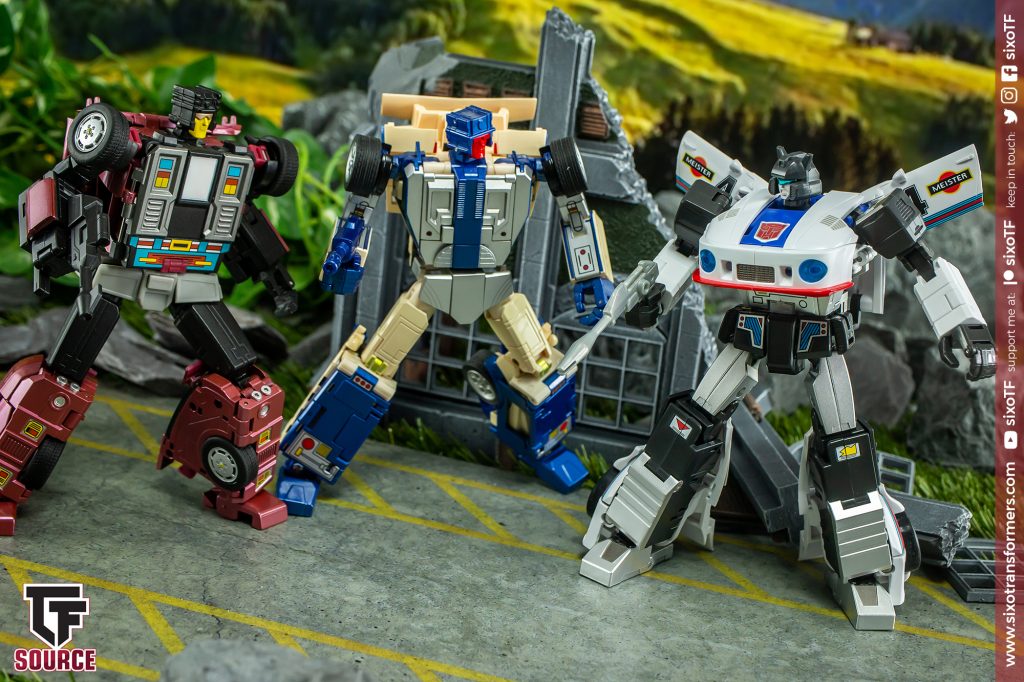 After all, there are more and more such options becoming available on the market, so it’s definitely a widening trend, and with Downbeat’s doors folded up, he most certainly looks the part in that regard. 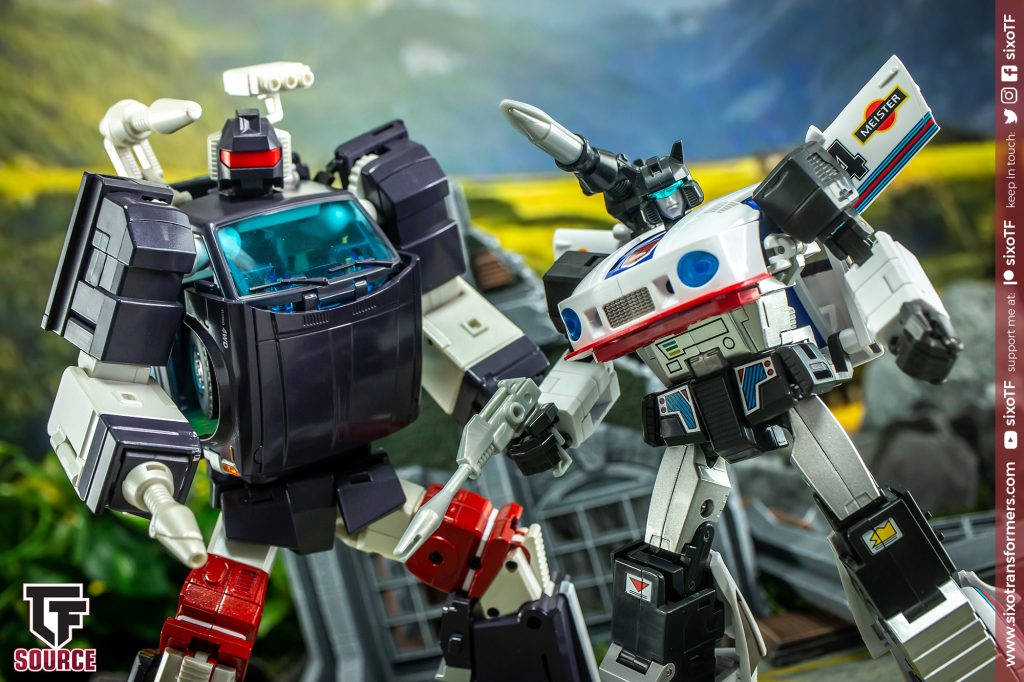 I mean, it’s almost enough to make you want new versions of all your cartoon-inspired favourites, eh? Maybe a new toy-esque Sunestreaker? Tracks? Ironhide, even? No, just me? 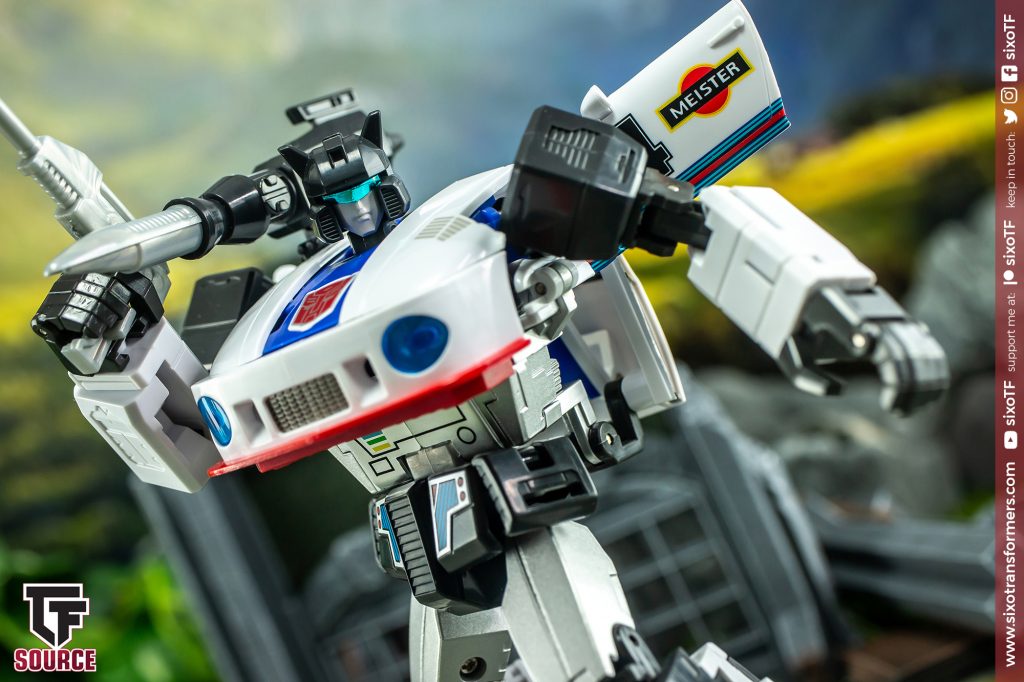 Oh well, I’m sure there’s one thing that most of us can agree on, and that’s how gorgeous a toy this truly is, regardless of whether you want to see it as ‘toon or toy-inspired. It was already a brilliant design and here Maketoys have given it just that little extra sparkle to make us appreciate it all over again.

WHAT’S HOT? Excellent in both modes, with a generally quite fun transformation and some neat gimmicks.

WHAT’S NOT? I had a small break on the winch accessory on my copy.