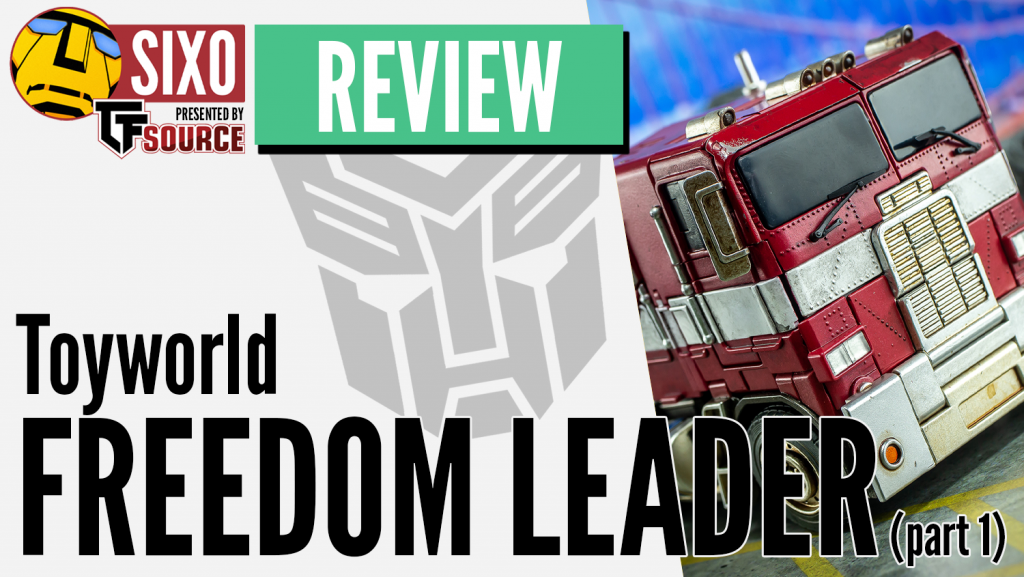 Although it feels like a lot longer, it’s only been since about the middle of 2020 that I’ve been unboxing new toys on camera. Yet already in that time there have been a good few memorable moments, and one that definitely sticks in the ol’ brain is trying to contort Toyworld Freedom Leader into its vehicle mode, such is the rather unholy process required to do so. 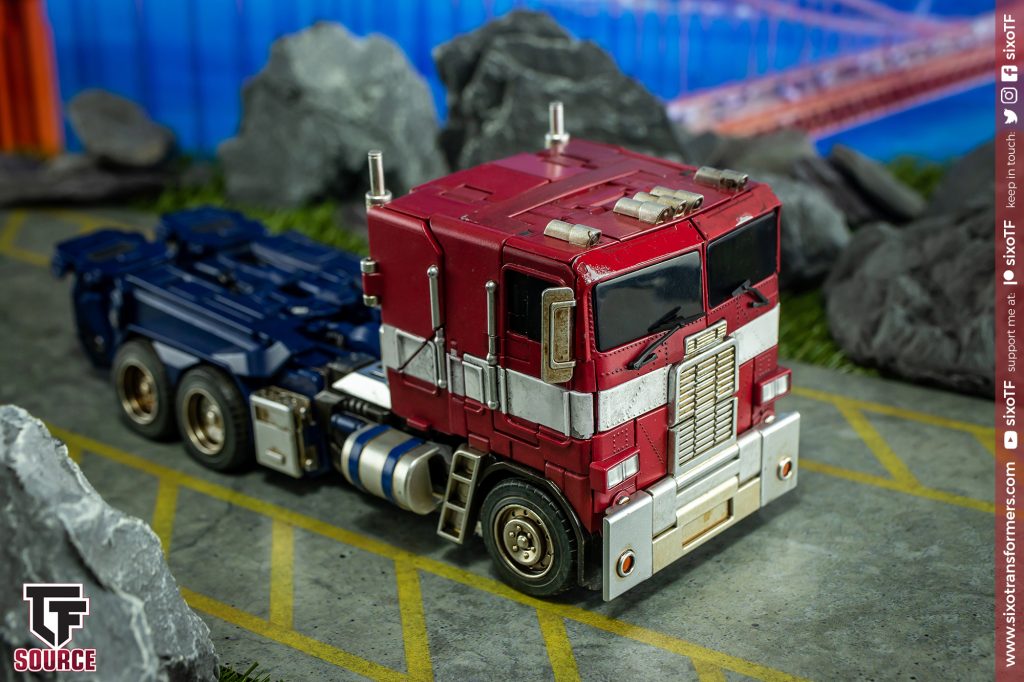 In fact it’s been one of the videos of mine that’s raised the most comments, at least a few of which have been from folks quibbling my conclusions on the complexity of the piece, arguing that the toy is a powerhouse of design, or just plain putting across the point that this is a superior product to the alternate officially-licensed option from ThreeZero purely because *it can* transform to begin with. 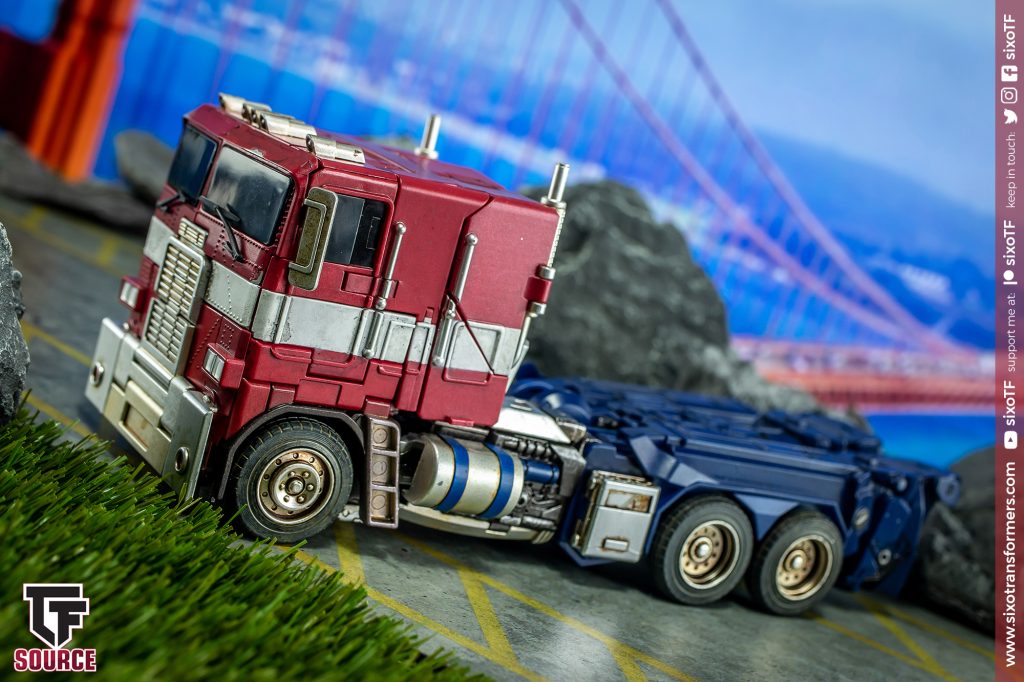 Far be it for me to claim that any of those people are wrong in anyway – this whole reviewing lark is inherently a matter of opinion, after all, and whilst I know that I was left feeling a bit disappointed by my first impression in hand, it’s only fair to assess that plenty of people have been equally won over by it. 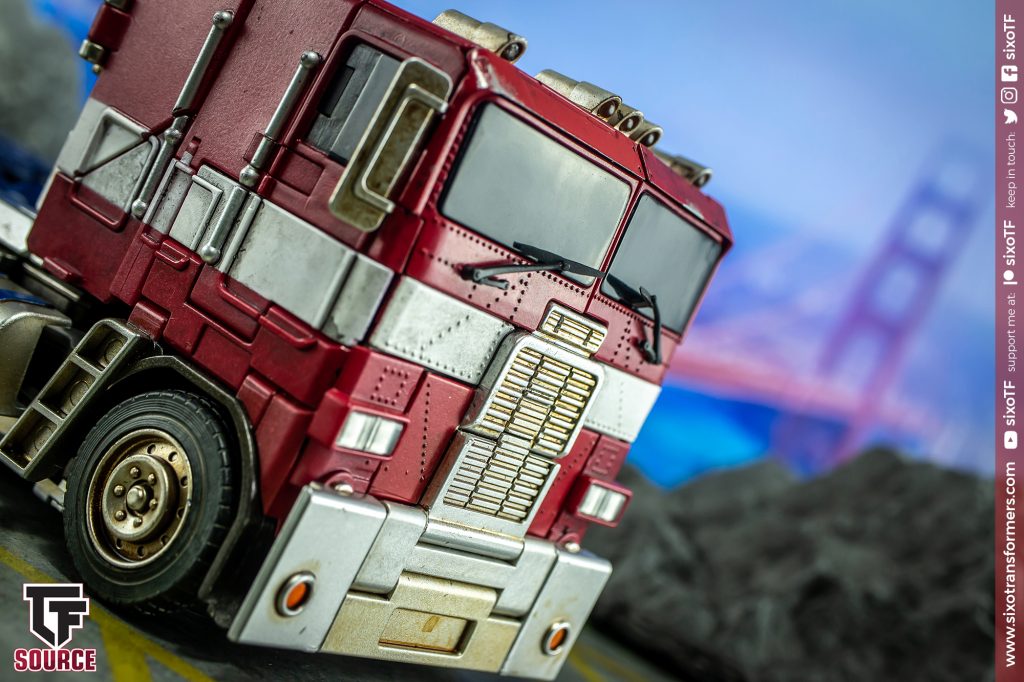 Ultimately, my conclusion at the time was that your mileage may vary depending on what you’re really after from a toy like this. For example, are you really going to transform much at all? And if not, do you really *need* it to do so? 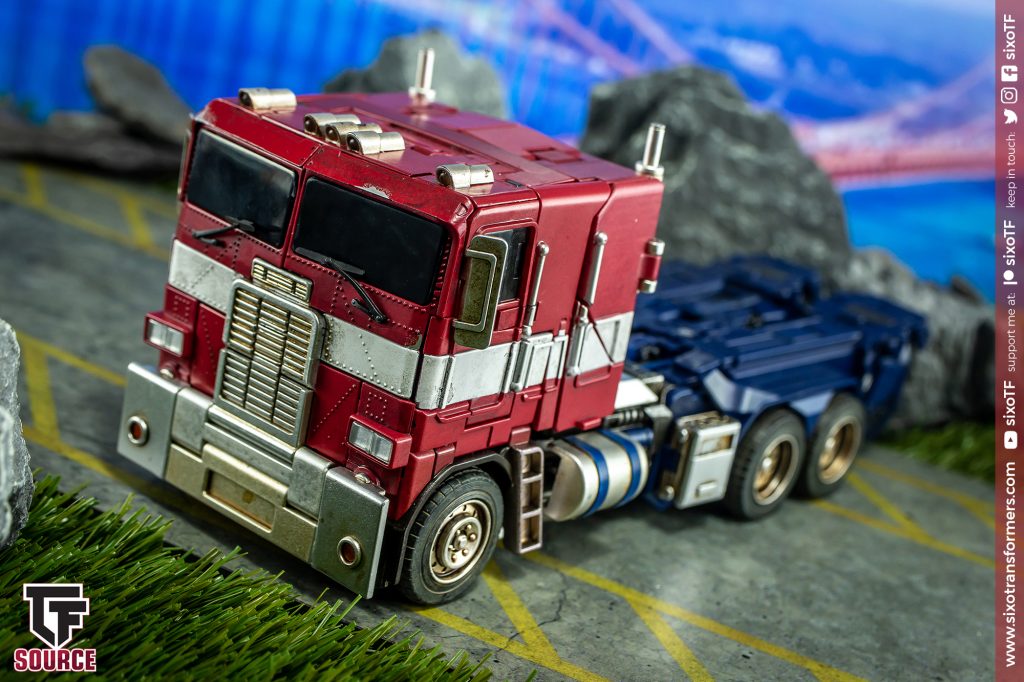 But perhaps I’m getting ahead of myself. After all, when we left off I’d not even managed to fully contort Freedom Leader into his truck mode successfully, so maybe an update is in order to kick us off. Suffice it to say I have managed it since then, although it did take a lot of perseverance and some very sore fingers along the way. Again, others have told me that they haven’t experienced such hardships, so I’m almost wondering if this is something that might vary depending on your copy in hand. 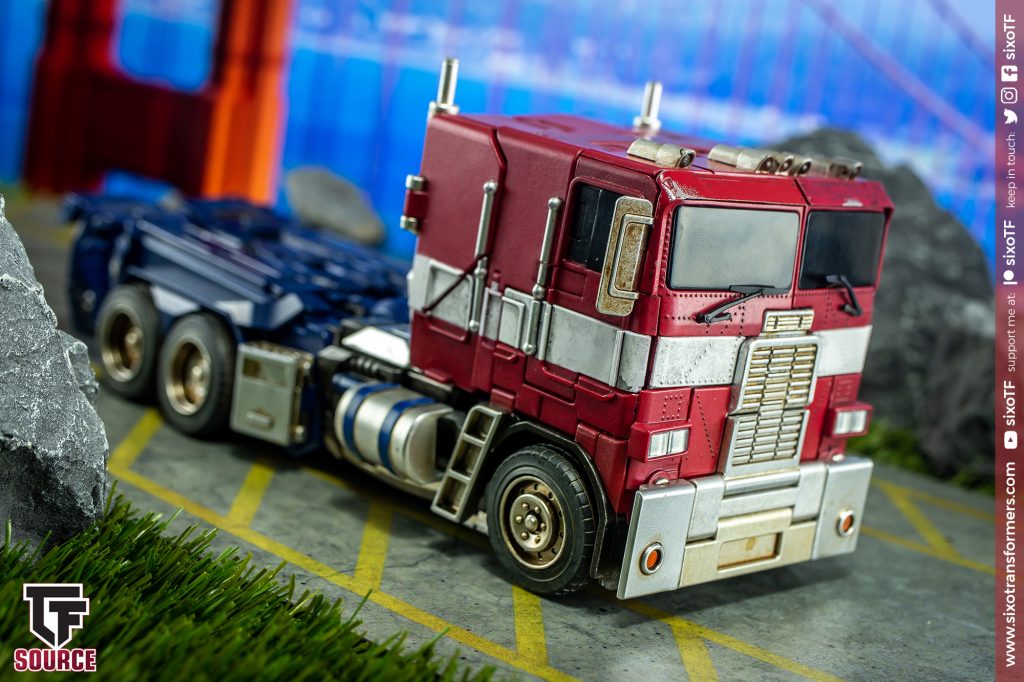 In any case, having finally managed to go the distance, how does it look? Well, pretty great, actually! But then my concerns with this toy were never about looks, as I’m sure the photos will testify. 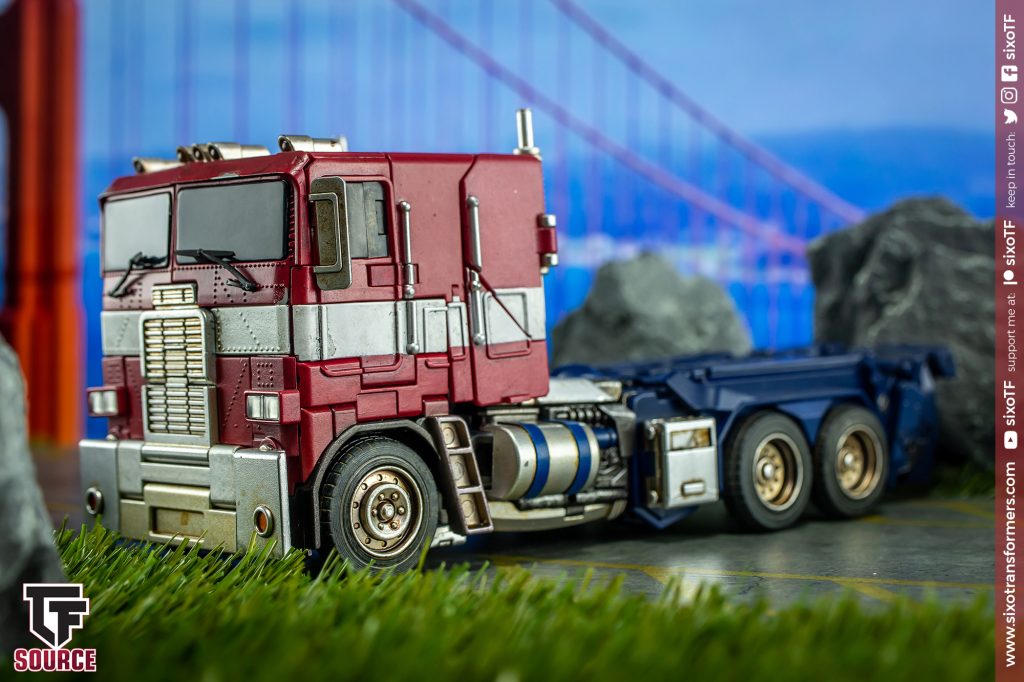 First thing to note, it’s an exceptionally clean and tidy alternate form. The general aesthetic employed here probably helps to hide the little bits of kibble that are present, allowing them to blend into the intentional “messiness” of the toy’s design, but still there’s a lot to admire. 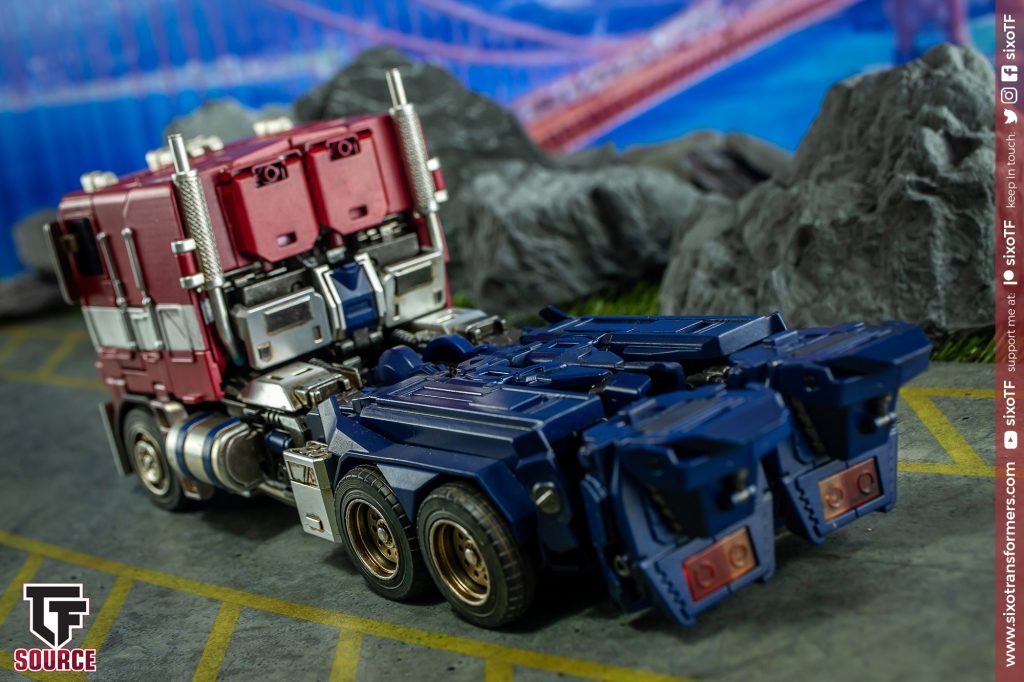 Even a rear view will attest to that, with perhaps the all-too-obvious robot mode feet being the clearest clanger on an otherwise tidy truck bed. Still, it’s a problem a lot of Optimus designs have to live with, so whilst I do think Toyworld could have pushed it a little further, I don’t hold it against them, either. 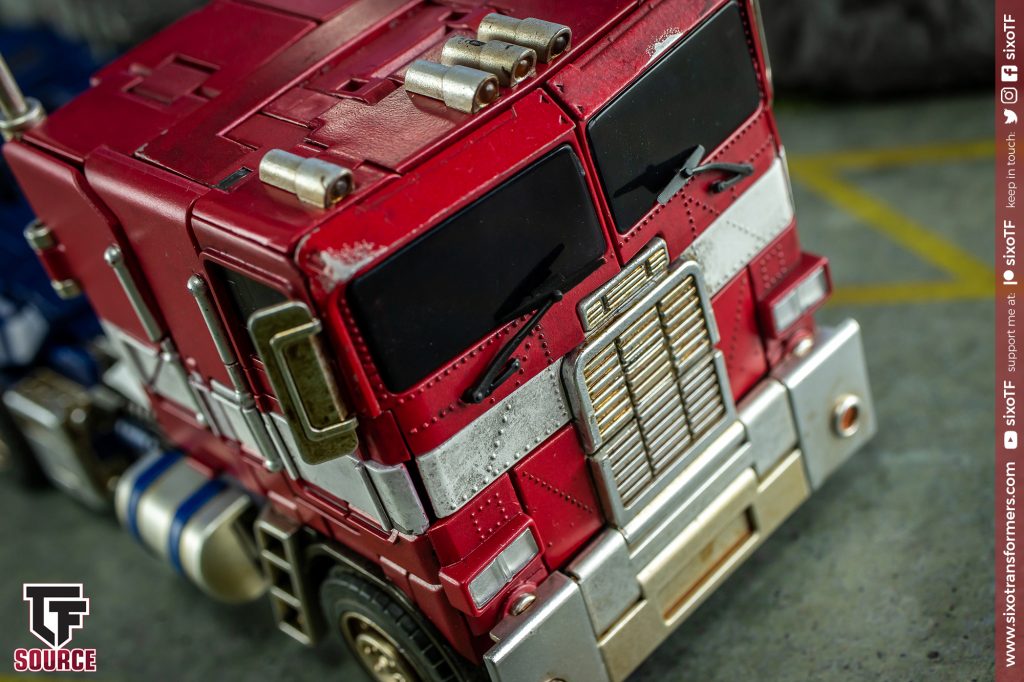 Besides, that nitpick aside, there’s little doubt that Freedom Leader is a feast for the eyes. A lot of attention has been pumped onto making it look as spectacular as possible, with the weathered finish doing a lot of heavy lifting in that regard, but really the results speak for themselves. It’s stupendous. 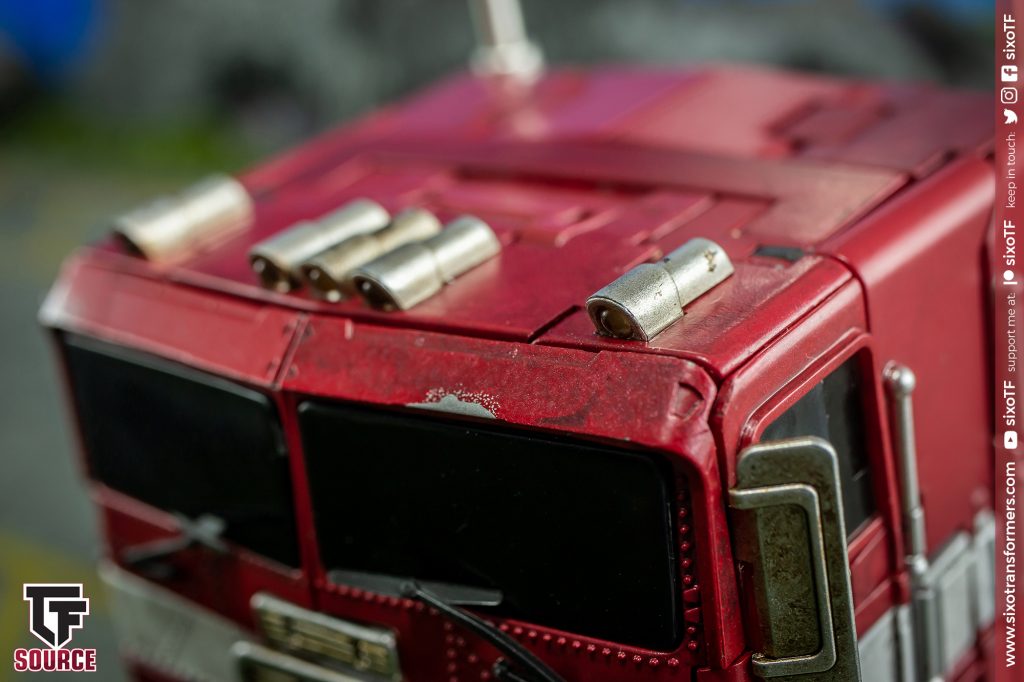 The dirty paint, intentional scuffs and corroded finish all make him a bit of a showstopper in hand, and I’m sure will be the kind of thing that will please many a collector on a shelf. It also helps to blend some of the panels that sadly don’t quite sit completely flush from transformation, so that’s a bonus I suppose! 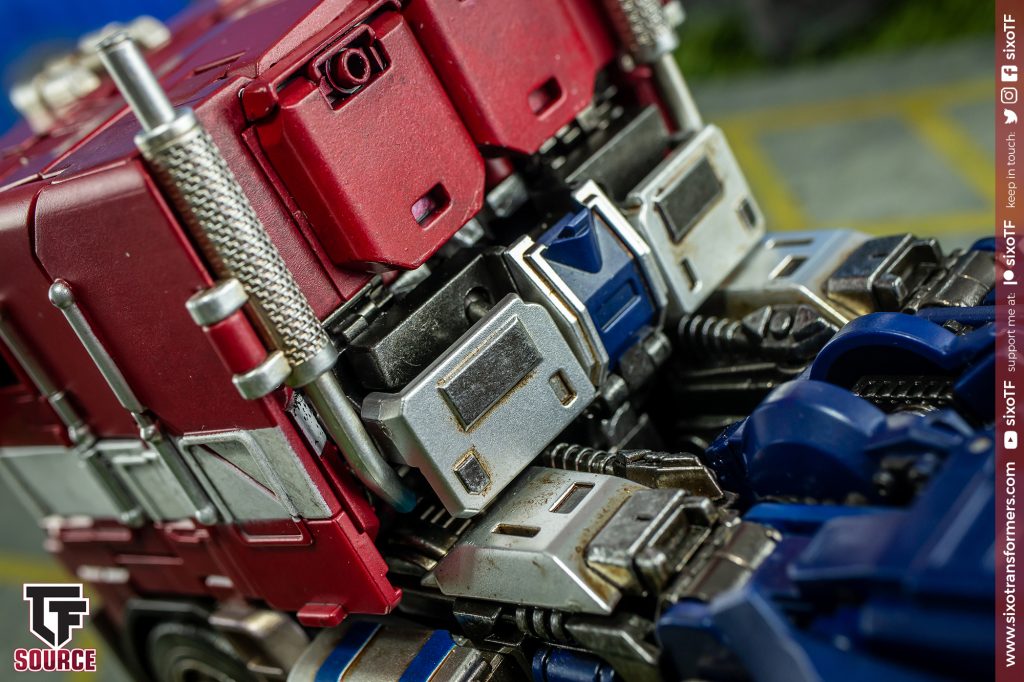 In fact it’s funny just how… “grungey” this figure looks on the whole, with a pleasing amount of asymmetry employed to the weathering that really helps to sell it to the eye. 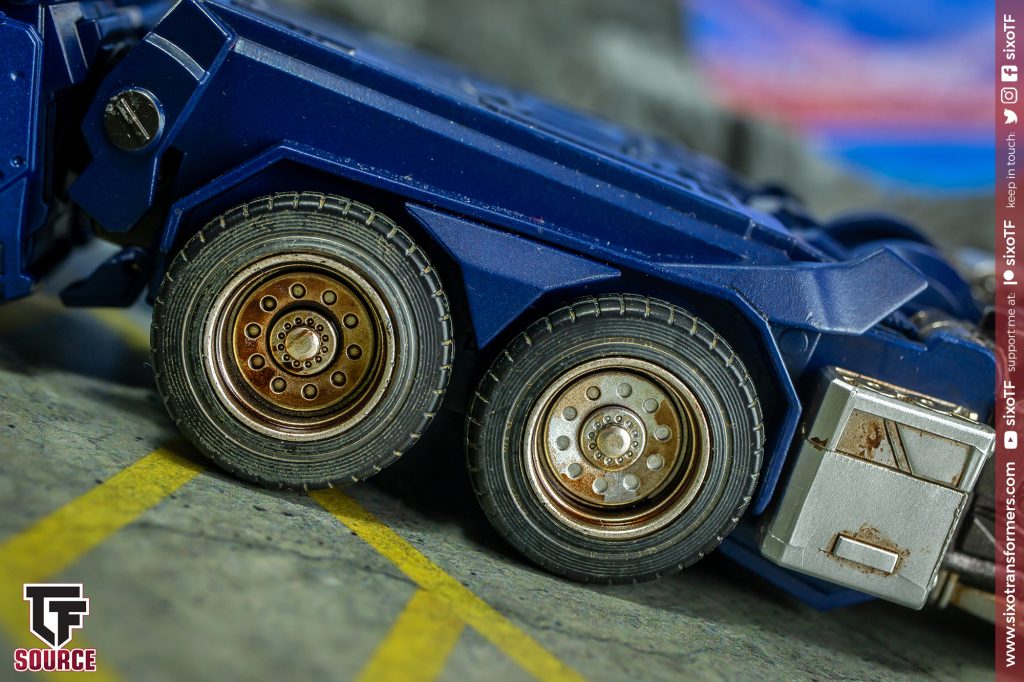 That’s also notable on areas such as the wheels, which, along with their rubber tyres, really do look great for not having a uniform pattern. Should you prefer then there are more “Cybertronian” wheel covers and alternate tyres available with this package, but given the truck mode’s overall Earthern appearance I am assuming they’re only really intended for use in robot mode. 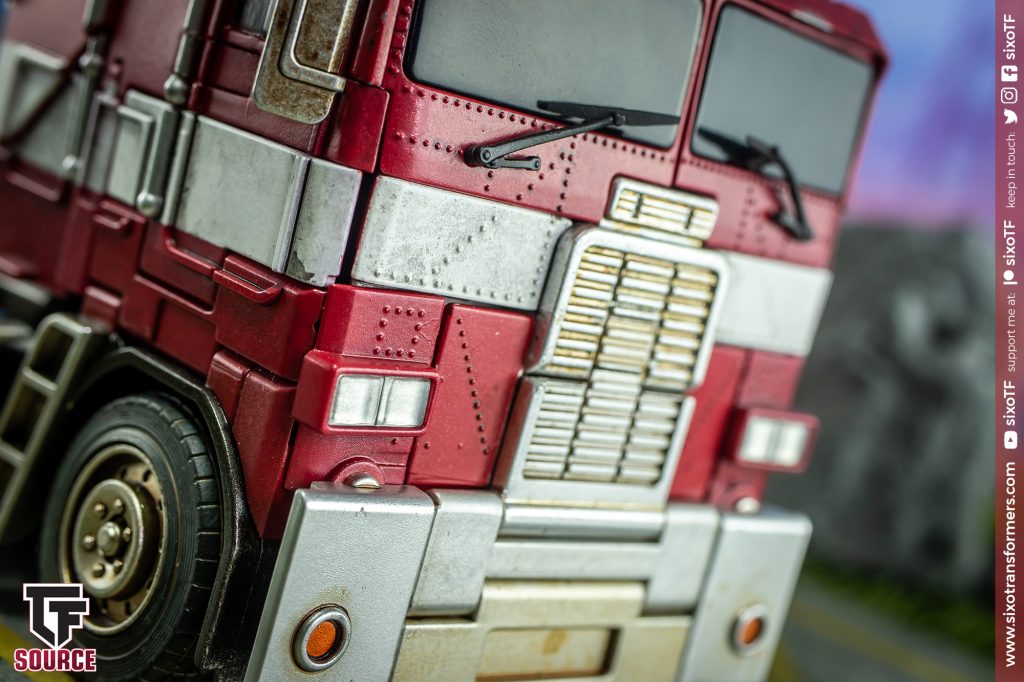 No doubt one of the best areas for detail is the front of the truck cab, which looks nothing shy of fantastic. It’s distressed to a heavy degree and manages to come off as ironically quite premium as a result. 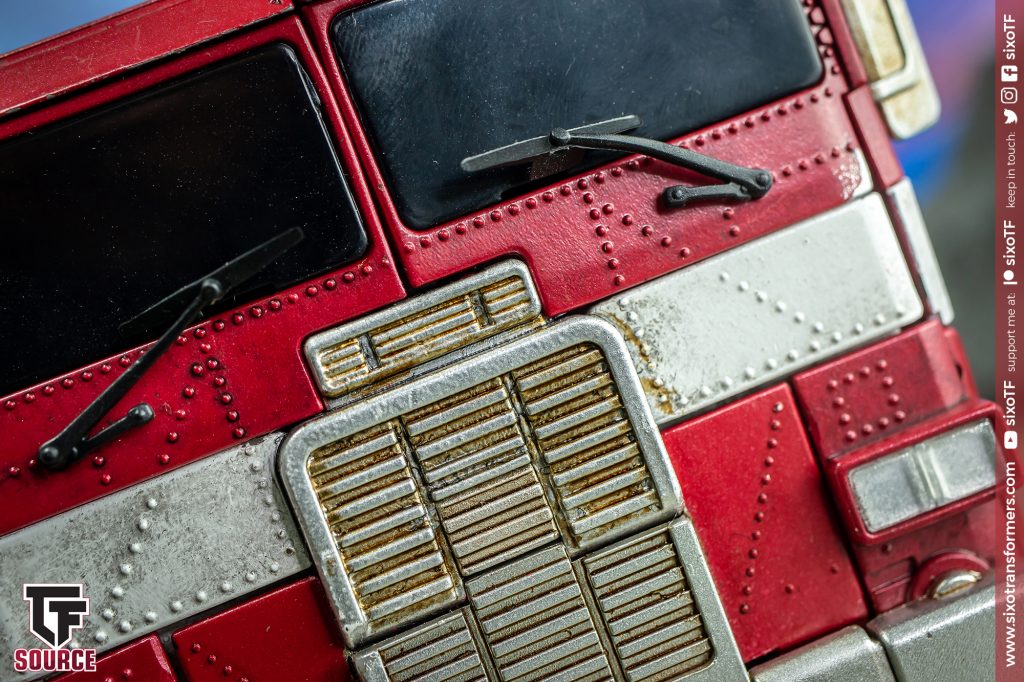 At this point I do have to stop and say how much I *loathe* those rubber winscreen wipers though! I’m not often compelled to type in such harsh terms, but they’re legitimately awful, a real bugbear of design that feel quite at odds with everything else going on here. They rarely want to play ball and stay in place looking suitably straight, and have a nasty habit of popping off if you so much as cough in the same room. Bad. 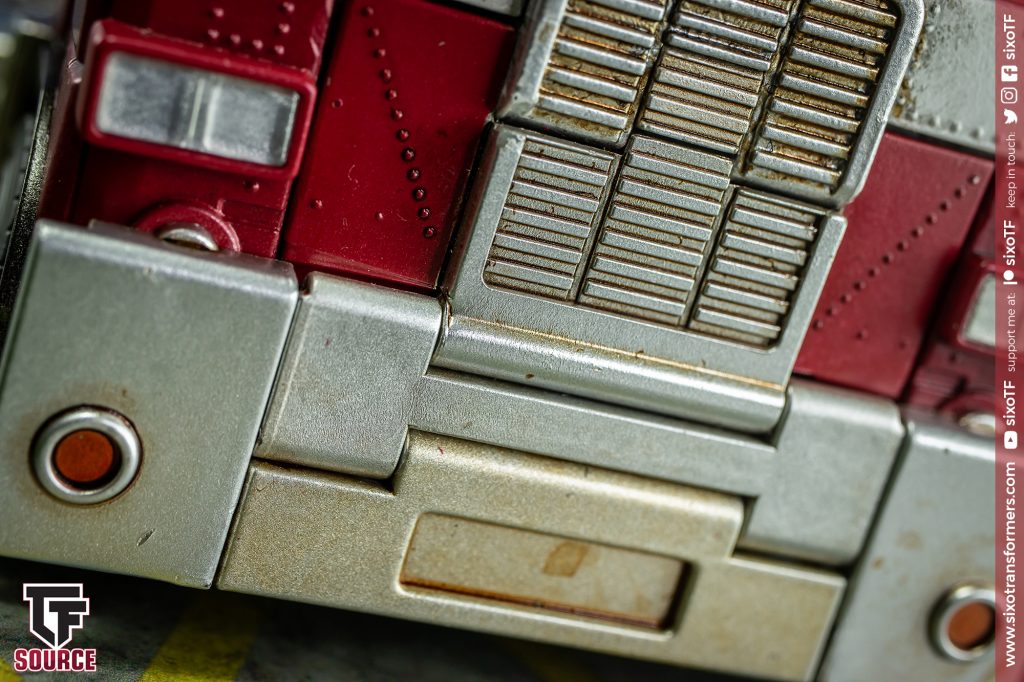 In the better news I really like how the areas such as the bumper and grill feel like a bit of a departure from the blinged-up chrome trappings of most Optimus toys, as the uneven weathering continues to make this toy feel like its own beast here. 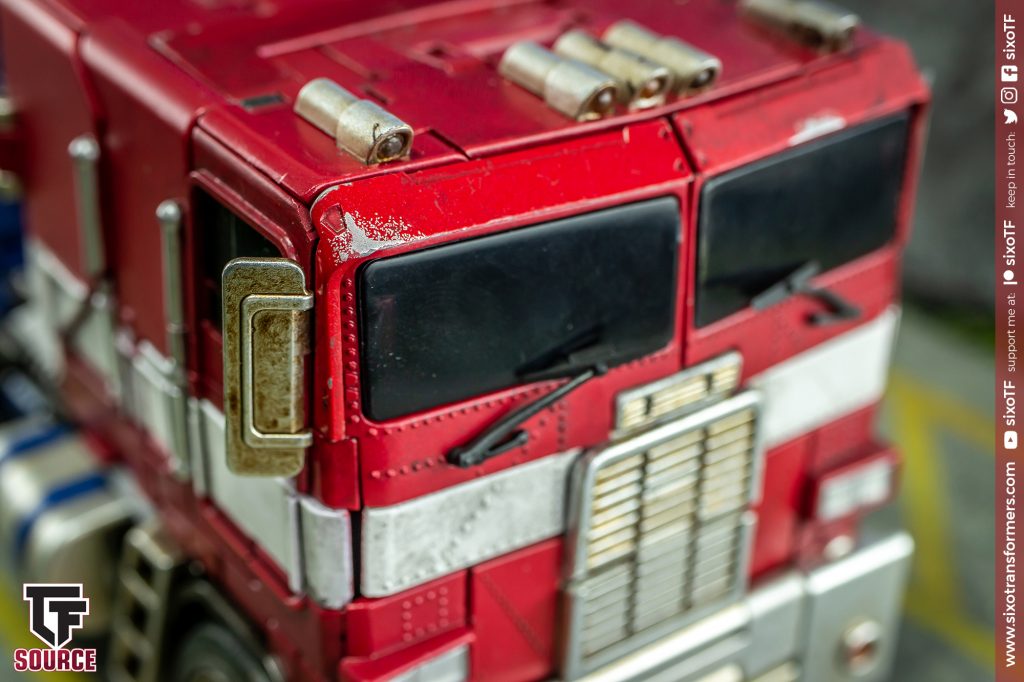 I’m also a big fan of the red paint found on this thing, which looks very striking in hand and shines through despite the murky nature of the finish. It’s unfortunate that my copy now has more than a couple of notable paint scratches though, at least one of which was present out of the box but a couple more which happened during transformation. It helps that the weathering can hide these to some extent as well, but it’s still something I’d rather not see happen so easily. 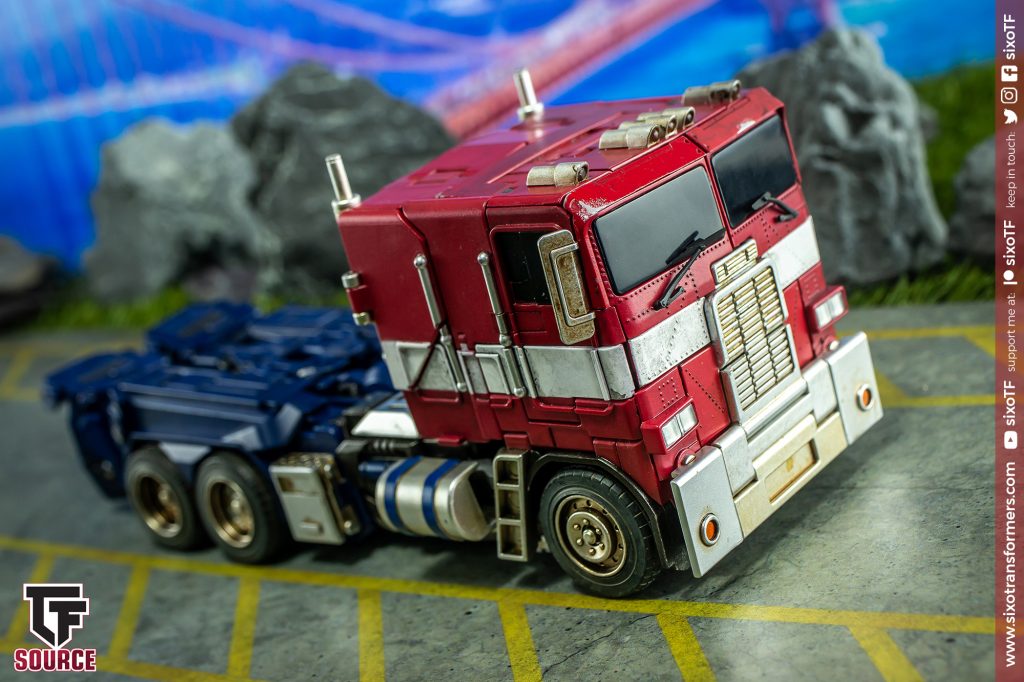 So, it’s a pretty toy. I mean, a really, really pretty toy. No denying it. In fact it may be one of the nicest Optimus trucks I have seen in a long time. 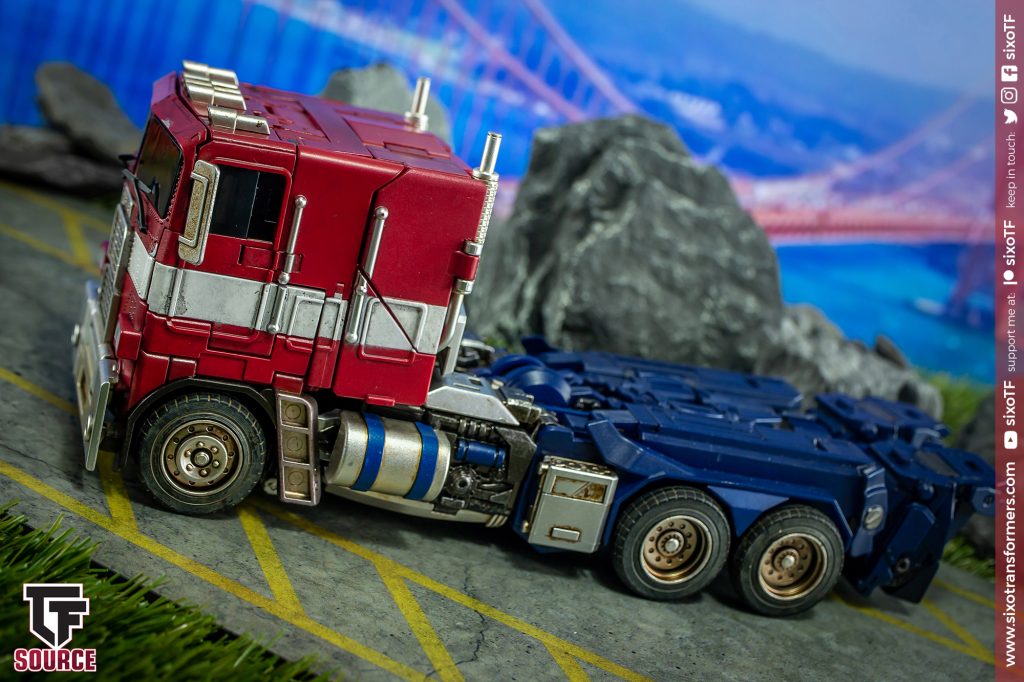 And you know what, once you get it all tabbed in it does actually feel very solid on the whole, too (at least in this mode). There are still various bits that need some readjustment every so often, mind, but on the whole it does a decent job at tabbing together tightly and feels suitably brick-like. 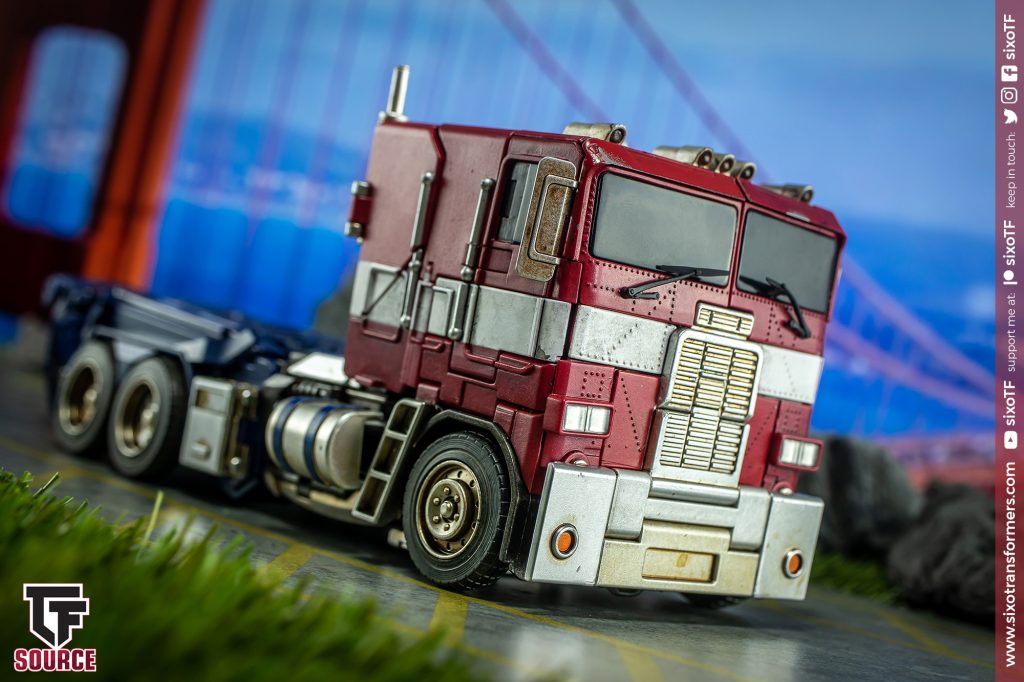 Perhaps my biggest gripe in that regard is the smokestacks, which are loose as anything on my copy and simply will not stay raised up in the way they’re supposed to be. It’s possible this could be fixed with a few dabs of floor polish, but it’s another example of where the handling of Freedom Leader doesn’t quite live up to the looks. 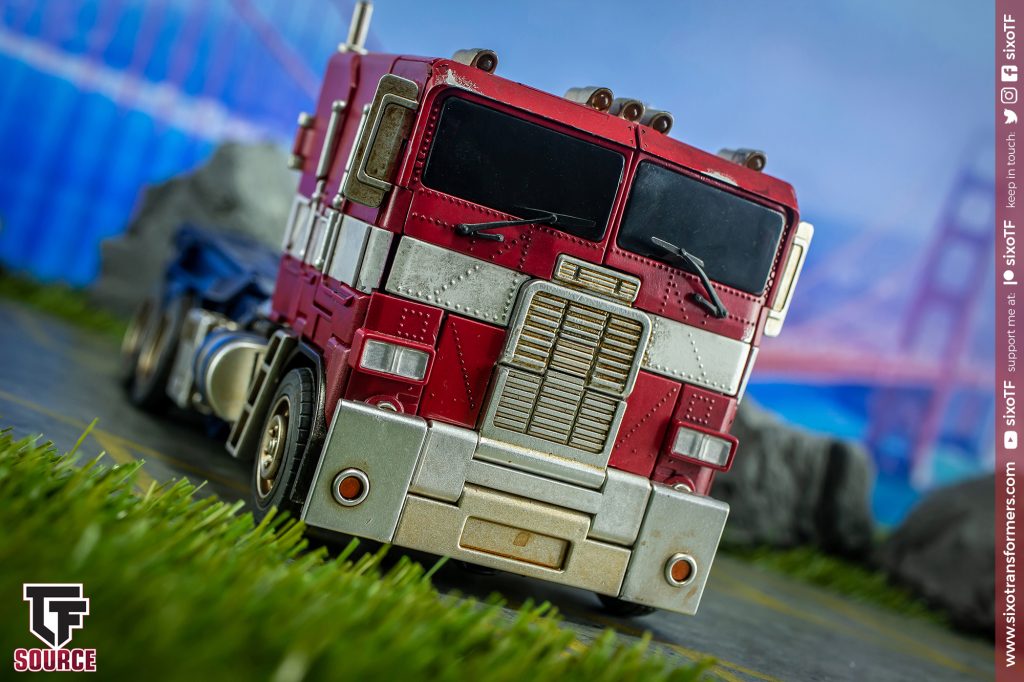 On the whole though, it’s easy to look at this truck mode and forget my transformational woes from the unboxing video. if you’re going to have to go through pain like that then at least the result has got to be worth it, right? 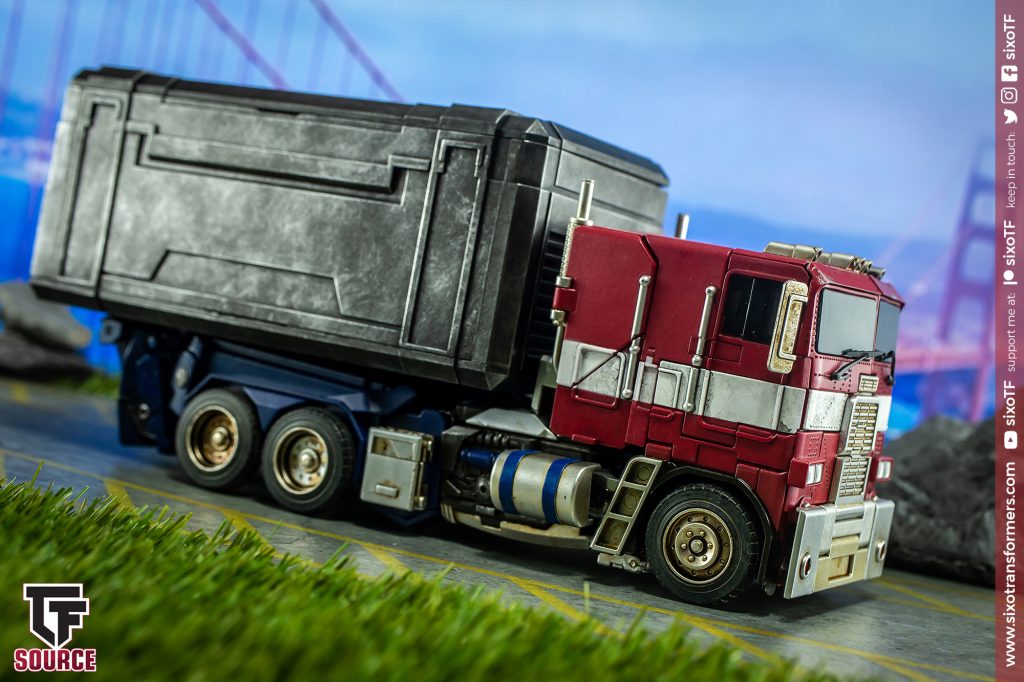 In terms of accessories, this toy comes with a veritable caseload of them. In fact, two cases, and they even supply those too! As I mentioned, although he does feature a few bits & bobs that change the appearance of the vehicle mode somewhat, it really seems like much of it is designed to work more with the robot mode instead, so we’ll take a look at all of that stuff next time. 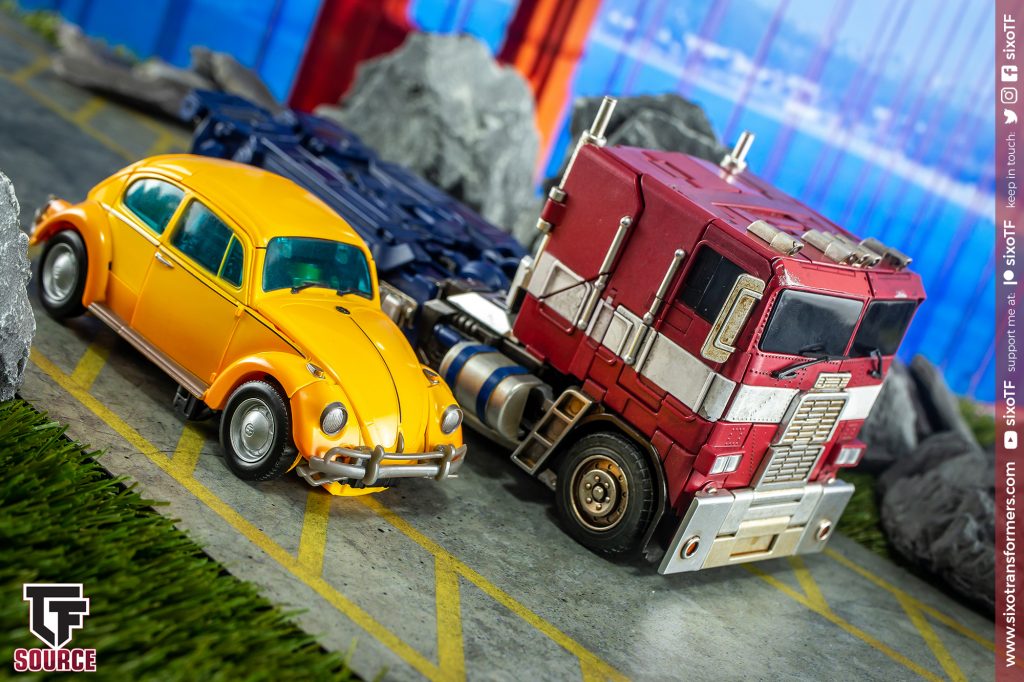 It’s also worth noting that Freedom Leader still feels like a bit of a standalone endeavour, in many ways. There have been various other attempts at 3PMP Bumblebee movie toys already, but nothing yet from Toyworld themselves to stand alongside him. I did find that Masterpiece MPM-7 looks rather good for a vehicle comparison though, and (SPOILERS!) if anything gives a taste of what the film could have delivered had the character not decided to change into a Camaro come the ending. 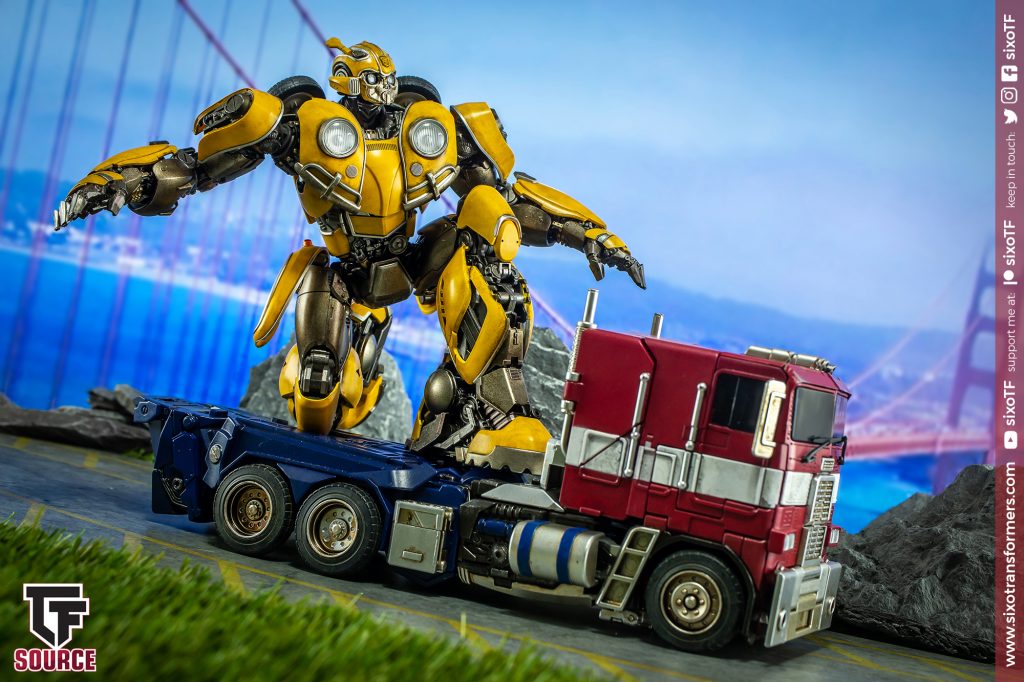 Then there’s also ThreeZero’s own DLX Bumblebee, which actually scales pretty well with Freedom Leader on the whole. Given he can’t actually transform though, you’ll have to get a bit creative with how you display them together here! 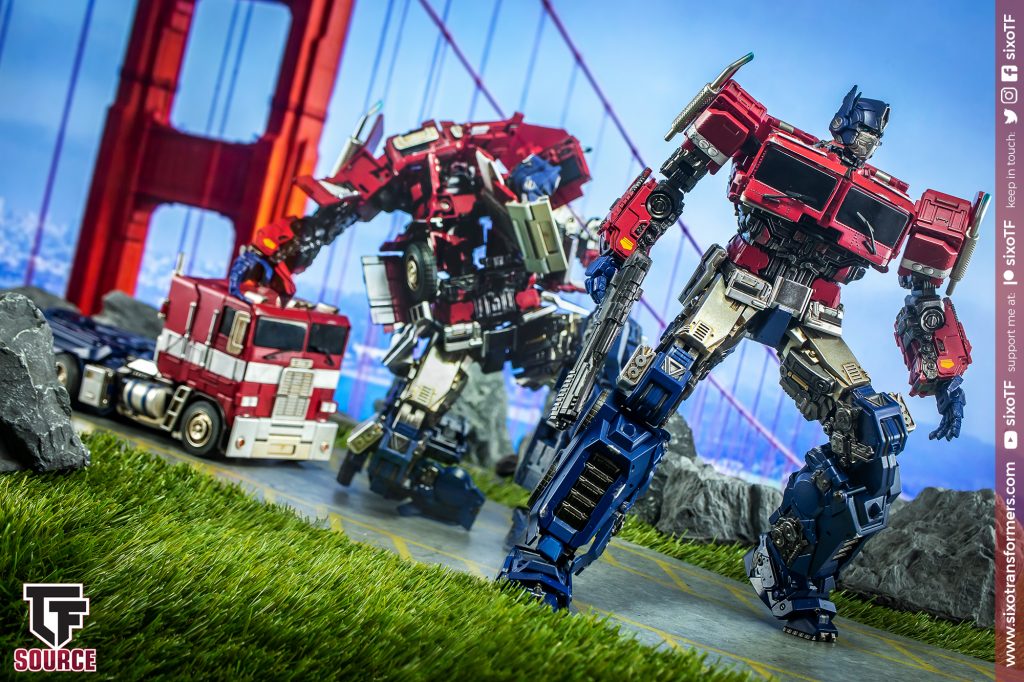 So, Freedom Leader has certainly put in a decent-enough showing in his vehicle mode so far, and may actually be winning me over a little from my final impression during the unboxing effort, but how will he fare once we get him back into robot mode? Yep, it’s time to transform him again… so join us next time for the result!