COUNTDOWN: 39 Transformers tweets from December that need to be seen! 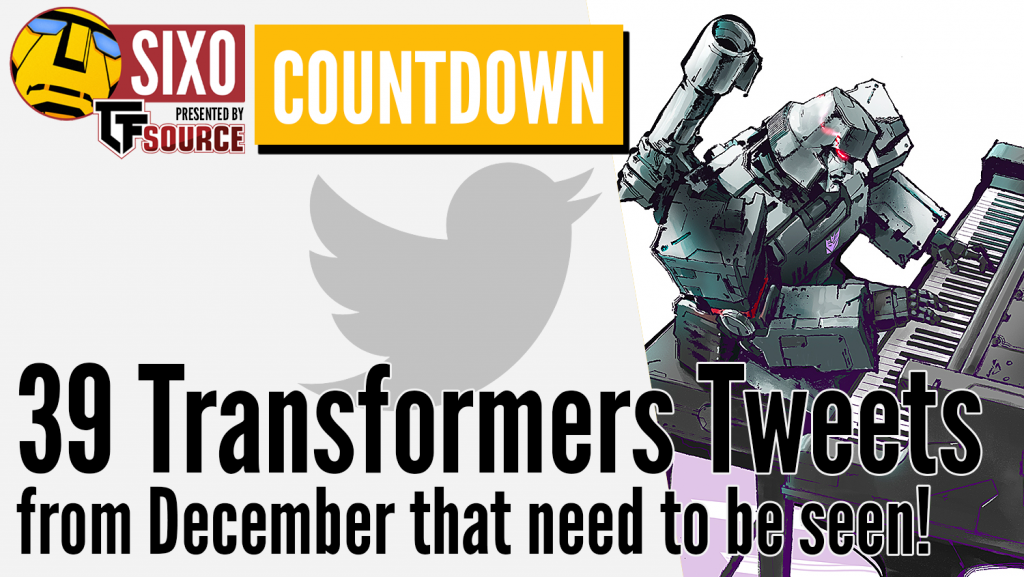 Remember 2020? What was all that about, eh? Somehow we’ve sailed right through the holiday season and we’re already nearly two weeks into a brand new year already, which means we’re well overdue a look back at the very best of Transformers Twitter for December!

So, here are 39 tweets that need to be seen, presented (mostly) in date order (but not really!). Happy new year, folks!

This isn’t the first time we’ve highlighted the incredible artwork of @marble_v_ and with offerings like this, it won’t be the last, either!

IDW Tarantulas, built, painted and photographed by me 🙂
Design by @NickRoche, colours by @jcburcham pic.twitter.com/hq8ojaGNtB

Exceptional custom work has become a hallmark of these lists, and this entry was just too creative not to feature. Fantastic!

It’s true, I think about that prototype Banzai-Tron like *all the time*.

There was a lot of excitement brewing about the new Beast Wars Generations book over December, and many of us couldn’t wait to receive our copies after tweets like this!

And people say Masterpiece collectors have too many Primes!

This is beyond adorable.

There have been other Jurassic Park-themed Hound customs in the past, but I think this might be my favourite yet!

Don’t think about it too much.

It’s been great to see G2 Megatron getting some love recently thanks to the new Generations Selects toy, and this rather spiffing artwork is a wonderful example of that!

I got to work on Airazor's beast mode! We tried to add as much anatomical and textured surface detail as we could without disrupting the transformation. Feathers were considerably more involved than Cheetor's fur. https://t.co/wAmWpoTVLU pic.twitter.com/CwvcaA54ZU

Everyone agrees that the new Kingdom toys look amazing, no? Well, Airazor is definitely one that a lot of fans are most excited for, so this tweet showing some of the figure’s design is particularly interesting.

A possible solution if you’re seeking ideas for tree ornaments.

You know I'd be curious to see how a restoration of Headmasters would be like… pic.twitter.com/FYvhQEwtIi

Take a look at the FIRST images of the 1999 TV Magazine Colour Competition Beast Wars II Galvatron toy!!
It's taken 21 years to finally get an image of this exceptionally elusive figure.

It’s always fun to read about previously-unseen rarities from days gone by, and these are some of the rarest!

Zooming it with the legendary Peter Cullen, like a boss. Goals.

I may have made it known that I have a bit of a fondness for Action Masters before, so naturally I love this.

That awkward relatable moment when you fall out of your vehicle mode pic.twitter.com/RoFhMPd2CW

There have been many great examples to highlight the goofiness of Earthrise Arcee’s transformation, but I think this one wins.

I would love to know what he’s playing.

What an exceptional line-up!

Fun fact. This all in scale! pic.twitter.com/wNqNIo4T8o

Scale is definitely one of the most interesting aspects of Transformers collecting, although the sheer absurdity of it all is expertly demonstrated here.

It was a wonderful time.

Now this one *really* blew up.

My childhood dreams have been realized. I have a toy for a character I voiced. Thanks to @roosterteeth & @netflix for making this possible & to @hasbro for this fantastic character. #Elita1 means so much to me. I hope you all love her as much as I do. #elitaarmy @transformers pic.twitter.com/OLUUImzAoL

This is a custom based on a @Guido_Guidi idea, and it came out very nicely indeed!

I've been teasing it for weeks now, but now it's finally done and ready to be shown off to the world at large – my custom Transformers WFC Lugnut Supreme!

Bow down before his GLORY!

This tweet is actually from October but still worth sharing as it’s just the absolute nuts.

He IS real! #Transformers pic.twitter.com/ocpPcRzaLT

Of all the many seasonal TF tweets I saw, I think this was my personal favourite.

Incredible work from the talented Mr Gorman, as always.

I have watched this too many times.

You would think Thrust would be most remembered for when he destroyed Teletraan I, but somehow it’s getting run over instead.

Sea turtle Megatron is best Megatron. All others pale in comparison. pic.twitter.com/SaQL8D3o6s

So there was some old concept artwork for a few unproduced Beast Wars McDonald’s toys unearthed last month and, well, it’s amazing.

On their way to ruin Transformers forever pic.twitter.com/LY0MKpUoHx

It really does, though.

So that’s our list. Happy new year, everyone, and here’s wishing you all the very best!

COUNTDOWN: 39 Transformers tweets from December that need to be seen!