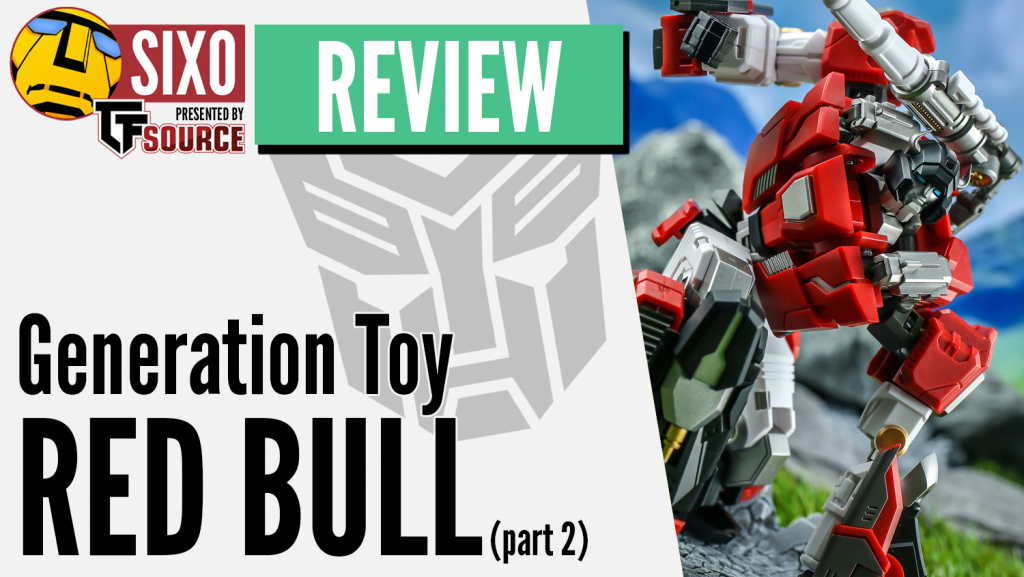 Welcome to the second part of our pictorial perusal of Generation Toy’s latest T-Beast-inspired effort, Red Bull. In the first half of the review we took a gander at that rather awesome animalistic alt’ form, but just in case you thought it was all a load of bull then we’re here to check out the robot mode too! 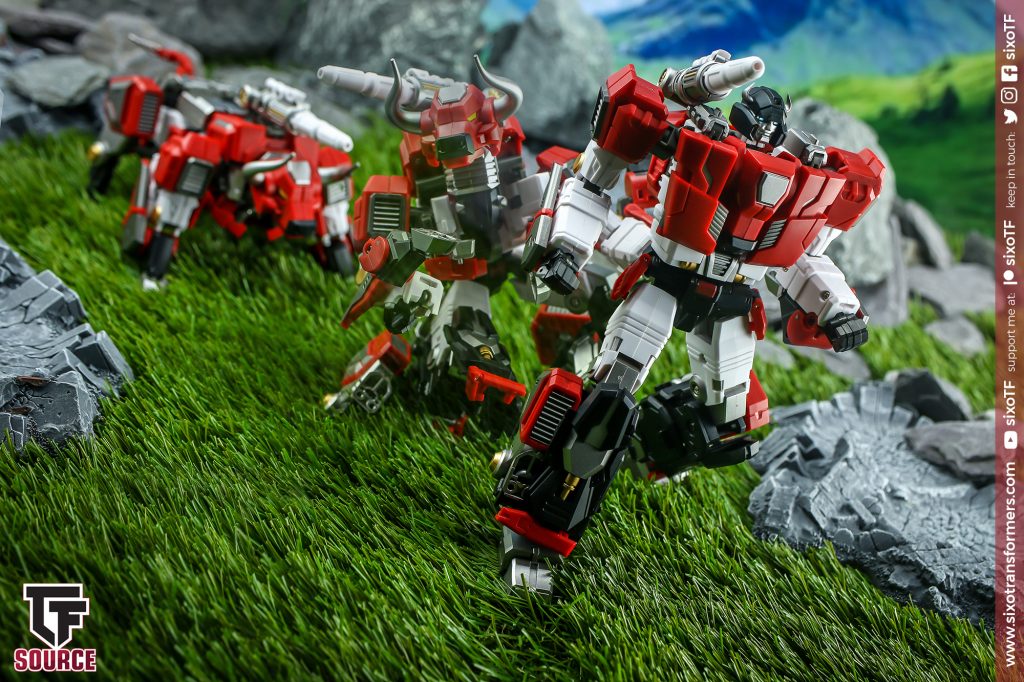 First things first, of course you have to transform the thing! I’ve not exactly handled a wealth of Generation Toy’s output, but Red Bull here seems to line up nicely next to what I have seen in that it’s a fairly straightforward and not-overcomplicated transition with everything tabbing in quite snugly come the end result. I particularly like the way in which the robot mode chest so cleanly comes together, and despite initially seeming like a bit of a headache, even the legs have proven to be a fluid affair on repeat efforts. 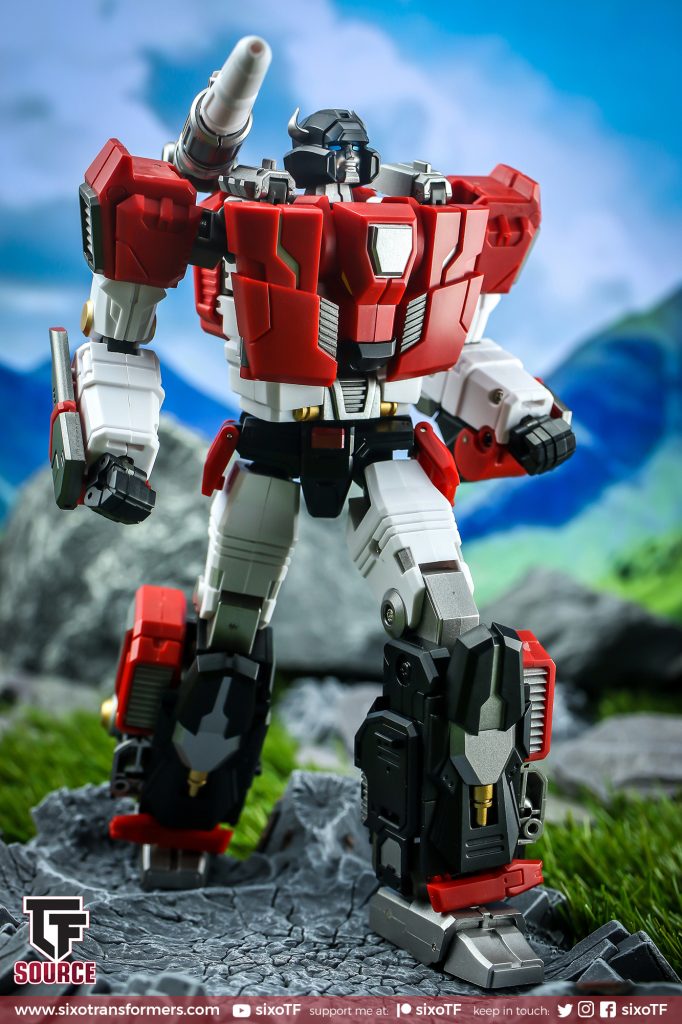 And of course you’re left with that dashing robot mode, which presents the character in surprisingly classic style. Seriously, other than a slight peep of the bull’s head from the chest (and perhaps the rather obvious nod of the horns on the robot noggin), you could honestly be forgiven for not realising this wasn’t just classic Lamborghini Sideswipe. He looks fab! 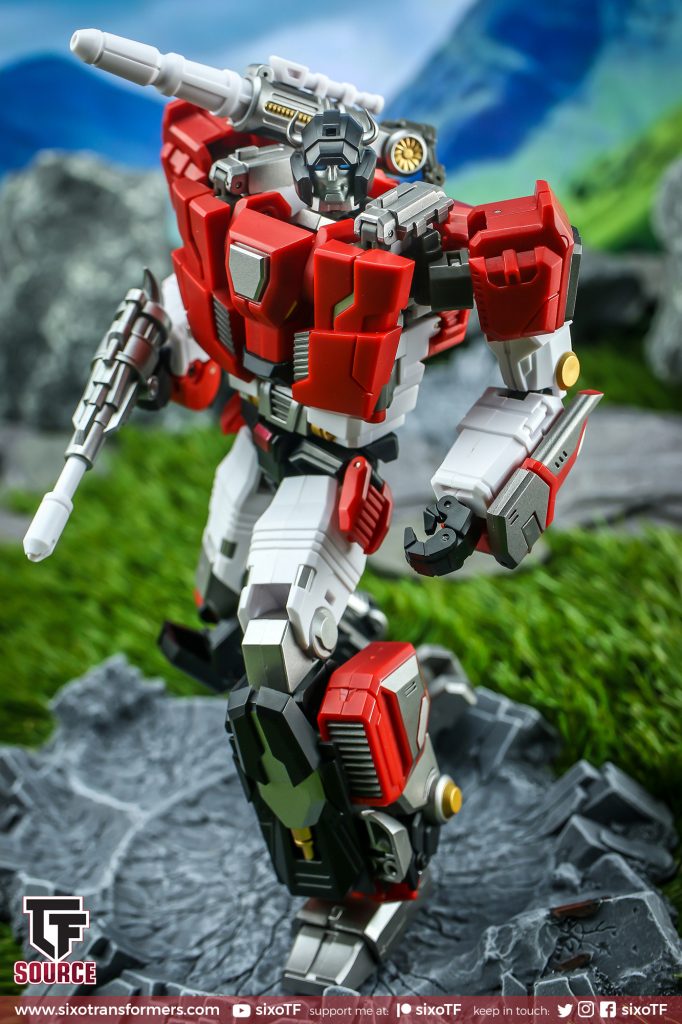 In many ways I think that’s a huge part of the appeal. Had the design just chucked all notion of the original character out of the window then somehow this would have been less successful, but to see such an original take on his alternate form contort into such an instantly-recognisable the robot mode? Somehow it just adds to the charm. 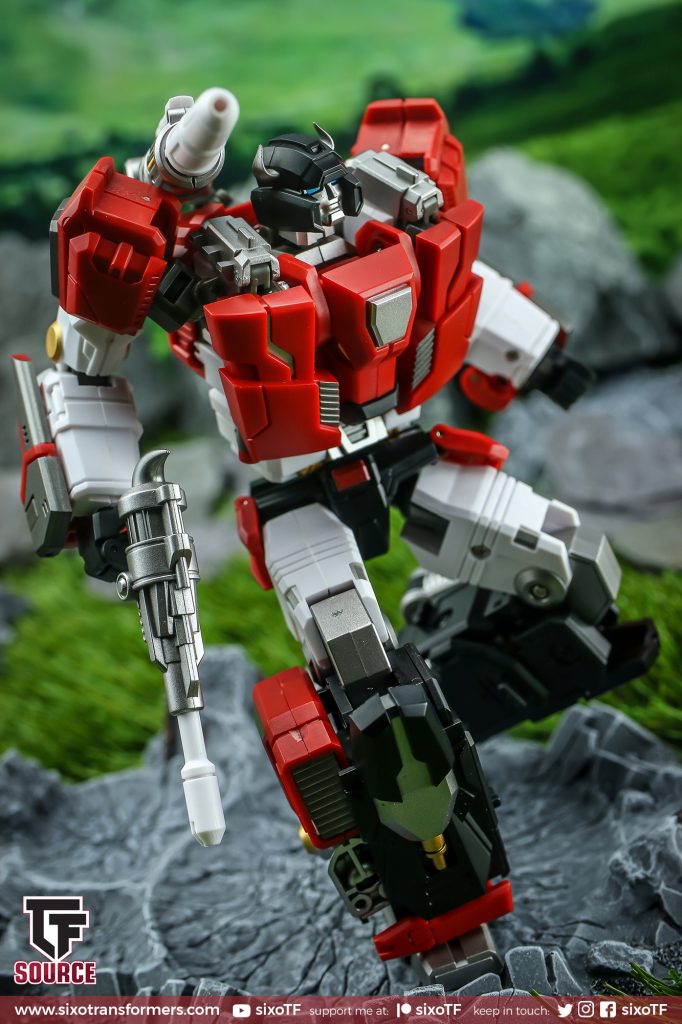 And charm is something that’s certainly not lacking here, let me tell you. Besides the obvious first pass in terms of looking like the intended character, there are a lot of handsome design elements and well-thought-through proportions that all add up to an appealing aesthetic in general. 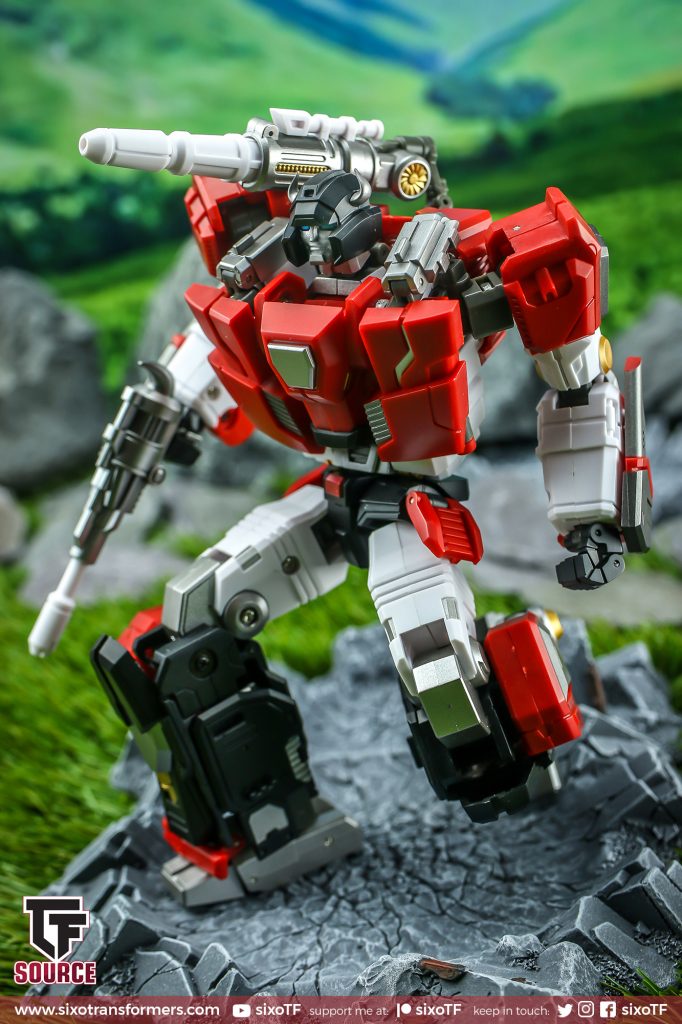 He retains a slightly bullish presence from his alternate form, with a stocky stature that makes him appear ever-ready for battle, yet I really think it works well for the character, too. Perhaps the biggest compliment I can say here is that Red Bull “feels like” Sideswipe in every sense. 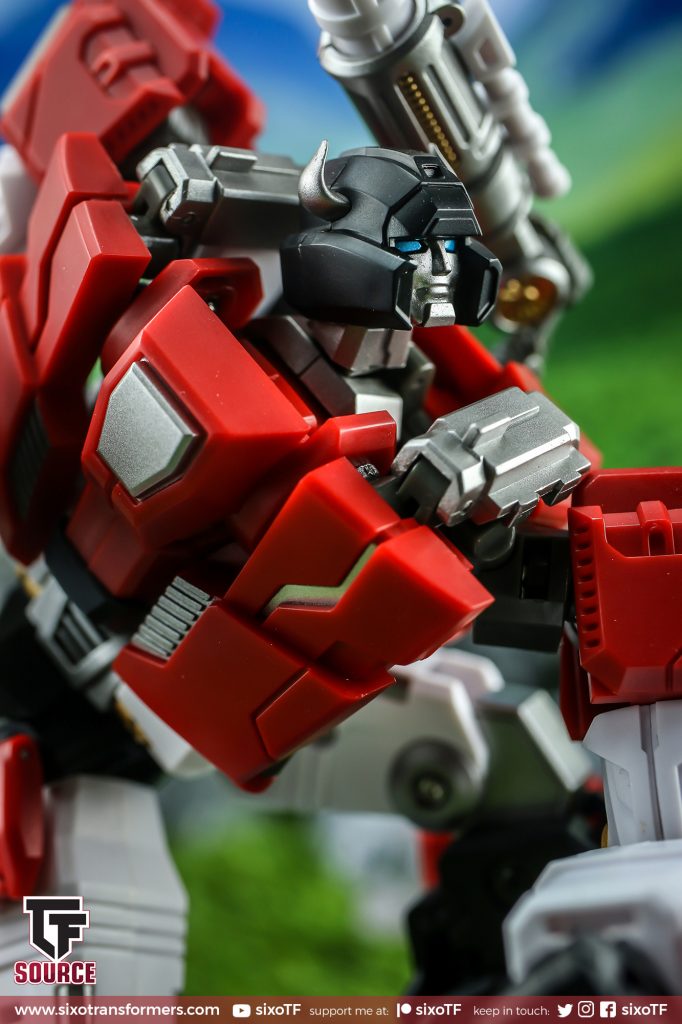 No doubt that a large part of that is the head sculpt, too, which proves to be a bit of a dead ringer for the character in question. 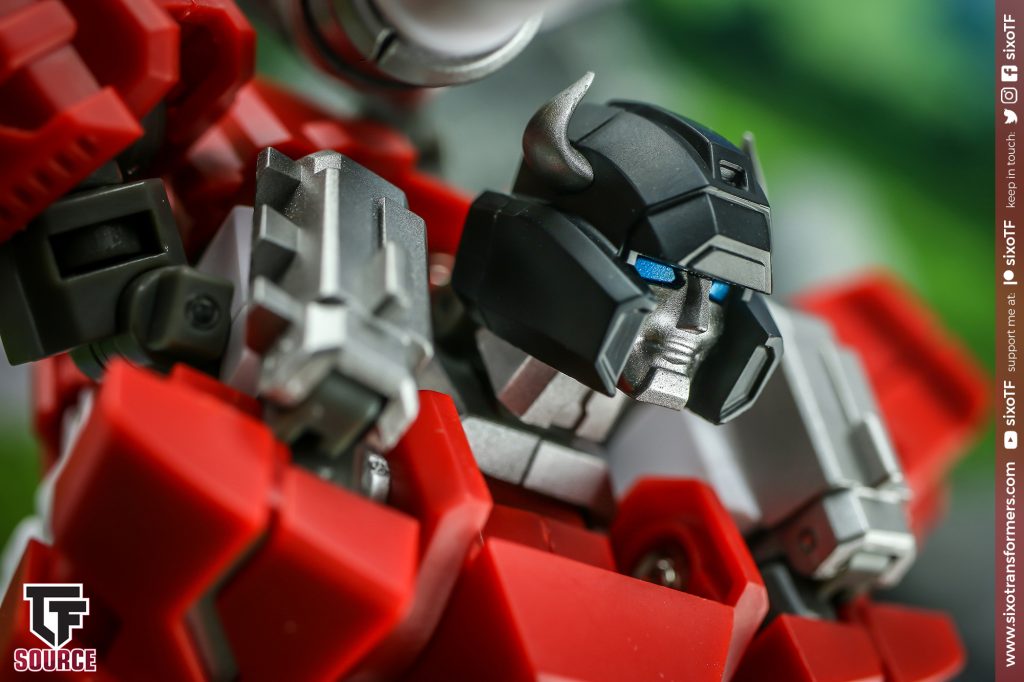 It amuses me to see just how close this figure leans into the Masterpiece MP-12 design in many regards, and never is that more evidenced that in that face. It really helps to make this toy feel like some weird alternate universe depiction, but either way it looks suitably smashing with an adorable set of baby blue eyes. 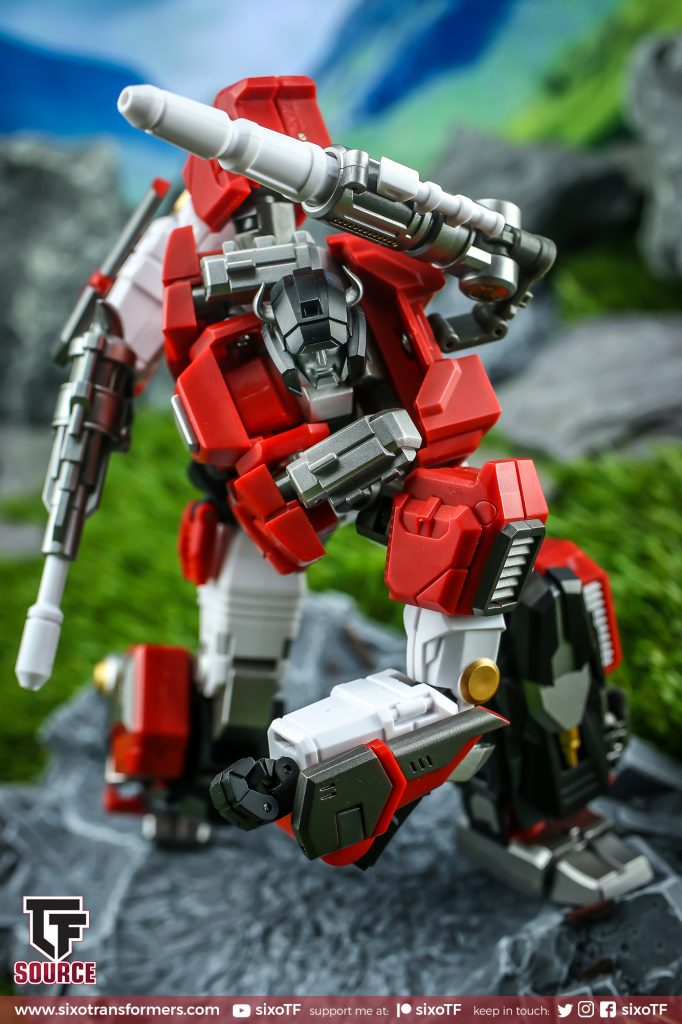 It’s not just good looks though, as this thing handles rather well, too! He’s bestowed with a more-than-your-average share of articulation range, meaning that it’s easy to have him posed up in all manner of dynamic ways. 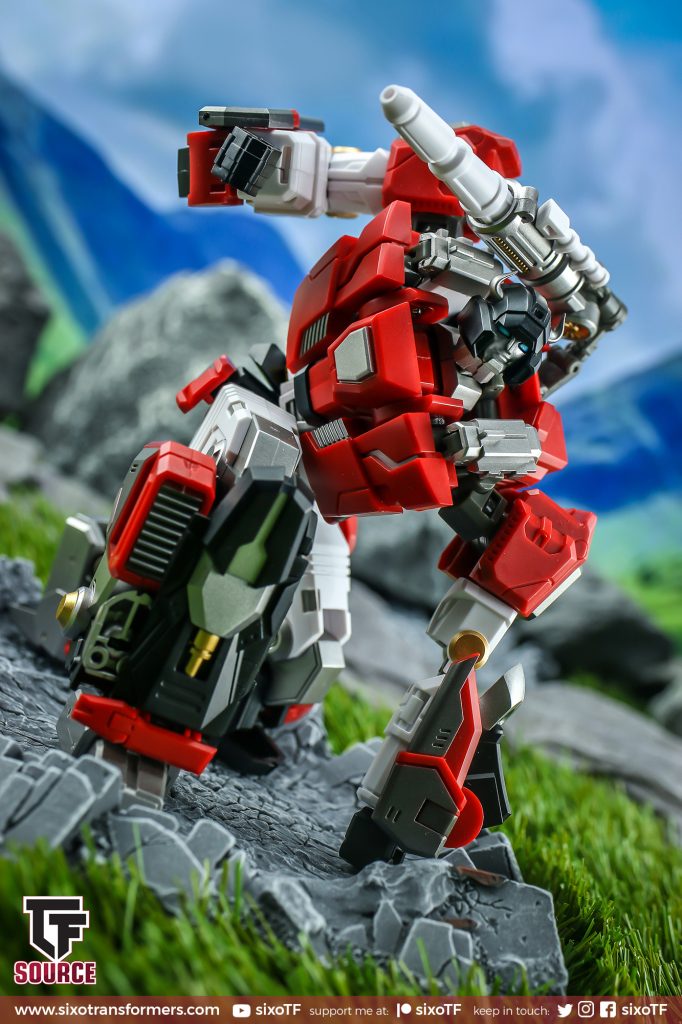 The knees, hips, waist and elbows all have that little extra bit of give in them, and joints such as an ab crunch and additional butterfly hinges at the shoulders are hugely appreciated too. I had great fun putting him though his paces in front of the camera. 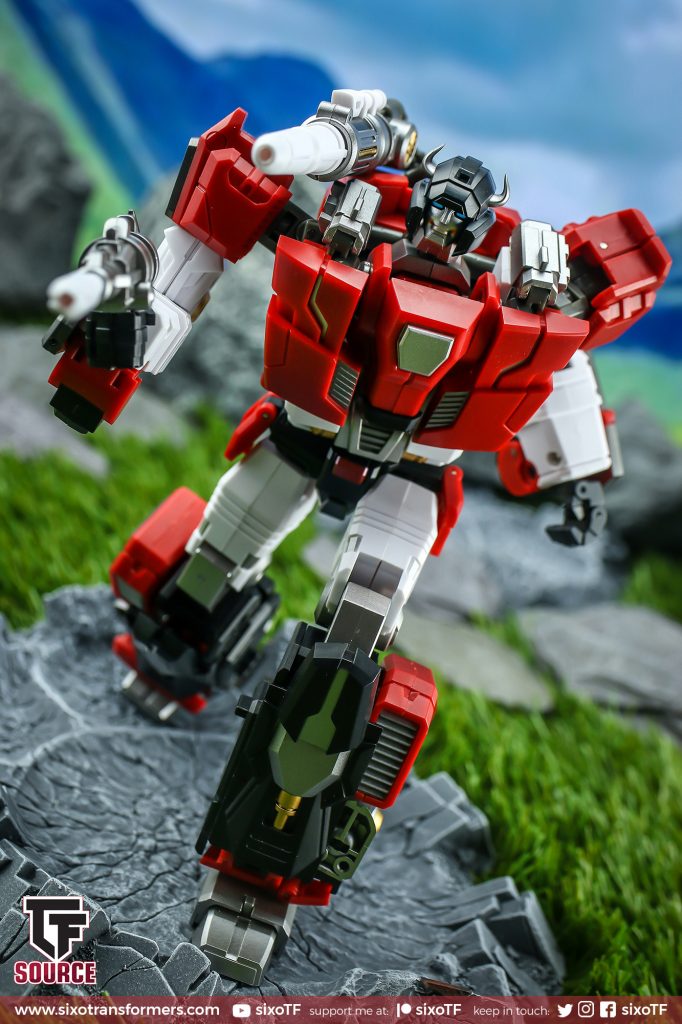 Sadly, there is one major flaw that holds this guy back from being truly tremendous overall, and that’s the frankly unforgivable hands. 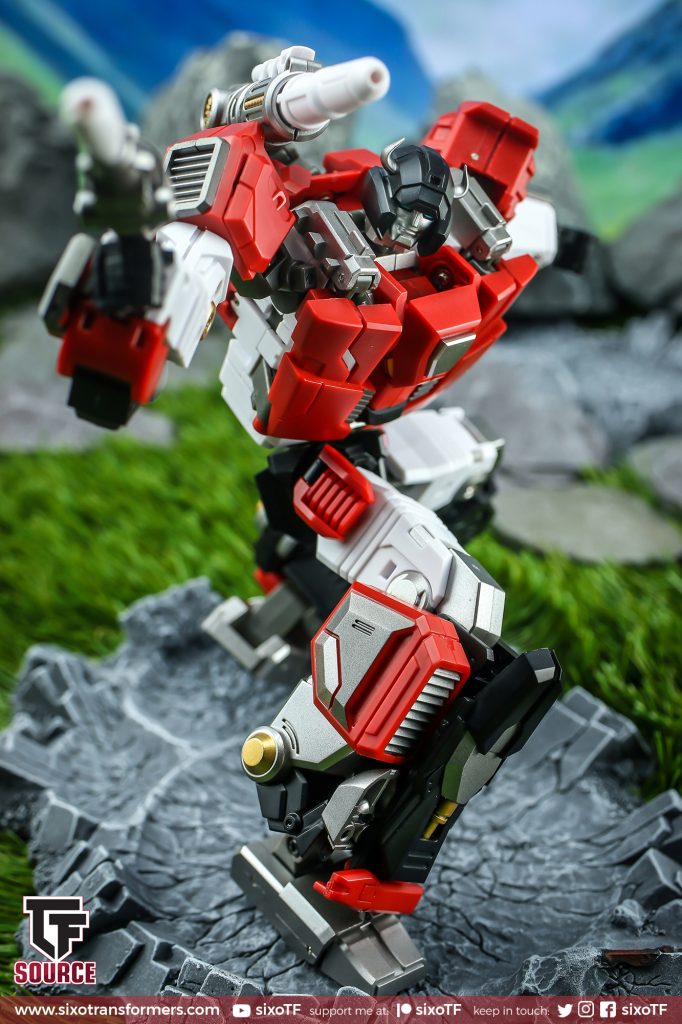 First things first, the wrists are appallingly floppy, and simply will not stay in place at all. They wobble around all over the shop even when not holding his gun, but with it tabbed into the palm you can pretty much forget about them resting as you want them too. 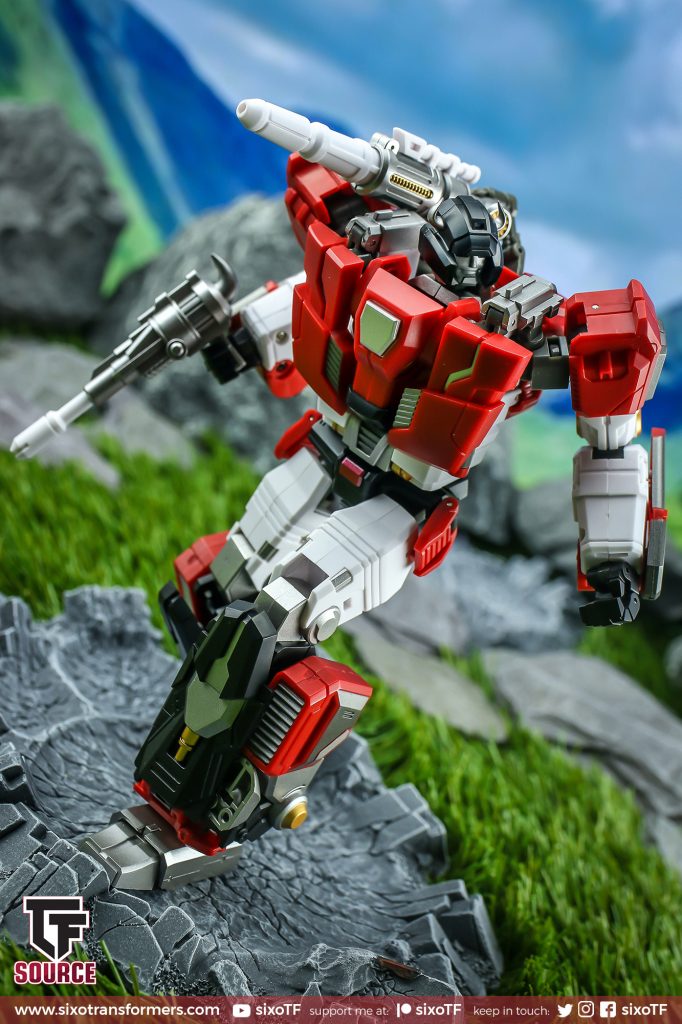 Really, the decision to have the wrists mounted on ball joints was where this came undone, I think, but even then the quality control here just isn’t up to snuff. I’m sure the loose wrists can likely be fixed with a dab of glue to make the ball joint fit in the socket a bit better, but to let such an obvious error go during production is very frustrating indeed. 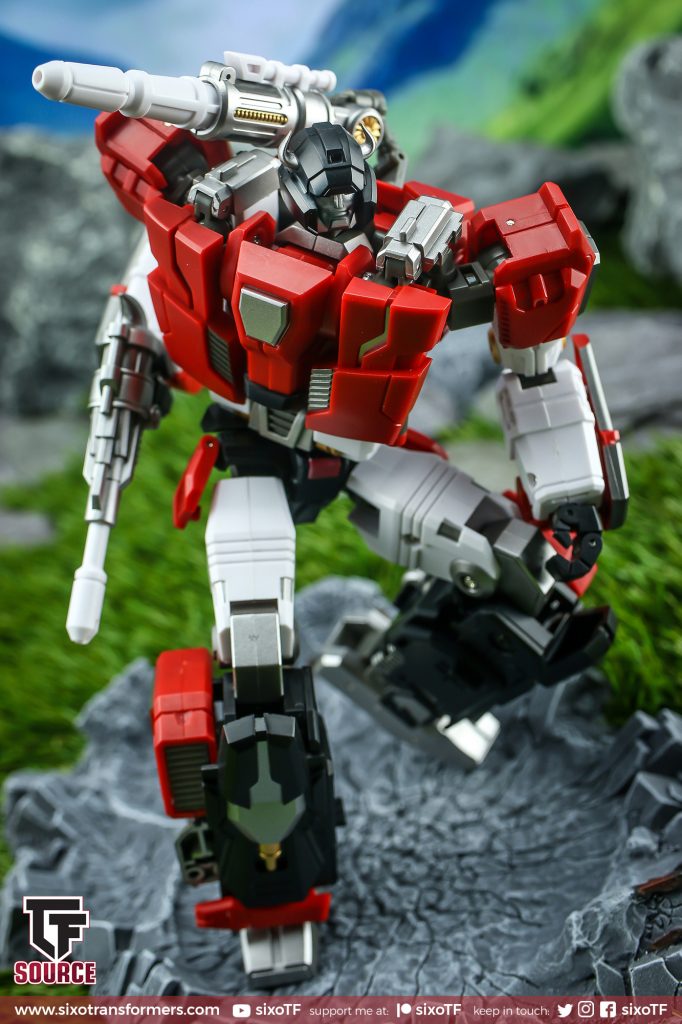 I will add though that I’m just not a fan of the hand design itself, either. The fingers and thumb do have a spot of articulation to them, but it doesn’t really add up to much and detracts from this fella feeling like a Masterpiece-level effort on the whole, unfortunately. It’s a weird one as it could have been so easily solved with just a tiny spot of better design, but somehow the hands come off as a very lacklustre part of an otherwise excellent toy on the whole. 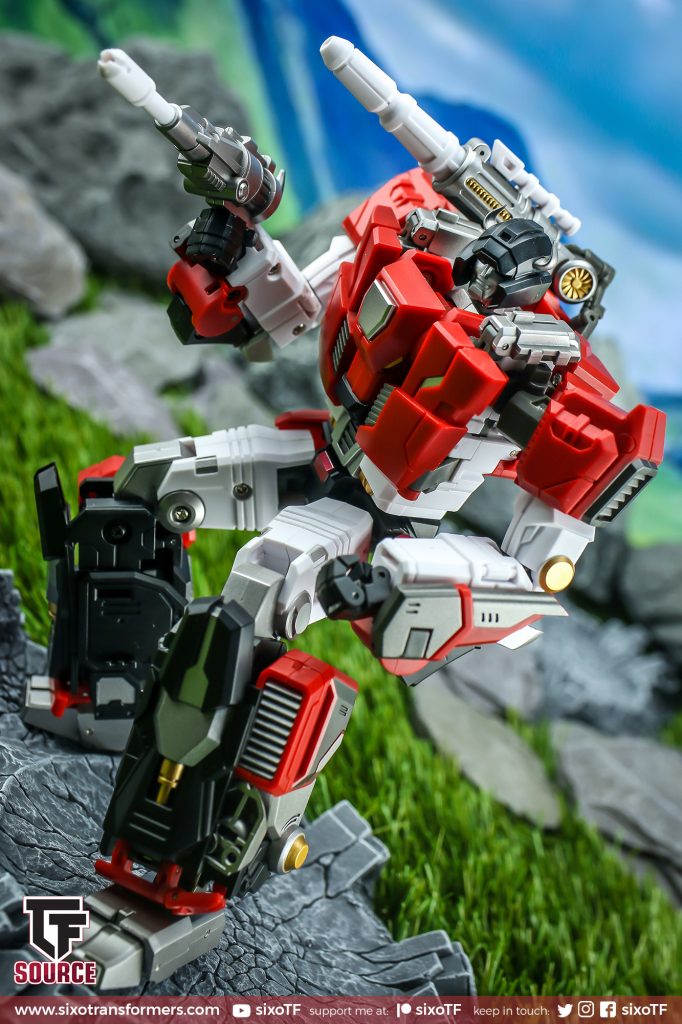 Is it a nitpick? Maybe, although I will say that it is something that grates when messing around with this guy, and so is hard to overlook. 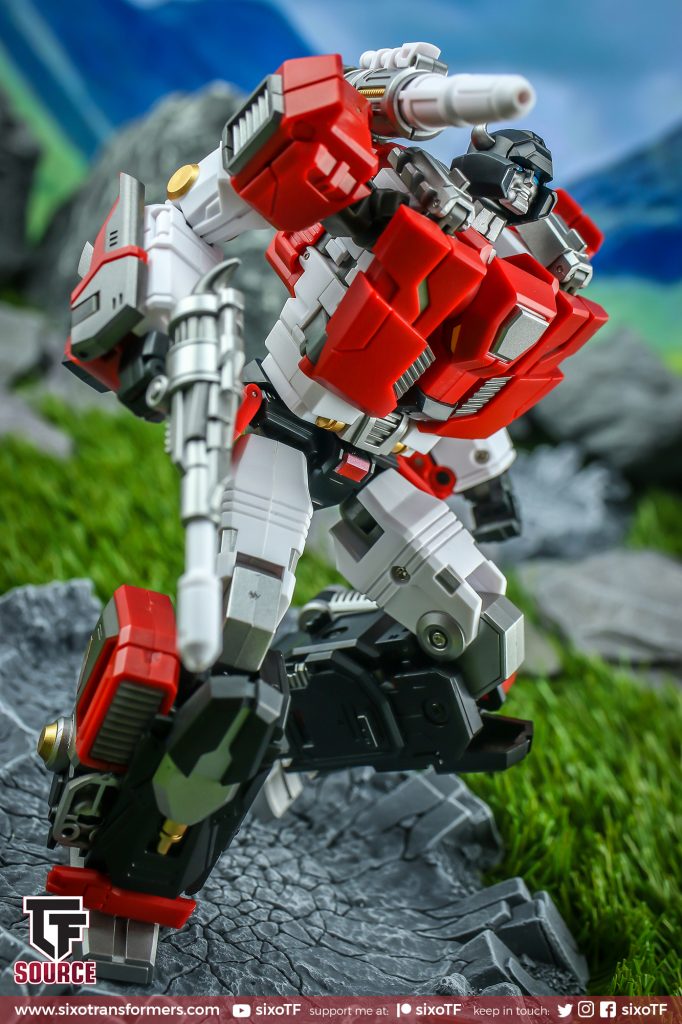 The other thing I’m somewhat less keen on here is the shoulder-mounted weapon, mostly because it isn’t actually shoulder-mounted at all! That articulated hinge from the back of the bull mode has it swung upwards to sort-of sit in the right place, but it doesn’t attach in any way and so looks a little awkward from the wrong angle. 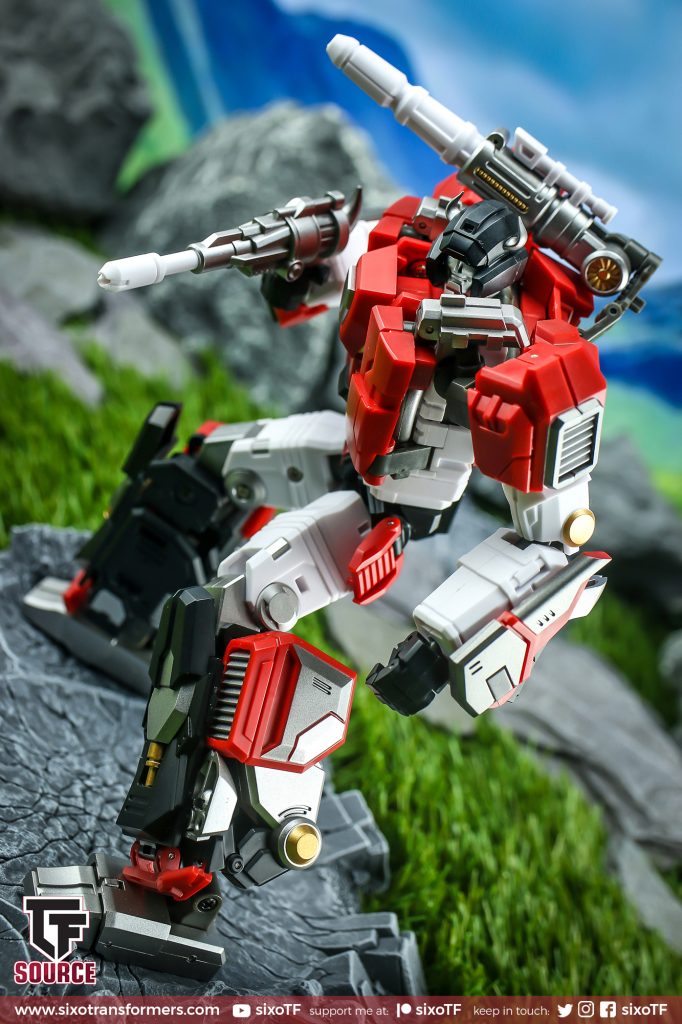 The arm itself does feel somewhat flimsy too, although it’s lack of any kind of proper positioning for this form is what bugs me the most. It ends up looking a little undercooked, with the shoulder weapon just sort of hovering in roughly the right place, as opposed to feeling in any way purposeful. 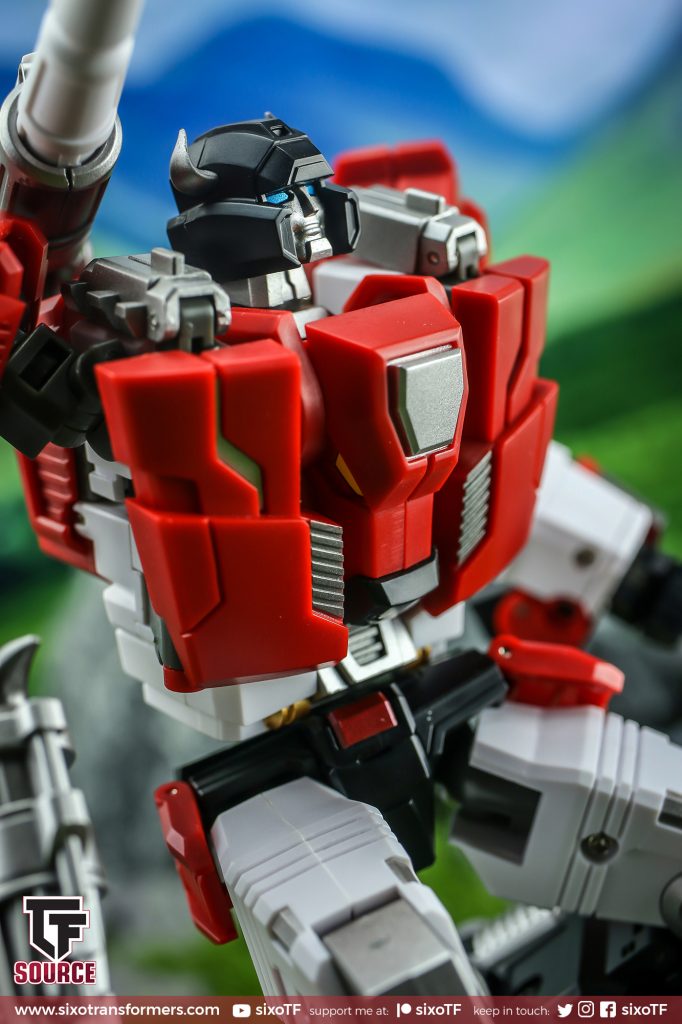 Still, those issues aside, there really is a lot to love here otherwise, and if you can fix the wrists then I’d say there’s a decent chance of being able to give the shoulder weapon solution a pass, at least. 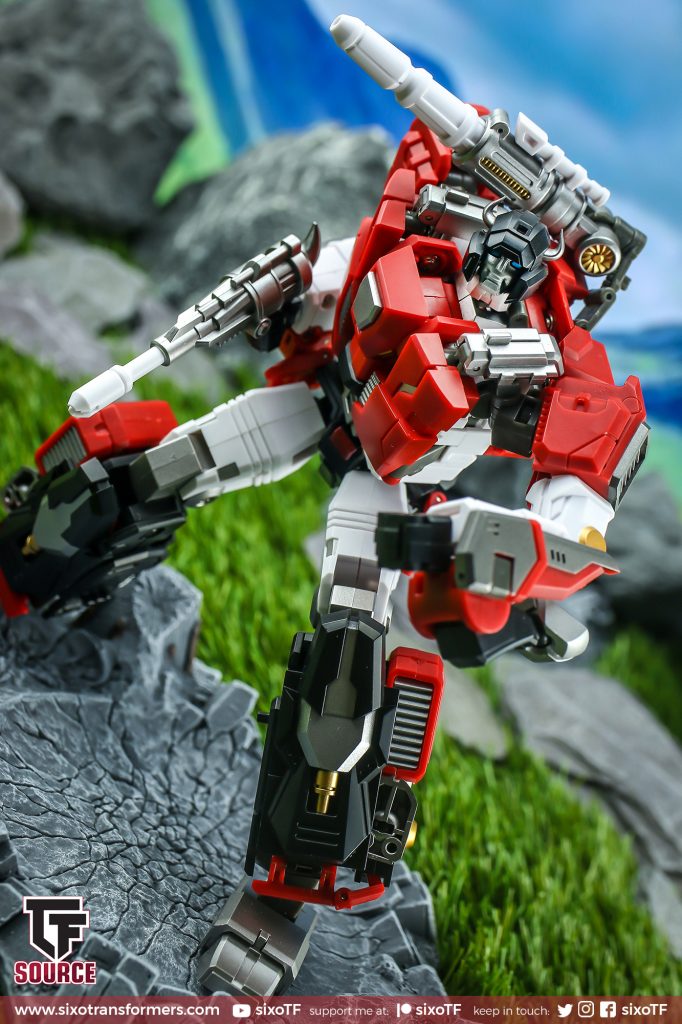 Besides, he really does look the business overall, so on balance it definitely works out to be a favourable experience! 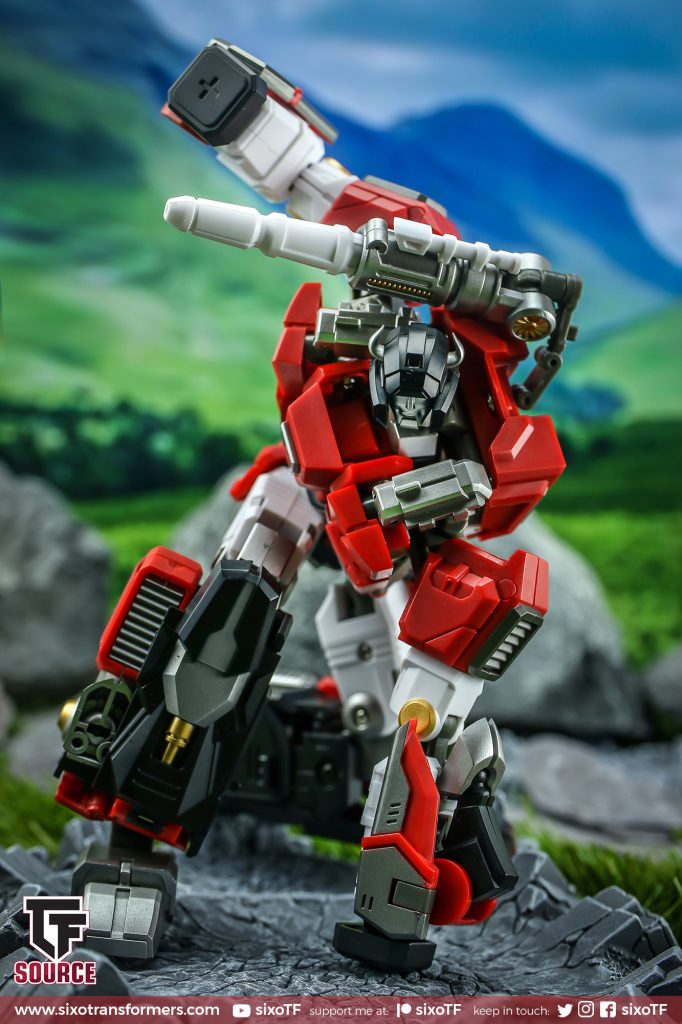 In terms of accessories there is of course the rifle, which looks fab with a pair of cute little personalised horns on the sides. Then you naturally have some piledriver add-ons for his arms, because every Sideswipe toy needs to feature such a thing these days! 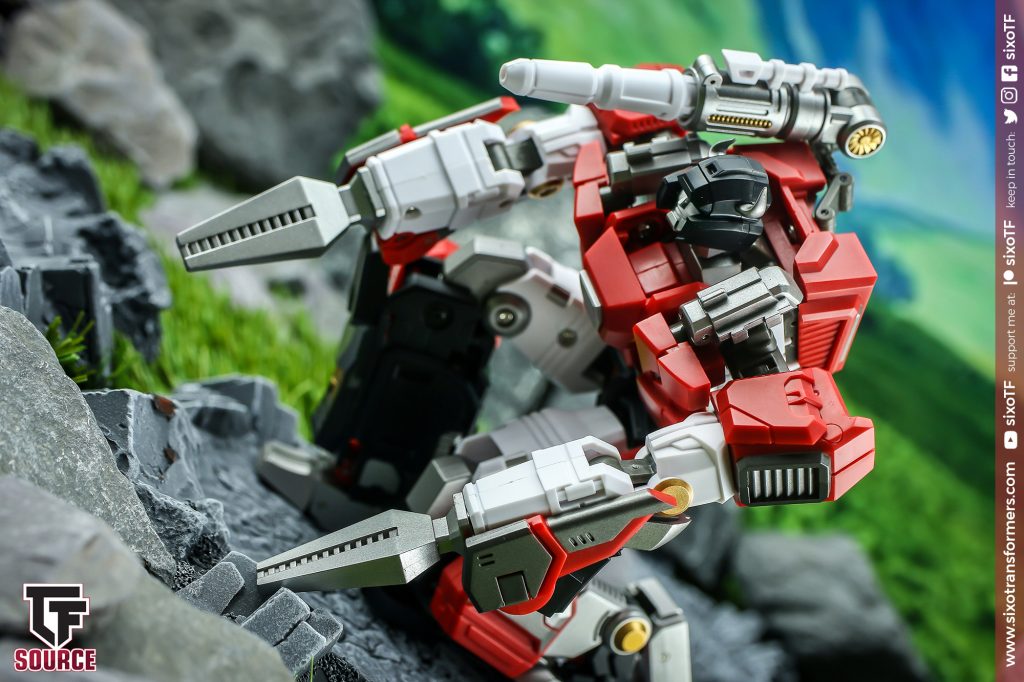 There is even a second set of piledrivers to recreate the varying ways they were depicted in the original Transformers cartoon, an inclusion that feels a little superfluous given the stylistic nature of this release overall, but still it covers all the bases I suppose! 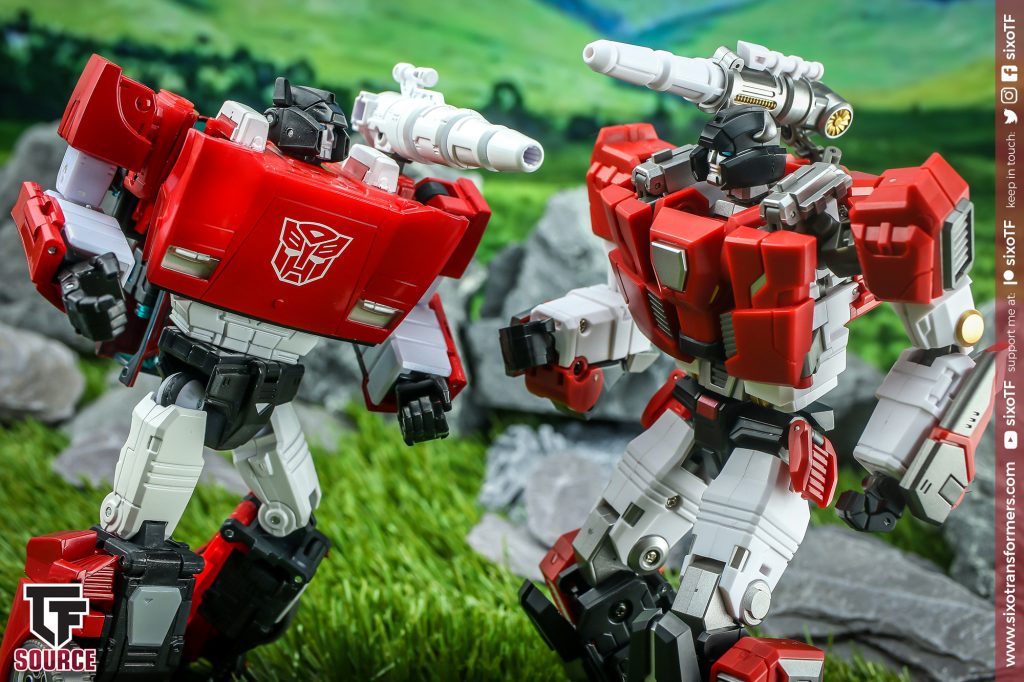 If nothing else, it’s another way that Red Bull edges closer to feeling like a parallel release to MP-12. As a whole he shapes up quite well in comparison, which is saying something considering how favourably-received that official figure is on the whole. Ultimately the biggest variance between the two is the finish, with TakaraTomy’s effort sporting a vibrant coat of paint versus Generation Toy’s bare plastic, but still I do like how they sit alongside one another. 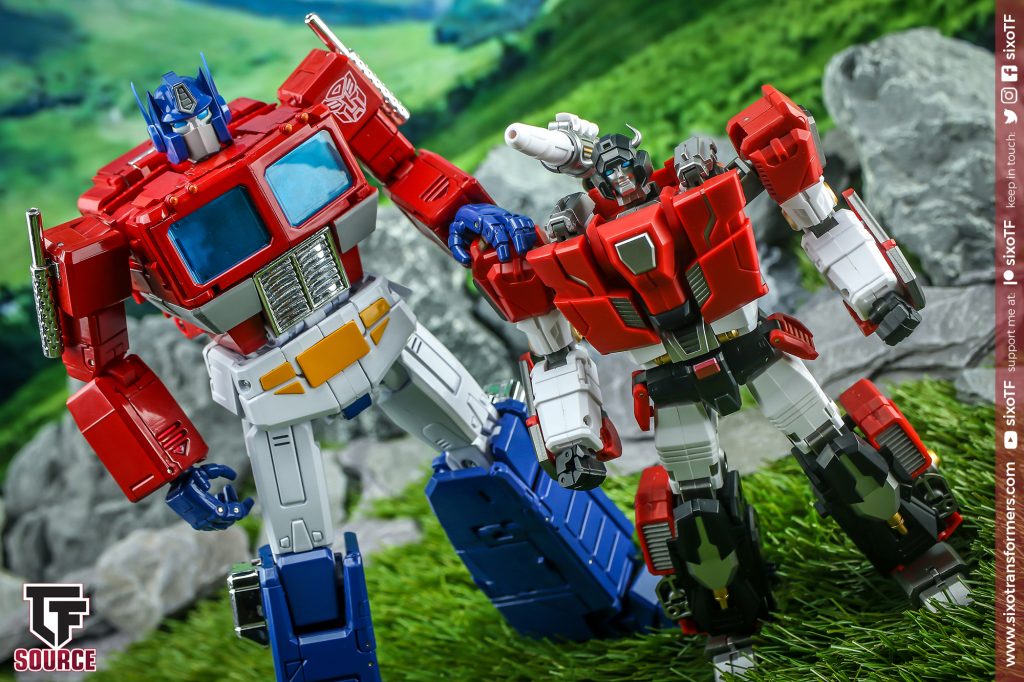 I guess at this point some collectors may be wondering where to house a design like this in their collection then, and perhaps all I can tell you is that he does gel surprisingly well with official Masterpiece designs overall, despite the obvious elements that set him apart. 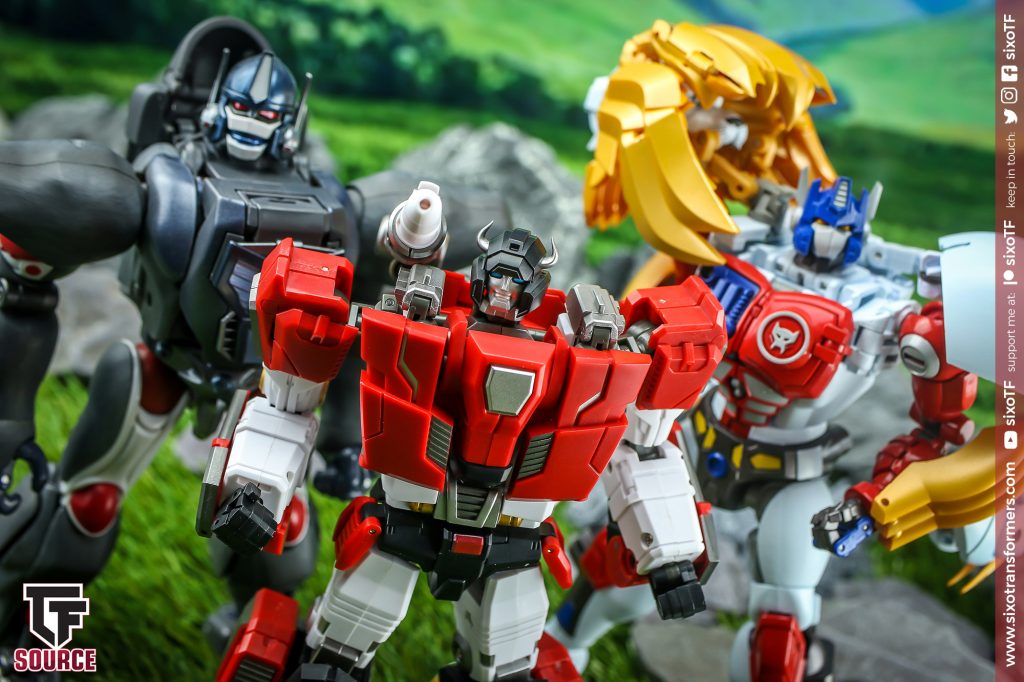 In some ways he is a bit of an oddity, I suppose, but it’s also a shame to think that he might be overlooked on account of people not knowing where to display him. 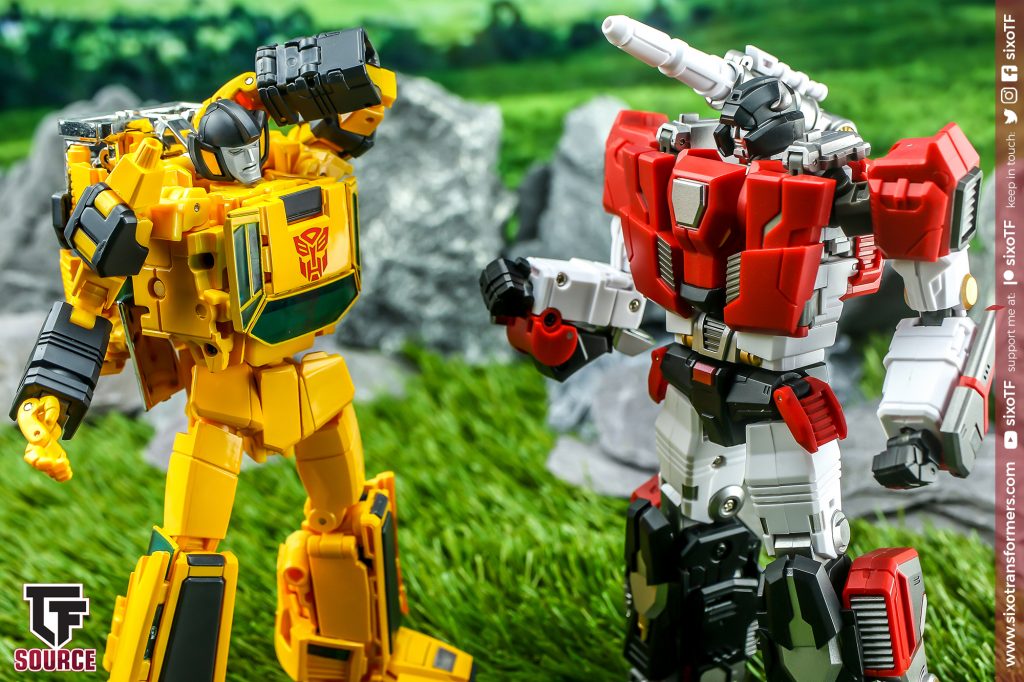 Ultimately the real draw would be in seeing other classic characters recreated in similar T-Beast style, but for now at least Generation Toy have provided a very decent intro to the idea. 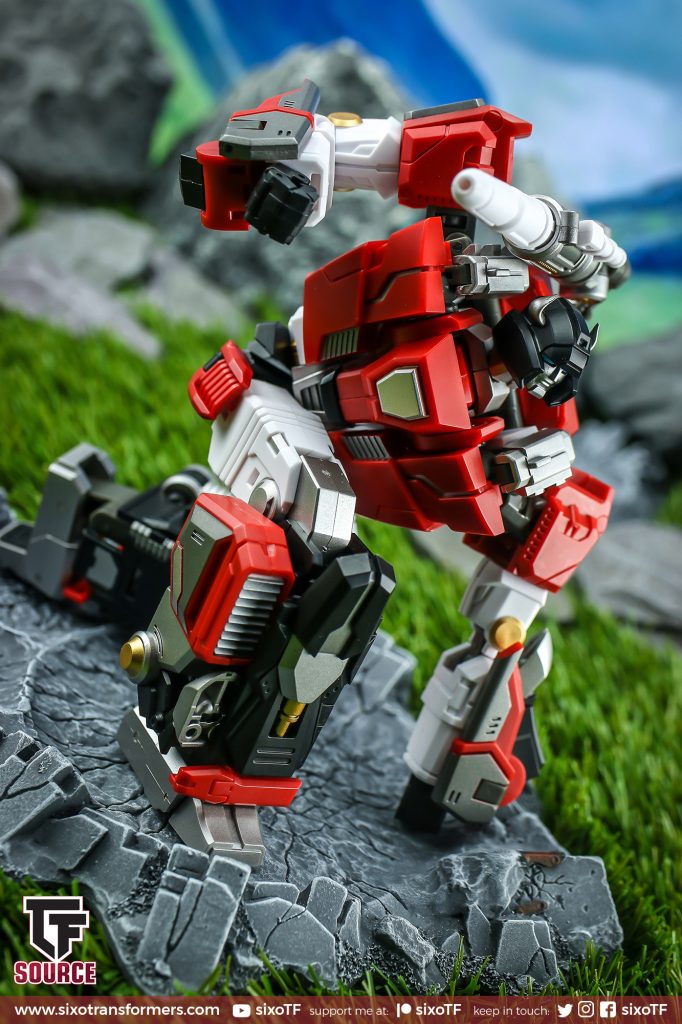 You could say that he is, if nothing else, a bit of a beast.

WHAT’S HOT? The overall design is very good, with a great bull mode and a very handsome and highly-articulated robot form.

WHAT’S NOT? The robot wrists are unforgivably floppy, and the shoulder weapon weapon mount is a bit of an oddity too.