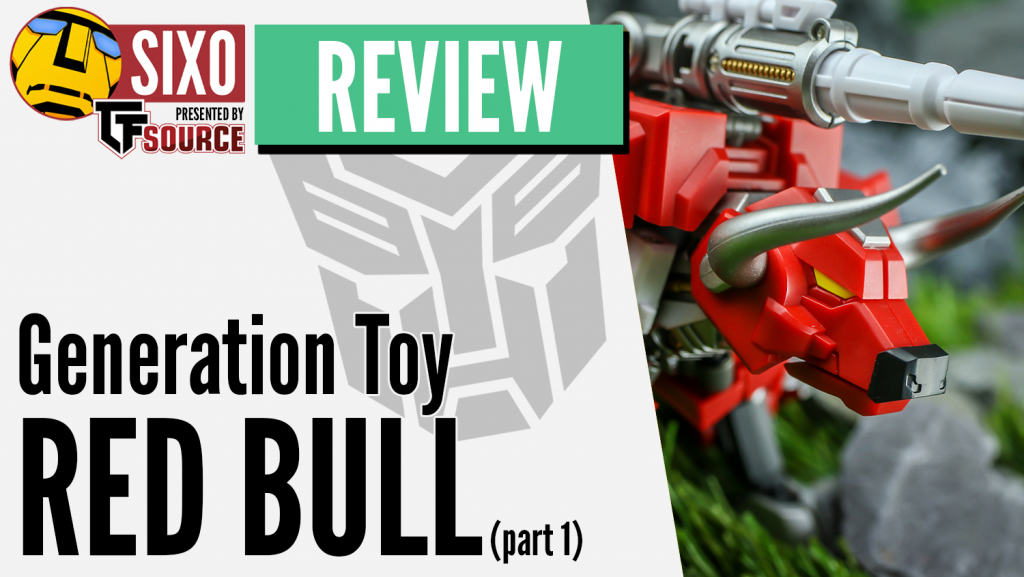 In a world where it often seems like we’re doomed to repeat the same few years of Generation 1 Transformers to ever-increasing levels of slavishness, it’s always nice when things get mixed up a little from time to time. Step forward T-Beast, which is an unofficial book of artwork that reimagines various classic characters in new animalistic form, putting a bit of a fresh spin on an already-familiar set-up. Observe! 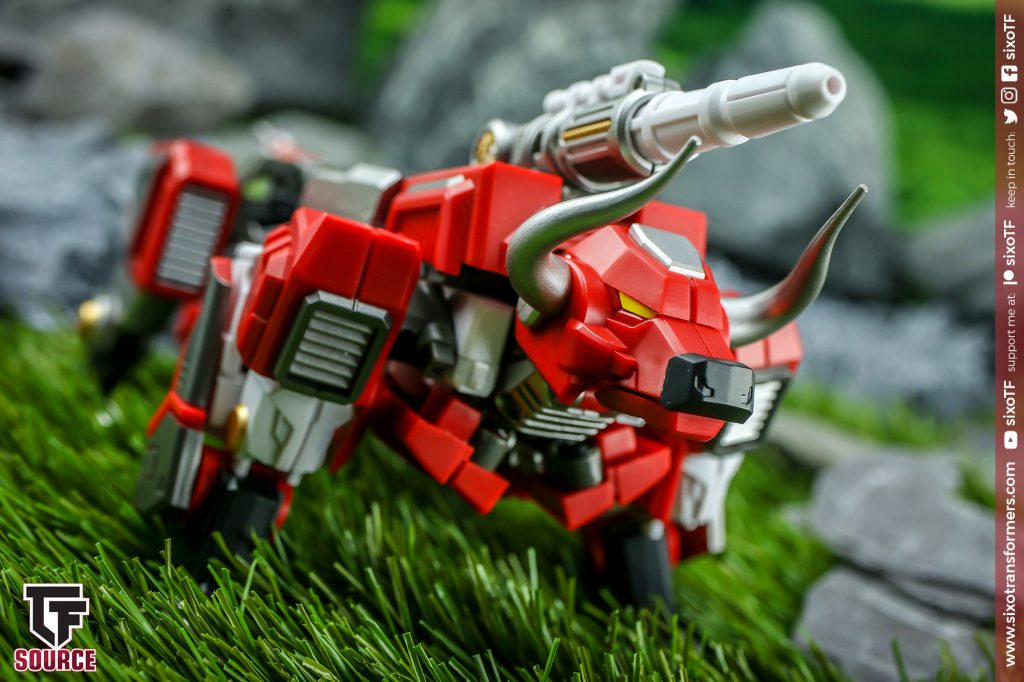 Yep, ol’ Red Bull here isn’t just a random new concept dreamt up by some enterprising toy designer – it’s a homage to that very book, and recreates the concept for Sideswipe in surprisingly faithful detail (you can see some evidence of that in my recent Unboxing video)! 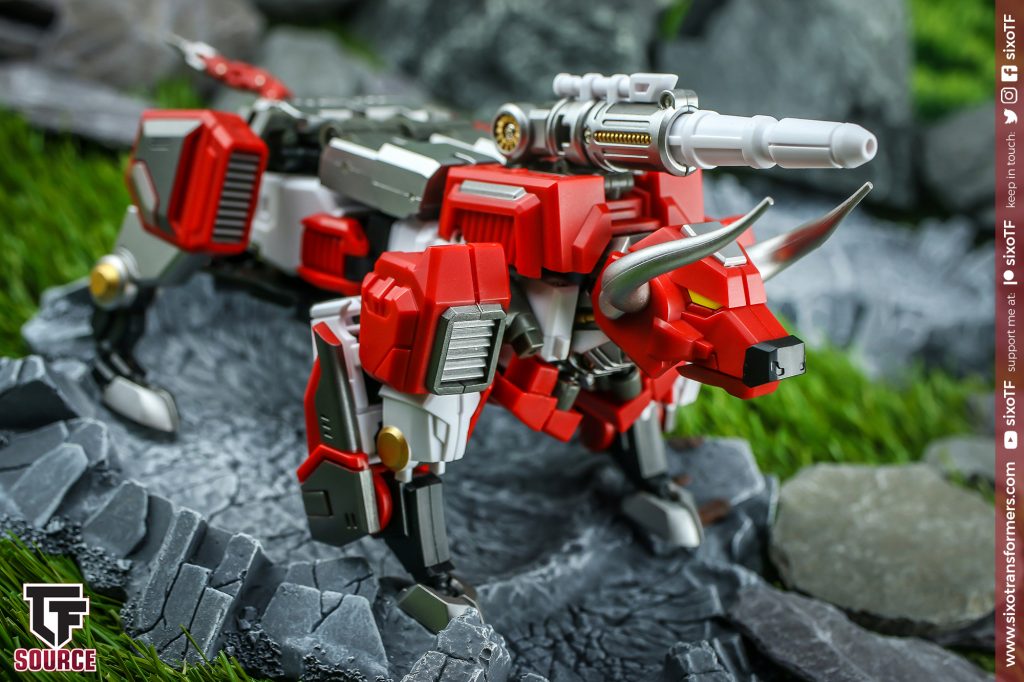 So an unofficial toy based on some unofficial artwork, eh? Well, stranger things have happened, and in fact it’s not the only project in the works right now that takes inspiration from T-Beast, with TT HongLi Red Falcon also tapping from that same vein. However of all the various possibilities contained within its pages, it’s fair to say that Sideswipe is one of the more inspired. 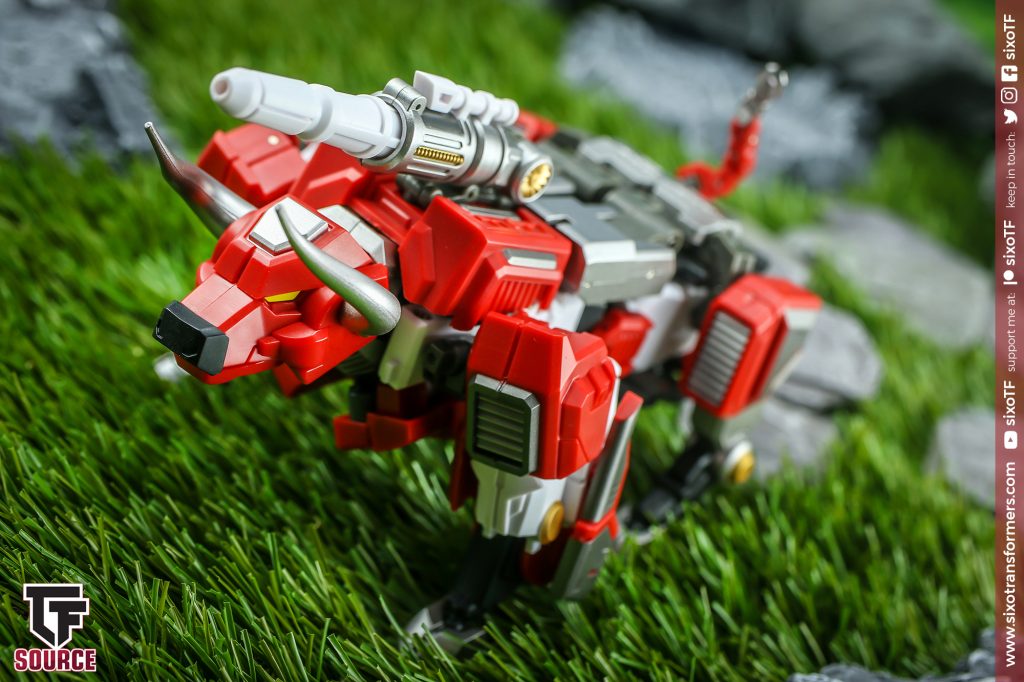 I mean come on, his beast mode being a bull is not only a fairly fitting overhaul for the brash nature of the character, but it’s also a rather clever nod to the emblem of his more-typical Lamborghini alternate form. That last fact alone somehow elevates the very concept of Red Bull to new heights, by my estimation, as I can almost imagine this idea achieving a broader appeal beyond just “classic robots now turn into animals”, but maybe I’m overthinking it somehow. 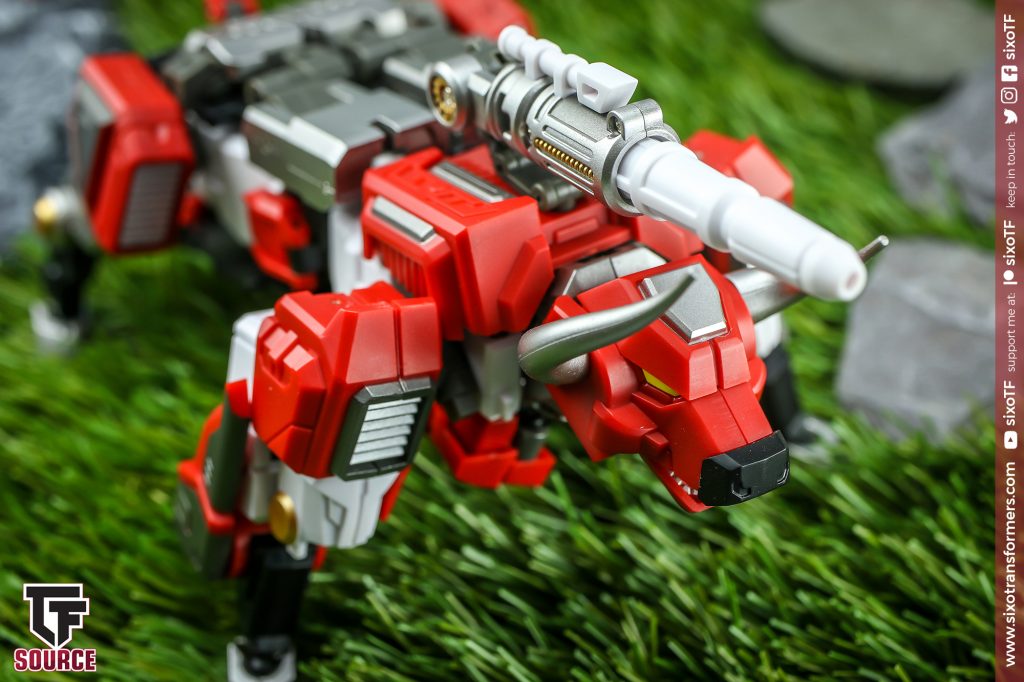 In any case, this thing now exists, and fortunately it’s not nearly as silly as perhaps it could so easily have been in the wrong hands. In fact if you’re bought into the idea of Sideswipe being represented in bovine form then I doubt you’ll be disappointed on first inspection. 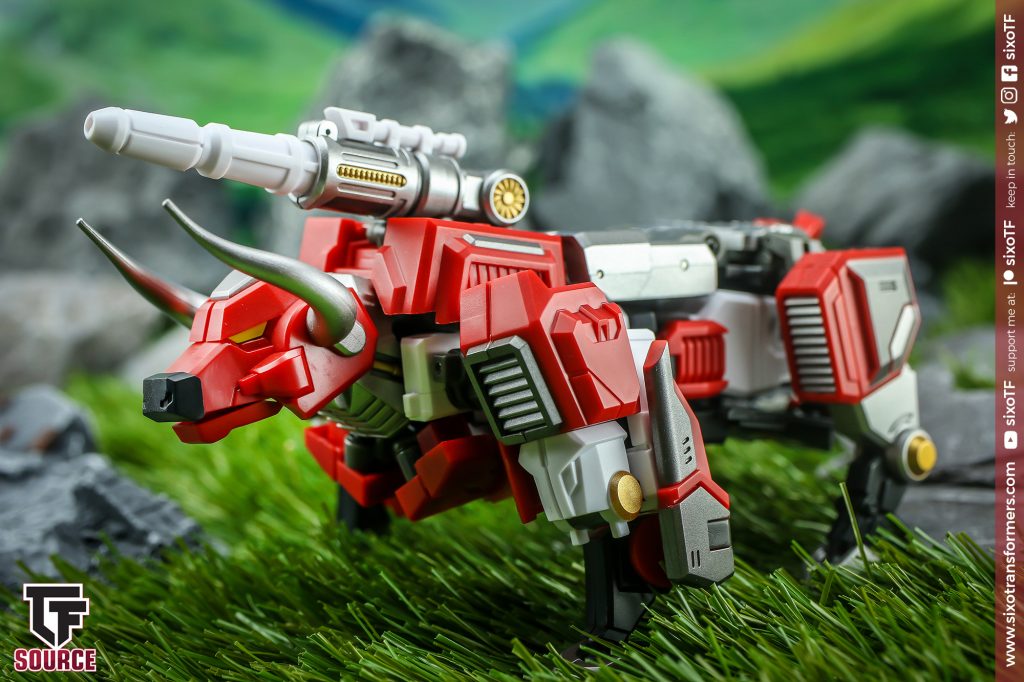 First up, he feels suitably solid and well-made, with a solid plastic on offer and everything presenting on-point. The red has a welcome pop to it and despite only being bare plastic still manages to look good (where so many unpainted reds can often look a little cheap, somehow). 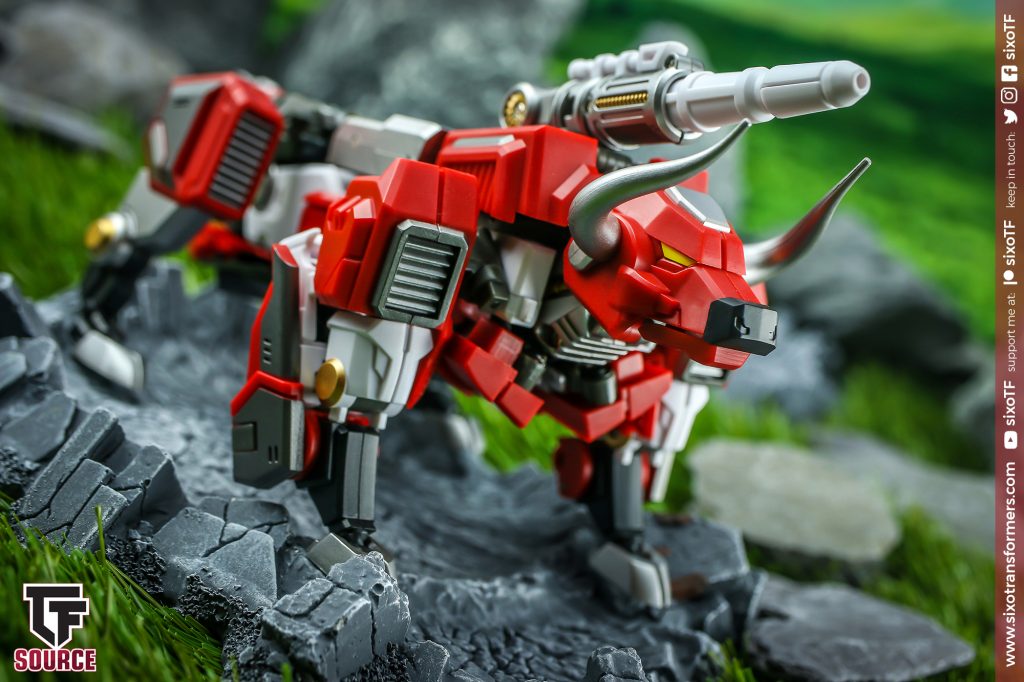 He’s decked out with a fair dose of attractive paint applications too, including a lot of silver and gold trim with looks very sparkly. Overall there’s a nice finish going on, and especially in areas such as the prominent gun on his back. 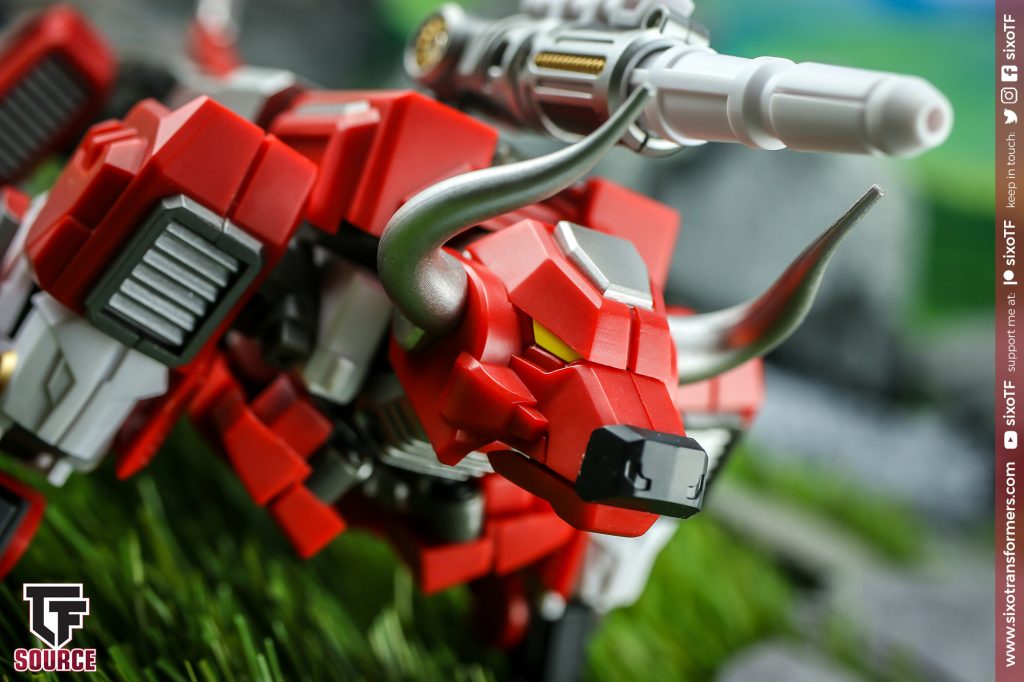 Of course what looks really spectacular here is the head sculpt. It’s pretty much perfect for what it needs to be, and captures the very idea of a mechanical raging bull to a tee. I really like the choice of yellow eyes and the horns have a pleasing curvature to them too. It’s perhaps a bit of a shame he doesn’t have a ring through his nose, but that’s at least wholly accurate to the artistic source. 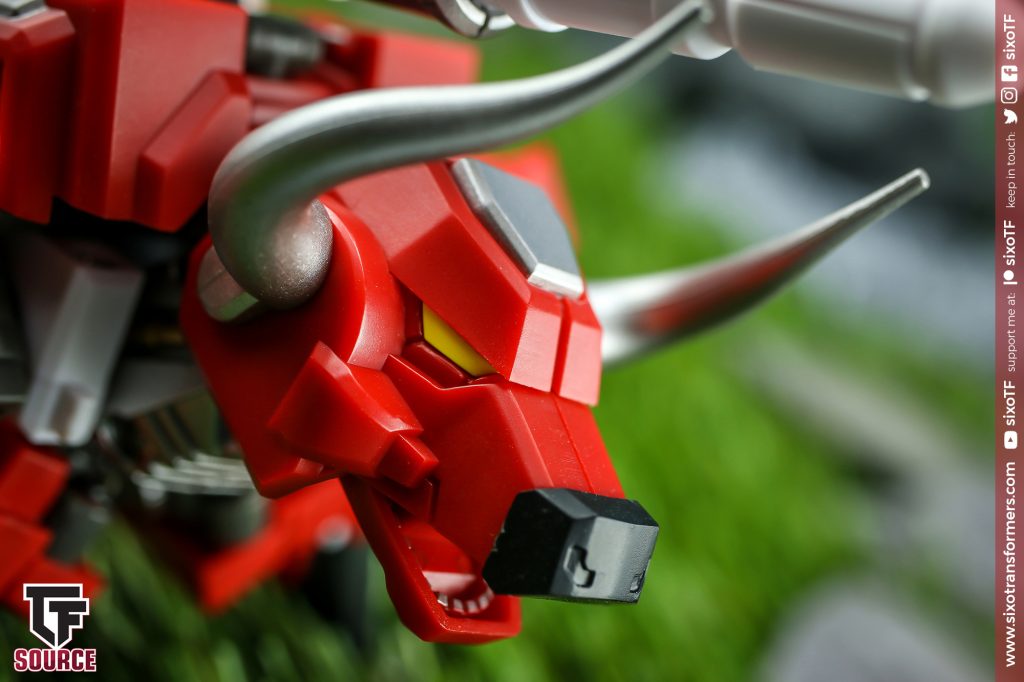 Oh, and you can also open the mouth a little should you wish, revealing a small but fairly detailed set of painted teeth within. Nice touch. 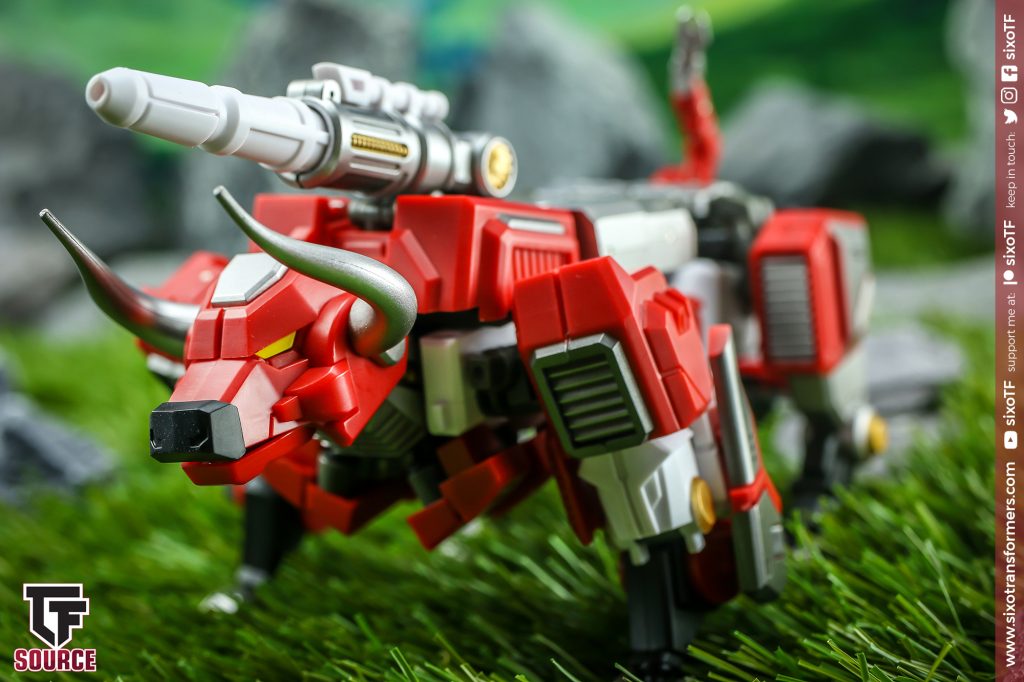 In terms of other details, let’s talk about that main cannon, shall we? It looks really good in terms of how its finished but also adds a little extra play value to the proceedings overall. 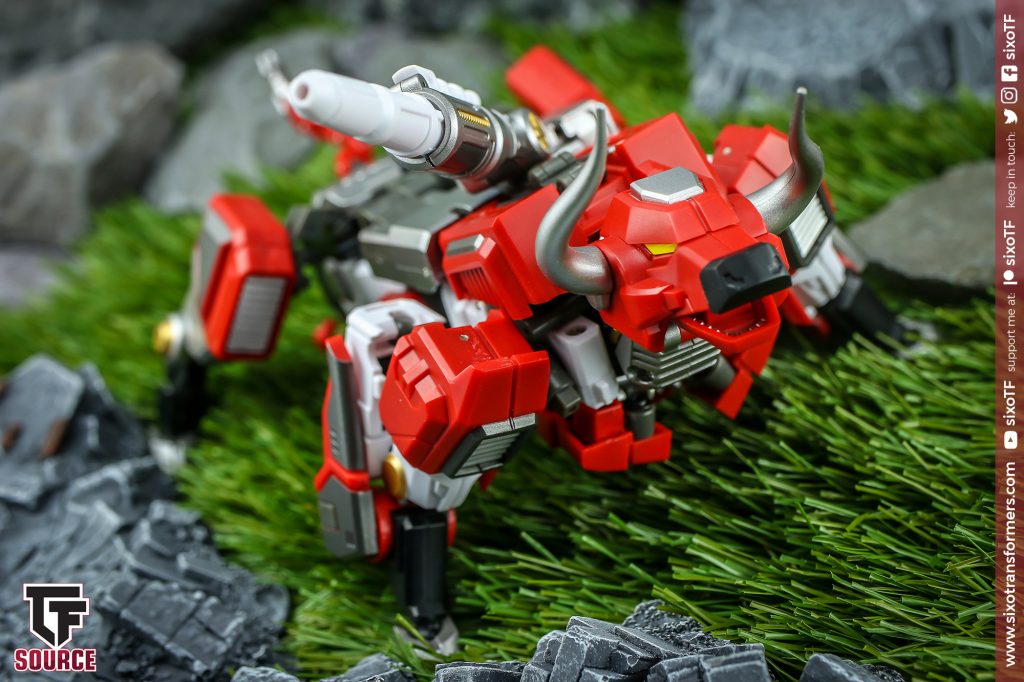 That’s mainly due to the highly articulated arm that the cannon is positioned on, giving you a large range of motion even though it does have a default pegged-in position facing forwards. I will say that it appears a little silly when being moved around because the bull neck doesn’t allow enough range of motion for him to be looking in the same direction, but it’s not a major problem. 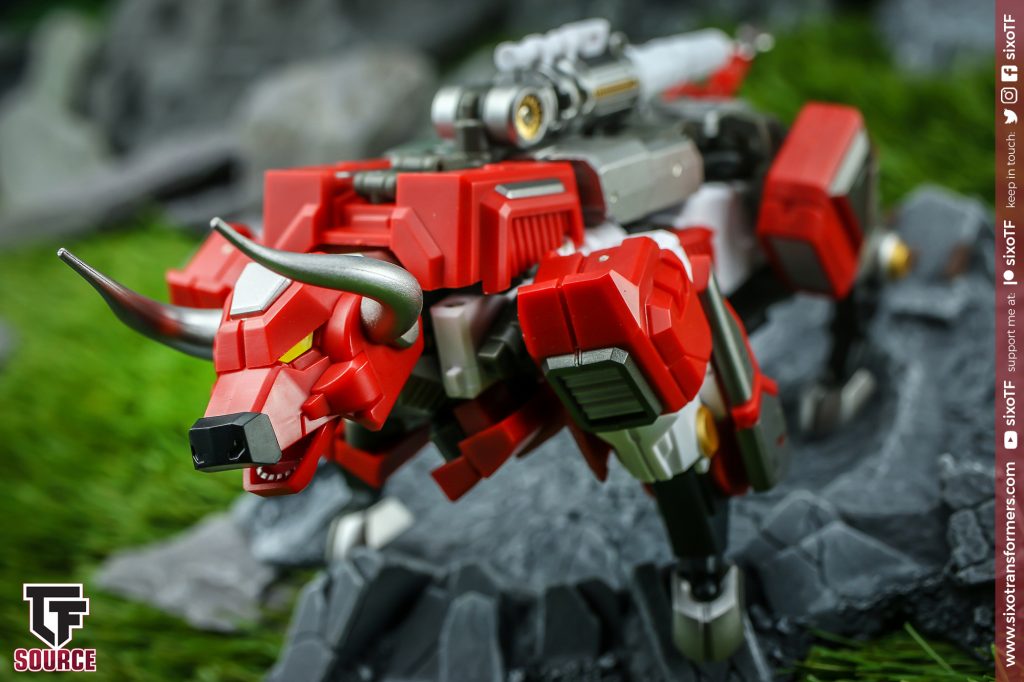 Alternatively, should you prefer it a little more out of the way then you can flip it round into reverse. I’d just recommend being a little careful with the arm itself, as it’s not the thickest piece of plastic I’ve ever seen and does require a fair bit of manipulation. I haven’t had any issues on my copy at all, but it never hurts to be cautious! 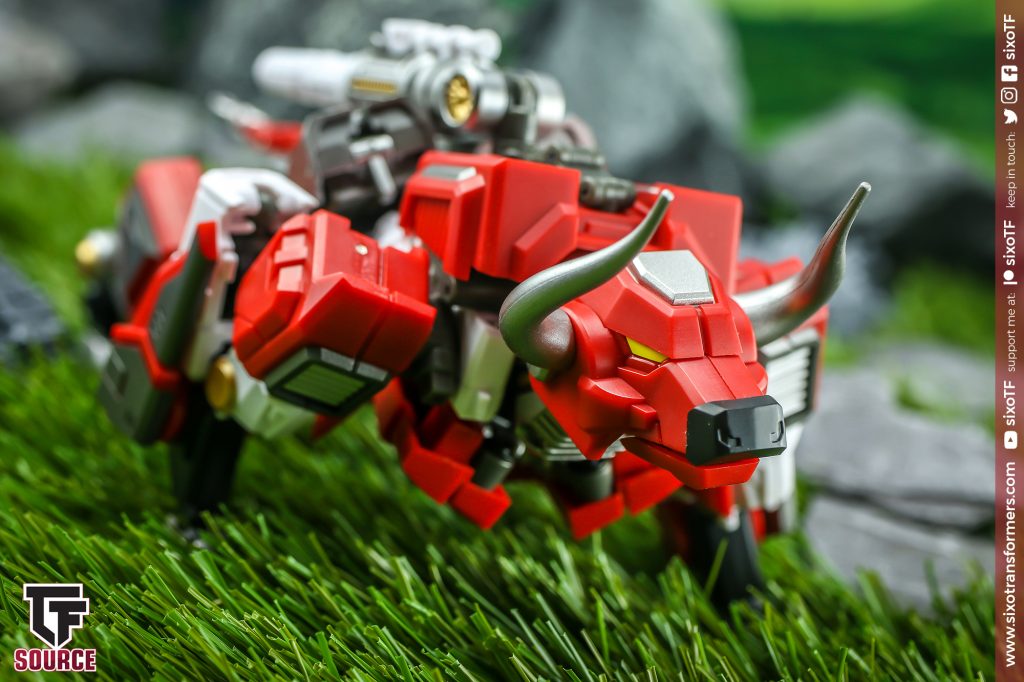 As for articulation elsewhere, there’s a fairly decent amount of movement that can be achieved from the bull form as a whole, although perhaps not quite as much as I might have liked. 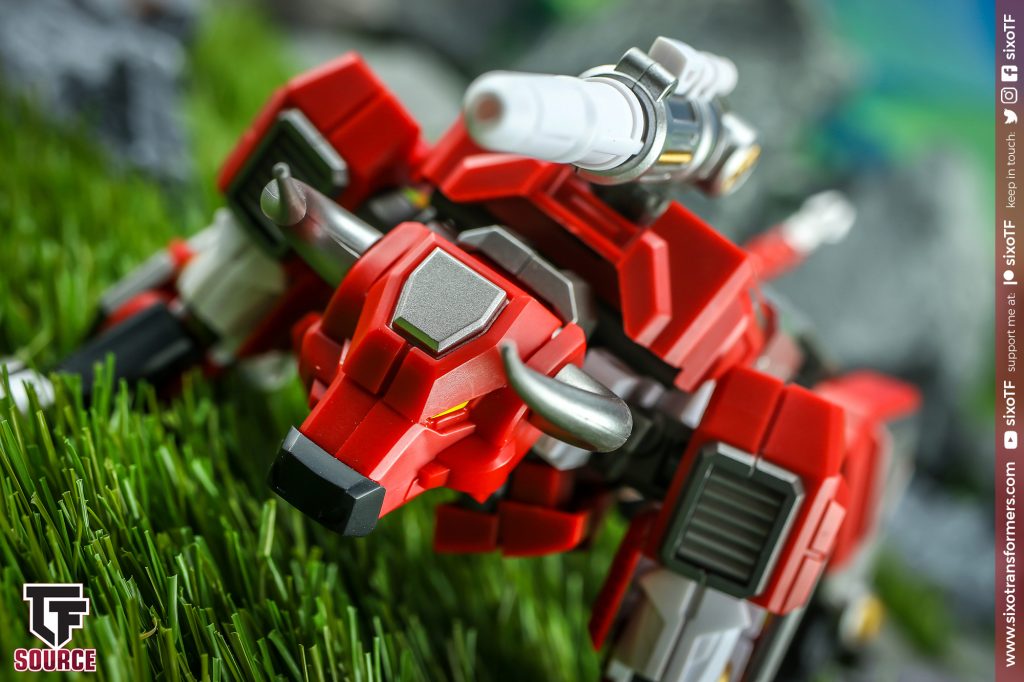 As already hinted, a lot of that starts with the bull head itself. It can look up and down (in a very bullish motion!) well enough, but the head can’t really tilt or sway from side-to-side with any particular range, which means Red Bull is essentially relegated to looking forwards for the most part. 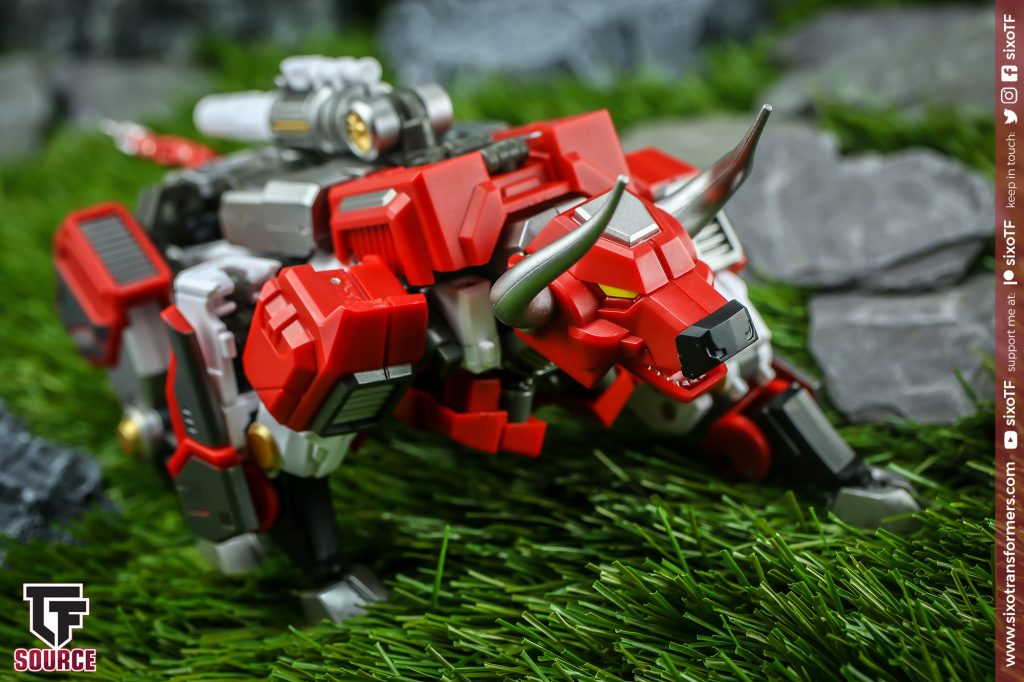 Past that, the legs articulate probably about as you’d expect in terms of the main joints, although I do wish that the front set could angle out a little more. That said, I do like how the bull mode even accounts for a bit of ankle tilt, something that definitely accommodates a little more fluidity when it comes to posing. 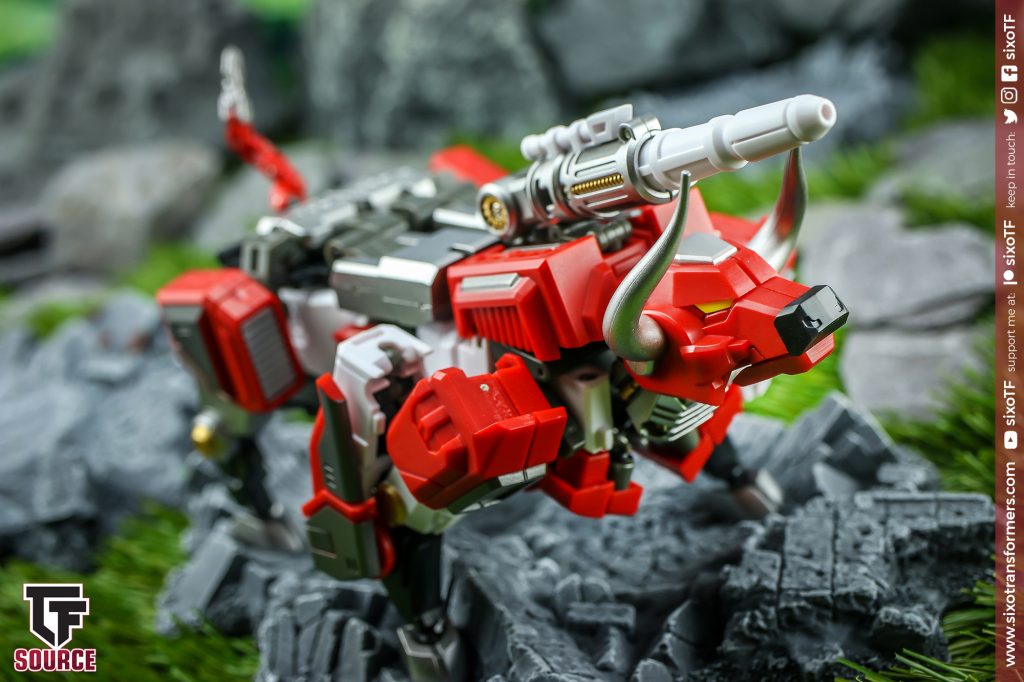 And of course there’s that multi-jointed tail, which may only be a tiny detail but still brings a surprising amount to the fore in terms of how this guy presents. 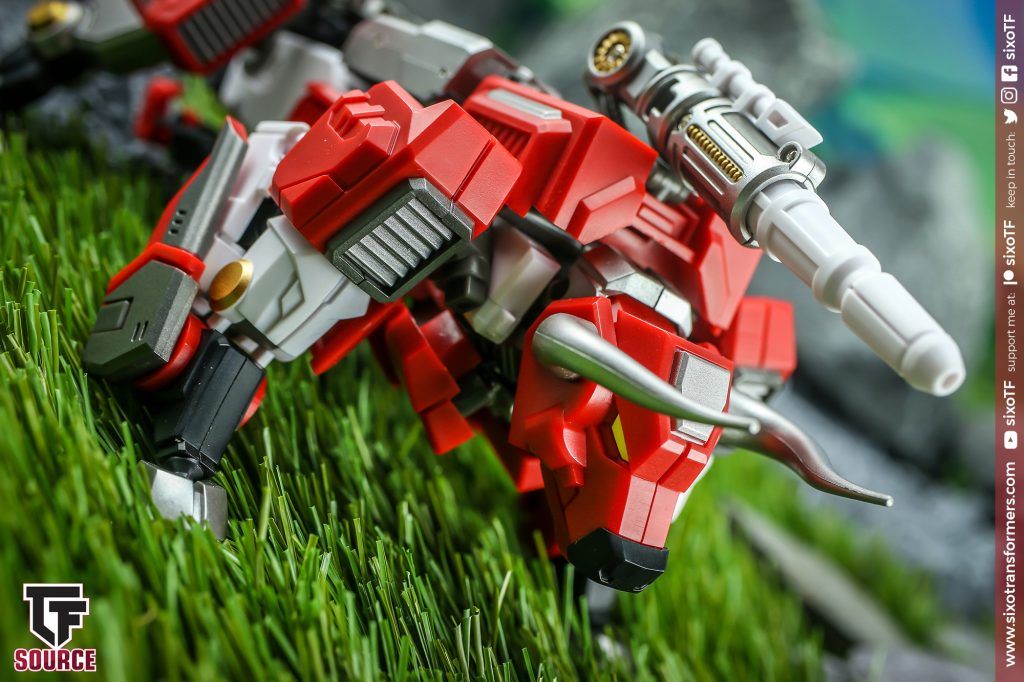 Ultimately it’s a strong mode on the whole and certainly provides a decent dose of amusement when posing him. It’s a very defined and characterful sculpt, which makes it hard to display without looking at least a little dynamic. 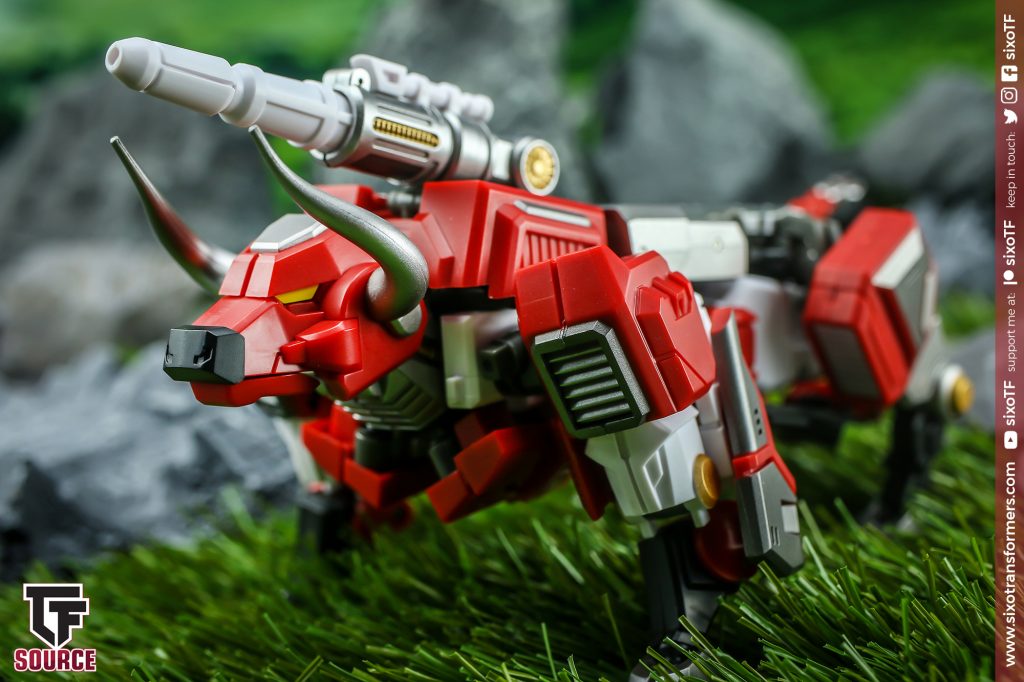 Besides, there’s a degree to which the bull mode is just such a fun and vibrant thing that it almost transcends any minor nitpicks I might be able to throw at it. I’m just so impressed to see Generation Toy going all-in on a design like this, the results of which sort of speak for themselves. 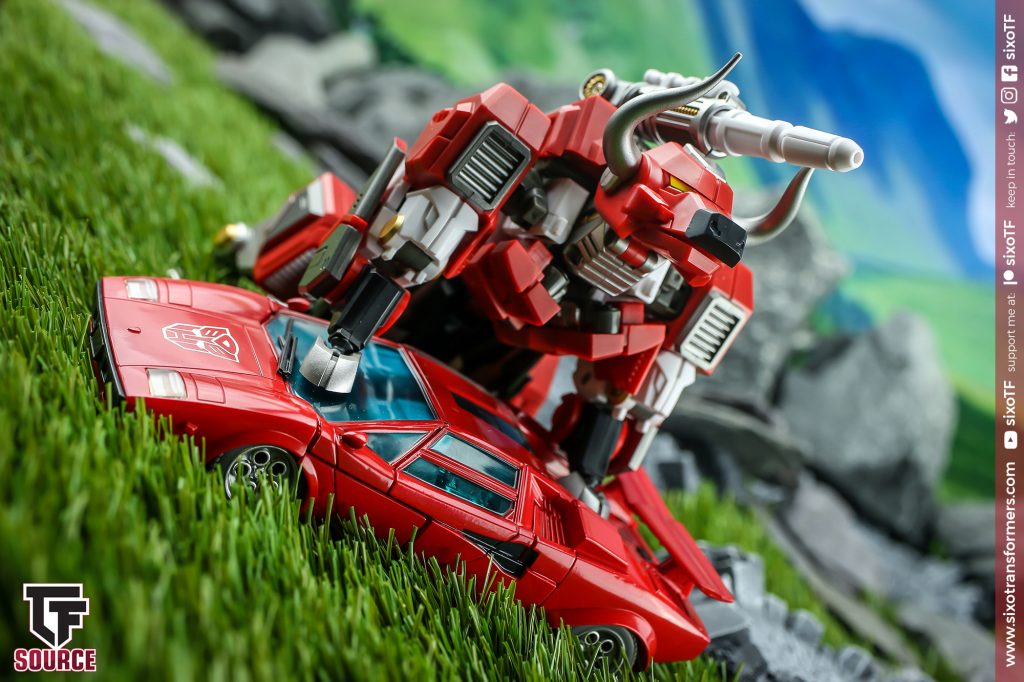 It’s just a very different take on a well-known character, which as I say, isn’t necessarily something that’s in great abundance right now. For what it’s worth, I actually think that he and MP-12 Lambor make a fantastic accompaniment for one another, and I can almost see some enthusiastic Lamborghini fans finding a fitting display in simply pairing these two up on a shelf together. 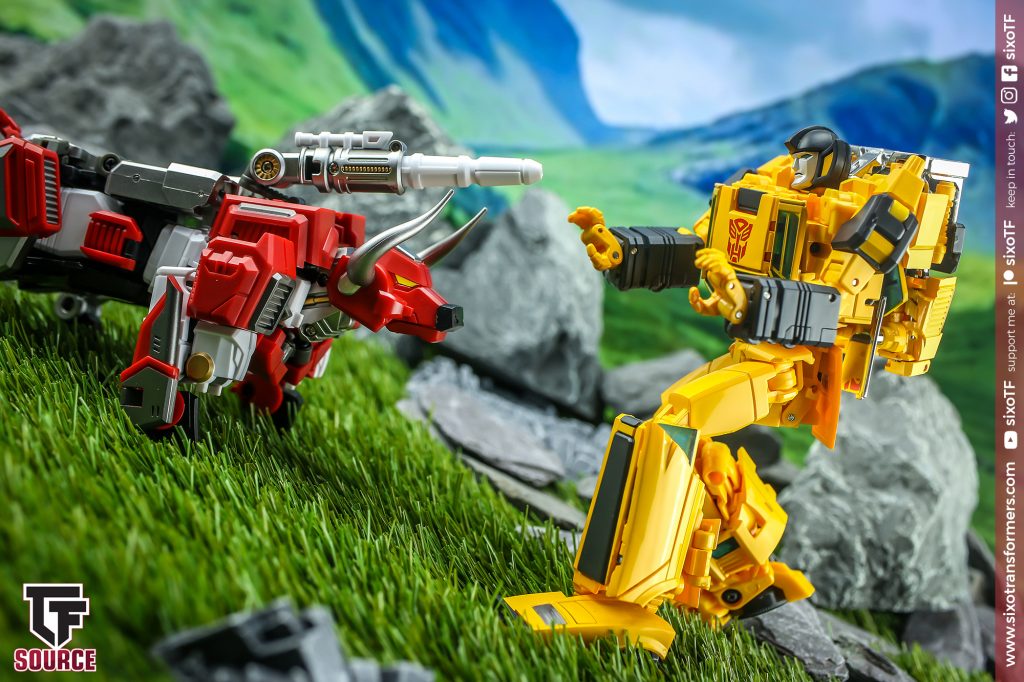 However Red Bull is also a lot of fun to observe versus any number of other Masterpiece-styled toys – or, I imagine, whatever part of your collection you might like to line him up with. I’d love to see a fitting take on Sunstreaker done in this style too, but even with MP-39 there’s quite a lot of comedy to be had! 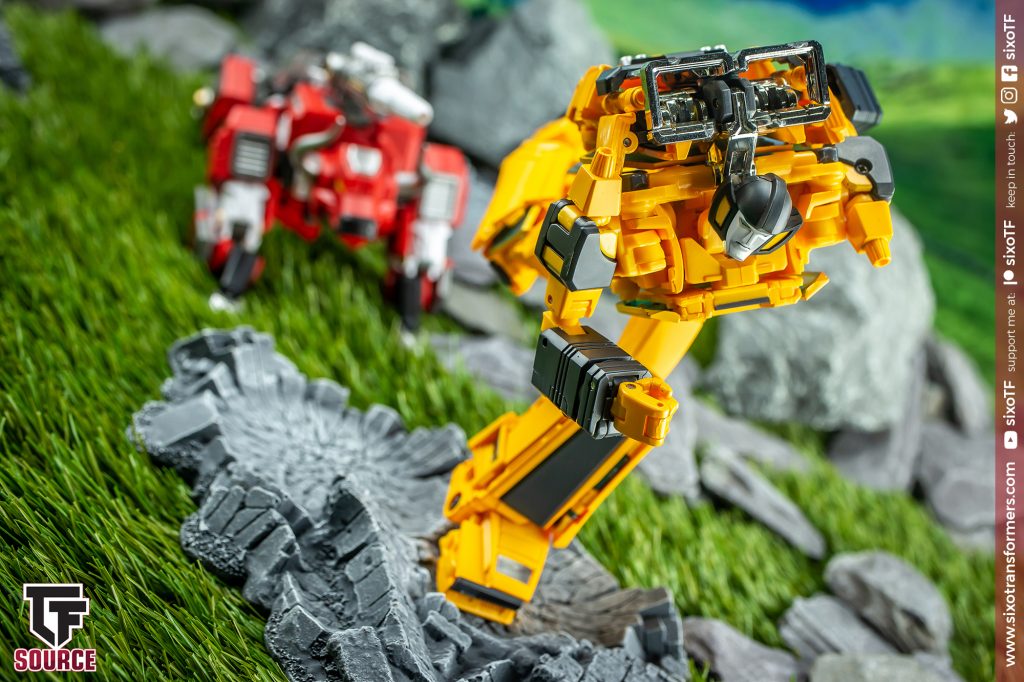 The fact that he is essentially Masterpiece-scaled (especially as the robot mode lines up in height with MP-12) makes this all the more bizarre to see! 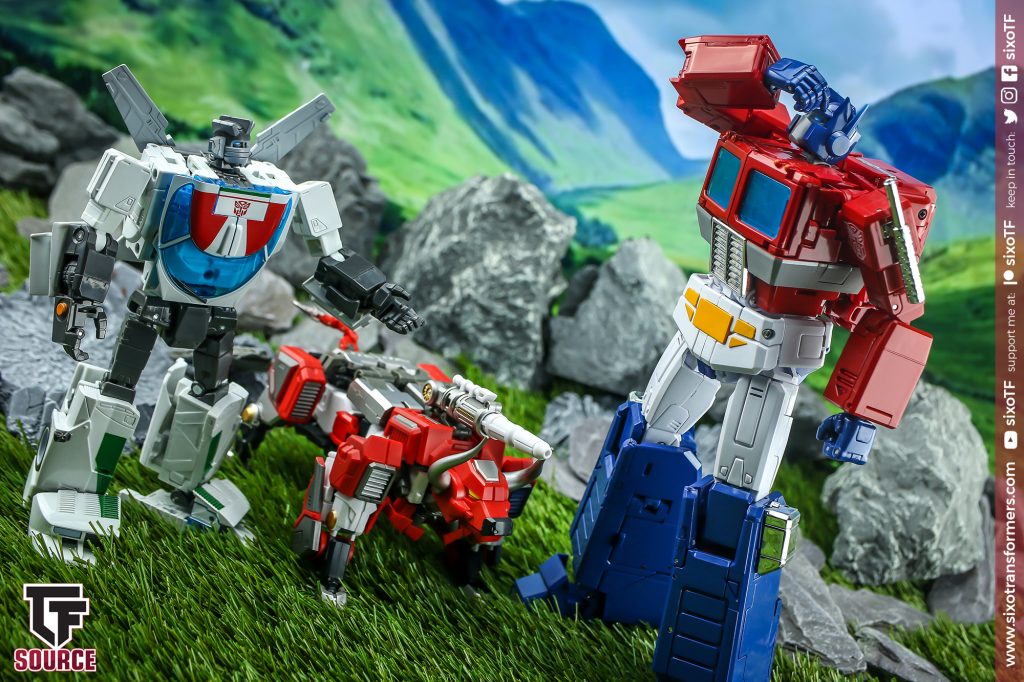 Will Generation Toy follow through and do similar T-Beast-style makeovers of other members of the Autobot crew? Time will tell I suppose, but they have indeed hinted at a couple of designs from the book, and if they’re as creative as this then it would certainly be an interesting endeavour. 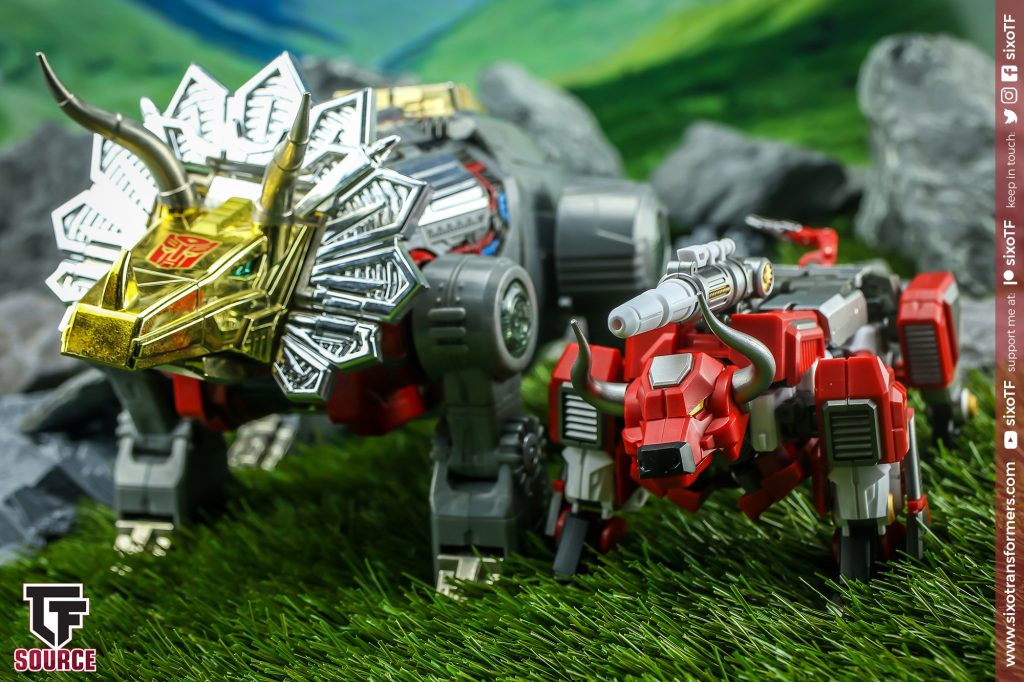 It’s maybe hard to know exactly where something like this belongs in my collection as it stands, but all I know is that if you worry too much about stuff like that then sometimes you end up missing out on some really enjoyable projects. I would say this falls into that category. 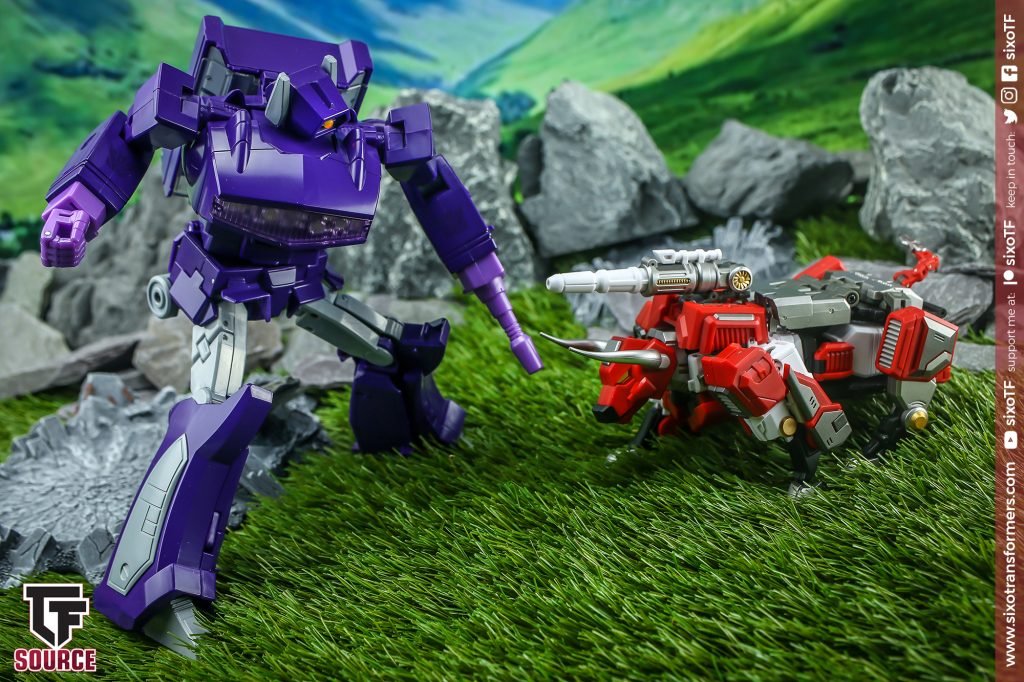 After all, you don’t want to be too logical about it, right? 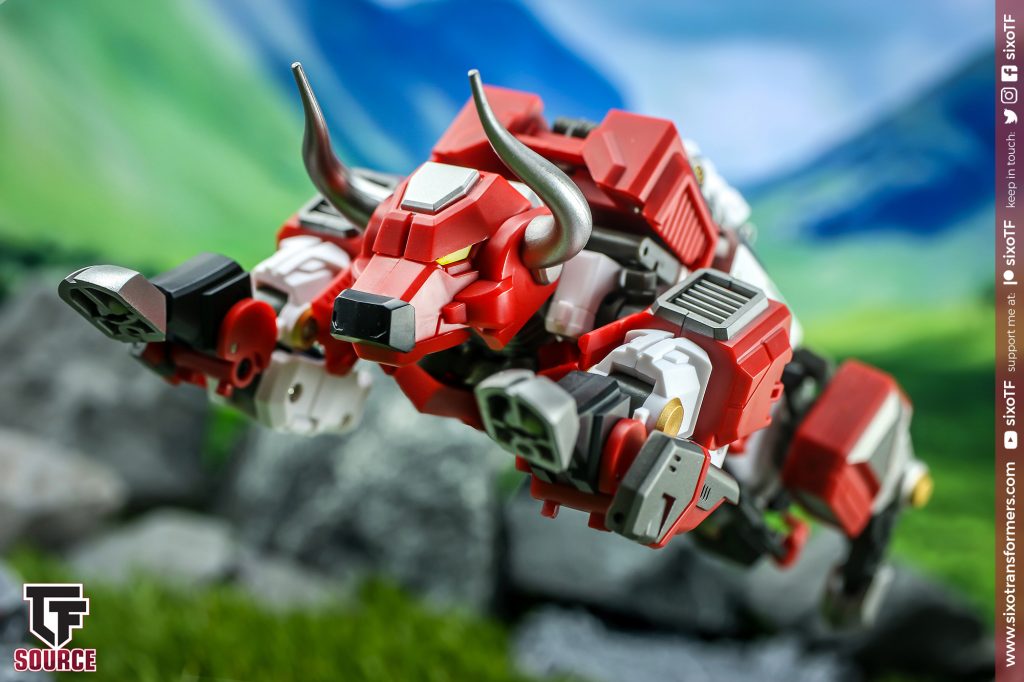 So, that’s bull mode done, and I managed it without making one single joke about him giving you wings! Join us next time when we’ll be getting him transformed up and checking out that robot mode!