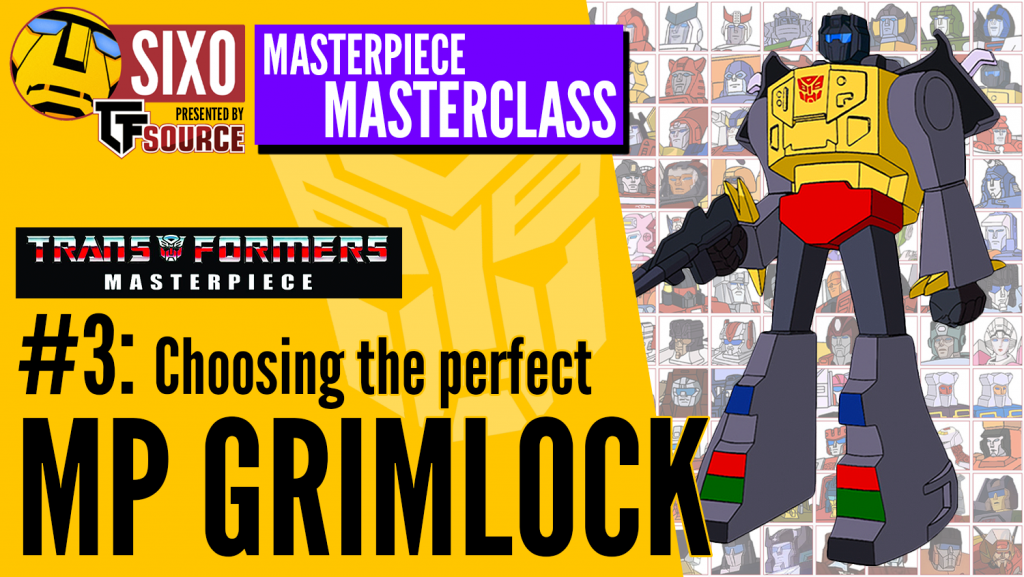 Welcome to the third part of our ongoing Masterpiece Masterclass series, where the aim is to take you on the perilous journey of assembling a perfect Masterpiece Transformers collection by looking at all of the various options available for each character, both official and non.

Ultimately this is a personal project, and by no means do I claim to speak definitively in terms of the right choice for every collector out there. However, I do hope that by documenting the decisions I’ve made for my own collection, it might prove useful for Transformers fans who are either starting out or are maybe not sure about which options to choose in a particular case.

Although there are many different potential line-ups to be had in Masterpiece form, we’re going to keep it as simple as possible and focus on honing a decent-looking G1 cartoon line-up to begin with! With that in mind I’ve put together a list of every named character who appeared in the Sunbow animation during the 4 seasons of its run (including The Rebirth). We’re going to start with the Autobots (with the Decepticons soon to follow), so here’s what we’re looking to achieve… 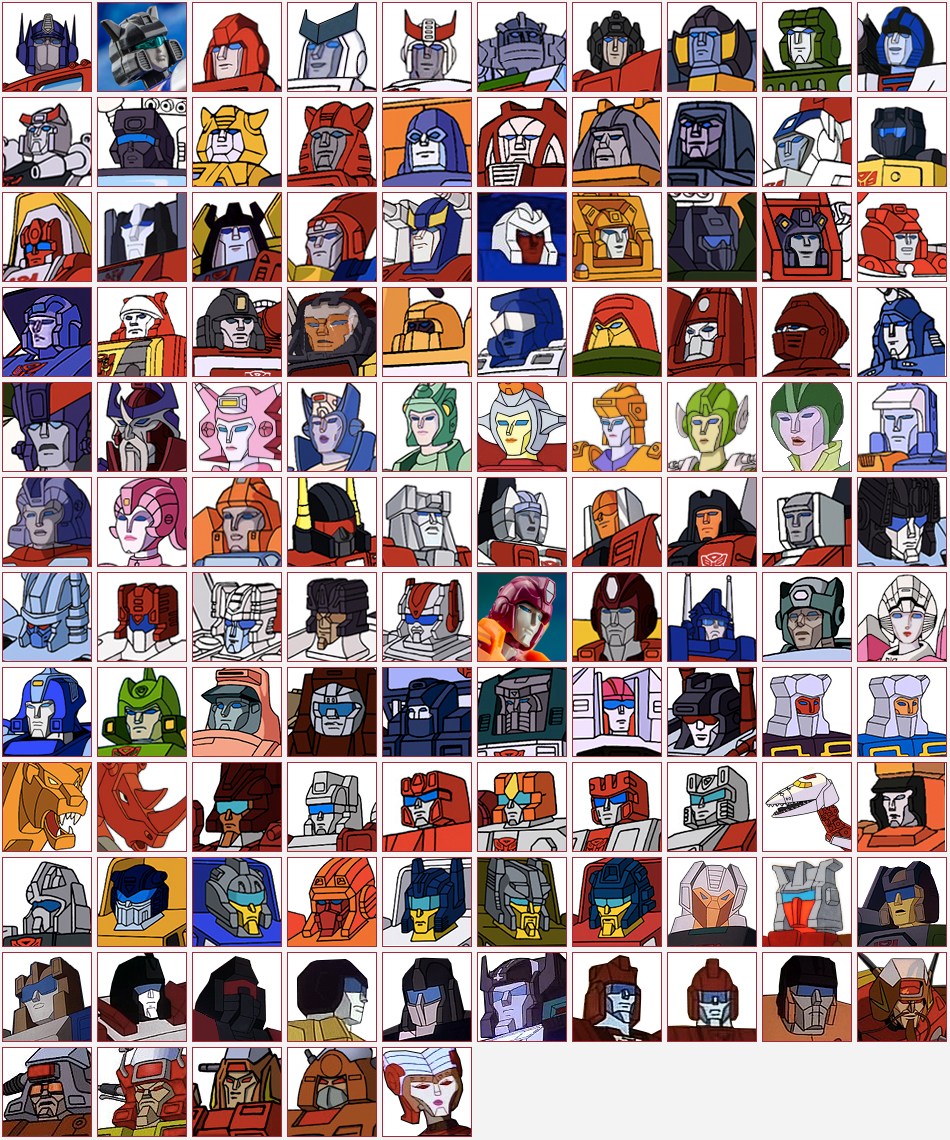 That’s still a lot of characters, but we’re already underway, having added Maketoys Downbeat and MP-28 Hot Rod to the roster in the series so far!

When I’ve confirmed which toy is taking the spot in my collection, I’ll also assign it a current status:

So, all that said, today we’re going to be taking a look at the third character on our roster and it’s none other than… GRIMLOCK! 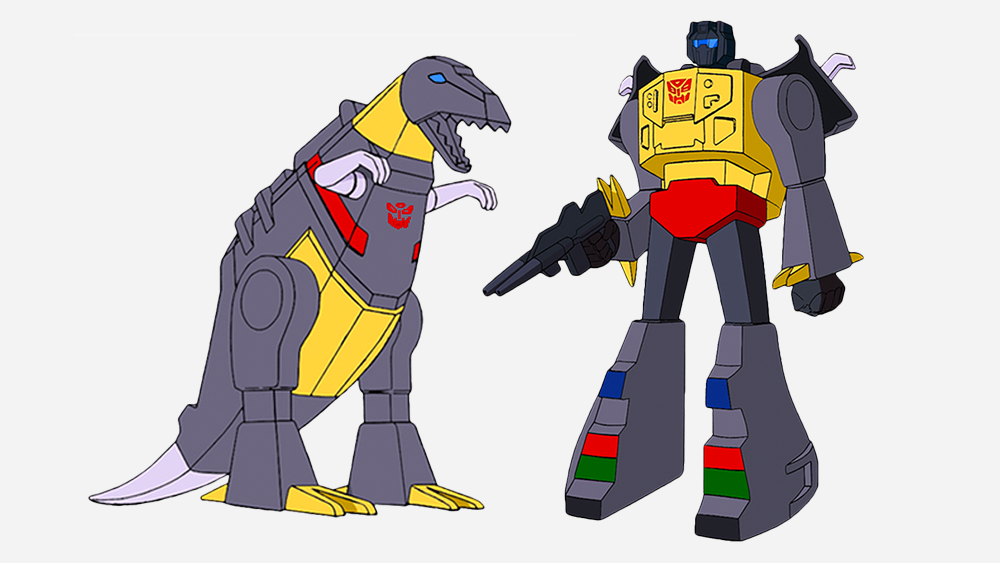 First, let’s go ahead and look at the options available, shall we? 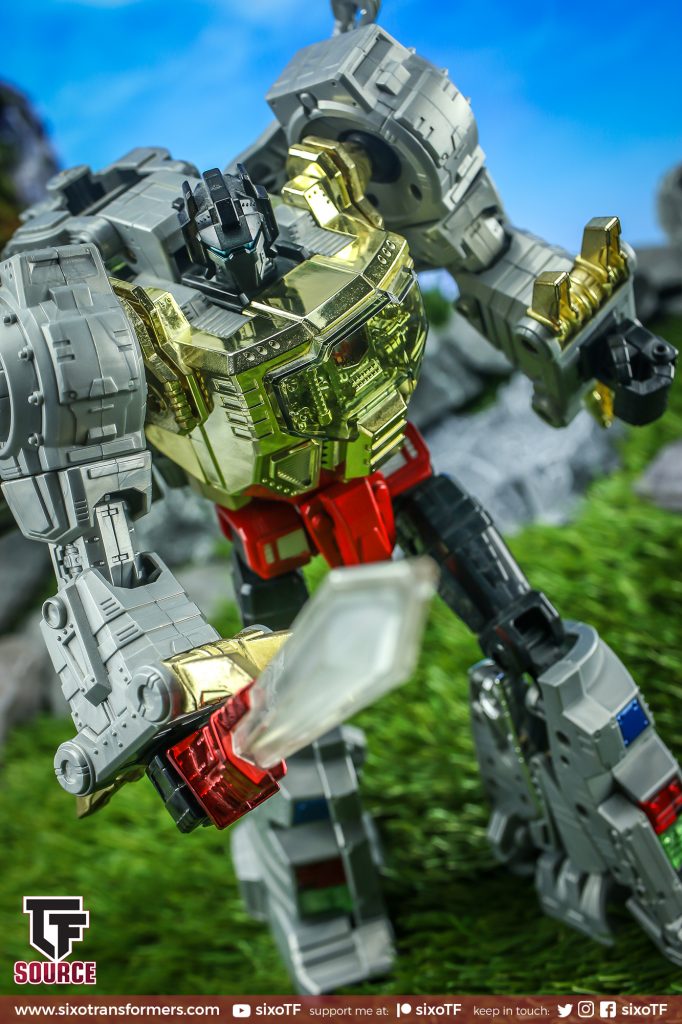 Of course there has already been an official Grimlock toy released in the Masterpiece line, first by Takara in 2009. It subsequently saw release under Hasbro in 2010 and again in 2014 (albeit with less accessories, but with the crown from the MP-8X release below), and is well-known for being a fun and nicely-designed toy with plenty of gimmicks involved. It features a sword which connects to a light-up feature built into the right hand and blaster, and originally also included a cranial device similar to the one the character uses in the episode Grimlock’s New Brain as well a drinks tray and apron as a homage to the episode Madman’s Paradise. As if that wasn’t enough, the toy has eye colour-changing features in both modes, as well as an inherent gimmick which allows you to move the head in dino’ mode.

One thing to note about this toy is that it does not fit the same scale subsequently established by MP-9 and MP-10. 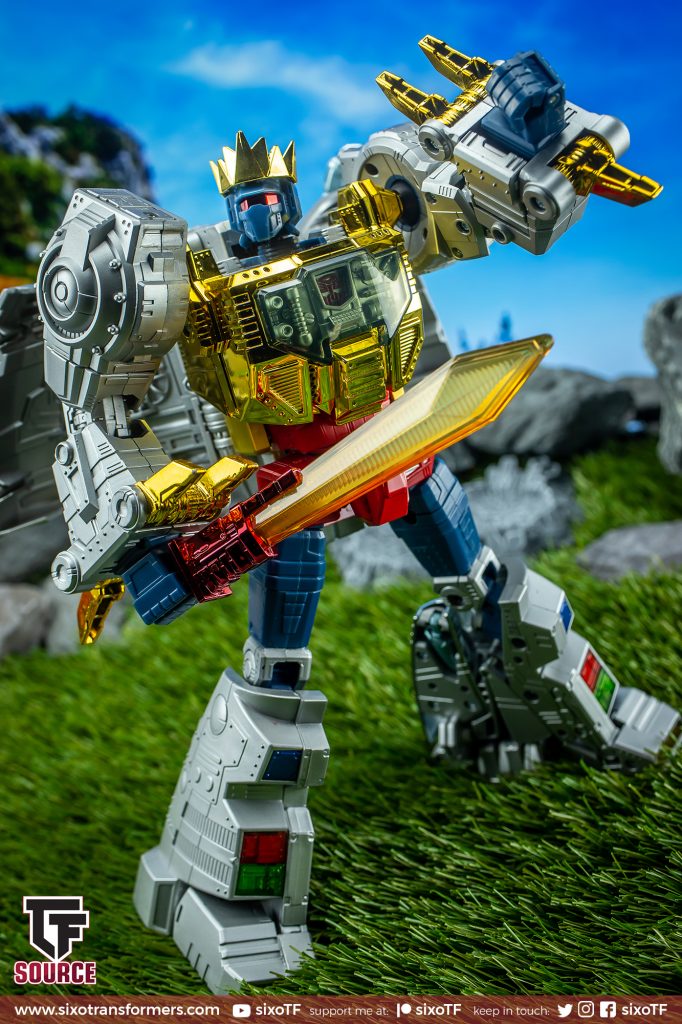 Also released in 2009, this version of Grimlock is identical in terms of moulding and design to the main Masterpiece release but features a new Marvel Comics-inspired paint scheme, with silver for the main body and a light blue for the head and thighs. It also drops the cartoon-related accessories from the first release but instead features a crown as a nod to the printed storyline.

As a side note, both official releases were subsequently made over as hugely-oversized KOs (although the more standard cartoon version still had silver paint). 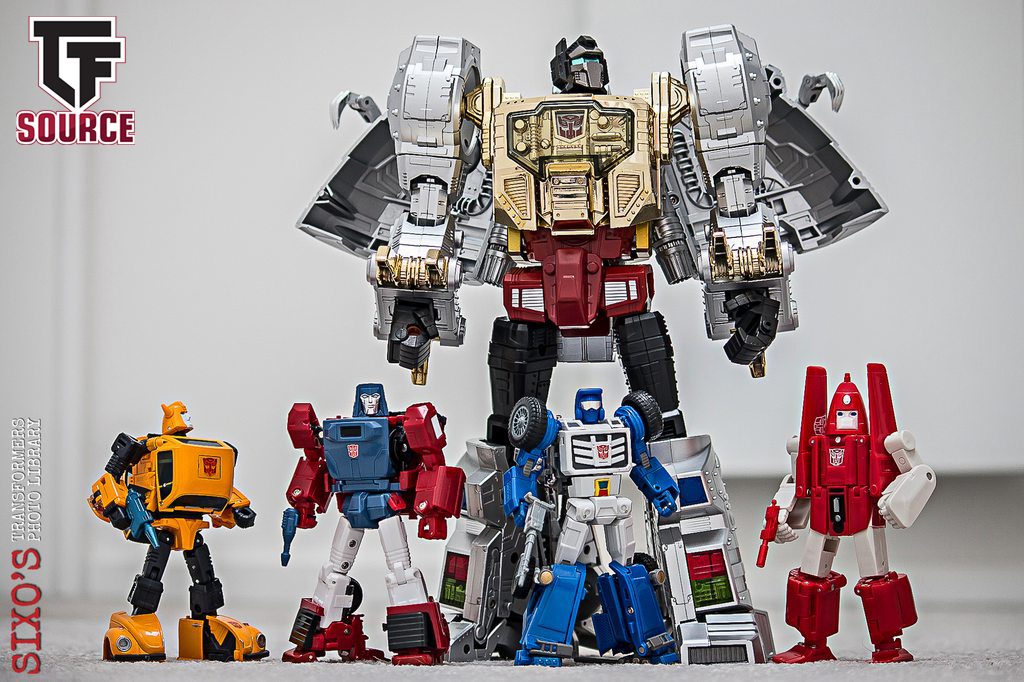 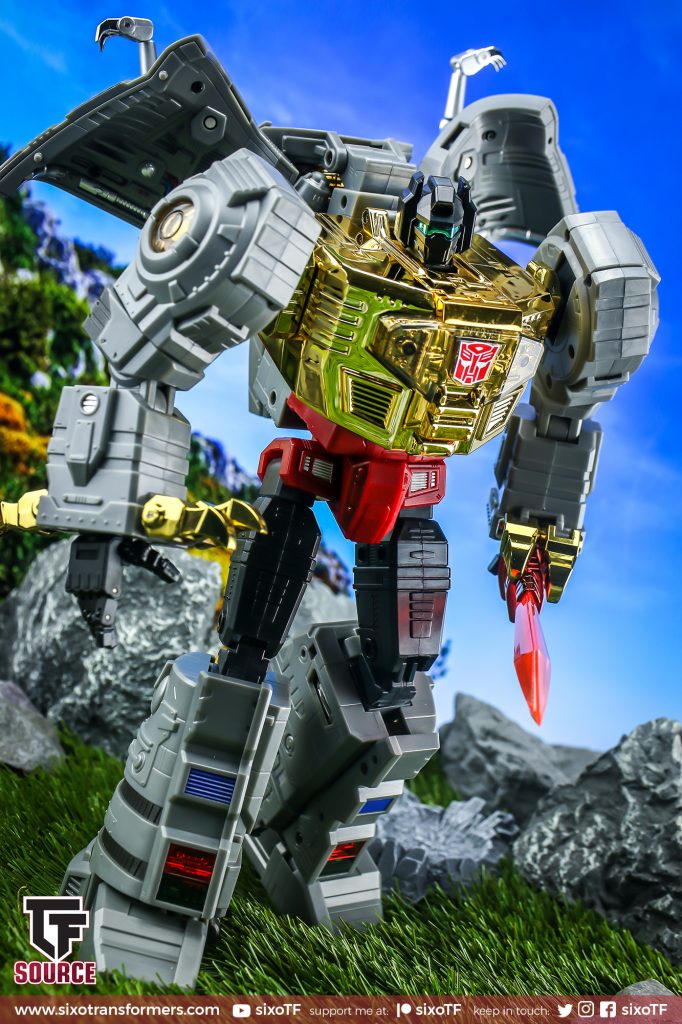 The much-anticipated FansToys release came out in 2017 and completed their Iron Dibot line-up. Grinder features a second head with a red visor, a set of red eyes for the dino’ mode, a sword and blaster (both of which have light-up gimmicks), a crown and came packaged with several other accessories related to the previous Iron Dibot releases too. 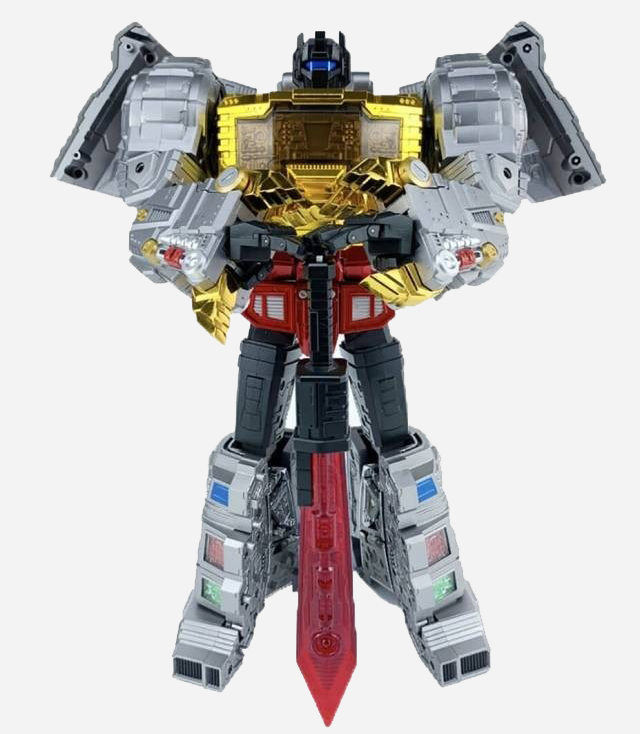 Part of Gigapower’s stylised and popular Gigasaurs line, Superator features both a blaster and sword as well as an eye colour-changing gimmick. There have been several releases of this mould in different finishes, including both chrome and metallic finish variants.

So, which of these options was right for me? Well, check the video below to find out!

So, there you go – it was a clear case for me, as FansToys have delivered a wonderful solution with Grinder that even manages to edge out the official toy for our list. For now, this one gets a “Definitive” status – it’s just that good!

Maybe there’ll be another official MP some day, or maybe another third party company will bring us a toy that knocks Grinder off his perch, but for now he’s taken his rightful place on our roster. That’s three characters done! 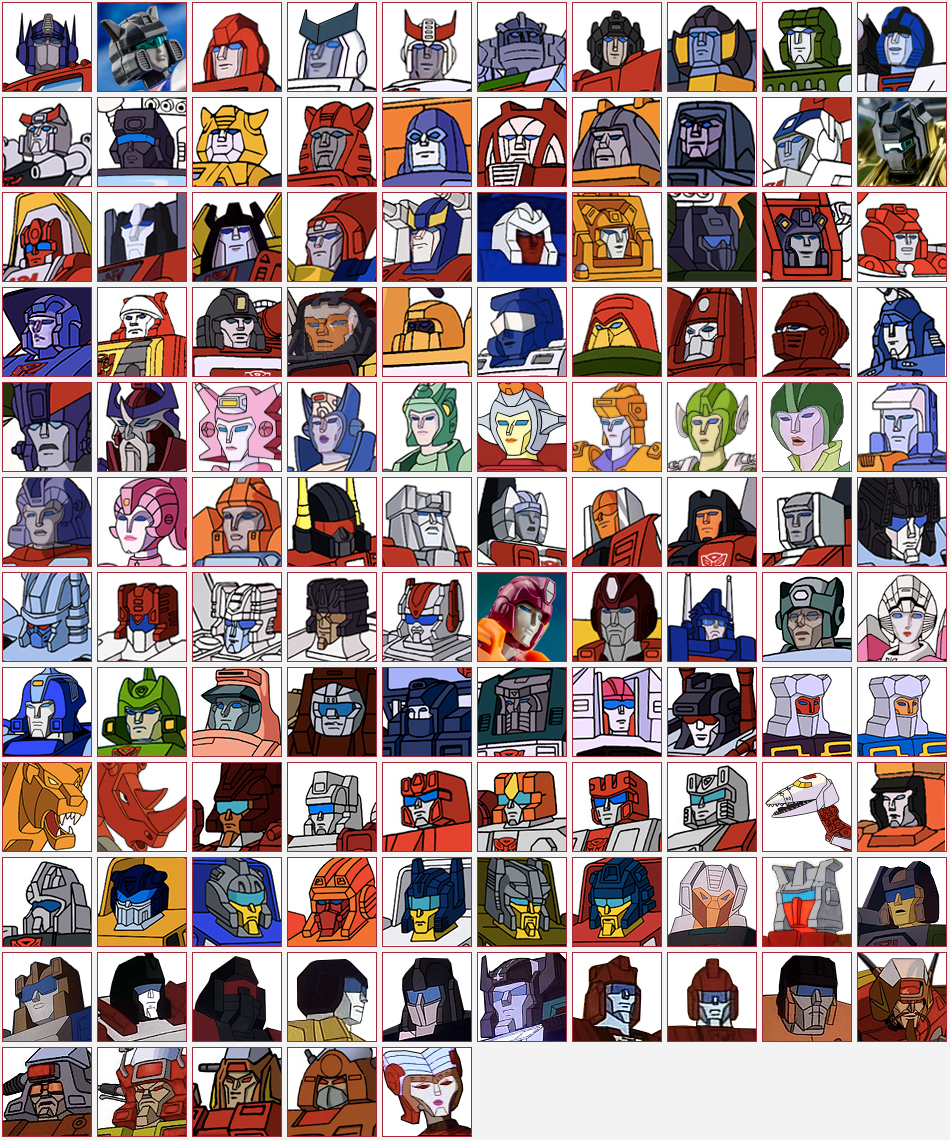 So there you go, that’s our third Masterpiece Masterclass! Which character should we cover next time?