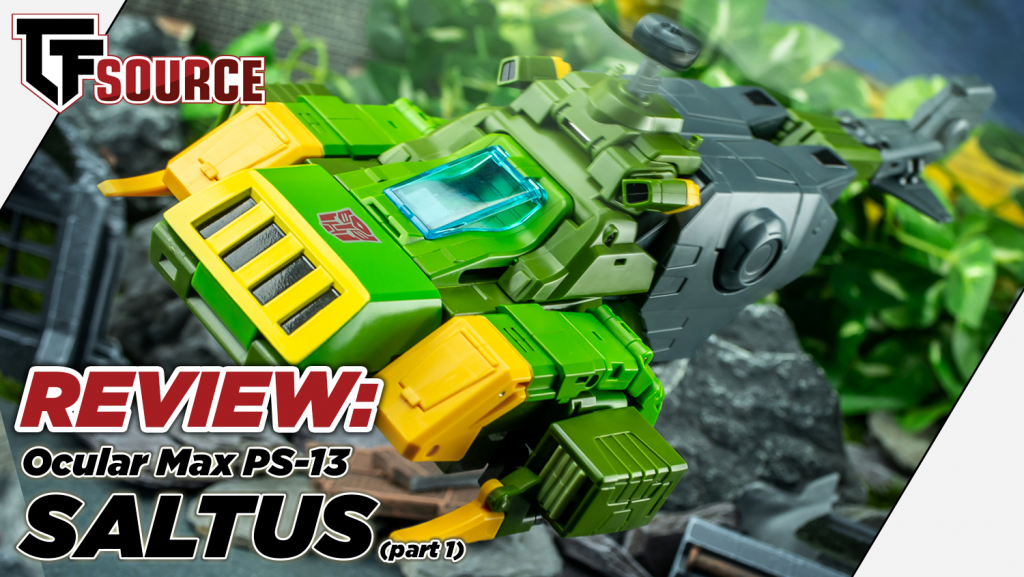 I feel a bit like a one-man marketing machine for Ocular Max at the moment. It seems that not a day goes by without me pumping out yet another rave report about some new product they’ve produced or whatever, but hey – who can blame me when it’s as great as some of the stuff we’ve seen from them recently, eh? Well today it’s nothing to do with their Combaticons but it is still something very exciting indeed. Here’s Saltus! 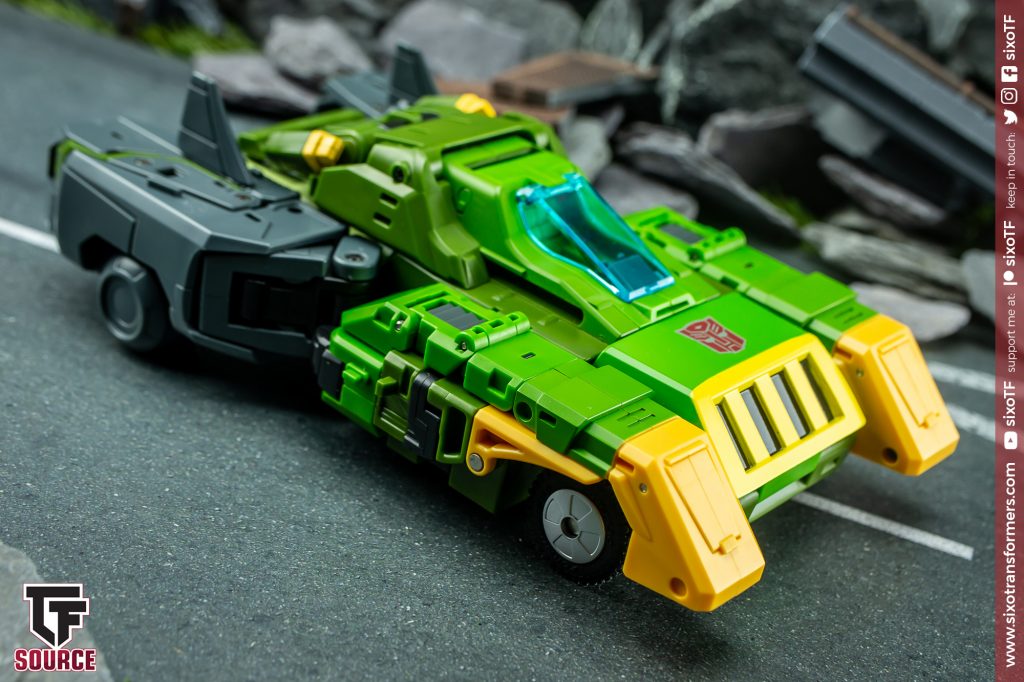 OK, so before we begin, an acknowledgement – I thought I was finally done with third party Masterpiece-styled Springers. I really, really did. After all, I’ve already been through Unique Toys’ beefy attempt, Open & Play’s fun but unpolished take, FansToys solid offering and I’ve even waited super-patiently for X-Transbots to finally bring theirs to the fore. After all that I was resolved that the FT solution was the definitive one for my collection, at least until the day TakaraTomy might finally unveil their own Masterpiece. So what changed? 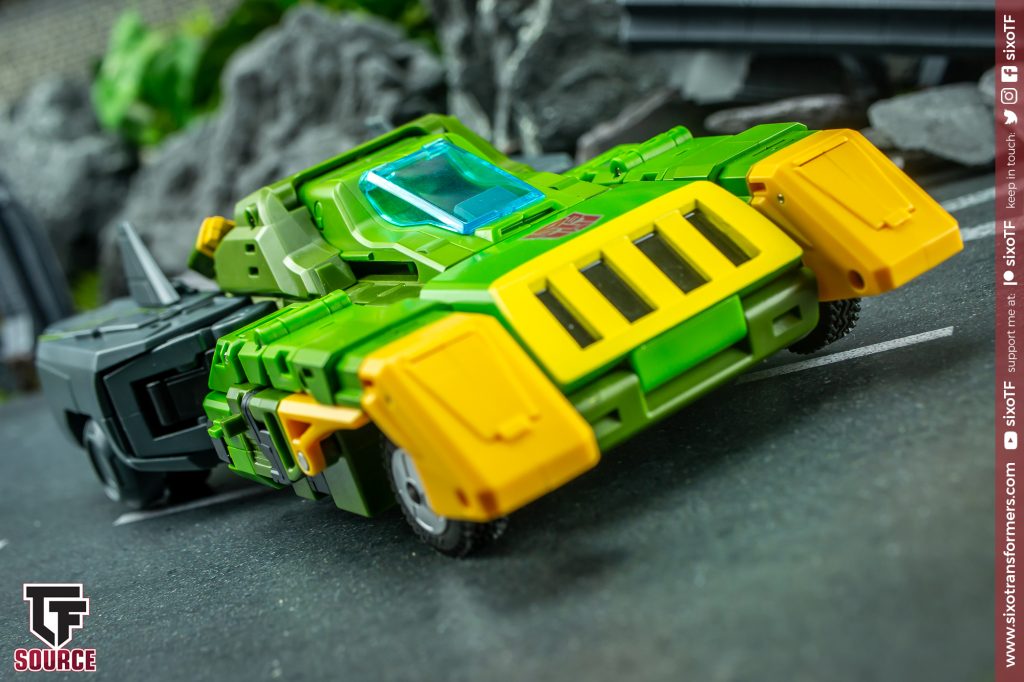 Well, I did think Saltus looked pretty magnificent from the photos I’d seen, even though my weariness over so many versions of the character had muted the spring in my step, as it were. Yet it was really the hugely popular word of mouth that finally sank it, as there’s an element of wanting to check this kind of thing out in person just to see what all the fuss is about, right? 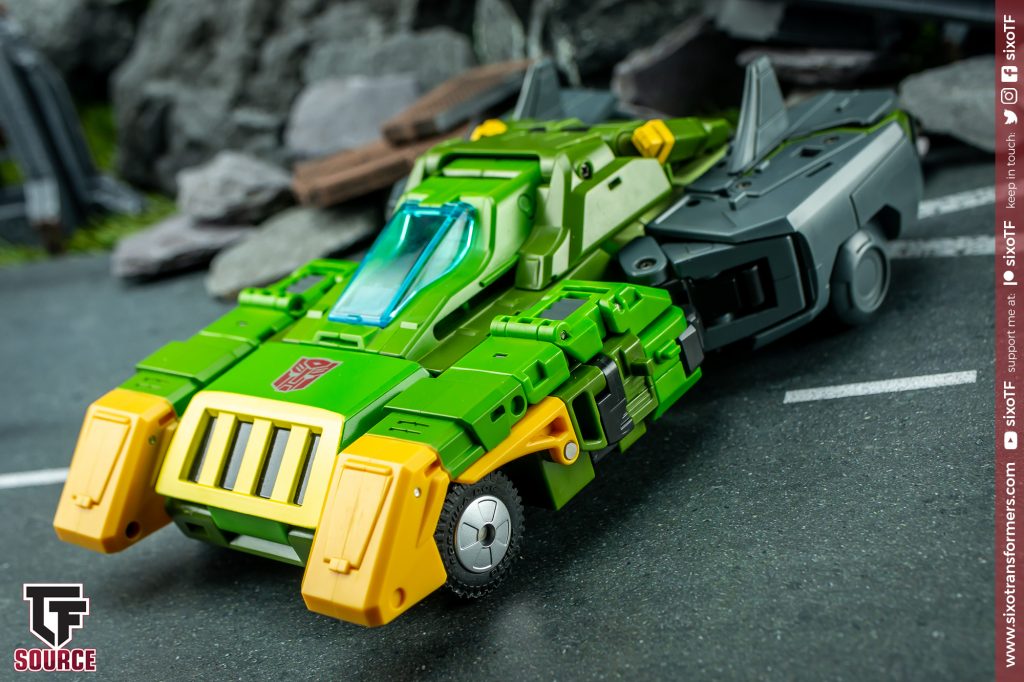 So here he is, my fourth 3PMP Springer so far. That’s the most versions of a single character in this style that I’ve owned, so in some ways you’d have to hope that Saltus is going to live up to expectations in order to make it worth the price of entry. Fortunately, I haven’t been disappointed so far. 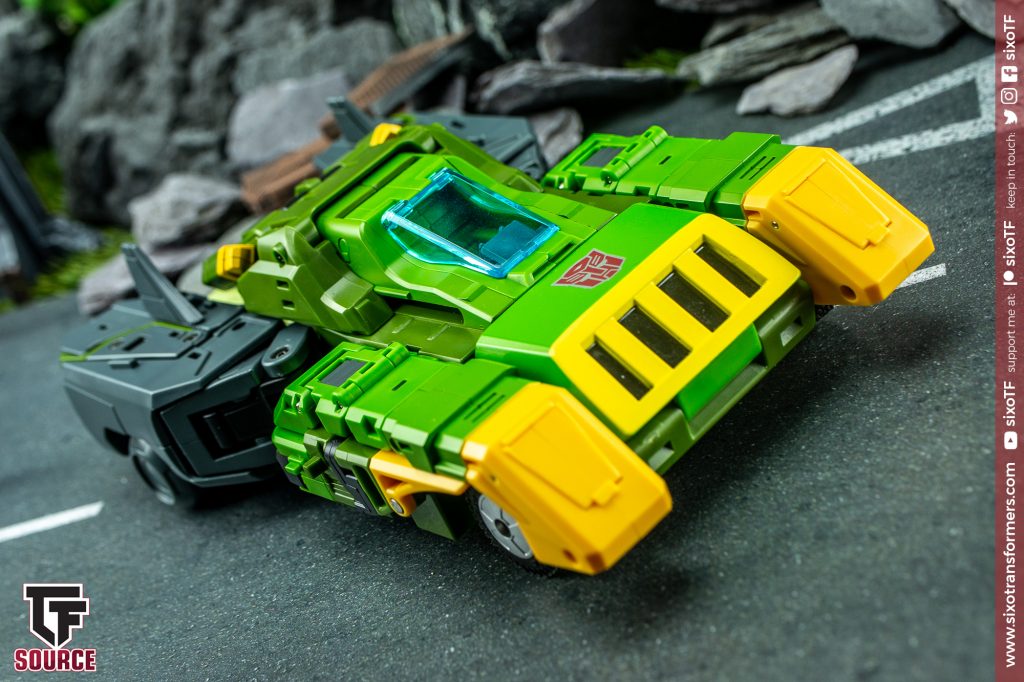 OK, let’s kick things off with the car mode, if only because it’s actually my least favourite of the three. That might sound like quite a decisive judgement to blurt out so early into this review, but I guess I’m just setting the tone for where we go from here, as it’s all up-and-up from this point out. 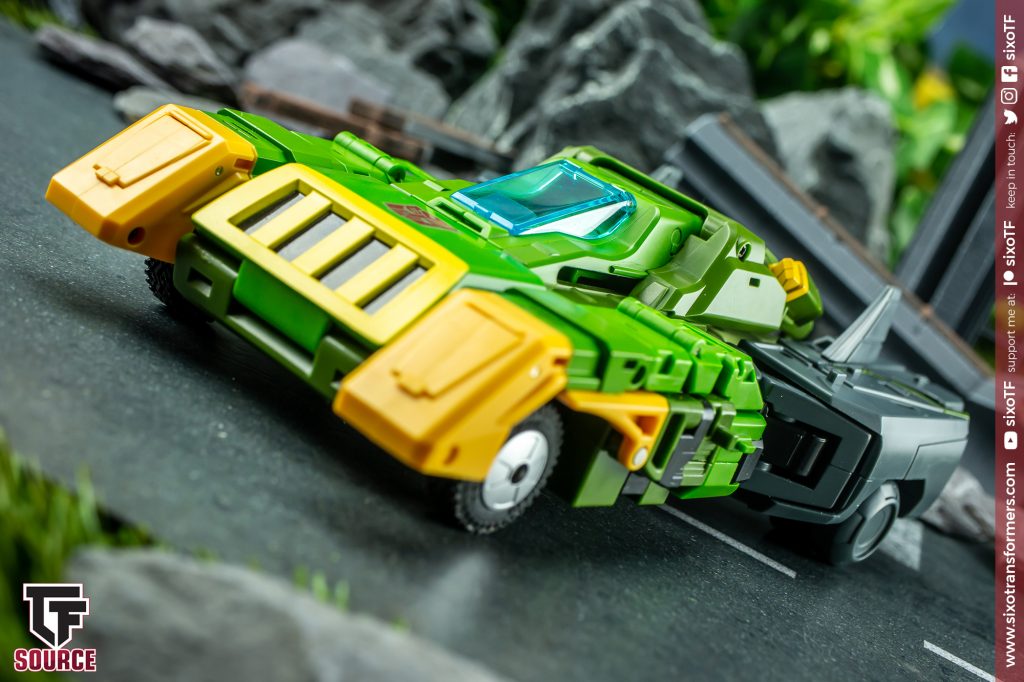 Not that the car mode is bad, mind – far from it. It’s just not exactly the most successful aspect of this figure overall, and that’s for several reasons. What you do get is a decent-enough, but by-no-means spot-on interpretation of the land-based vehicular form of the 1986 movie character. You know instantly who and what it’s meant to be, despite the fact that it’s so obviously stylised in many ways. If anything it looks like Springer decided to turn into a green Batmobile, if anything. 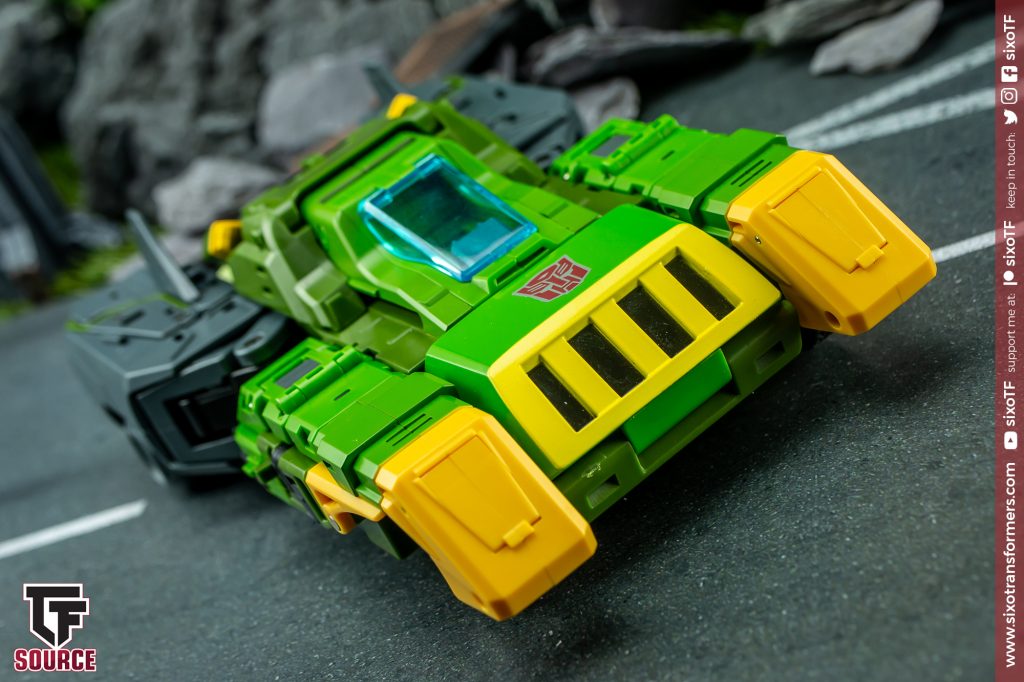 Still, it looks nice for the most part and definitely feels pretty quality in hand. It’s solid, well-built and very heavy indeed! I was quite surprised to first lift Saltus and discover just how much metal is loaded through this guy’s form, with diecast pieces evident in the chest and legs, amongst other places. 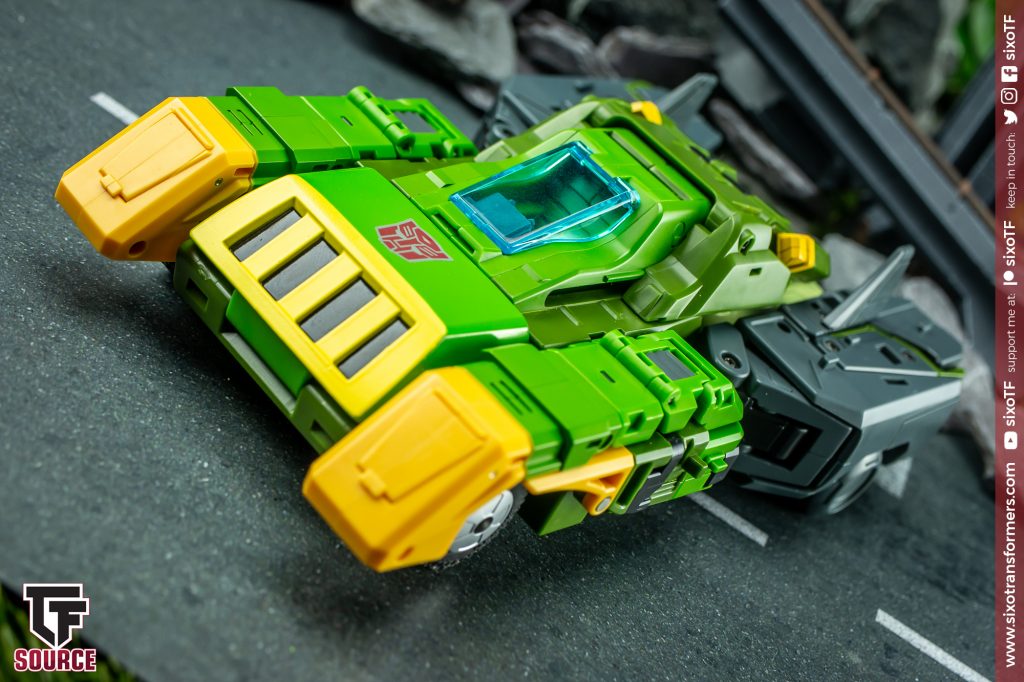 The paint applications and finish all look particularly spot-on, too. Ocular Max are earning themselves a solid reputation in that regard of late, and it’s no different with Saltus. He looks and feels very polished as a final product. 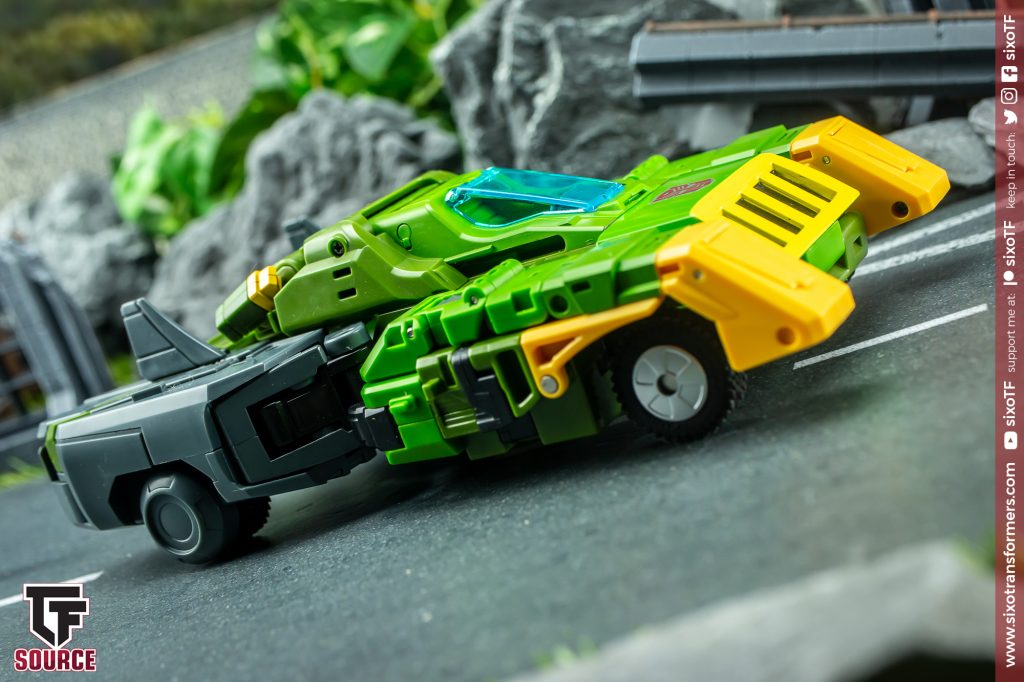 The downside is that this car mode can look a little messy from some angles though. I like much of what has been achieved, but a side view is anything but forgiving in how it reveals a lot of jumbled panels and joints all there for anyone to see. Of particular note are the pointy yellow sections designed for helicopter mode, which here have been folded up as approximations of wheel arches to arguably little success. 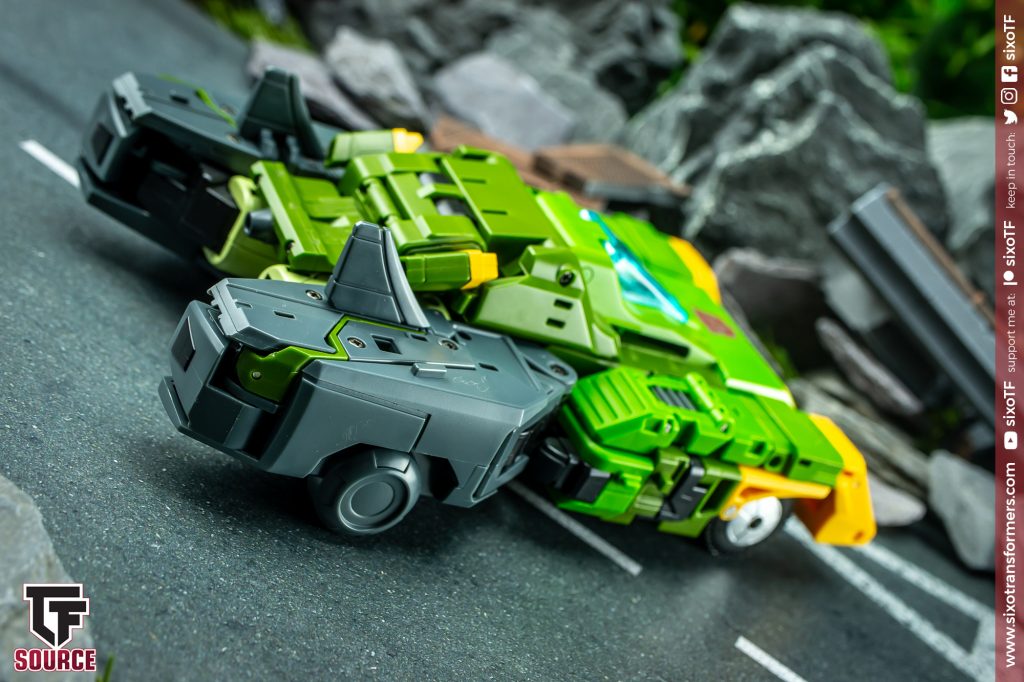 A rear view isn’t particularly smooth either, with the robot mode legs peaking out fairly obviously underneath the main body. It’s at this point that it becomes quite obvious which of the two vehicle forms was prioritised in the making of this design, I feel. 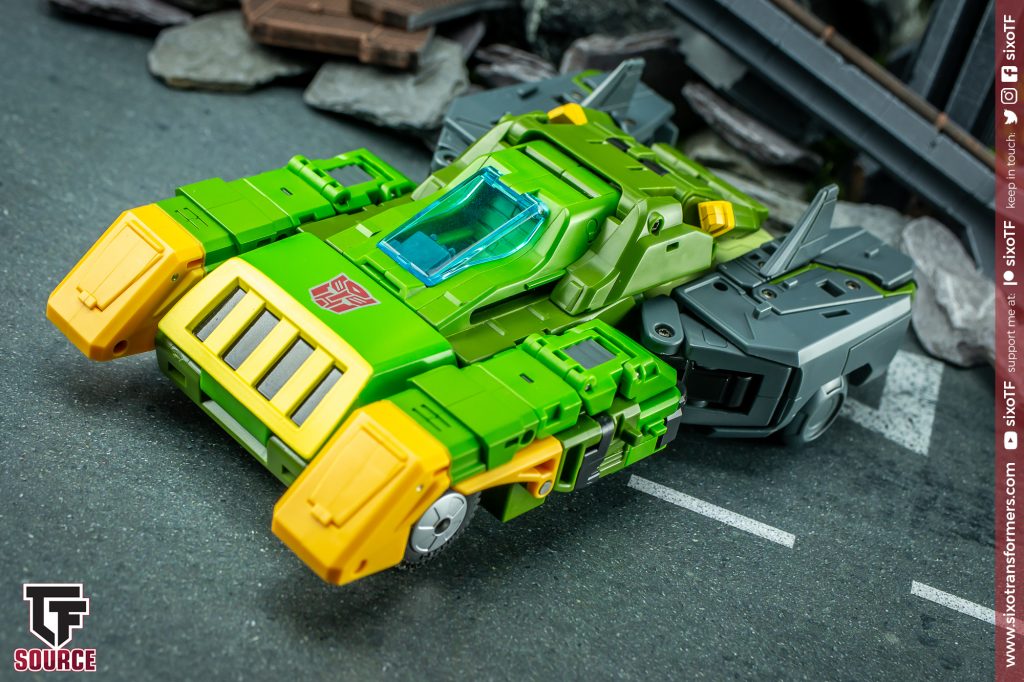 Having so much experience with other attempts at this character also means that it’s easy to see opportunities missed here, too, such as the way Open & Play’s offering incorporated a transforming cockpit to account for the different sizes it’s meant to be across the two alternate forms. Ocular Max stick with the one solution for both, and whilst it does arguably look much better in terms of aesthetics, it hurts this toy’s chances of achieving the accuracy to the cartoon model a lot of collectors will be looking for. 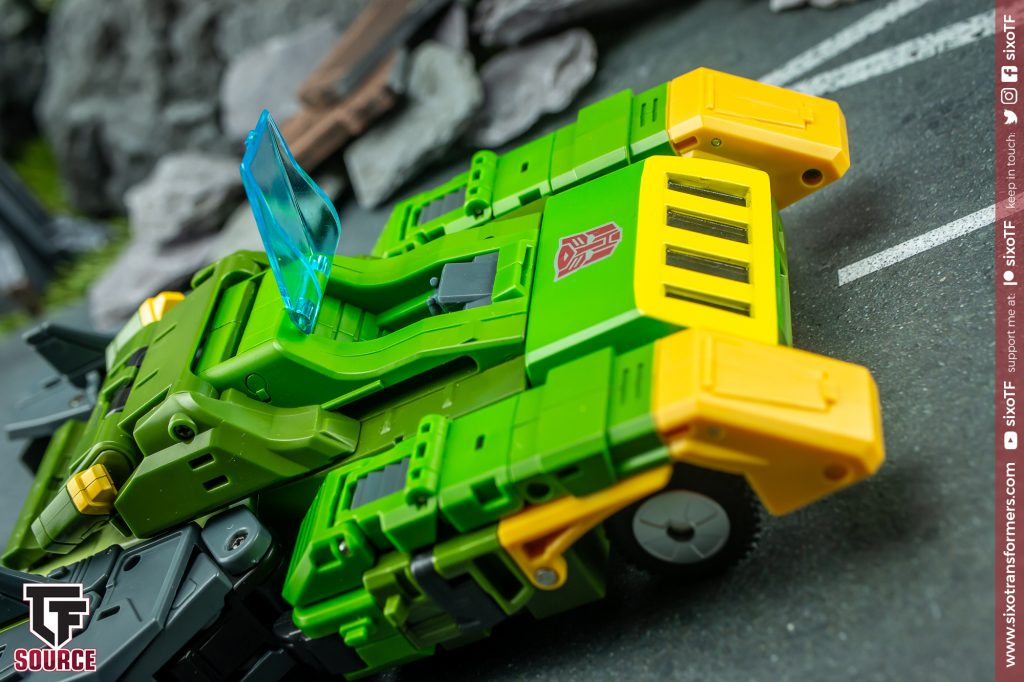 Still, accuracy isn’t everything, and at least here you get the chance for a spot of play value, with the cockpit opening up to reveal a small moulded interior. 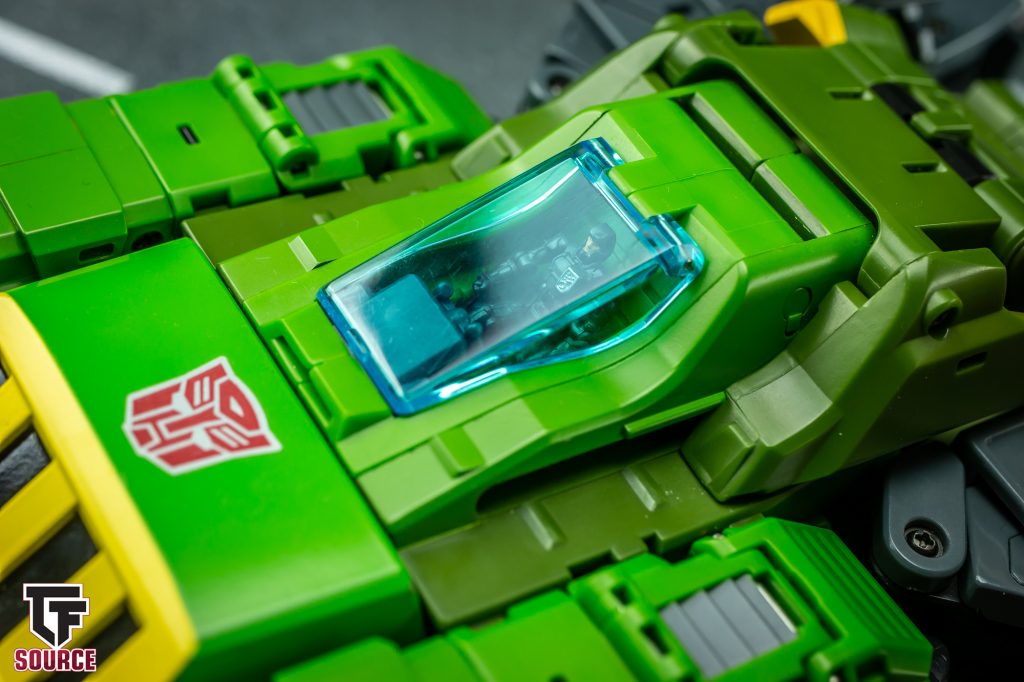 It’s sadly just a bit too small for the human Masterpiece minifigures such as Spike & Daniel, but it will hold a Diaclone reboot lad if you so wish (something I neglected to double check during my recent Unboxing video!). 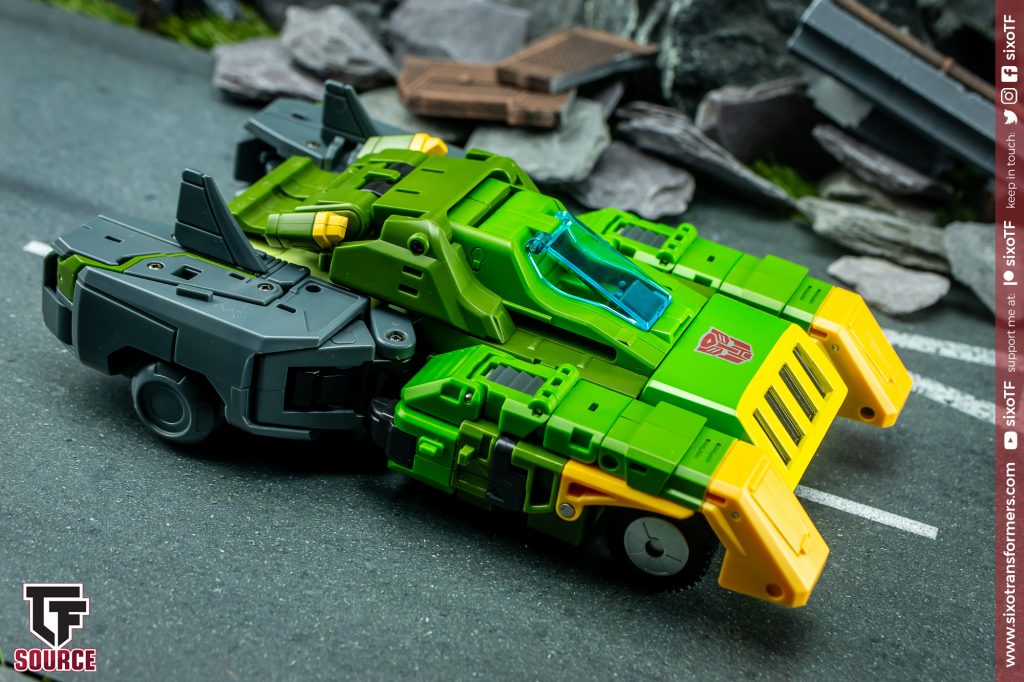 So as a first impression, this car mode is not a bad shout in terms of fit and feel, but maybe leaves just a little something to be desired in terms of how it brings the equivalent form to life from the cartoon. It looks nice enough all unto itself, but it’s definitely taken on a few compromises too. Still, the best is yet to come, as they say. 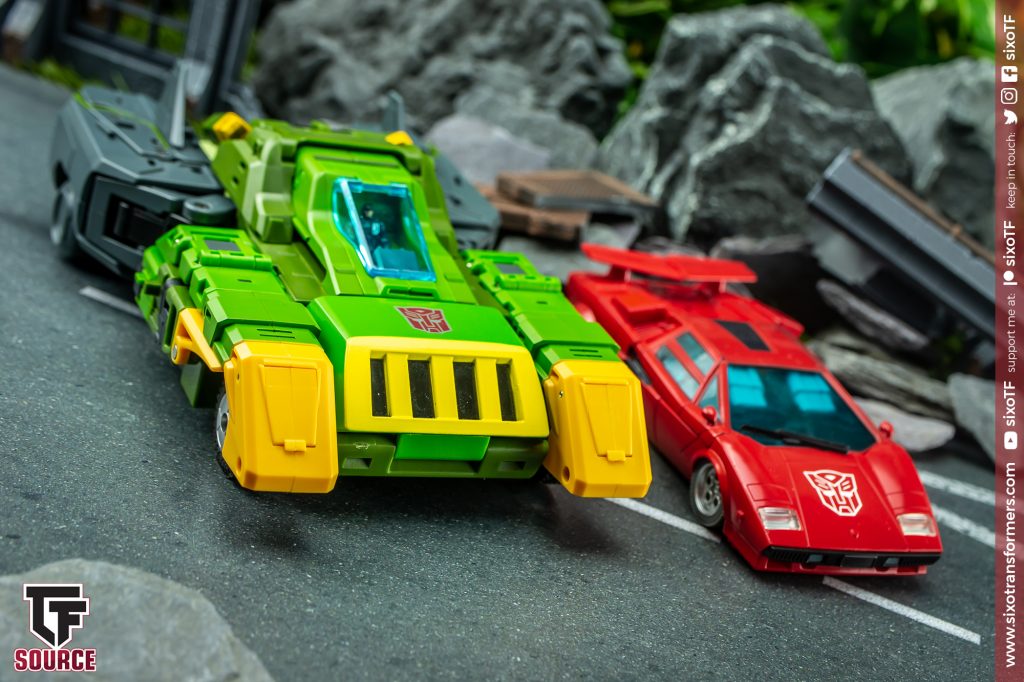 Besides, if nothing else this is a sizeable and chunky affair and definitely looks quite impressive versus the likes of your average Masterpiece carbot. 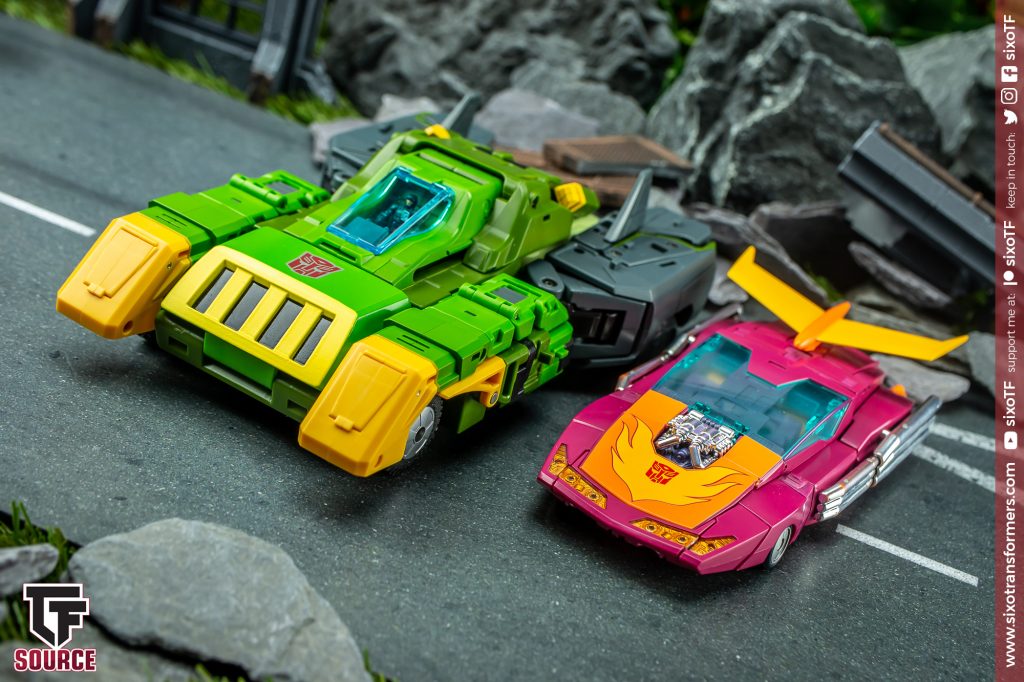 Plus the vivid colours are very eye-catching and look nothing shy of superb when lined up with other toys from the movie crew, such as MP-28 Hot Rod. 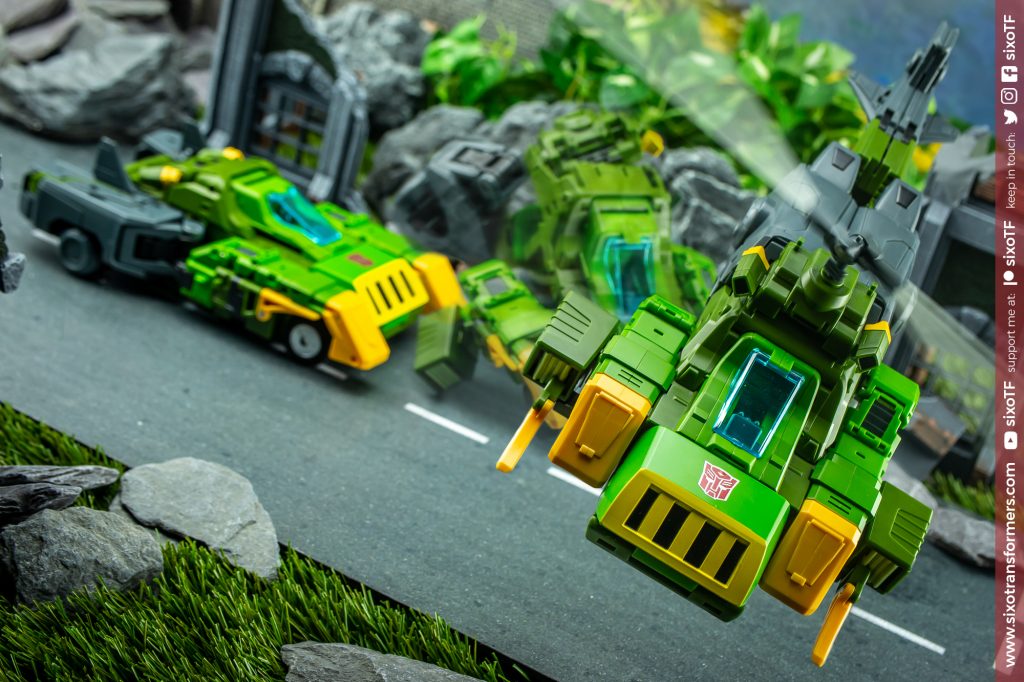 So, car mode done let’s crack on and take the helicopter mode for a spin, shall we? After all, the conversion between the two is really quite simple indeed, which is a definite bonus point for Ocular Max in my book. Of the other 3P options, I’ve known at least one or two that take far too long to twist and turn between alt’ modes, whereas I do appreciate the comparative simplicity on offer here. 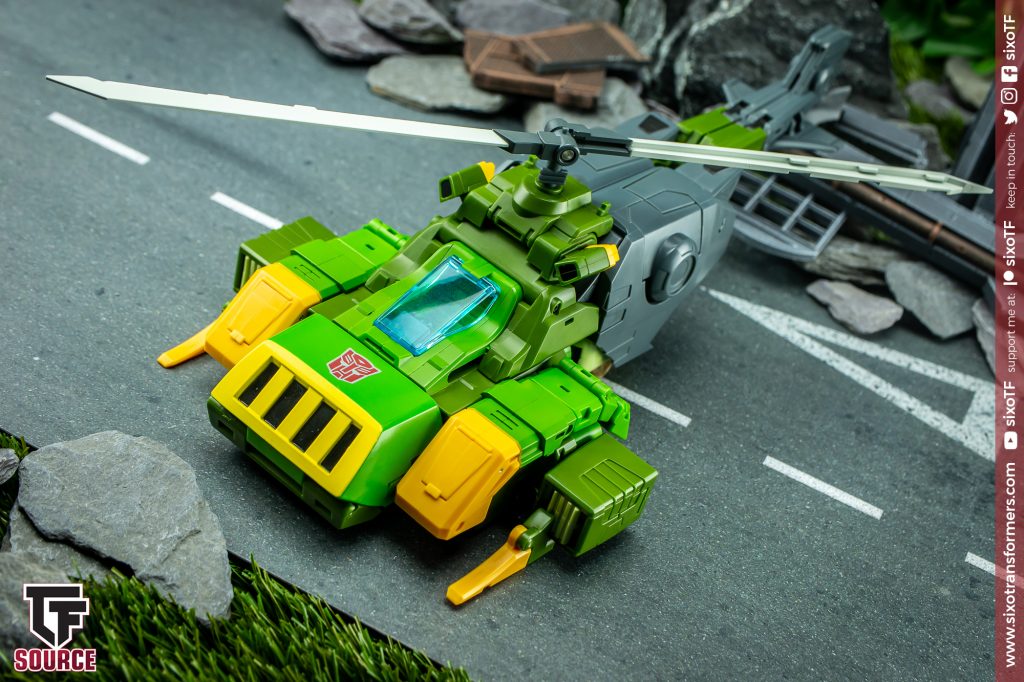 And what a glow-up, eh? Amazing to see how just a few quick contortions can make all the difference, as this helicopter mode immediately kicks the wotsit out of the car form, in my book. 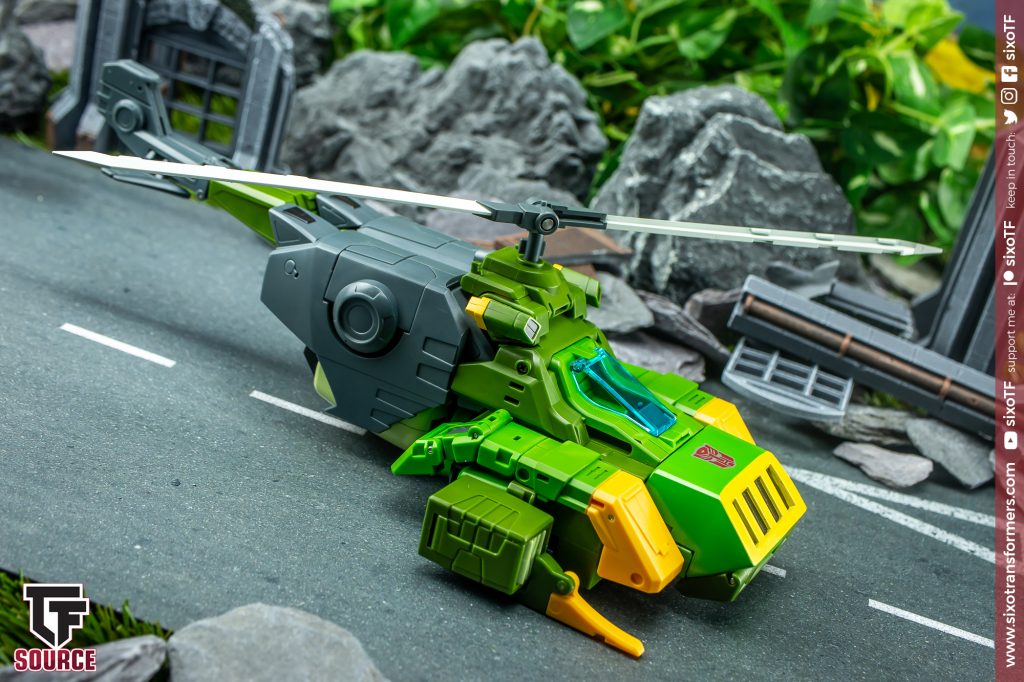 Seriously now, if you were in any doubt of what I said before about one of the alternate forms being prioritised over the other, how about now? The proportions are better, the design is more purposeful and the sculpt feels cleaner here. It looks fab. 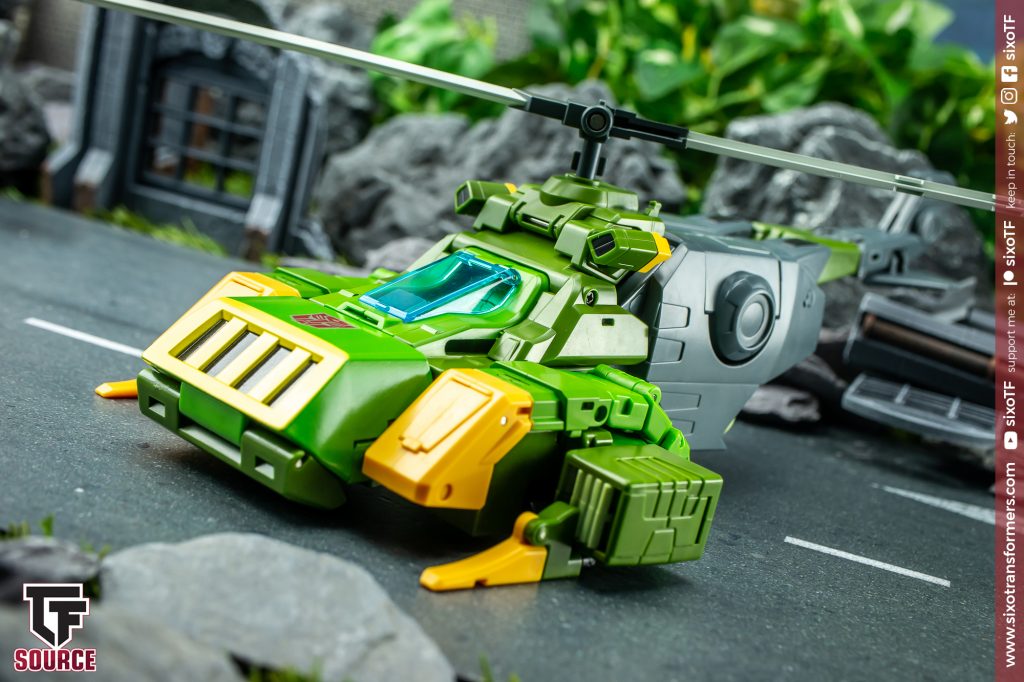 It’s also a much-closer representation of the cartoon, too, although in all fairness there are some liberties taken even here. That back grey section is a world away from the sleek green helicopter rear found on the animation model… but then when you really look at that thing, you also kind of wonder how on earth they could have recreated it faithfully in toy form to begin with, so I’m not exactly shaving off points for that. 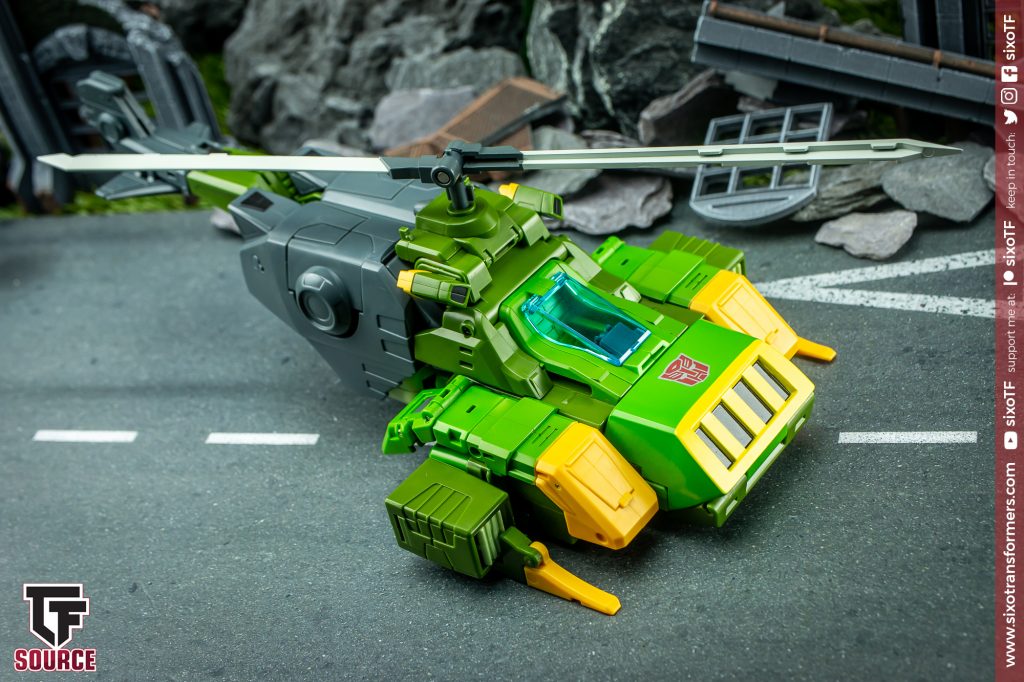 Besides, I think this actually ends up being one of the more accurate attempts of the various others I mentioned, and also happens to look pretty sleek as a result. There’s a whiff of kibbly stuff around the arms on the sides, but otherwise it’s pretty clean on the whole. 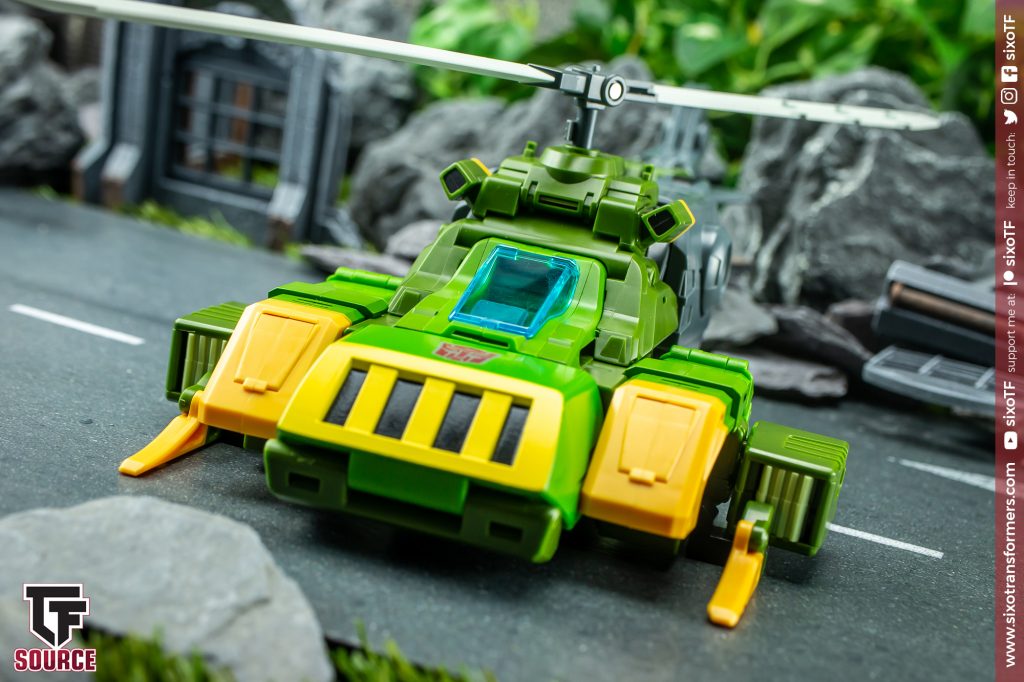 One thing that is odd is that the helicopter cannot “sit” properly on a surface without toppling backwards towards the tail. There’s no landing gear of any kind, but also because of the weight of it and how it’s designed, it’s impossible to position without the whole thing bobbing backwards. Very strange indeed. 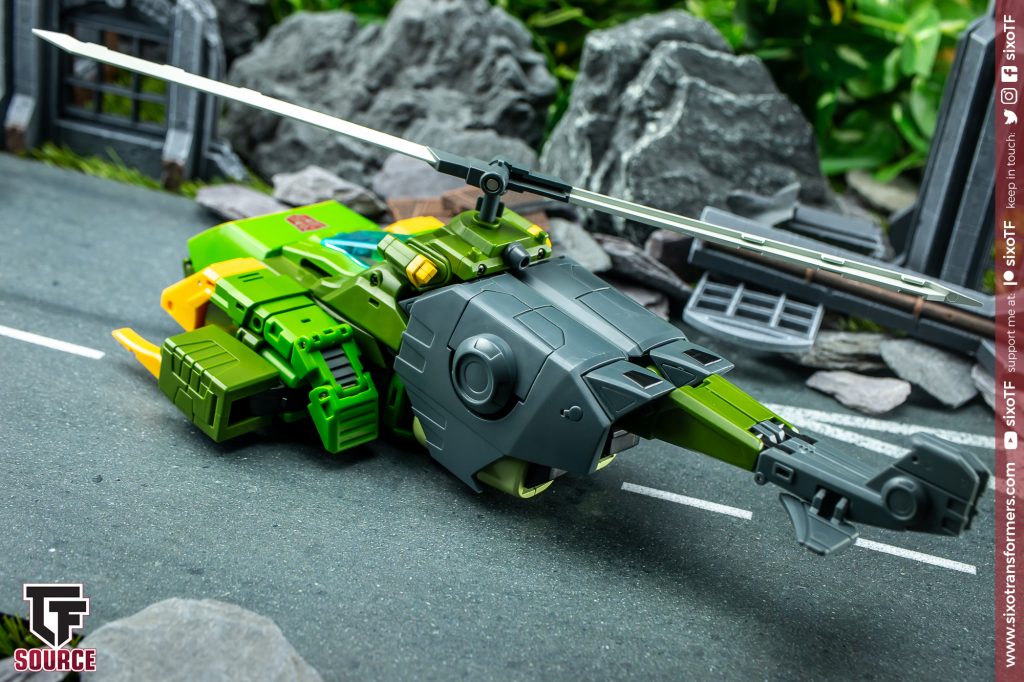 So full disclosure, I had to employ a bit of artistic trickery in order to get it stable for these photos, leaving me questioning why Ocular Max didn’t think to incorporate such a solution into the design itself. 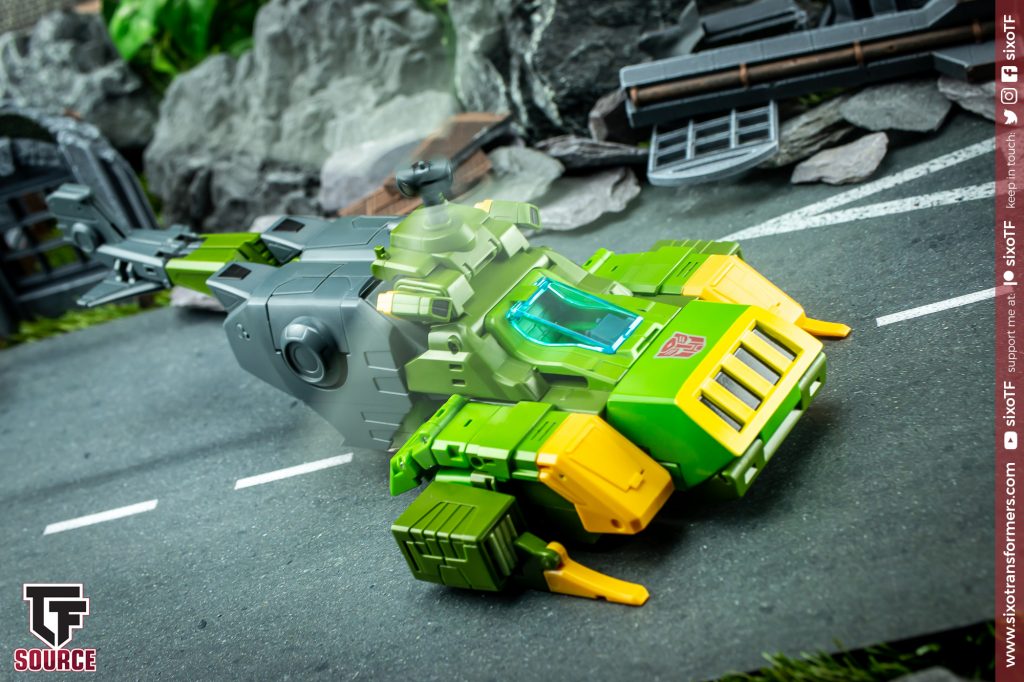 The other thing that’s a little bit of a shame is how difficult it can be to achieve a decent motion out of the rotors. I have no problem with them having used Saltus’ sword weapon for this (it cribs off the G1 toy after all, and it’s exactly how every other 3PMP attempt has seen fit to achieve it too), but sadly there’s a bit too much friction in the hole when it pegs in, meaning that it never spins much at all, even with a bit of effort. 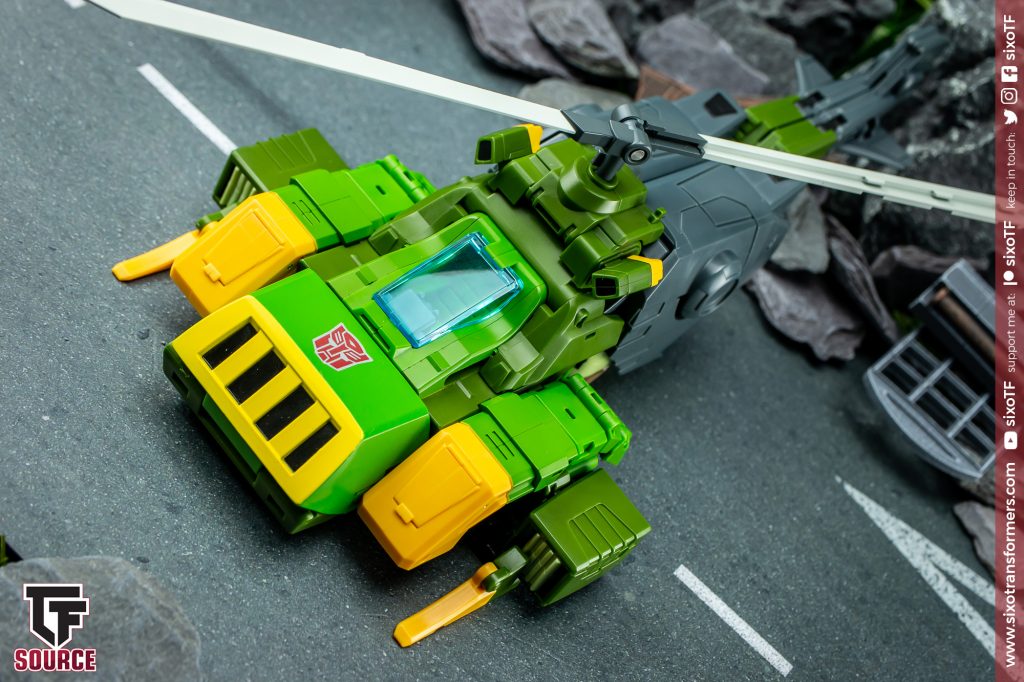 I guess if we’re being really nitpicky when you could also cite that the rotors on the cartoon model are actually green, something which FansToys took into account by having two different versions of their sword accessory. Again, it’s maybe just another example of how having seen this character done so many times before can be a hindrance to just enjoying this thing under its own steam. 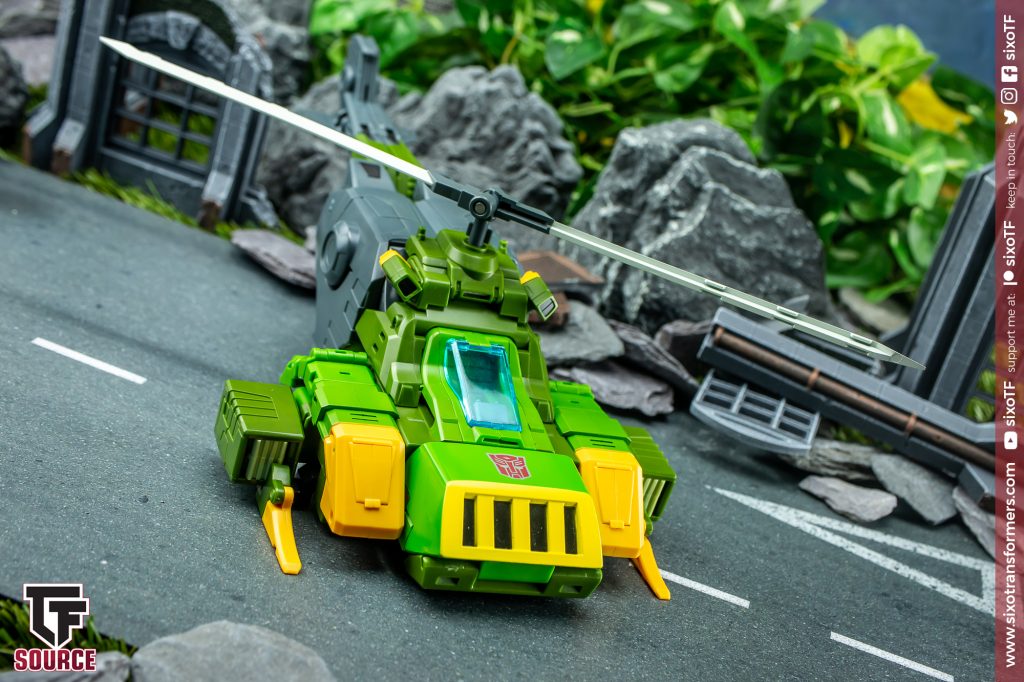 Anyway, nitpicks aside there really are a lot of positives to focus on instead, and I think if you are looking at Saltus as a potential solution for your Masterpiece-styled Springer then you’re unlikely to be disappointed by what you see here. It looks great and handles really well too. 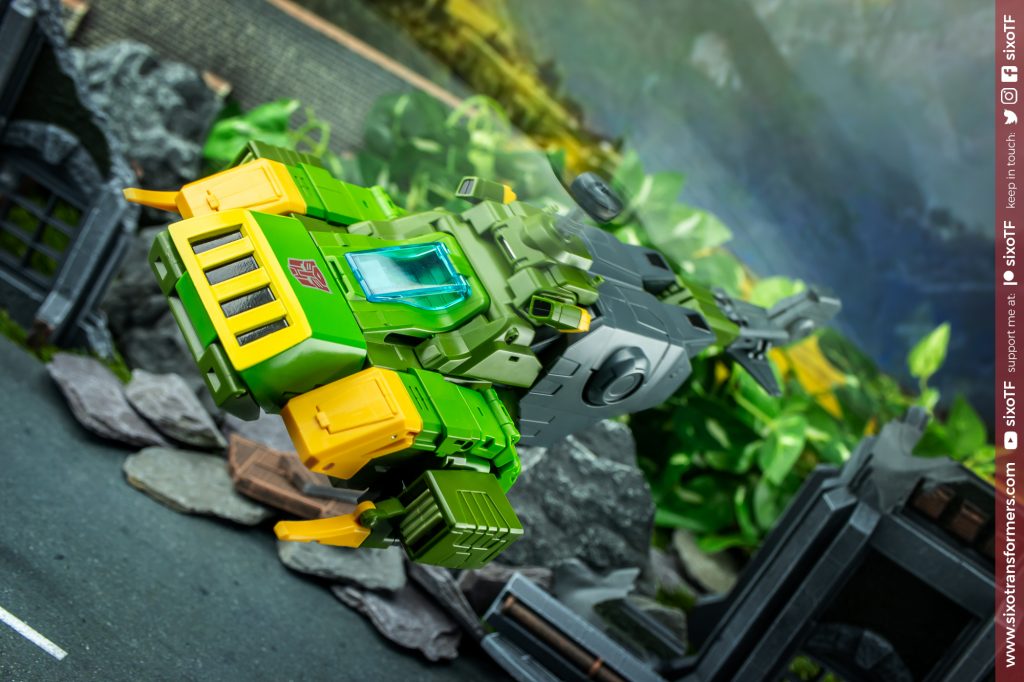 And hey, whilst it may not sit well all by itself, there’s no doubt it looks pretty majestic when positioned up in the air! Pretty swish! 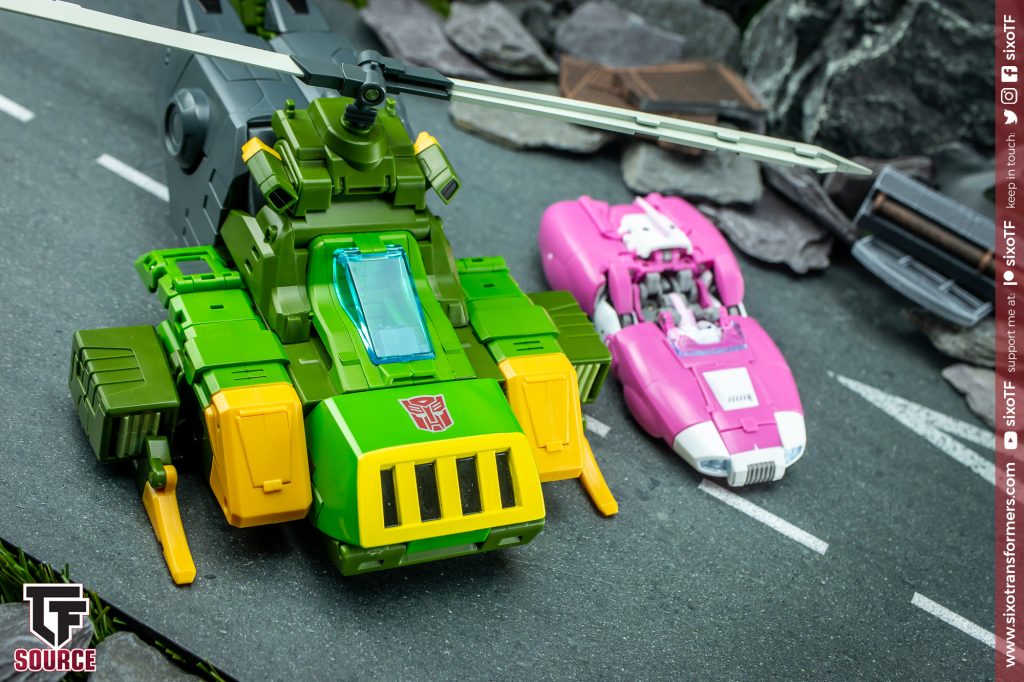 So, that’s two modes down and one very important one to go. Join us next time when we’ll be getting him transformed up and checking out that robot mode!