COUNTDOWN: 38 Transformers tweets from October that need to be seen! 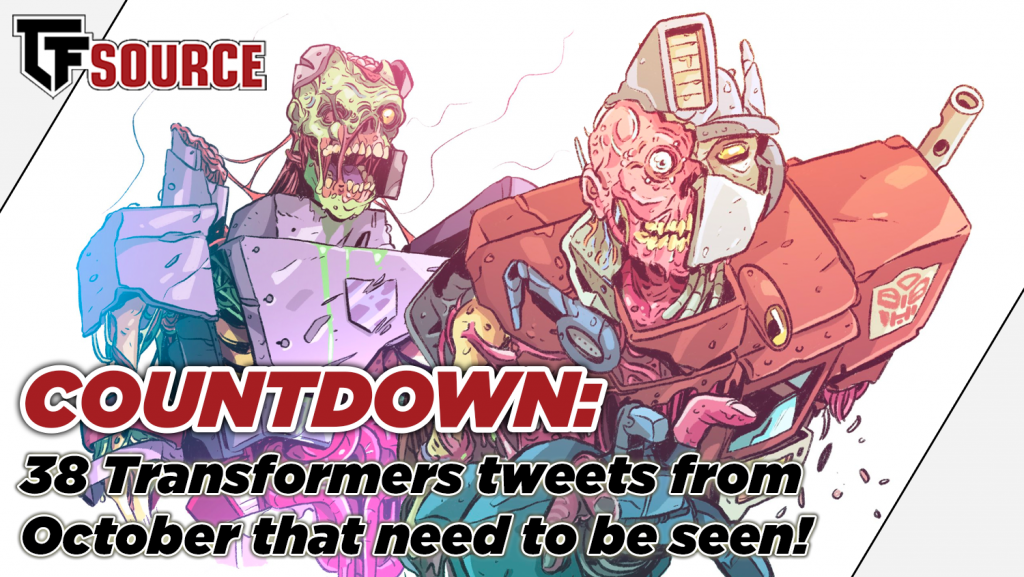 It’s that time of the month again, as November is soon upon us! As with previous months, there was all kinds of weird and wonderful robot-related activity online during October, so today we’re rounding up some of the absolute best examples from twitter for your viewing pleasure. They’re presented here in date order (well, kinda). Have a great month!

Here’s The Freakin’ Geek himself showing that if you have to wear a mask, you may as well have a bit of fun with it!

Welcome one & all to a wonderful Friday. For those that don't know, I love #Transformers from @Hasbro #Autobots #Decepticons #RobotsInDisguise #Fan pic.twitter.com/k98e6D0vIJ

FACT: Whenever Jason shares photos of his collection, you can hear a choir of angels singing in the background.

Photography – it’s all about those angles!

I'm still mad that parks and rec got taken off of Netflix pic.twitter.com/EnXjc1mxjX

If you transform Earthrise Arcee wrong, it looks like a car running someone over. pic.twitter.com/VPFXdApBco

It’s that guy! Uhhh, Ring or whatever, I guess.

It’s OCTOBER which means spooky goings on! Here are two creeps to get us started! #transformers #halloween pic.twitter.com/PHZbdqPvZg

Of course, October is the spooky month, and I don’t think that was demonstrated better than by this *incredible* artwork.

Winston’s art is always a pleasure to behold, and here there’s the extra thrill of seeing the vastly under-utilised Strika brought to life so expertly!

If they’re not from the Abominus region of France then they’re just sparkling Terrorcons.

“Tweet of the month” is not a thing, but if it was…

— Art is Back To The Mundanity of Non-Halloween Life (@ArtLikesRobots) October 7, 2020

OK, which one did you land on?

stay safe out there y'all ❤️ pic.twitter.com/kzMbqyypn3

— a reanimated cadaver bearing the likeness of Thew (@toygrind) October 7, 2020

See now, if they’d gone with this for the official communication…

MP-52 isn’t even out yet and every time I see it this is now all I think about.

John Transformer, the main character of the cartoon Transformers pic.twitter.com/Y9fCDwn96V

— Art is Back To The Mundanity of Non-Halloween Life (@ArtLikesRobots) October 10, 2020

I was trying to remember this guy’s name.

how it started how it’s going pic.twitter.com/qGzJDfE7sq

Poor, poor Windcharger – forever relegated to having his lifeless husk being the butt of the joke.

This is every Megatron and Starscream pic.twitter.com/lXUjWYRWG2

A lady Overcharge. Maybe she got left behind by the Quints and developed her own identity. pic.twitter.com/ghHmAawlpf

Miner Edgar is often pumping out fantastic artwork like this, although Overcharge here certainly caught the eye!

y'all ever think about the decepticons leaving the battlefield with multiple casualties and horrific injuries and then astrotrain switches to shuttle mode and flips them all into the ceiling pic.twitter.com/19x2wCbRo1

— a reanimated cadaver bearing the likeness of Thew (@toygrind) October 15, 2020

I lost it at “absolute madman”, I won’t lie.

Oh you think Twitter gets controversial sometimes? Don't think shit never went down on the letters pages of the Transformers comic. pic.twitter.com/G9zoK8886o

Brian McFarlane has a lot to answer for.

Who doesn’t love Tigertrack (he was last week’s Toy of the Week, after all!)? Well here’s some *stunning* artwork to show how he’d have looked in animation-style!

The moon news tease certainly captured the imagination this month, but more than a few people had just one thing in mind…

How tall is sludge? 🤨 pic.twitter.com/p9NaxoNPkU

OK, so this tweet is from a couple of months ago, but as it was RTed back again this month it’s getting thrown in here (also because it’s too good not to share!).

So, I FINALLY completed my display here! Want to give a shout out to my buddy, @Scotty__P, for some help hooking me up with some Tajara Spychangers (thanks so much, buddy! Miss ya tons!): pic.twitter.com/kNup3oVrep

Anyone else want this repaint now?

— Art is Back To The Mundanity of Non-Halloween Life (@ArtLikesRobots) October 23, 2020

— Art is Back To The Mundanity of Non-Halloween Life (@ArtLikesRobots) October 24, 2020

This is some outstanding custom work!

Just playing with my dollies on the carpet, folks. pic.twitter.com/yAwUdT8RlJ

How great do the new Micromaster Modulators look alongside their G1 counterparts? Brilliant.

This is just the cutest.

The one-and-only Geoff Senior doing what he does best. WOW.

Thanks @MarshallJulius !
These arrived just in time for Halloween!

Who would win?
Optimus vs. Dalek pic.twitter.com/xcUtw2FseY

Oh, and just another exceptional bit of custom work from ChromeTyranno to round out the month, eh? Why not.

So that’s our list. Did we miss any other great Transformers tweets?

COUNTDOWN: 38 Transformers tweets from October that need to be seen!