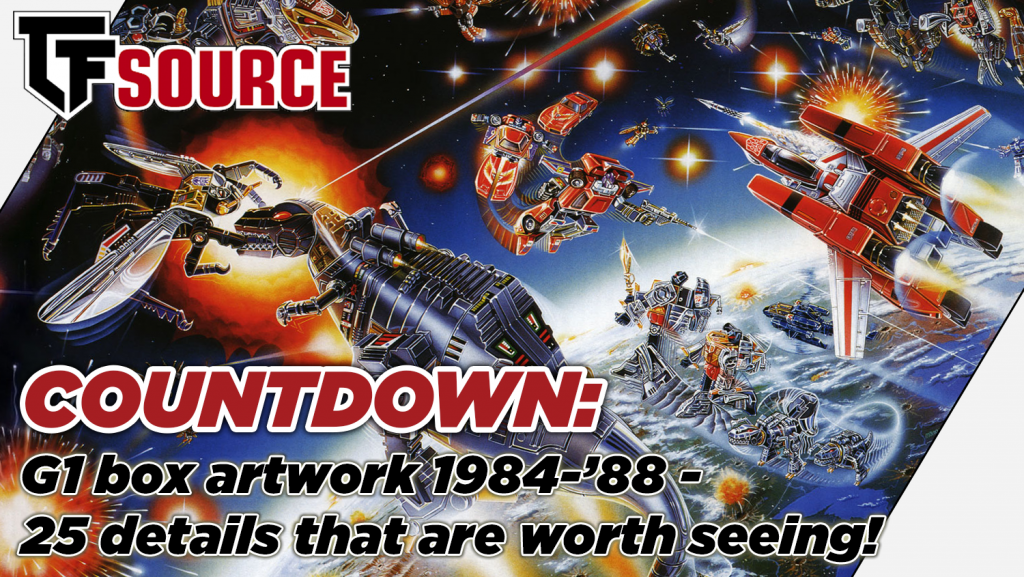 For today’s Countdown we’re taking a look at some of the breathtaking back-of-the-box artwork found on vintage Transformers packaging! For anyone growing up with the franchise in the 1980s, these stunning paintings brought to life a whole word of imagination; for anyone who’s discovered them since, they’re an interesting window onto a time when the franchise was still establishing itself. There are many small details that create comment, raise questions or promote intrigue, so that’s what we’re examining today! We’re focusing on the first five years of the franchise as there was a dramatic shift in the style of artwork from 1989 onwards. So with that, let’s check out 25 details that are worth seeing! 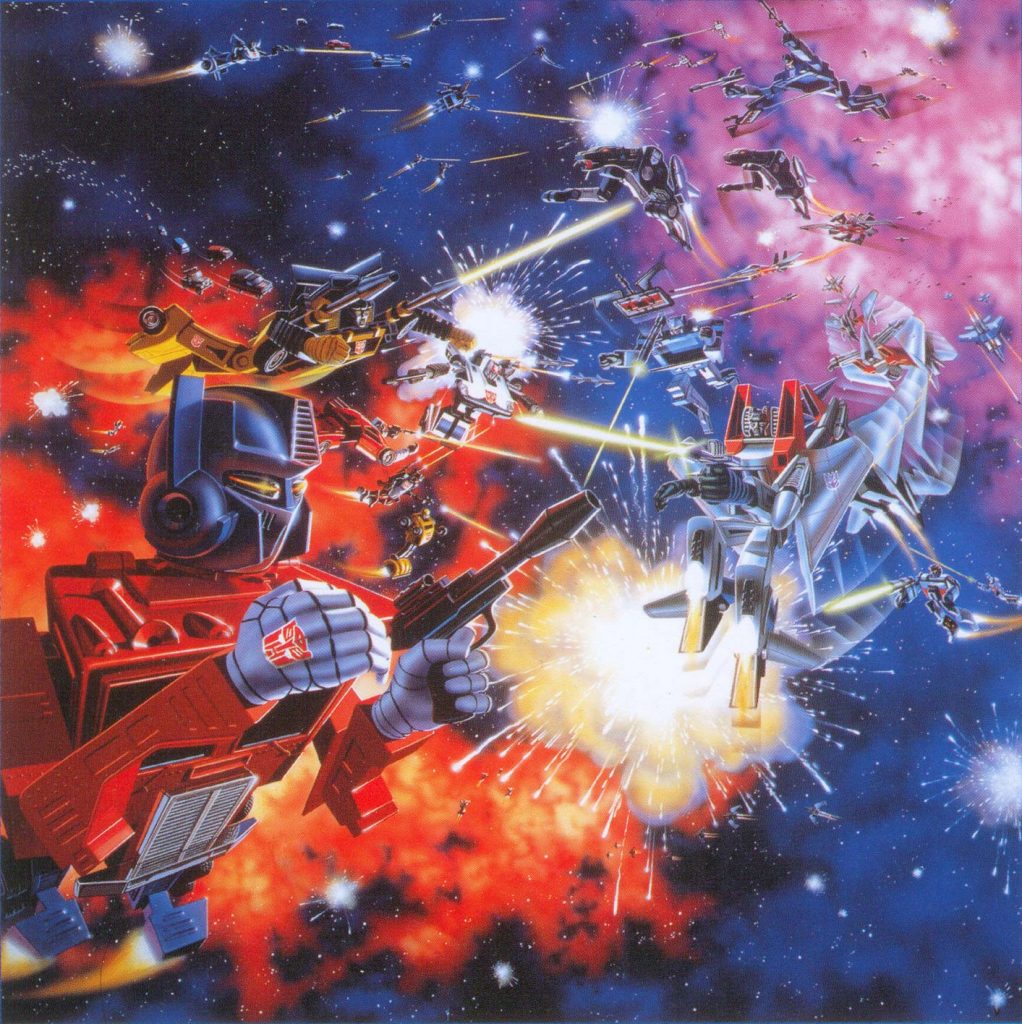 This first piece artwork found on the reverse of Transformers packaging basically set the template for many years to come, and in some cases is still doing so even today. Hand-painted by professional illustrator, David Schleinkofer, it depicts the first year of toys in breathtaking detail, all with a healthy dollop of creativity that captured the imagination of many children back in the mid-1980s. David’s work also includes many other examples of toylines and science fiction properties, including the likes of Robotech.

#24: Optimus looks like his toy, albeit with a few flourishes 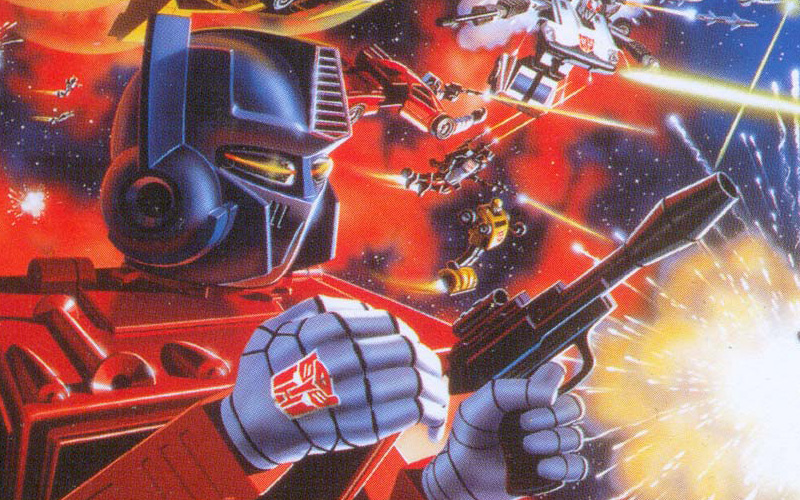 The 1984 artwork features Optimus Prime quite prominently on display, although here he looks much more akin to the actual toy model, as opposed to the cartoon appearance that has become so well-known for many. However there are some notable variations, including detailed light grey hands (instead of blue) which also have an Autobot logo proudly adorned on the outside, and a distinctly different blaster compared to OP’s signature rifle.

#23: Other characters look very reminiscent of their toy designs 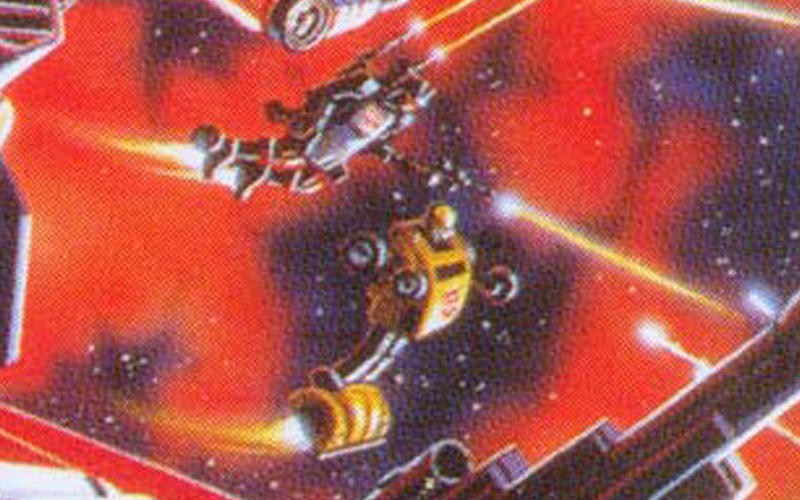 In no great surprise, plenty of other characters look just like the toys themselves, which makes sense considering that this artwork is on the back of the toy packaging and the work would have been completed before the animation & comic depictions had likely been completed. Of note here are examples such as Bumblebee and Trailbreaker, who both look quite different to their fictional portrayals.

#22: Starscream has some colour differences to the toy 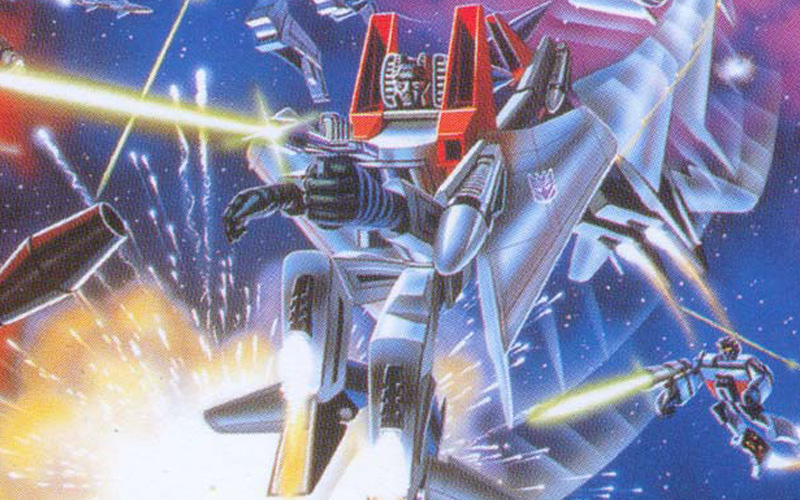 It’s not as obvious as Optimus’ grey fists, but Starscream has some variations of his own. These include the missing red stripes from his wings, dark blue/grey flaps instead of light grey, and black detailing on his legs instead of blue. He also seems to be missing stickers such as those inside the intake sections on his shoulders. 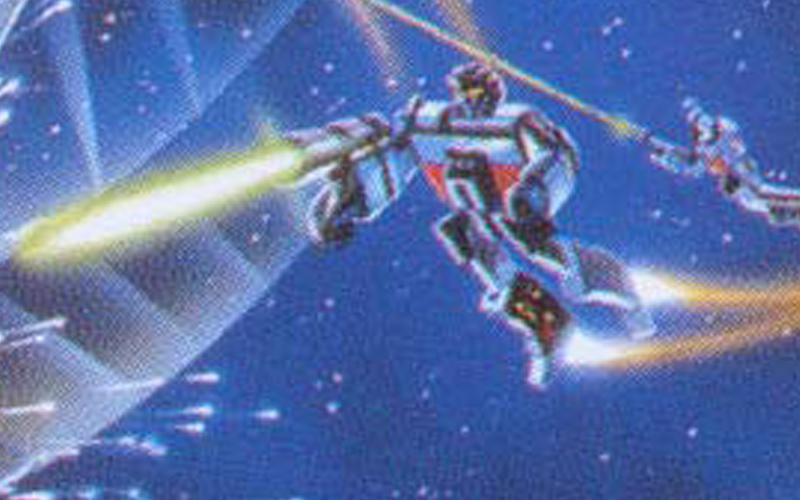 That is indeed intended to be the maniacal Decepticon leader, although he looks rather different to many portrayals you’ll find in Transformers media. Instead, this painting resembles the original Micro Change artwork of the toy quite closely, so presumably the artist had access to such material as reference somehow.

#20: Sunstreaker is firing his rockets from his shoulders 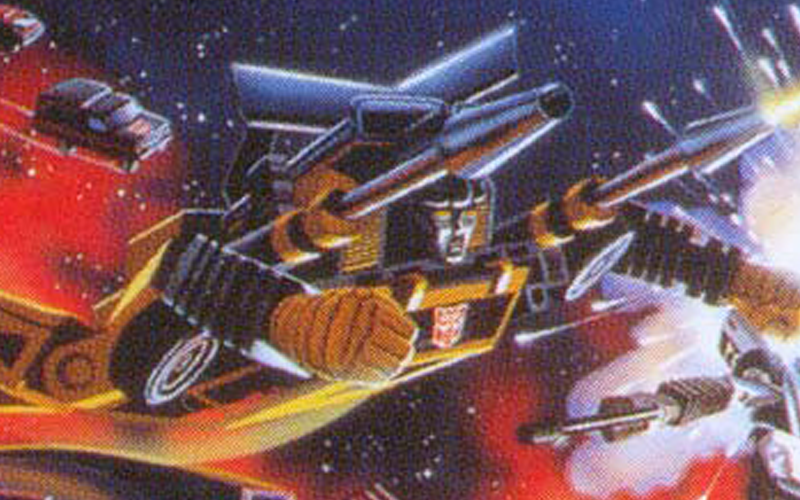 There are a couple of weird things about this depiction of Sunstreaker, such as how the wheels typically found on his shoulders appear to now be below his arms, and how the Autobot logo on his chest appears to be on top just underneath his neck. However, the one that is highly noticeable is that the rockets that typically slot into his wrists in place of his hands are now featured in his shoulders instead, in place of the small yellow accessories that typically live there. 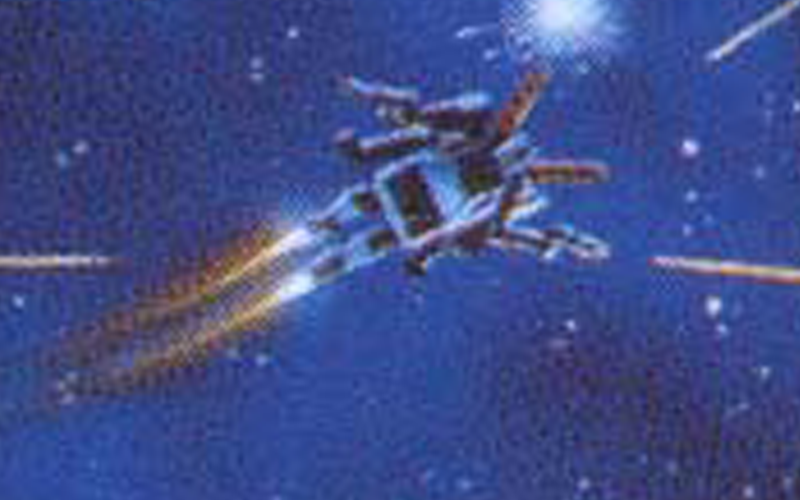 Some of the elements that definitely stand out most on these early box art examples are the characters who cannot be easily identified, such as this unknown solider. Considering it is supposed to be a 1984 toy then logically it could be Wheeljack, although my best guess is that it’s actually a depiction of the Hoist mould (which was already known from Diaclone). Any other thoughts? 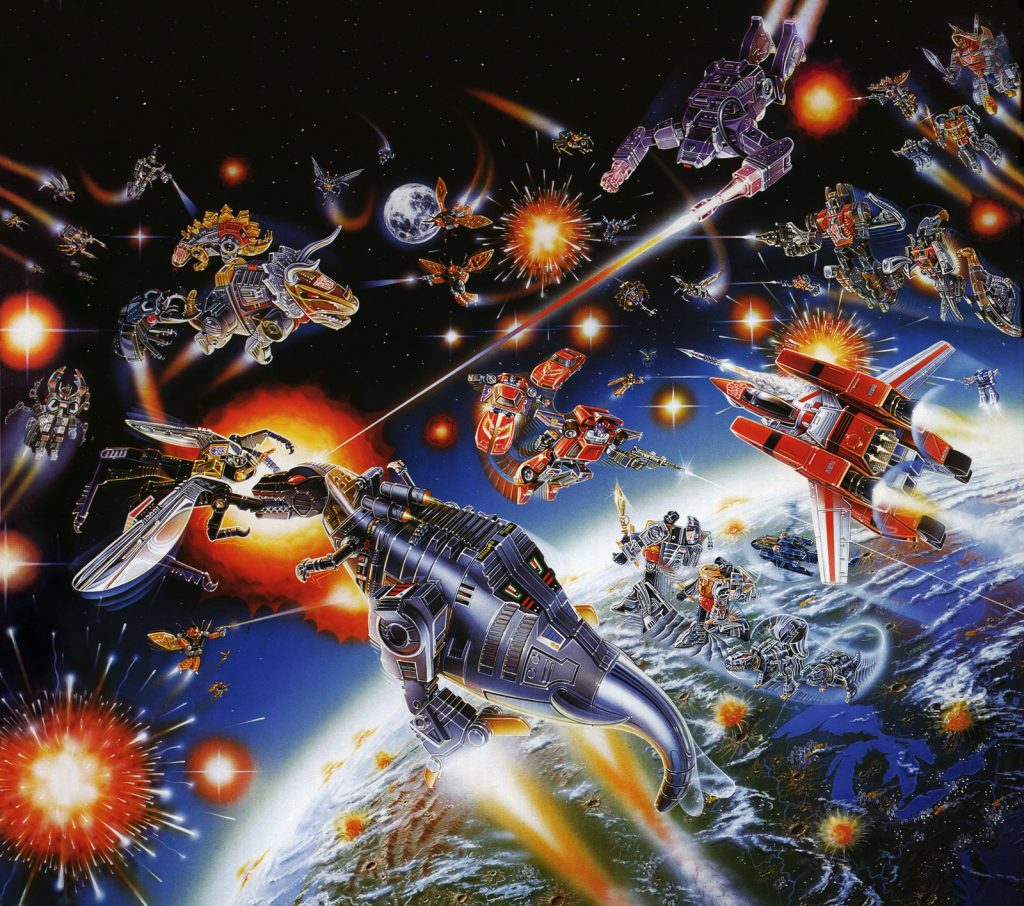 For many fans, the 1985 artwork is a definite highlight of all the examples featured here, which I’m sure is due to how it makes use of favourites such as the Dinobots and Jetfire. Yet also seen are lesser-known examples such as the Deluxe Insecticons, which is interesting! This work was again hand-painted, this time by artist, Jeffrey Mangiat, who had previously done work in the automobile industry. 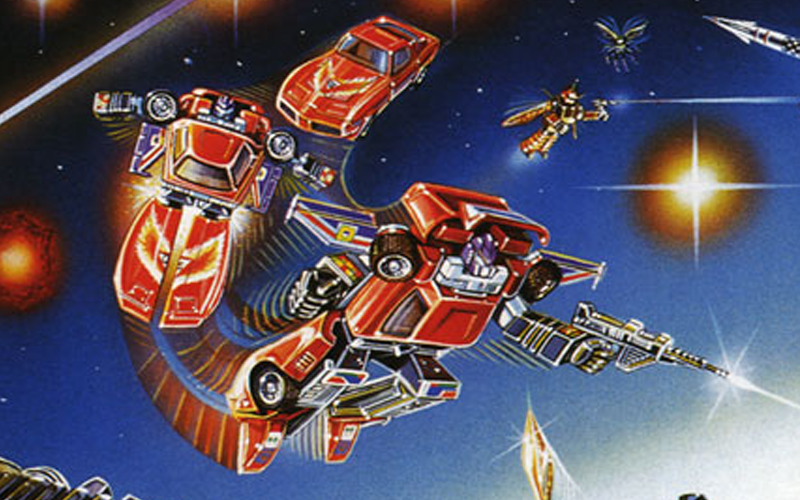 Long before the red Tracks mould was known as Road Rage, it could be seen in prominent position on the back of the 1985 packaging despite not being part of the assortment of available toys at the time. Quite clearly this was based on the Diaclone toy. 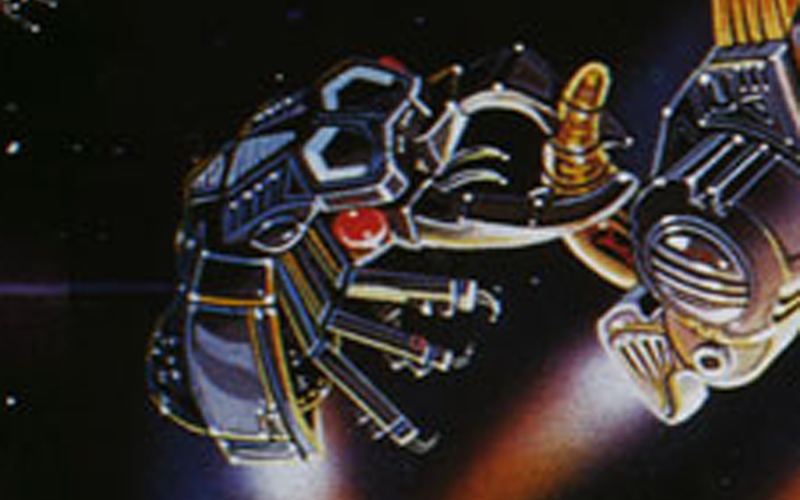 In another twist, all of the various examples of Deluxe Insecticons that can be found here are sporting their Armored Insect Battalion Beetras colour schemes from before they were licensed to Hasbro for inclusion in Transformers (read more about that here!). We’ve also seen these pre-TF paint jobs popping up in catalogues from the time, so them being on the box artwork as well is no great surprise. 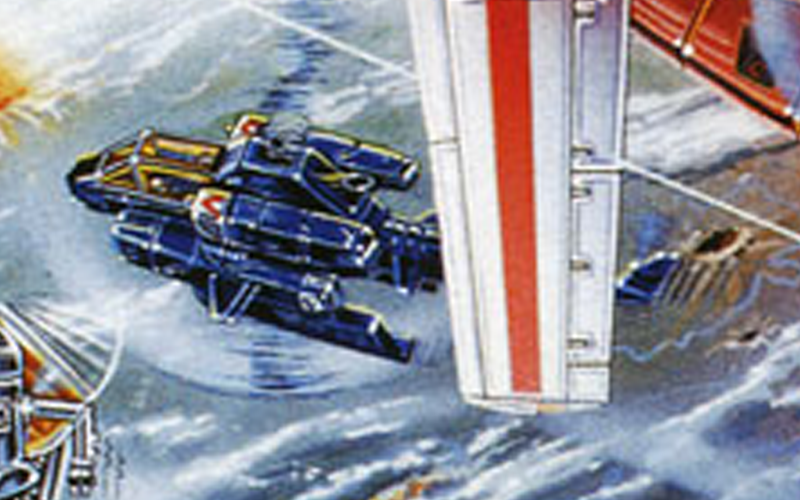 Lo and behold, you can also find Whirl here in helicopter mode, yet again he’s sporting the darker blue colour scheme found on the pre-TF Ovelon Gazette toy from Takatoku’s Special Armored Battalion Dorvack line. In fact between this guy, the Deluxe Insecticons and Jetfire, it’s a bit of a Takatoku tale all over! 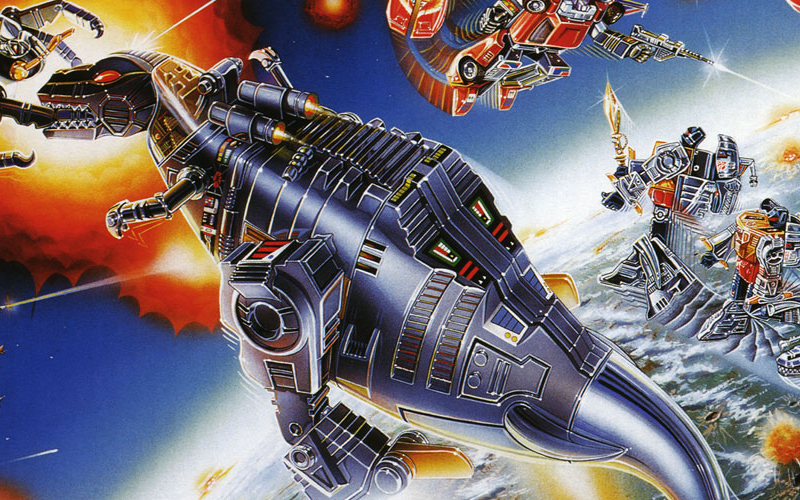 It’s not uncommon for characters to pop up multiple times on these back-of-the-box paintings, but Grimlock is one of the more prolific examples, as he appears at least three times in the 1985 example! One of these is a very impressive transformation sequence, another is in his dino mode (where you can see he’s using the joints on the toy’s back as thrusters, in a neat move!) and the third is in the top corner with some of the other Dinobots. Him Grimlock everywhere!

#13: Sludge appears to have a mouthplate 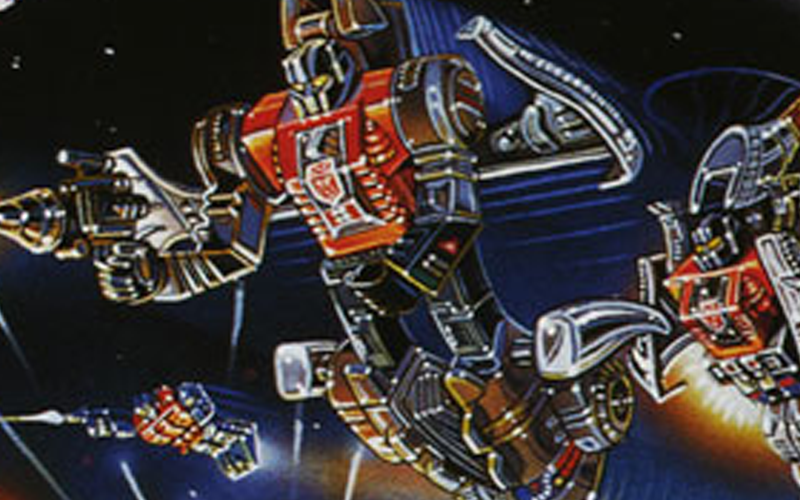 OK this one could just be because it’s hard to make out, but is that Sludge rocking a mouthplate there, or is it just me?

#12: And does Snarl have his pre-TF colour scheme too? 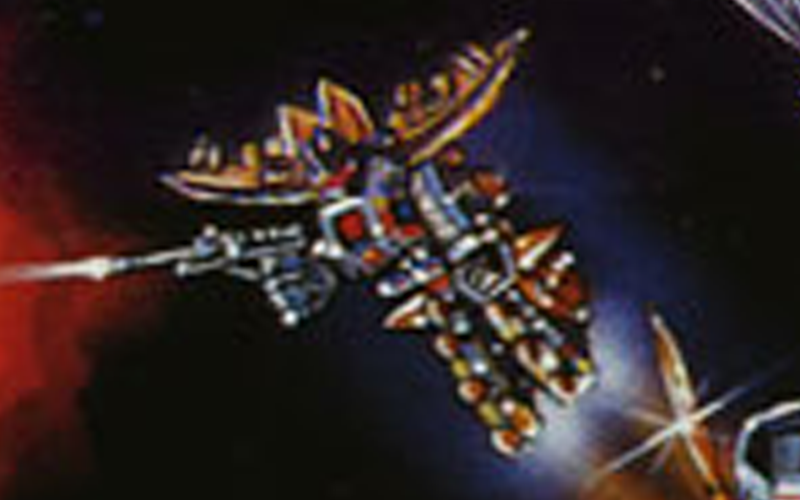 Equally it’s quite small and hard to tell, but this is clearly Snarl in the top-right corner, but he appears to not have his traditional red and grey look. Again, I could be wrong or it might just be how it’s painted, but it almost resembles his black Diaclone colour scheme, somehow. 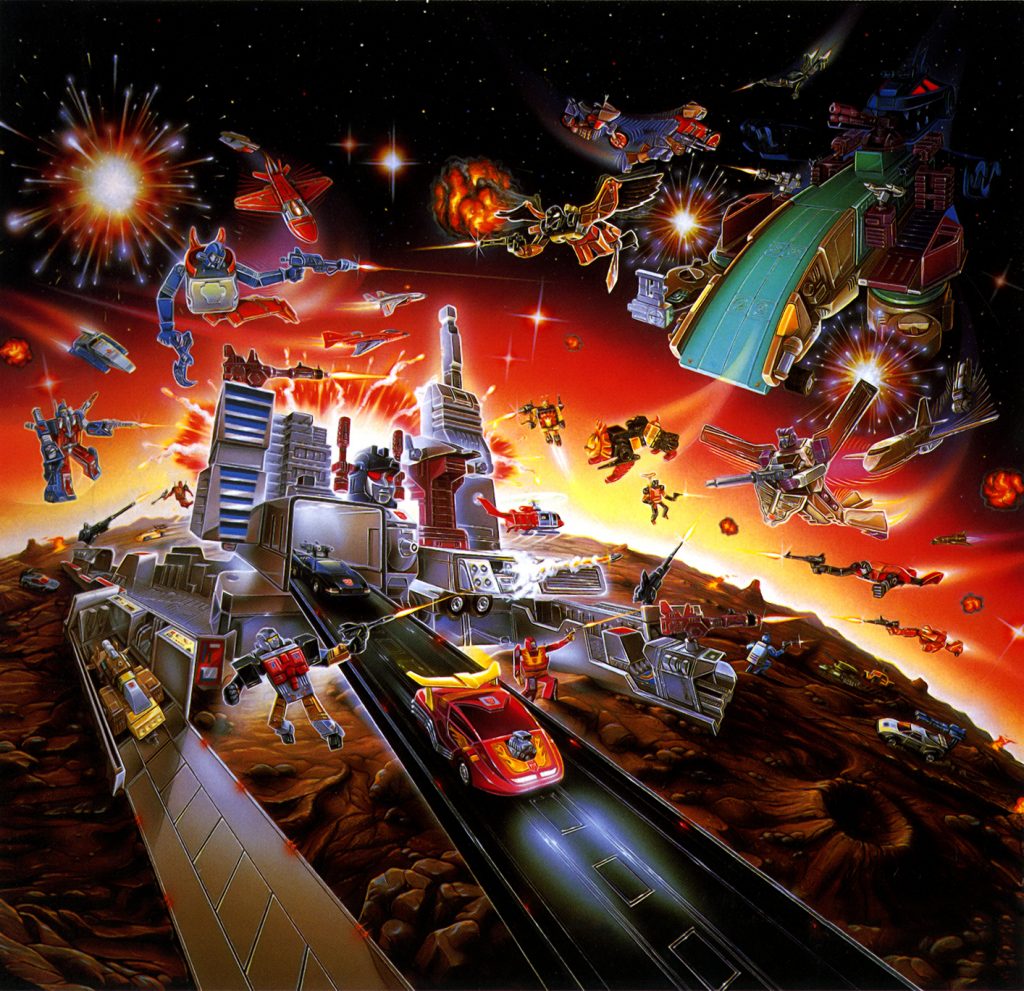 On a personal level, the 1986 artwork is one of the more memorable examples from the first five years of Transformers. That’s perhaps because it was one of the most widely-used (even on account of how many toys there were in the 1986 range), but also it’s the one that created the most questions for me, as a child – all of which we’ll cover below! The 1986 artwork was again done by Jeffrey Mangiat, after his 1985 example had presumably been popular.

Wow, this one caused me a lot of confusion as a kid! By now, it’s relatively common knowledge that Broadside had two distinct looks in Generation 1, including a design much more akin to his actual toy and then the one above, which was also featured in the Marvel UK comic and in the one episode of the cartoon, Carnage in C-Minor (yes, that one). This alternative design was based off a prototype of Broadside that looked distinctly different to his eventual retail release, although given the prototype also made it into toy cataglogues at the time, perhaps it’s no shock to see it represented on the back-of-the-box artwork as well. 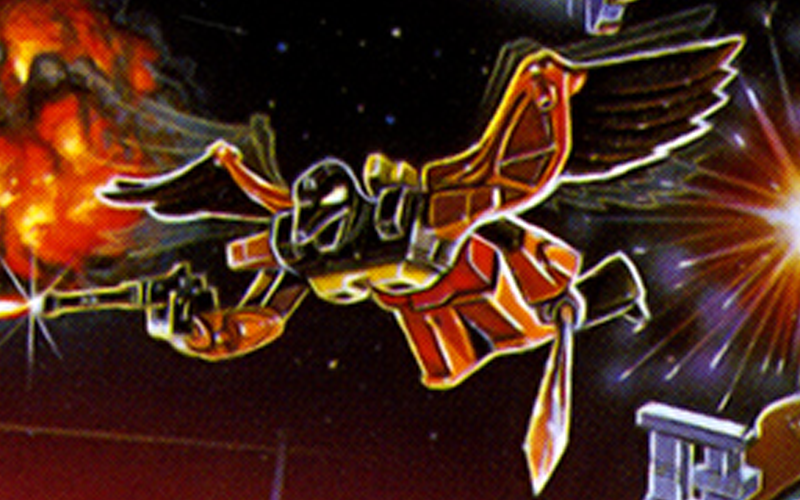 Here’s Divebomb, sporting a bit of an in-between-modes-look for the ages. One can only assume that the artist didn’t clock the robot mode face inside the bird’s head, or this was an attempt to show him mid-transformation. Either way, it’s a strange one! 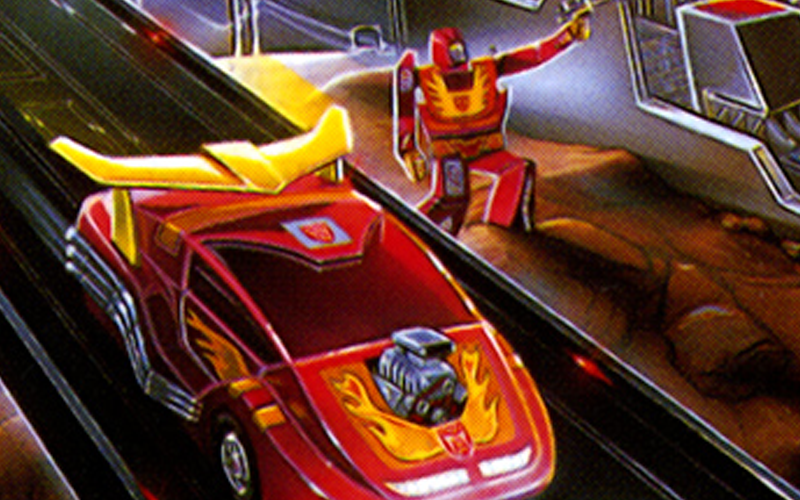 Of all the many examples of multiple versions of the same character appearing in these artwork examples, this was the one that raised more questions than any, for me. Hot Rod can be seen at least three times in the 1986 artwork, including in both his robot and car modes. You have to ponder what the idea behind reusing the same toys over and over was, but it doesn’t exactly fit with the established franchise fiction at this time. 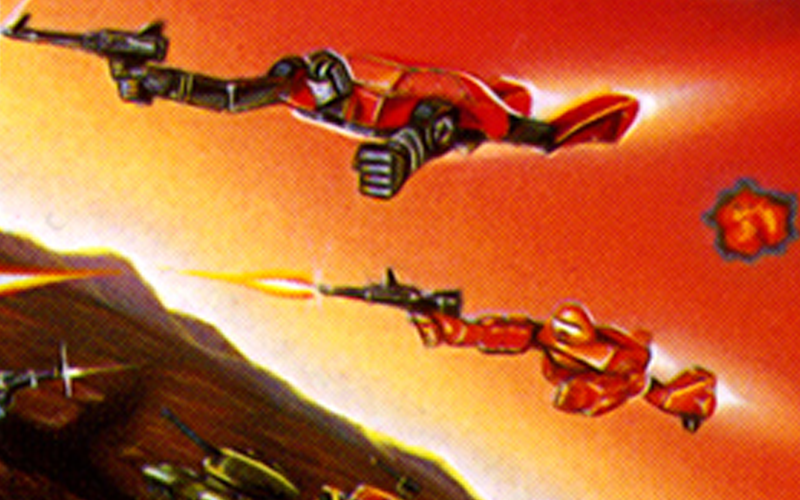 1986 is another great example of random ‘bots popping up who don’t quite look like any toy in the range, and perhaps the most notable example is these two. It certainly seems like the top one is meant to be Dead End, and presumably the bottom one is Rampage, but neither of them look particularly like those examples either.

#6: Sandstorm, blowing in my head 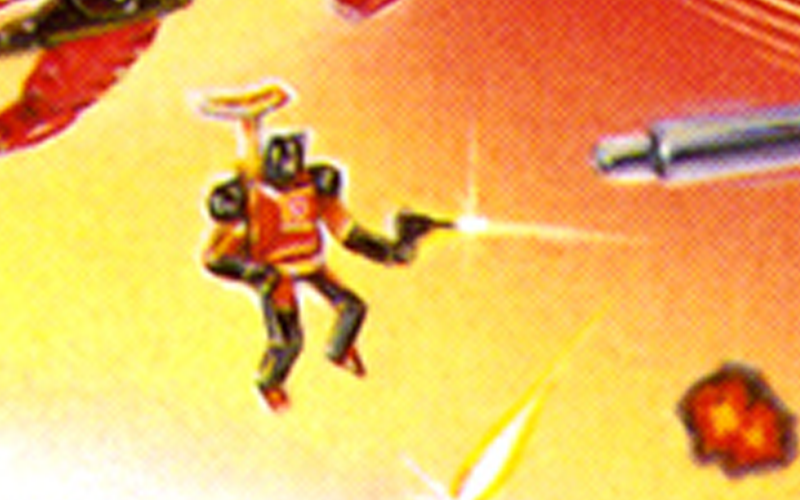 Here’s another example of a random trooper who’s hard to identify. As a kid I always assumed this was Sandstorm, but even looking at it now it’s not exactly conclusive when you match up the details against the toy.

If you’ve never followed the #TFBoxArtChampionship on Twitter then you may not have clocked all of the many mean things people had to say about Ultra Magnus’ 1986 character artwork, and to be fair, it’s really not the best. Yet that awkward pose is recreated quite faithfully here, on the back of the box as well. Joy! 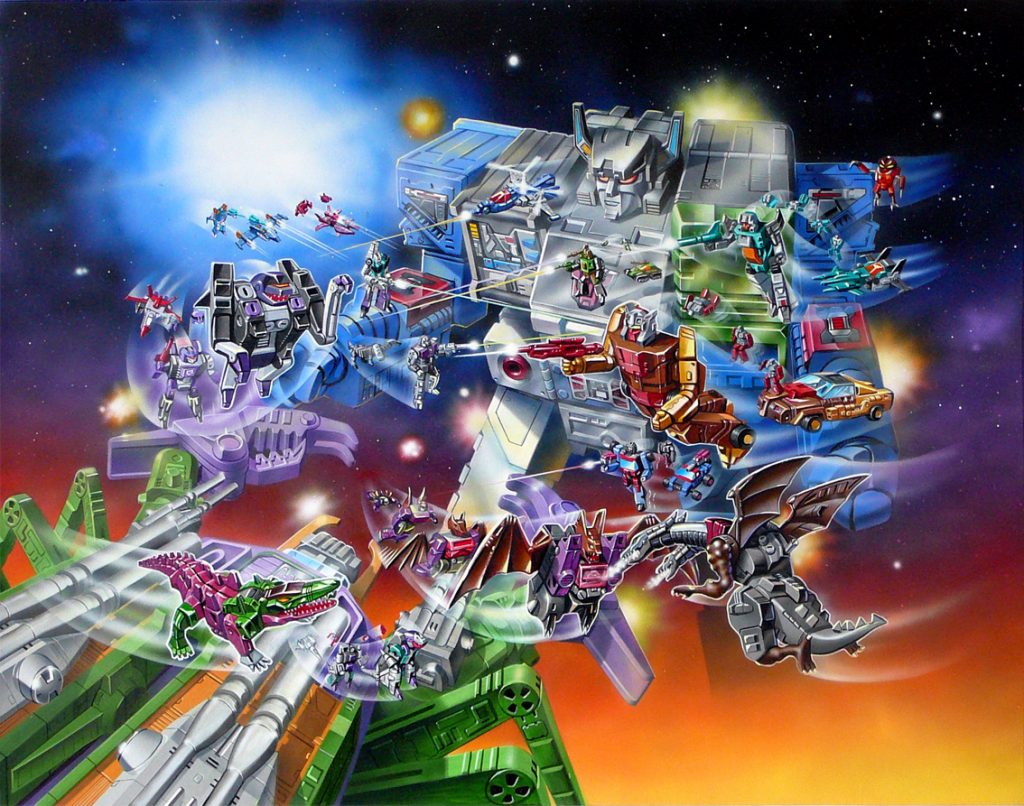 Fortress Maximus was the biggest Transformers toy ever seen when it was first released in 1987 (and even today, it’s still pretty huge!). Although he wasn’t far off being the size of a regular ‘bot in the comic, the cartoon did depict him in true titanic status in the very last episode, where he dwarfed the rest of the Transformers on Cybertron in a battle with Scorponok. Really though, I don’t believe any depiction of the character has ever truly captured him in such massive majesty as the back-of-the-box artwork seen in 1987. The sheer scale represented here is just breathtaking, and certainly caught the imagination of children at the time!

#3: The characters look a lot more like their toys here 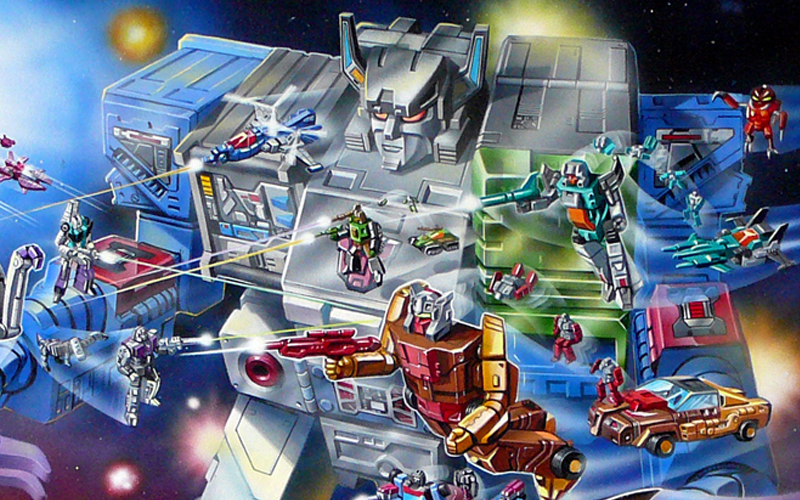 The only other real thing to note about 1987 is how much closer to their toy counterparts the characters have now become. Gone are the random depictions and “who’s that guy?” ponderings from the first three years, leaving a much more established (and, dare I say, cartoon-esque) appearance for the robots altogether. This no doubt reflects the shift in aesthetic for the toys themselves at the time, too, as the line well-and-truly moved past the days of Diaclone hand-me-downs. 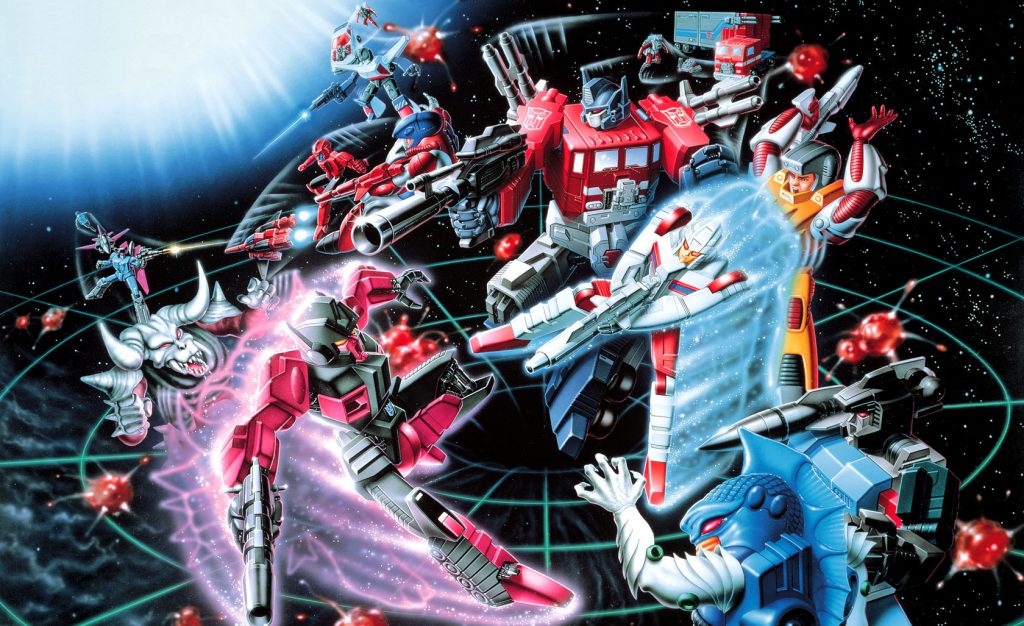 Many people will cite this 1988 artwork as a favourite and, let’s be fair, it’s not at all hard to see why! The action is exciting, the artwork is crisp, the characters are nicely-realised and it all just looks superb! The fact that this art was used so prolifically on Transformers merchandise from the time, including VHS covers, t-shirts, lunchboxes etc. no doubt added to how much it managed to stay in the minds of 1980s children.

#1: The return of Optimus Prime! 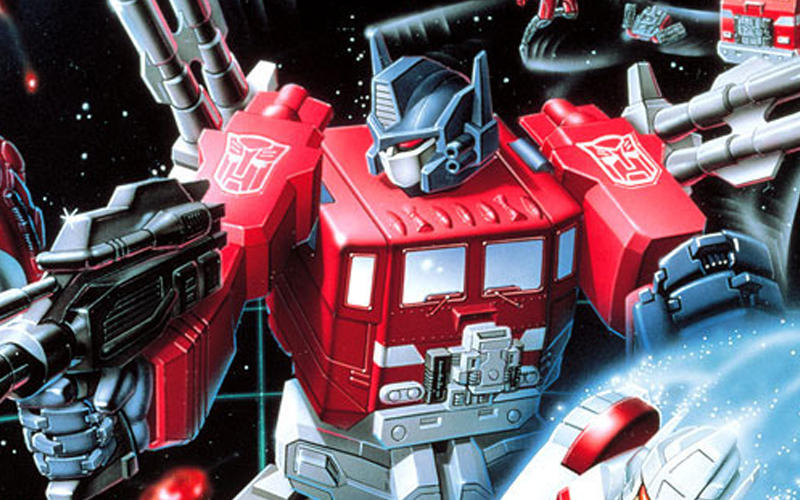 Of course this artwork is most well-known for one thing – depicting Optimus Prime in his new Powermaster form! In fact it’s one of the best representations of the iconic Autobot leader in his souped-up bod that you’ll find, and arguably does an even-better job than the character’s own front-of-the-box depiction at bringing him to life. Many adult fans will recall that they then used this artwork on the front of the VHS release for the classic cartoon caper, The Return of Optimus Prime, which, as the title suggests, featured the long-awaited reappearance of the character following his infamous death in the 1986 movie. The fact that Optimus returns in his original form in the cartoon and *not* his Powermaster guise was not lost on children at the time, let me assure you!

So that’s our list. Are there any other observations to be had about these original pieces of artwork?