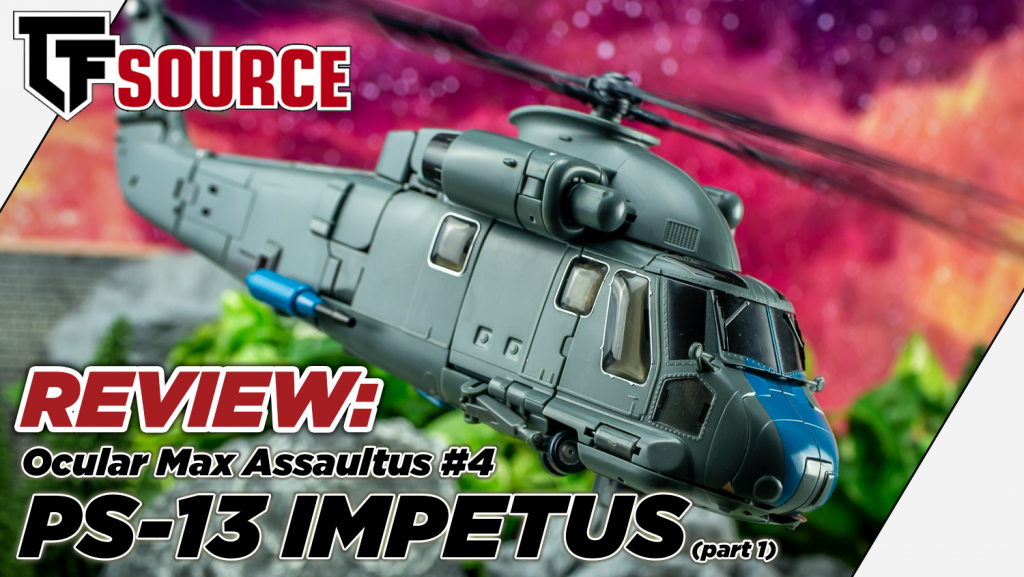 In case I haven’t mentioned it recently, I’ve been really enjoying those new Ocular Max Combaticons. Oh, I may have said something? Well, forgive me, as we’re not done yet, and especially not when they make such a first impression as Impetus here! 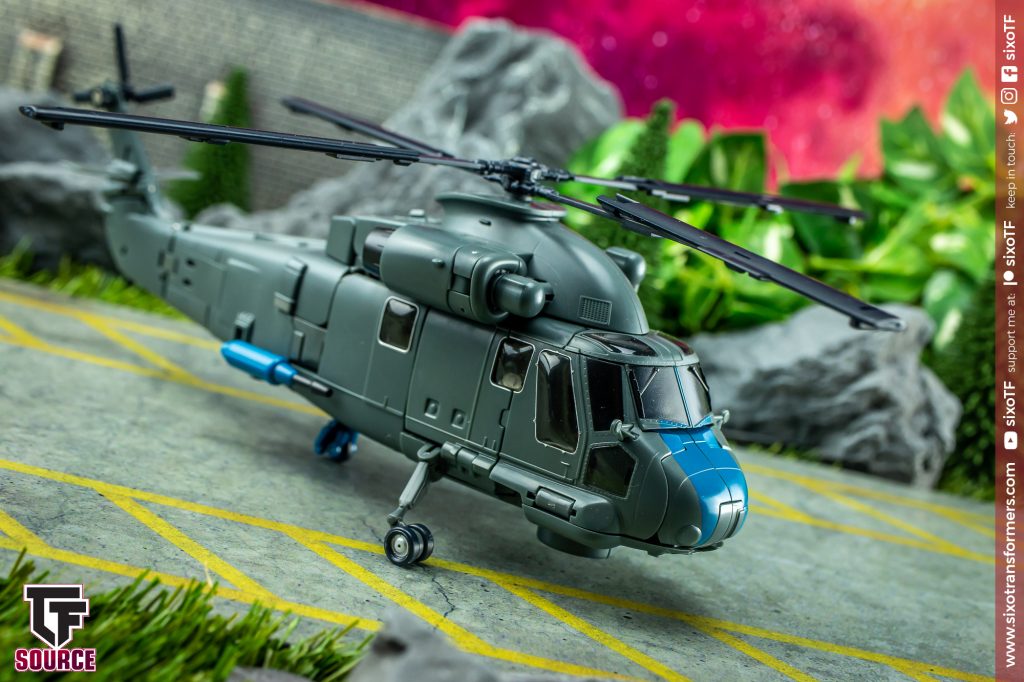 Yes, having already taken a look at land-based team members, Incursus, Fraudo and Probus, now it’s time to turn our attention to the more air-faring portion of the troupe, starting with the unmistakable blue and grey helicopter. 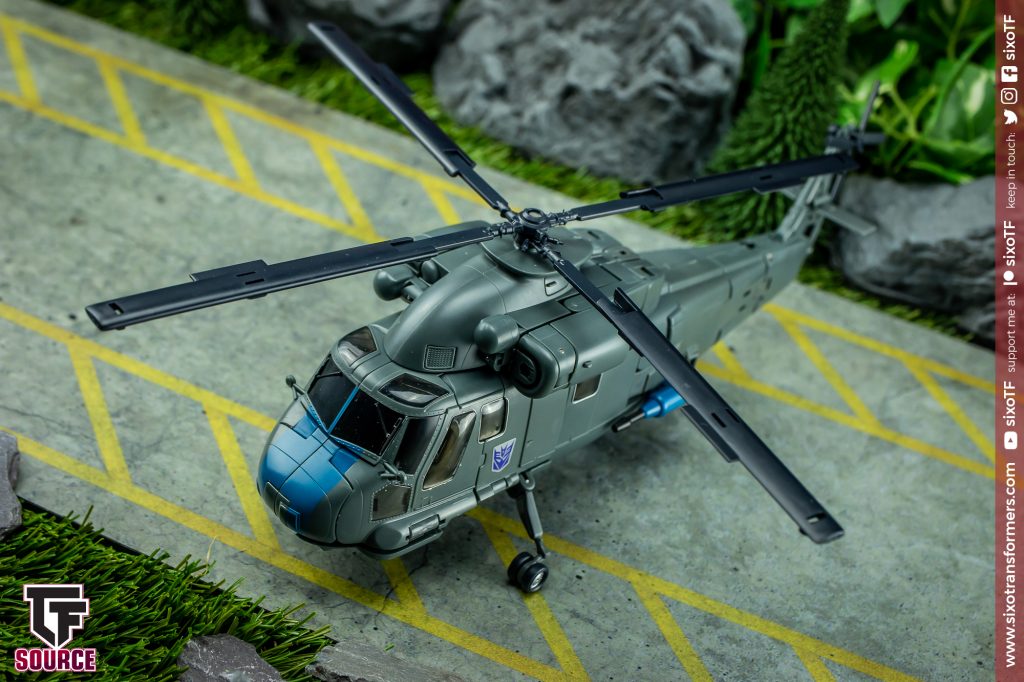 After all, ‘copter-formers are always good for a giggle, right? There’s often some inherent play value to be found, and they at least make for a bit of a change from the usual sea of Lamborghinis and other such vehicular alternate forms. As it turns out, Impetus is not only no different, but he’s practically best-in-show. 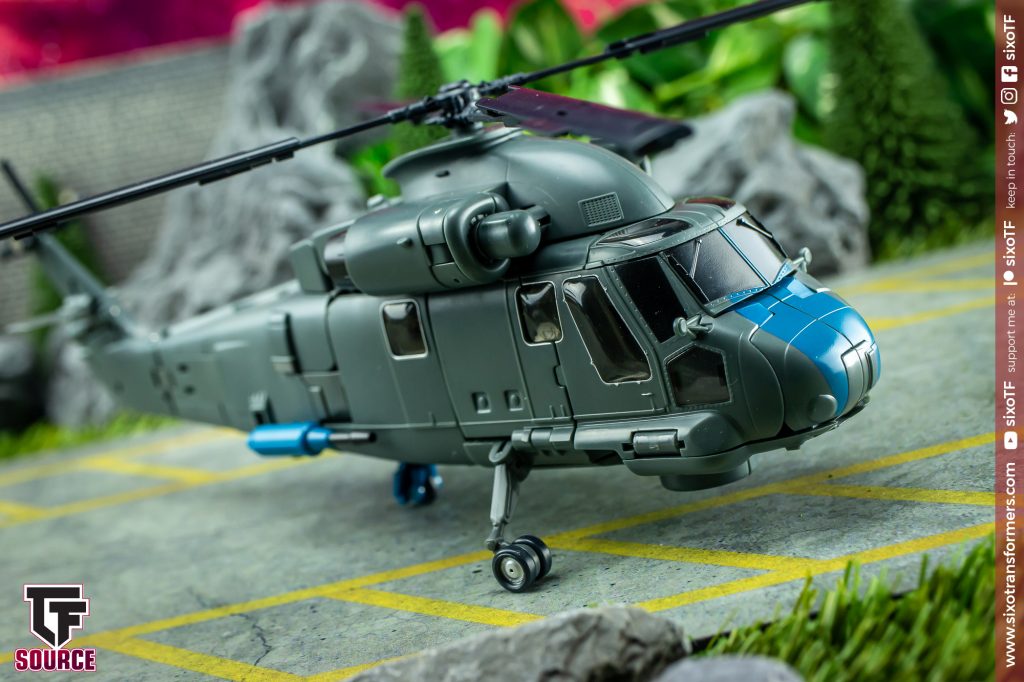 I say that without a smatter of hyperbole as honestly, this thing just looks gorgeous. From the moment it pops out of the box, it’s easy to be impressed not just by the overall shape and proportions, but also the polished finish and intricate detailing on offer. He looks marvellous! 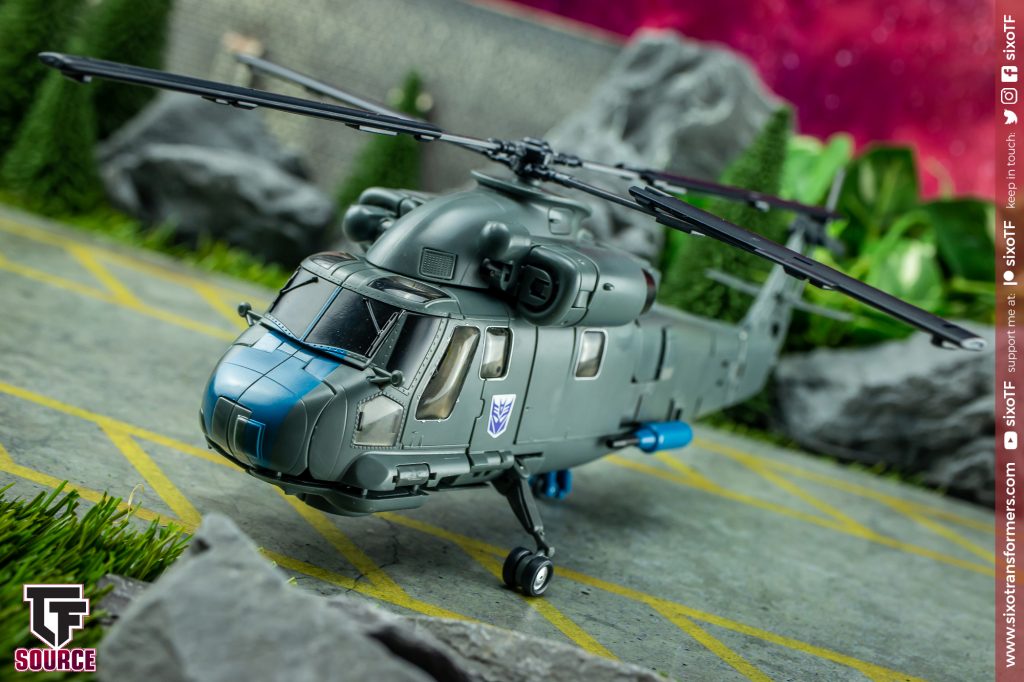 Confession time, then – I know virtually nothing about real-world helicopters (as I’m sure was quite evident more than once during my recent Unboxing video on this chap), but to my eye at least this feels suitably realistic in how it approaches bringing such a thing to life in toy-form. Certainly more so than a lot of its competitors in the world of Masterpiece-styled choppers, anyhow. 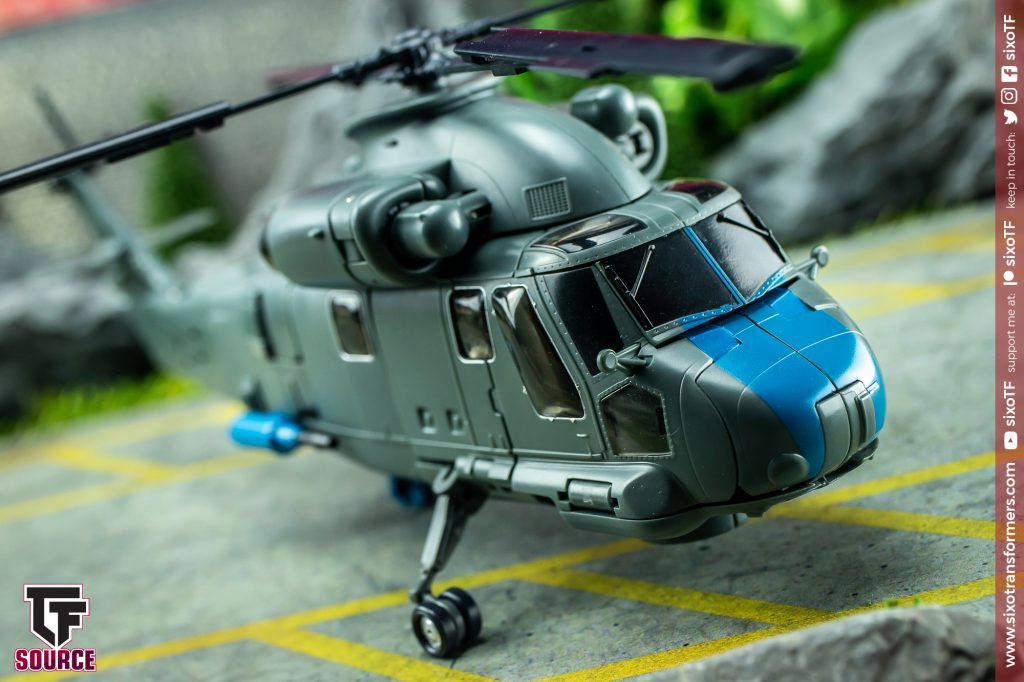 For one thing, it’s loaded with little flourishes that make you feel like there’s a distinct attention-to-detail at play here, including all kinds of tiny mirrors, wipers, panels, doors and whatever else one might imagine a real helicopter to be packing. 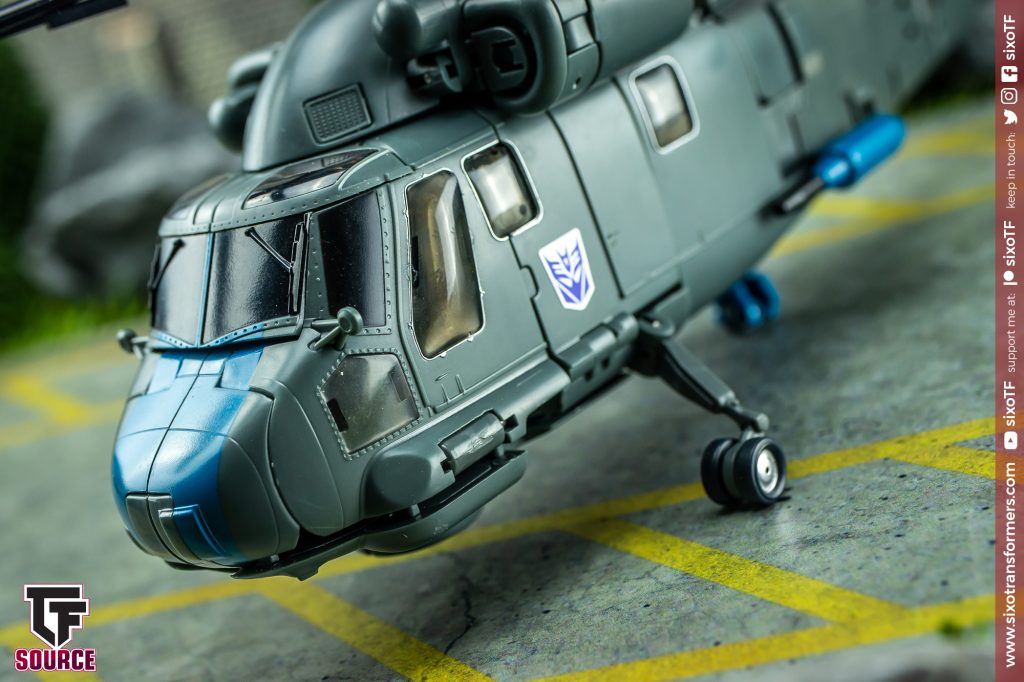 I’m a particular fan of the minuscule moulding around the edges of the windows, not to mention the exceptionally small-scale silver trim. Coupled with the excellent use of translucent plastic sections for the windows themselves, it all adds up to a real feast for the eyes. The front windshield is painted, on account of how this piece needs to contort for transformation, but still it manages to blend surprisingly well with the rest, making for a strong look overall. 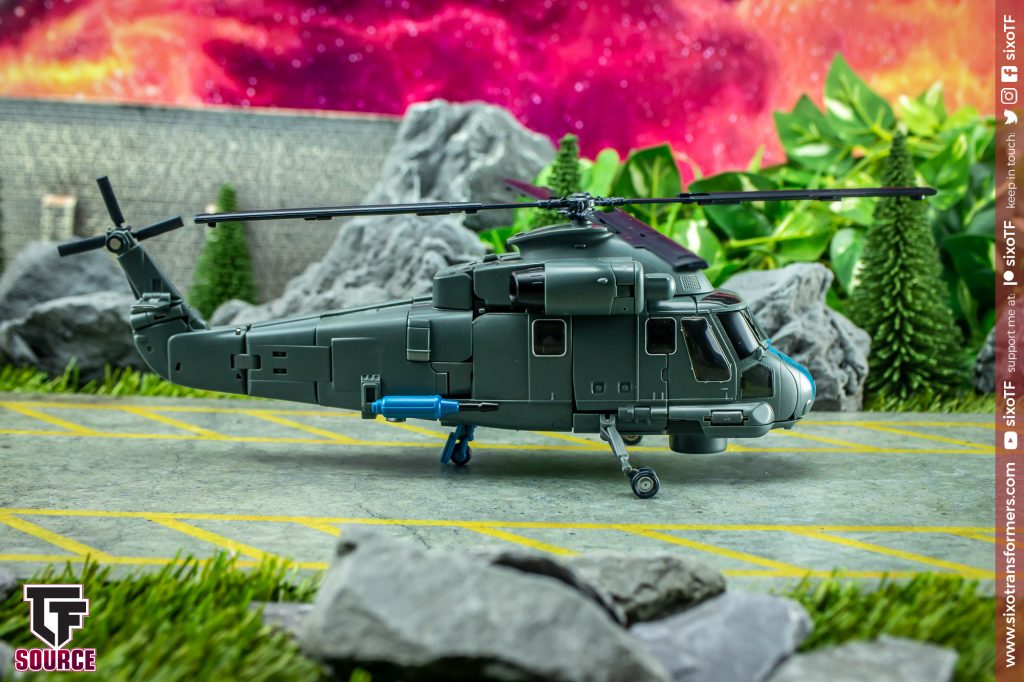 It’s not just an up-close examination that bears fruit, however, as standing back to admire Impetus from afar merely shows you what a wonderful job Ocular Max have done here. There’s a lot to look at, but it comes together very nicely as a package overall. 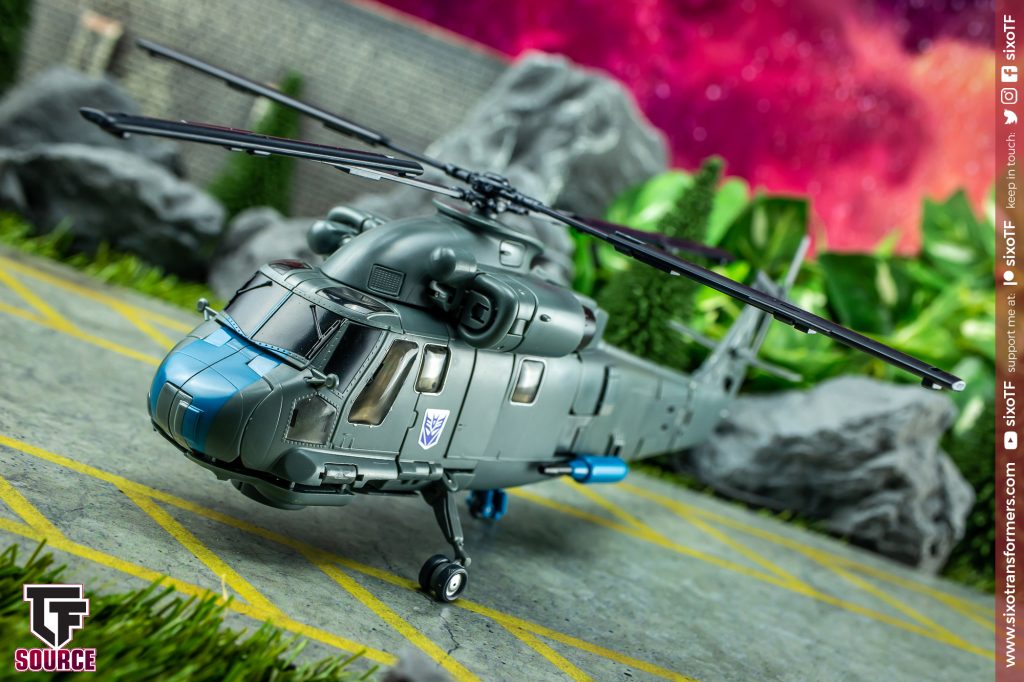 Aside from any real-world trappings, it’s also a great approximation of Vortex’s animation model, despite arguably being a little more grounded somehow. It lacks the somewhat “squished” proportions from the cartoon, but I think if anything looks all the better for it! You can also add the toy’s handheld blaster onto his nose section should you wish, although in truth I don’t care for it much as it looks cumbersome and doesn’t stay in place particularly well, so I’d rather go without. 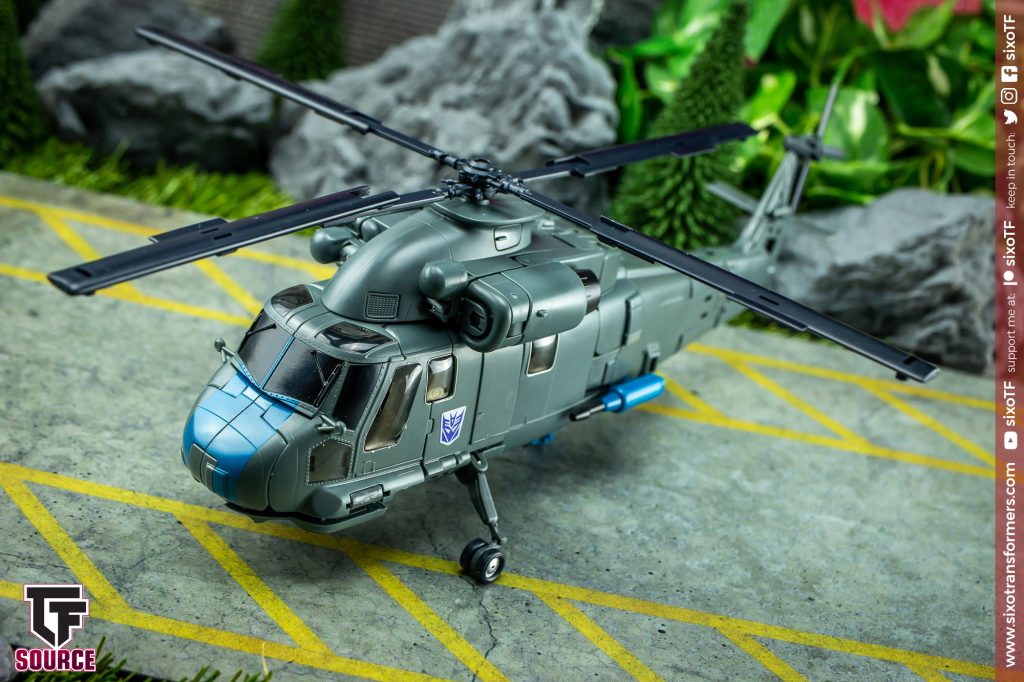 What is worth noting is how tidy everything is here, too. There’s nary a whiff of robot mode kibble to be found anywhere, no matter where you look, as everything comes off as surprisingly clean and sturdy in ‘copter form. 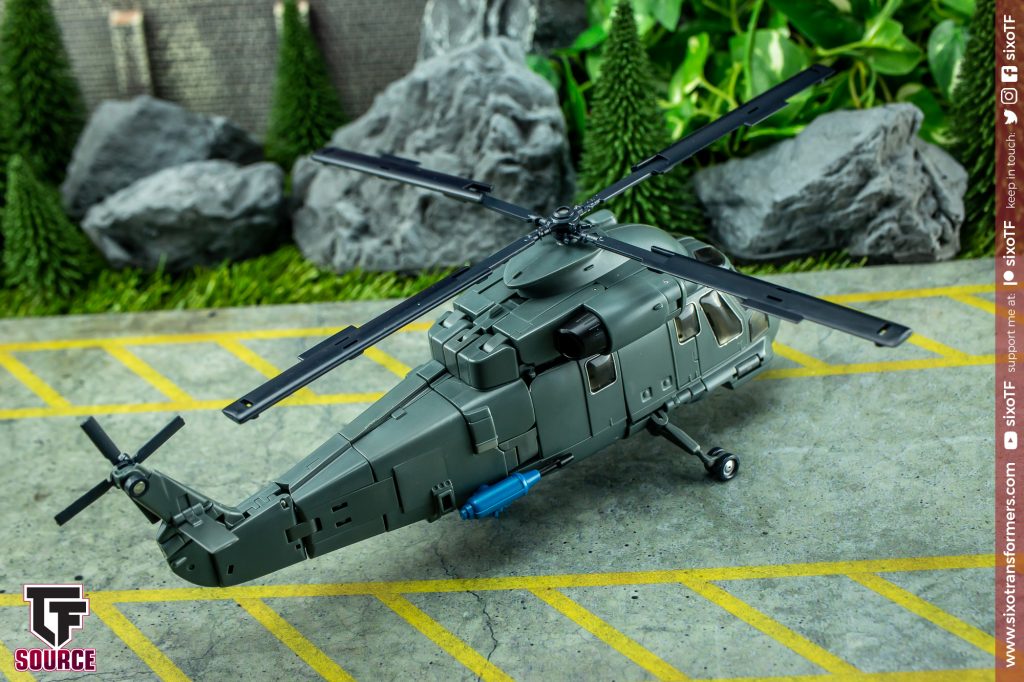 That’s even true from a rear view, with perhaps the only evidence of transformation being some fairly obvious panels here and there. If you were to turn him upside down then there are a few gaps that give the game away, but even then it’s really quite well done on the whole. 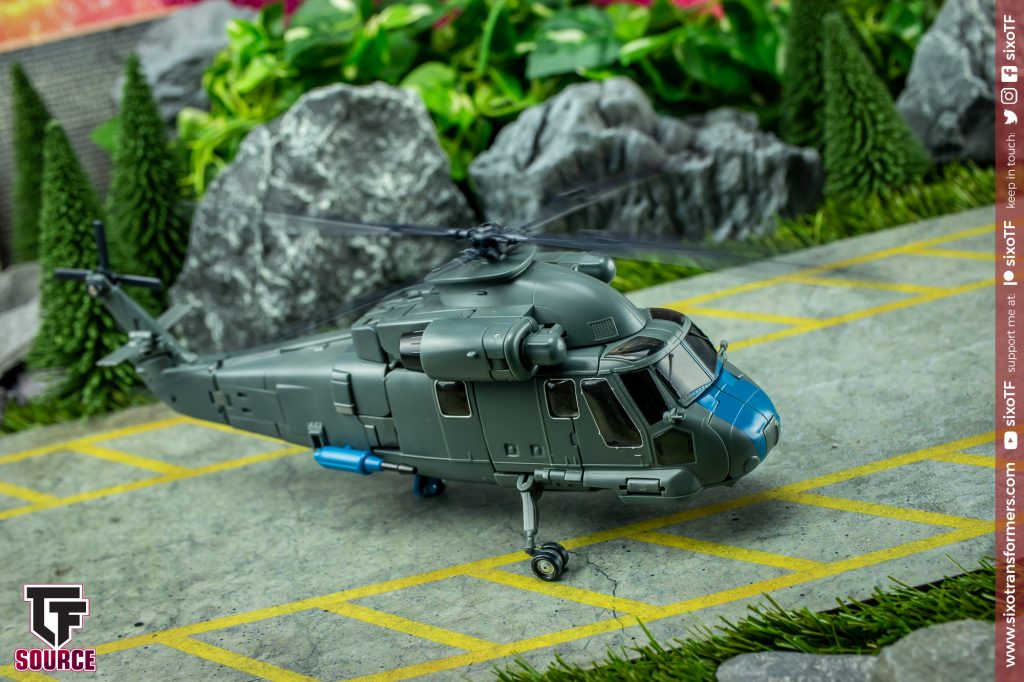 So, Impetus definitely has the look down, but how much fun is he? After all, one thing that any decent copter-former needs to do well is spinning rotor blades, surely? Well, this sadly isn’t the smoothest, as the blades tend to not spin all that freely, even on multiple attempts. They’ll go if you give them a decent-enough push, but often end up being impeded by friction and stopping quite suddenly. 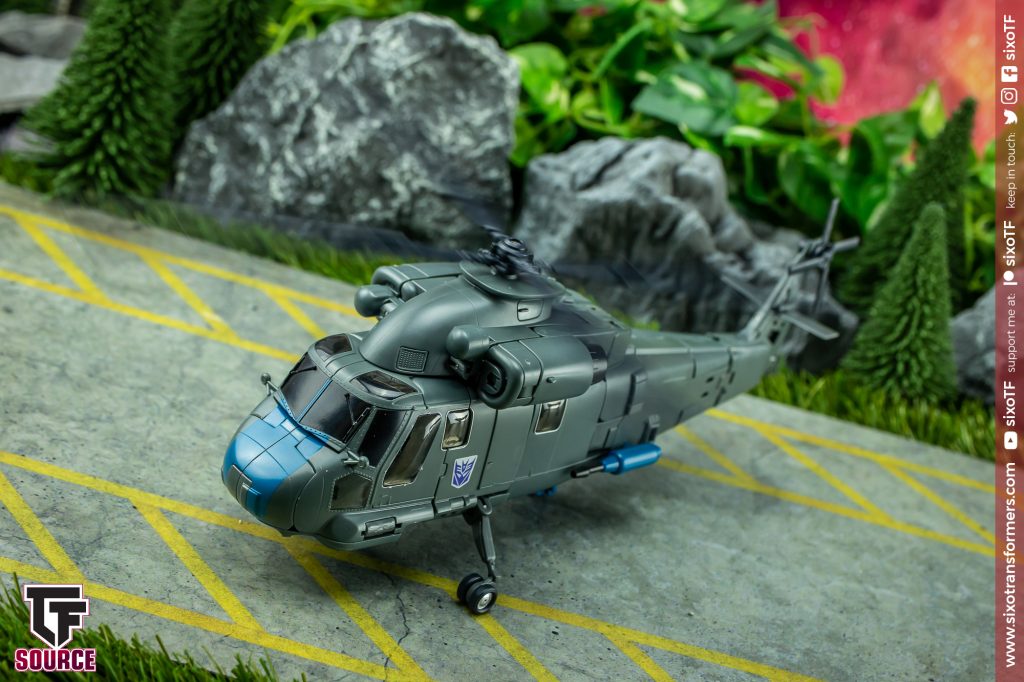 The small blades on the tail section also feel a bit duff, and don’t really peg together very securely on my copy. In fact I would advise being a little cautious with both sets of blades on the whole, as they’re not made of the thickest plastic and I suspect could be damaged if you’re not at least a little careful with this guy during play. 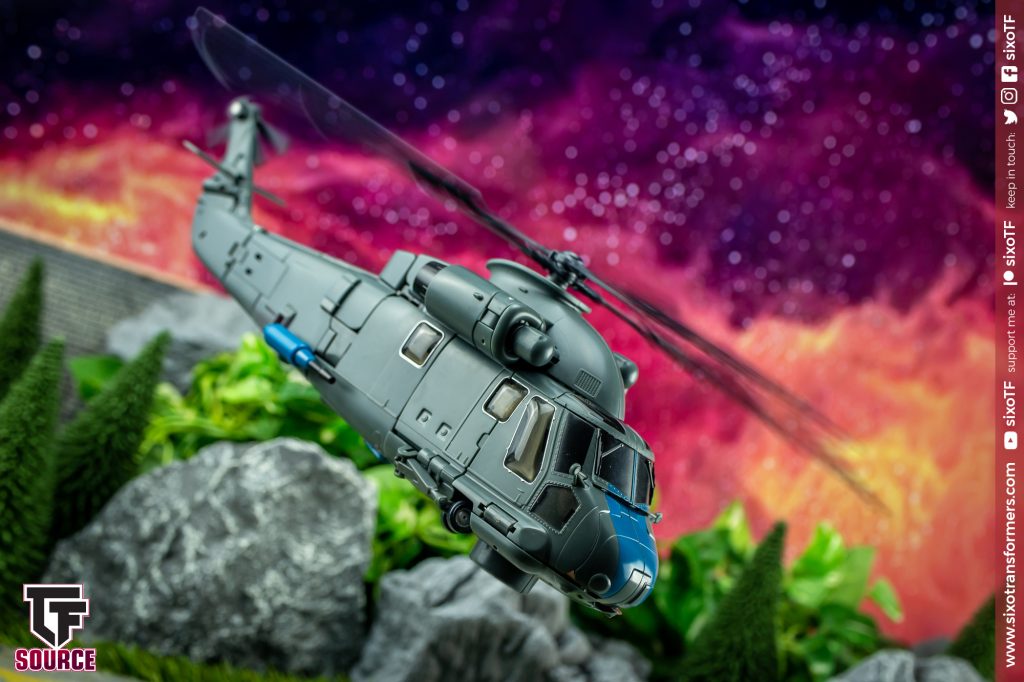 Still, there is some fun to be had here, and once you pop up the landing gear he looks simply sensational posed on a flight stand as if in mid-flight. 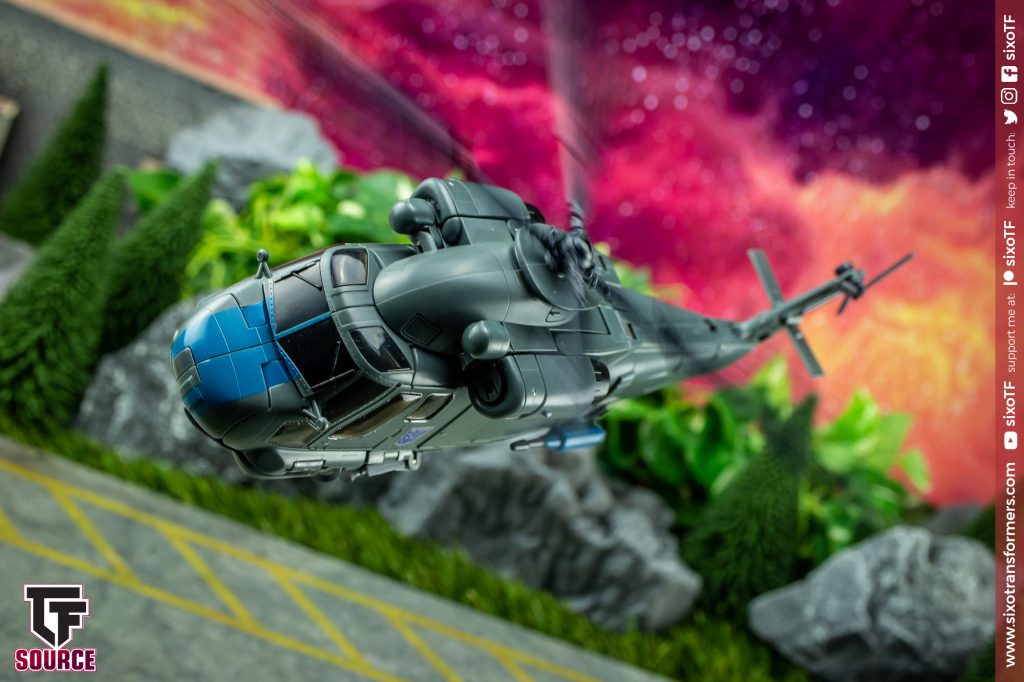 Ultimately I think that Impetus does such a great job at bringing the intended character to life than I am willing to forgive stuff like some slightly-sticky blades! As I said, it’s also one of the best-looking helicopter modes I’ve seen in Masterpiece-style, hands-down. 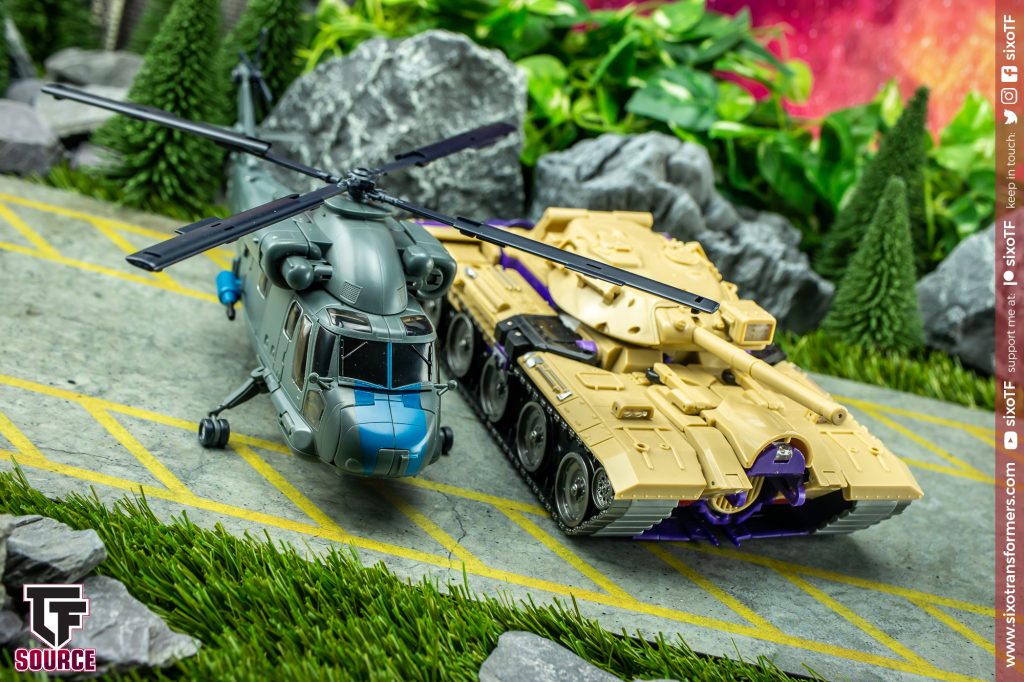 Not that there’s much in the way of competition, mind, but that doesn’t take anything away from Impetus. Besides, he looks just as good with an array of other vehicles! 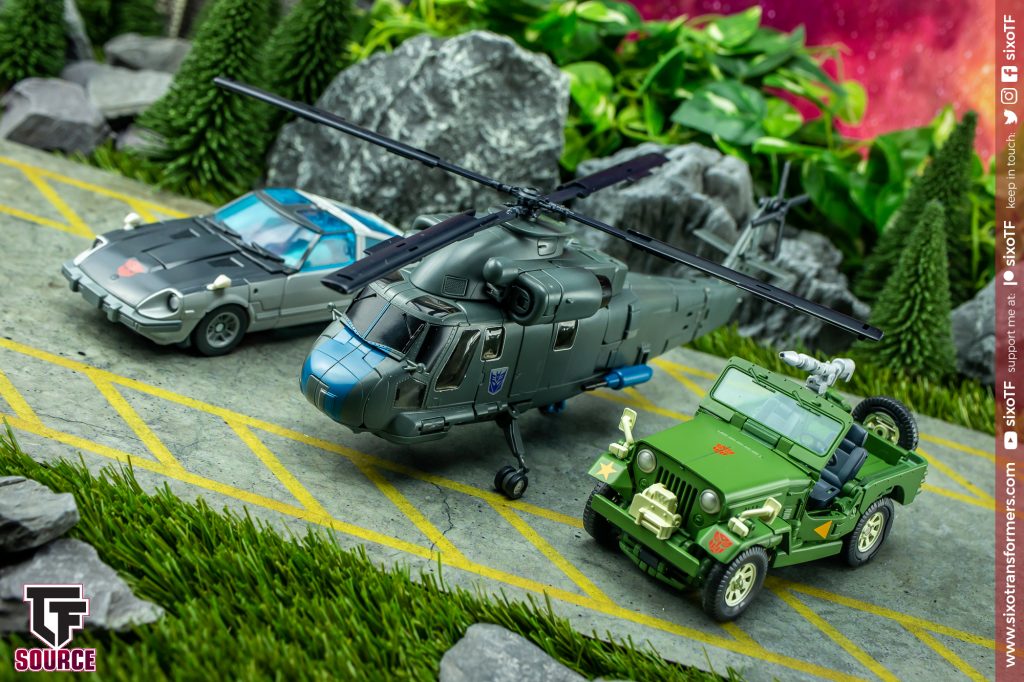 Looking at him next to the likes of the Masterpiece Carbots, the topic of scale will surely rear its head, although in reality it’s not something that will ever really be a proper consideration for toys like this. 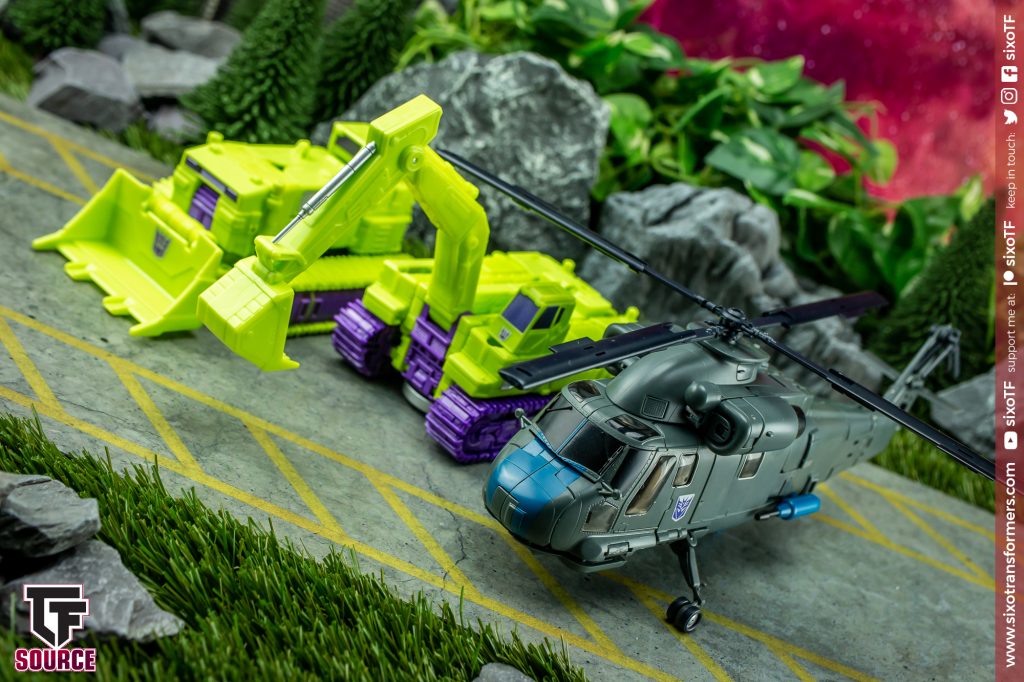 After all, there’s no conceivable way to have these various vehicles all scaling properly with one another and then have them lining up to be the proper character height in robot mode, so it’s best to just go with it and appreciate them for what they are! 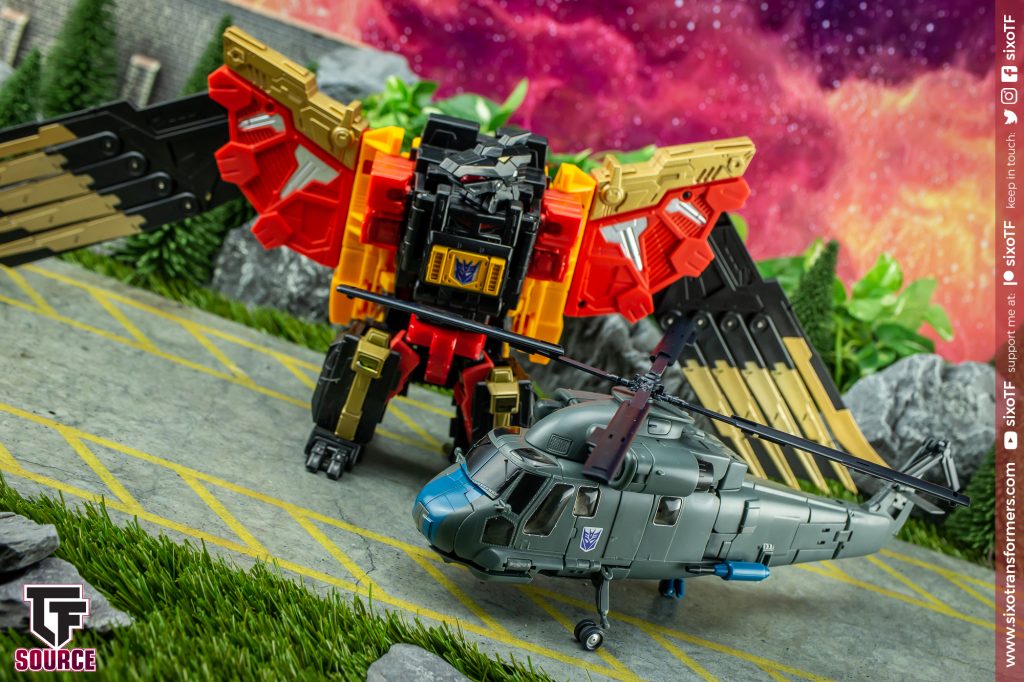 On that basis, it’s fair to say that Impetus works very well indeed, and ably holds his own against any number of Decepticons – many of whom he shared screentime with. 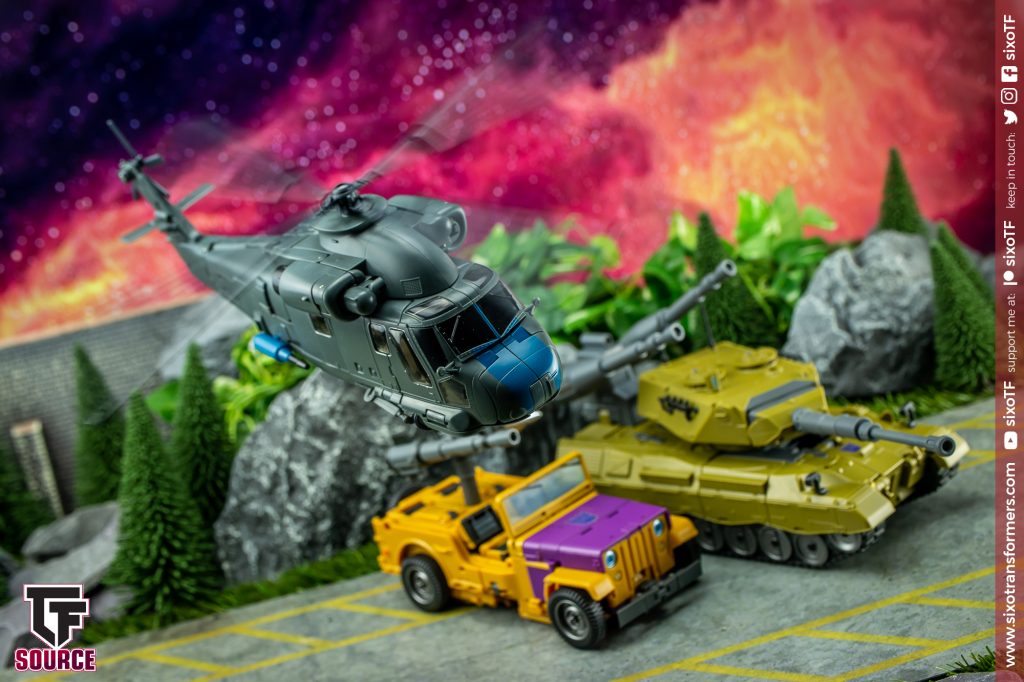 Naturally he feels right at home with the rest of the Ocular Max Combaticons though, fitting in superbly well to the team and bringing a much-needed dash of airborne antics. 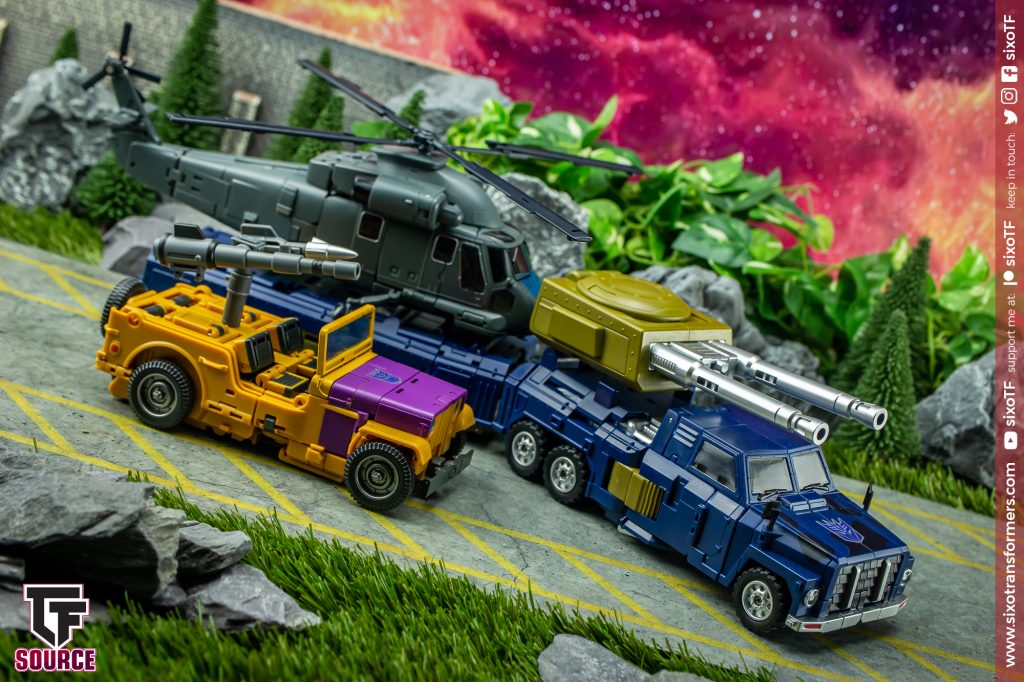 He even does a great job at sitting atop Incursus’ rear-bed section, and fits much better than Volatus’ larger space shuttle mode. 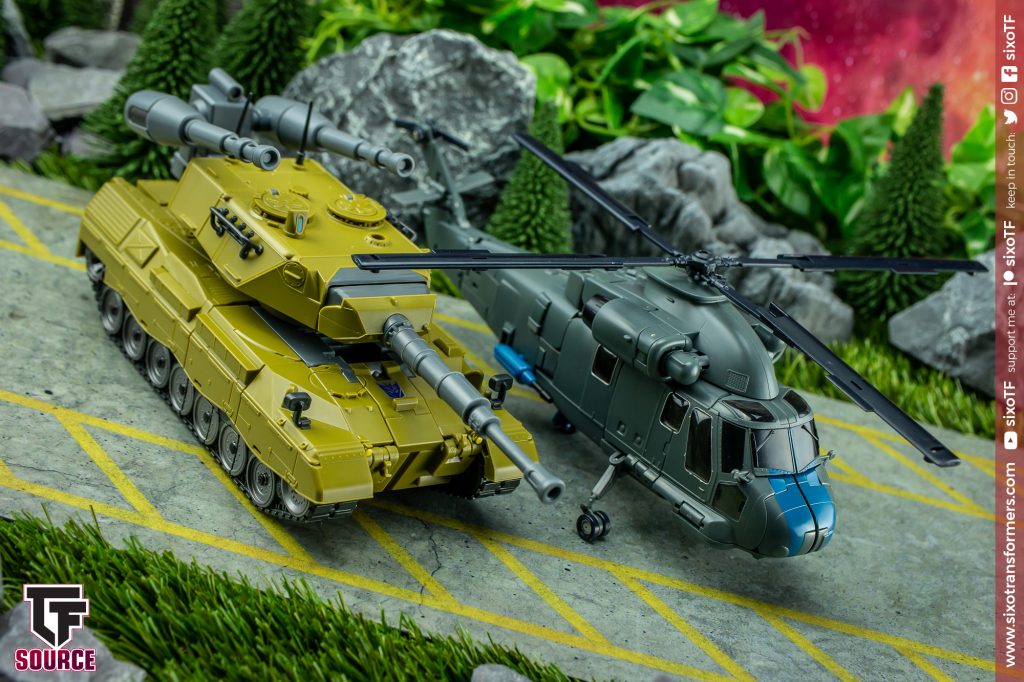 In terms of style, I think he probably matches best with Probus somehow, as they both have that similar mix of real-world aesthetic and cartoony-homage that works so well to my eye. 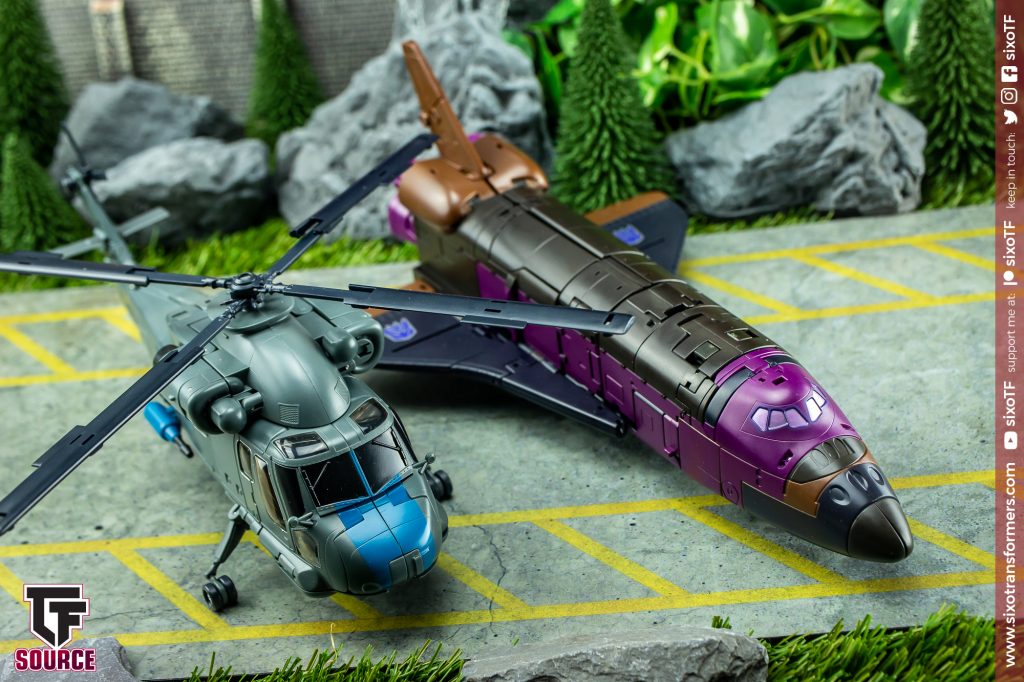 Not that he doesn’t do a great job with the rest of the bunch too, as ultimately it’s a joy to behold all of these toys coming together as one unit and representing the Combaticons as well as they do. 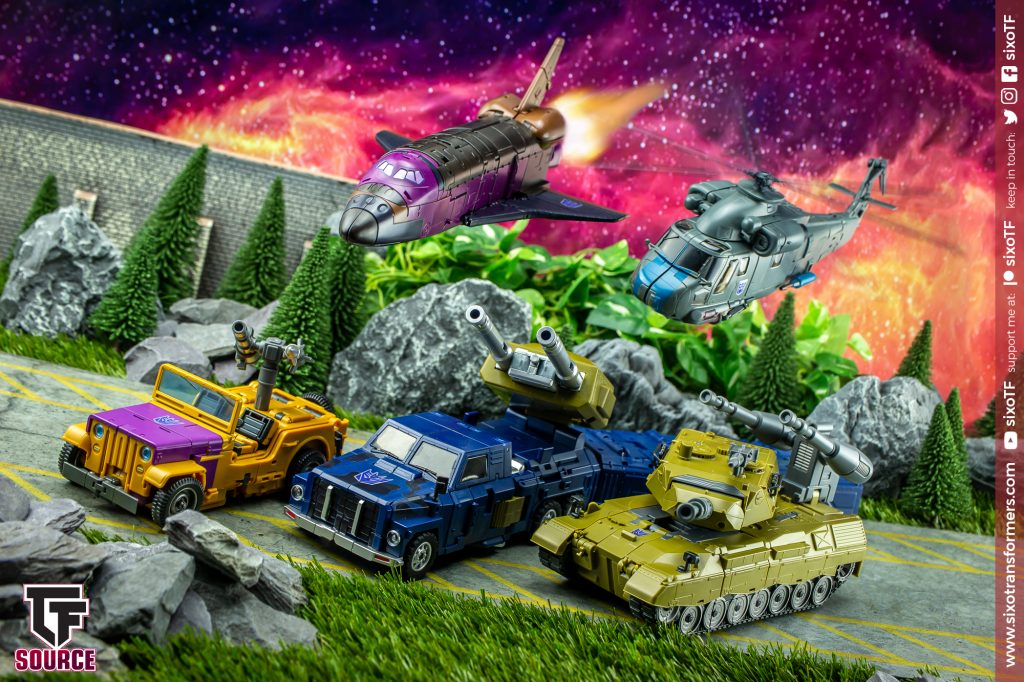 In many ways, the two aerial additions to the team were always going to be the hardest ones to realise, but at least based on Impetus I’d say that Ocular Max have smashed it so far! I’ve thoroughly enjoyed taking him for a spin. 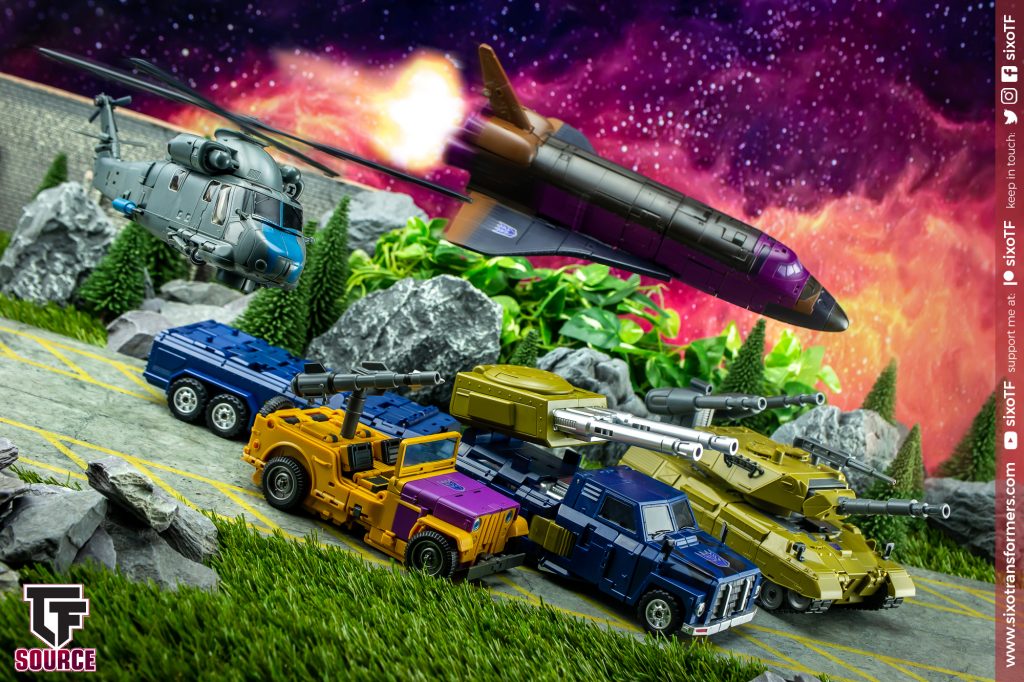 Join us for the next part when we’ll be taking a look at the final member of the team!