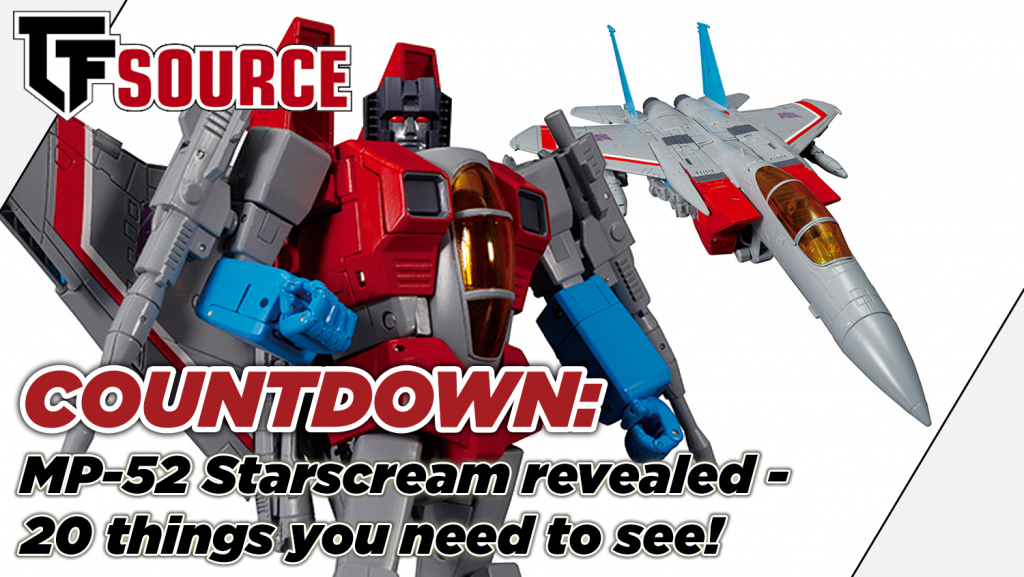 When the idea of a new Masterpiece Seeker mould was first rumoured, it’s fair to say that the idea went down with some about as well as a bad case of GPS. After all, do we really need another rendition of this character, when there are so many other possibilities still to be given the MP treatment? Well, the full product photos of the final toy have just arrived this week and it turns out that yes, we definitely do need such a thing after all, especially when it looks as good as this!

Deploy *SHUT UP AND TAKE MY MONEY* meme. pic.twitter.com/d6drd7p7fN

Personally, I can’t wait, as it looks to be absolutely loaded with gimmicks and nods to the original animation. So today, we’re counting down 20 aspects of the new MP-52 that are worth screaming about!

#20: He’s the most cartoon-accurate Seeker toy to date 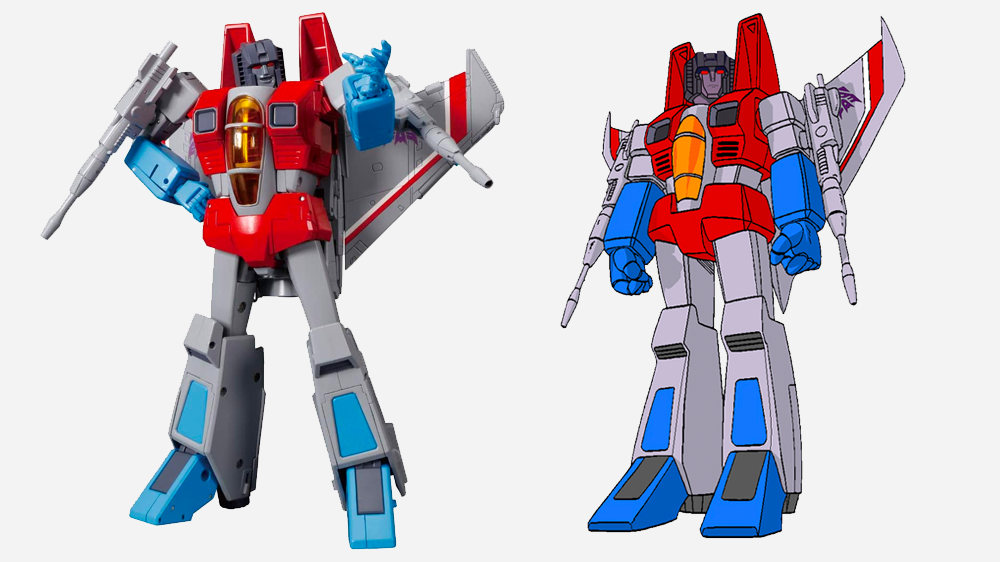 And yes, we mean that of any Seeker toy from any line, not just Masterpiece. I’m always a bit loathed to say that something looks like it “stepped off the screen” or whatever, but that phrase certainly applies here, as Starscream has been recreated to the tiniest detail! Note the upside-down Decepticon logos on the wings, the shape and curvature of the legs and hips, the way the intake sections sit on either side of his head… everything looks flawlessly done. The proportions are especially spot on, and bring the cartoon interpretation of the notorious traitor to life in a way the previous Masterpiece designs can’t quite claim. Overall it’s so stunningly faithful to the animation that it’s actually hard to believe that this thing transforms at all, at first glance – but it definitely does…

#19: The jet mode is also very faithful (but still looks like a clean jet!) 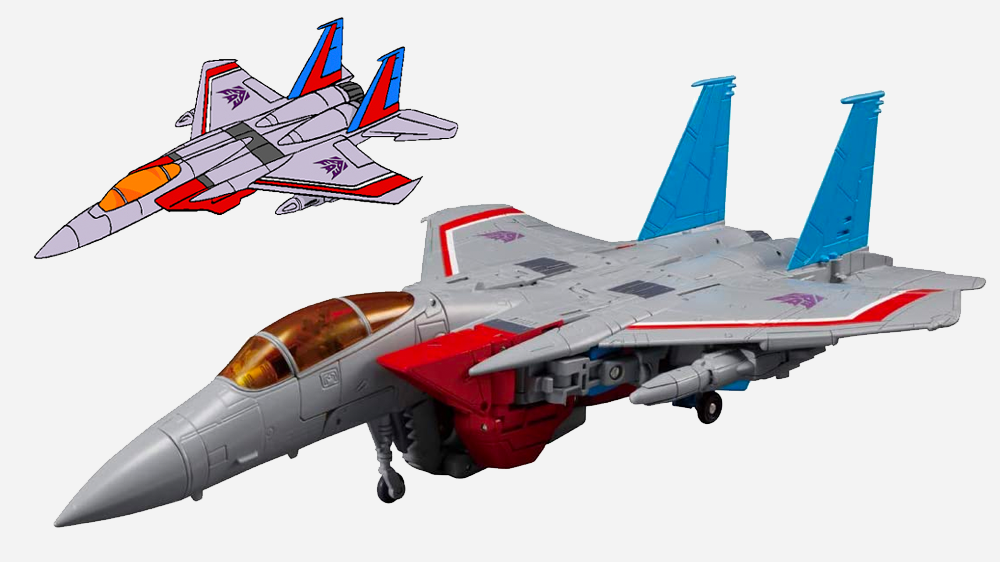 Perhaps it’s all the more impressive to see how astoundingly good that jet form looks to be then, eh? After all, you might have anticipated a dab or two of compromise in order to prioritise a spot-on robot form. However, it truly feels like all angles have been considered here, as the vehicular form is looking just as close to the animation as its humanoid alternative. You may note the red highlights from the tailfins on his animation model are not carried over, but these don’t actually appear for the majority of the cartoon itself, so clearly that’s how the designers have interpreted it (for the better, I’d say). The other thing to note here is that whilst it is a bit stylised, this also looks to be a considerably clean F-15 Eagle mode, too. True, it’s not up there with the likes of the original MP-3 design in terms of real-world slavishness, but it’s still a fantastic attempt all the same, and hits all the right beats as far as a lot of collectors will be concerned, I’m sure.

#18: The robot mode is pretty kibble-free 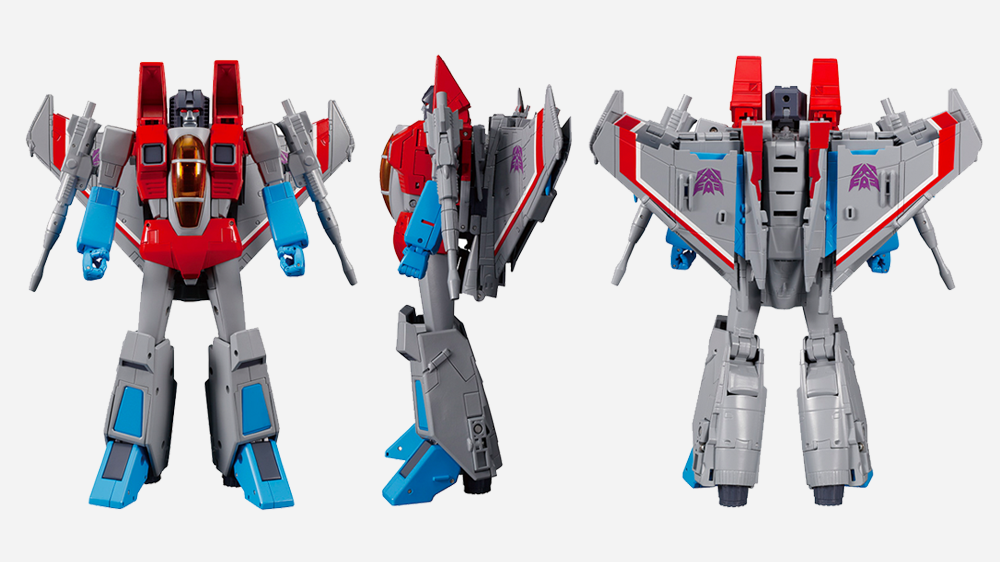 One thing many fans were concerned about with this new design was how the side and back views of the toy might look, especially as there are some quibbles that more-recent designs tend to shove a bit of kibble towards the rear in an effort to have a clean-looking robot form. In truth, I think this accusation is a little overstated (despite some obvious offenders like MP-45 Bumblebee), as the majority of MP toys still tend to be considered from all angles in my experience. Still, it’s hopefully reassuring to see that MP-52 appears to have a very tidy and kibble-free design on the whole, with a mostly minimal backpack going on. Yes, there’re some bits and bobs folded up there, but really it looks pretty good, to my eye, and feels like it’s going to present exceptionally well in-hand overall. 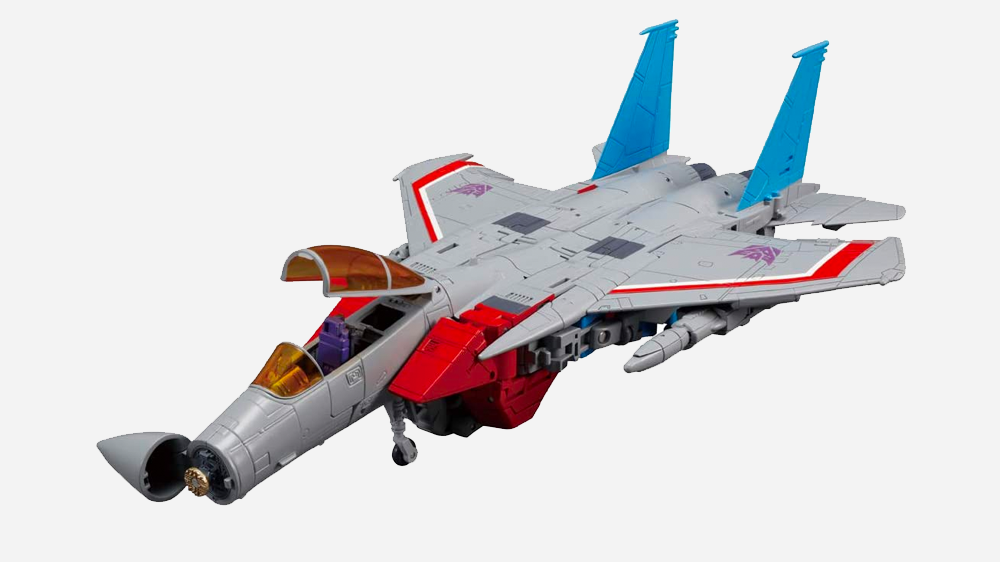 I’m sure everyone expected the cockpit to be able to open, although the interior looks to be nicely detailed too, even including a little purple seat! What’s perhaps more of a surprise is that MP-52 recreates the nosecone gimmick originally found on the slavishly real-world MP-3 (which was later handed down to MP-11 also), adding a dash of F-15 accuracy to the proceedings. You’ll note that the intakes can again fold forward here too, and of course there’s the landing gear as you might have anticipated. 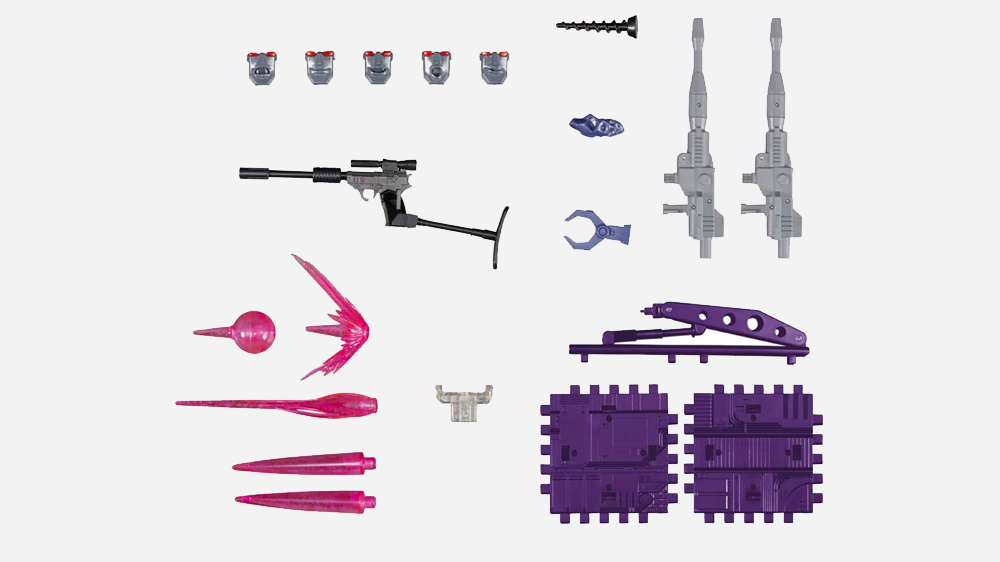 This won’t surprise anyone, given the recent trend of Masterpiece toys, but MP-52 comes with a healthy dose of accompanying parts that all seek to dial up the fun factor! Blast effect pieces, flight stands, additional faces, weapons… it’s all going on. We’ll take a look in detail as we go! It appears that there’s no coronation gear this time though, unlike MP-11, which is sure to disappoint some.

#15: He has transformable null rays! 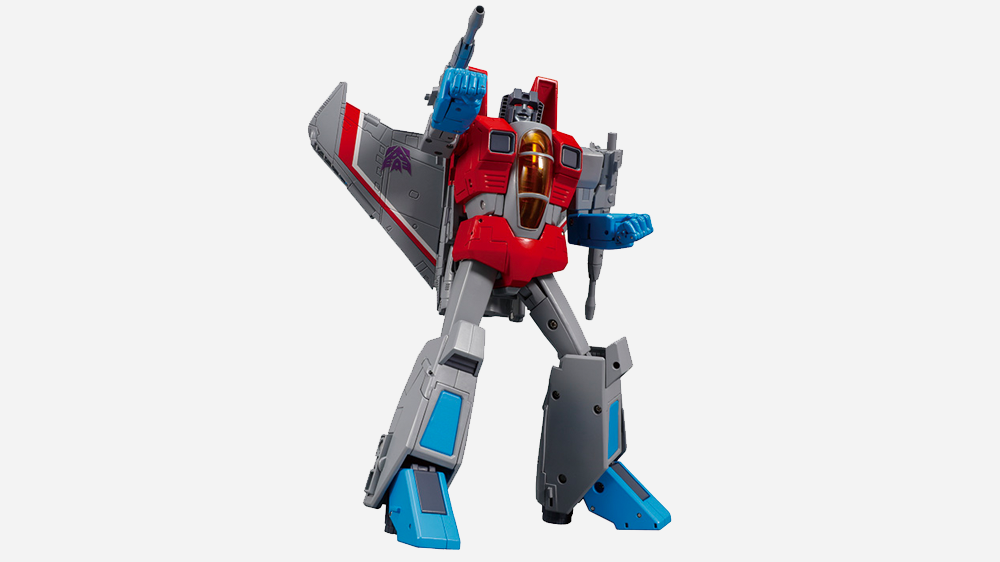 I mean, he wouldn’t be Starscream without his infamous arm-blasters, eh? True-to-form, there they are in prime position, and looking more cartoon-accurate than ever. It appears they also transform (something neither MP-3 or MP-11 attempted), and fold up into the missile weapons seen in his alternate form below – nice touch! It will be interesting to confirm if they need to be removed or if they attempt an all-in-one feature like MP-11’s solution. To my eye, it certainly appears to be the latter, as there seems to be some sort of armature in the jet mode to make this possible. Clearly there are going to be some engineering surprises in store! 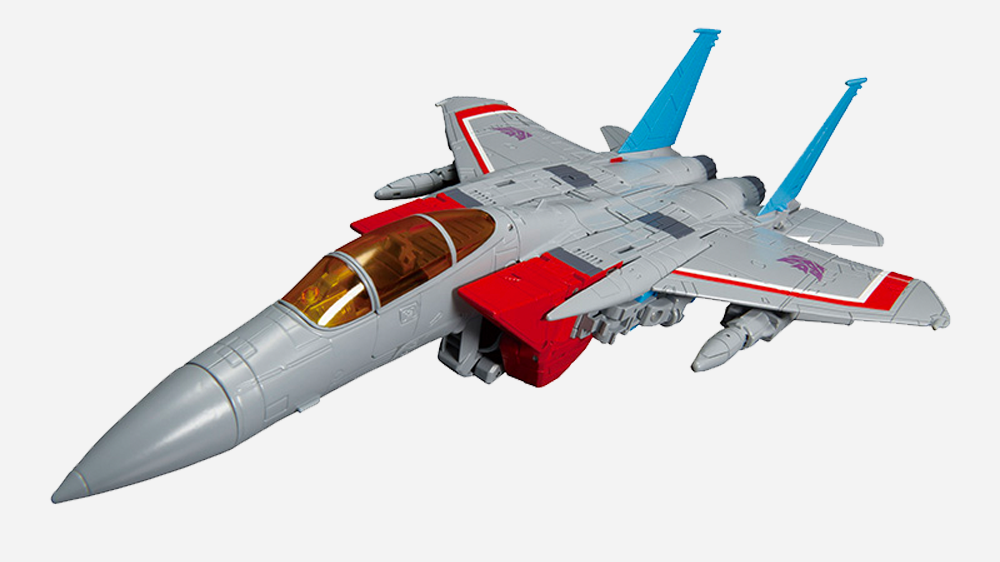 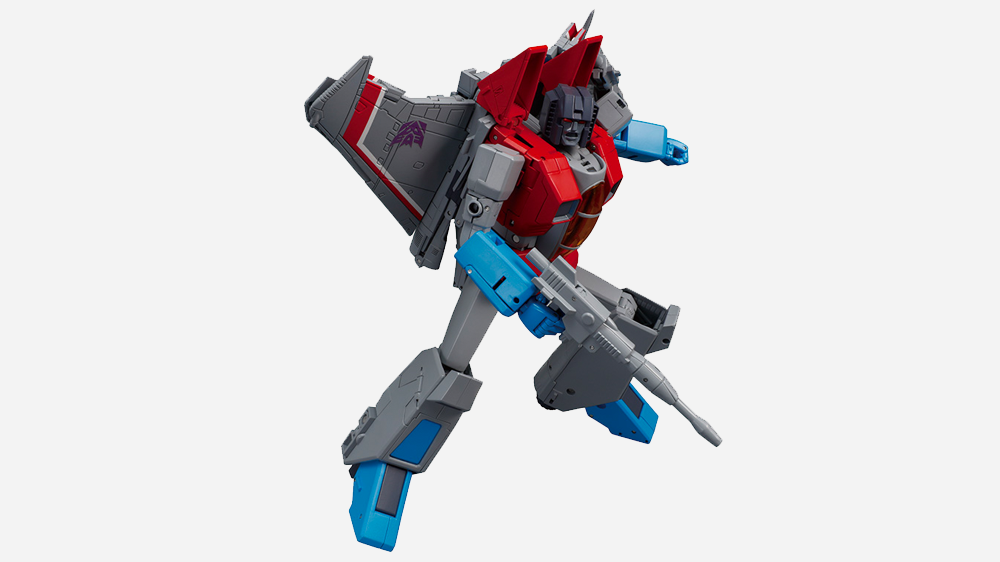 Should you prefer then the null rays can clearly be removed from the arms and wielded as a more traditional blaster. I’ve seen a couple of people wondering why this was included, but indeed there are examples of the Seekers doing this in the cartoon, most notably in the very first episode!

#13: There are some integrated gimmicks too 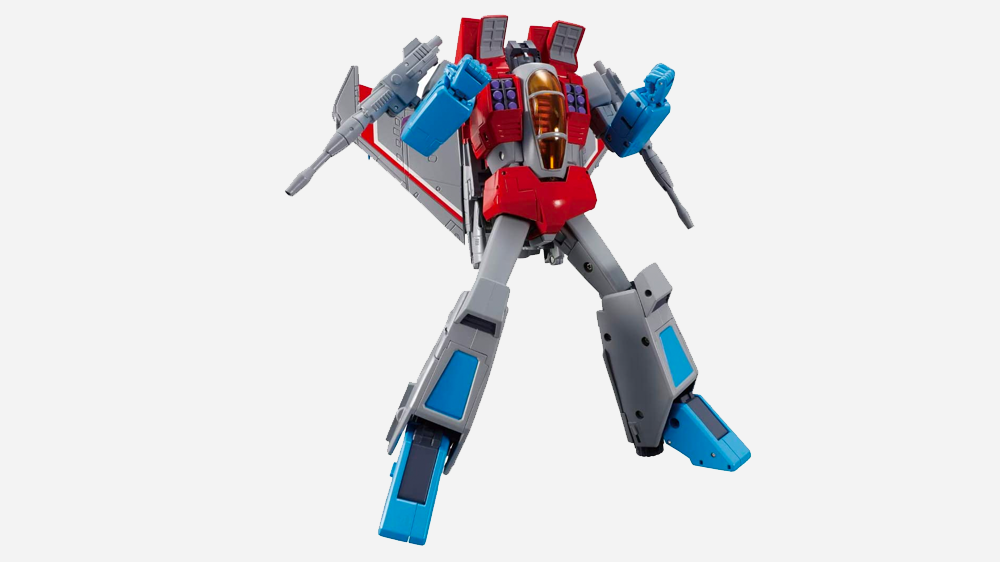 It’s interesting to see that his “boob missiles” are still intact here too, having been another gimmick that was present on the previous designs of this character. Here, the way the panels flip-up to reveal two racks of weapons looks to be a little more cartoon-accurate than before though, and recreates a scene from the episode, Fire on the Mountain. 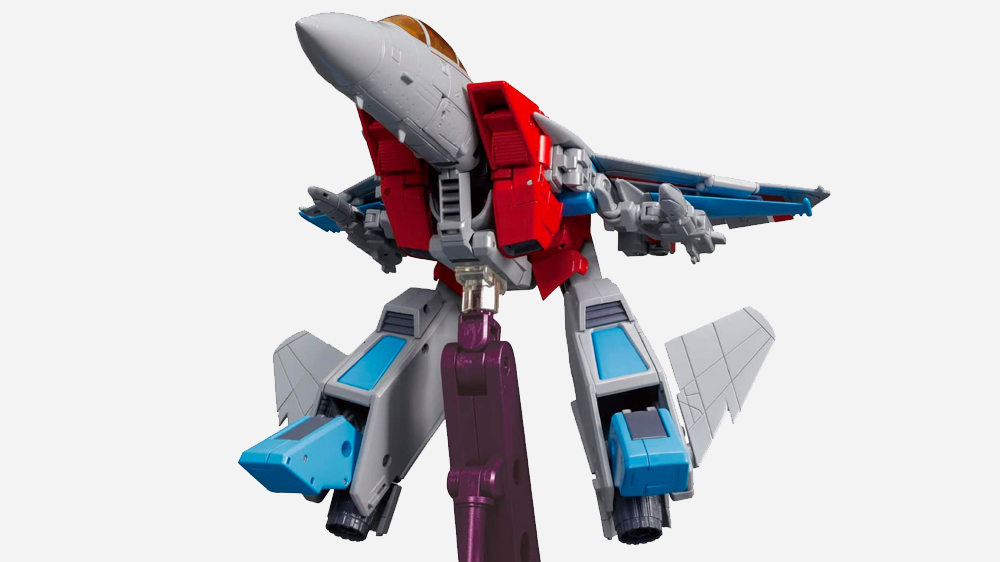 Robo-fans love a gerwalk mode, don’t they? In this case it’s another cartoon nod, as the photo above is looking to recreate the animation as closely as possible. We’ve even seen Skywarp giving this a go in episodes such as Dinobot Island, so it’s exciting to see it reproduced so skilfully here. Oh, and there’s that flight stand in action, which is a recoloured version of the same accessory we saw included with MP-41 Dinobot!

#11: There are blast effect pieces… 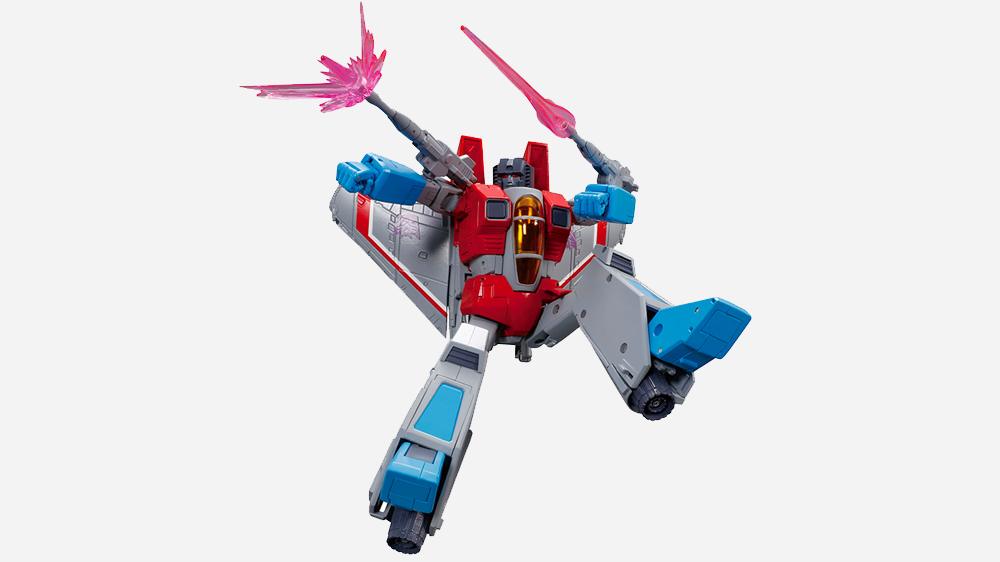 Keeping on trend with some of the other more recent Masterpiece toys, MP-52 is sporting numerous translucent blast effect accessories that can seemingly be utilised in a variety of ways to make him look like he’s in the thick of the action! 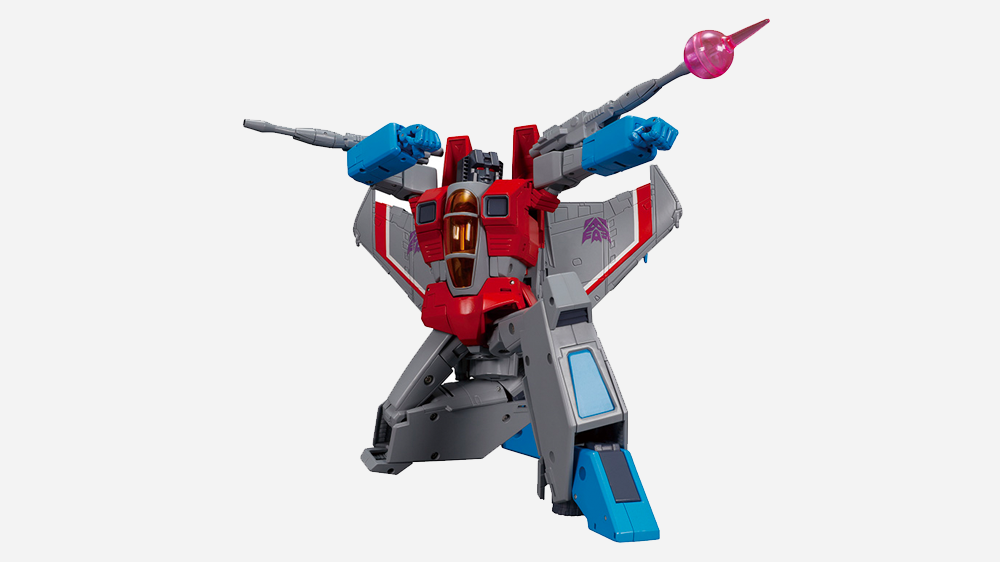 In fact there are quite the variety of these pieces, which again seem to be all designed to recreate different moments from the cartoon as faithfully as possible. Should be a lot of fun!

#9: The blast effects pieces can be used on jet mode too 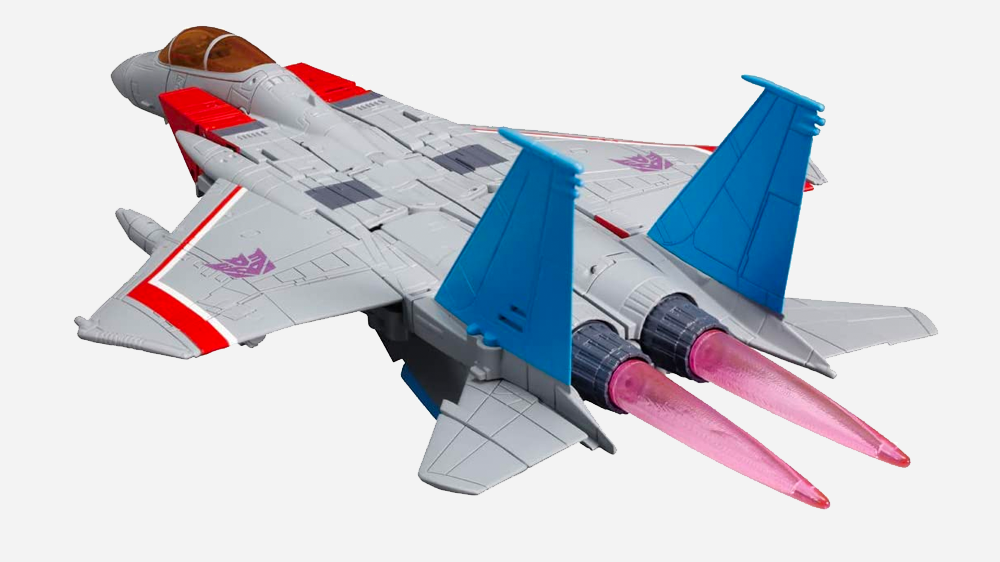 And in a neat twist, those same pieces can apparently be used to give MP-52 the appearance of jetting off to action… or maybe he’s in retreat!

#8: He has a drill-hand accessory 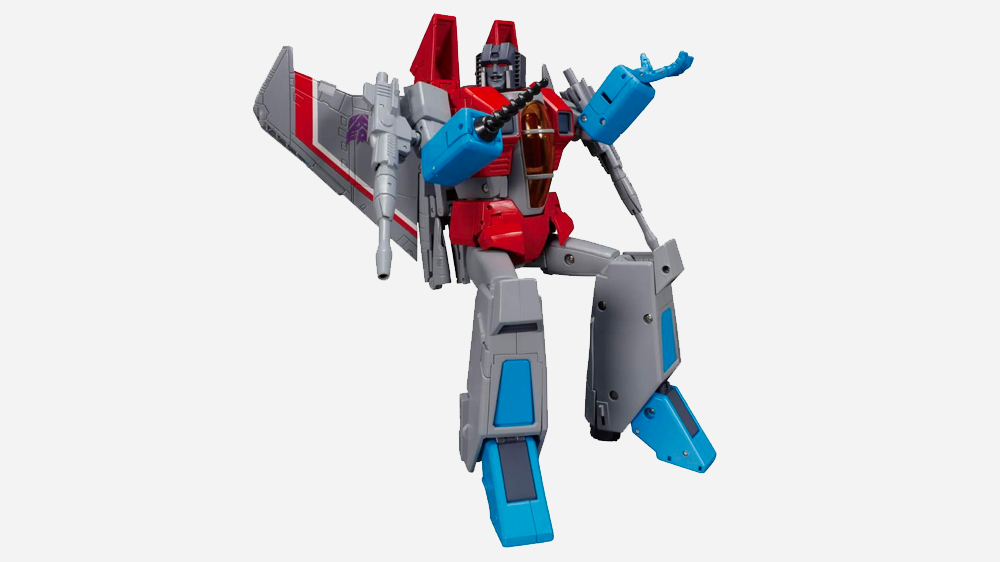 Unsurprisingly, this is another distinct cartoon nod, in this case quite faithfully recalling a scene from the episode, The Core, when Starscream drills into a large boulder. No doubt it could be used to attack a few Autobots, too! 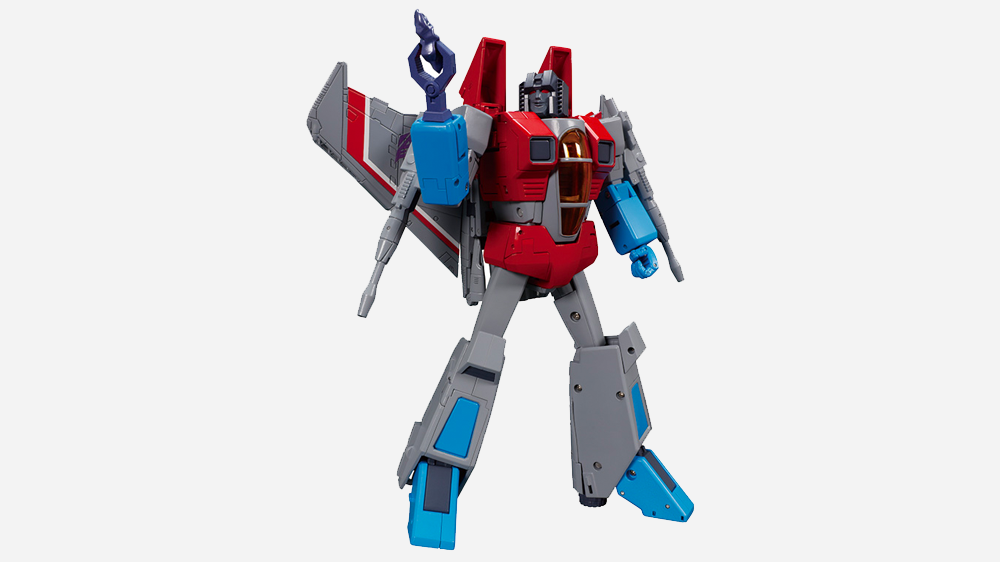 As if the drill wasn’t enough, they’ve even included this alternative option which pays homage to the episode, Cosmic Rust, and includes both the claw hand that Starscream uses to pull a piece of Shrapnel out of Megatron, as well as the shrapnel itself! 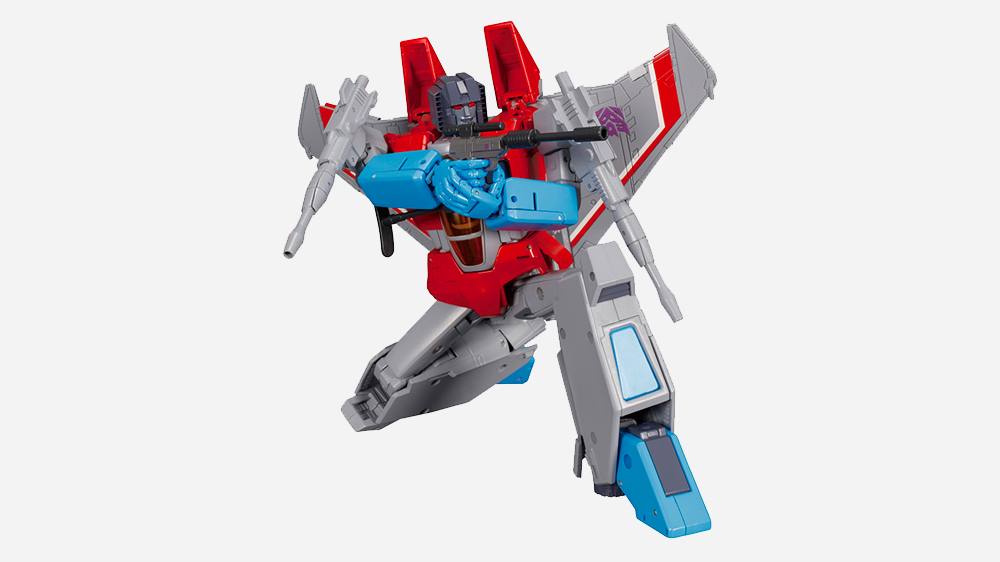 Well, technically… yes, it’s the return of the mini-Megatron gun accessory, after a similar version was all the rage in the very early days of the Masterpiece line (having originally been packaged with MP-1 Convoy). This version looks to be more faithfully cartoon-accurate, as you might expect, and can be wielded by MP-52 in a direct nod to the small screen. It’s also worth noting the superior poseability on display here!

#5: The Mega-gun can attach to jet mode 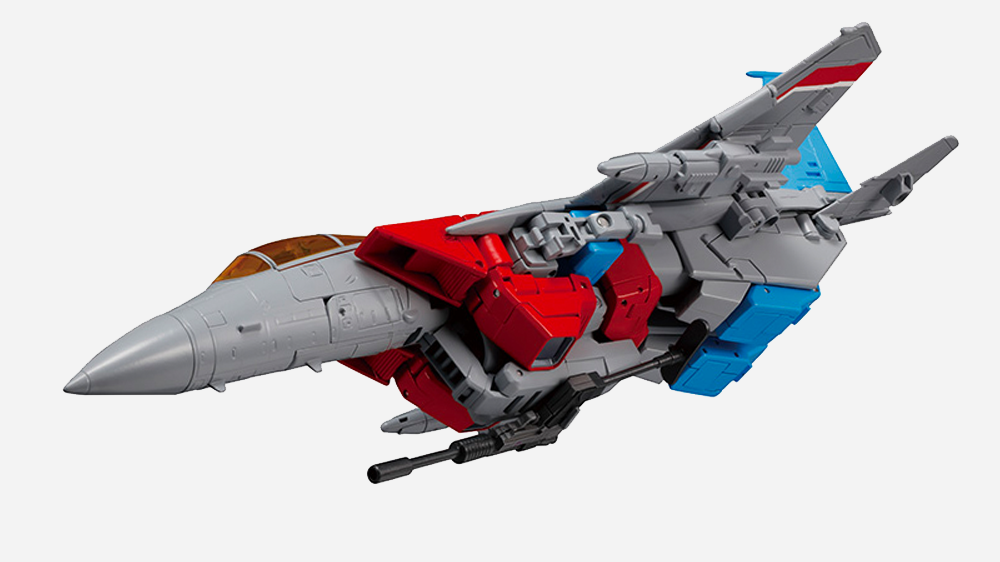 Even better, than mini-Megatron accessory can then be sported in jet form, again bringing the cartoon to life and giving us a nod to the episode, S.O.S. Dinobots, as the two characters join forces towards the end of the adventure. Funnily enough, we have seen this done on the original MP-3 design already, but it’s distinctly closer to the animation this time around.

#4: The many faces of Starscream 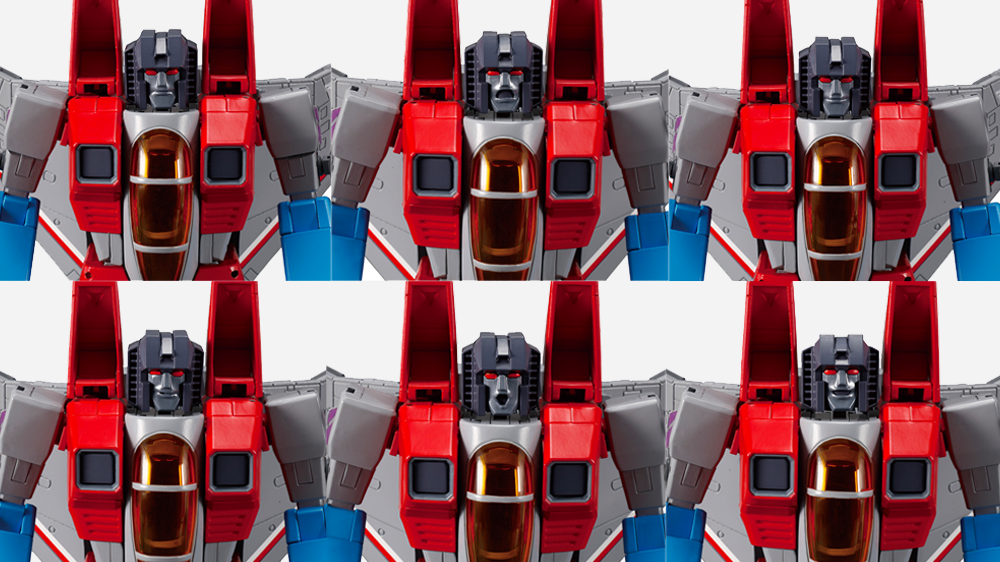 MP-52 features no less than six(!) different options for swappable faces, meaning that you’ll never be short of ways to display him! One things for sure, the designers have clearly combed countless frames of animation when putting these together, as they all seek to give the new Starscream design an extra shot of personality behind the plastic.

#3: He’s the most poseable MP Starscream so far 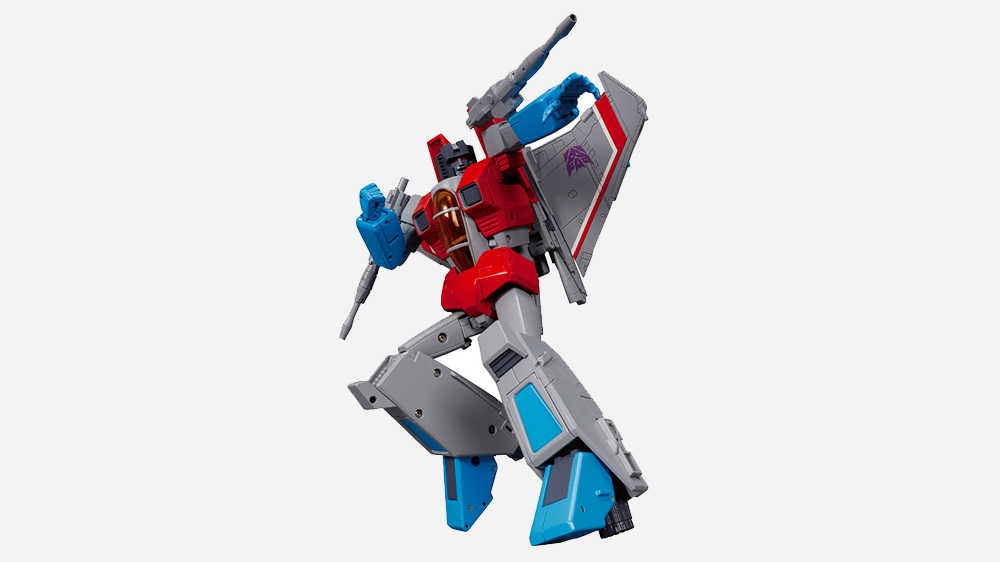 Of all the many things that MP-3 and MP-11 had going for them, they were not the most poseable of toys! By comparison, MP-52 seems to have course-corrected this aspect and then some, featuring what appears to be a healthy dose of articulation all round. The fact that he can pull of a kneeling stance is exciting enough, but it will be fantastic fun to get him in hand and put him through his paces. Perhaps the only remaining question a lot of fans have is if there’s a waist swivel, which hasn’t been shown so far in any of the photos. Our verdict? It doesn’t look like there is, although there’s most certainly a decent ab crunch. Still, it appears that there’s more than enough going on otherwise!

#2: He looks superb alongside other MPs! 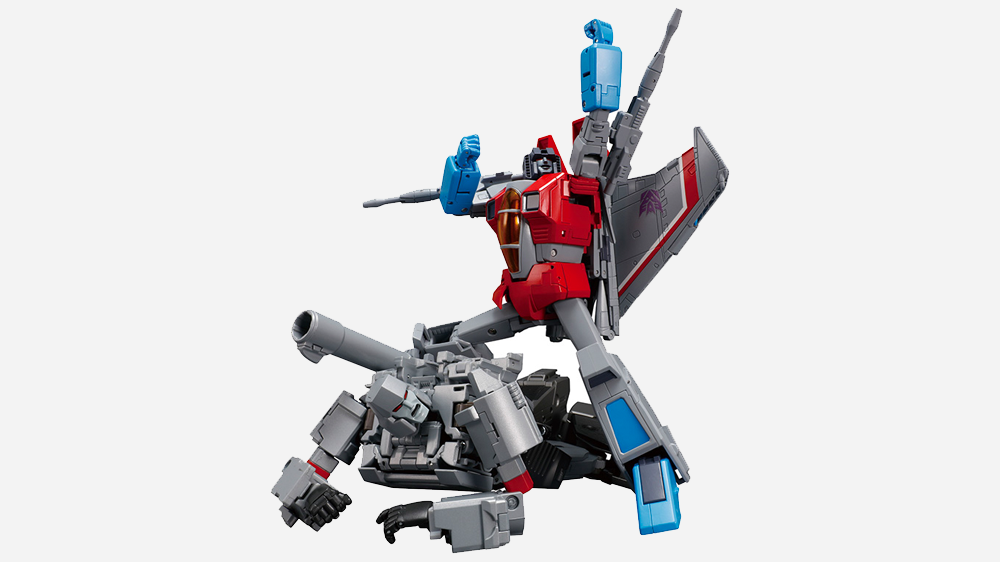 Well, here’s the money shot then… seeing how this new Starscream design looks alongside MP-36 Megatron makes it a no-brainer, as it clearly surpasses MP-11 in a large number of ways and so faithfully brings the scheming Decepticon lieutenant to life. Incredible.

#1: In fact, he just looks stunning all round! 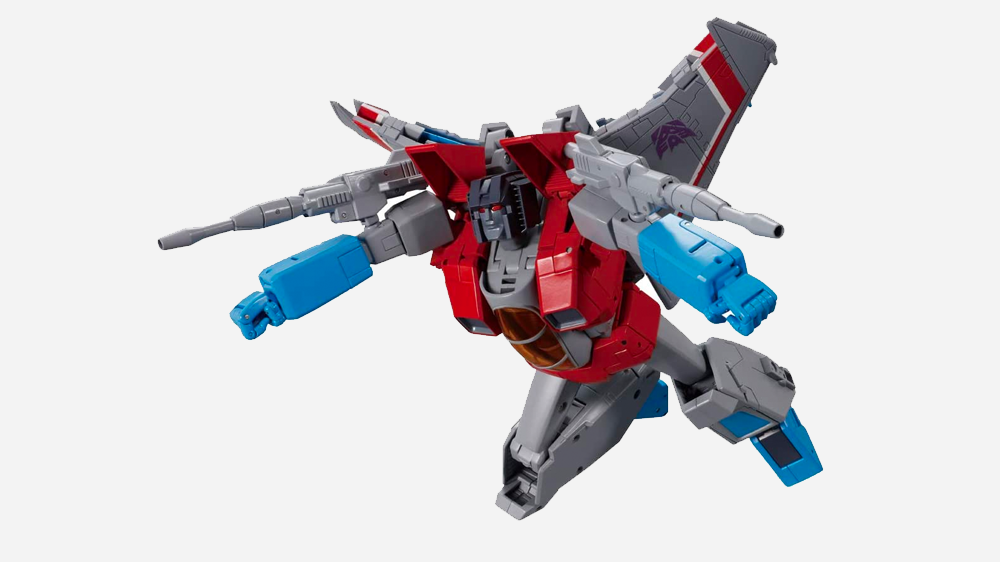 Seriously though, just allow me one more moment of gushing on, as I’m still not quite over how good this thing looks… sheesh! Hard to imagine that like a lot of people, I was actually groaning at the very idea of another MP Seeker mould not so long ago. Hindsight, eh? Needless to say, I’m very much on-board now, and cannot wait to have him in hand!

So that’s our list. Did we miss any other bits you’re excited about on MP-52?

This entry was posted in Source Articles Tagged with Countdown, Masterpiece, MP-52 Starscream