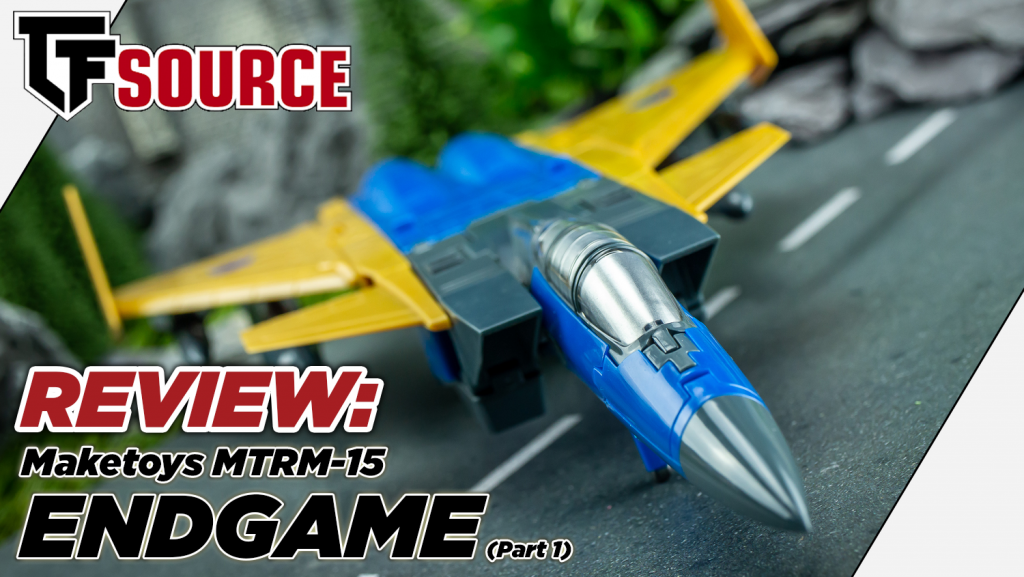 The secret to being a successful “third party” toy manufacturer is all about timing, isn’t it? Strike when the iron’s hot, such as when a particular character has yet to be produced either officially or non, and you just might have a hit on your hands by plugging a much-needed gap in the market. However, wait too long and things tend to fizzle out a bit, especially if an even juicier option pops up in the meantime. Which brings us back to Maketoys Endgame, really. 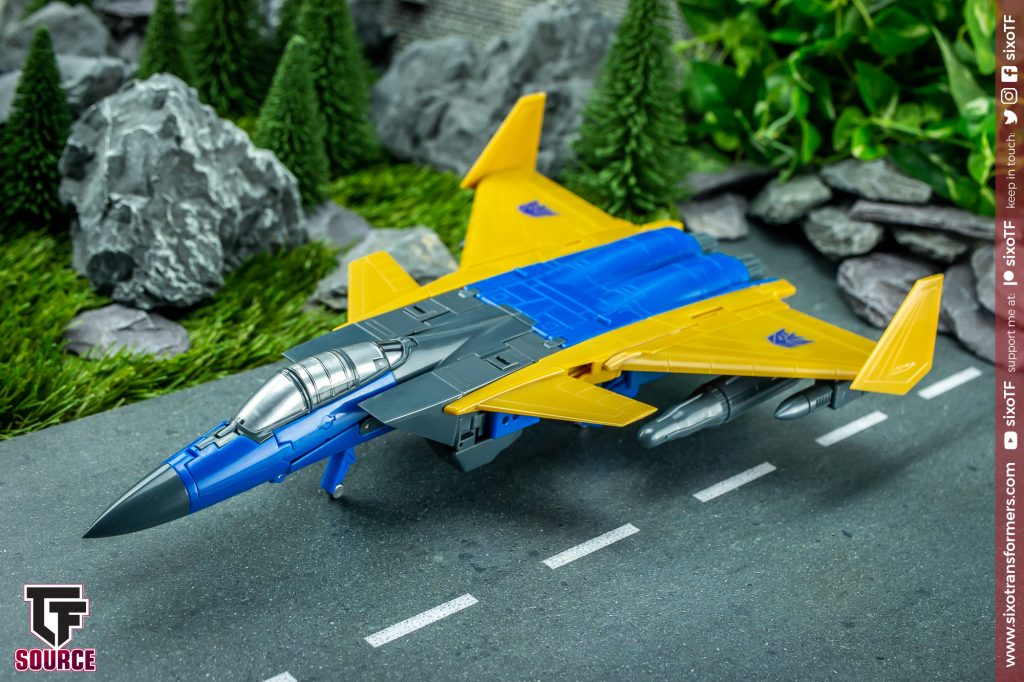 After all, the Maketoys Seeker mould was first unveiled some five years ago now (I know – HOW is that true?), and although it took a little time after this to finally come to fruition, it was still perfect timing for the original trio. Meteor, Lightning and Skycrow all met with a rapturous reception and continue to be in high demand even now. Seriously, just check out the aftermarket prices these things can fetch and then come back to me – it’s sheer madness! 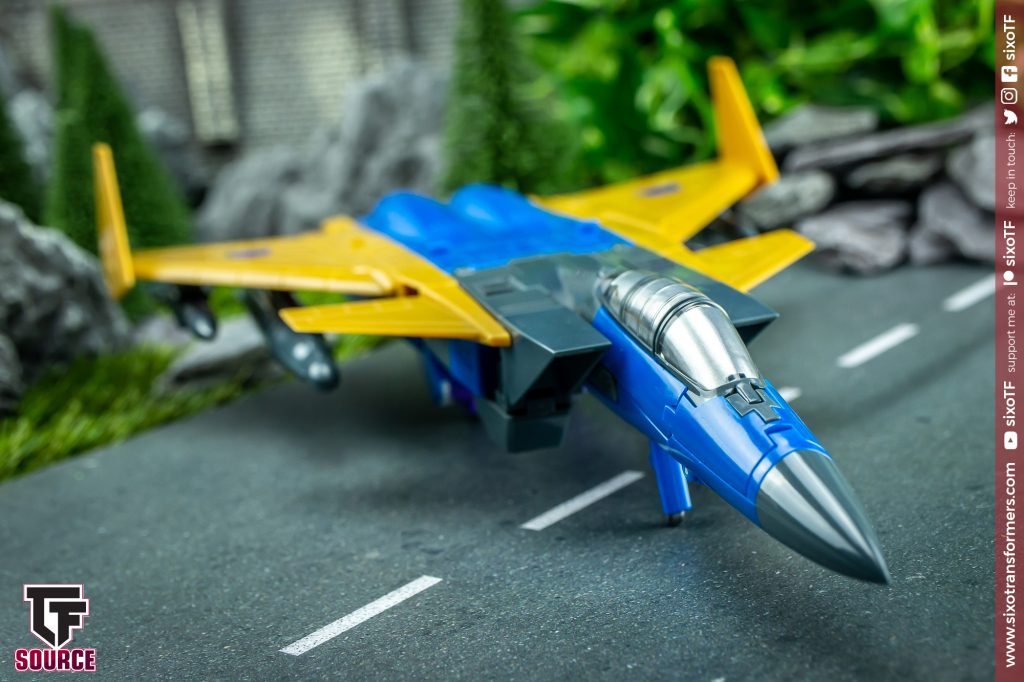 The success of the original version of this mould wasn’t just down to luck, either. The last official Masterpiece attempt at the Seeker design is the MP-11 mould from 2012, and, let’s be honest, you’d be hard-pressed to find many fans who would go to bat for it as being one of the line’s best. It seemed ok at the time, but something about it just hasn’t aged all that well, and that seems especially so because of how subsequent releases have moved on in terms of aesthetic and engineering in the years since. So when Meteor showered in, it was like a breath of fresh air for many. 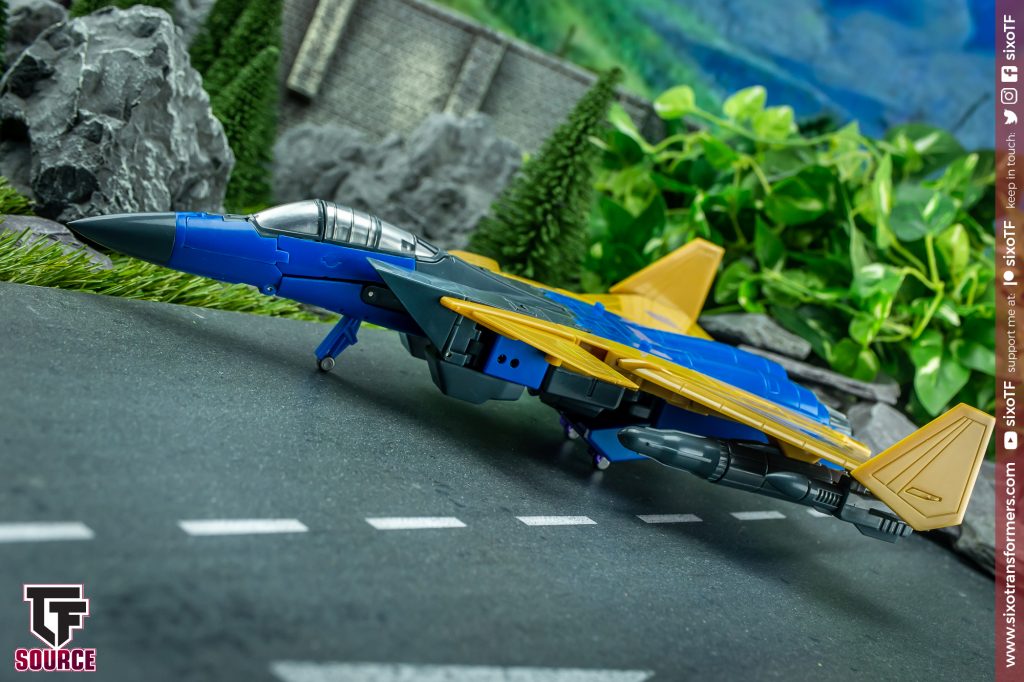 The unofficial design was thought to have improved on MP-11 in several key areas, not least of which were articulation and how closely it looked to the character’s animation model – both key factors for any collectors deciding which toy is ultimately going to take a spot on their shelf. Surely then, the time was ripe for a Conehead remould! After all, with a little retooling here and there, you’ve got yourself another 3 potential toys to release (maybe more, factoring in stuff like a potential Generation 2 Ramjet homage). So there was quite a bit of buzz back when Maketoys first unveiled a look at the prototype for Endgame, their take on a Masterpiece-styled Dirge… in 2017. 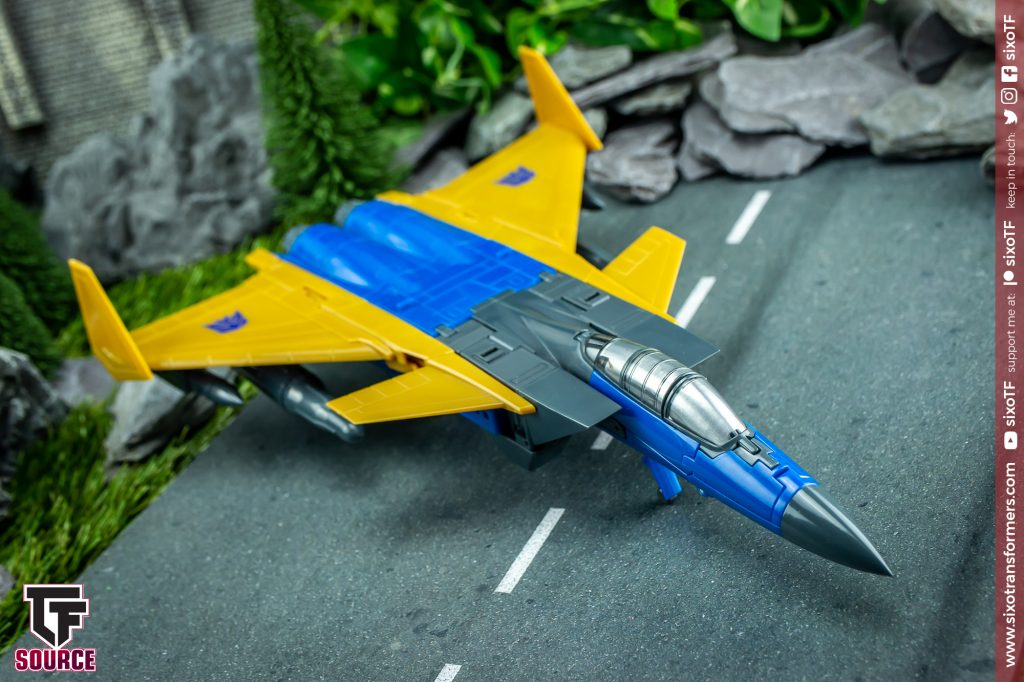 Then it all went a bit quiet, as for the longest time it seemed like the whole project might never happen at all, mostly due to some rather well-publicised difficulties behind the scenes at Maketoys, leaving collectors to sit and murmur away wondering, “where’s Dirge?“. Well, fortunately, he finally arrived toward the end of last year, although the question now becomes, “is he too late?” 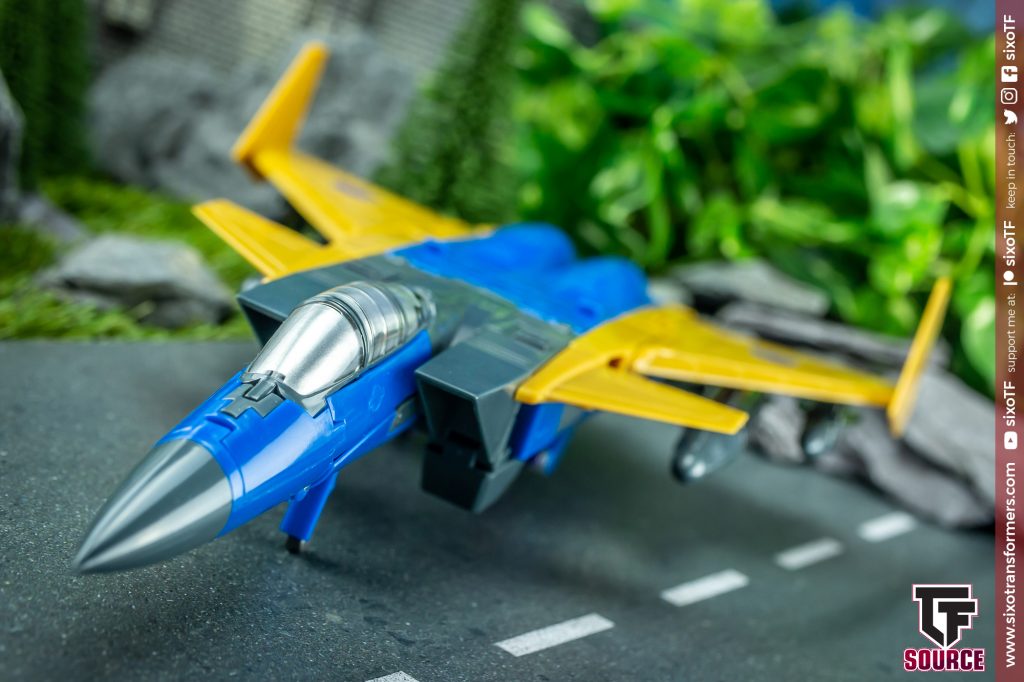 You see, there’s been this new toy unveiled – a new Masterpiece Seeker mould. Maybe you’ve heard of it? It’s been kicking around the Internet a fair bit, recently! Needless to say, it’s caused quite a lot of comment and speculation, including around the inevitability of a second set of Masterpiece Coneheads further down the line. Of course, this potentially gives Maketoys some very stiff competition indeed, and means that Endgame here needs to being the goods in order to be of interest to collectors who are either not wowed by the idea of another official trio (whether because of the price tag or otherwise) or who are unwilling to wait however long it could be for such a set to finally be released. 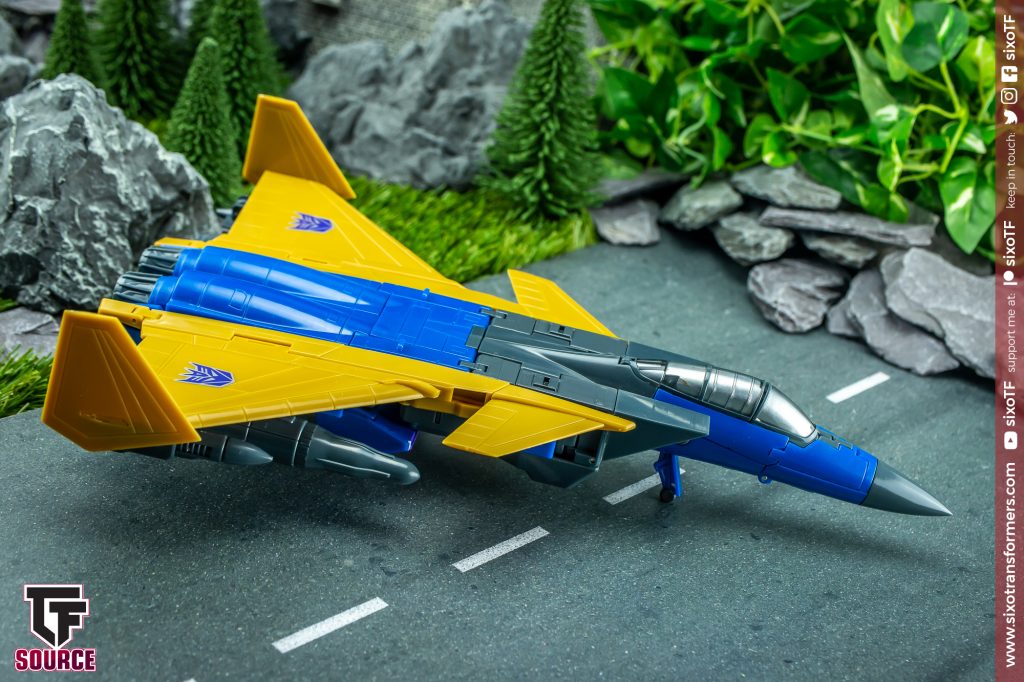 The good news is then that he presents quite nicely on the whole. If you’re not yet familiar with this mould then it’s worth noting that it does a great job overall at bringing the all-too-familiar F-15 Eagle alternate form to life, and features a surprisingly small amount of compromises considering how cartoonish it ends up being in robot mode. Of course, Endgame has been heavily-modified as befits the intended character in this case, with new wings, an absence of rear fins, new weaponry etc. Ultimately it all looks as you’d expect and comes across as suitably “Dirgey”. 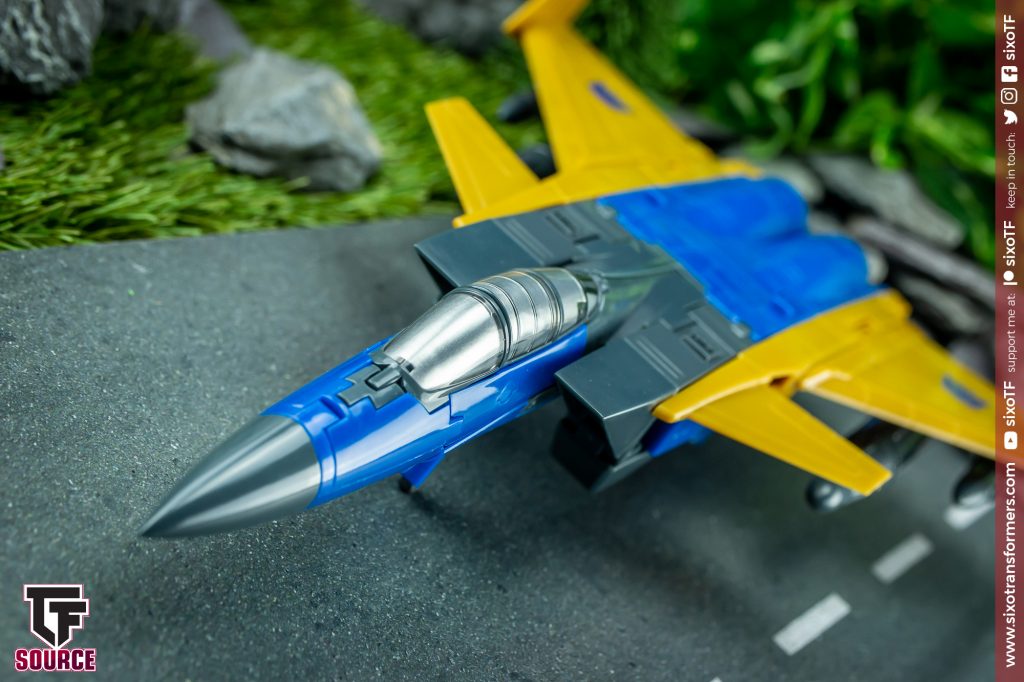 The colours are on point too, with the blue being especially attractive in hand. I’m also a big fan of the warm grey they’ve used and think it mixes well, although somehow the brown wings do little a little drab, perhaps. It’s a decent-enough approximation for the character’s appearance in the cartoon, but it’s just not quite a vidid as the original toy and I think could maybe have done with just a touch of a saturation boost to help it pop a little. 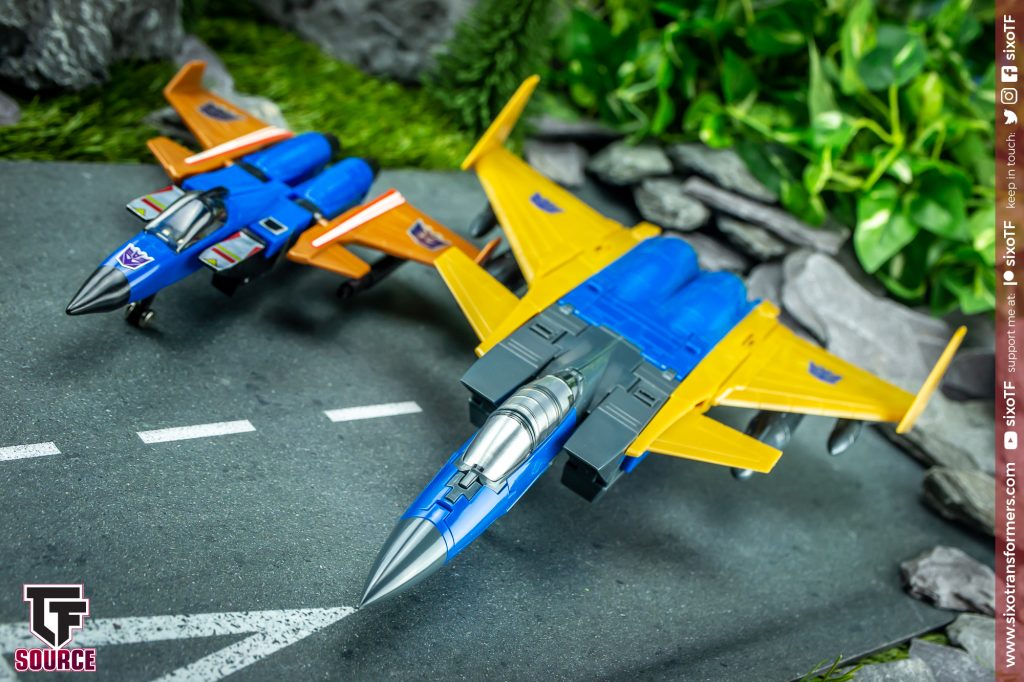 It doesn’t help that much of the top section of the jet is rather plain, and in particular the wings. To be fair, it does fit the cartoon design and styling to a tee in that regard, but perhaps this is one of those instances when you can be lacking a little too much detail, even if it is “accurate”. Still, it’s massively helped by the addition of a couple of Decepticon logos to break things up a bit. 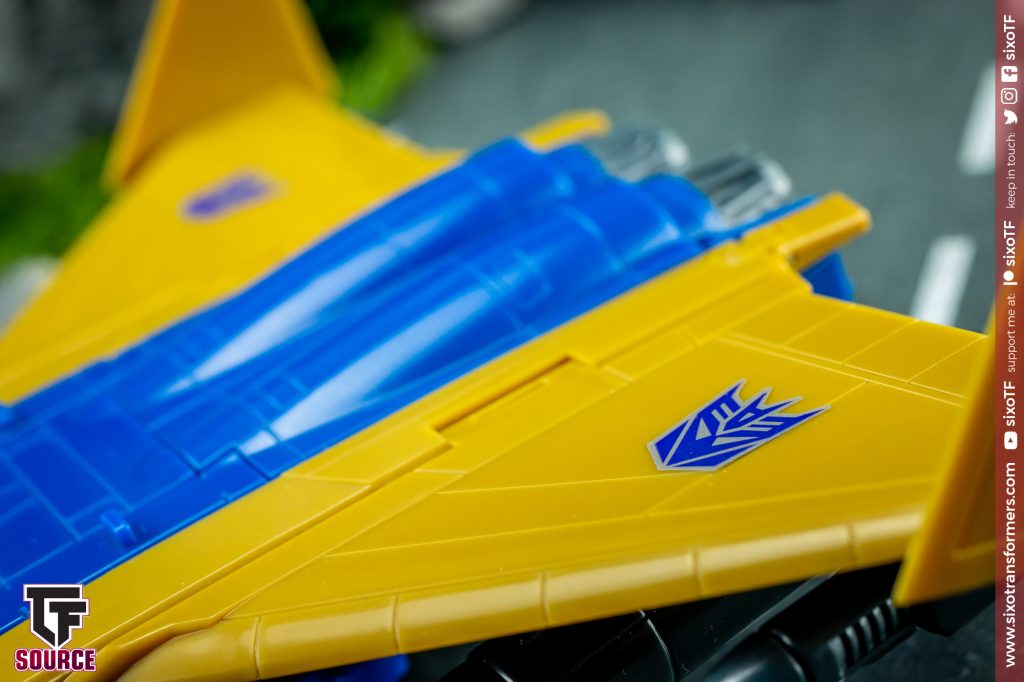 The other main splash of visual interest on offer here is the cockpit section, although given it’s a rather simple sparkly silver, that’s not giving Maketoys much to work with! It does mean that on the whole it’s not the most excitingly coloured jet form I ever did see, but as I say it still presents nicely on the whole. 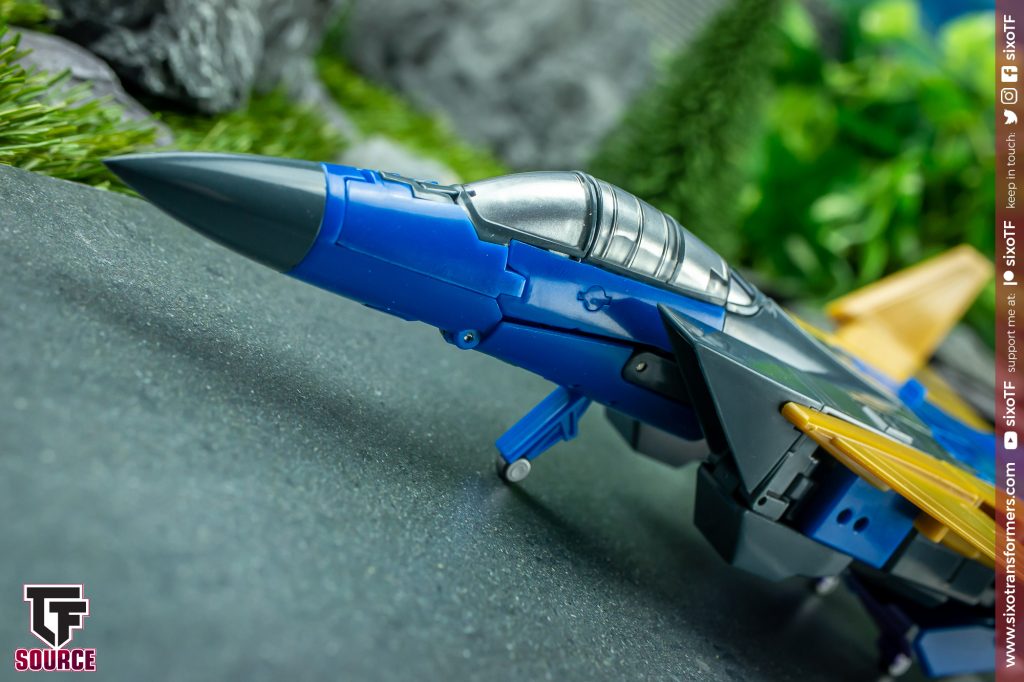 Well, sadly apart from some rather bizarre marks on the cockpit section on my copy, too! It’s very strange – there are a couple of almost-sludgey brown stains underneath the translucent plastic itself, in a spot where unfortunately I’m not able to clean it at all. Not the best, in terms of QC. 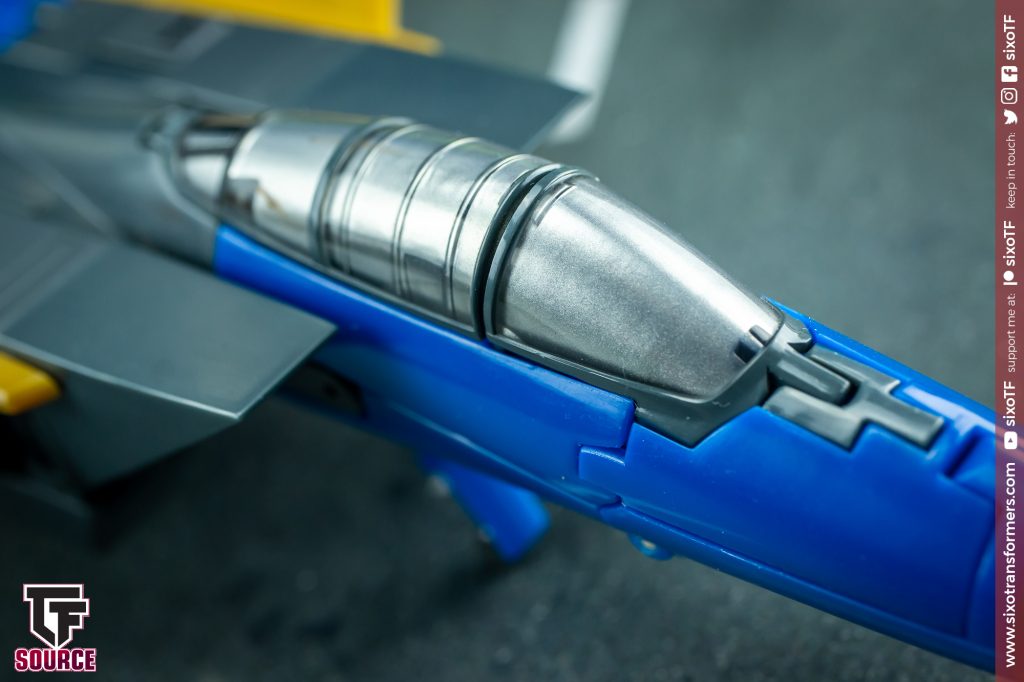 It’s a shame as otherwise he’s really all good in terms of fit and finish, and feels suitably on par with your typical Maketoys release. I have found their Seekers to have the odd bit that pops off unexpectedly here or there, but there’s none of that with Endgame. He’s solid and clips together very well indeed. 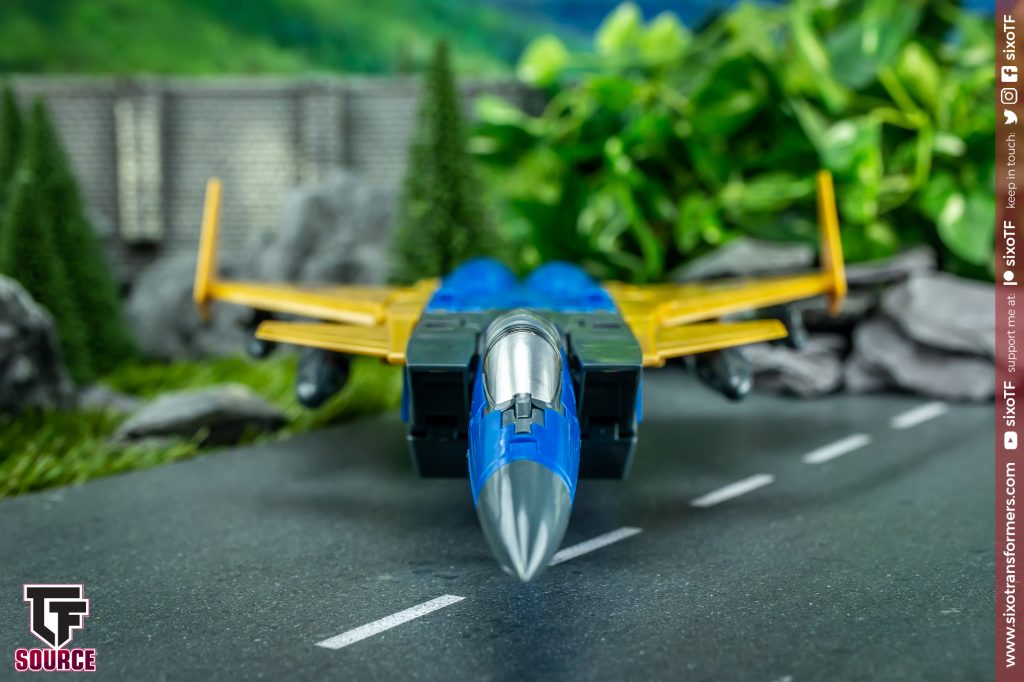 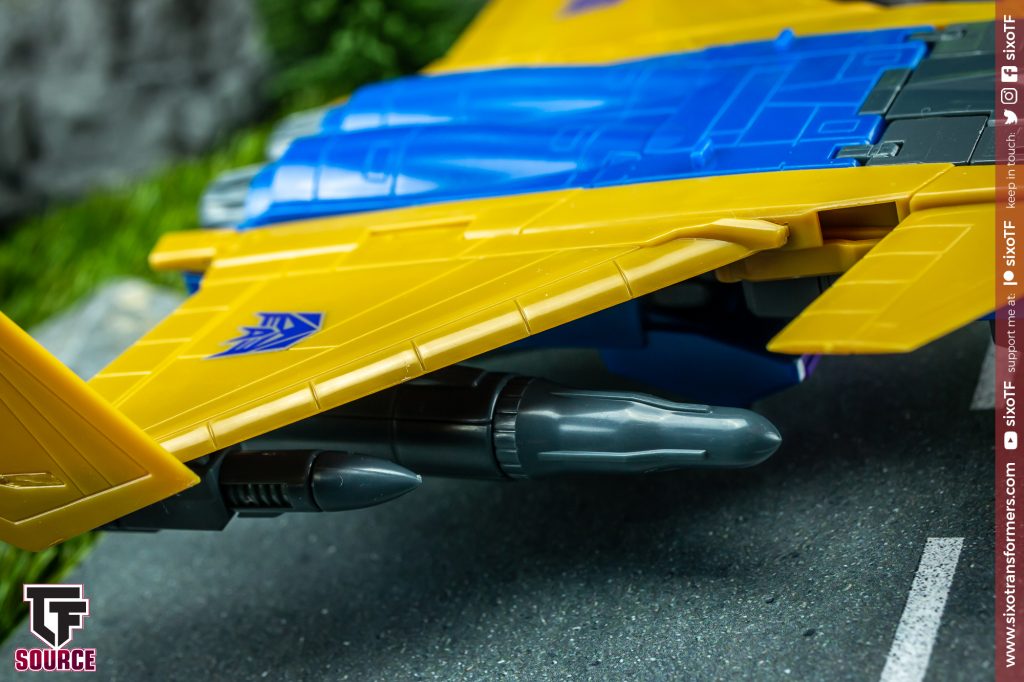 What is a neat touch is that you can store two sets of weapons under his wings, should you wish. He comes with a set of (what I believe may be) cluster bombs that serve as a decent approximation for his on-screen look, but then you can also utilise a shortened version of his robot mode null rays for a spot of extra firepower. 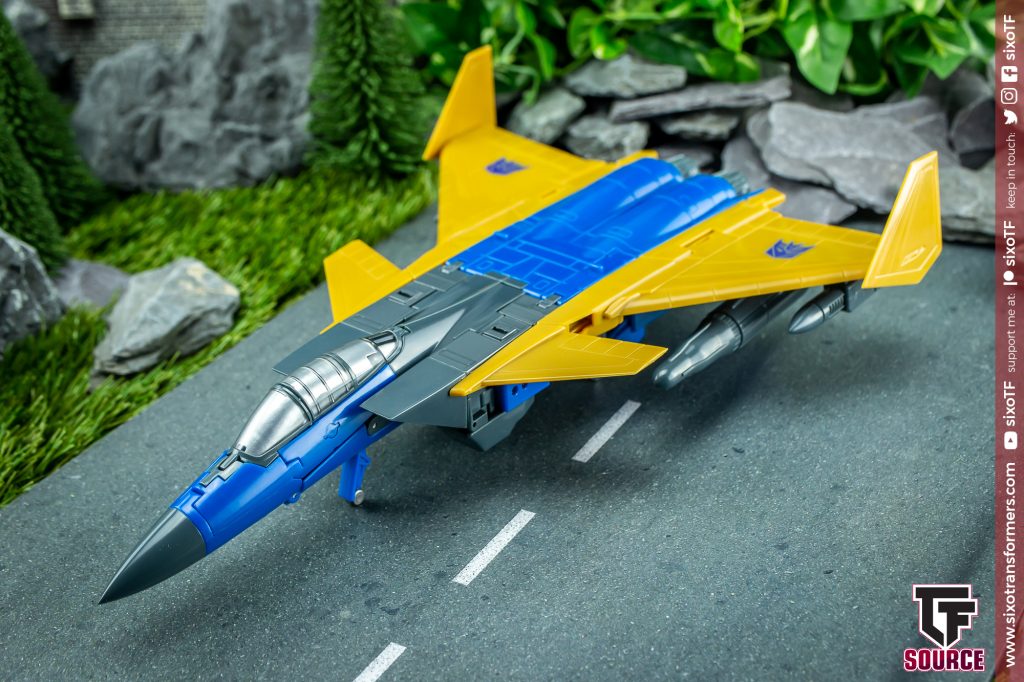 It adds a little something to the overall look of the jet mode, I think, with the other main gimmick-of-sorts being the landing gear. I would advise a little caution on the rear set of wheels, as they pop out of the painted purple section on his knees, so worth making sure you don’t scratch anything by accident. 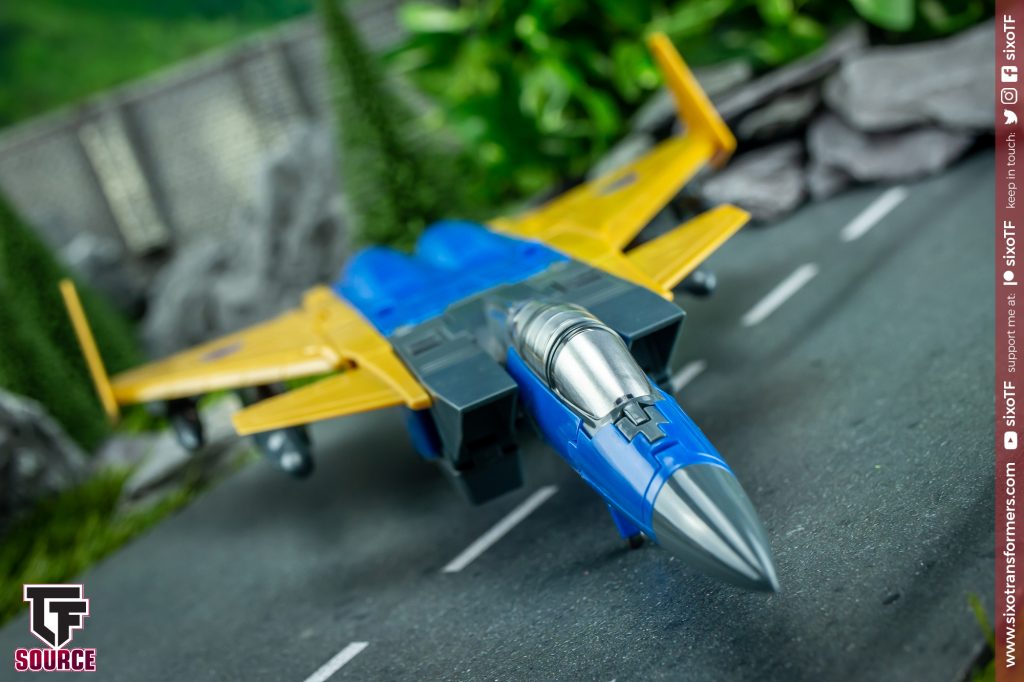 Overall then, I think Maketoys have done a nice-enough job with the vehicle mode. I’d say there’s nothing too remarkable about it all, but then it does look about as nice as would be expected, so that’s not me trying to be harsh! 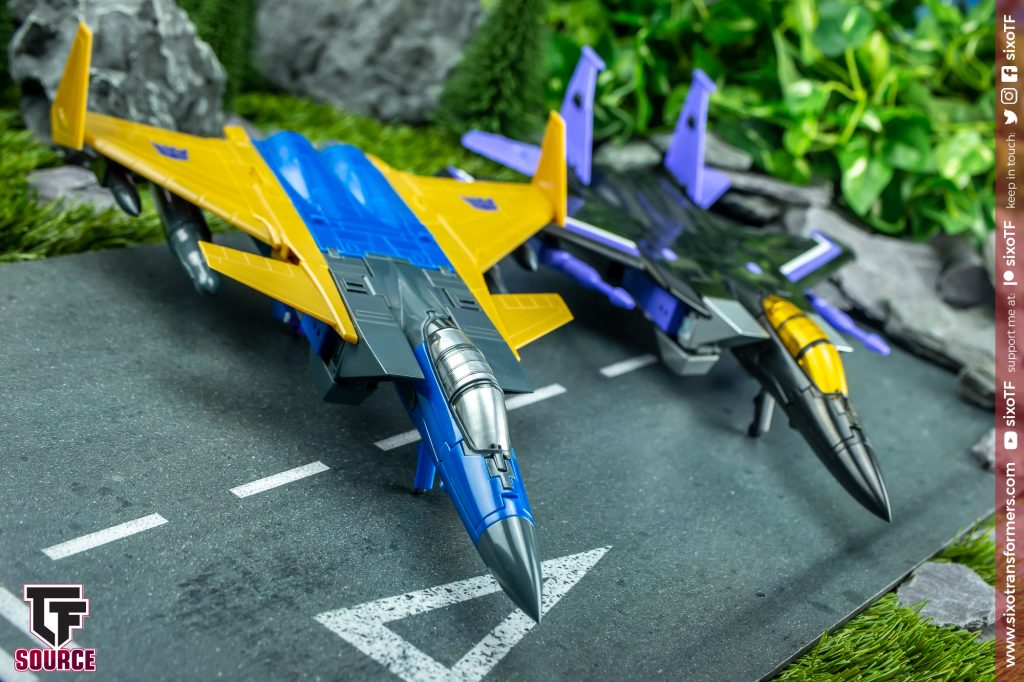 I think pitting him against the likes of one of his mould-mates will show you what I mean. The Skywarp paintjob is one that wears any design pretty well, and so here it really makes the original Meteor mould pop with those eye-catching purple accents and gold canopy. 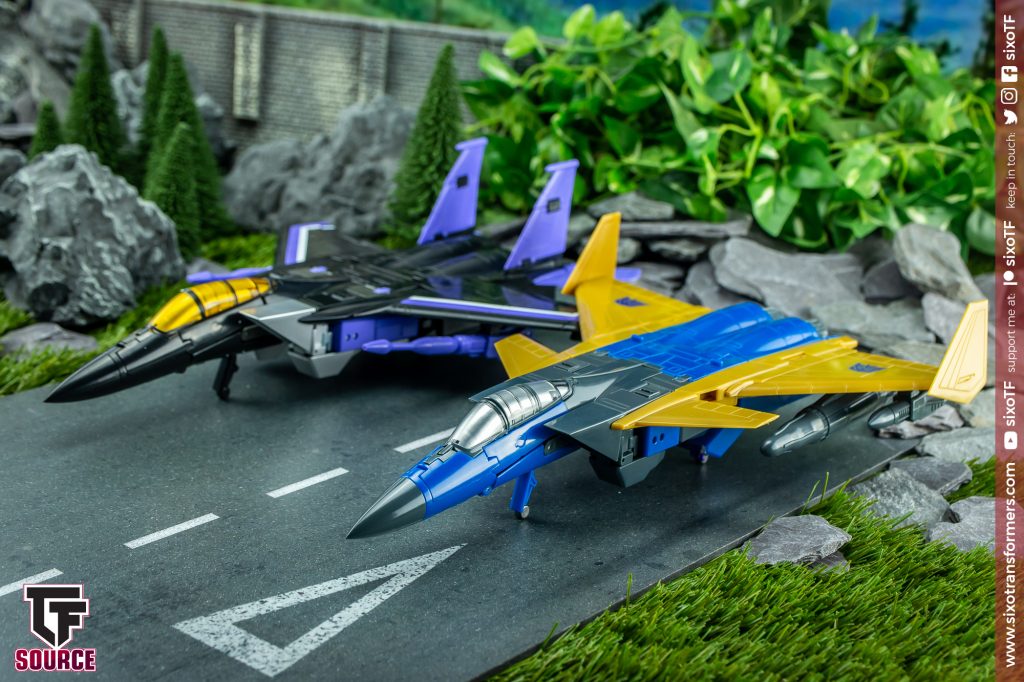 Endgame shapes up well enough by comparison, but doesn’t feel quite as remarkable somehow. I think ultimately he’s one of those designs that just needs his two colleagues around! 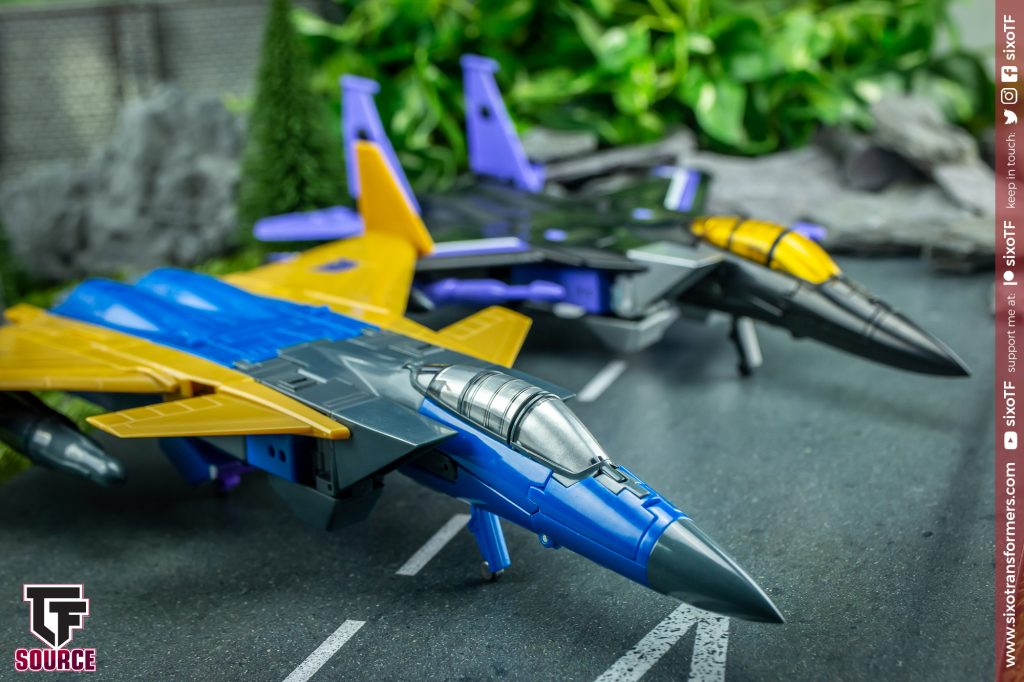 Here’s hoping that Maketoys ever get that far, of course, as it’s all gone a bit quiet again on news regarding ‘Booster’ and ‘Jetstream’. It would be a shame indeed if their line-up is never concluded, though somehow it could well end up being the case, at this stage! Could Endgame end up as their only Conehead? 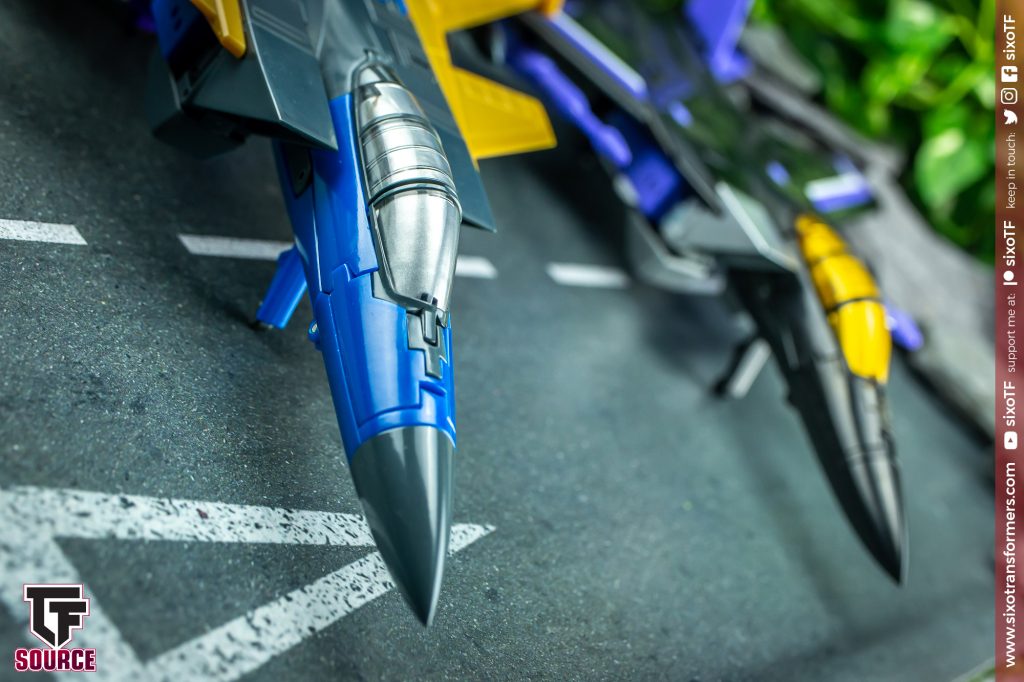 Certainly I’d imagine that may come to pass if indeed TakaraTomy manage to get there first, although one would hope that there’s more than enough time for Maketoys to still make it happen before that! I think there’s enough interest for them to give it a go, too, based on what I’ve seen online. In the meantime, we’ll have to see how this guy looks against the current official effort, with MP-11ND. 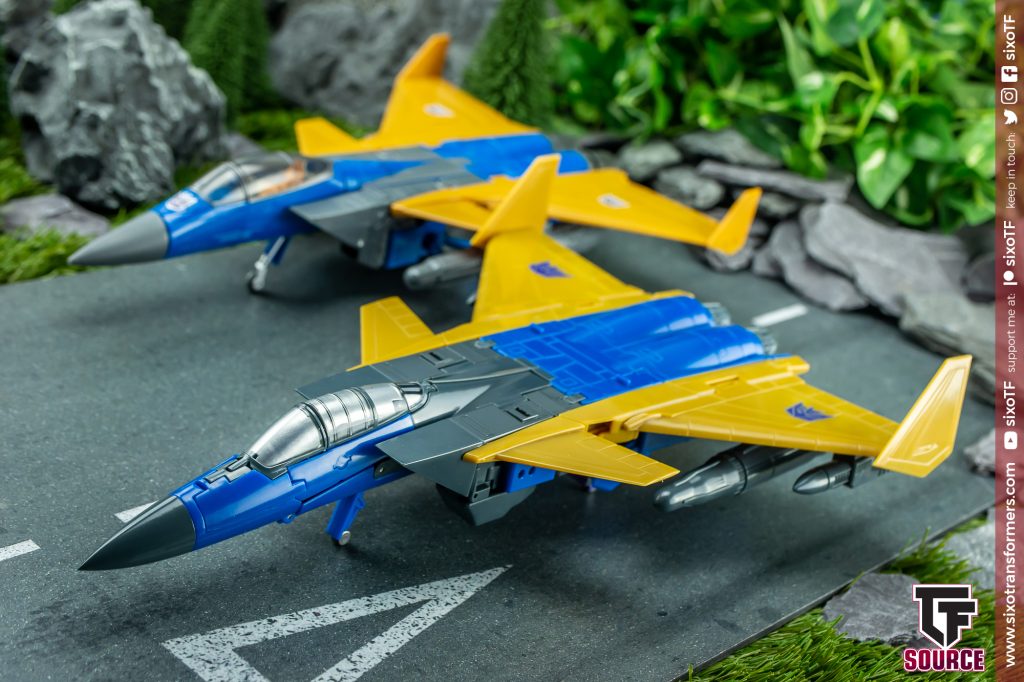 For what it’s worth, I thought that MP Dirge was the best of TakaraTomy’s Conehead trio by some mile. Ramjet and especially Thrust both had their share of issues, but somehow the blue boy ended up comparatively quite good overall, although it’s a funny thing to look at him again now, with fresh eyes versus Endgame. 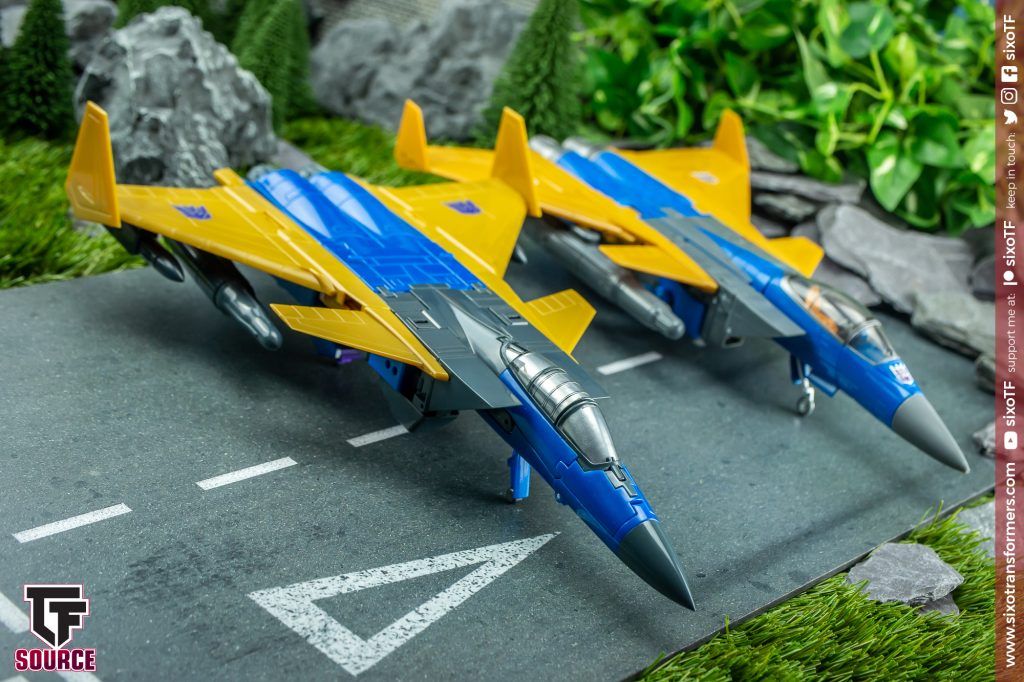 As I mentioned, the MP-11 mould has not really stood the test of time, and Dirge is a good example of why. He looks unnecessarily detailed and greebly in robot mode, and lacks a bit of polish overall (despite being better than his teammates, still), but his vehicular form is very nice all the same. By comparison, the Maketoys effort manages to score a few points in its favour, although it’s not exactly a wholly conclusive effort either, as far as vehicle form goes. 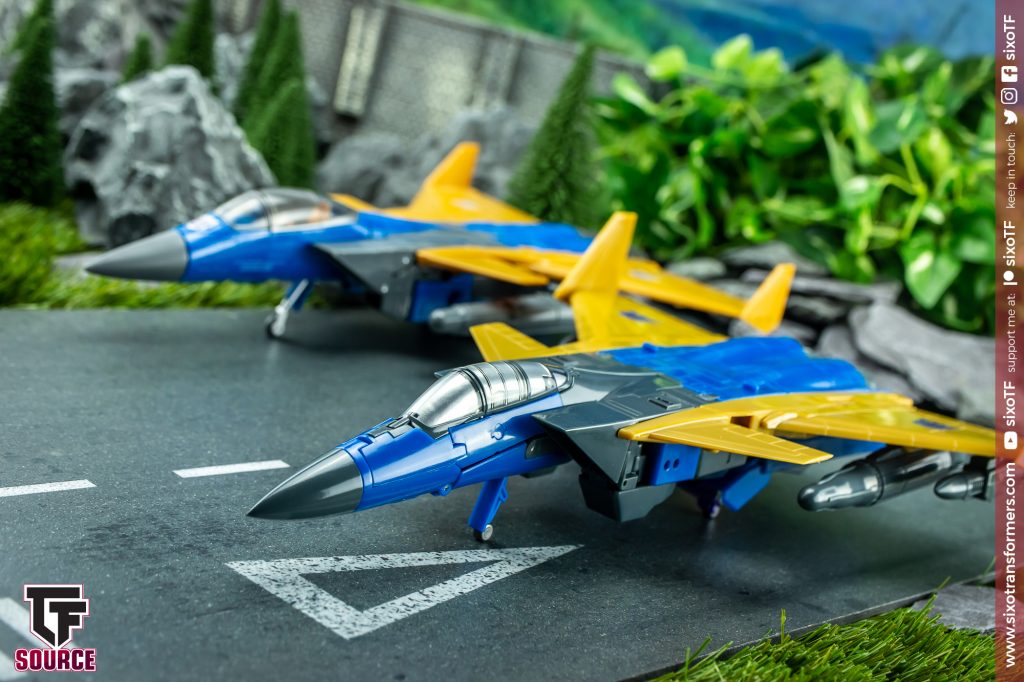 Ultimately the biggest difference here is the clear cockpit on the official effort (which I do actually like), as otherwise it would be very easy to get them confused, I’d say! Let’s see how they fare in robot form next time then, before any conclusions are made. 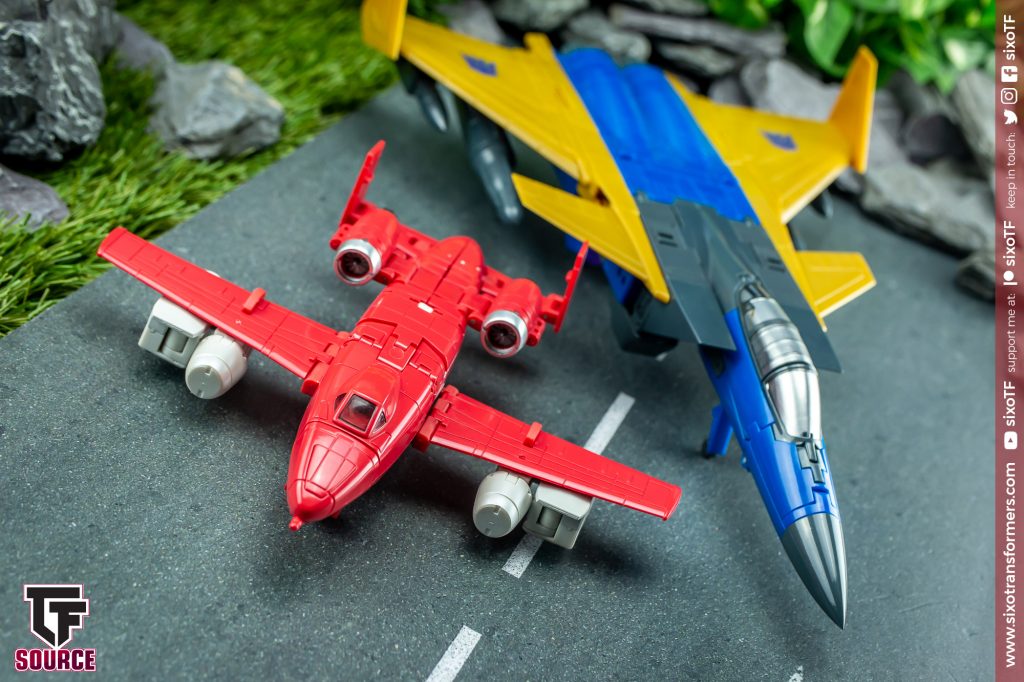 In terms of other comparisons, Endgame feels right at home with a variety of Masterpiece-styled ‘bots, as you might expect. I do kind of hope that Maketoys finish this set if only to see them all ganging up on that pipsqueak Autobot plane, Powerglide! 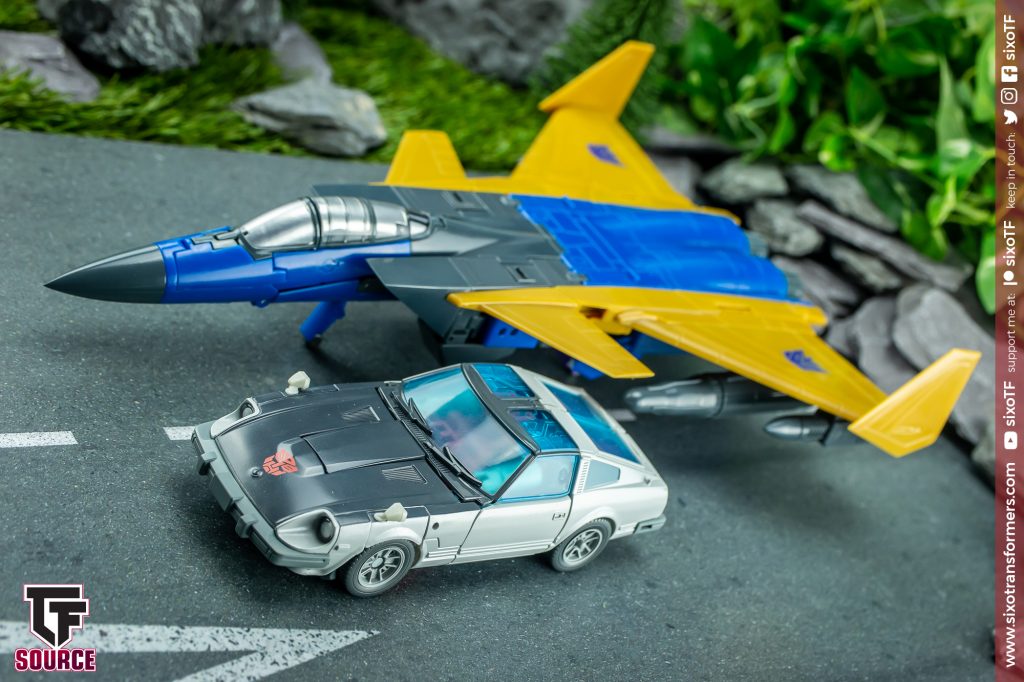 Still, even if they don’t then Endgame will remain a decent stab at the Dirge character, all the same. It may seem strange to just potentially have the one release, but hey – some Coneheads are better than no Coneheads, right? And in that regard maybe Maketoys haven’t come too late to the party after all. 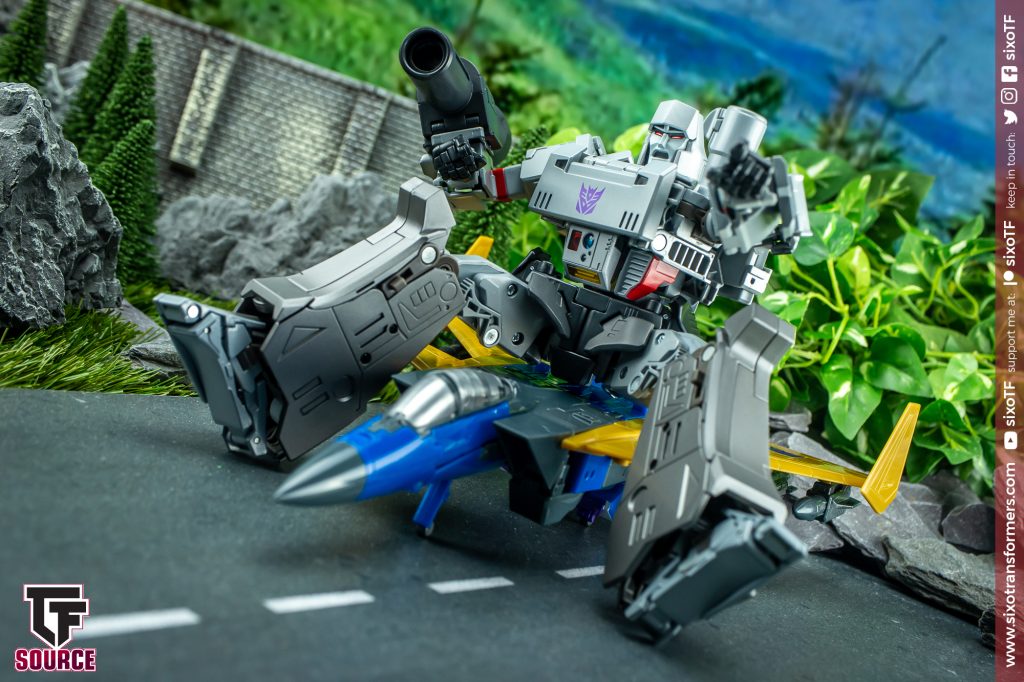 Besides, it’s not like there isn’t some fun to be had with him!

Join us next time when we’ll be talking transformation and taking a look at that robot mode.