COUNTDOWN: 28 Transformers tweets from September that need to be seen! 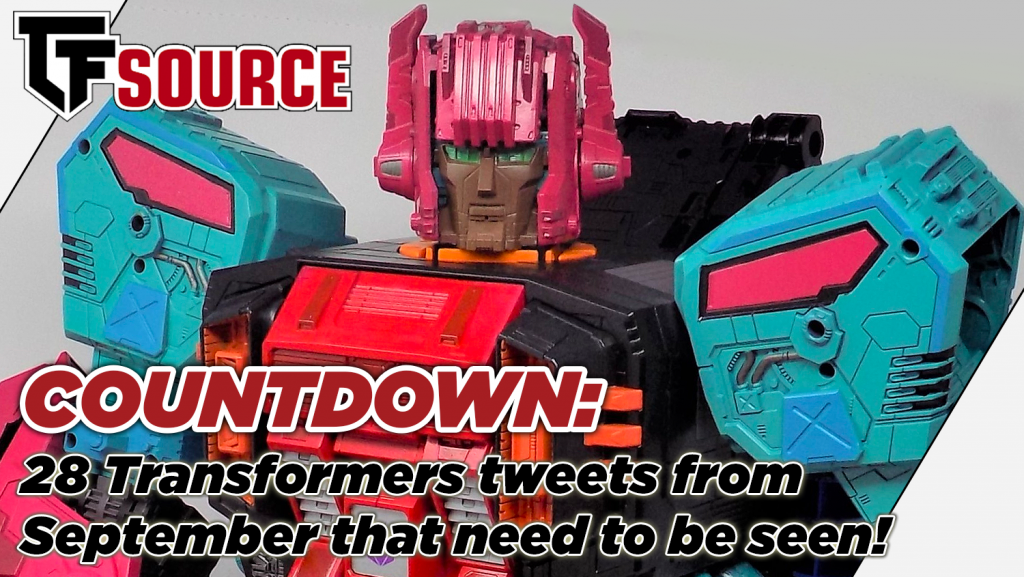 Another month flies by, eh? Before you know it, it’s going to be Halloween! 2020 may be eventful but it sure seems to be disappearing at pace. Anyway, that means it’s time to bring you the very best that Transformers Twitter had to offer up for September – all presented in date order. Have a great month!

I felt this. Every moment of it.

Well, it would answer where the trailer goes!

This tweet has me questioning everything I thought I knew.

I… couldn't resist! @glovestudios
Dear Andrew, I am no colorist — but how about this??? #Sharkticon #Transformers pic.twitter.com/jRqmA28EFy

Now that’s dedication to your craft.

oh god, are the Quintessons called that because they hang out with sharks pic.twitter.com/e5gk4wlXKX

This tweet has me questioning everything I thought I knew.

— Out of Context Transformers (@NoContextTFs) September 14, 2020

My jaw hit the floor when I saw this.

Star Convoy is complete! He is by far the most articulated figure I've designed, really happy with how much fun he is to just mess with. Convoy is quasi-legends scale (canonically he is a big boy), but really he's a bit stand alone

Sam has been posting pictures of his wonderful creation over the last few weeks, and it’s just amazing! Star Convoy done justice.

After some R&R i'm back with some more unused G1 concept art. Today we have a unused concept for a 15 piece Micromaster combiner. Each of the 3 groups of road, heavy duty and air would of been sold as seperate sets which if you bought them all would combine into one robot form. pic.twitter.com/Nk6XGaNWKZ

Got another piece of G1 concept art today. This time we have near final concept art for Overlord. The original concept didn't initially feature the Powermaster engine gimmick, the head design wasn't finalised and the base mode was more industrial without as many guns. pic.twitter.com/xDKvjRBY2b

Both of these threads are well worth a read for all kinds of bizarre G1 concept art. What could have been!

It was quite the month for leaks. This tweet brutally sums up how it was.

Every time Richard (otherwise known as OptimusTimelord) drops a new gif, I’m just in awe. Look at this!

I got to work on this Cheetor! I love Beast Wars and I loved this character (even though I find him pretty annoying now, rewatching the show as an adult). Tail weapon homage to Transmetals form! https://t.co/v4k8oPBeIC pic.twitter.com/chR4h1XrU1

A rare peak behind-the-scenes from one of the creators of the new Kingdom line! Great job!

Oh hey, remember that time Optimus was an alligator? This sums it up perfectly.

2020 was the year that major news outlets got school on what to call different versions of giant robots.

Face down ass up washed up on the beaches of florida pic.twitter.com/rJYe0jitkQ

Who knew this was a recurring theme?

I have found THE BEST accessory set for MP-scale Transformers. pic.twitter.com/5Zh1VQJHzr

Shut up and take my money.

— James Marsh but like a vampire or something (@Jamesotron) September 28, 2020

Did I mention stunning artwork? Oh, here’s some more!

Transformers fans seeing G1 with no change again for the 10th time pic.twitter.com/KNPei7MAo5

I feel distinctly called out.

This is only real reason I own any Transformers: pic.twitter.com/RDOcW08nZh

You lot are a thirsty bunch, ain’t ya?

Gotta love Hasbro acknowledging the debate and not giving anything definitive in their eyes. #Transformers pic.twitter.com/VtQb7V48xl

OK, I had to laugh at this. If nothing else it proves two things – Hasbro knows a lot about the history of their IP *and* they know their audience. Well played.

The Masterpiece Beast Wars releases are shaping up to be some of the most cartoon-accurate endeavours we’ve ever seen in toy form, as beautifully demonstrated here.

No caption I can give you is better than the reply to this tweet from @DevinKelly20 which says, “A Transformer that actually takes your credit card number is a little on-the-nose.” Indeed.

You’re at your best when when the going gets rough! You’ve been put to the test, but it’s never enough!

So that’s our list. Did we miss any other great Transformers tweets?

COUNTDOWN: 28 Transformers tweets from September that need to be seen!