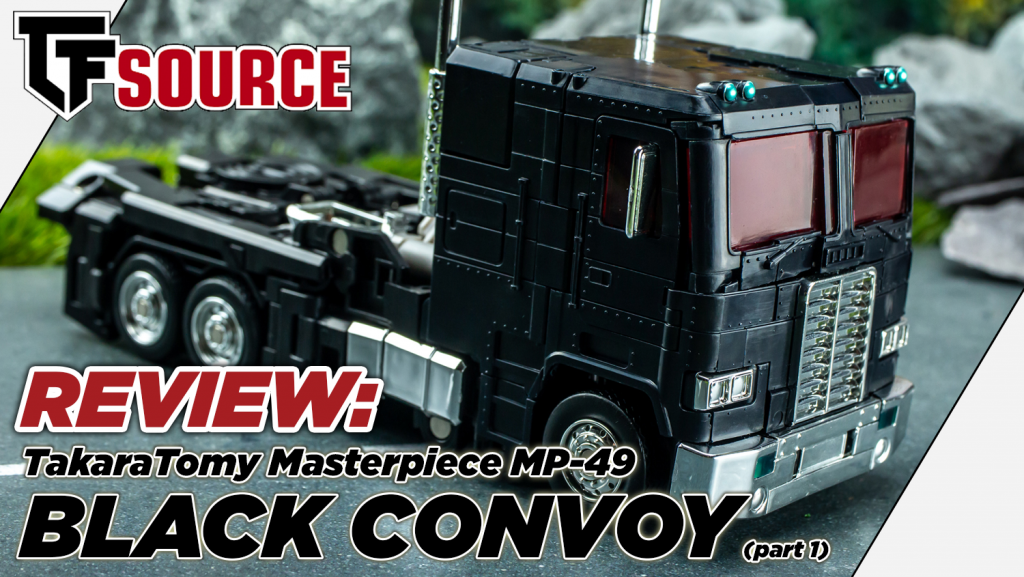 It’s a weird time in the TakaraTomy Masterpiece line at the moment, huh? After all, there’s been a significant shift in overall aesthetic over the last few years or so (don’t tell me you haven’t heard about it!), which has stirred up a bit of debate, to say the least. 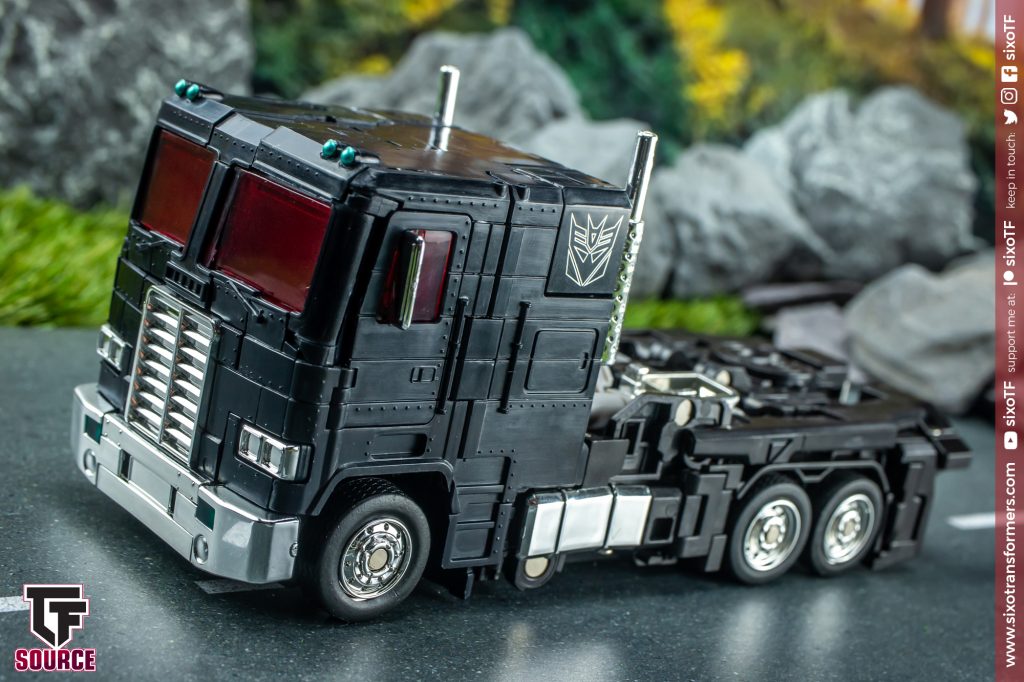 As well as lurching ever-more towards an ultra-slavish form of cartoon accuracy, the designs have also become noticeably more intricate, hugely upping the overall parts count and cramming in more features than ever before. Of course, with that has also come a rather eye-watering price hike in a lot of cases, which I suppose is what brings us mostly up-to-date with the recent MP-44 Convoy. 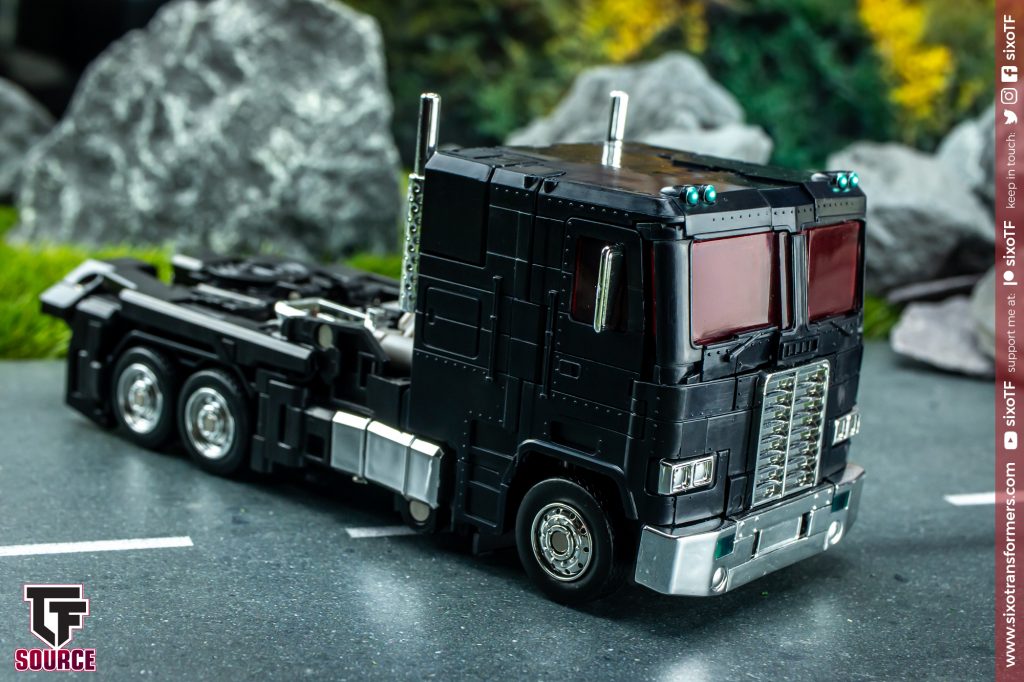 When MP-44 debuted, it created all kinds of love and loathing online for all of these reasons, and really, it’s not hard to see why it was perhaps a little divisive. Many didn’t understand why the figure was notably more expensive than the likes of its predecessor, MP-10, and even more questioned the need for another Masterpiece Optimus Prime design to begin with. 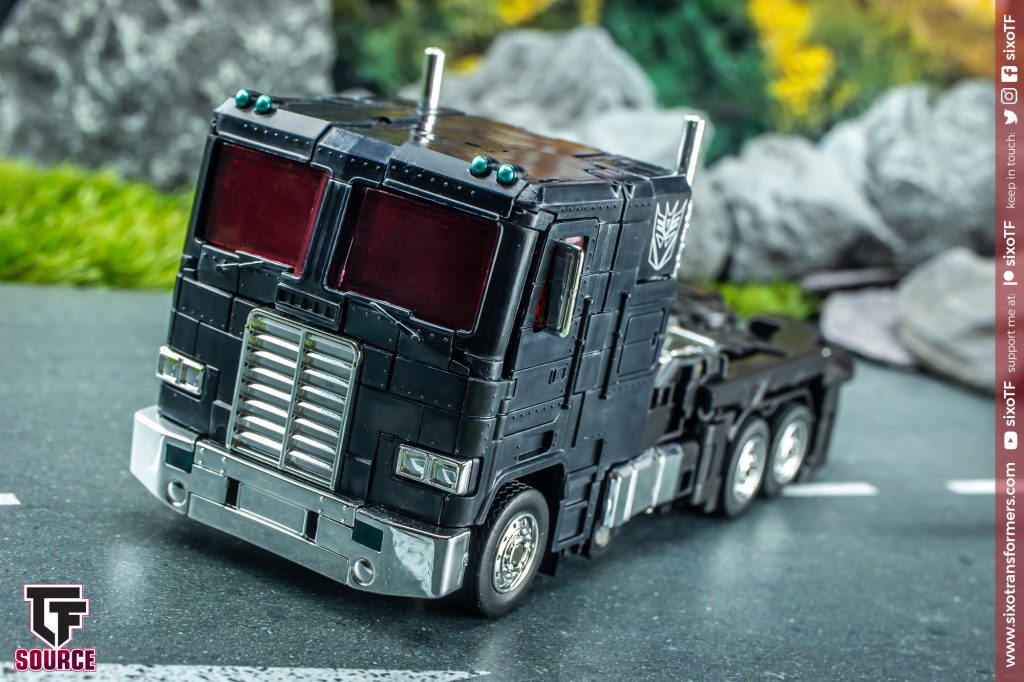 As it turned out, the toy was quite simply stuffed to the gills with gimmicks (seriously, just check out the article we did on it!), and proved that it was quite a bit of fun in hand. However, there were also concerns about paint chipping and the like, particularly during that rather labyrinthine transformation sequence, and it was mooted more than once that some collectors might prefer a simpler option, stripped of many of the accessories and other gimmicks, and with a more durable finish. 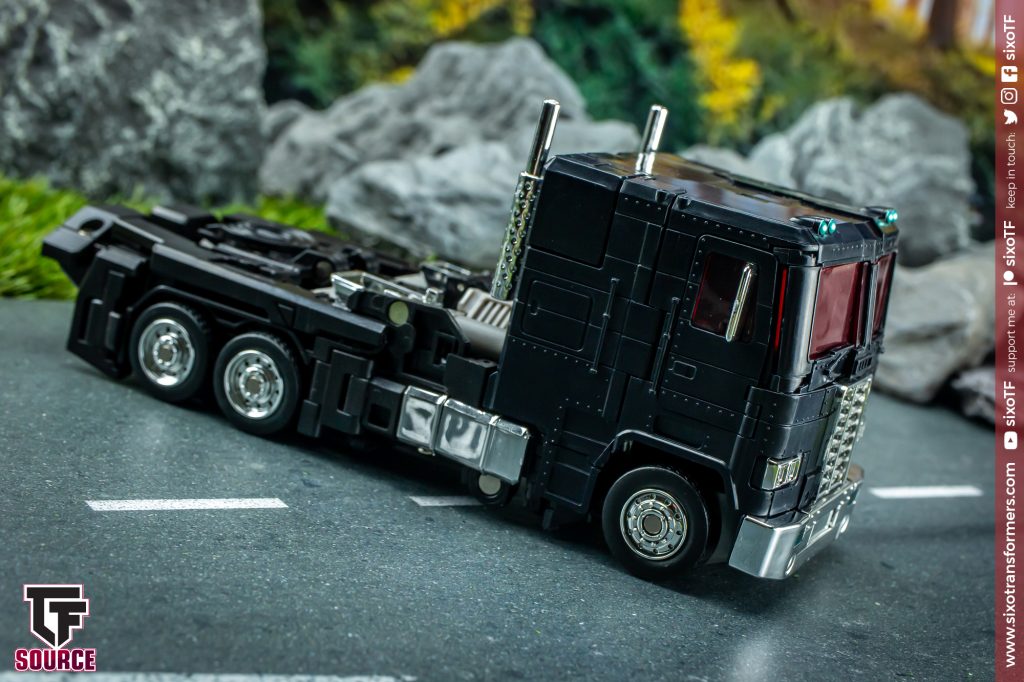 Which, rather long-windedly, brings us to today, and MP-49. You see, this “Nemesis” repaint of the mould ticks most of those boxes. Gone is the trailer section which made up more than half of the MP-44 box contents, with all its complicated features & the what-not. Gone are most of the other accessories such as the Starscream head, battle damage parts and jetpack. And gone is the thick layer of paint that adorned MP-44’s body, leaving you with a rather simplified black repaint at a relative fraction of the former price (though he’s still not cheap, mind!). 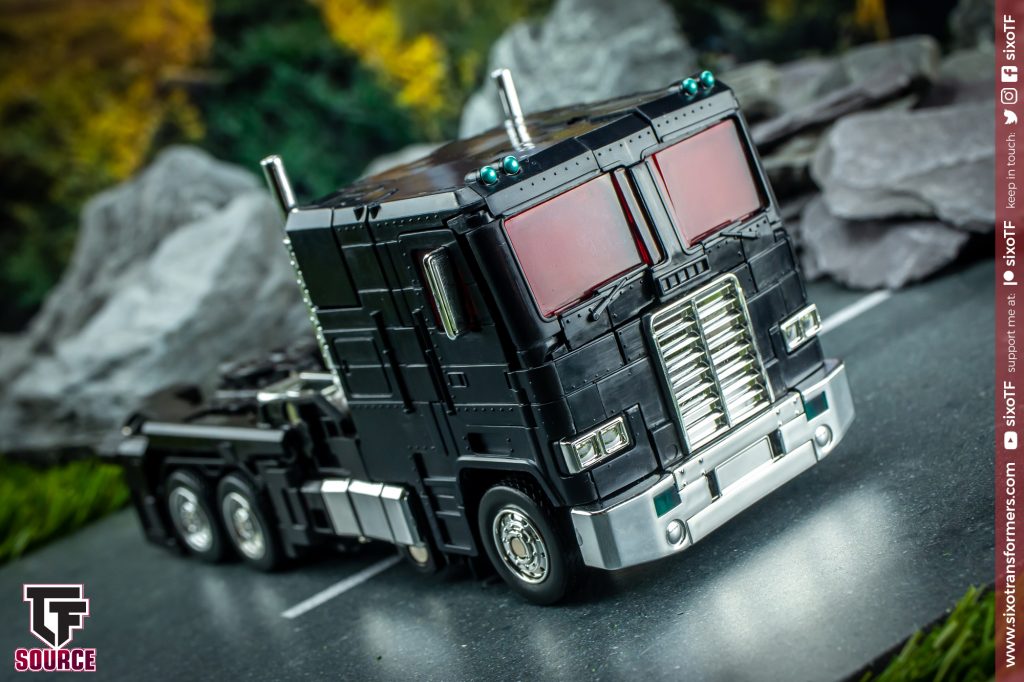 So, is the result worth it? Well, I have to admit that I was skeptical to begin with, and that’s coming from someone who owns every current version of the MP-10 mould, no less. Something about photos of MP-49 made it looks a little unremarkable somehow, and the idea of going over such an elaborate design yet again seemed like maybe it would be a little laborious. Then he arrived in hand. 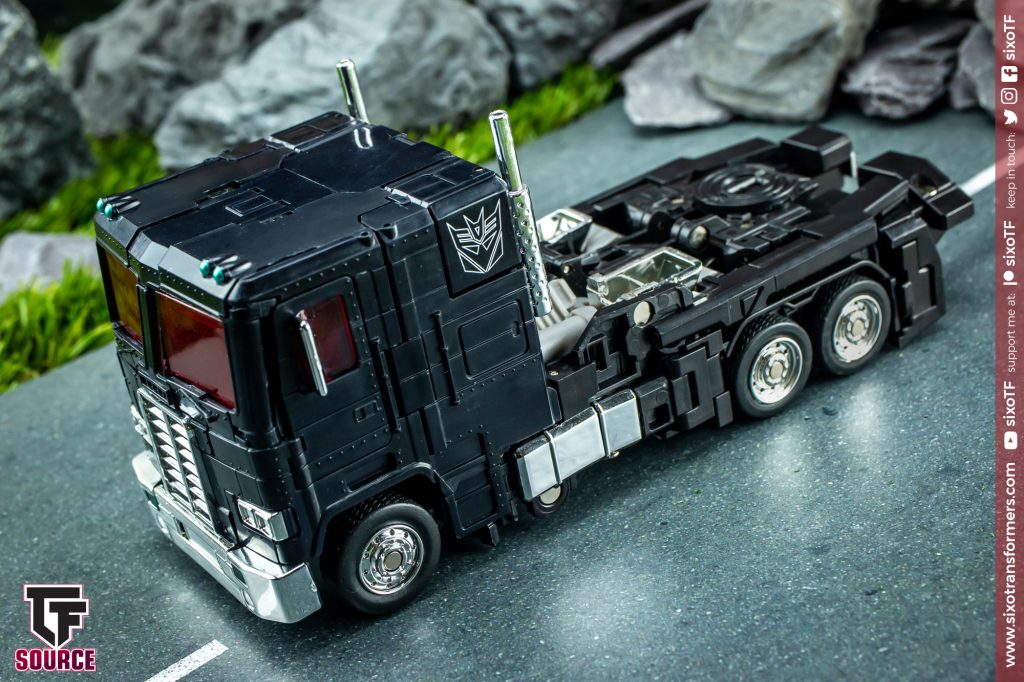 Suffice it to say, I’ve had a lot of fun with him. Since first unboxing him on camera, I’ve had the opportunity to transform him back and forth a few times over (the first times I’ve been tempted to repeat the process since I first handled MP-44!), and you know what? I actually really enjoy it! Yes, it’s a complicated design, but it’s also intensely clever and pack full of simply marvellous engineering! 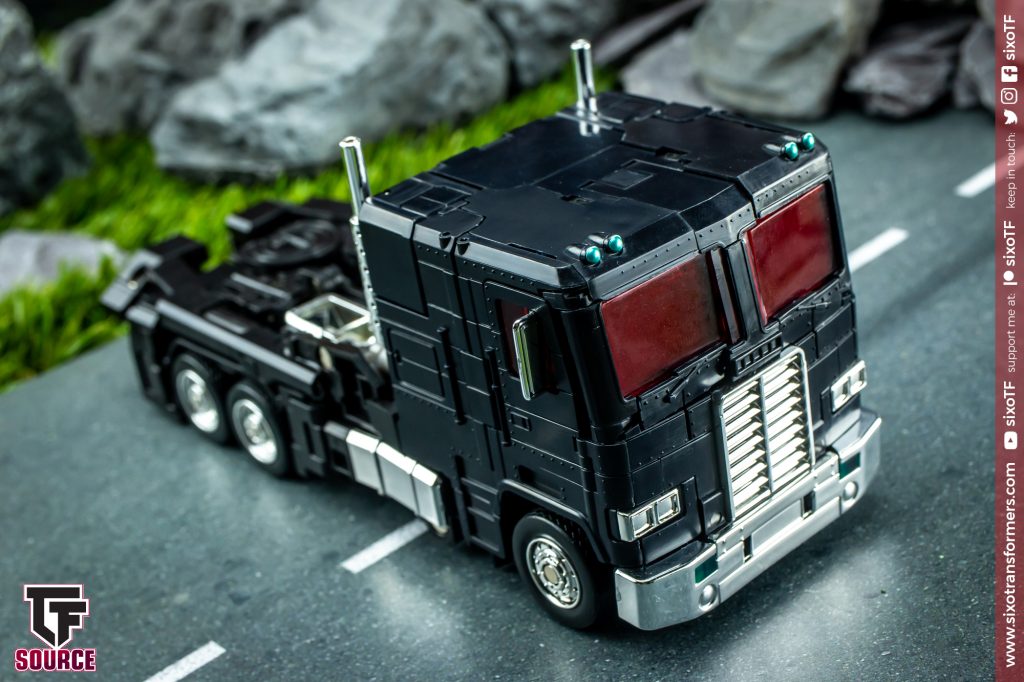 The truck mode presents beautifully right out of the box. Sure, the unpainted finish is quite notable in hand and I think ultimately does detract slightly versus the exceptionally polished look of his mould-mate, but at least the nervousness about scratches or other damage is gone. If anything it allows you to relax a little and handle this guy without the kid gloves, so that’s something. Besides, he still looks pretty neat, all the same. 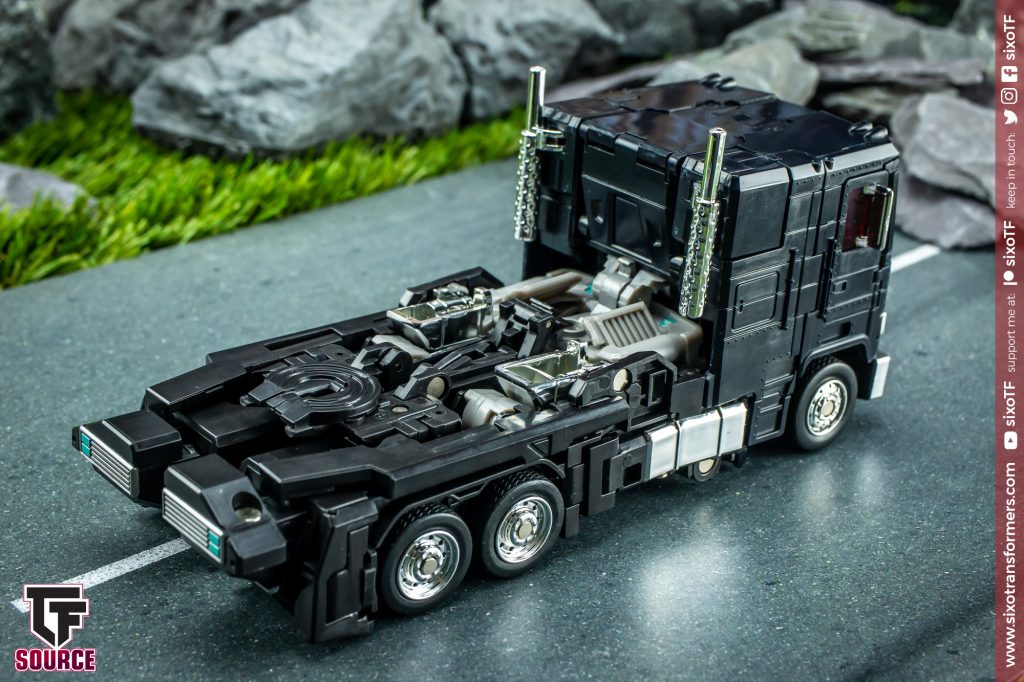 And hey, it’s not the tidiest design from a rear view (something which is no longer hidden with the absence of the trailer), but overall there’s a lot to like about this form. Dare I say, I might even prefer quite a few aspects of it to my beloved MP-10, such as how neat and tidy the front half looks. 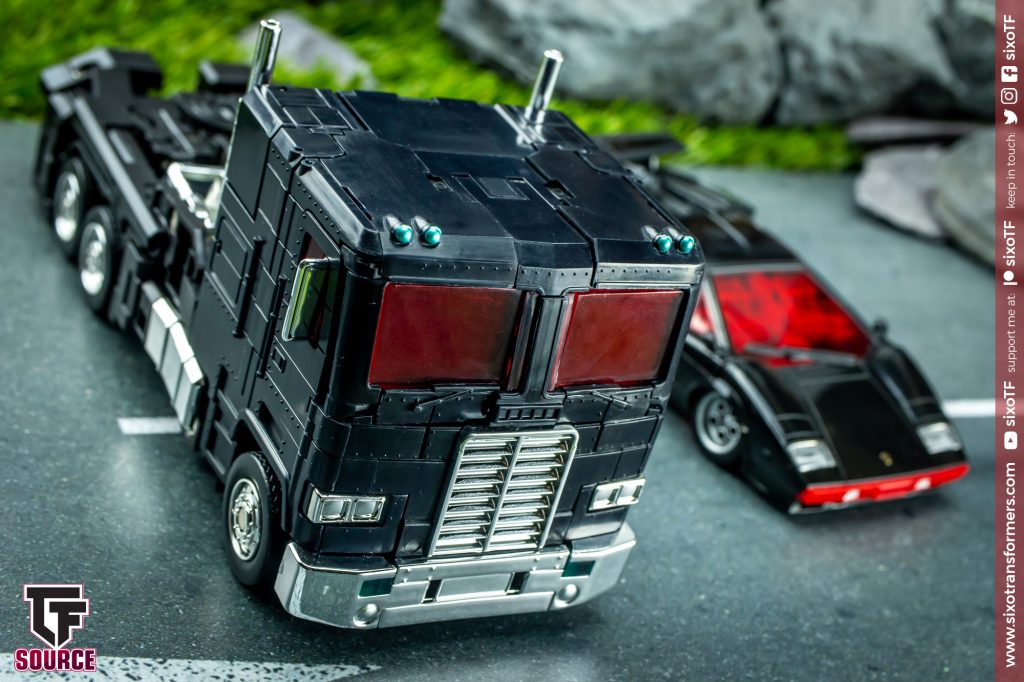 Besides, there are aspects of the finish that work well. I love the blinging chrome he’s boasting, and the red tinted windows also look good in hand, even though it’s a shame they’re nowhere near as vibrant as the likes of the windshield on MP-12G here. 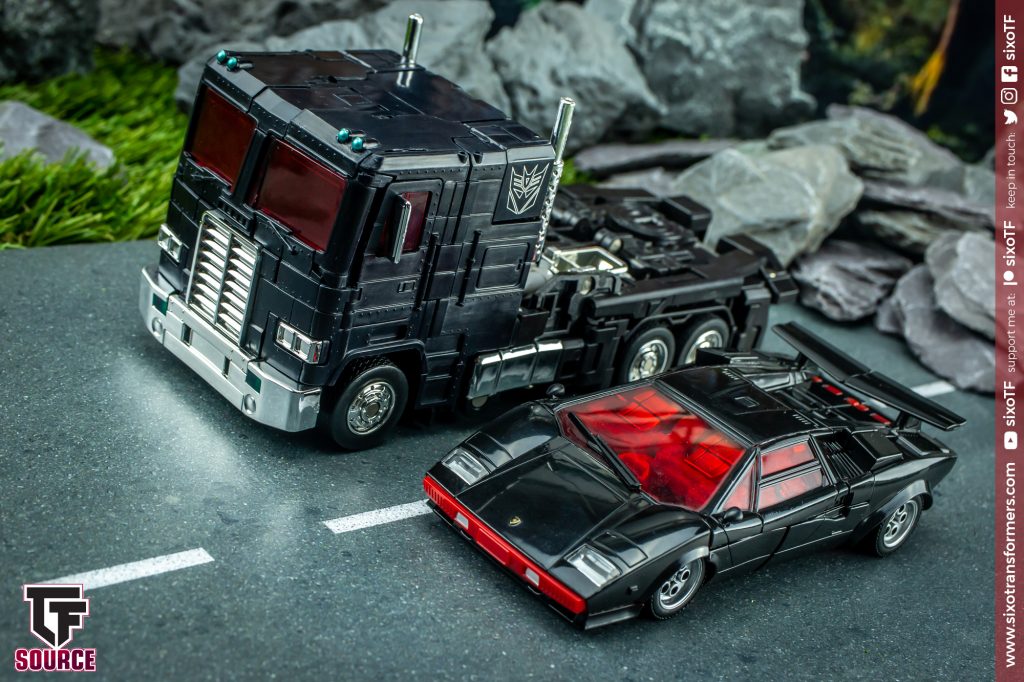 It also feels exceptionally solid overall, and tabs together so beautifully in truck mode, arguably even better than MP-44 (perhaps also as a result of there not being a thick layer of paint). Oh, and I’m just living for that hollow Decepticon logo on the side, there. 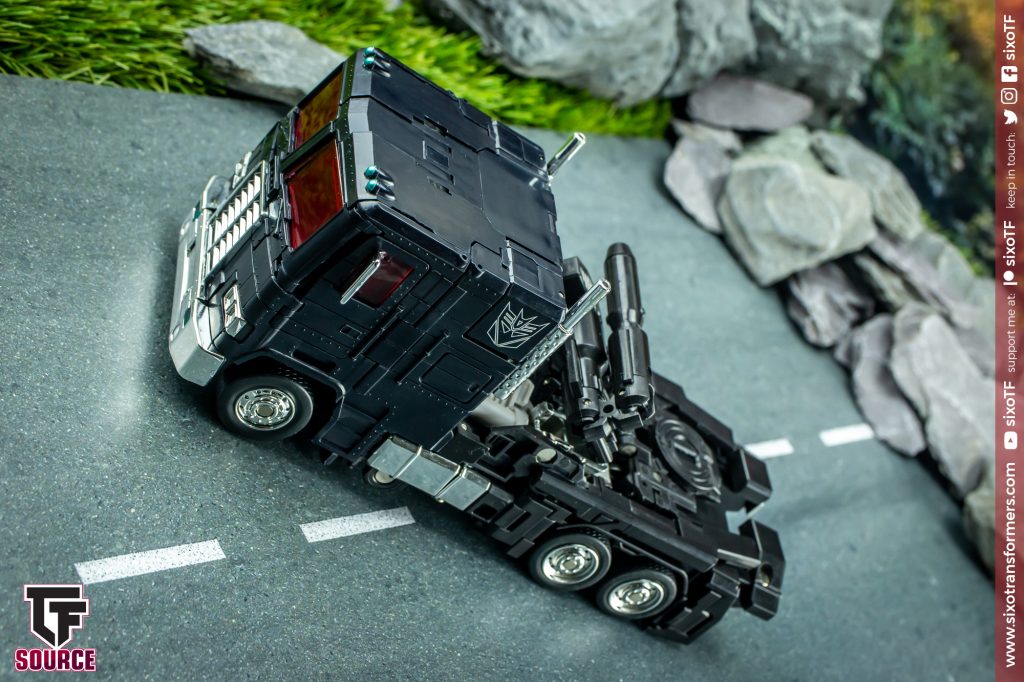 There are still some gimmicks to mention too, mind. As with MP-44, you can bundle up his blaster and store it on the back of the truck section, should you wish. It’s not the most elegant weapon storage I’ve ever seen but it works well enough. 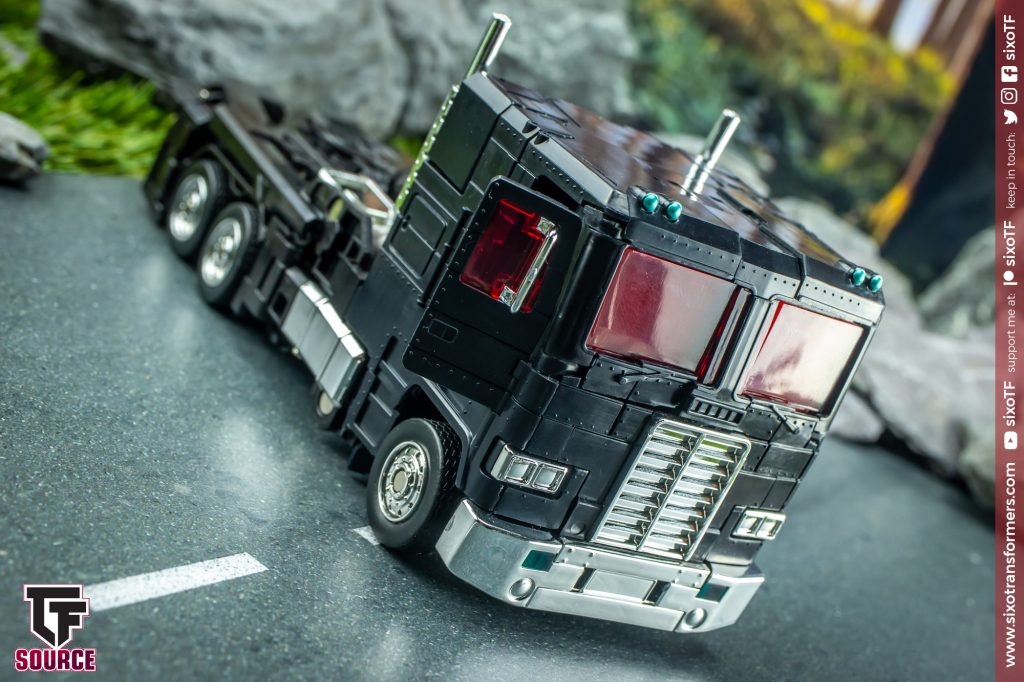 Then there are the opening doors which don’t reveal any kind of interior to speak of, but make for a welcome feature all the same. Of course you can seat the human mini-figures from MP-44 inside the cab, should you wish, but frankly I’d rather eat my own eyeballs than go through that process again! 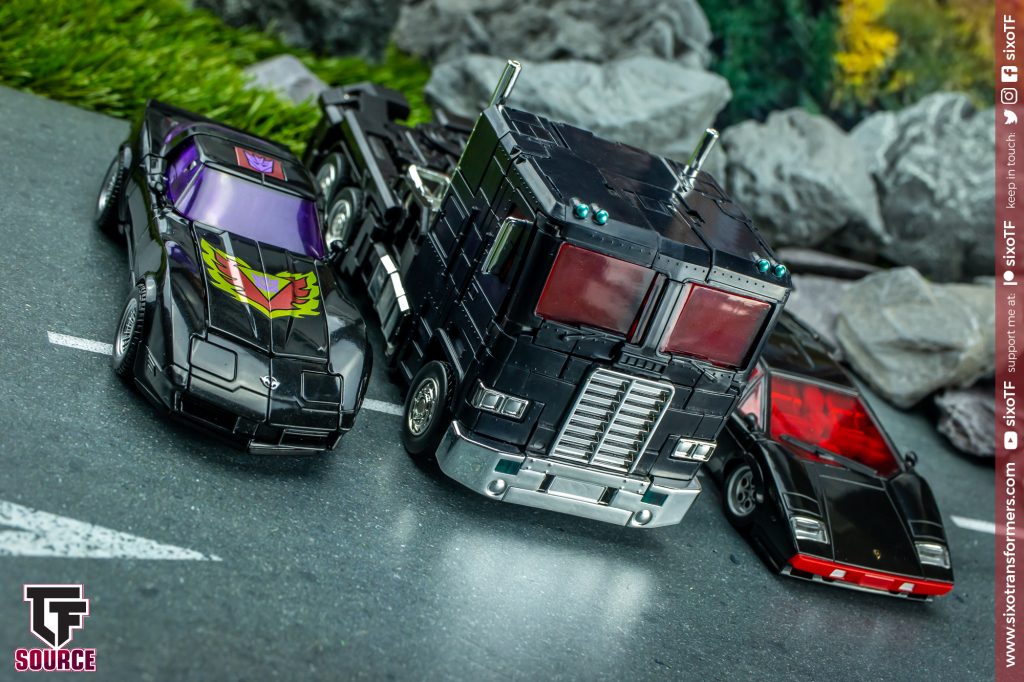 Otherwise, he does look pretty nifty alongside some other black Masterpiece repaints, of course. If anything he kind of makes me wish that there were more of them! 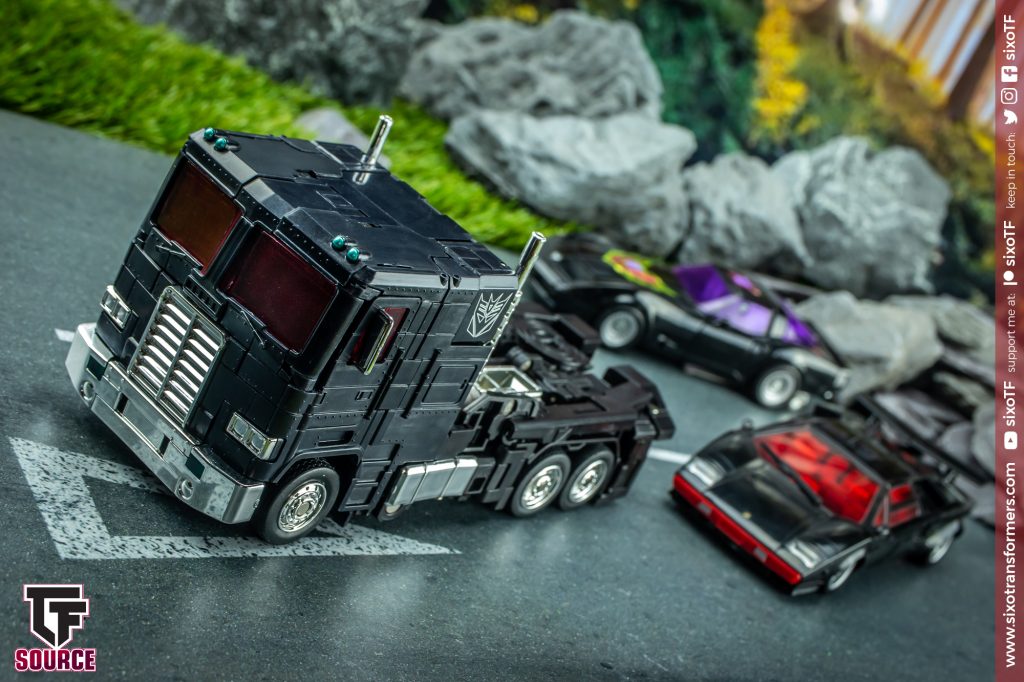 Even as a standalone piece though, there’s a lot to like here. Whilst the package may be simplified quite a bit, I suspect that it may be a welcome solution for a lot of people who passed on the original release for this design. 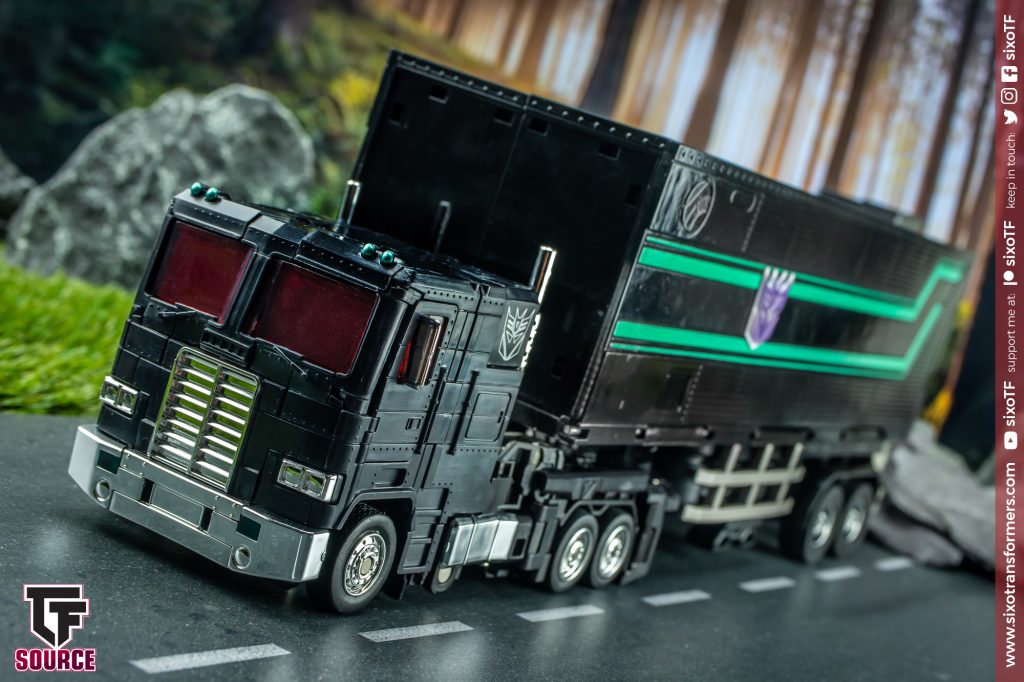 It is kind of a shame to see him without a trailer, but it’s an understandable adjustment if it means keeping the overall price down to something at least approaching a more reasonable level! For now at least, I’ve been having fun decking him out with this KO trailer which was made for the MP-10 design, if only to see what I’m missing! 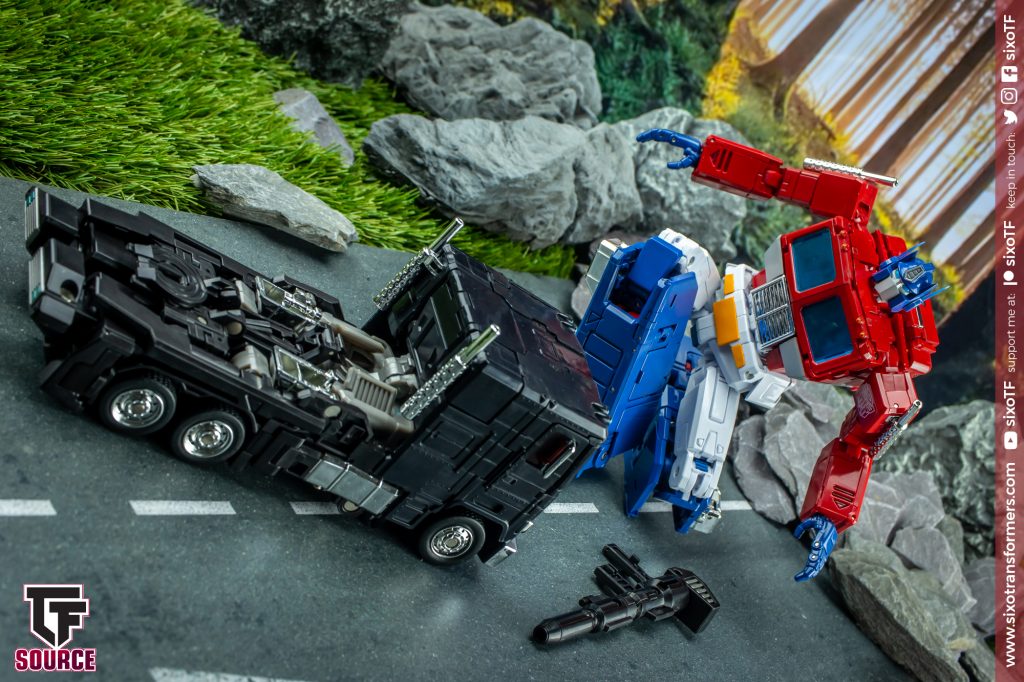 Of course the big comparison is always going to be with MP-44, and it’s remarkable to see how different these two feel in hand despite not having any actual moulding changes, as far as I’m aware. 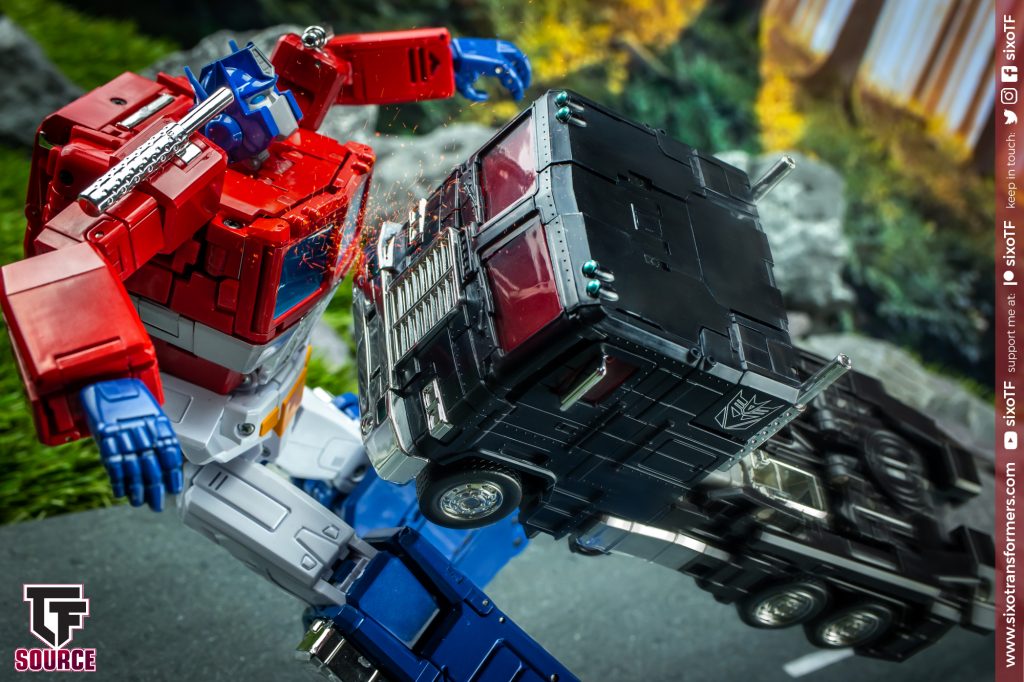 Join us for part two when we’ll be doing a full comparison between the two, as well as talking transformation and robot mode.