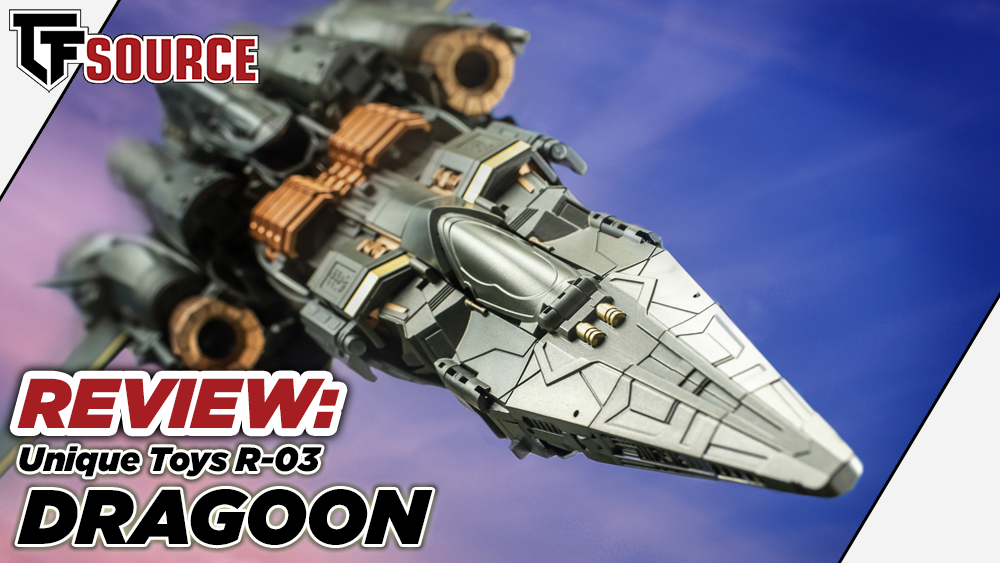 Unique Toys have formed a bit of a niche in their more recent output. Along with sister company, DX9, they’re focusing heavily on MP-style representations of well-known Movieverse designs, and seem to be taking on some of the more challenging characters when it comes to how they transform between modes. And you know what? I’m absolutely here for it. 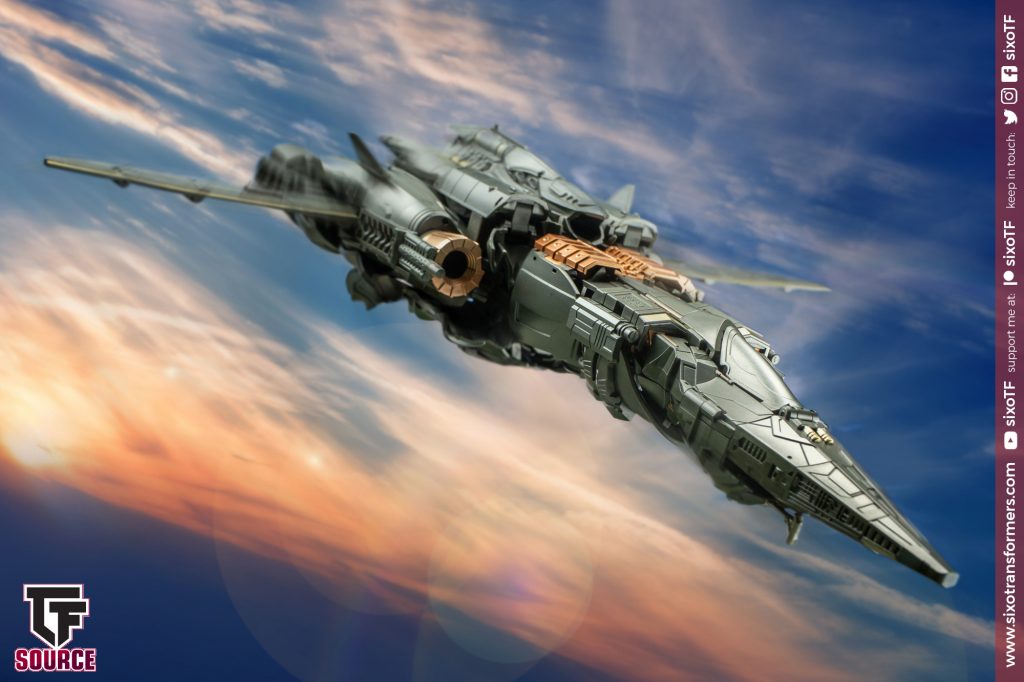 After all, every effort they’ve made in this vein so far has been a bit of a knockout. Peru Kill? An unprecedented take on Lockdown with an inexplicable transformation scheme. Challenger? Currently *the* Age of Extinction / The Last Knight Optimus Prime to beat in MP-style. DX9 La Hire? Just see my own recent review as evidence of how wonderful it is. They keep putting them down and I can’t wait to be picking them up. 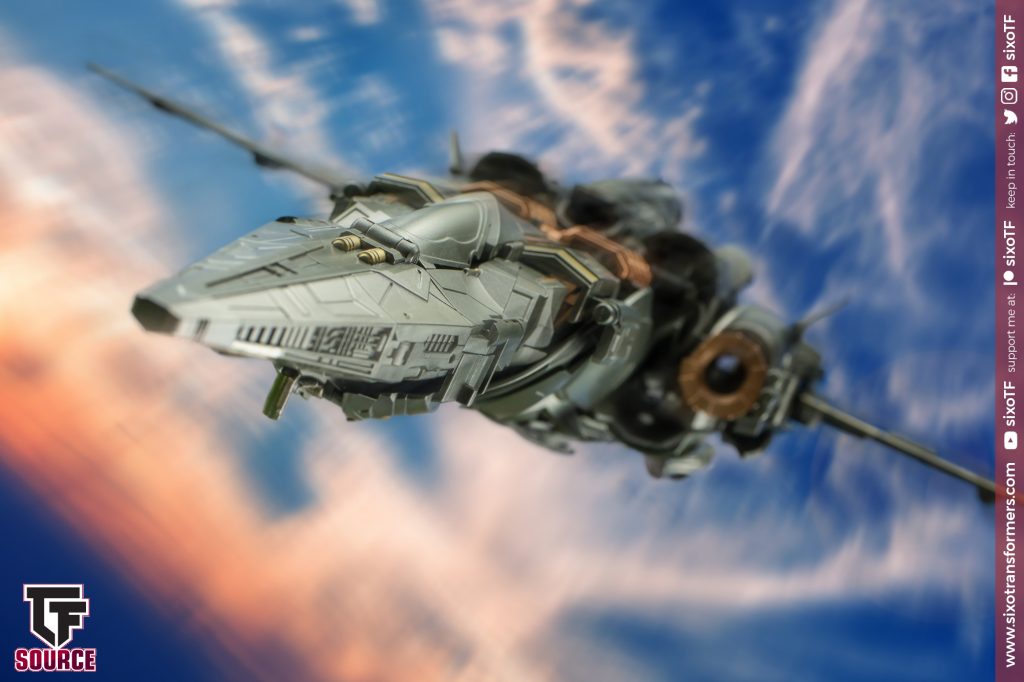 They’re not showing any signs of slacking off either, with Nero, a take on AOE Galvatron on the way too! It already shows all the signs of having the same unfathomable conversion between its two modes (assuming, y’know, that they didn’t invent “transformium”, like in the film itself…). Truly these are blessed times for Bayformer fans. 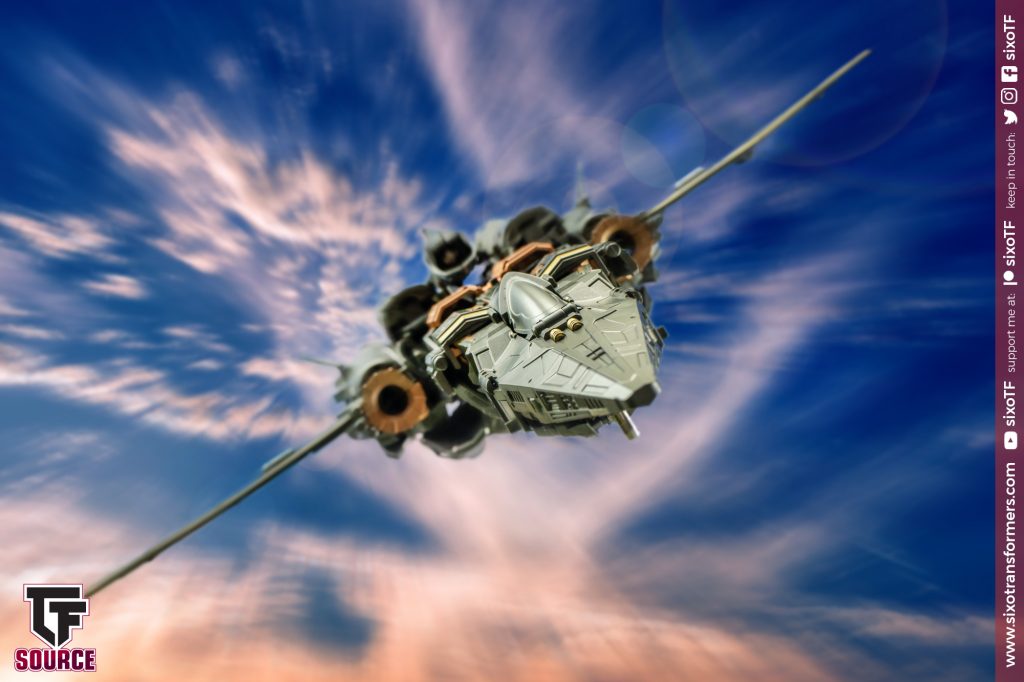 I say “Bayformer fans” lightly, as there are plenty of us who appreciate the look and design of characters such as these without having any particular fondness for the movies themselves. It’s all a matter of opinion of course, but on a personal note I found The Last Knight to be about as enjoyable as eating my own shins. That doesn’t mean I can’t think the robots look cool, however. 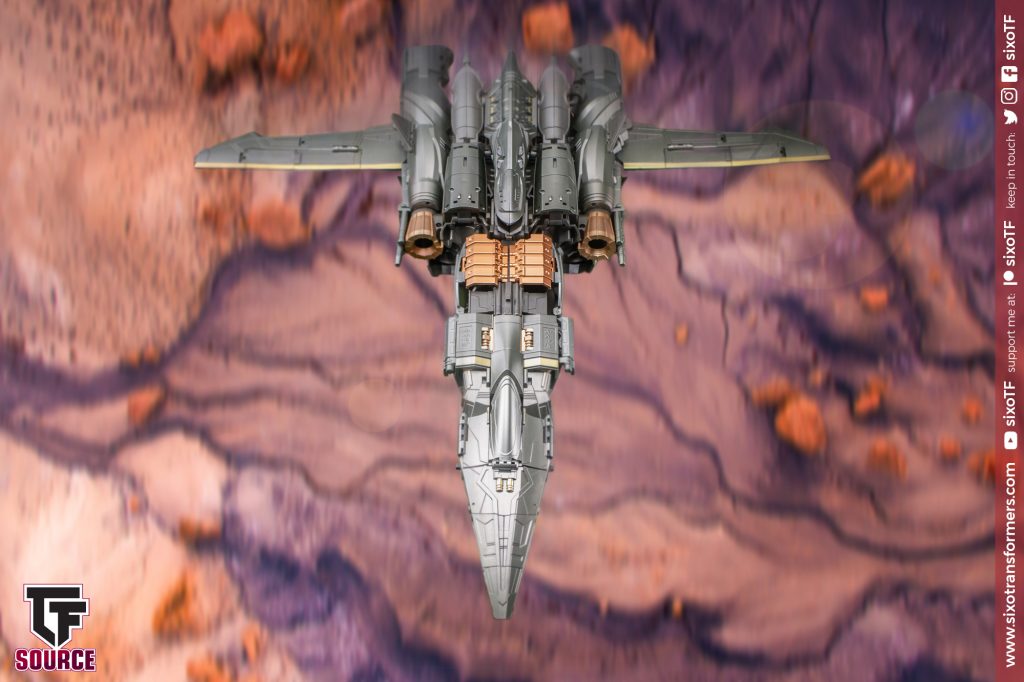 All of which brings us to this point, where today we’re taking a look at the highly-anticipated Unique Toys Dragoon. It’s the company’s attempt to bring us a screen-accurate rendition of Megatron from the current final film in the main series (pre-Bumblebee, anyway), and boy, does it ever arrive in style. 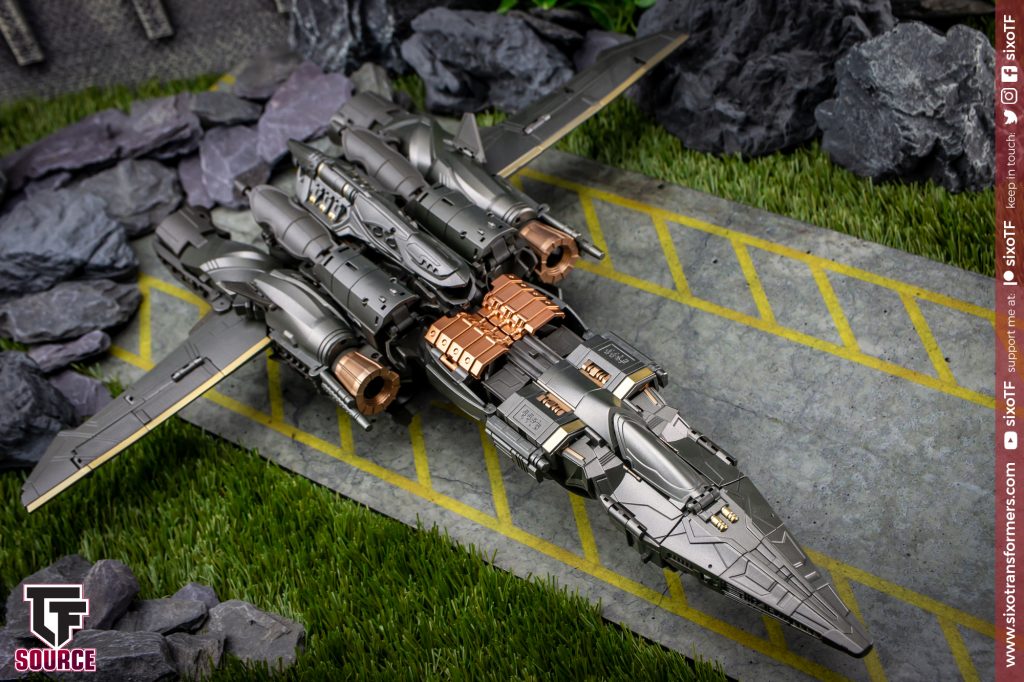 Right off the bat that jet mode is a thing to contend with. I mean, just look at it! Firstly, it’s huge, boasting a wingspan that makes you sit up and take note. Second, it’s flipping gorgeous. 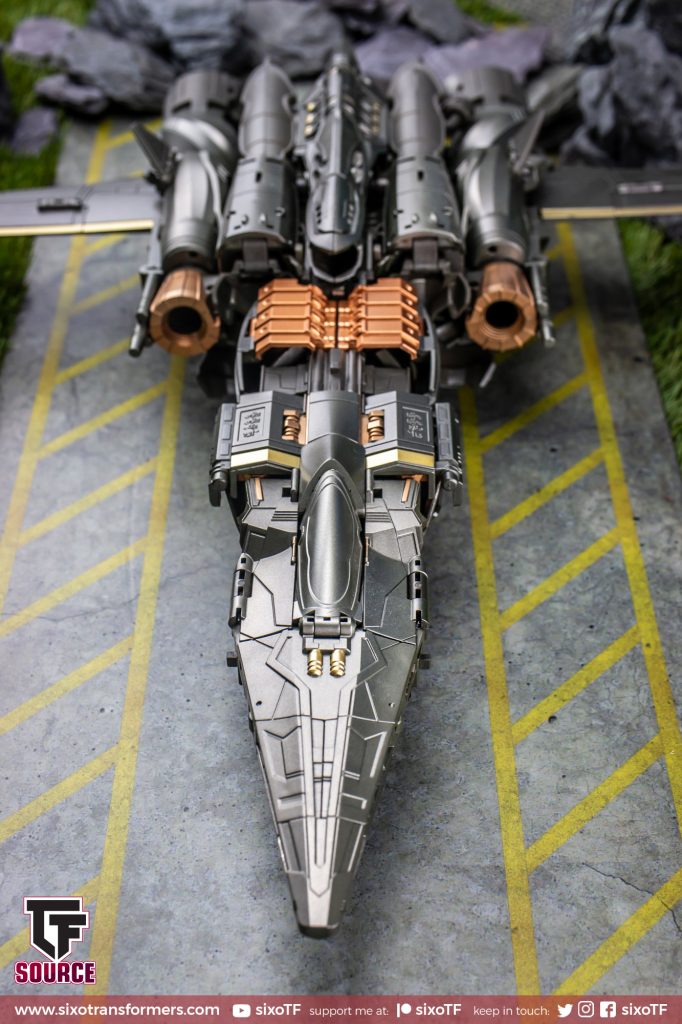 Get a load of that. There’s a surprising amount to unpack and take note of here, especially when you consider that this is, after all, a fairly monochrome jet form. It just happens to be one that’s loaded with detail and finished to a really satisfying degree! 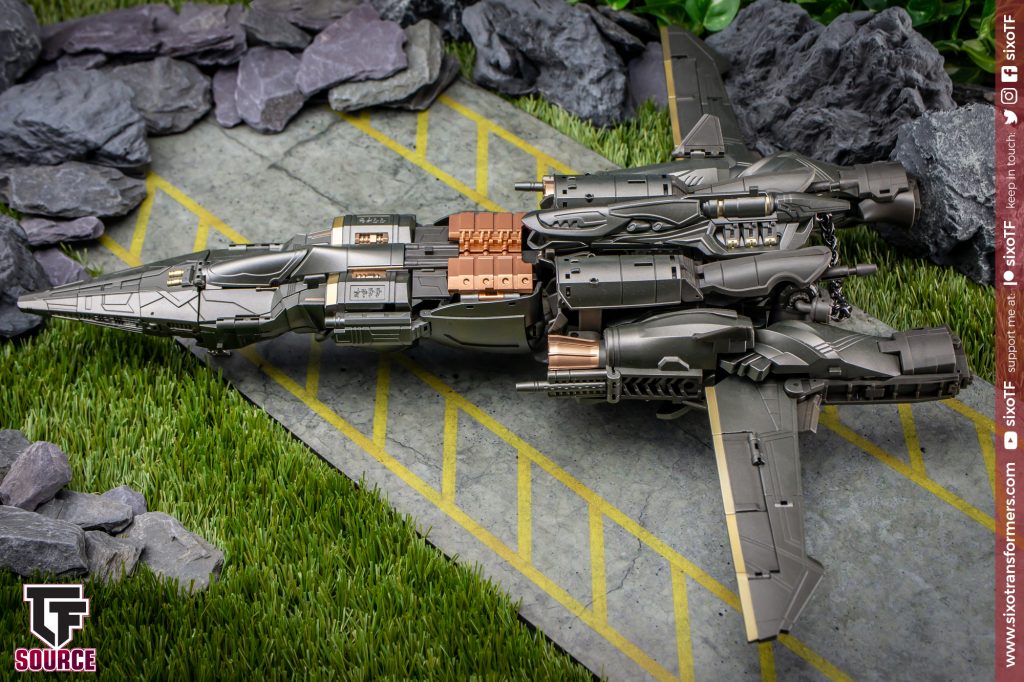 It’s also quite a tidy affair overall, which is saying something considering the source material on which its based. I say that not in any way derogatorily, but in an attempt to acknowledge that a lot of live action designs can be rather overpowering to look at, and especially the ones that are of inherently alien origin like this one. 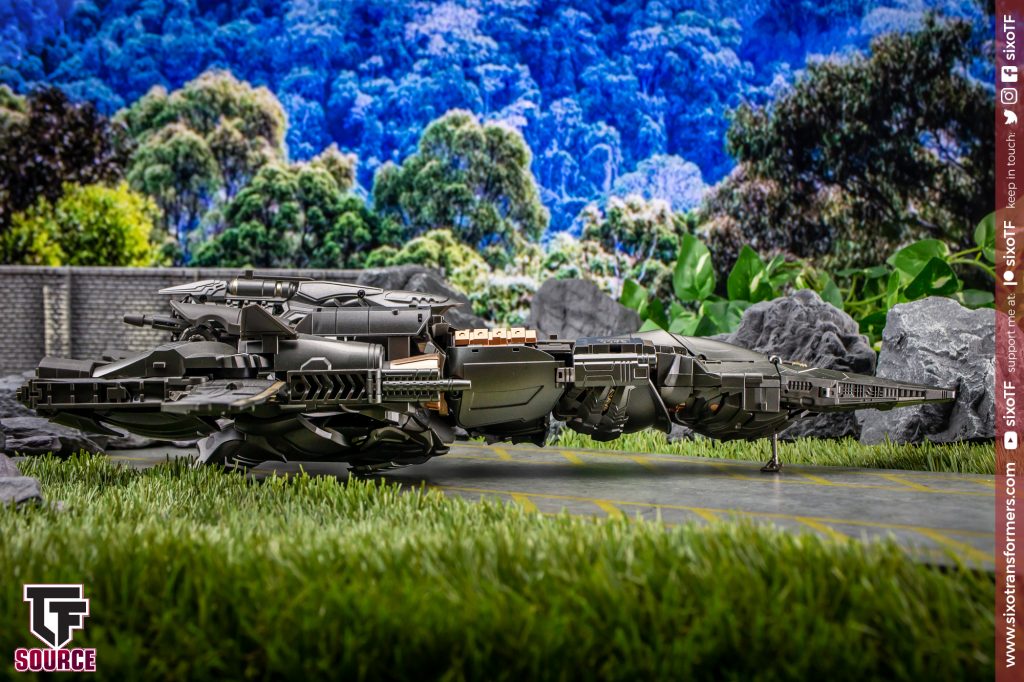 All credit to Unique Toys then, as they’ve done a marvellous job at keeping things relatively simple here, at least in terms of appearance. Fact is they’ve also managed to pack in a lot of moving parts and impressive design beneath the surface, but we’ll get to that in good time. 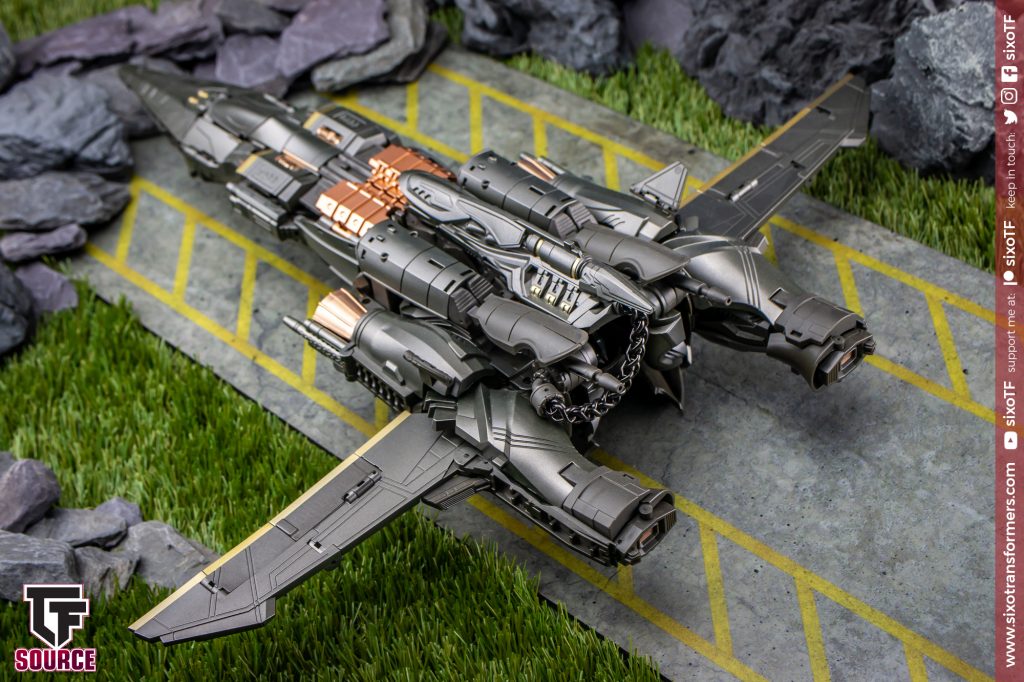 Even a rear view of this mode won’t give much away in terms of where all the robot bits have disappeared to . In fact, much like with previous designs such as Peru Kill, there’s a surprising amount that is rather devilishly hiding in plain sight, but it all blends in so well that you really don’t notice at all. 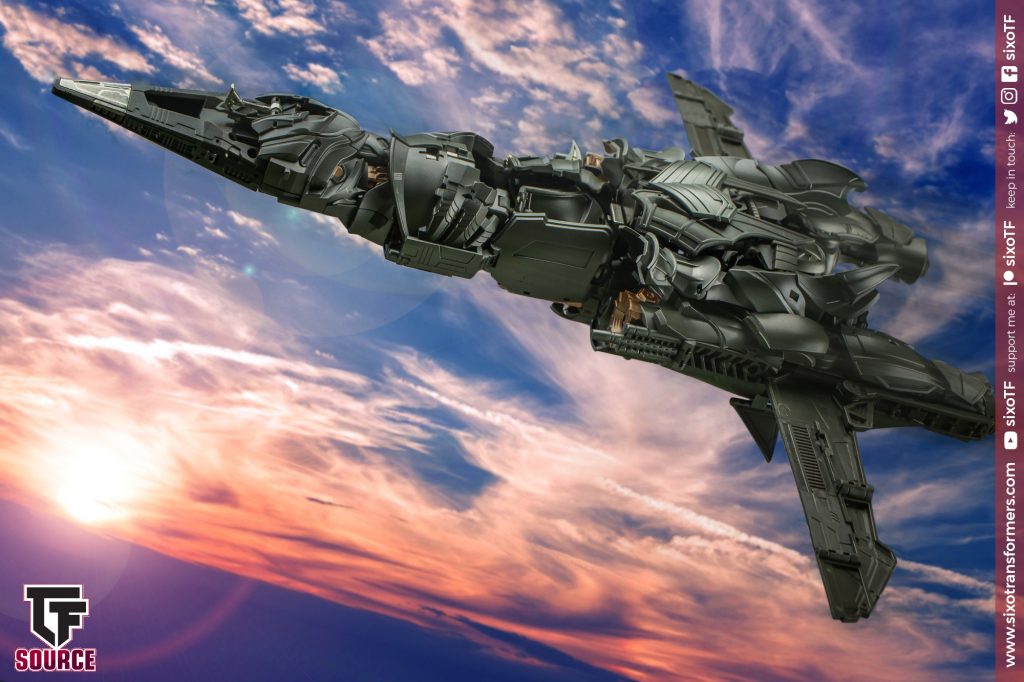 Flip the thing over and you might get your first real insight into at least some of how Dragoon transforms, but even then it’s all relatively well-kept in comparison to the underside of a lot of jet mode Transformers. I’m sure the uniform colour scheme helps a lot with that, but still. 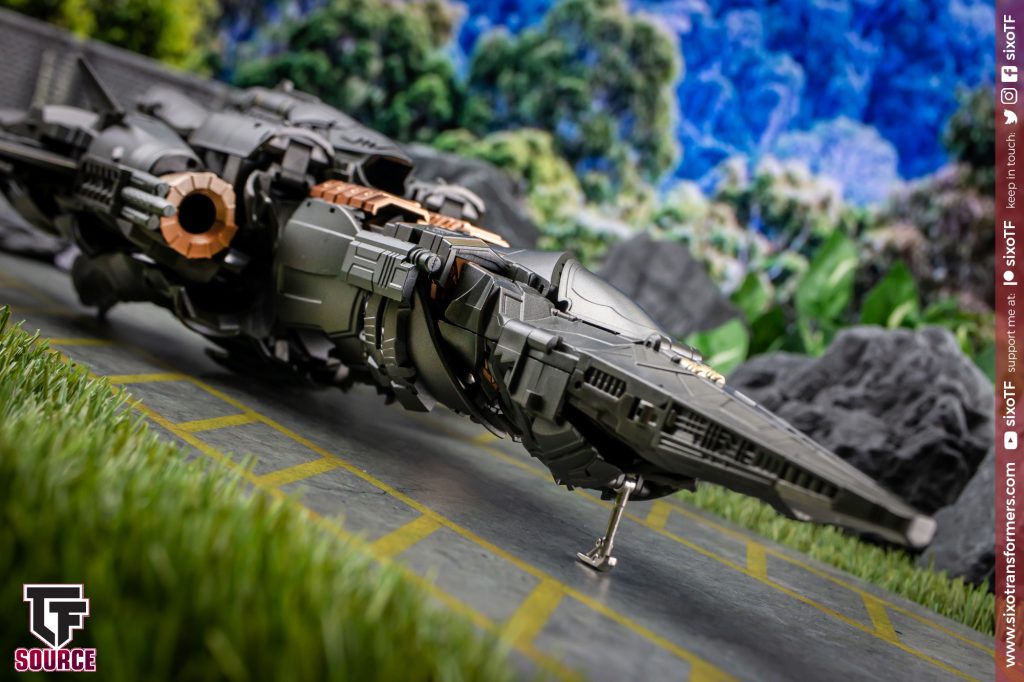 There is a sort of landing gear which consists of it resting stably on a couple of handy protruding bits at the rear and an actual attempt at some real-world flavour with a metal fold-down stand at the front. The stand is a little too obvious in the folded-up position for my liking, but it does come in handy for display, nonetheless. 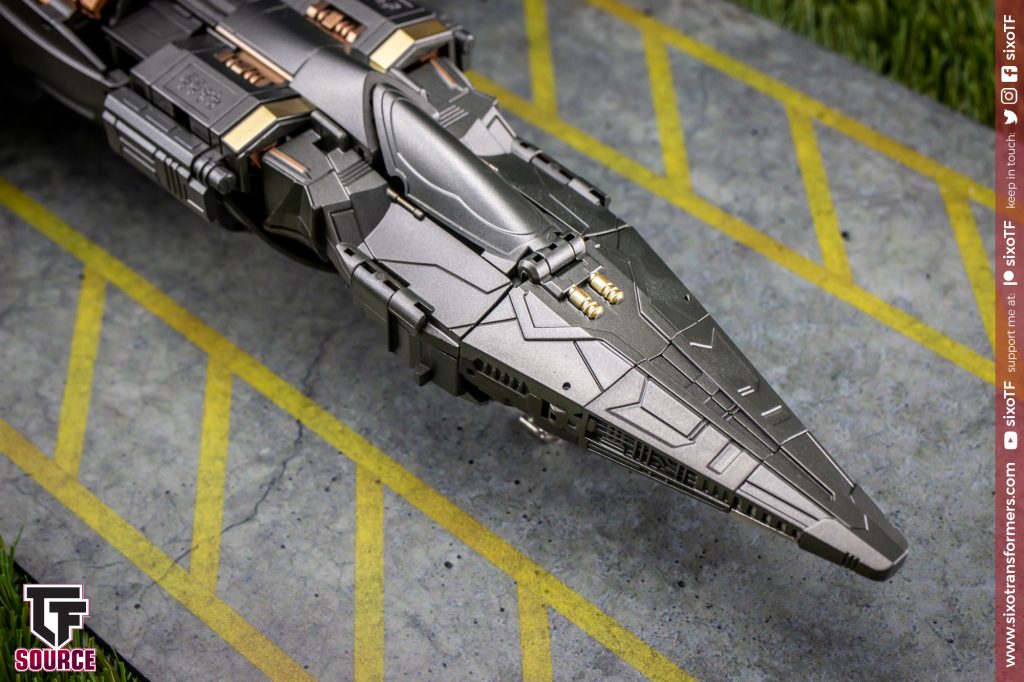 The nosecone itself has some attractive moulded detail which makes it look suitably alien in origin, and I particularly like the almost vent-like detail on the sides. The paint applications on show here all look really good too, although I would have maybe liked a little something to differentiate that cockpit from the main body. I guess it’s perhaps a bit more accurate versus his onscreen depiction this way, but it somehow looks strangely underdone when so much of the rest of this mode shines. 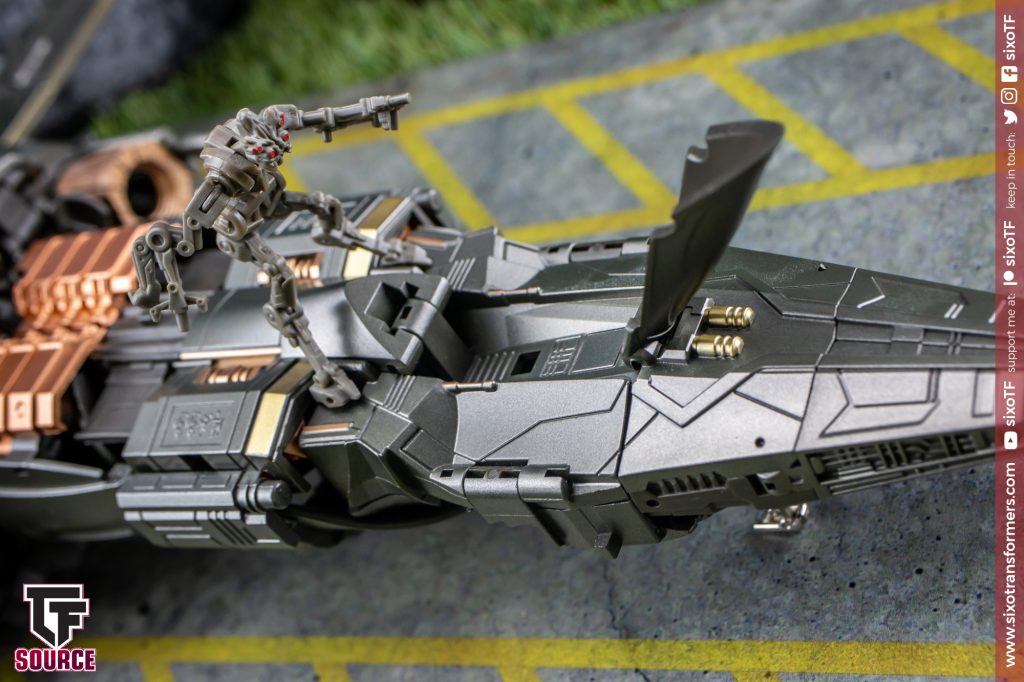 The cockpit does open up though, mostly as a result of the transformation scheme, and reveals a nod to an exterior at least. 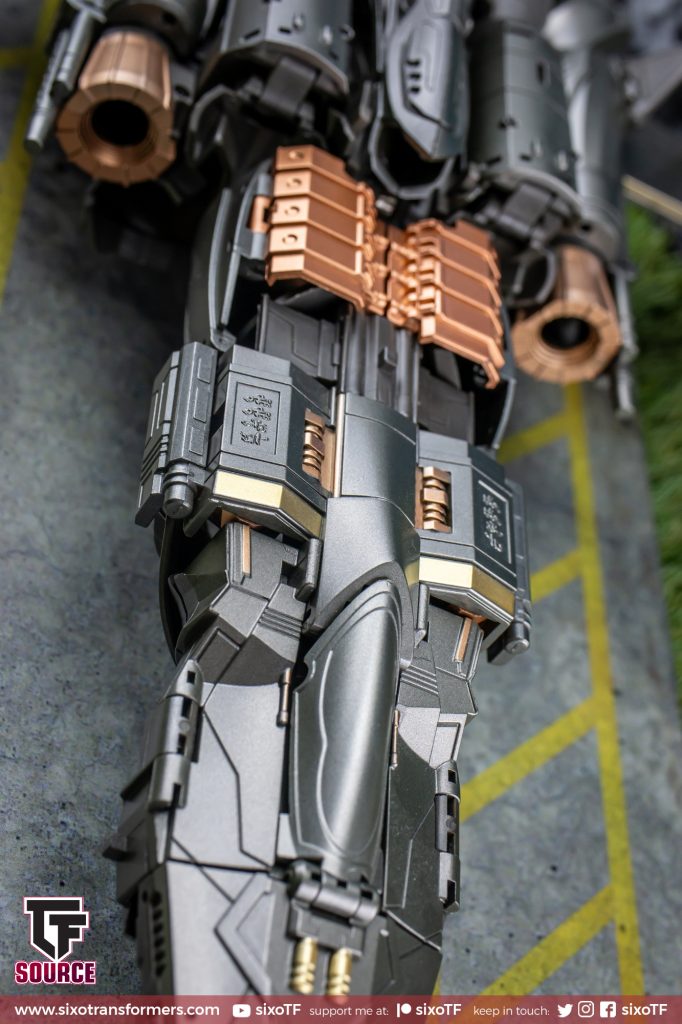 Moving further up the main body only reveals more of the handsome moulded detail and decent finish on offer. The grey plastic in use has an almost sparkly quality to it, meaning that it looks quite premium in hand. My wife even commented that she was surprised how light this toy is when you pick it up, as looks-wise it comes across as though it would be more metallic and weighty somehow. 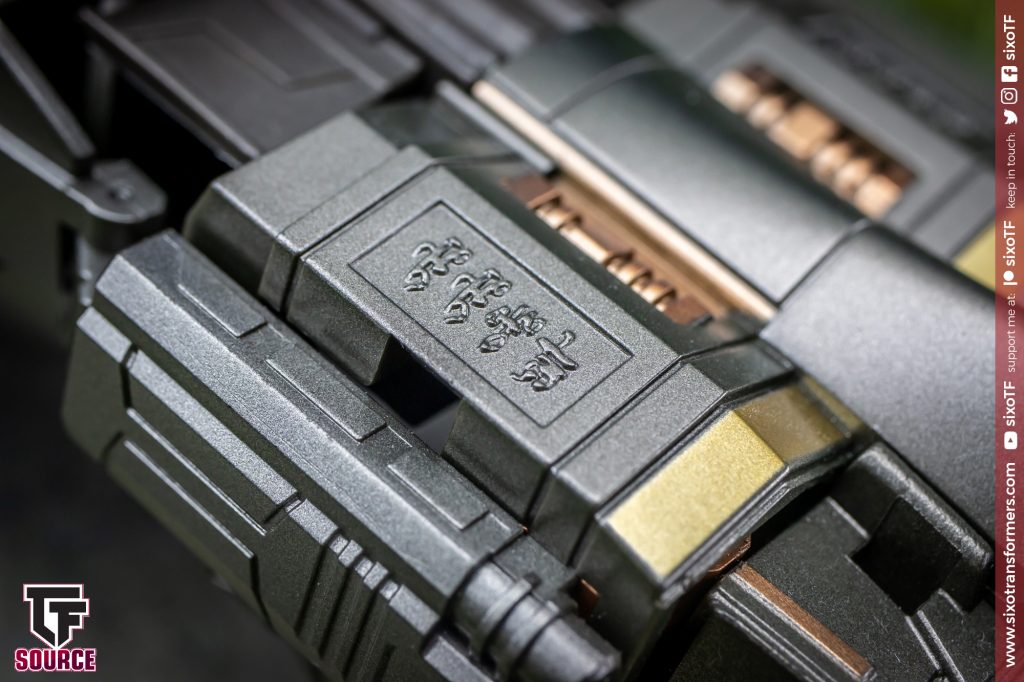 There’s some intricate Cybertronian writing carved into either side of the body which looks superb. 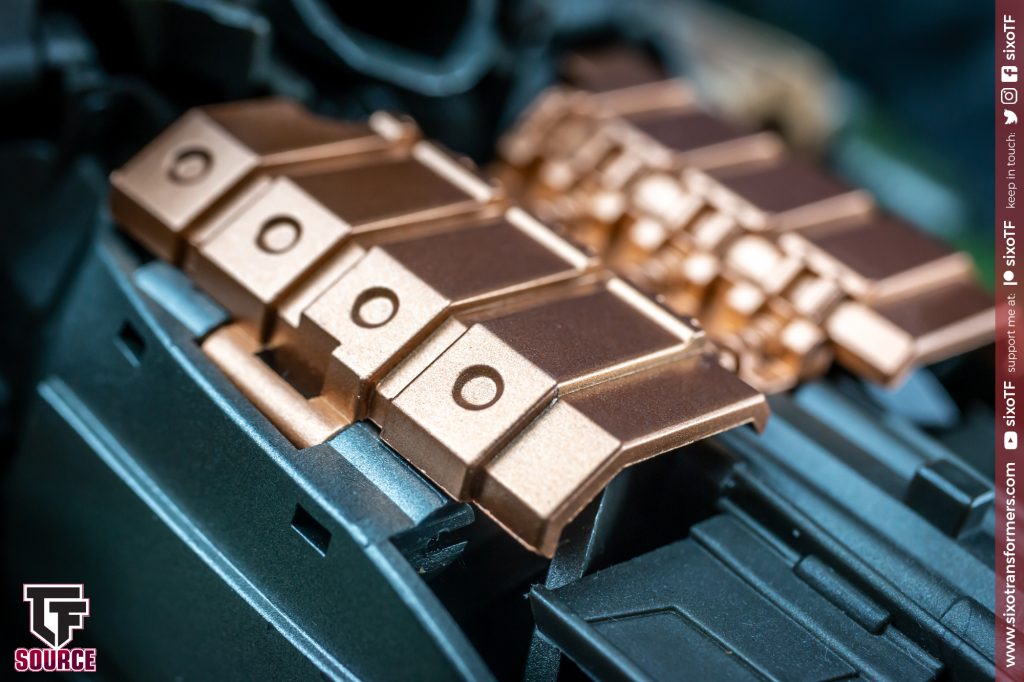 The gold plates really sparkle and add a welcome break in the otherwise quite flat colour scheme. I really like how this midsection of the jet comes across almost like a ribcage-of-sorts. 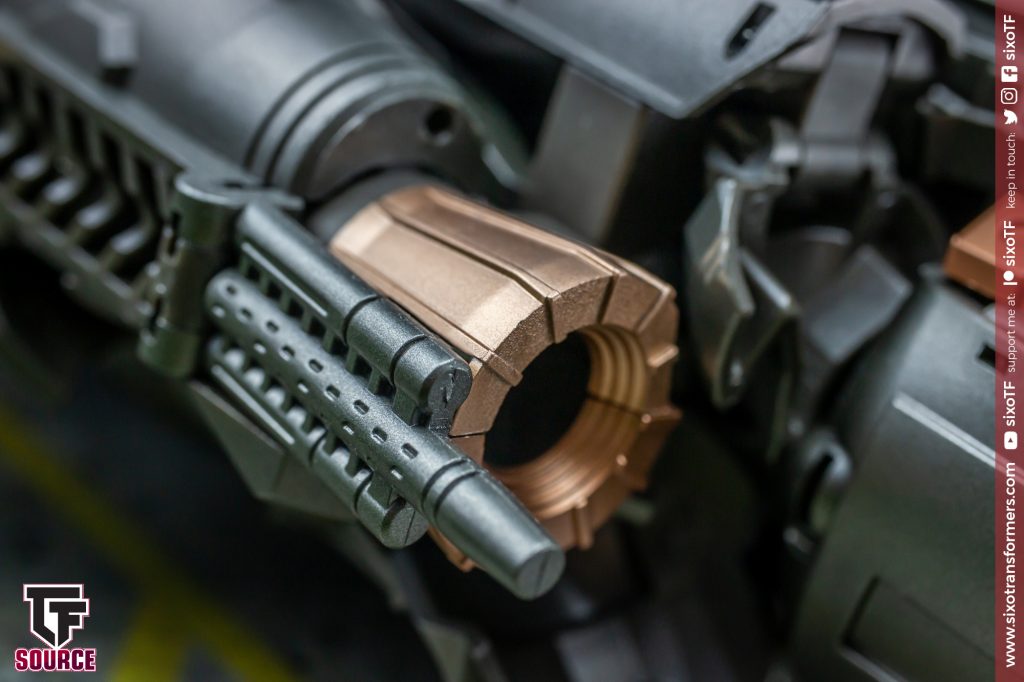 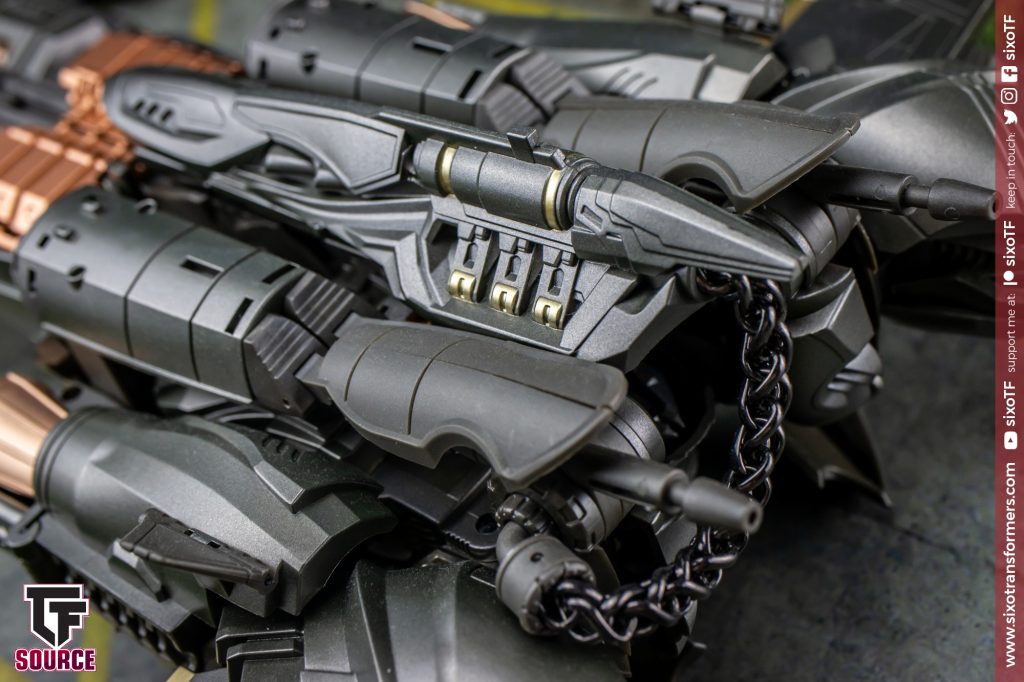 The rear of the jet sees the main cannon accessory mounted in prime position, and is connected to the back via a metal chain running from the rear of the gun itself. Again, it looks really striking, despite blending in well with the rest of the mode. 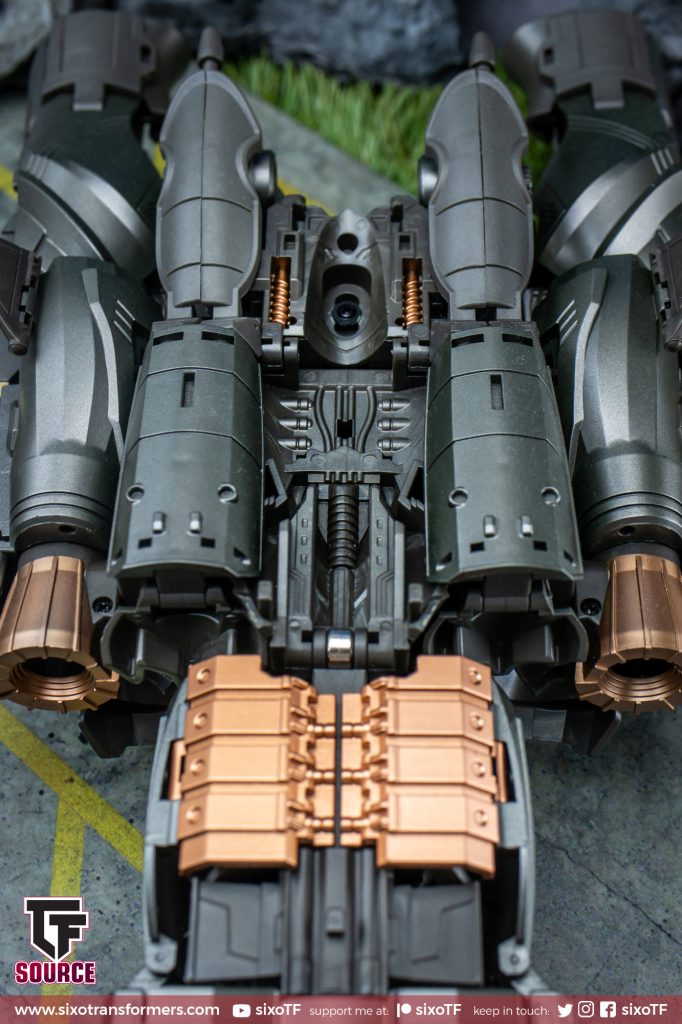 You don’t have to have it in place, mind, and should you prefer you can remove it to reveal further evidence of robotic detailing underneath. The jet looks a little less aerodynamic without it, however! 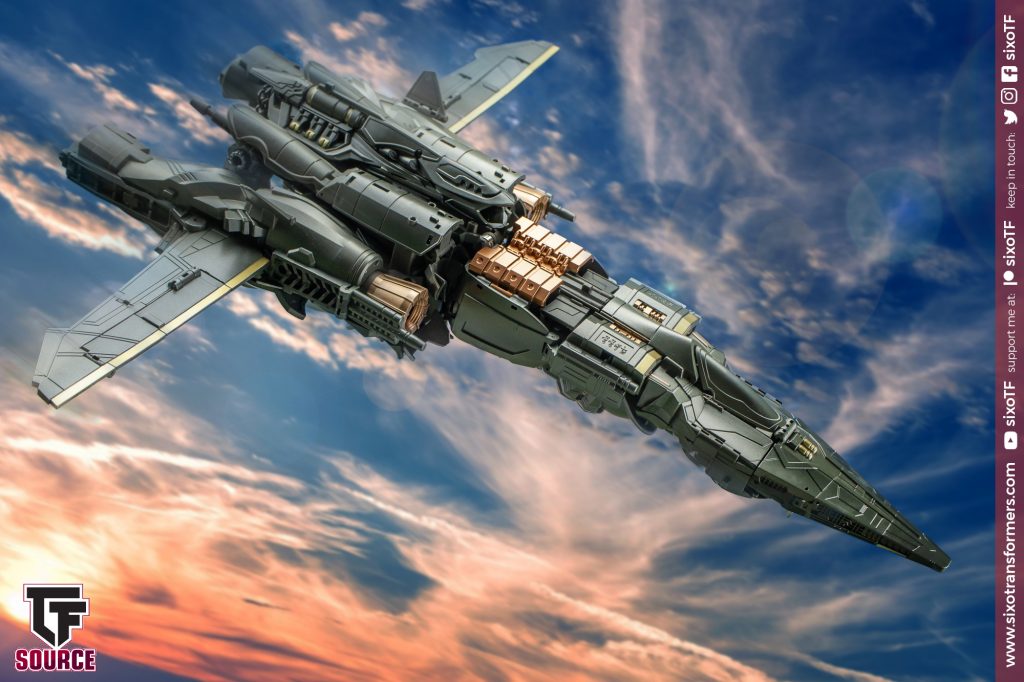 So all in there’s a lot to feast your eyes on here – perhaps more than you might think after just a cursory glance at some stock photos. Yet the overall look is not overdone or overwhelming at all, and comes together so beautifully that you can’t help but stand back and think, “F—, yeah!” 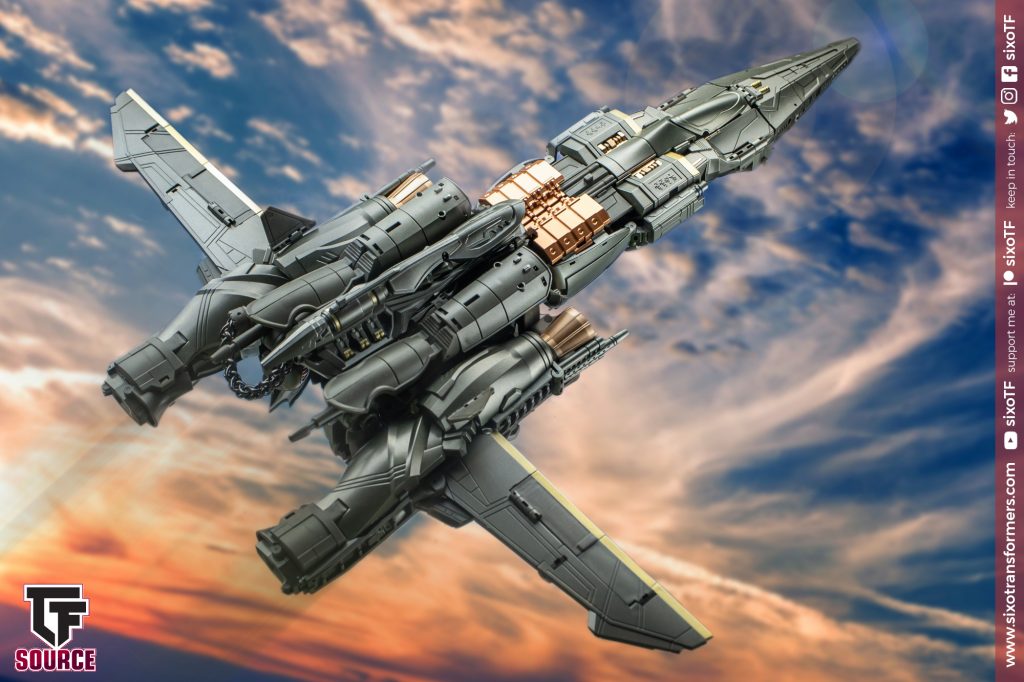 It feels solid, robust and well-built, too – arguably more than any other Unique Toys product I’ve personally owned so far. Whilst I enjoyed Challenger overall, he wasn’t without his, erm, challenges in terms of getting him nicely aligned in vehicle mode. Dragoon just clips together wonderfully well by comparison, and feels instantly more impressive as a result. 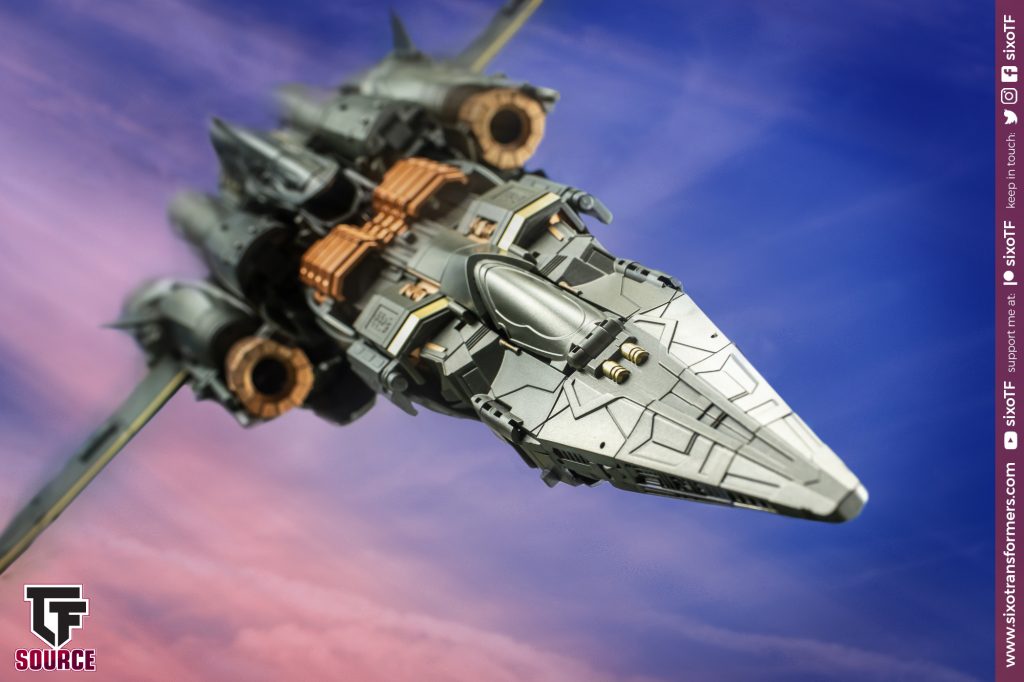 Seriously, get this thing in your hands and I don’t care who you are – you’ll be swooshing it round the living room in no time, guaranteed! 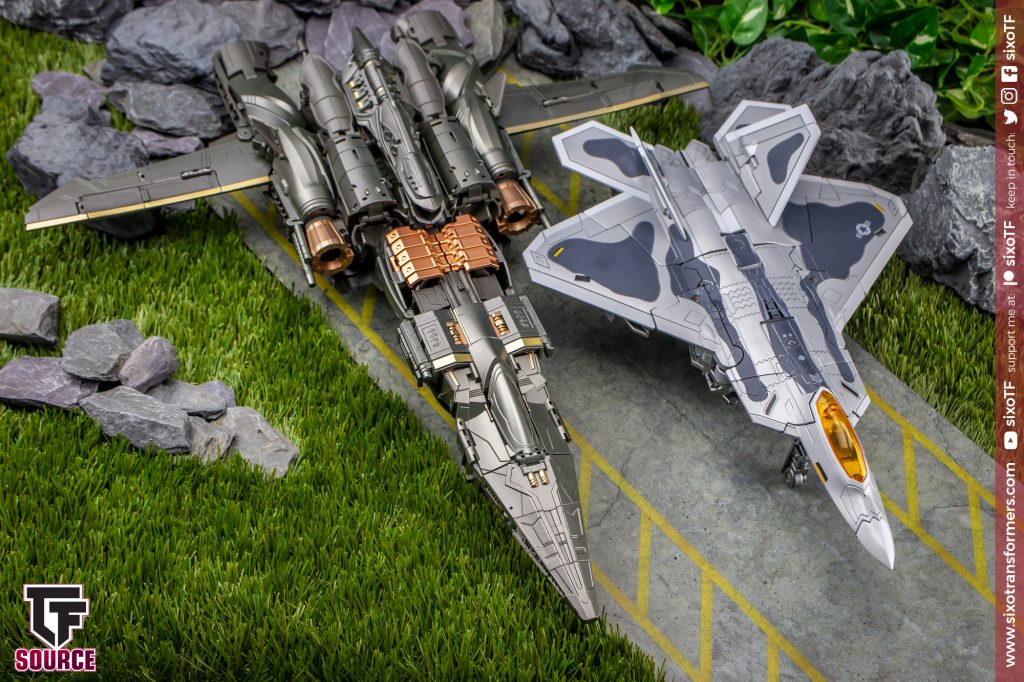 I mentioned before that Dragoon is rather mahoosive, and perhaps that’s best evidenced by a few comparisons. Here he is next to Black Mamba Star Adjutant, who is roughly as big as a Masterpiece Seeker and I would imagine may be about the same size (perhaps a little smaller) as the upcoming Masterpiece MPM Starscream. Dragoon dwarfs him. 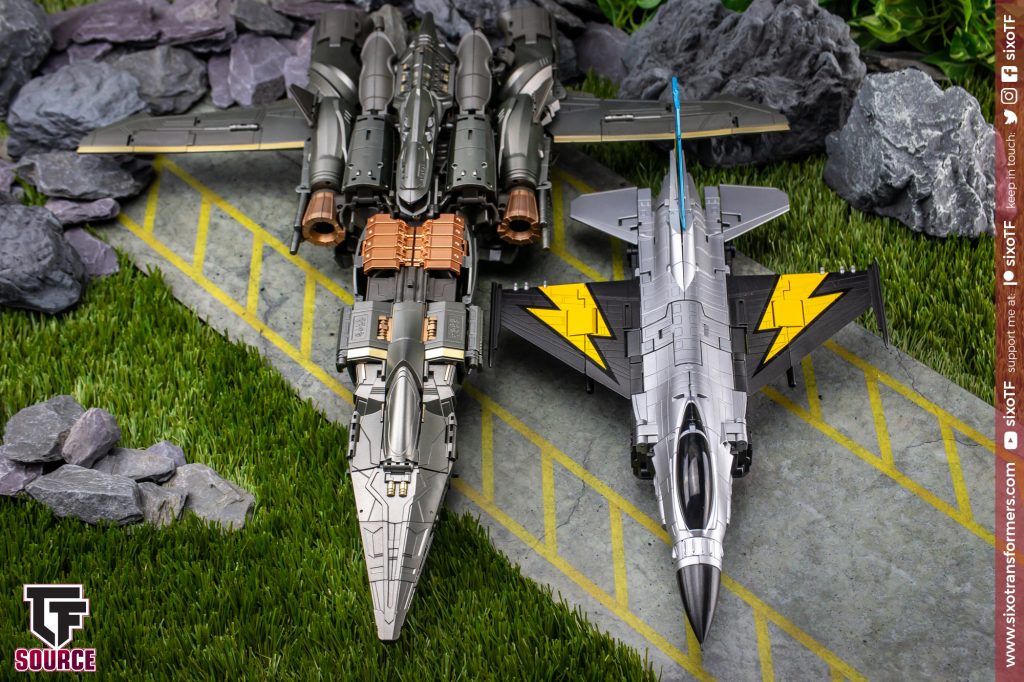 Here’s FansToys Goose who again, is roughly MP Seeker-sized. I remember thinking when I first got Goose that he was a sizeable thing, but as before he’s nothing next to the Drag-man. 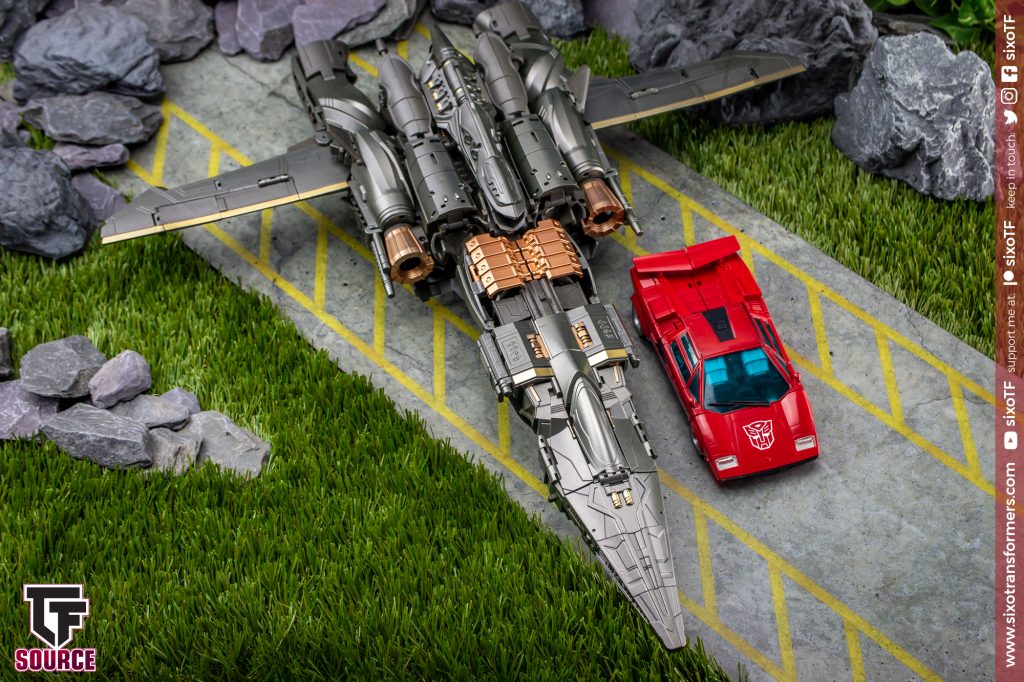 Oh, and how’s this? A Masterpiece Carbot liked Sideswipe looks positively puny next to him! Seriously, too many more chaps like this one and I’m not sure where I’m going to put them all! 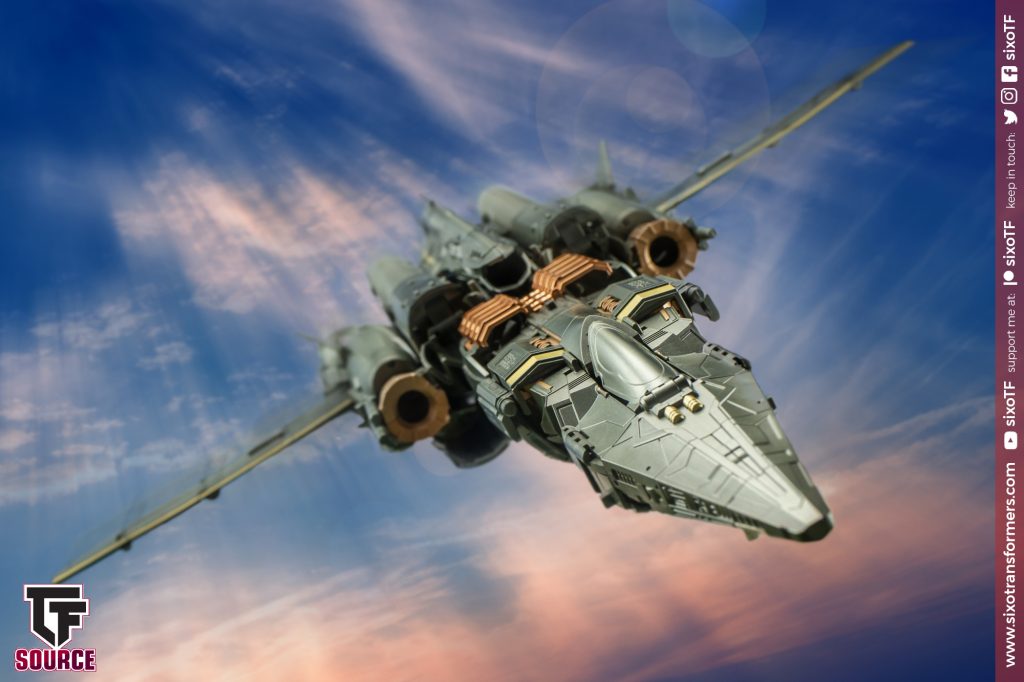 Still, it’s a very nice problem to have and I’m certainly not complaining at all. If anything I just wish that all of my collection was as impressive as Dragoon in his vehicle form! I don’t say this lightly but the fit and finish is certainly enough to put a lot of the official MPM line to shame. 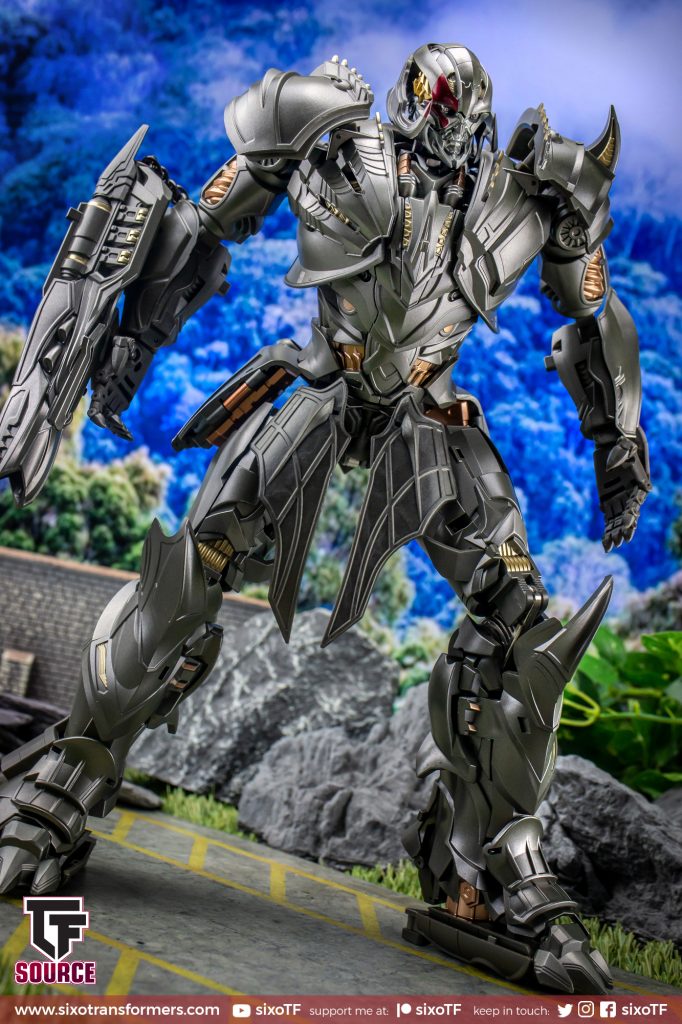 Oh, and in case you’re wondering, he’s no slouch in robot mode either – but that’s a story for part two.