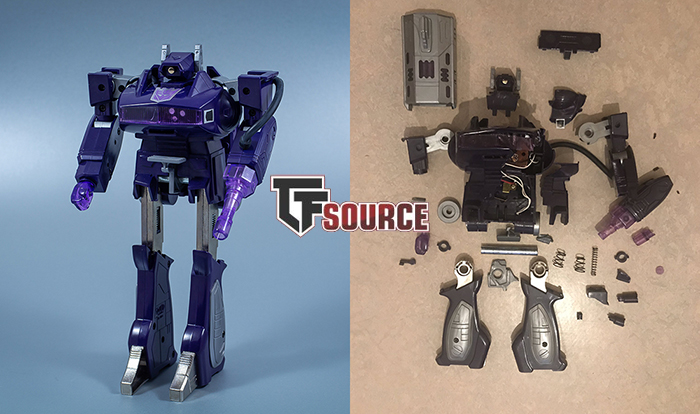 The more Transformers you buy online, especially second-hand or vintage, the more you increase the likelihood of receiving items that are not quite as described or up to your expectations. The truth is that on average, for every five good transactions I have, one goes wrong for whatever reason. Sometimes the seller is neither a toy collector nor a toy dealer, and is unfamiliar with what a collector might expect. In other cases, someone treats the contents of the package carelessly and toys arrive damaged. Of course, with the current situation globally and the backlog of packages building up at various ports, straight up package loss is a risk, too. This article will cover of a few of my more memorable toy buying fails of late. 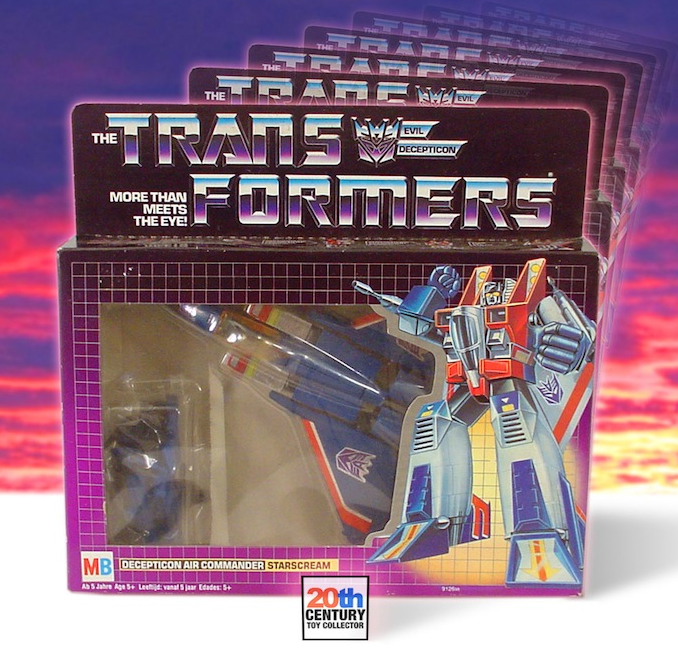 I’m going to start with the most recent heartbreak, but first a little backstory. In the early 2000s, I saw an auction on eBay for a Milton Bradley-badged boxed G1 Starscream, but the toy was clearly a Thundercracker wearing Starscream’s stickers. At the time, many of those weird and wonderful non-Hasbro packaging variants were coming to light thanks to the efforts of many collectors, so it was not dismissed as an error, but rather investigated as a variant. 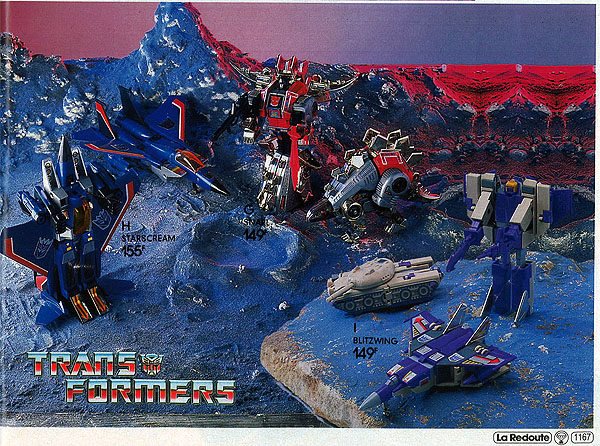 Milton Bradley had the licence to release Takara’s moulds as Transformers in many mainland European countries in 1985, but some of those moulds were still licensed to Ceji Joustra who were releasing them under the “Diaclone” banner at the same time in the same territories. Later in 1985, Milton Bradley and Hasbro acquired the rights from Ceji Joustra to those remaining Takara moulds, and toys like “Starscream” and “Tracks” were then released in Milton Bradley (MB) boxes, many of them just being Diaclone toys repackaged, styro and all! Bizarrely, Ceji Joustra had released a grey F15 in a box with Thundercracker art on it, but Milton Bradley did the opposite and released Thundercrackers in Starscream boxes. This is proven by the magazine advert you see a little further up showing Thundercrackers in Starscream clothing. The toy also has some distinct features, like pre-rub style canopy and copyright etc. 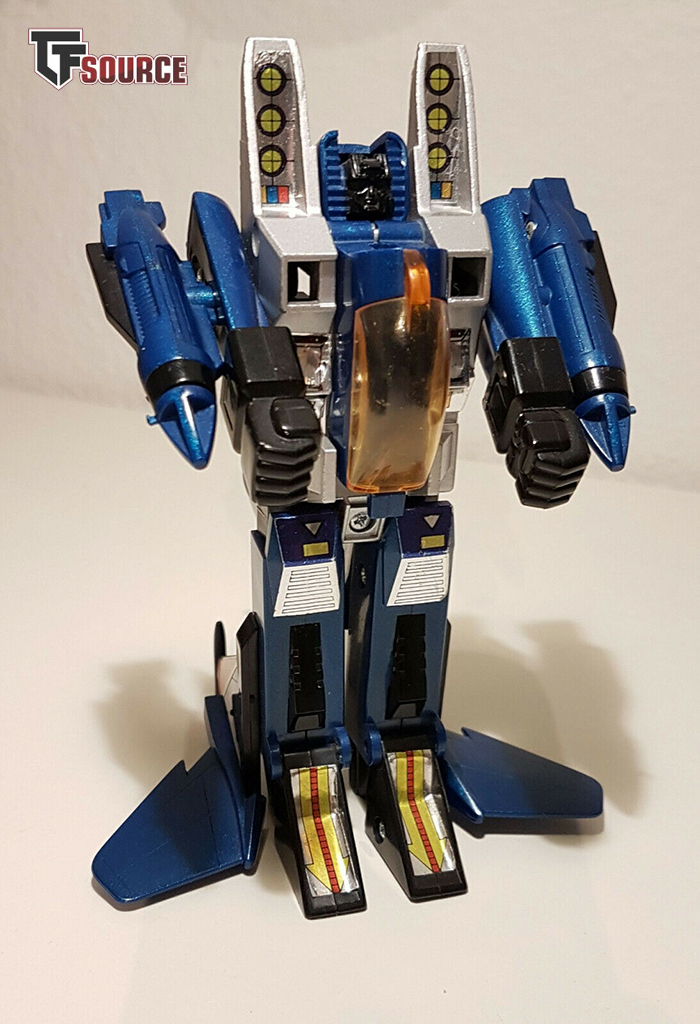 This lovely variant also came with a very odd insert bubble whose shape and orientation were more in line with conehead releases than series 1 jets. Anyway, suffice to say, there’s enough for an experienced collector to spot and identify one of these “Thunderscreams” from auction pictures. In the near-20 years since I spotted that auction, I know of a handful of these toys that were found and bought by hardcore MB collectors. Finally, a couple of weeks ago, I spotted one myself on a European eBay page with Starscream stickers and absolutely all of the correct moulding details. I didn’t care that it was loose, because its history and my own part in bringing it to light made this an extraordinarily special item. Thanks to Twitter user Scrounge who lives in the same country as the seller, I was able to buy the item (no international shipping), but as is common in mainland European eBay purchases, payment was to be by bank transfer only. 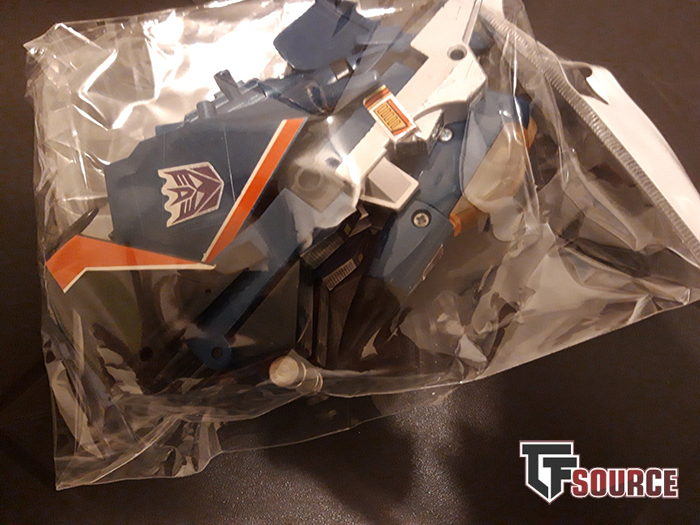 Well, the item arrived in what can only be described as a body bag. Sure, it was inside a flat box, too, but absolutely zero padding, bubble wrap or protection means that it was rattling around and vulnerable to impact. A very important thing to remember when buying from a non-collector and a non-dealer, tell them exactly how you want your toy packaged. I do this all the time for valuable and rare toy purchases, but on this occasion I failed to pass that onto my friend who was purchasing it for me. That’s on me, it’s become part of my routine for exactly this reason, and I forgot. The result is extremely sad: 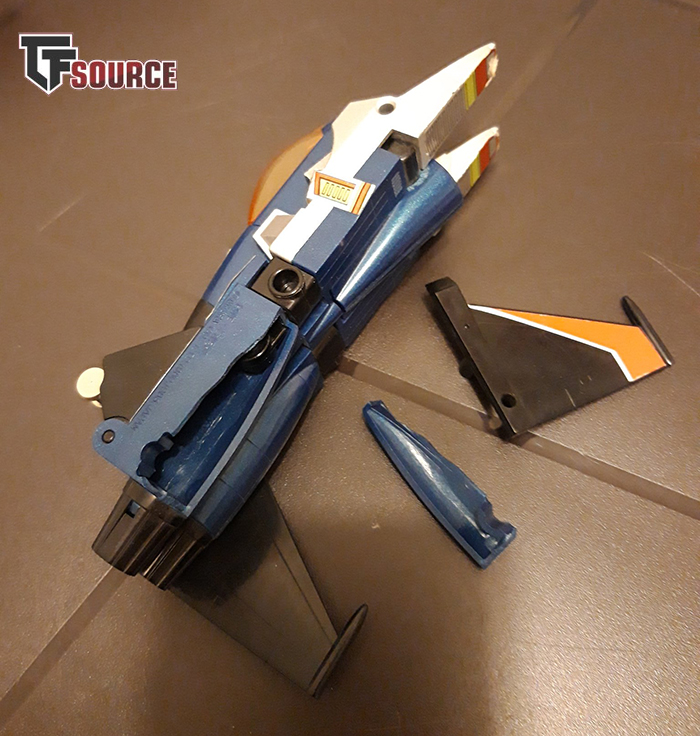 It’s a crying shame to see such a rare variant end up this way, there simply cannot be that many of them left, and now there’s one less. Of course, it is worth using some glue and repairing, but I’m not sure how well it would stand up to the vertical fin being inserted. I’m not even sure I have ever seen a G1 Decepticon jet damaged in this way! I think what bothers me most about the damage is just how unnecessary it was, and how easily it could have been avoided. This wasn’t a toy that had broken as a result of being well-loved and played with to the point of obliteration by a child, it was simply damaged due to neglect in shipping. It really is astonishing what people believe a simple toy can survive during the brutal shipping and handling process, especially at a time like this. 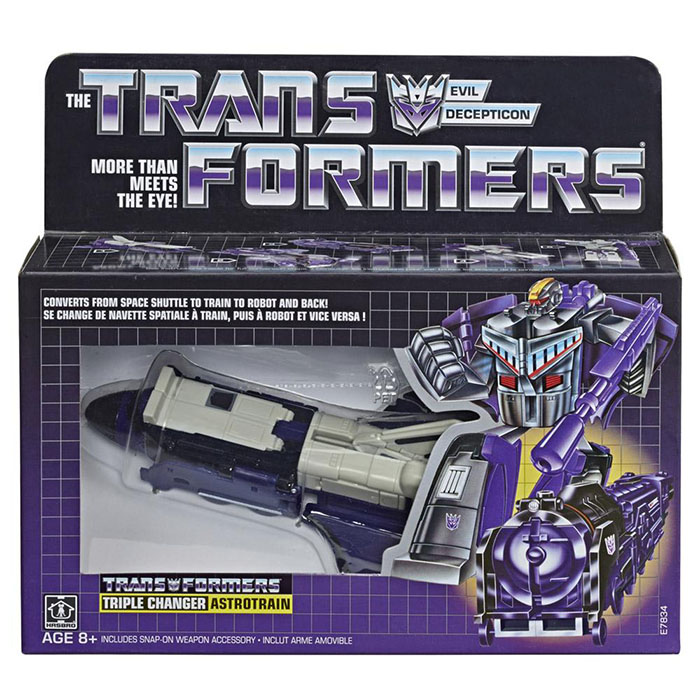 Next up, nobody’s fault, really. I asked a friend of mine to frequent Walmarts in the US on his travels between January and March of this year in order to grab me one of those spiffing new Walmart exclusive G1 Astrotrain reissues! He kindly went way out of his way to check every Walmart he came across, even ensuring that I got one in the finest condition. He found one for me in early March and sent it to Iceland, along with an unused G1 Doublecross stickersheet he’d snagged off eBay US for me. Friends like this are not to be underappreciated, I still cannot quite believe how much effort people I have never met in person are willing to expend in order to help me score something for my collection, something I hope they realise I am always happy to do for them in return. 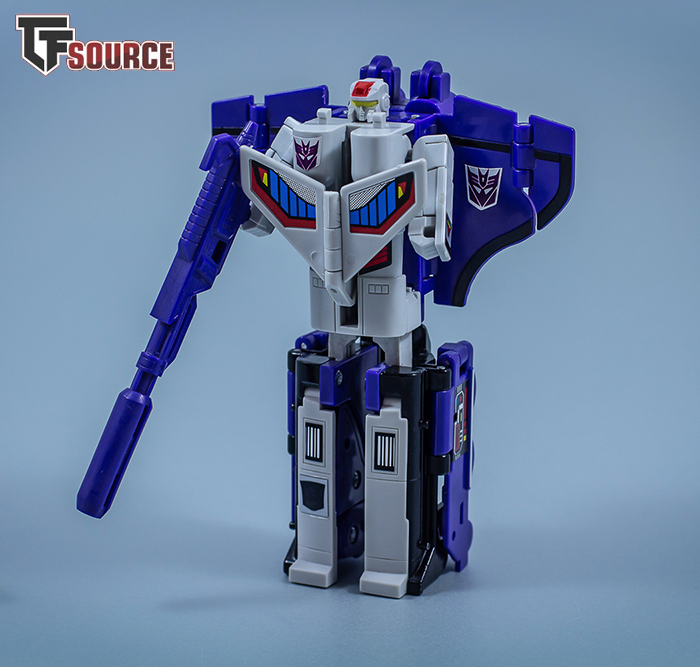 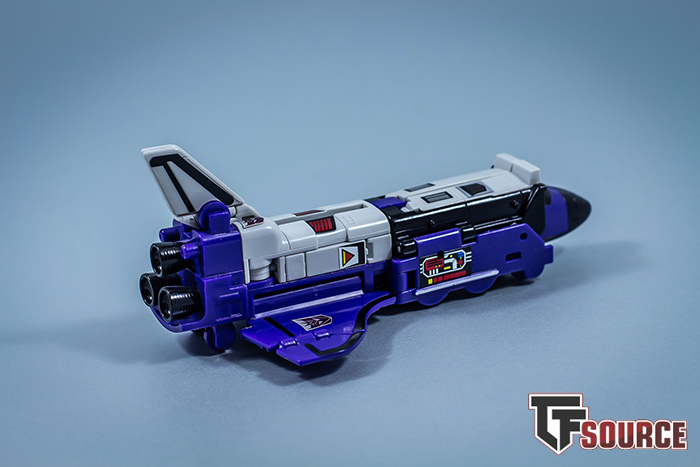 After being tracked through USPS’ system for a mere 4 days, the tracking never did update again. So, over two months after it was sent, USPS informed my friend that it made it to customs (they didn’t specify in which country, although I assume US customs) but considering the amount of time it has sat there, should be considered lost. This, of course, is not a rare variant nor is it a significant relic of Transformers history…but I would say that if you can find an unused Doublecross stickersheet at the drop of a hat, you’re doing a damn sight better than I am! With global post the way it is right now and the sheer backlog of parcels that remain stationary at their respective ports for long periods, this was bound to happen to one of my packages. A shame, but something to be aware of – even with tracking – that can occur under the current circumstances. 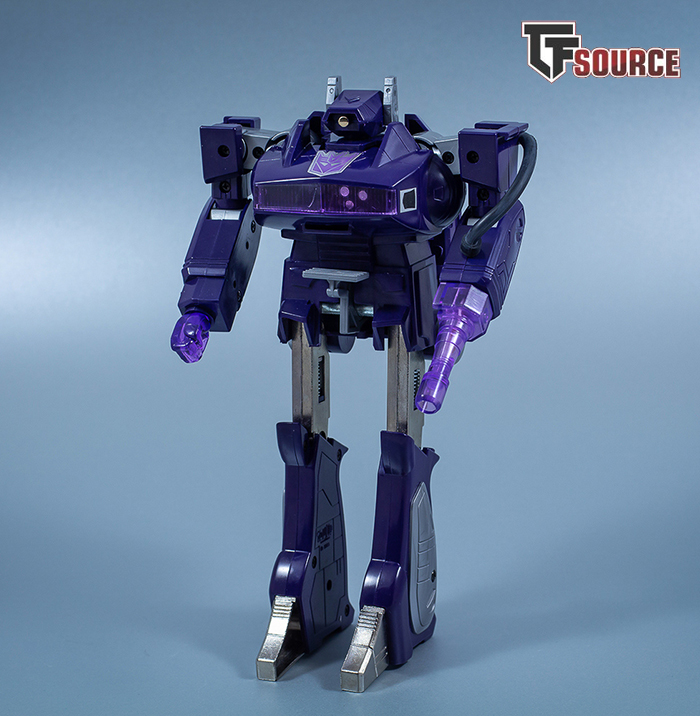 The next and final entry on this list of lost treasures is probably the most tragic. G1 Shockwave is a delicate toy at the best of times, with electronics that can fail, translucent parts that can shatter, barrel and battery covers that can be lost to time, a rubber hose that dries and cracks easily, plus long legs that collapse under the weight of the toy with age. Finding a mint Shockwave is, to put it bluntly, an absolute bastard. Add to that the rarity of the mainland European G1 Shockwave, again from Milton Bradley, and you’ve got yourself a mission.

As it happens, I found a Milton Bradley Shockwave in Europe, France to be precise. Not only would the seller not ship internationally, but he wasn’t even willing to post it within France. This was months before the pandemic, too, I might add. Through a friend who collects in France, we contacted a buddy of his who lived in the same city as the seller. Amazingly, this complete stranger was kind enough and willing to pop to this seller’s house, exchange cash for Shockwave and then ship it to me. So that’s exactly what he did! I must tell you, this Shockwave was utterly beautiful; perfect sticker and hose, working electronics and the multilingual instruction manual that proved it was the Milton Bradley release. 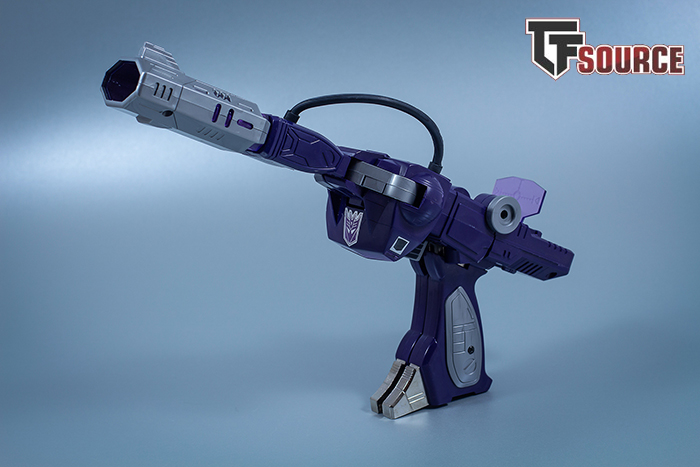 It was all going so well, a tremendous but complex plan perfectly executed. The fellow in France shipped Shockwave internationally to me after receiving payment, and all I had to do was wait. I had owned a Milton Bradley Shockwave years before and I STILL get people asking me to sell it to them when they see the photos, even though it’s long gone.

Unfortunately, that’s where the fortune expired. The gentleman who had procured this MB Shockwave for me was informed that his package had been returned to the post office and that he should go pick it up. Something had happened. When he brought it back home, he didn’t even need to open it to know what had transpired. The shipping box was grossly disfigured with tyre tracks running across it. When he shook the box gently, it sounded like a box of Lego, such was the damage inside. It appeared as though the box had fallen off the back of whatever it was travelling on, and been driven over by the following vehicle. Resigned to its demise, I asked that he ship it to me anyway to see what I could salvage.

Here’s what I got: 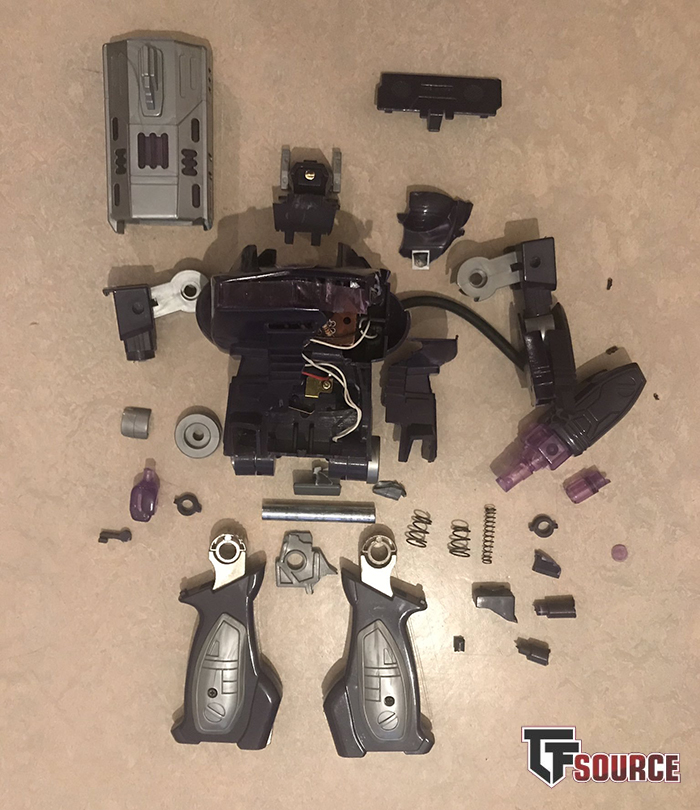 So. Many. Pieces. It was as if a G1 Shockwave had been put on exploded display at a museum. Even the robust die-cast leg sections were bent! You know what’s tragic? The legs still extended and locked in place as well as any Shockwave I have ever handled. It really was an utterly pristine specimen, preserved for decades in the owner’s garage. Had I not awoken it from its slumber and dragged it into the 21st century, requested that it be shipped across the world and into my collection where it would have been treasured, this would never have happened. I was – much like Shockwave here – absolutely crushed. 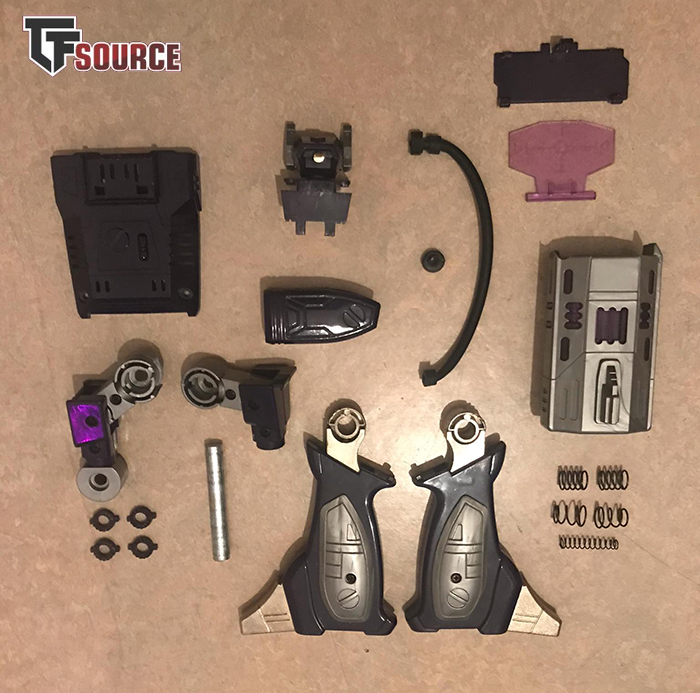 The above was all that I felt was worthy of salvaging, and I did indeed sell off these remains to collectors who could make use of them to repair their own broken or run-down Shockwaves. A perfect hose, a perfect battery cover, and a perfect robot head, too. I kept the chest with the sticker as a souvenir. I think it’s clear that I should stop trying to find and buy rare Milton Bradley-badged European Transformers, because they simply will not survive the journey to me here in Iceland! Also, I just feel bad for the people who volunteered their help as middlemen, as the whole thing leaves a sour taste in their mouths too and they are forced to carry out extra steps (like chasing refunds, dealing with the post office etc) that they simply didn’t sign up for.

Another rare and historic Transformers relic needlessly lost, and I certainly do not diminish my own responsibility and hand in allowing these things to come to pass. 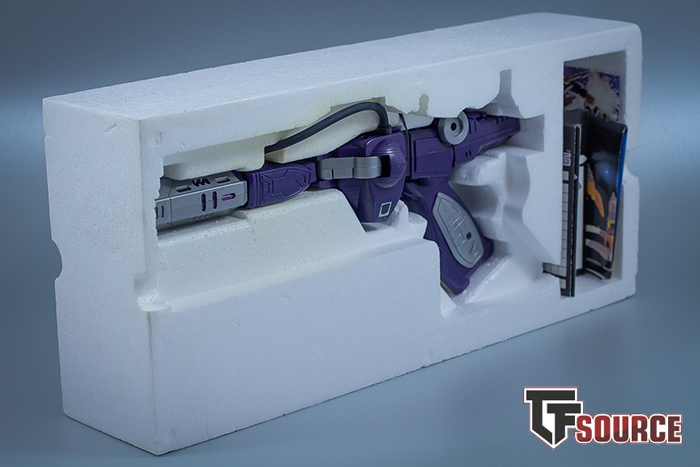 Ironically, I did subsequently get my hands on an absolutely magnificent, untouched G1 Shockwave that had never been removed from the styro (no outer box present, though). It still even had the twisty-tie that held it in place within the insert! It cost me a great deal, but I wanted something special to fill the Shockwave-shaped gap in my collection. And you know what? Straight out of the styro, it had the collapsing leg syndrome!

Some things just aren’t meant to be. 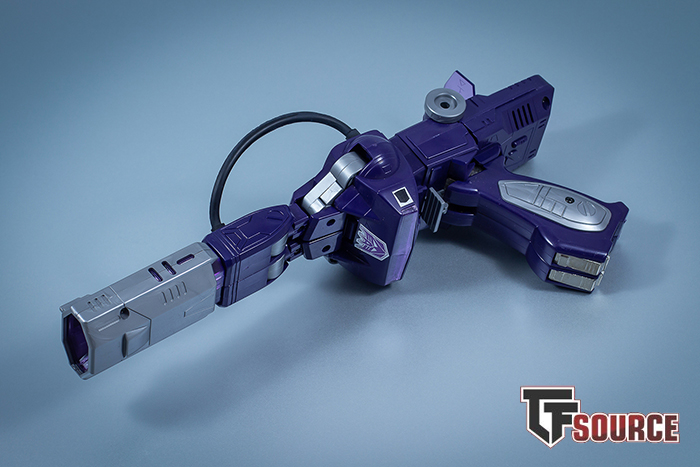 Huge thanks to Scrounge, Puma the Hunter, Laurent Libessart and Etienne for being wonderful members of the community, and to Scrounge and Mijo for the use of their images.