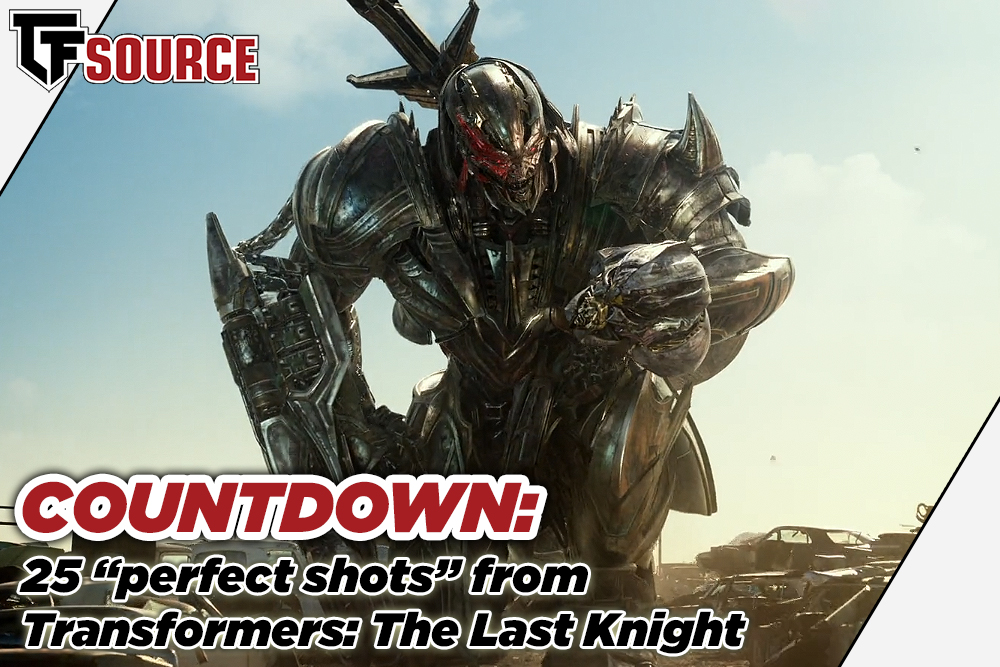 If you like films with strong visuals then you might be aware of One Perfect Shot, which is all about showcasing amazing frames from some fantastic movies. Well, I may not know many people who would describe Transformers: The Last Knight as a “fantastic movie” but there’s little doubt that it is at times a nice feast for the eyes as well as being utterly, utterly bonkers.

YES, Transformers: The Last Knight is a load of old bollocks in many respects, but it is still the only film I can think of where a robot physically assaults a giant fish. So there's that. pic.twitter.com/dl7mf14Kqu

So with that in mind we’ve combed through the two-and-a-half hour adventure and selected 25 of the most “perfect shots” for your viewing pleasure!

MASSIVE SPOILERS ahead for TLK in case you haven’t seen it!

The “Nemesis Prime” storyline may have come from nowhere and circled around to end in essentially the same place, but there’s little doubt that the imagery and camera work showcasing Optimus’ descent into evil was on fine form. The close-up of his robotic features shows off all that wonderful detailing, and that red stripe does look kinda cool too, even if it’s entirely redundant.

Cogman may rank up there with some of the silliest creations to ever grace the big screen but he certainly has his fans. Perhaps that’s no surprise, as putting his fish-punching antics to one side he does have a few notable moments to shine, including this comparatively sombre moment where he mourns for his master, Sir Edward Burton.

Nitro Zeus wasn’t in the film a lot, but the loud, abrasive and tough-talking Decepticon still managed to make a huge impact. His transformation sequences are some of the best, and this shot showcases him with flair.

Here’s human “hero of the story”, Cade Yeager, just hanging out with Hound. For all its over-the-top bombastics, the film did have a couple of quieter moments of interaction between humans and robots that some fans had been looking for in the earlier movies.

One of the early money shots of the first trailer, this ruined football stadium was only present during a throwaway scene in the final film but it still looks post-apocolyptically cool.

When Optimus speaks, the Autobots listen. So it is here with Bumblebee & Drift hanging on his every word as chaos rains in the skies above. I may not have much clue what was going on by this point but it looks good!

Cade, Vivian and Cogman go deep-sea exploring and uncover an ancient Cybertronian ship that came here to… look for the Allspark, I guess?

Megatron is back, and a lot of fans would tell you that this is their favourite design of the Decepticon villain. Here he is putting the squeeze on Colonel Lennox.

Stonehenge! Spaceships! Killer planets! Hills! Clouds! Charging Autobots! Yeah, I have no clue what’s happening either but it looks exciting.

Here’s the wily *checks notes* Izabella marching toward a ruthless band of fully-armed Decepticons. As you do.

Picking up directly from the last film (kinda), here we find Optimus shut down, frozen and adrift in space. I’ve little doubt this was thrown in there “to look awesome” but it works, dang it.

These films have consistently pushed Bumblebee to the forefront although if anything he slips into the background a bit more in TLK. He still gets his moments though, and looks magnificent with his new hammer.

What is going on here? I’ll see if you can remember, but it could only really happen in a Transformers film.

Most of the key killer action poses are taken by Optimus throughout this film, as clearly evidenced by this astonishing moment. You wouldn’t mess.

Oh, and the next shot might be total trailer bait but it still ranks as one of the more memorable moments from the film itself!

Not much was made of the relationship between Megatron and Starscream throughout the TF films so far, although this almost touching moment was still a great one to witness.

Here’s Cybertron (which is now bad?) colliding with Earth (which is presumably good?) although it’s secretly Unicron (which is… bad?) for… reasons… IDK, but it pretty.

The briefly-used Autobot, Canopy was another interesting idea that ultimately was dispensed with far too quickly, but for the brief moment he’s on screen he provided us with a fairly fresh visual.

Fan-favourite Barricade gets a big makeover in this movie, and certainly lights up the screen during his brief appearance.

There were lots of interesting ideas in this film (too many, actually!) that sadly never really had time to establish themselves as part of the overstuffed whole. This memorable visual of a robotic droid in a destroyed wasteland may not be the most original aspect of the movie, but it still looks cool.

Here’s Nemesis Prime in full murder-mode. The bit when Bumblebee speaks and cures him ranks up there as this movie’s “Martha” moment, but damn if that ‘bot don’t look hawt.

Optimus returns to a ruined Cybertron which, despite not looking a jot like it did in previous films, still makes for some interesting visuals.

Hot Rod proved a divisive take on the character in TLK, but most fans would at least agree that the design is on-point. Here he is doing his thing and looking groovy all the while.

And last but not least we have these two mugs, which, say what you will, both look pretty good for live-action renditions of the classic characters, in my book.

So there you go, that’s our list! Did you enjoy TLK? Did we miss any “perfect shots” from the film? Thanks for reading!

This entry was posted in Source Articles Tagged with Countdown, The Last Knight