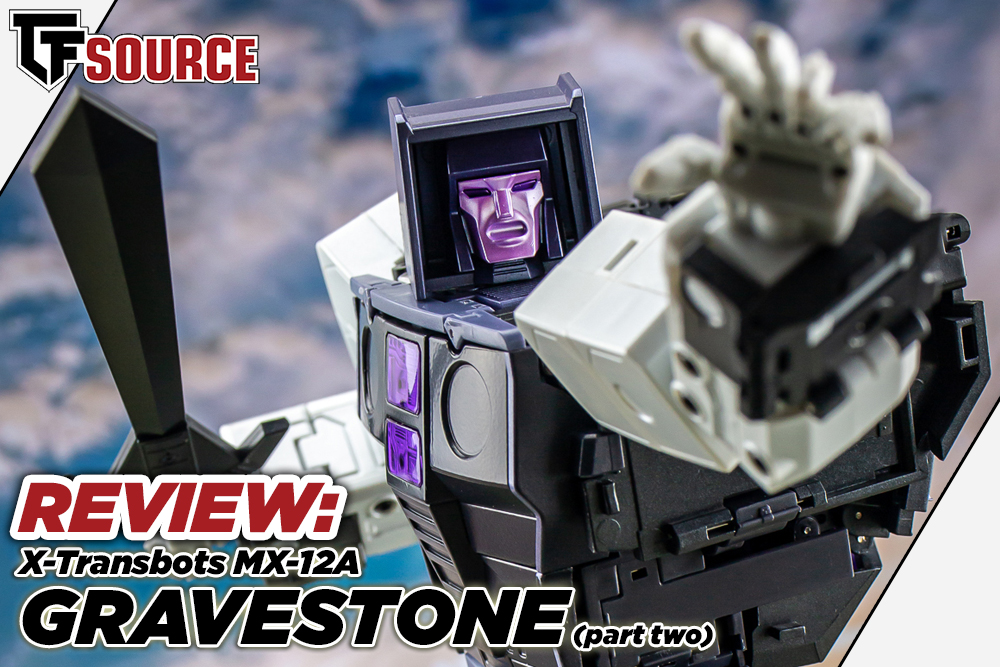 We’re back for part two of our look at X-Transbots Gravestone, their take on a Masterpiece-styled Motormaster. If you missed part one then be sure to check it out before continuing below. Last time we took a look at that sterling vehicle mode, but now it’s time to go through his transformation and beyond! 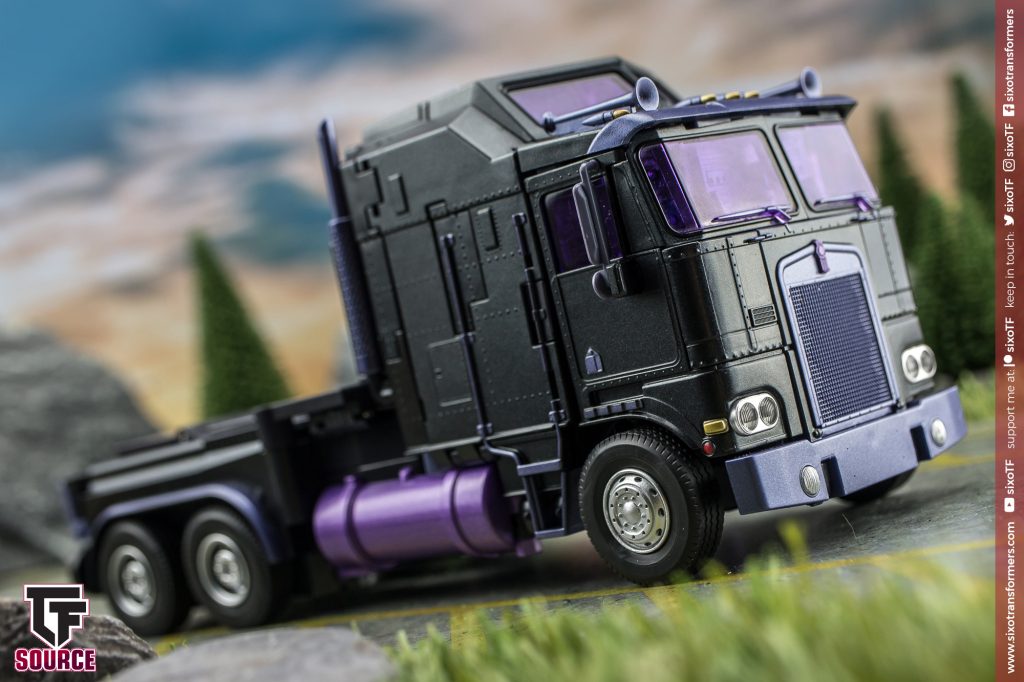 Perhaps the biggest challenge that I found with converting Gravestone to his robot mode first time was successfully unclipping all of the various panels, as he’s one of those toys that’s tabbed together very securely and so leaves you not quite sure how to get cracking! For the most part though, this conversion is a surprisingly simple affair, with nothing outside of the odd bit here and there that should cause you much bother at all. For me, the most hair-raising moment was getting the panels at the back of the truck section untabbed from the top, as there are some quite thin sections that you have to pull on very hard to get them loose. Still, I’ve managed this transformation many times over now and haven’t had any actual problems so far, and just look at the handsome lad you’re left with, eh? 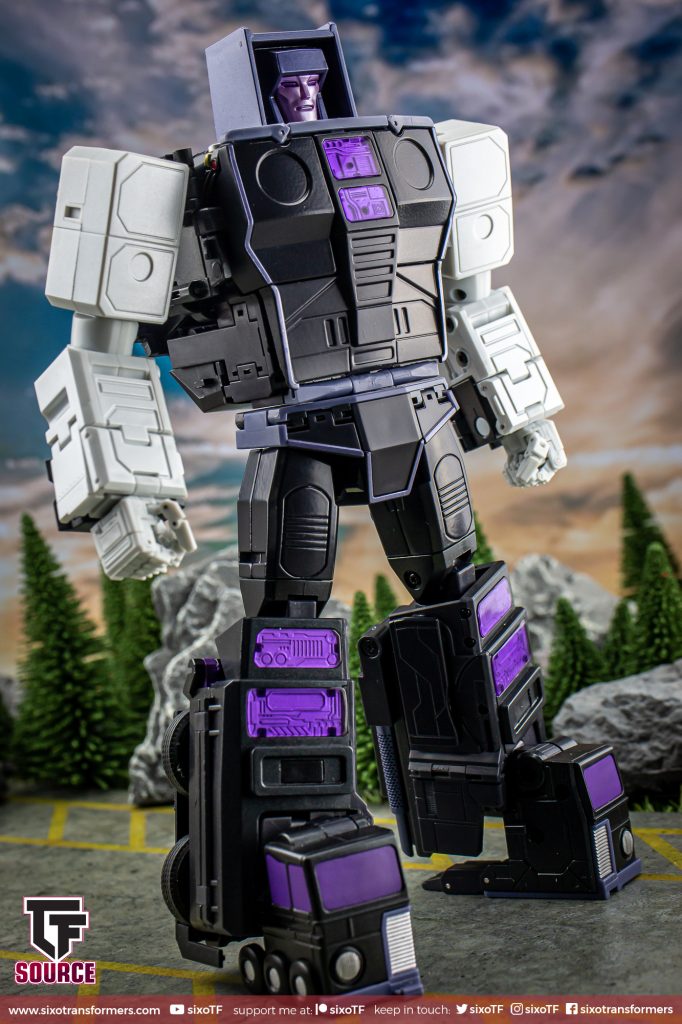 No doubt about it – that’s a striking robot form. It’s really interesting to me just how different each of these 3PMP attempts at Motormaster have been, and with X-Transbots being the only company to adopt the cab exclusively becoming the robot in this way there are some definite advantages to be found here. Firstly, you’ll note how clean the legs are in comparison to some of the other attempts, including FansToys Roadking, who I also recently reviewed. In fact the whole body is pretty well-defined and clean overall. 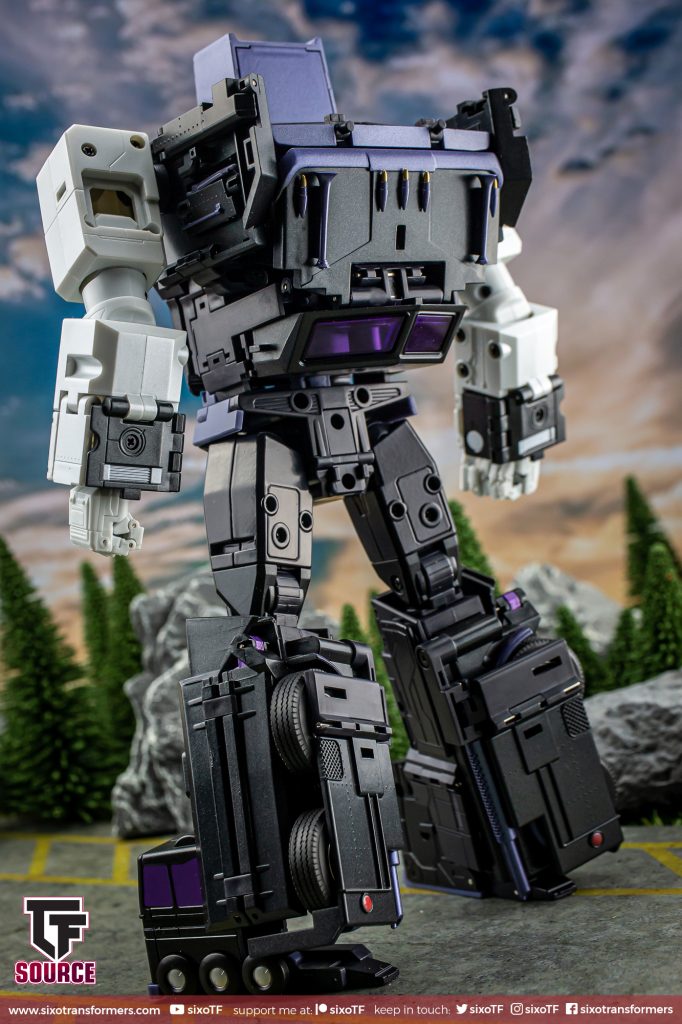 A back view will show you that there is a bit of kibble here and there, though. In fact it’s hardly the prettiest back view I’ve ever seen, with some obvious screw holes and panels aplenty, and there is a noticeable backpack still despite the comparatively simpler transformation to other options for this character. That said, there’s an obvious benefit to this mode in not having to stow away a massive trailer section, and overall I think it does a great job at aping the look and feel of Motormaster’s animation model. 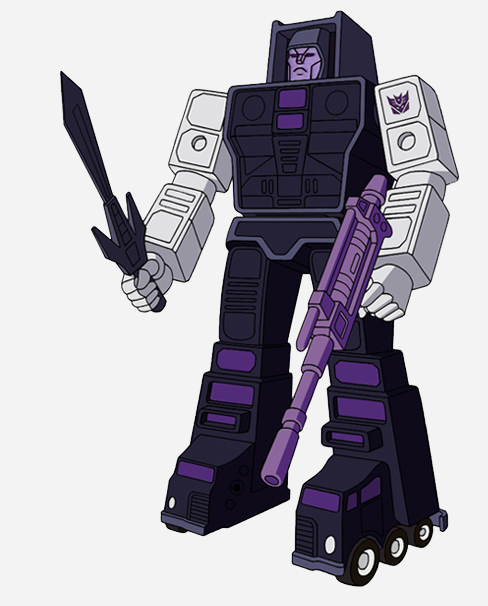 If anything I’d say the thigh section is too clean and tapered, losing a bit of the anime boxiness in the process. You’re in no doubt who it’s meant to be, though. 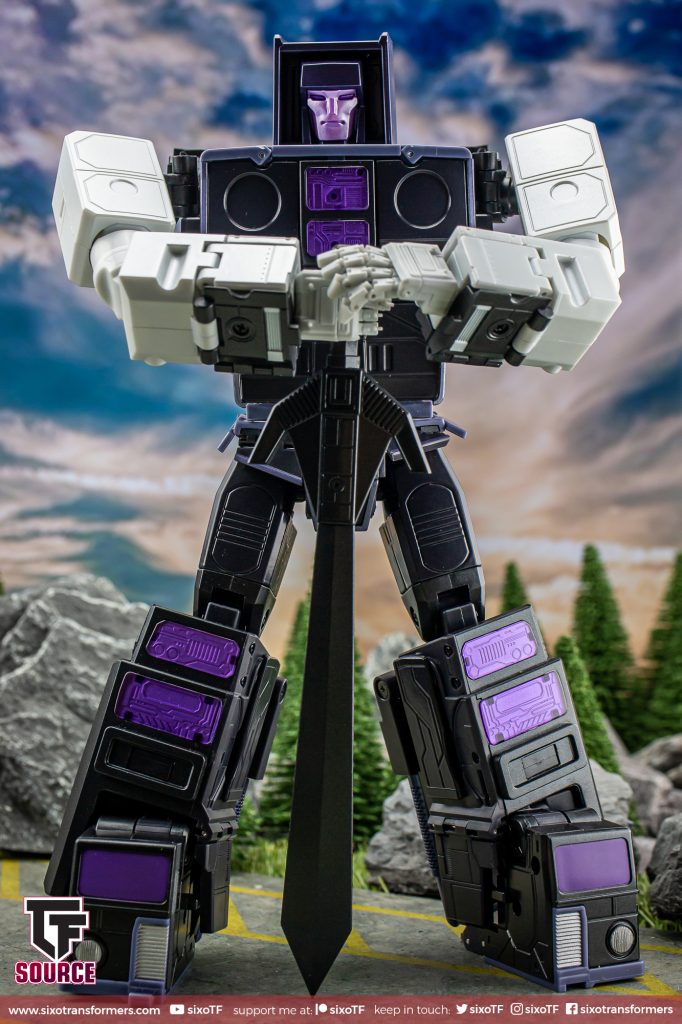 For my money one of the best things this robot mode achieves is the feet. By not relying on having to shrink down the actual cab front to form something resembling a tinier version of itself, XTB have instead allowed the option of faux cab feet which look way better than the alternative to my eye. Additionally, because the design is actually that much simpler, it means that the ankle tilt and range of motion available is much better too! 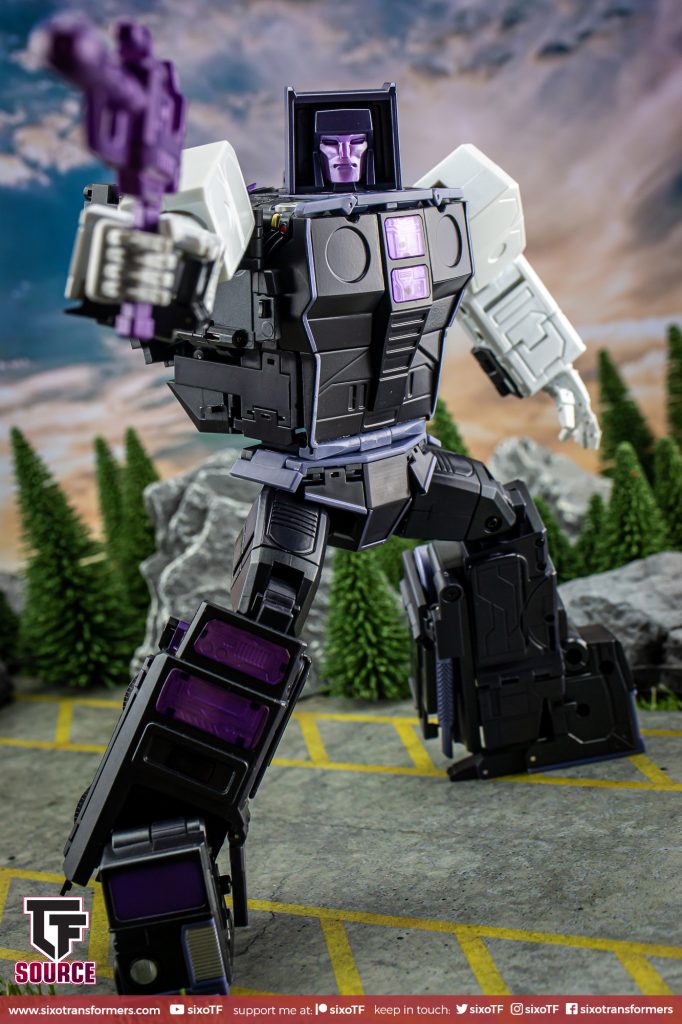 That means that Gravestone is able to pull off wider-legged stances in a way the competition can’t quite muster. It’s a simple thing but it makes a big difference when posing. 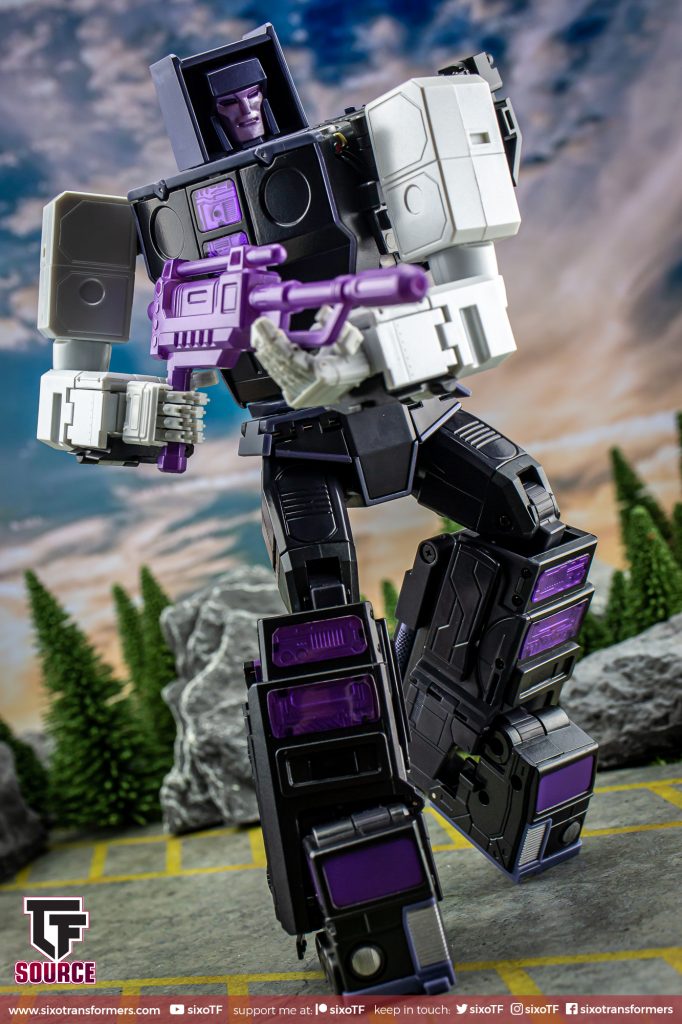 Elsewhere the poseability continues to be on point, with enough points of articulation to pull off some imaginative stances. I like the hinge on the shoulders, allowing for some decent flex forward with the arms, and the rotation point at the knees is useful too. I did find that the head was positioned just a touch far forward to look entirely natural when rotated to the side in some poses though, and boy is that little clip on the front of his right foot annoying in how it impedes a natural walking stance. You can still get him looking pretty mean though! 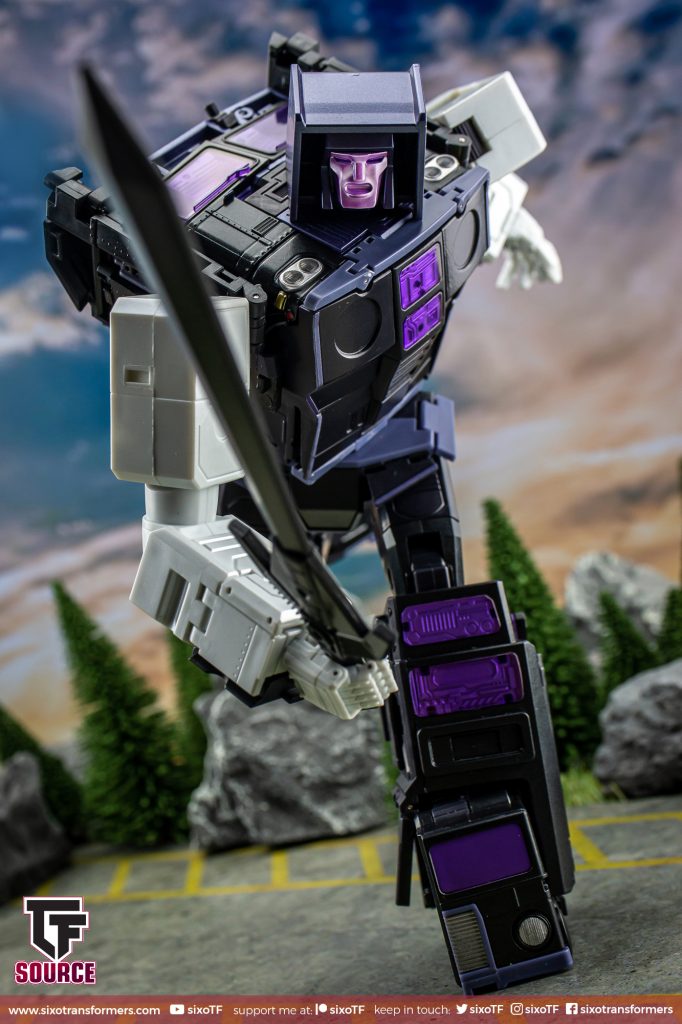 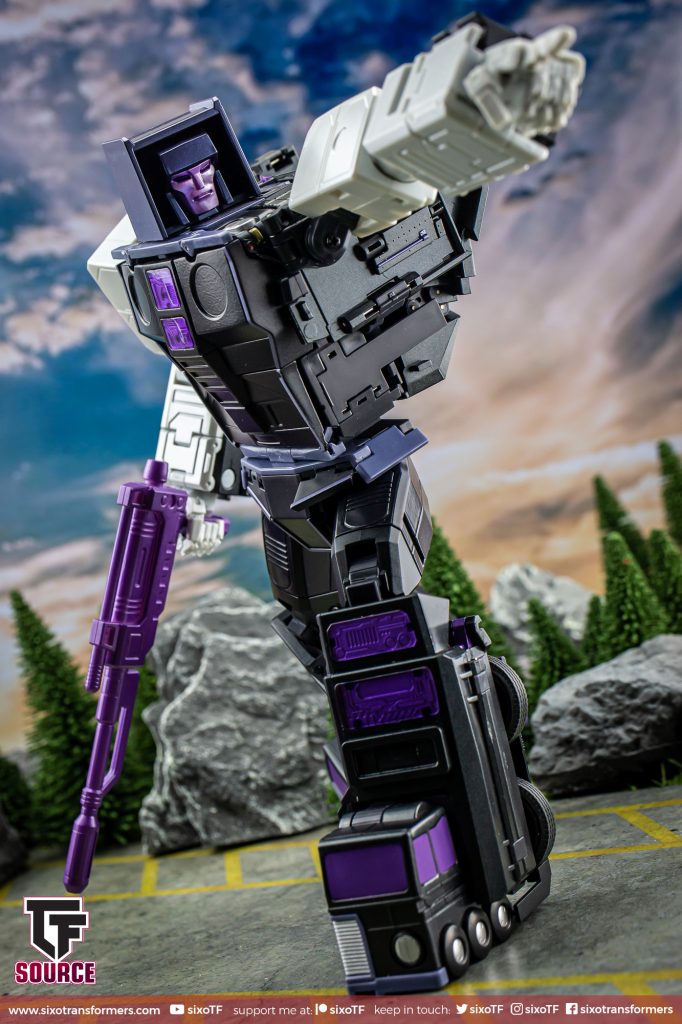 It’s funny because whenever I play with this toy in hand I never find I have the slightest issue with the backpack, but sitting here looking at photos again as I’m doing this write-up I can’t help but feel it appears altogether more noticeable. I think it’s accentuated quite a bit by the tapered waist, giving him a somewhat top heavy look overall. 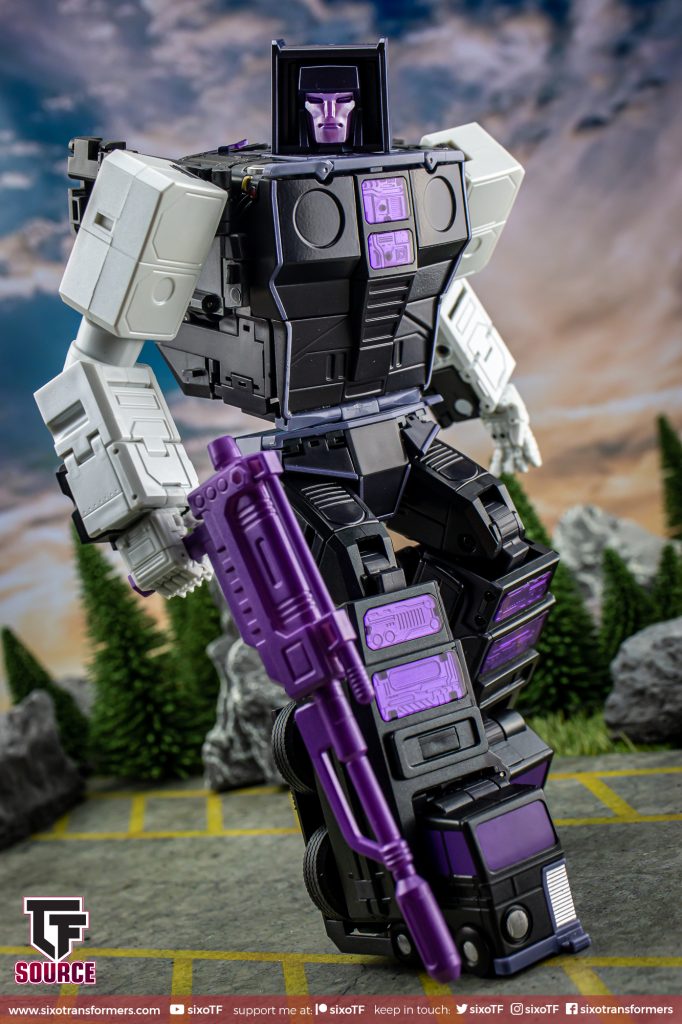 Gravestone does also have a major ab crunch at his disposal, although I have to say it’s a tough one to make work in a pose without it coming off as a little awkward. I did find that my copy doesn’t clip together maybe as strong as I’d like on this joint either, so just occasionally the heavy top half will kinda limp forward a bit! 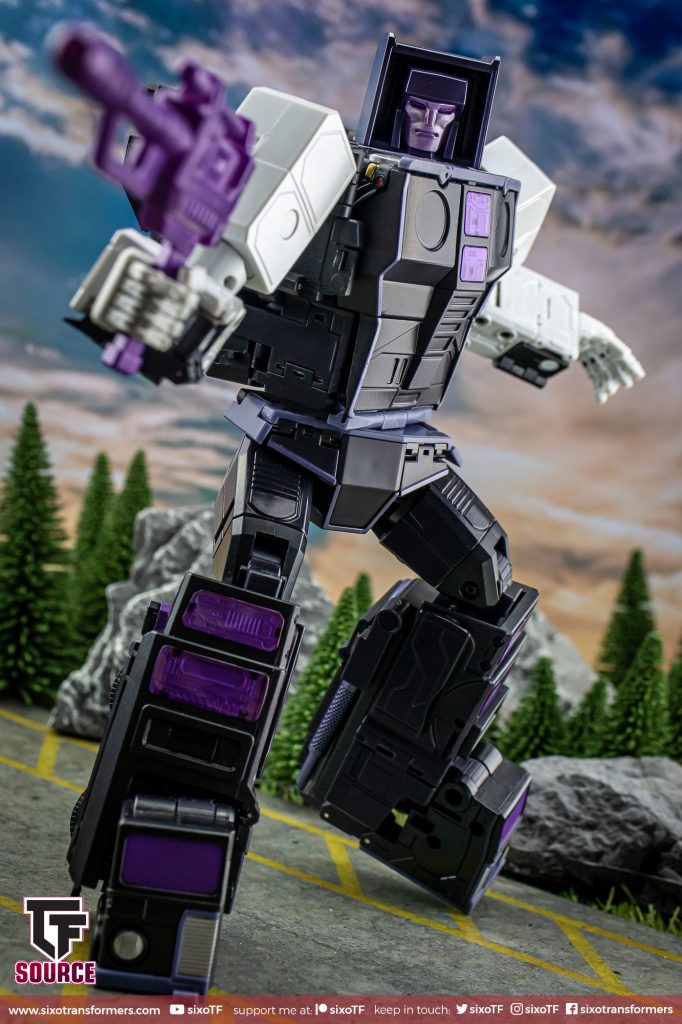 In terms of accessories, Gravestone comes with his purple blaster and his sword, exactly the same as we saw with Roadking. He also features an additional face, moulded to look like he’s shouting, which is an easy enough swap out using a small peg solution. 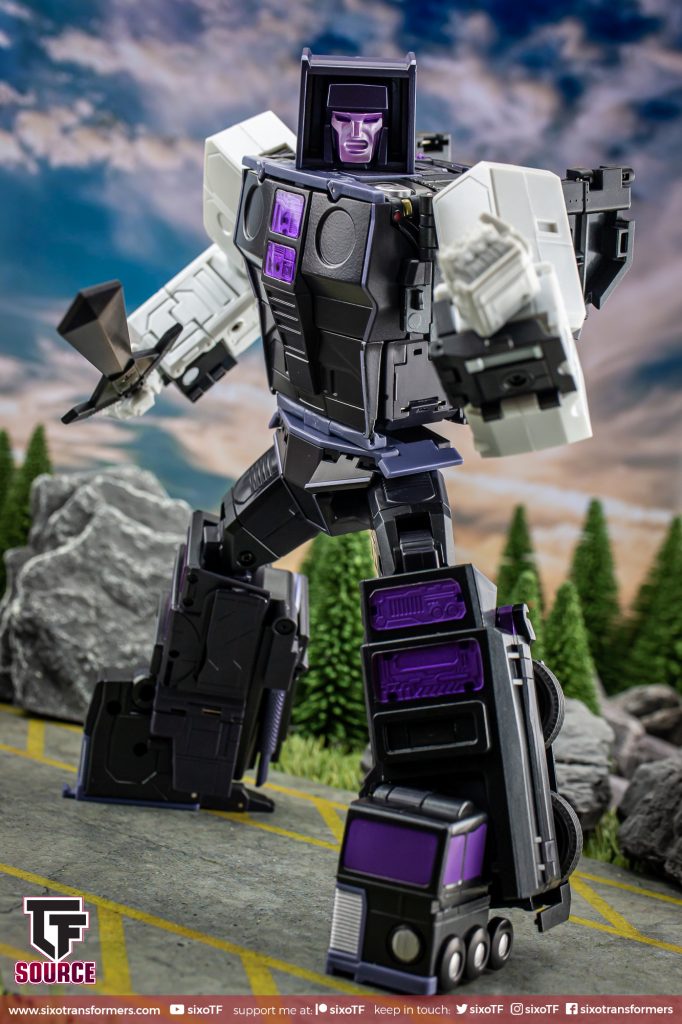 That said, I did have a spot of bother with removing my default face first time as the eyes came unglued from the main face section itself and had to be stuck back together. It was an easy fix but just a touch annoying at the time! 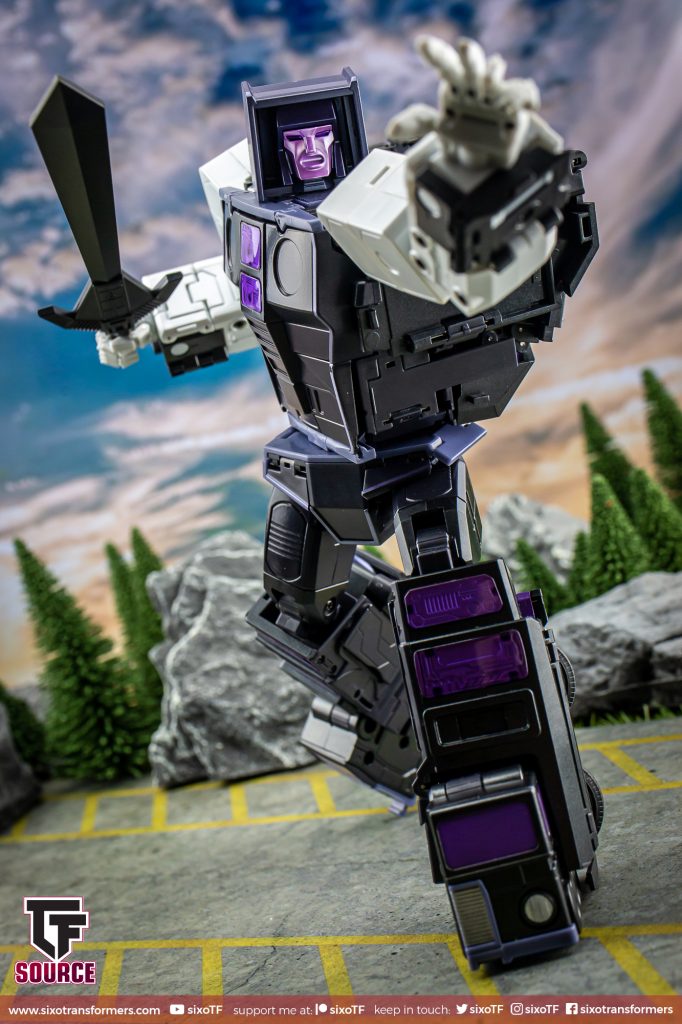 I have also found that whilst the weapons grip ok in the palms of the hands, they can get knocked out fairly easily during play or posing. I had to reacquaint the sizeable gun with the peg hole in his palm more than a few times whilst taking these pics! 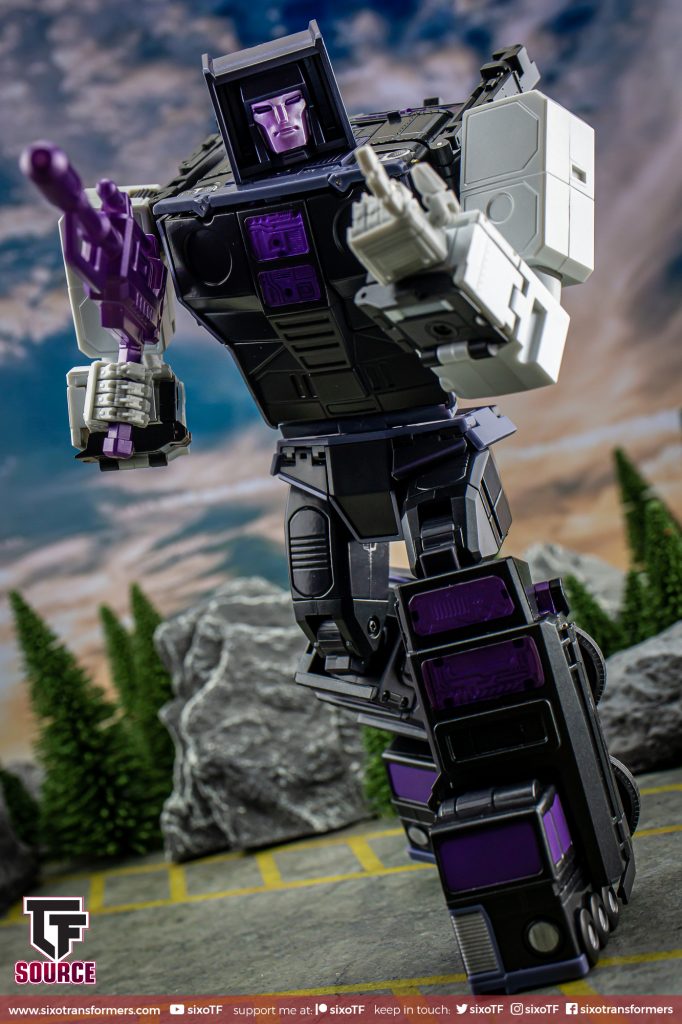 The hands themselves are decent though and allow for a large range of posing as is common with a lot of larger XTB toys. I will say that the splayed fingers are a bit odd but you don’t have to display them like that if you don’t want to! 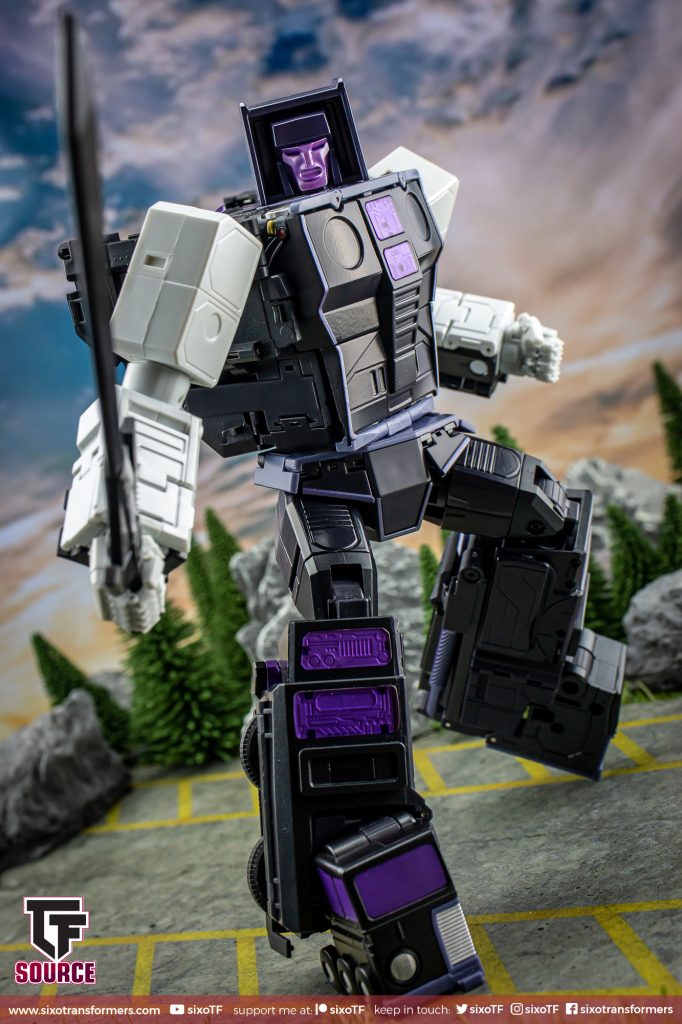 So look, there are some definite nitpicks to be had with this fella here and there in robot mode, but overall I have to say I found him to be a bit of a treat overall. He is a ton of fun and makes for a surprisingly simple yet effective package overall. Plus there’s little doubting that he’s a handsome lad, to say the least. 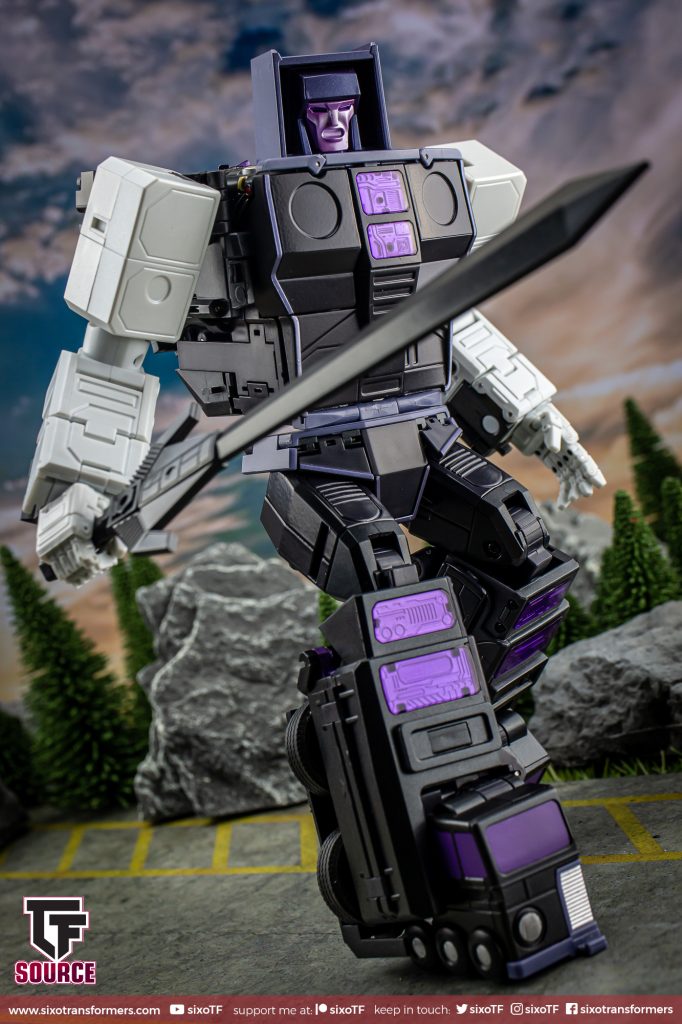 Oh, but of course it’s not all about just him, is it? I mean, let’s take a look at what we’re all really here for… 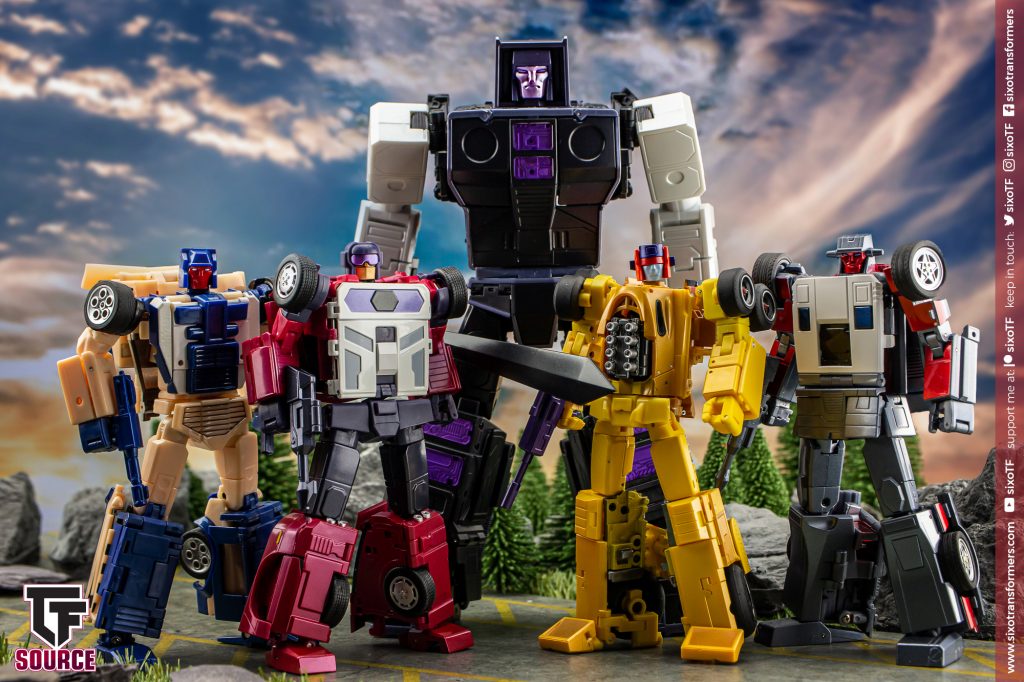 Yep, that’ll do it. The moment we’ve all been waiting for, as we get to see the complete XTB Stunticon line-up together at last. It does not disappoint. 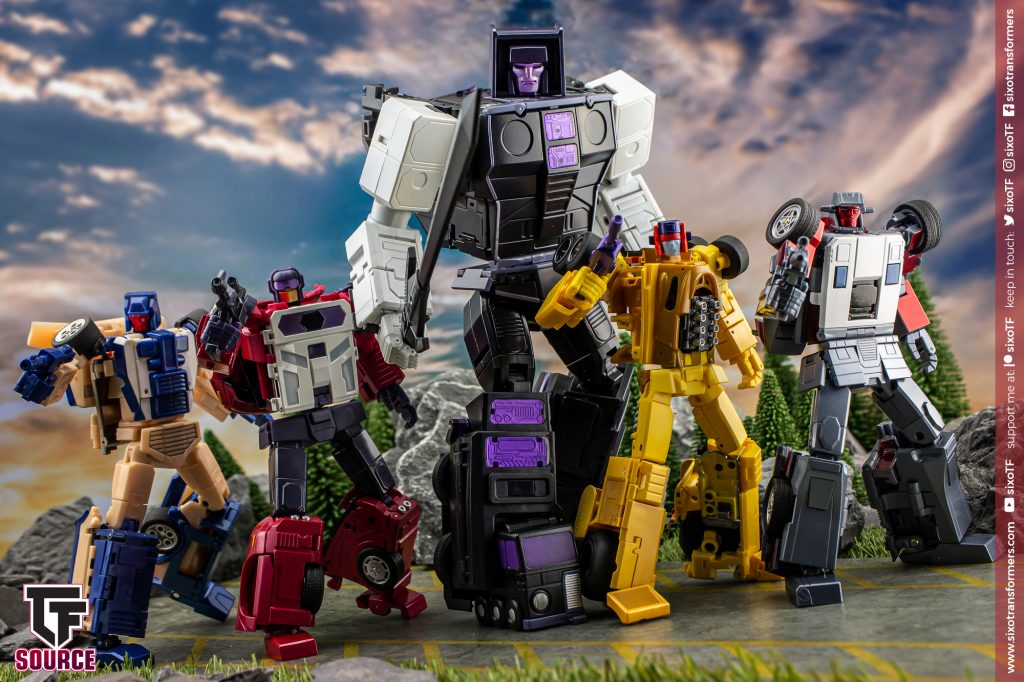 Gotta say, this is a bit of a dream-come-true moment for me. I’ve longed to see someone so ably tackle MP-style Stunticons like this for some time and the result is spectacular. They look just about exactly as you’d expect versus their animation models. What an achievement overall.

I should point out that I didn’t scale the above cartoon pictures to one another though, so feel free to interpret the comparative size of the toys as you wish! 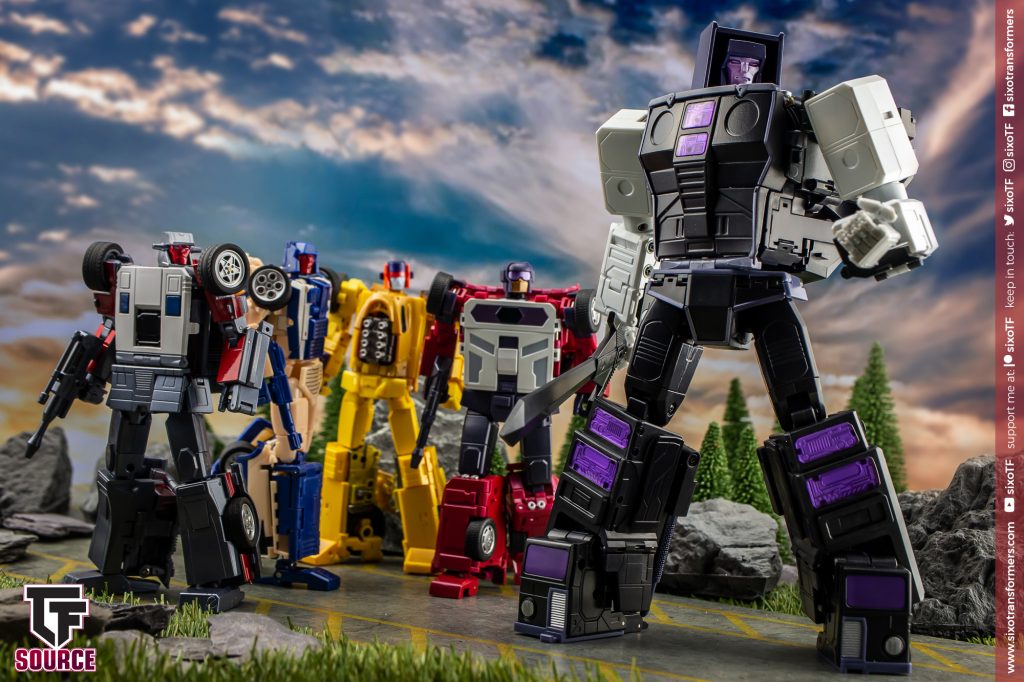 In fact I’ve read many differing opinions on the scale at play for this set, with some thinking that Gravestone is too big versus the cars and others saying it’s perfect. Ultimately it will be up to you to decide what works for your preferences, but I have to say that for me it’s spot on. I always loved the idea of Stunticon toys that could go head-to-head with Optimus Prime and the carbots, and to that end X-Tranbots have nailed it. 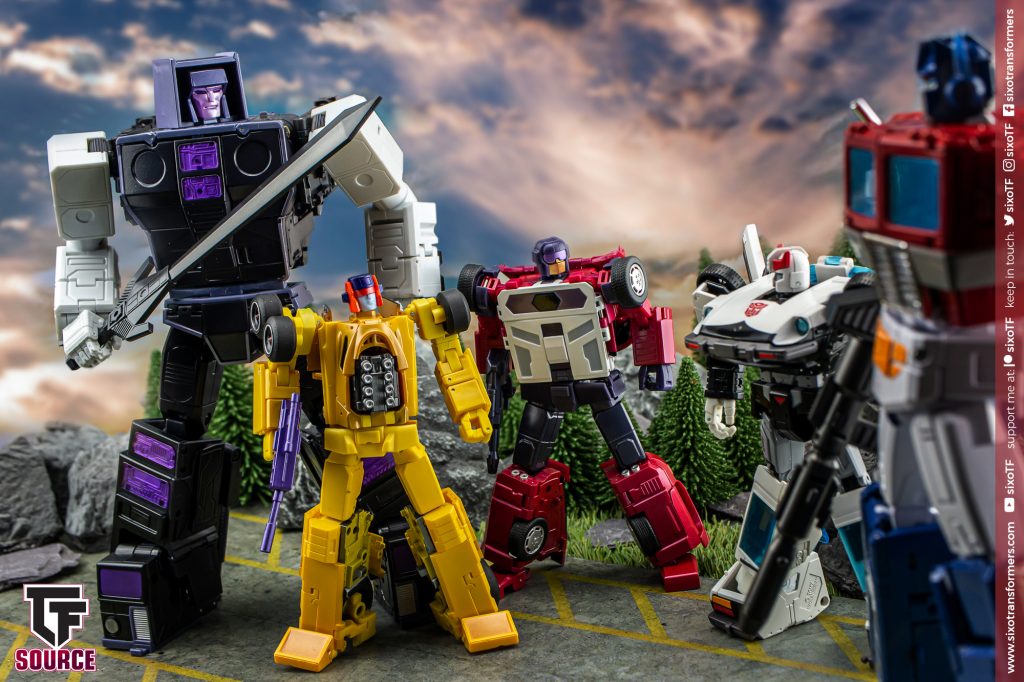 Whilst other competitors have chosen to upscale the individual cars to be Seeker-size or larger, I can’t help but think this works really well. If anything it’s probably one of the key deciding factors when choosing which of the current available options you might like to go in on. 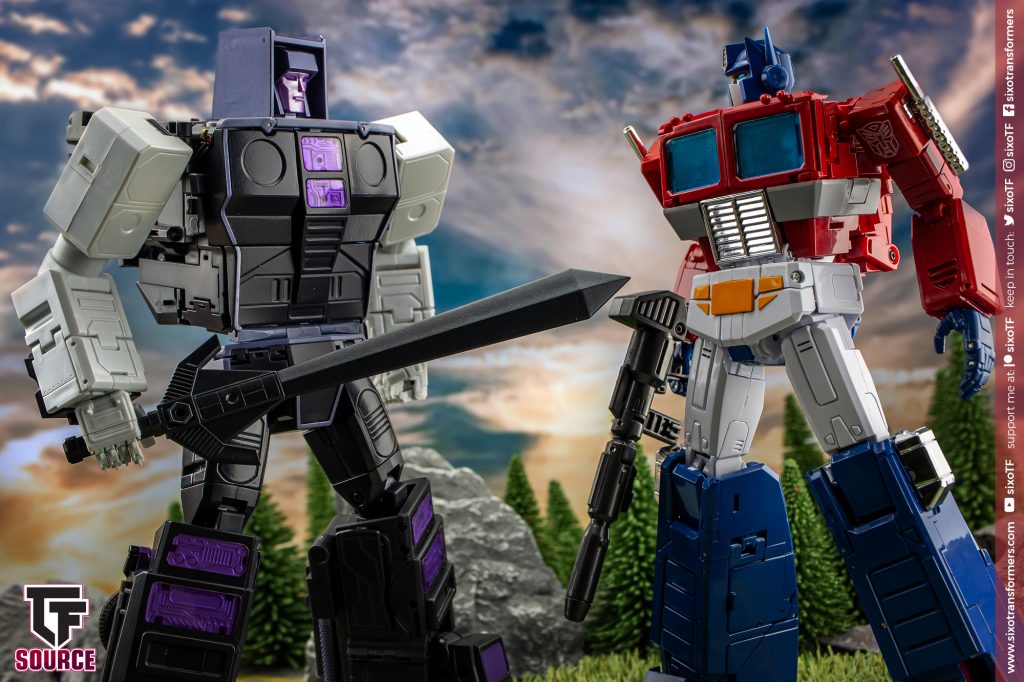 Gravestone stands essentially at eye level with the likes of MP-44 Convoy, and looks dandy alongside him to boot (even if the toy was clearly designed around MP-10, as we discussed last time). 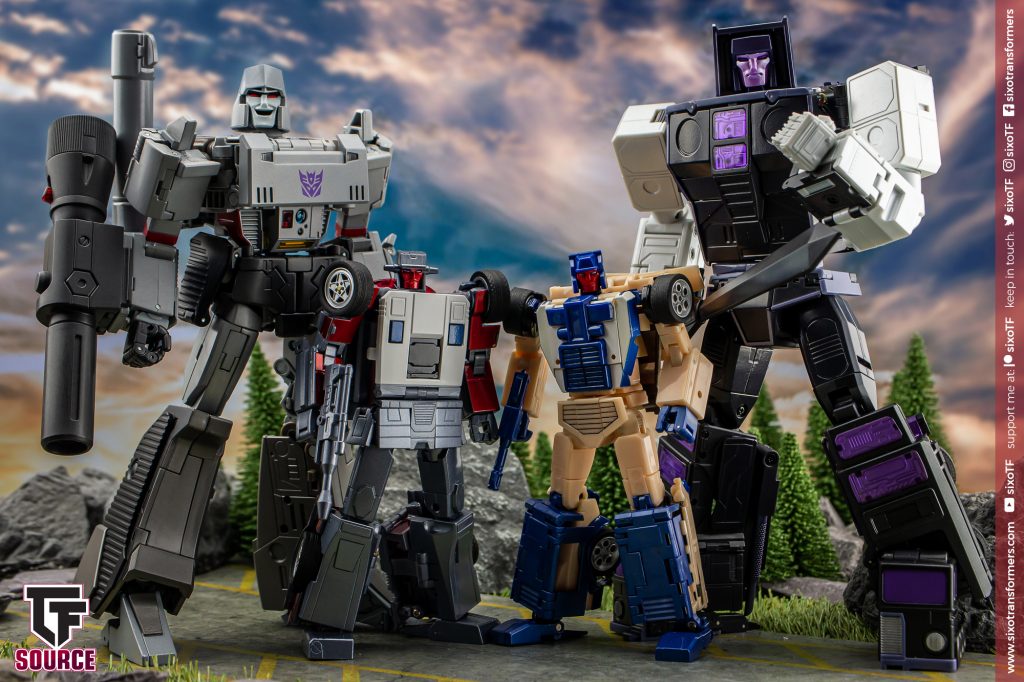 I also think that Gravestone and the other lads do a cracking job standing next to the likes of MP-36 Megatron and other Masterpiece-styled Decepticons. It’s great to finally see these characters filling out the shelf! 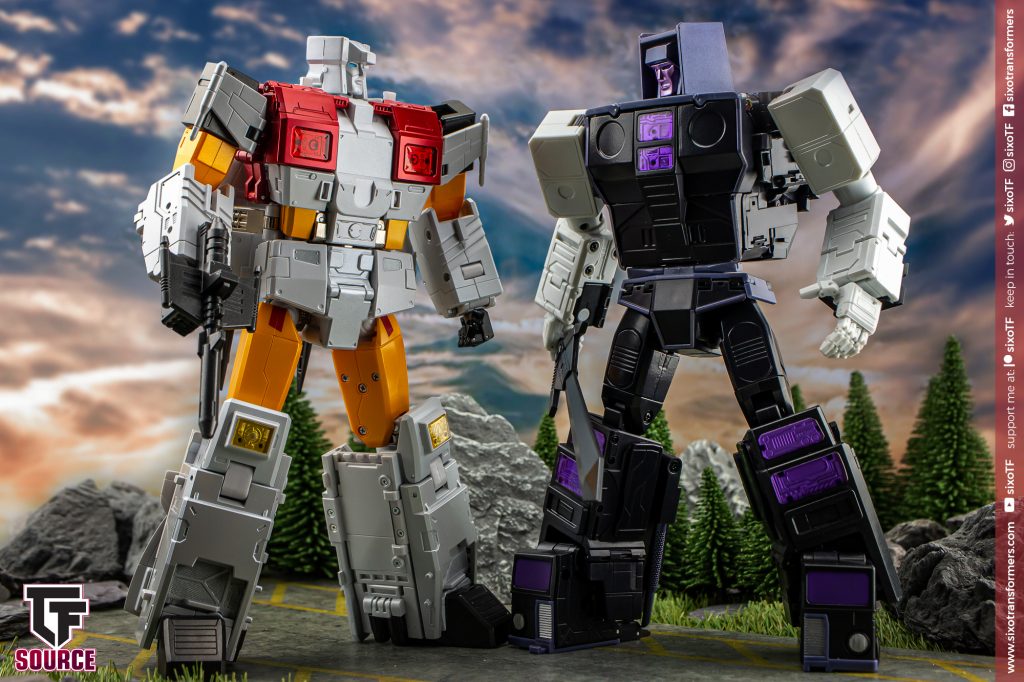 Oh and if you were thinking to mix and match sets from different companies, then you could do worse having FansToys Maverick as the Silverbolt versus XTB’s Motormaster. They stand about the same size as each other and work surprisingly well! 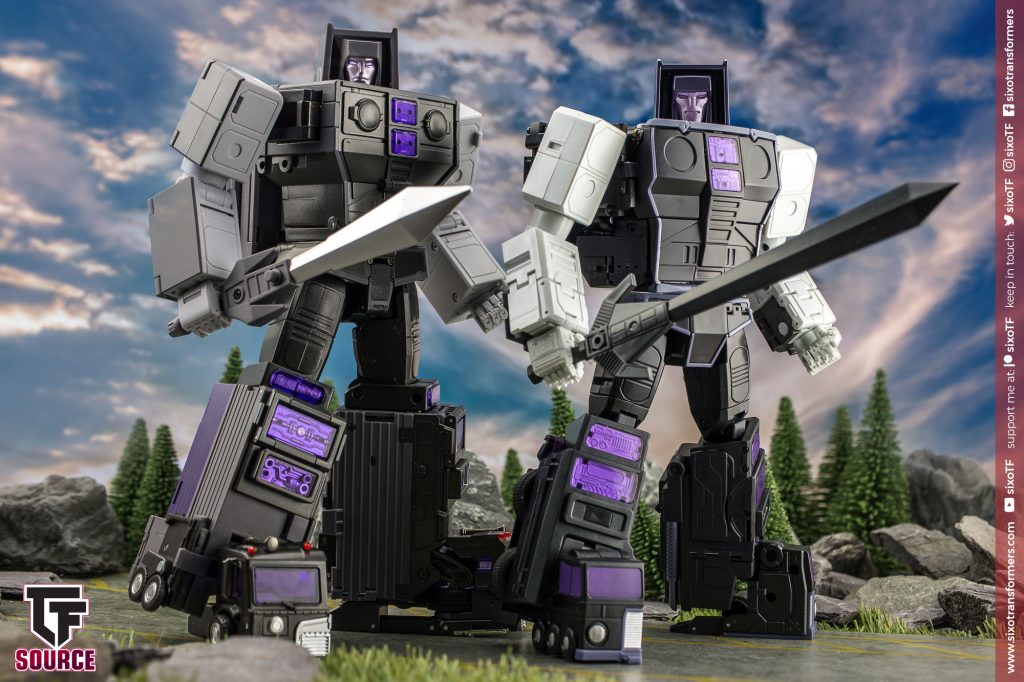 As a final comparison here’s the shot of Gravestone versus FansToys Roadking that we talked about in that review. As I said at the time, they’re both good-looking robots that do different things well, so it’s hard to say definitively which one is “the best” over the other, in all honesty. I do think that Gravestone benefits from having the cleaner lower body and not having that visual break of some of the faux cab wheels rotating out of orientation on the ankle tilt, as you see on Roadking. 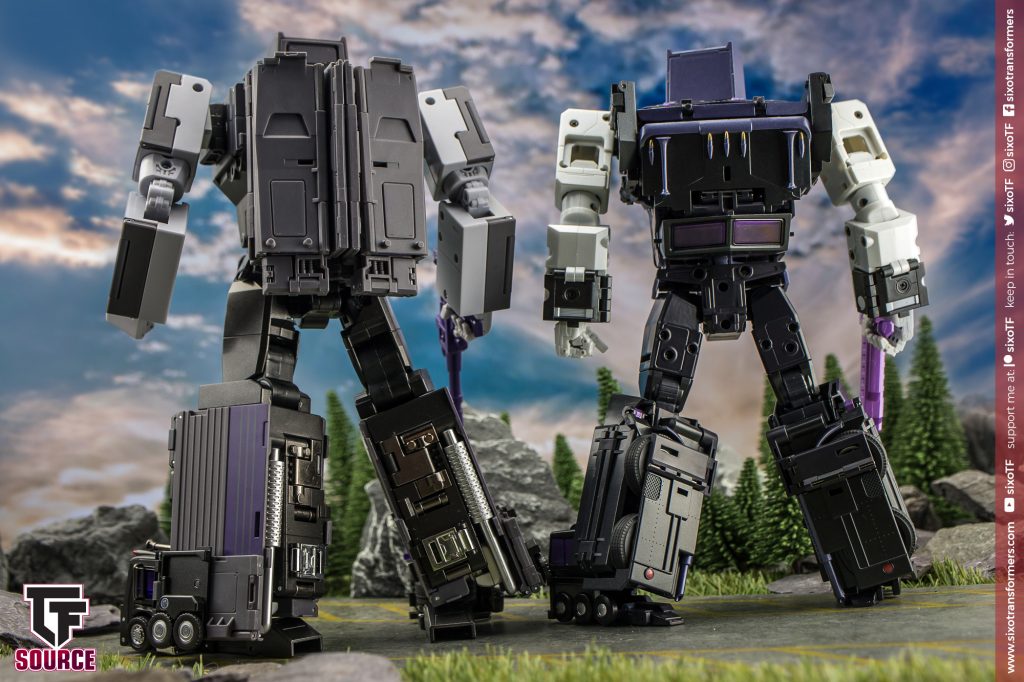 Again, Gravestone isn’t having to pack away quite the bulk that Roadking is on a rear view either, but considering how different their transformation schemes are they both pull off the purpose of their individual designs very well. Ultimately it will be up to you to decide which one works for you, although I guess it will also be interesting to see how the various options for all these teams shake up once we’re able to combine a few of them. Then it might even be a question of deciding which ones get to stay in robot mode, for those of you who’ve double (or triple) dipped! 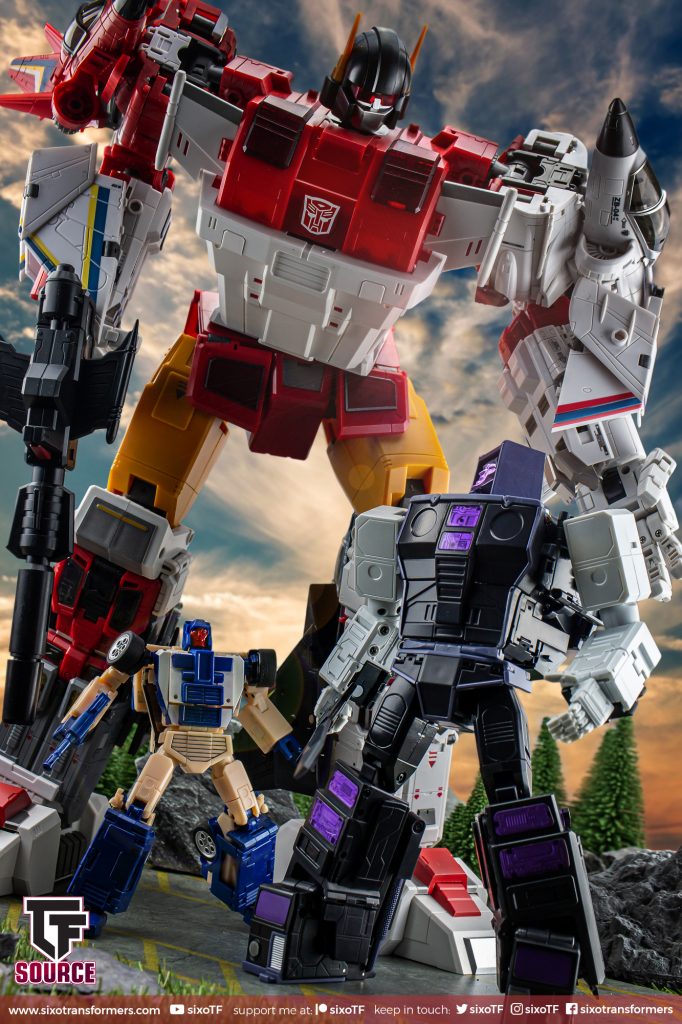 So that’s Gravestone! Overall he’s a nifty rendition of the character, although I’m sure like me many of you will be keen to see when the trailer section will eventually be released, not least because we’re all itching to get on with combining up The Big Man. For now my Zeta Toys Superion looks like he has the upper hand…

WHAT’S HOT? Both modes look pretty ace and do a great job at recalling the character from his animation appearance. The transformation is also surprisingly non-fiddly and overall the toy is a quality production.

WHAT’S NOT? I had a few small niggles like the eyes needing to be glued back inside the face and the weapons could be more secure in his hands, but overall nothing major. The robot mode rear view might put some people off.