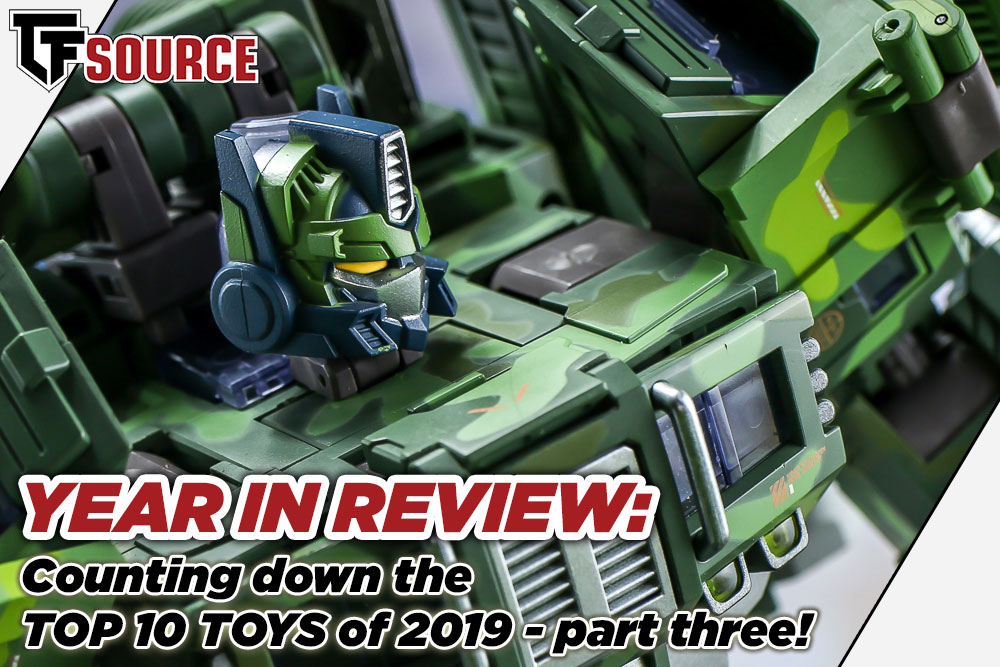 We’re back for the third and final part of my review of the best new toys from last year, all handily summarised in the form of a top 10! If you missed them, be sure to check out part 1 and part 2 of this list first, before continuing below. All that remains is to count down my final 3 toys from the last twelve months, with a couple of special mentions along the way. Here we go! 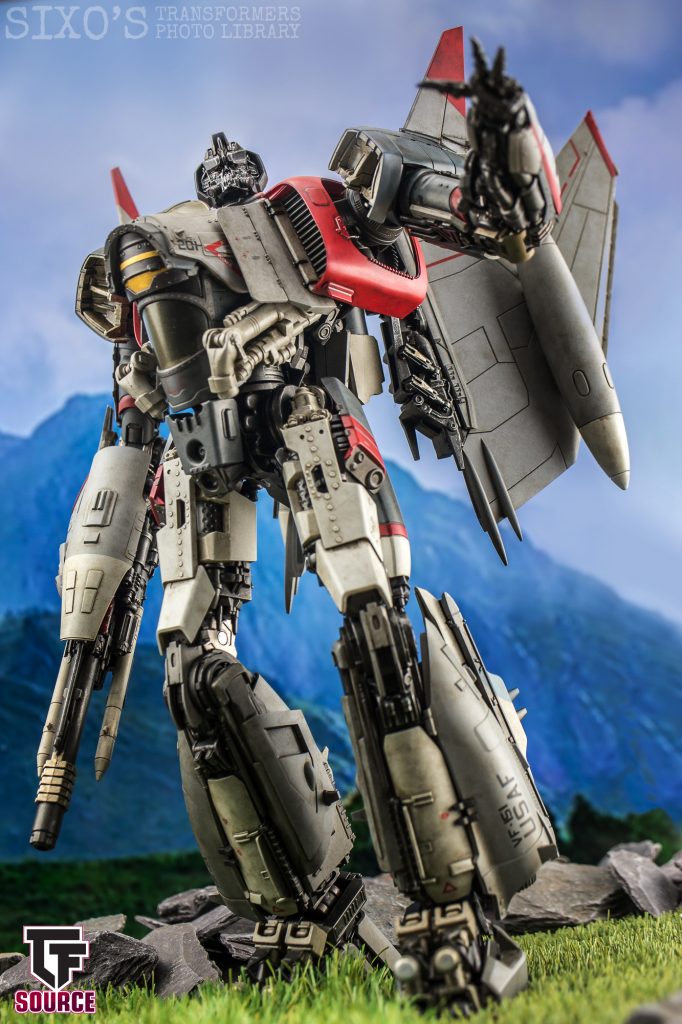 “But it doesn’t transform!”, someone will inevitably cry, to which I simply crack a wry smile and shrug, “so?” When you have toys that are this superbly-designed, this well-made and this well-executed, it’s easy to look past something like the lack of an alt’ mode. And believe me, I never thought I’d be saying that myself! 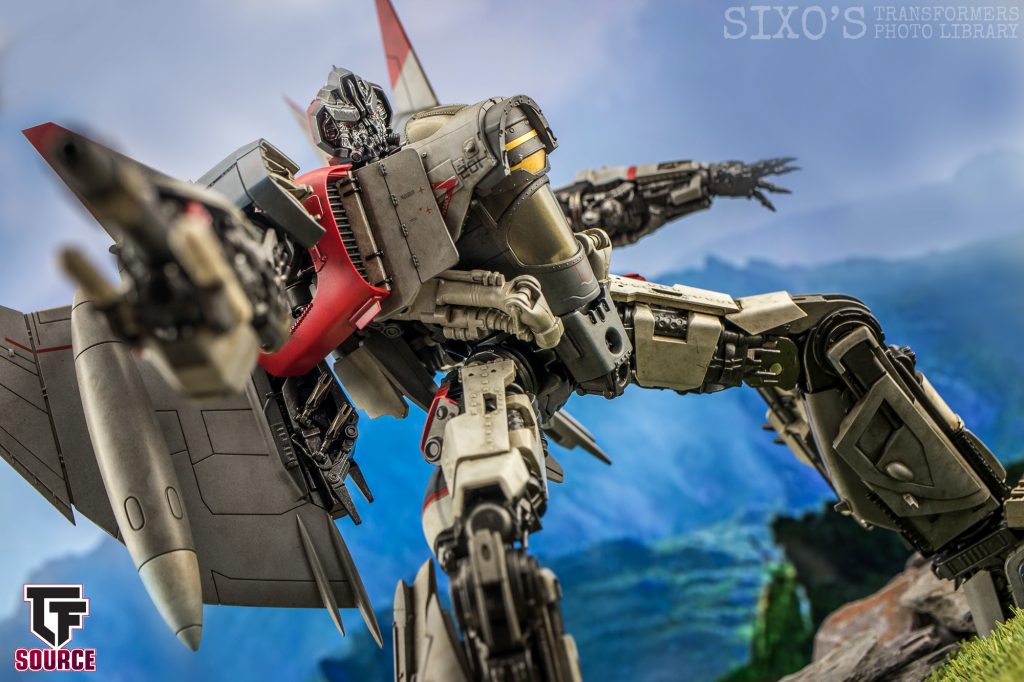 Sure, I enjoy stuff like Generation 1 Action Masters, but the idea of a non-transforming yet hyper-articulated, ultra-detailed and screen-accurate representation of a C-list character from the first act of the latest live action movie wasn’t something I was necessarily pining for, I’ll admit. Then I saw the thing and was instantly skewered with delight. Having never come across 3A’s (or ThreeZero’s) toys in person before, I went from skeptic to convert in a matter of seconds. Of course that’s also partly thanks to this toy kicking off a new “Deluxe” scale in the line, whereas the previous toys were all massive and seemingly a bit unfeasible. 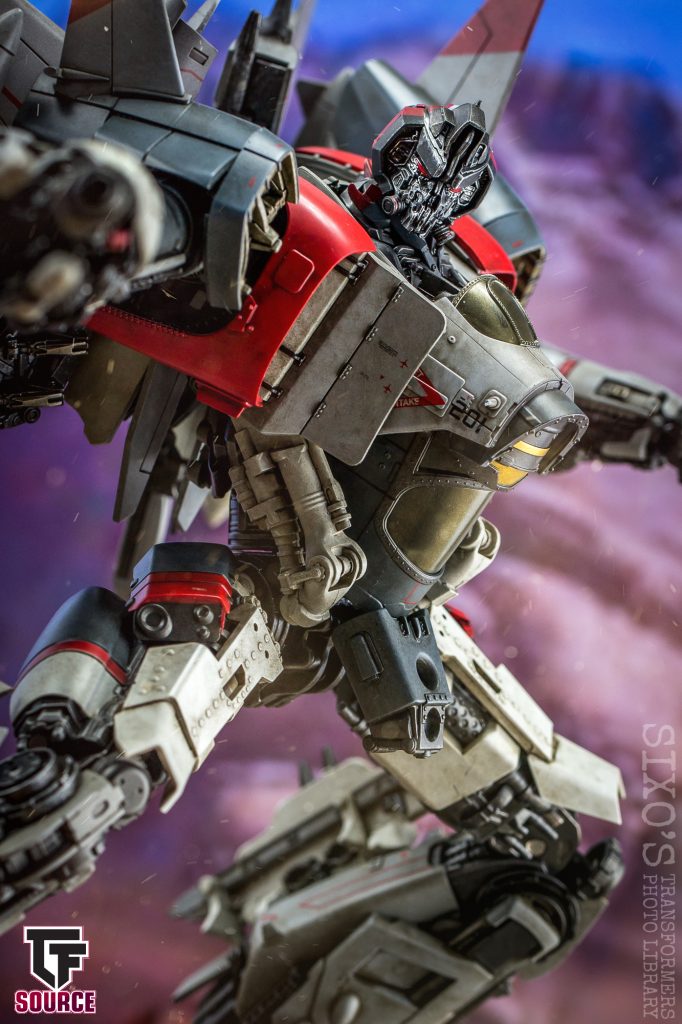 Here’s the thing, I think you need to hold this thing to fully appreciate it. Yes, it looks stunning in photos, but I can’t help but feel that some folks are still kinda expecting a Masterpiece toy but without the conversion to alt’ mode. But this is so much more than meets the eye (pun completely intended) in terms of the build quality and design that really, it’s an unfair comparison either way. 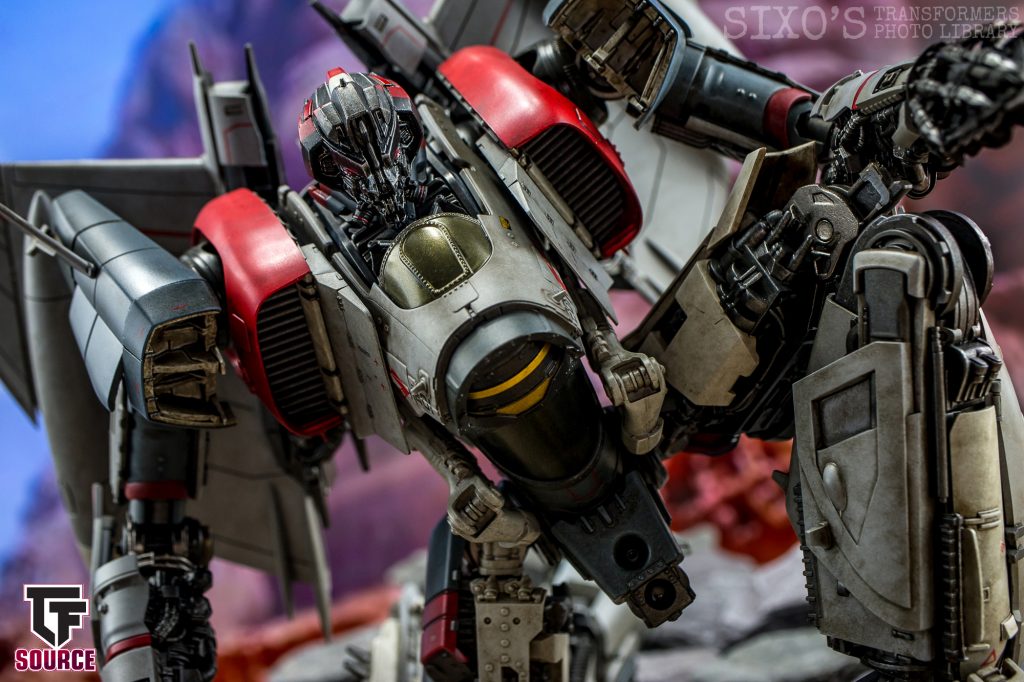 So yes, I’m sure that not all of you are convinced, but if you’re at all on the fence then I really can’t recommend this guy enough. And what’s even more exciting is that there are more toys to come in this line, all officially-licensed. I’ve only just recently acquired Optimus Prime and am already looking forward to Soundwave this year. 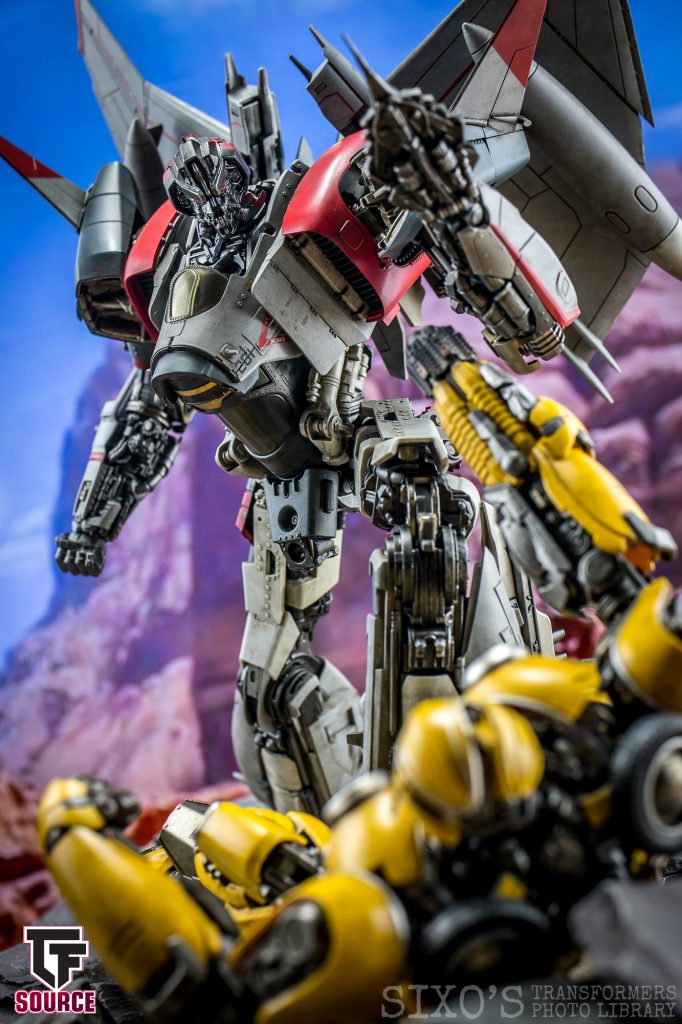 In the meantime, I remain completely enamoured with Blitzwing, and have absolutely no hesitation in giving him such a high spot in my top 10. Superb. 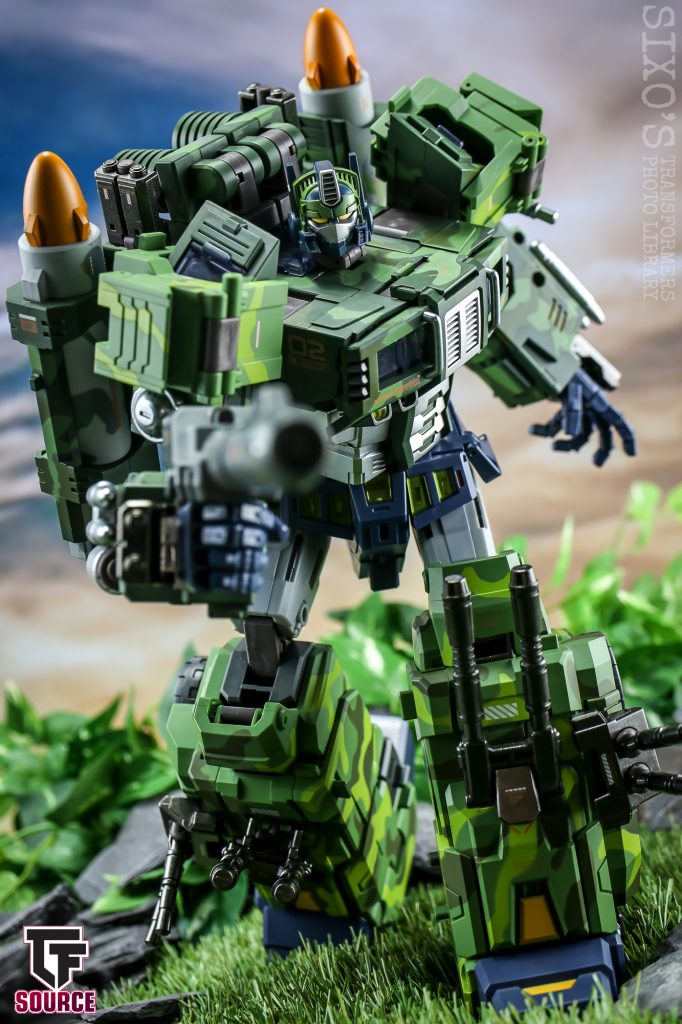 There’s just something about this design that captured my eye straight away. I don’t know if it’s the hulking proportions, the camo paint scheme or ALL THE GUNS but boy, he’s something to look at, ain’t he? Optimus Prime has a habit of nabbing a lot of the really awesome alternative designs, but this lad takes the biscuit. 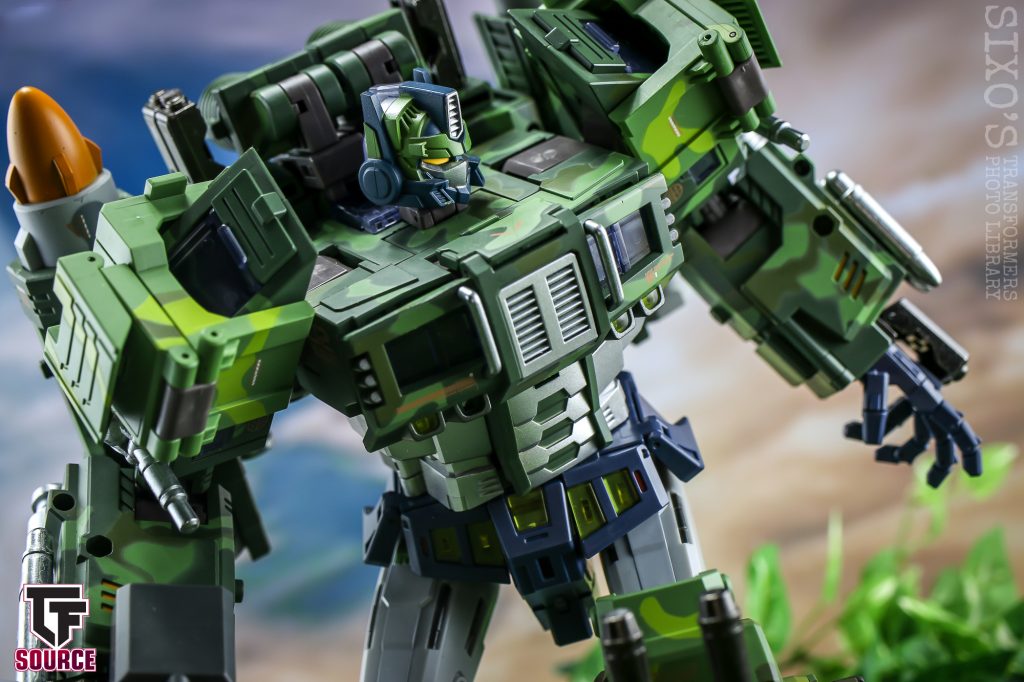 So what is this thing, anyway? I get asked that question every time I share a picture of it, I think, but the answer is at least relatively simple. Some years ago, legendary Transformers artist Don Figueroa shared a piece of artwork that imagined an Optimus Prime that transformed into the classic GI Joe Rolling Thunder toy. It caught a lot of attention for mashing together two beloved franchises in such a unique way, and now third party outfit TFC Toys have realised it in all its glory. 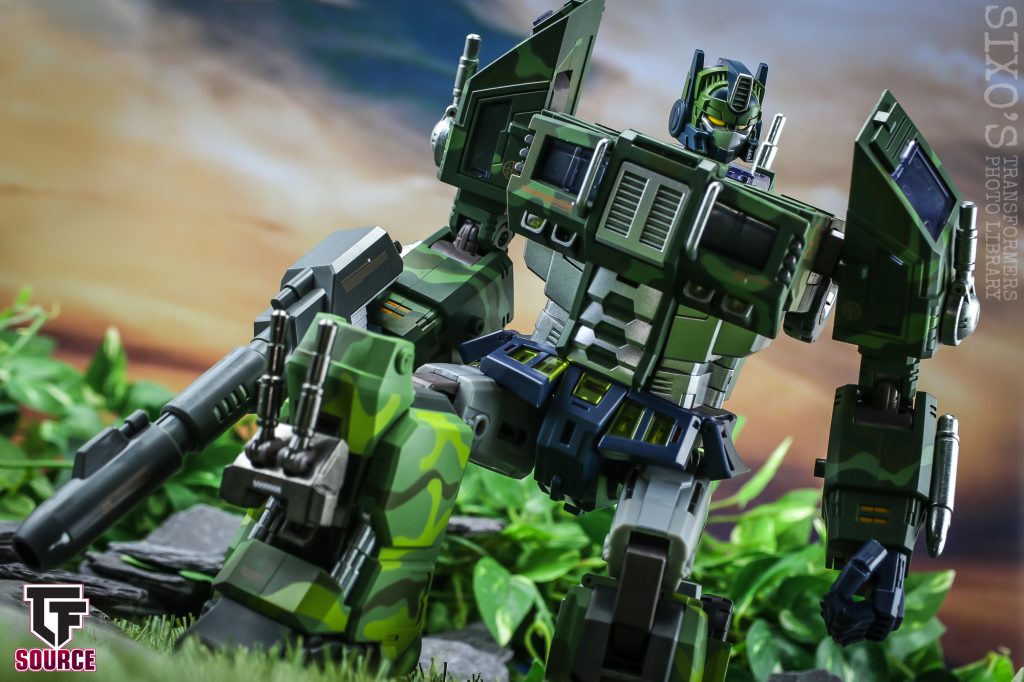 Still with me? Well, even if that explanation means nothing to you, hopefully the photos of this wonderful toy might be enough to convince. For TFC have created a total marvel with this product – not only is it simply immense to behold, but it’s well-made and fun too. Boasting a heft that most FansToys products can only dream of, it’s hard not to be immediately struck by its sheer presence  right out of the box. Yet almost a year since I first owned it, I still find myself going back to have a play again and again. 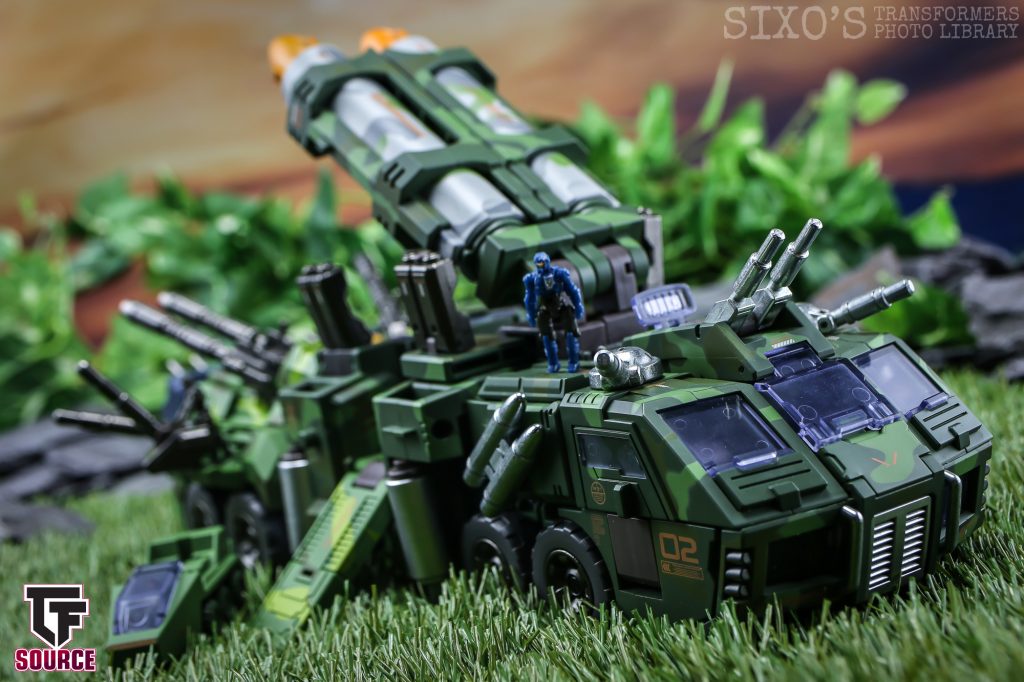 A big reason for that is just how many gimmicks and features it boasts. Sporting both a regular and souped up robot mode is nothing new, but this guy does it better than most. Then there are all kinds of combinations that can be achieved with the various weaponry and accessories on offer, really leaving you spoilt for choice in how best to display him. The fact that he works with TakaraTomy’s Diaclone mini-figures is just the cherry on top. 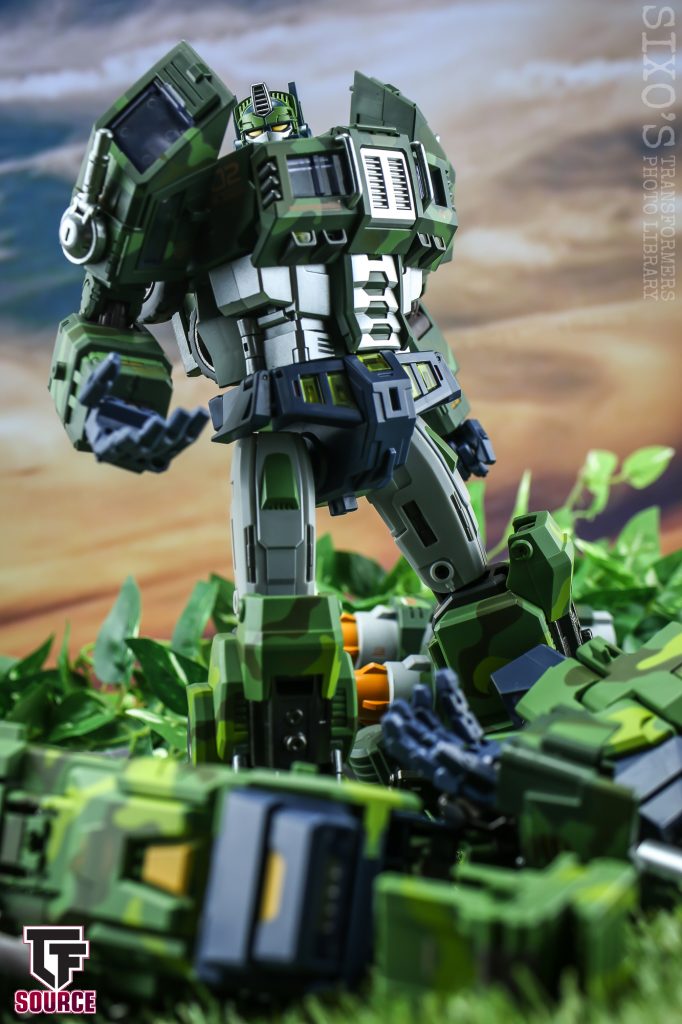 I was excited for this toy before it arrived, but I really didn’t expect it to pack this much punch. In a way, I’m kinda surprised myself to be giving it the #2 slot this year, but here we are. It’s the best third party toy of 2019. 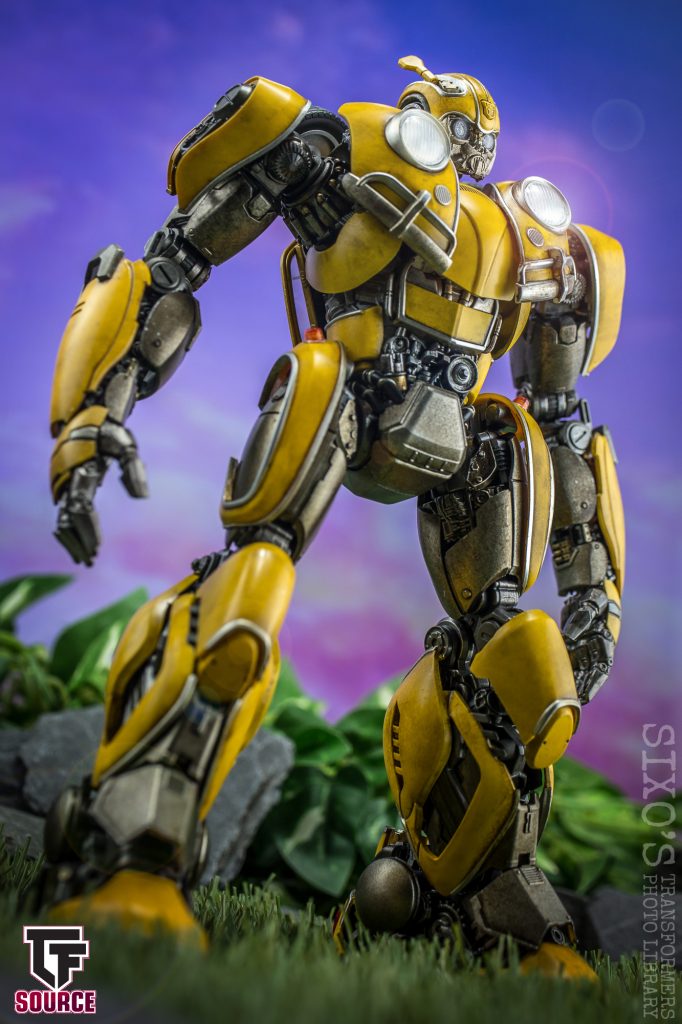 It wasn’t just Blitzwing that caught my attention from 3A last year – Bumblebee is also worthy of an honourable mention, and brings that on-screen design to life in a way the Masterpiece toy just never did. As much as I liked that design (it featured on my top 10 of last year, after all), I don’t mind admitting that the new 3A toy has put it in the shade. 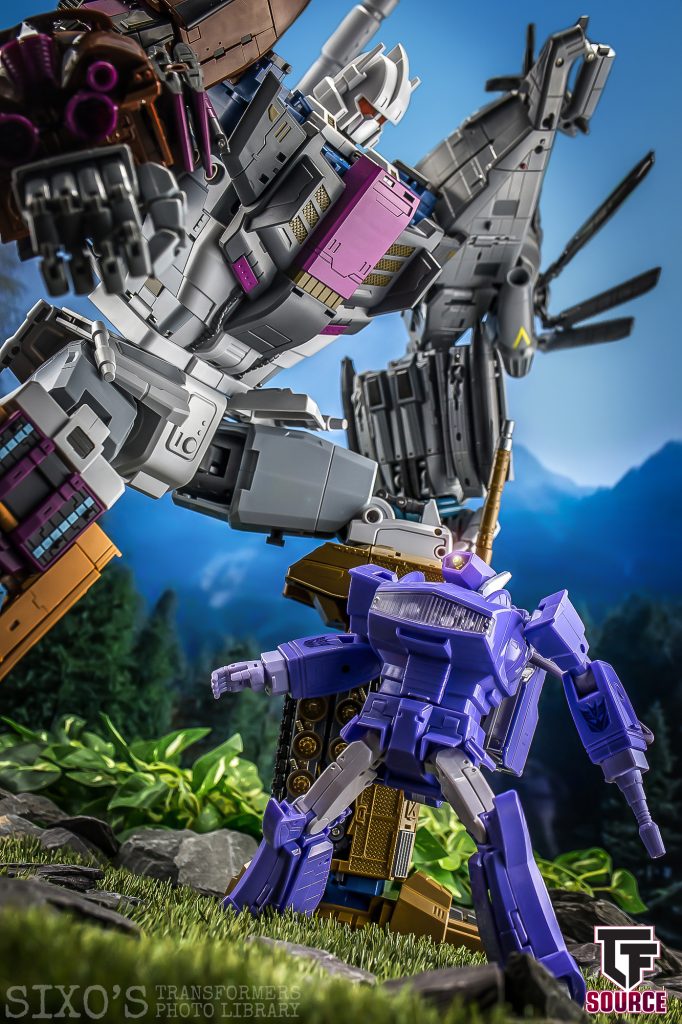 I resisted the lure of Zeta combiners for as long as I could, but when the company finally unveiled their Armageddon design in repainted cartoon colours it wasn’t long before I cracked. All of the nitpicks I’d perceived from photos turned out to be true, in that I’m not overly fussed about the individual robot modes as they don’t match my aesthetic preferences, but boy does that combined mode more than make up for it. The sheer size of it alone is a sight to behold! 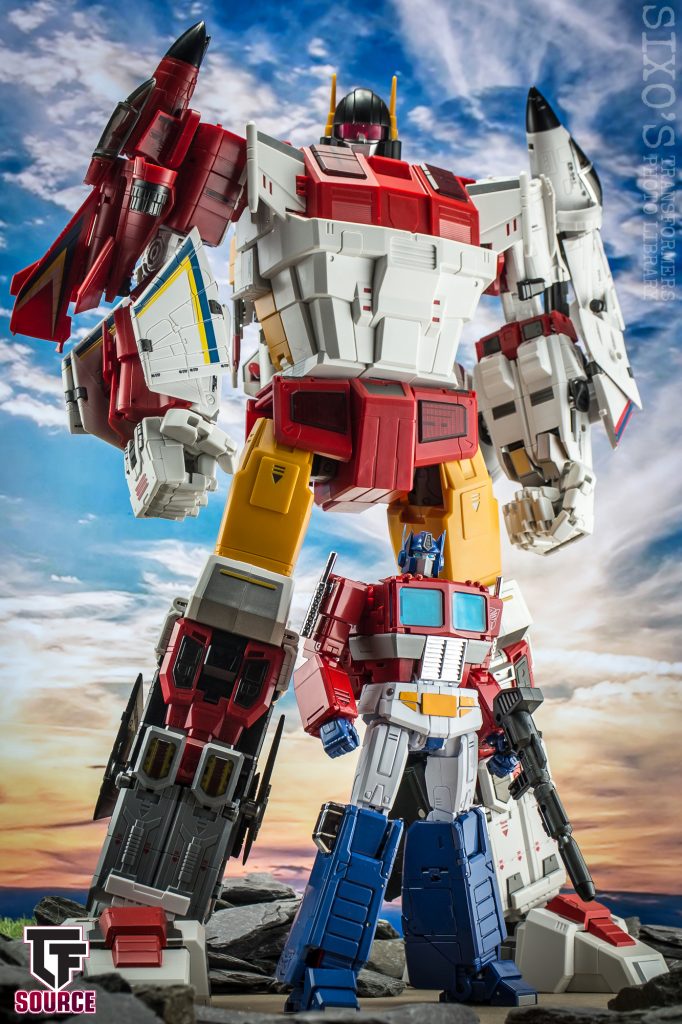 Of course it wasn’t just Bruticon that shook things up in 2019. I’d long been lusting over the Zeta Kronos combined mode, but had managed to resist until I saw it in person at TFN in August and then it was somewhat inevitable. Again, the individual ‘bots are take-them-or-leave-them for me, but it’s the combined mode that really makes this package a win. FansToys are doing a great job with their set so far, but they’ll have to really stick the landing to knock this massive chap out of the air. 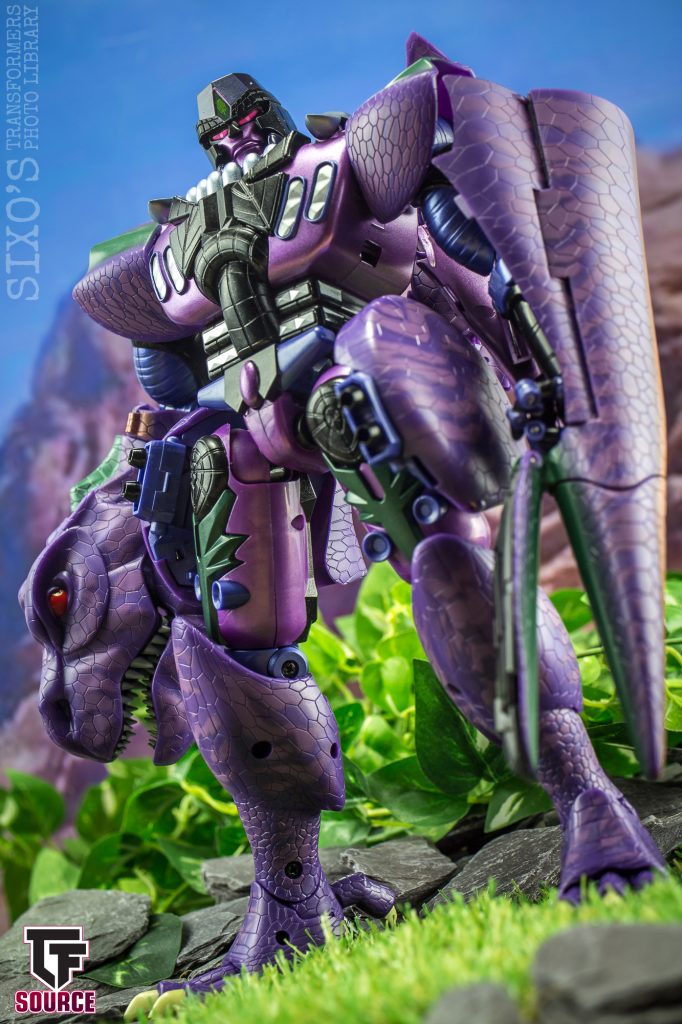 Whenever I’m writing these lists, it doesn’t usually take me too long before I decide which toy is going to fill the top spot. There’s normally one toy above all others than just stands out as being worthy of being called the year’s best. So it was with 2019, as MP-43 Megatron fully earns the title of Masterpiece. 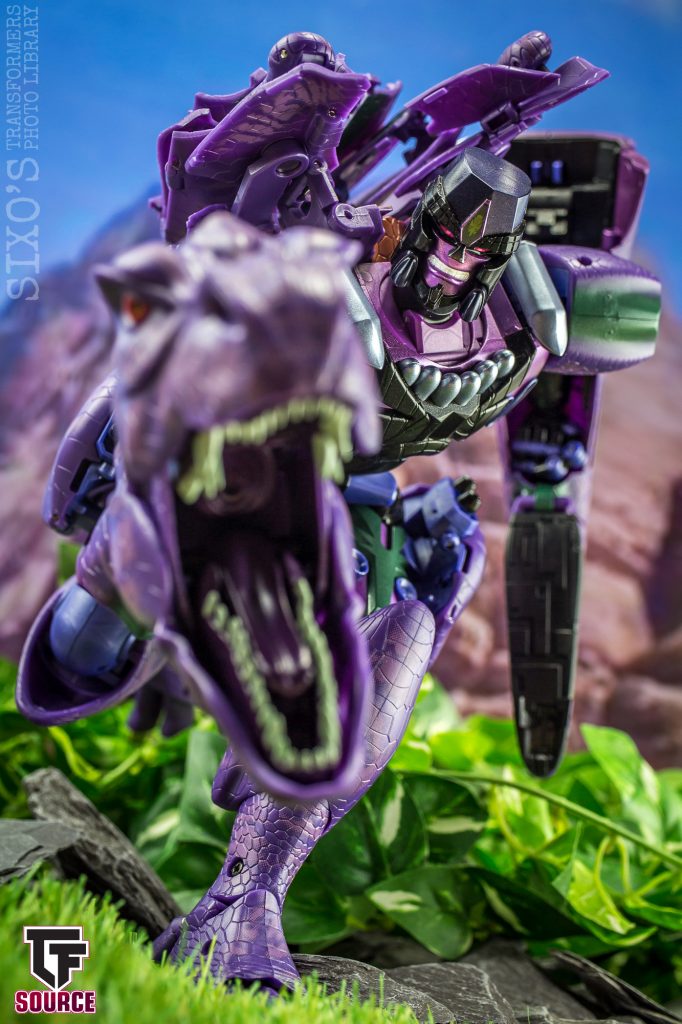 I know I keep saying it, but for all the debate the MP line is currently creating (be it the design philosophy, engineering or plastic quality), the Beast Wars component feels like a sure and steady hand right now. Each and every figure that is put out under that banner is like a confident masterstroke from TakaraTomy, and Megatron is anything but an exception. 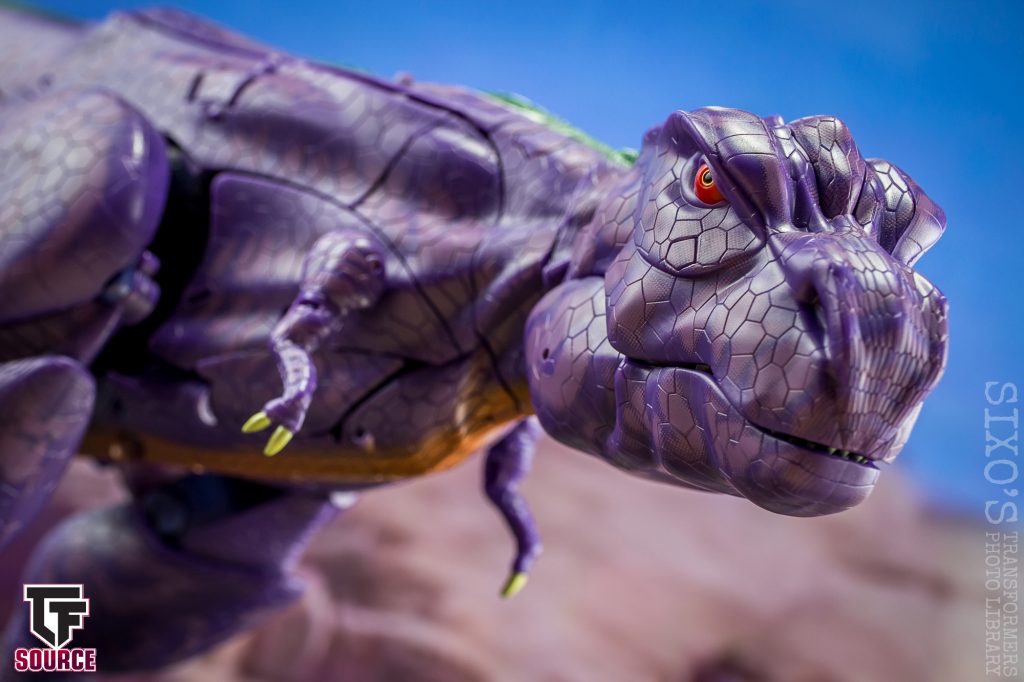 I mean, just look at him, no? Two modes that so ably capture the on-screen likeness of the character to absolute perfection. I defy anyone to look at this thing and not hear David Kaye’s silky smooth tones ringing between their ears. Every inch of the design is faultless, and even manages to collapse the backpack in a logic-defying manner that resembles the show. 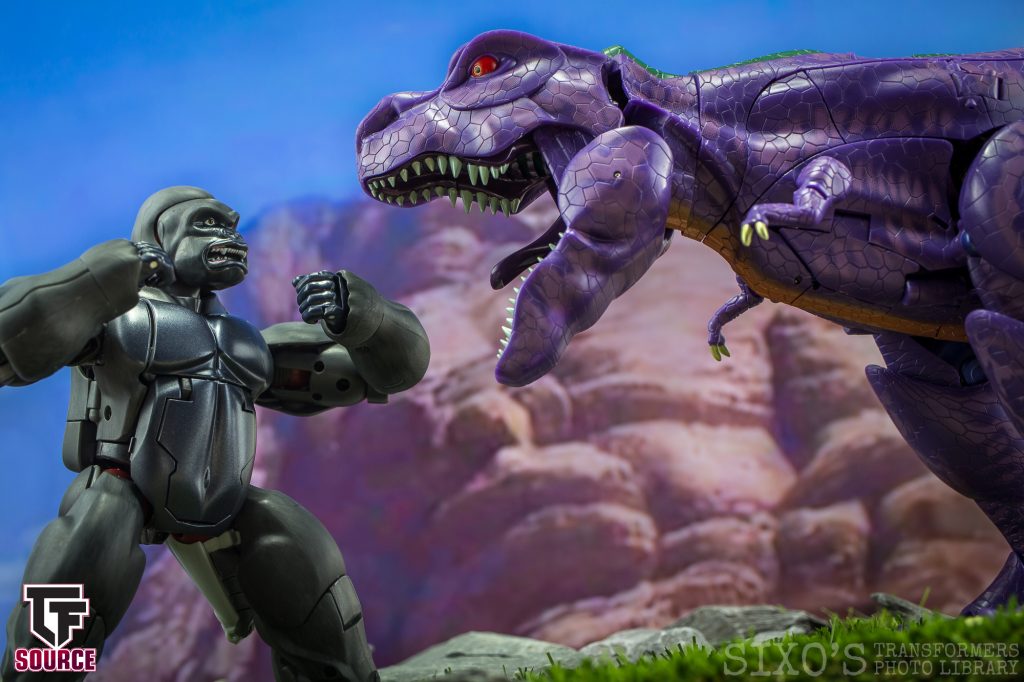 So yes, there have been concerns about breakage with this guy. Some collectors have reported cracking crotches (ouch) and others have expressed concern about the thinner panels of plastic used to create the main dinosaur body. I can only speak from personal experience when I say I haven’t had any of those problems myself, finding Megatron to be nothing shy of a total joy from start to finish. 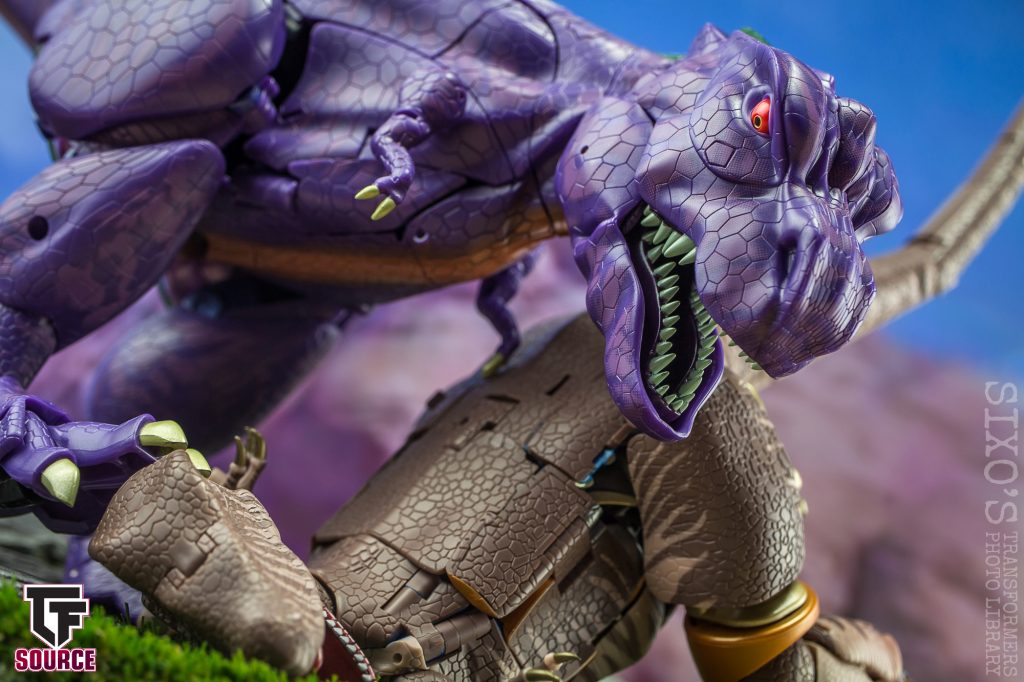 In fact my only minor complaint is that I wish the waist swivel on my copy was just a touch tighter than it is, something that could well be remedied with a touch of floor polish. Overall though he’s a stunning example of the Masterpiece line at its very best, and fits in perfectly with other Beast Wars toys. 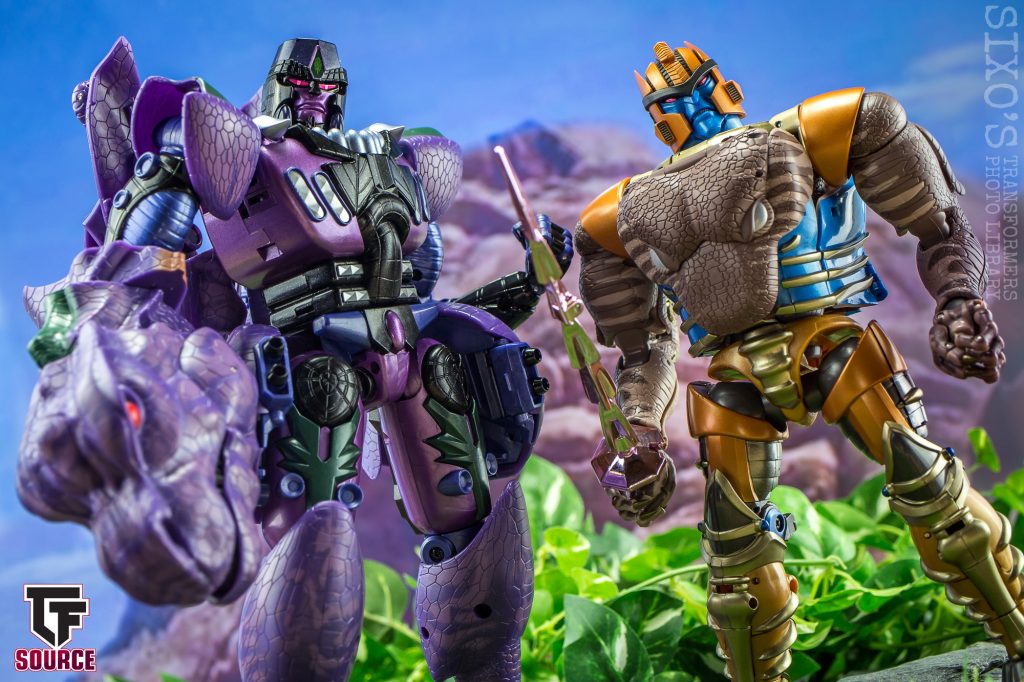 I had a real tough time last year deciding whether to give Dinobot the top spot or not. It came very close but in the end I put him in at number 2. In many ways seeing these two toys together makes me love each of them all the more, and even making me think that if there was only one corner of the MP line I could carry on collecting, it would be Beast Wars. 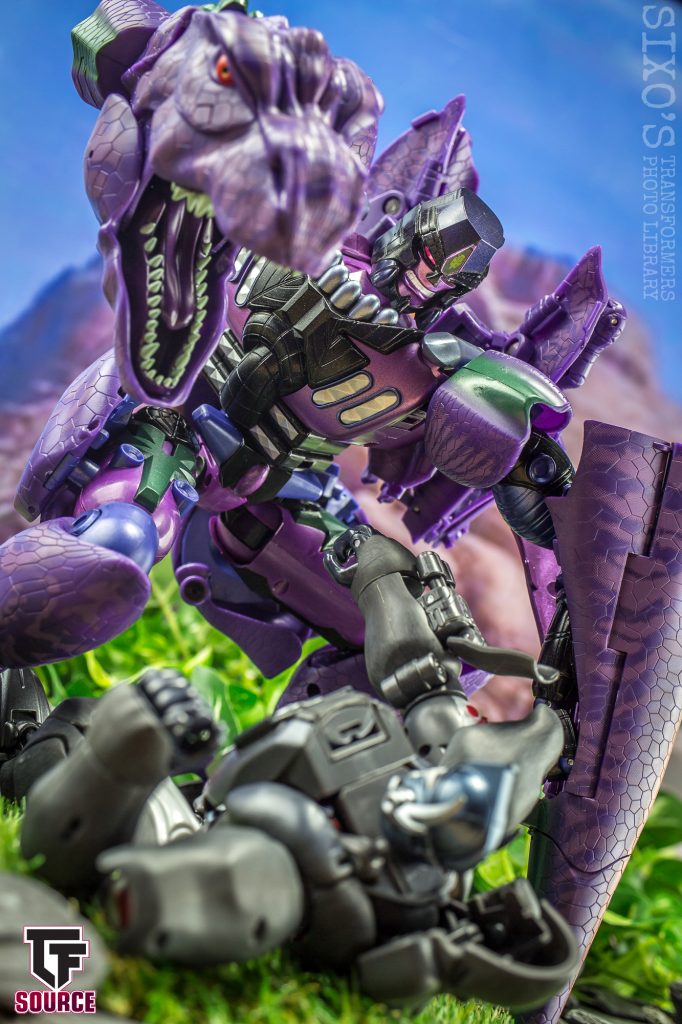 So there you go – that’s my number one! Here’s hoping that TakTom continue past the upcoming Lio Convoy and bring us many more Beast Wars designs for years to come!

So, that’s my list! Do you agree with my choices? Thanks for reading and have a great 2020!