BOX ART BREAKDOWN: all the action from the 1985 & 1986 #TFBoxArtChampionship leagues 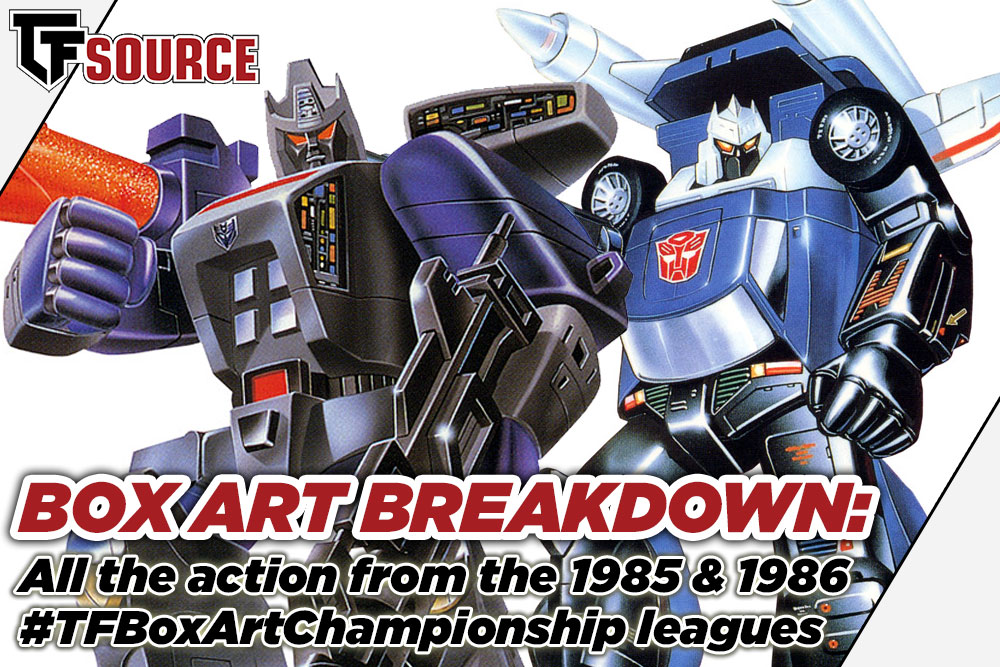 Earlier this week we brought you an overview of the #TFBoxArtChampionship, including a rundown of the original 1984 league, in anticipation of the upcoming 1988 championship which starts this Friday! Still no idea what we’re talking about? Well you should check out the first part of this series before continuing below then!

Right then, the #TFBoxArtChampionship is back… and this time no force in the universe can stop it!

Today we’re going to be covering the 1985 and 1986 leagues, and then on Friday we’ll be back to go through 1987 before unveiling the 1988 brackets ahead of the new competition. How exciting! 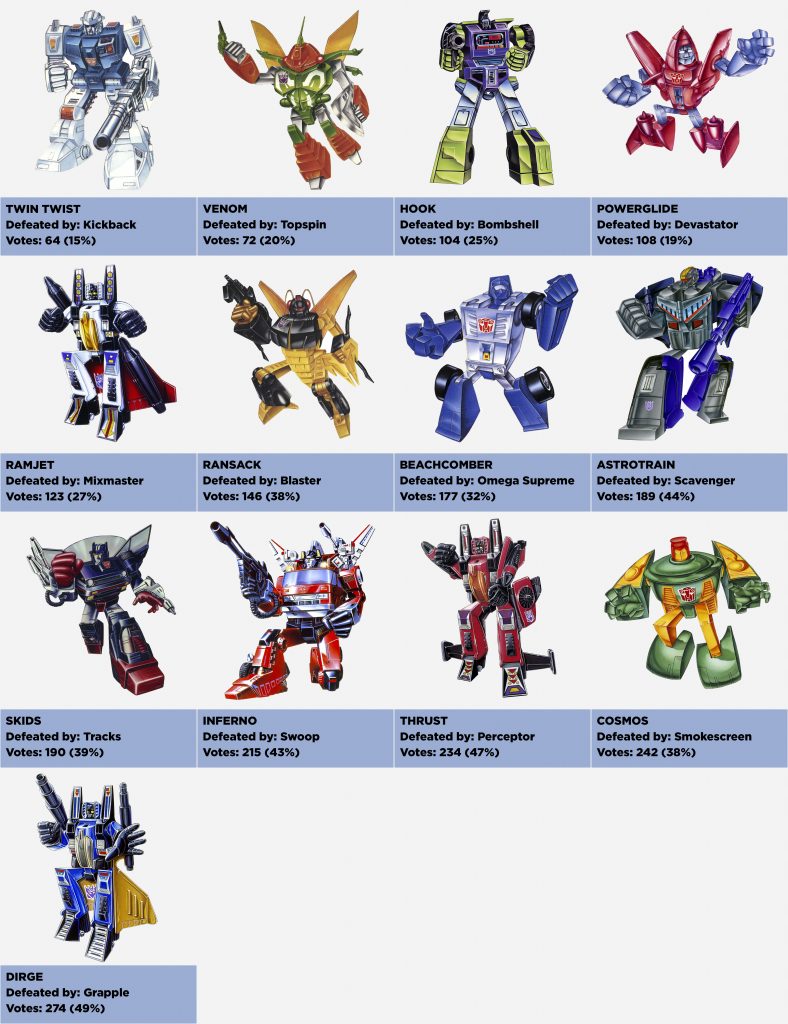 As we go through each round, we’ve listed the characters that were kicked out through being defeated by another contender and ranked them by how many votes they clocked up. That tends to mean that round 1 is a list of the… less desirable pieces of artwork in any particular league, and 1985 certainly has a few doozies, although there’re a couple of real treats in there too! Twin Twist and Venom both racked up an embarrassingly small number of votes, but for my money it’s Powerglide that is the real oddball here. Meanwhile it’s a shame that the likes of Skids and particularly Inferno weren’t able to make it further along in the competition. However, someone needs to be out in the first round and that’s just the way it is! Oh, and Dirge losing was one of the closest run polls we’ve had in any league so far, with Grapple winning by a mere 12 votes! I do love it when they come that close. 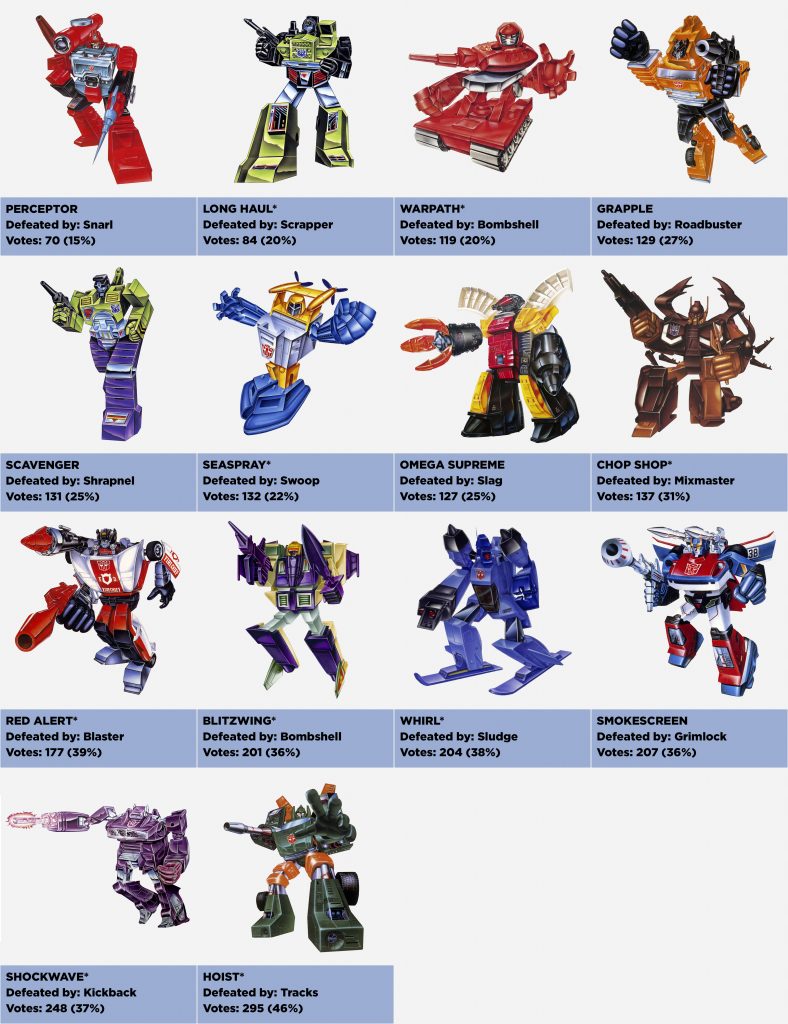 Because of the way single-elimination knockout tournaments work, the number of competitors in round 1 needs to be a power of two, which can mean that some of them are given “bye” status and automatically assigned to round 2 to make the bracket numbers work (these characters are indicated with a * in the diagrams shown). In 1985 this meant we had a larger round 2 that normal (just the way the maths worked out), leaving us with a number of low-rated competitors here too. The “curse of the Minibots” continued, with the likes of Warpath and Seaspray hardly managing to make a dent. Meanwhile popular choices like Smokescreen and Hoist were kicked out after going up against some of the strongest contenders this year. Had it worked out differently they maybe could’ve gone further but it was not to be! 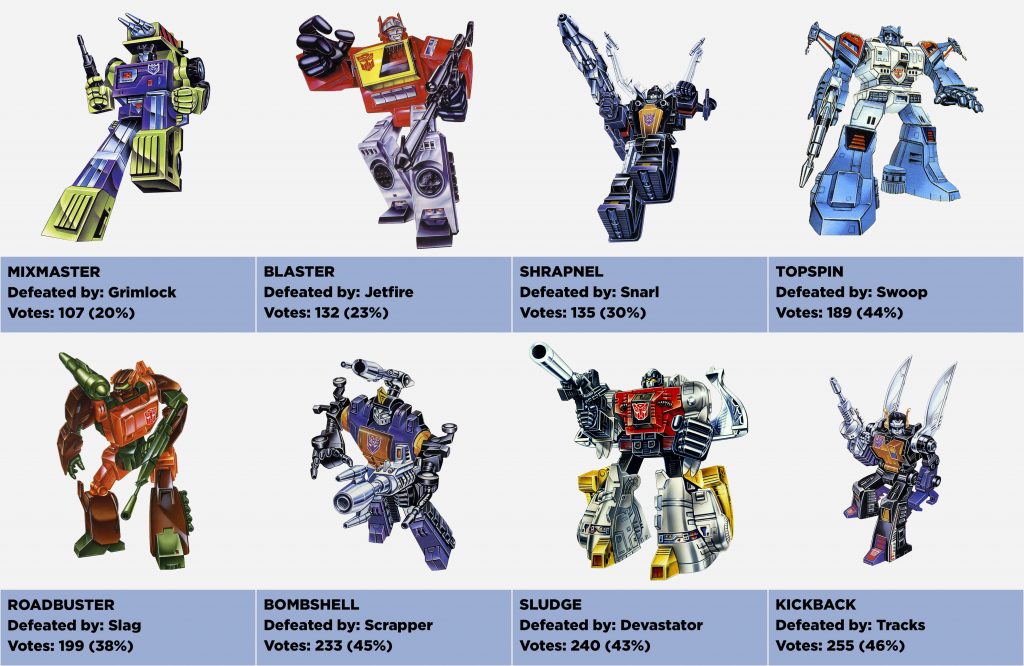 By round 3 of 1985 it was becoming more clear who the popular choices for the top spot were, with the Dinobots continuing to put in a strong showing. Sludge being knocked out by Devastator was definitely a bit of an upset for some (and meant that we didn’t get to see the complete team moving forward), whilst many people speculated that Jetfire (drawn by Mark Watts, who also did the Minibots) would’ve been knocked out at this point if he’d faced stiffer competition than Blaster. Who’s to say?

Nothing defeats the Devast– oh, yeah, he’s gone. Meanwhile, despite Slag’s defeat, it continued to be Dino-dominated elsewhere, with Grimlock, Swoop and Snarl all moving through. The real upset in my opinion though was Tracks (TRACKS!) being knocked out by Jetfire. I very much try to remain impartial when setting up these polls, but this one stung.

Lots of people commented that they would have loved to have seen Grimlock take on Snarl in the final, but ultimately this match-up came to pass in the semi-finals instead and the Dinobot leader was out! Jetfire secured another win to make it through to the final, but was finally beaten by our new champion. 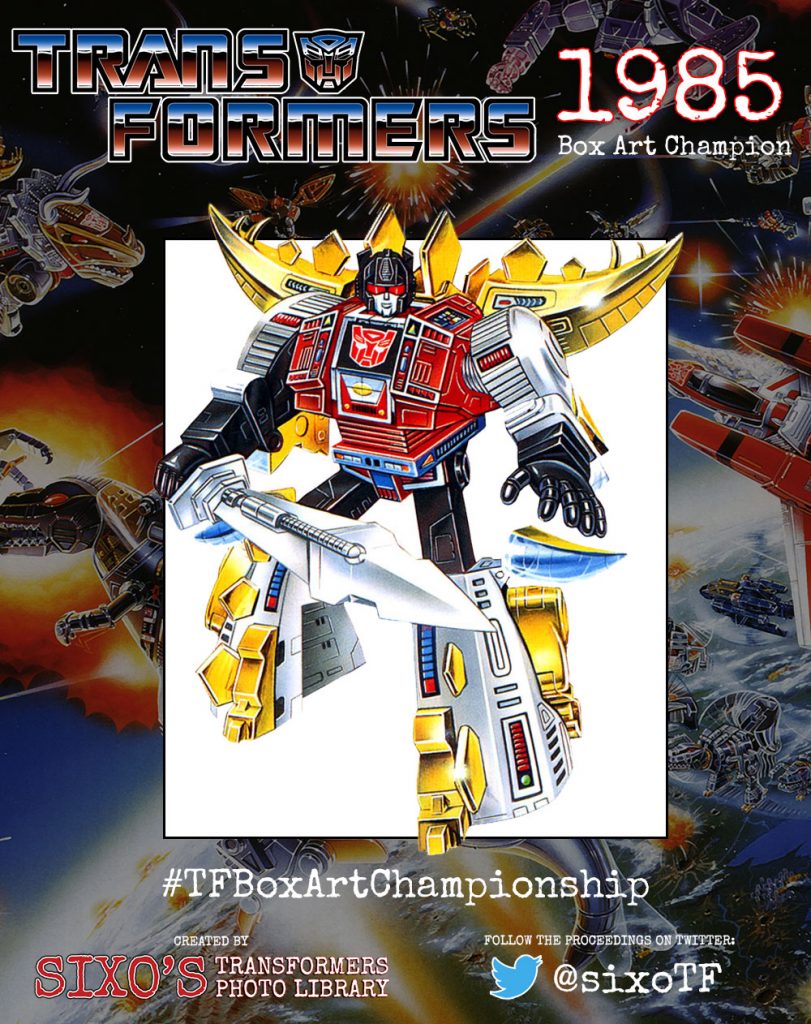 In the end it was Snarl that won it, taking home 64% of the vote and rightfully earning a place in the #TFBoxArtChampionship hall of fame!

And with that, we were done! Here’s how the finished 1985 championship looked. 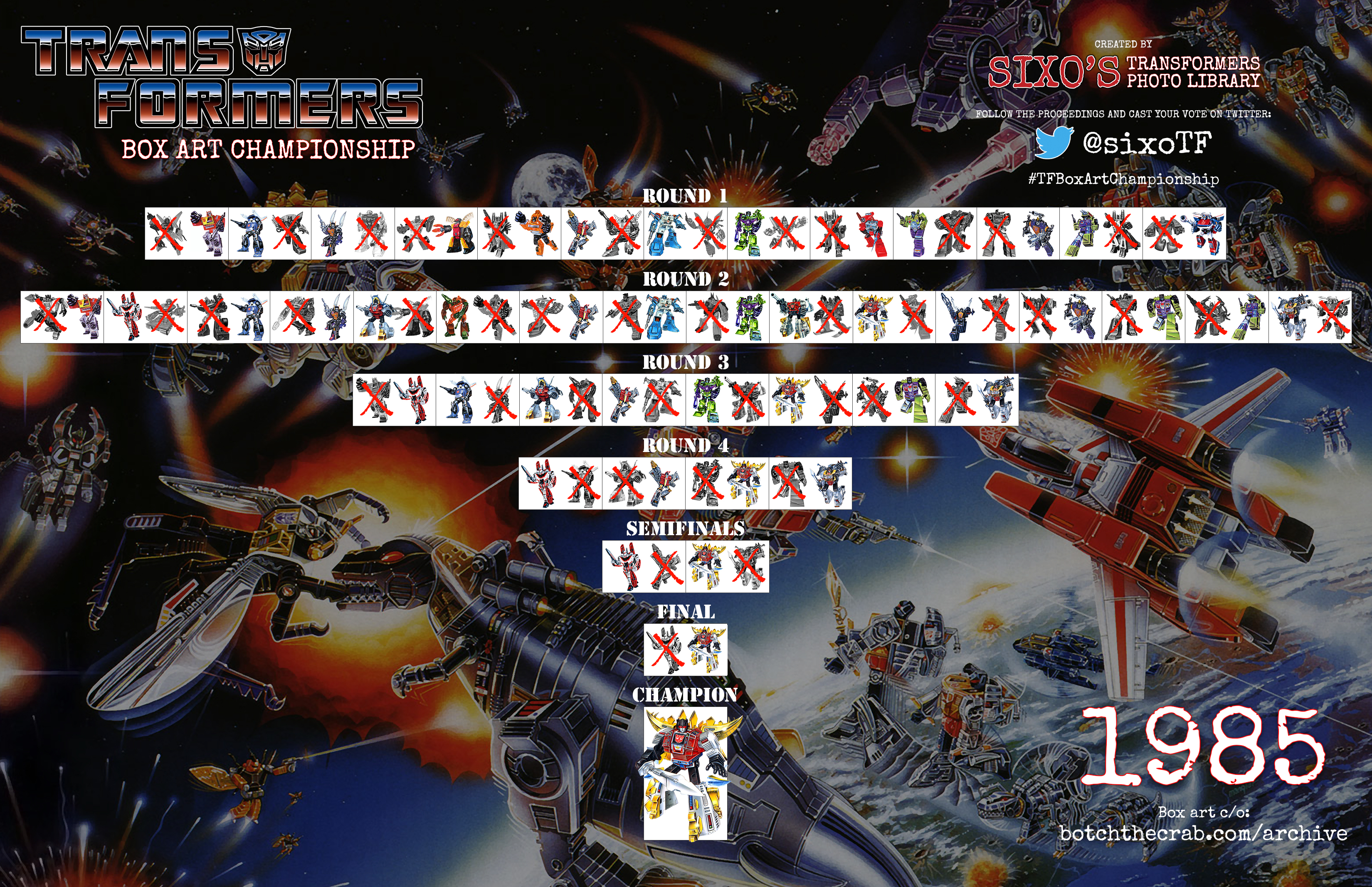 Of course we didn’t rest on our laurels, as we jumped straight into the 1986 league… let’s take a look!

Oh boy, 1986 got everyone talking. It was noted that the general quality of art was maybe not quite on a par with what people had become accustomed to from previous years and especially not versus some of the handed-down Diaclone drawings. It perhaps didn’t help that with so many more characters (a whopping 60 instead of 45 from 1985 or just 28 from 1984), the perceived dip felt that much larger! The first round of 1986 was pretty much a bloodbath, with plenty of comments calling out some of the weird artistic choices on display. Notable examples included the jutting fists and feet everywhere, the weird proportions, the awkward facial expressions and some of the bizarre poses. Consequently a lot of contenders only achieved small numbers of votes, although there were definitely some that found surprising levels of support! With 400 votes, Ultra Magnus remains the most popular losing character from any poll of any year so far, so much so that he would have beaten 75% of winning characters in any other battle. Weird. 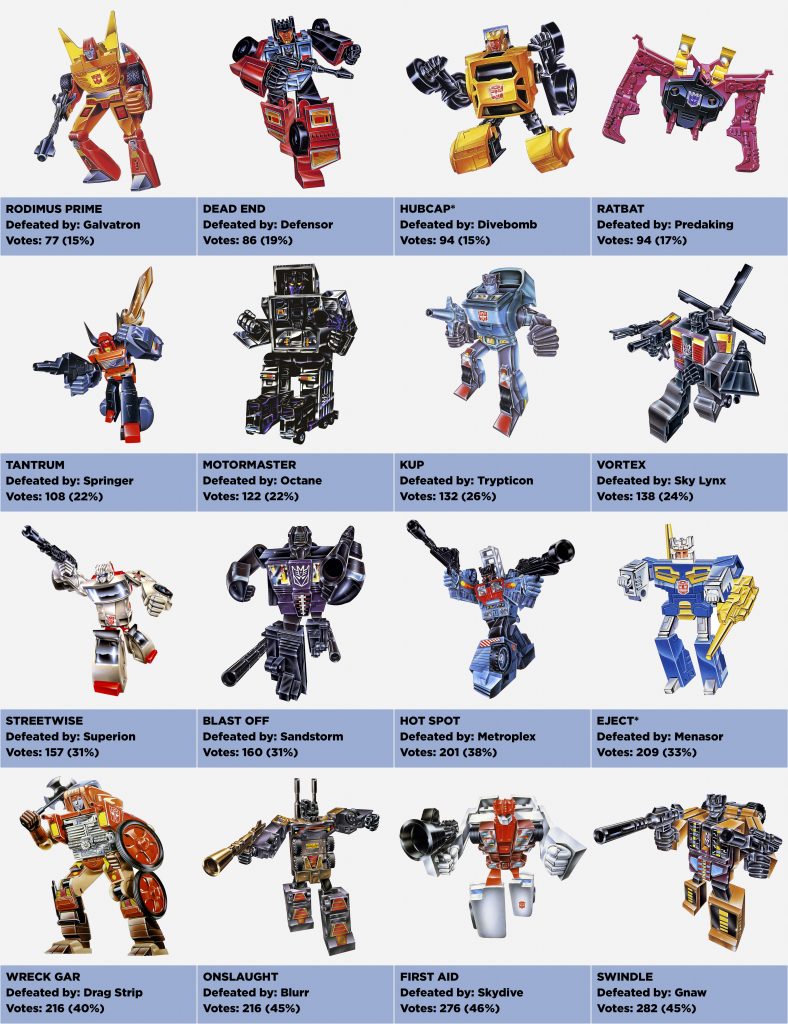 By the end of round 2 it certainly felt like we’d been on a journey! With so many characters to get through there were still a lot of easy knock-outs in round 2, although by this point it was already becoming very clear who the early favourites were. Characters like Galvatron, Defensor, Sky Lynx and Predaking continued to dominate proceedings, whilst none of the lads above ever really stood a chance! 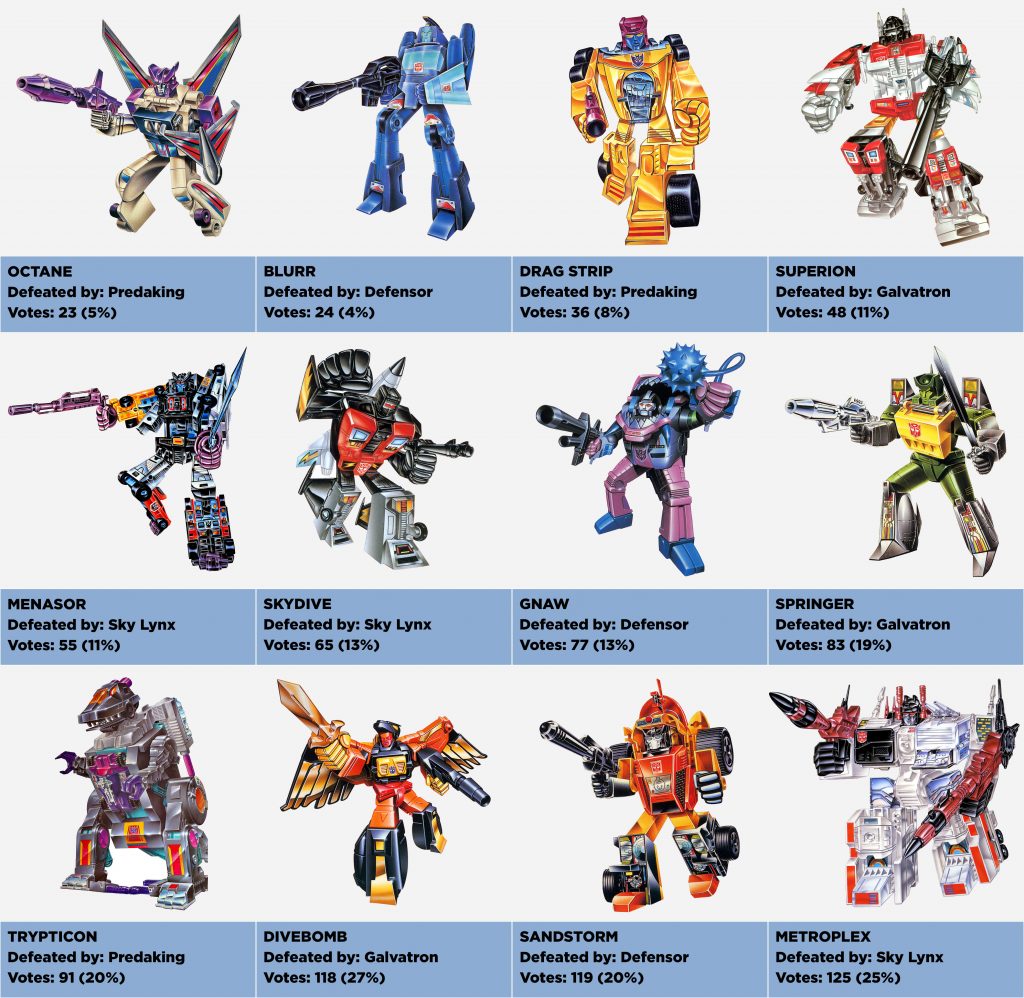 For round 3 we added a surprise twist! What was originally billed as two rounds became just one, and instead of having two challengers per battle we had four four-way fights! It made for an interesting shake-up to the proceedings and meant that the characters above all had to sing for their supper against multiple opponents. Ultimately it made for a lot of quick knock-outs and left some contenders with exceedingly poor vote counts, such as the 23 people who voted for poor Octane. Oh and Menasor was finally knocked out, much to many people’s satisfaction!

After the four-way battle twist we were left with just a handful of challengers to go, and to be honest it seemed like it could be anyone’s at this stage! The semi-finals saw both Galvatron and Sky Lynx fall, leaving just an Autobot versus a Decepticon combiner to battle it out for the top spot. 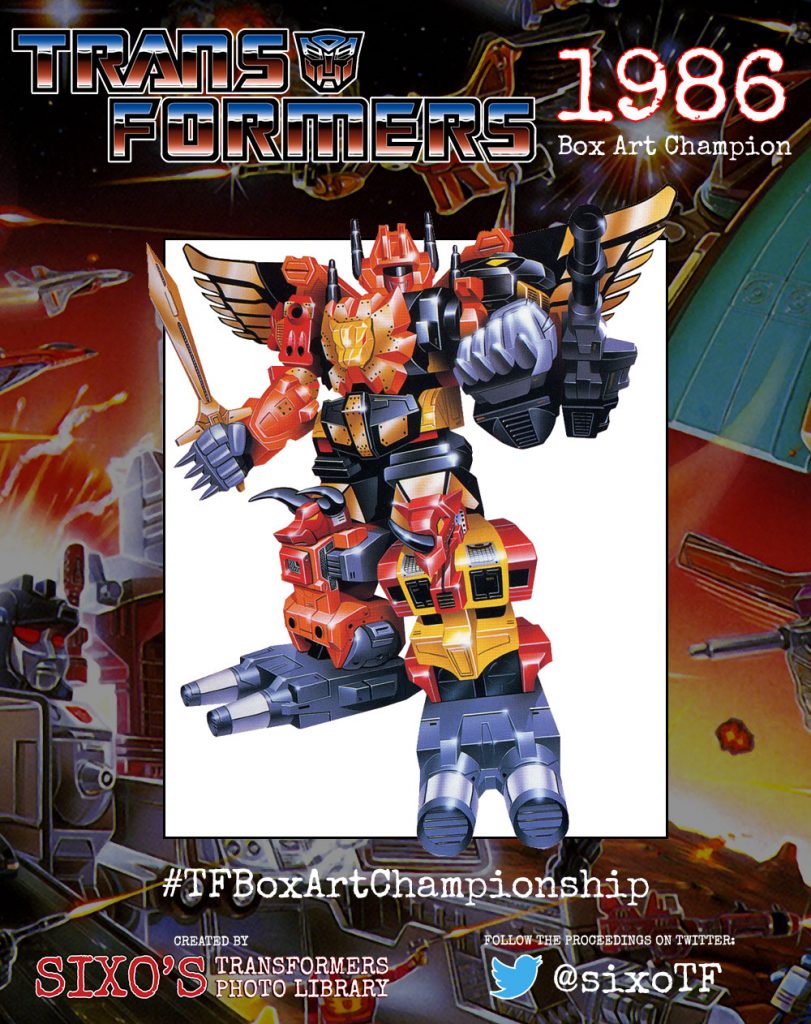 Finally Predaking was announced as the overall 1986 winner with a decent 66% of the vote, securing a spot in the #TFBoxArtChampionship hall of fame!

1986 was a bizarre year for sure, but still a lot of fun with some very memorable moments! Here’s how it ended up. 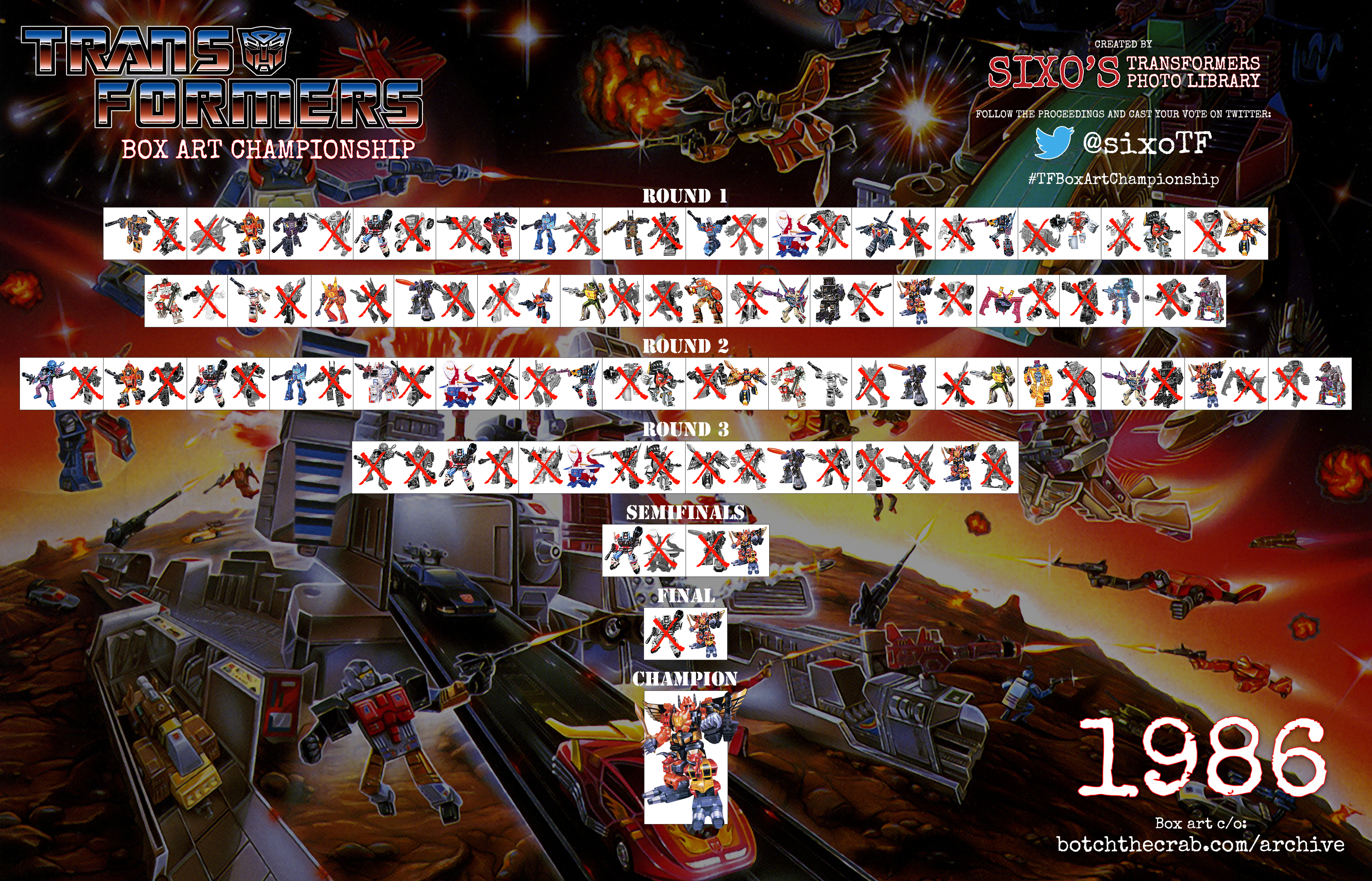 So there you have it! We hope you’ve enjoyed this walk through the second part of our box art league and will return to join us in two days time, as on Friday we’ll be looking back at the action from the 1987 before unveiling the new 1988 league. Hope to see you then!

BOX ART BREAKDOWN: all the action from the 1985 & 1986 #TFBoxArtChampionship leagues