BOX ART BREAKDOWN: the #TFBoxArtChampionship explained – plus all the action from 1984 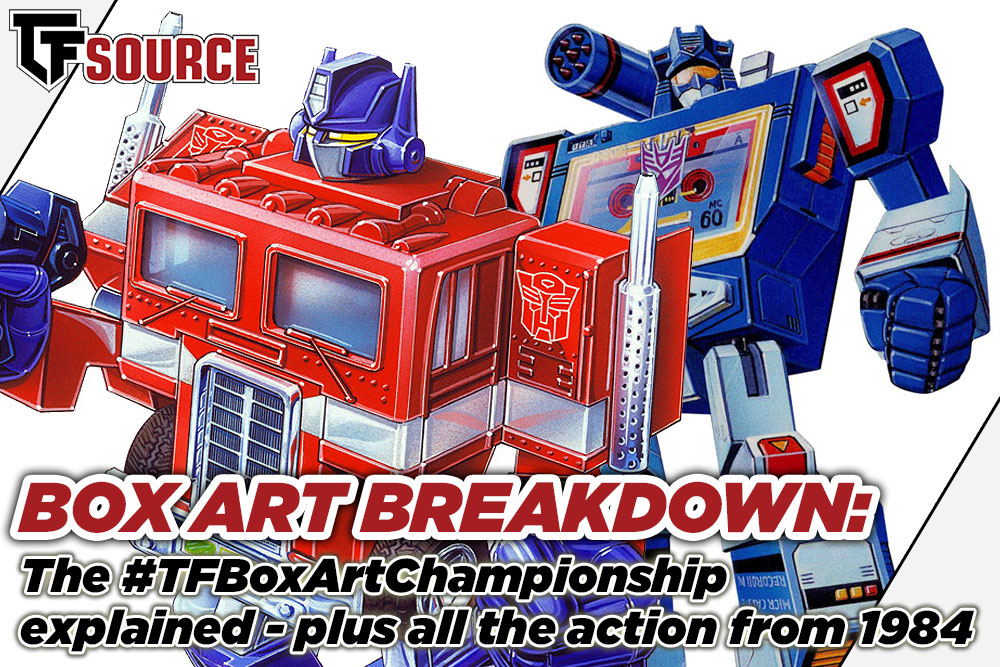 Exciting news – we’re about to begin a new round of the Transformers Box Art Championship! But what is that and why should you care? Well, that’s what we’re going to be covering today, you lucky things. If you’ve been following the hashtag #TFBoxArtChampionship on Twitter then you’ll already know of the action, the suspense and the excitement involved, but if you’re new to the proceedings then there’s still time to catch up before the 1988 league begins this coming Friday.

Before then we’re going to be taking you through the highlights of the four leagues thus far, starting today with 1984 after we cover some basics of the championship itself.

So, what’s the deal?
Well, it all began as a way of having a bit of fun but also celebrating some of the wonderful packaging artwork from the Transformers toyline. Many of the character depictions found on the toy boxes represent fond memories for those of us who grew up in the 1980s with the original TF toyline, and fans who have discovered them since have found similar enjoyment. So a championship league was designed which features daily battles between two contenders in the form of a poll – simple!

Who has the best box art in your opinion – TRACKS vs KICKBACK? Vote using the poll in the next tweet…#TFBoxArtChampionship pic.twitter.com/9DGCMjEjWr

The winner in each poll advances to the next round of the competition and takes on a new challenger another day. Eventually one contender beats all of the others and is crowned the winner for that year. The polls are typically run every day and last for 24 hours each, so there’s plenty of chance to get involved.

So I just judge each poll based on the art, or what?
A lot of people ask about the “criteria” for how they should be choosing a winner, and whilst yes, in theory it should be based on the art, there’s no hard and fast rule on that. It’s natural that some characters speak to us more than others (especially if we have fond memories of owning that toy as a child, for example). And whilst I get a fair few comments saying that people only vote for the popular characters but the evidence doesn’t support this. You’ll note that both Optimus Prime and Megatron, the two most recognisable Transformers of all time, were voted off in the second round of the 1984 competition, for example, so I think all told it balances out. At the end of the day though it’s supposed to be fun, so just vote however you want!

Does it ever end in a draw?
It’s seemingly impossible for it to, given the way Twitter’s poll system works, but we’ve come very close! The nearest to a draw so far was Blot vs Hardhead in the second round of the 1987 league, with the Terrorcon only nabbing victory with 51% of 657 votes overall. Prior to that it was Grapple vs Dirge in 1985 round 1 with a similarly close result.

BLOT wins! This was a close one (the closest so far in 1987!), but the little Terrorcon prevails with 51% of the vote after a fairly inspiring online campaign. Well done, Team Blot. He now faces Highbrow in round 3! Next poll below…#TFBoxArtChampionship pic.twitter.com/wvRlhzMmpm

How long will this go on? Will you do beyond Generation 1?
It’ll carry on for as long as people enjoy it, I guess! The response to 1984 was so positive that moving to ’85 and beyond seemed inevitable at the time. If that positivity continues then we could do Generation 2, Beast Wars, Machine Wars and beyond… there’s even been an idea to do a kind of “All Stars” league where the winners from different years face each other.

OK, I’m convinced – how do I follow the action?
You can check it out on Twitter by either following me, @SixoTF or check out the hashtag #TFBoxArtChampionship to see the latest happenings. You will need a Twitter account to vote. HOWEVER – big news! Starting with the 1988 championship the voting will be extended to Facebook… more news on Friday.

So, with that all cleared up, let’s take a look back at our first championship, shall we? It was all about 1984! The TF toyline took the world by storm, and no doubt a large part of that was the exemplary packaging artwork on display, which truly captured the imagination of small children and brought these characters to life. Given that all of the toys from the ’84 line was passed down from other toylines it’s perhaps no surprise to discover that much of the character art was too, although not all of it. The paintings for characters such as Starscream, Hound, Wheeljack, Bluestreak and Prowl were all recycled from Diaclone, whereas the ones for Megatron, Soundwave and the Decepticon cassettes came from Micro Change.

There were some toys that didn’t possess previous artwork however, and so Hasbro did create plenty of new paintings for the first TF wave of toys. Jeffrey Mangiat is credited with bringing to life Optimus Prime, Jazz, Mirage and some of the Seekers, whereas Richard Marcej created the Minibots depictions. All of it worked together to give 1984 its distinctive vibe, which would set the blueprint for TF packaging artwork for the remainder of Generation 1 (and beyond).

Let’s take a spin through how each of these pieces of artwork fared in our 1984 championship league. 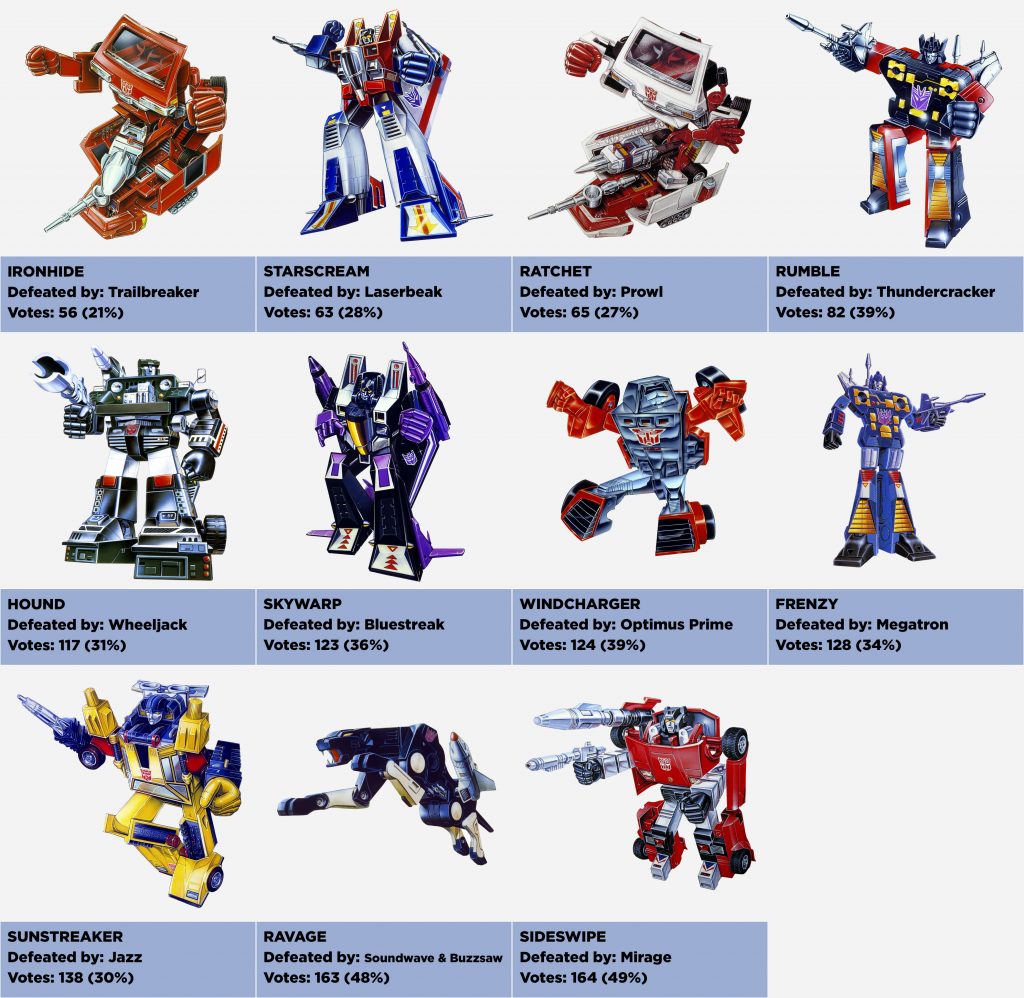 As we go through each round, we’ve listed the characters that were kicked out through being defeated by another contender and ranked them by how many votes they clocked up. The #TFBoxArtChmpionship was still attracting an audience at the time so the most votes any battle clocked up was Sideswipe vs Mirage with 164, which means none of these lads did particularly well in terms of votes overall despite some great artwork on show!

Ironhide definitely came off worst of all, which is perhaps not surprising given how he and Ratchet differ so much from their cartoon models (not having traditional heads and all!). Starscream was a surprise knock-out however, whilst Windcharger set the tone for the Minibots to follow (more on that below). The biggest surprises here though were Sunstreaker, Ravage and Sideswipe all being defeated so early on. Ravage and Sideswipe came very close, with 48% & 49% respectively, but someone has to go in round 1 and it was their time. 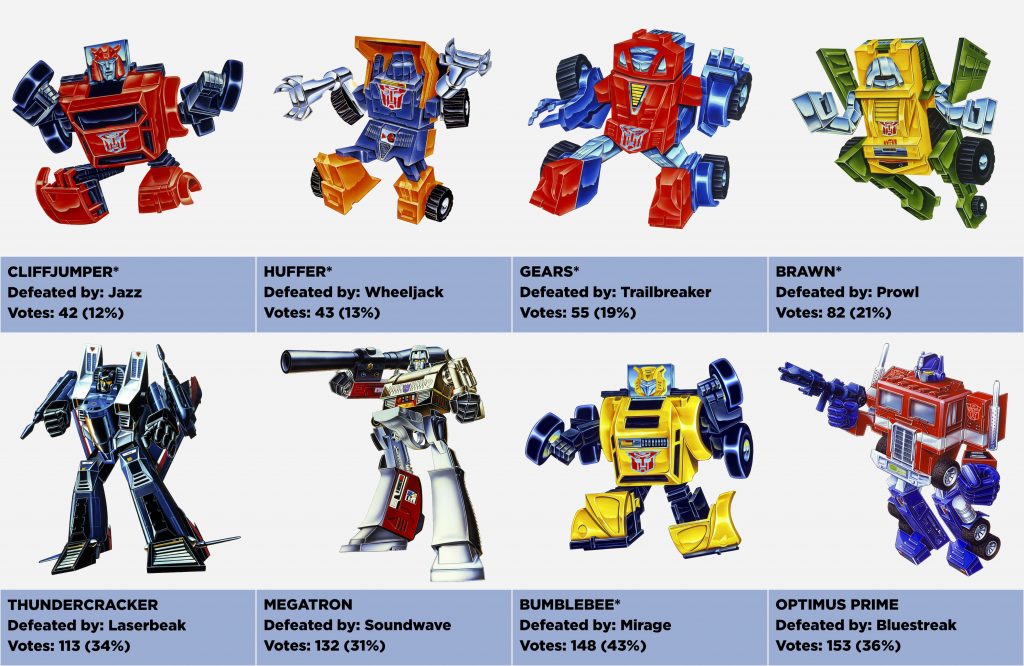 Because of the way single-elimination knockout tournaments work, the number of competitors in round 1 needs to be a power of two, which can mean that some of them are given “bye” status and automatically assigned to round 2 to make the bracket numbers work (these characters are indicated with a * in the diagrams shown). In 1984 this status was given to the majority of Minibots, which meant that when they were suddenly introduced to the competition… well, it wasn’t pretty. OK, it was a bloodbath. Minibots limbs everywhere. Cliffjumper, Huffer, Gears and Brawn were decimated in a run so poor that it felt like the 1986 movie all over again. Bumeblebee gave a better showing but ultimately still fell at the hands of Mirage. Meanwhile big hitters Megatron and Optimus Prime were kicked out surprisingly easily, proving that all bets were off.

With just four battles in round 3 things had really heated up by this point! Mirage, previously so successful, was obliterated by Soundwave, with Trailbreaker doing little better against Wheeljack as the popular choices were starting to emerge. Jazz had been an early favourite for a lot of folks but was ousted by Bluestreak without too much trouble.

The semi-finals were over in a flash and before we knew it both Bluestreak and Prowl were cast aside, whilst it all lined up for a grand final of Wheeljack versus Soundwave. Battle lines were drawn, families were divided… it was epic stuff. 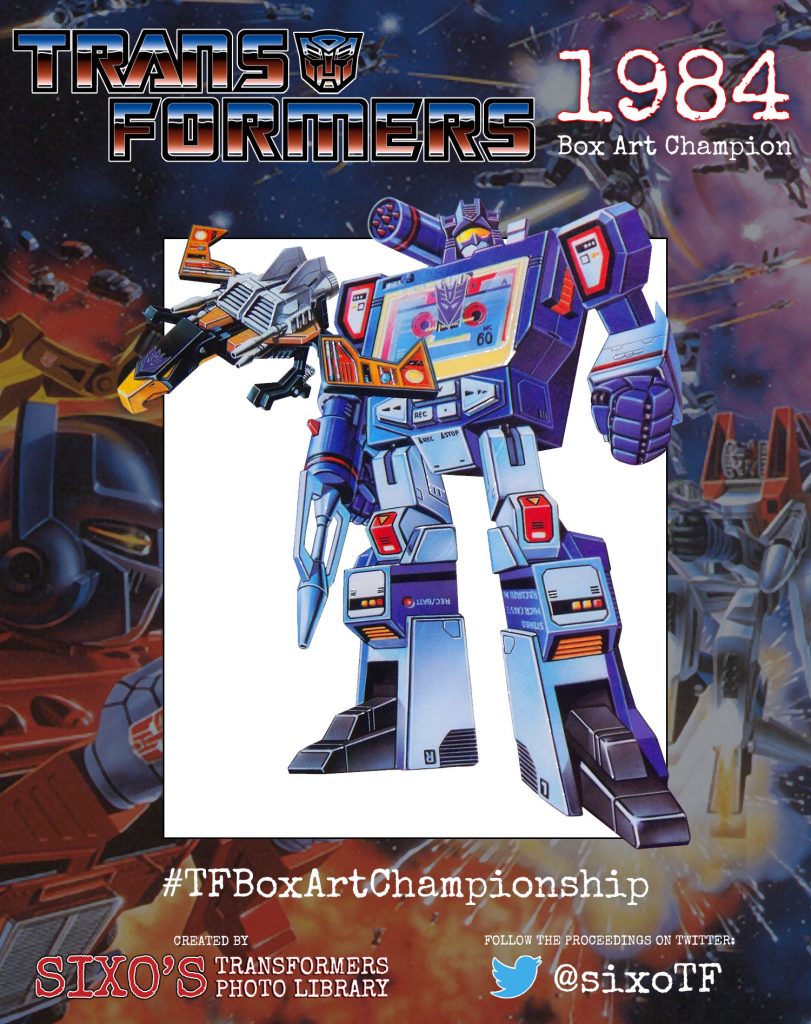 Soundwave (and Buzzsaw, mustn’t forget him!) was crowned the overall champion for 1984 in an epic showdown which drew the most votes (at the time) of any battle so far, with 66% of 596 people crowning the Decepticon tape player as the winner and earning him a place in the #TFBoxArtChampionship hall of fame! It’s a deserving win, for sure.

IT'S ALL OVER! The final votes are in and SOUNDWAVE has been crowned the Box Art Champion of 1984! He won with 66% of the vote, making him the decisive winner. Sorry, Wheeljack fans!

And with that, we were done! Here’s how the finished 1984 championship shaked out. 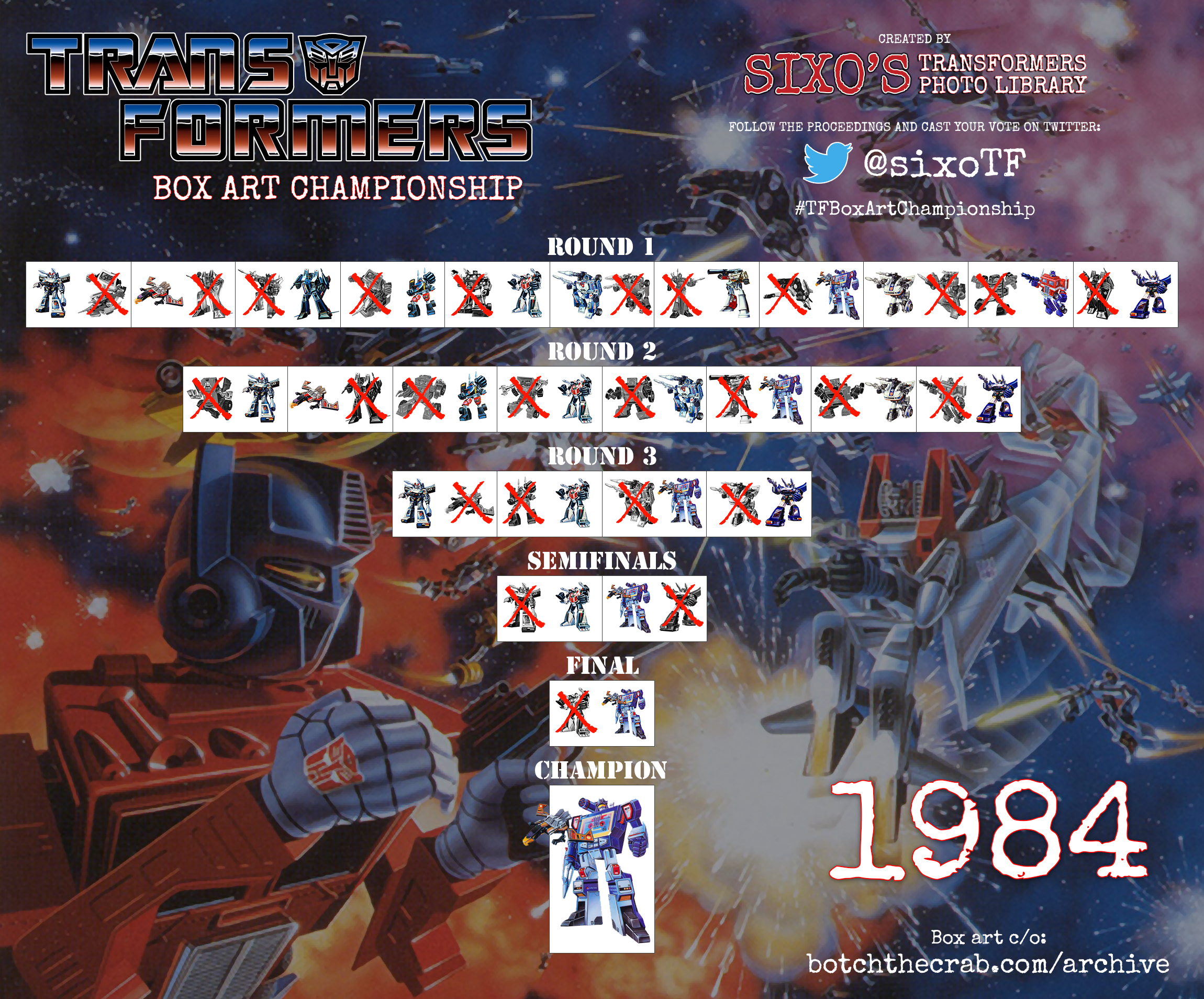 So there you have it! We hope you’ve enjoyed this walk through the first part of our box art league and will return to join us in two days time, as on Wednesday we’ll be looking back at the action from the 1985 and 1986 leagues before we’re back again on Friday for the final part with 1987 and an introduction to the new 1988 league. Hope to see you then!

BOX ART BREAKDOWN: the #TFBoxArtChampionship explained – plus all the action from 1984