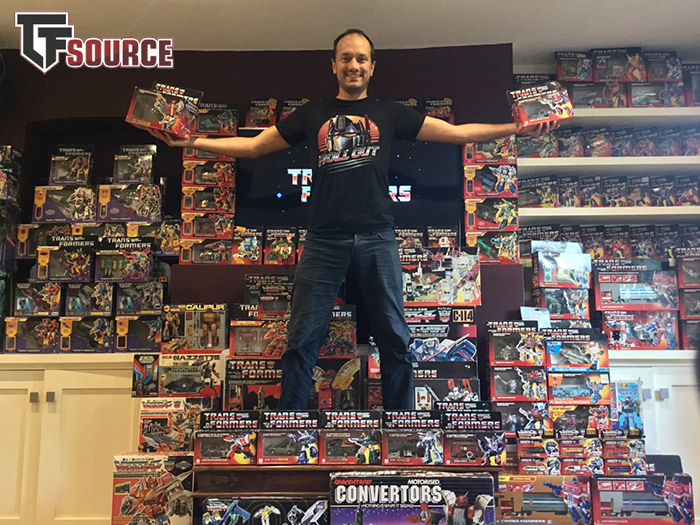 It’s been many months, but we are BACK with another collector interview for the TFSource Report! And speaking of things that are overdue, I’ve known UK-based Transformers collector Tim Bannerjee for over 15 years, having been introduced to him originally in order to document an astonishingly rare G1 variant he had owned since childhood. Tim has always been an approachable, giving and positive member of the G1 TF community, as well as a regular at conventions around the UK for as long as I have been attending them. I actually had to ask for his forgiveness seeing as how I had neglected to shine a spotlight on his collection all these years. However, I’m glad I waited until this moment, because the results are – as I am sure you will agree – quite breathtaking! Tim has stuck to what he loves, brought real focus to his collecting, survived an episode with a peregrine falcon and bought rare items wisely before a time that they became inaccessibly expensive. In fact, his entire journey has been worth it for that opening interview photo alone! Take it away, Tim. 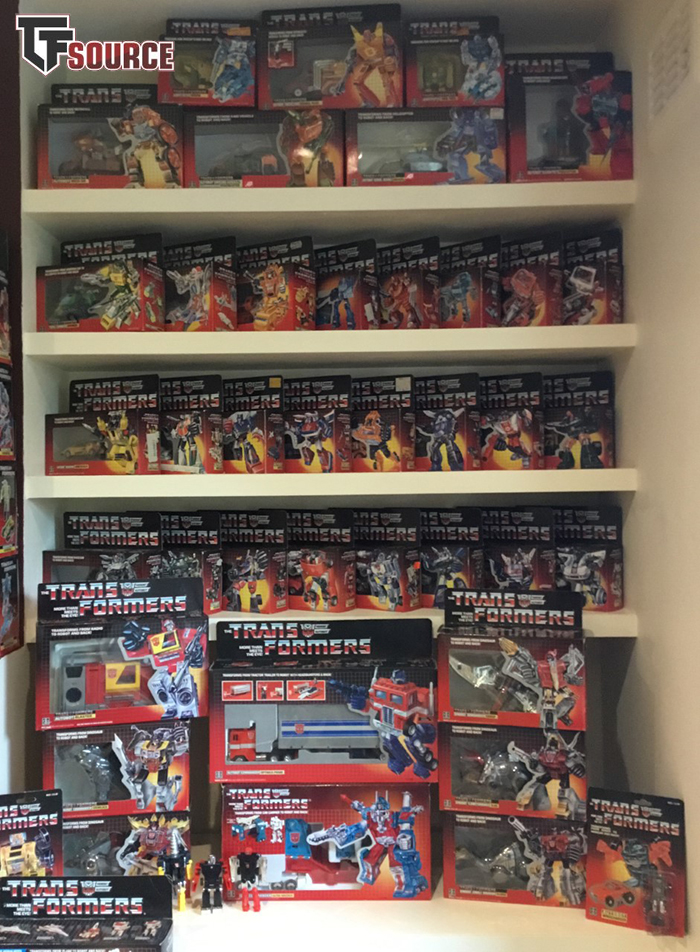 My name is Tim Bannerjee and right now I’m focusing on collecting the boxed / carded Transformers from 1984-87. I say ‘right now’ because for me has been a constantly changing hobby.

As with most collectors of my era, G1 toys and comics were a fond part of childhood. Sideswipe, Bluestreak and Skywarp started my obsession, which as I suppose is common, dulled as one goes through that teenage phase thinking it’s time to be ‘cool’ and grow up.

Then in 1998 two things happened. Firstly, a good mate of mine dragged me to a toy fair in Westminster (London) where I saw tables covered with Transformer goodness. Secondly, I was persuaded to watch Beast Wars. Forget ‘growing up’, the show and toys were incredible; I had no choice but to embrace my inner ‘geek’. I started adding to the G1 stuff I had fortunately kept, collecting Beast Wars, swiftly followed by TF2000 / RID which brought new Autobots and Deceptions into my life for the first time since childhood.

I messed about with pretty much all ranges from 2000 – 2007, but over the last 5 years scaled back to upgrading my G1 collection and aiming to complete Beast Wars and TF2000 / RID. It’s these ranges that represent key points in my journey through geeksville so far. 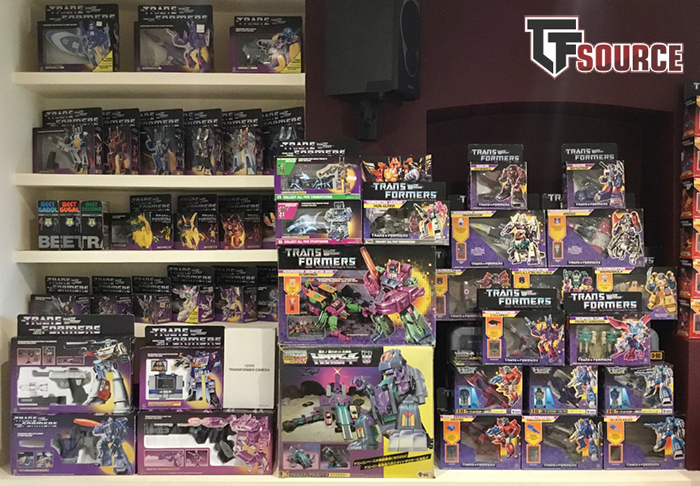 2) How has the collecting scene changed in the last 15 to 20 years?

Drastically, for the better I’d say. The collector’s market is now truly global, with opportunities to swap, trade, bid, shop and hunt for items from all the corners the world having never been greater.

In 1998, to me it felt like Transformers were in kind of a niche space, now they’re much more mainstream. The run of live action movies, new cartoons, comics, reissues and revamps give us all so much to choose from. I’m not sure I can think of another toy range (apart from LEGO perhaps) that has not only stood the test of time, but continues to evolve so successfully. It’s great to see how time has brought collectors of all ages along for the ride. 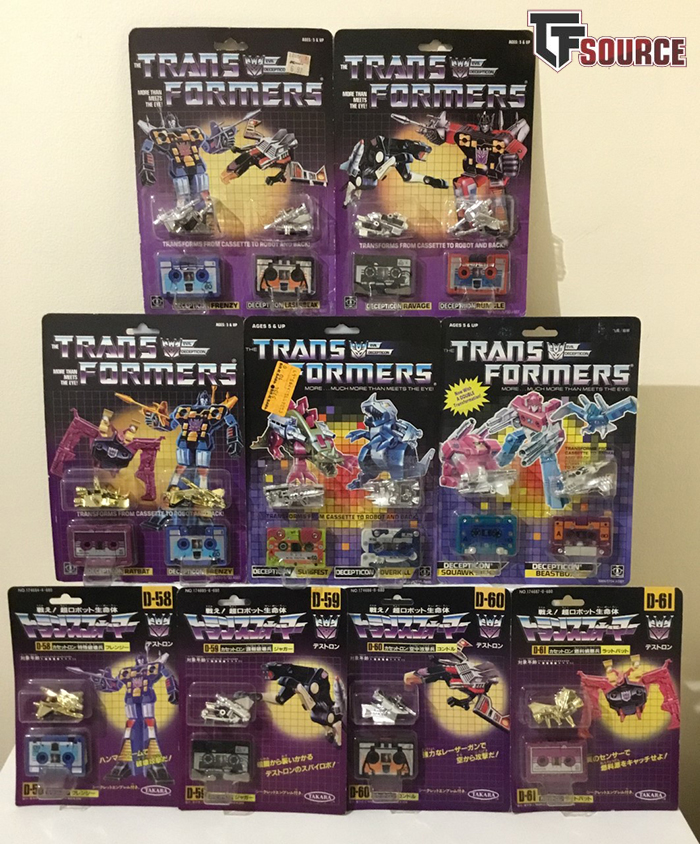 I’d really like to see the evolution of the brand continue, and as long as the powers that be keep the bandwagon rolling with new movies and news toy ranges, I don’t see any change in momentum. For the ranges I collect, I do think it’ll become trickier to locate the ‘harder to find’ rare items, many of which are safely in the hands of collectors that quite understandably don’t want to sell or trade them on. I’m fine with that, though, there’ll always be plenty to keep me entertained. 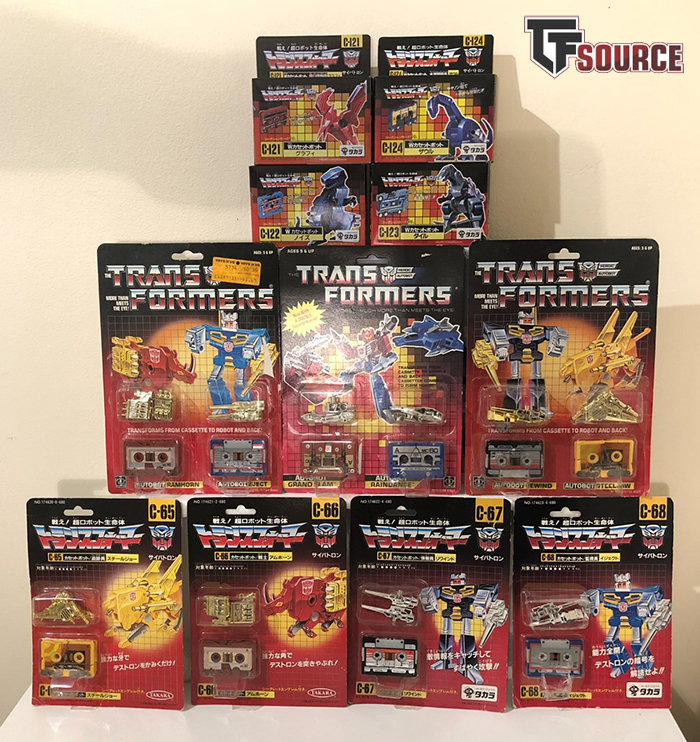 I thought this was going to be tricky to answer, but in fact it was quite easy when I really thought about it. The biggest frustration I had as a Transformers-obsessed child growing up in the UK was the wealth of characters that either showed up the comics and cartoons, but didn’t get a mainstream UK release. We’re talking Swoop, Shockwave, Devastator, Blaster, the Autobot cassettes, Fortress Maximus…the list goes on. To make it worse, they were on the glossy box artwork, heck they even included them in the product leaflets that came with the toys. 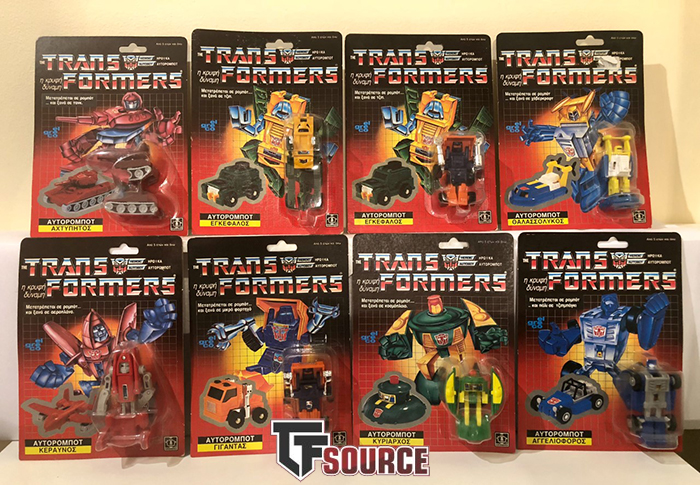 As a kid I was convinced that these toys didn’t exist. Skip forward to 1999 when I signed up to eBay and saw pictures of some of these toys for literally the first time. Could I really get a Swoop from a seller in Canada?

No PayPal back then, but 4 weeks after sending an international money gram, there was s G1 Swoop in my hands. That was my first eBay purchase and to this day I have no real idea why my Swoop has a blue face rather than the normal black and silver. Whatever the reason, the fact that this was my first venture into the world of the previously unobtainable, and the fact that it’s a bit of an oddity, means old ‘beaky blue face’ will always have a special place on my shelf. 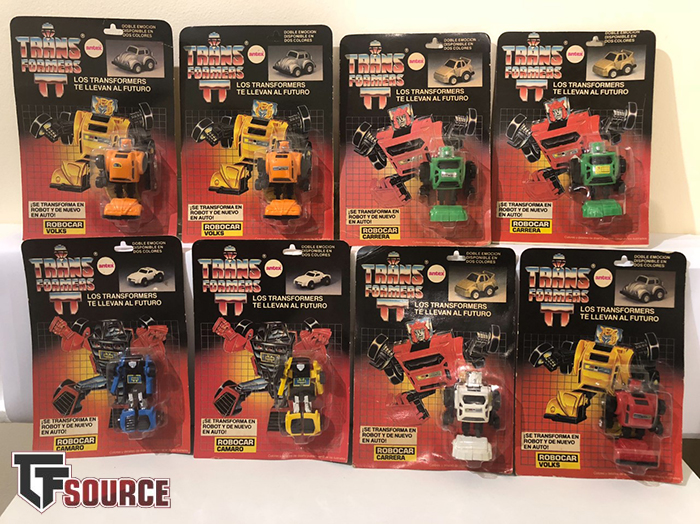 I don’t know if I can nail it down to one specific instance, but whenever I hear about case finds of 80’s stuff, my jaw drops. You would have thought that 35 years after their initial release, G1 case finds would be a thing of the past, yet we still see them cropping up now and again. Whenever I hear of people that have cases of Jetfire, TM Scourge and TM Cyclonus, see old ‘shop stock’ Japanese cassettes or case fresh Micromasters, it’s a bit of a wow moment.

Then there’s this episode. Over the years, the world of collecting has thrown up the weird and wonderful. Not sure how many fellow collectors have been accosted by a bird of prey in their ventures. It took a while for my nerves to recover from the fright of having a peregrine falcon bare its talons and screech in my face without warning when visiting a fellow Transformers collector, who as it turned out, was also a killer bird enthusiast! 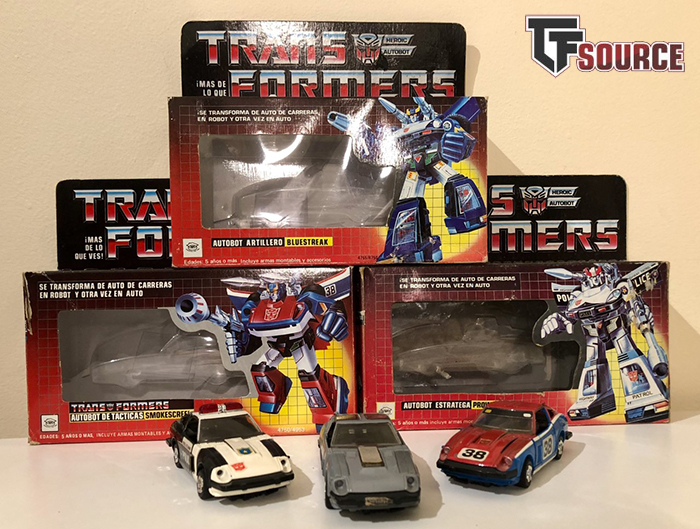 I’m going plump for my Mexican G1 Plasticos IGA Smokescreen (“Smokestreak”). It’s the hate-love journey that started in the mid 80’s that makes it special for me.

Transformers were always quite expensive toys, but it so happened that there was a small independent toy shop locally that sold them significantly below high street prices. This was mainly because they were imported from Mexico, meaning that several of the figures that made it into my collection would otherwise not have done so (Devastator, Prowl, Hound and Smokescreen). Whilst I was over the moon to get a Smokescreen, I can clearly remember being annoyed that mine was different to those in the pictures. It had a basic looking black front bumper rather than a cool chunky one and simply didn’t look as good. When I started collecting again, I even bought a junker with the intention of finally kitbashing it to make it look ‘right’.

Back then, the only way I had to find out more info on these things was to take items to conventions to pick fellow collectors’ brains. It took a while, but I finally bumped into Maz, who introduced me to one of the early TF online groups, where after 15 years of being perplexed, I was finally able to get some background information.

It’s the fact that IGA Smokes is a childhood present, and the journey to understanding its origin, that makes it special to me. 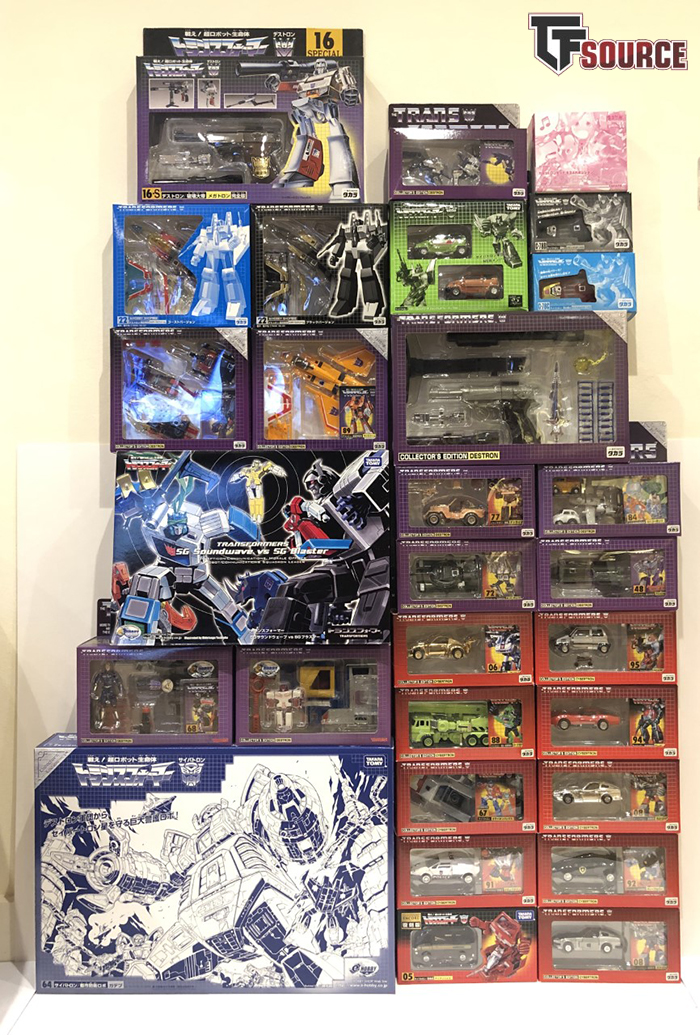 If there’s one item that I’d love to own that I fear will remain out to reach, it’d be a boxed Milton Bradley red Tracks. Quite simply, Tracks is my favourite Autobot car; the robot and alt modes are incredible. He’s red on the back of the G1 boxes, and whilst I’m lucky enough to own the e-Hobby reissue exclusive Road Rage and Diaclone versions, an original G1 red Tracks is just a thing of awesomeness. I don’t know the names of any owners, let alone anyone willing to part with one, but if you’re out there and you have a little red corvette that needs a home…

Enjoy the hobby and go with the flow. Aim for the items that simply appeal to you, don’t worry if they’re from different lines. There’s so much out there that it’s hard to decide where to focus, but let time decide that. I would say don’t collect for value (unless that’s what you enjoy), it’s very hard to predict which items will increase the most, and unless you intended to sell items on, does it really matter? 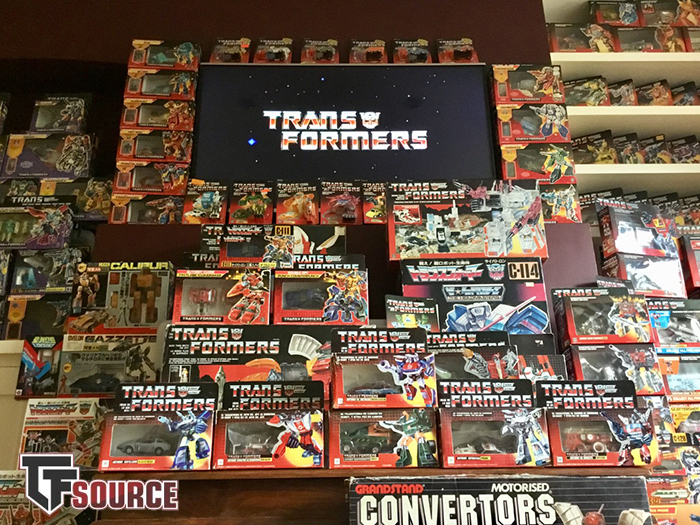 Many kind and gracious thanks to Tim Bannerjee for words and photographs.